During our journey through northern England, en route from the Lake District to Edinburgh, we decided to pause for the afternoon to enjoy a walk along a section of Hadrian’s Wall. Built under the direction of the Roman Emperor Hadrian around 122 A.D., the military fortification was intended to prevent ‘barbarians’ from the north from entering Britannia (Roman Britain). Originally stretching 118 kilometers (80 Roman miles; 73 standard miles) from northern England’s east to west coasts, the wall boasted some 80 milecastles (small fortifications set every mile) as well as 17 large forts. Construction of the massive stone barrier took some 15,000 men nearly six years to complete, with the completed wall standing some 5–6 meters (15–20 feet) high. Surprisingly, the military zone was abandoned less than a quarter century after its completion, following the death of Hadrian (the succeeding Emperor decided to build a new wall further north). Today, the ruined wall (both restored and unrestored) still stretches across most of the width of northern England, with small footpaths running its length – offering miles and miles of historic ruins and scenic countryside to history buffs and casual hikers alike.

As we navigated a portion of rural road towards Steel Rigg, our chosen starting point for our historic walk along Hadrian’s Wall, we managed to spot seven pheasants within about a three-mile stretch of road (I’d been keeping an eye out for the colorful birds for weeks). Being the undeniably sedate and mature adult that I am, I would excitedly squeal, ‘pheasant! Pull over!’ from the passenger seat each time I sighted one of the regal birds. Poor Stephan would, in turn, startle right out of the driver’s seat, mutter something about ‘holy shit,’ and dutifully swing over to the shoulder so we could attempt (most often unsuccessfully) to get a shot of the skittish birds. Eventually, we stumbled across this vibrant male and his cute little girlfriend, who were strutting contentedly around one of the pastures. As soon as we approached, though, he chivalrously ushered her into the nearby bushes for safety, as he quickly ducked down into the tall grass. Once he was convinced we were not a threat, however, he cautiously poked his head up from the scorched reeds and resumed his confident swagger through the field, though his timid partner cautiously remained in hiding. 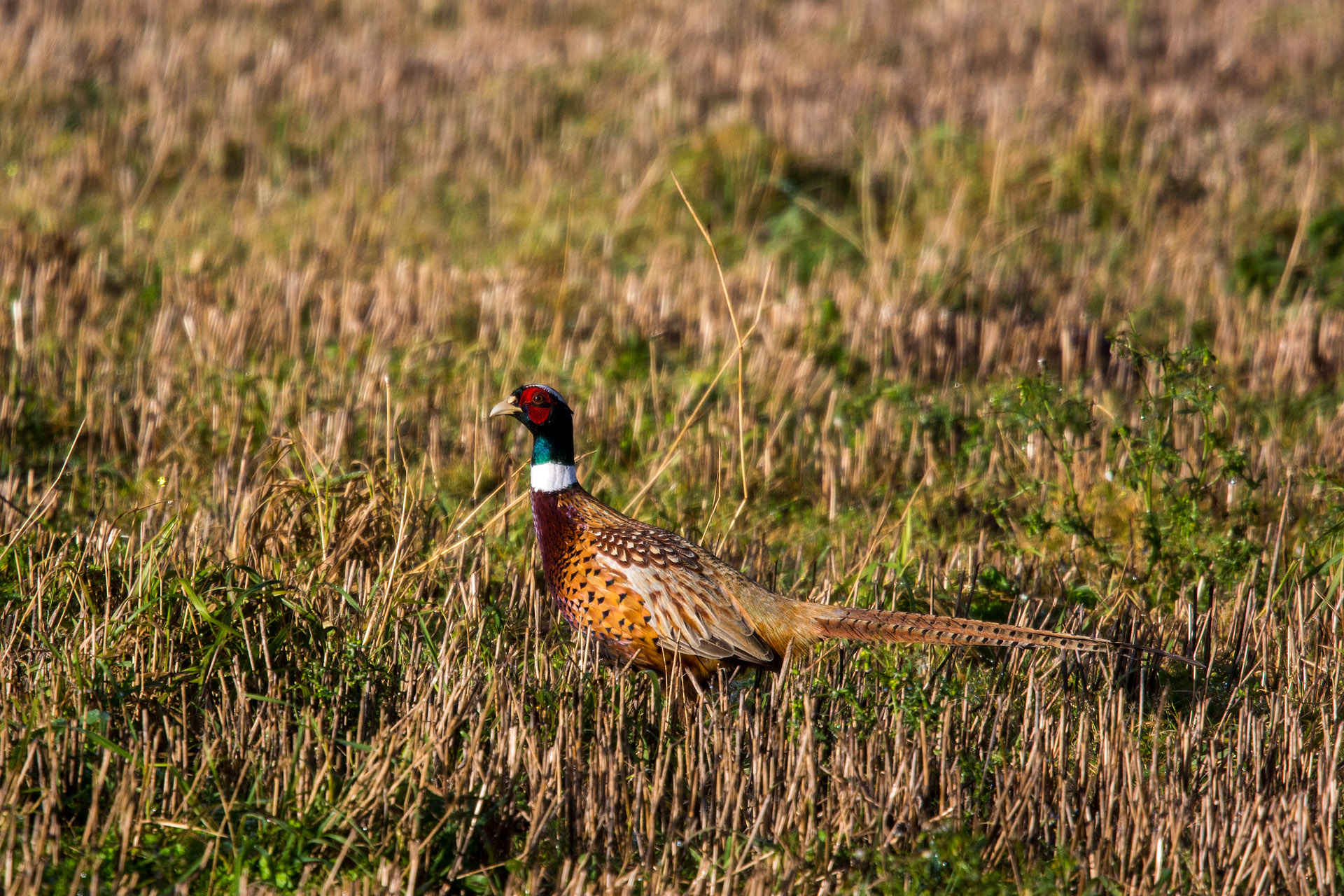 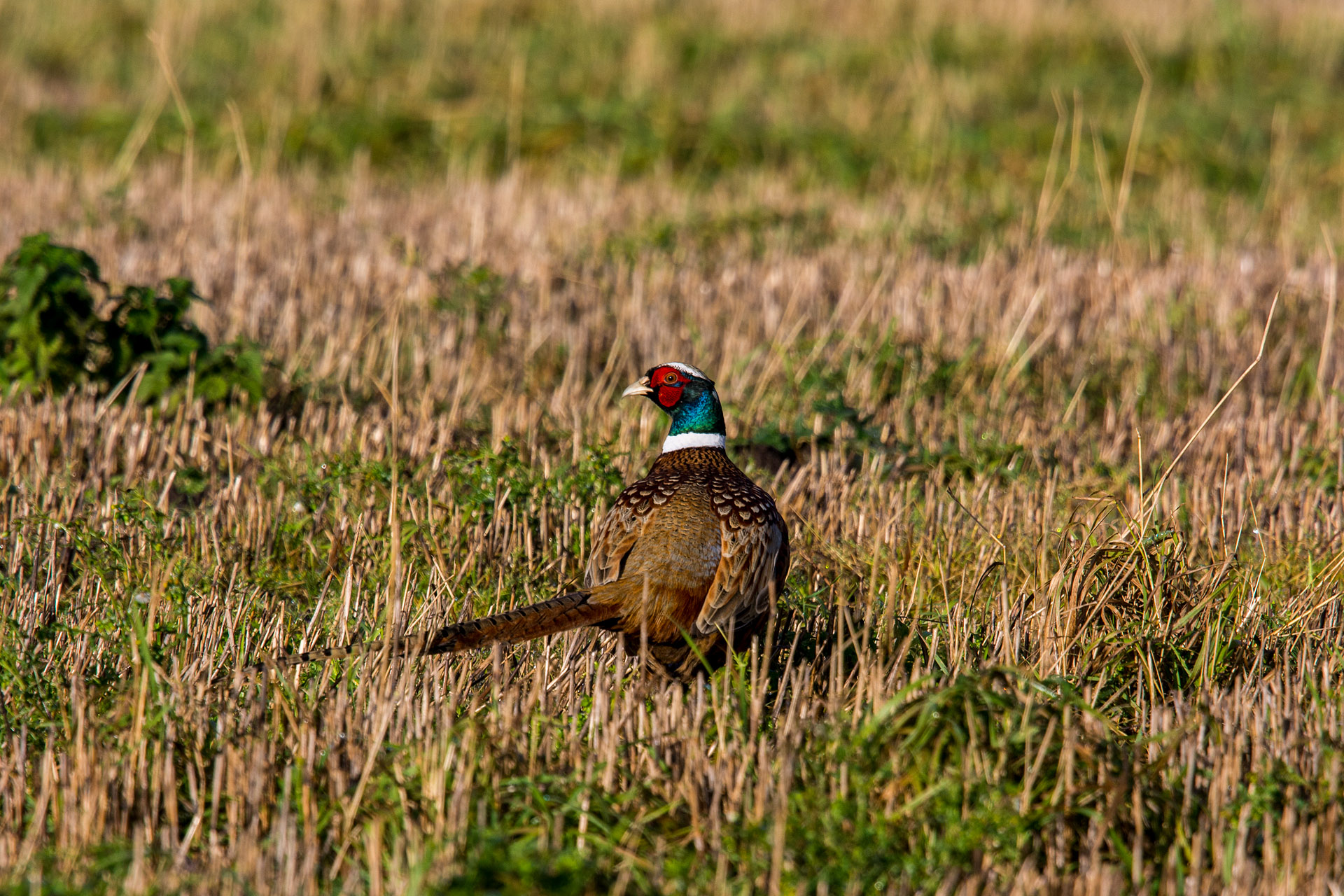 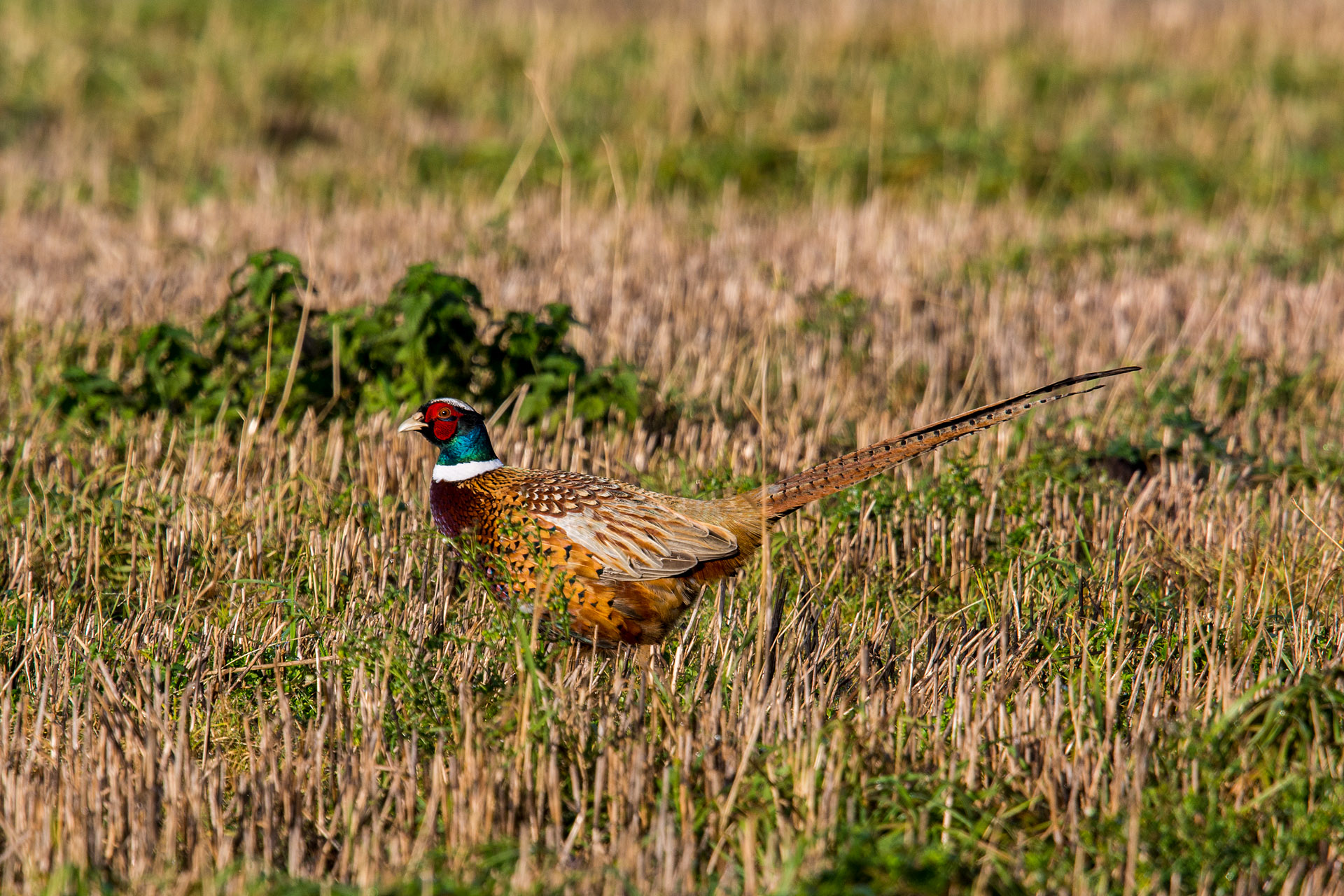 Eventually, we were able to move beyond the profusion of pheasants and arrive at our destination of the Steel Rigg car park. We ultimately decided to explore a 3-mile section of wall stretching across the southern margin of Northumberland National Park, from Steel Rigg to Housesteads (one of the wall’s ancillary forts). Touted by some as one of the more scenic sections of wall, we’d figured we’d give it a shot. And because it was now well into the end of November, we figured even if there were dozens of visitors during the warm, summer holiday, they’d likely now be home avoiding the frosty season.

Much to our delight, the walk was both scenic and peaceful, with only a handful of others quietly wandering alongside the humble stone wall. The Northumberland countryside was surprisingly picturesque, with giant, craggy knolls that erupted unpredictably from the vast expanses of fertile farmland. As the wall dipped and climbed over these rolling hillsides, occasionally meandering through a ribbon of pine forest, its appearance was constantly changing. Many portions of the wall flaunted significant restoration, while other segments barely peeked out from above ground-level. Some sections were disguised by such a bushy blanket of moss that they were barely discernible as belonging to a once-grand fortification. All along the length of wall, sheep grazed nonchalantly in the meadows while robins chirped and hopped alongside us, seeming to want to share all the secrets of their ancient wonder. 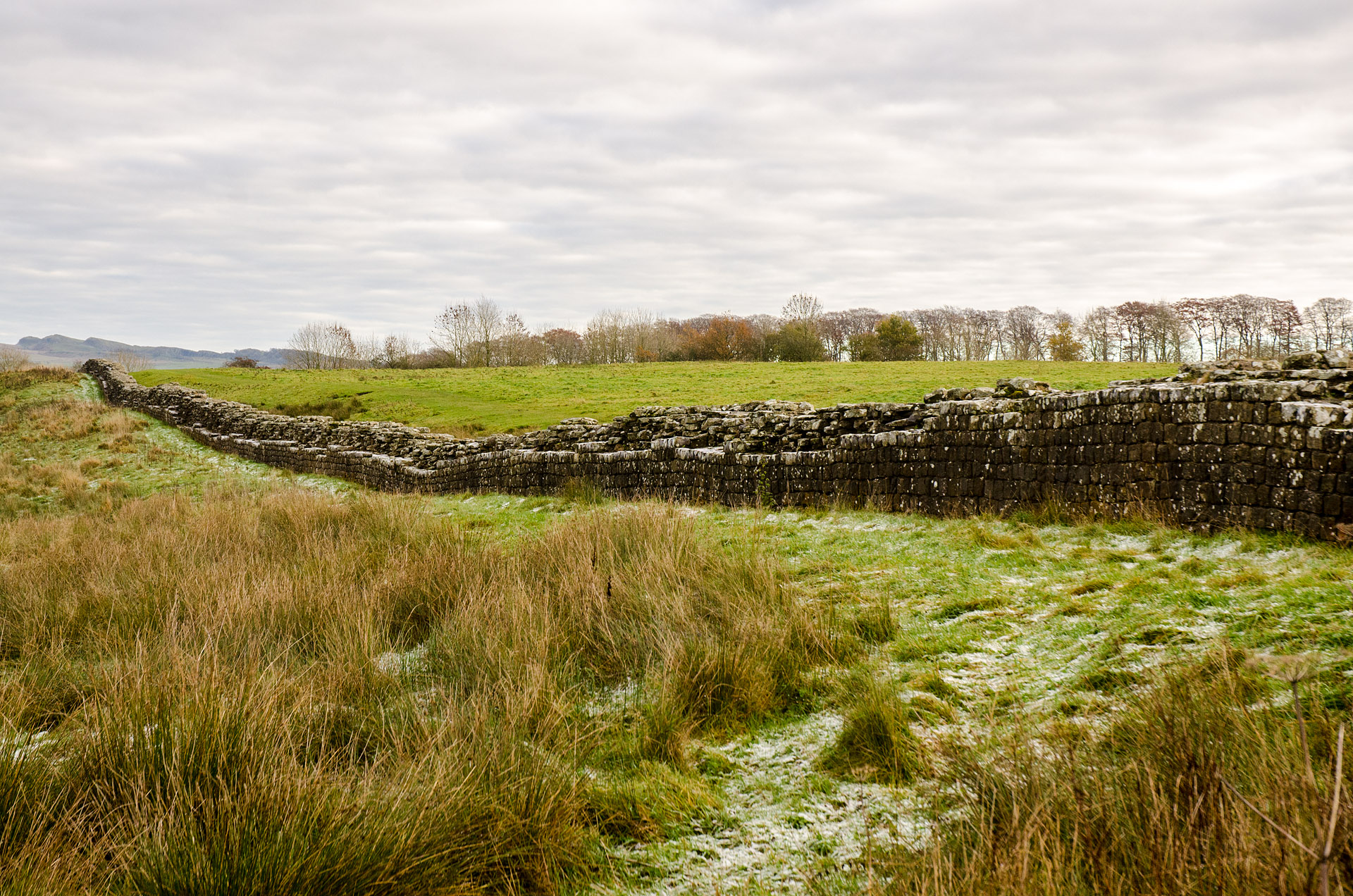 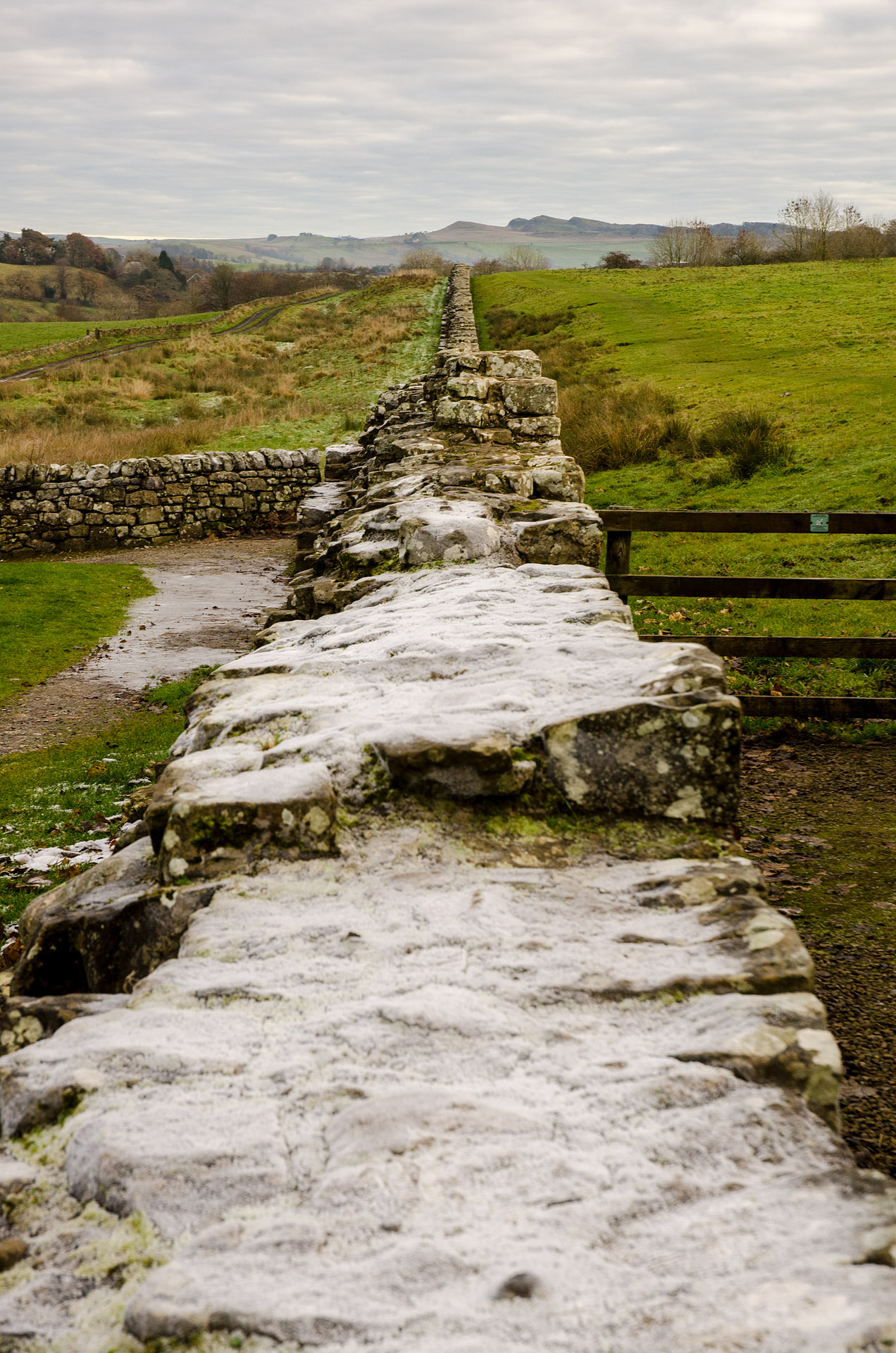 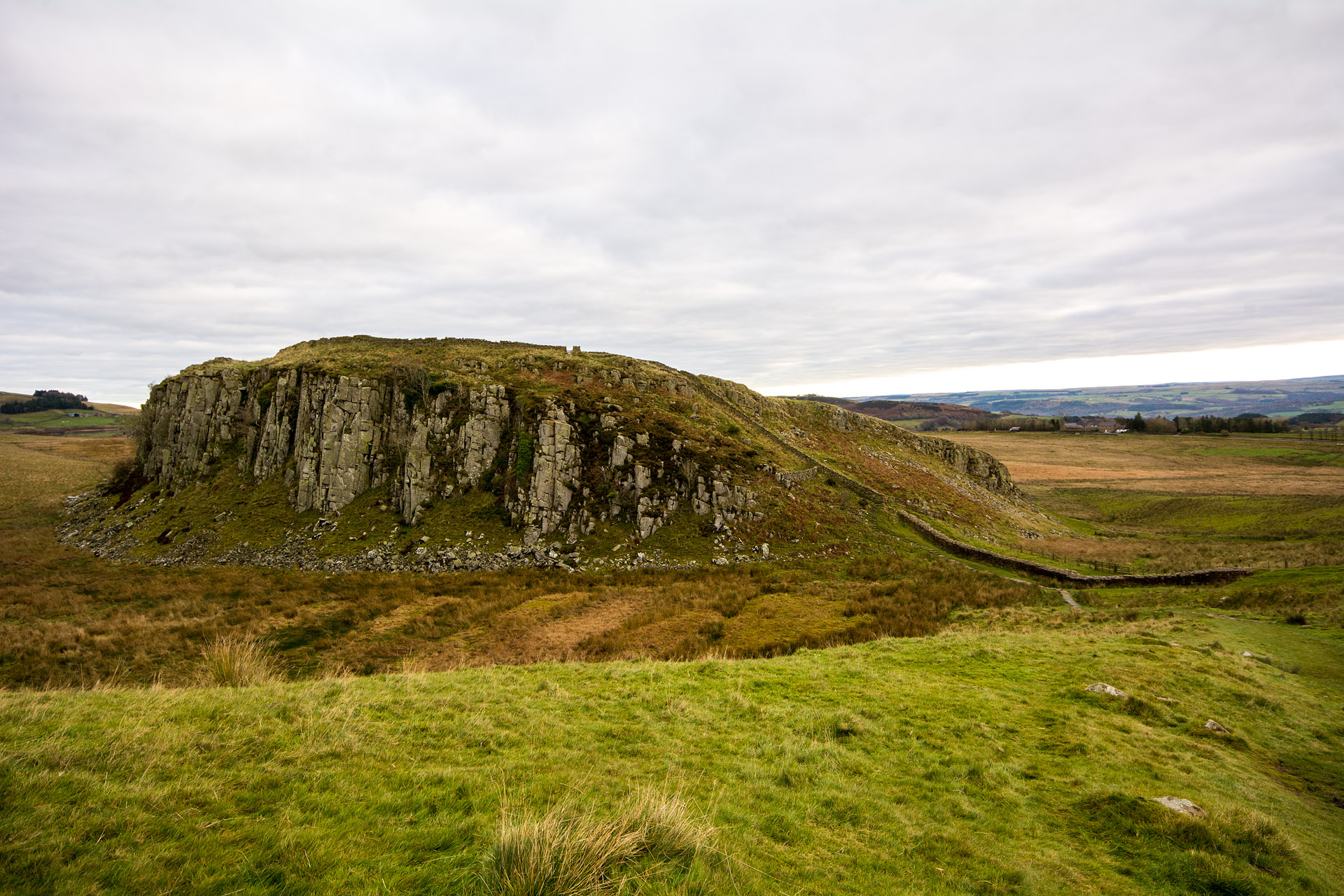 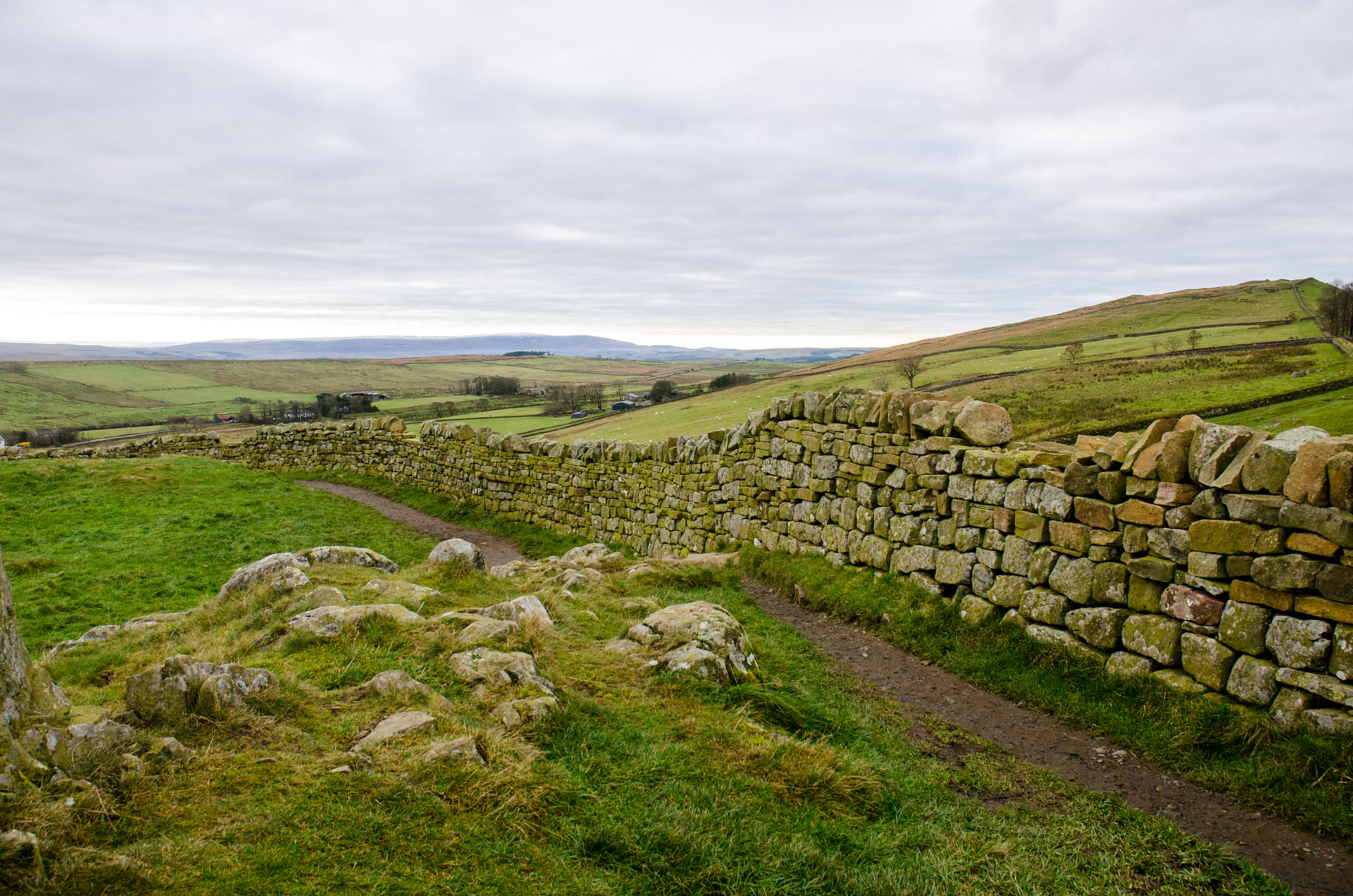 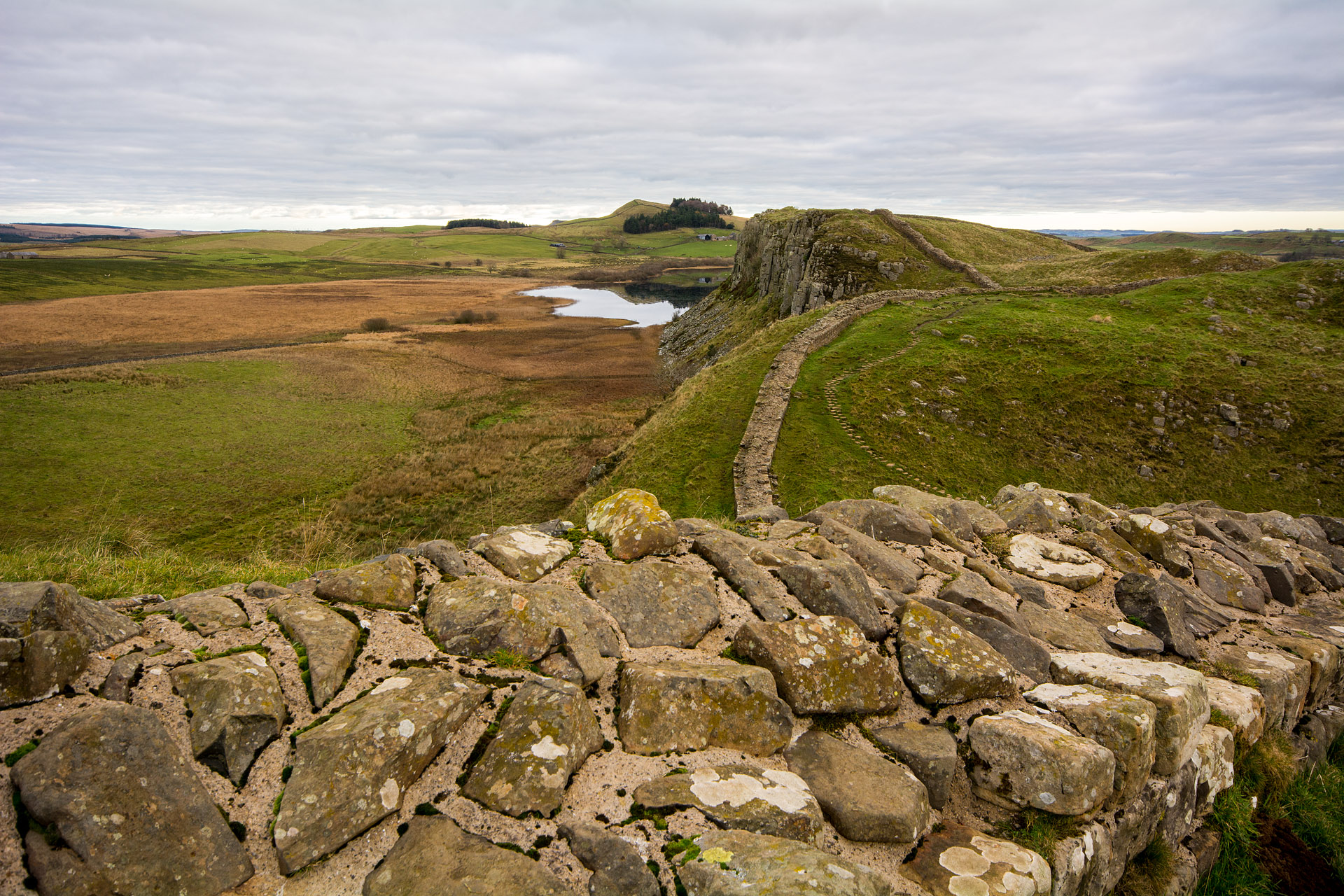 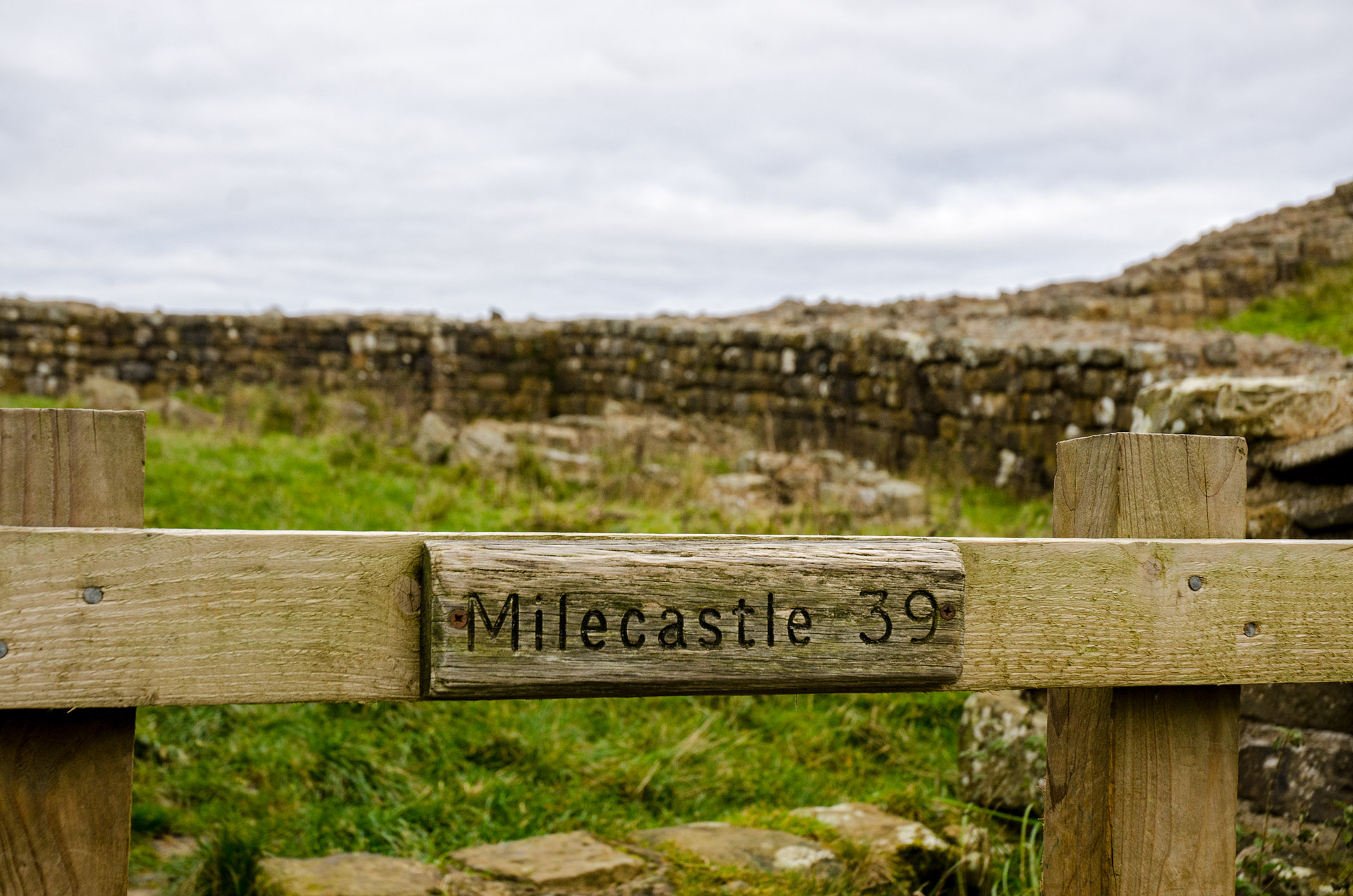 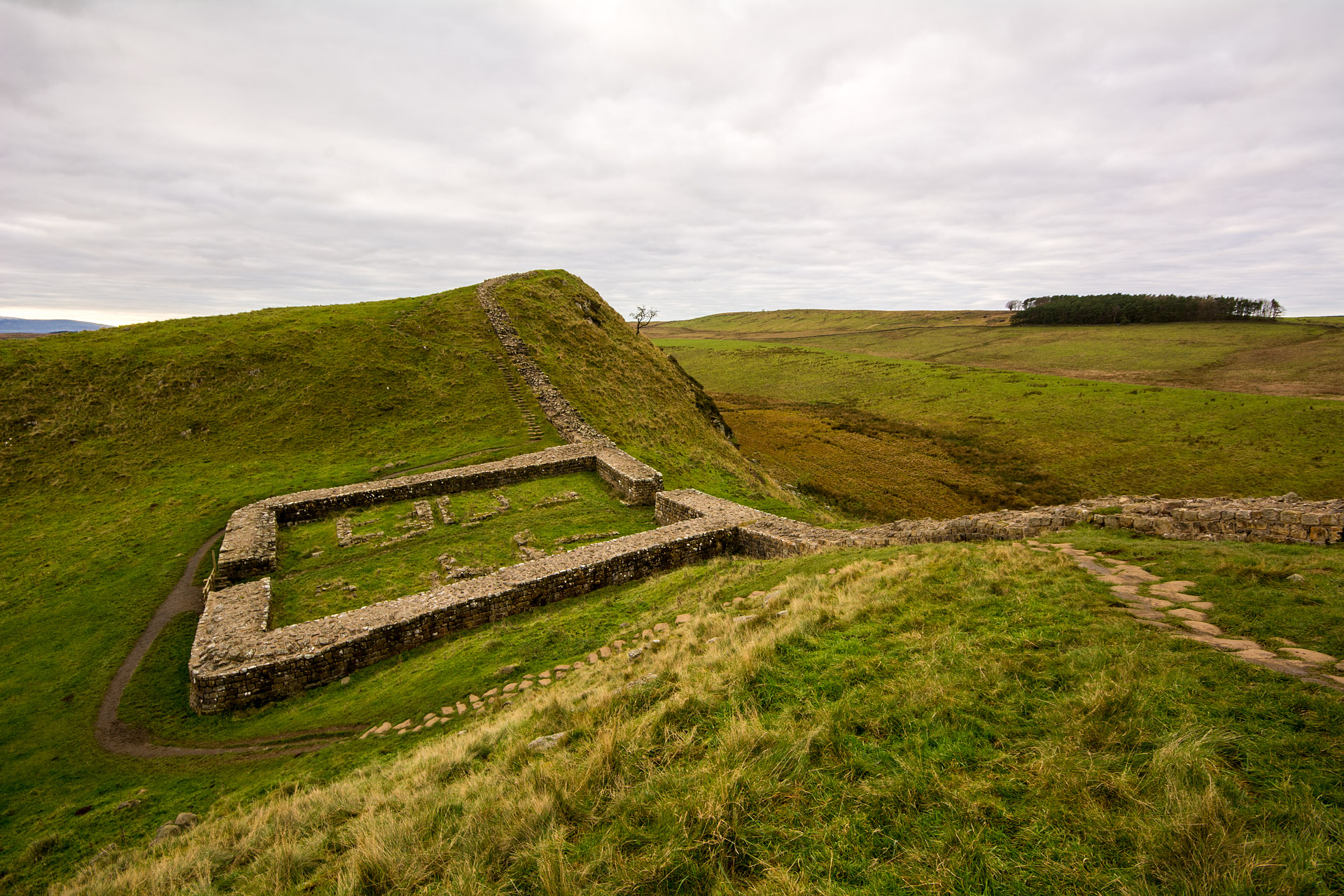 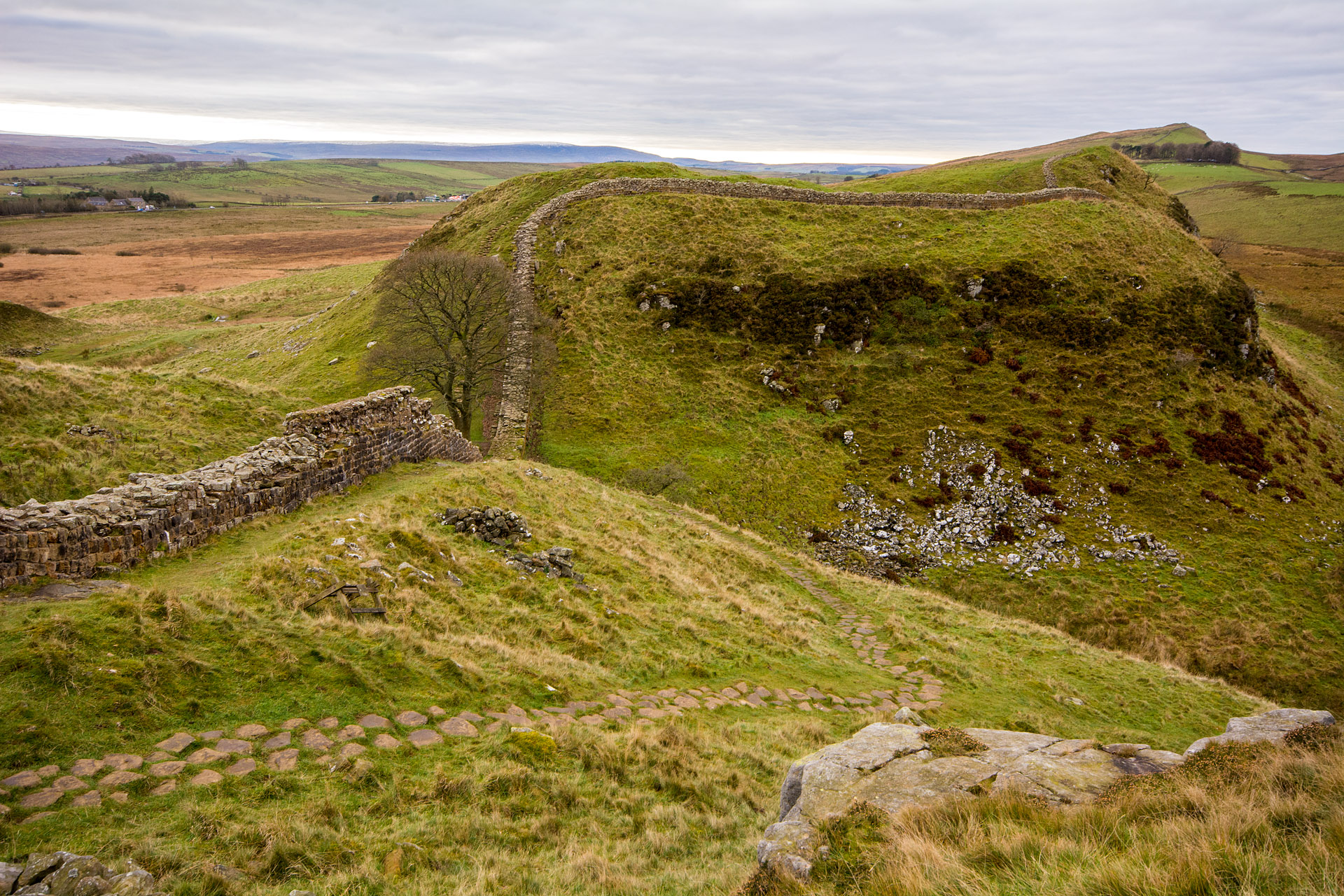 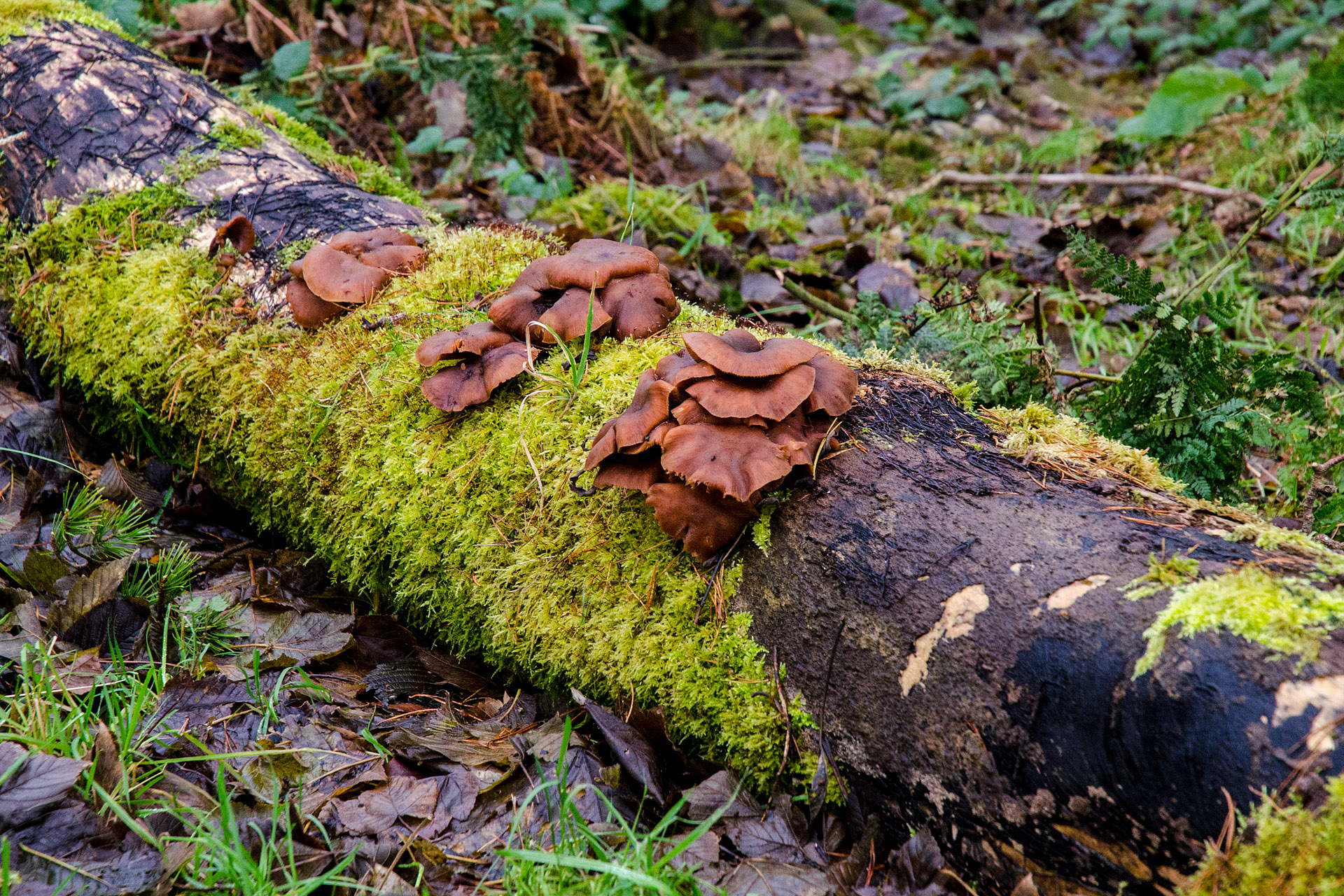 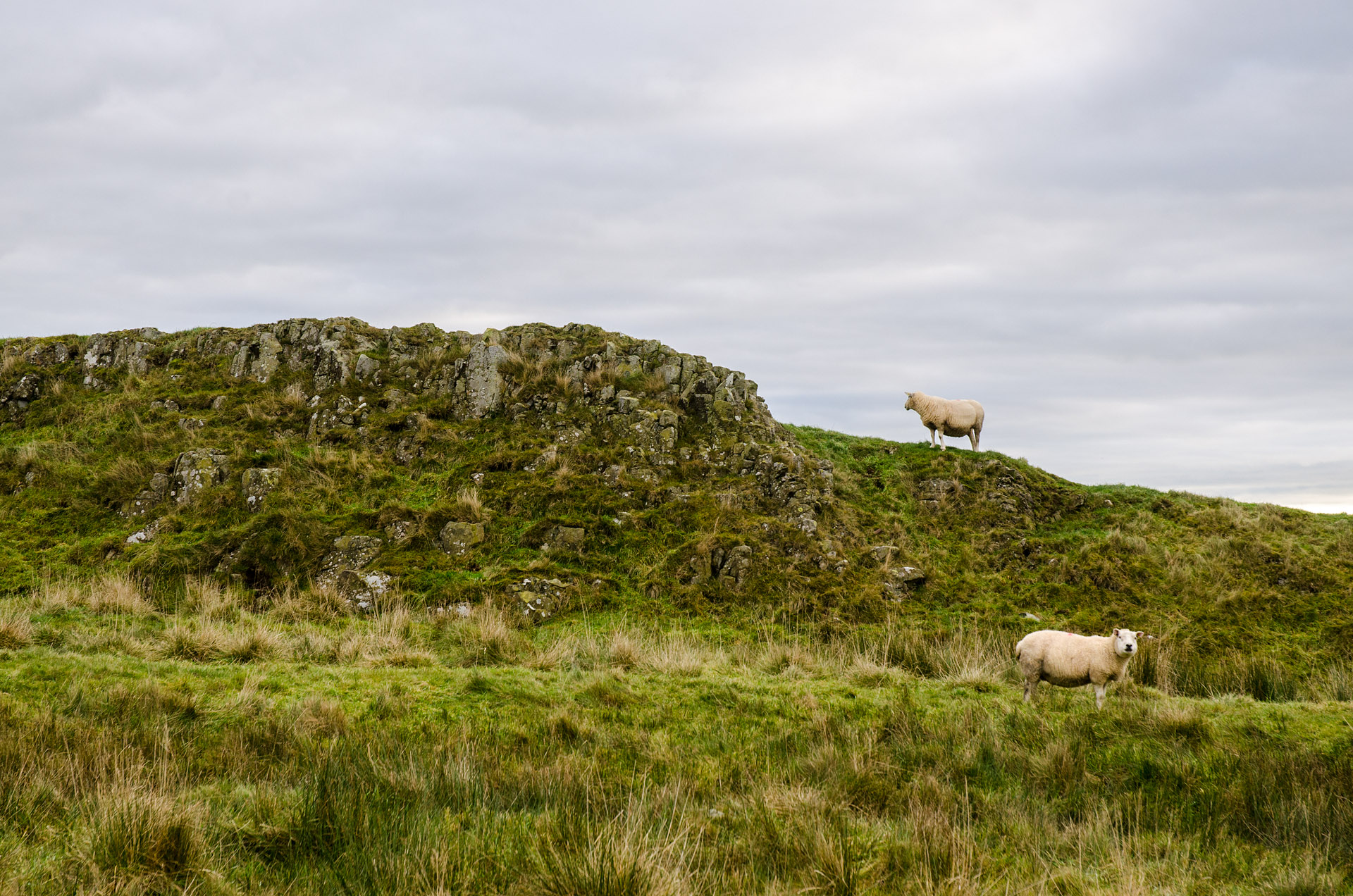 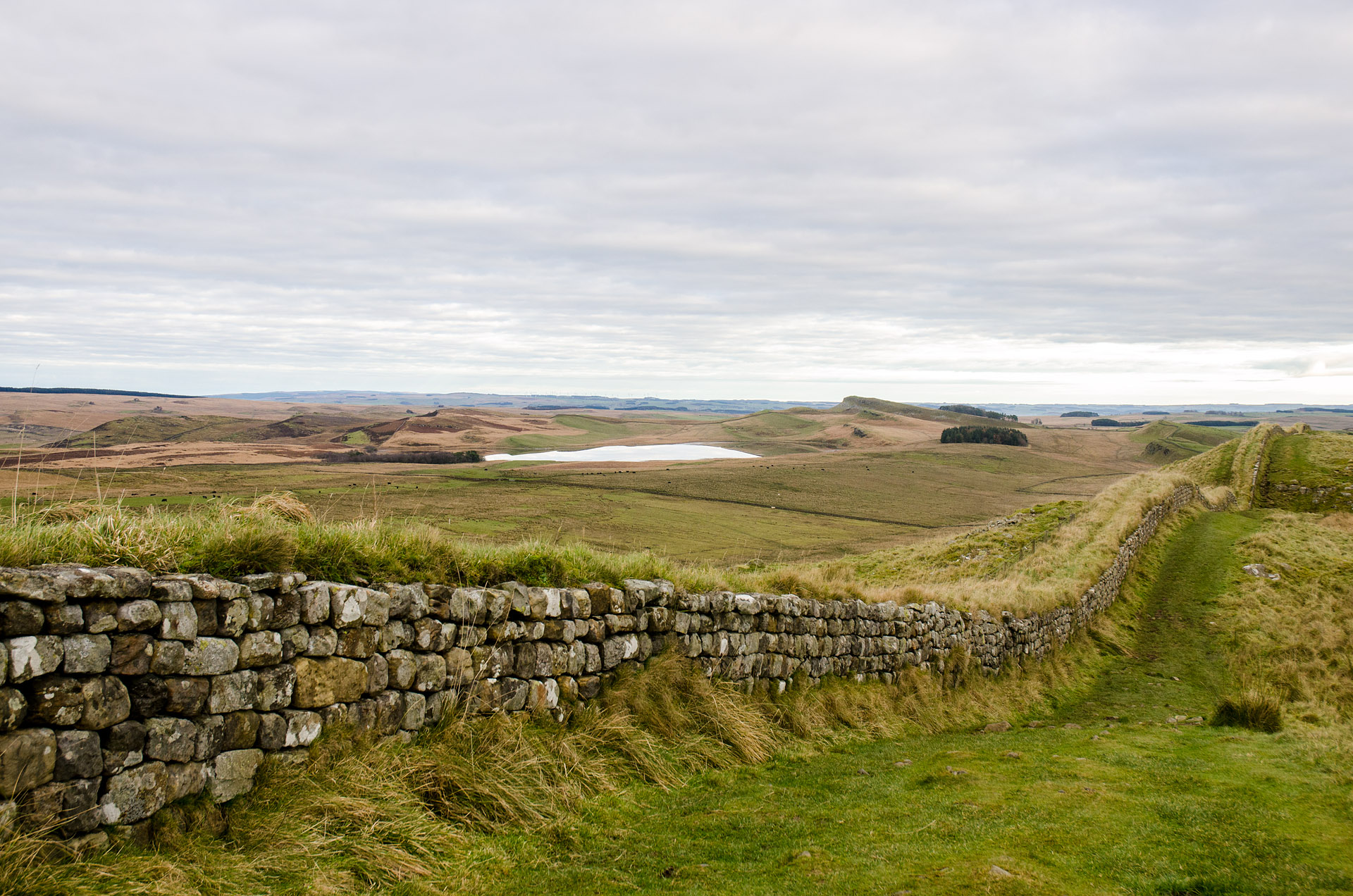 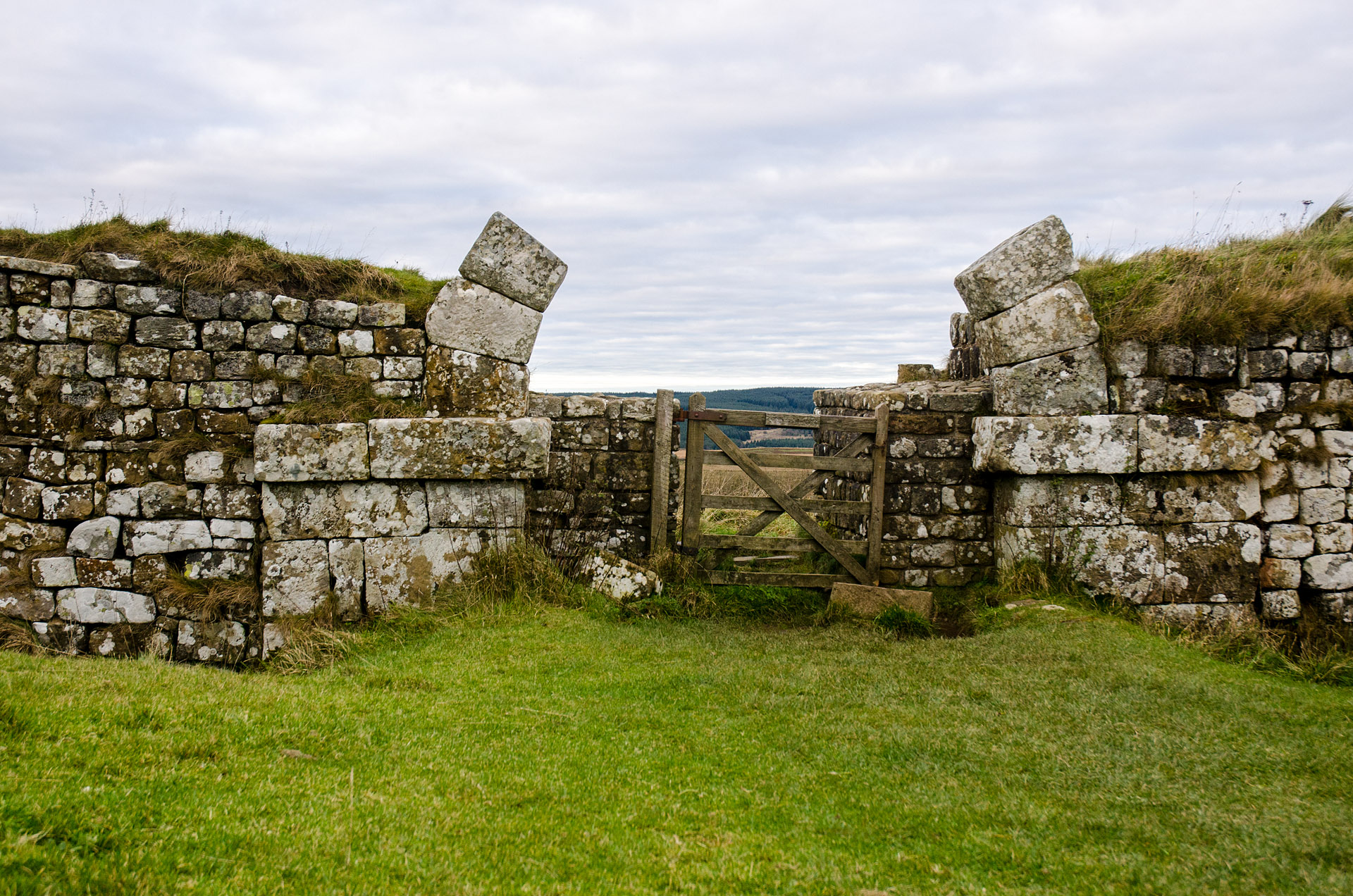 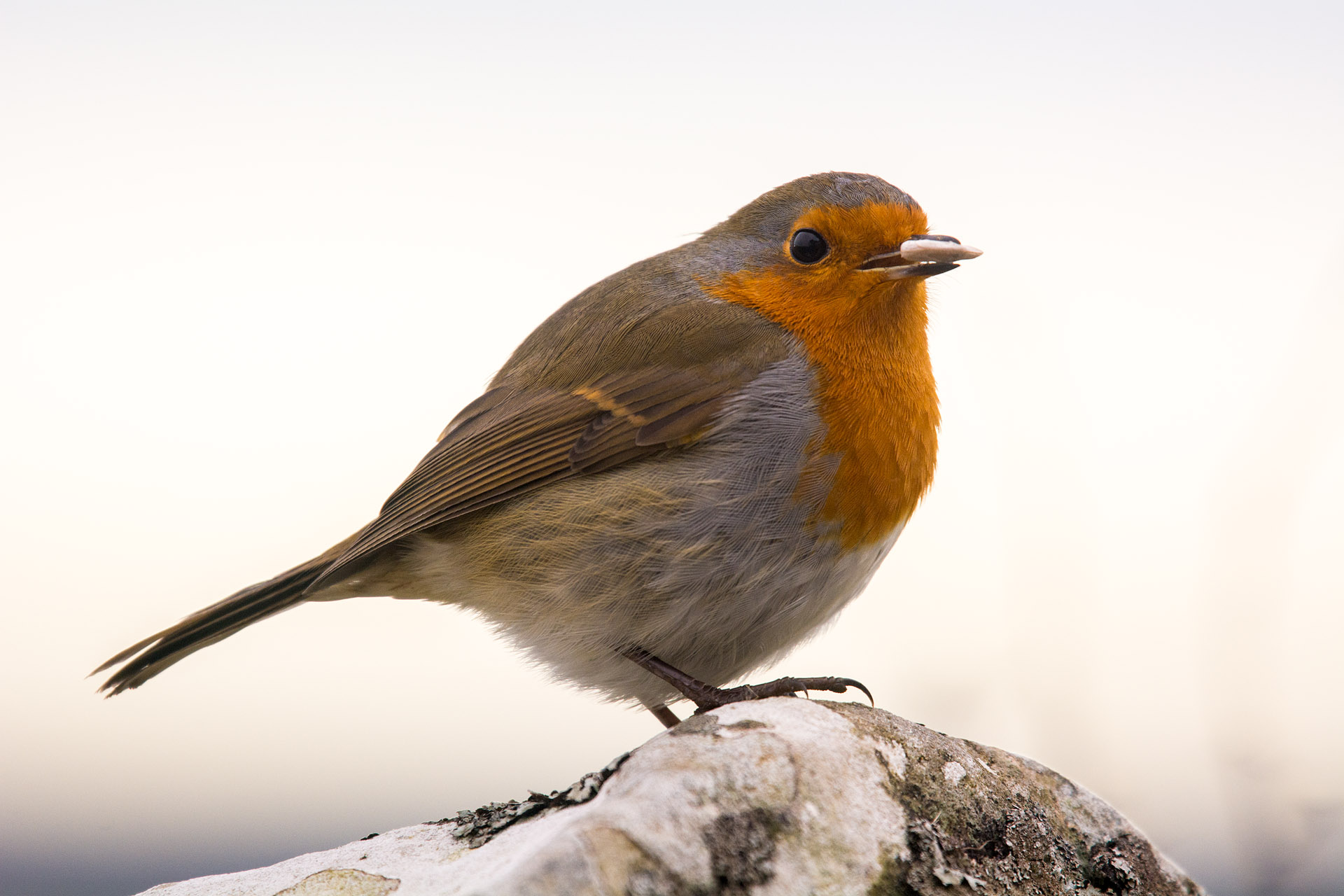 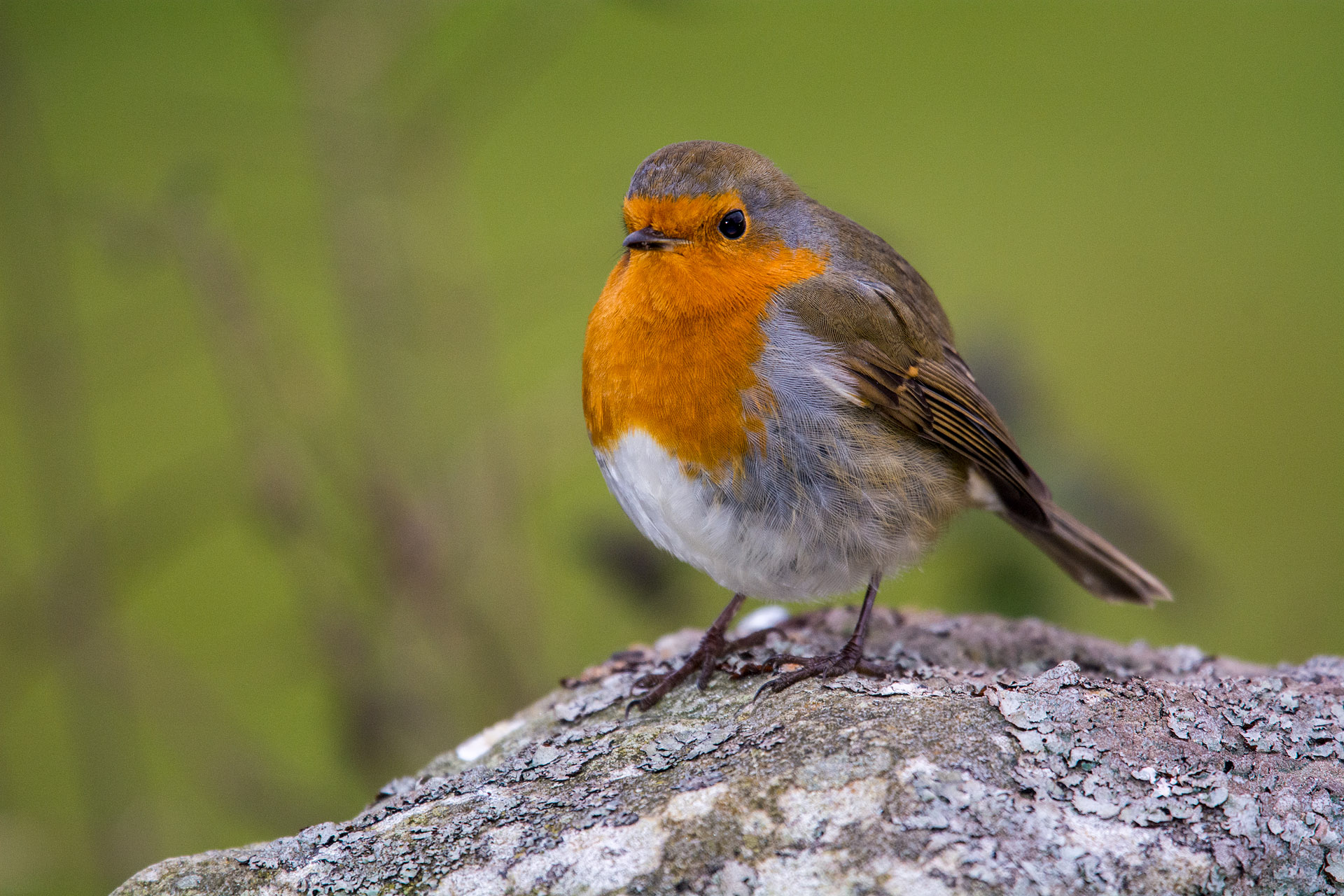 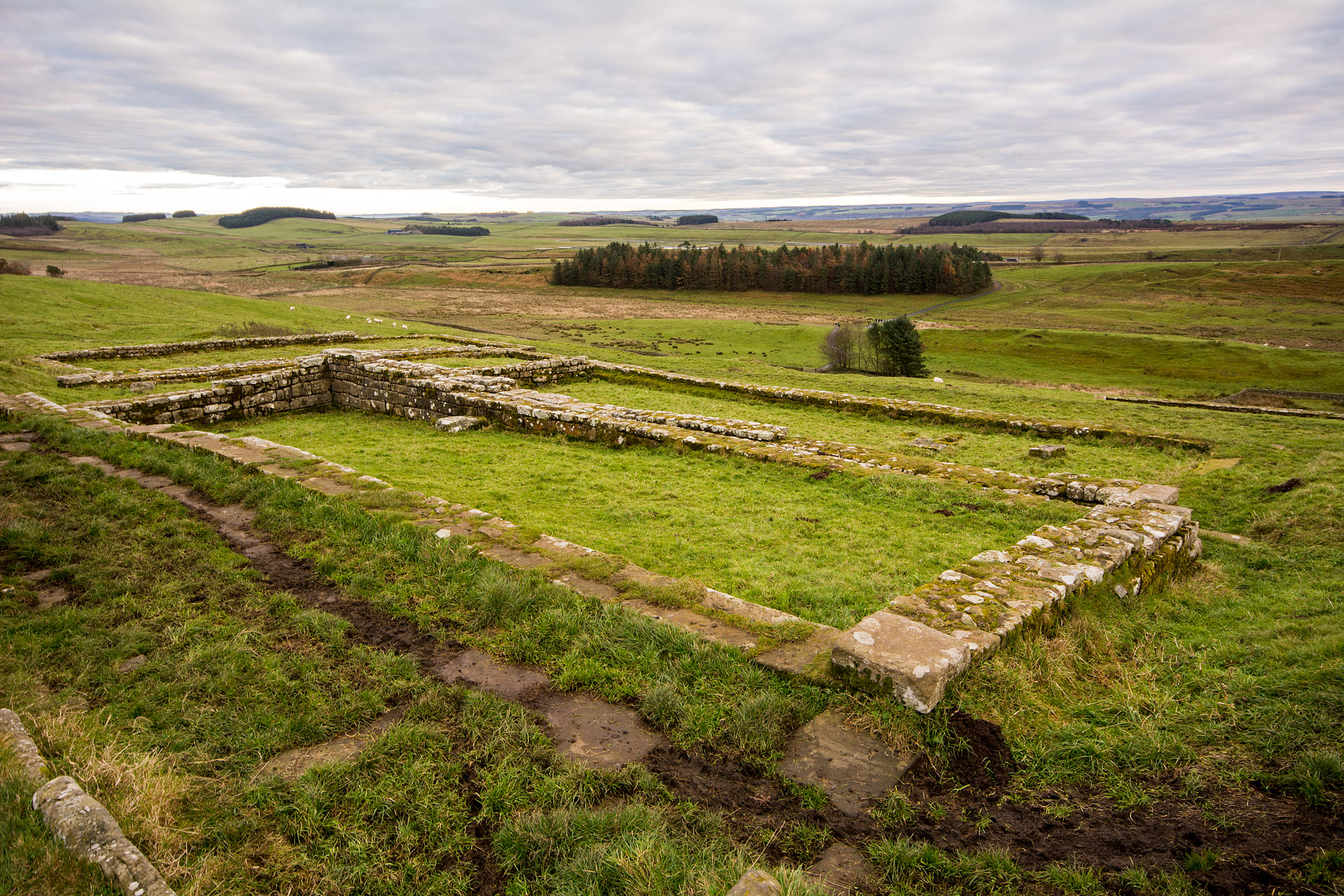 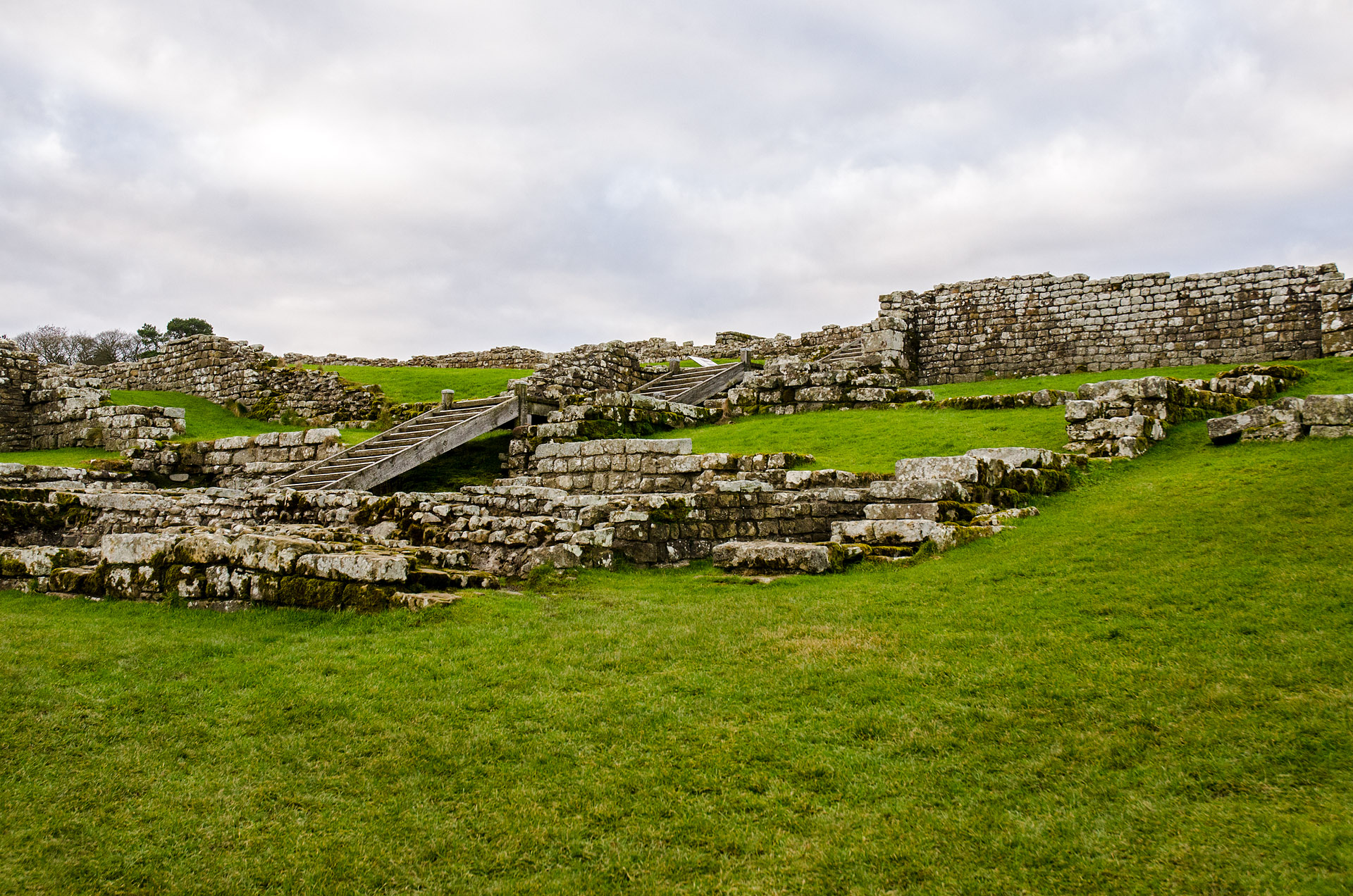 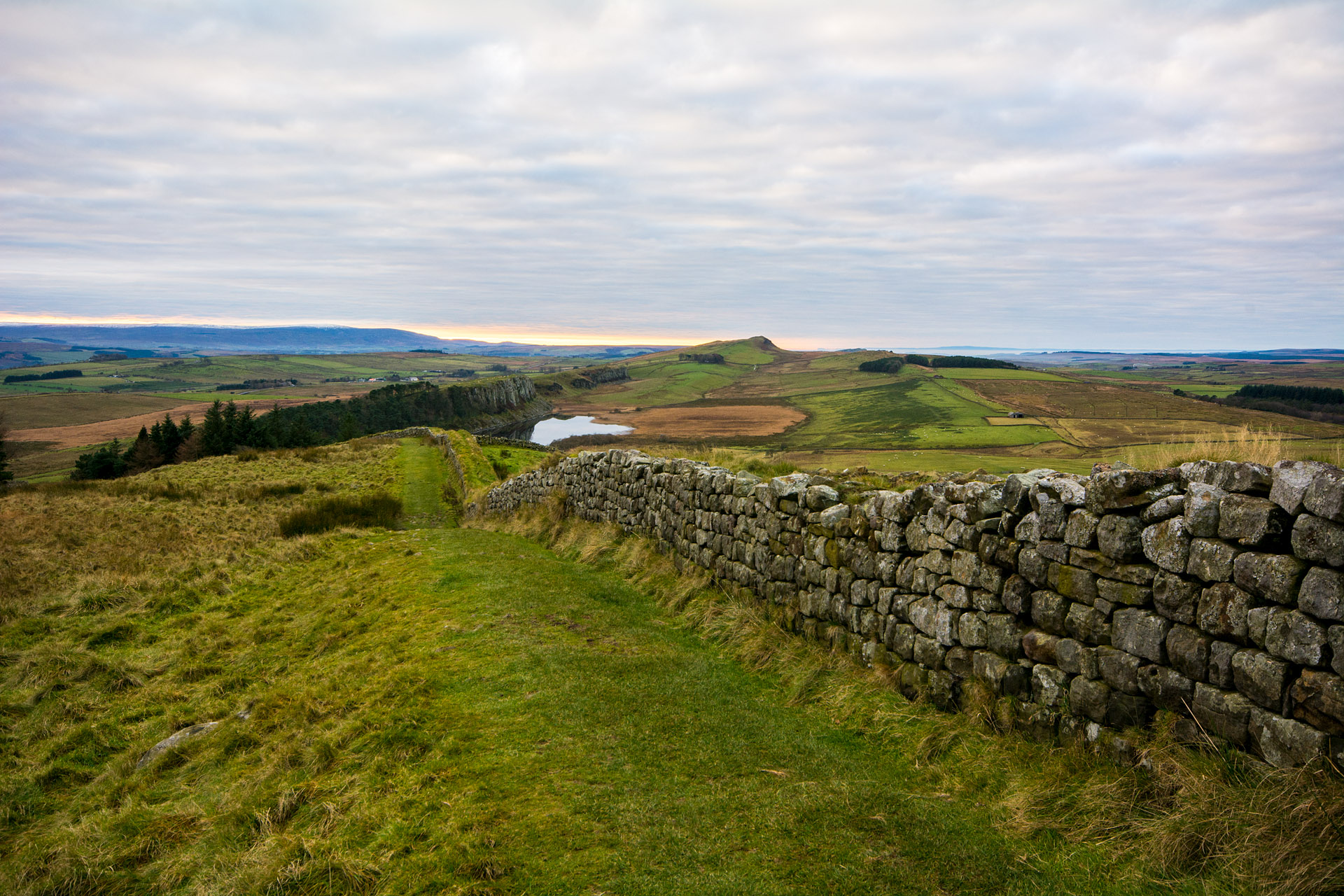 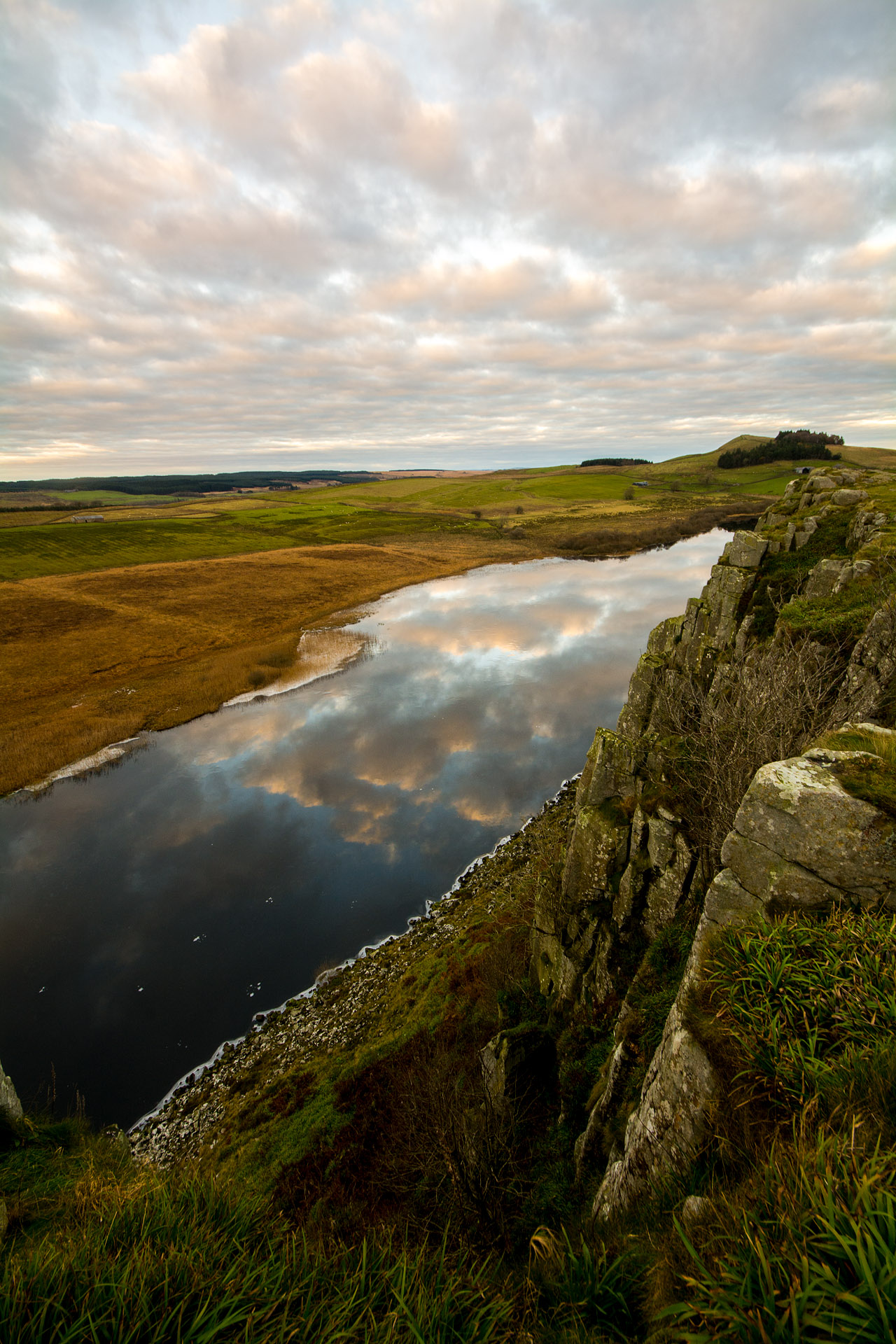 After reaching the ruined fort of Housesteads, once home to 800 Roman soldiers based along this portion of Hadrian’s Wall, we turned and headed back along the wall to Steel Rigg. I think we were both pleasantly surprised with the little side trip, and enjoyed tracing the vestiges of the northernmost boundary of the great Roman Empire. Upon completing the six-mile out-and-back trip, we hopped back in the car to head for Edinburgh… but not before being treated to one last bit of Northumberland beauty. The impenetrable cover of clouds that had lingered through much of the afternoon had broken up just enough to let a few of the dazzling, hidden sunrays escape – painting the entire sky with cottony layers of hot pinks and cool greys… a spectacular parting gift as we headed for Scotland. 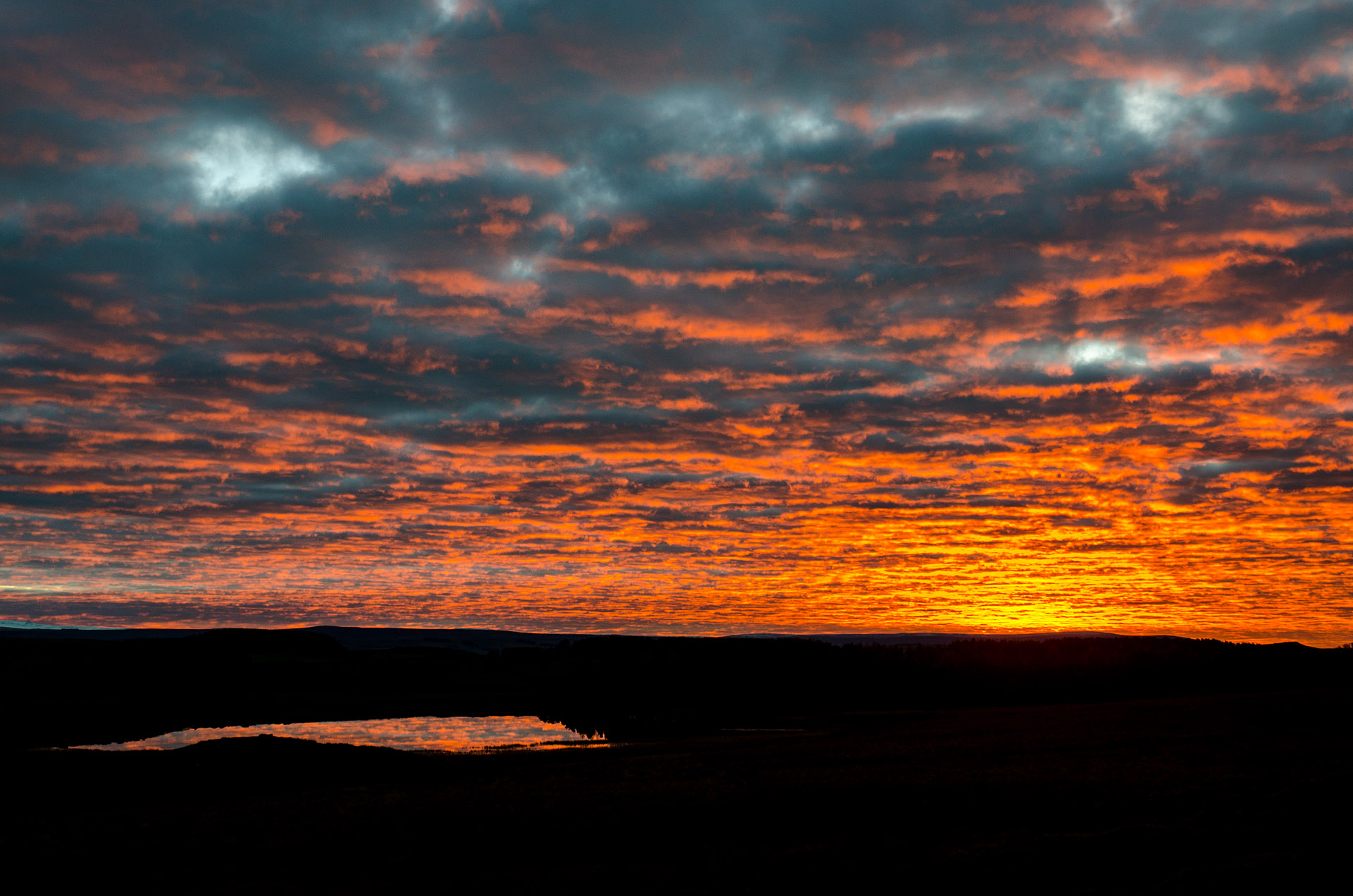 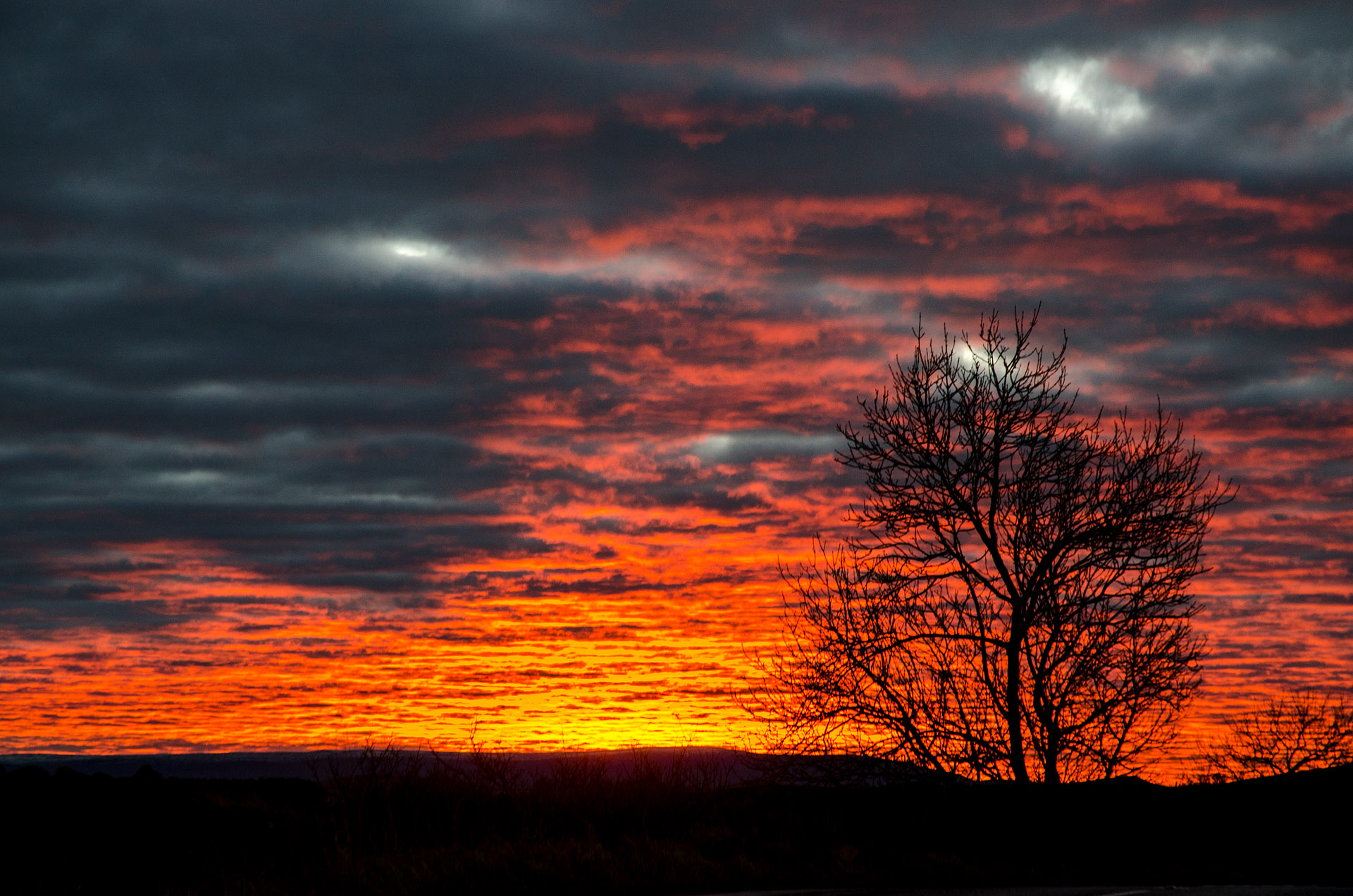 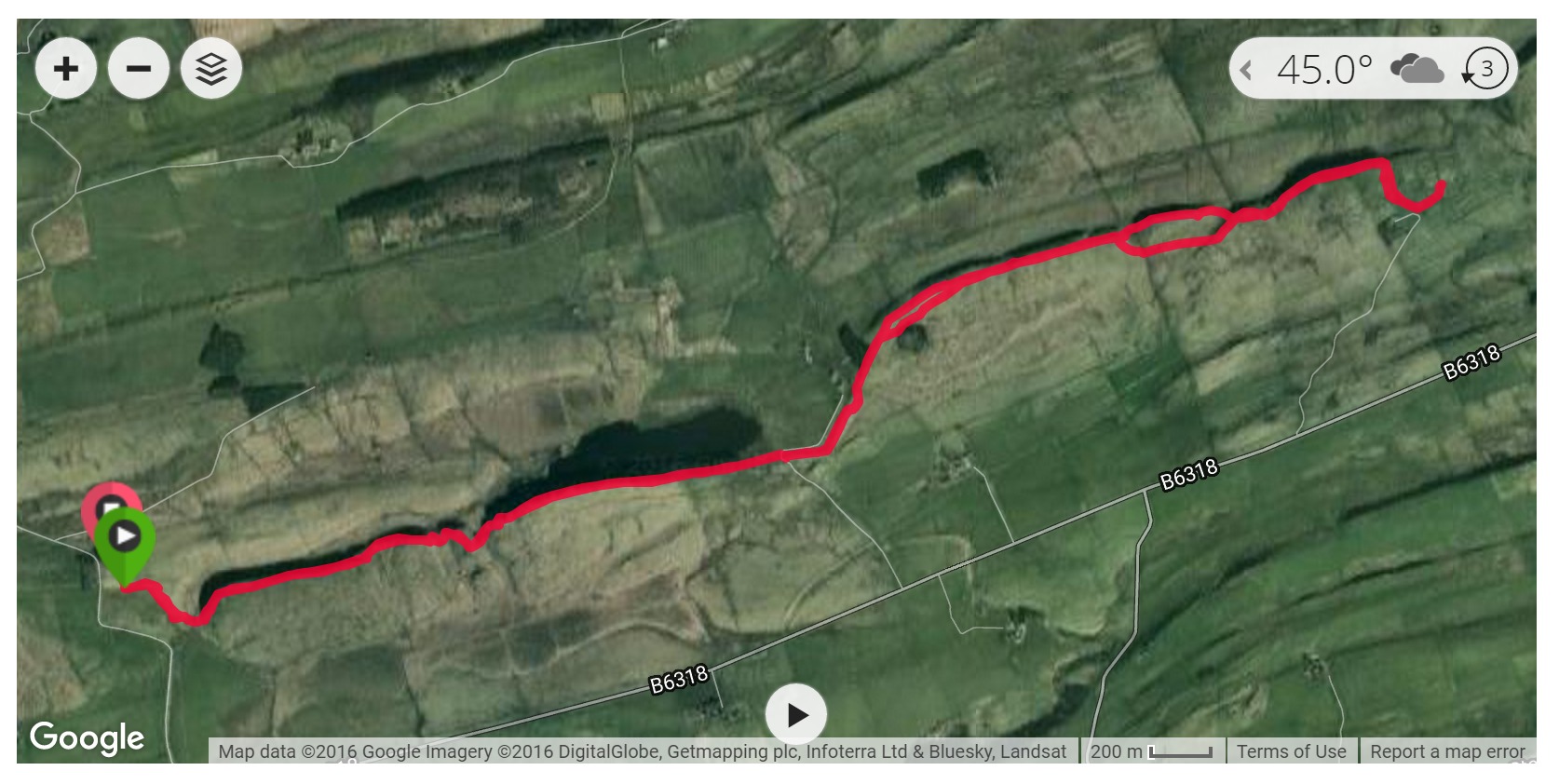 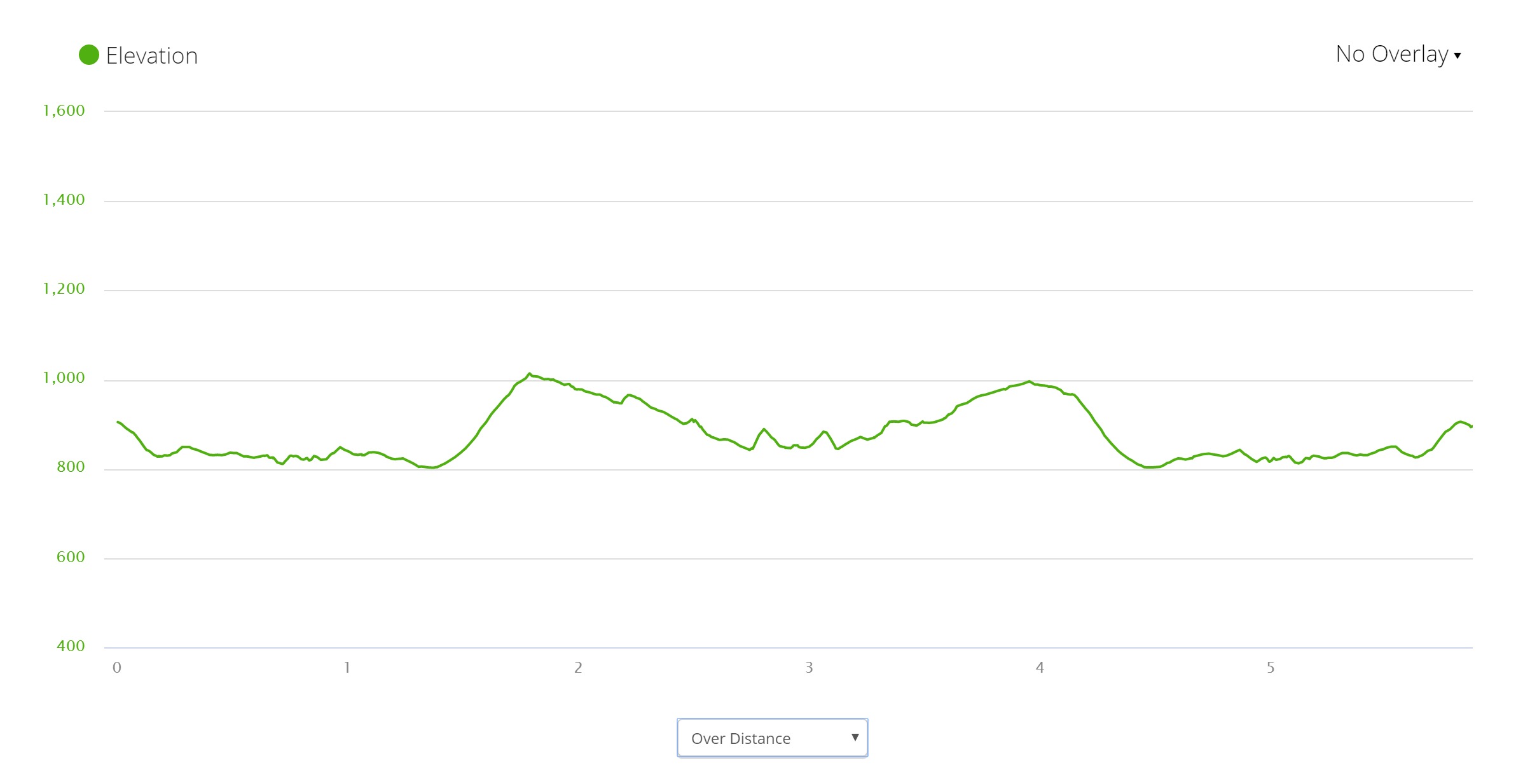