Promising some of the Dolomites’ most epic views and incredible scenery, we decided to try one of the more famous high-altitude hikes around Val Gardena, a 10-mile (16-km) circuit through the stunning Puez Odle Naturepark. We had been hoping to avoid another lift ticket, but the bus service around the area becomes more limited in the shoulder season, meaning that no route regularly serviced Gardena Pass during our stay (end of September). Thus, we ending up taking a bus from the center of Ortisei to the town of Selva Wolkenstein, where the Dantercepies gondola brought us to the beginning of the day’s hike.

The trail began at the Rifugio Jimmy with a series of steep switchbacks along the Cir Pass, following the base of the Pizes de Cir (Cir Group), which offered stunning views of the verdant valley and neighboring, snow-capped peaks of the Sella Group. After the short climb up the pass, the terrain immediately transformed into a desolate, rocky landscape – rough and rugged, and a stark contrast to the fertile valley on the other side. After a second ascent, the trail eventually leveled out on an incredible alpine plateau, leading us past Crespeina Lake, a striking alpine pool surrounded by bleating sheep, whose clanging bells echoed brightly in the crisp, morning air. Views on both sides of the traverse were nothing short of spectacular, with green valleys trailing endlessly into the distance beneath rugged cliffs. The trail soon transitioned again into a more classic “moonscape,” with rugged, rocky terrain, sparse vegetation, and dozens of small mounts erupting from the barren, grey landscape of the Crespeina Plateau.

We wound along the edge of beautiful ridge for a while, enjoying constant views into the vast valley below, until we arrived at the Rifugio Puez, a lovely mountain hut with a spectacular view from its perch at 2,475 m (8,120 feet). From here, the trail turned abruptly downward, and dramatically so. The steep switchbacks at the beginning of the hike down were only a hint of what awaited us during the 1000+ meter plummet towards the town. We skidded and slid down the loose scree, breathing a deep sigh of relief when we finally arrived at the valley floor and proceeded at a more normal descent under beautiful forests and across the pleasant meadows of the Vallunga Valley, through which a glacial stream cut a cold, winding path.

Before finally arriving back in Selva, another tiny mountain church (the Chapel of San Silvestro) came into view at the edge of the Vallunga Valley, as did the nearby ruins of the 13th-century Wolkenstein Castle, perched some 1,600 meters (5,200 feet) above the valley on the sheer rock face of the Stevia Wall. If you’re looking for great day hike in the Dolomites, consider this track up Gardena Pass… the Puez Odle Naturepark offers some seriously spectacular scenery. 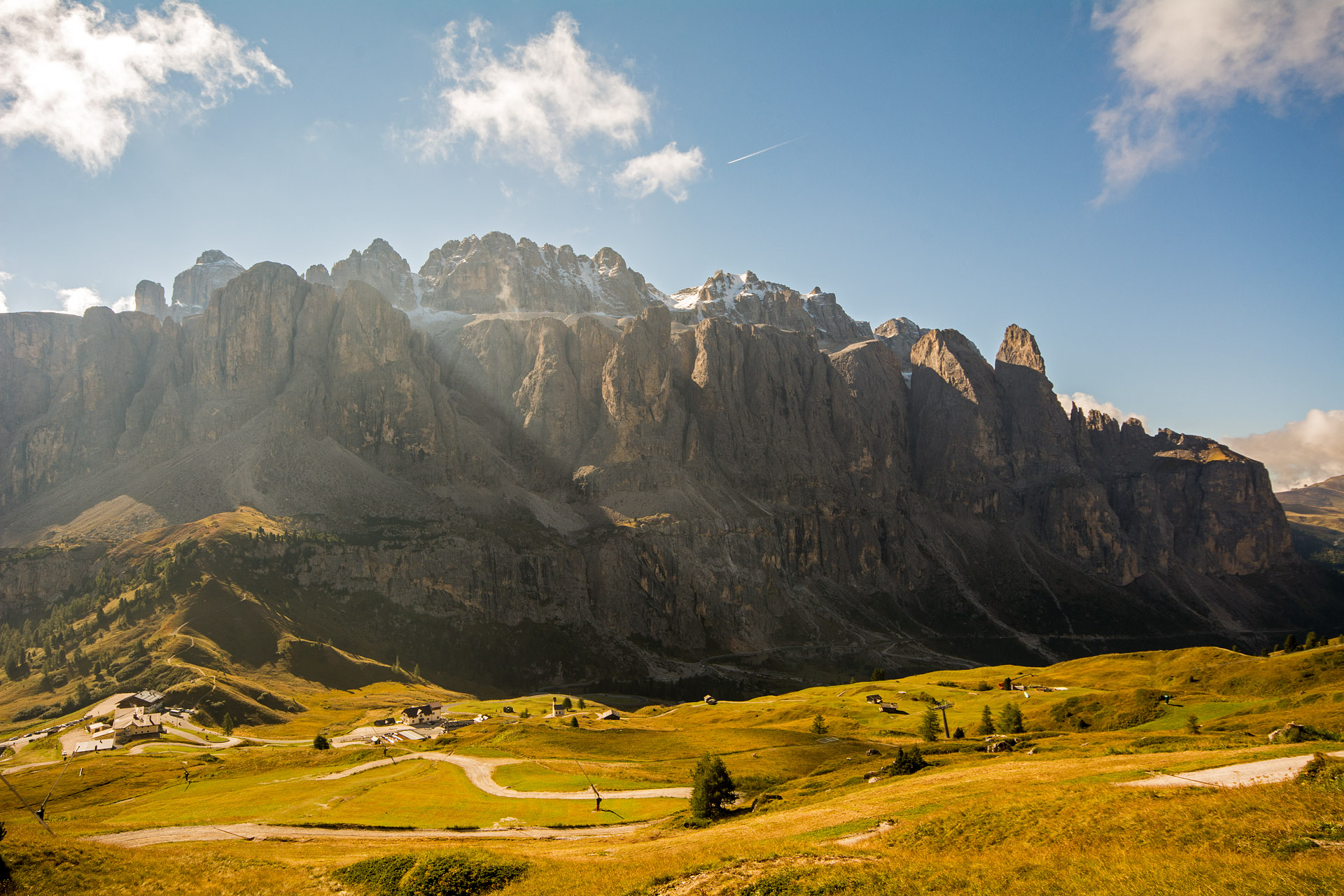 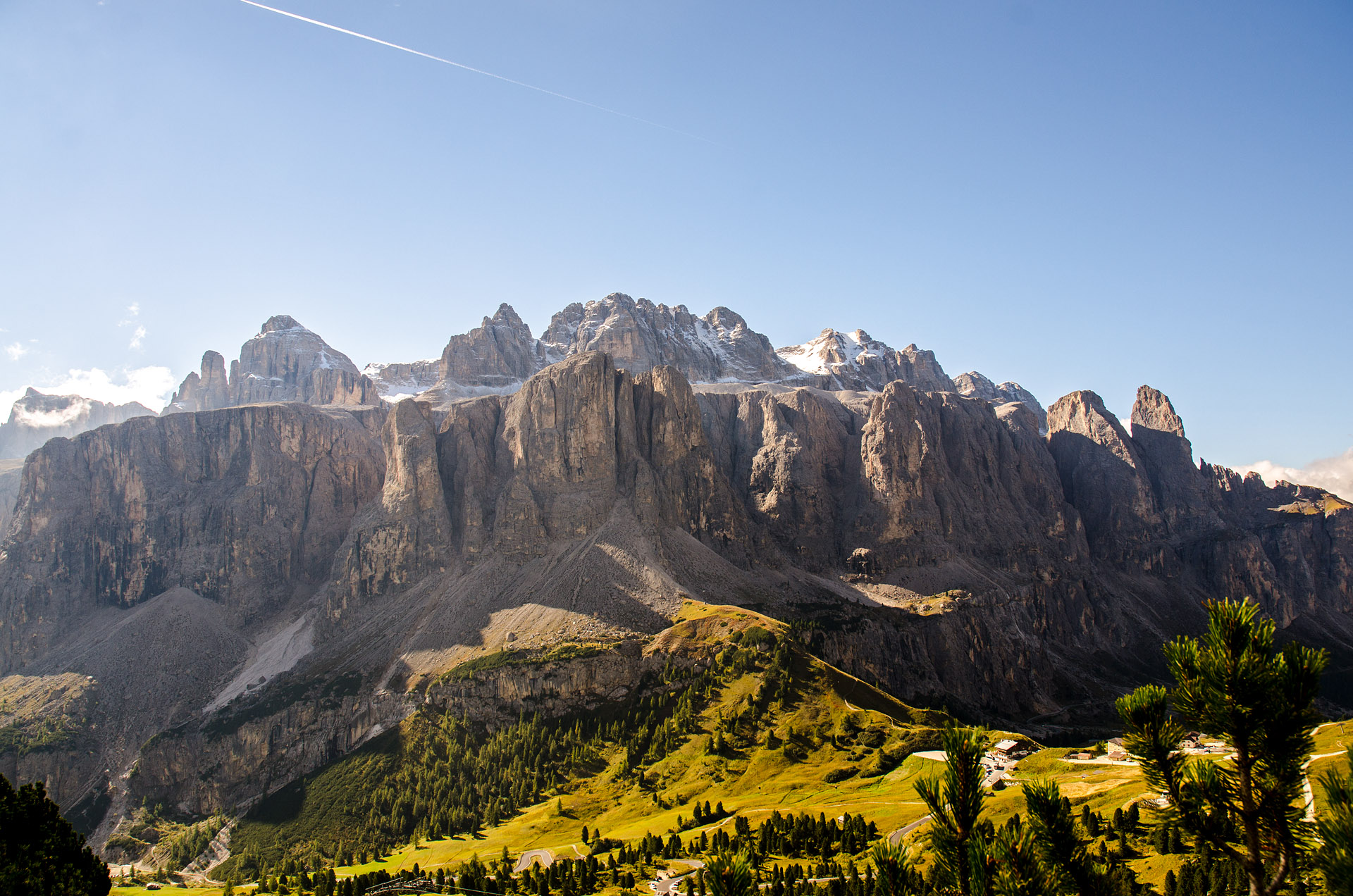 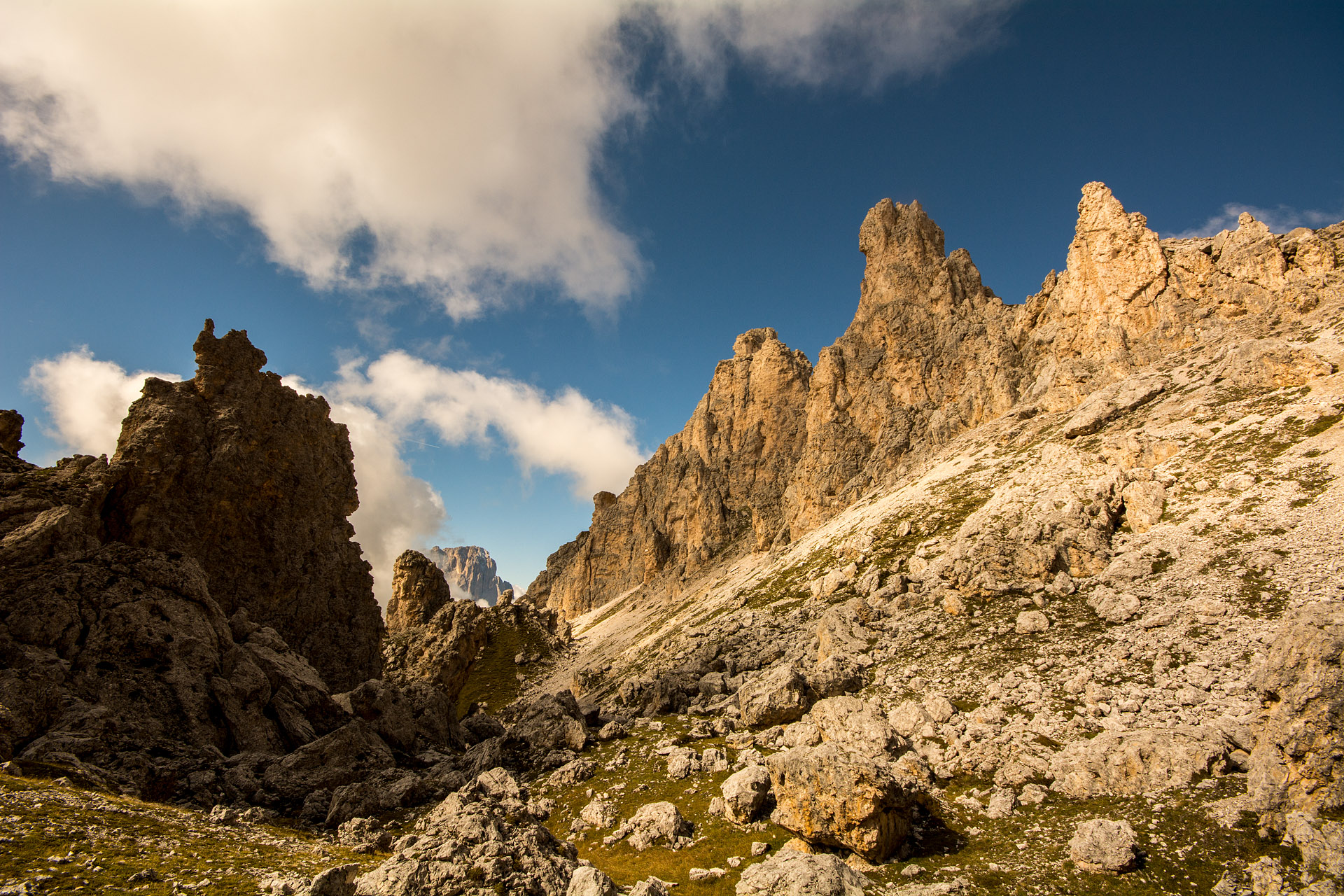 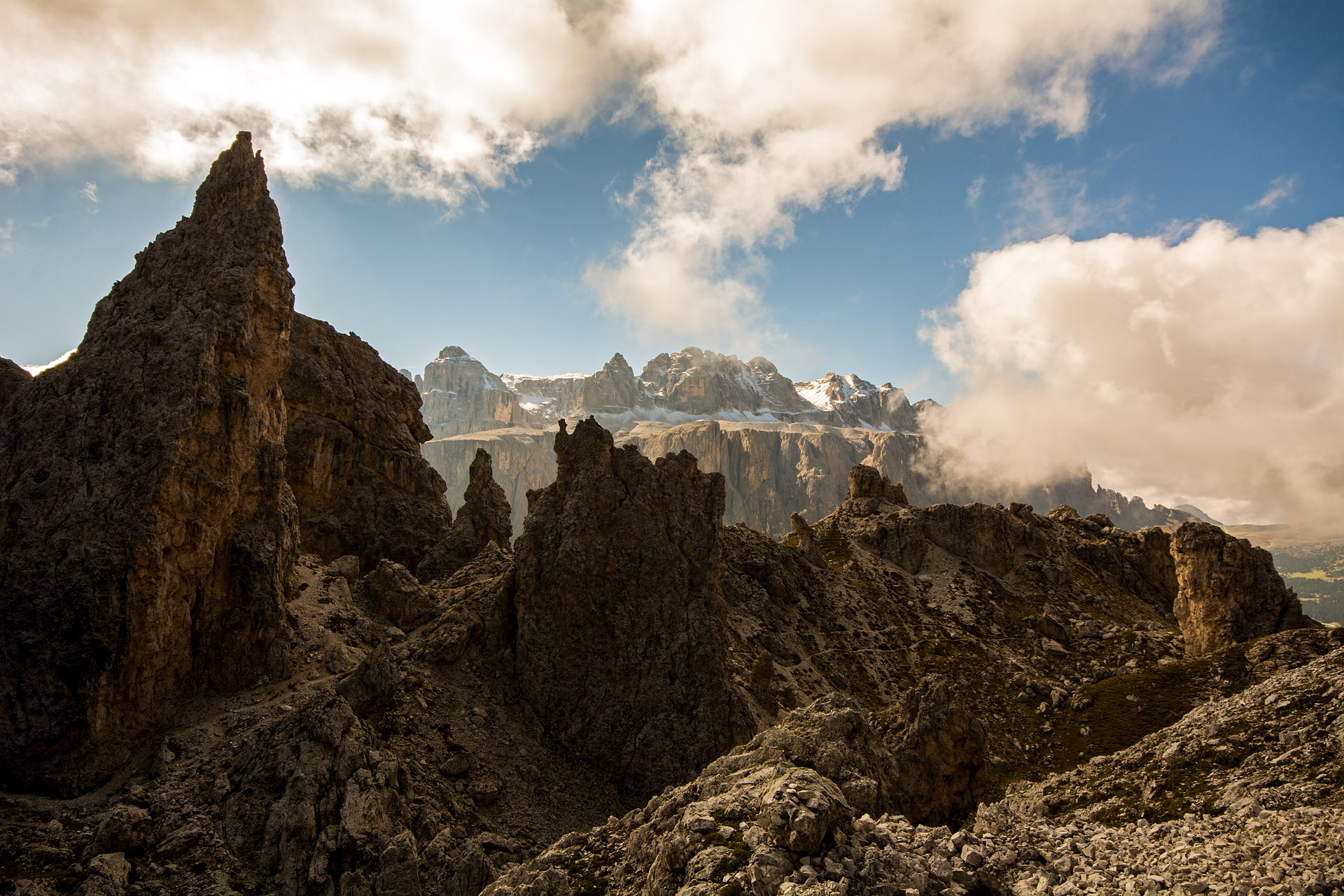 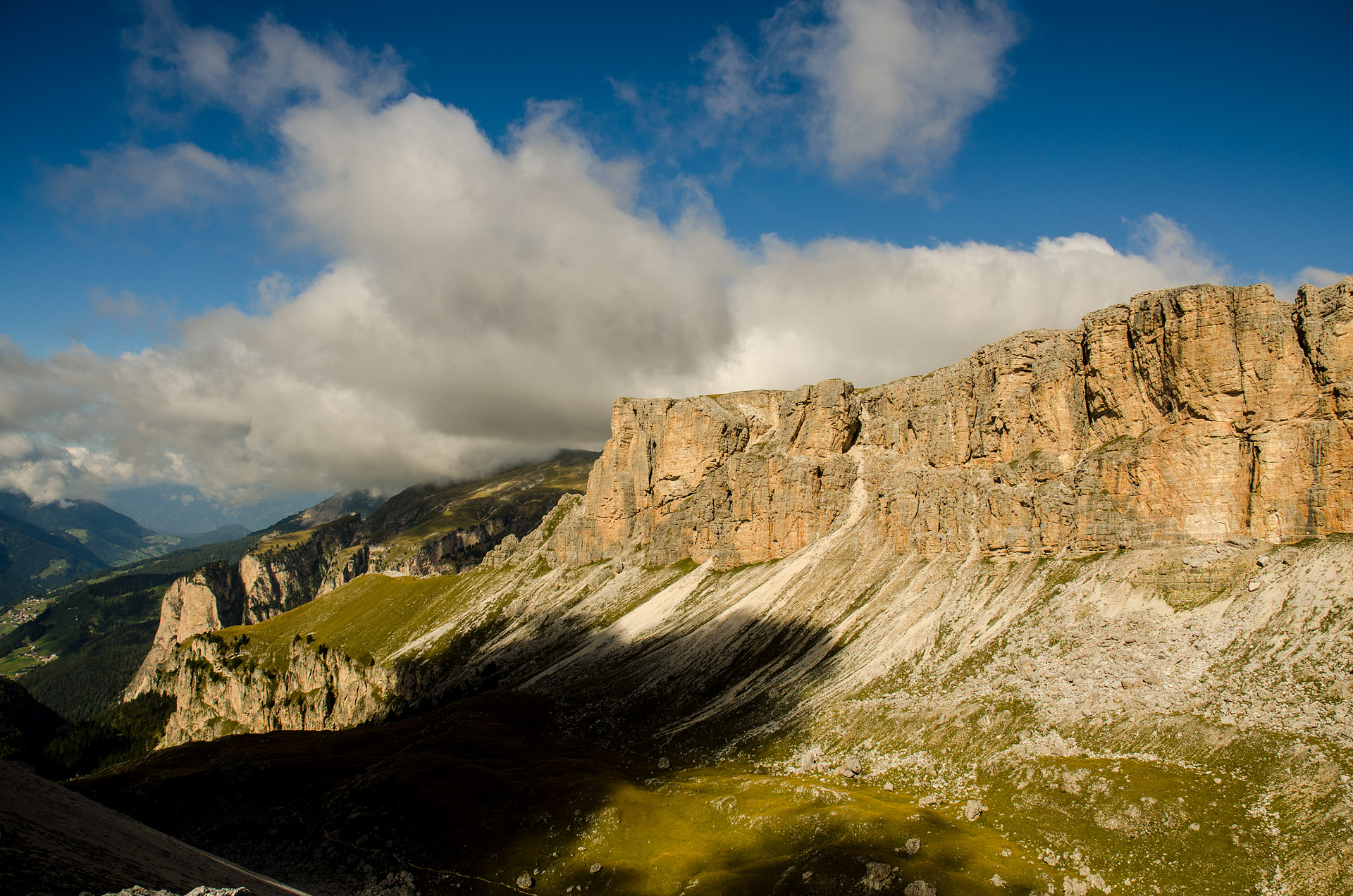 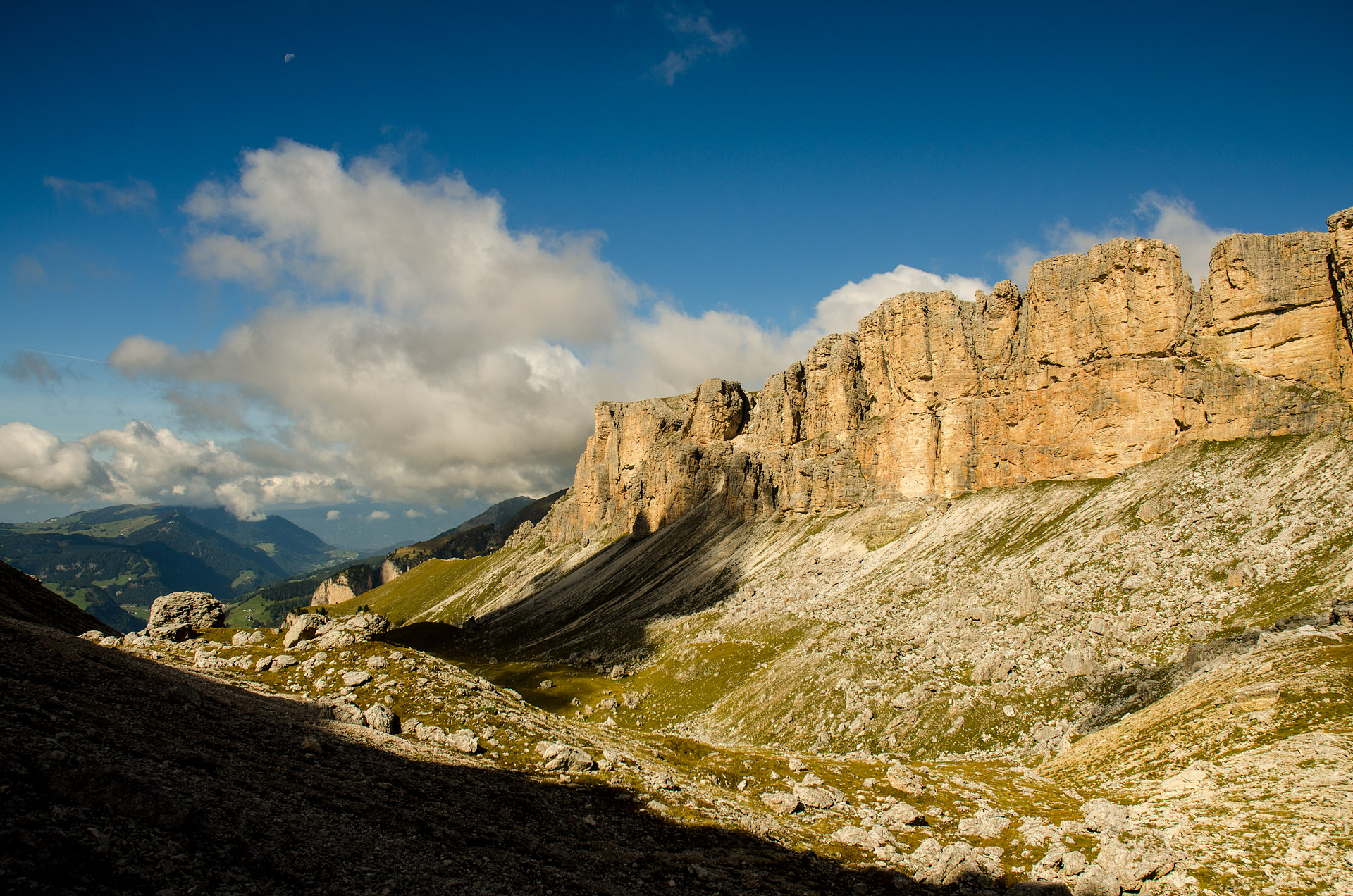 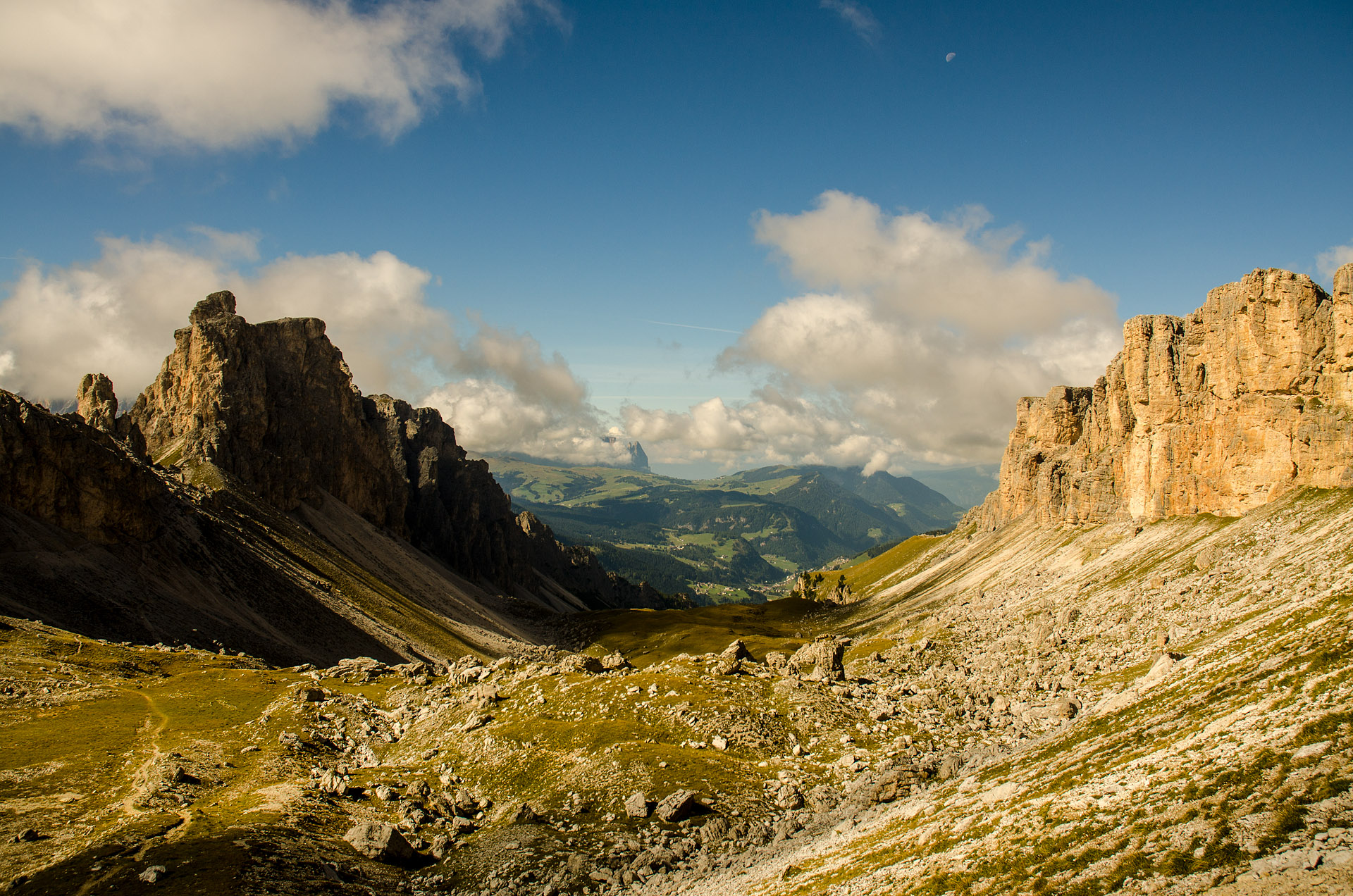 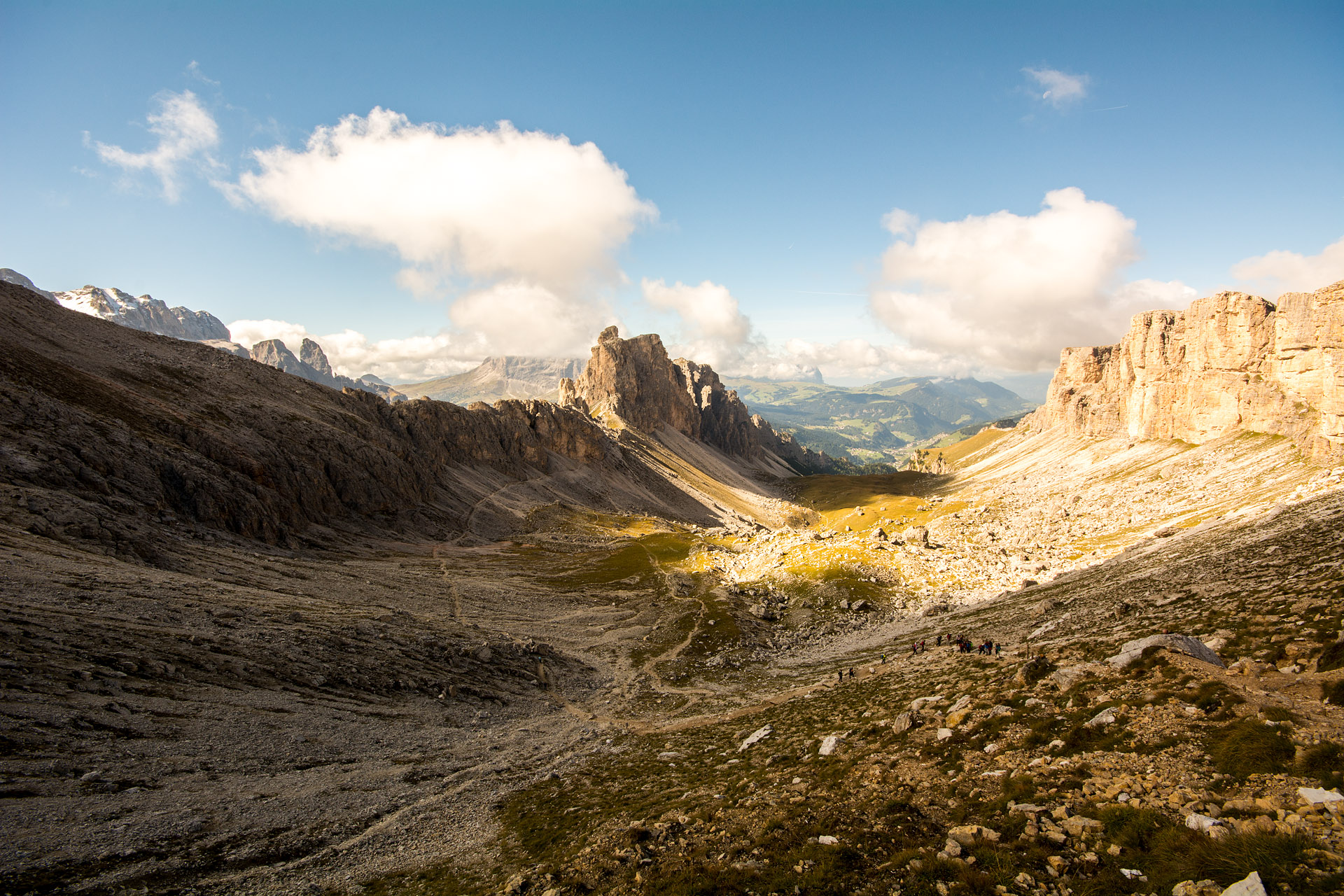 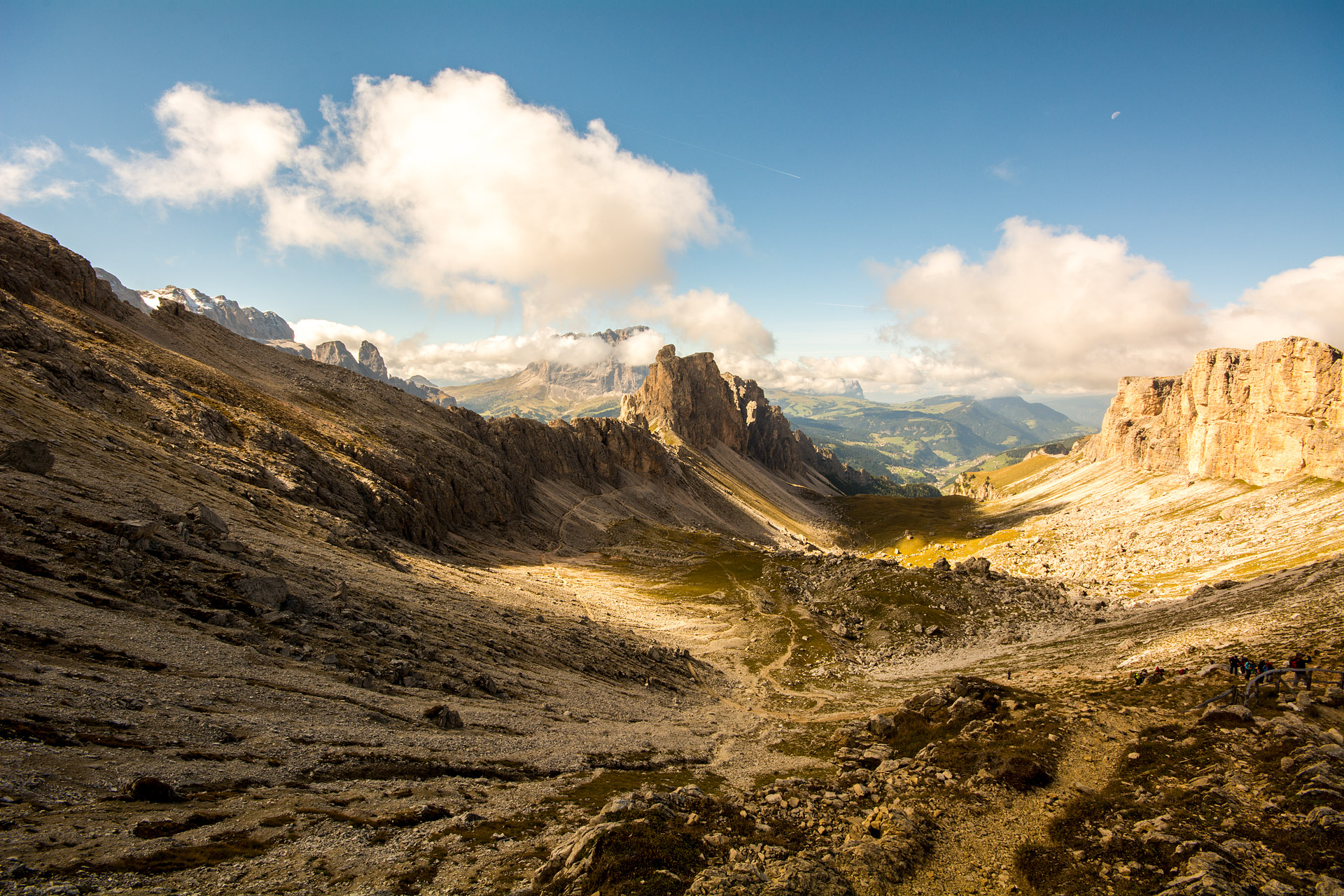 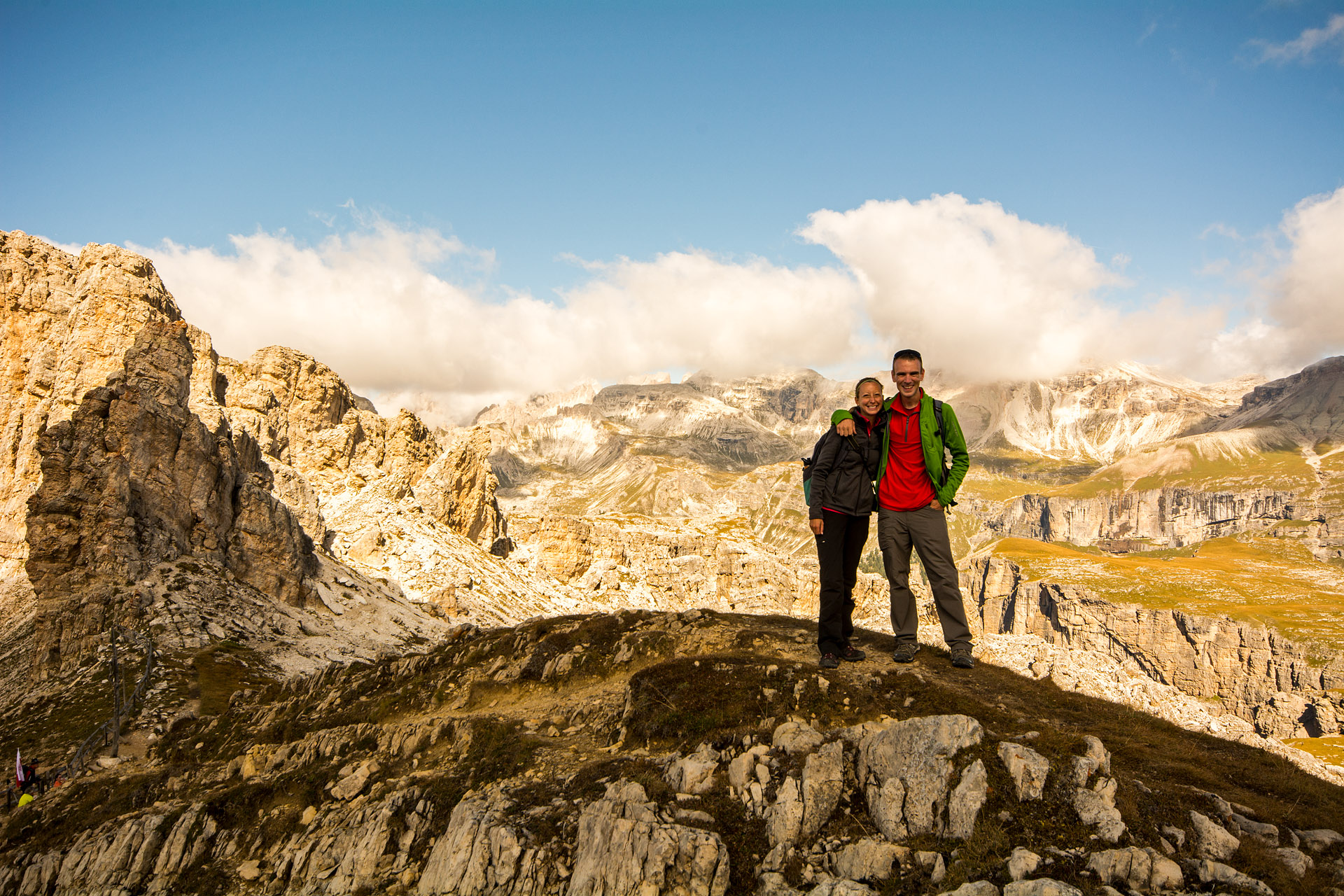 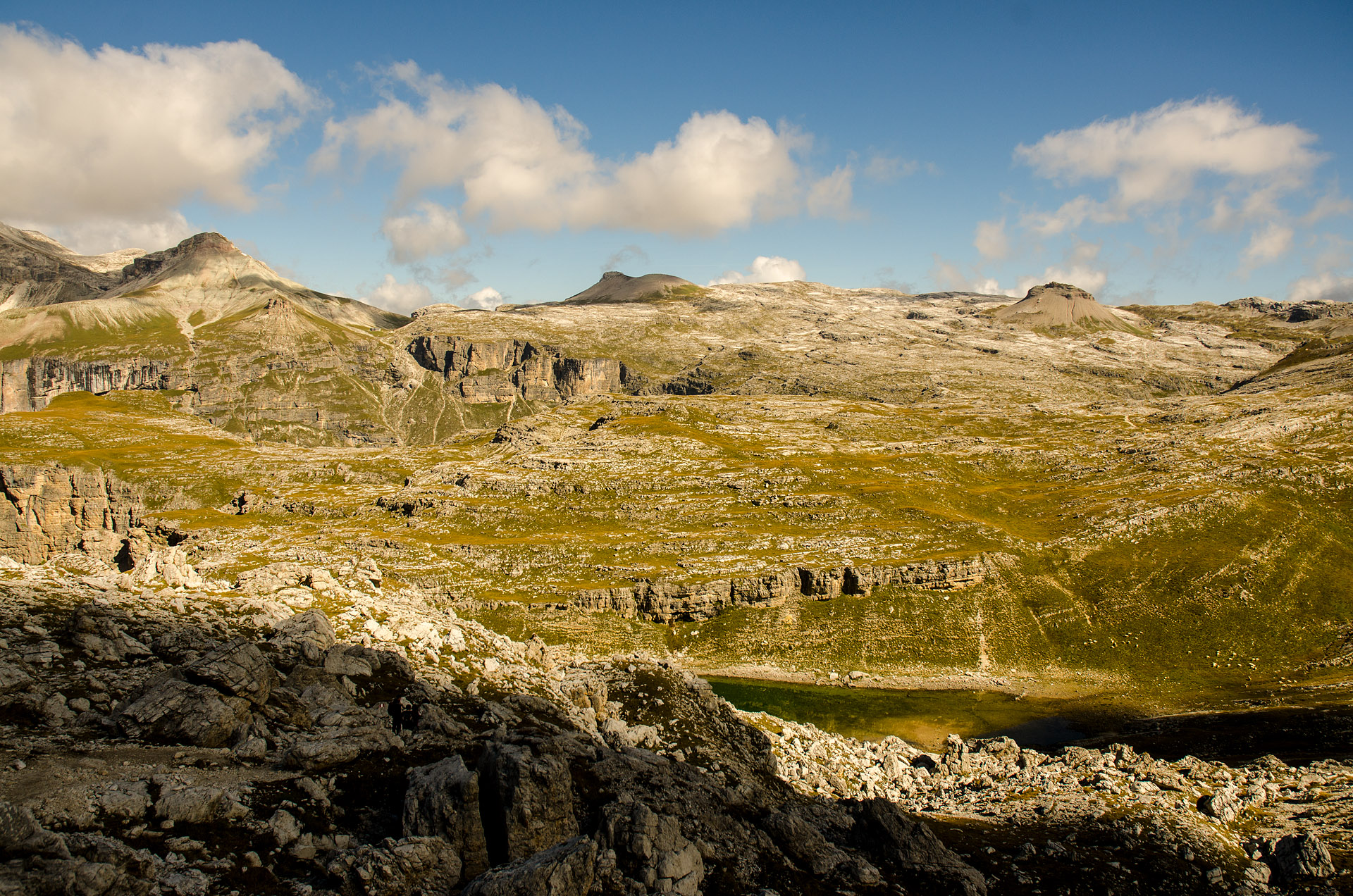 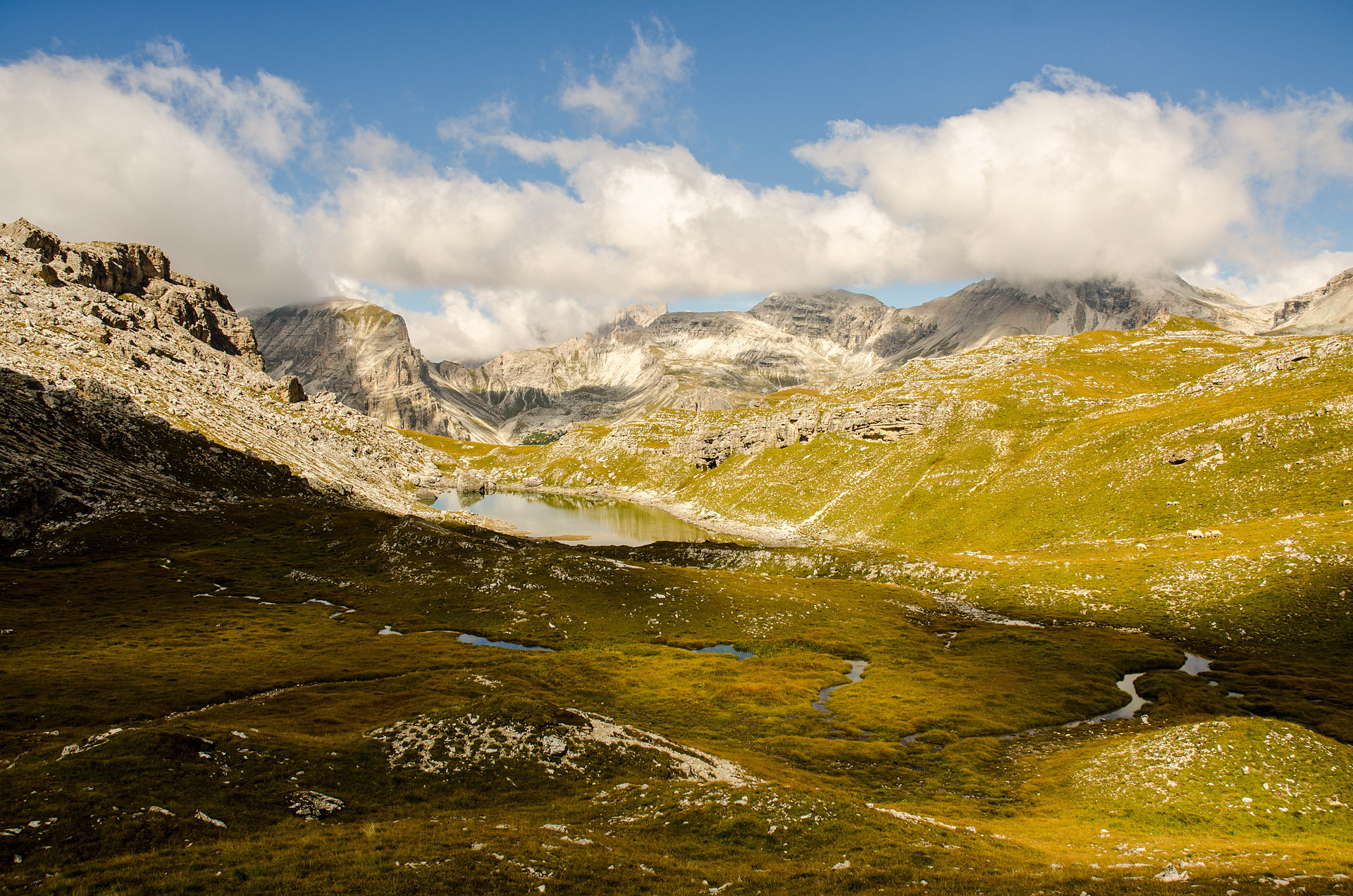 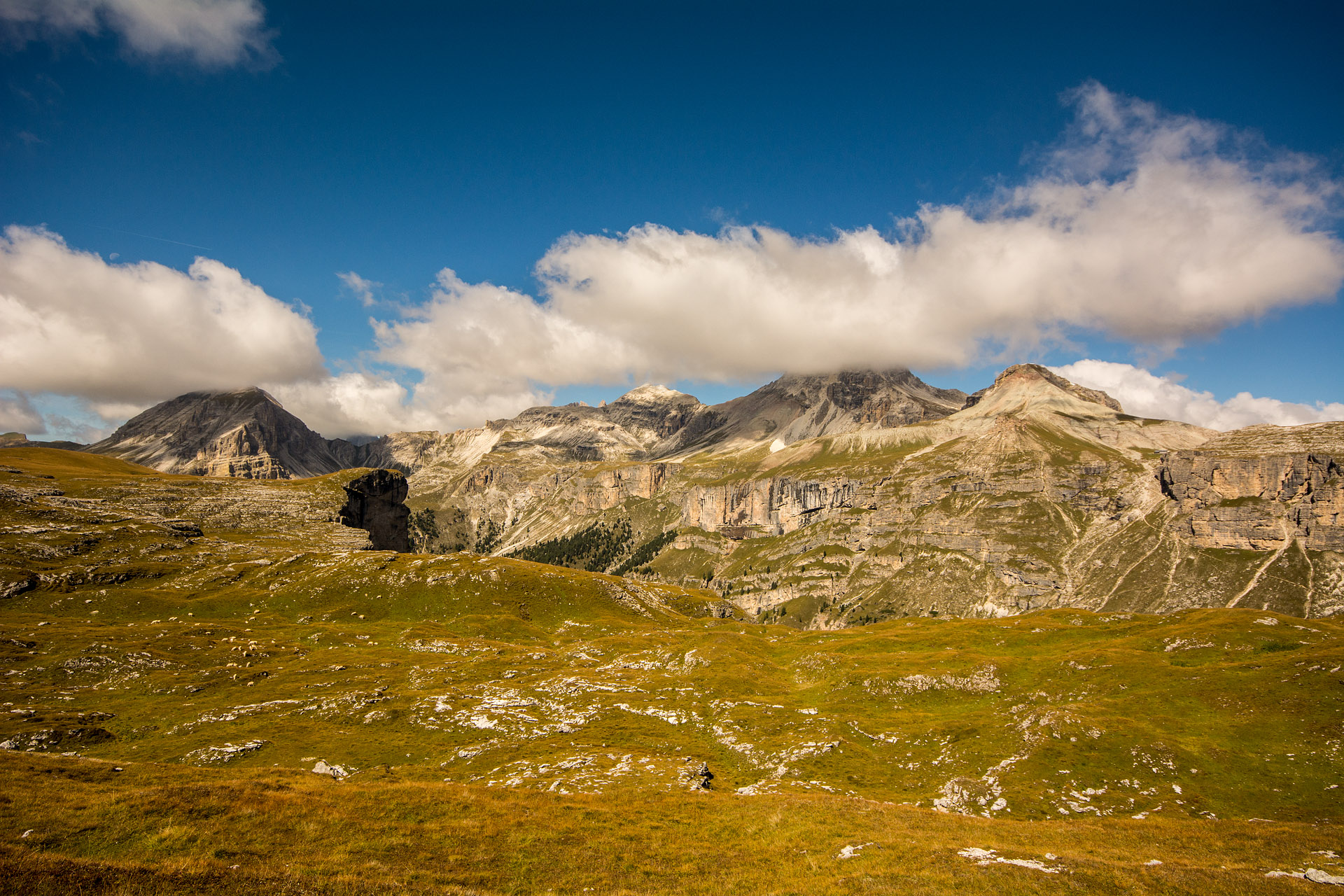 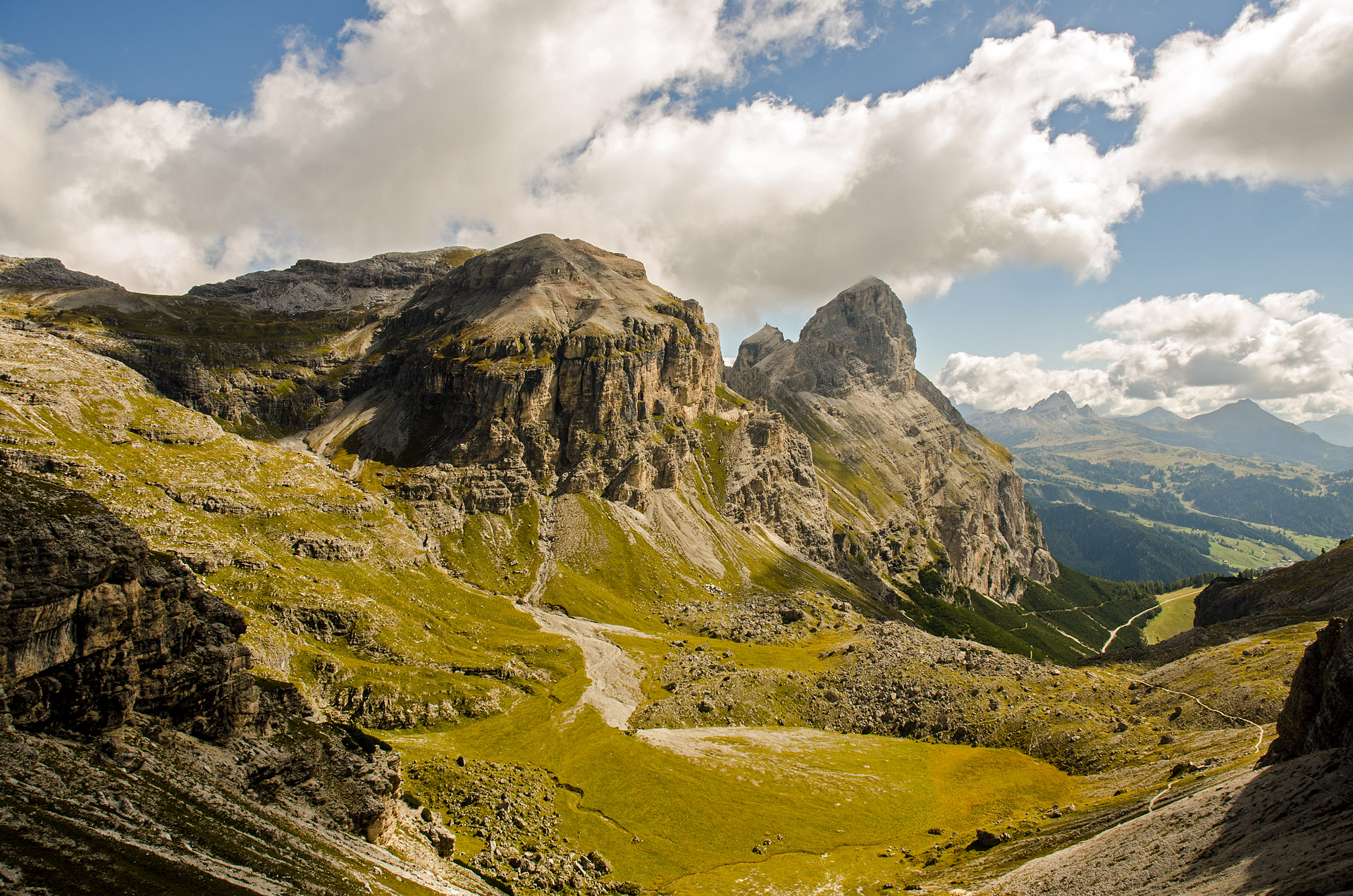 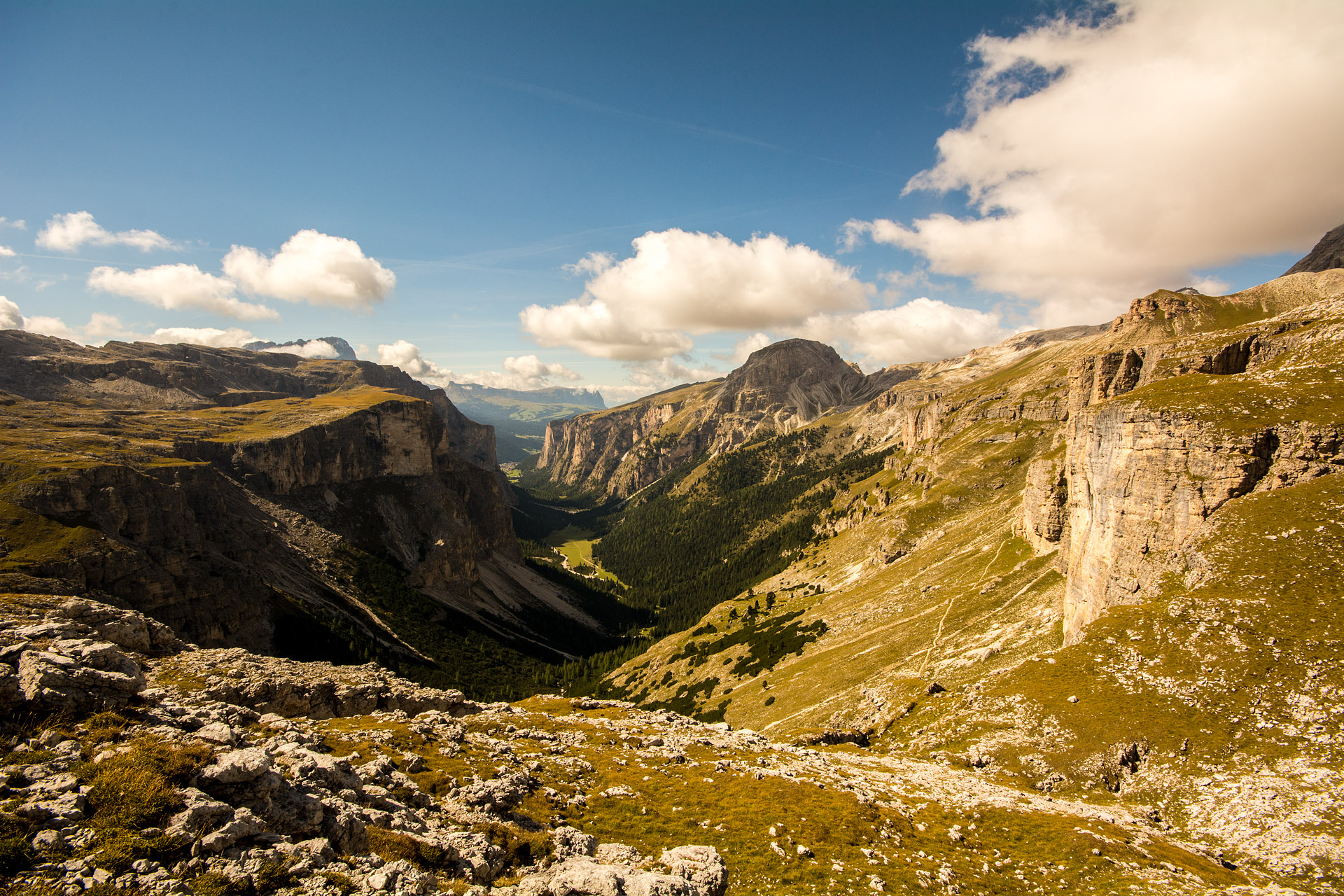 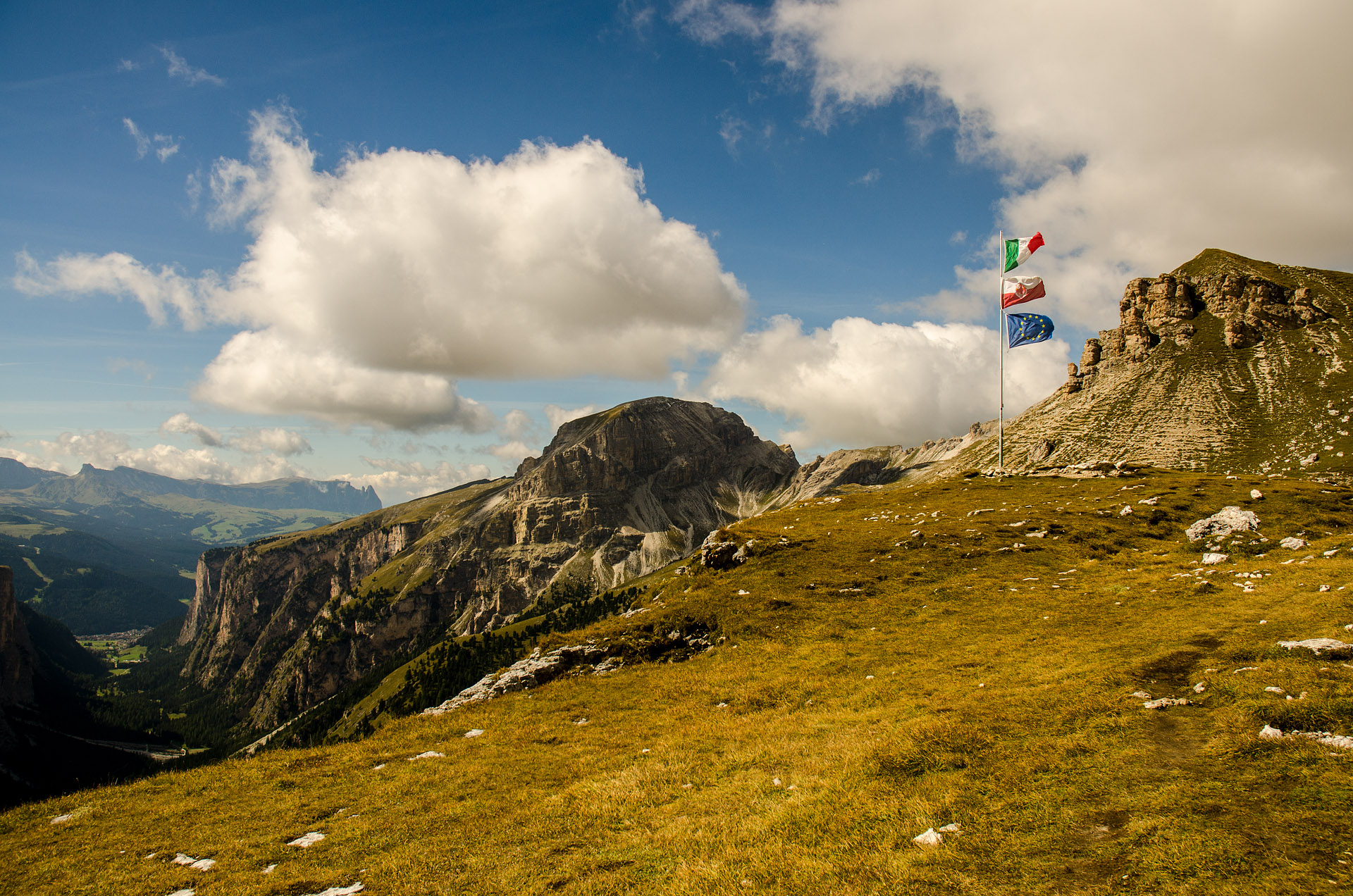 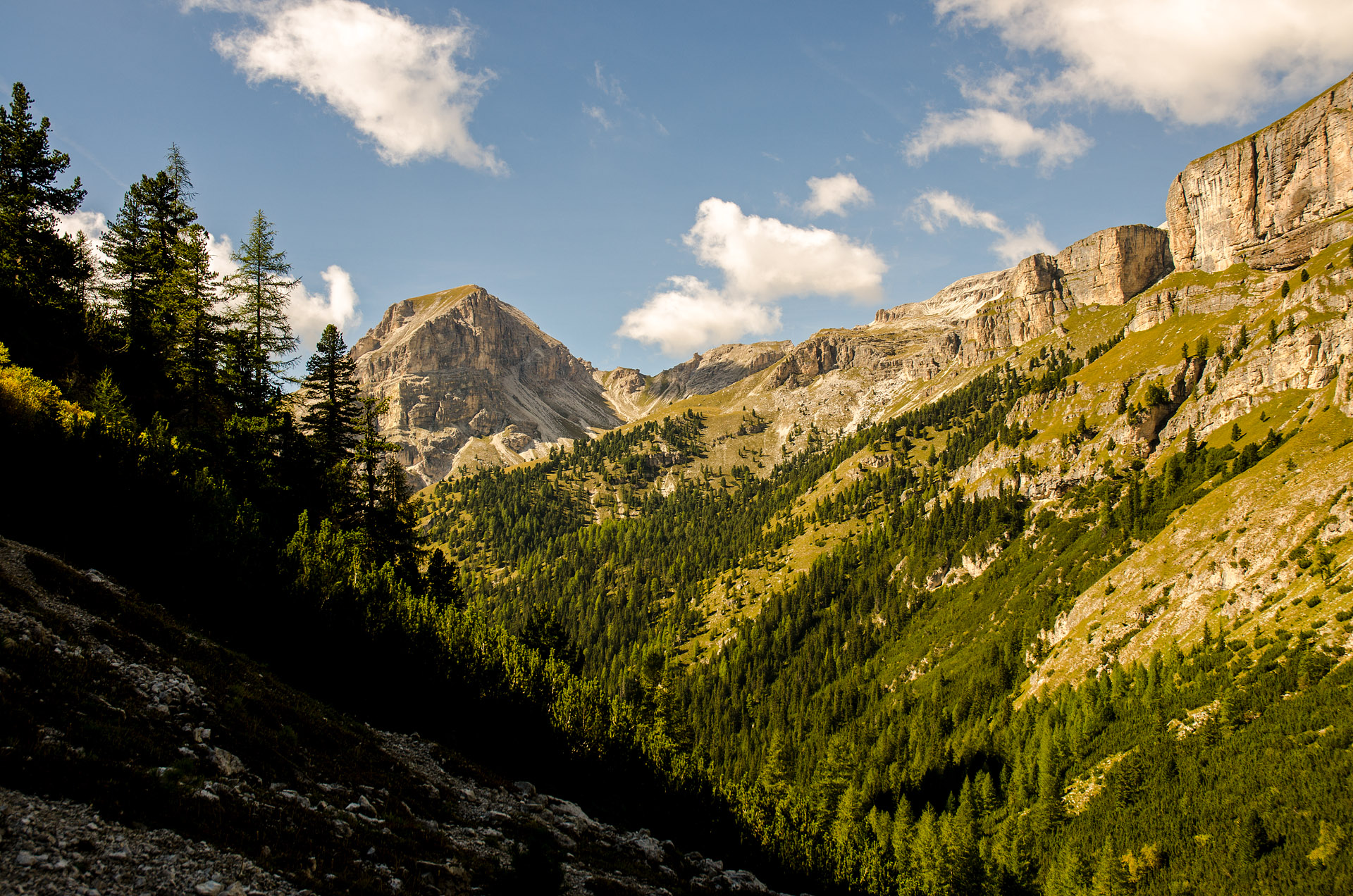 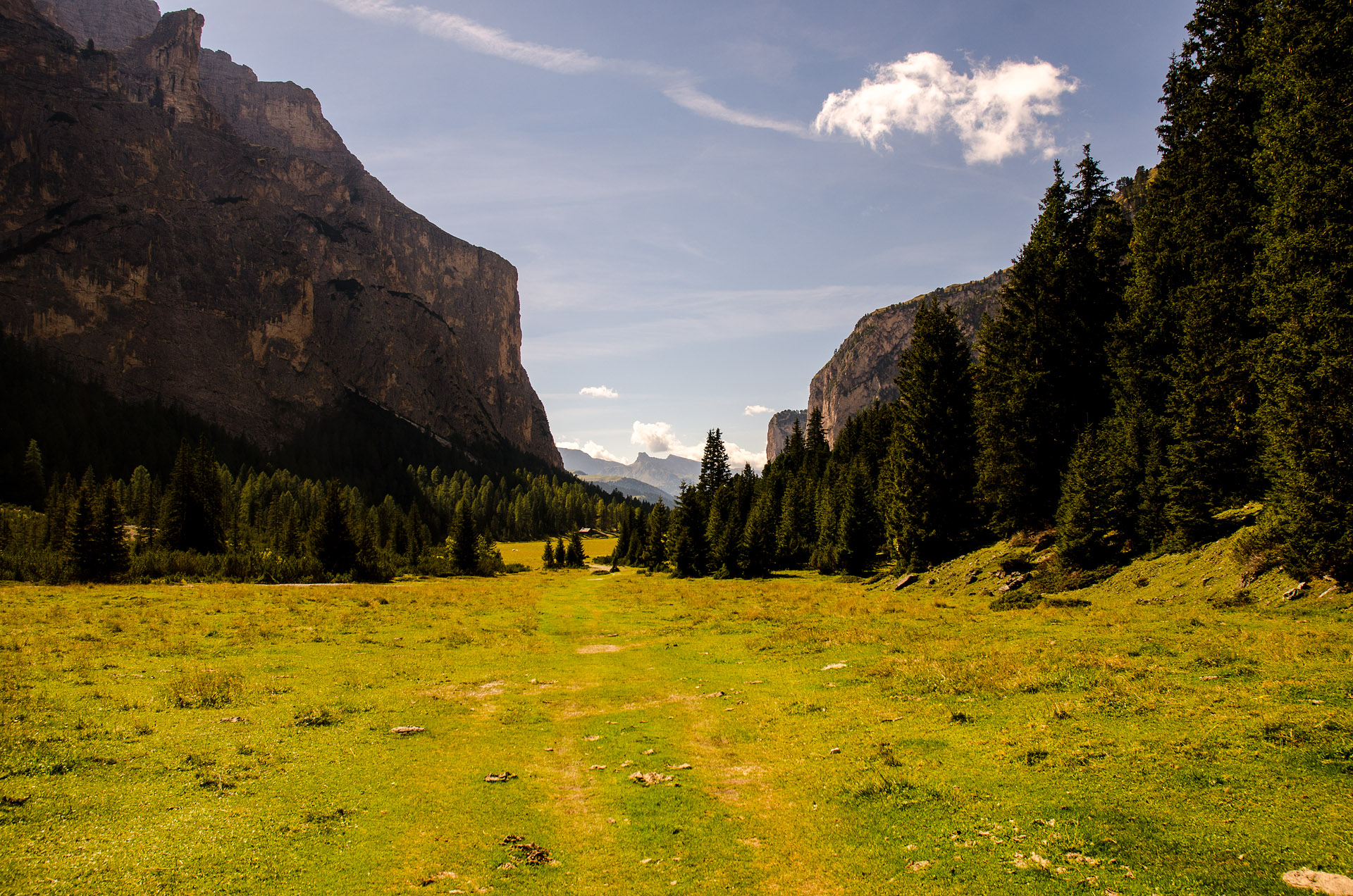 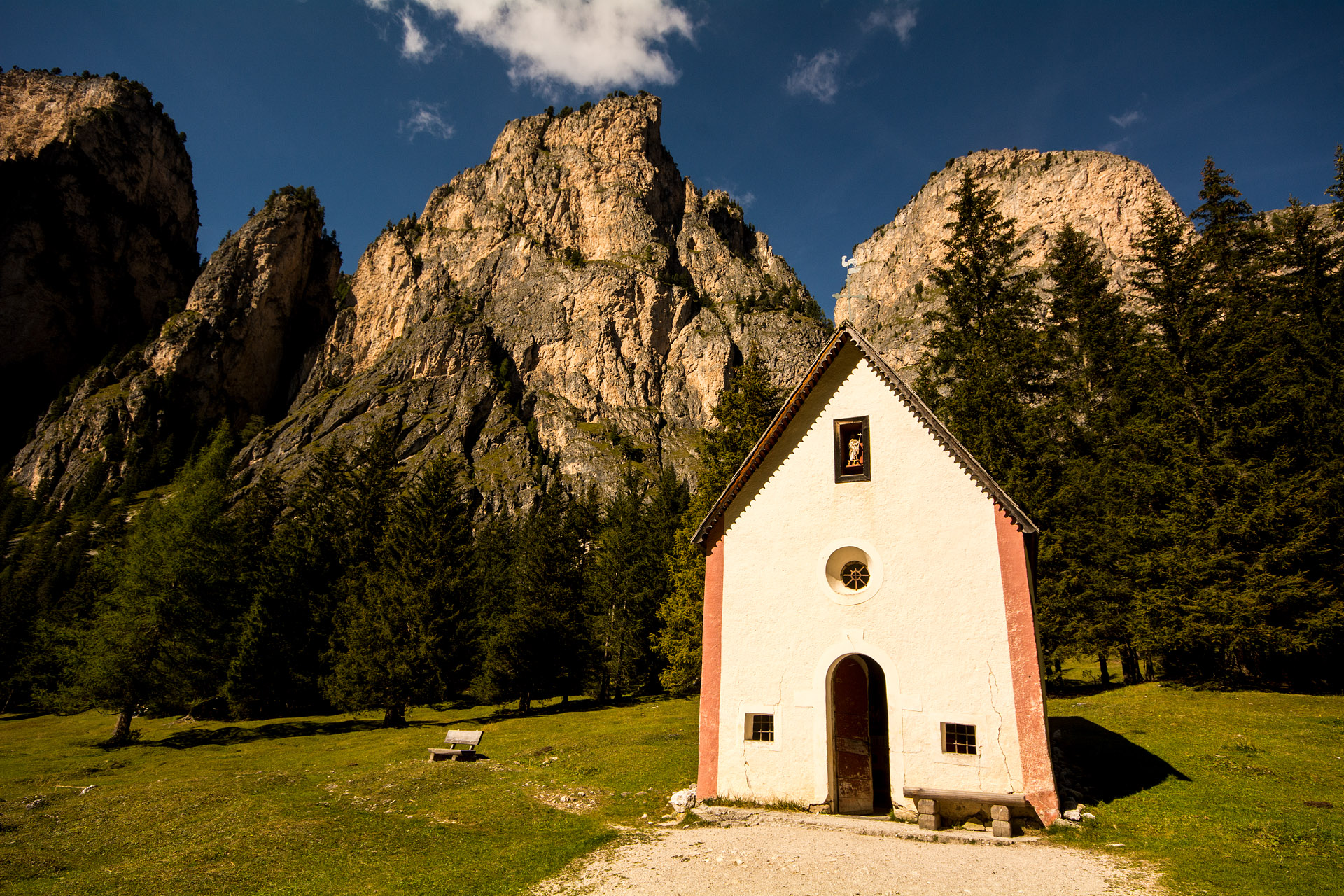 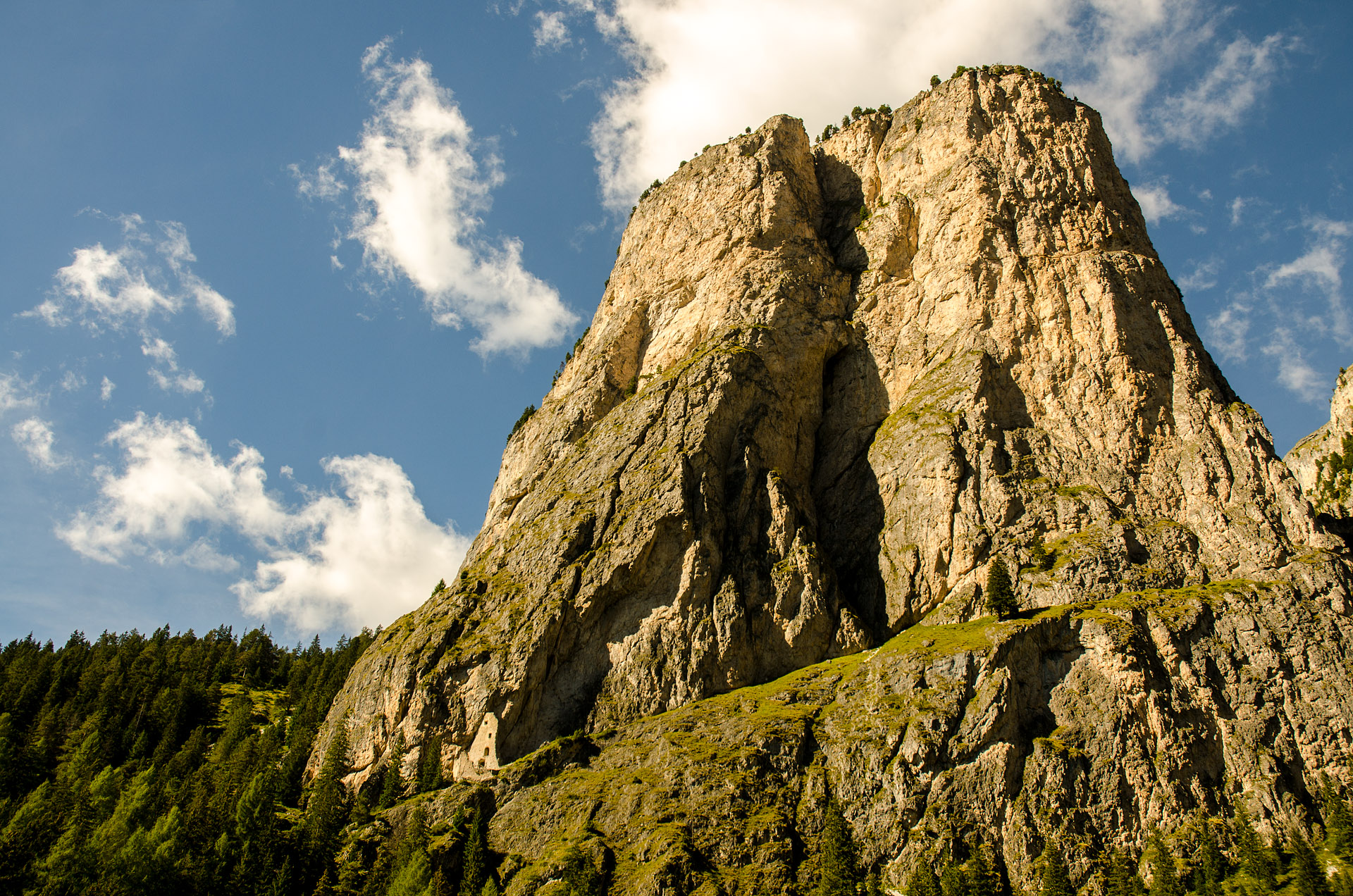 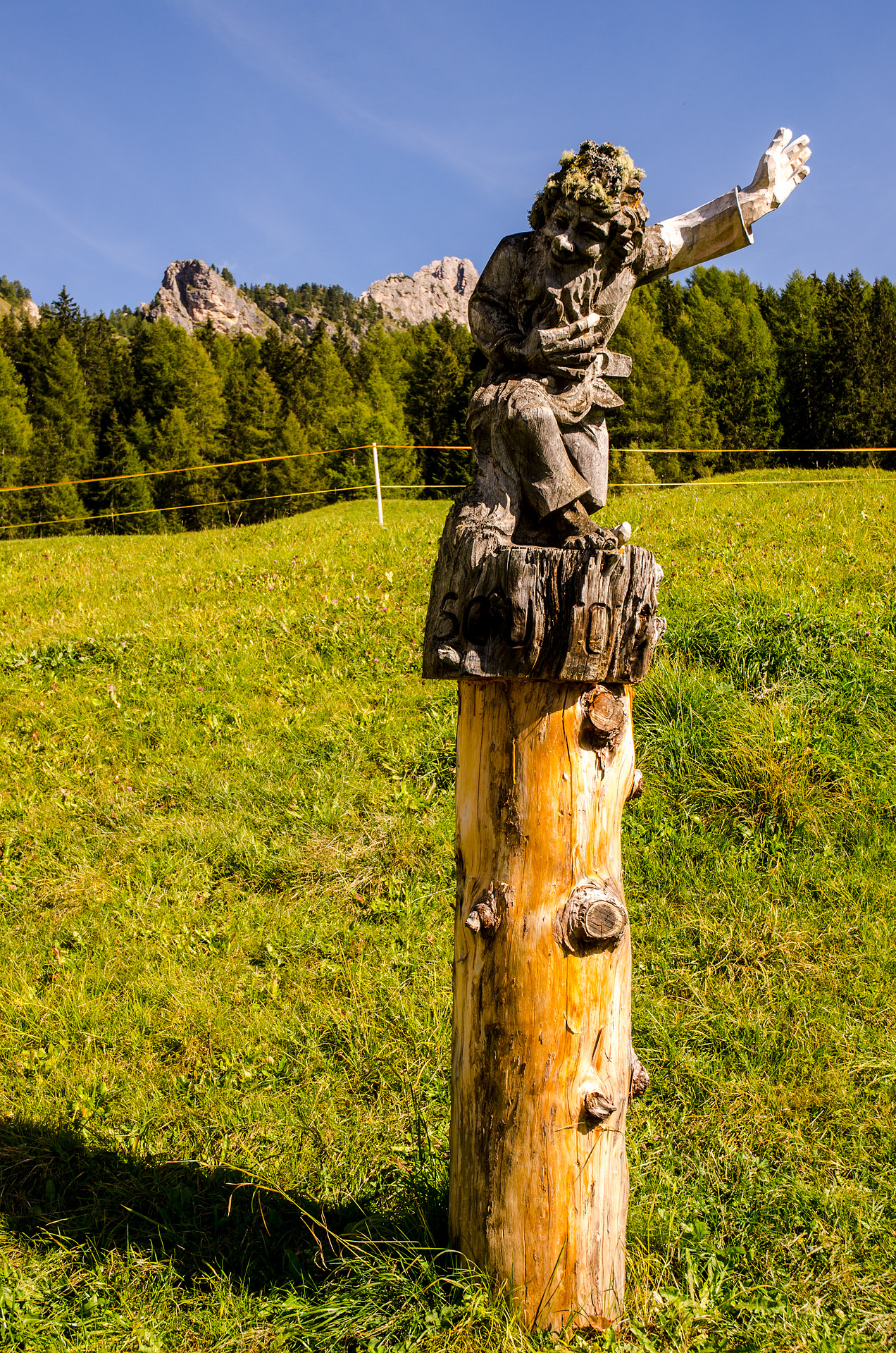 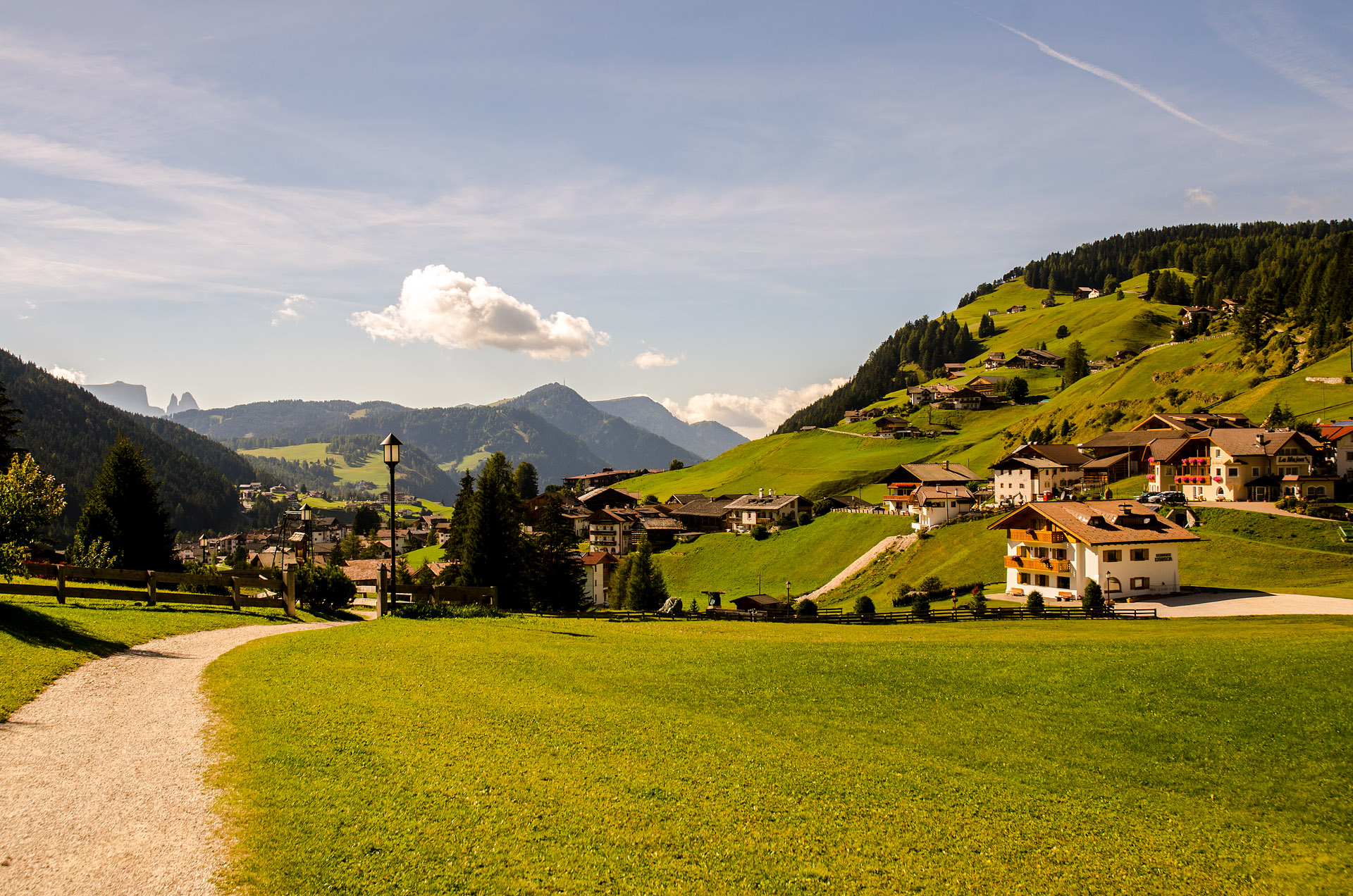 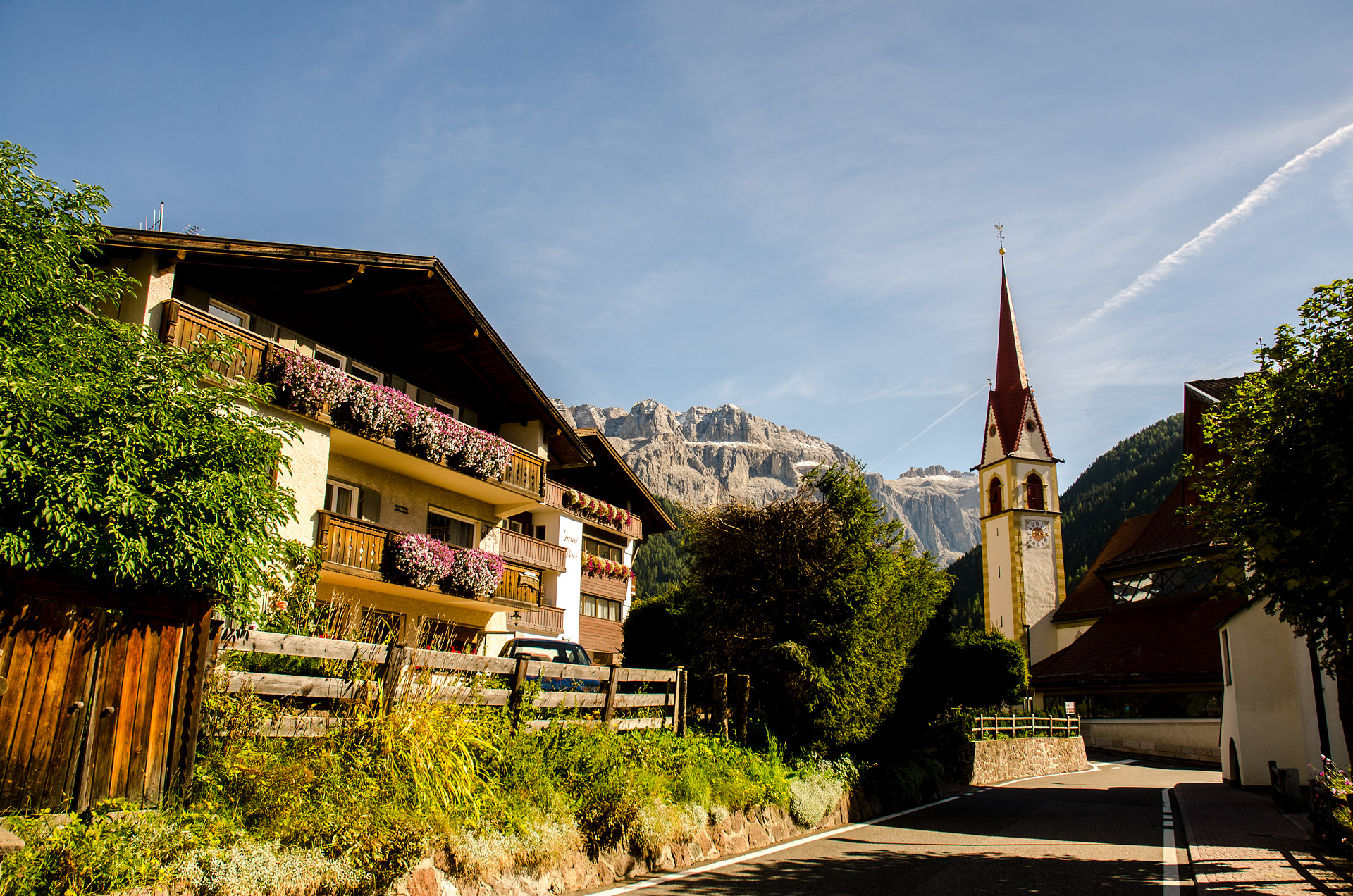 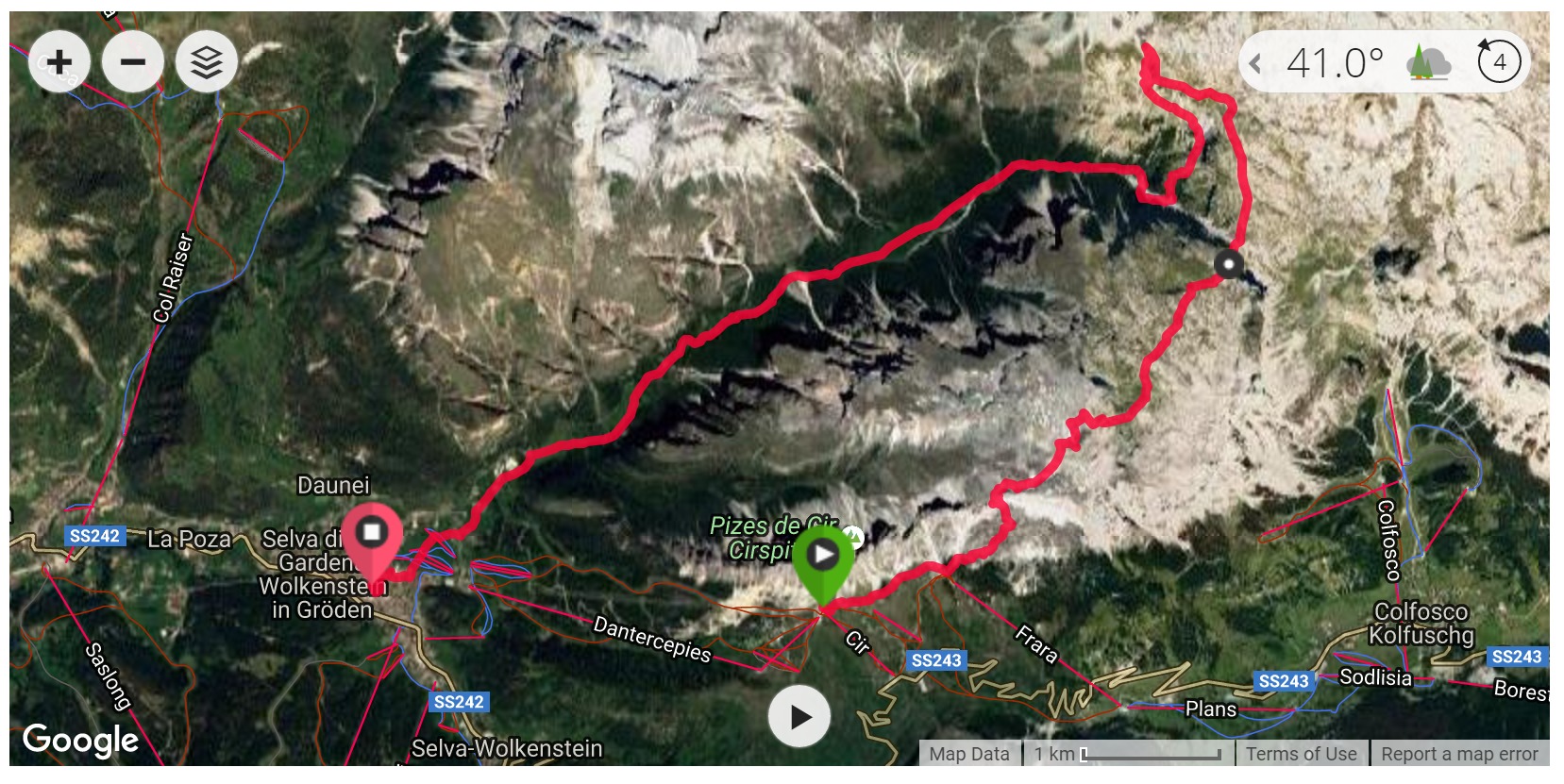 Our track: From the lift station at Dantercepies, we headed up the pass and behind the Cir Group peaks via route 2. We continued following routes 2, 4, and 15 to Rifugio Puez, and descended via route 14, which navigated the Vallunga Valley with a return to Selva.