Considered by many to be the greatest day hike in the country, the Tongariro Alpine Crossing had been atop my New Zealand must-do list for years. So much so, in fact, that I told Stephan I was prepared to park my ass at the base of the looming stratovolcanoes until the weather cooperated for a hike, even if it meant staying in the country indefinitely…

Located about 200 miles north of Wellington, Tongariro National Park is New Zealand’s oldest national park and a sanctioned World Heritage site. The park encompasses a series of active stratovolcanoes, including Mount Tongariro (6,453’), Mount Ruapehu (9,177’), and Mount Ngauruhoe (7,503’), all of which are deemed sacred to the local Maori.

We arrived at the small village of Whakapapa on Sunday, aware that the forecast was predicting a fairly substantial rainstorm to roll in Wednesday morning. Because of the unpredictable alpine climate, hiking the alpine crossing in poor weather is strongly discouraged, and the shuttles to the trailhead won’t even operate if unfavorable conditions are predicted at the higher elevations. We therefore crossed our fingers that either Monday or Tuesday would bring suitable weather and, with luck, maybe even a few rays of sunshine.

When we awoke Monday morning for our 7 a.m. shuttle to the Mangatepopo trailhead, the skies were mostly clear. We quickly checked the weather report and, with a 12-hour forecast for partly to mostly cloudy skies, optimistically boarded the shuttle. Upon arriving at the trailhead, our driver gave us a quick briefing and had us all sign in on a log sheet – park officials are very diligent about accounting for all independent hikers on the crossing, and ensuring all parties return safely. After finally concluding her spiel with the current weather projections, she simply shrugged her shoulders and smiled at us, “it’s going to be a stunner!” With those words, I could hardly contain my excitement.

The trail began in the Mangatepopo Valley, cutting through the bases of Mount Tongariro and Ngauruhoe. Winding through old lava flows and sparse, dry vegetation, the well-manicured track wrapped around the perimeter of the nearly-perfect cone of Mount Ngauruhoe. A striking peak, everyone we passed seemed to recognize it as “Mount Doom,” as they enthusiastically called out while pointing at the rust-hued mountain. I hesitantly asked Stephan if Voldemort (which I mispronounced AND misspelled, as Stephan would like duly noted) lived in Mount Doom. As Stephan rolled his eyes cackling, I quickly learned that the antagonist from Harry Potter apparently never paid a visit to the iconic Lord of the Rings locale. I am fairly certain (1) that I was the ONLY person on that trail completely ignorant to all things Lord of the Rings, and (2) that my movie naivety made my best friend cringe with shame, if she happened to read this. Regardless of what fictional adversary occupied “Mt. Doom,” however, its ominous, symmetrical cone was quite a spectacular backdrop for the hike. 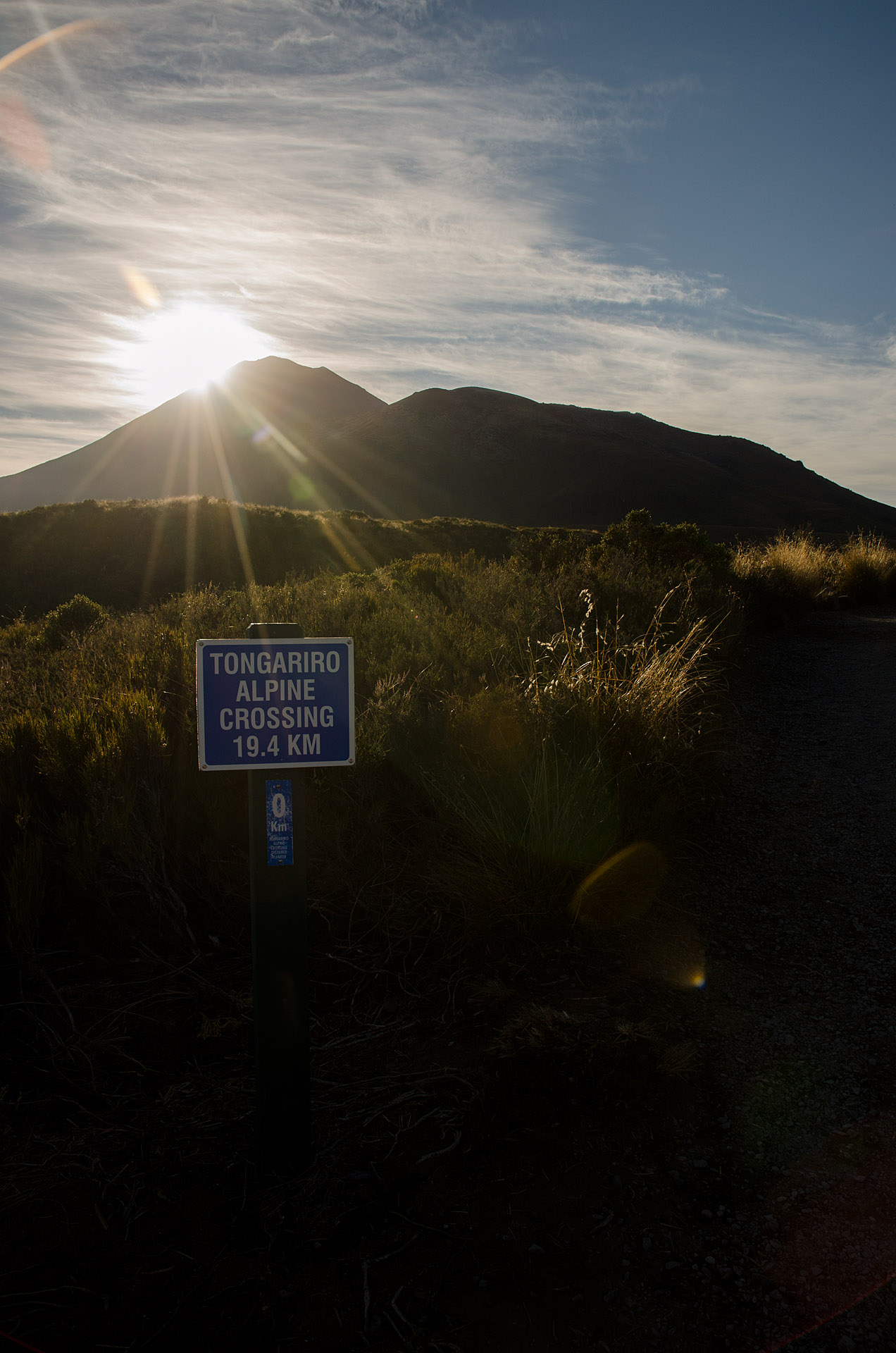 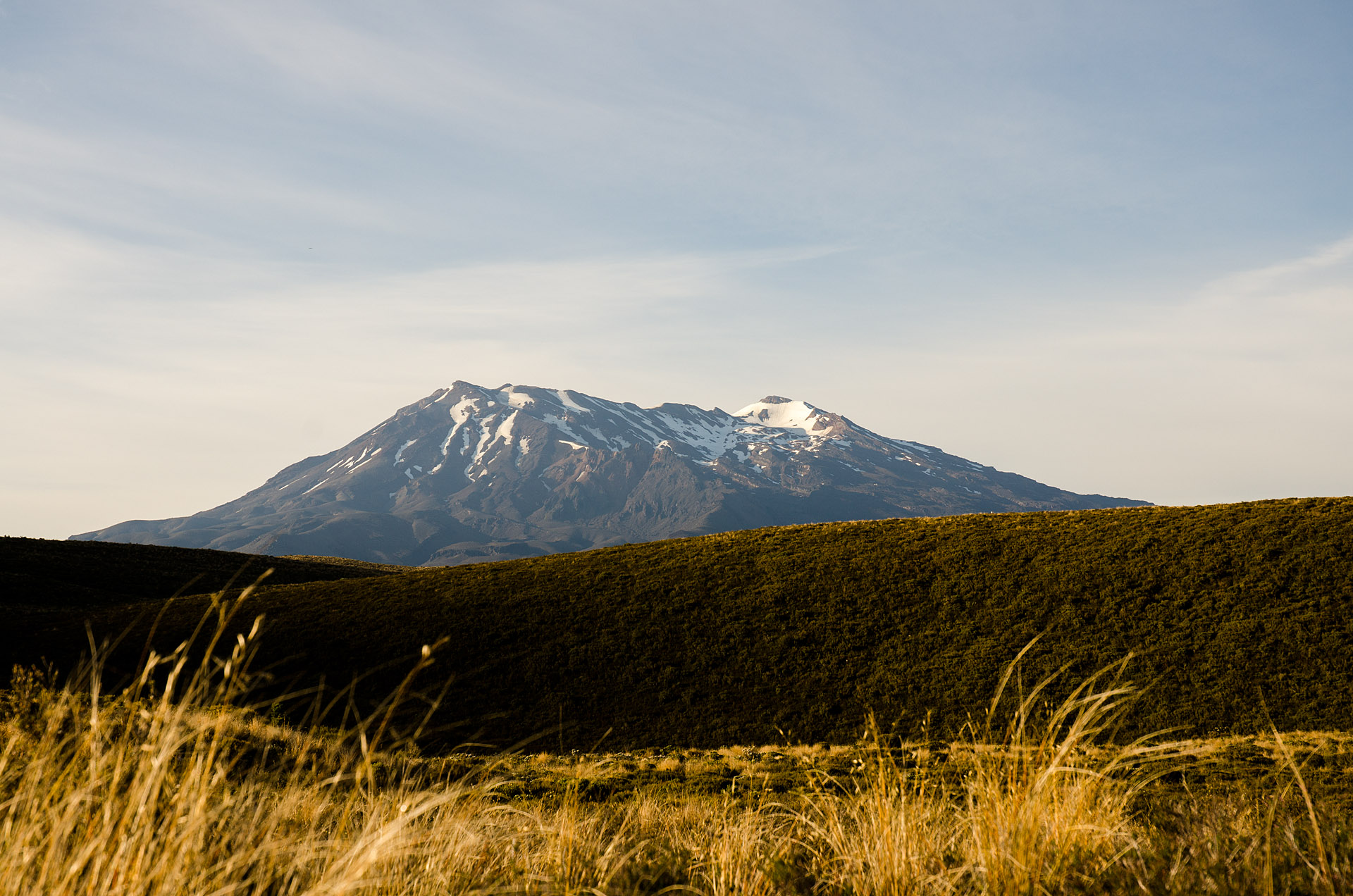 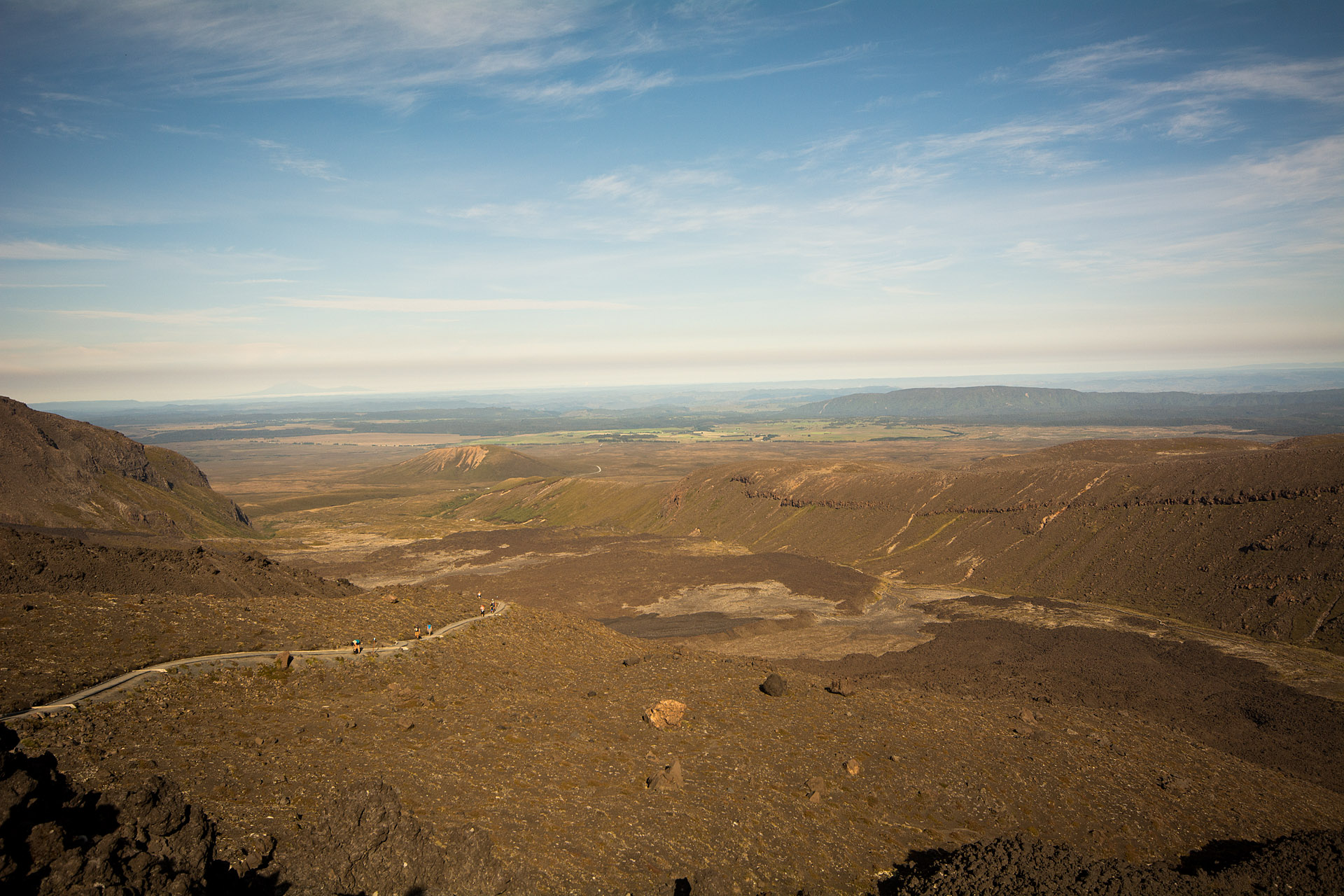 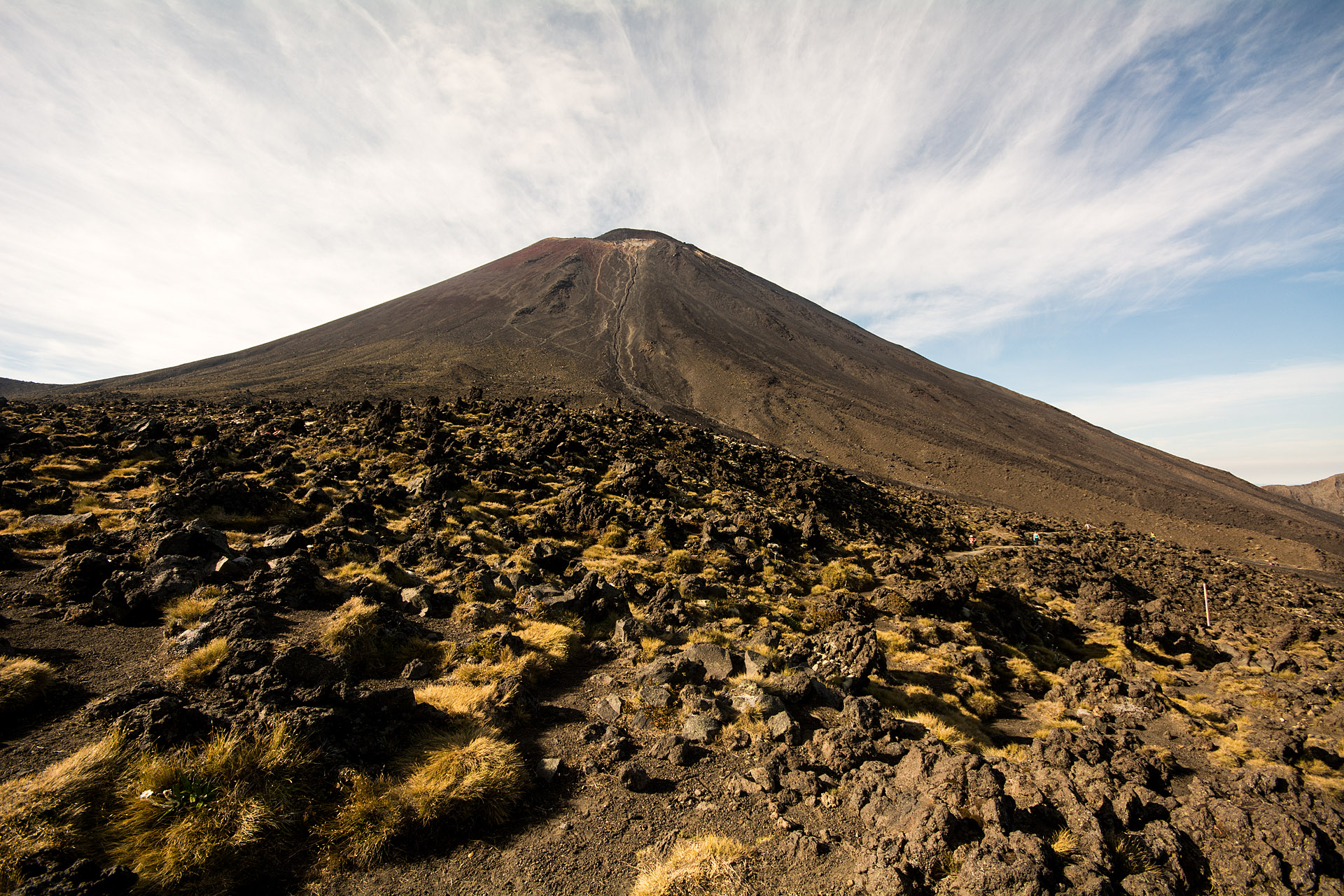 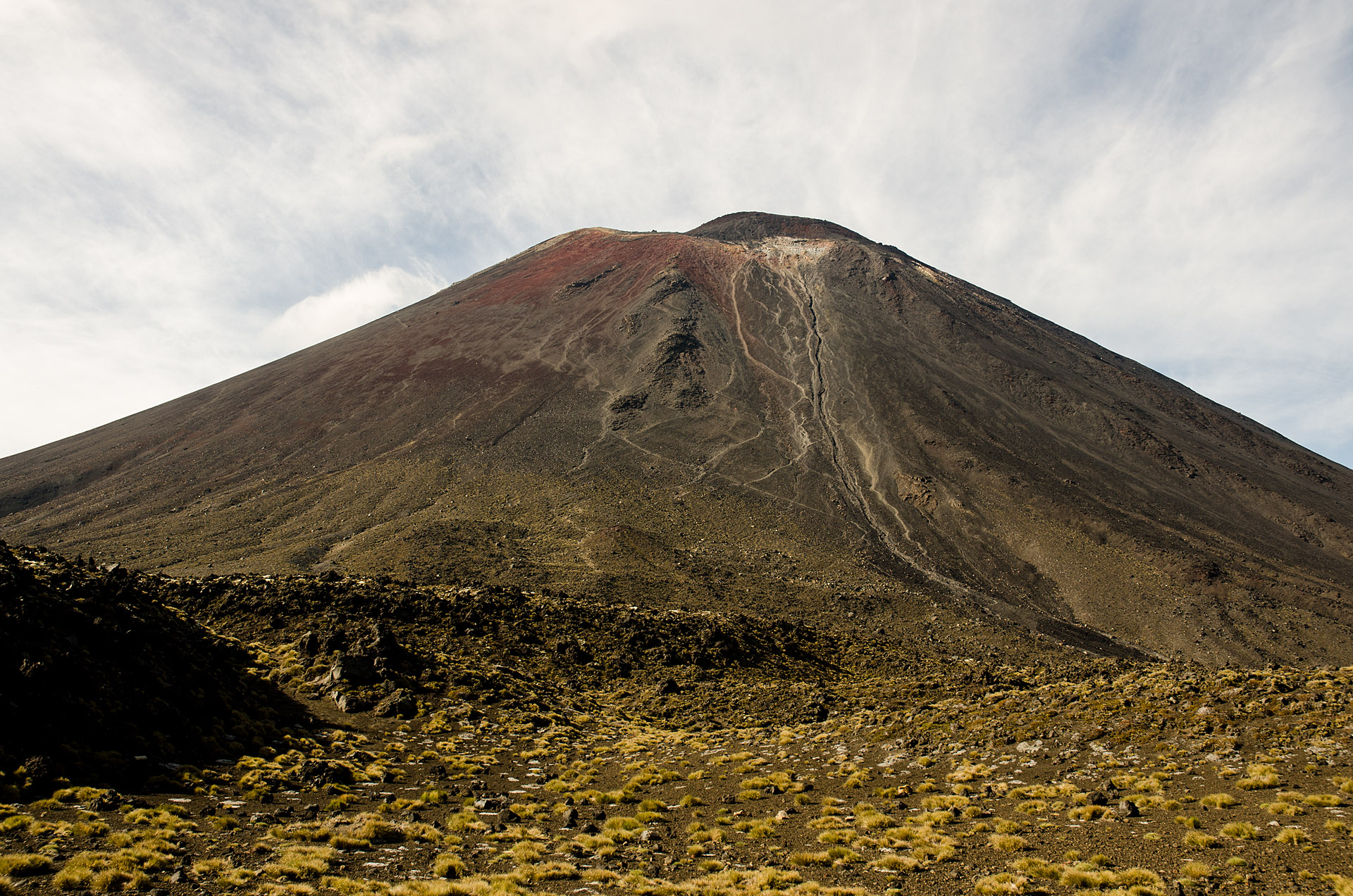 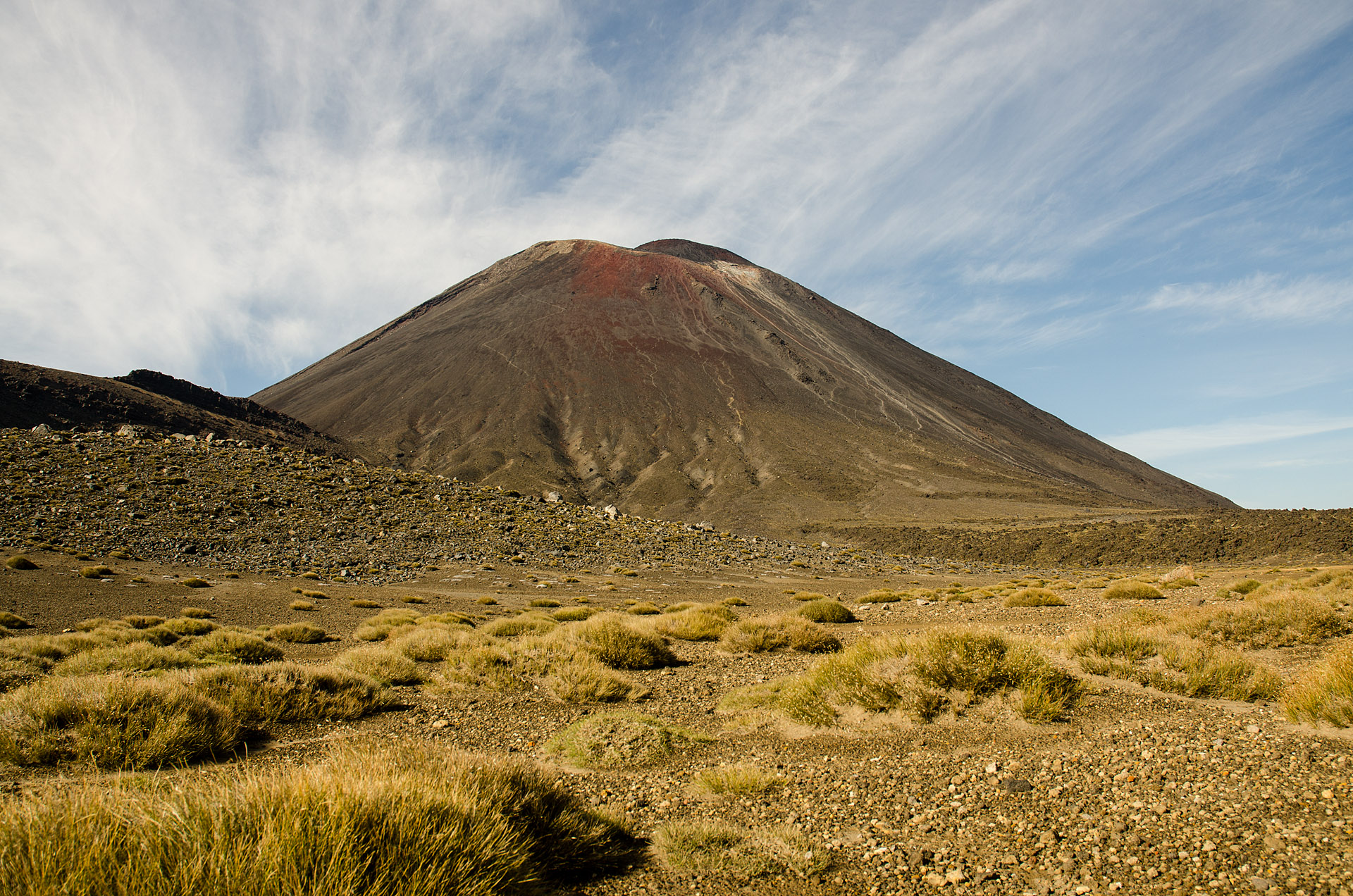 We continued through the valley to the first moderate climb, which in turn quickly descended into the South Crater – a vast, barren landscape with nothing but one small pool of murky, brown water alongside the well-worn trail. As we traversed the crater floor, we passed beneath the northeastern slopes of Ngauruhoe, which were now washed a deep crimson near the summit. The track again climbed moderately to a small ridge, overlooking the South Crater behind us and the remaining climb to Red Crater ahead. As we paused here for water, I noticed a sign to the left pointing to Tongariro Summit, a side trek of only 3 km return. I kept my mouth shut (for once) and continued ahead on the ascent to Red Crater. It was only a few minutes before I couldn’t stand it anymore (obviously) and asked Stephan if we could do the bonus track. How could I really walk past that inviting signpost to Tongariro, knowing I may never be back again? Stephan liked the idea, but thoughtfully suggested we push ahead to the crater (overlooking the iconic Emerald Lakes) to not risk missing the currently sun-drenched volcanic lakes I was so excited to see. Thus, we agreed to continue to the top and reevaluate from there. 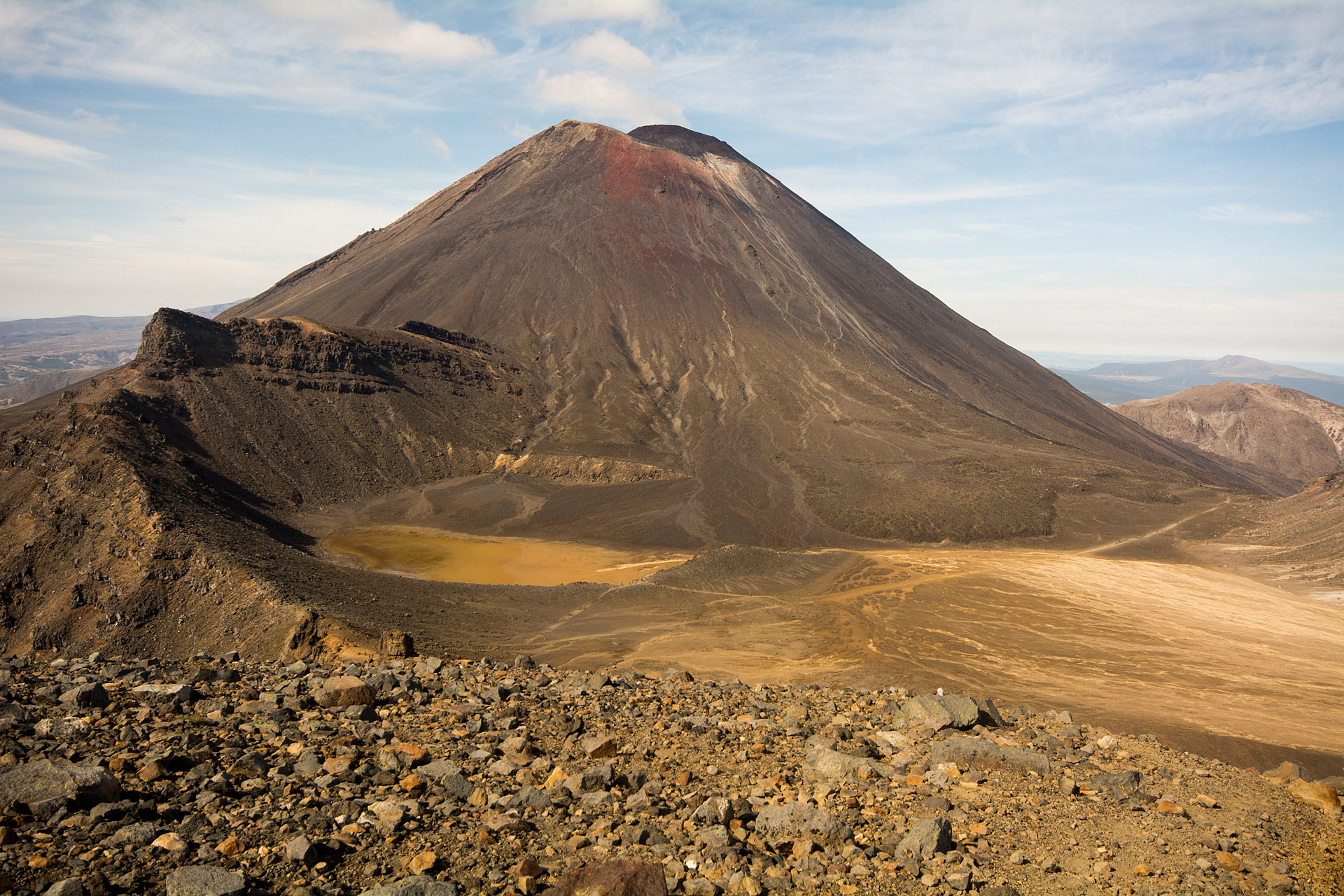 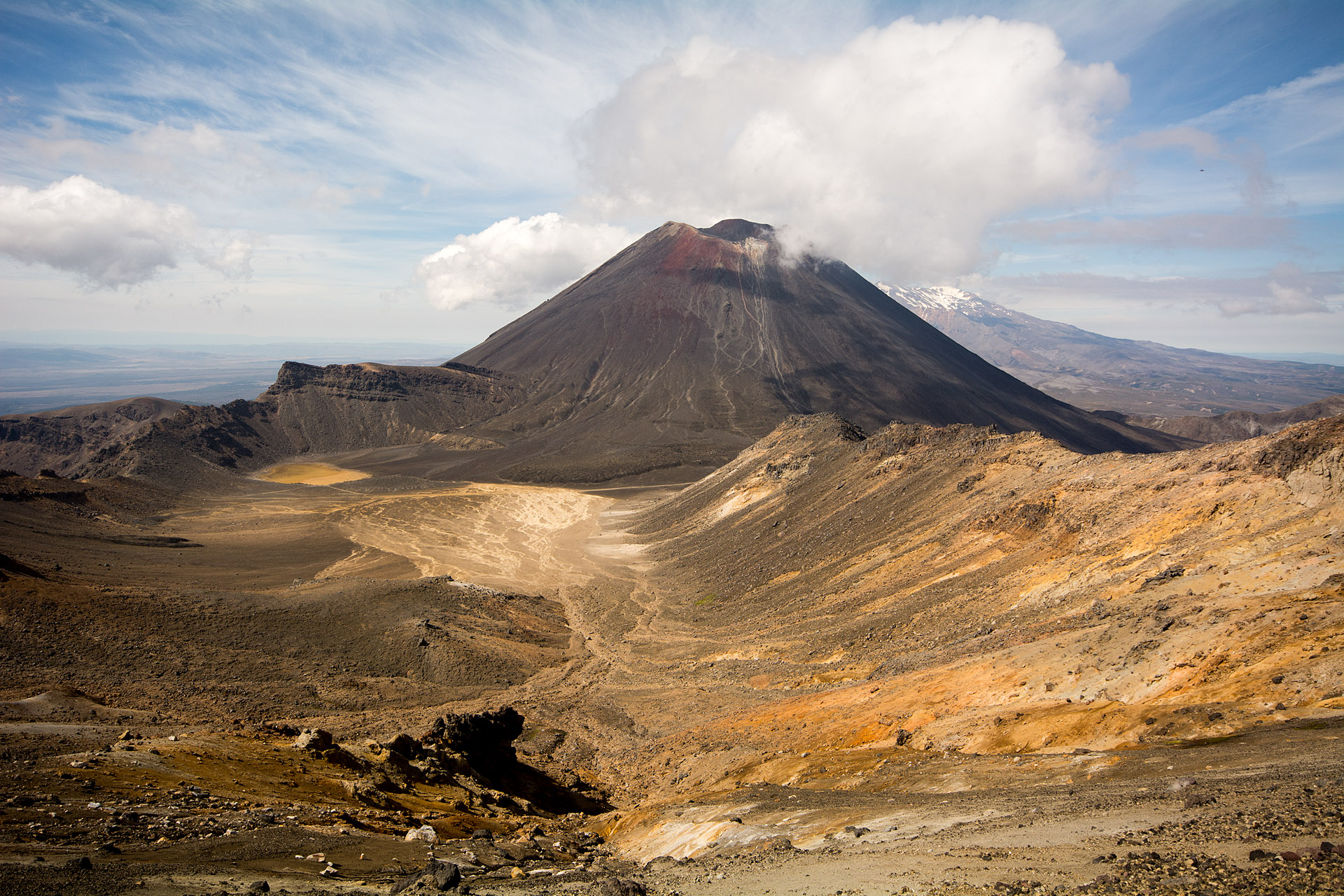 When we reached the highpoint at the Red Crater (6,188’), we were taken aback by the dramatic caldera. Aptly named, the gaping depression was stained a rich burgundy hue from the oxidation of iron within the rock, and a cavernous, craggy lava tube jutted out from the crater wall opposite the trail. As we strolled along the rim, we noticed a sudden increase in temperature, and subsequently spotted small wisps of venting gas just off the trail. Interestingly, because of the thermal warmth around the Red Crater’s perimeter, this particular area typically remains free of snow, even during the frigid winter months. As we glanced ahead to our east, the azure waters of the immense Blue Lake dominated the landscape, while the striking green Emerald Lakes burst from the otherwise stark, volcanic terrain. The view was just breathtaking, and each lake shimmered with an iridescent sheen in the mid-day sunlight. 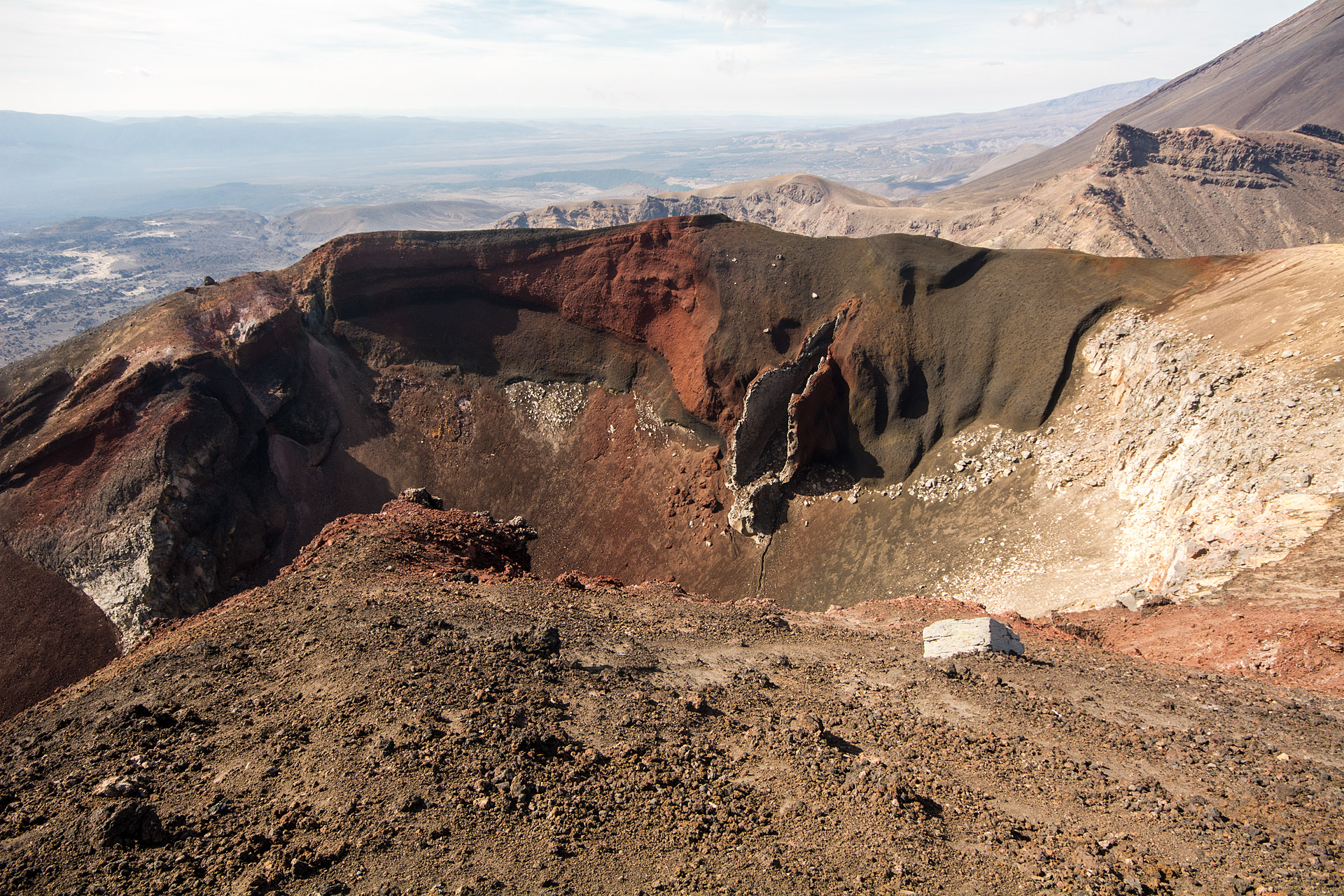 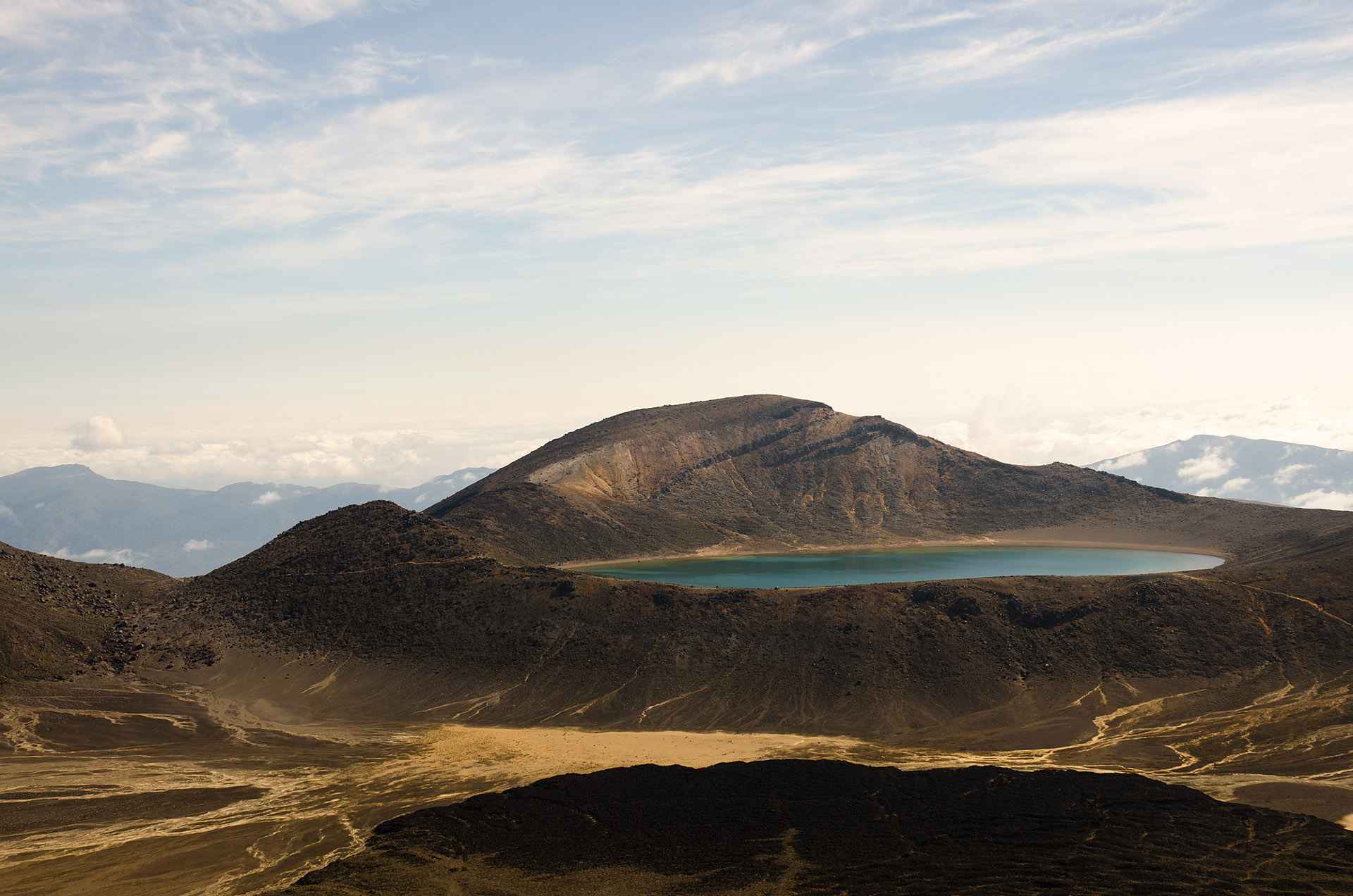 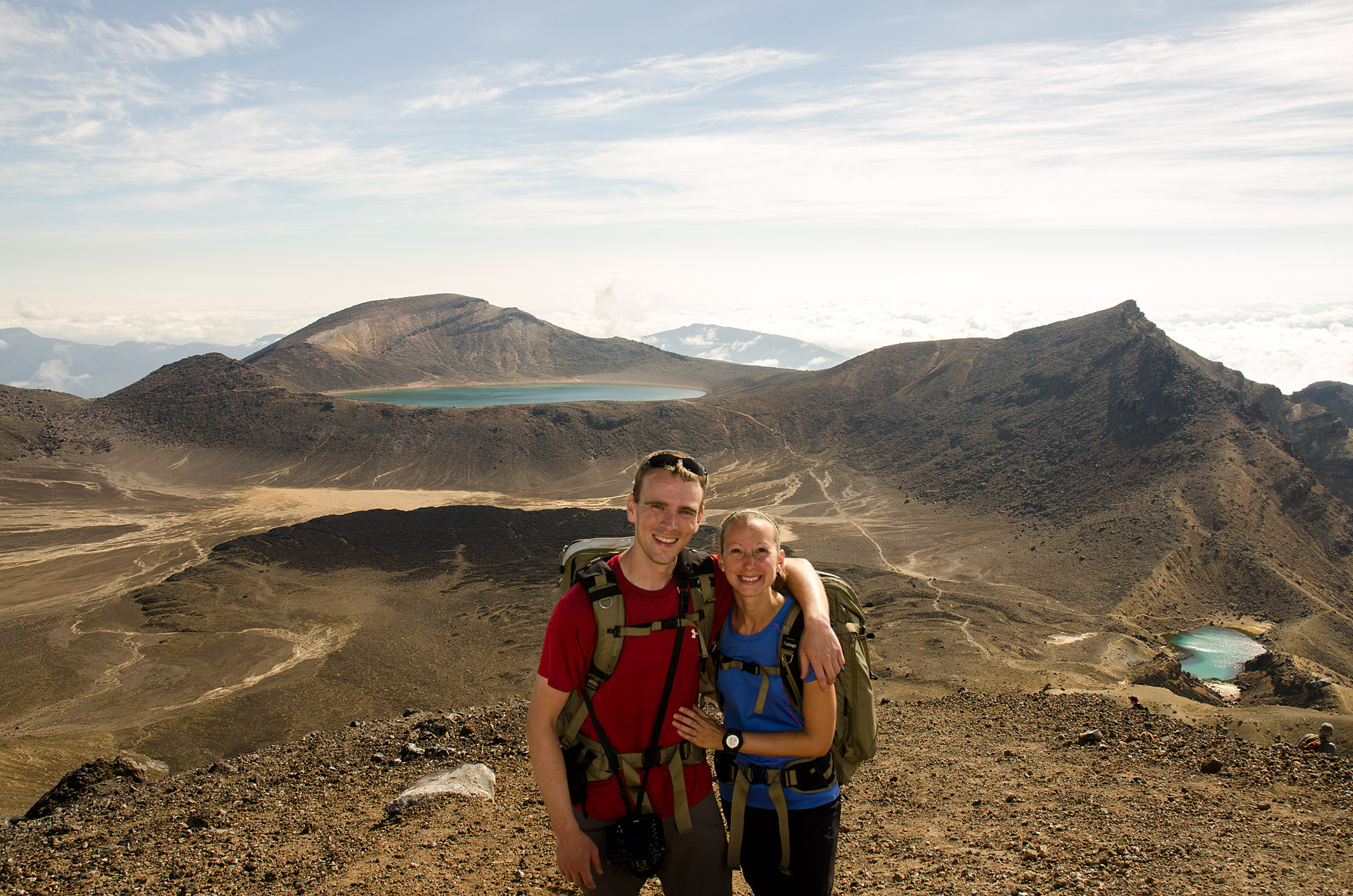 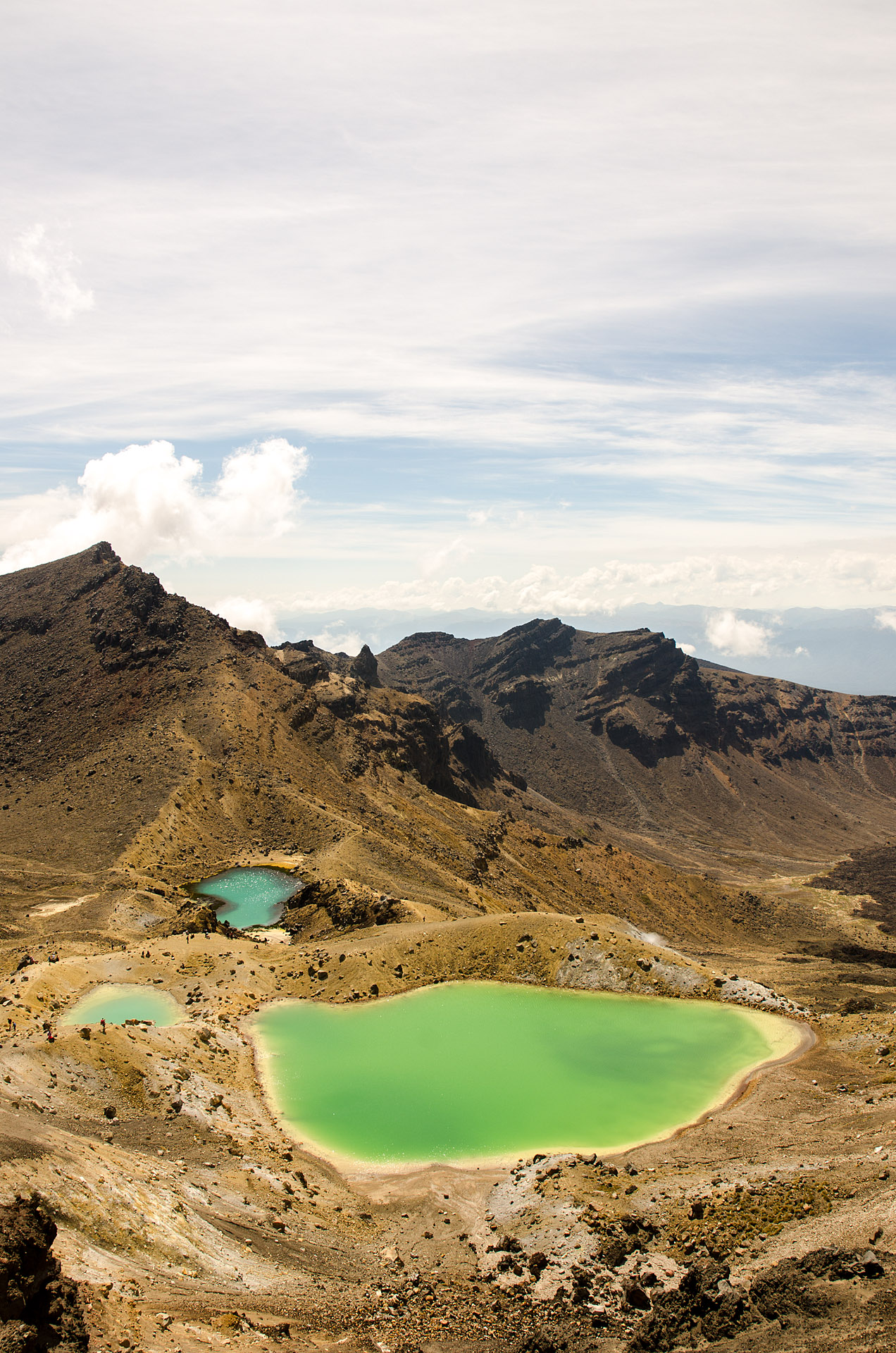 As we began the descent to the lakes, the trail quickly deteriorated to a steep, sandy scree, and I realized it was now or never to go back to that alluring ‘Tongariro Summit’ sign we passed earlier. The sky was still nearly cloudless, and I hoped that if we just kept a good pace to shave some time off the summit side-trip, we’d still have some bright sunshine for a lakeside lunch. Having finally reached a resolution, we turned around and headed back to the signpost. We quickly realized that the trip to Tongariro’s summit was an excellent choice. The trail wrapped along the expansive South Crater, providing a beautiful panoramic view of the previous part of the track. Atop Tongariro, the rugged, snow-capped peak of Mount Ruapehu suddenly peeked out from behind towering Mount Ngauruhoe, and in the distant northwest, we could see all the way to Lake Taupo. 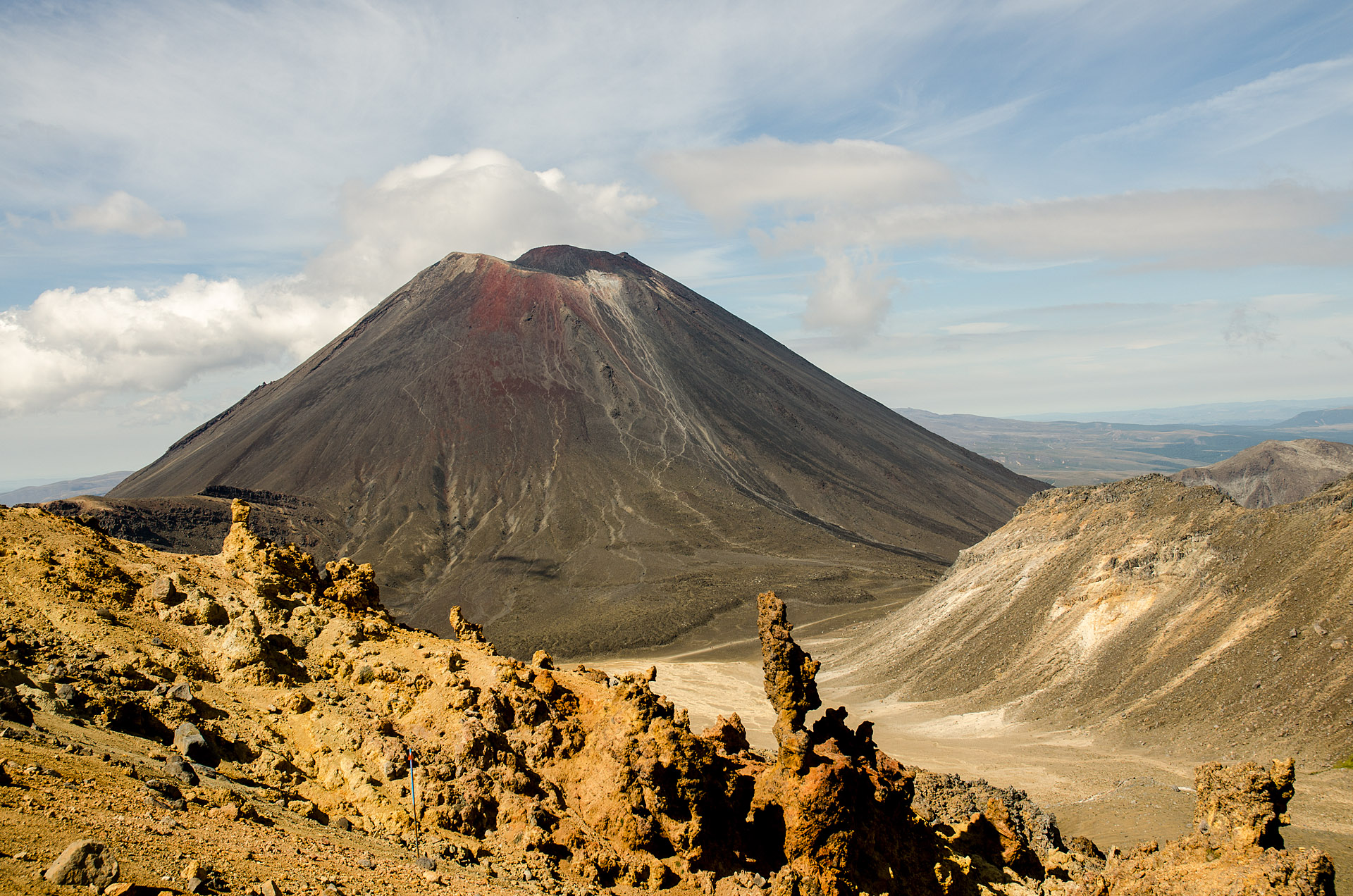 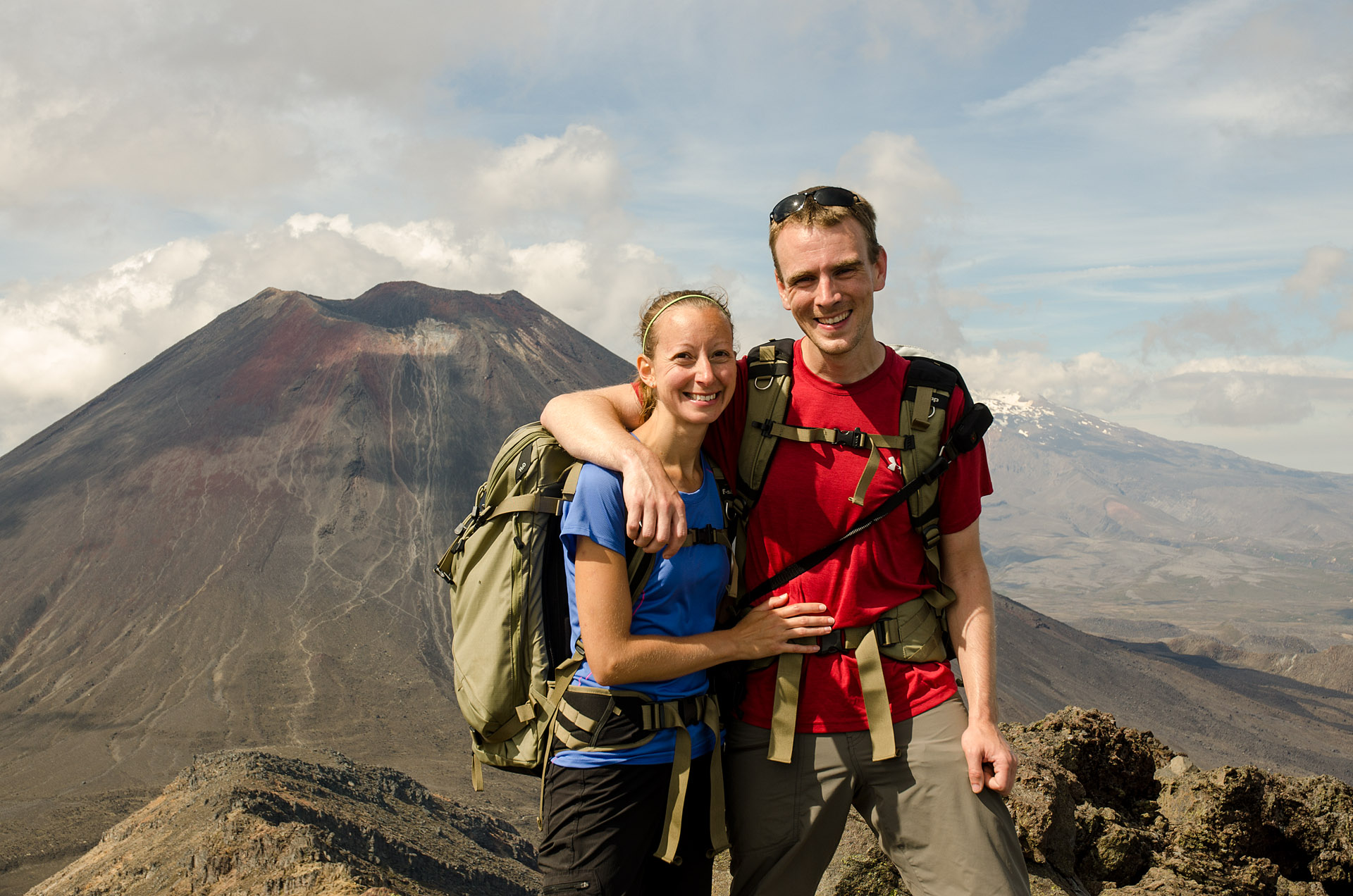 Anxious to beat a handful of potentially-incoming-yet-still-distant clouds to the lakes, we quickly descended Tongariro’s summit, returned to the original trail, and retraced our steps back up to and around the Red Crater. Then, there they were, in all their glory – the pristine Emerald Lakes, still bathed in full sunlight! While the other hikers inched tentatively down the steep scree-covered slope, we romped like little kids through the deep sand, overjoyed to take a closer look at the exquisite pools. Each mineral-rich, acidic (pH 3-5) lake glistened its own unique shade of teal or vibrant green, but all were similarly transparent, flawless, and captivating. We ambled around each of the pools, gazing in awe at the astonishing hues, and finally ate our lunch beside the last of the three lakes. I think we must have sat there just staring at the water for a good 40 minutes before finally forcing ourselves away. 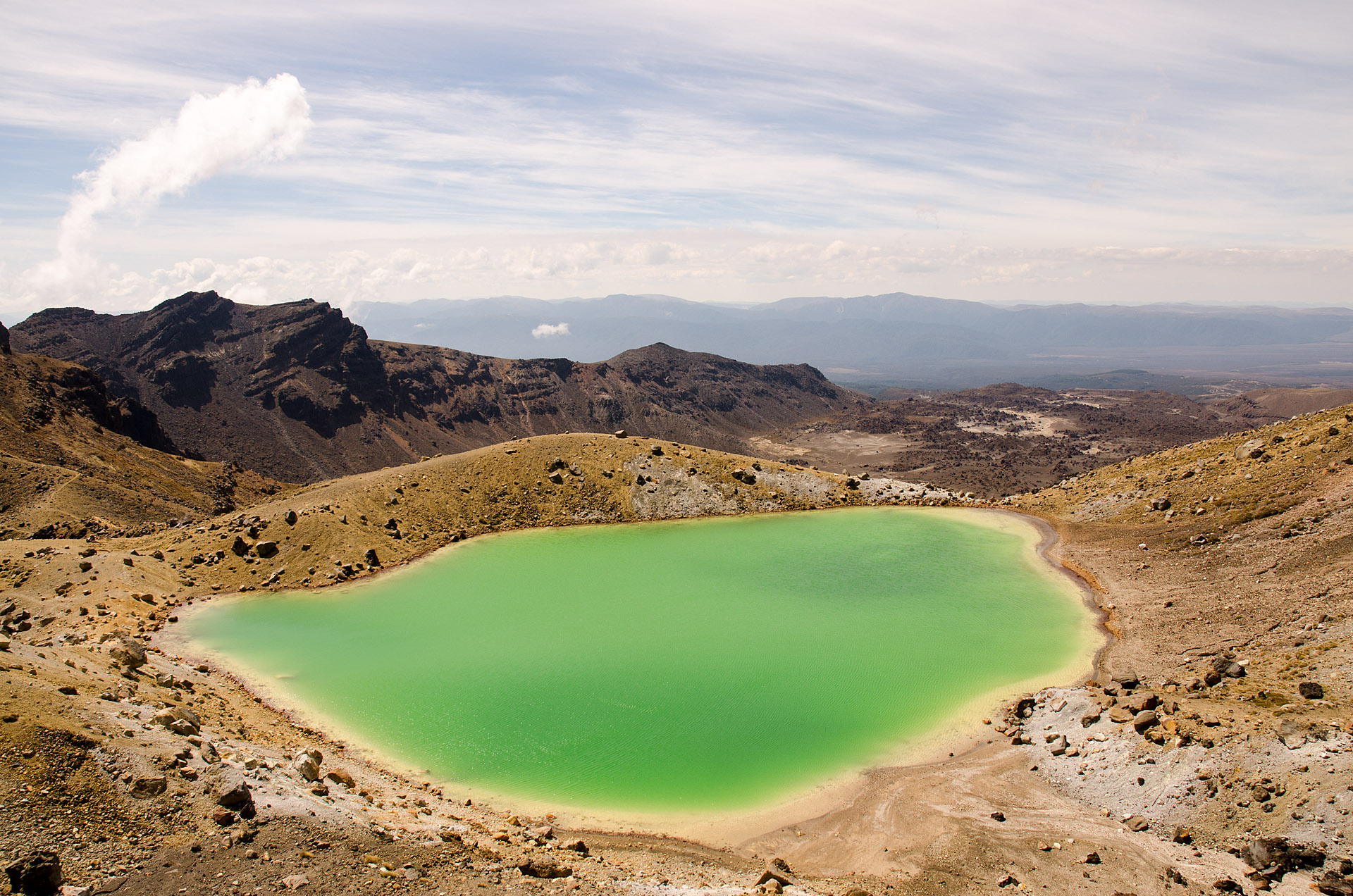 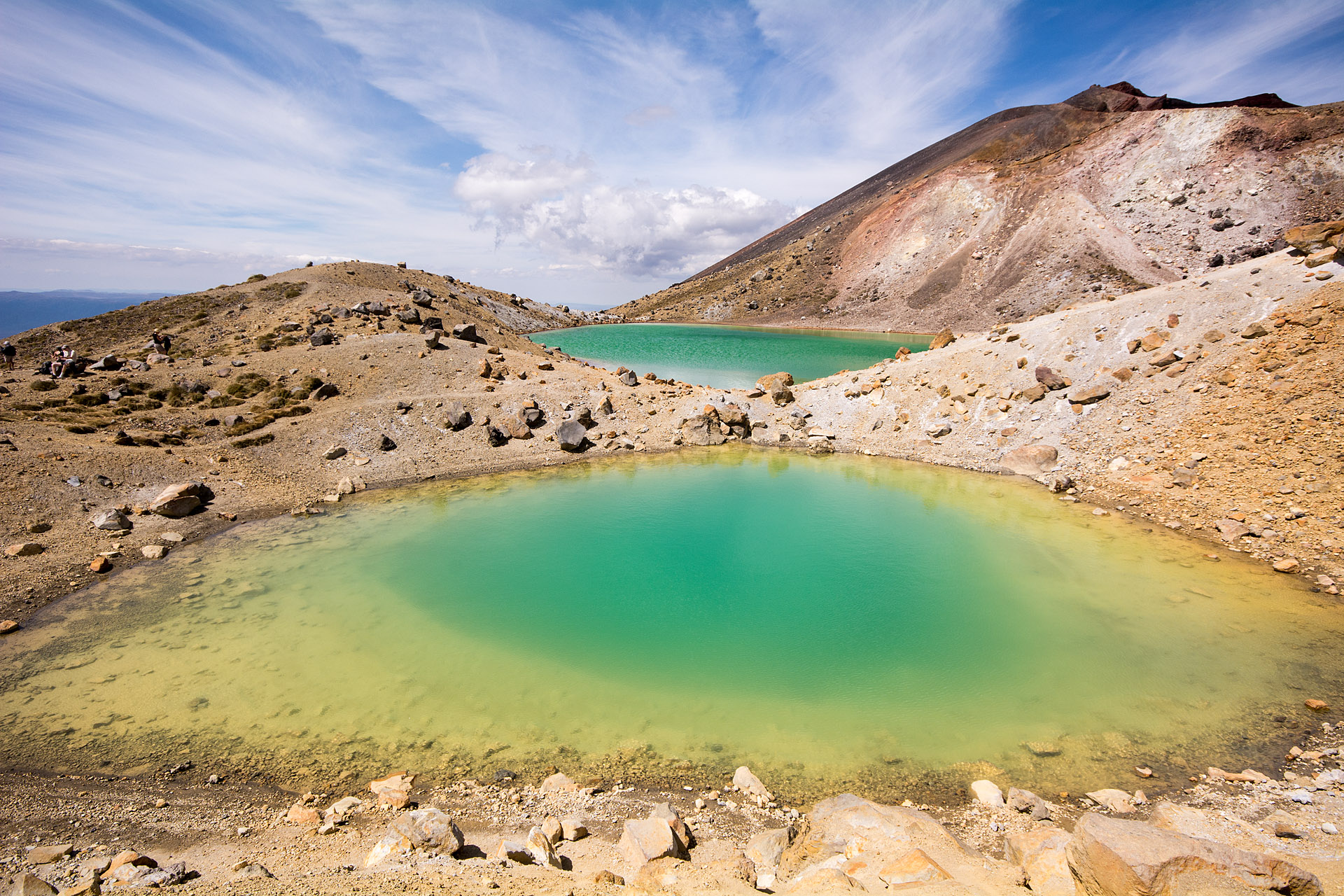 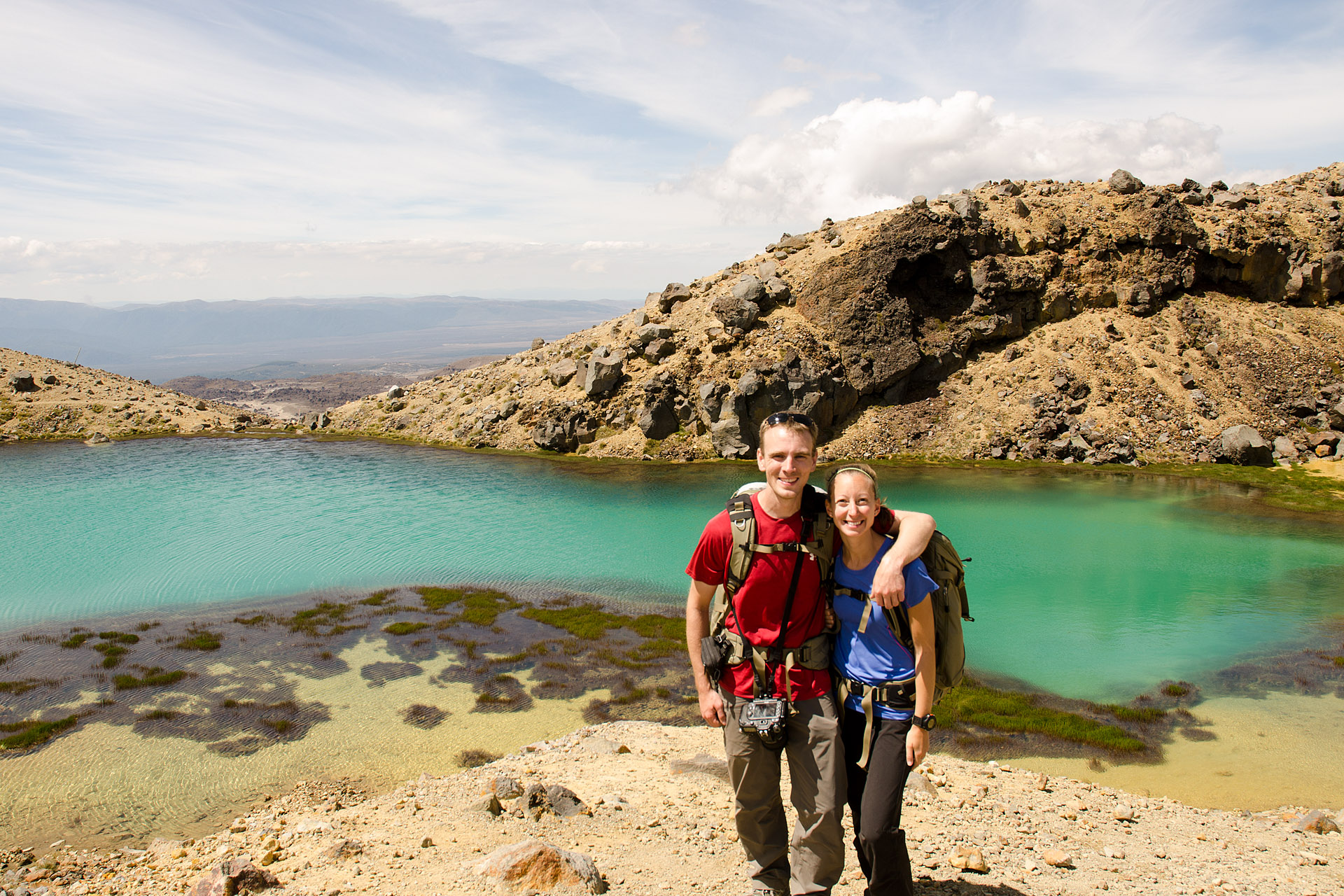 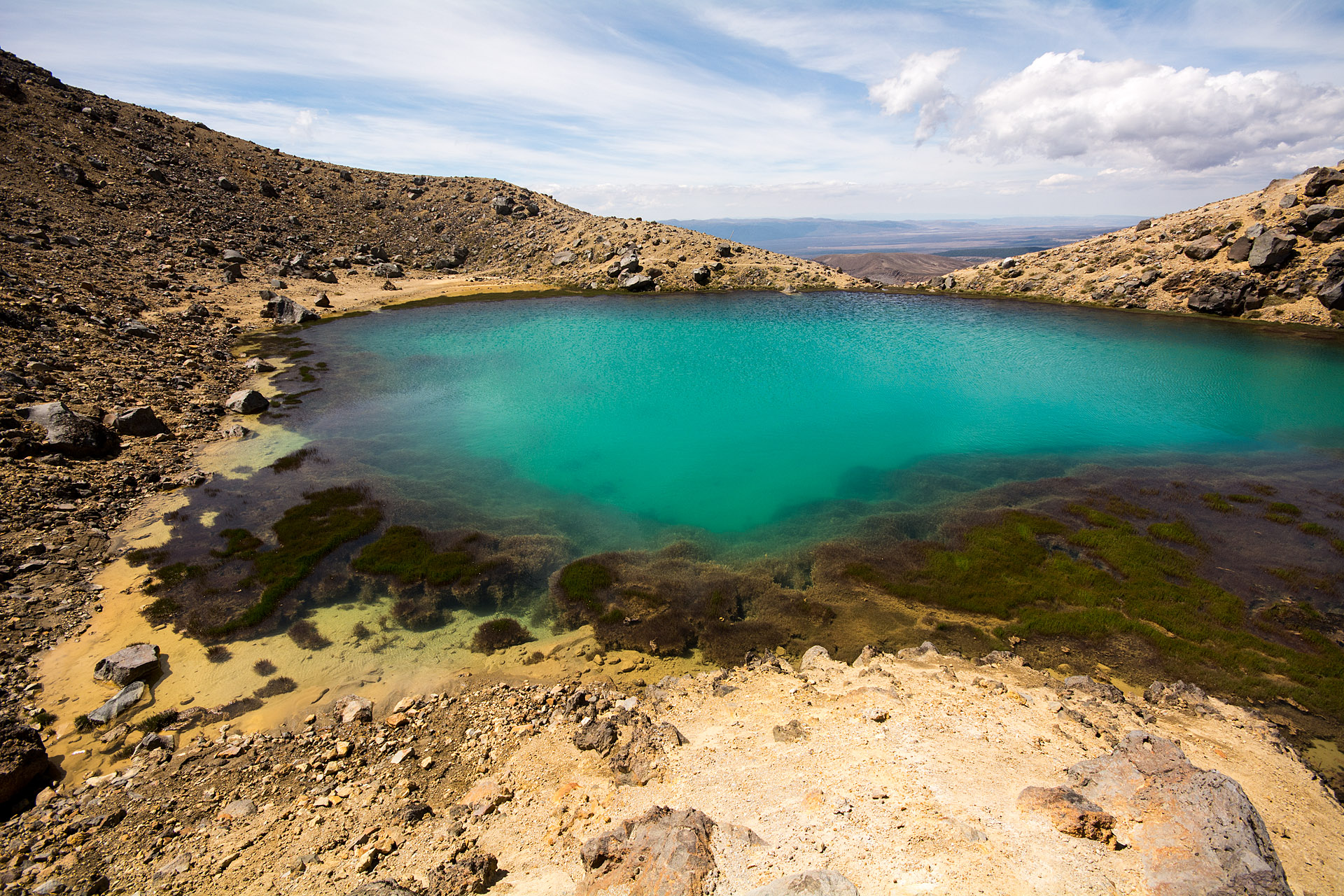 Eventually bidding farewell to the Emerald Lakes, we resumed the last third of our route. As we descended into the next valley, we turned back for one final vista of the majestic volcanic chain. From this vantage point, the green and red hues of the broad Red Crater exploded in the warm sunlight, against the formidable backdrop of Mount Ngauruhoe’s soaring crest. 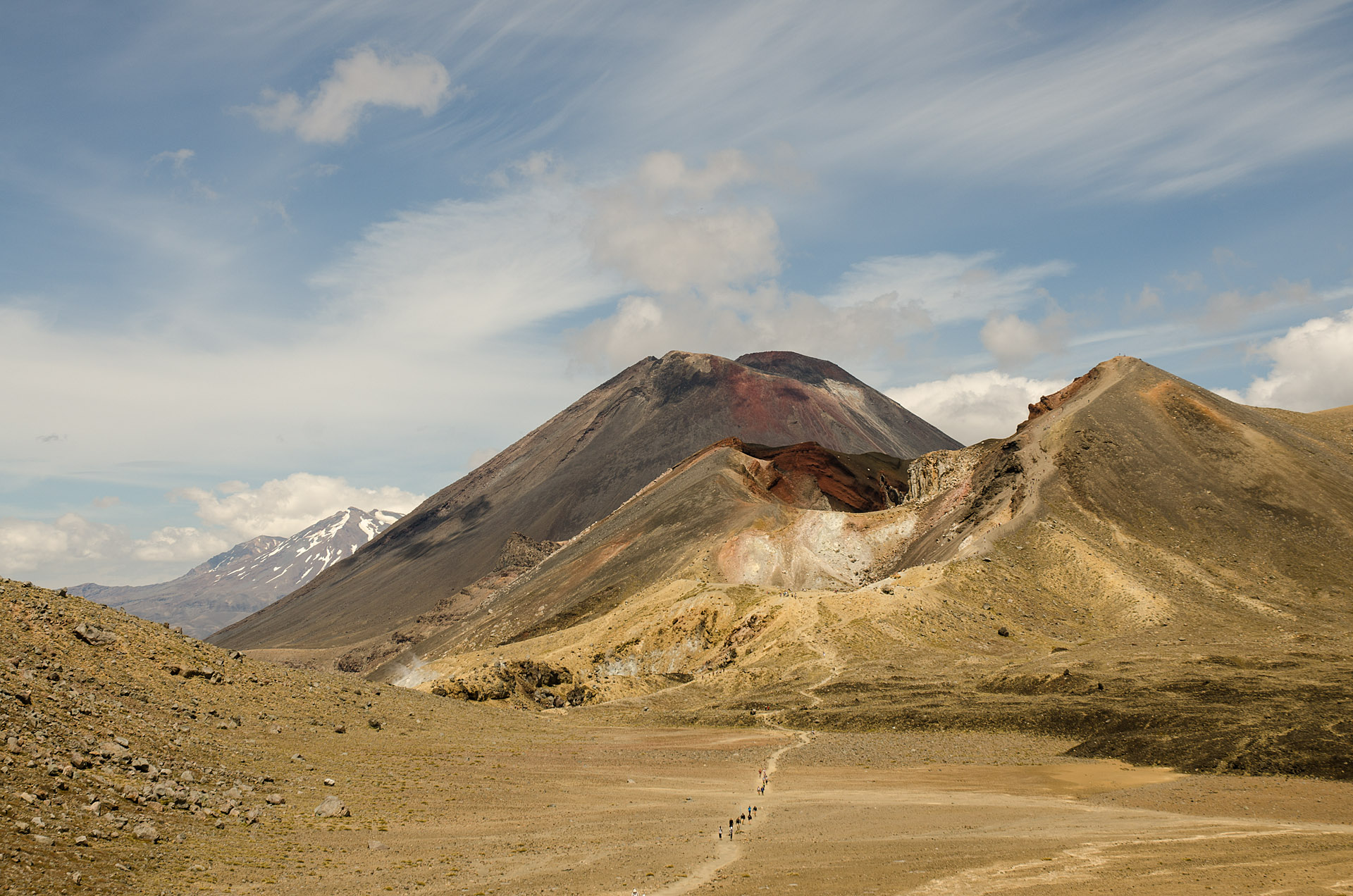 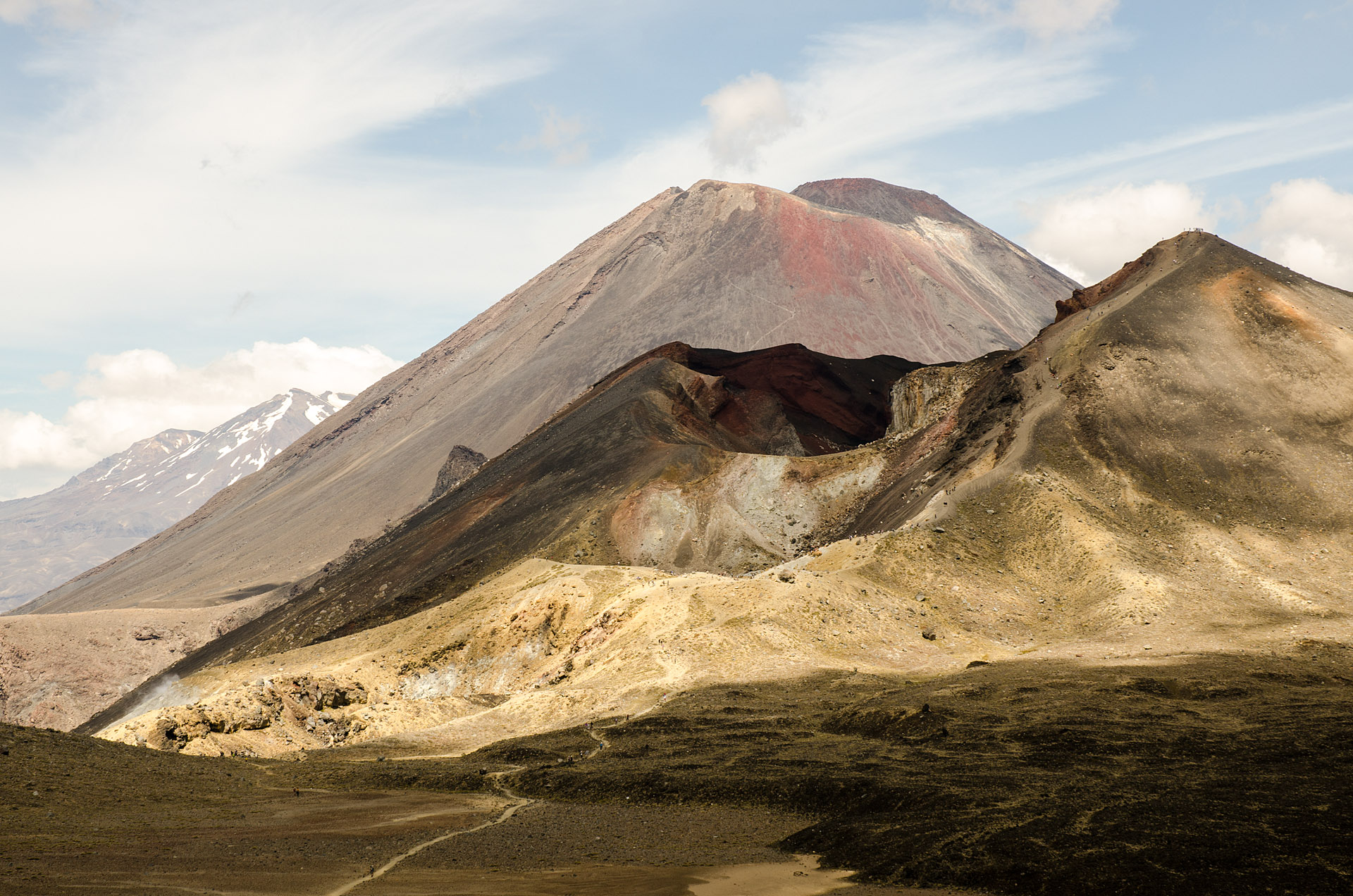 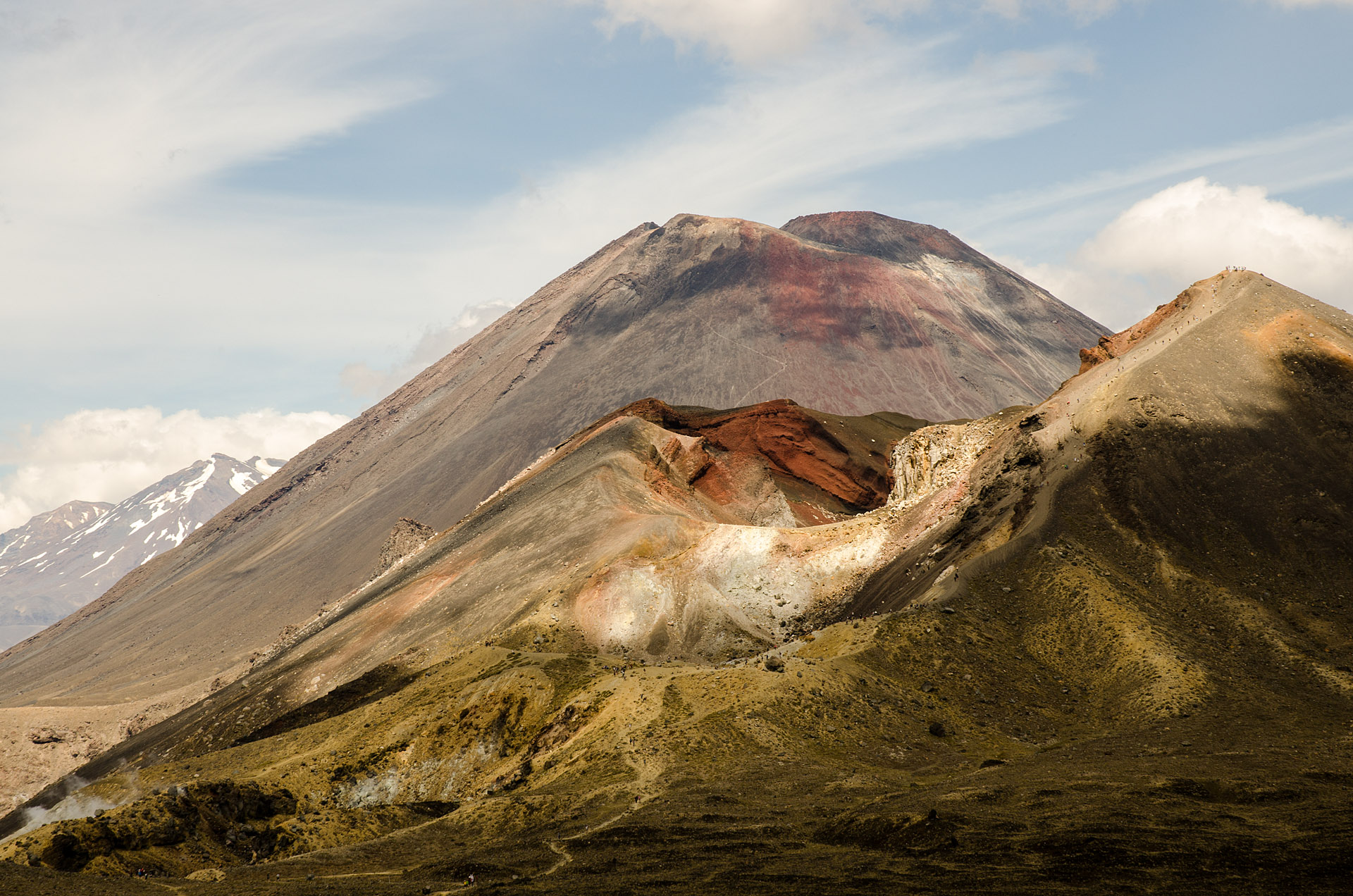 Just up the next ridge, we passed the vast Blue Lake, another sacred site of the Maori. Beyond Blue Lake, the trail twisted and turned down Tongariro’s flanks in a series of hairpins, offering sweeping views of Lake Rotoaira and the forested valley below. As we tramped along the scrubby alpine flora, we were met with a sudden and intense smell of sulfur. Just off the rocky slopes to the east, a cluster of fumaroles spurted billows of noxious gas high into the air (New Zealand’s geological institute (GNS) has recorded gas temperatures here up to 716°F). These vents, the Te Maari Craters, recently became active in 2012, following an eruption of Mount Tongariro. Prior to that volcanic event, the craters had stood in silence for more than 100 years (since an 1896 eruption). Not far down the trail, we spotted a few seemingly out of place, large, yellow rocks – sulfur-rich boulders that had been flung from the Te Maari Craters during the most recent eruption. 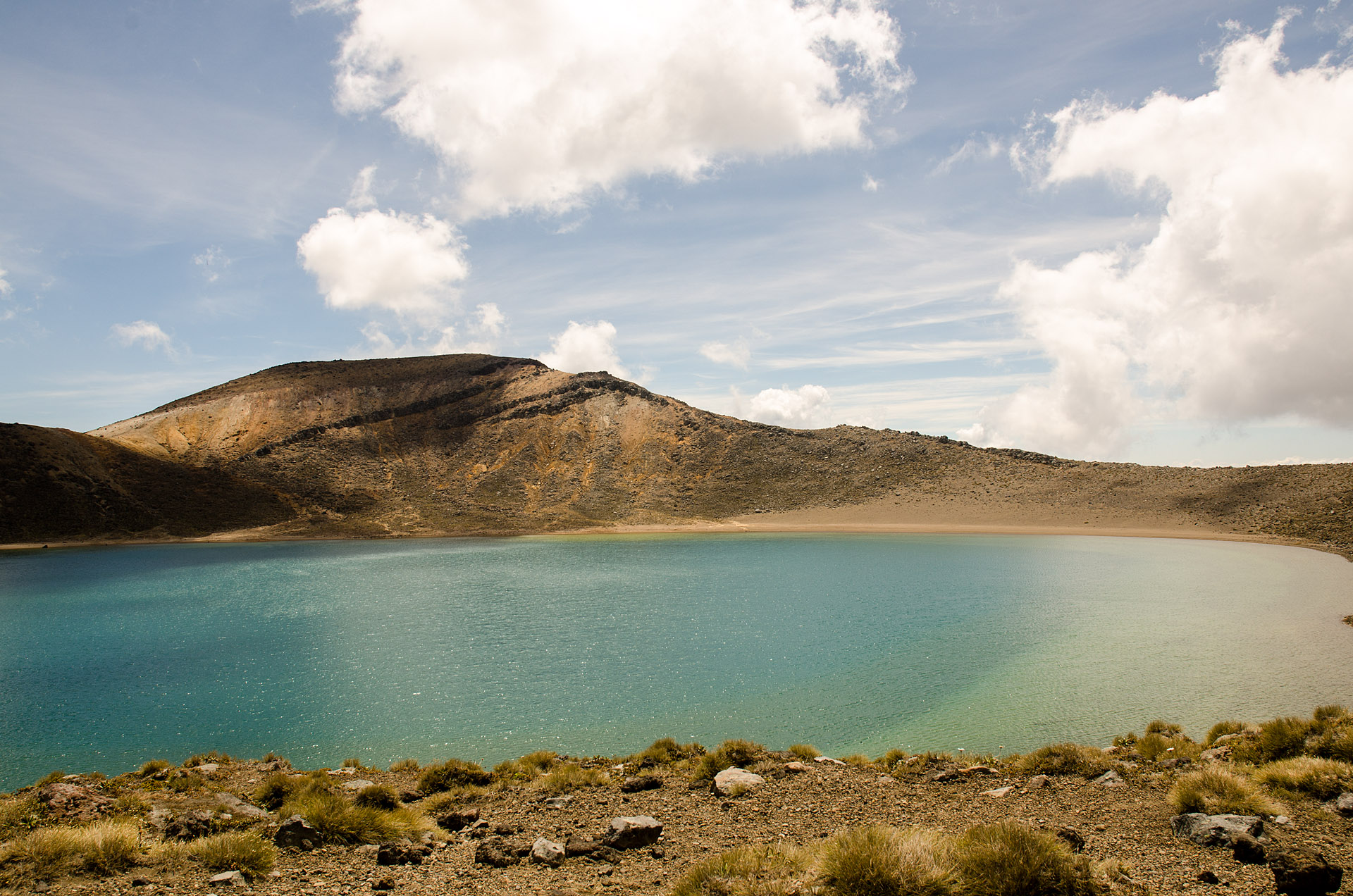 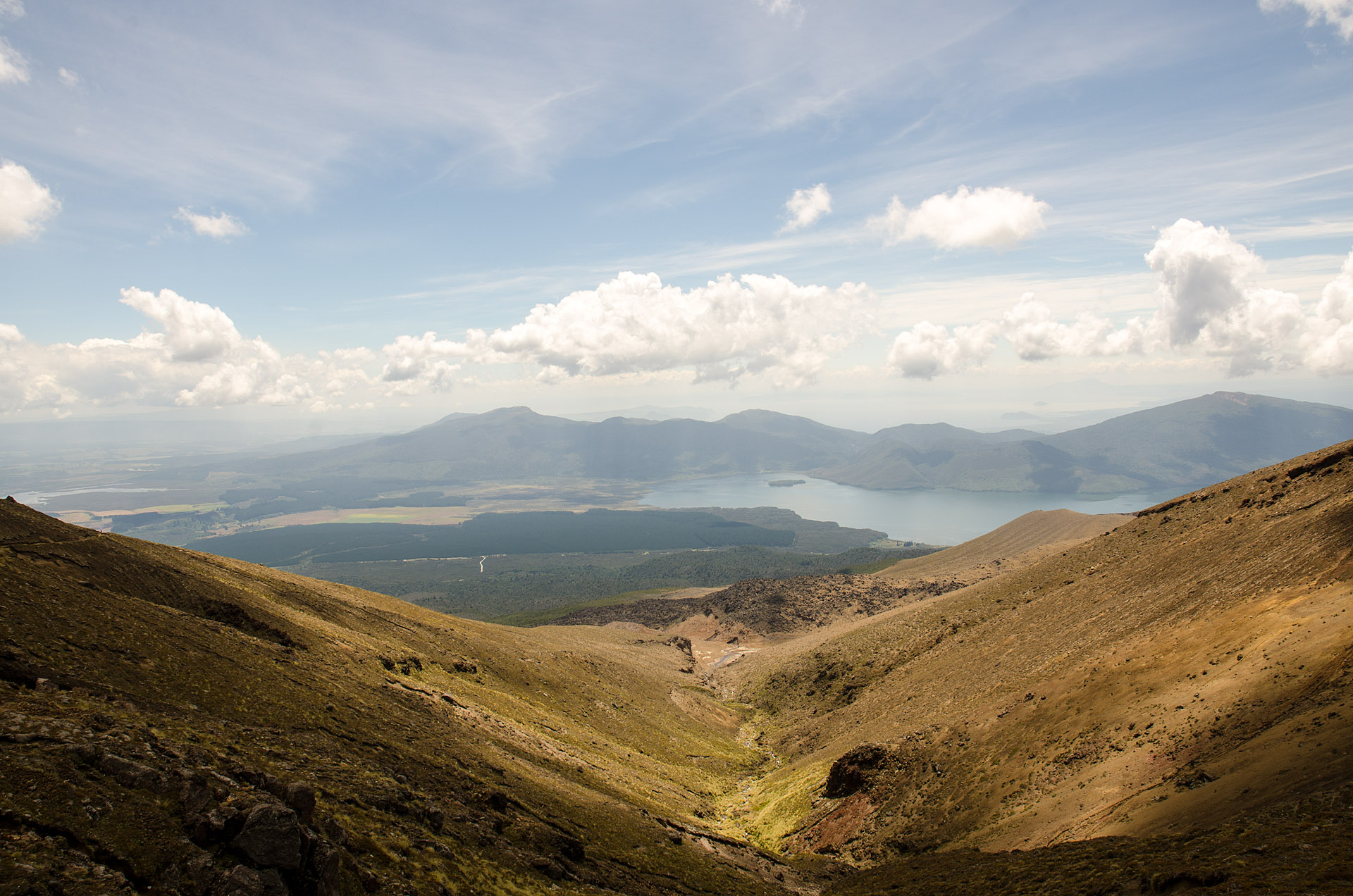 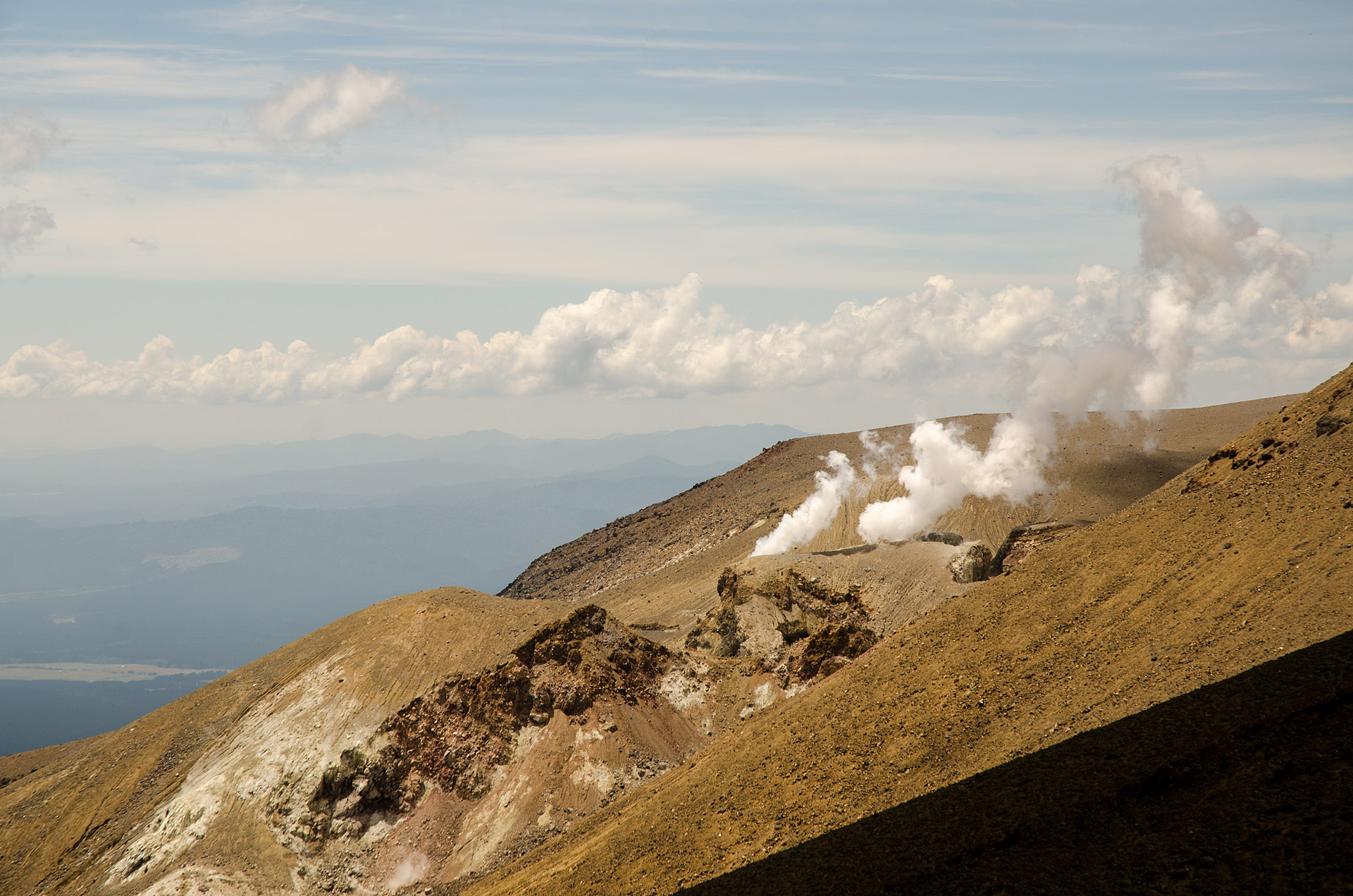 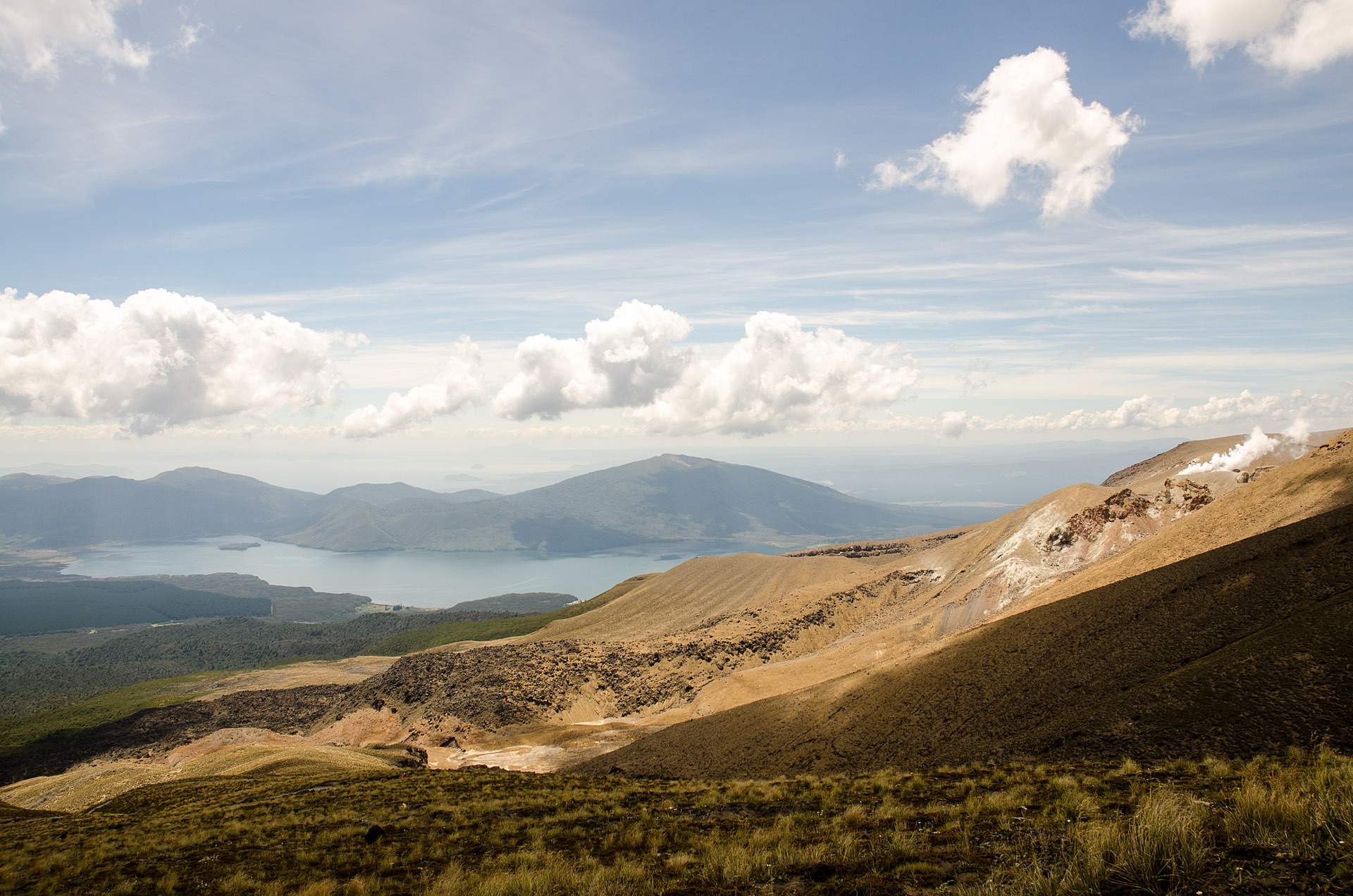 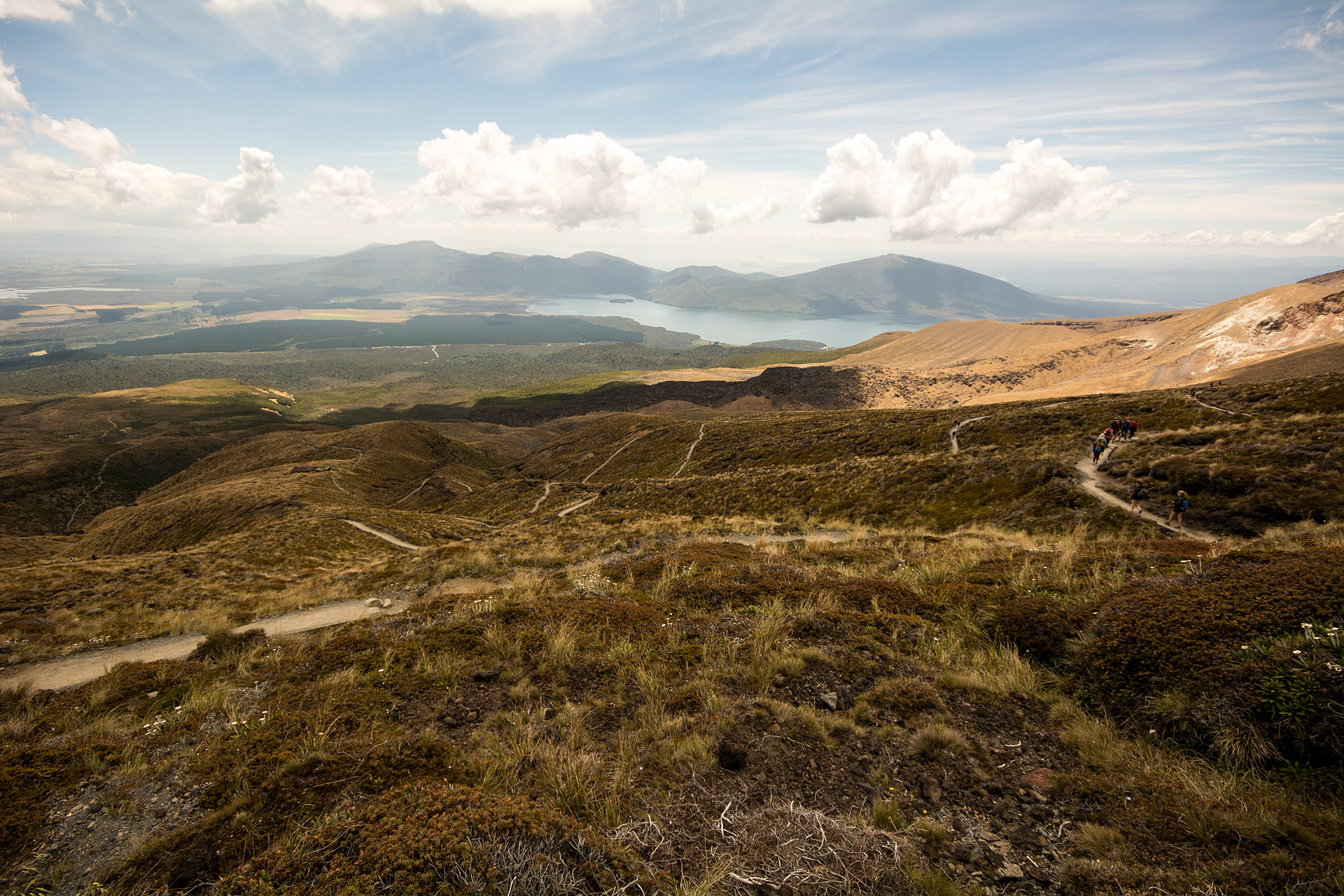 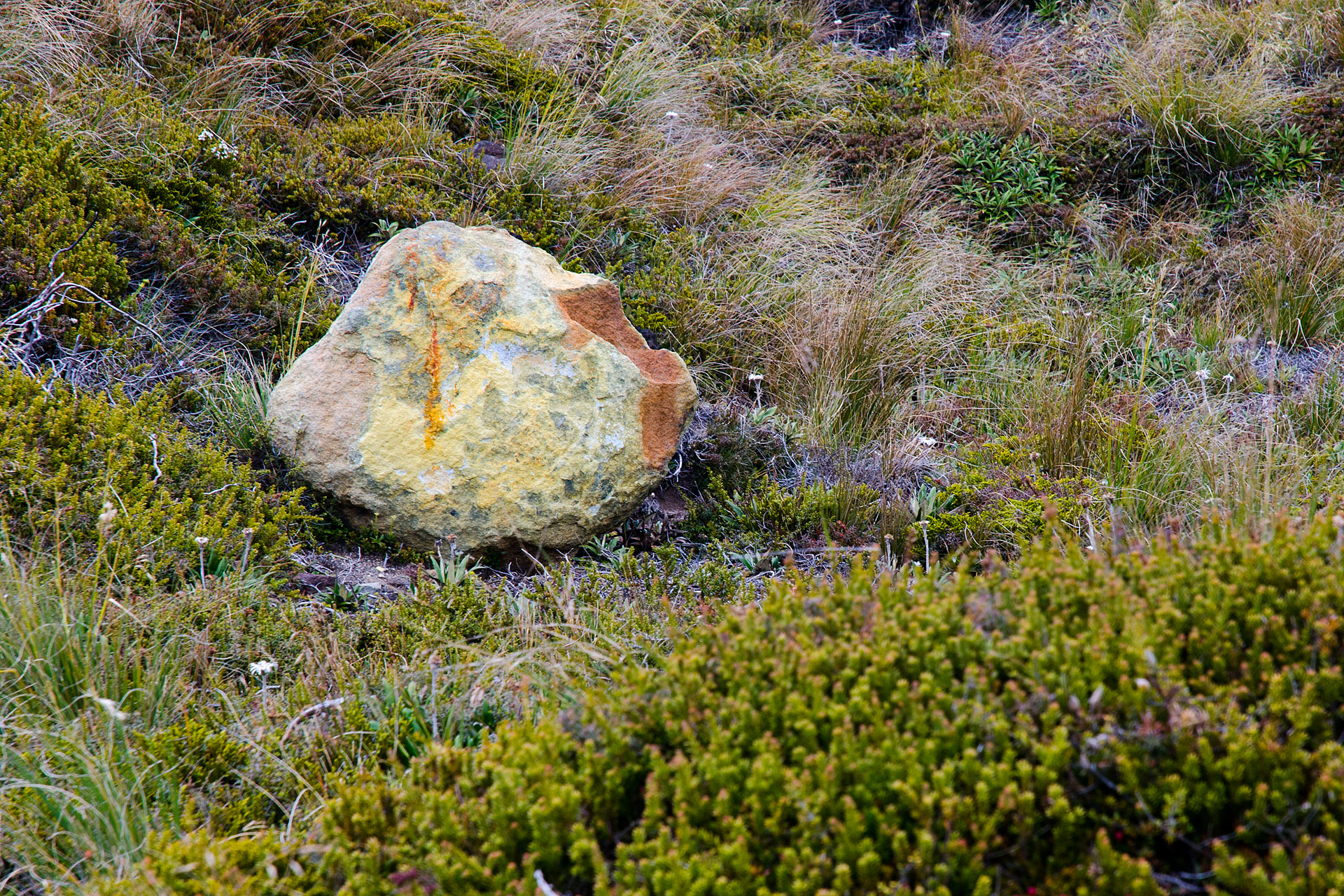 The trail eventually exited the alpine scrub, ending in a lush forest along the base of Tongariro. As we hopped on our return shuttle to Whakapapa, and our names were carefully crossed off the day’s log sheet, I think we were both kind of in awe over the hike. Quite honestly, I had built up the crossing so much in my head prior to the trip, I wasn’t sure my expectations of the hike would be met. What I never imagined is that these expectations would be so far surpassed and, really, that anywhere on Earth could be as mesmerizing as Tongariro National Park. 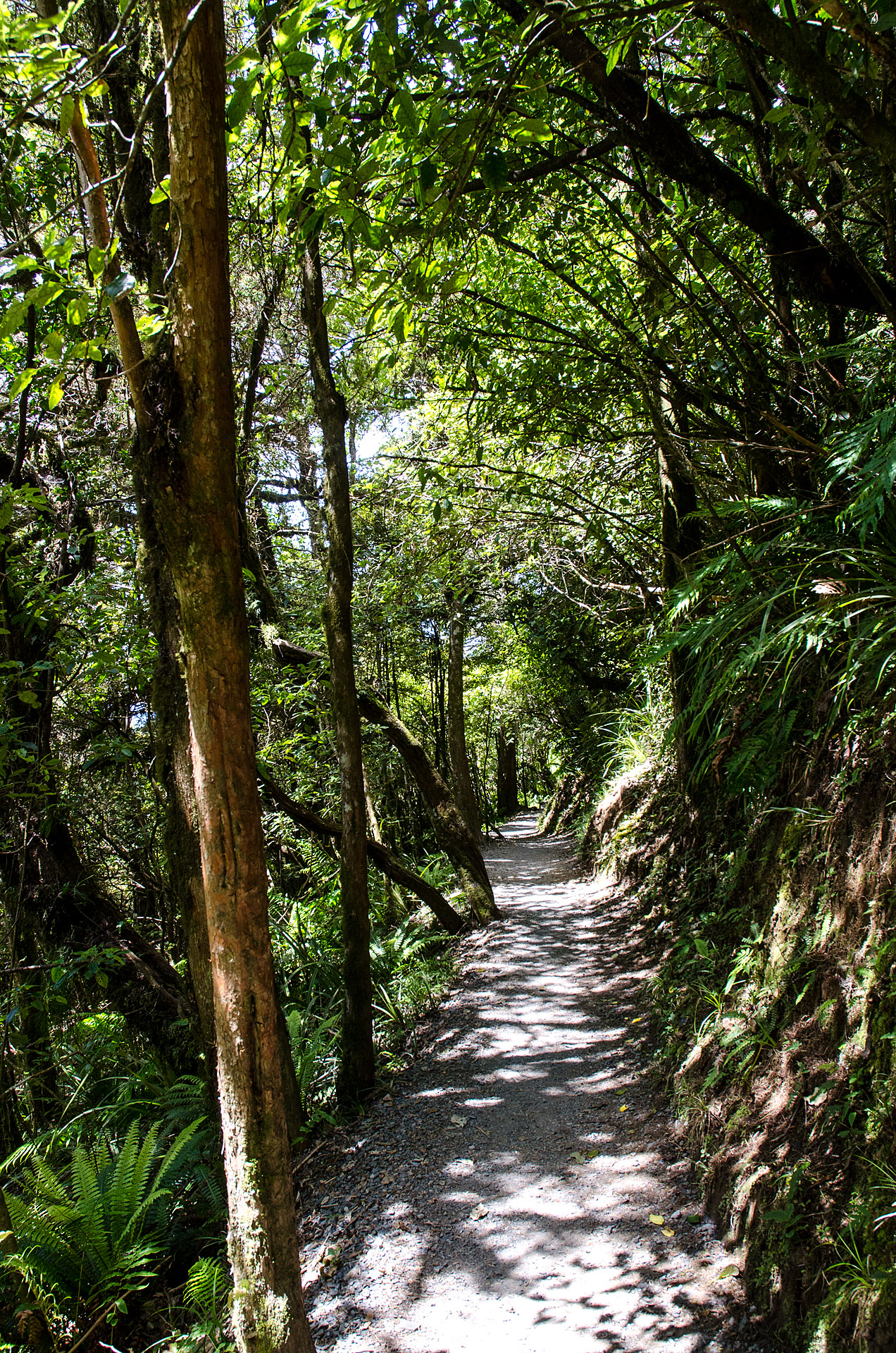 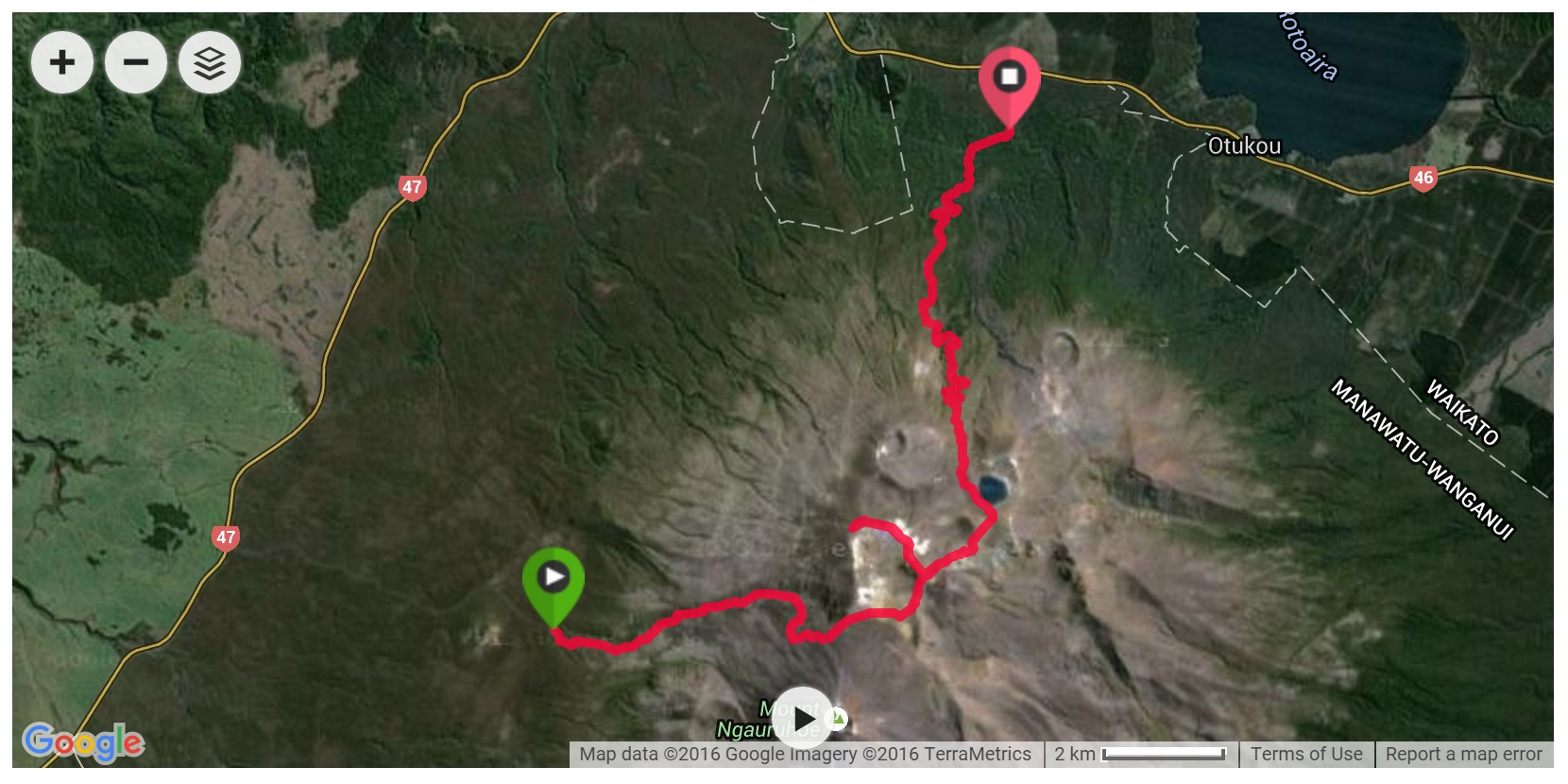