If you’d like to avoid Cadillac Mountain’s crowded summit but still enjoy a classic Acadia view of the islets peppering the sapphire waters of Mount Desert Narrows, look no further than Champlain Mountain. Standing at 1,058 feet – compared to Cadillac’s 1,529 foot summit – Champlain is Cadillac’s slightly shorter sister. Sitting just east of Cadillac, the two peaks are separated only by a narrow valley cut by Otter Creek Road. Importantly, because Champlain is the easternmost (and second-highest) peak on the island, the ocean views are just as beautiful as those atop Cadillac (and can be enjoyed with much more tranquility).

Champlain’s South Ridge Trail is accessed via The Bowl Trailhead, across the street from a large parking lot for Sand Beach that’s right along Park Loop Road. When we initially saw the number of cars in the lot, we feared the trail would be a crowded nightmare. Fortunately, however, we saw only a handful of people on the hike. Thus, we assumed most of the cars belonged to sun-seeking beachgoers (or those walking the Ocean Path Trail).

South Ridge trail begins with a gentle climb through the forest before quickly opening to a small, granite-strewn clearing. A signed path to the right leads to the Beehive, an exposed trail that navigates sections with steep steps and iron rungs. If you are not up for the steep scramble (dogs also are not allowed on this trail), continue on the path to the left for The Bowl. After a short distance, you’ll arrive at The Bowl, a small, freshwater lake with Champlain’s summit soaring overhead. The trail continues around the lake’s perimeter before rising above most of the evergreens and onto the granite hillside. A look back affords a lovely view of The Bowl, with the Atlantic Ocean outstretched in the distance. 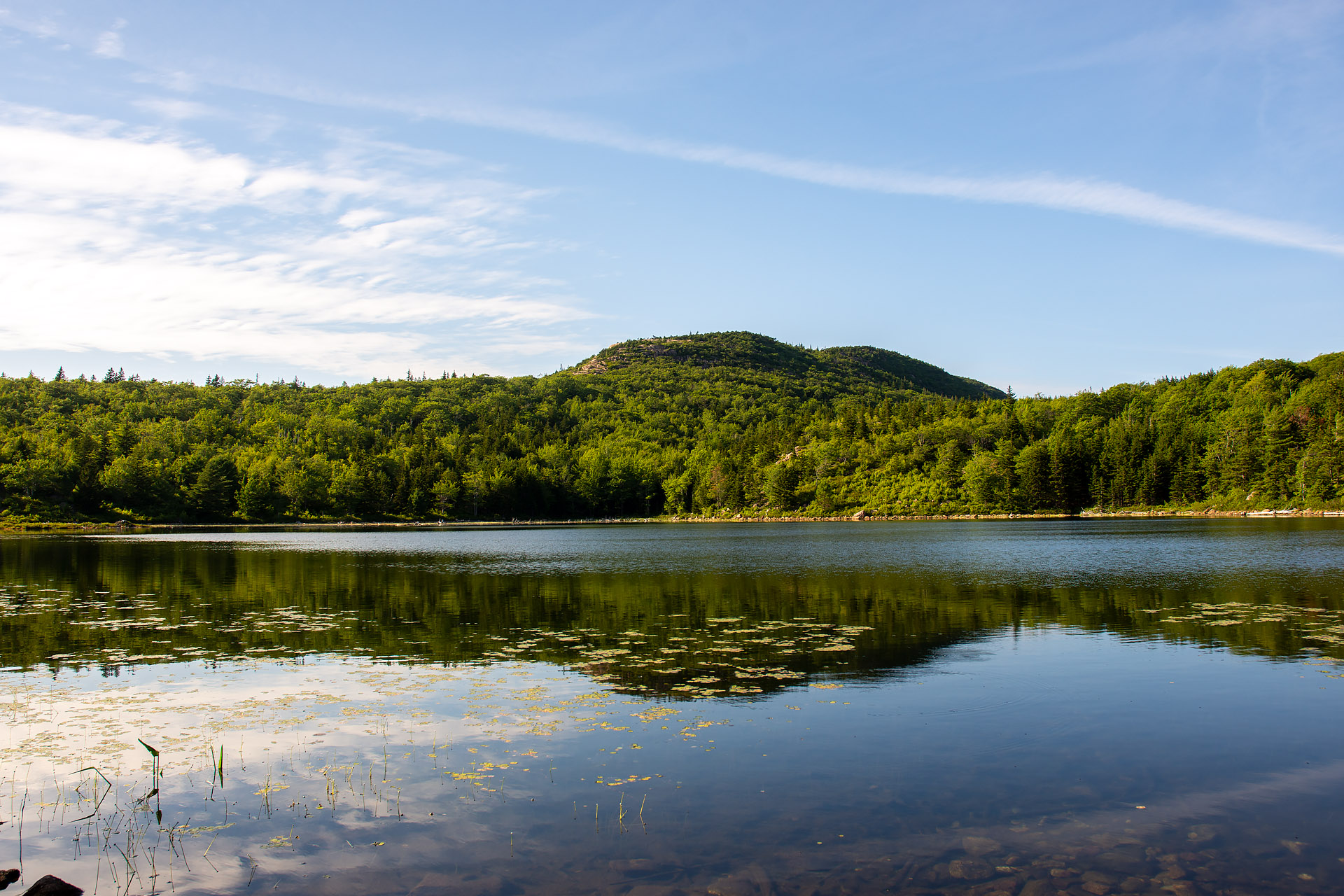 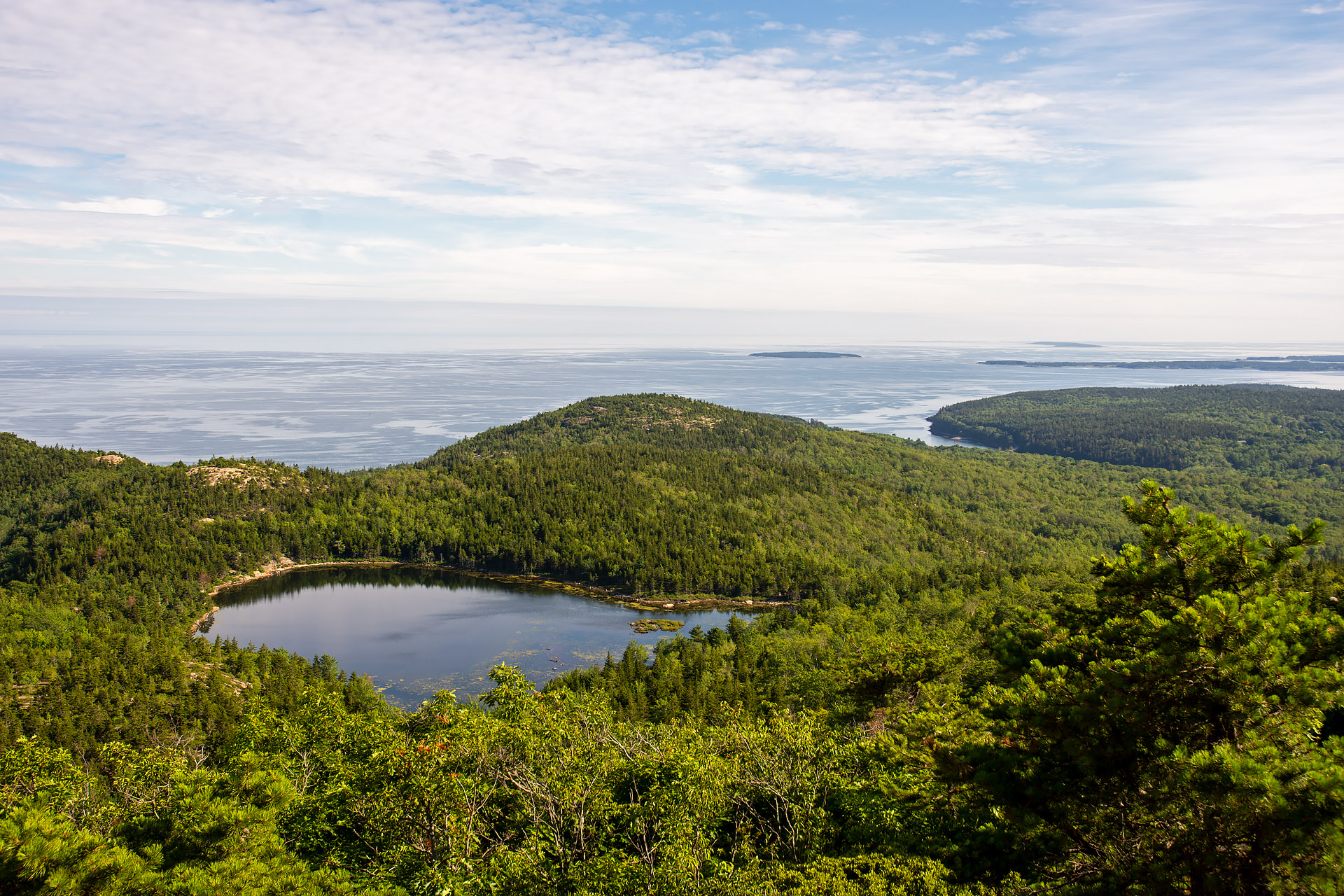 As we made our way up the granite slopes between The Bowl and the summit, we noticed the wild blueberries had begun to ripen. We plucked a couple berries from a bush, and handed them to Sanchez. Exceedingly delighted with the sweet fruit, she quickly began foraging for her own berries. As the bushes became more numerous, her excitement similarly amplified. Before we knew it, we were having to drag her out of the undergrowth as she wildly chomped at every fully-ripened blueberry she laid eyes (or nose) on.

When we finally reached the summit, we met a lovely couple from New Jersey who took to Sanchez immediately. After Sanchez gave them a warm hello, the girl unexpectedly pulled a plastic spoon and jar of almond butter out of her bag, and offered Sanchez a generous treat. Sanchez licked the spoon clean and stared with beseeching eyes toward her new friend. Immediately, the girl pulled out a second utensil and offered her another scoop.

While Sanchez happily snacked on her nut butter, we took in the summit views – classic Acadia with small, forested islets dotting the sapphire waters of the Atlantic. 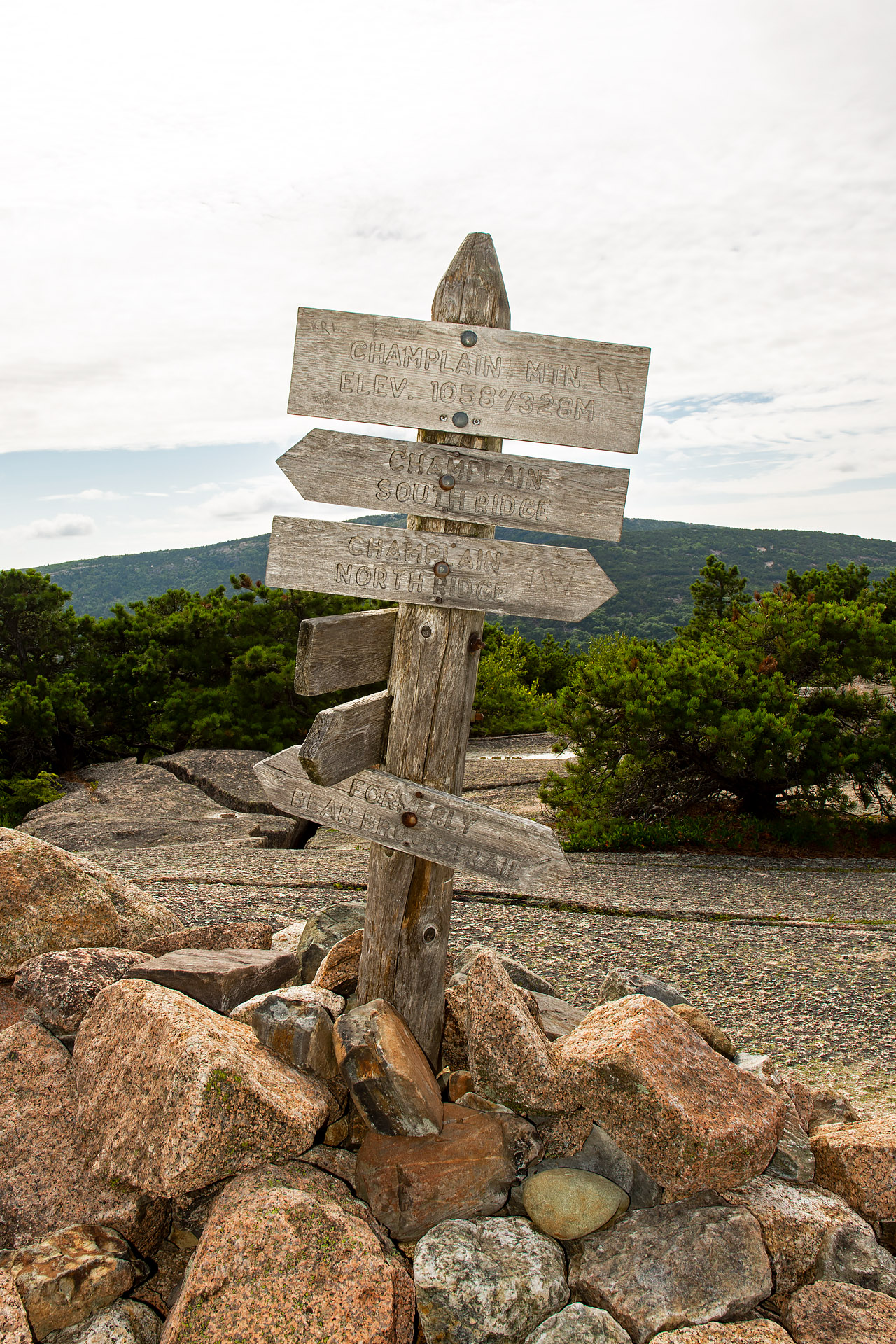 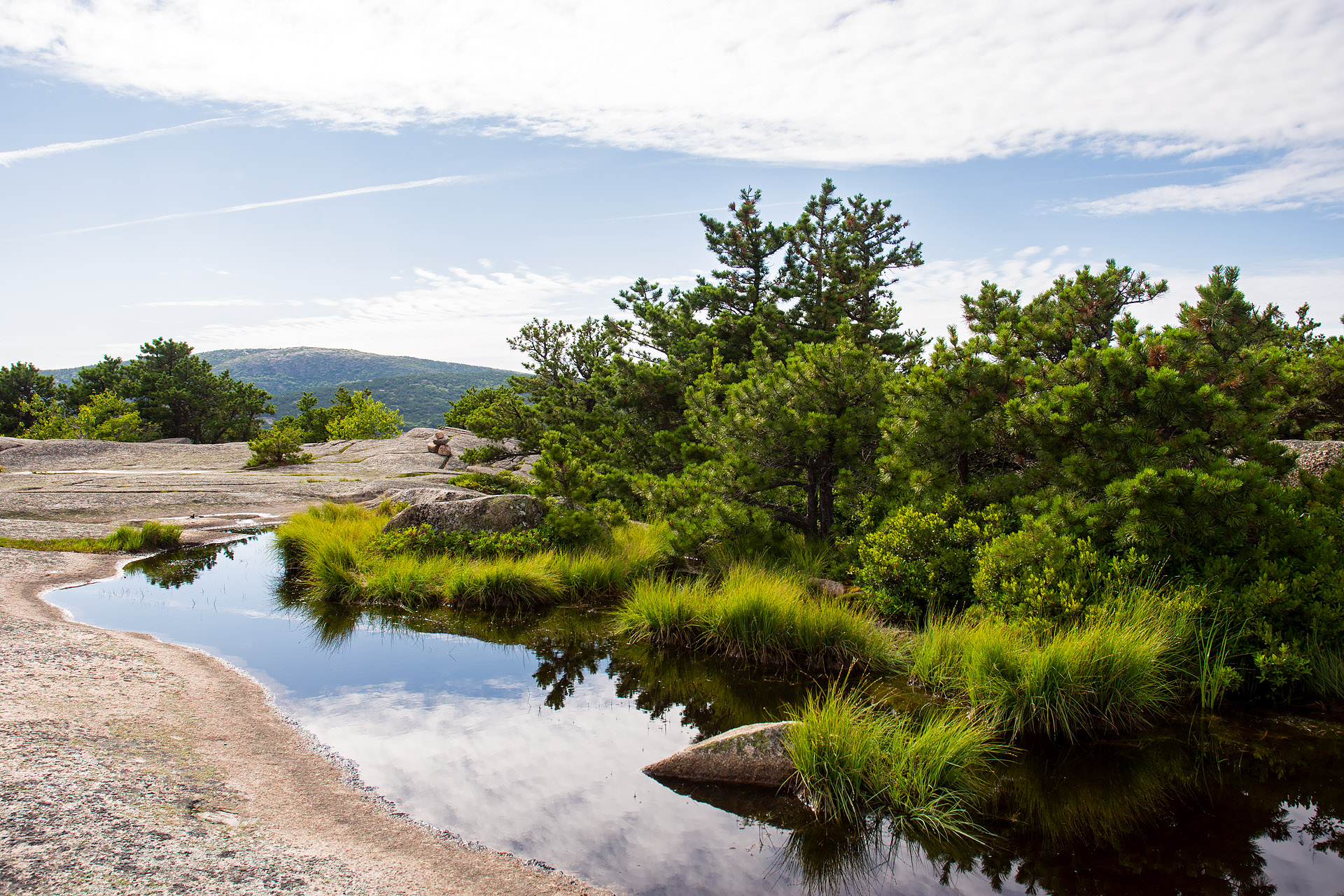 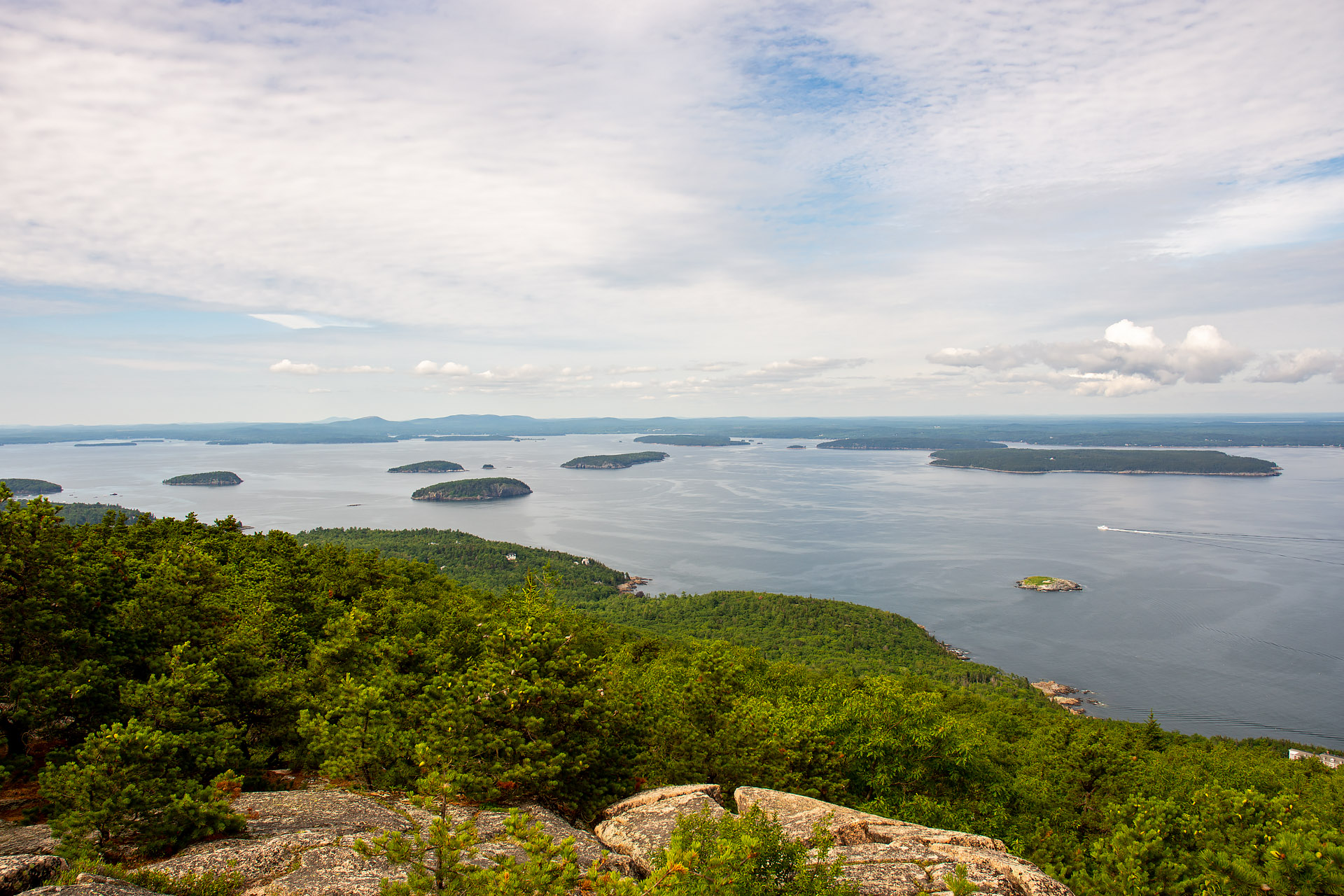 On our descent, we decided to take a quick side trip to Gorham Mountain, just to get a little extra distance and time on the trails. We were surprised to find that the trail to Gorham’s ‘summit’ was just under a mile, and that the summit was a short mound of granite ensconced in the surrounding evergreens. Nonetheless, we enjoyed the peek-a-boo views looking up to Champlain and the surrounding hillsides, and Sanchez is always eager to blaze a new path through the woods. 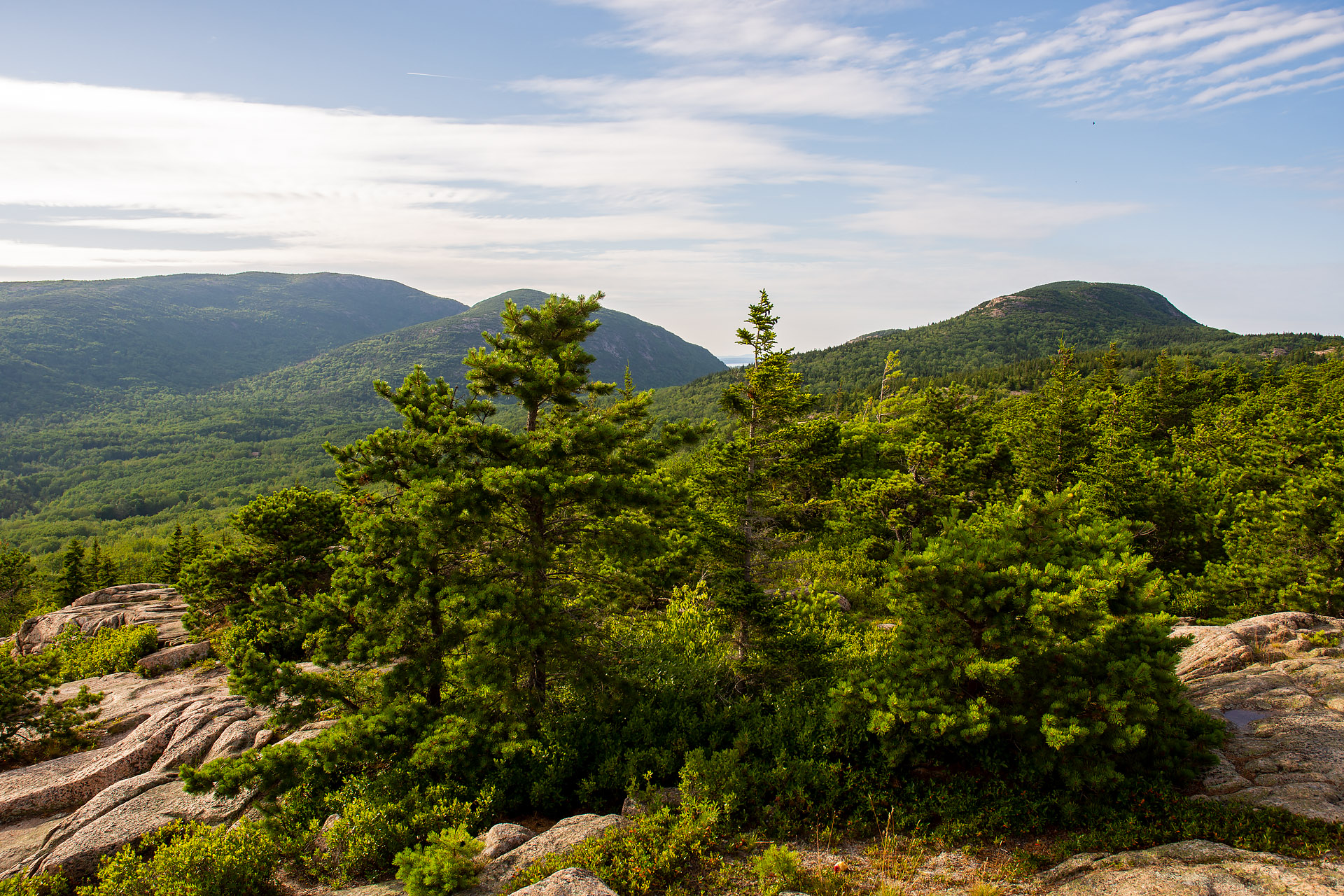 Notes: Champlain’s South Ridge Trail is ~4.5 miles round-trip. The side trail (out-and-back) to Gorham Mountain’s summit (at only 525’ compared to Champlain’s 1,058’ summit) is about 1.5 miles round-trip. It should also be mentioned that dogs are not allowed to swim in most freshwater lakes/ponds around Acadia, as they are public water sources. 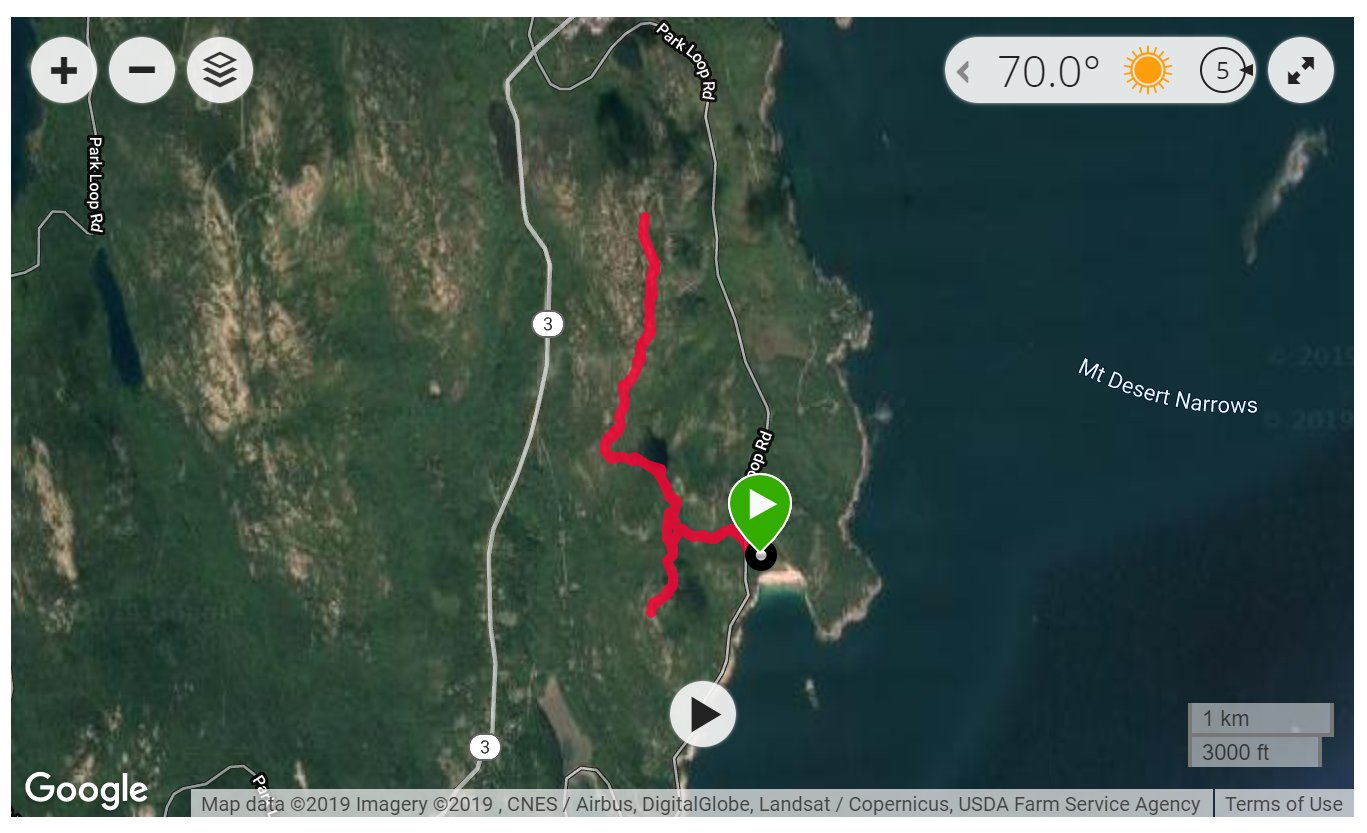