Because Roan Mountain is part of the much larger Appalachian Trail (AT), hikes here can be tailored to suit one’s needs. For example, from Carver’s Gap, you can hike up to Roan High Knob (the massif’s true high point) by heading south on the AT. To hike along the Roan Highland’s balds, head north on the AT from Carver’s Gap (trail is well-signposted). We lengthened our hike by following the trail from Carver’s Gap to Round Bald and Jane Bald, then continuing on the AT to the Overmountain Shelter. On our return trip, we took the side trail out to Grassy Ridge (the third bald) before returning to Carver’s Gap.

If you are interested in just hiking along Roan Mountain’s three balds (out-and-back from Carver’s Gap to Grassy Ridge), the distance is around 5 miles with about 1,200 feet of elevation gain.

Straddling the border of NC and TN, Roan Mountain is touted as one of the most scenic sections of the Appalachian Trail (AT) – which, at nearly 2,200 miles long, is considered the longest hiking-only trail in the world. Here, the AT traverses the Roan Highlands, a 20-mile massif that contains the longest tract of grassy balds in the Appalachians. With a series of barren summits above 6,000 feet, the trail offers unrivaled panoramas of Pisgah & Cherokee National Forests.

We reached the trailhead at Carver’s Gap around 8 a.m. At an elevation of 5,512 feet, the air was a crisp 50F and the wind whipped across the exposed highlands. As we ascended through a shadowy spruce-fir forest, the landscape was eerily silent and soft wisps of clouds drifted between tiers of sharp, splintered branches. Our time in the forest was brief; less than half a mile after entering, the trail abruptly unfurled atop Round Bald. Just as quickly, we descended the first bald to Engine Gap and reemerged atop Jane Bald. The clouds still clung resolutely to the hilltops, but intermittently we’d catch a fleeting glimpse of the surrounding countryside. 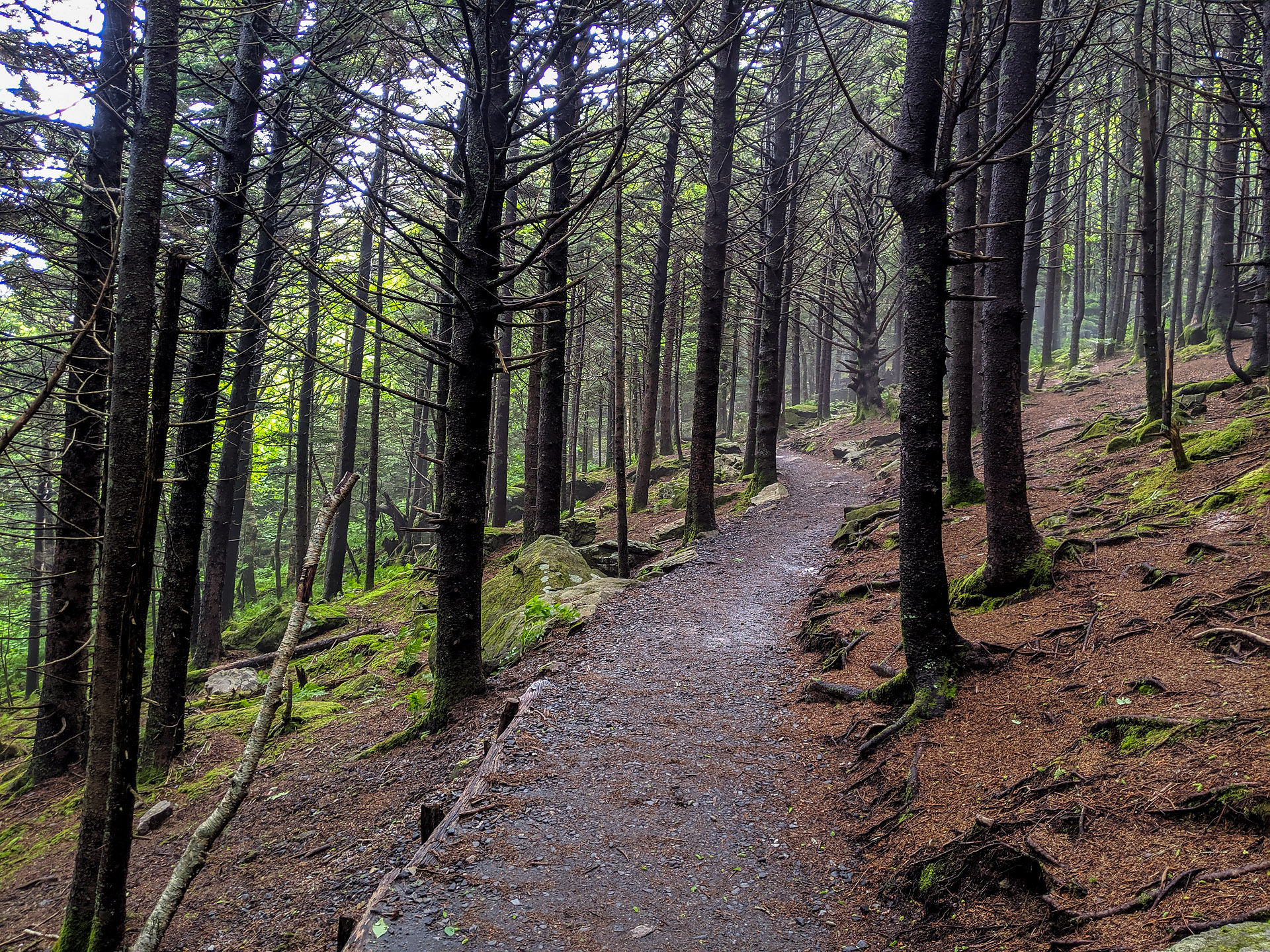 With the weather set to improve later in the day, we decided to spend some time on the AT to wait out the persistent cloud cover. We continued across the blustery highlands, past the side trail for the third bald (Grassy Ridge), and descended down into the forest on the AT. The trail quickly plunged down from the highlands, leaving us completely enveloped in the thick woods. We continued walking under a dense, green canopy until we reached the Overmountain Shelter at Yellow Mountain Gap – some 3.75 miles and 1,000 feet of elevation loss from the junction to Grassy Ridge Bald. 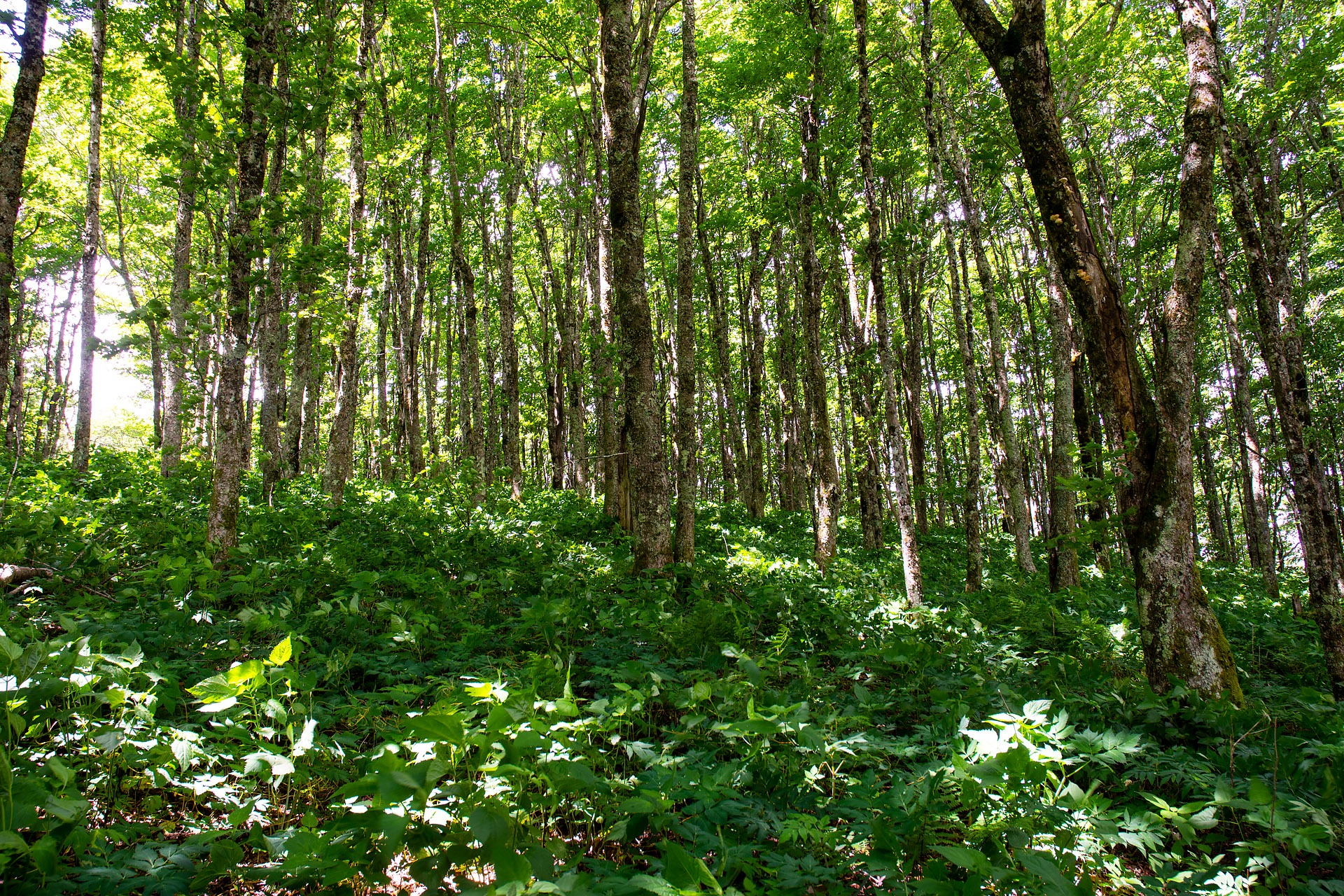 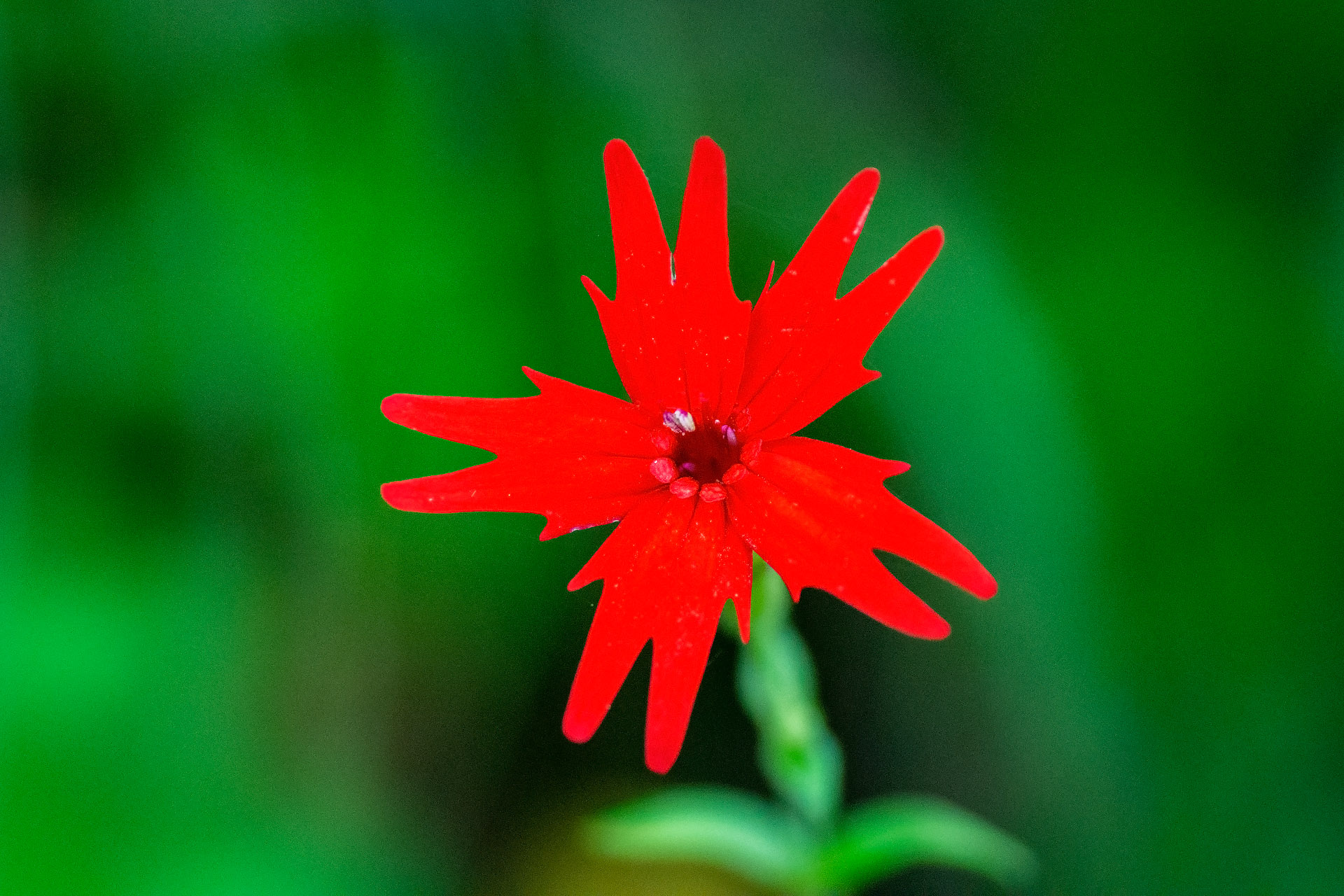 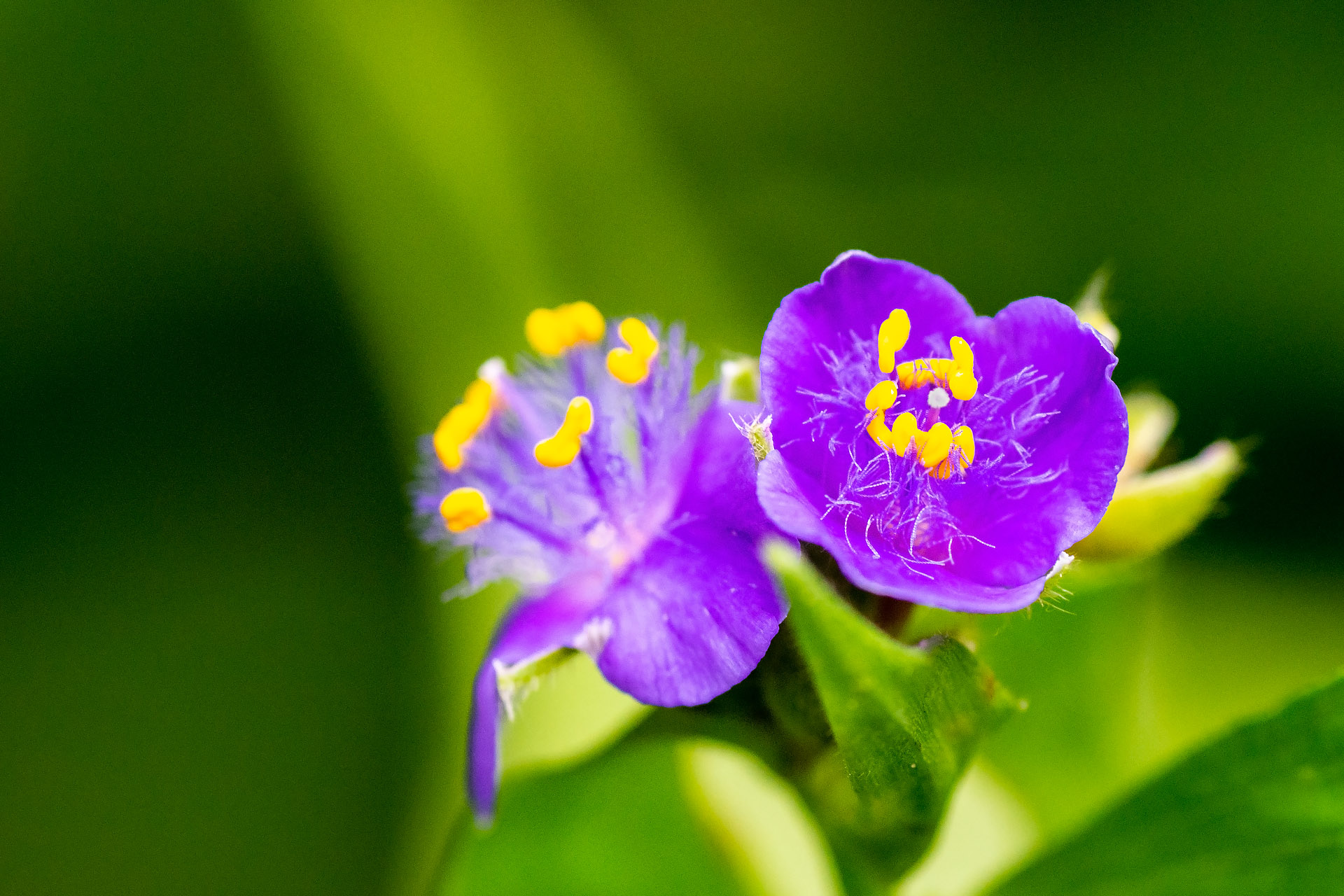 As we watched the midday sun finally overtake the stubborn morning cloud cover, we headed back for the highlands, hoping for some clearer views from Grassy Ridge Bald. Much to our delight, when we reemerged from the forest four miles later, the landscape had completely transformed. The warm, mid-afternoon sun now bathed the verdant uplands and you could see for miles under bright, blue skies. 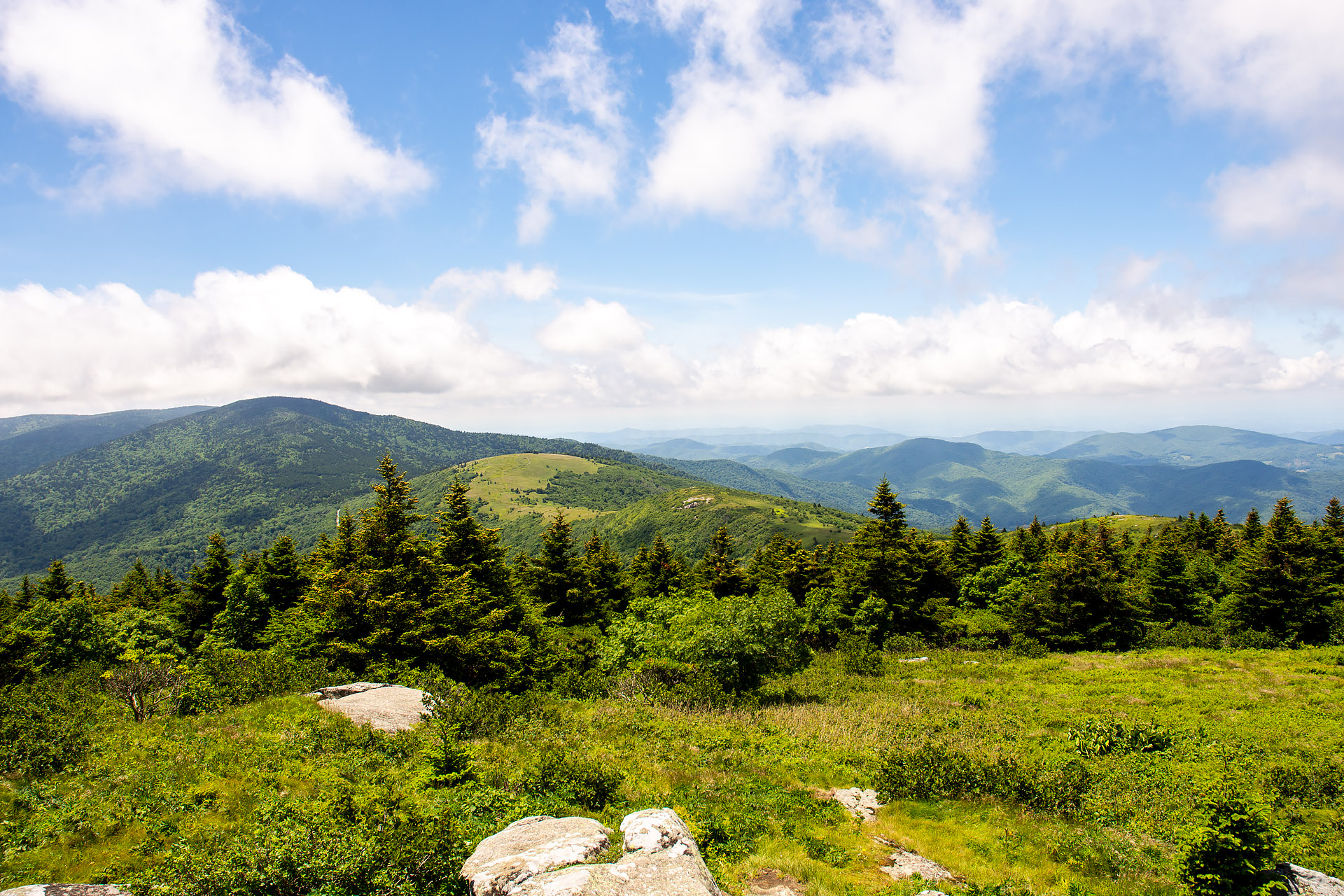 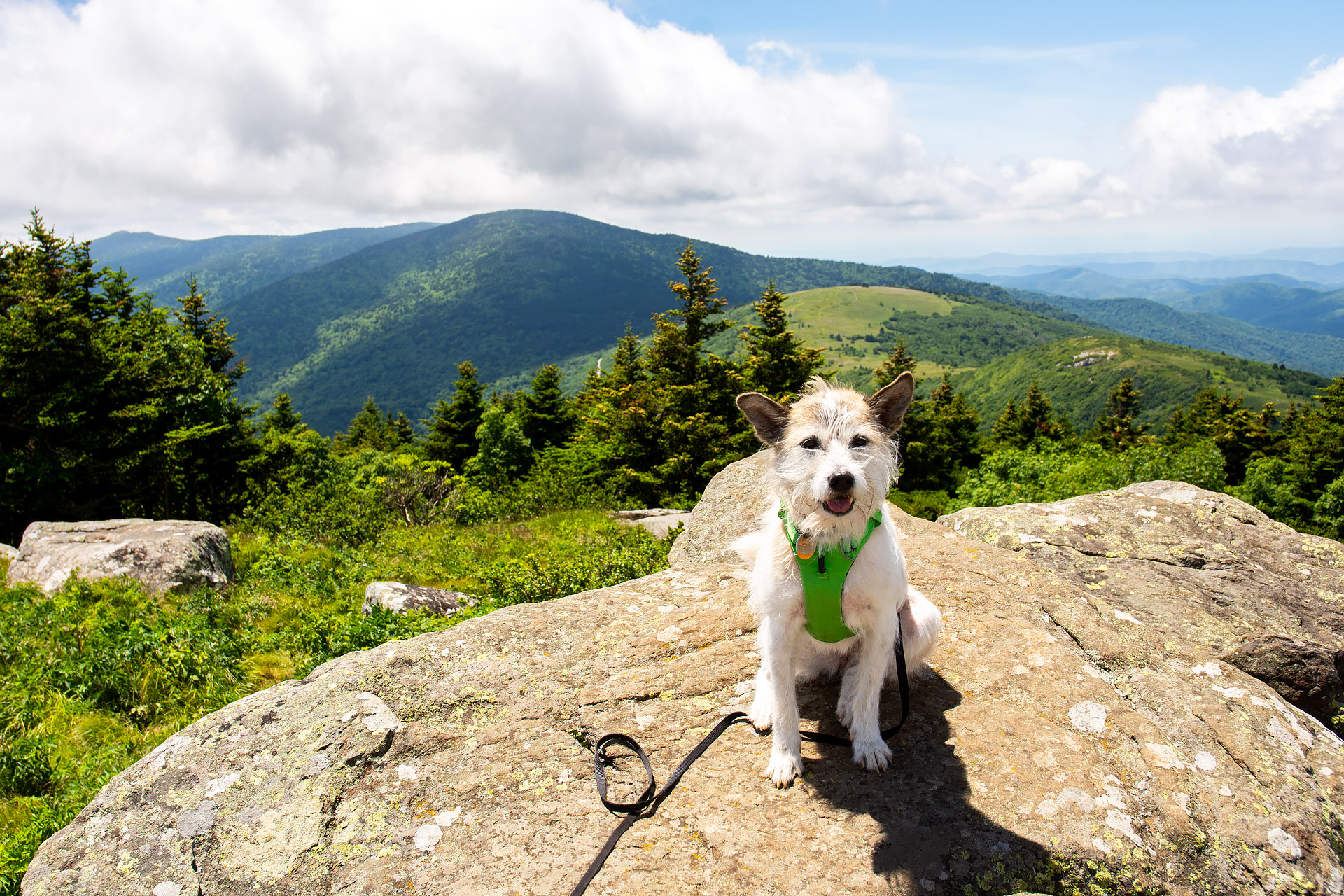 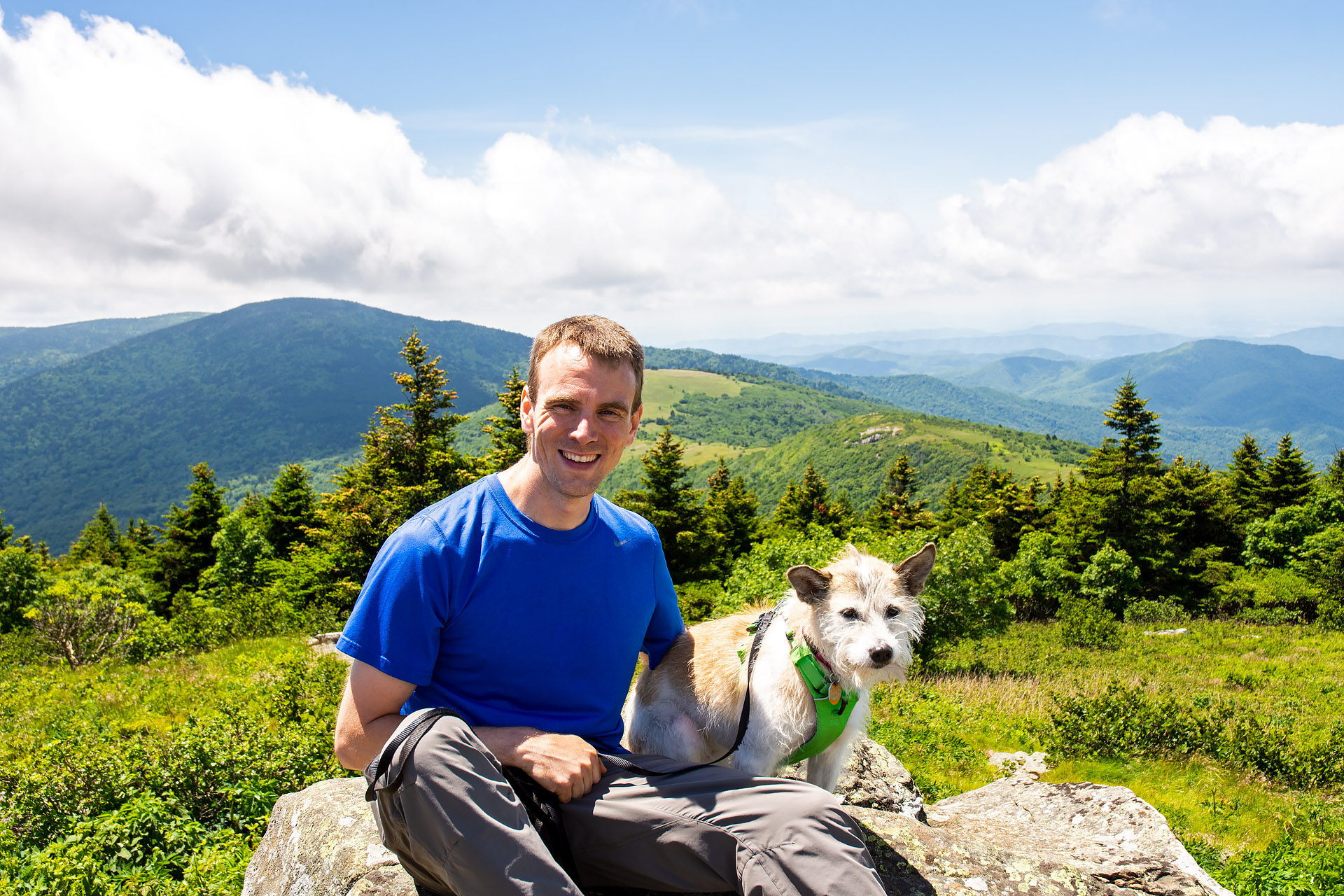 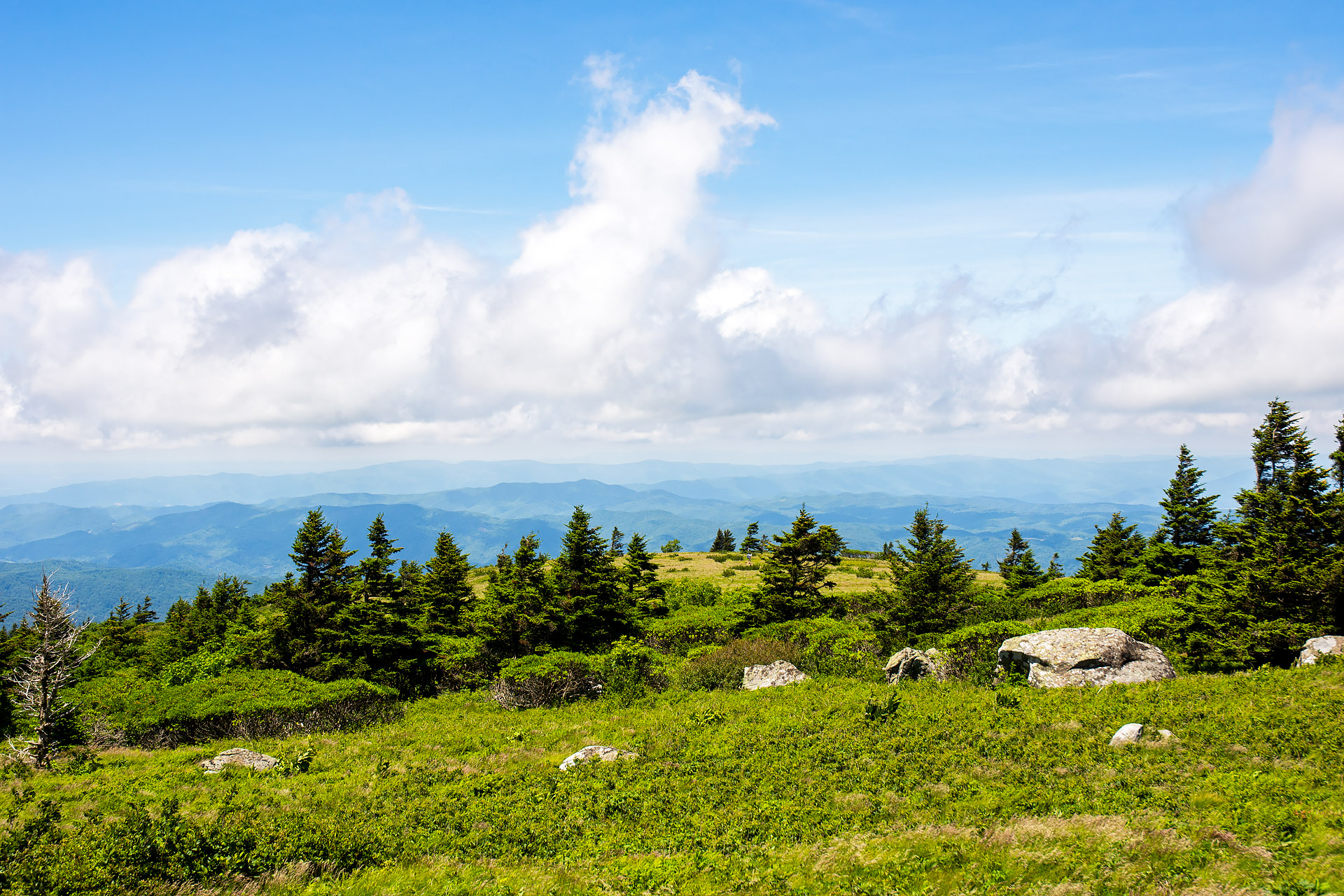 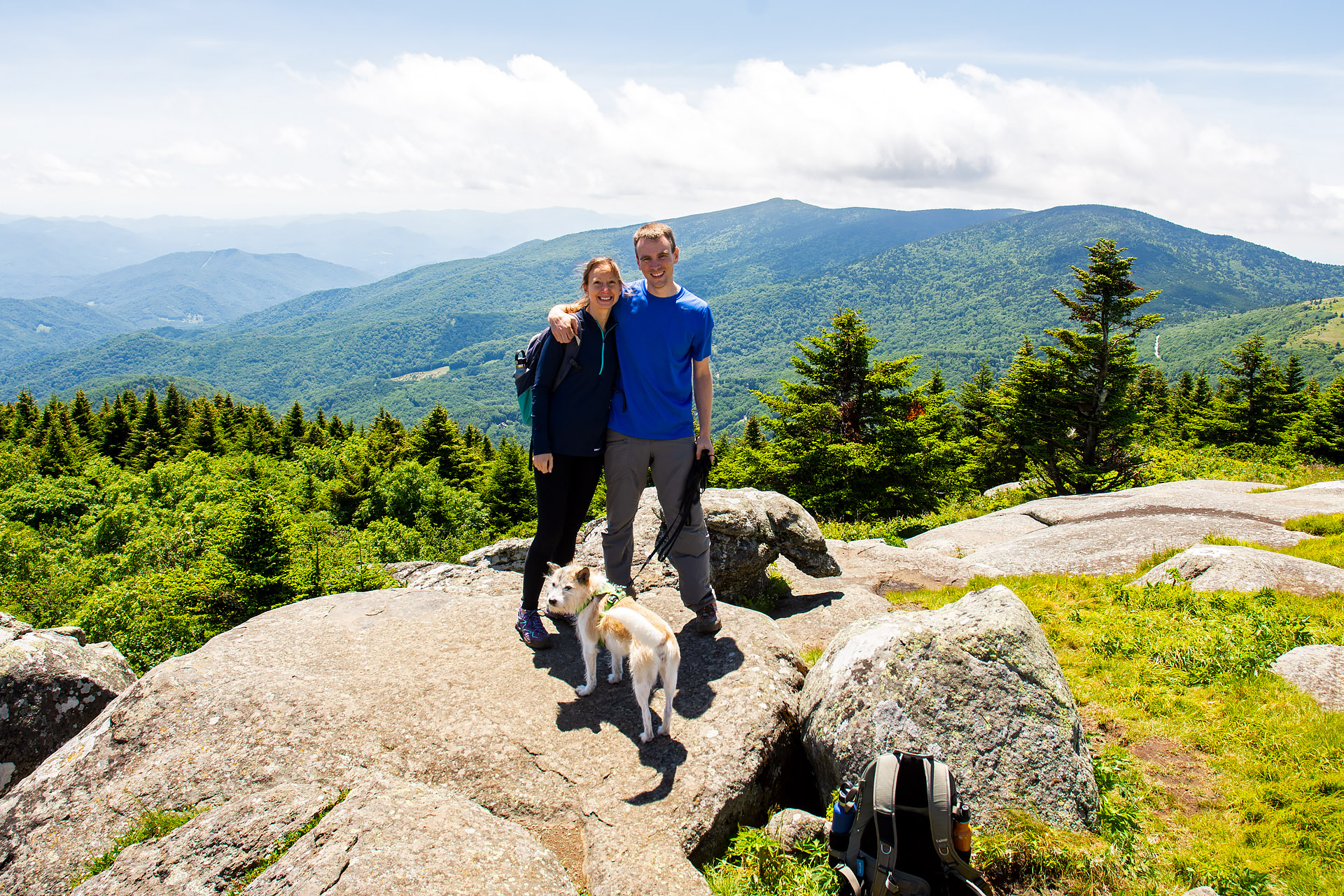 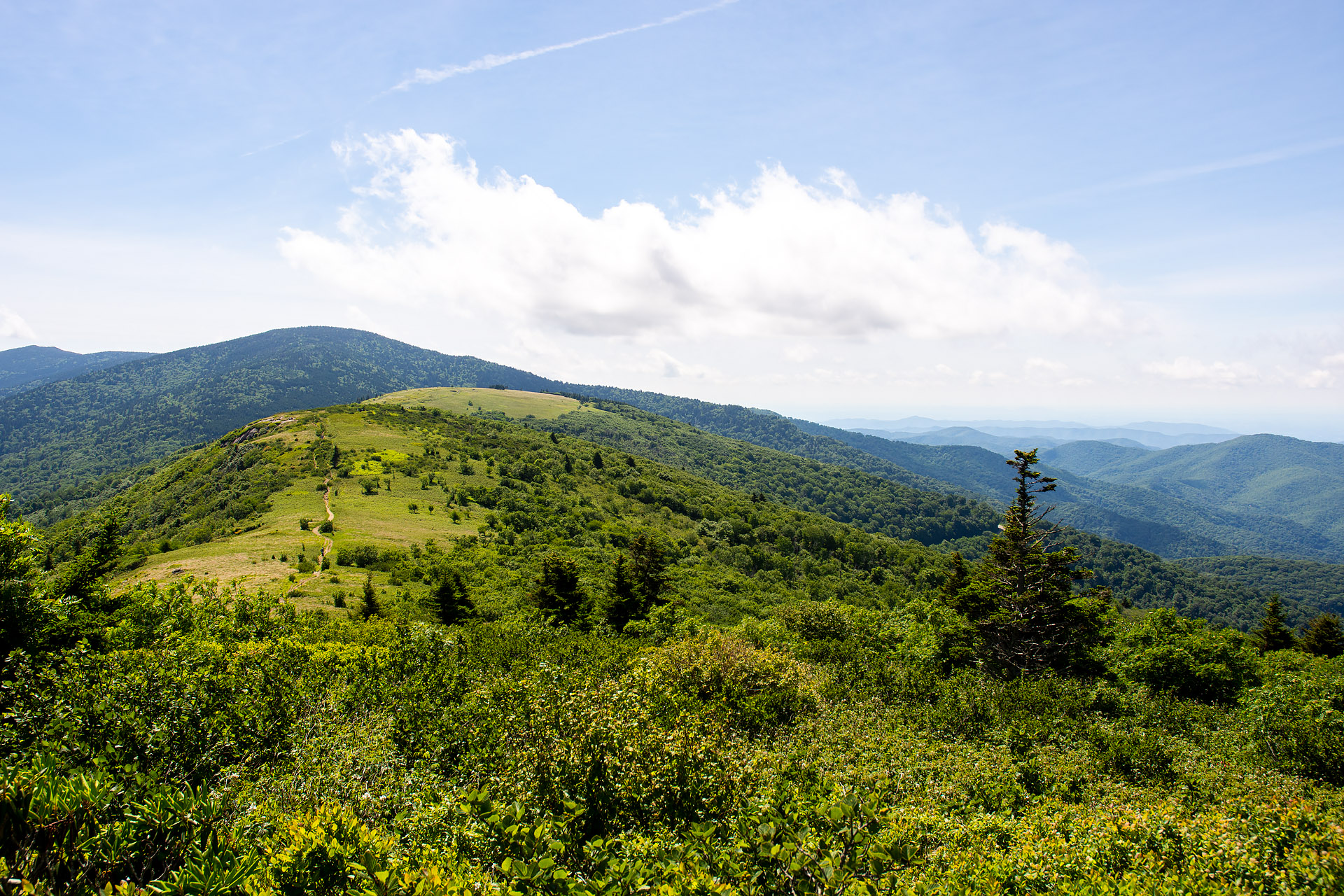 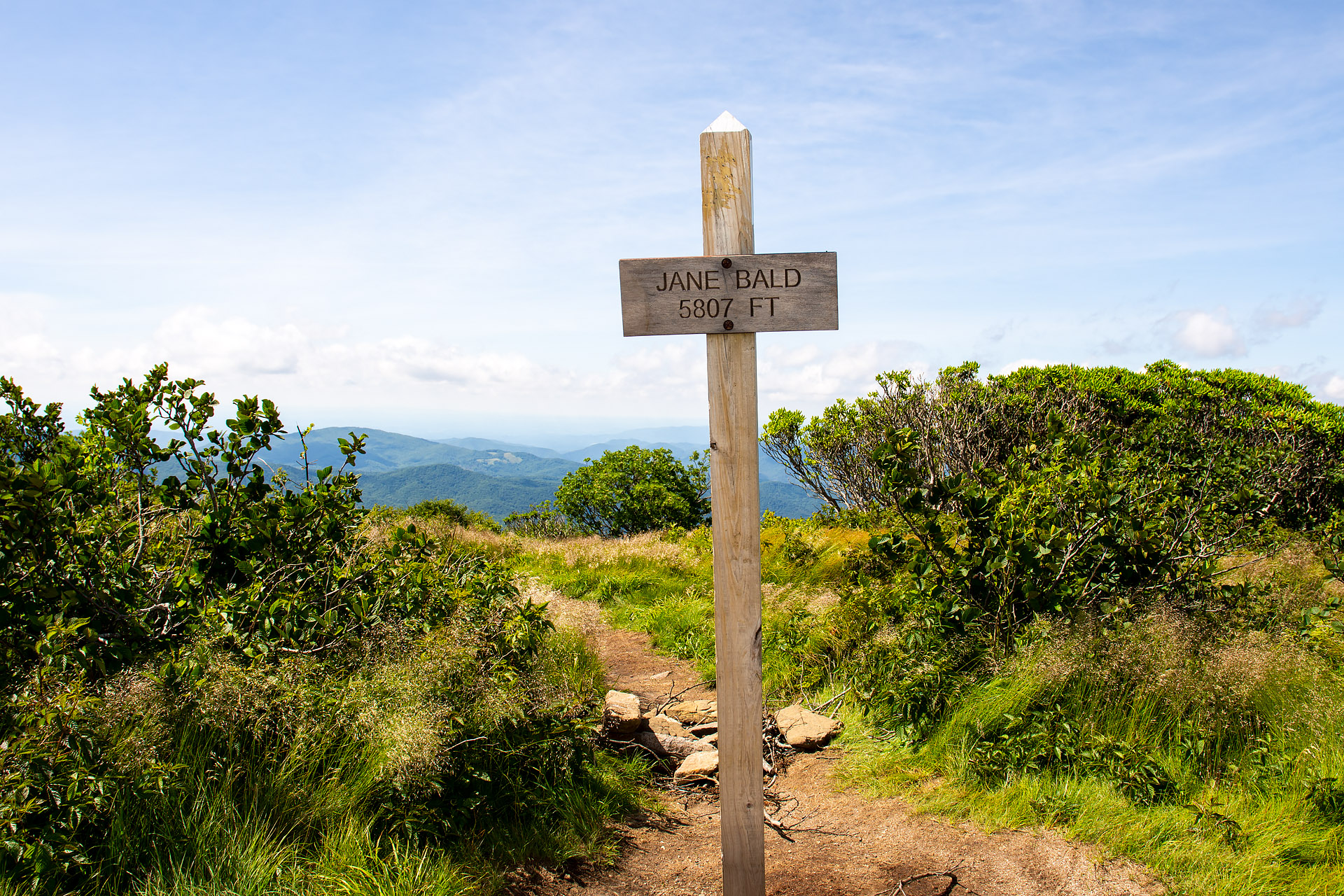 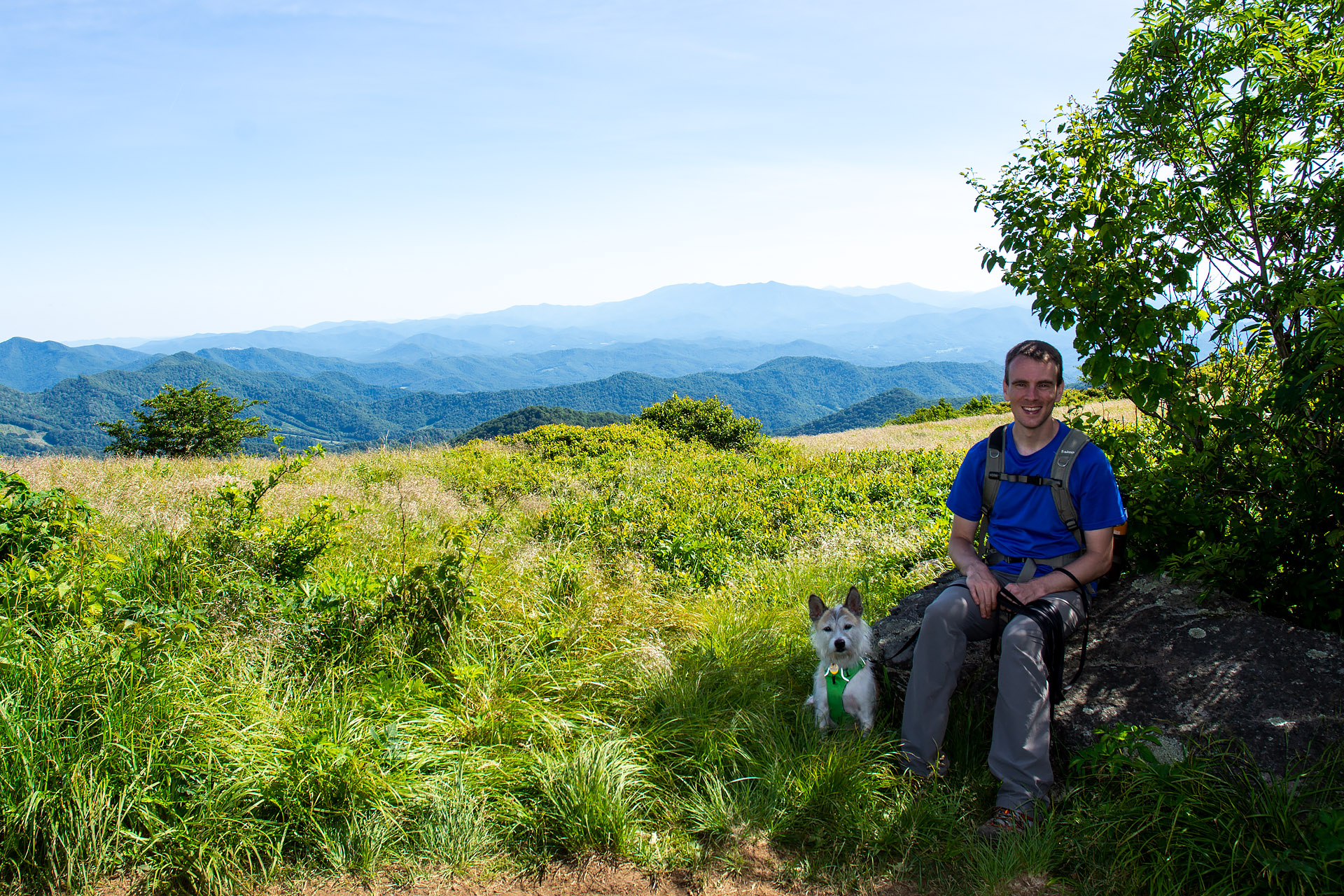 Spring’s transition to summer in the Roan Highlands is marked by June’s much-anticipated rhododendron bloom. For a few weeks each summer, the characteristically green hillsides transform to a sea of vibrant fuchsia. Unfortunately, an early peak immediately followed by torrential rains left nothing but than some bare, withered shrubs. But while we may have missed the mountains ablaze in their magenta glory, we were lucky to spot a handful of Gray’s lilies along the trail. The flowers are both rare and endangered –  blooming only in early summer in the Appalachians of North Carolina, Tennessee, and Virginia. Unfortunately, numbers are declining due to increasing habitat loss, spread of fungal disease, and illegal collection. 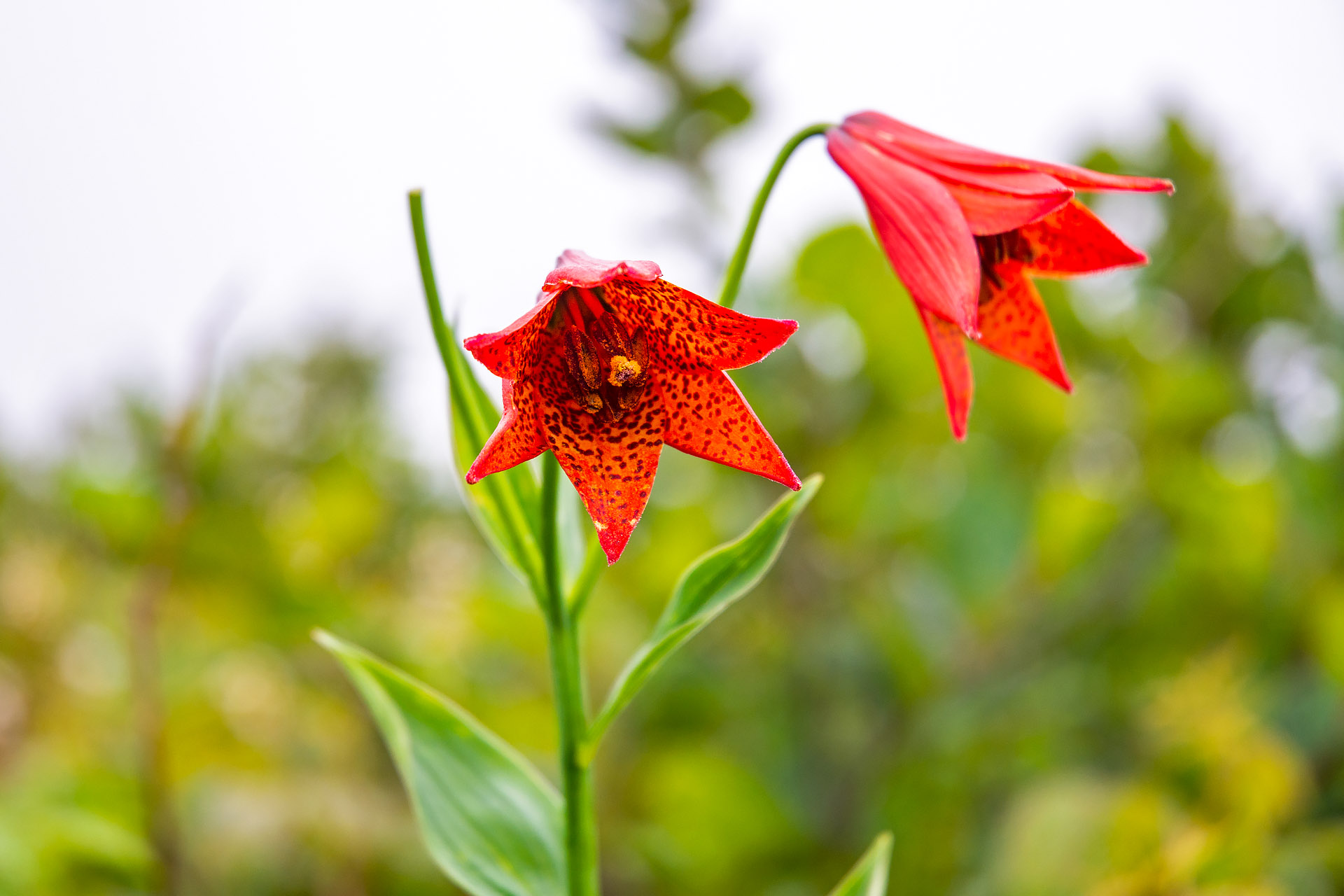 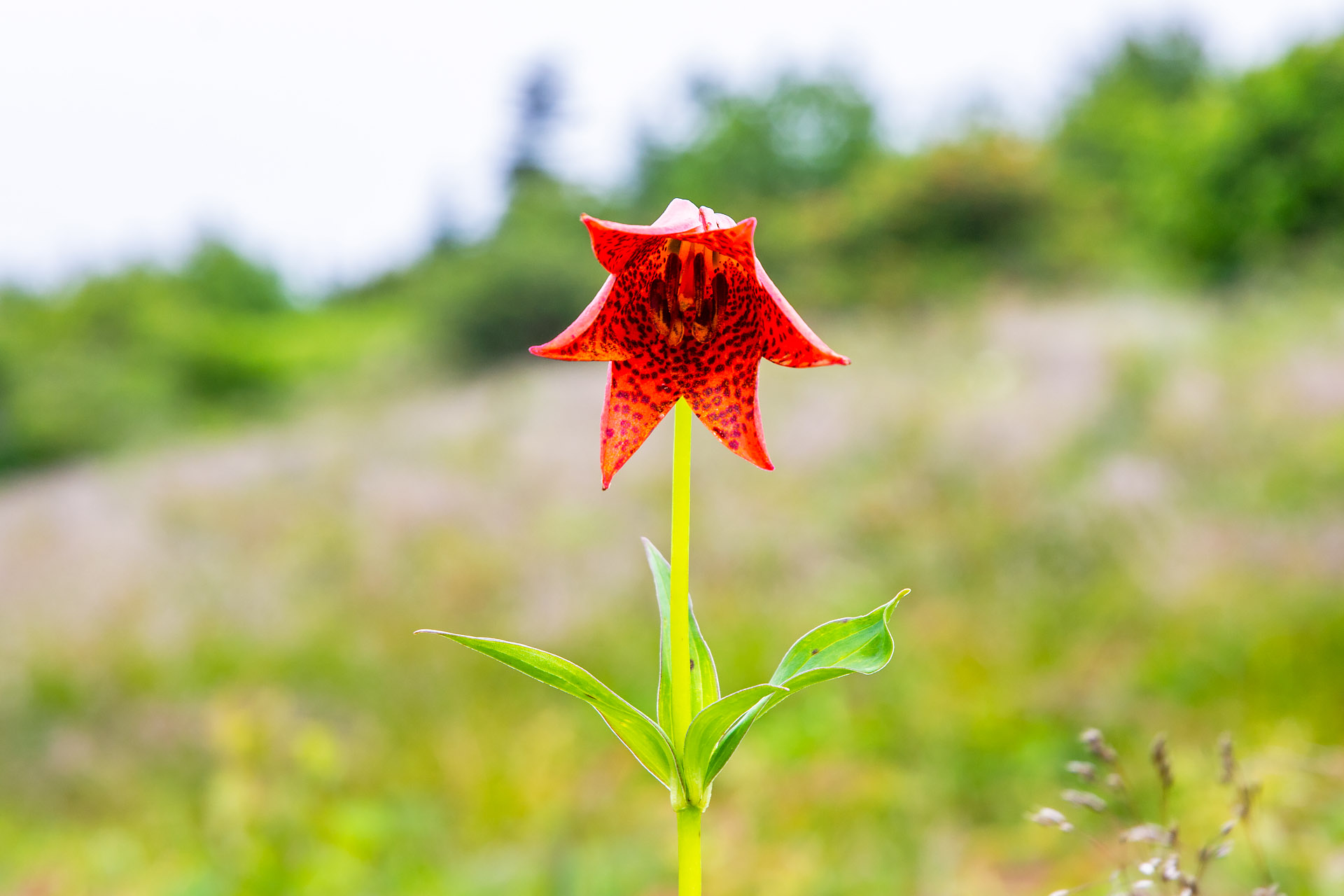 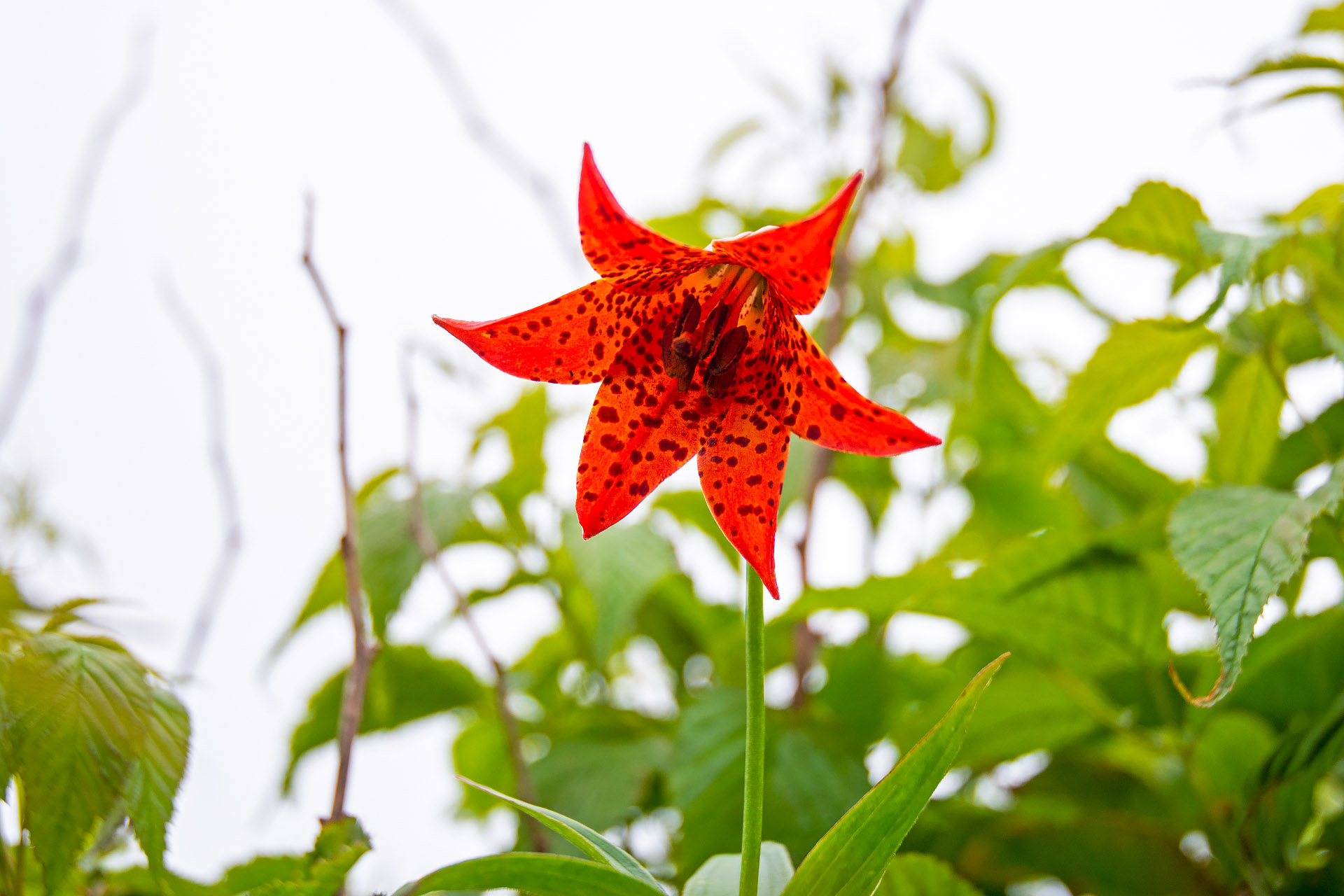 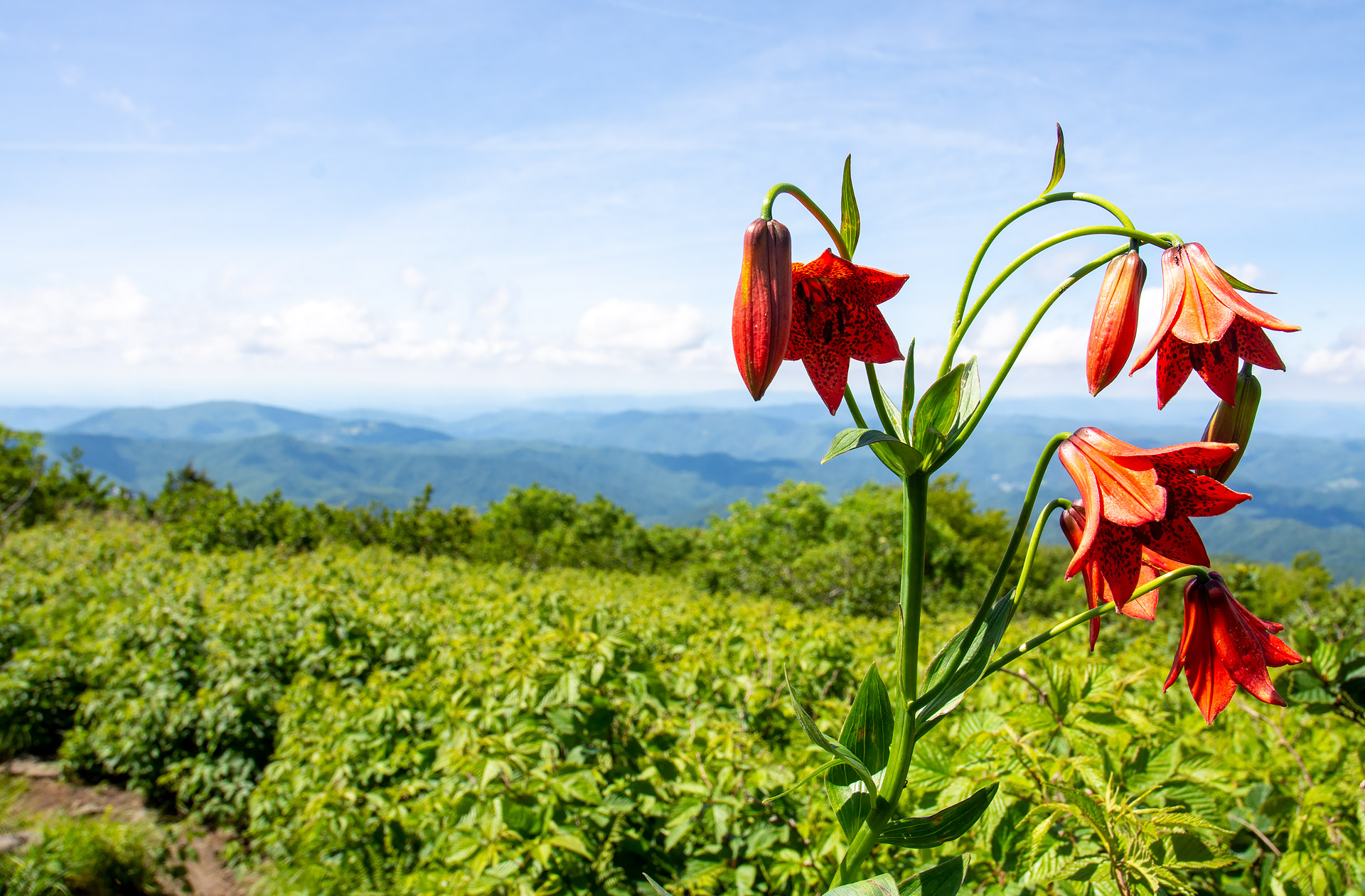 In addition to the stellar views and beautiful wildflowers atop the Roan Highlands, we were fortunate to encounter a young fawn. As we descended Grassy Ridge to return to Carver’s Gap, we saw a doe leaping up the hillside through the tall grass. Not expecting to see wildlife, we stood surprised, fumbling to get our lenses pointed in time. We paused to peer up along the ridge and suddenly heard a soft bleat. Suddenly, a young fawn emerged from the meadow in our direction. He’d clearly lost sight of his mom for an instant, and seemed to be asking us to help find her. The fawn quickly noticed Sanchez and began prancing excitedly, kicking his hind legs in the air as if inviting her to come play. He hung around for a few minutes, playfully insisting we escort him back through the meadow, before finally scampering back up the hill in the direction of mom. 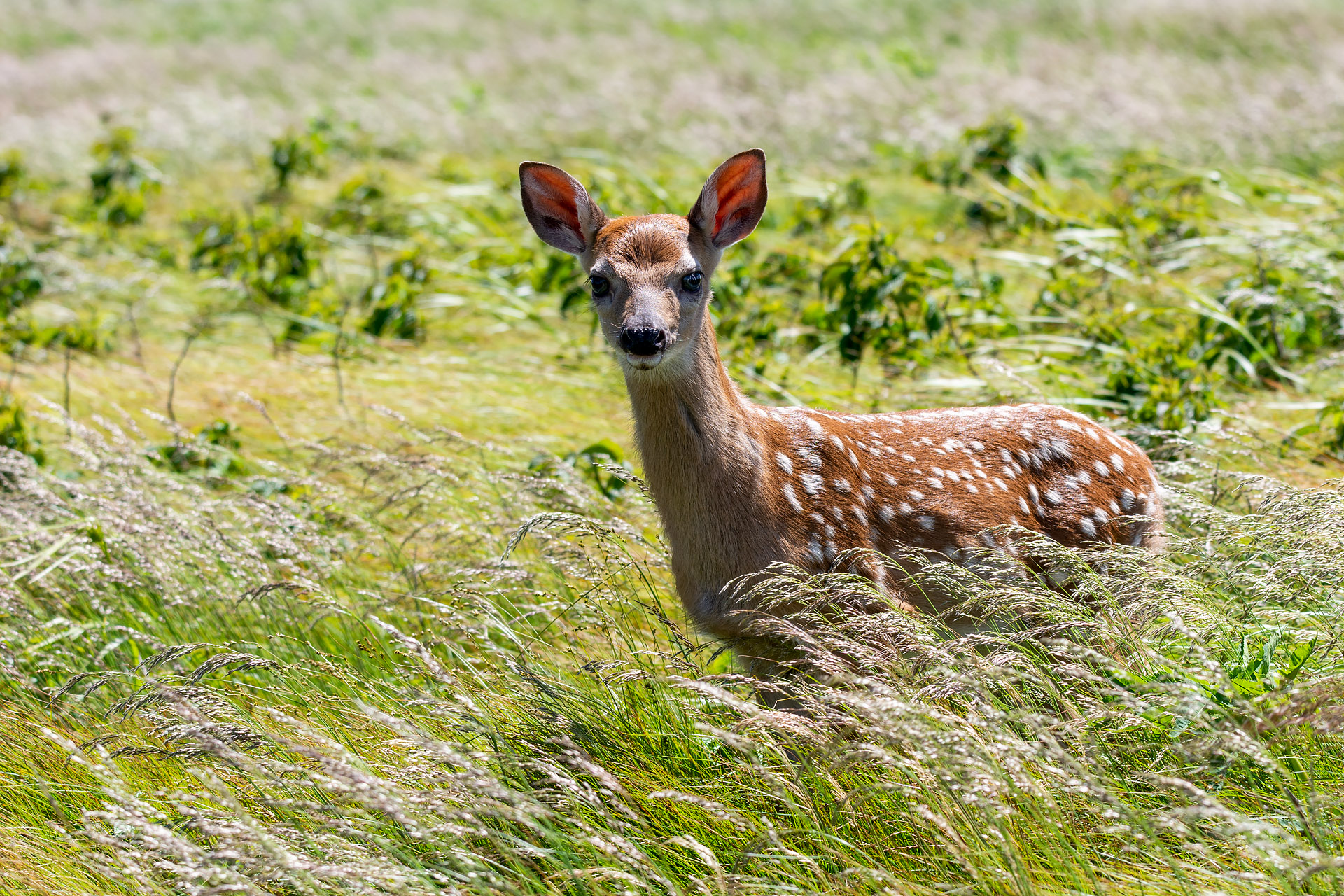 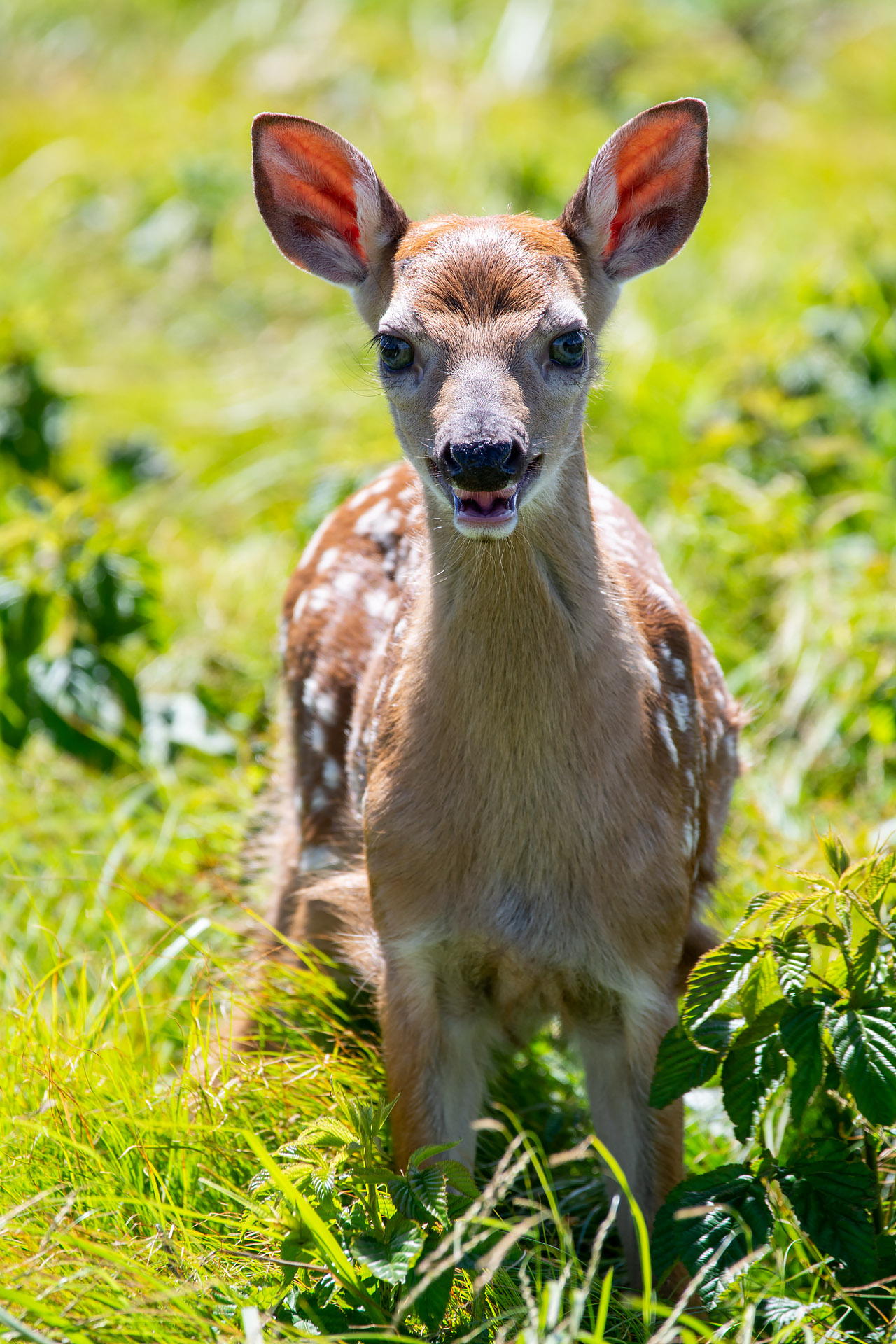 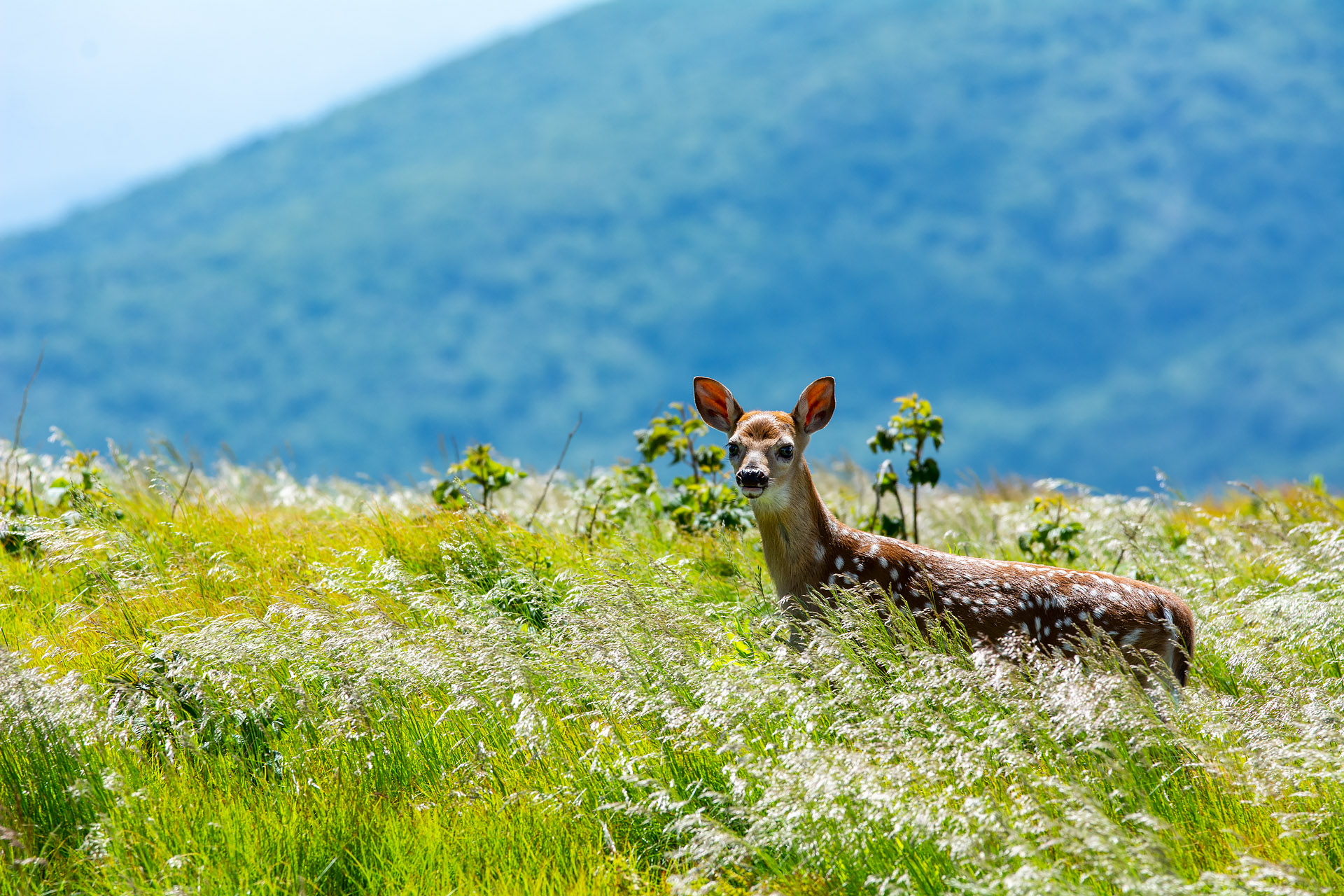 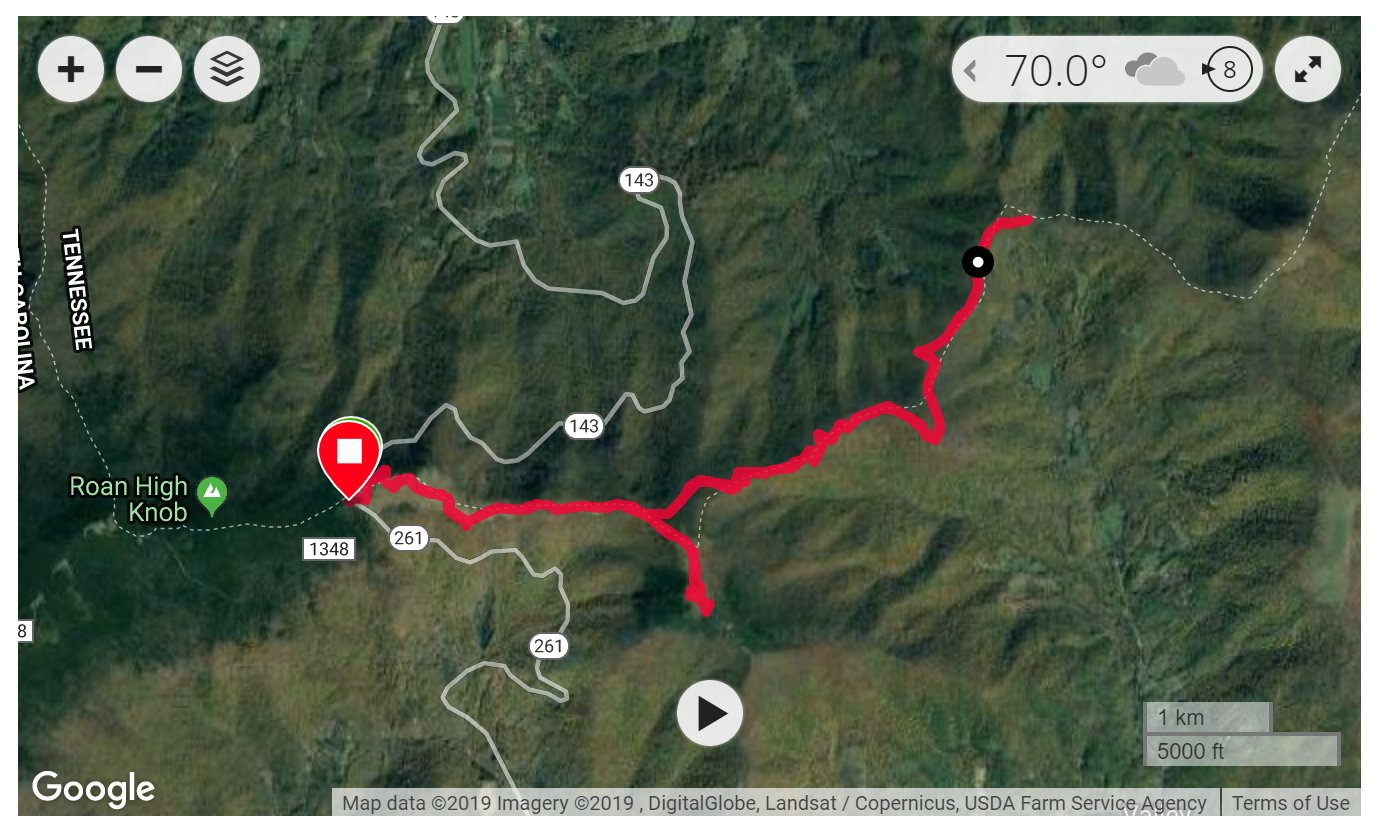