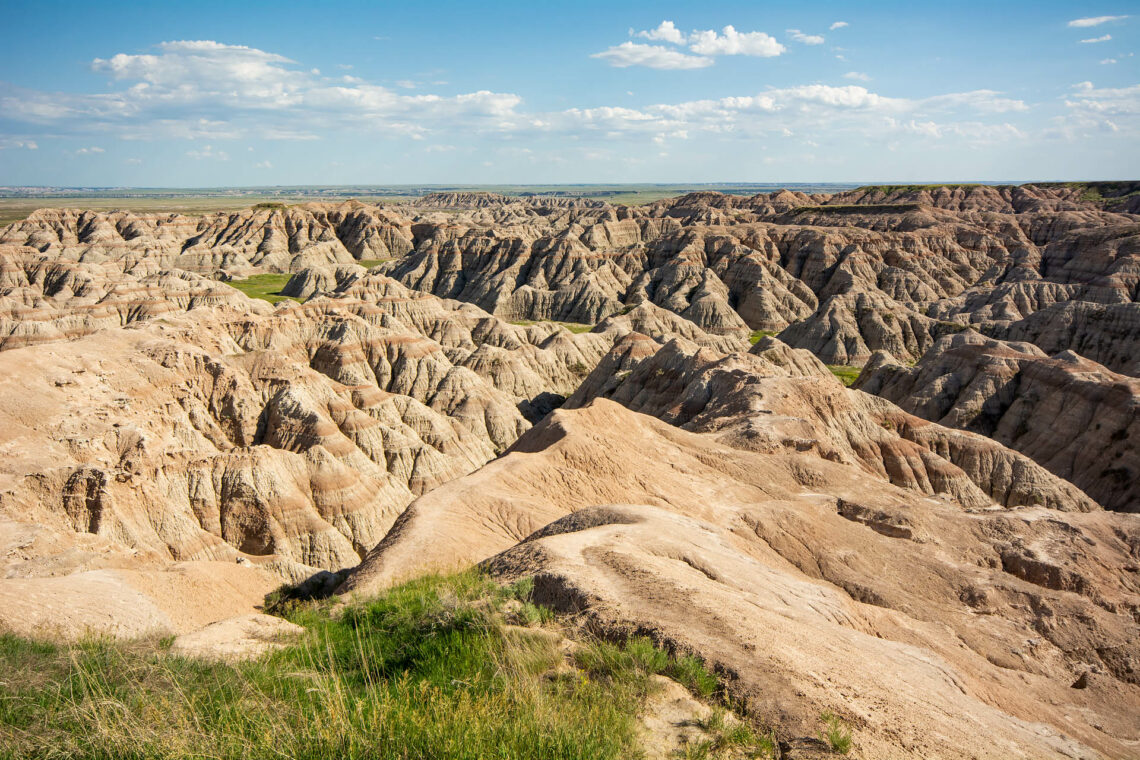 With its weatherworn maze of buttes and spires, Badlands National Park is one of the most unique and unexpected landscapes in the central U.S. Here, countless layered rock formations – primarily made up of claystone, sandstone, limestone, volcanic ash, and shale – date from 28 to 75 million years old. The colorful strata were formed over the course of this 50-million-year period by the gradual deposition of rocks from various sources, including an ancient inland sea, prehistoric rivers, and the inpouring of sediments from both eruptions in the Great Basin (present day Utah and Nevada) and erosion in the nearby Black Hills.

Around 500,000 years ago, as the Cheyenne and White Rivers began to cut through the landscape, the Badlands began eroding. Today, the ever-changing sculptures are being gnawed away by water and wind at a rate of about an inch per year. Consequently, scientists predict the Badlands will disappear entirely in another half million years – a blink of an eye on a geologic time scale.

If you’re traveling through South Dakota, the Badlands are easily accessible from I-90; Badlands Loop Road (SD 240) traverses some 40 miles of the national park, and can be entered/exited directly from I-90 (exits 110 and 135). More than a dozen overlooks pepper the loop, allowing visitors to examine the rugged rock formations from a variety of vantage points.

In addition to exploring by car, visitors can also hike or bike the Badlands. While the park offers only eight official hiking trails, most of them quite short, there is an open hiking policy, meaning visitors are allowed to explore off-trail under their own discretion. Unfortunately, if you’re traveling with a dog, pets are not allowed on any of the park trails (not even some of the short boardwalks). In fact, dogs are not allowed on hiking trails in most U.S. national parks, a major disappointment if you enjoy hiking with your furry friend. 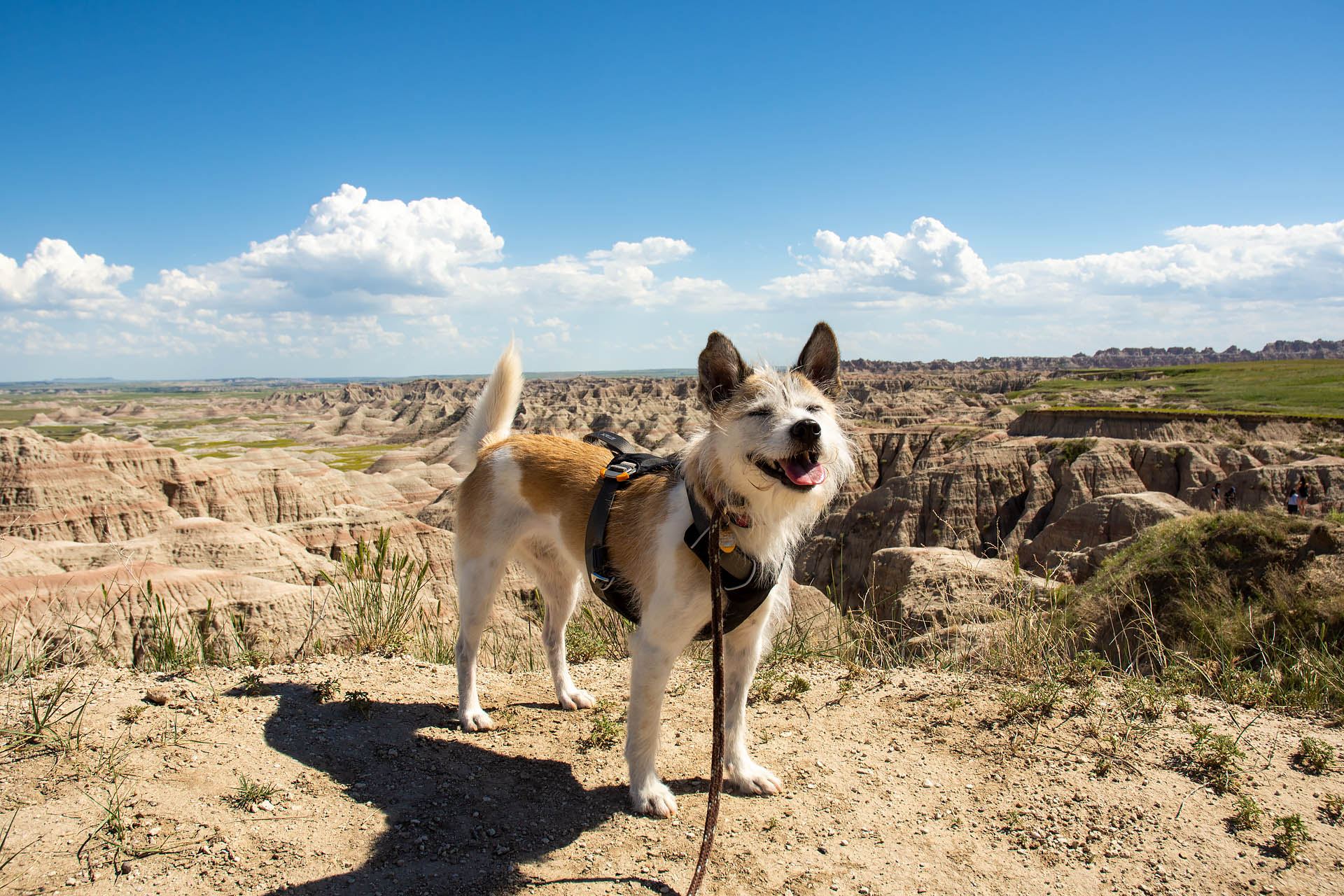 Because we were traveling through the area with Sanchez, we were restricted to taking in the scenery from the Badlands Loop. That said, the day we visited the park was around 95F, so I’m not sure we’d have been doing any real hiking anyway – the intense June sun was blistering, and there’s not a sliver of shade to be found.

While we’re not usually keen on limiting our exploration to the car window, the drive around the park was pleasant enough. Aside from the easternmost overlook, Big Badlands, the park wasn’t overly crowded. We followed the road as it wound gently around the Badlands Wall, the towering escarpment that gives way to endless tiers of jagged spires and pinnacles. Around each corner stood a new geological masterpiece, each unique in history and grandeur. 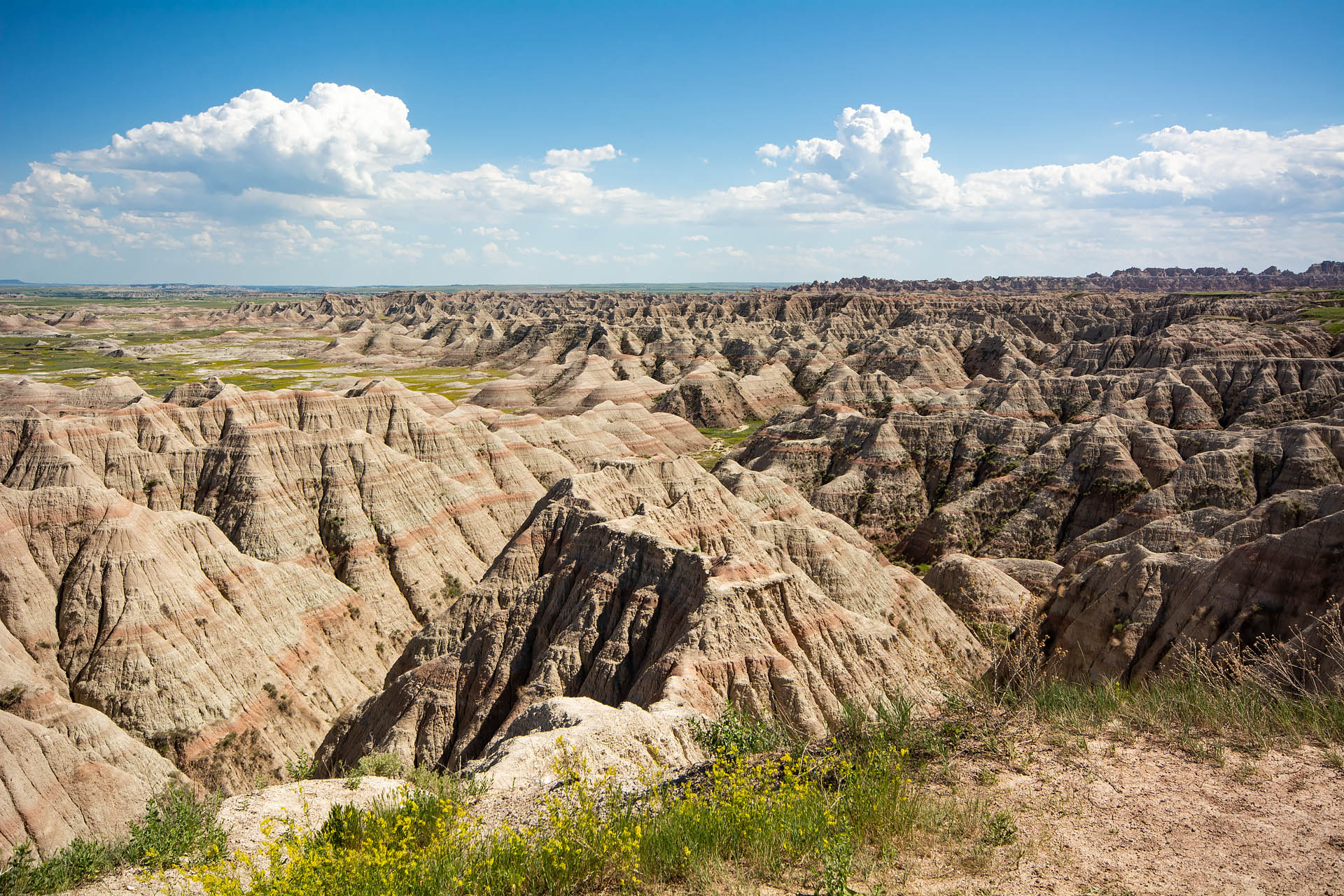 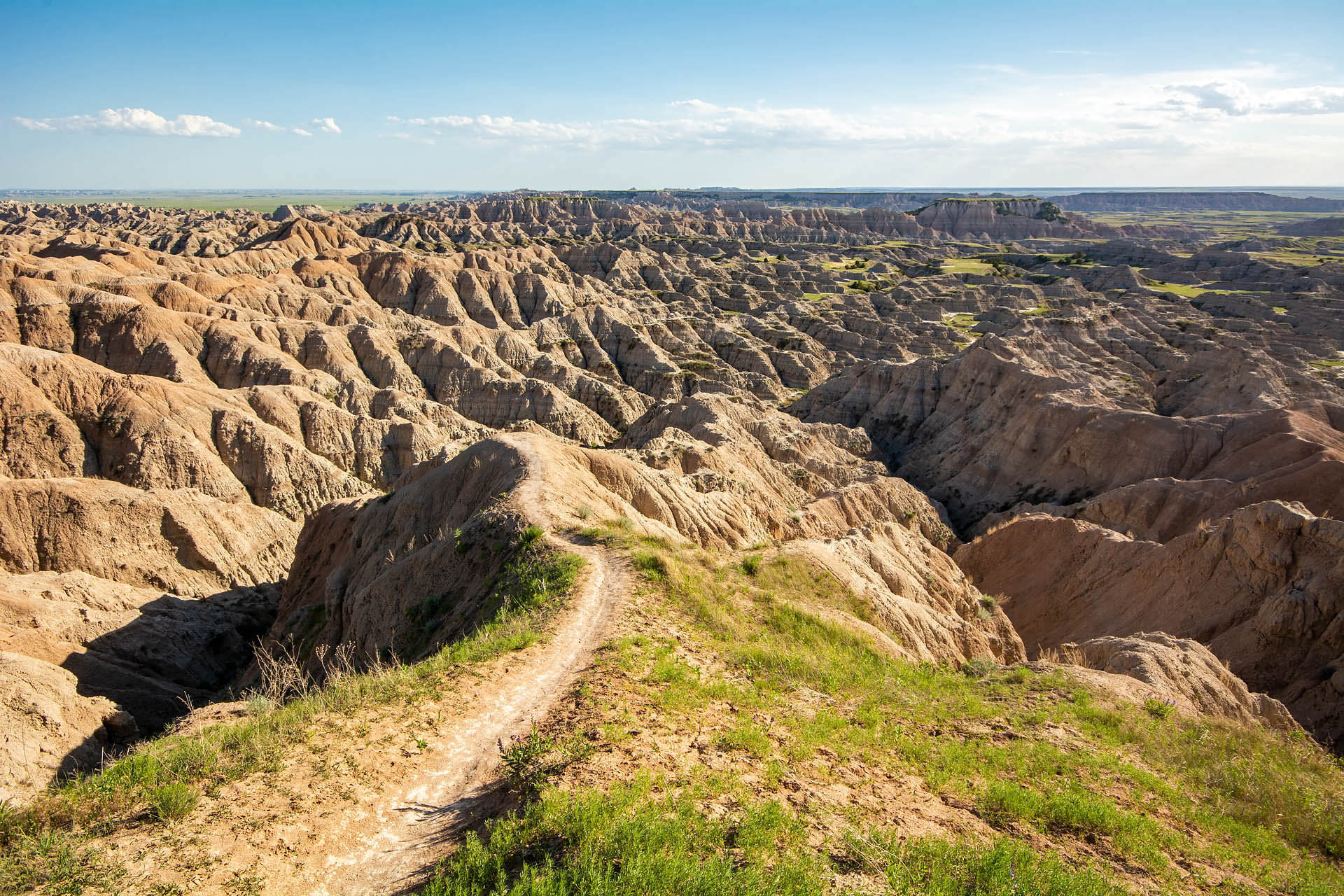 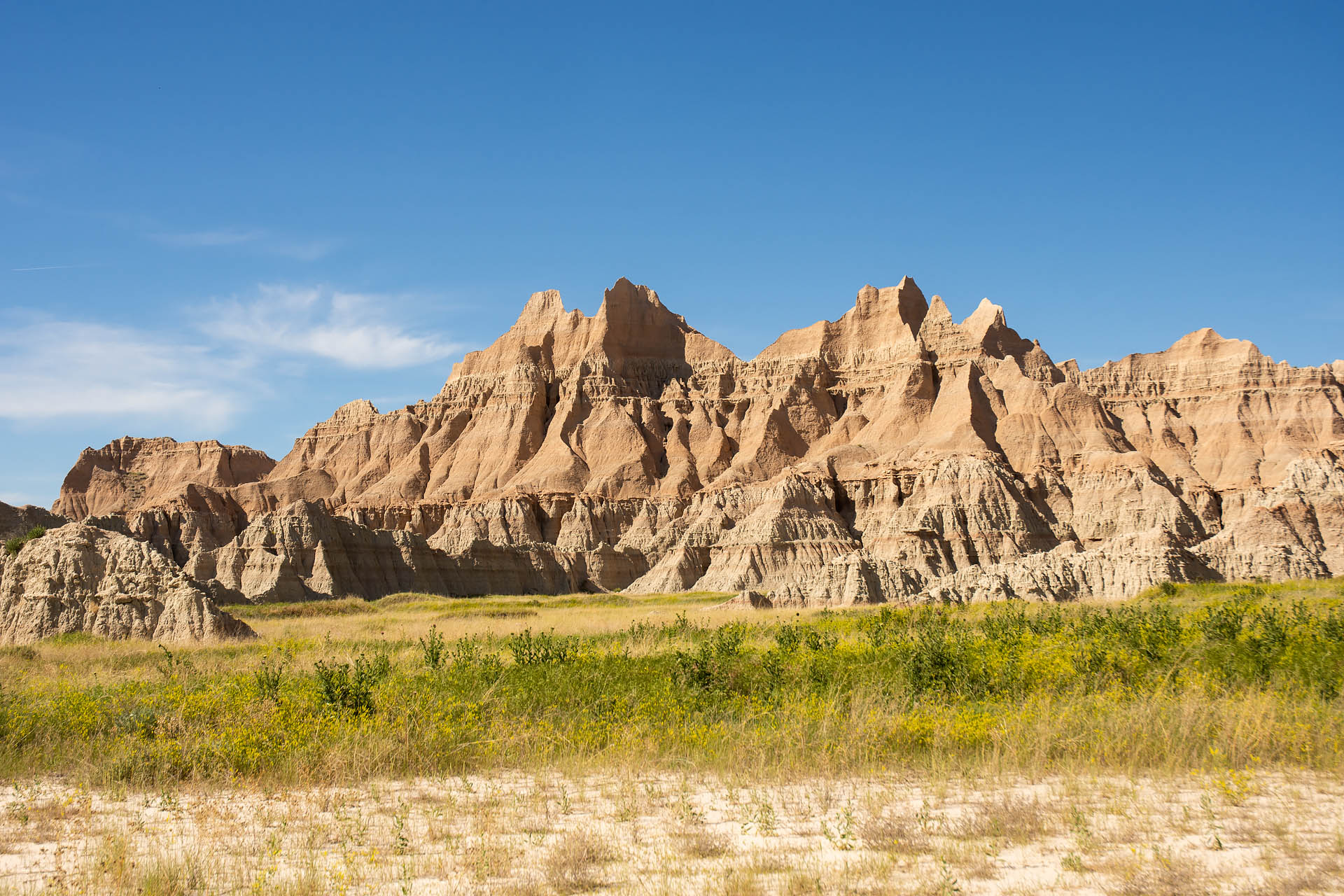 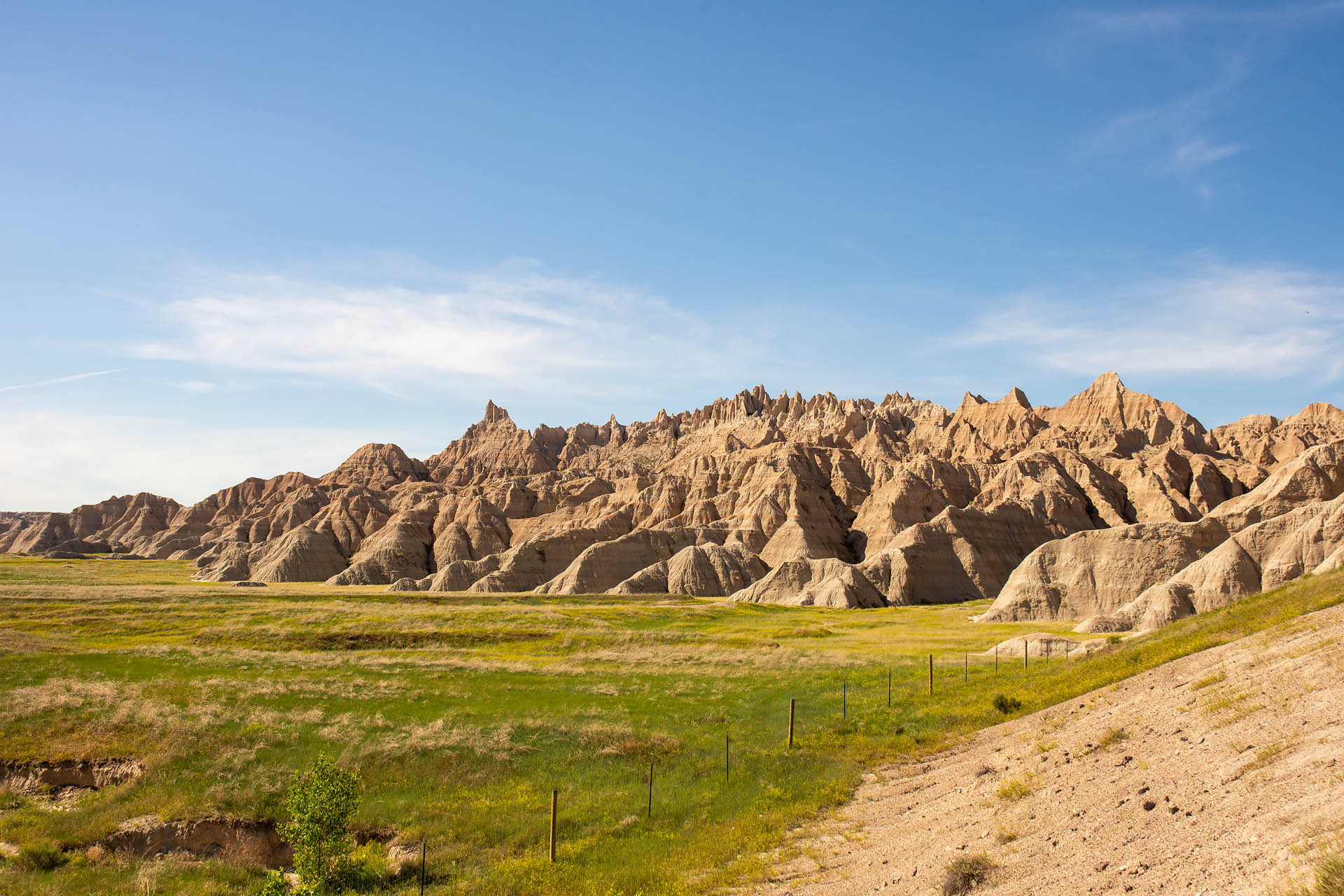 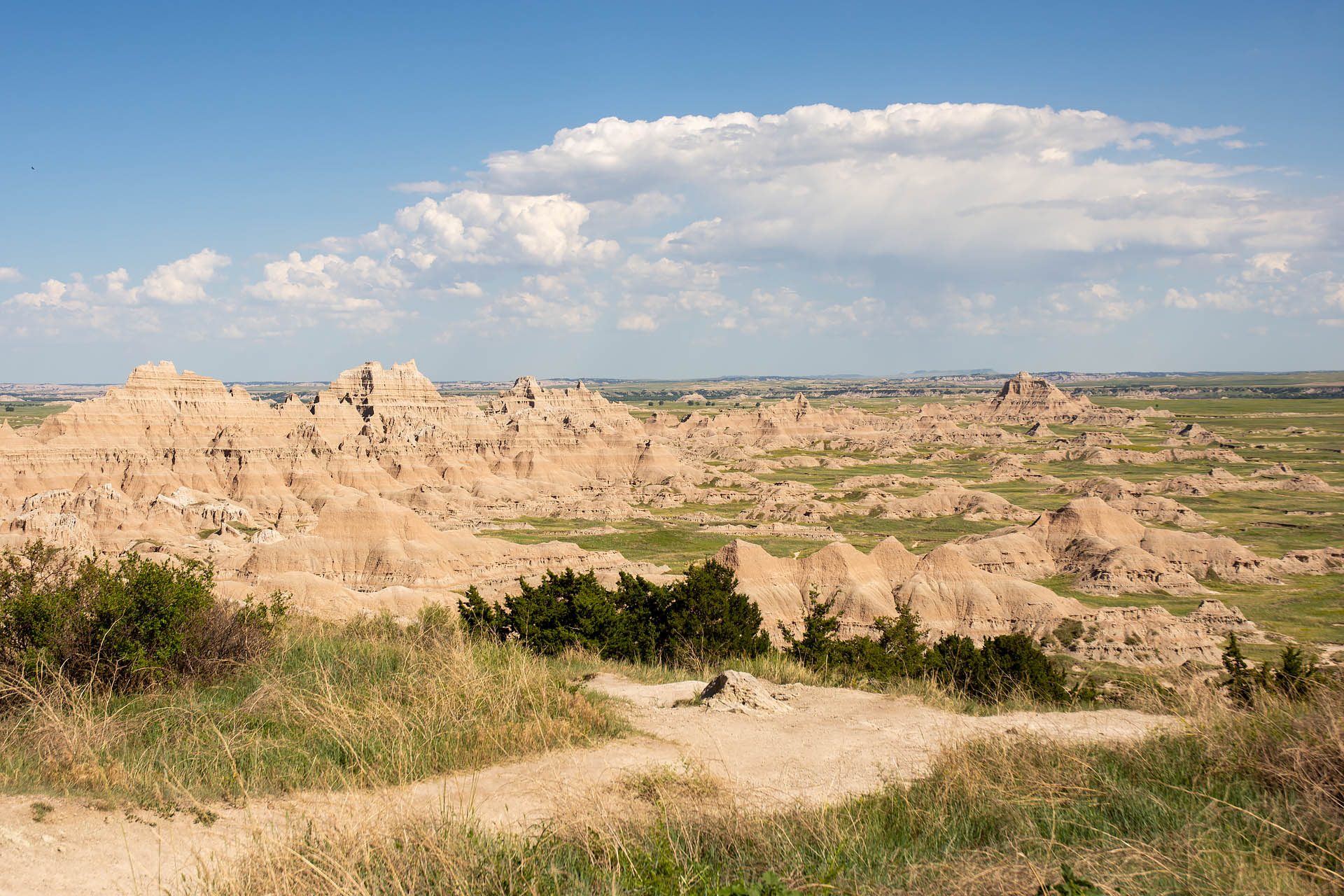 One of the most striking features of the park was the Yellow Mounds. The stunted hills are actually fossilized soil beds – the remnants of a shallow, inland sea that once stretched from the Gulf of Mexico to the Arctic Ocean. A distinct part of the Pierre Shale, some of the park’s oldest geology, their namesake golden hue comes from a mineral called Goethite.

As we neared the end of the loop road, we opted to forgo a return to I-90 and instead head down Sage Creek Rim Road, a less-frequented dirt road that winds through the grassland wilderness. The Rim Road offers a tranquil opportunity for spotting wildlife, and includes a stretch of road that passes alongside a prairie dog town. In addition to spotting a small herd of bison (note: 300mm zoom used here), we watched with amusement as dozens upon dozens of chirping prairie dogs scampered and tumbled with abandon across the open plain. 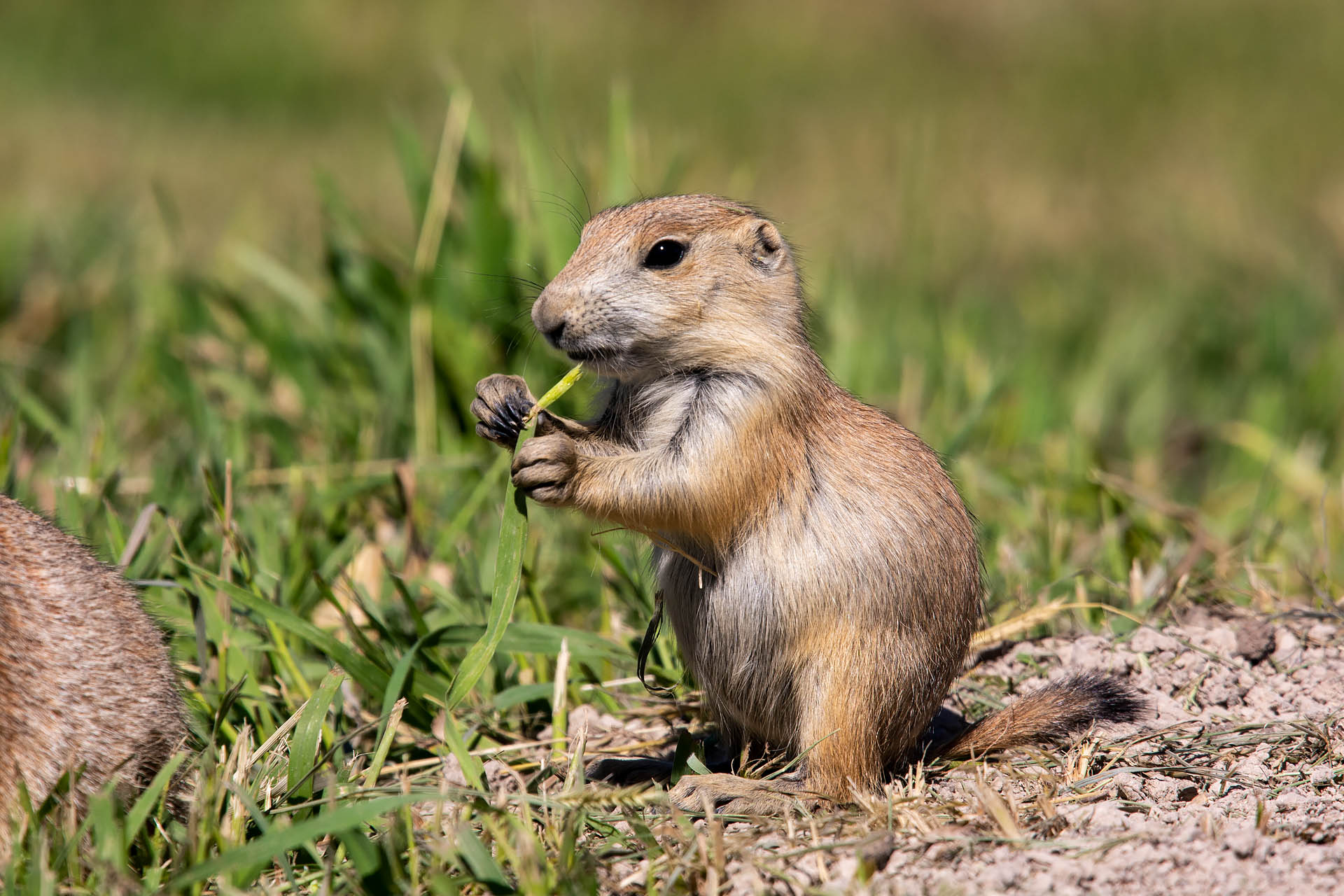 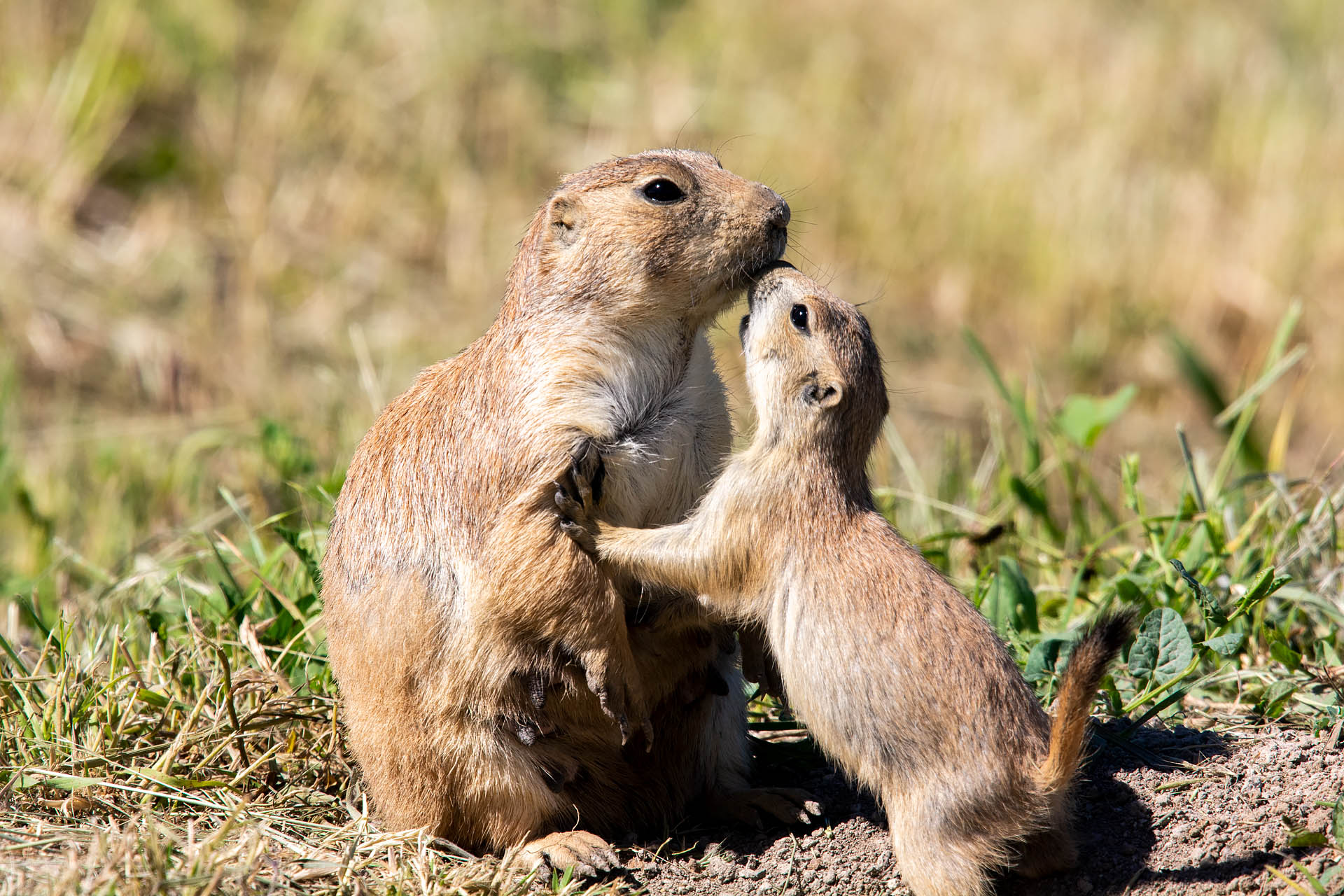 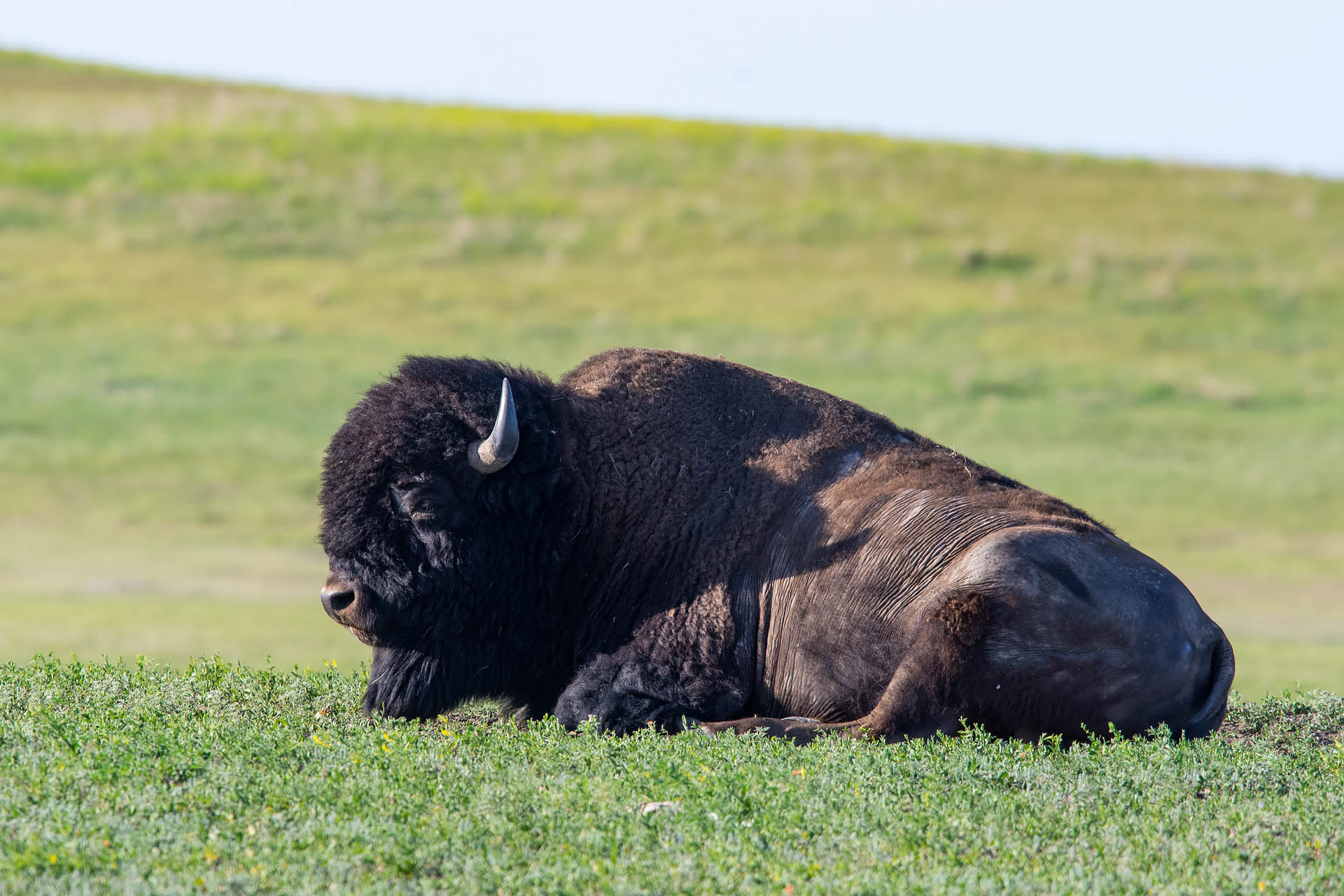 If you find yourself traveling through western South Dakota, the Badlands are definitely worth a stop, even if you only spend a few hours admiring the dramatic terrain.

(1) The entrance fee is $30 per passenger vehicle or $15 per person (hiking, biking). Frankly, if you’re just passing through for a few hours on the loop road, it’s a little steep. However, the pass is good for 7 days – a more reasonable value if you’re staying in the area a bit longer.

(2) If you’re interested in getting off the beaten path, Sage Creek Rim Road runs for about six miles passing by a prairie dog colony and a couple of additional overlooks before turning into Sage Creek Road. Sage Creek Rd then turns south for ~18 miles, passing through the northernmost corner of Buffalo Gap National Grassland before connecting to highway 44. If traveling west to Rapid City, this total trip will take you only about 30 minutes longer than rejoining I-90 in Wall.

(3) If you’re keen on hiking, check out the safety tips from the national park’s website. While most trails are short, Castle Trail, the park’s longest, is a 10-mile out-and-back. Both summers and winters in the Badlands can bring extreme temperatures, cell phone coverage is not guaranteed, and prairie rattlesnakes make their home in here. Precautions such as carrying enough water, packing a small first aid kit, and letting someone know your route plan can ensure a safe adventure on foot.