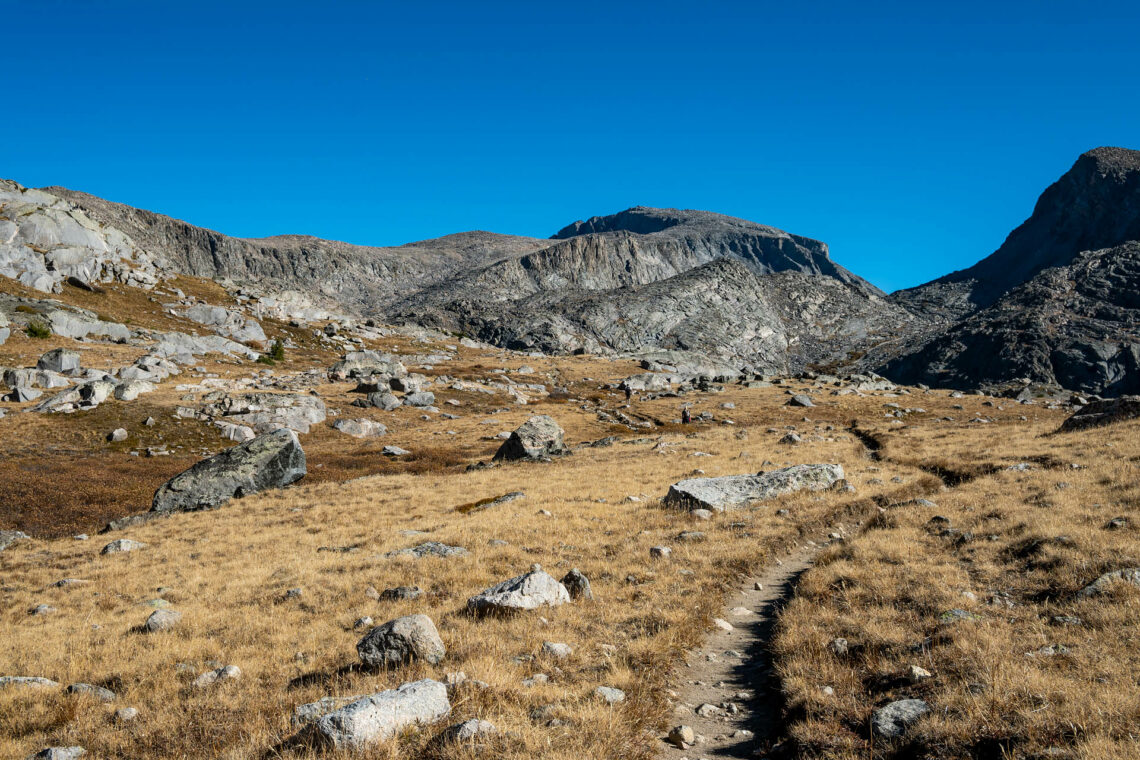 Cloud Peak’s rugged summit is the centerpiece of the Cloud Peak Wilderness – a remote, twenty-seven-mile expanse of backcountry that runs along the spine of Wyoming’s Bighorn Mountains. Cloud Peak’s 13,167-foot summit is the range’s highpoint, soaring handily above its neighbors. What’s more, the mountain boasts a surprising 7,077’ of topographical prominence – making it the most prominent peak in the state and 15th most in the contiguous U.S.

In terms of grandeur, most people probably think of Wyoming’s western ranges – the Tetons and Wind Rivers. However, the Bighorns are unique in their own right. Erupting from the high desert halfway between Mount Rushmore and Yellowstone, the Bighorns seem to be a bit of an overlooked gem. The wilderness here is remote and the alpine scenery striking, and it does require a bit more effort to get out and experience it. 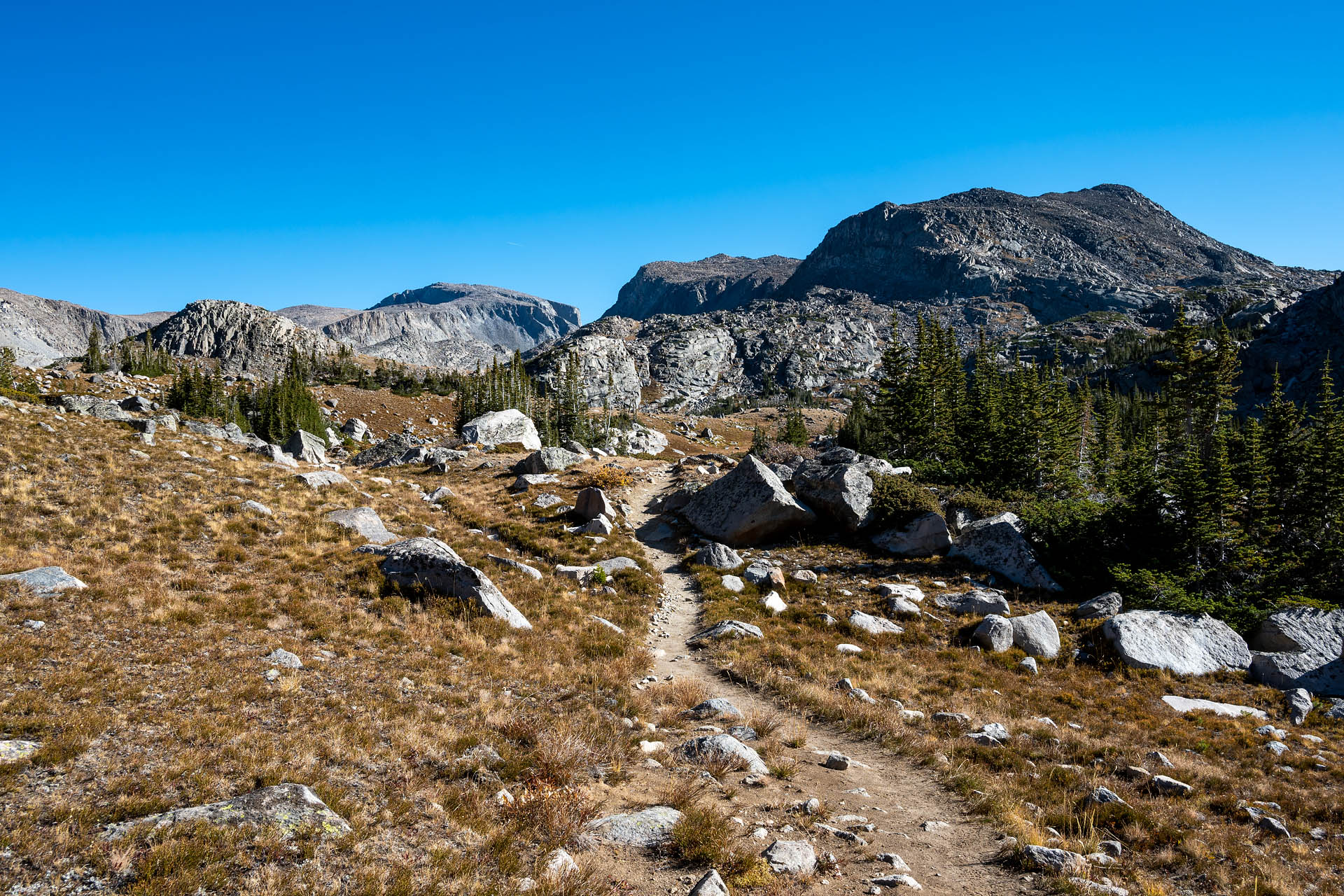 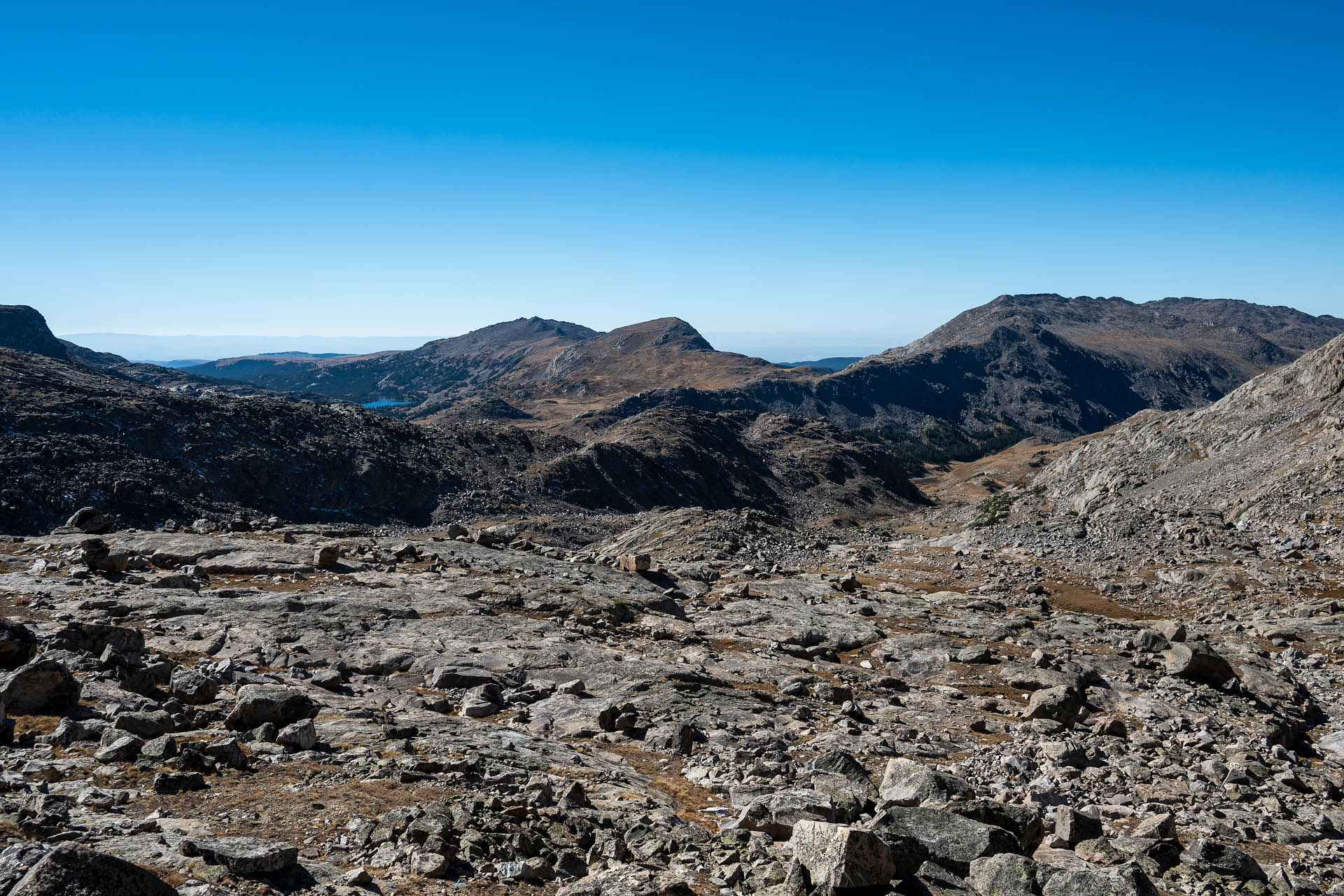 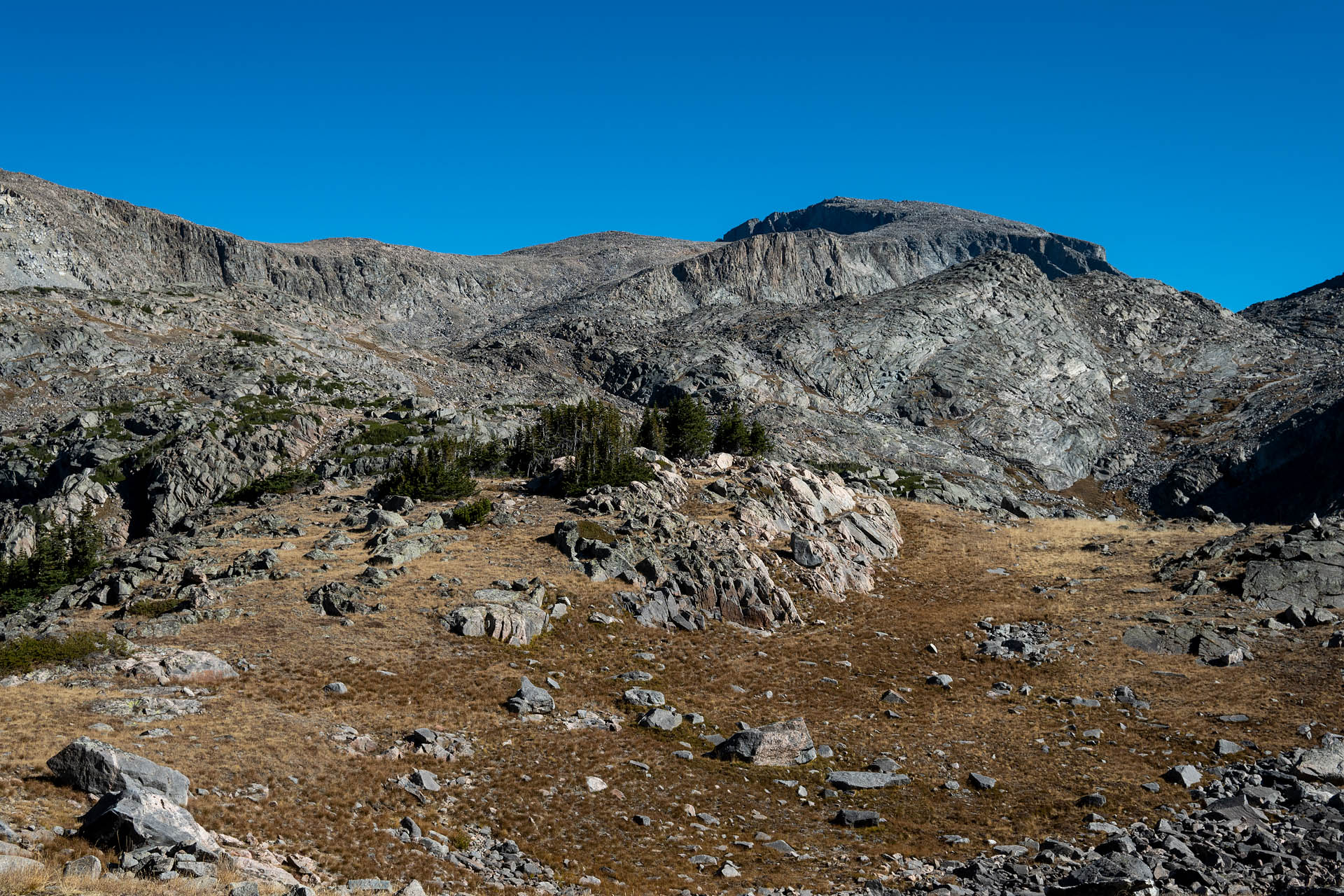 If you’re game to push yourself on a single-day hike in the Bighorns, Cloud Peak is unexpectedly one hell of a challenge. As we researched the trail, one AllTrails report we read summed up the single-day thru hike in a single word: sufferfest. I don’t think there’s ever been another hike report written that encapsulated a trail with such accuracy and brevity.

We hike a lot. We’re no strangers to 20-mile day hikes with between 4,000 and 6,000 feet of vertical gain. When we’d read reports that this hike was ‘difficult,’ we figured it was probably on par with other long-distance trails. We’d also just spent the summer hiking in the Cascades, where boulder scrambling was very much the norm. However, with a three-mile boulder field stretching between 10,000 and 13,000 feet of elevation – and beginning nearly 9 miles into the hike – this one did finally push us a bit more. While most people hike Cloud Peak as part of a two- or three-day backpacking trip, it can be done in a single day if you’re confident in your abilities.

The trail to Cloud Peak begins at the West Tensleep Lake Trailhead, one of the main points of entry for the Cloud Peak Wilderness Area. West Tensleep is used to access a number of trails, many of them best suited for multi-day backpacking excursions.

The trailhead at West Tensleep Lake is about an hour west of Buffalo and 1.5 hours from our place in Sheridan. The trailhead is about 7.5 miles off the Cloud Peak Scenic Byway (US-16) up Forest Road 27. The road is dirt, but when we drove it was in excellent condition. There are a ton of camping sites along this road, so I imagine the forest service keeps it pretty well graded and maintained.

Don’t forget to register at the trailhead. All day hikers and backpackers entering the Cloud Peak Wilderness Area must fill out a form and carry a copy for the duration of the trip. Failure to register can result in a hefty fine or even jail time.

The route to Cloud Peak follows the Mistymoon Trail (#063) for about seven miles to Mistymoon Lake, where it joins with the Solitude Loop Trail (#038). After following #038 west for about a mile, you make a sharp right turn (north) and head off trail along Paint Rock Creek towards Cloud Peak. The trail here fades in and out for maybe a mile, then it’s about three miles of route-finding to Cloud Peak’s summit. While there are cairns along the way, they are both infrequent and not obvious. Make sure you have a GPS map downloaded as it can be easy to lose your way. Additionally, people have followed various routes through here. Consequently, there’s a haphazard collection of trail markers that’s created even more of a ‘find-your-own-adventure.’

Before setting out, we were warned that the Mistymoon Trail could be a bit crowded. However, crowds in this area pale in comparison to those you’ll find in national parks and more populated hiking areas. Around here, people seem to use the word ‘crowd’ to imply maybe a dozen people. In our 23-mile trip, we only saw one other person on Cloud Peak and three along Mistymoon Lake. It was awesome.

Starting out on the Mistymoon Trail, the route is fairly flat as it skirts the edge of West Tensleep Lake. From here, it rises and falls gently as it comes into and out of areas of forests and sweeping meadows. After about five miles, the trail passes along the western shores of Lake Helen. The morning sun was still fairly low, and the light on the lake and surrounding peaks was just beautiful. The lake itself was still and mirror-like, offering a gorgeous reflection of the wilderness and even the distant summit of Cloud Peak.

From here, the trail continues to pass through alpine meadows and around the shores of the other chain lakes. About a mile from Lake Helen, the path hugs the edge of Lake Marion. After another mile, it reaches Mistymoon Lake. Akin to Lake Helen, Mistymoon’s deep sapphire hue is striking against the otherwise stark terrain. Northeast of the lake, you can make out the adjacent summits of Bomber Mountain (12,841’) and Cloud Peak (13,167’).

We made decent time out to Mistymoon, arriving at the lake in about two and a half hours. From here, we joined the Solitude Loop Trail toward Paint Rock Creek Waterfall, then headed off-trail on a semi-discernible path. We dropped down a small hill, losing about 400 feet in a half mile, and knew immediately we were going to hate that little climb around mile fifteen on the return trip. 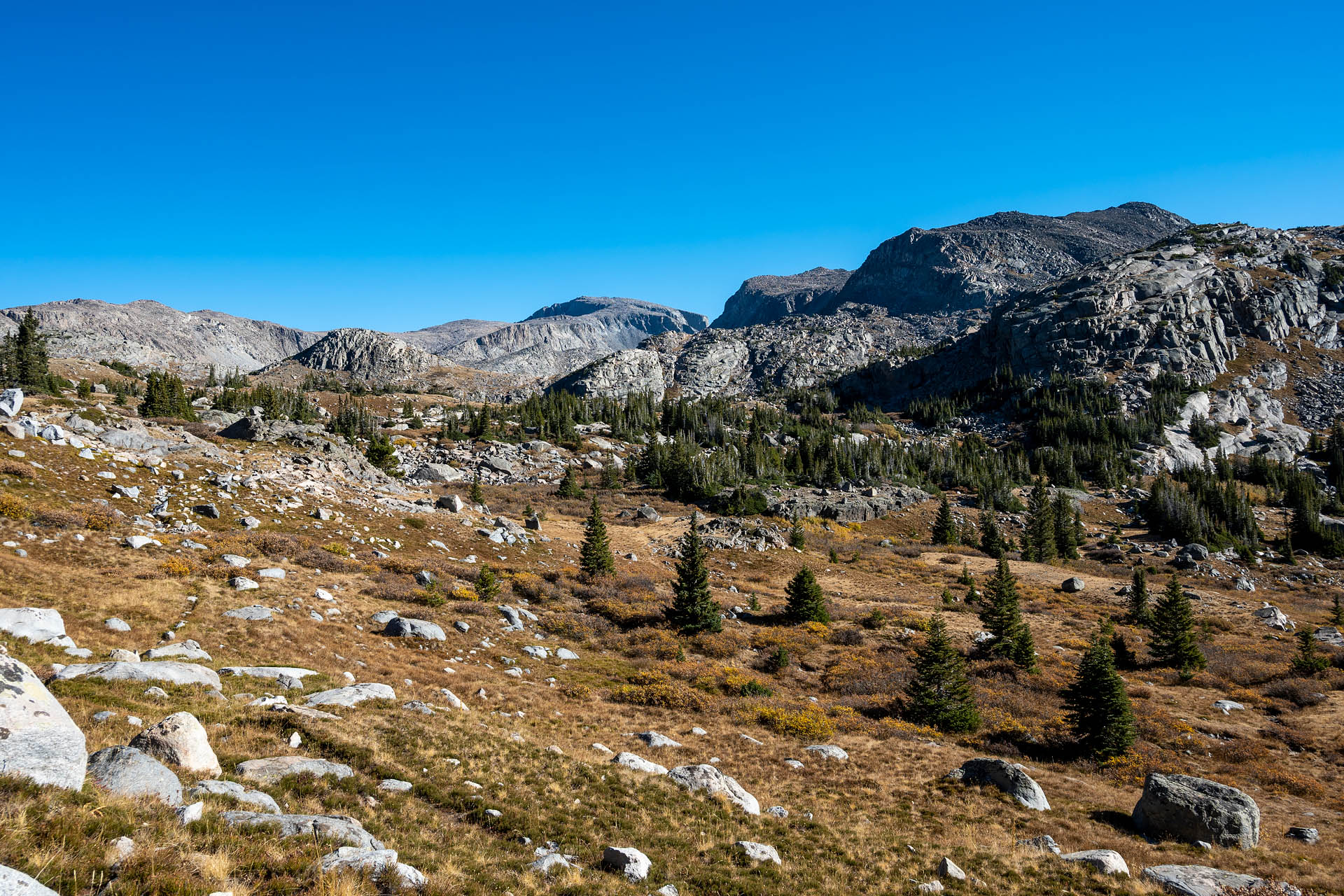 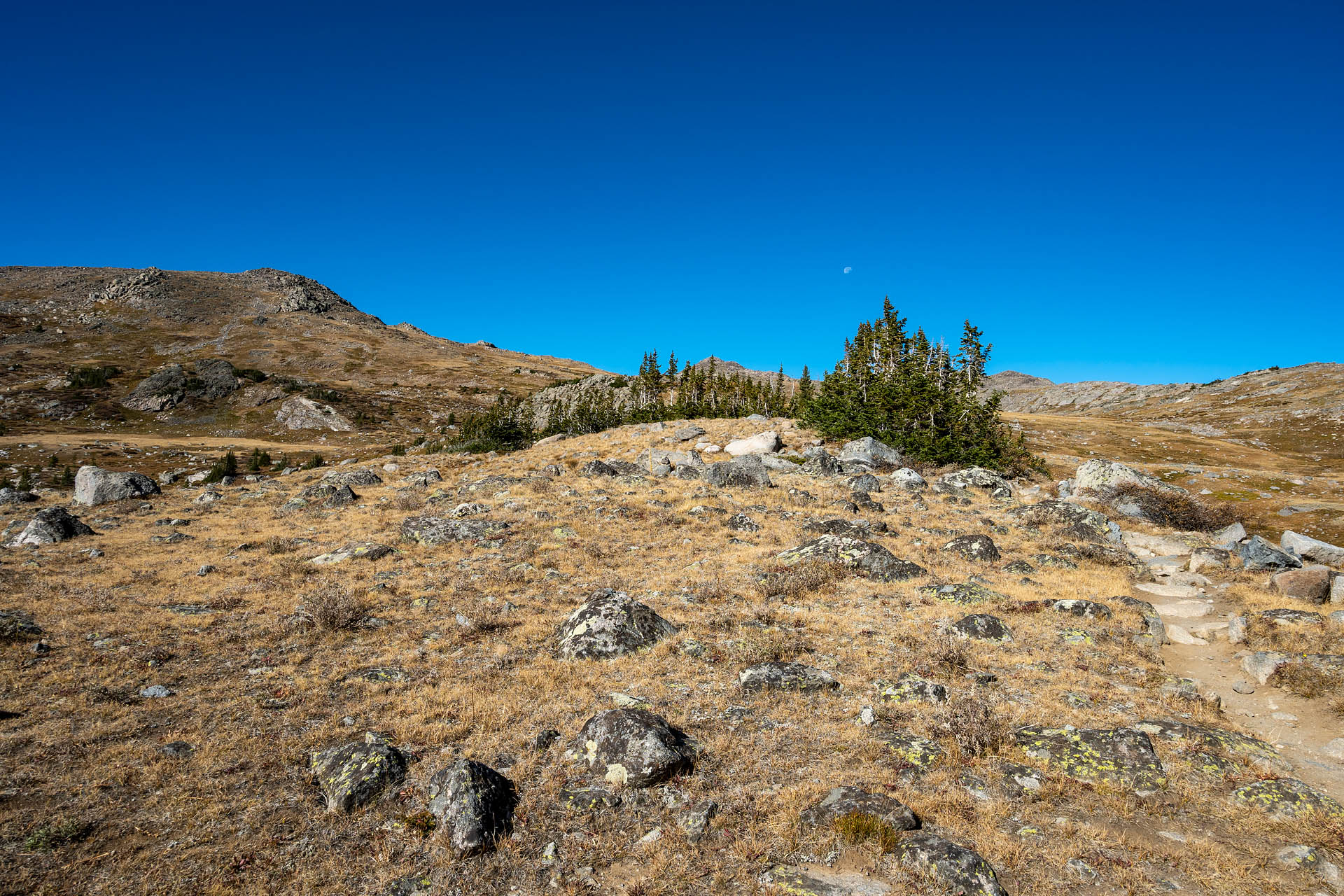 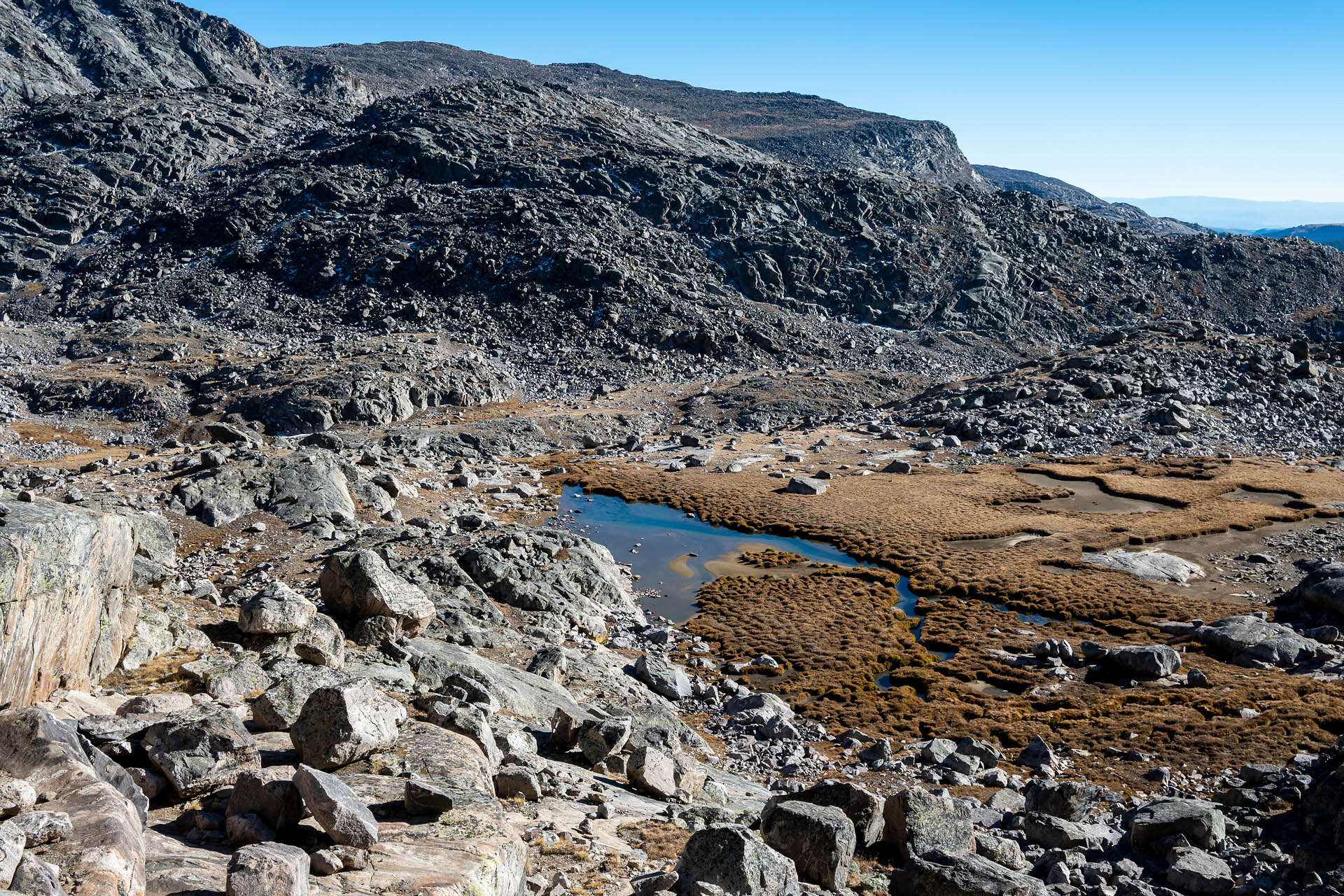 After traversing the Paint Rock Creek drainage for about a mile, the trail disappears – save for the aforementioned, largely useless cairns. The best option here is to follow the wash up to the saddle. On the trip up, we noticed some cairns slightly further east and inadvertently followed those. Consequently, we gained a ridgeline and some scrambling sooner than expected. It wasn’t a huge deal, but it did slow us down a bit (we rectified our misstep on the way down). 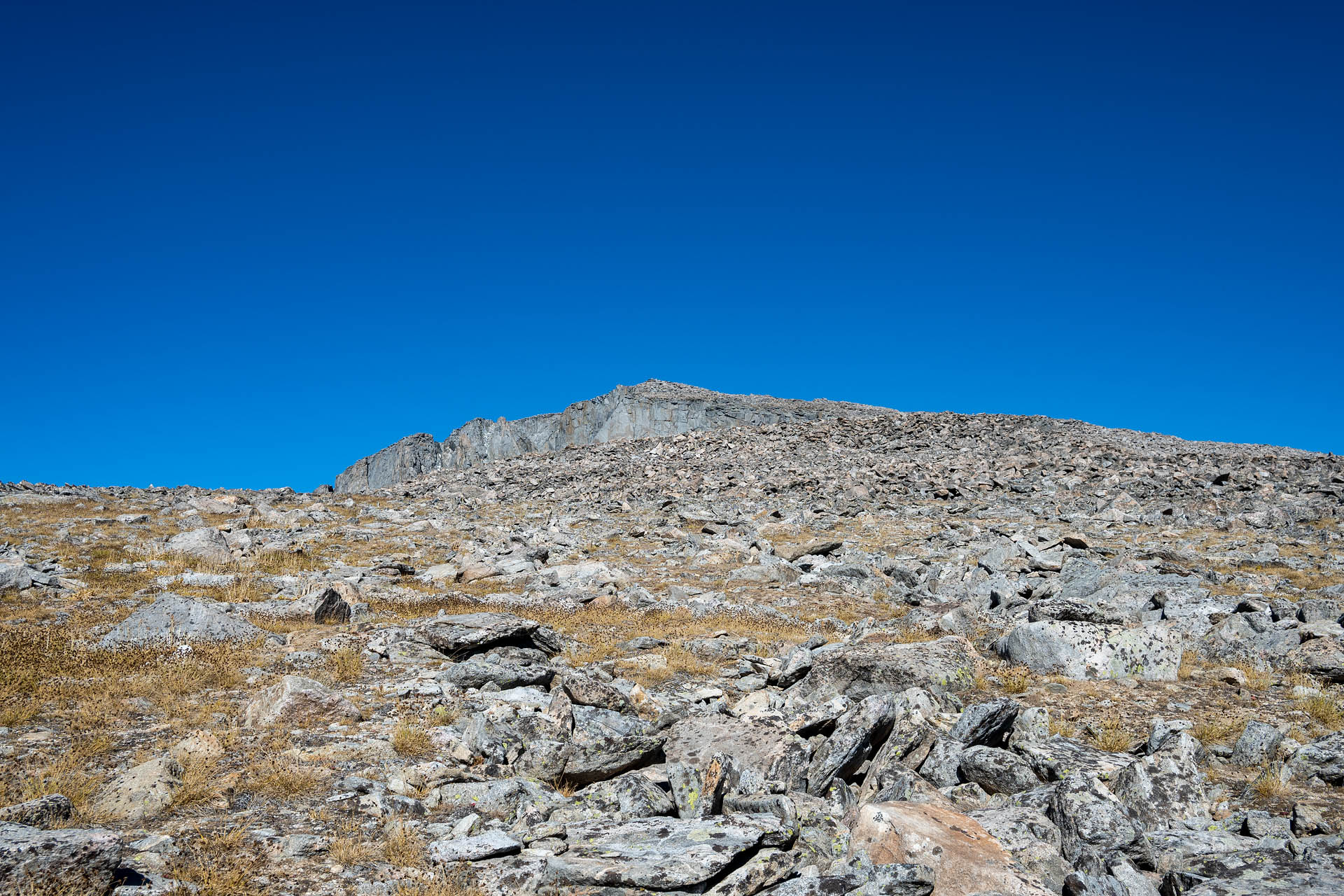 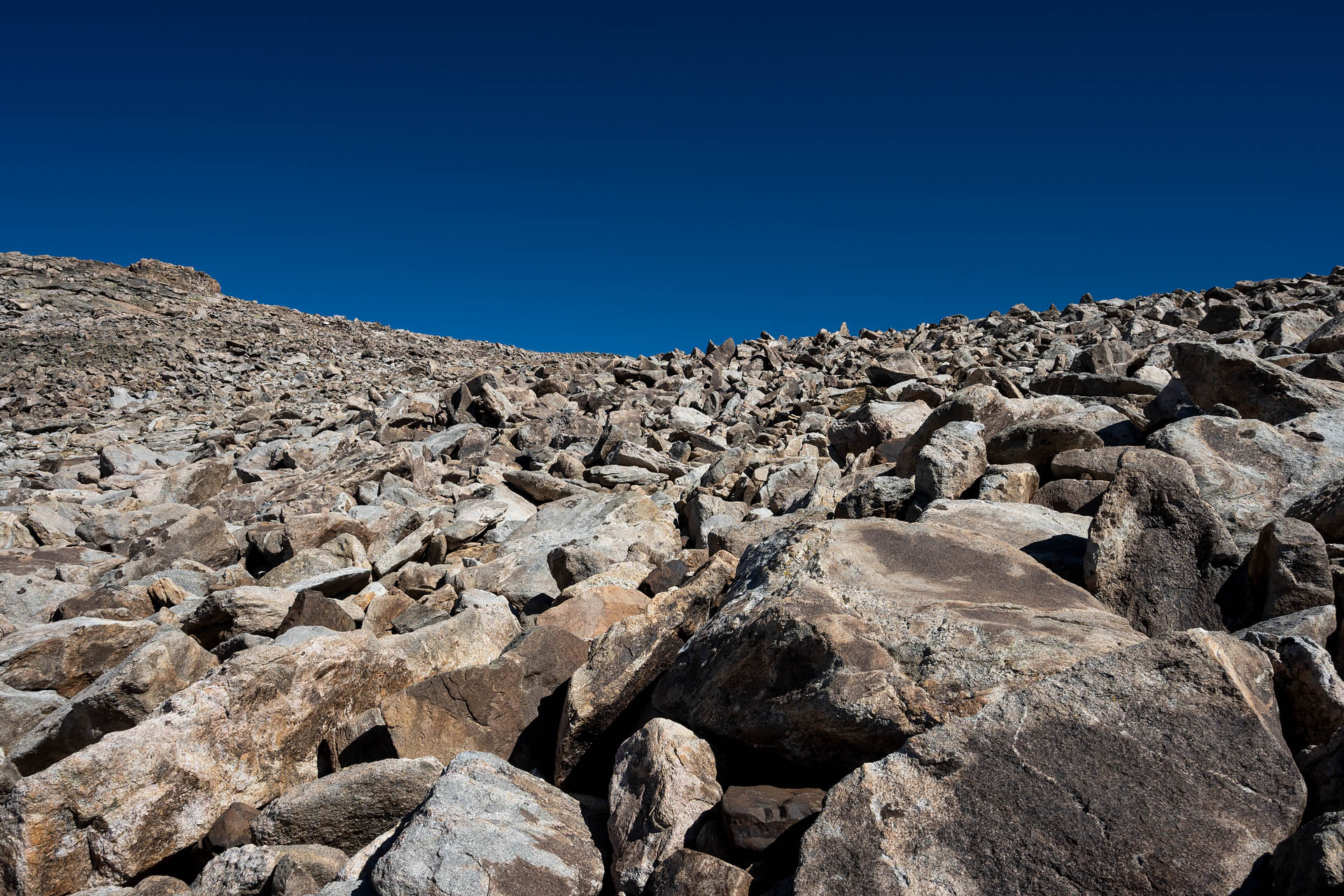 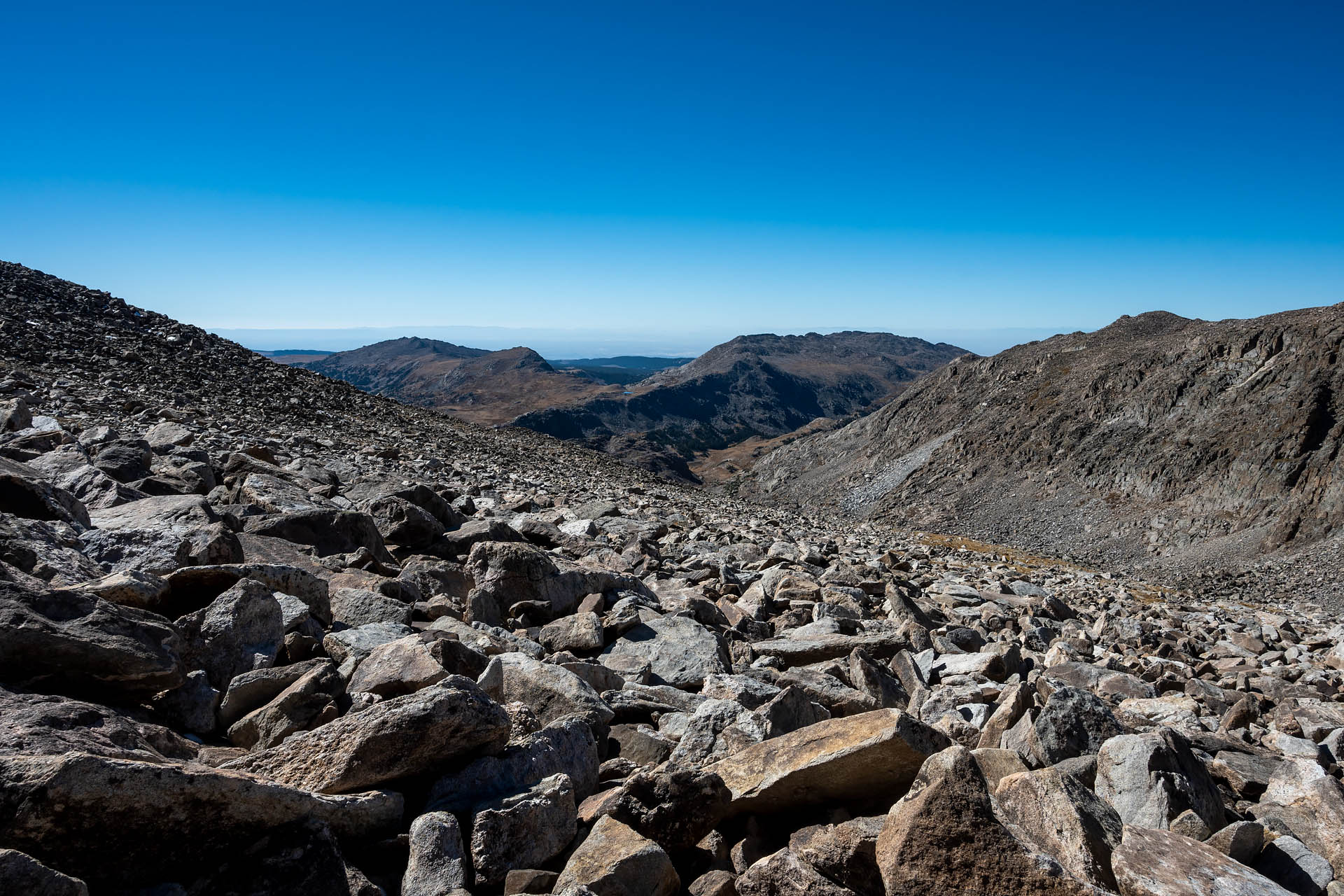 From Mistymoon Lake it’s just under 5 miles to the summit. It took us 3.5 hours. We were stunned. While we were prepared for some decent bouldering, that three-mile boulder field to the summit is no joke. The terrain here is seriously rugged: Almost two miles of the scramble is over boulders the size of small cars, and the elevation ranges between 10,000 and 13,000 feet. The vertical gain is about 3,400 feet in the last 3.4 miles to the summit, with the last half mile to the top gaining roughly 1,200 vertical feet. We rarely say this, but there were several times over that last half mile where we felt like we may never get there. 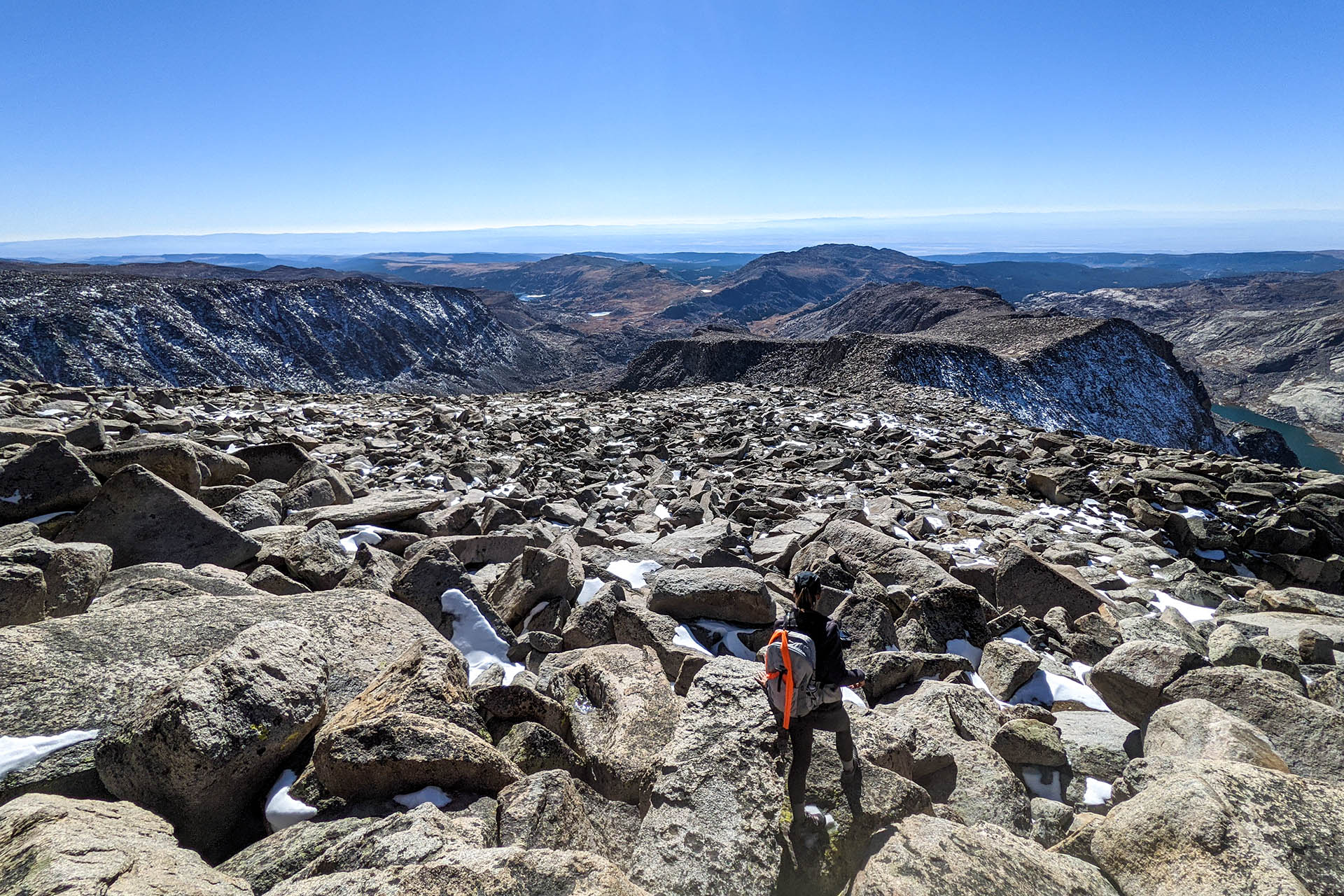 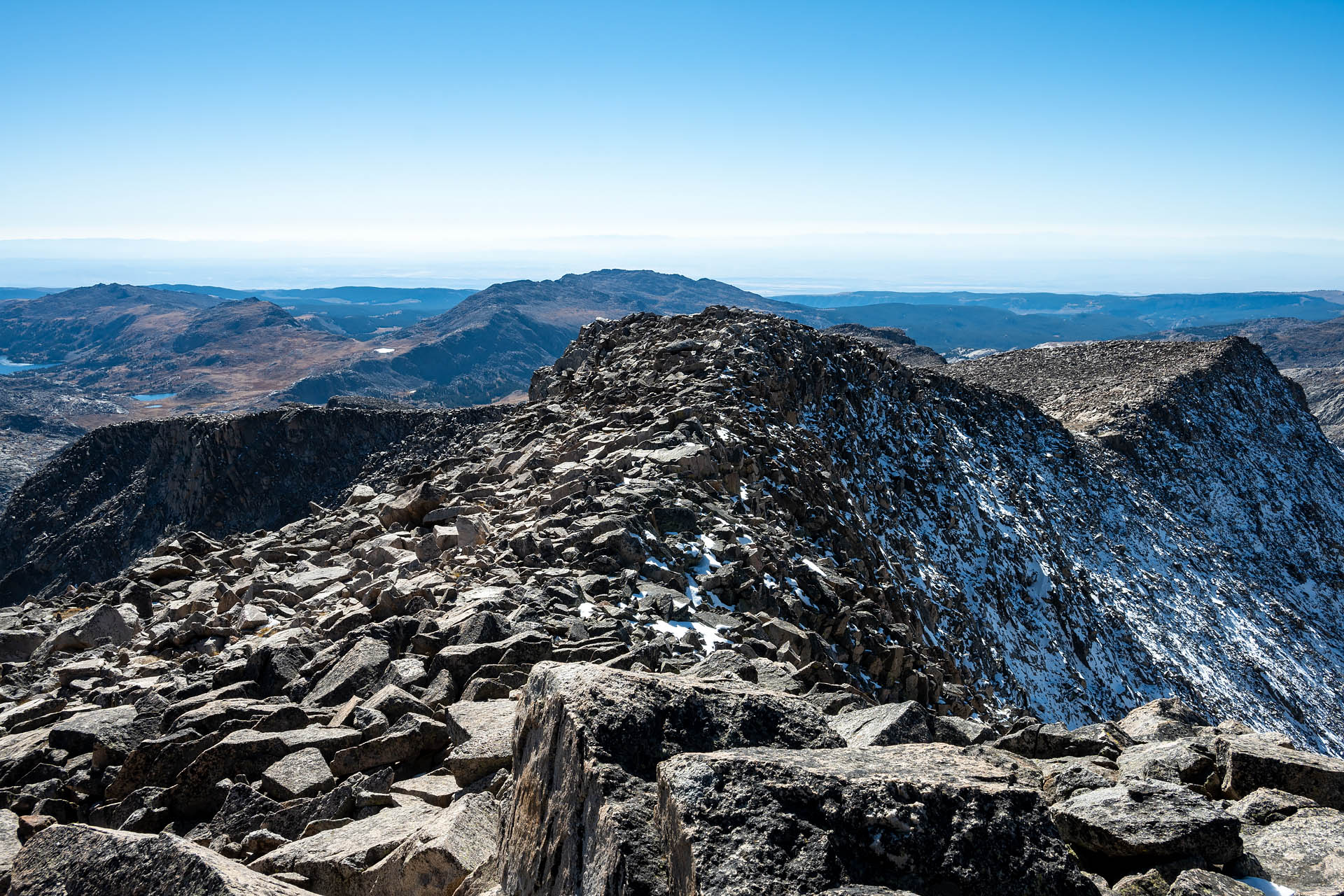 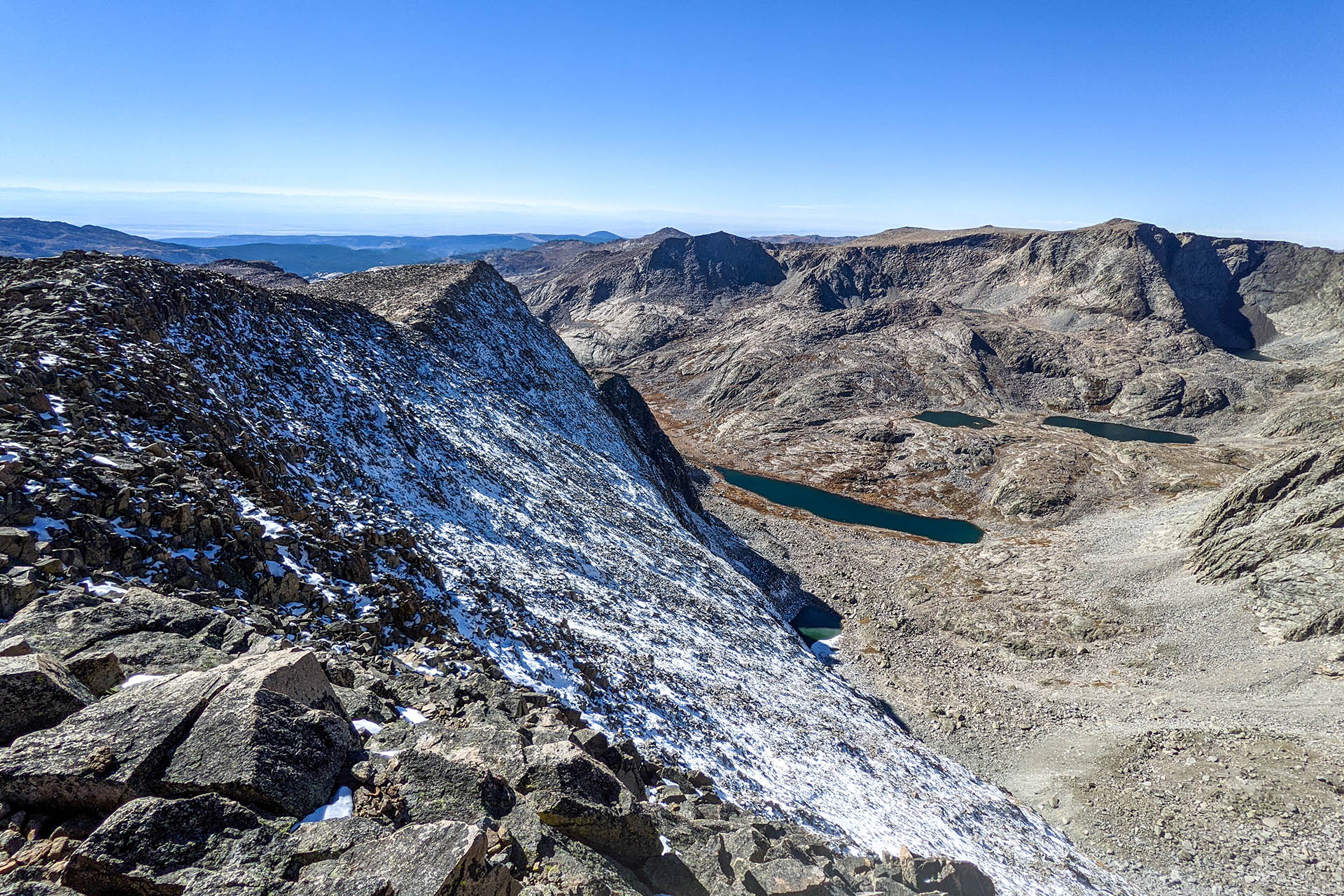 Pay careful attention when navigating the boulder field. While the saddle is plenty wide enough, the cliffs on either side are seriously sharp and can be somewhat obscured by the huge boulders. Most people refer to the saddle as ‘The Narrows,’ though it is actually about twenty yards wide. If you’re bothered by heights, it shouldn’t be too bad as long as you stay in the middle.

When we finally reached Cloud Peak’s 13,167-foot highpoint, the views were a real treat – in part, just for the serious effort it took to get up there. While the summit is spacious, the edges are ridiculously sheer. Peering over the northeast face of the mountain, there are dizzying views down on two-toned Glacier Lake. The lake is fed by adjacent Cloud Peak Glacier, the last remaining glacier in the Bighorns. To the west are views of the jagged summits of Black Tooth Mountain and Mt. Woolsey. We were pumped to have reached the top, although it was kind of a fleeting moment of satisfaction… we were quickly reminded that we still had to downclimb all the s—t we’d just tackled. 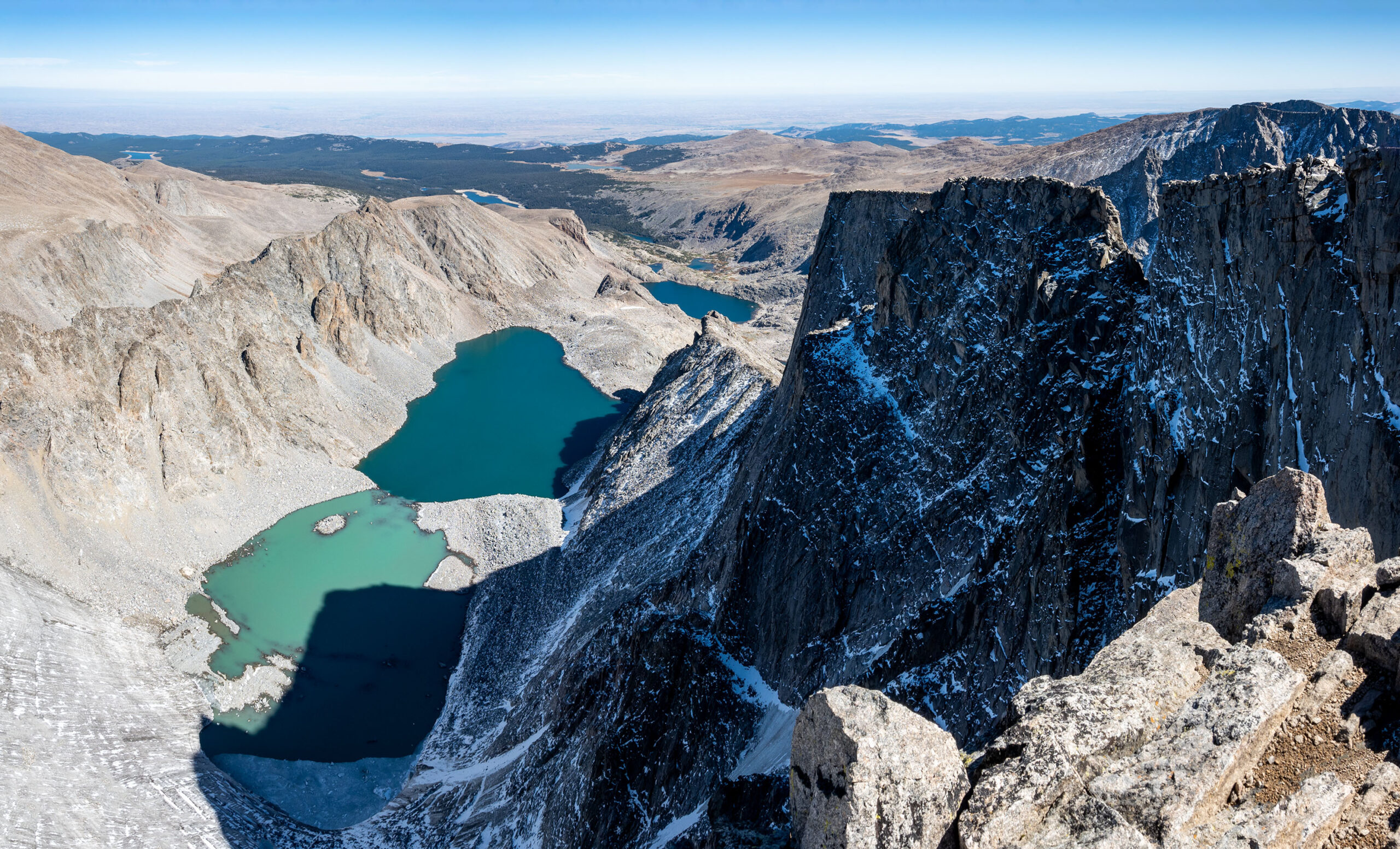 Although our knees were feeling it, the return down the boulder field wasn’t too bad, and we managed to cut about thirty minutes off our descent time. Of course, on numerous occasions one of us would drop the f-bomb and proclaim that we never wanted to see another rock of any size ever again. Two weeks later, I think Stephan still feels that way. 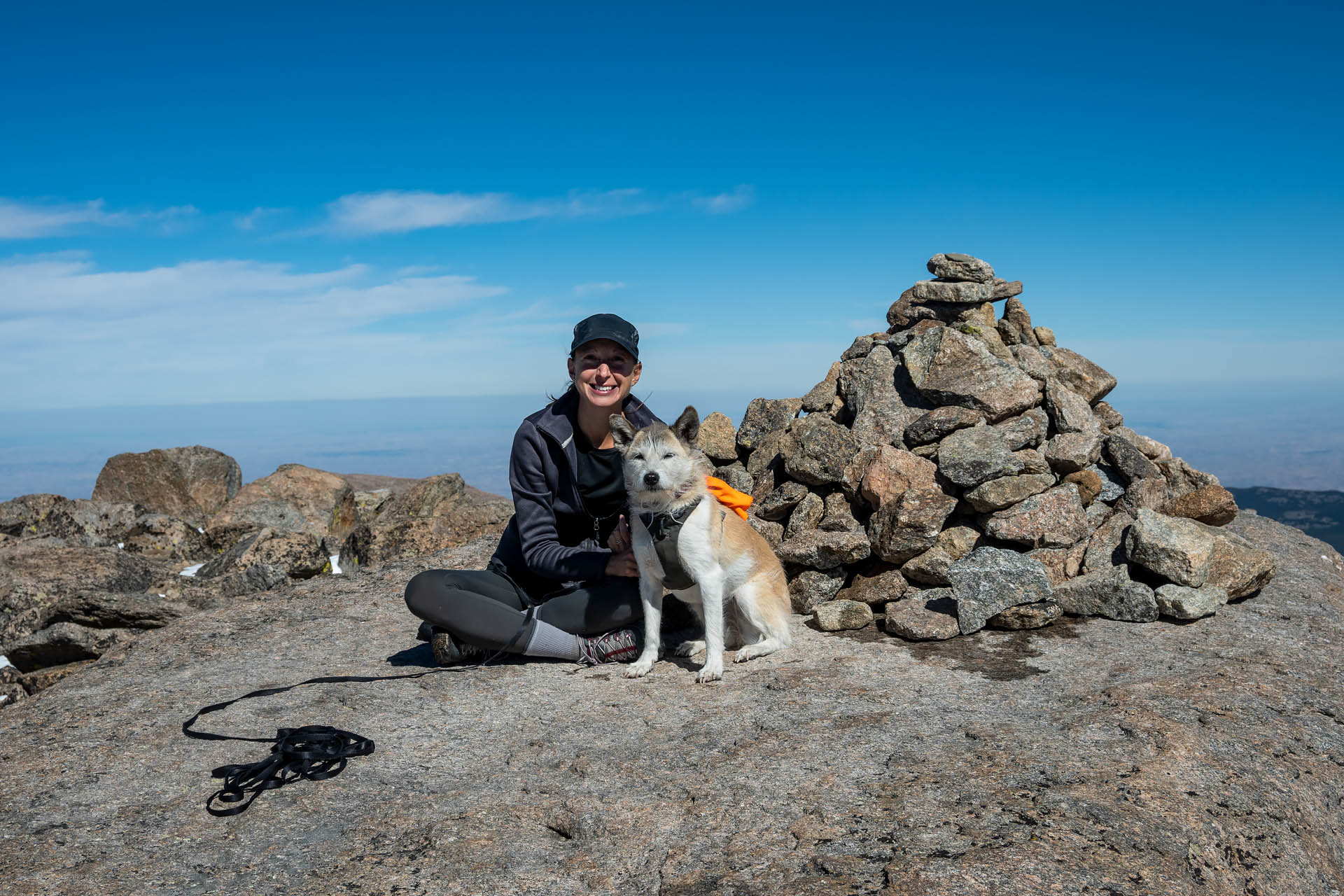 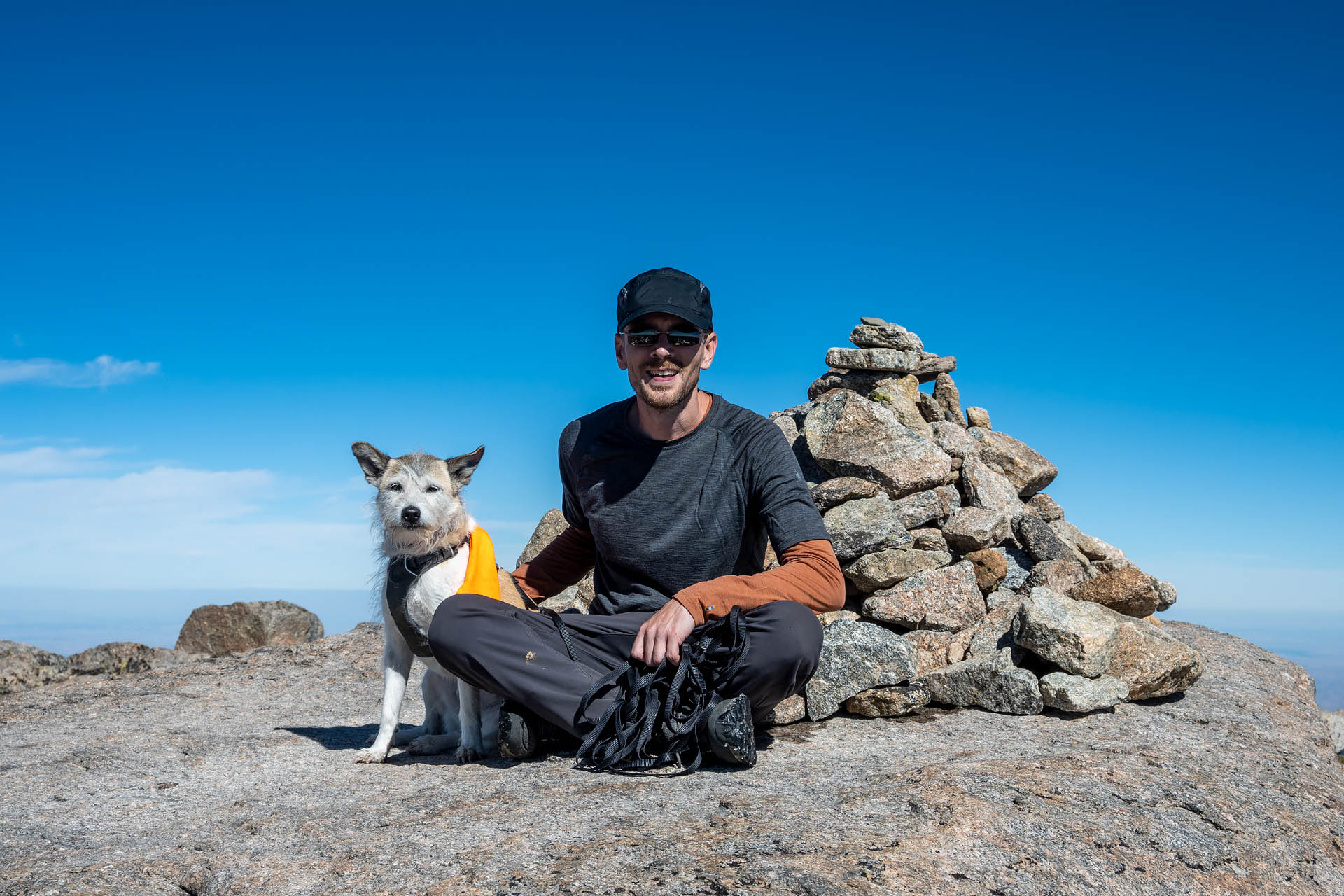 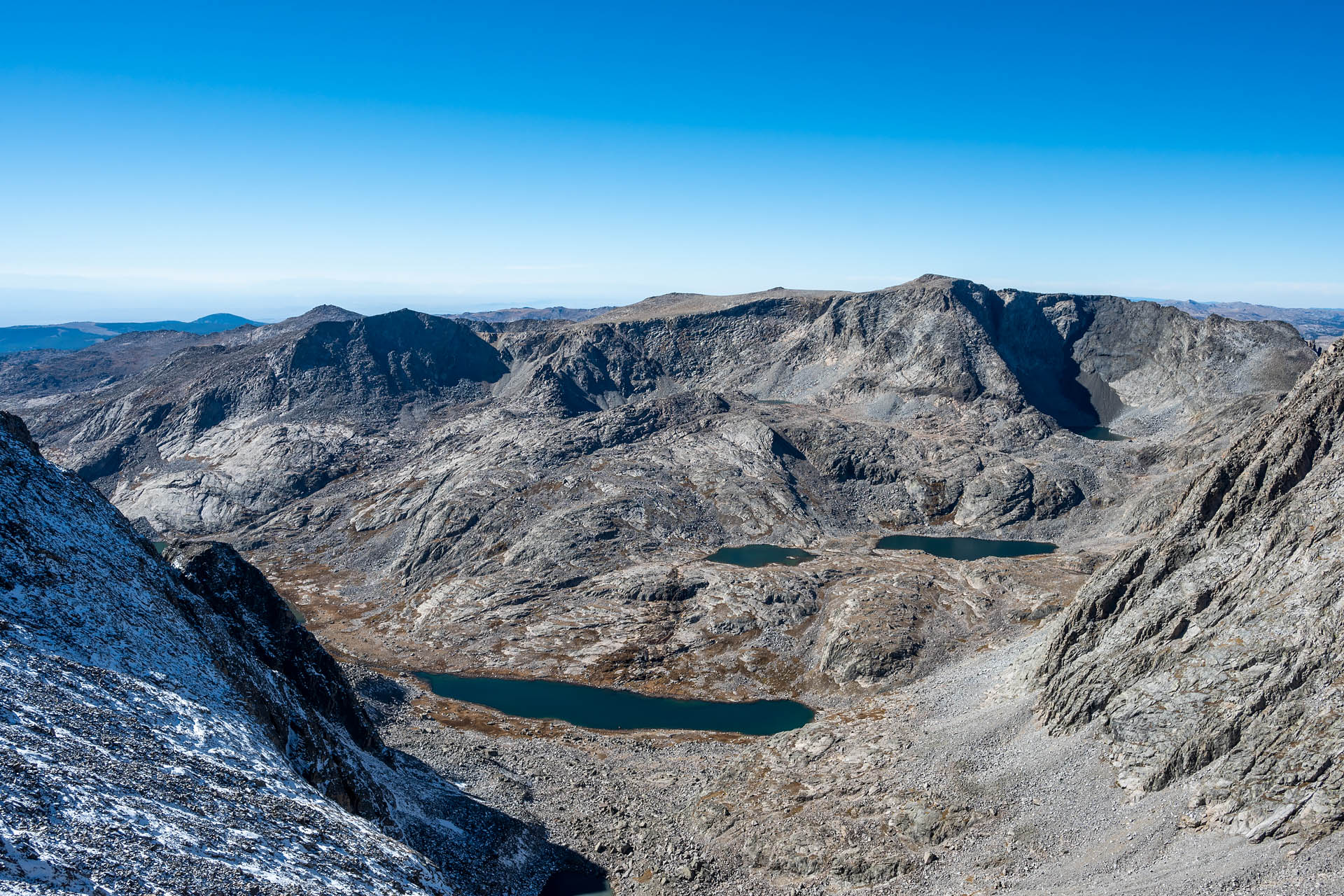 When we finally regained an actual trail, it kind of felt like winning the lottery. Even with eight miles left to go, the ease in terrain almost felt like walking on a cloud… almost. As the sun sank lower in the sky, we were again treated to some nice directional light on the lakes. The wildlife was also now out enjoying the twilight, and we managed to spot an enormous porcupine, some type of grouse, and a handful of deer and elk. It was cold and we were tired, but it was so peaceful. 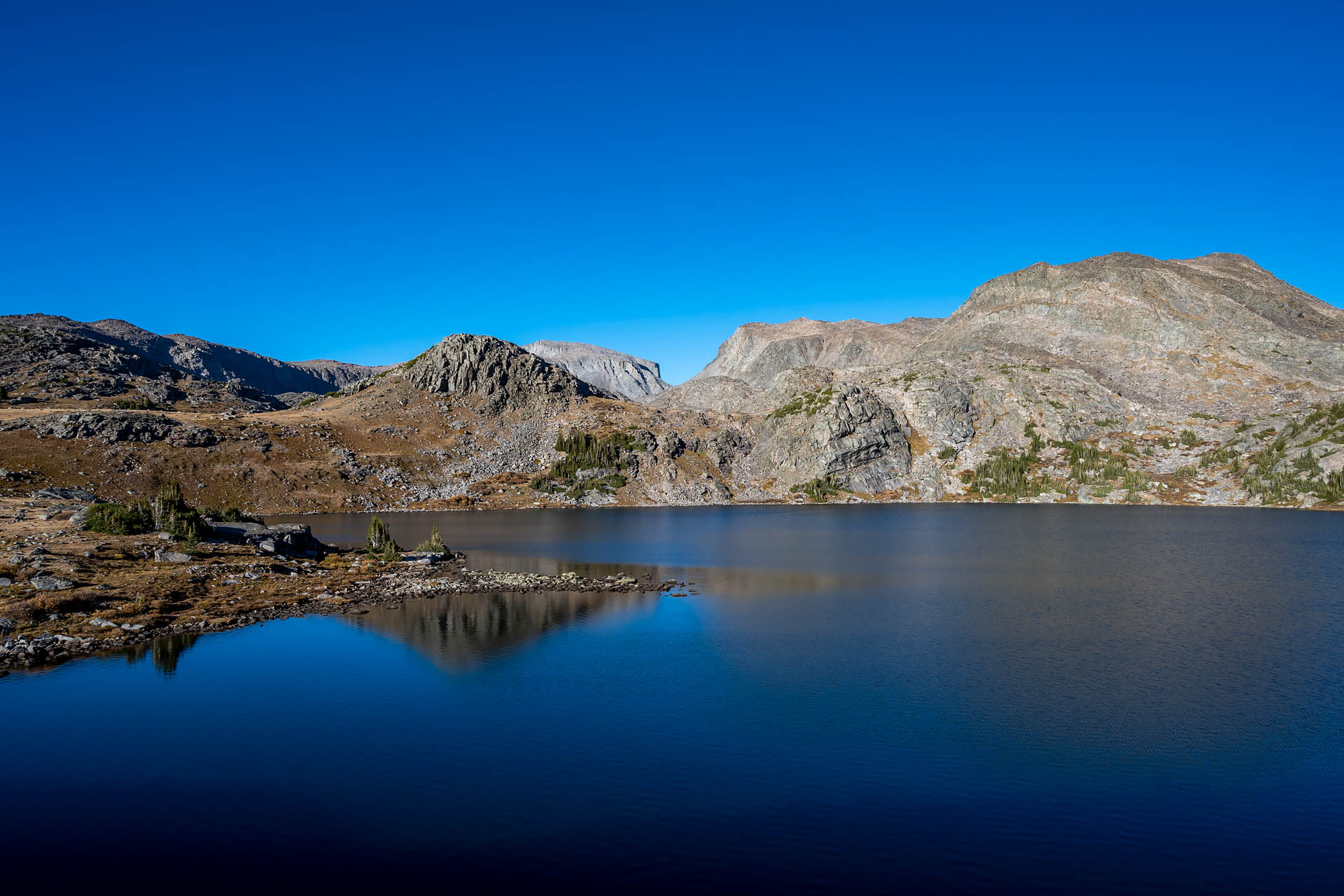 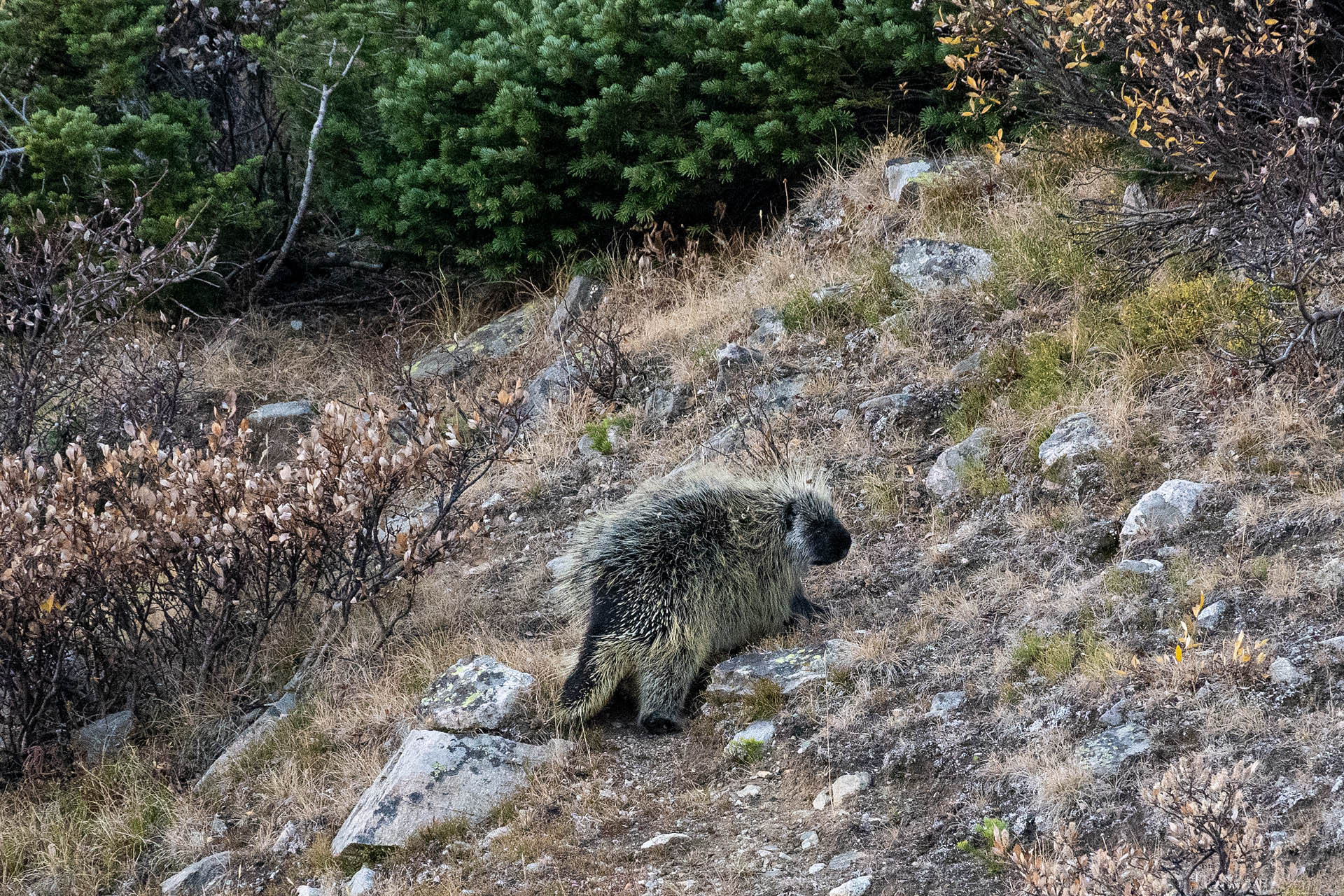 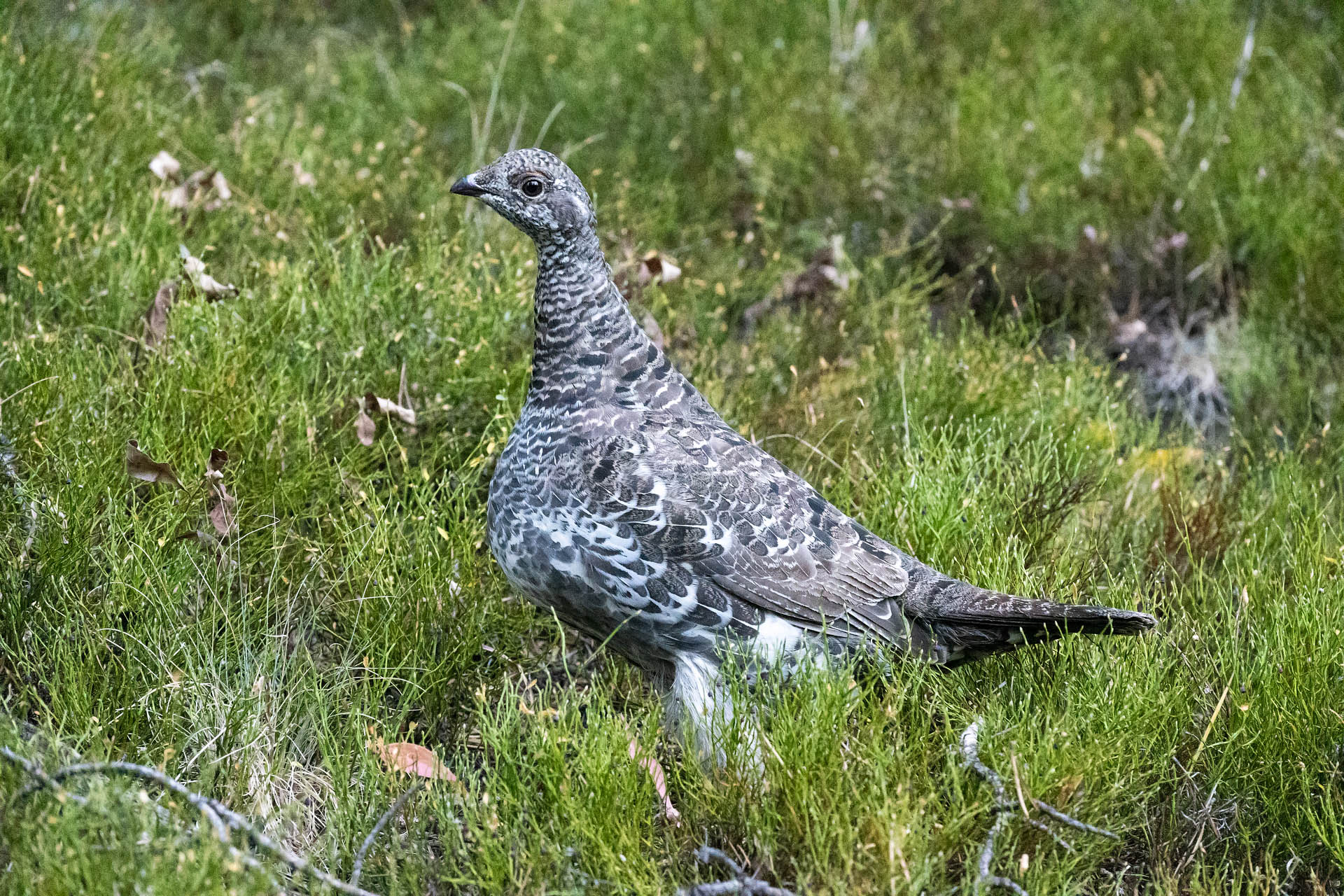 We spent the last couple miles to the trailhead illuminating the dark forest with our flashlights. Had we started out a half hour earlier, we would have avoided the chill of nightfall. However, with the increasingly short end-of-September days and exactly twelve hours of daylight, we knew we’d be cutting it close. Even with a finish in the dark, though, it was a solid day on the trail. 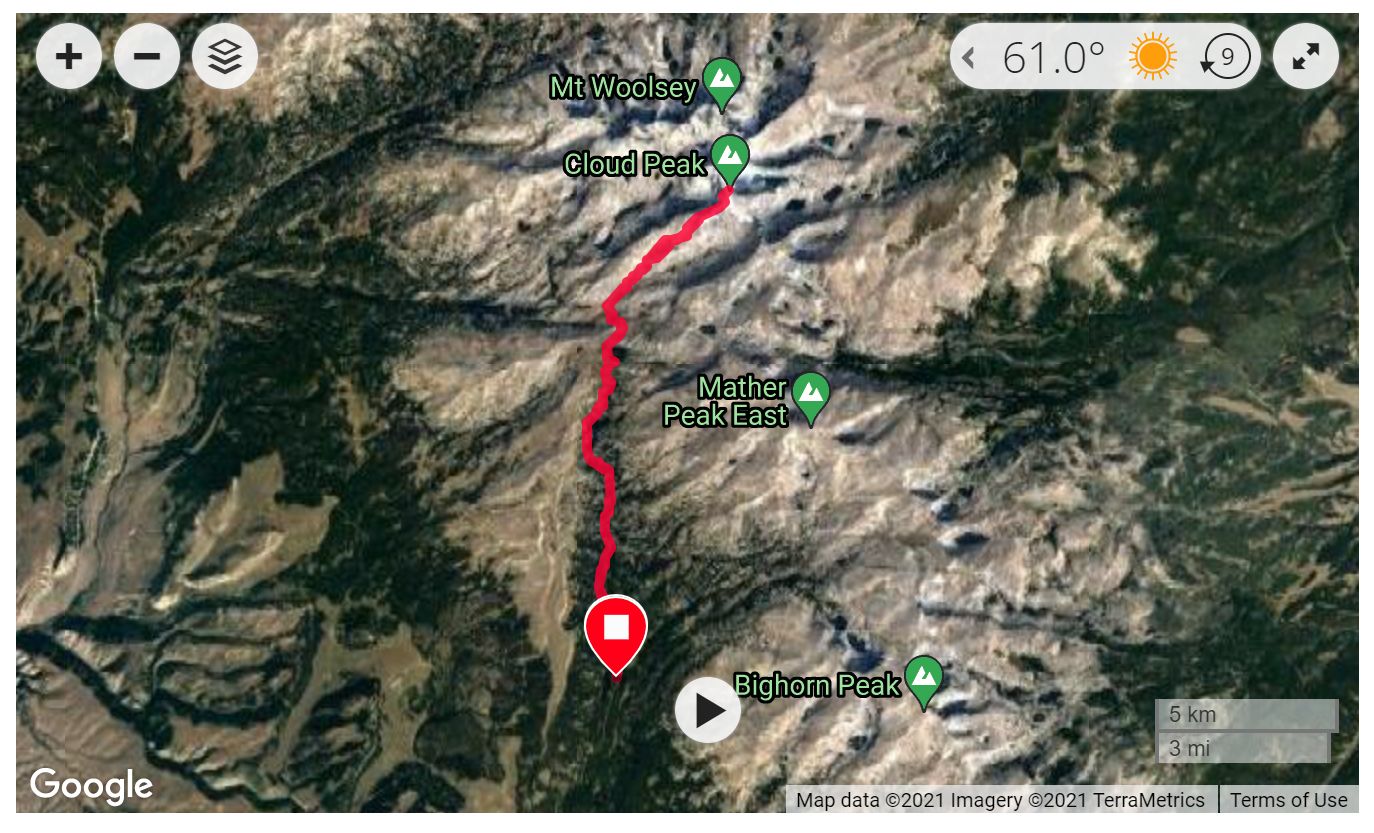 If you aren’t looking to endure the massive boulder field to Cloud Peak’s summit, there are some beautiful spots along the way that would make for a nice out-and-back hike:

If you’re up for an adventure similar in scale to Cloud Peak, Bomber Mountain can also be reached from Florence Lake via an unofficial trail (do your research before heading out on this hike). Hopefully, we’ll be back someday when there’s not three feet of fresh snow to tackle this one.