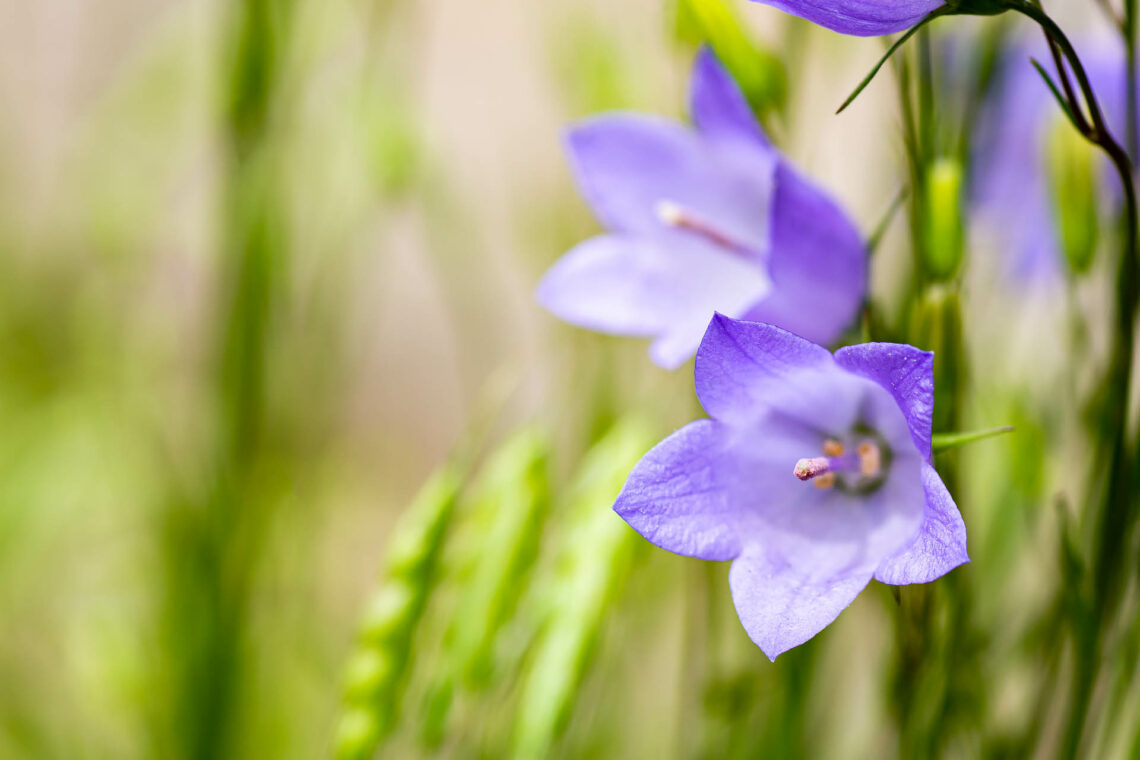 While it wasn’t initially one of the summit hikes on our radar, we ended up hiking Columbia Mountain our second weekend in Montana. It was the last weekend in June, and many of the higher elevation trails we’d marked as our ‘must-dos’ were still impassible with snow and ice. Aside from being free from snow cover, part of this hike’s appeal was its location – a short, 20-minute drive (13 miles) from downtown Whitefish.

Just east of Columbia Falls, Columbia Mountain soars over the Flathead Valley at 7,234 ft. The mountain is the northern terminus of the Swan Range, and can be climbed as a day hike (out-and-back) or used as the starting point for a multi-day hike. The Columbia Mountain Trail (#51) connects to the beginning of Alpine Trail #7 just below the summit. The Alpine Trail is a multi-use trail that traverses some 55 miles of the Swan Range, running along a high ridge from Columbia Mountain south to Inspiration Point (note: the Alpine Trail can be accessed from a number of trails spanning the range). The trailhead is easily accessible, with a large parking area near the northern end of Berne Road, just off highway 2.

We hit the trail around 8:30 a.m., expecting to find at least a moderate number of people out for a hike on a pleasant Saturday morning. Rather, we were stunned to find ourselves alone on the trail until about a half mile from the summit, when we finally ran into one other group of three hikers.

The trail up Columbia is fairly steep, gaining just over 5,000 feet of elevation. Beginning at an elevation of around 3,000 feet, the trail immediately begins climbing through the forest. After gaining nearly 1,000 feet in the first mile, about a third of that is lost, as the trail abruptly drops ~300 feet. After this short descent, the trail again rises quickly, continuing to climb steadily for the remaining ~4 miles to the summit.

Much of Columbia’s trail is forested, with beautiful wildflowers dotting the landscape all the way to the summit. After climbing above the tree line, we watched as the colorful flora abruptly transitioned from blossoms associated with lower-elevation forests (wild roses and asters) to the heartier blooms of wind-swept alpine slopes (yellow columbine, clematis, and larkspur). It seems that with each new trail we explore in the area, comes a host of new wildflowers to examine (I discovered a minor obsession with photographing the harebell). 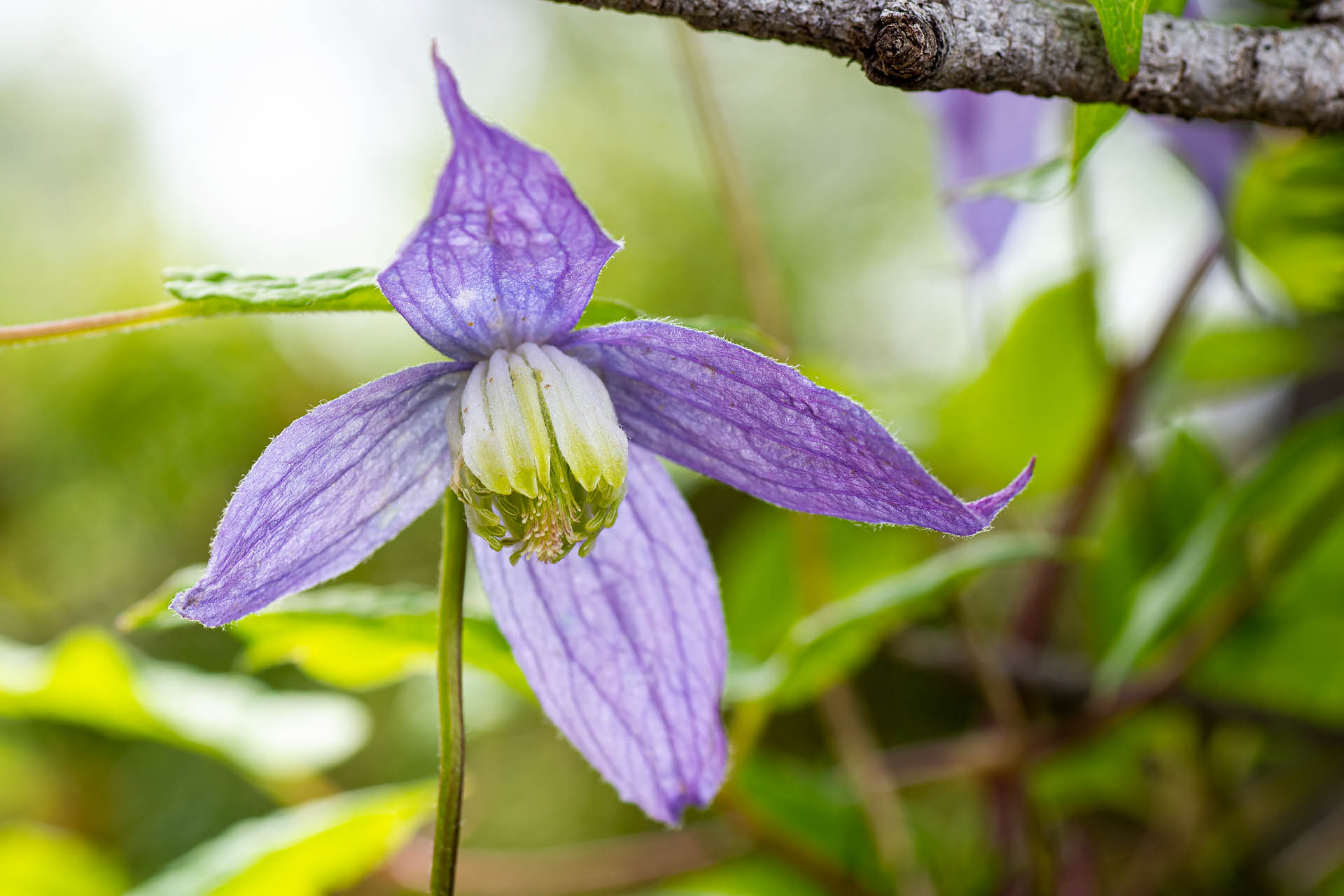 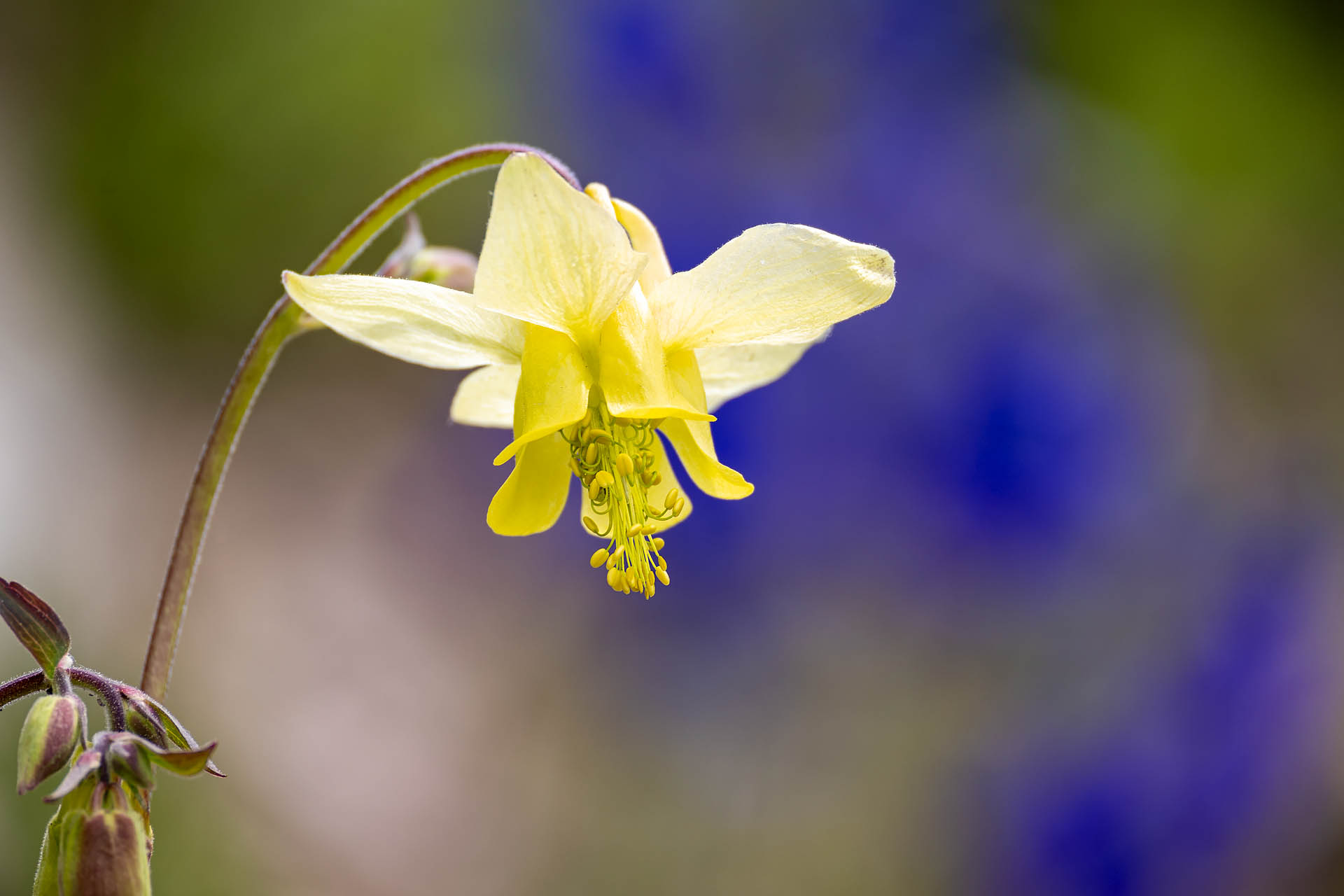 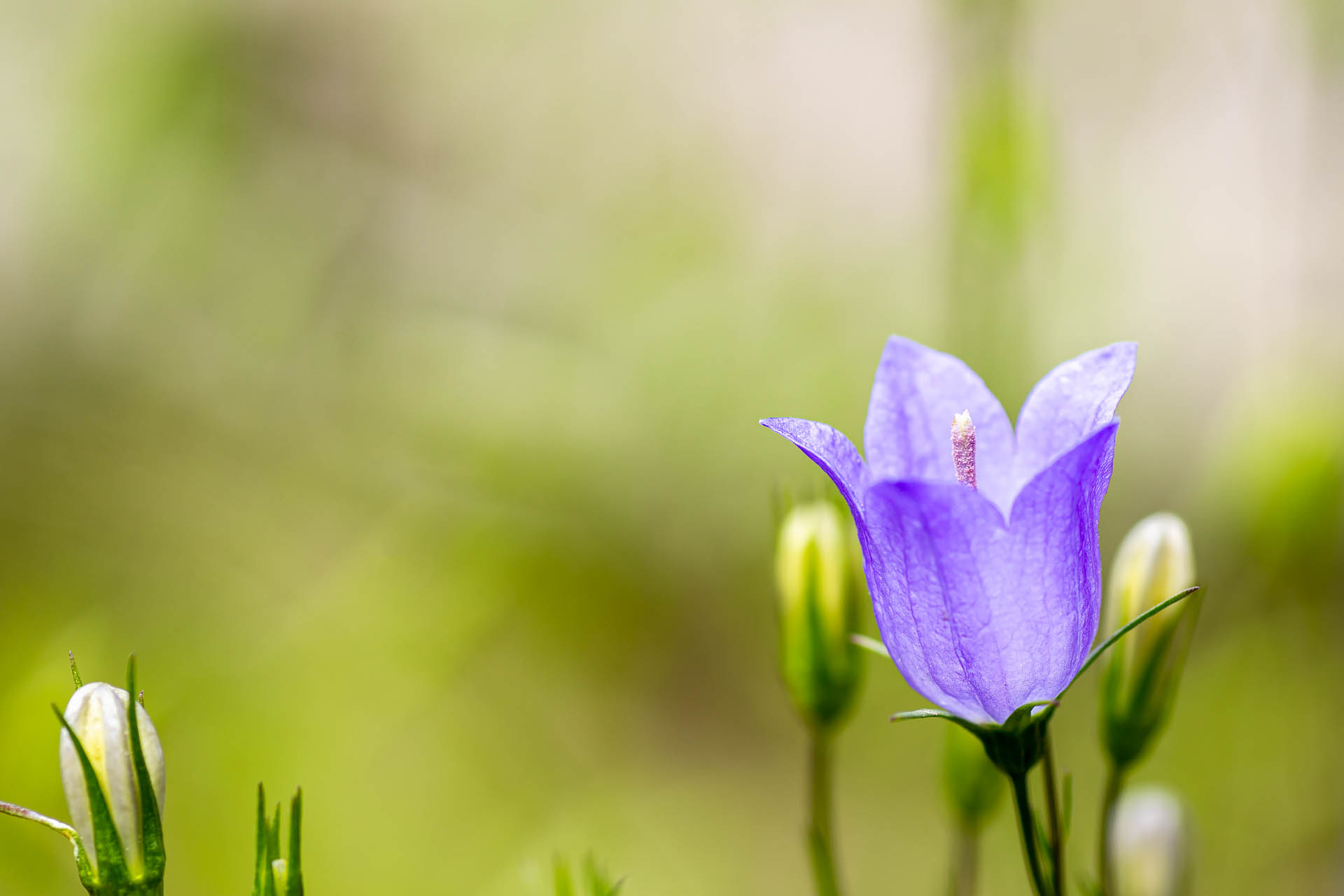 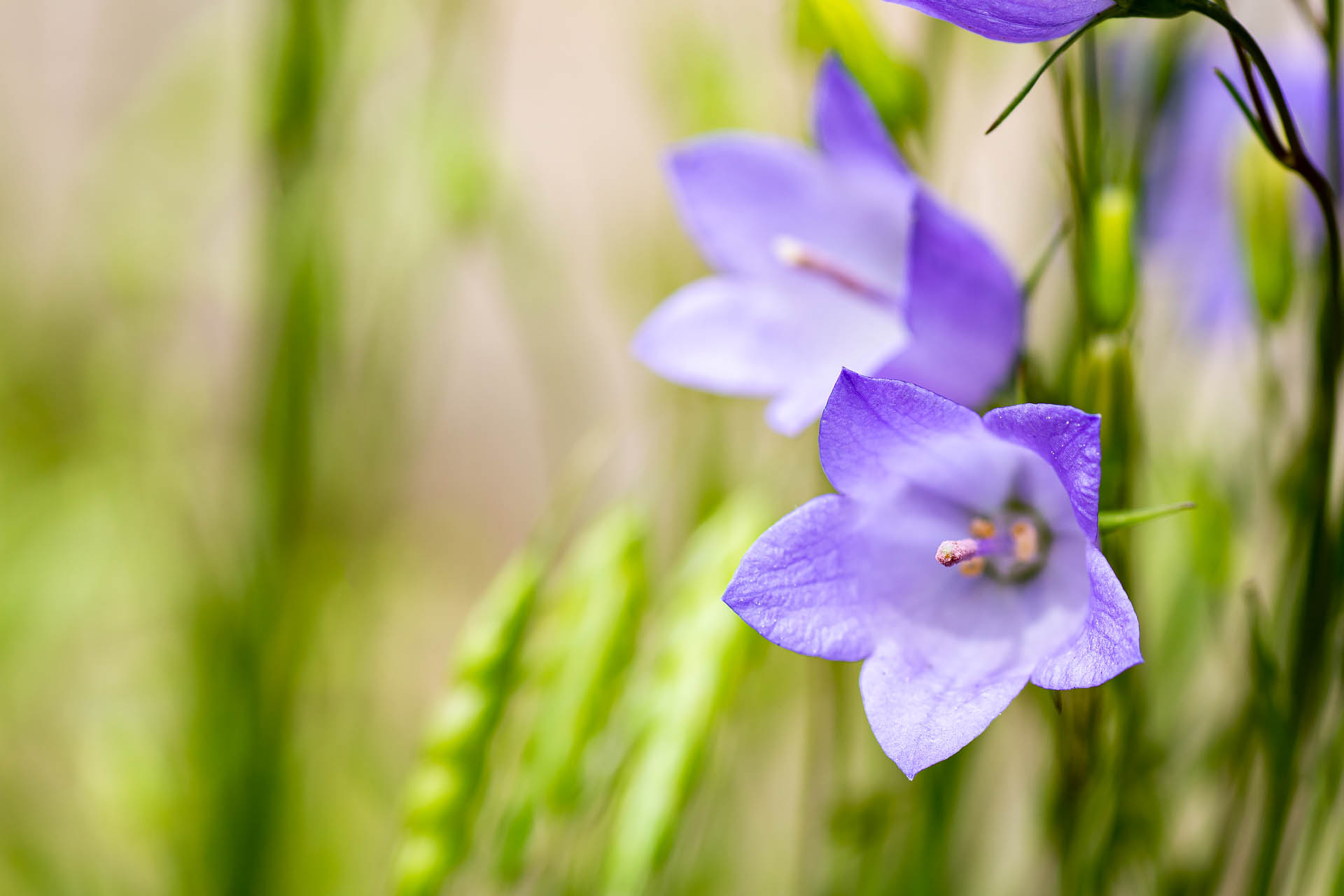 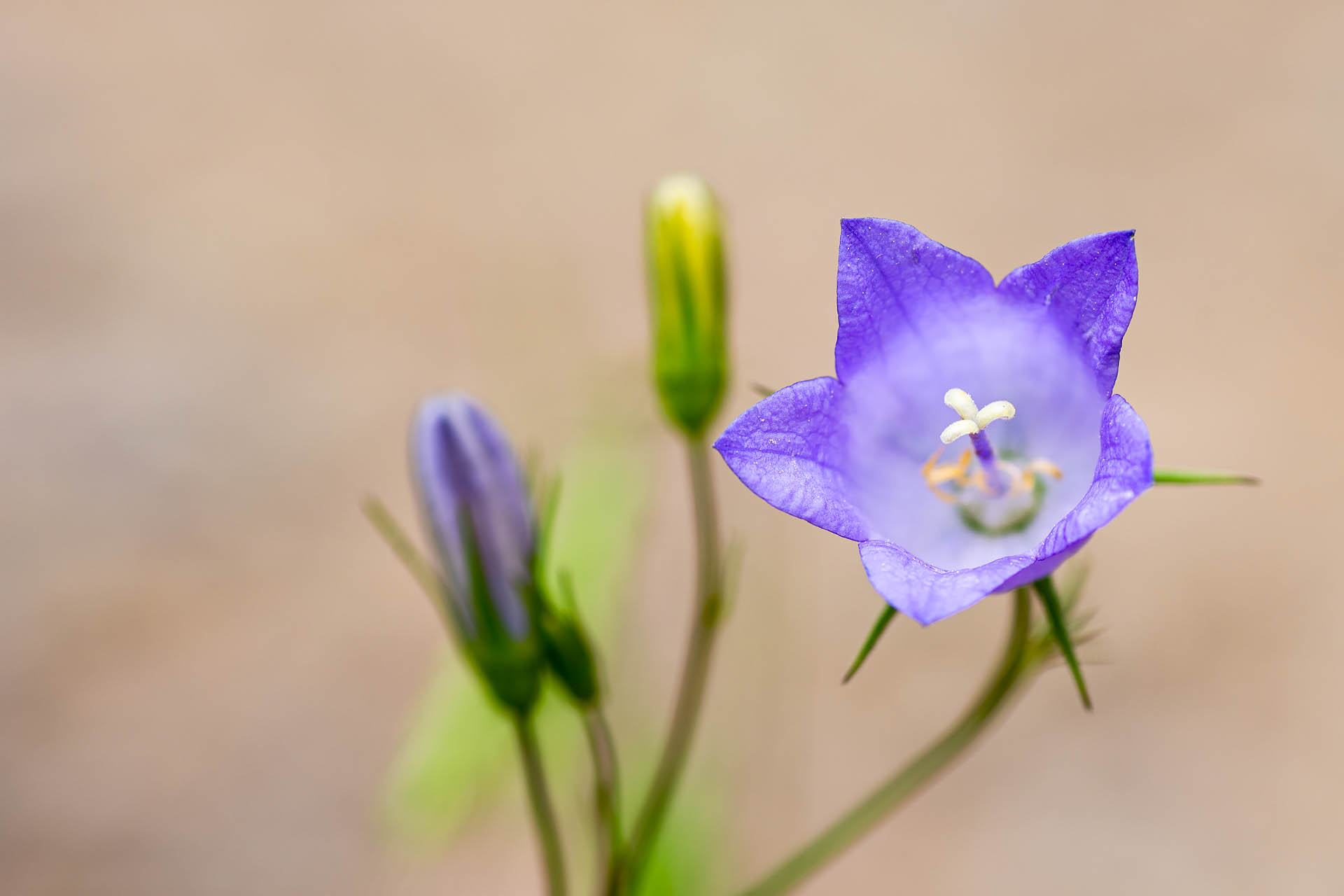 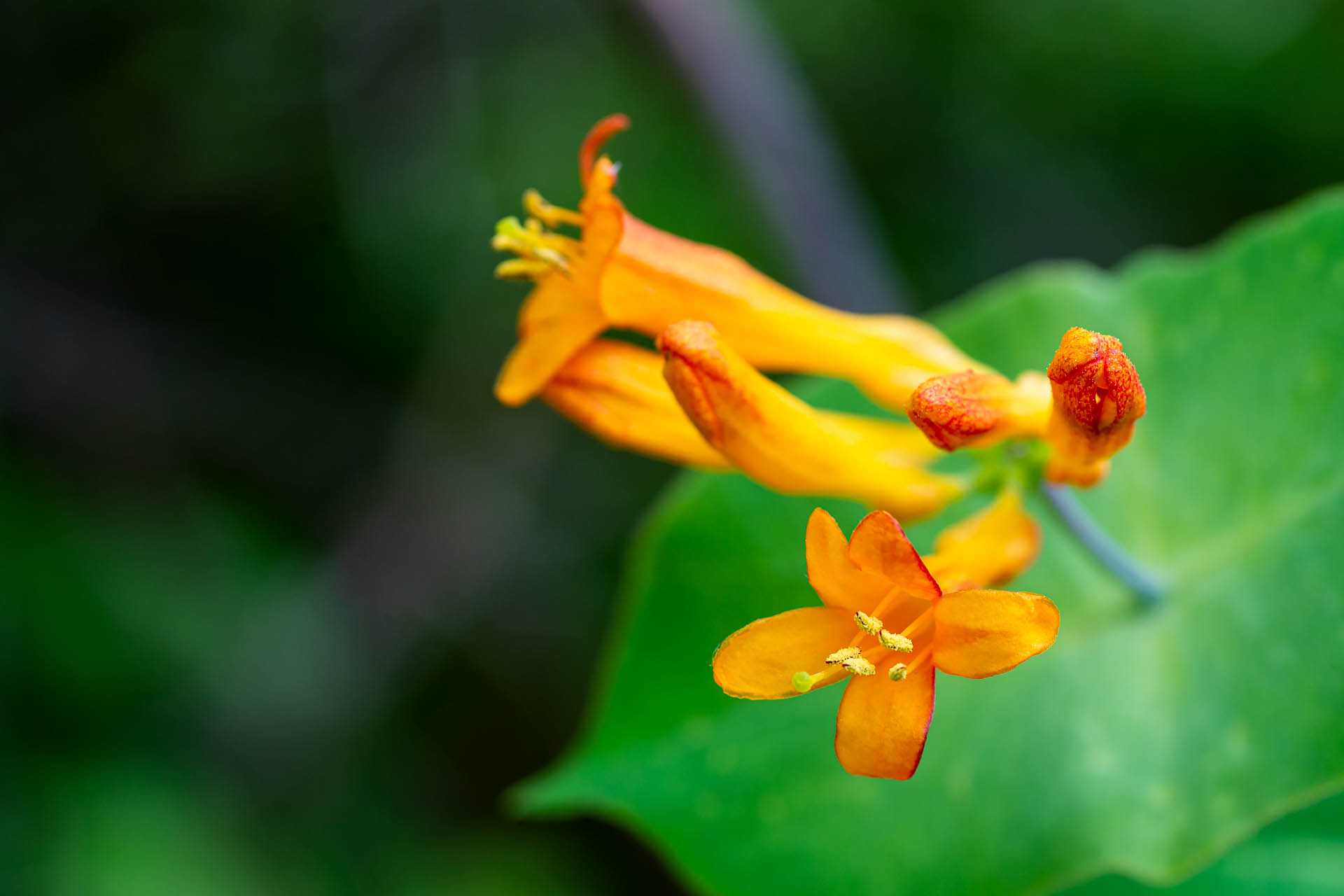 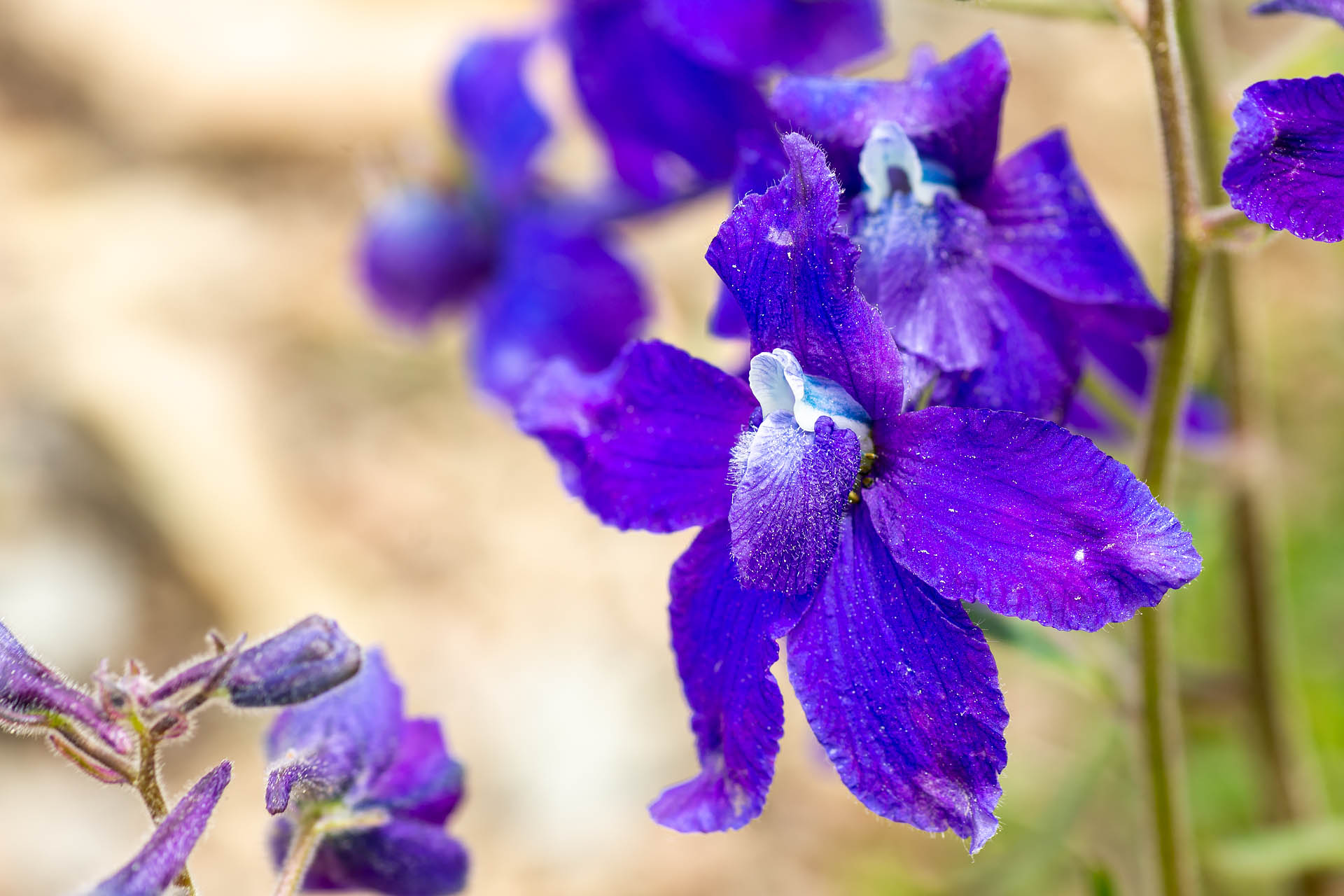 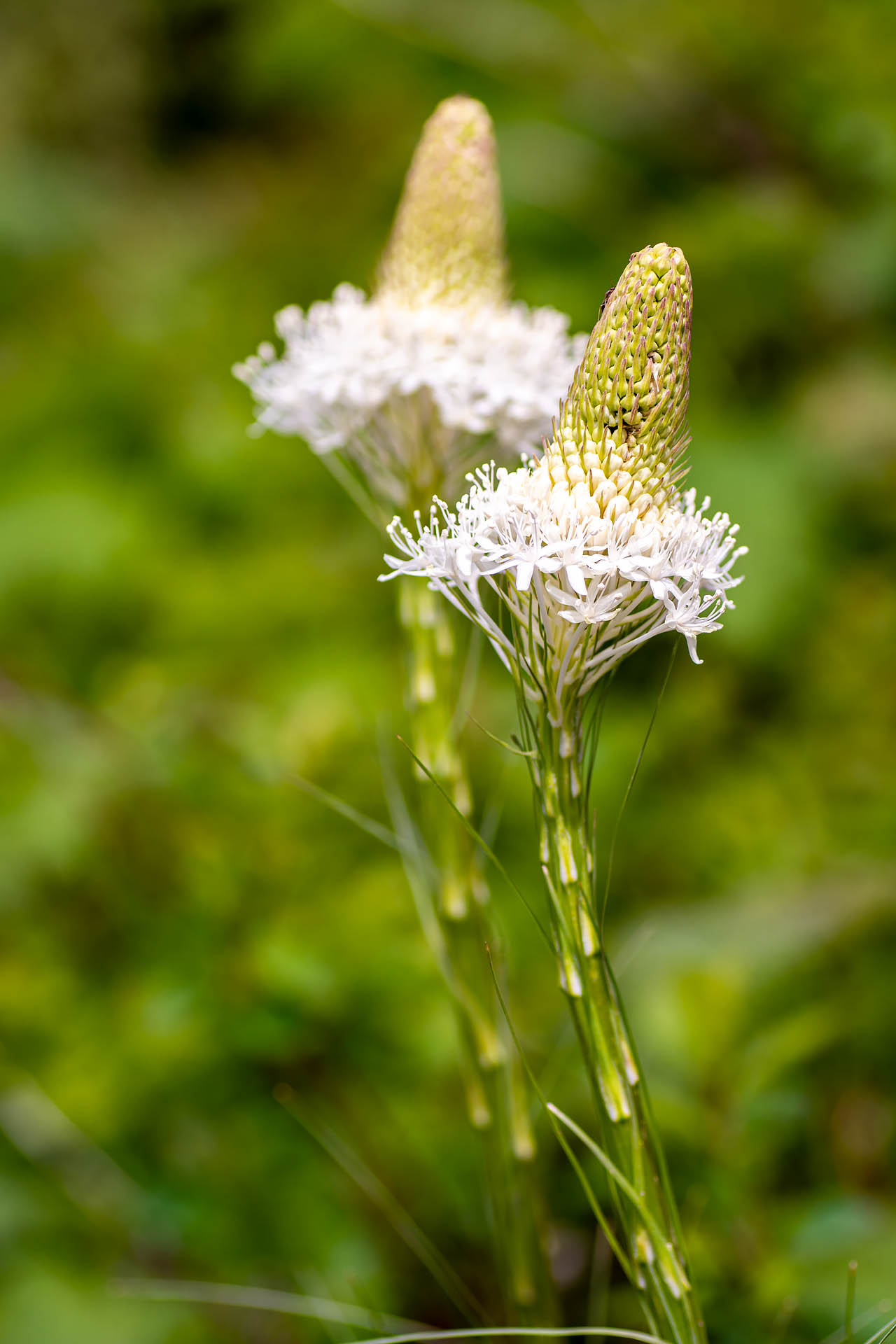 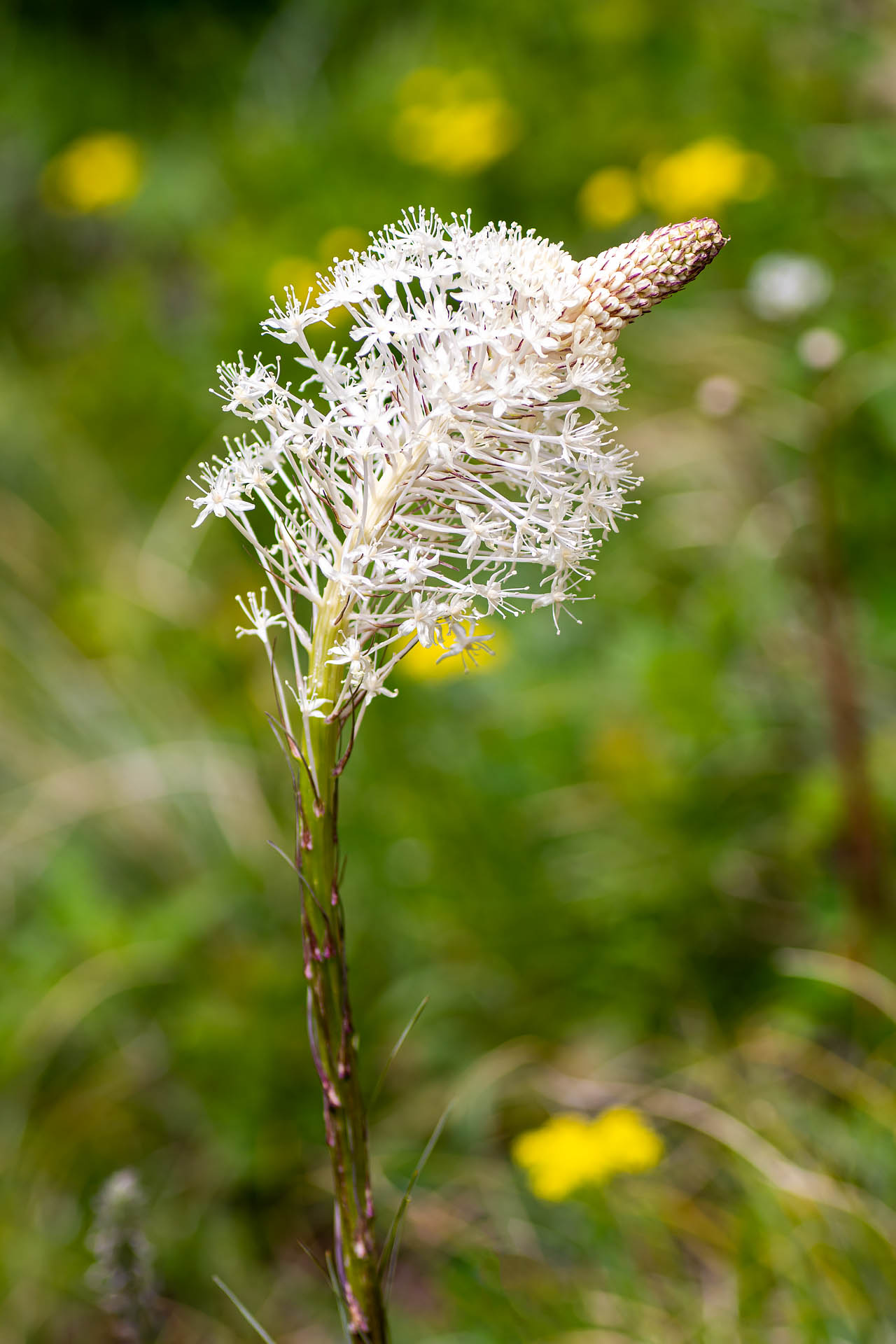 When we finally reached the summit, we were able to enjoy sweeping views down into the Flathead Valley, overlooking the Flathead River and nearby Columbia Falls to our west. To the south, the layered peaks of the Swan Range stretched into the distance, many still speckled with stubborn swaths of snow. To the southeast, Hungry Horse Reservoir peeked out from obtrusive ridgelines, as the craggy crests of the Flathead Range soared just beyond. 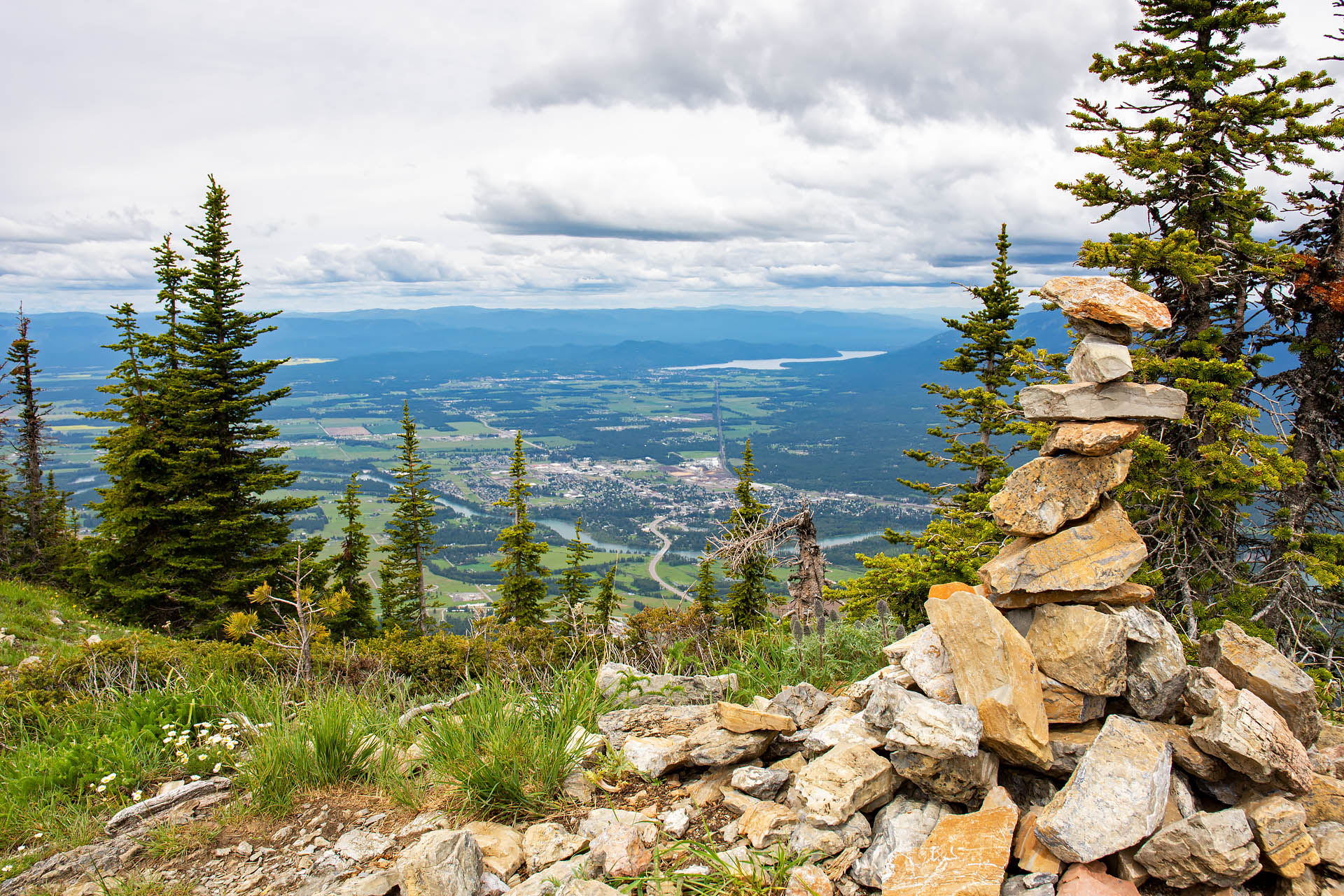 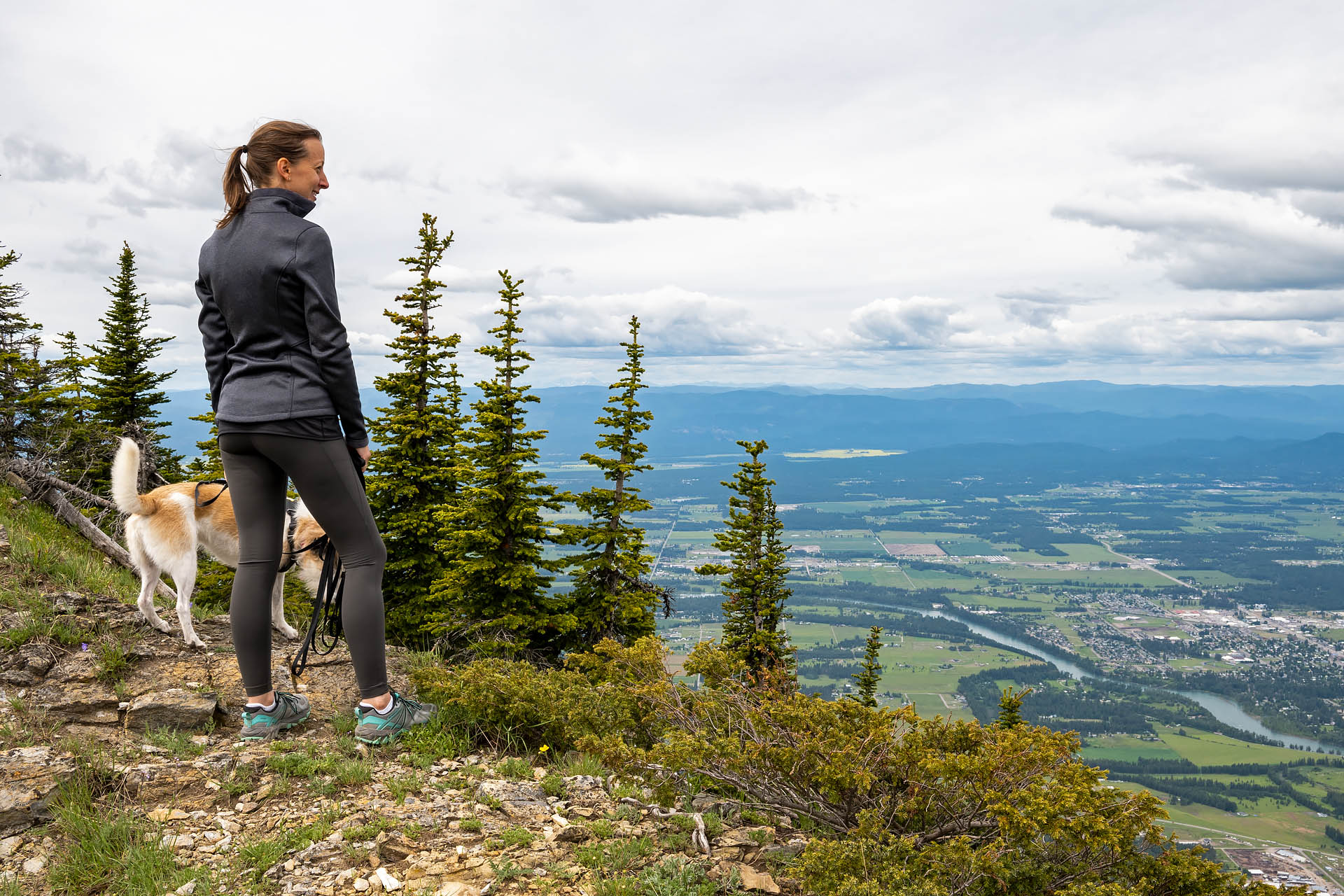 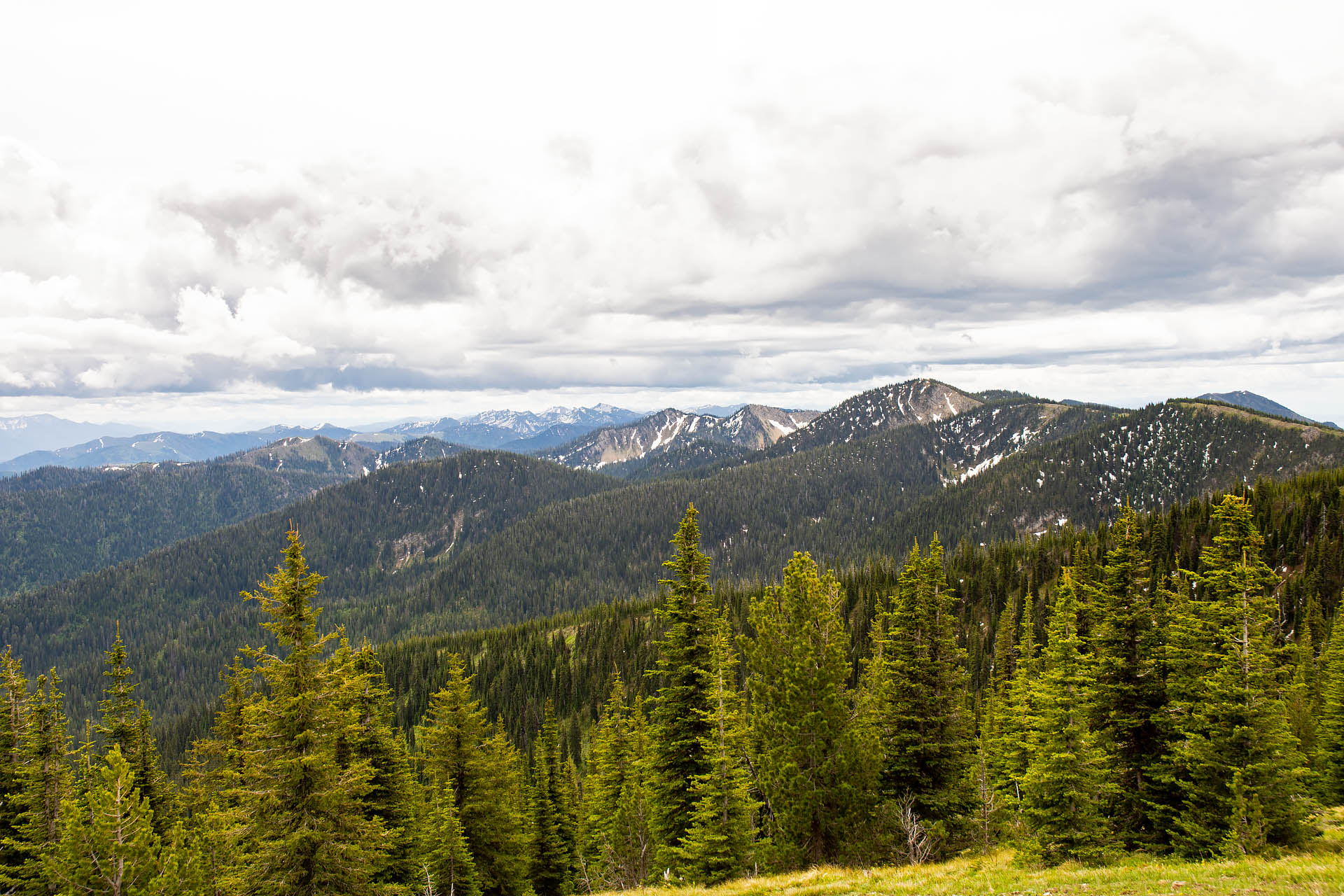 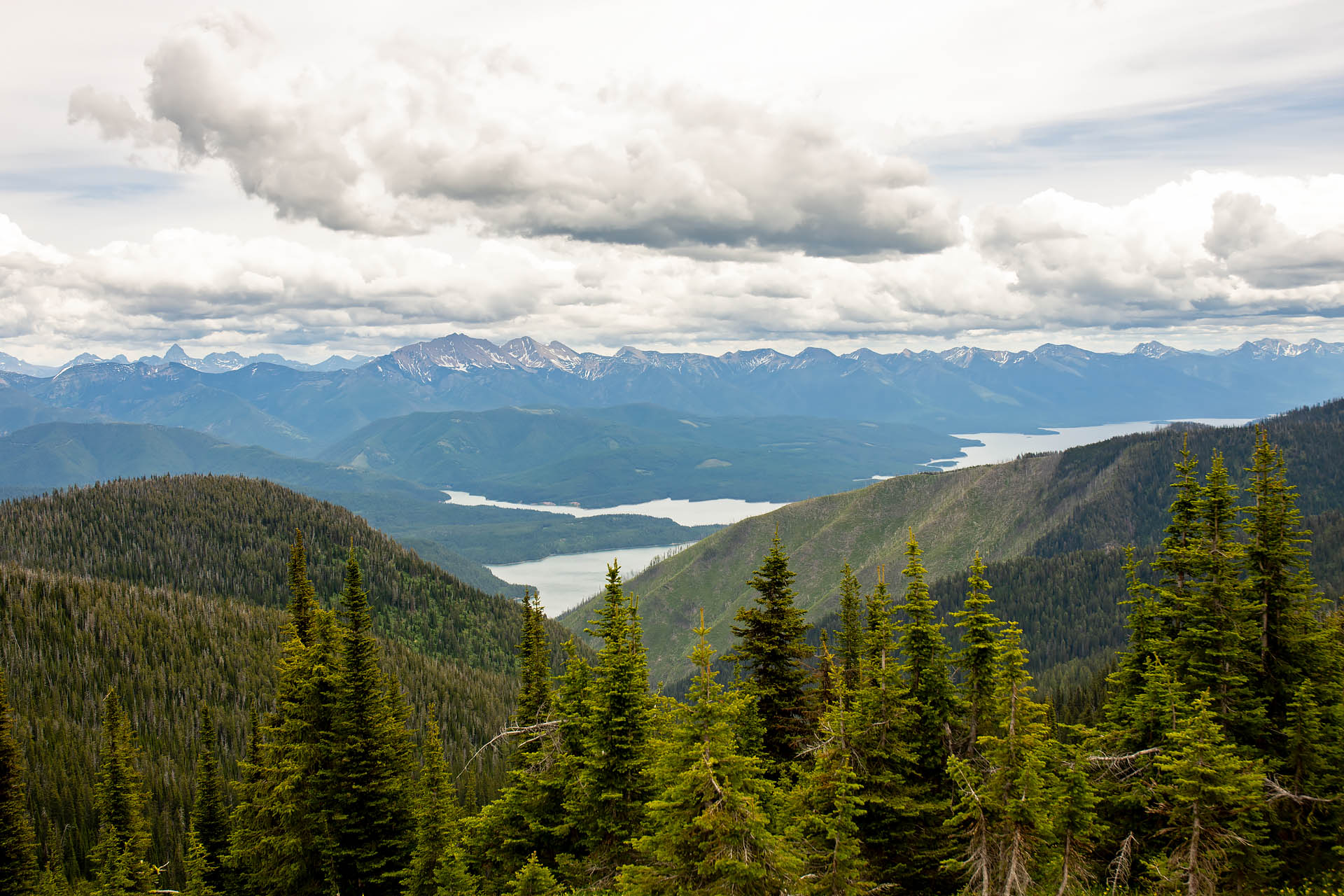 After spending over an hour and a half at/around the summit – eating a quiet lunch by ourselves, enjoying some time chatting with the one other group of hikers, and battling the wind to capture some shots of the striking alpine wildflowers – we finally headed back down the mountain. While Columbia wasn’t the most spectacular route we’ve ever been on by any stretch, we found it to be a surprisingly peaceful hike and a pretty decent workout as well (for two of us, at least… Sanchez was still sprinting tirelessly at the end). 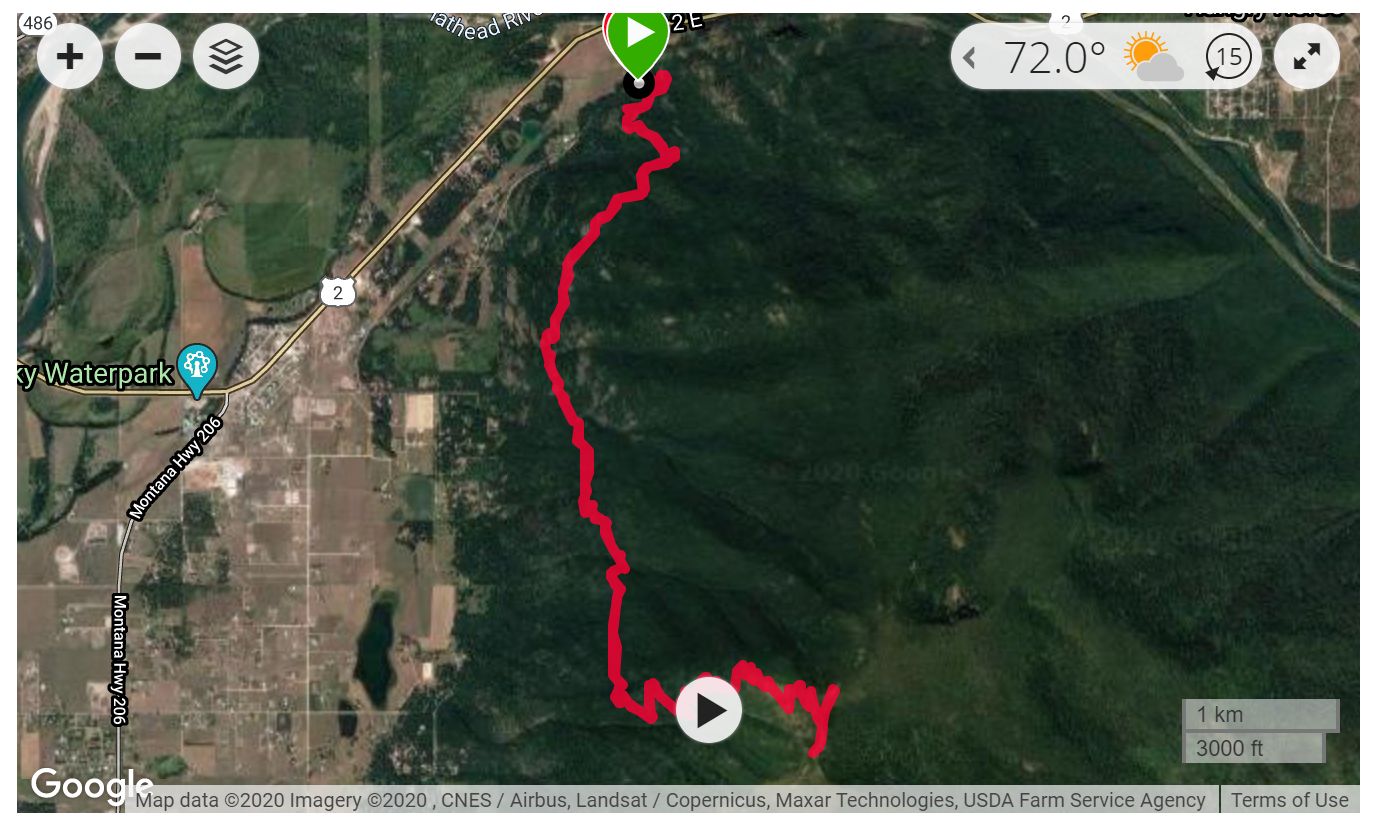 (1) This trail is a multi-use trail for hiking and mountain biking, as well as for motor bikes. I can’t say I fully support the concept of motorized bikes on the trail. We did come across one moto rider as we headed to the summit. Although he had impeccable trail etiquette (e.g. turning off the ignition, easing off the trail so we could pass), the damage the bikes are causing to the trail is readily visible, with deep, v-shaped gouges from the wear and erosion. Additionally, I’m not sure most hikers find loud engines and the smell of gas particularly appealing when they’re out on the trail (I, for one, go out into nature to escape such clamor).

(2) There is a waterfall just off the main trail which seems to be a much more popular destination than the summit. During the first couple miles, the trail crosses a few trickling streams. Around mile two, at the last water source en route to the summit, a path veers off to the left. Apparently, it climbs briefly uphill to a small waterfall. As we were descending the final mile or so of trail, we unexpectedly met a slew of people making a late-afternoon trip to the falls. After not seeing anyone all day, it was shocking to suddenly see so many people back near the beginning of the trail.