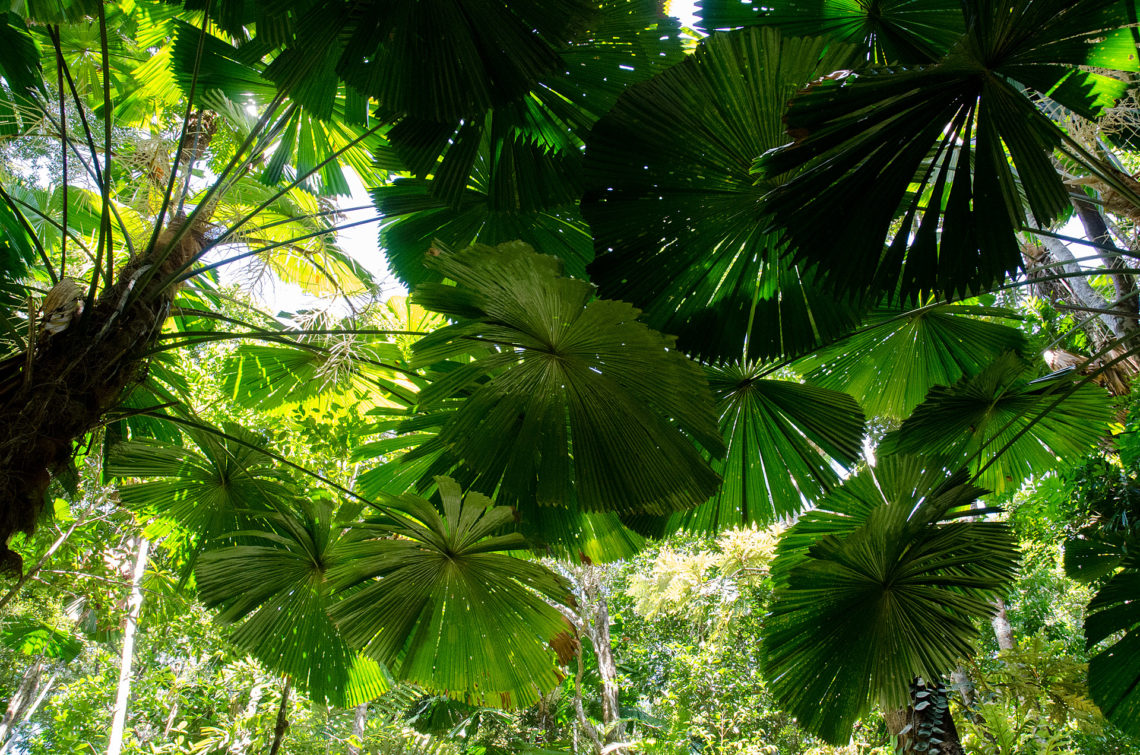 Just a couple hours north of Cairns lies the world’s oldest rainforest – The Daintree. The lush, tropical forests of Daintree National Park parallel the shoreline of the Coral Sea up to Cape Tribulation, ‘where the rainforest meets the reef.’

Unlike the drive south from Cairns to Airlie Beach, the northern highway was very scenic, peppered with secluded, sandy coves and thick forests. We crossed the Daintree River by a 5-minute “ferry,” which was nothing more than a flat barge on a pulley system that is dragged continuously back and forth across the narrow river for 18 hours a day. Once across the river, we did a couple of short walks through the peripheral forests of The Daintree – the Jindalba and Dubuji Boardwalks. Both footpaths wound through beautiful sections of lush rainforest, rife with giant fan palms and colorful (albeit camera-shy) butterflies. Along the trails, we spotted a number of golden orb-weaver spiders (so named for the shimmering gold fibers they spin) relaxing in their enormous webs, as cicadas serenaded us from the surrounding trees. We were even able to catch a brief glimpse of a Boyd’s forest dragon, an endearing green lizard who amusingly ran through the underbrush on his hind legs, listing from side to side with each awkward step. 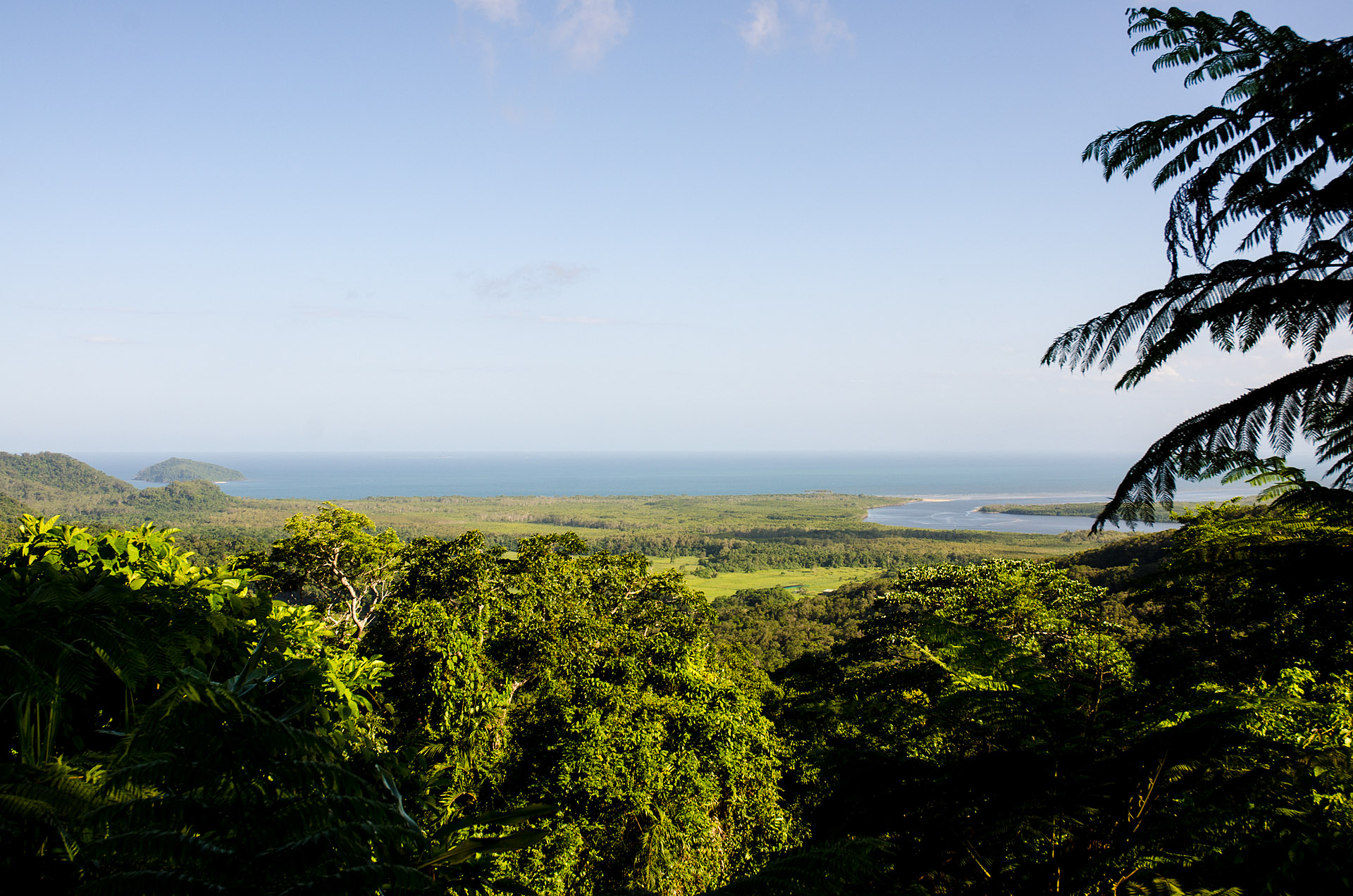 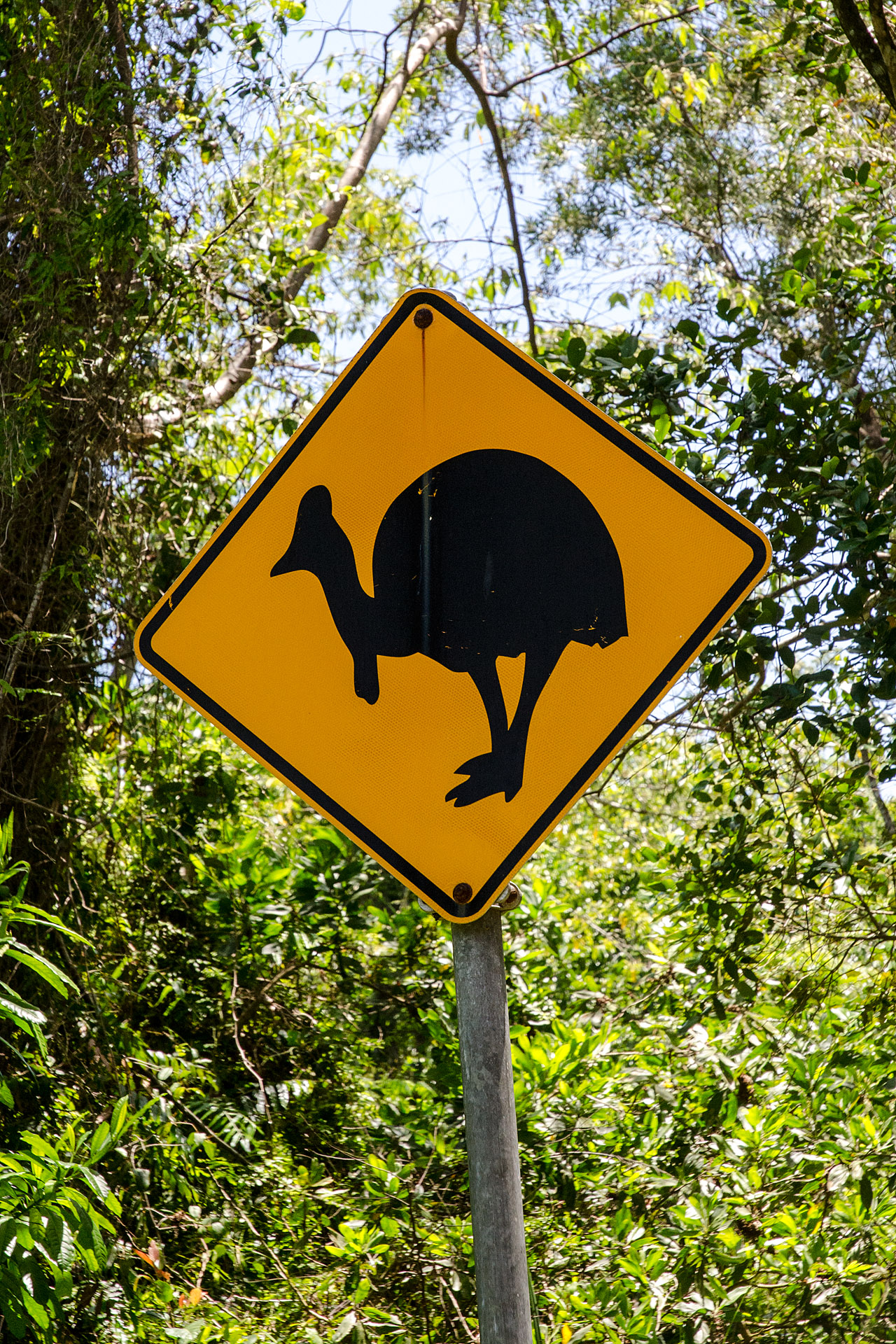 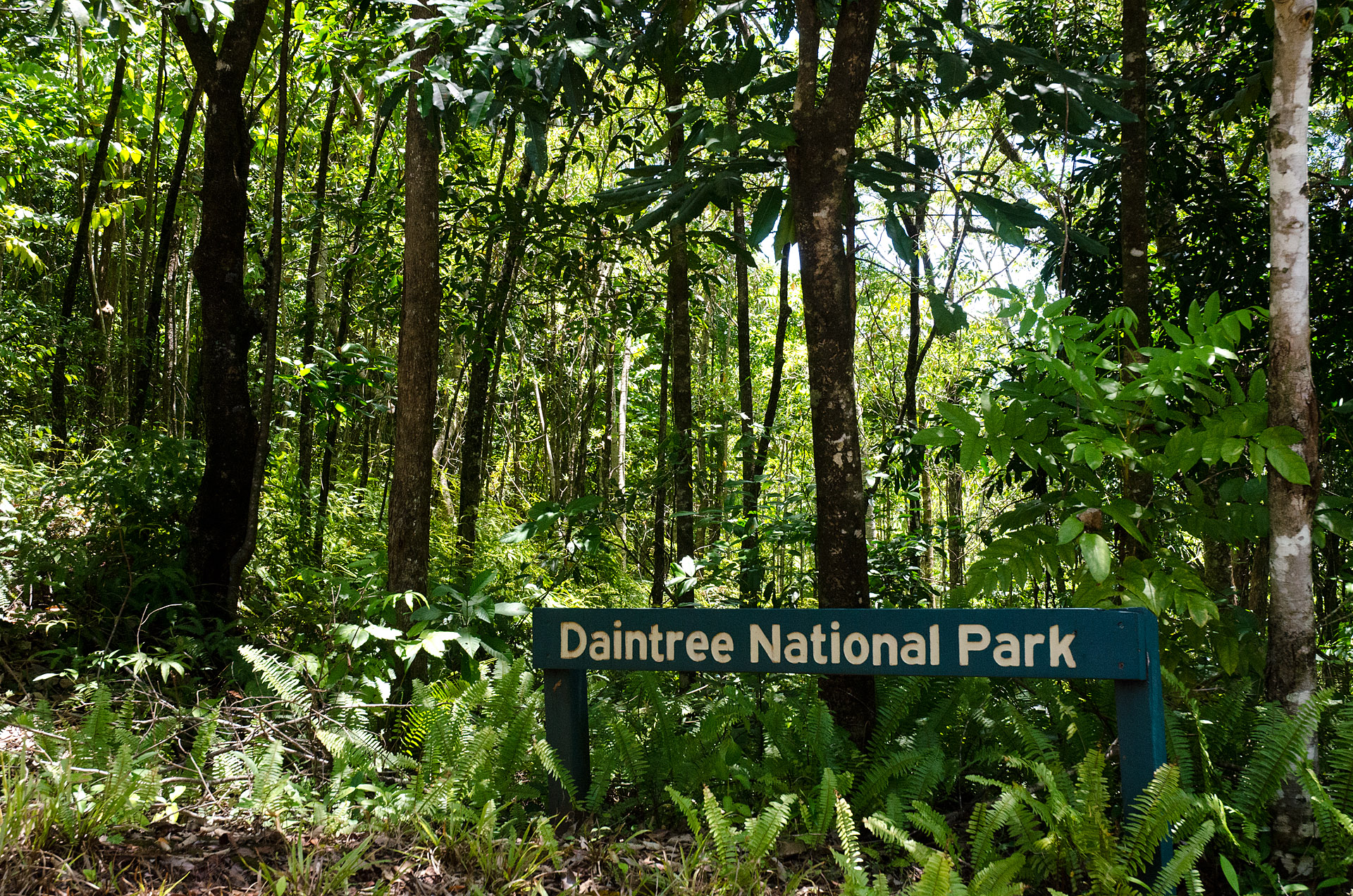 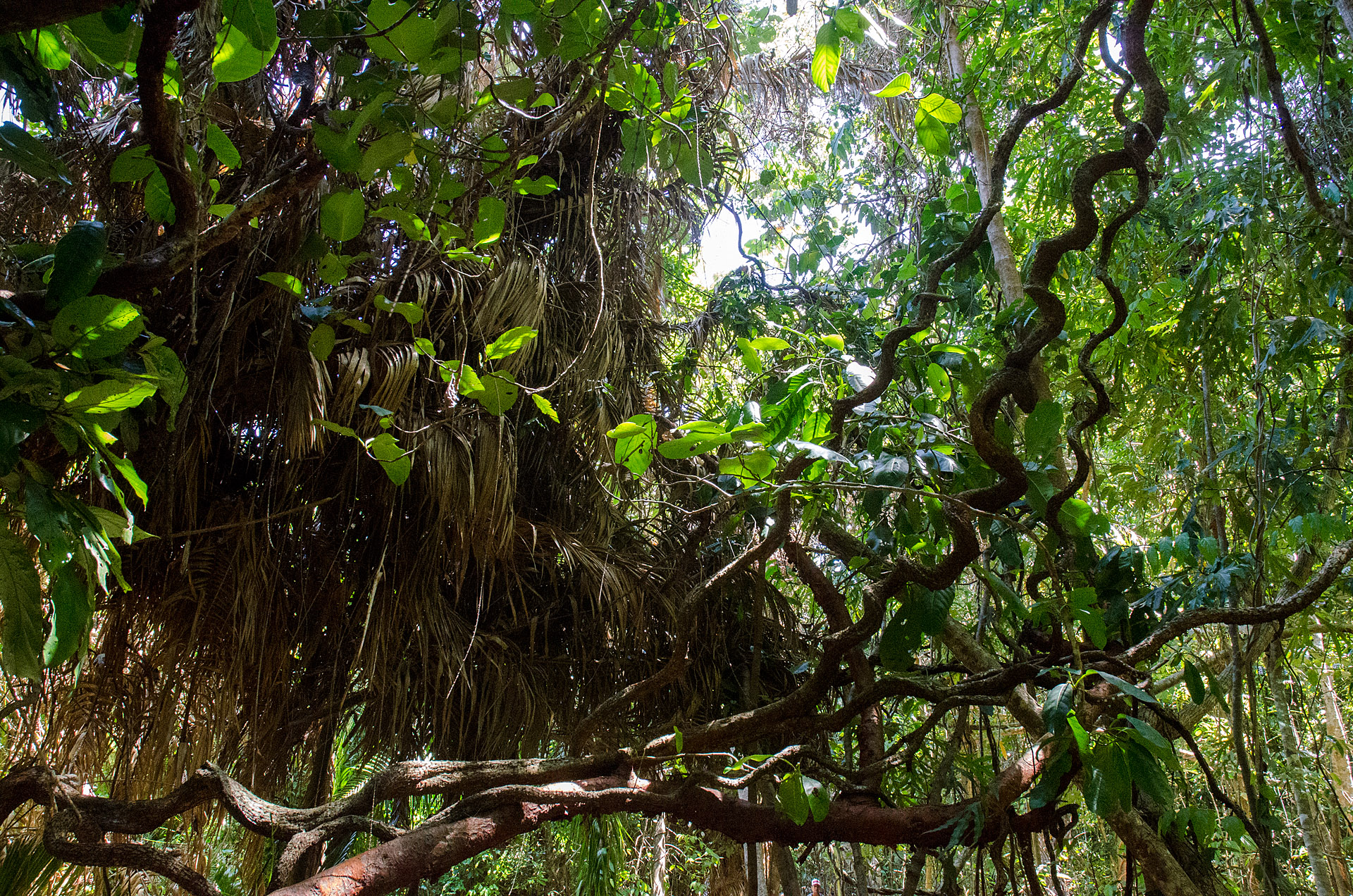 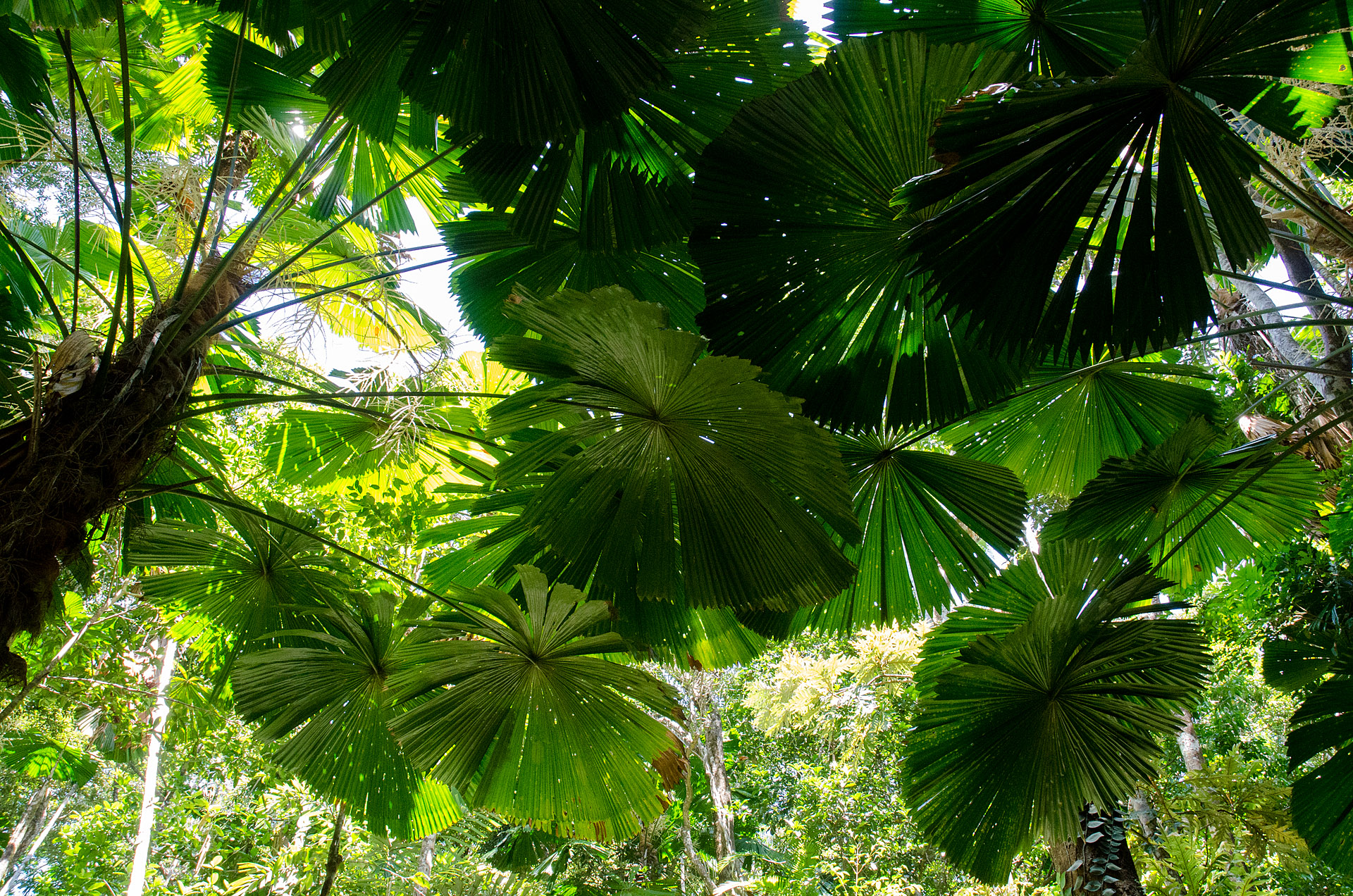 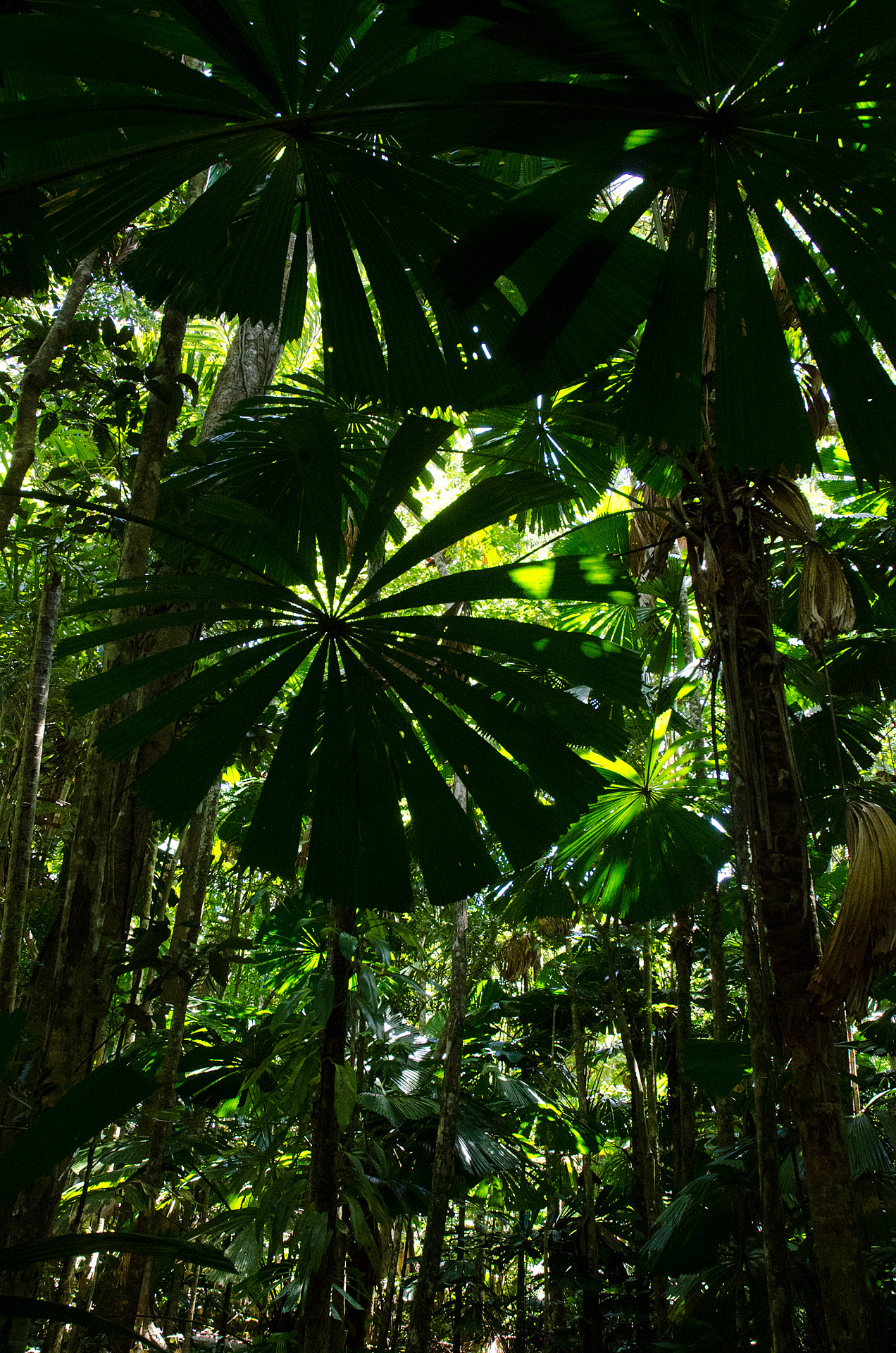 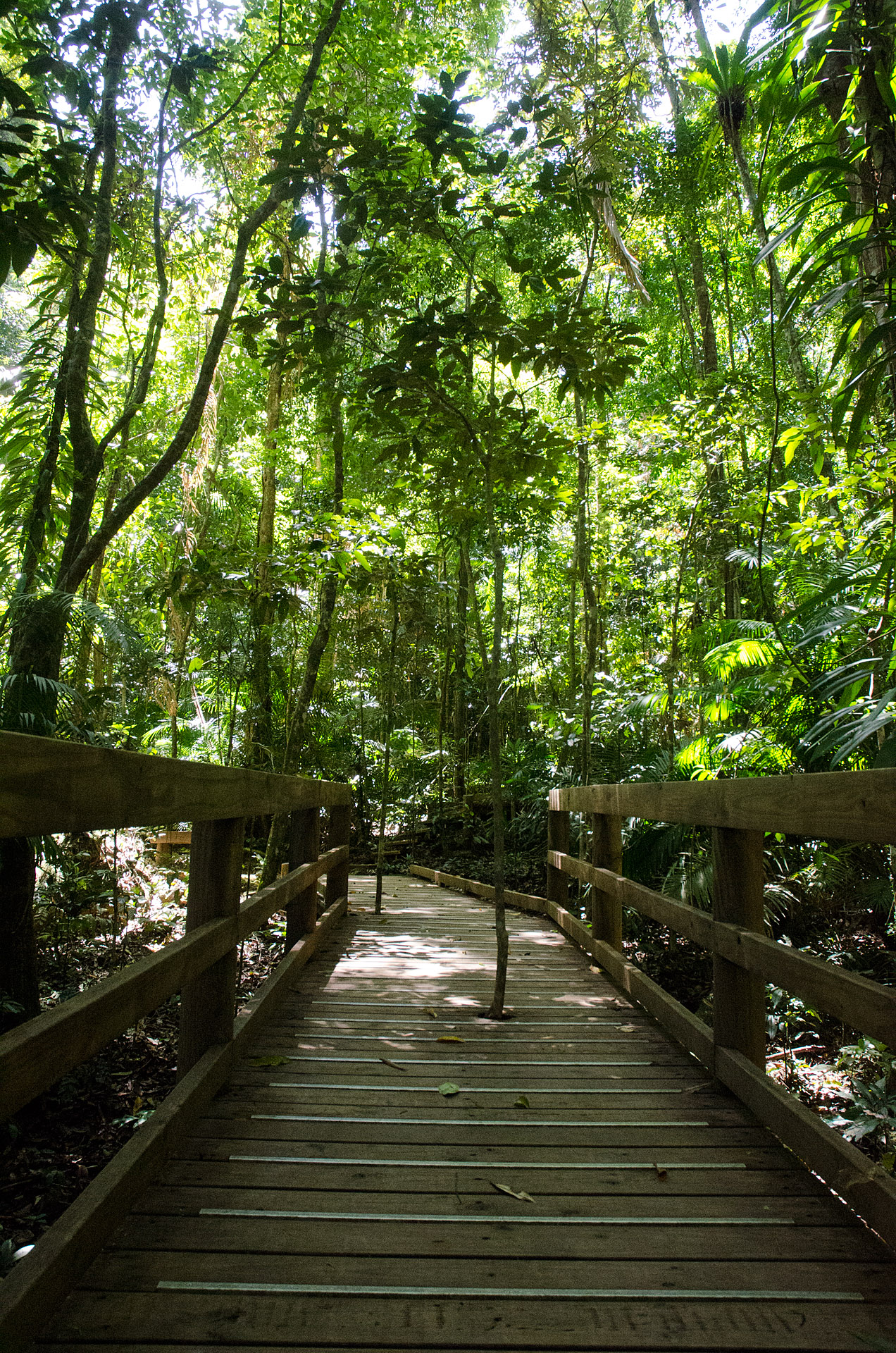 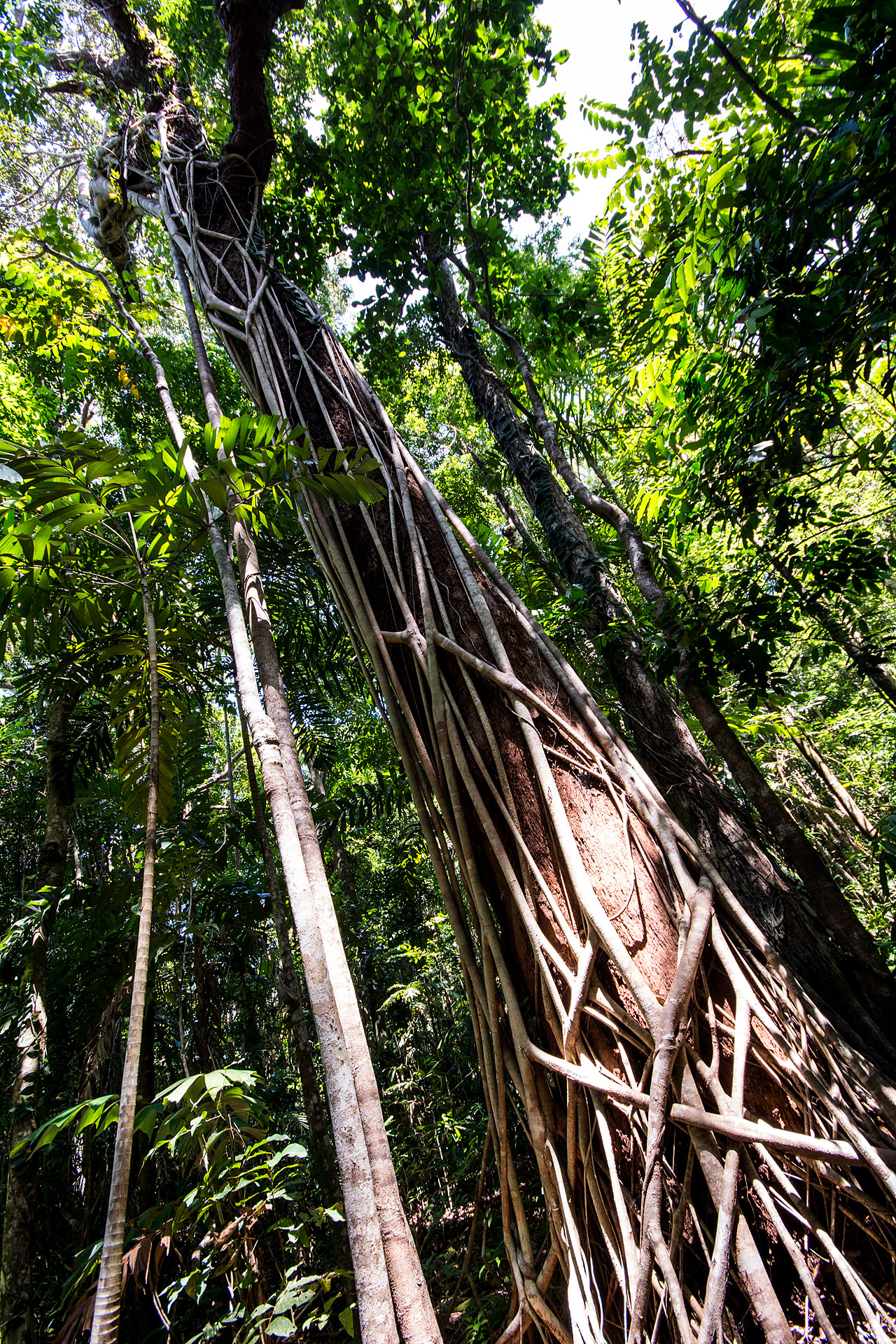 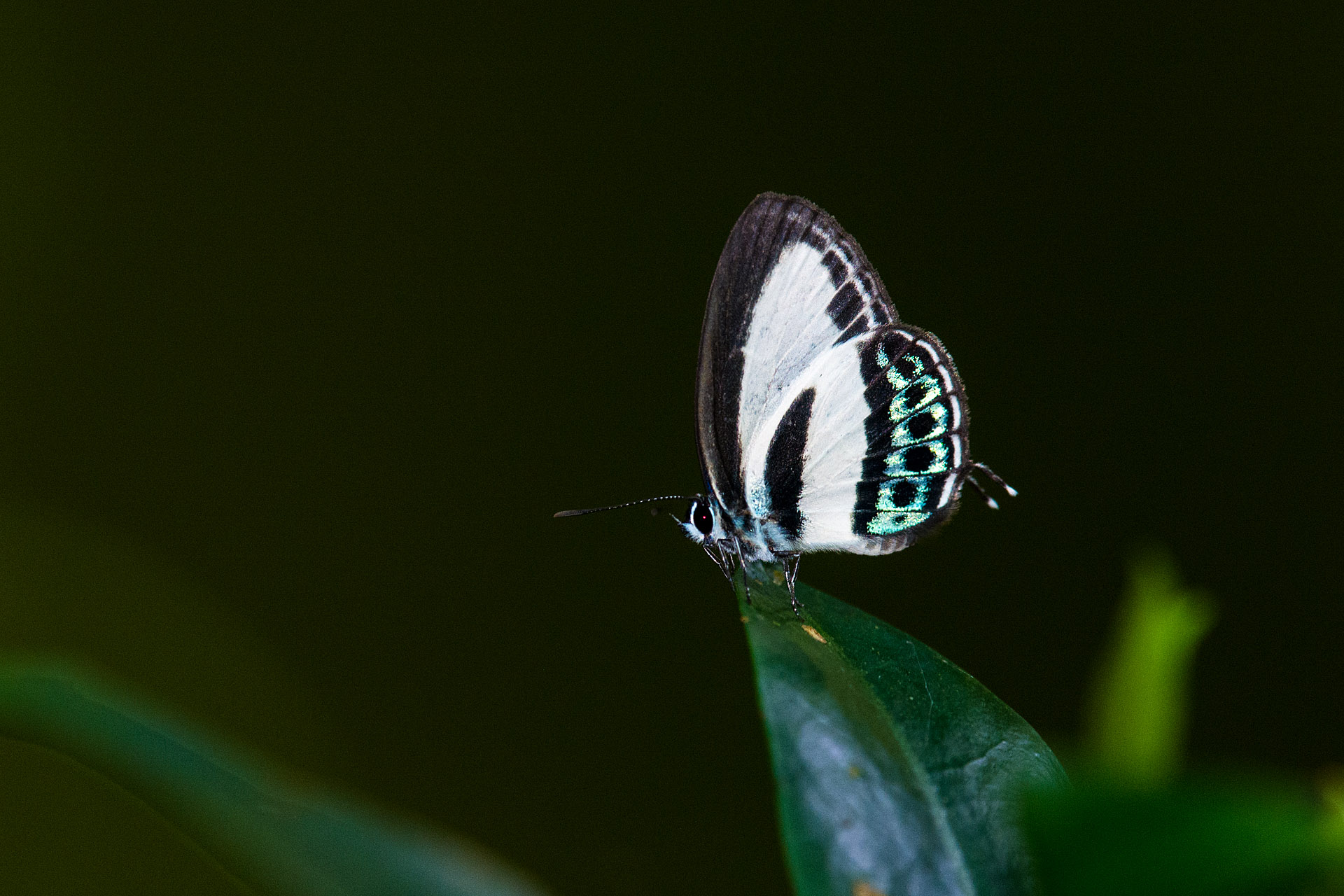 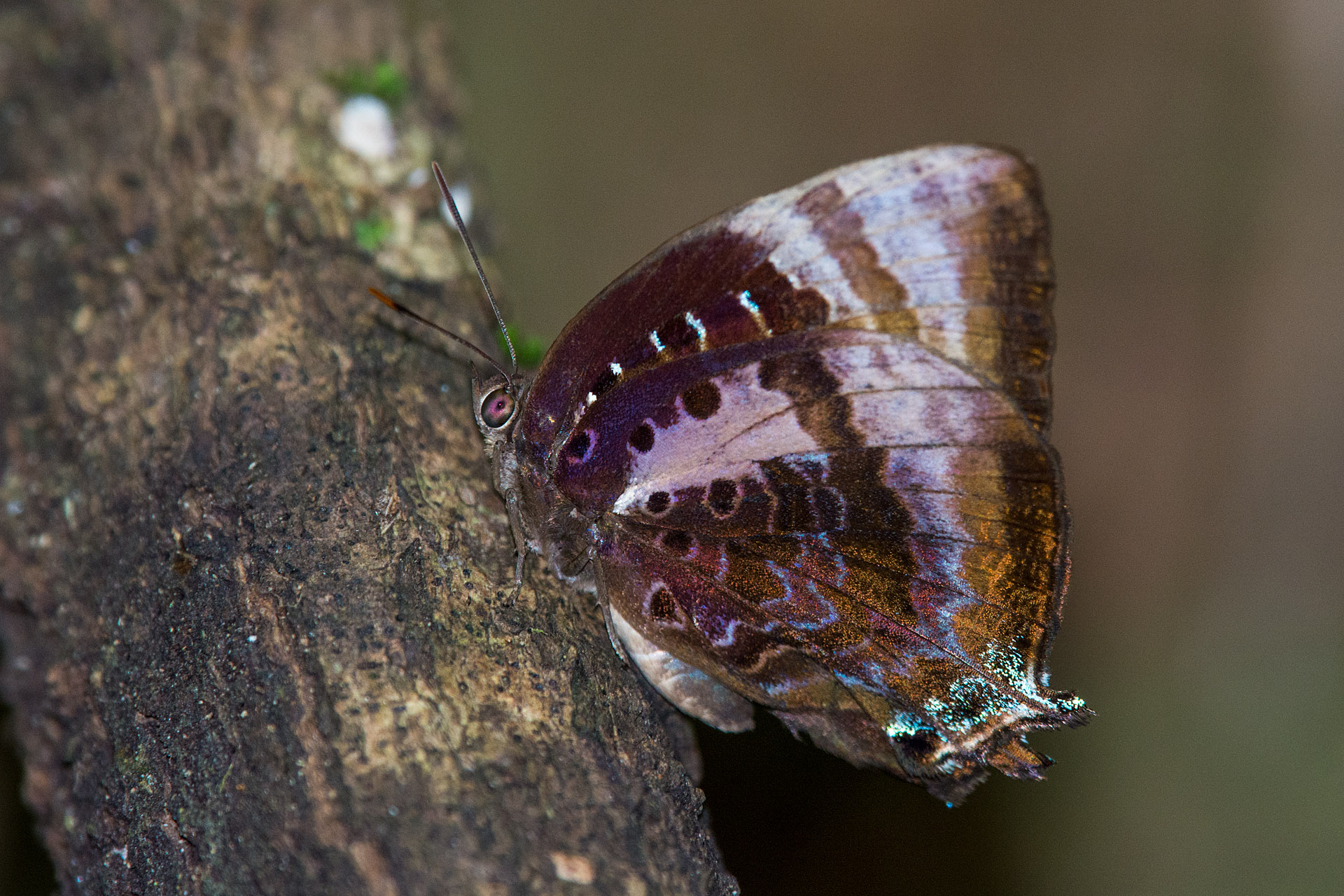 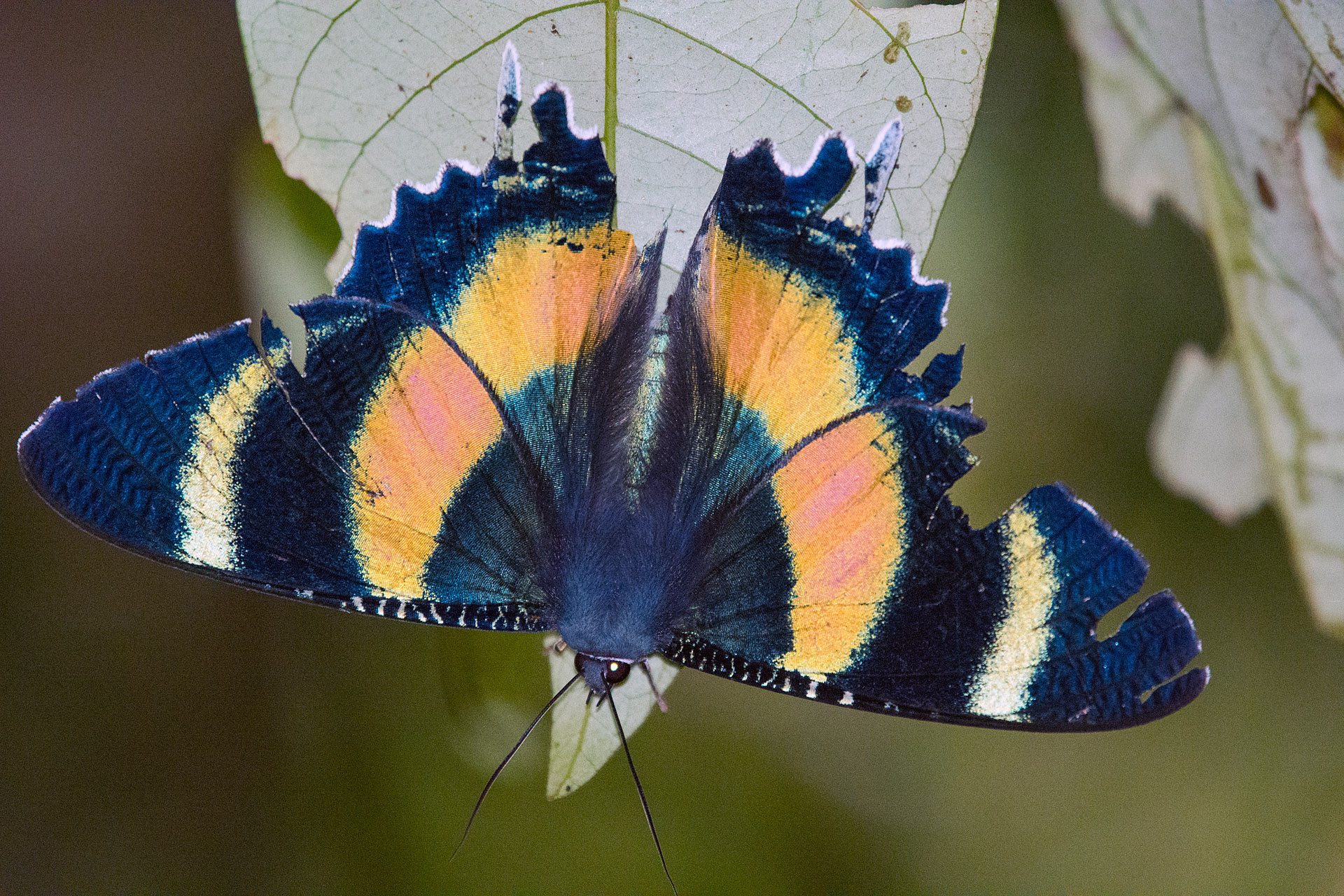 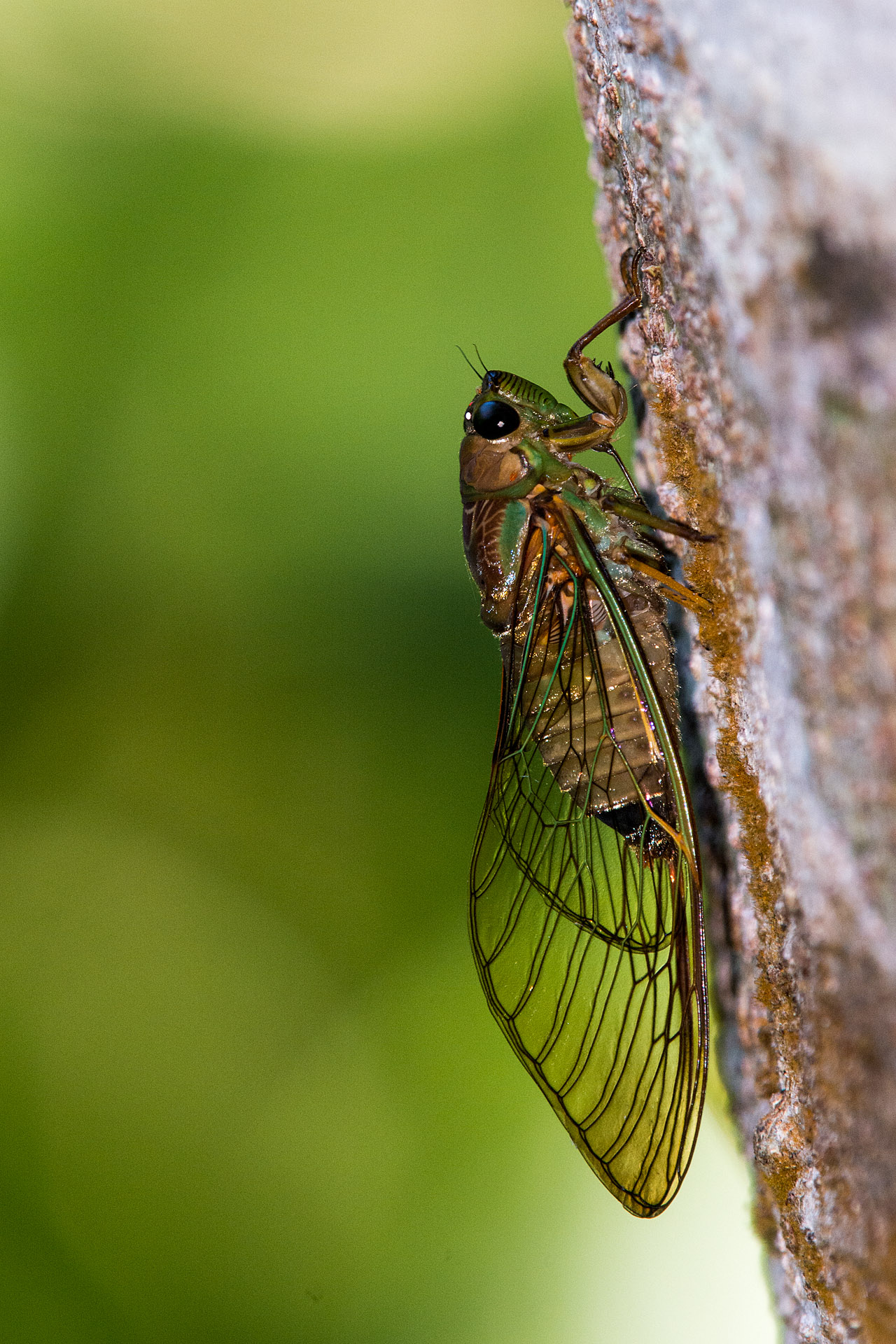 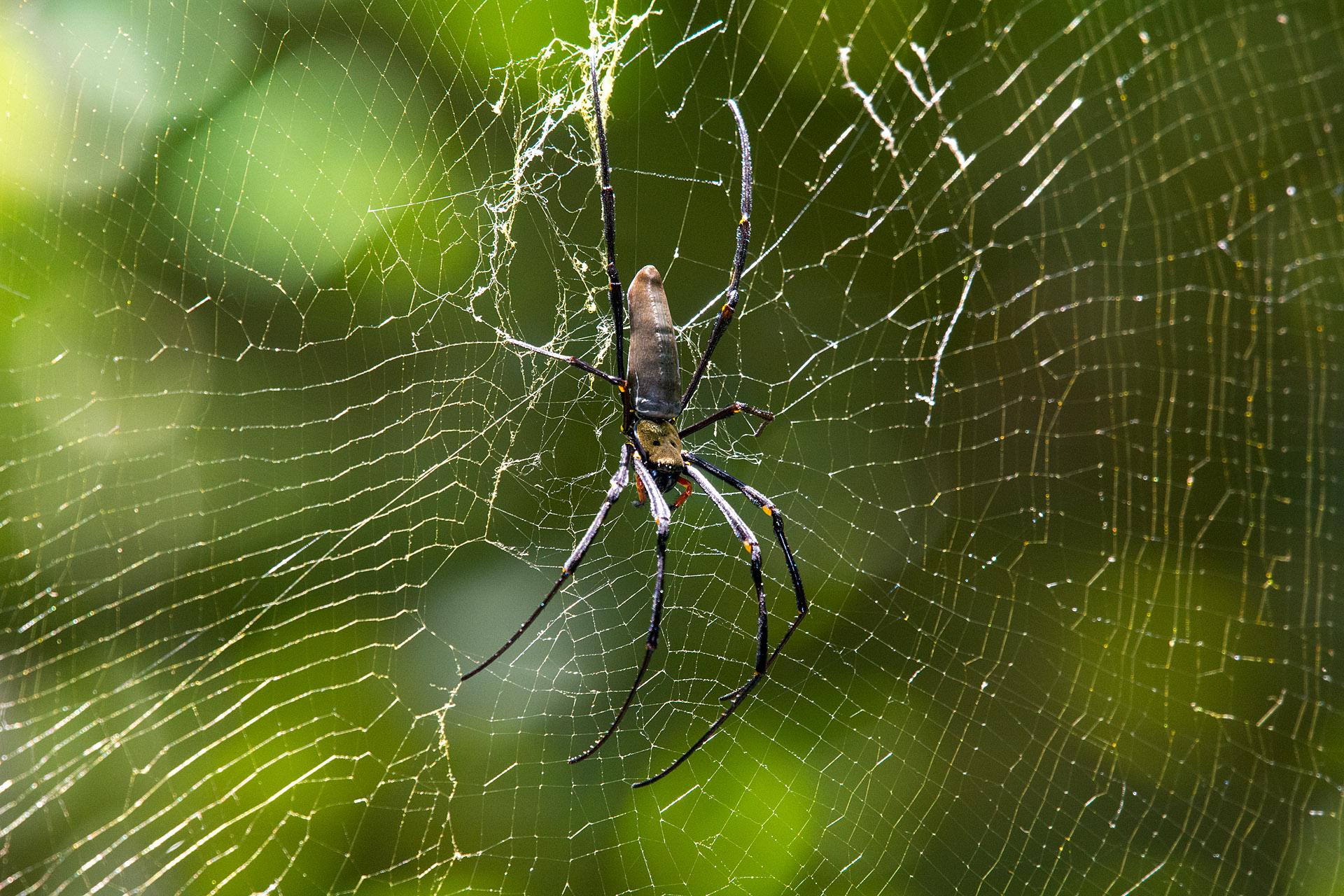 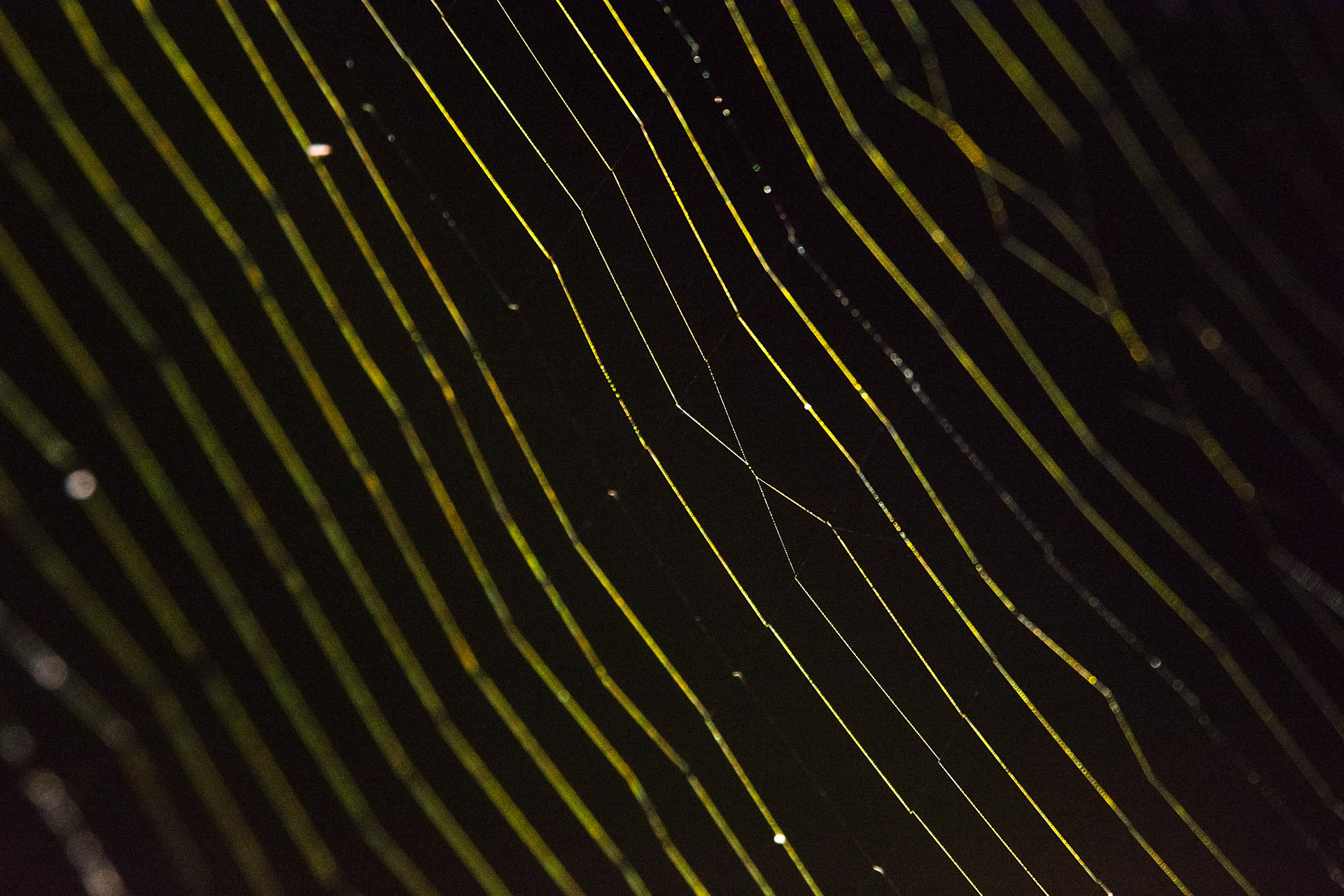 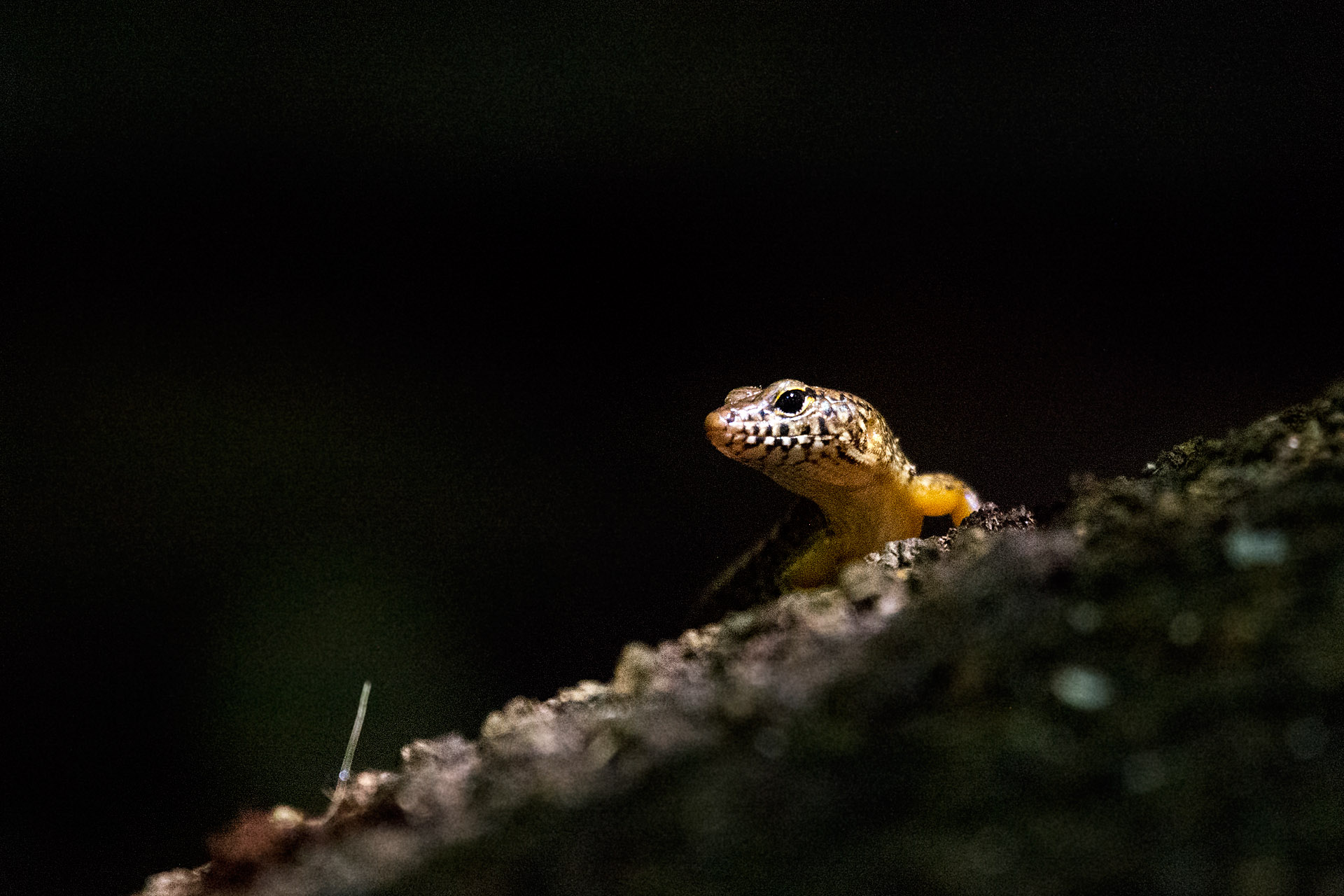 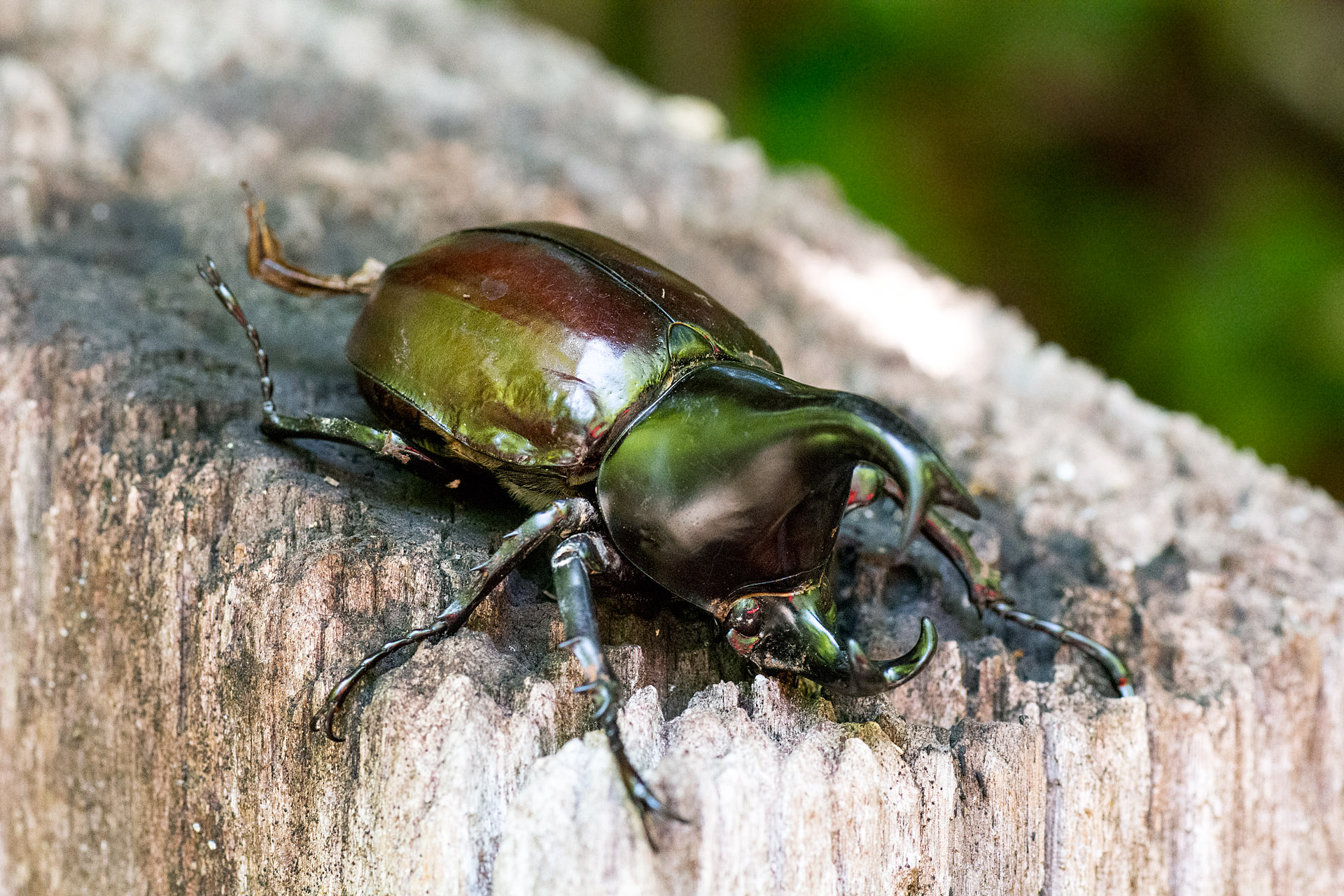 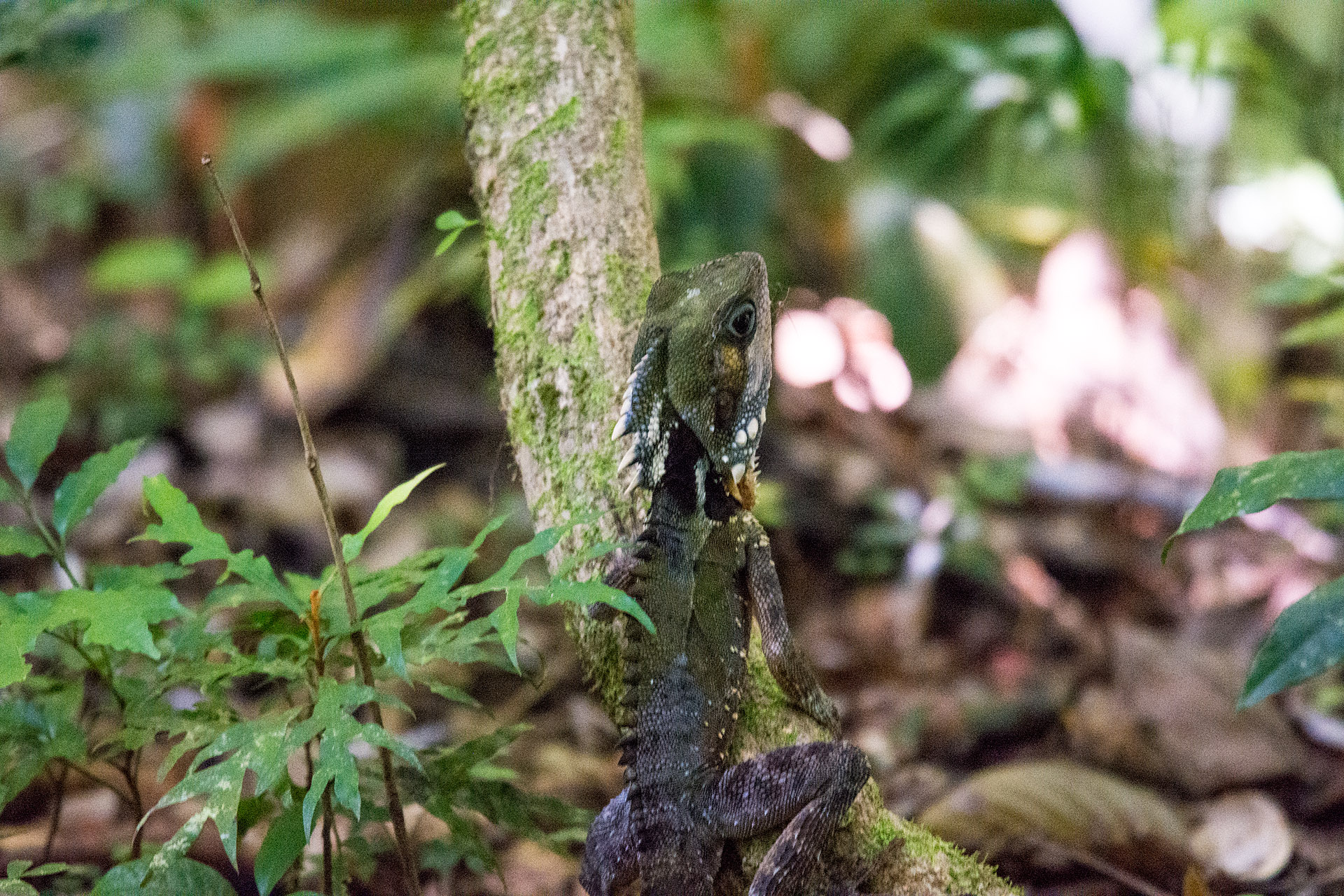 As we continued to make our way north along Cape Tribulation Road, we came across Floravilla, a small ice cream stand that churns all of their frozen treats by hand, using only fresh, organic, local ingredients. Choosing a flavor proved to be exceptionally challenging, as they had 26 selections, most made with enticing tropical fruits. I ultimately selected the ‘Daintree Rainforest,’ made with locally-harvested vanilla, coconut, lemon, ginger, and kale. Stephan enthusiastically opted for the coffee ginger. Both were delicious, and given unlimited cash and appetite, I’d have been content to sit there and plow through all two dozen.

Our final stop for the day was at Cape Tribulation Beach where, indeed, hillsides thick with humid forests tumbled to the sandy shores of the Coral Sea. The crescent-shaped cove was illuminated with warm, mid-afternoon sunlight and along the wooded edge of the beach, brush-turkeys scrambled in and out of the scrub. A short walking path led up to Kulki Lookout, which offered a fairly underwhelming view of the beach below. It did, however, provide us with the opportunity to observe a handful of brush-turkeys as well as an orange-footed scrub fowl, who persistently excavated the leaf litter along the forest floor. 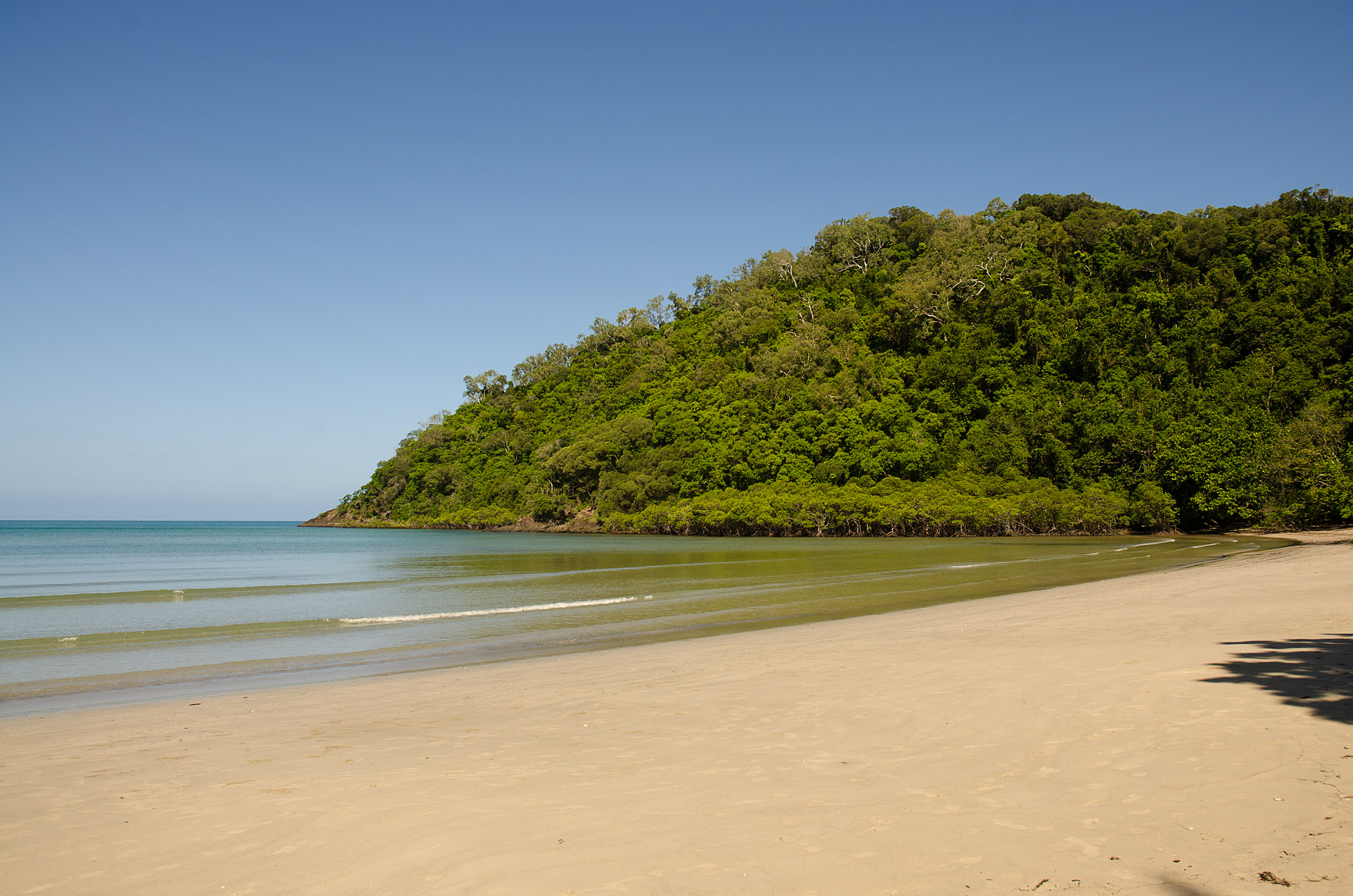 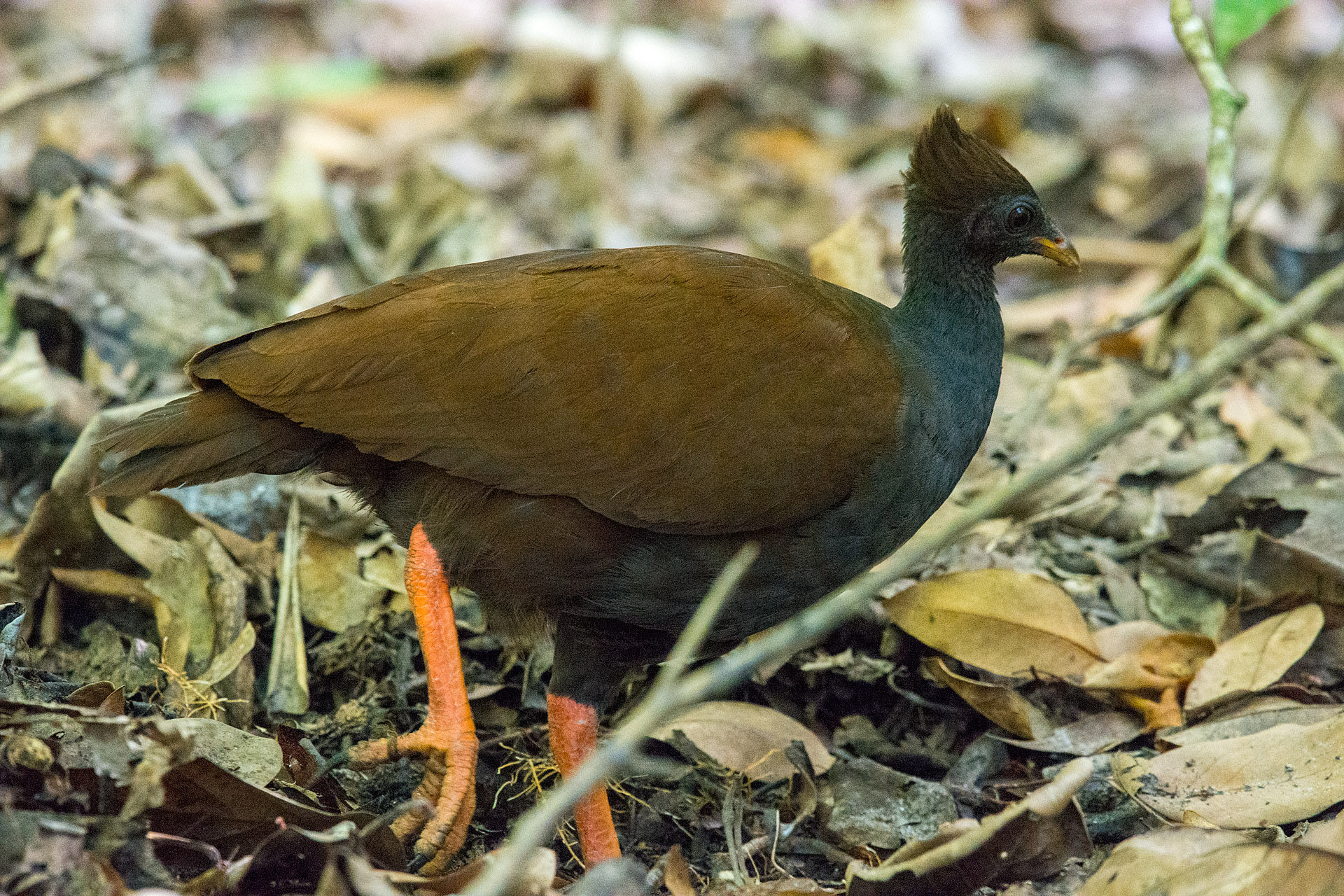 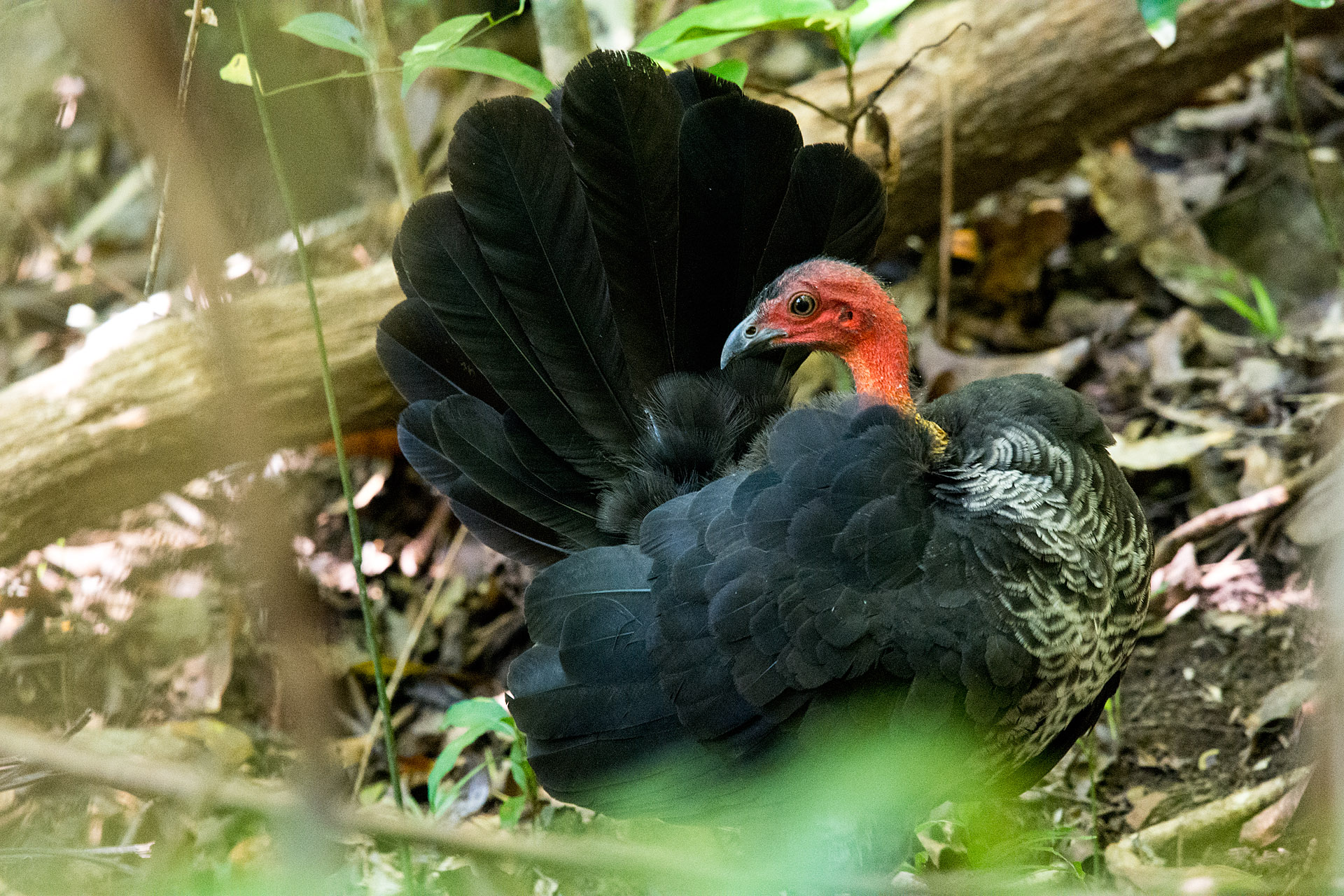