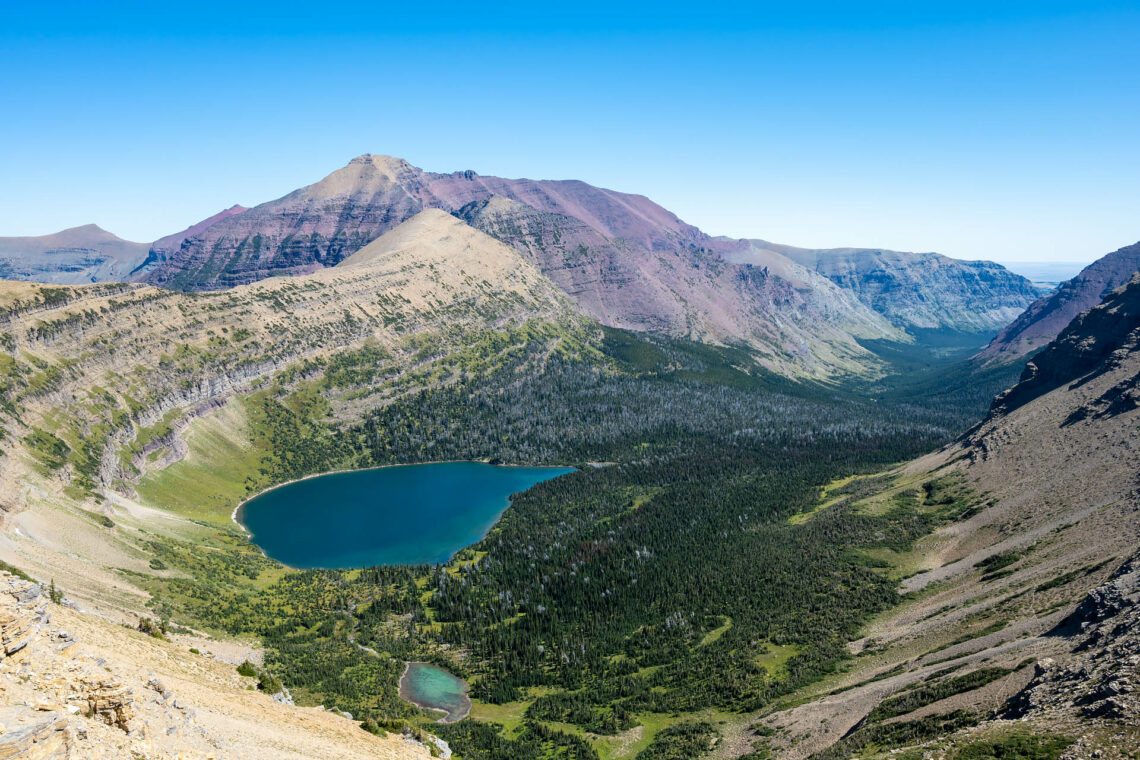 The eighteen-mile Dawson/Pitamakan Pass trail is tucked away in the Two Medicine area of Glacier. This quiet corner in the southeastern part of the national park has no hotels, and is well away from the hustle and bustle of the Going-to-the-Sun Road. It’s a bit out of the way, and has fewer trails than some of Glacier’s more trafficked areas. Known as the ‘backbone of the world,’ Two Medicine’s lands have been sacred to the people of Blackfeet Nation for thousands of years.

Two Medicine was one area of the park we were super excited to explore. We spent three months hiking around northwest Montana last summer, but were unable to hike this route (as well as couple in Many Glacier) due to the COVID-related closure of East Glacier. While we were disappointed, it gave us a reason to return this year.

As we drove across western Montana from Washington to our rural retreat in Pendroy – about an hour southeast of Two Medicine – our hearts sank a bit. A haze of impenetrable smoke from the western wildfires had settled into the Missoula Valley, and we wondered how the air quality would be further north. 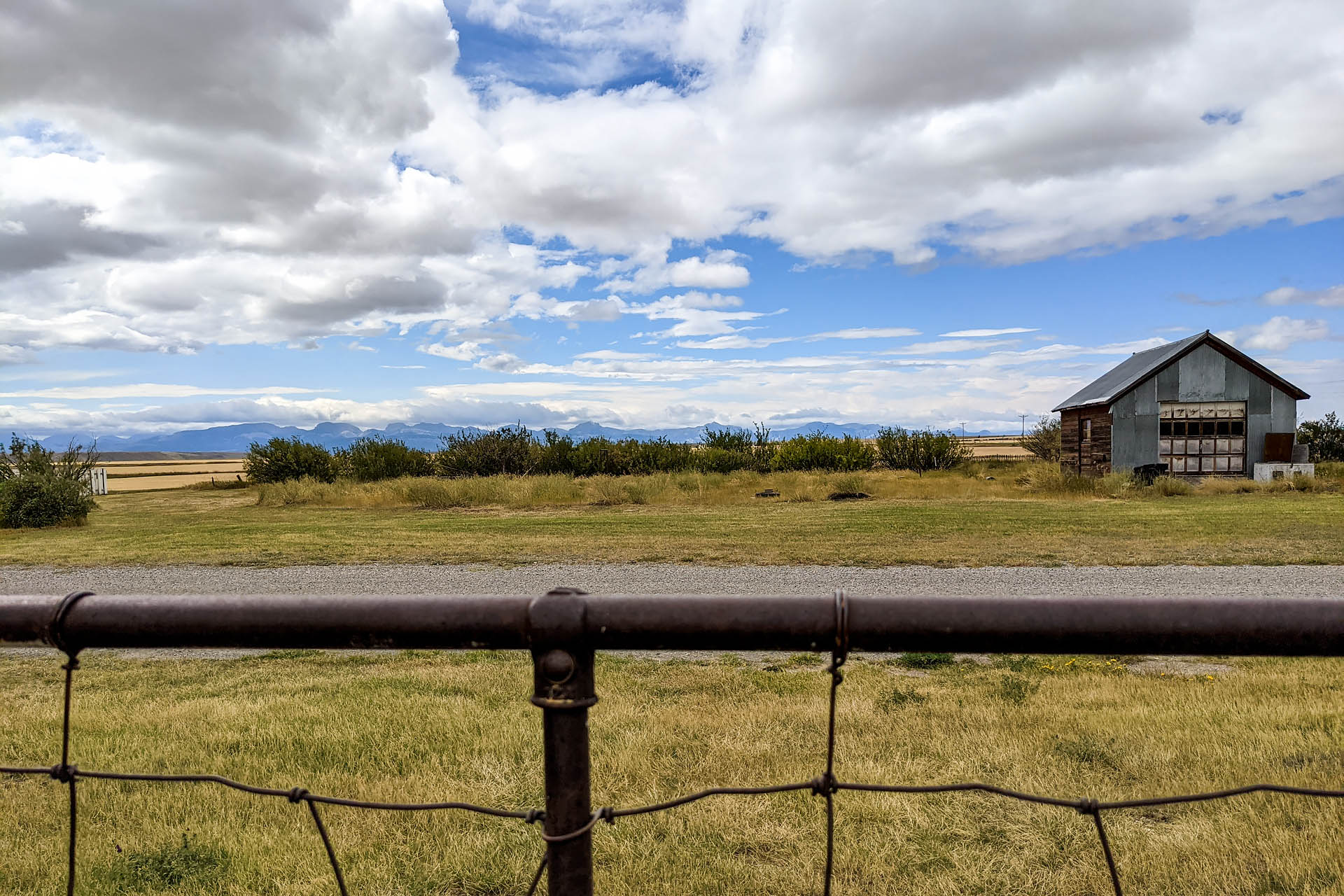 After obsessively watching the smoke forecast for the next 48 hours, we decided to hit the trail the day after a cold front moved through the region. The air quality was already significantly better than it had been around Missoula, but we had our fingers crossed that the airmass would push out the last of the stubborn haze. Much like our hike the week before in Washington’s Enchantments, we couldn’t possibly have gotten luckier with the conditions. The smoke and haze were virtually nonexistent, the average temp was a perfect 68F, and there was a light breeze. It felt kind of like winning the lottery for the second time.

To say this hike was extraordinary would be a colossal understatement. From panoramas of massive mountain summits to bird’s-eye views of jewel-toned lakes, the scenery around this swath of the national park is just mind-blowing. 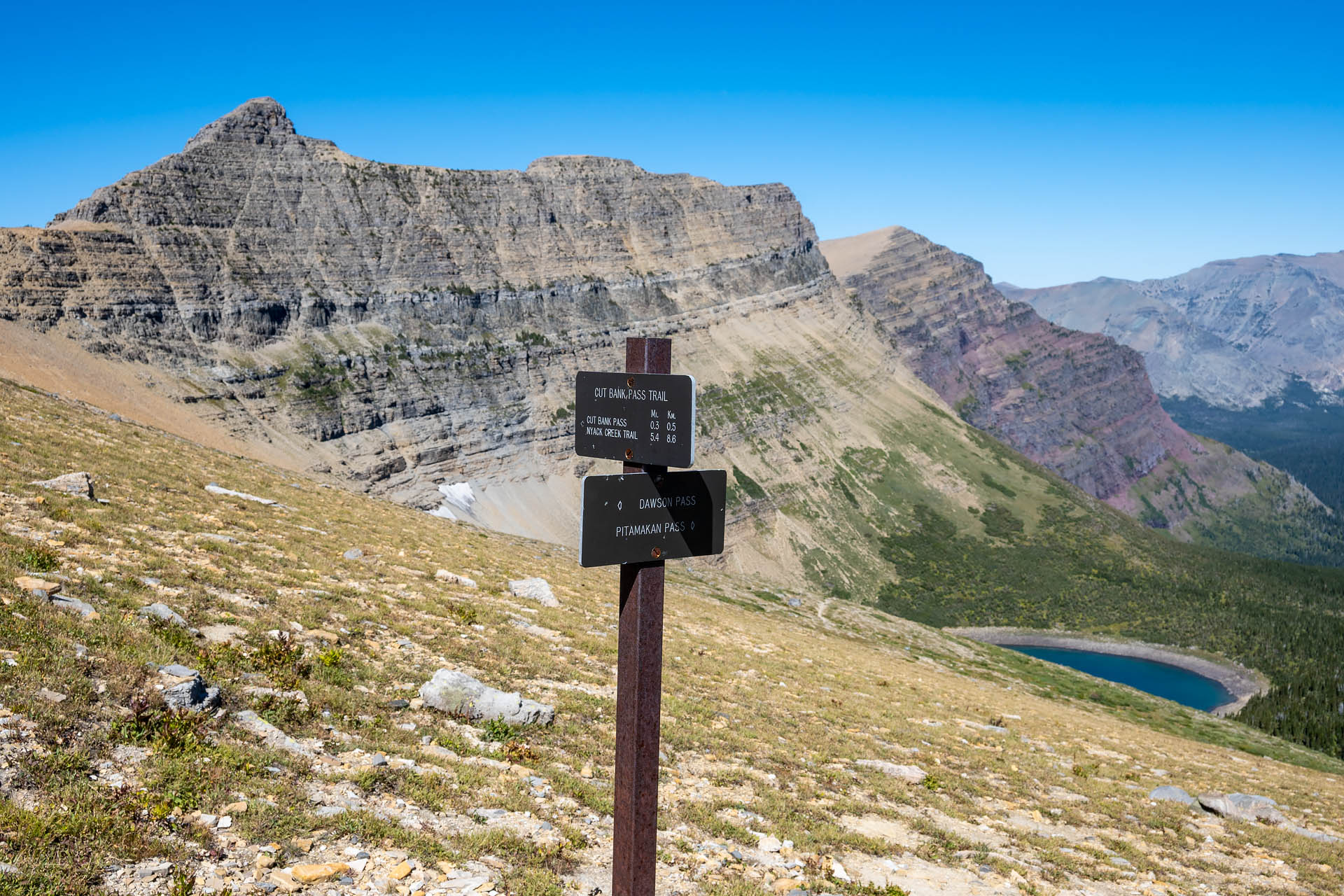 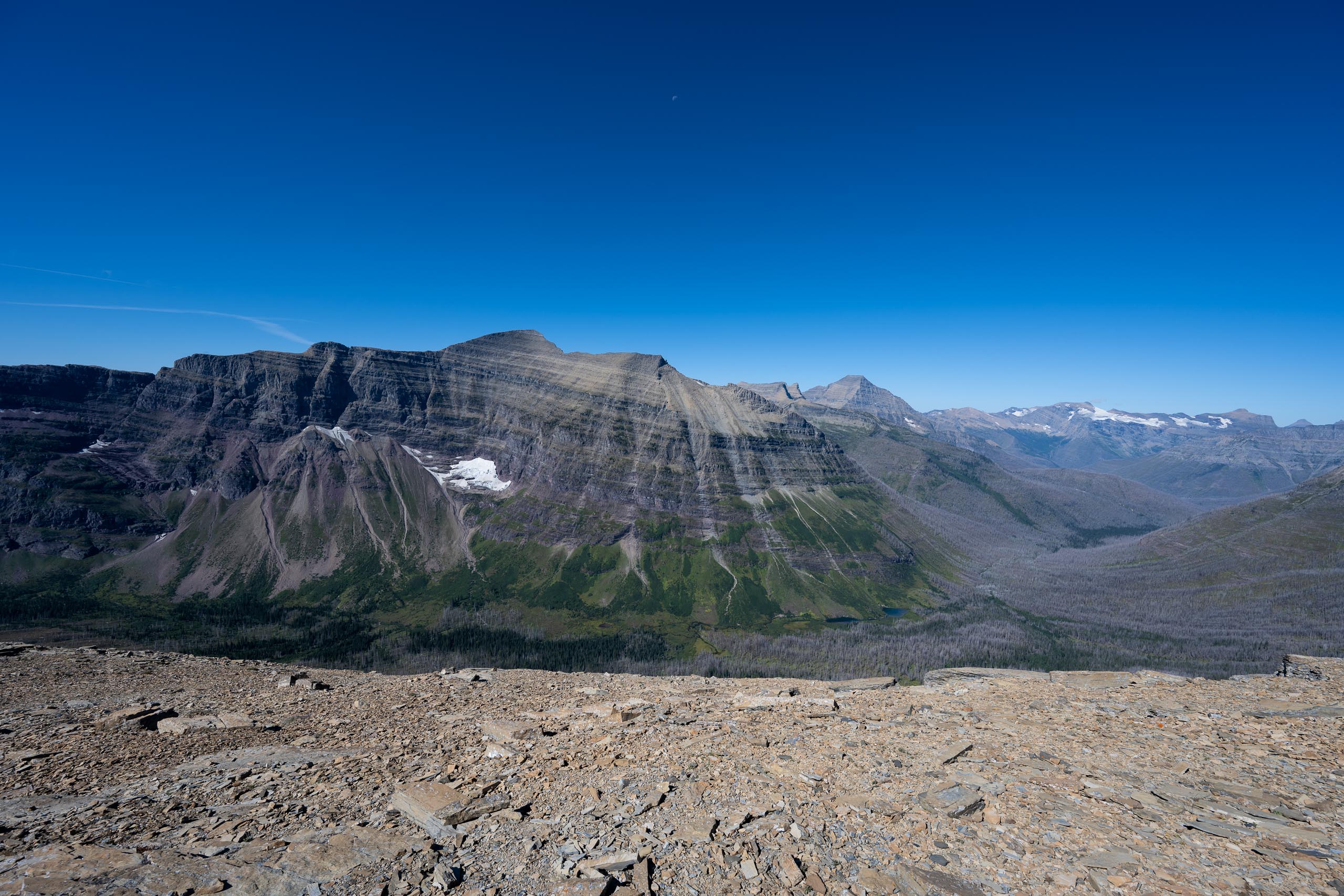 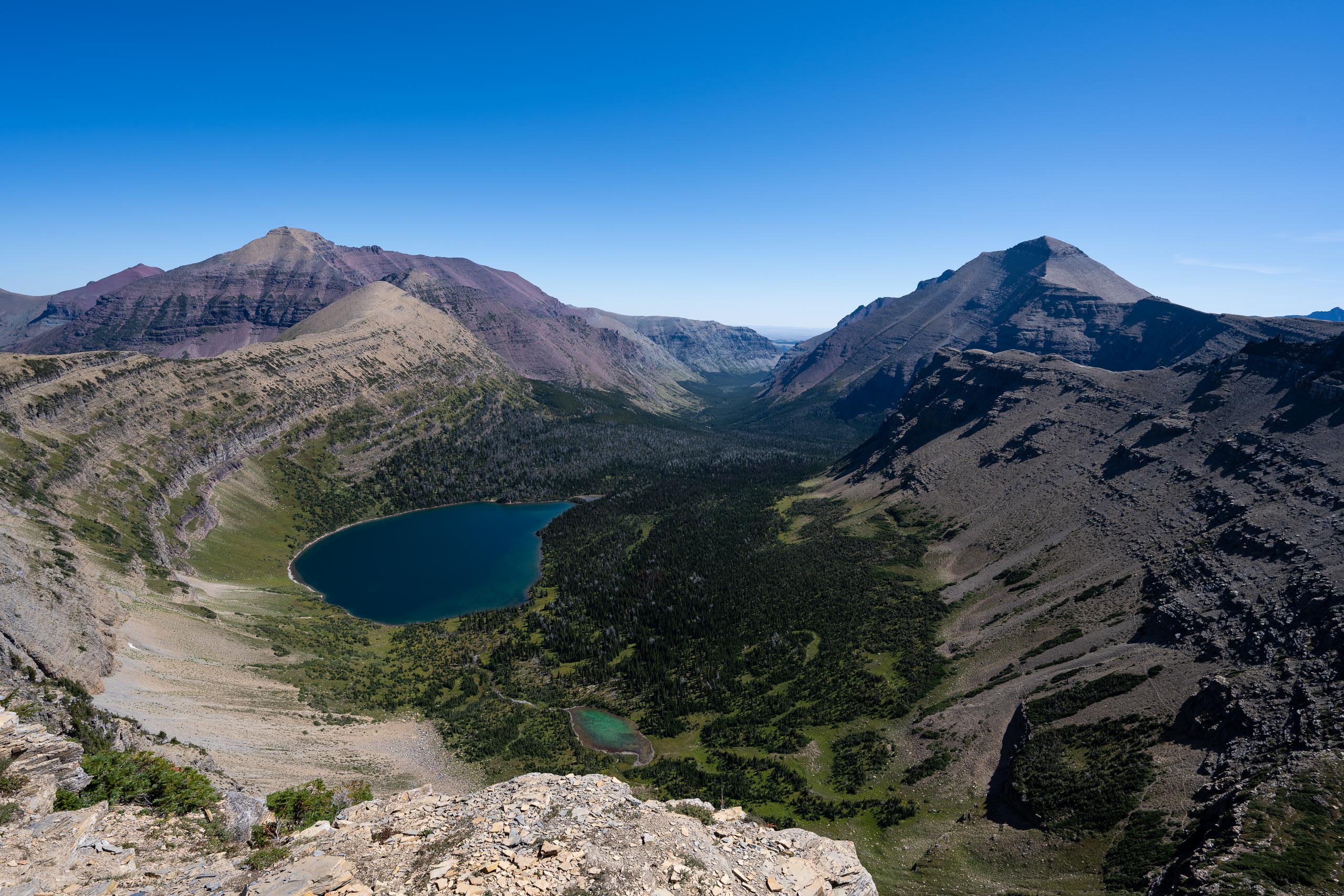 Beginning at the northern end of Two Medicine Lake, this eighteen-mile loop encircles Rising Wolf Mountain – the tallest peak in Two Medicine – and traverses two high mountain passes along the Continental Divide. We chose to hike clockwise simply because we prefer to ascend the steeper portions of trail. However, in terms of views, I can’t imagine direction really matters… it’s going to be ridiculously gorgeous either way.

Before you even step foot on the trail, the landscape is incredible, with Sinopah Mountain, Painted Teepee Peak, and Never Laughs Mountain rising just beyond Two Medicine Lake. The morning light on the rugged summits was beautiful, and made us all the more eager to start out on the trail. 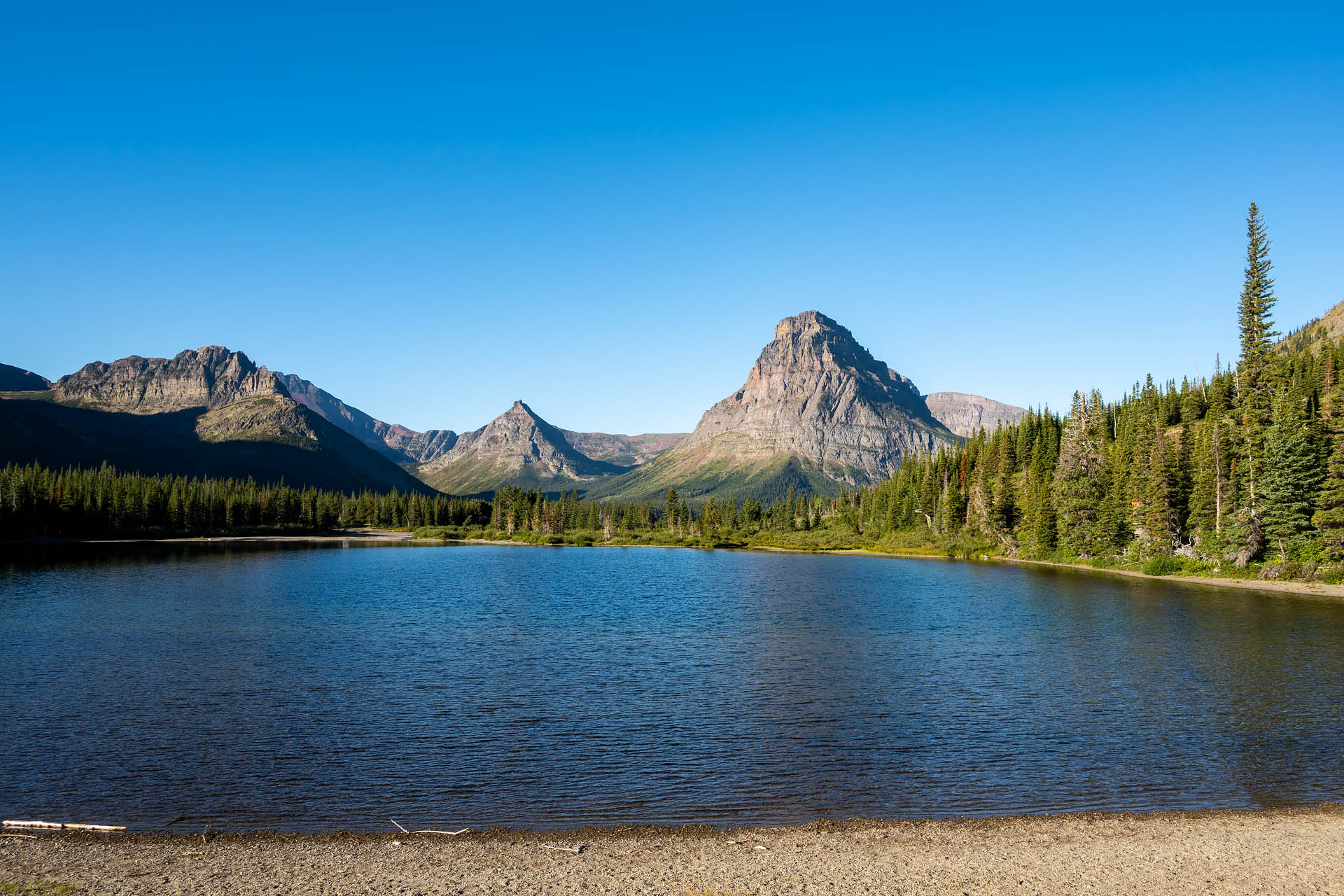 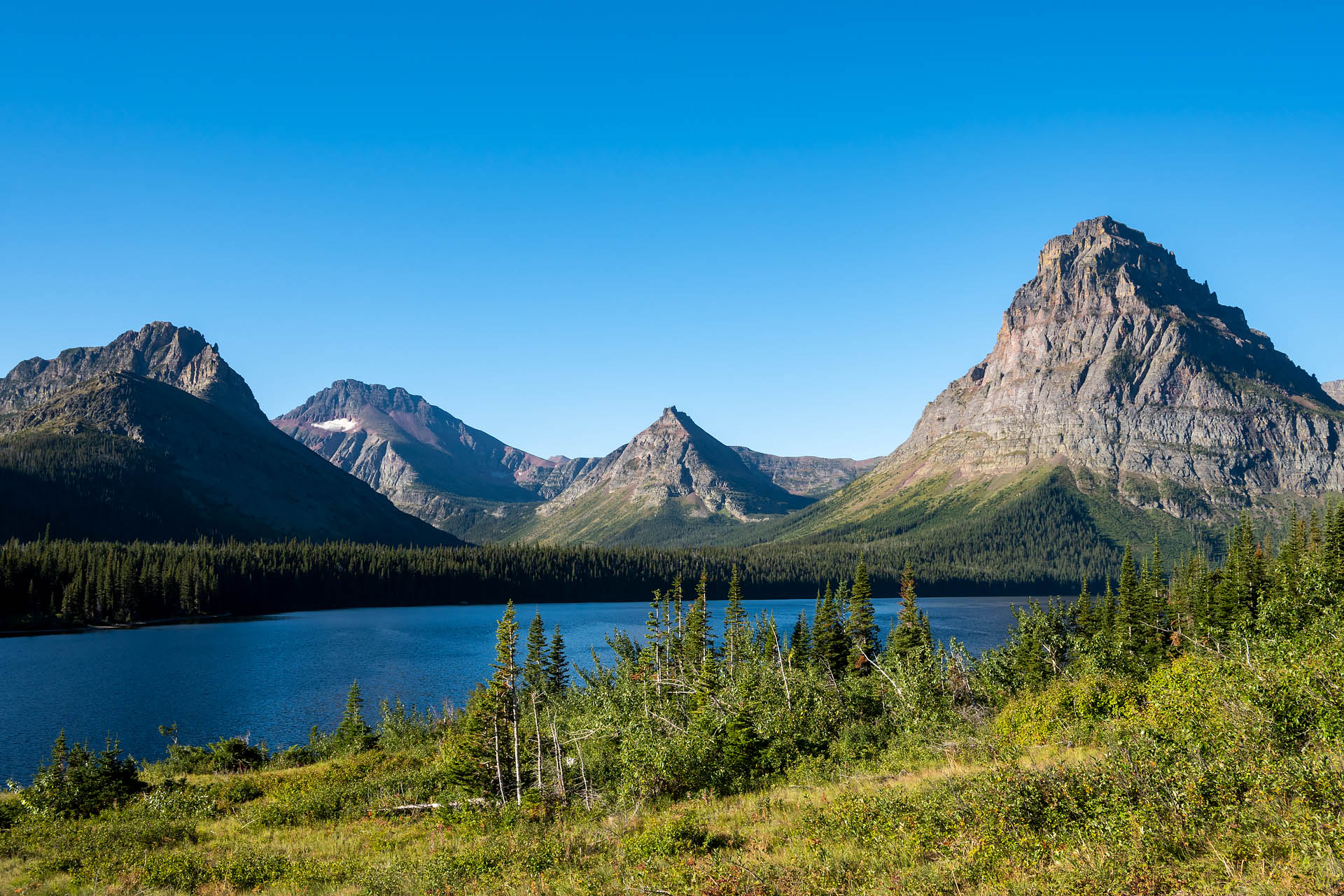 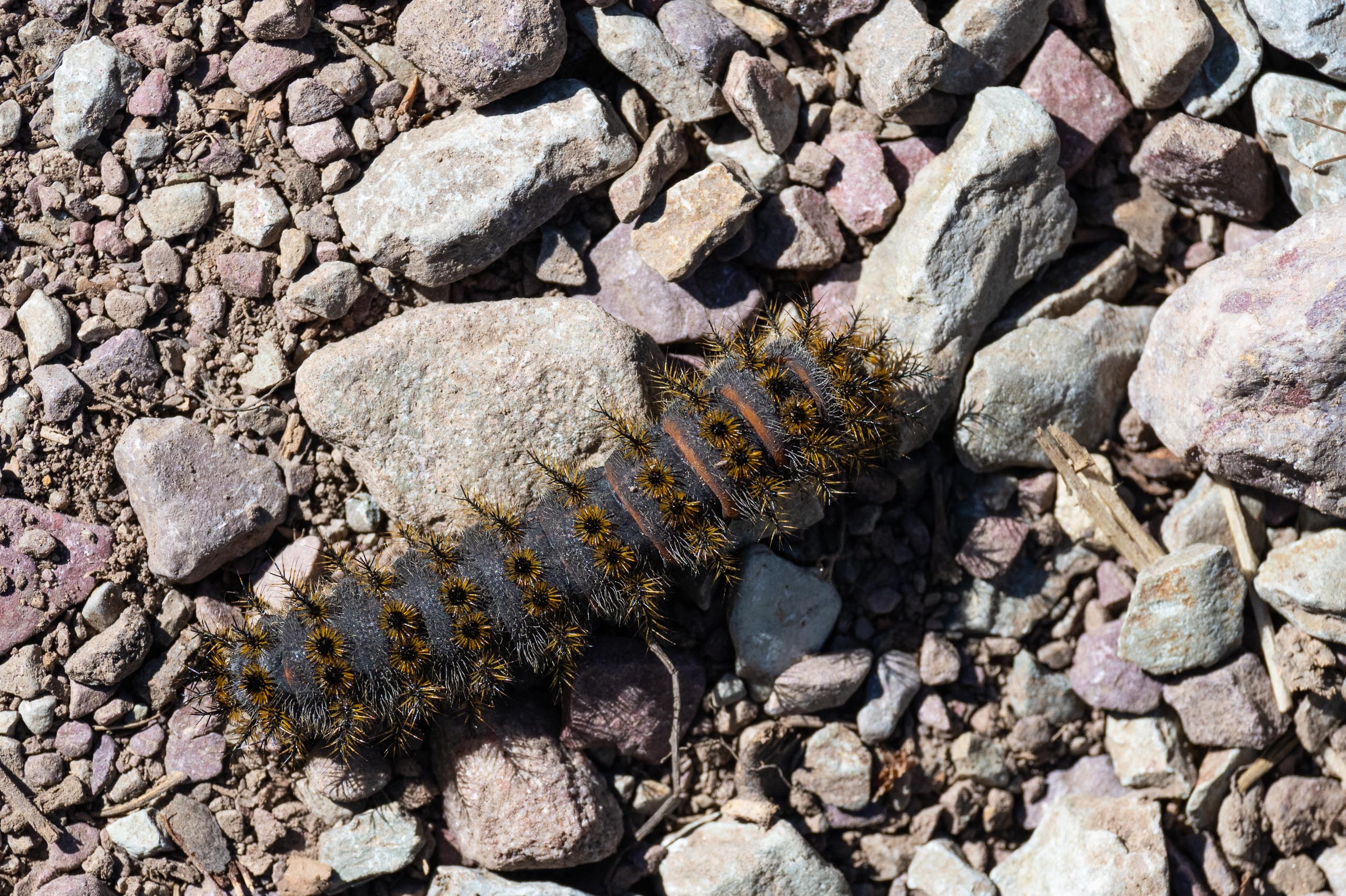 The first three miles of trail is virtually flat and traverses a thick forest on the northern side of the lake. As we navigated this section, we spotted a black bear just ahead of us on the trail. It was the first bear we’d seen on a trail at fairly close distance, but he (or she) wanted nothing to do with us and took off running up the hill as soon as we came into sight.

At the end of the lake, the trail begins climbing, gaining about 3,000 vertical feet over the next four miles. The trail emerges from the tree line pretty abruptly, popping out atop Dawson Pass. The views here are sweeping, with Mt. Phillips’ massive crest stretching immediately to the west. Peering down into the valley is almost dizzying, as the hillside beneath the pass just drops away here.

After reaching the pass, the trail climbs moderately for another half mile before gaining an exposed ridge at an elevation of 8,000 feet. The ridgeline here has some fairly gnarly exposure, and stretches for three miles between Dawson and Cut Bank Passes. As the trail skirts the western edge of the massif, it passes beneath the summits of Flinsch Peak and Mt. Morgan. The sheer drop-off to the west offers totally unobstructed views of Mt. Phillips and Mt. Pinchot, rising thousands of feet above the lush Nyack Creek Valley below.

Admittedly, after taking just a few steps, I wasn’t sure I was going to make it even twenty feet out on that ridge. Last summer, I had my first failed summit attempt just a little further west in Montana’s Flathead Range. We were out on a social trail that turned into a needlelike goat path along a sheer scree slope. While I don’t have a fear of heights, I had an unexpected moment of panic and couldn’t take one step further. Stephan helped me backtrack to a point I felt comfortable, and I subsequently broke down in tears over my stupid peanut butter sandwich… which was meant to be a summit reward. To say I don’t take failure well would be the understatement of the century, and it felt so demoralizing to not make the top. I don’t know exactly what happened that day; but in the year since, I’ve struggled to get out of my own head on a handful of super exposed trails.

With that unremitting lack of confidence and general disgust with myself, I now found myself out on this narrow path with an incredibly sheer drop-off to the left. Unlike some other summits we’ve hiked, the ground here was at least stable, so Stephan managed to coach me out a ways. When I looked ahead at just how long this ridgeline was, I was even more uneasy. However, all I wanted was to get my head back to where it was a year ago when this never would have bothered me. 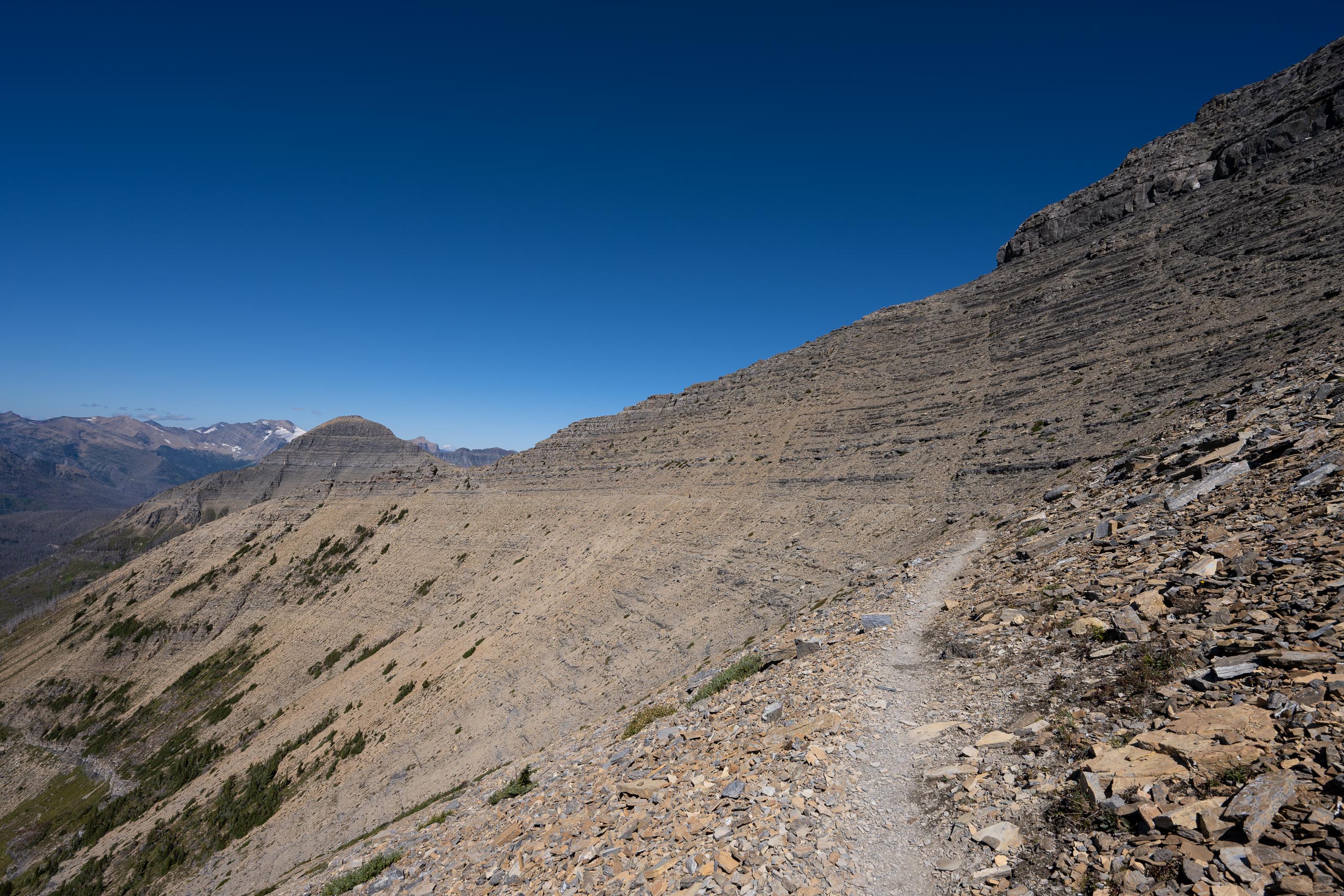 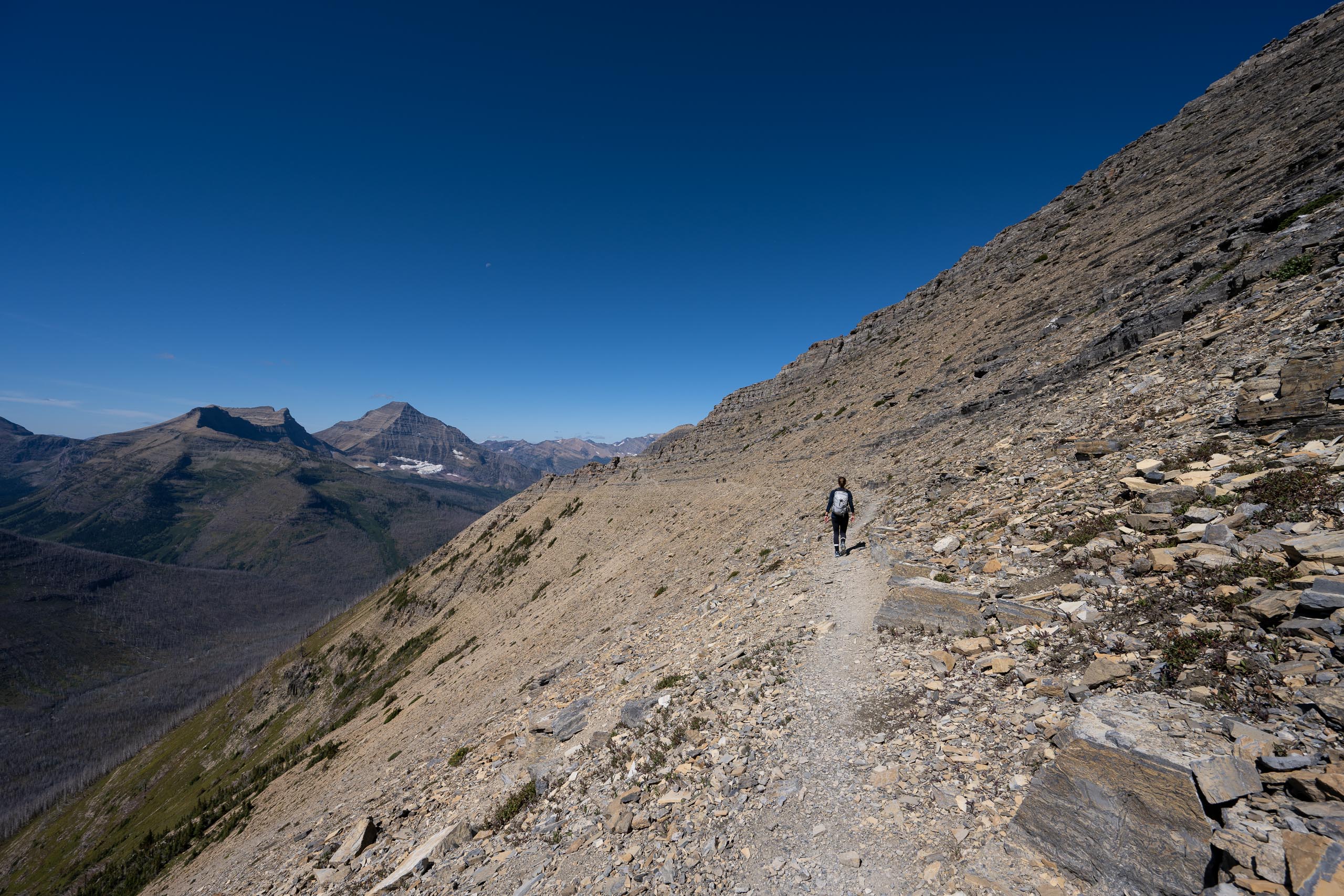 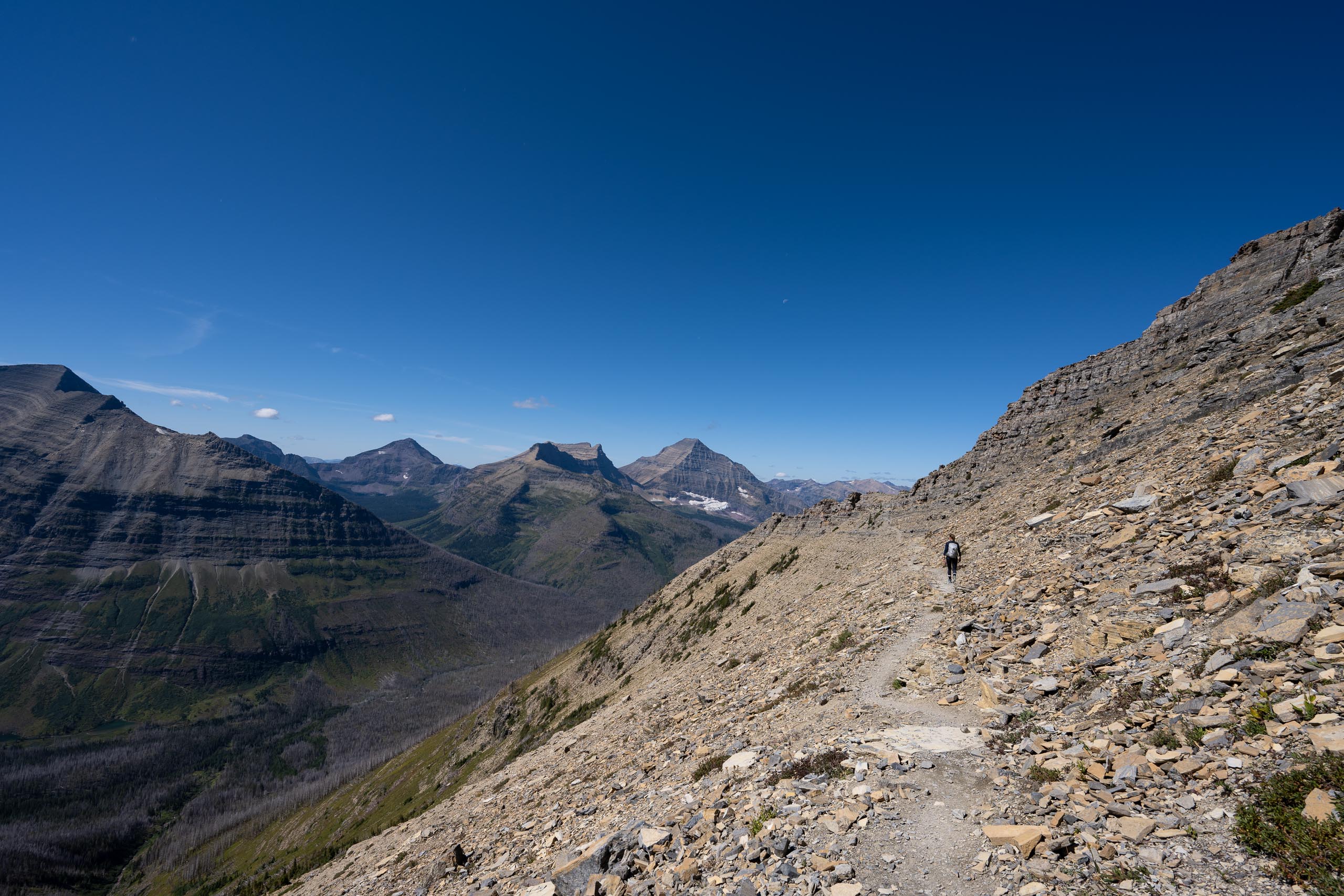 After pushing myself along the ridge for about a mile, we reached a section where the trail widened briefly. It overlooked Oldman Lake, nestled in a verdant basin surrounded by Mt. Morgan and Red Mountain. It was gorgeous, and in that moment I could feel my confidence returning. The remaining two miles were still one hell of a ridge walk, but I was comfortable enough to take the lead for the rest of the way, and I felt like it was finally one major step in the right direction.

About two-thirds of the way along the ridge from Dawson to Pitamakan Pass, we stopped for lunch on a rocky outcropping. The large, flat swath of boulders were part of a ridge jutting out from the west side of Mt. Morgan, and made for the perfect picnic spot with amazing views out to neighboring Mt. Pinchot, Mt. Stimson and Tinkham Mountain. 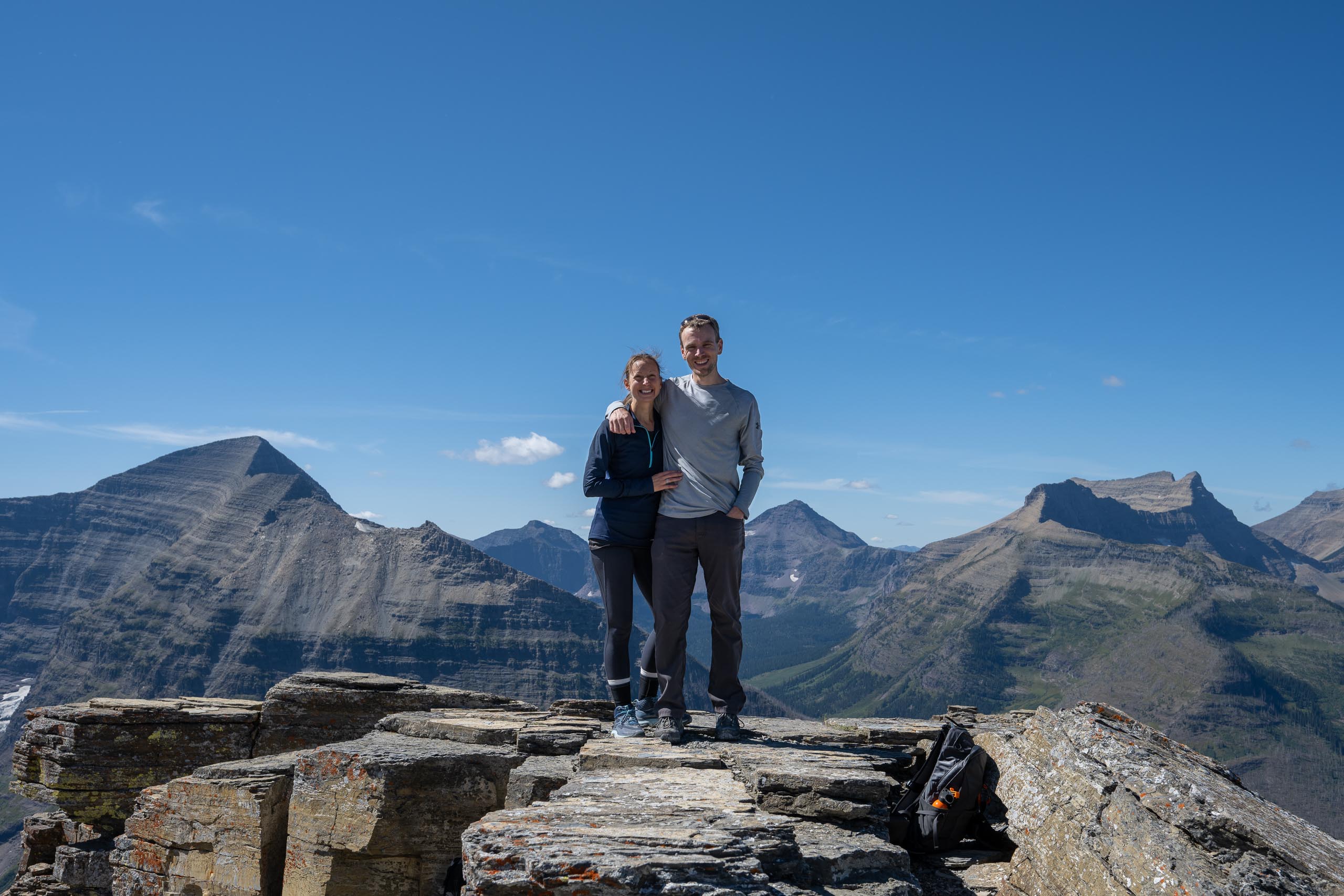 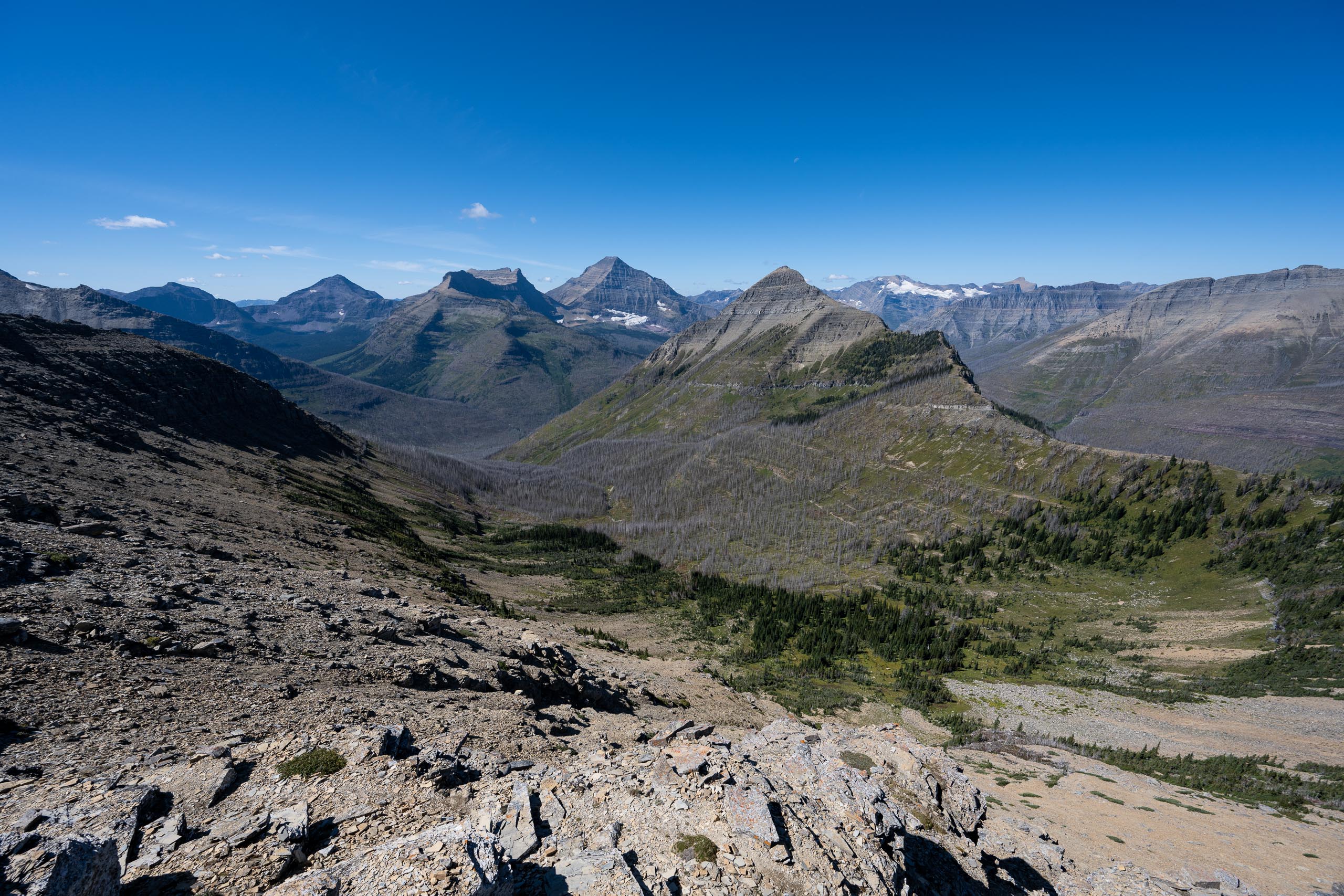 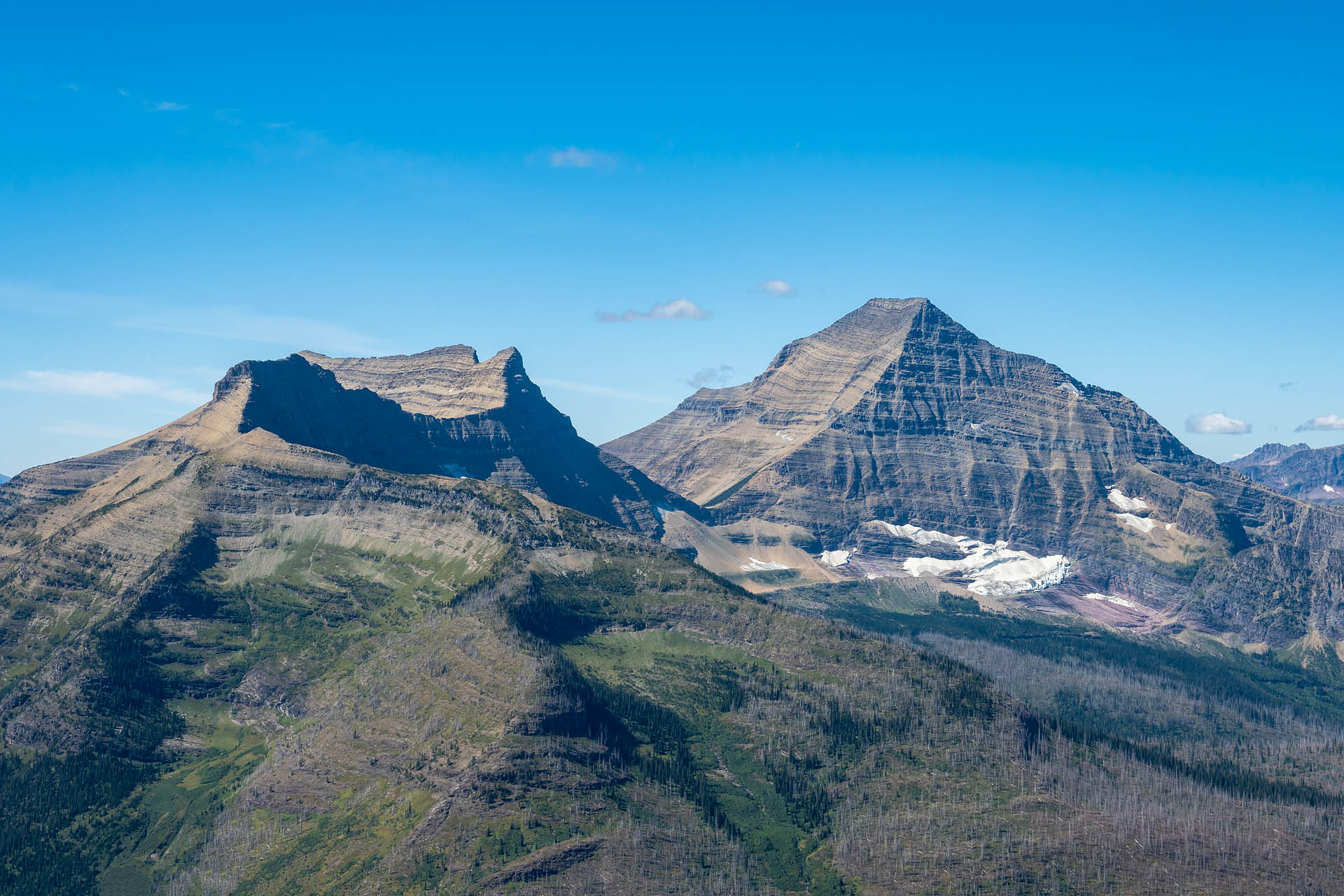 After following the last mile or so of ridgeline, we arrived at Cut Bank Pass. When we thought the views couldn’t possibly get better, we were met with sweeping panoramas of McClintock and Red Mountains rising above Pitamakan Lake (and a neighboring, unnamed tarn).

From here, Pitamakan Pass was visible to the east, less than a half a mile and five hundred vertical feet below. The pass and neighboring lake were named for Pi’tamaka (Running Eagle), whom the National Park Service describes as the Joan of Arc of the Blackfeet tribe. A heroic warrior and hunter during the 19th century, Pi’tamaka defied typical female roles, leading men into battle and even saving the life of her father. Her incredible valor earned her the highest respect of tribal members, as well as the honor of being the only Blackfeet woman to ever be given a man’s name. Today, Pi’tamaka’s namesake pass offers views onto some of Two Medicine’s finest scenery – her eponymous lake to the north and, to the south, Rising Wolf Mountain and Flinsch Peak towering above Oldman Lake. 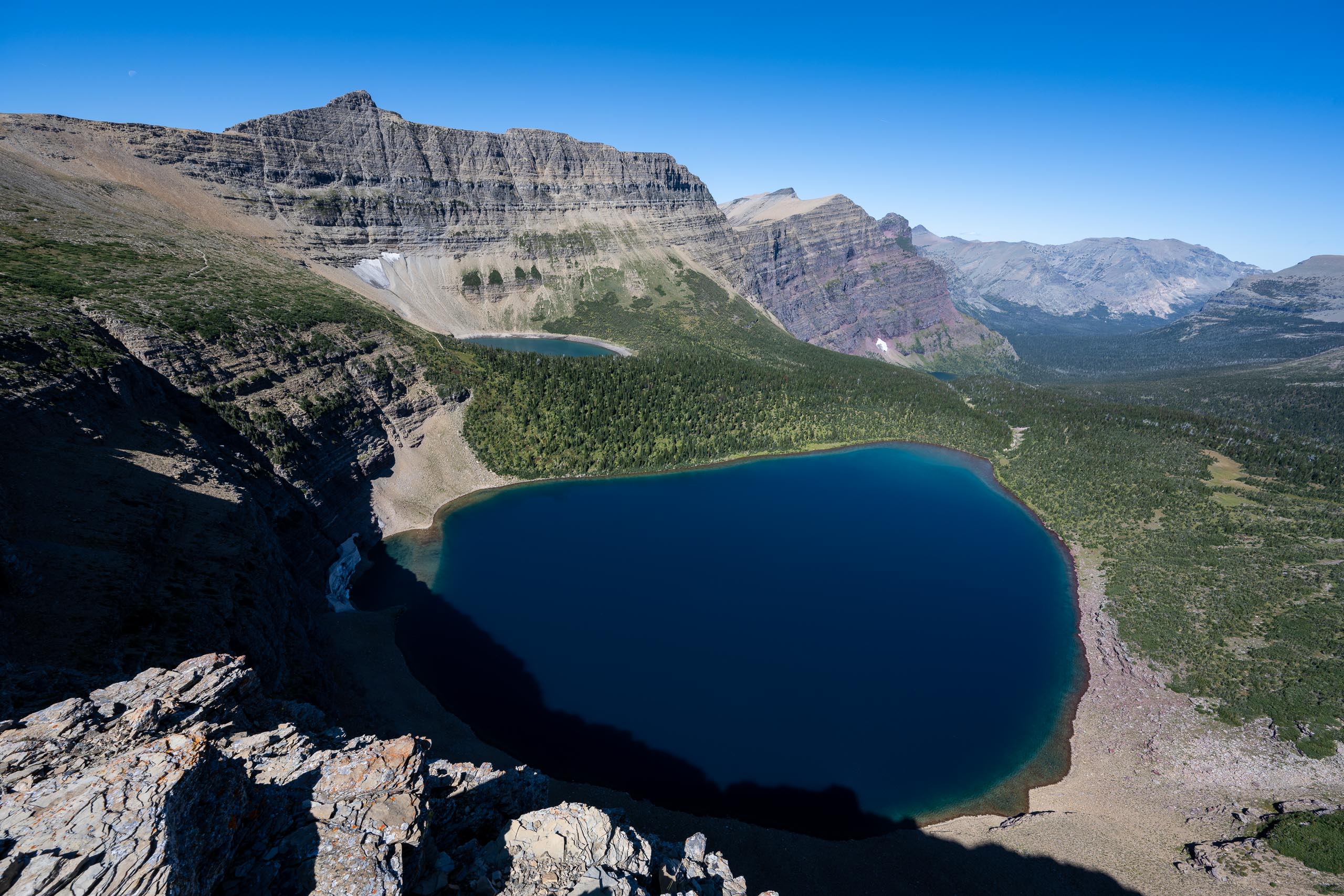 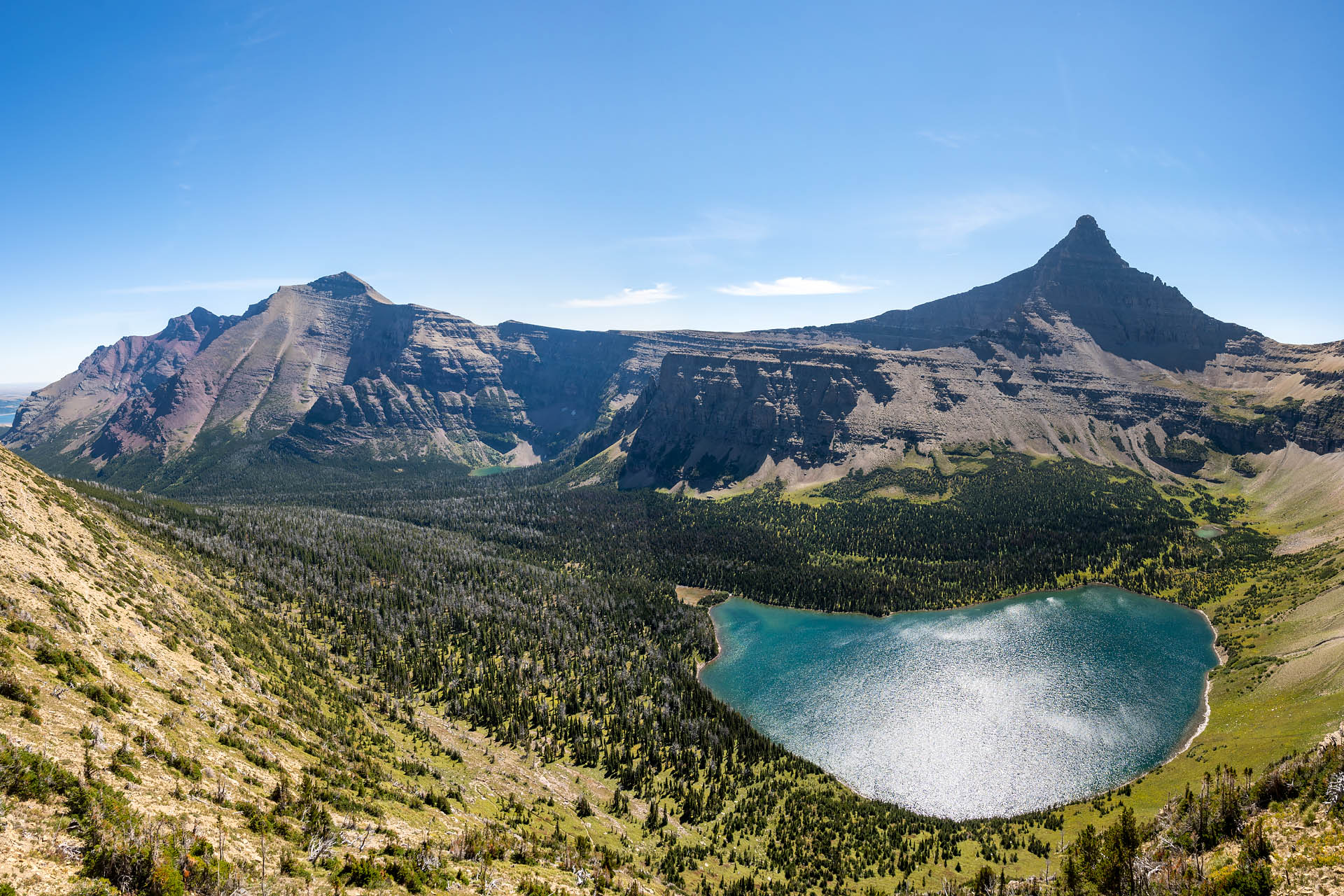 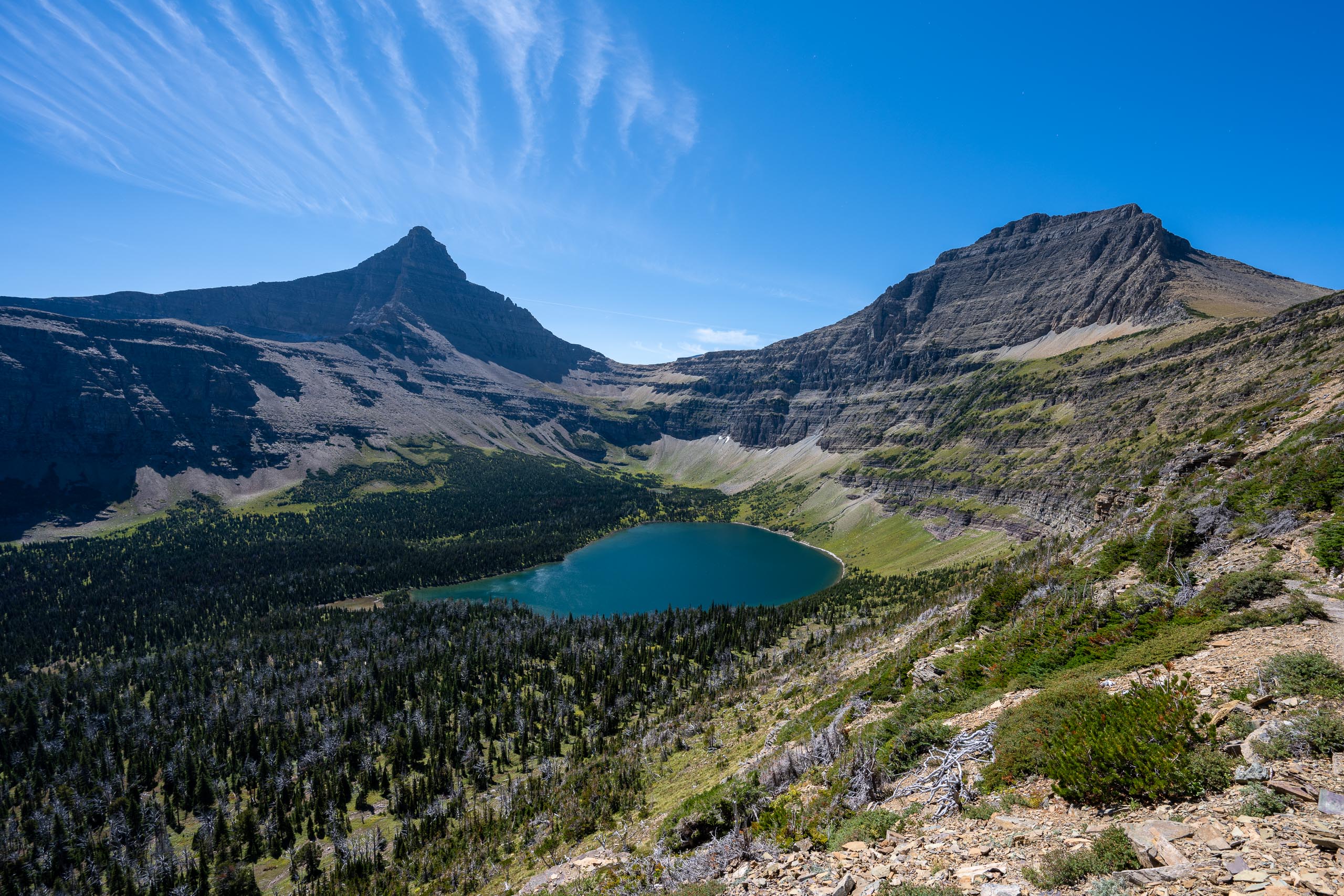 After enjoying our final views, we began our descent from Pitamakan Pass. From the pass, it was about eight miles and 2,100 feet of elevation loss through the Dry Fork Creek Valley to return to the trailhead. 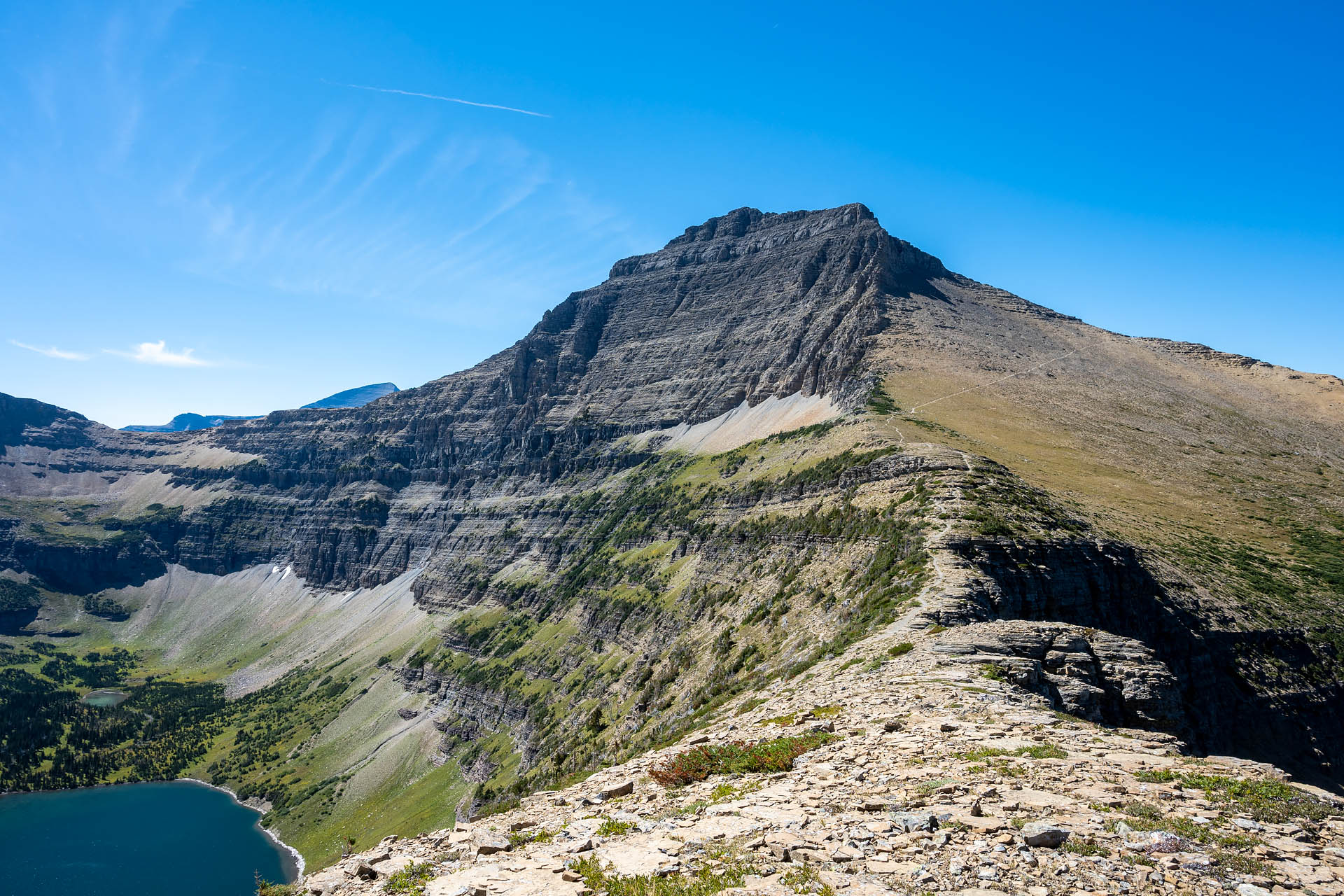 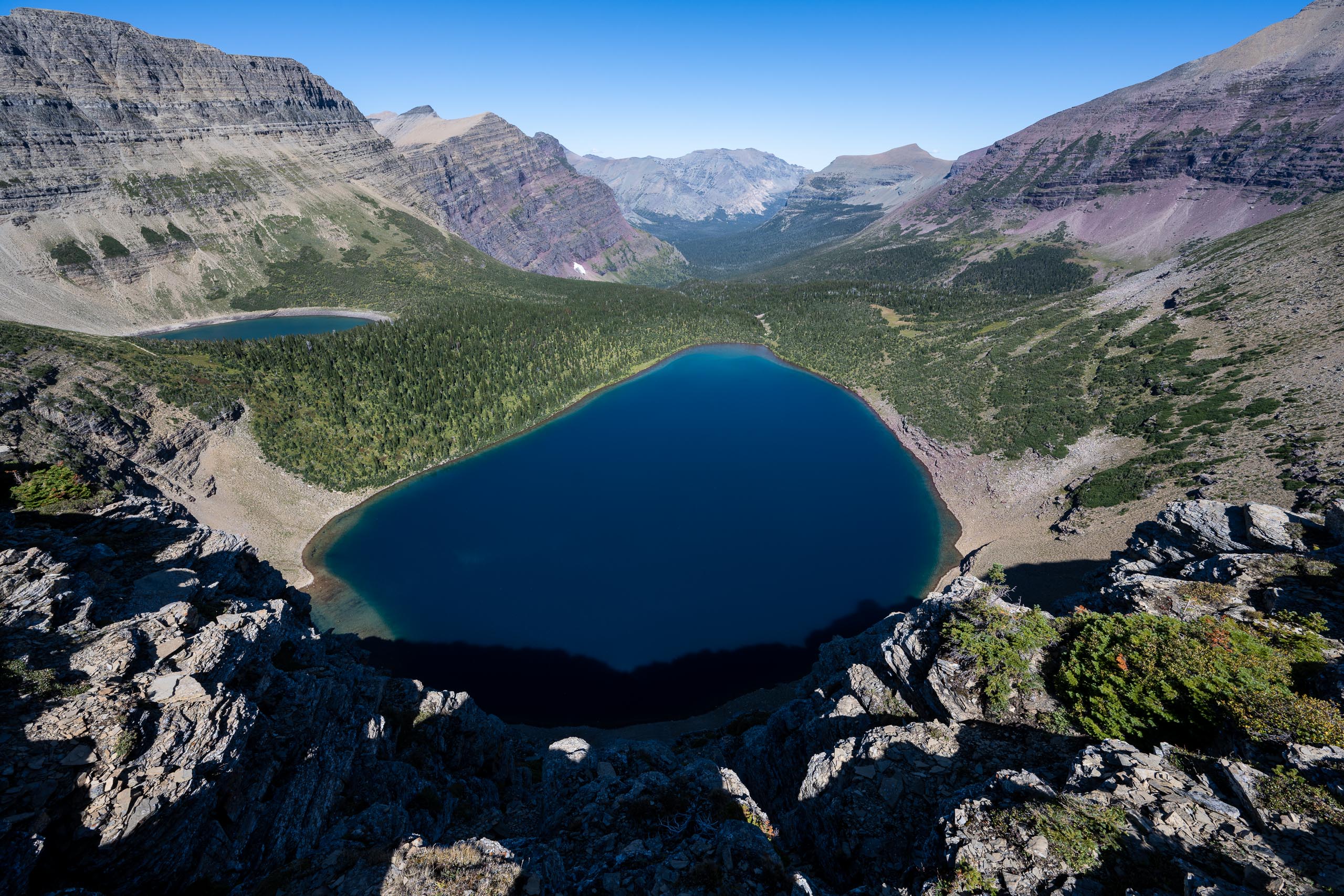 If you’re looking for a longer hike to escape the crowds and see some of Glacier’s remarkable backcountry, this trail is pretty epic. Keep in mind, though, that the three-mile ridgeline from Dawson Pass to Pitamakan Pass has some decent exposure, so make sure you’re not afraid of heights before tackling this section of trail. If you’re in search of a slightly shorter hike with less exposure, consider an out-and-back from Two Medicine Lake to Dawson Pass – about 13 miles round-trip with 2,500 feet of vertical. 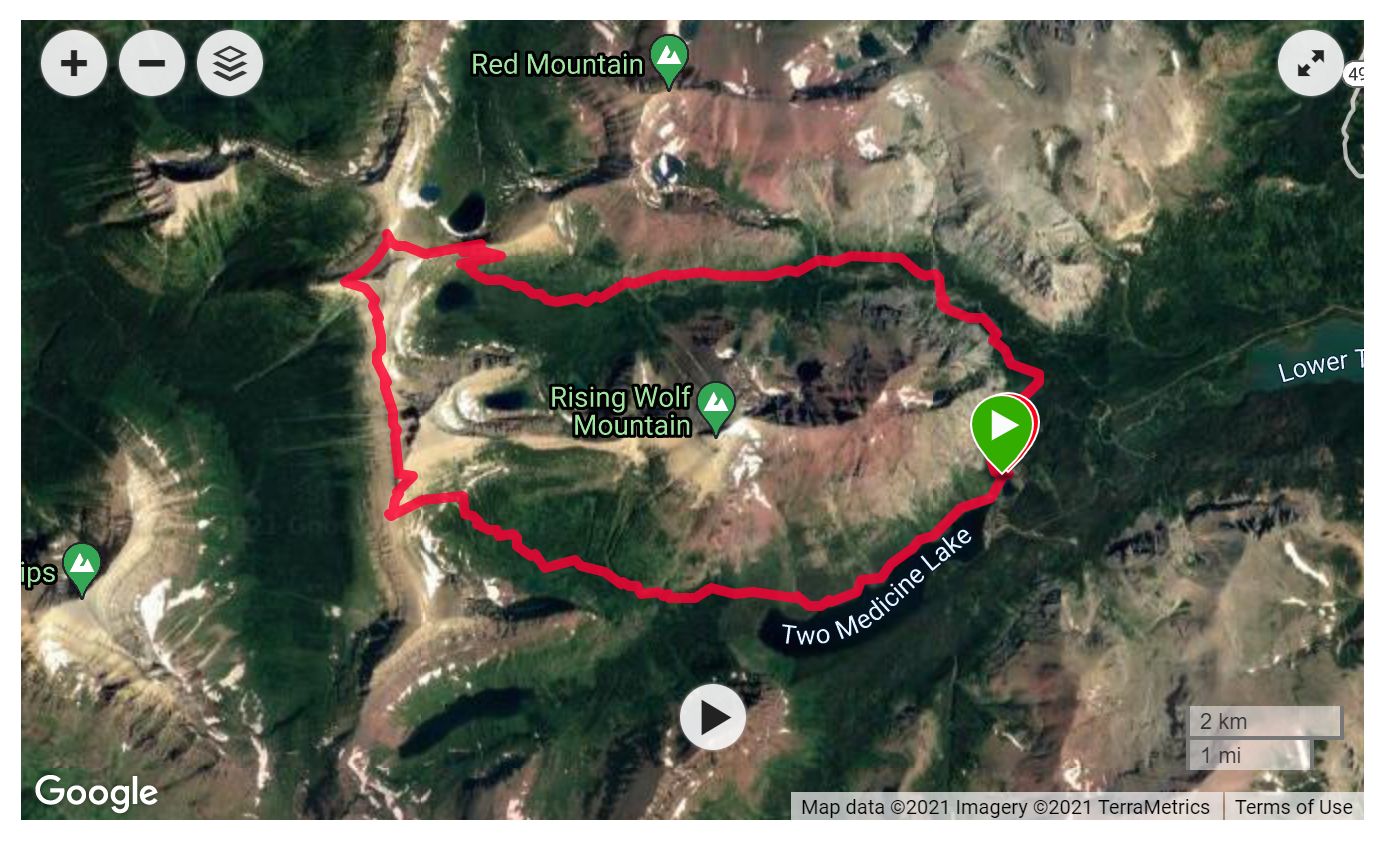