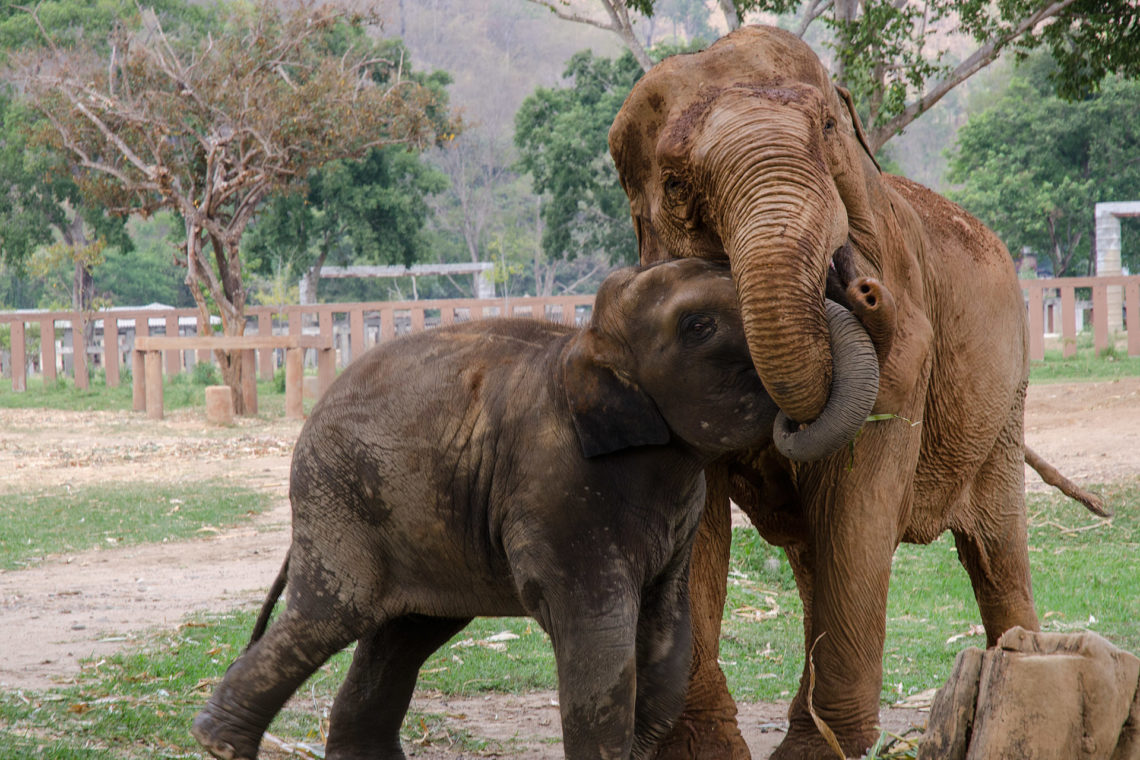 Tucked away in the lush, forested highlands of northern Thailand is a sanctuary that its founder lovingly refers to as ‘elephant heaven.’ Situated about 40 miles north of Chiang Mai, the 250-acre Elephant Nature Park is a true haven for Asian elephants, most who have been rescued from a life of forced labor and heart-wrenching abuse.

In Thailand, the elephant is a sacred animal. But while nearly every temple, business, and street market is adorned with images of the revered creature, this celebrated culture is riddled with duplicity and heartbreak. Each day hundreds of these honored creatures are subjected to unbelievable acts of mistreatment. Previously exploited by the logging industry, a 1989 ban on the trade largely eliminated the animals’ ability to make money in this capacity. Regretfully, though, the focus quickly shifted to tourism, and today, throughout the country, elephants are used as centerpieces for entertainment – in circus shows, for trekking through the jungle, as street beggars and artists in urban centers, and for riding, perhaps the most popular tourist activity.

While it may seem like an innocuous adventure (elephants are significantly larger than a human rider, after all), people fail to consider the larger picture. An iron saddle and multiple riders create an extraordinary weight for even an elephant to bear. The animals are endlessly hauling the onerous cargo in the unrelenting jungle heat for up to thirteen hours a day so that tour companies can maximize profits, leaving many dangerously exhausted and dehydrated. And finally, because elephants are not naturally inclined to tolerate being jockeyed by an endless parade of human strangers, the animals have to be conditioned to endure this wearying task.

The conditioning and domestication of these large animals comes from a deep-rooted tradition called the phajaan. After tearing young wild elephants from their mothers and family units, the phajaan (or training crush), a veritable torture device, restrains the animal with chains and shackles while the human abusers quite literally beat the animal into submission for days, breaking not only the animal’s emotional spirit, but often crippling its physical well-being. The elephants suffer horrifying pain during the phajaan; some are killed by the unrelenting brutality, while others attempt suicide, either by biting or standing on their trunks. Unfortunately, for those who survive the phajaan, the cruelty does not end. For as long as the animals are confined to a life of work, they will experience constant punishment from their handlers. They will endure painful physical abuse with whips, bull hooks, slingshots, and even sharp objects such as nails and spikes, and their existence will never extend beyond the length of the chains used to imprison them. The torture these animals endure on a daily basis is gruesome and unimaginable. Currently, though, no Thai laws effectively exist to protect domesticated elephants from a lifetime of abuse. Sadly, until such protections are created and properly enforced, the animals’ only hope for liberation comes from a genuine sanctuary like Elephant Nature Park.

The picture below is of Lek Chailert, the sole founder of Elephant Nature Park. A petite Thai woman who grew up in a village of hillside tribespeople in northern Thailand, Lek stands well under five feet tall. Her long, black hair is habitually swept to the side in a tousled braid, and her mud-spattered clothes hang off her tiny frame. She walks with confidence, has a palpable fire in her eyes, and flashes a smile that can illuminate a room. Lek may be small in stature, but her heart is huge and her spirit even more enormous. She possesses an undying passion to stop the plight of the Asian elephant, and exudes strength and tenacity in all that she does. 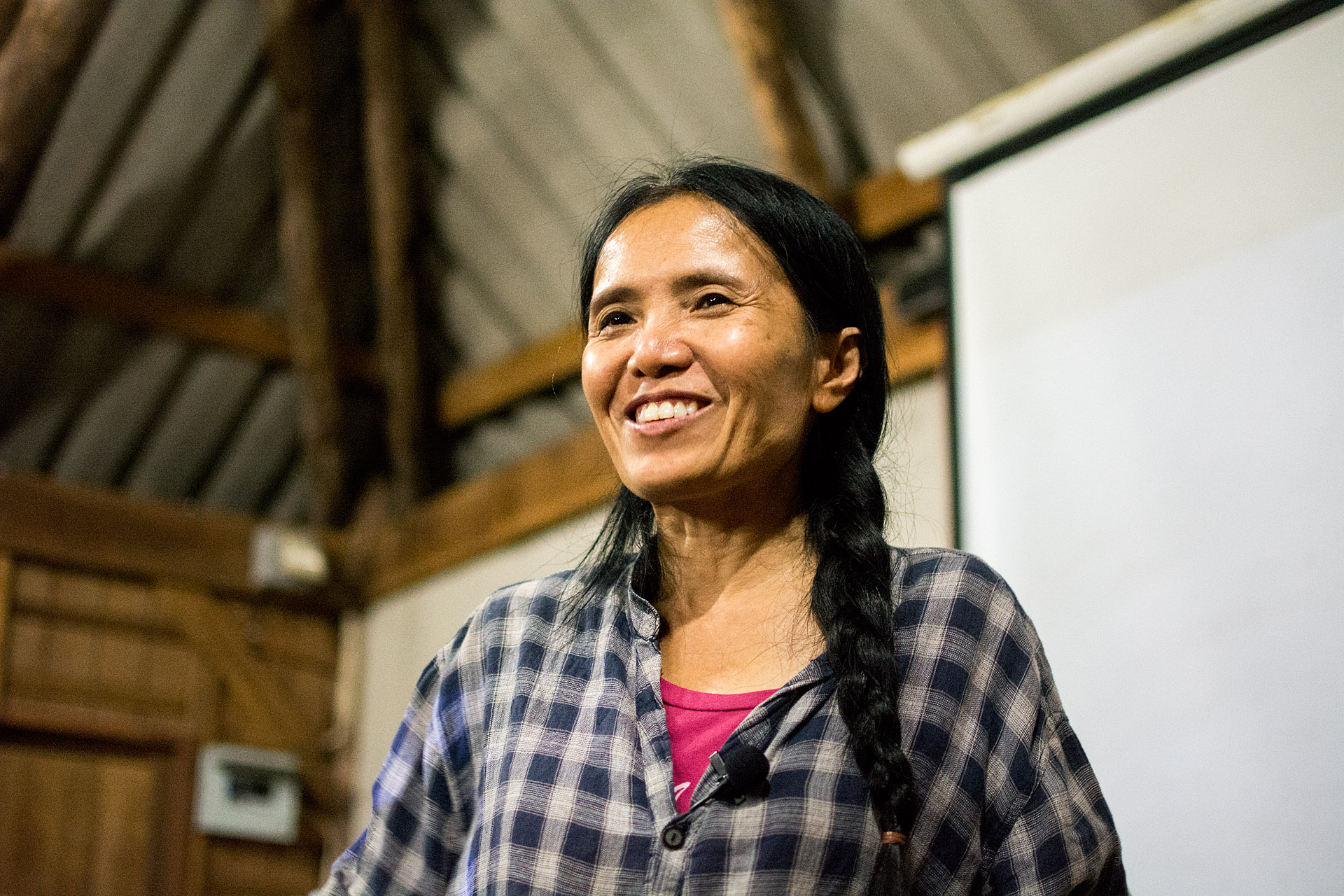 Lek rescued her first elephant, Mae Perm, in 1992 from the logging industry, and worked tirelessly for the next decade to secure the perfect piece of land so she could save more of the brutalized pachyderms. Initially, the local villagers strongly opposed Lek’s venture to open a rescue facility for working elephants. Growing up in a hillside tribe, women filled traditional roles. They were not destined to be leaders, and certainly were not outwardly determined, outspoken, strong-willed, fearless, or controversial. Lek, however, is all of these things. After finally acquiring the land for Elephant Nature Park in 2003, Lek began camping out on the property with her volunteers, and was habitually faced with what she calls “quiet abuse.” Every night, some fifty armed men would storm the property and threateningly insist that she leave. Some used the property for game hunting, some as part of their illegal logging operation, and they were not going to surrender the prized swath of land without protest. While most of us would not consider weaponry to be a passive threat, and would quickly crumble under such terrifying intimidation, Lek is no ordinary woman. She stood her ground unyieldingly night after night until the men finally conceded.

Still, some of the local tribespeople remained suspicious of Lek’s work. They were fearful of the unknown, and didn’t understand this new concept of a sanctuary; to them, elephants were for working, for riding, and for making money. Knowing that she had to first convince them of the benefits to the animals, Lek actually allowed bareback riding of her elephants when ENP began operation. She told the local trekking guides that she would then compare the fitness and well-being of the animals who were sparingly ridden bareback to those carrying an unwieldy saddle for countless hours. The devastating effects of the extra weight and workload were quickly apparent. Although she never had any intention to work the rescued elephants, she knew that temporarily adapting her values was a critical step to get the support she desperately needed to move her project forward. After garnering a bit of support, Lek then went on to hire some of the local Karen villagers to work at the sanctuary, providing a vital opportunity to tribespeople who migrated to Thailand after decades of conflict with the Burmese. She hired elders to perform traditional welcome ceremonies for volunteer workers; she welcomed women specialized in Thai massage to run their business onsite for guests and volunteers, and she allowed locals to open a small gift shop and snack bar. Likewise, many of the volunteer coordinators and mahouts (elephant caretakers) are from the hillside tribes. Further proving her generosity and commitment to supporting the locals, Lek built a school and a library for the villagers with proceeds from tourists and volunteers, to encourage education and to foster successful vocational skills. Lek tells us her story with such conviction and raw emotion, that her heartfelt words bring tears to nearly everyone in her spellbound audience.

Today, Elephant Nature Park is home to 70 rescued elephants. They range in age from 3 to over 70 years, and most have been saved from a life sentence of work in the tourism or logging industries. Roughly 85% of the elephants that arrive at the park are afflicted with some sort of mental anguish from their unspeakable hardship; many have depression, anxiety, emptiness, anger, aggression, or distrust of human caretakers. A handful of the elephants are completely blind or suffer from partial eye loss, from either the constant exposure to camera flashbulbs and circus lights or from damaging impacts from slingshots used during training or punishment. Six or seven suffered debilitating landmine injuries near the Thailand/Myanmar border while being exploited for logging. Some will bear the effects of life-long injuries – dislocated shoulders or fractured wrists that improperly healed years ago – and several remain plagued by lingering mental distress brought on by years of mistreatment. A few even reside in near isolation, requiring extremely delicate care as they are likely to never again trust a human caretaker.

Despite the persistence of chronic injuries, and the mental and physical anguish the elephants were put through during their working lives, they now seem genuinely content – reborn with a renewed life within the protected boundaries of Elephant Nature Park. Here, the elephants are integrated into family units of their own choosing, where they form incredibly deep connections with those in their group. Each elephant also receives specialized care from his/her own mahout, a human caretaker that must be accepted by the animal. The animals will be treated with nothing but love and respect from any human they ever again encounter, and babies born at the park will never be torn away from their mothers or have their spirits broken. Importantly, no elephant at the park will ever spend another minute of his/her life working. While Lek does her best to replicate the animals’ natural lifestyle, she is the first to admit that the park is not perfect. She vows, though, that she will spend the remainder of her days working to create the ideal elephant heaven.

Just what happens at Elephant Nature Park after the chains are removed, and the elephants regain confidence in themselves and their environment? They will create meaningful family groups with their fellow elephants. They enjoy a never-ending ration of their favorite treats. They revel in the freedom to romp through a good mud pit. They delight in a family swim through the river, and are overcome with joy when they discover an inflatable toy. They get to experience the thrill of running through a sprinkler on a scorching, summer afternoon. And most importantly, they will be able to spend the remainder of their days in a place full of love and free of fear. 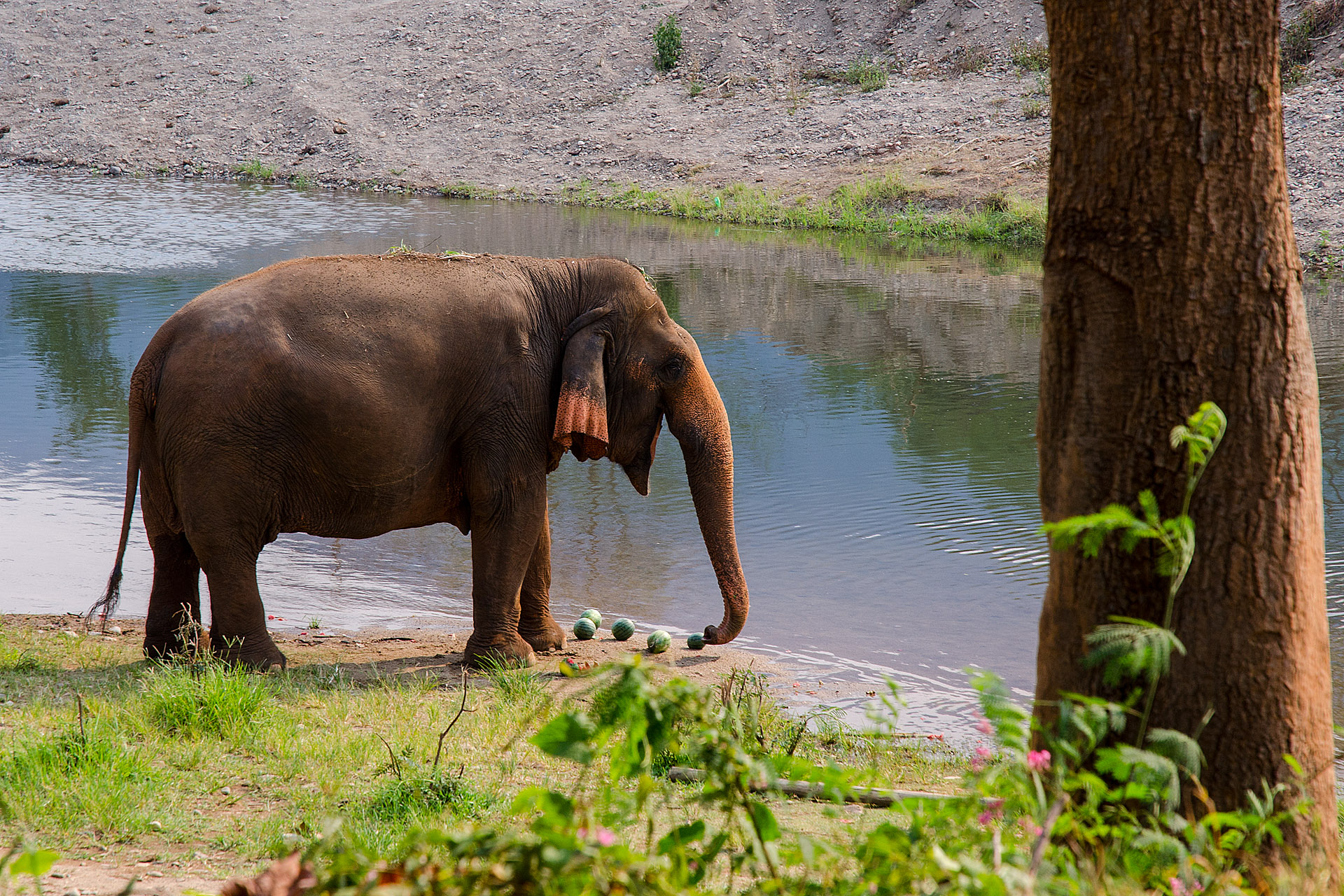 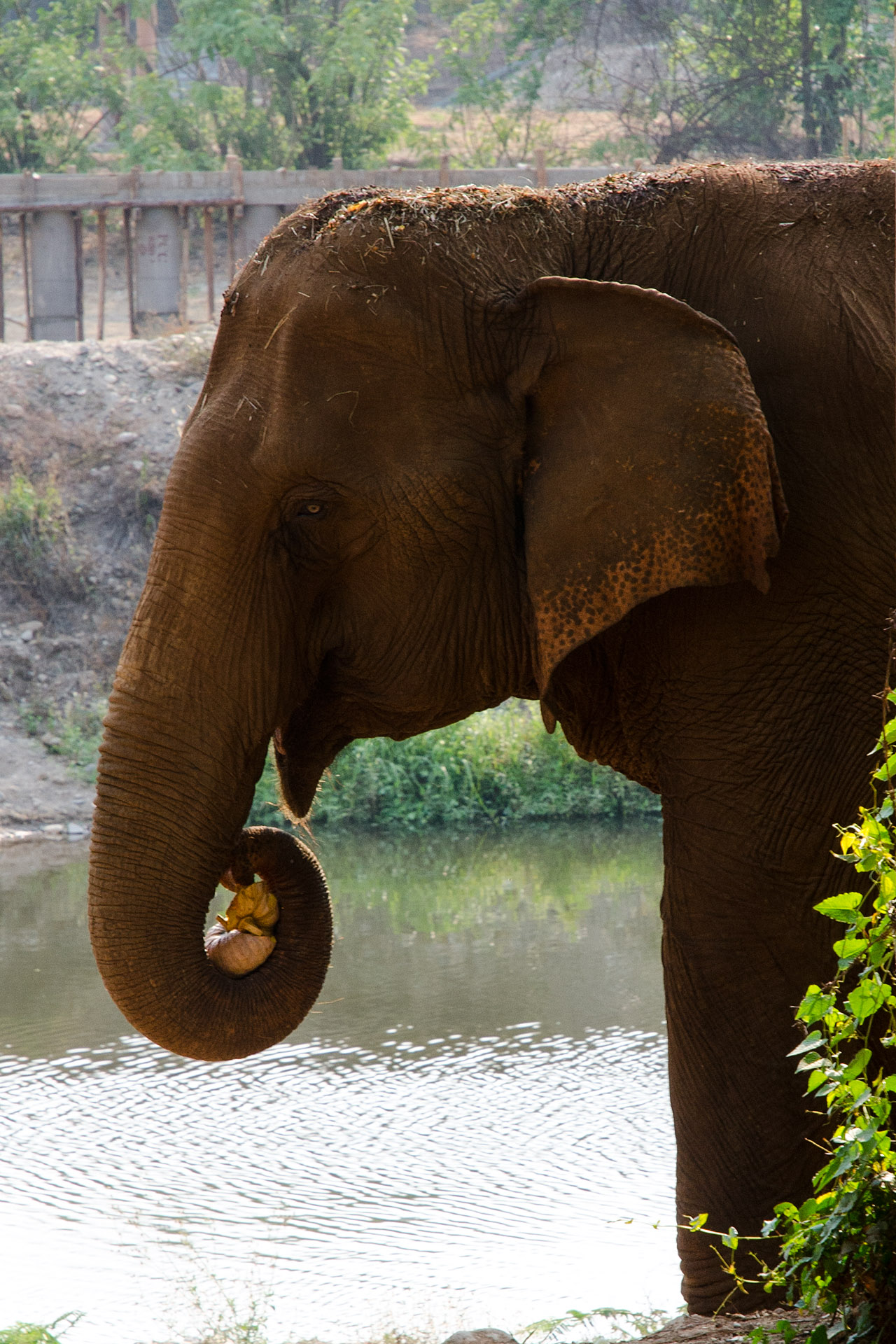 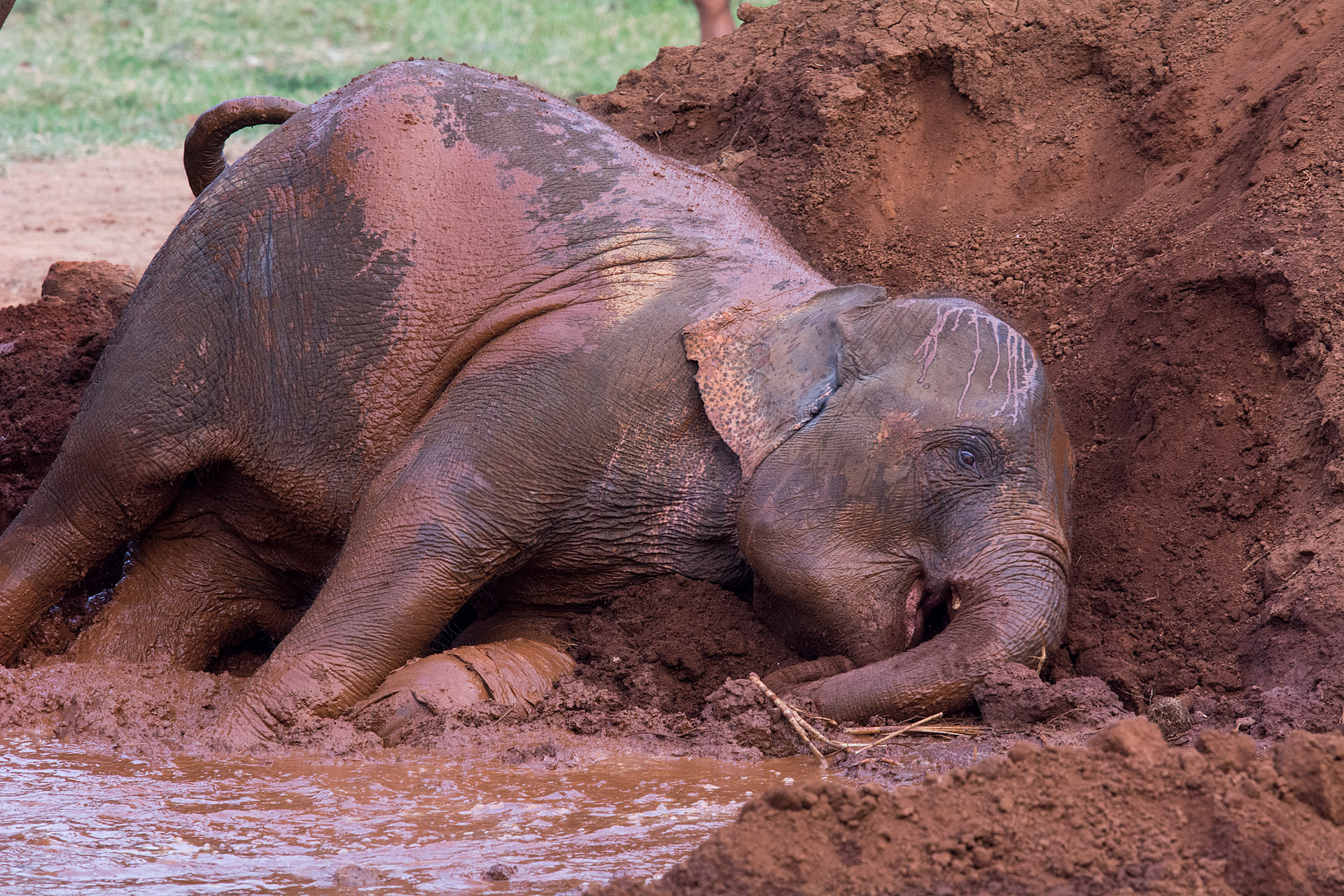 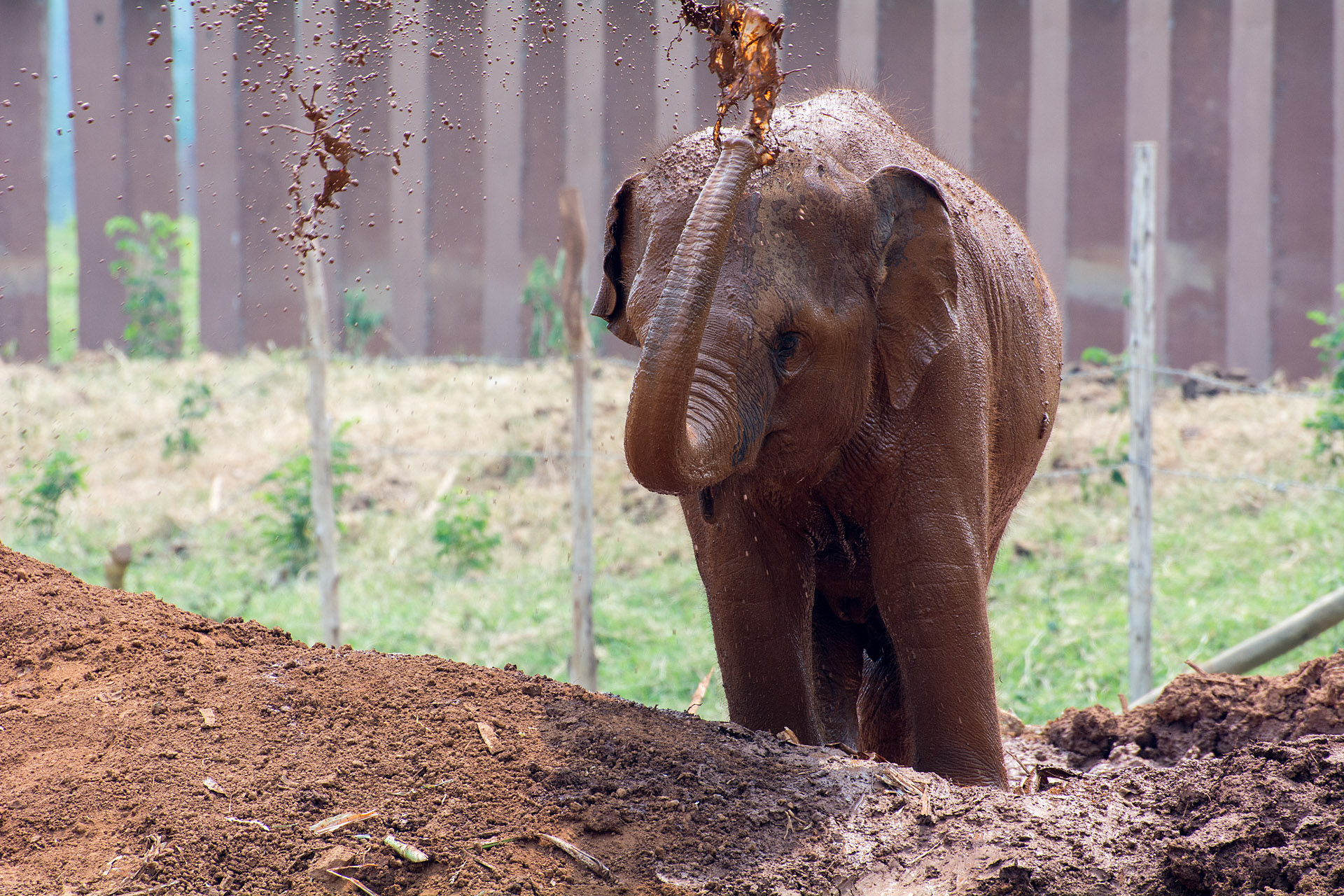 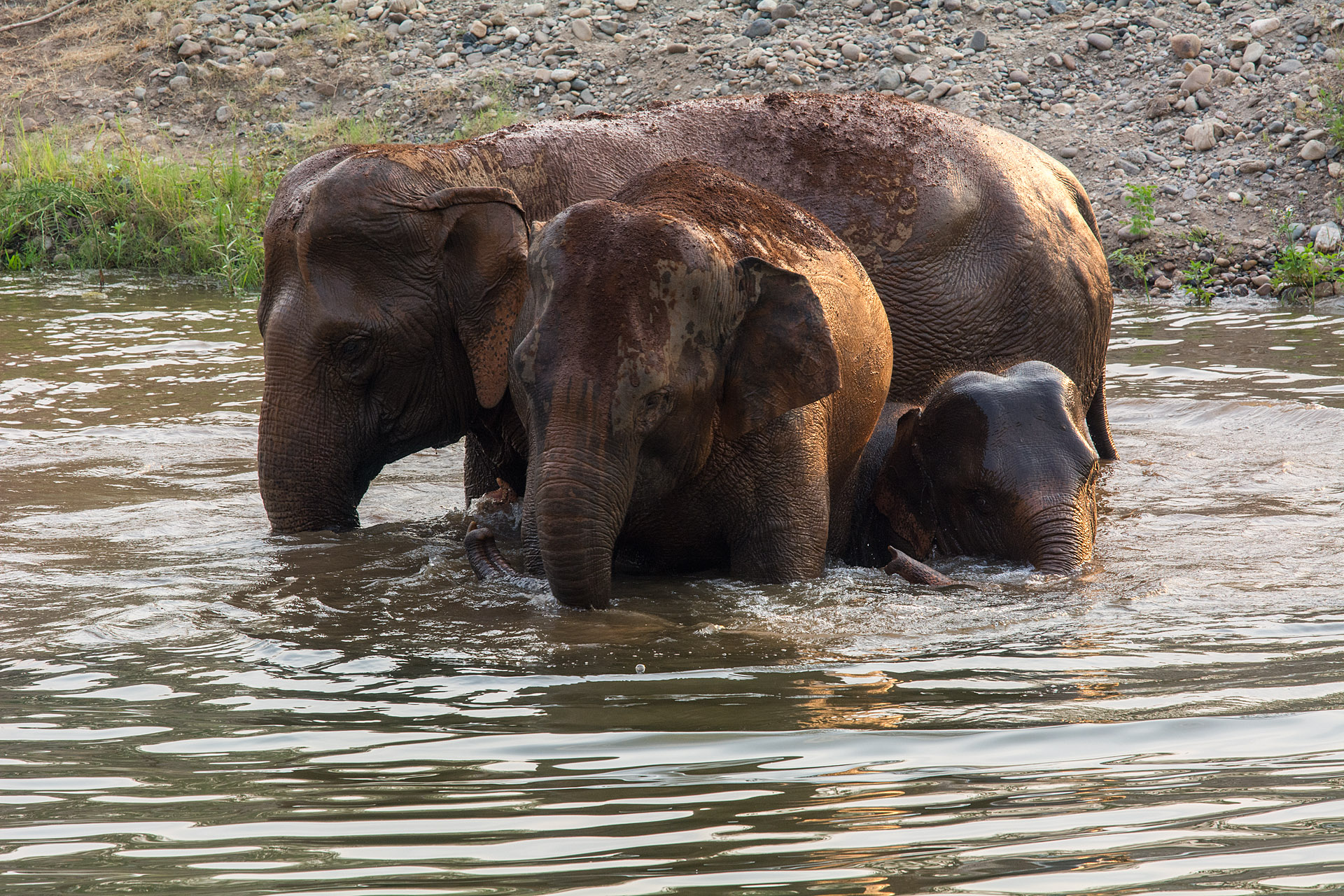 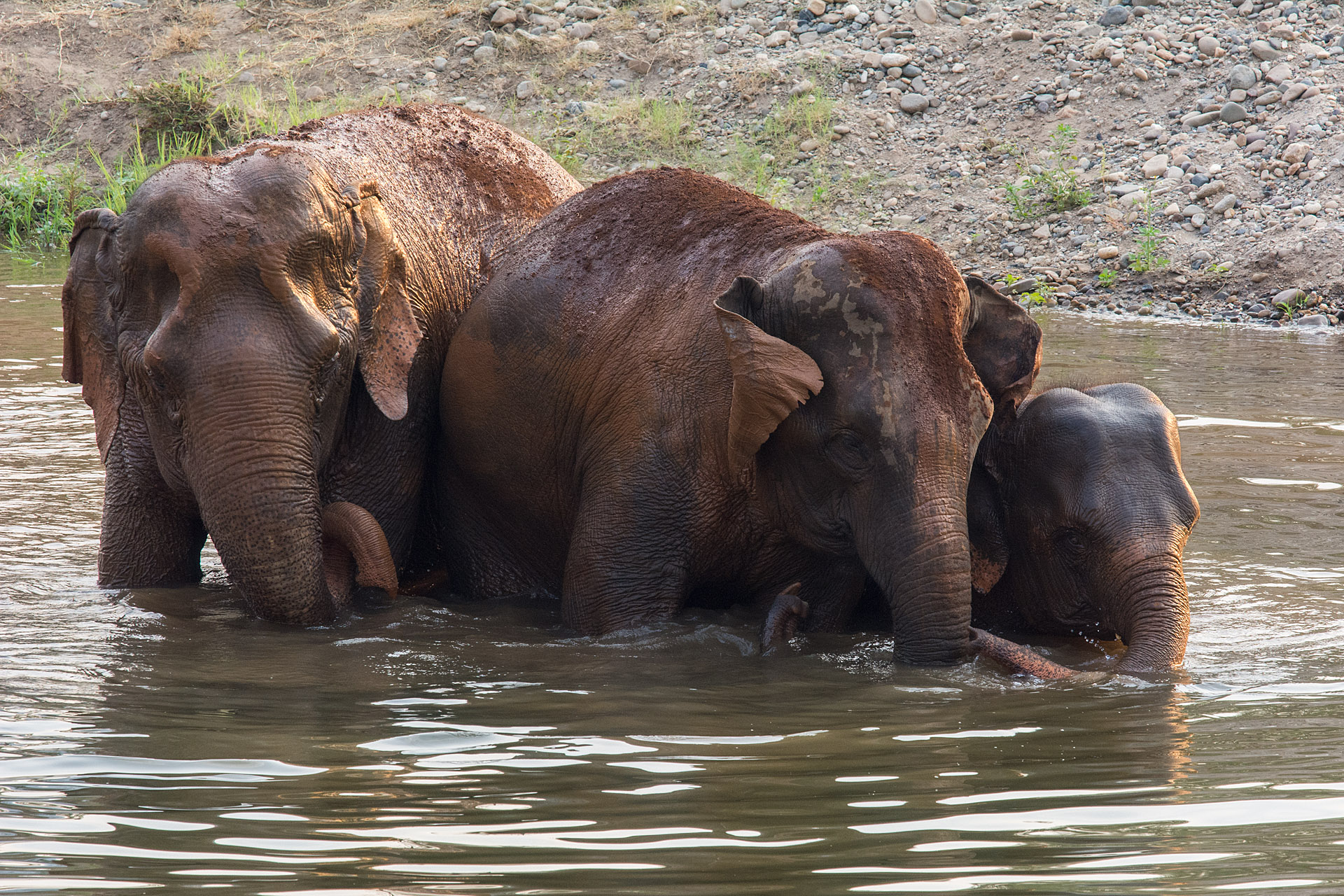 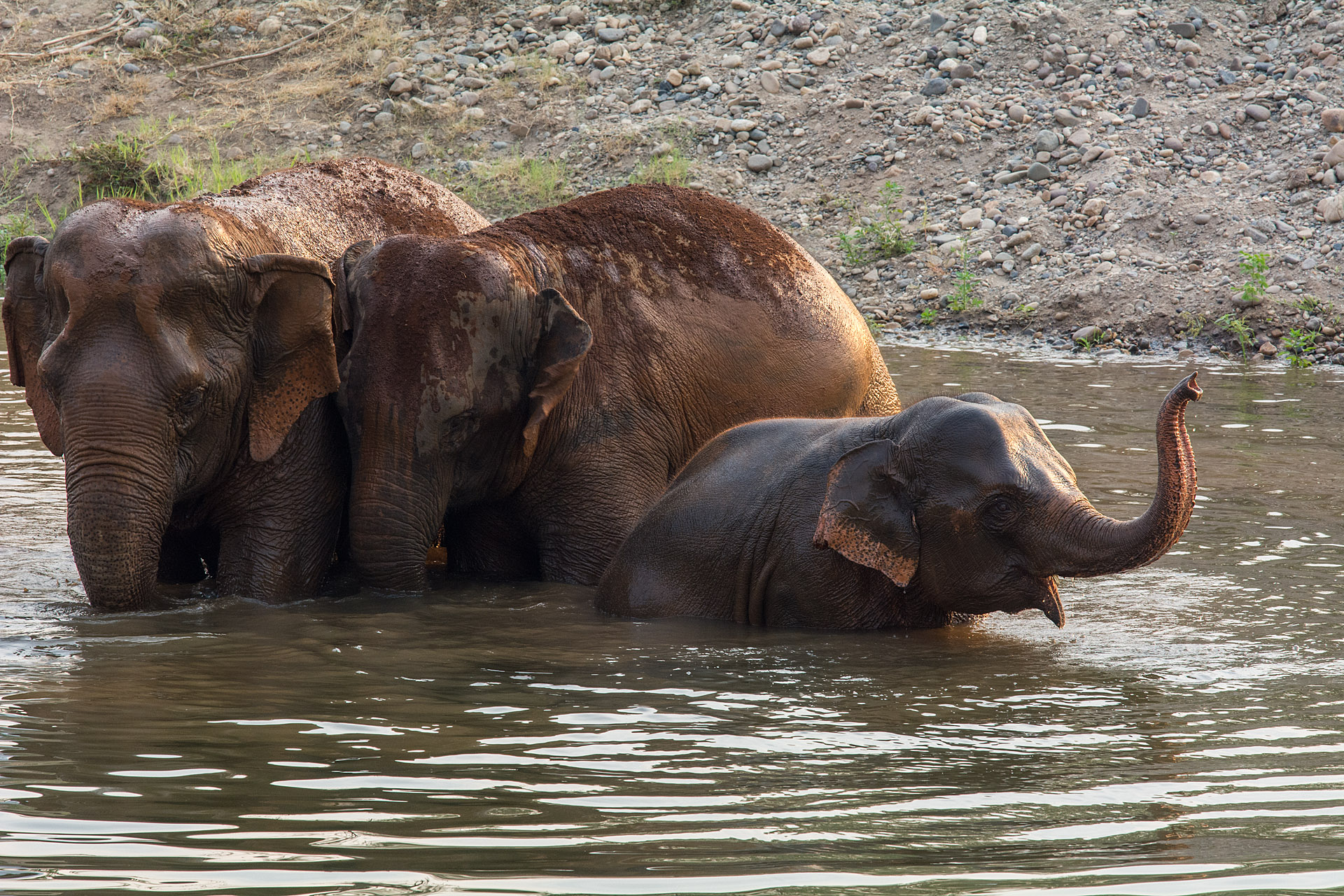 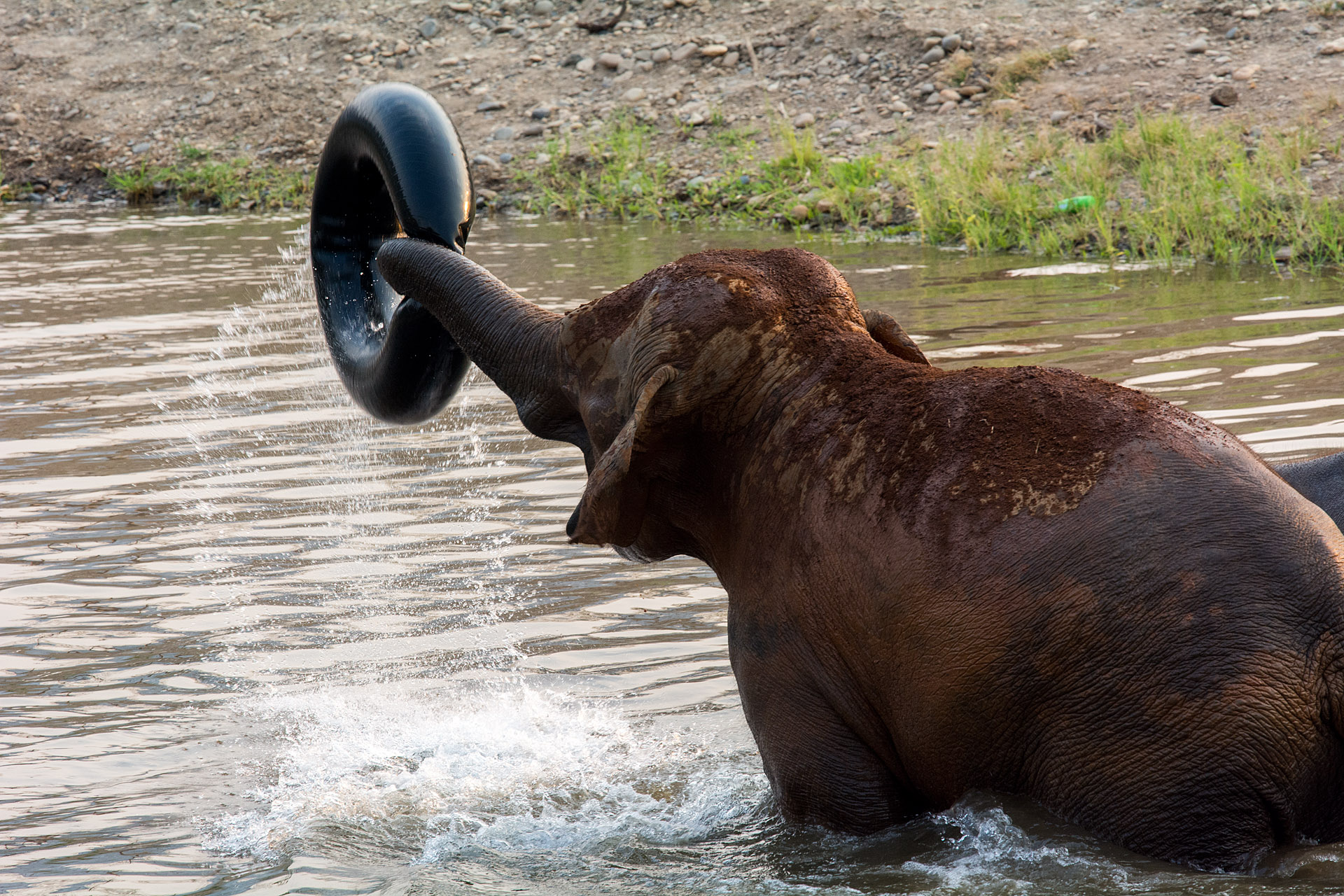 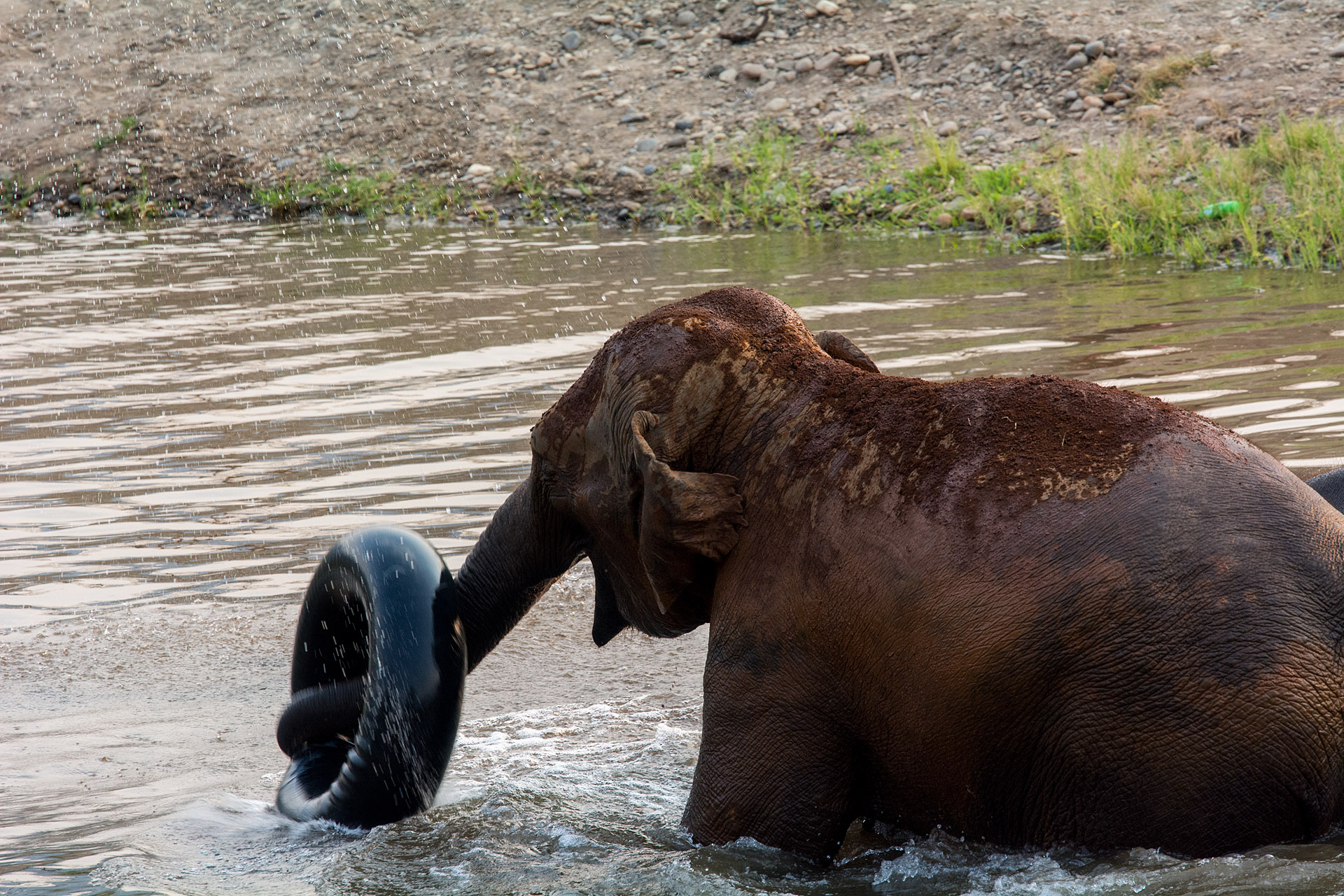