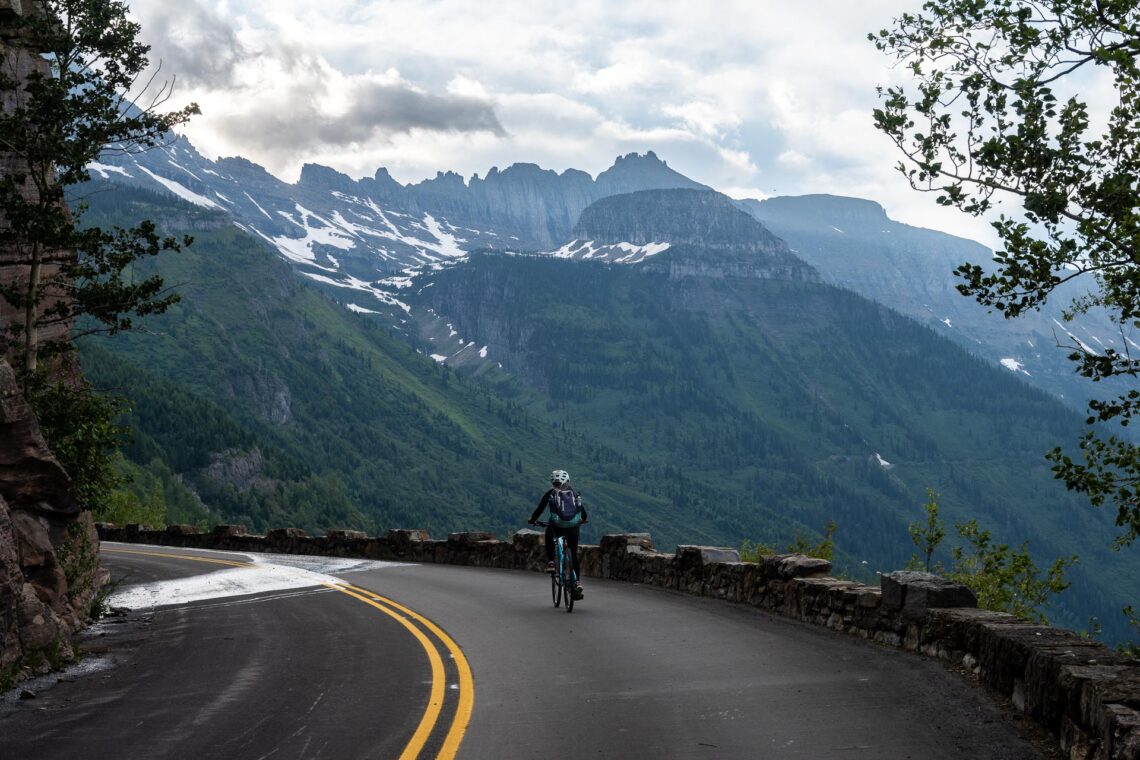 One of Glacier National Park’s biggest draws is the Going-to-the-Sun Road. Completed in 1933, it was one of the National Park Service’s first major efforts to cater to motor vehicle tourism. Named after neighboring Going-to-the-Sun Mountain, the road stretches roughly 50 miles between the park’s western and eastern boundaries.

Each spring before the road opens to vehicular traffic, the park allows cyclists to pedal from the western side of the park to Logan Pass – the road’s highpoint sitting at 6,646 feet along the Continental Divide. From the preferred starting point at Avalanche Creek, about 15 miles from the west entrance, the journey is 32 miles round trip with some 3,500 vertical feet of gain.

The last time I was on a bicycle was exactly four years ago. I was in Zakopane, Poland at Tatra National Park. Stephan and I thought we’d augment our outdoor experience by cycling to the trailheads. However, I ended up with a malfunctioning derailleur that left me exceedingly grumpy on the hilly terrain. With this being my most recent cycling experience, and with no meaningful climbing practice whatsoever, I was a bit unsure of how I’d do with an actual mountain pass. In spite of this, a couple of local friends were encouraging enough that we finally decided to give it a shot.

Glacier’s Going-to-the-Sun Road typically opens to motor vehicles in late June or early July, depending on when crews are finished clearing the massive accumulation of seasonal snow. Each year, the biggest challenge for plow crews is the Big Drift, an area just east of Logan Pass that is regularly buried under some 80 feet of snow. Yet 2020 was no typical year. In addition to late-season snows complicating removal efforts, road crews were delayed getting started due to restrictions from the COVID-19 pandemic. Consequently, when we arrived in mid-June, the road was still closed with no opening date in sight.

After finally deciding to rise to the challenge, we rented a couple of hybrid bikes for Monday, July 13th. Knowing full well that plow crews had been working diligently on snow clearance and road repairs, we wondered if we’d be too late. Luckily, a friend suggested I keep an eye on the Flathead Beacon, the area’s local newspaper, noting that they often announce the Sun Road’s official opening. Indeed, as I obsessively checked their Facebook page the Friday before our ride, I found an announcement that the road would be opening on our scheduled ride day (sometimes it pays to be a neurotic mess). By some extreme measure of luck, we immediately called the bike shop and were somehow able to secure a new rental for Sunday, the day before the road opened to cars.

Knowing it was a weekend, and that the Avalanche parking area regularly filled up by mid-morning, we arrived at the lot at 6 a.m. and hit the road just before 6:30 a.m. As we started out, we were shocked at how few other riders we were sharing the road with. The first five miles of the ride were fairly flat, following the vibrant, turquoise bends of twisting McDonald creek. I had a fleeting thought that ‘hey, this isn’t so bad,’ although that was quickly replaced with ‘you moron, it’s going to start climbing eventually.’ 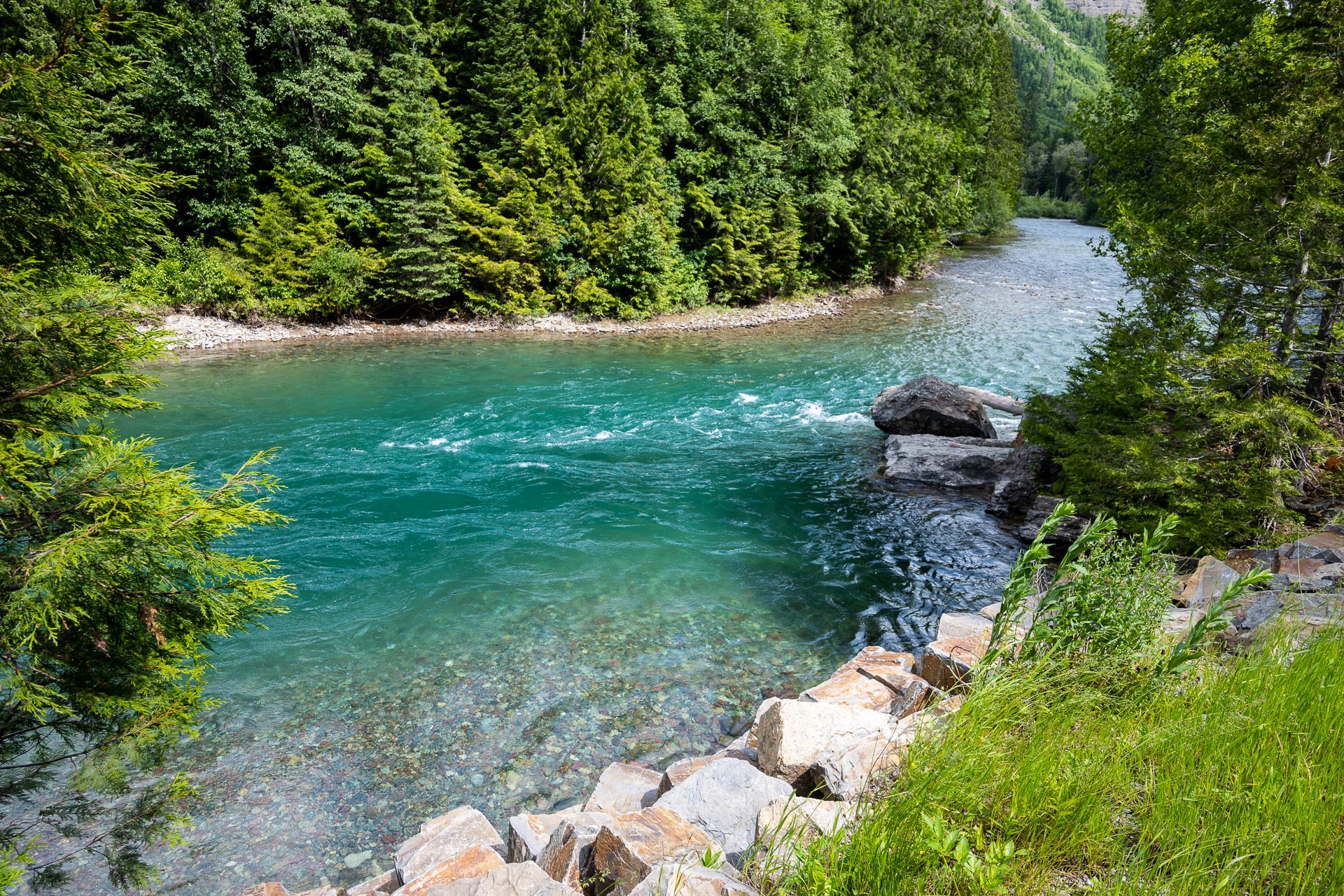 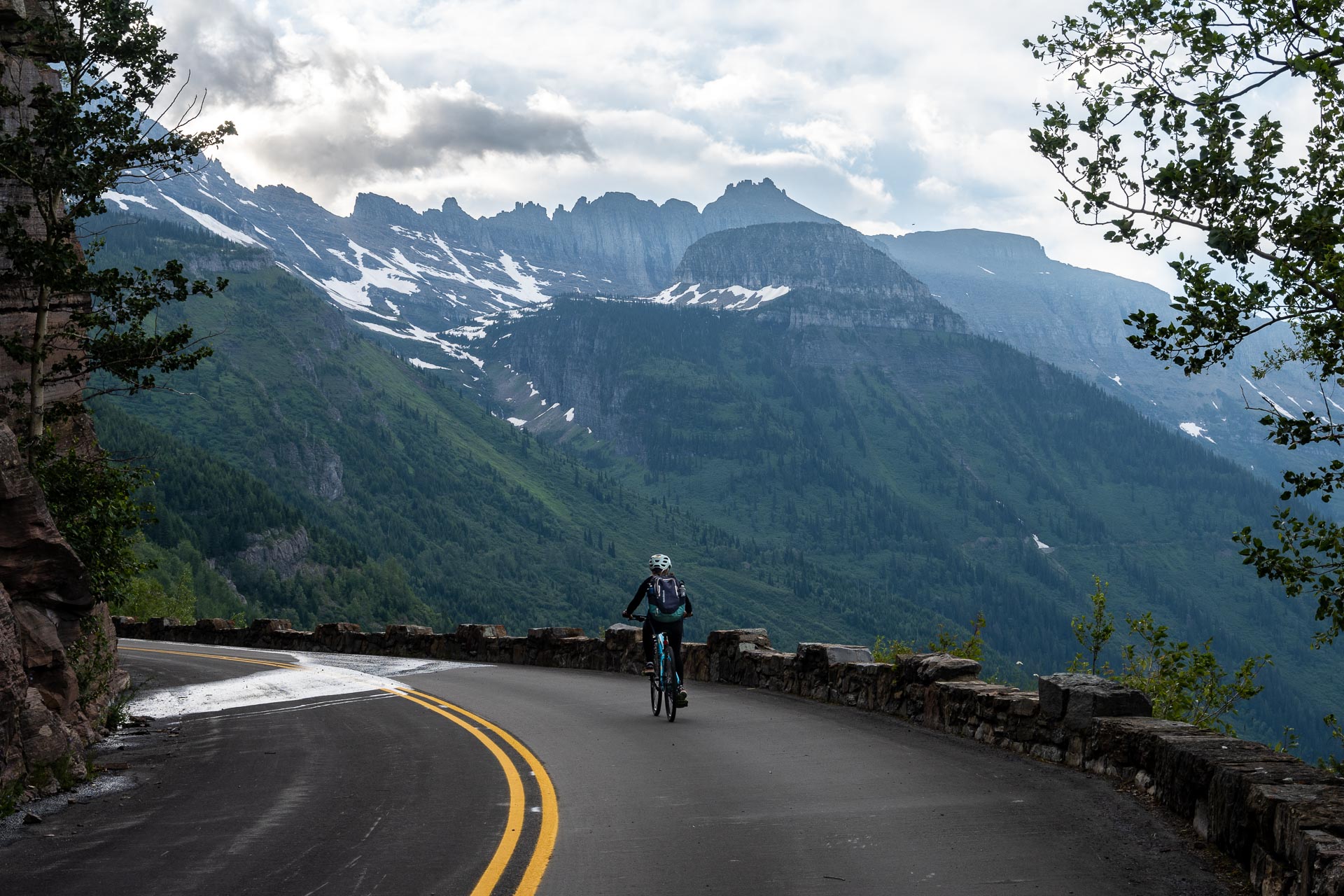 ‘Eventually’ came after about 5.4 miles. From here, it was an unbroken, 11-mile climb to the top of the pass. I rode through the initial shock of feeling suddenly winded, then downshifted the bike and got on with it for the next several miles. Around mile 9, though, I stopped for some water and a snack and began to question if I’d make it to the pass. The road had steepened significantly near The Loop, a lone, 180-degree switchback, and with each ensuing turn you could look out to the next stretch of incline. The scenery was spectacular – with mountains and waterfalls enveloping the road from every direction – but not so much so that I was completely distracted from my burning quads. At one point, a foursome on e-bikes came cruising past us uphill. One of them was bitching about the wind and, admittedly, the resentful shrew in me wanted nothing more than to reach over and rip the motor assist off his olive-green frame. 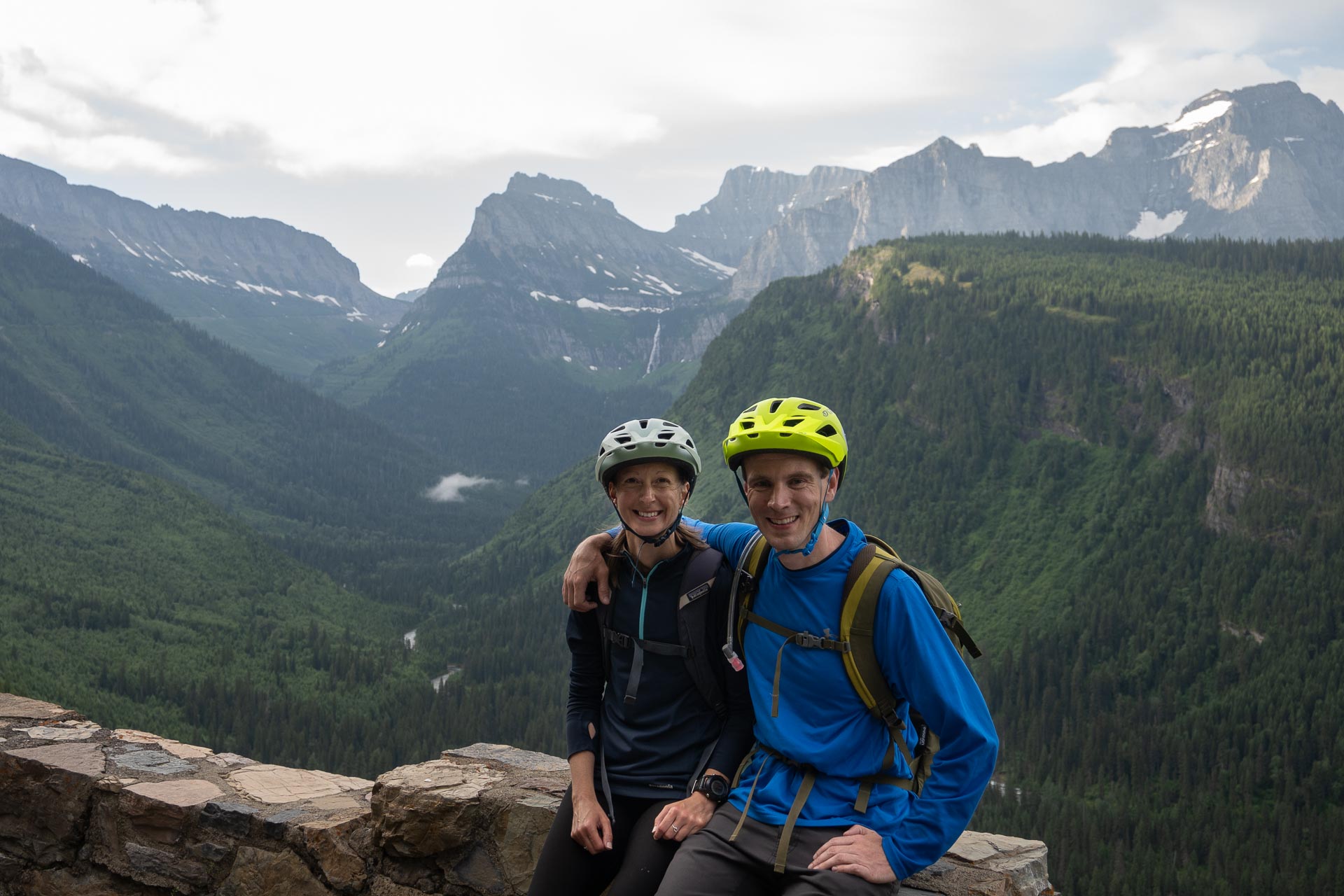 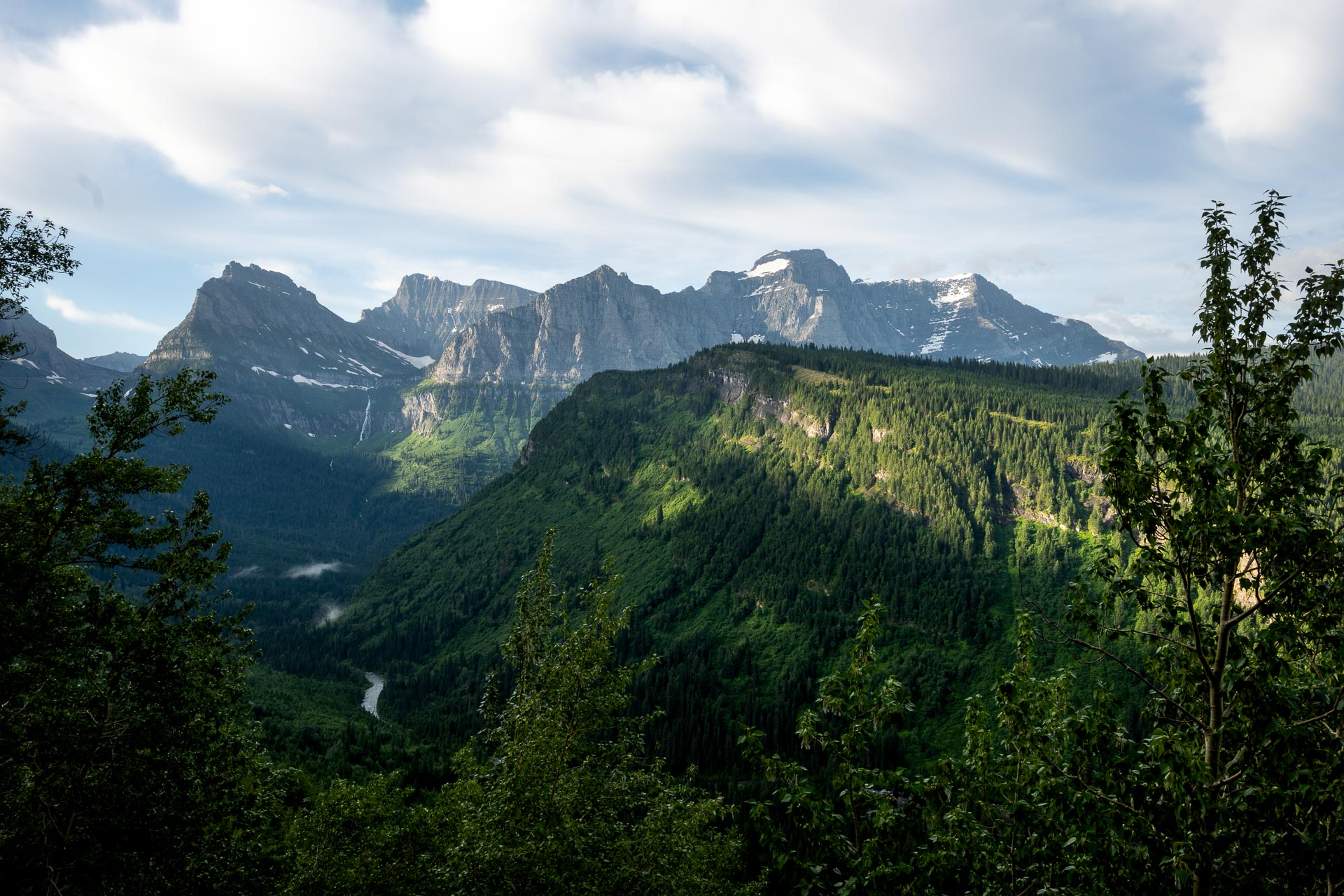 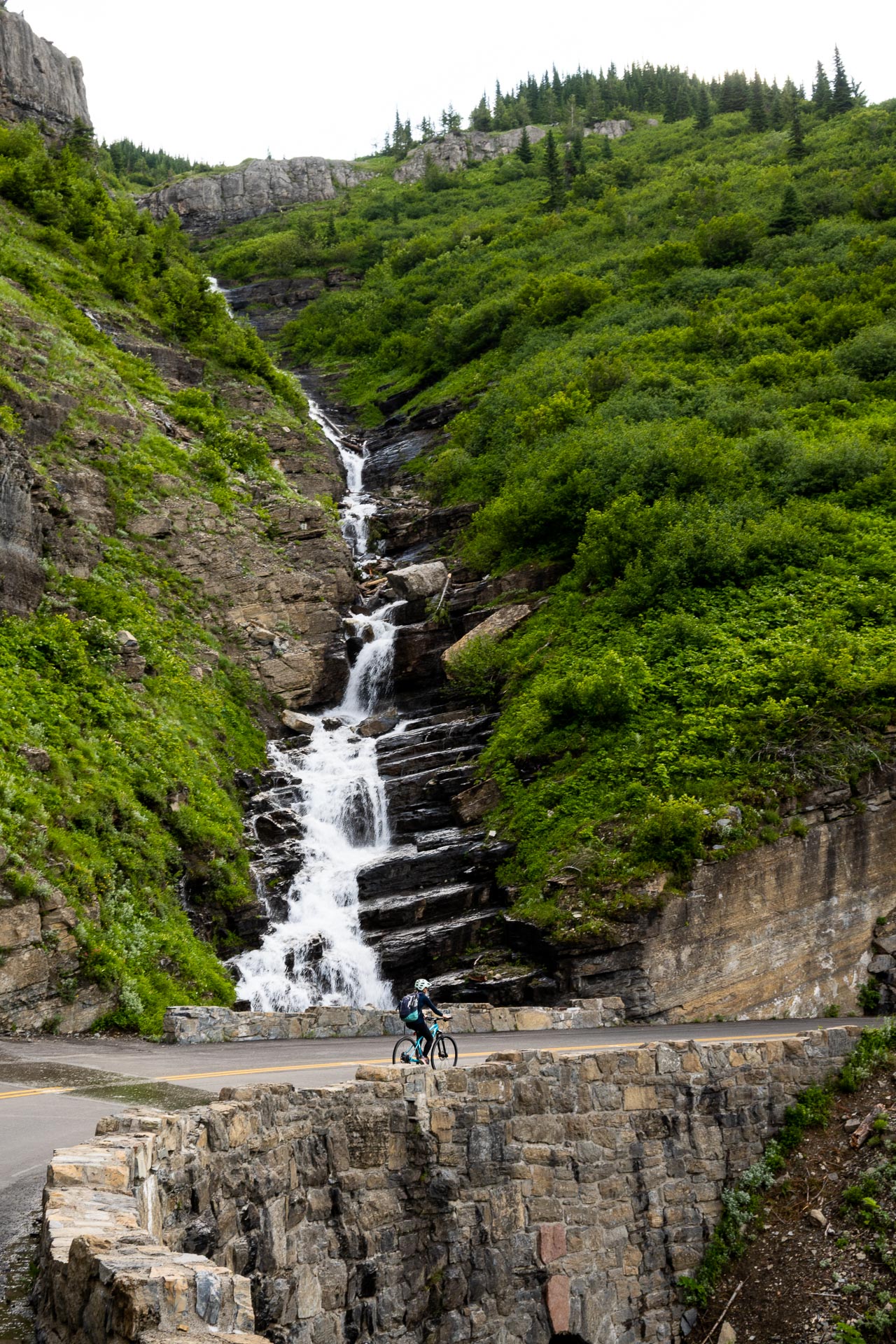 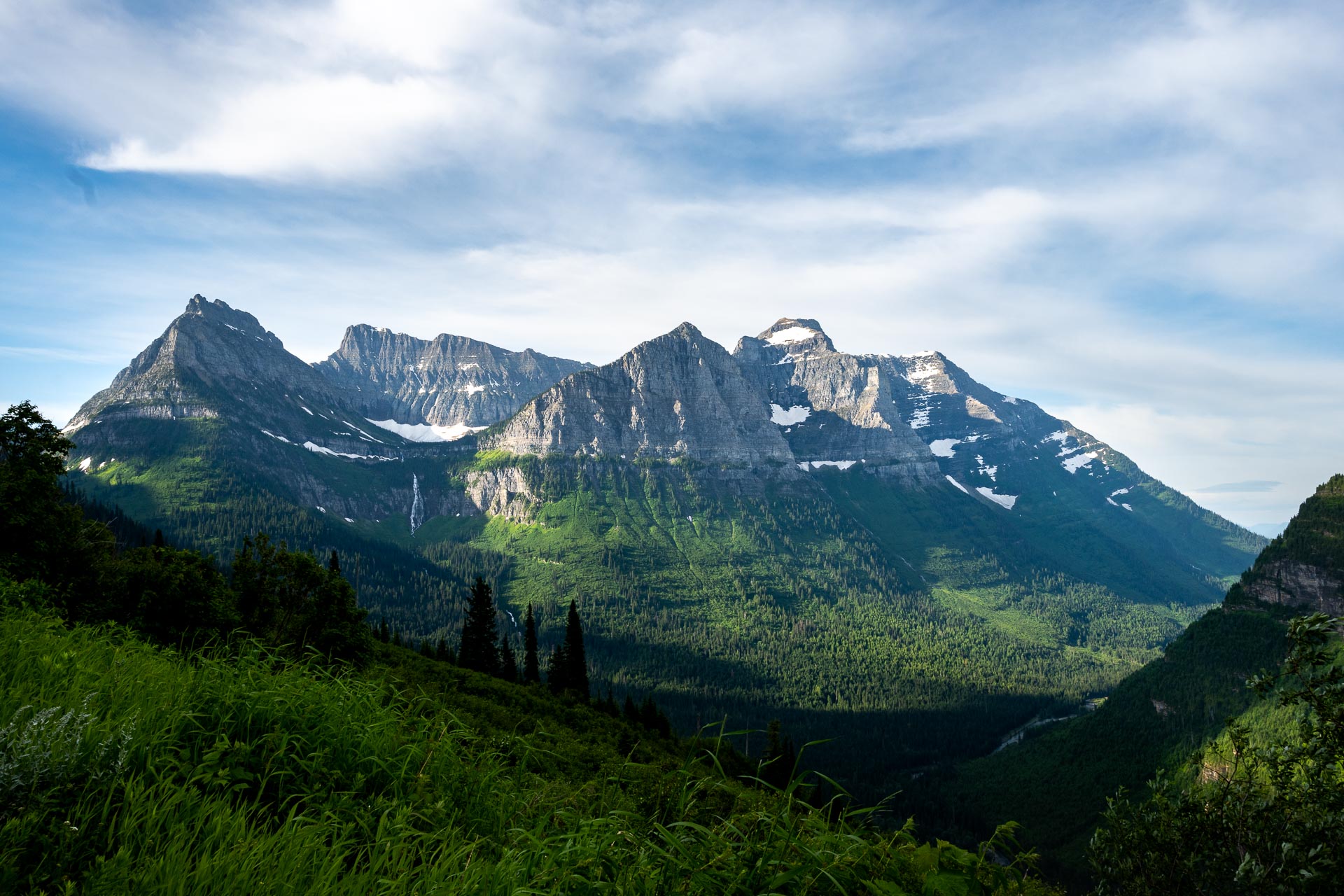 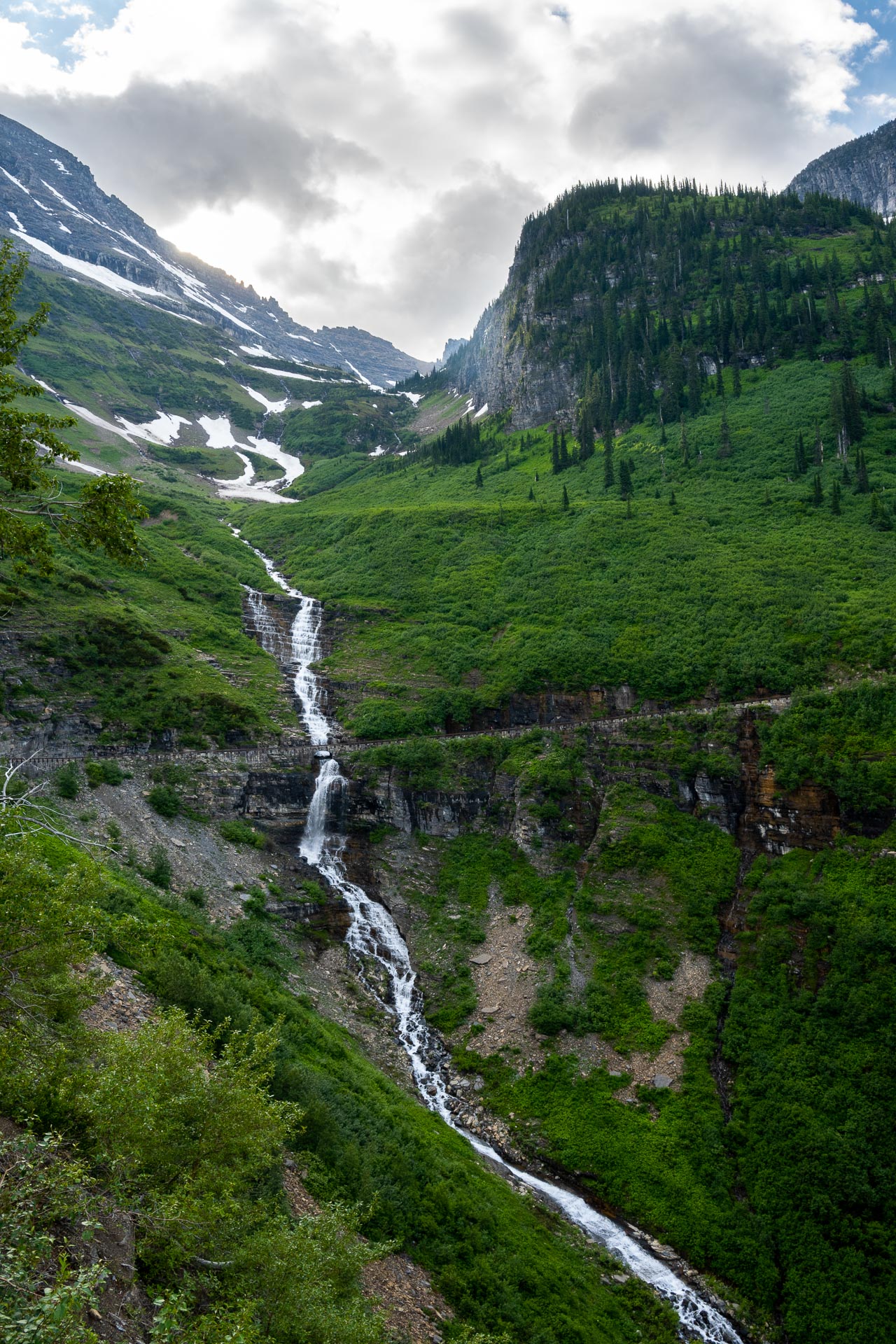 For the last four miles, I adopted the mantra that I could do anything for one mile, which was fairly instrumental in getting me up to that pass. As we rode the final stretch from Big Bend to Logan Pass, the wind that had whipped across the road intermittently became much more constant, and at times I felt like I was battling just to keep the bike upright. Seeing Clements Mountain looming and knowing the pass was just a couple miles ahead, though, was just the boost I needed to make one final push to the top.

We made Logan Pass in 3:30 – by no means a new speed record, but with a sense of accomplishment nonetheless. We snapped a couple obligatory photos in front of the Logan Pass/Continental Divide sign, feeling as if we rightfully earned our spot up there. The weather was sunny and nice, but with temps around 43F and 20–25 mph gusts, we threw on some extra layers before finding a quiet spot for our well-deserved ‘lunch’ at 10:30 a.m. As we walked across the expansive and completely empty parking lot at the visitor center, we felt even more grateful that we were able to enjoy the scenic mountain pass with only a few dozen other cyclists. 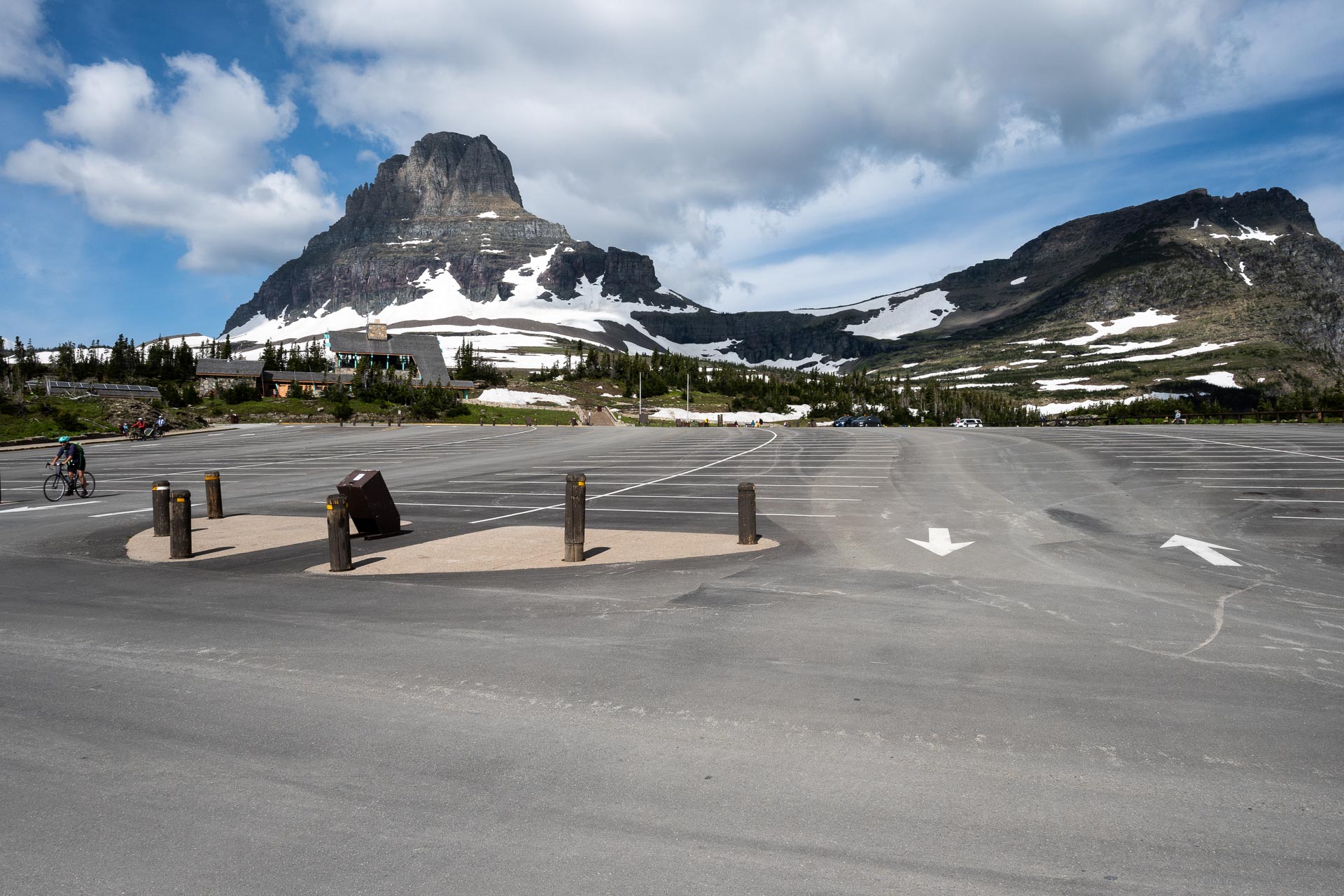 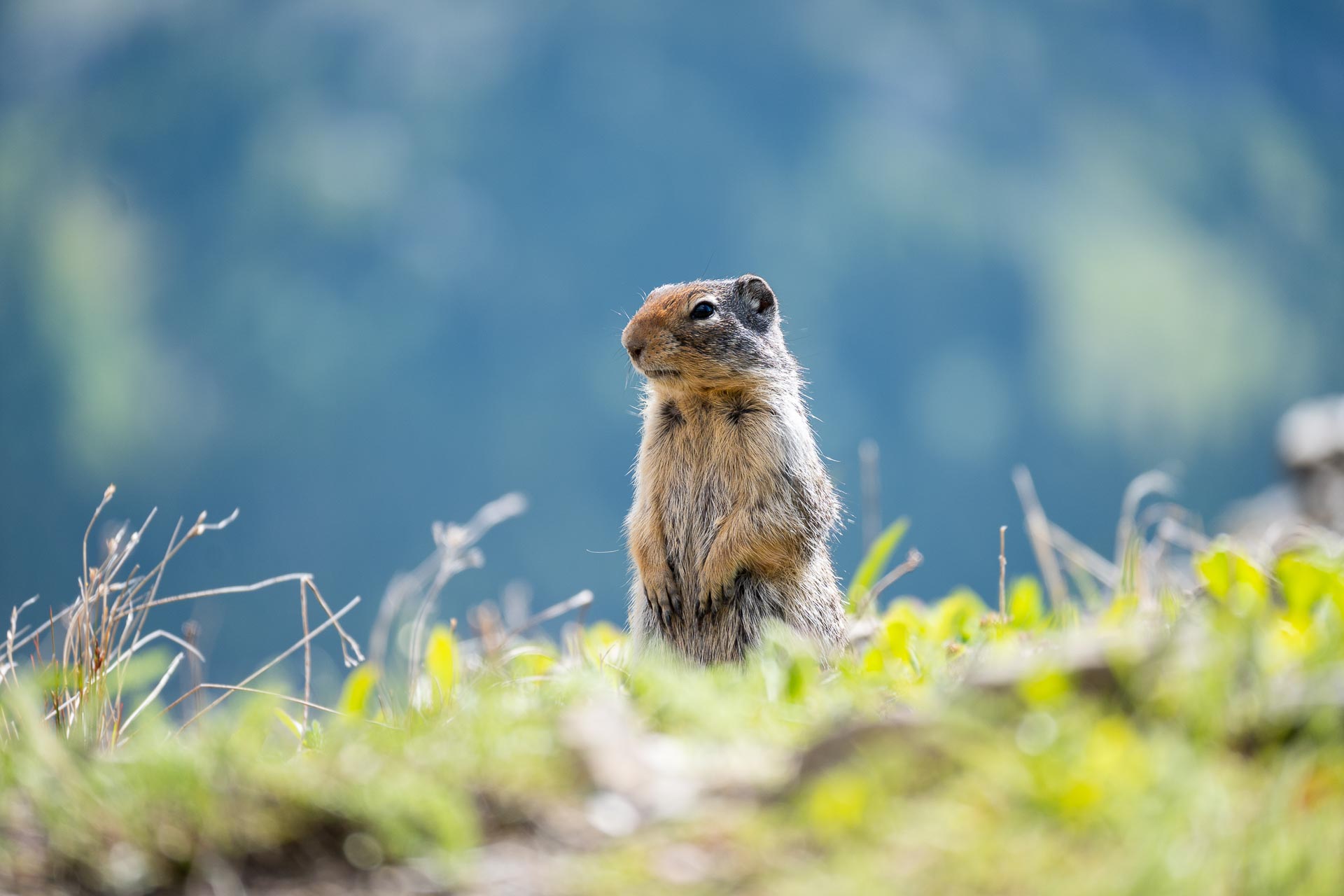 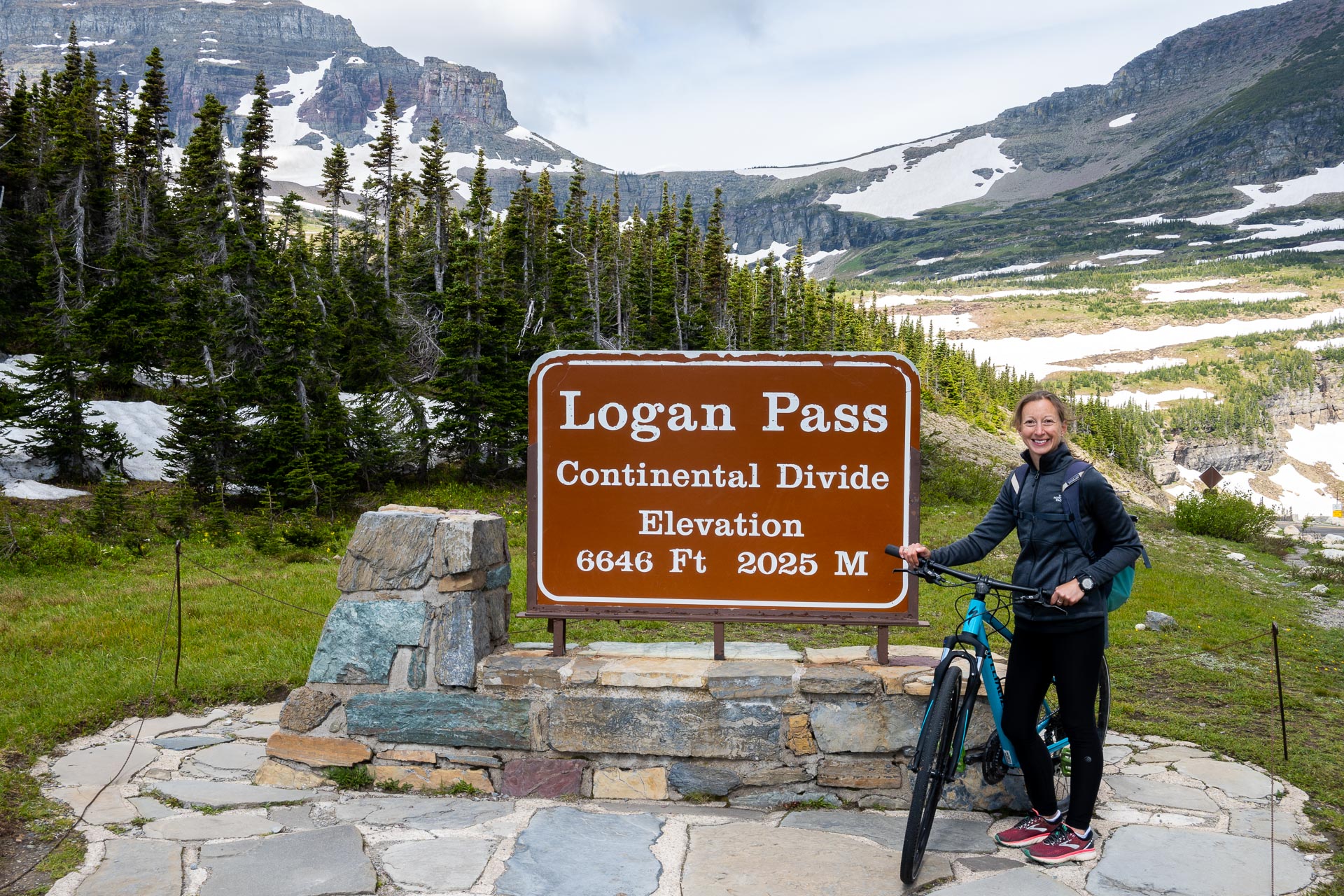 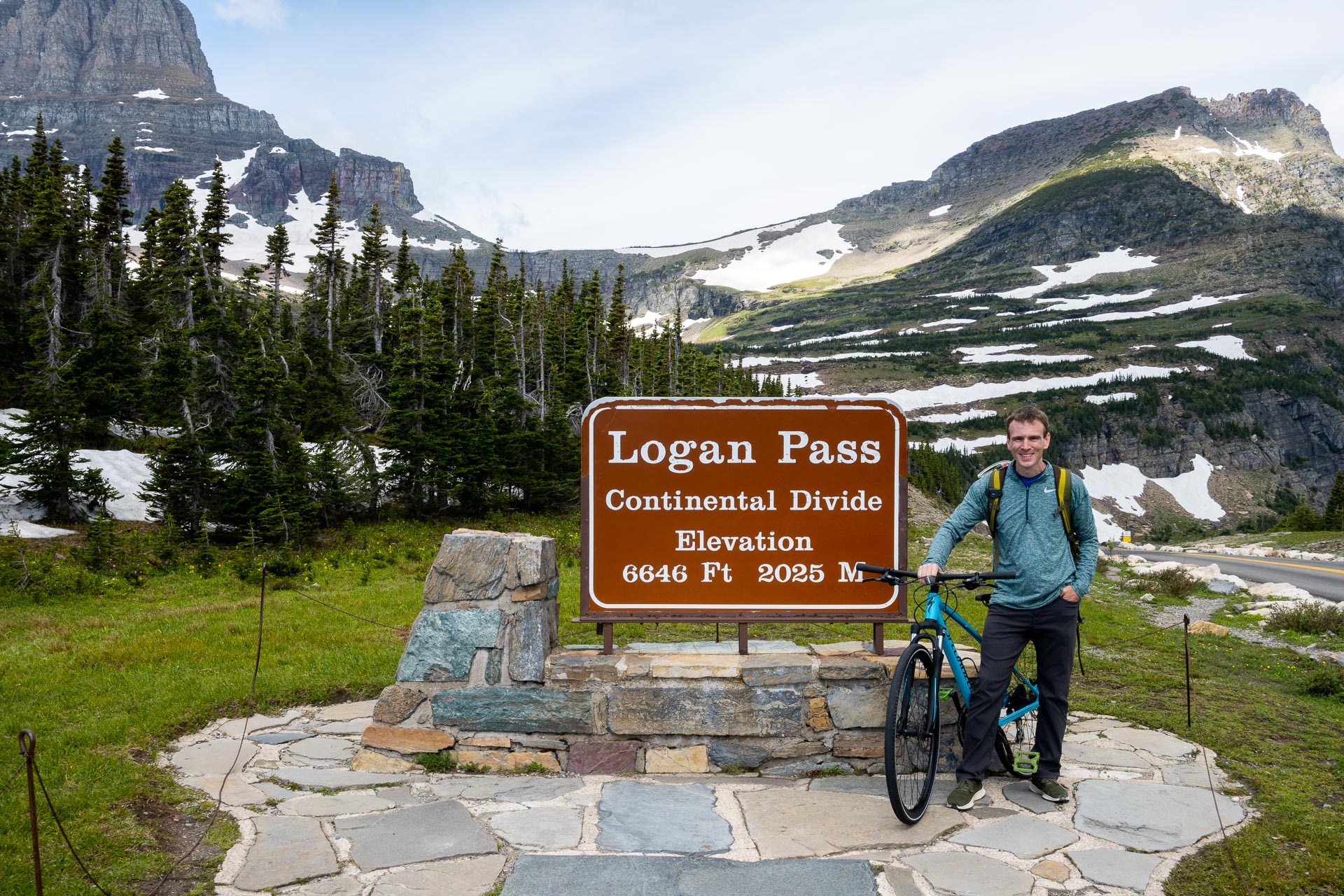 By the time we left Logan Pass, the sun was higher in the sky and had started to illuminate the surrounding peaks of the Continental Divide. The view from Big Bend was spectacular, showcasing the peaks of the western half of the Going-to-the-Sun Road. 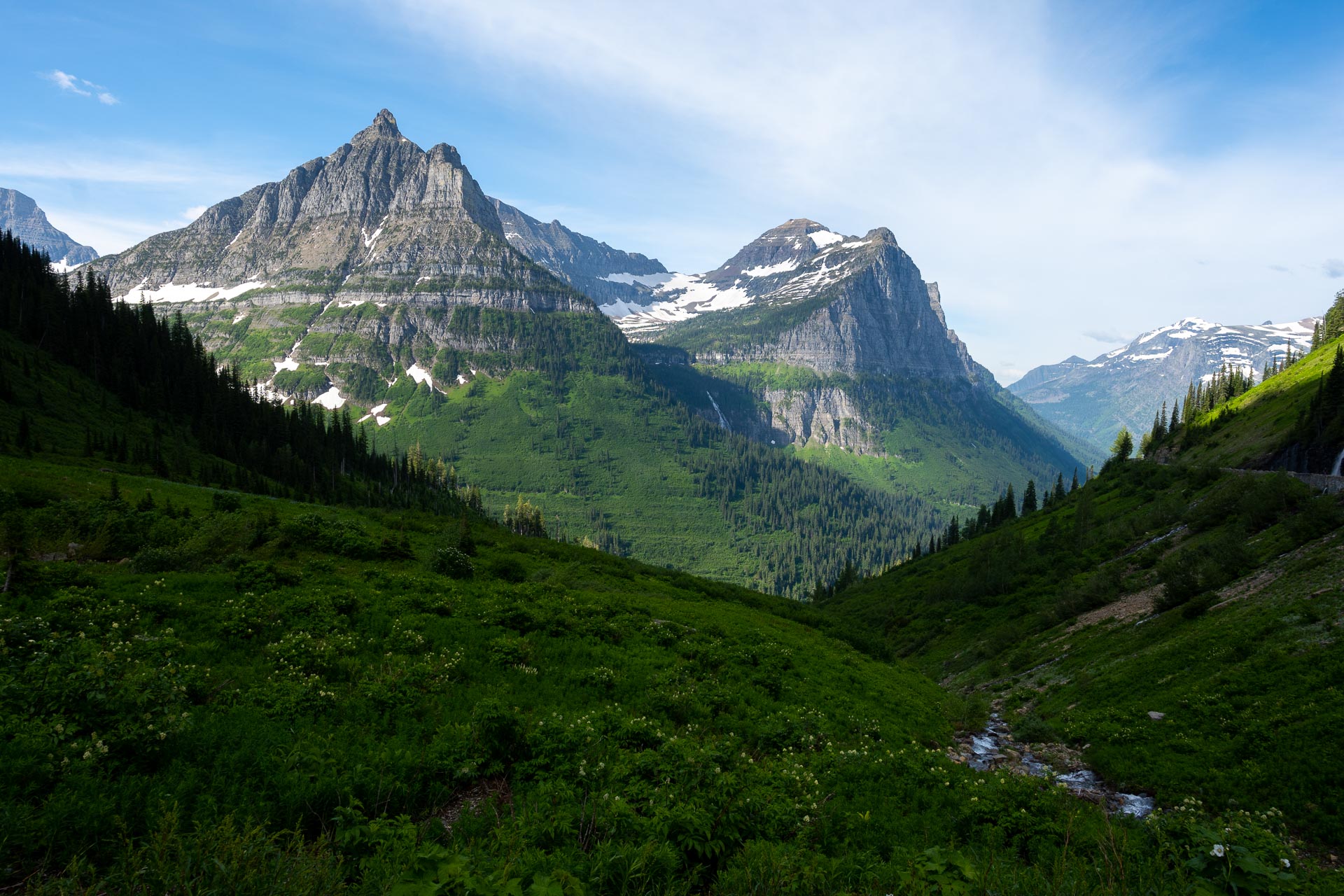 Of course, going down was much more relaxed than the arduous climb up. It was so refreshing to sail down that 11-mile slope, pedals fixed and my right hand gently squeezing the rear brake. It also felt so good to be the person now speeding down the mountain with a huge smile, like the couple dozen others I looked at with mild intense envy during our last few miles of ascent. 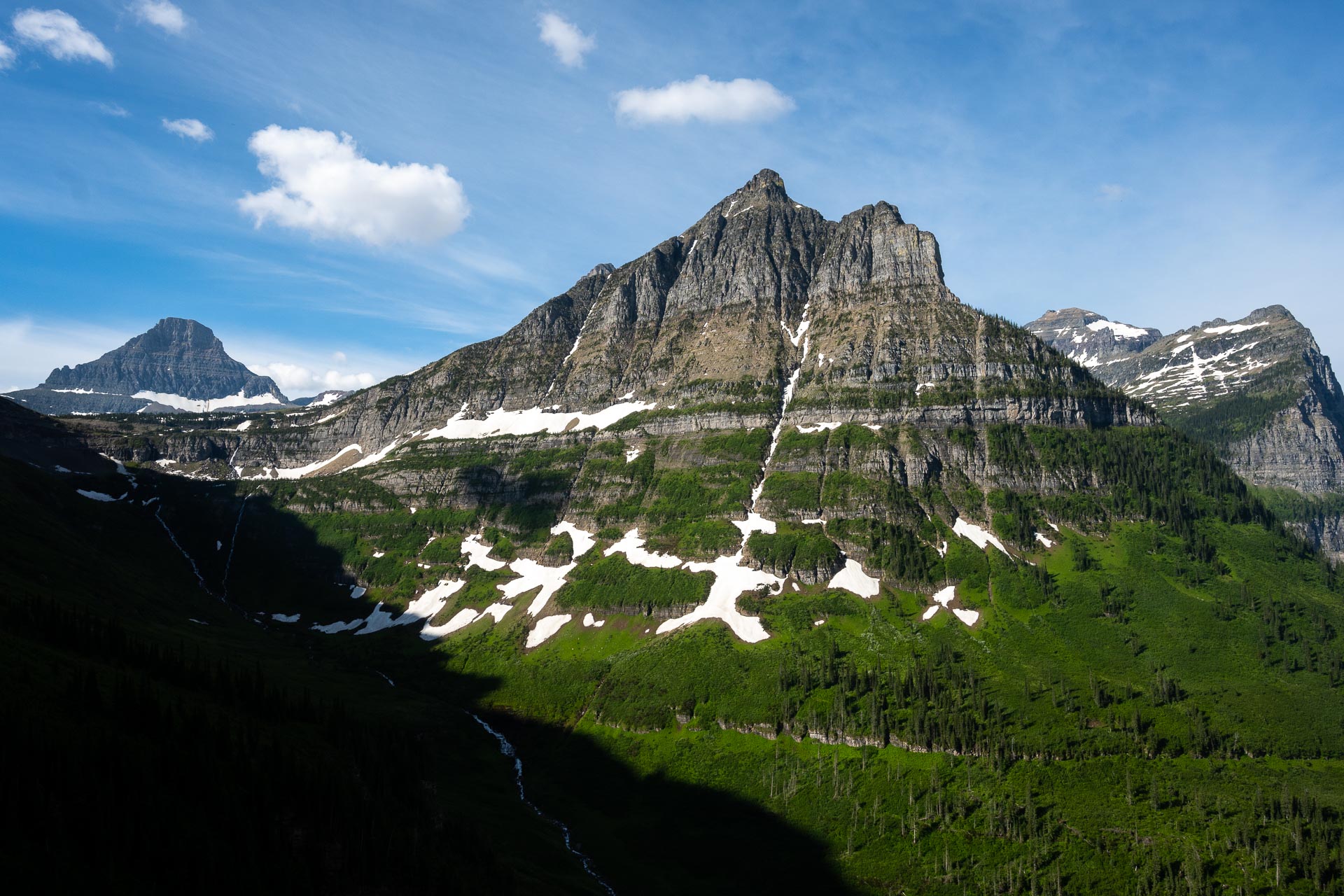 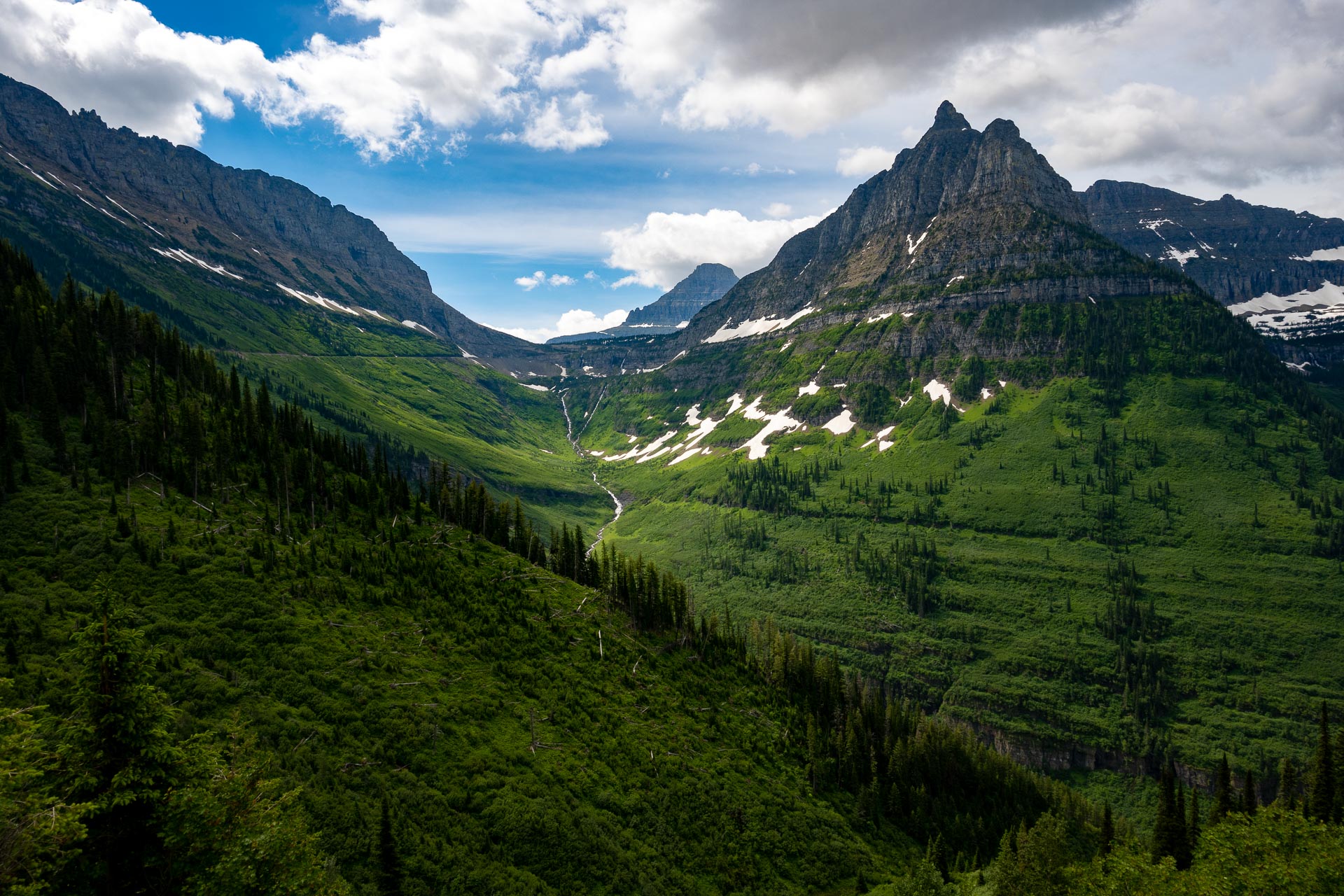 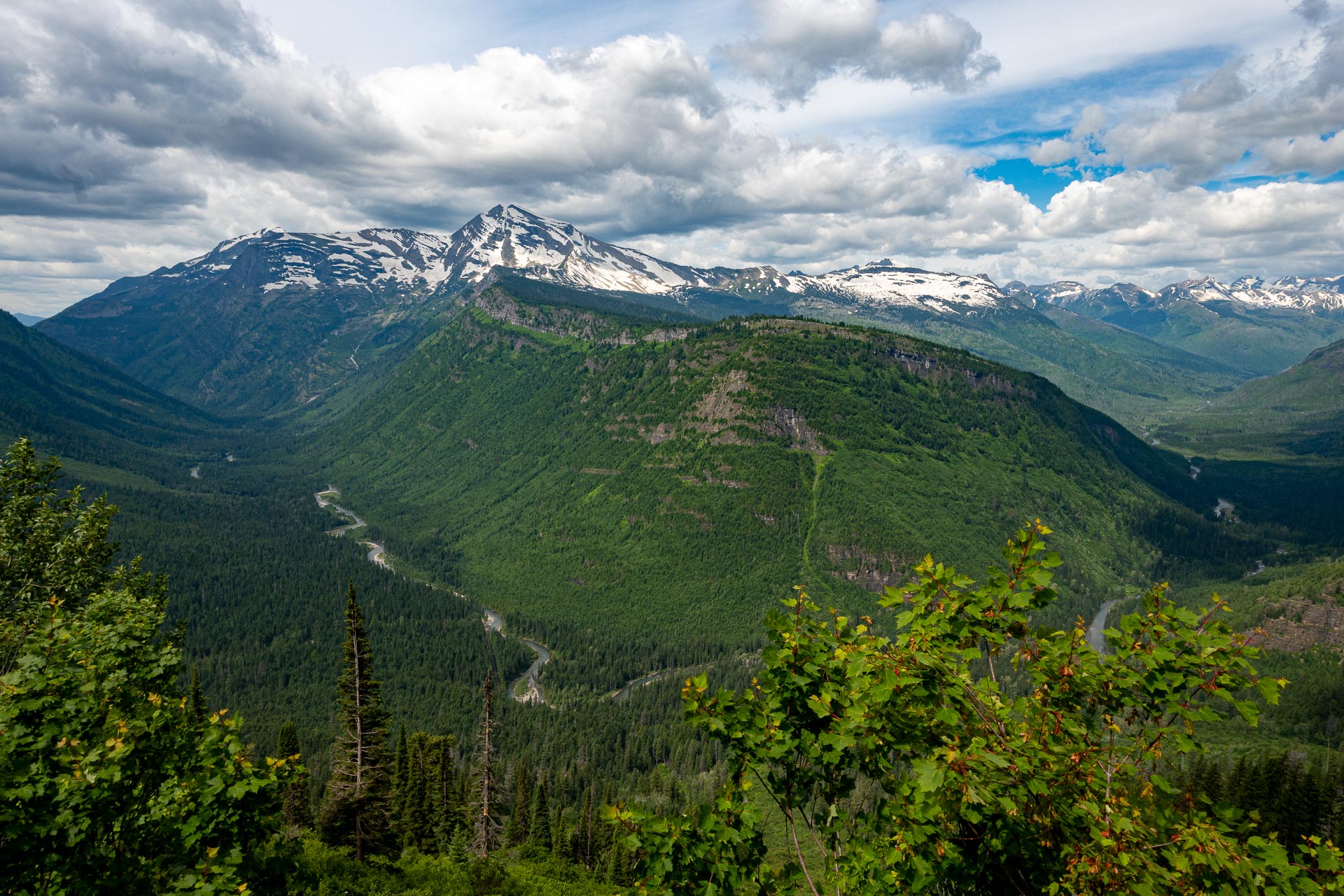 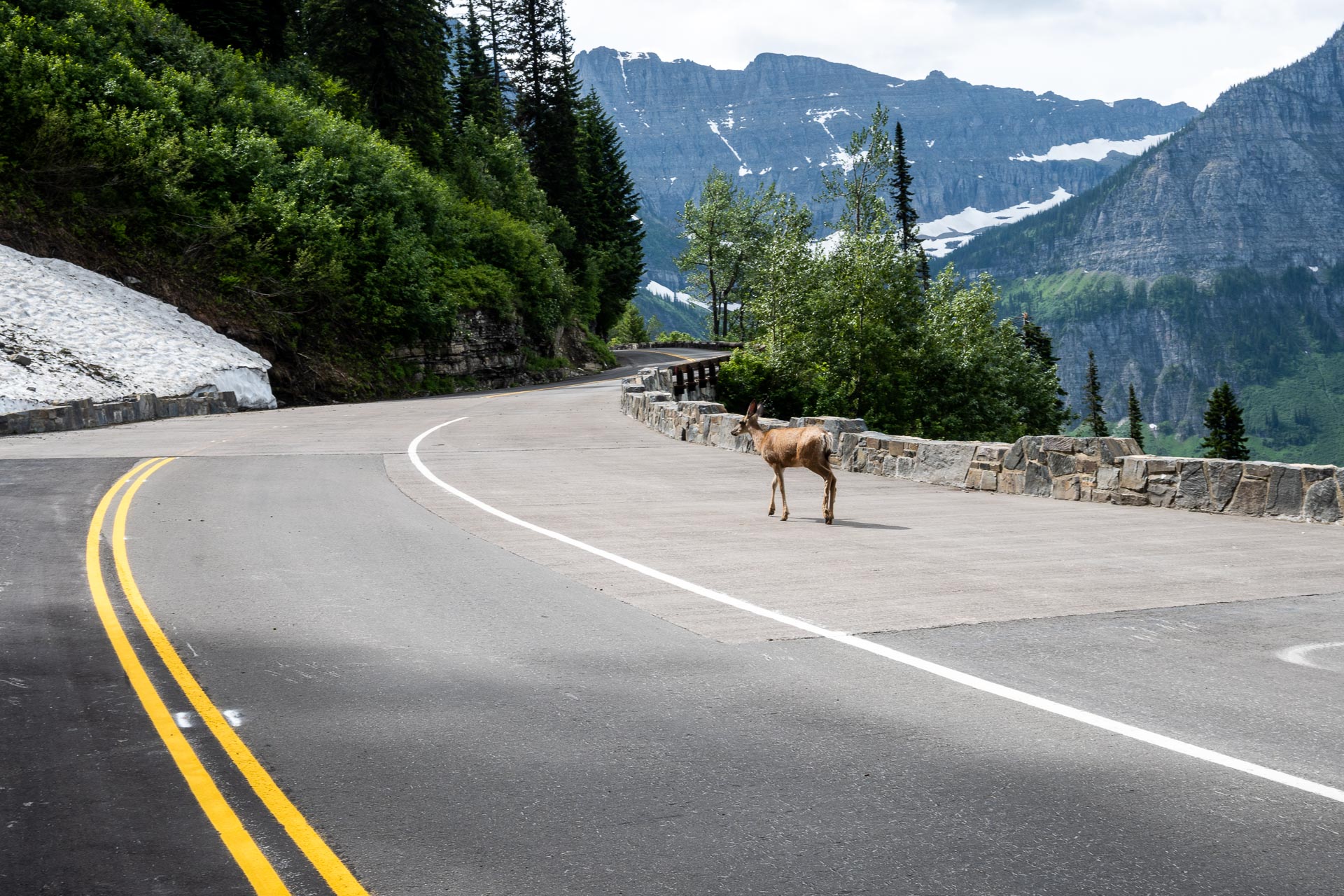 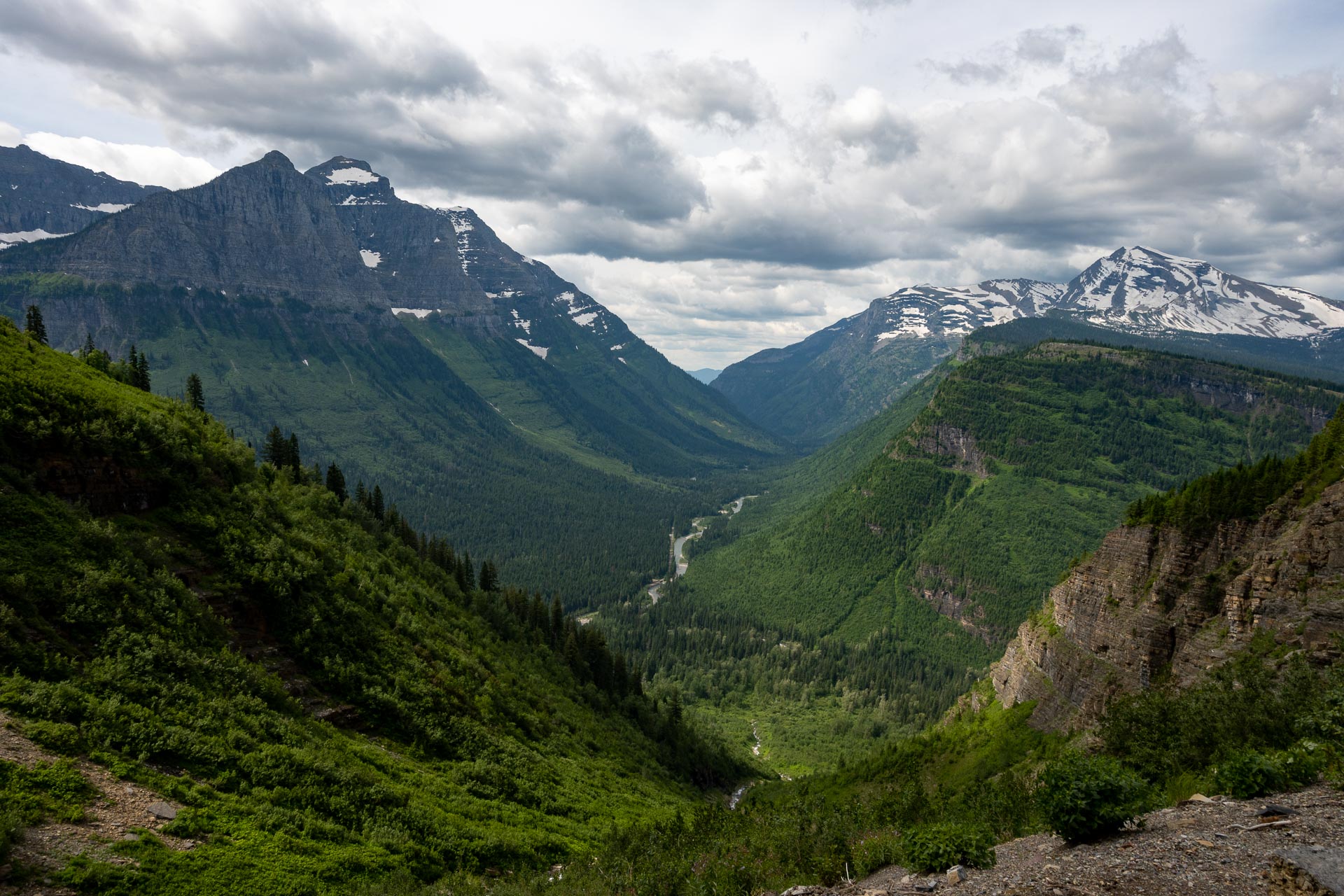 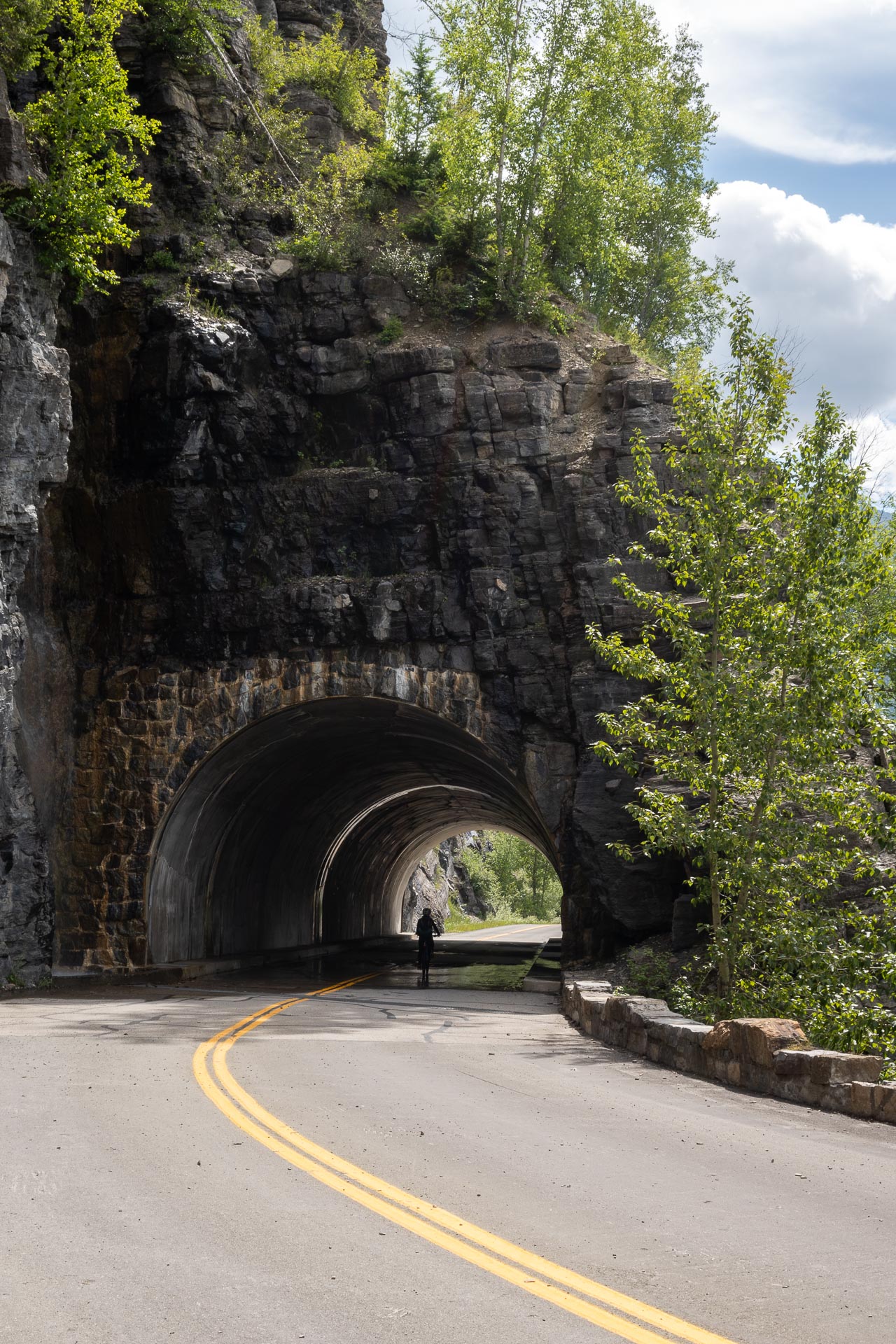 As I reached the last five miles of flat section, quickly running out of coasting momentum and once again having to resume pedaling, I checked my Garmin to look at the time. It was amazing that the long climb up took us about three hours to complete, while the ride down was a mere thirty minutes.

The ride was definitely a challenge, but one we are so glad we took on. It was an absolutely stunning way to see that part of the park. I’m not sure if it was our early start, but for the majority of the ride, we found ourselves alongside just a handful of cyclists, occasionally even having stretches of the road entirely to ourselves. It was incredibly peaceful, and having the freedom to pause and enjoy a view from any point we wanted made it even more special. 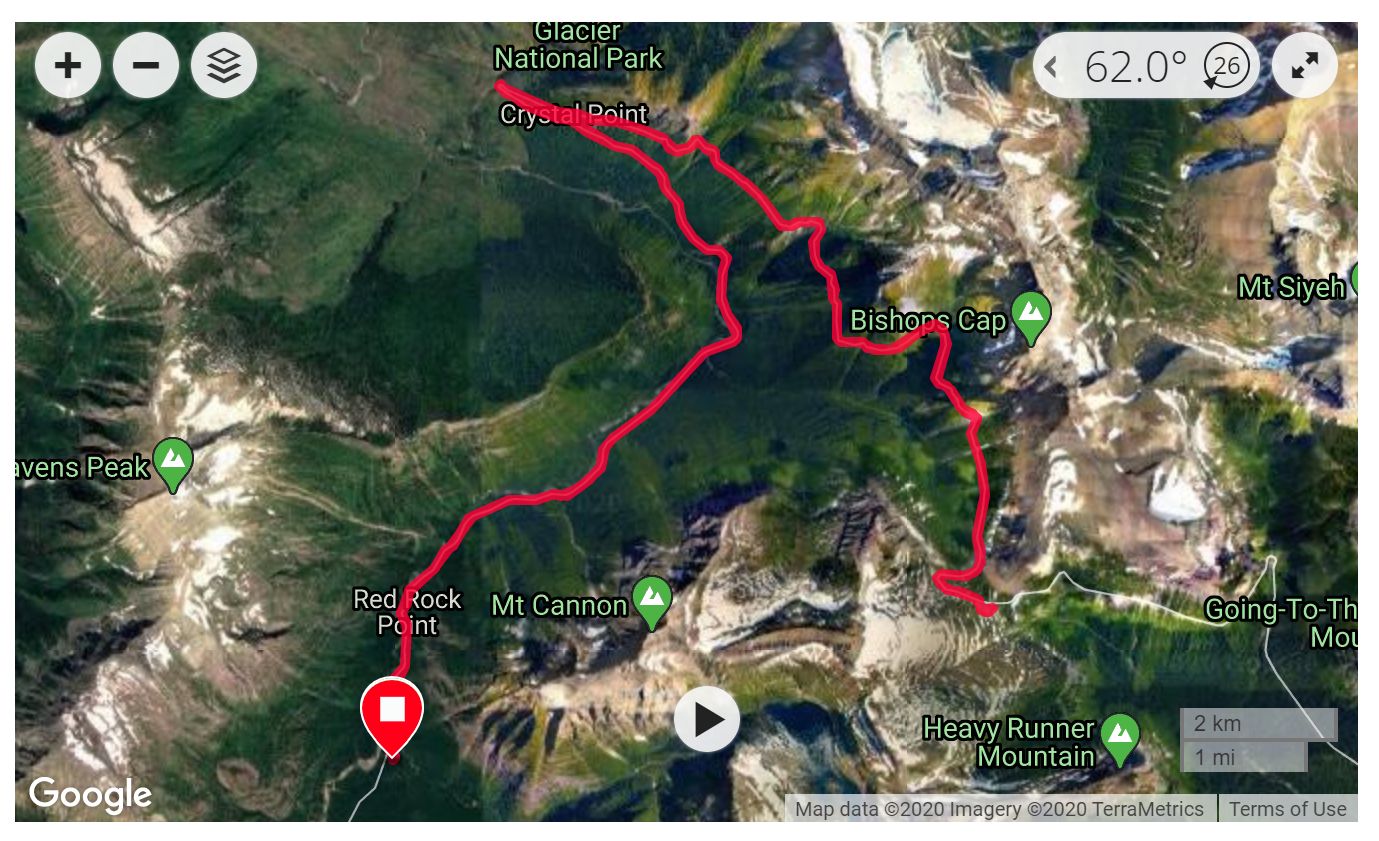