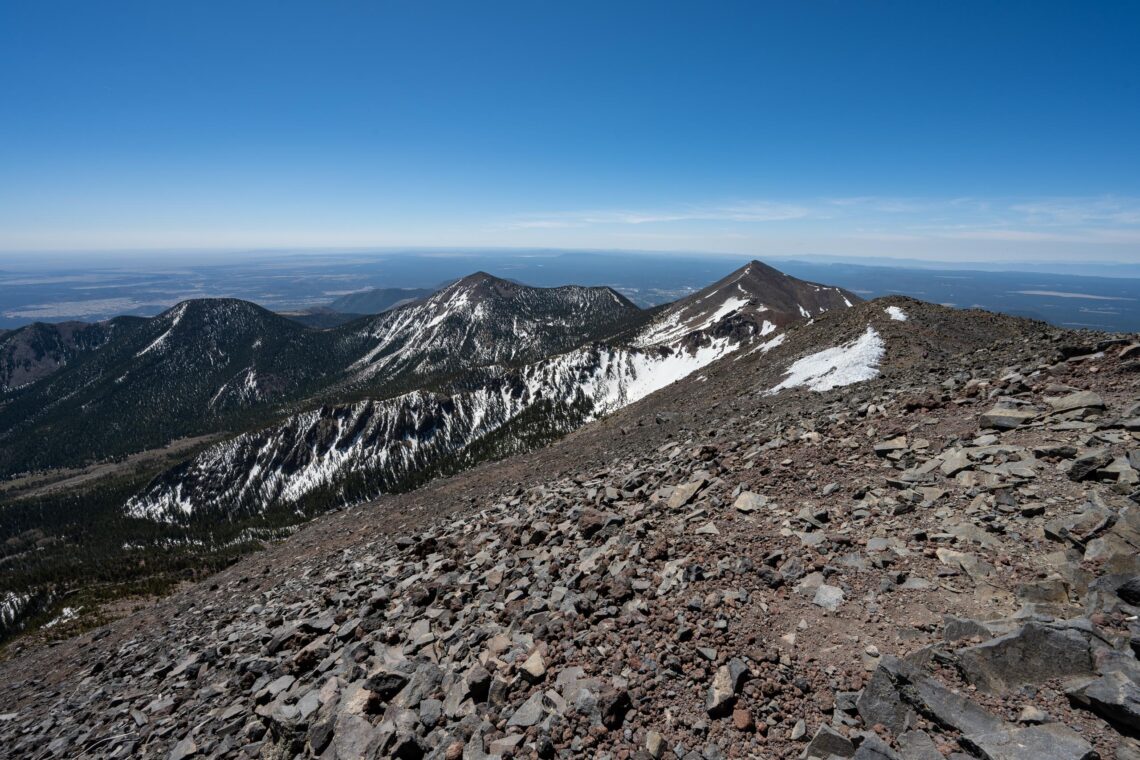 While it may be better known for its deserts and cacti, Arizona is actually one of the most mountainous states in the country. Perhaps even more unexpectedly, the state’s highpoint rises to an impressive 12,633 feet in elevation.

Sitting just seven miles north of Flagstaff, Humphreys Peak is the highest of the San Francisco Peaks – a collection of six summits that make up the U-shaped rim of San Francisco Mountain. The large massif is actually an extinct stratovolcano, and is the most prominent feature of the surrounding San Francisco Volcanic Field – an 1,800-square-mile expanse that’s peppered with cinder cones, dome volcanoes, and ancient lava flows.

Half a million year ago, San Francisco Mountain was quite likely the highest point in the continental U.S., soaring to a height of 16,000 feet. Some 400,000 years ago, however, the composite volcano erupted with an explosive force. The sudden eruption caused a flank collapse and massive debris avalanche, similar to the cataclysmic fate of Mount St. Helens in 1980. As a result, San Francisco Mountain was reduced to its more modest, present-day height.

With the mountain just an hour’s drive from our place in Williams, we couldn’t leave the state without tagging the summit. After waiting for a stubborn snowpack to retreat, then postponing due to a monster, week-long windstorm that whipped across northern Arizona, we were finally able to eke out a hike during our last weekend in town.

The primary route to the summit, Humphreys Trail (#151) begins at Flagstaff’s lone ski resort, the Arizona Snowbowl. About a twenty-minute drive (14 miles) from downtown Flagstaff, the trail totals five miles in one direction and gains just over 3,700 vertical feet. While the trail isn’t overly steep, it does begin at an elevation of around 9,000 feet; consequently, you may feel some of the effects of being up at altitude not long after starting out on the trail.

For the first 3.5 miles, the trail is quite moderate as it winds through dense spruce-fir forests. The path is in good condition and, when we hiked in mid-May, there was only about a mile of patchy, compact snow remaining. 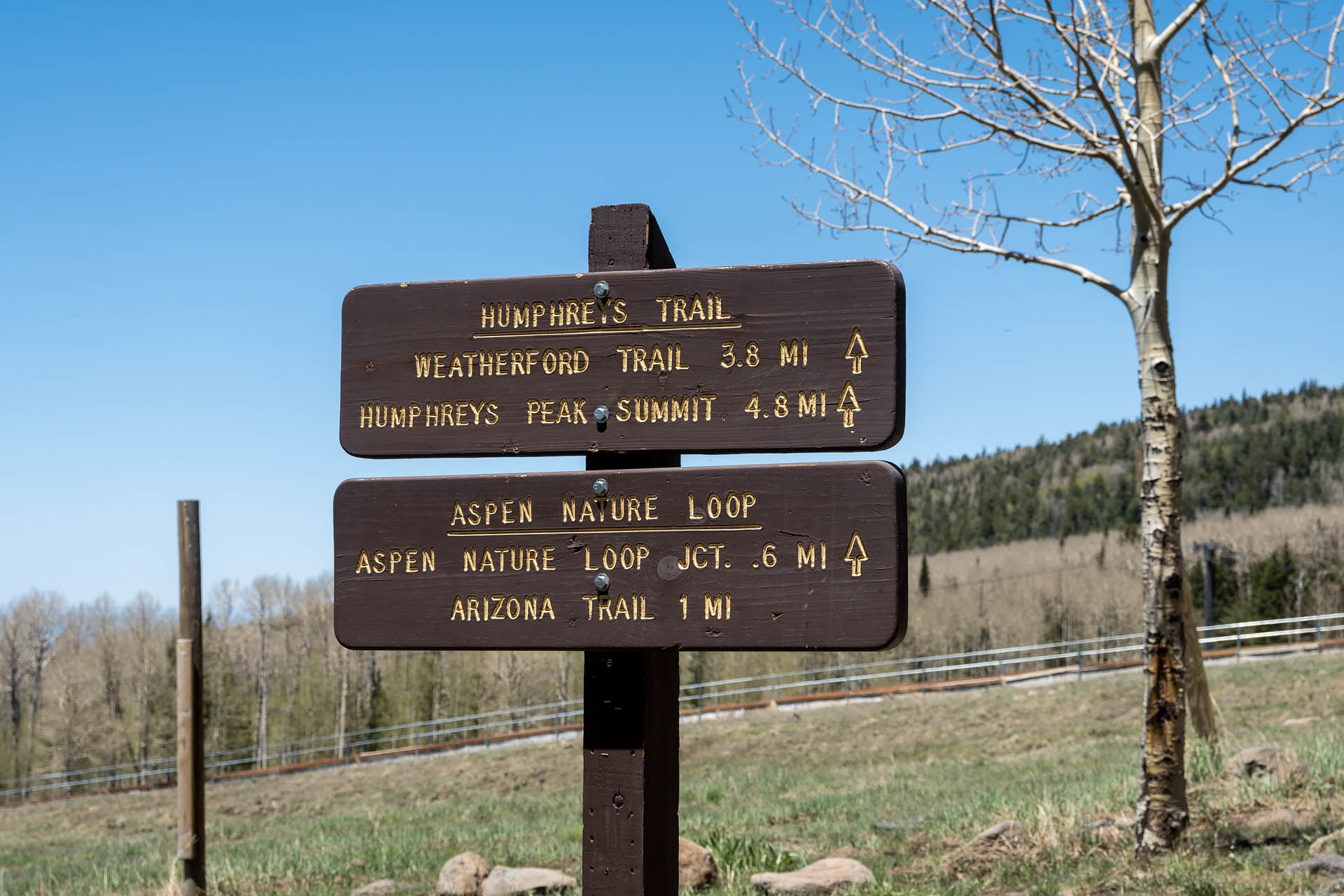 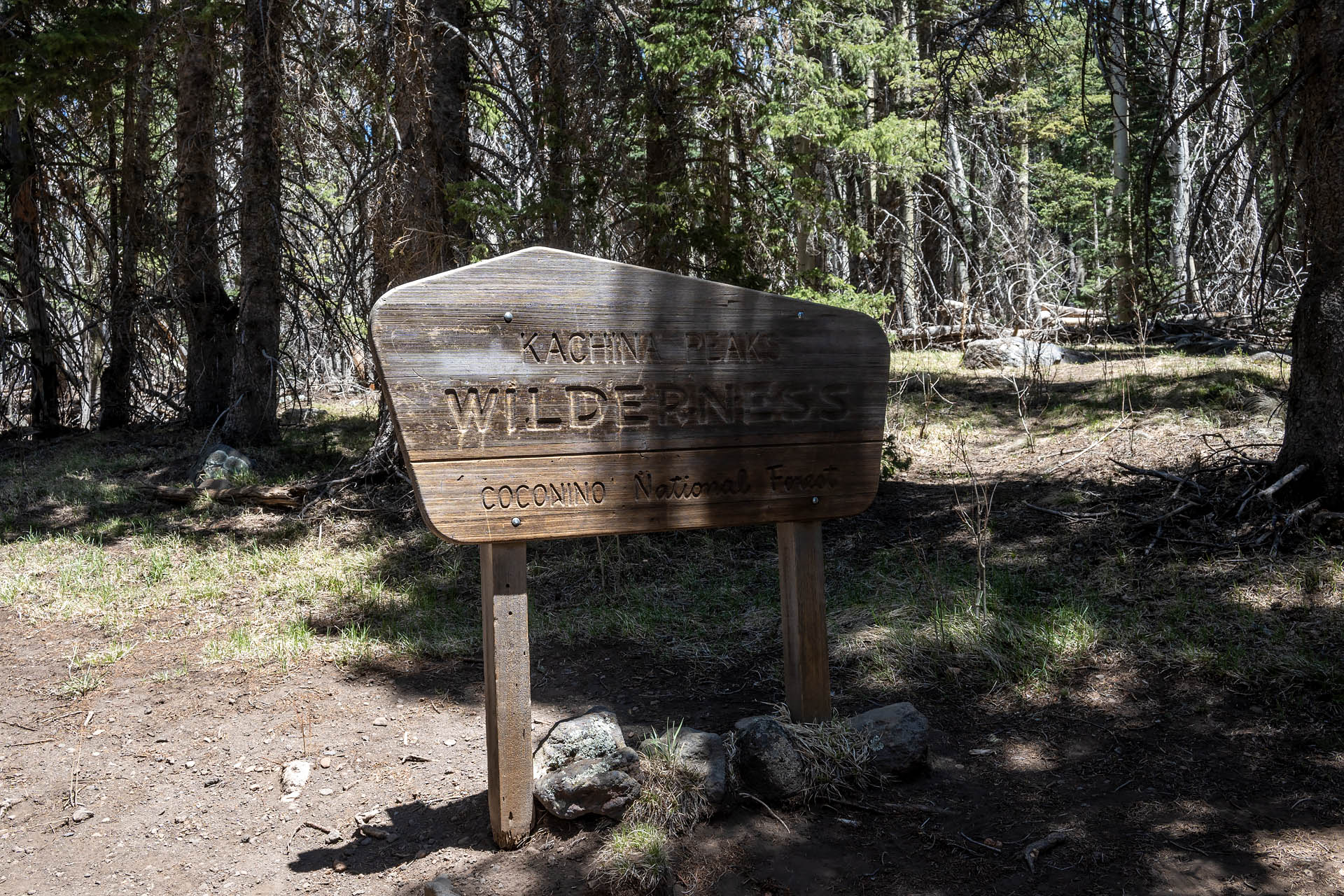 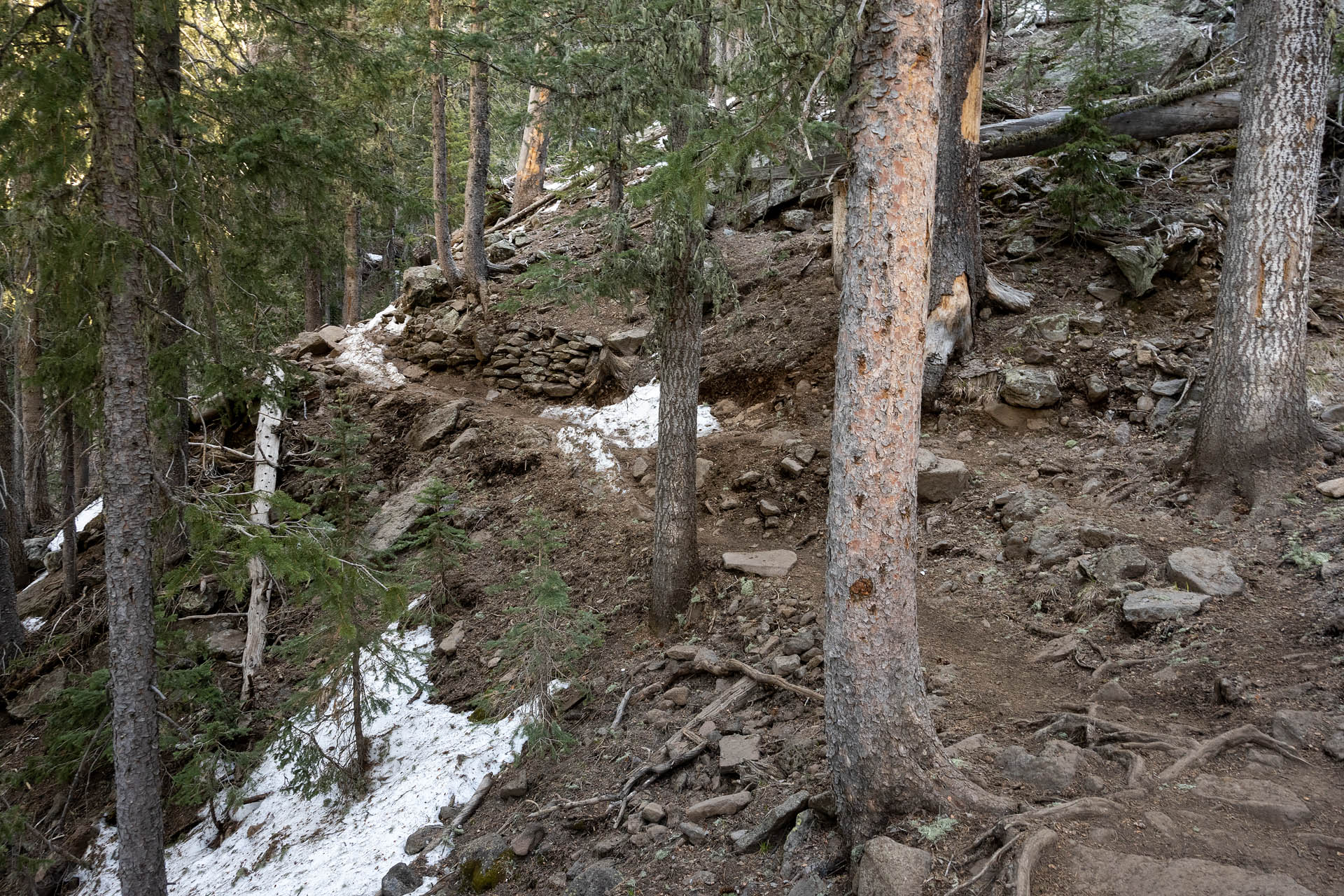 About four miles from the trailhead, we reached the saddle between Humphreys and neighboring Agassiz to the south. Agassiz is Arizona’s second-highest summit at 12,360 feet and – depending on your vantage point from Flagstaff – is often confused for slightly taller Humphreys. While the route to the top of Agassiz looks easily achievable, it’s actually illegal to hike most of the year due to its critical alpine habitat. The only time it’s possible to summit Agassiz is in the winter when the mountain is completely snow-covered. Consequently, it’s a fairly risky challenge due to weather and extreme avalanche danger (if you do take on the winter challenge, you’ll need to obtain a backcountry permit and be both experienced and well-prepared). 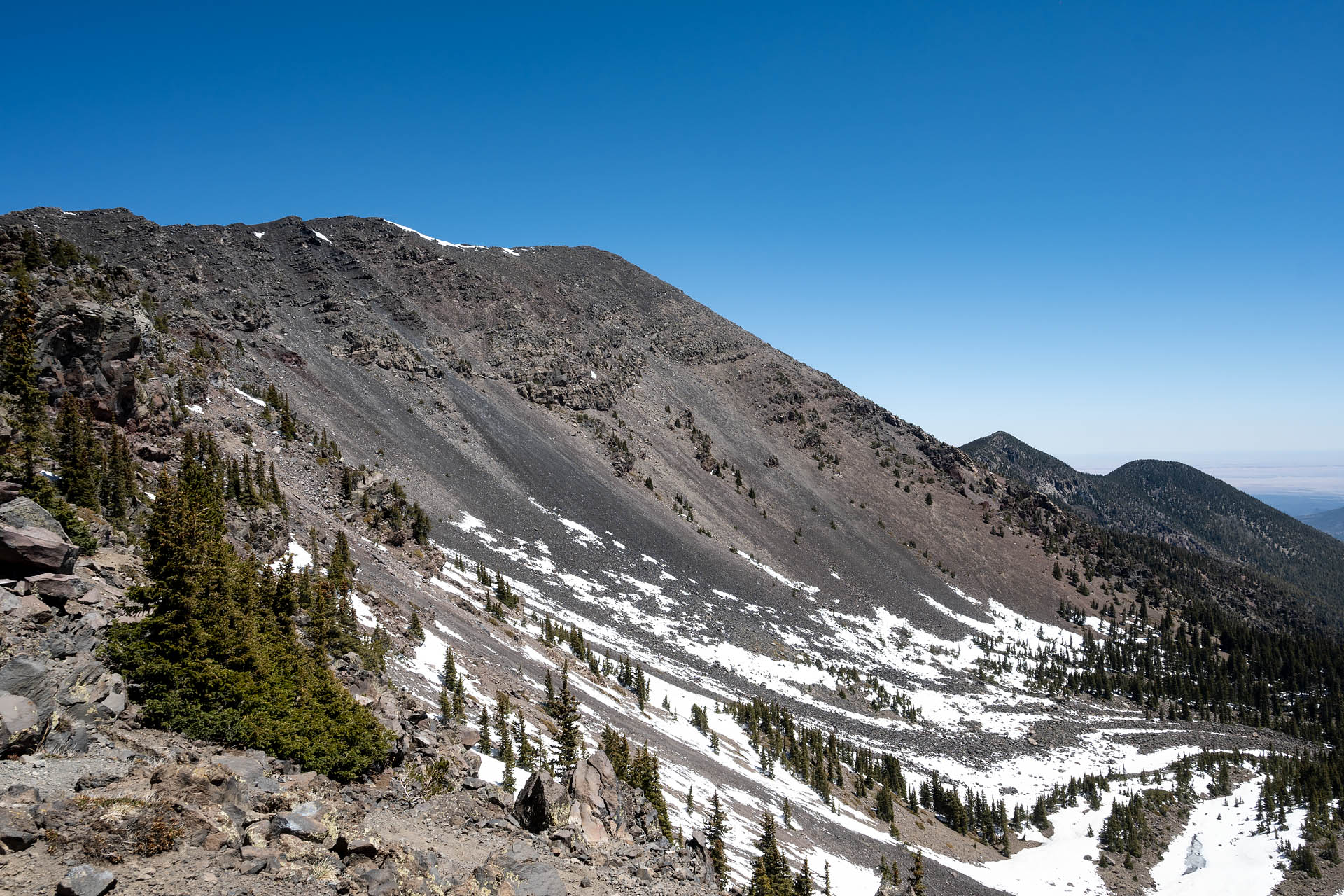 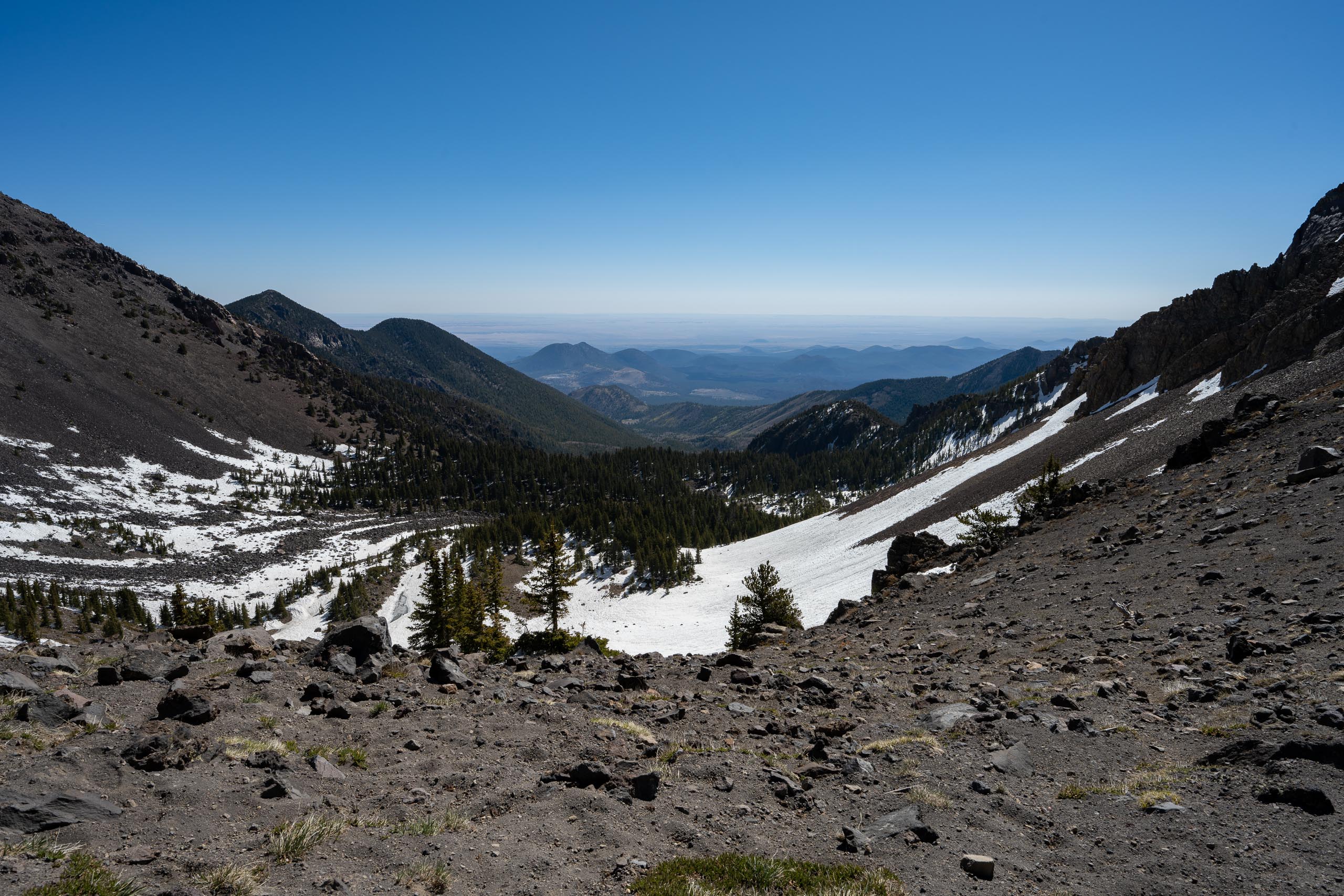 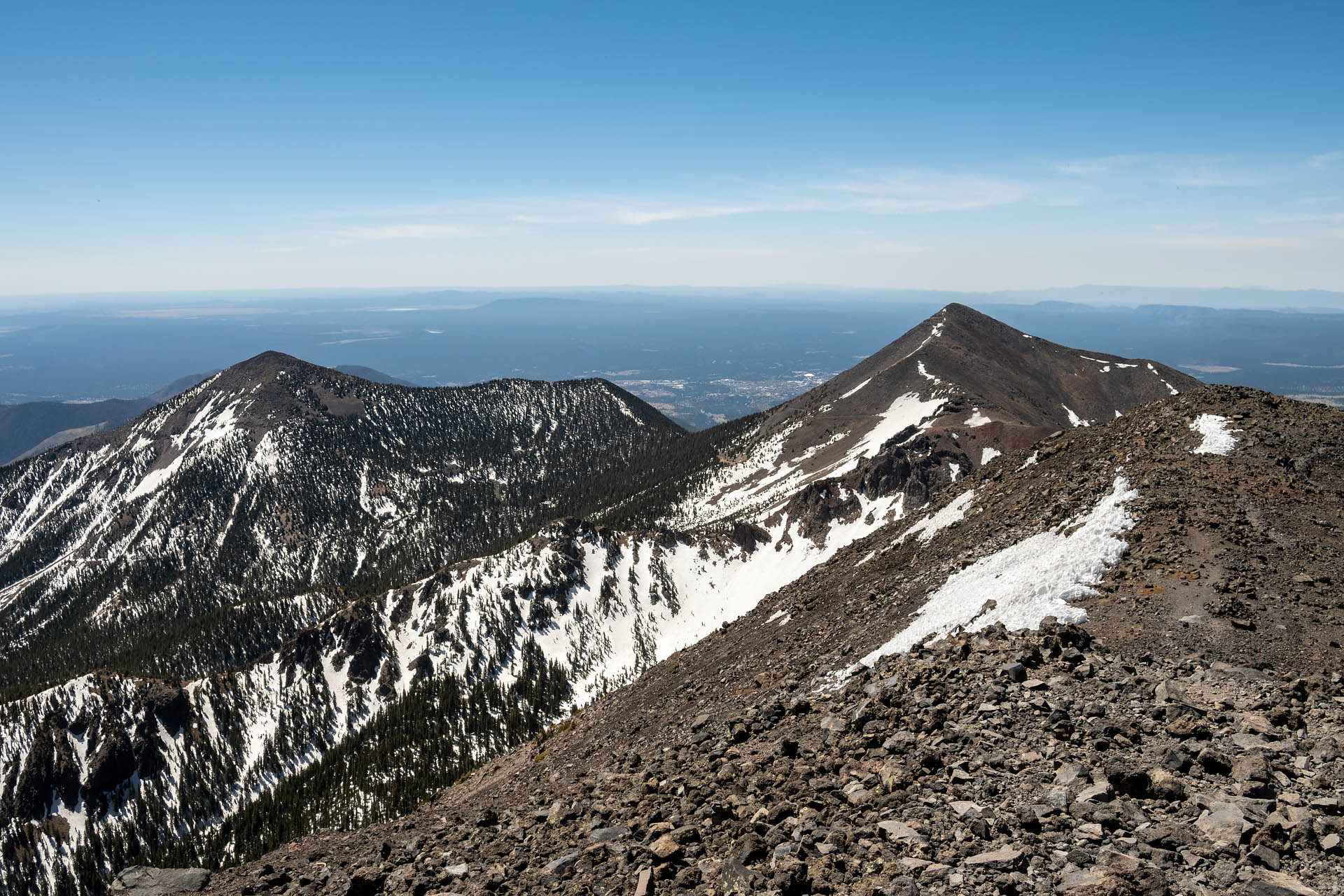 From the saddle (~11,700 feet), it’s about a mile to Humphreys’ summit. The trail steepens here as it ascends the final pitch, gaining about 800 vertical feet over varying terrain – including granite slabs, basaltic rocks, and loose sand. The habitat here is considered fragile alpine tundra, so please take care when traversing this section. Large, regularly interspersed stakes clearly mark the trail to the top, so it’s pretty easy to stay on course if you pay attention. 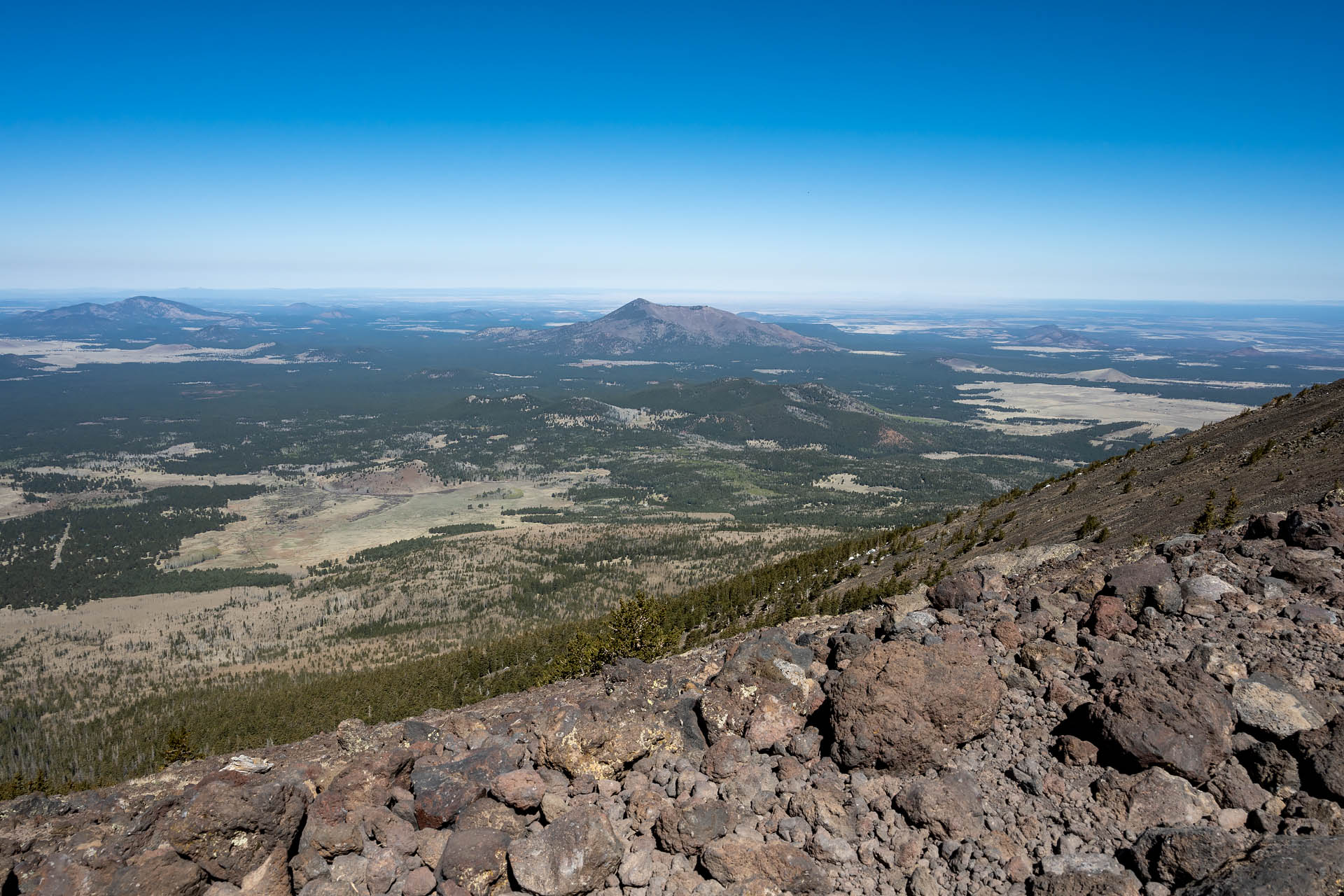 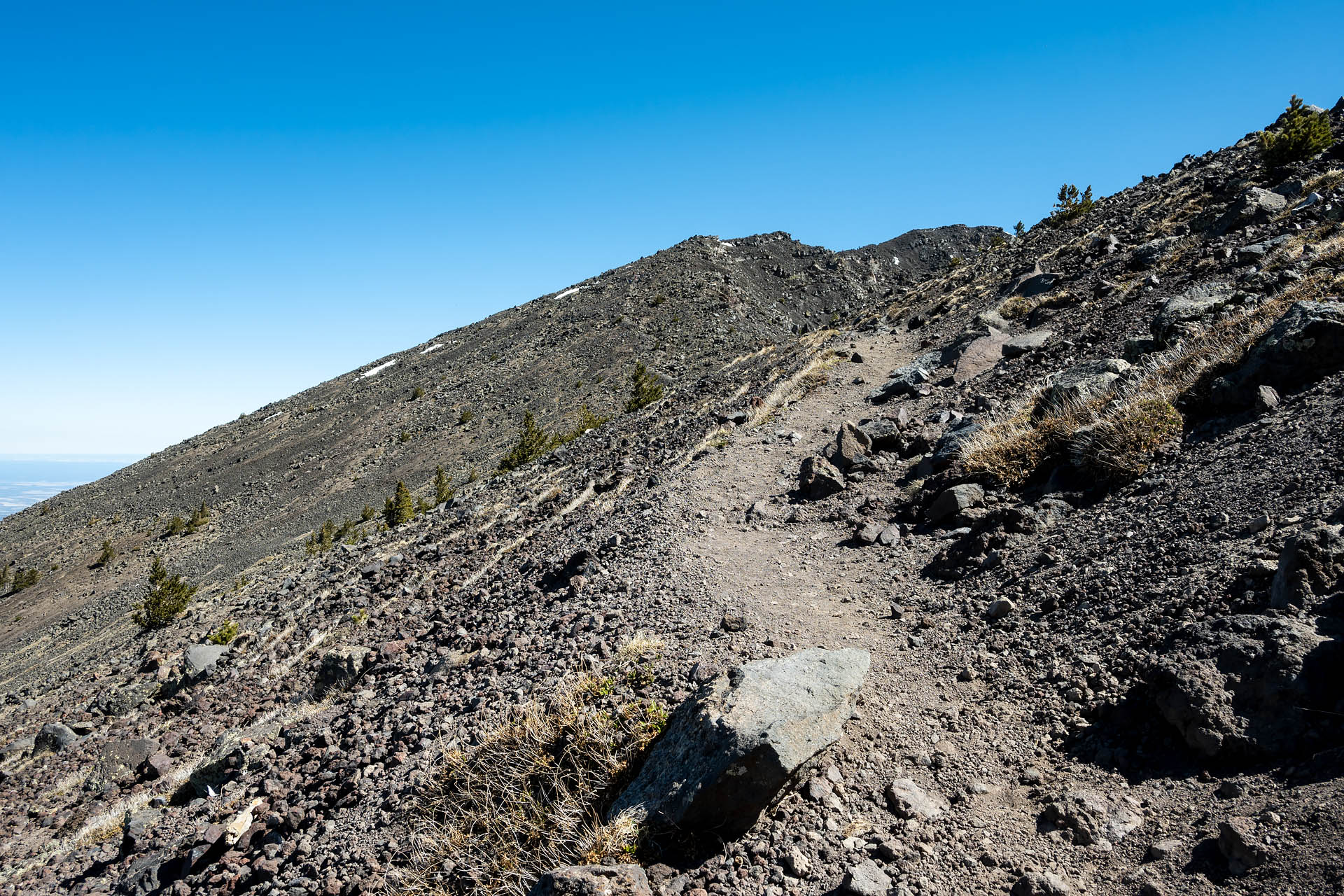 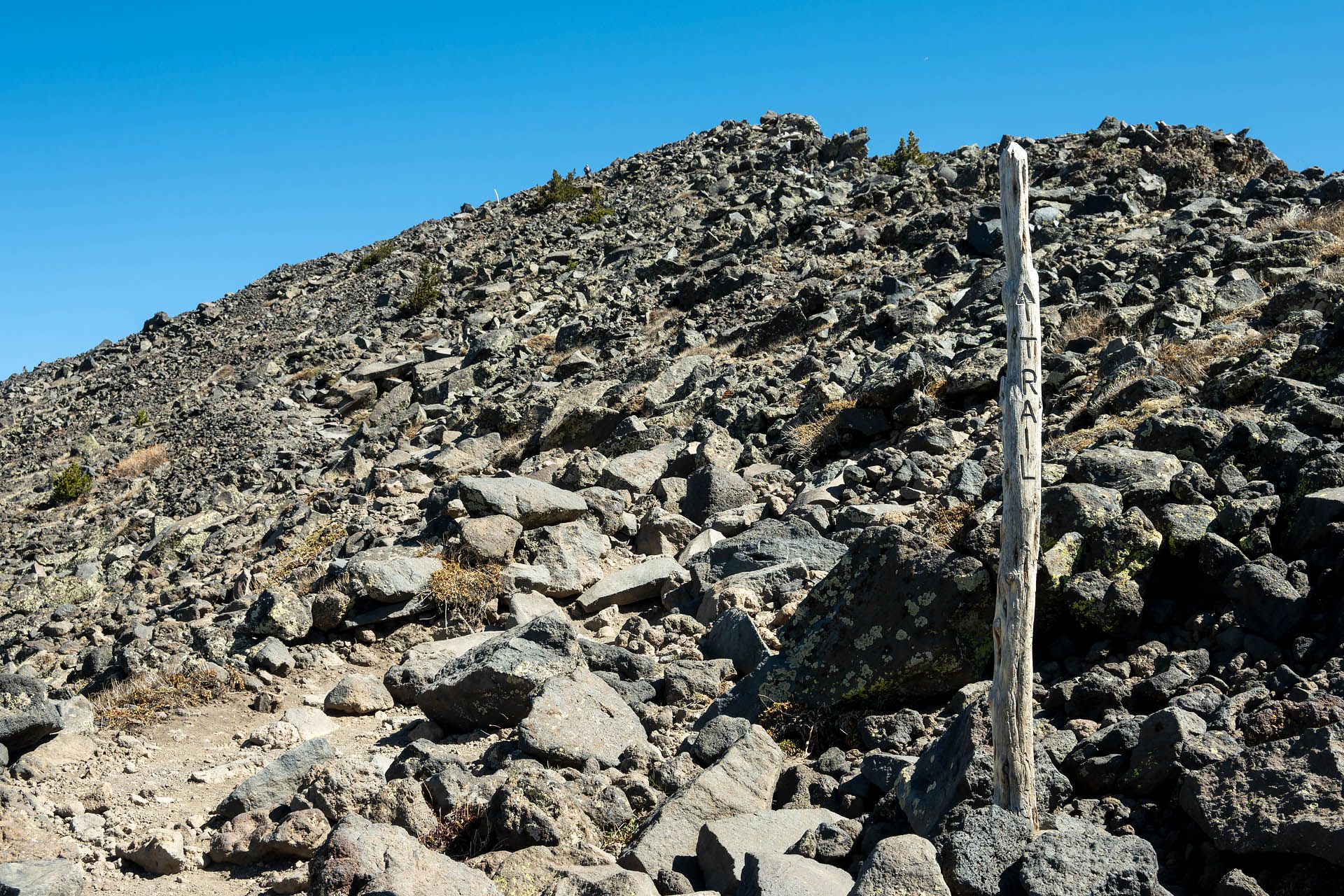 As we made the final push to the summit, we passed a few retreating snowfields peppered with penitentes. The unique shapes form in dry, high-elevation air when the snow sublimates – transforming straight to water vapor without evaporating to a liquid. The sharp blades of ice are named for their likeness to the tall, pointed hats worn by penitents during the Spanish Holy Week. We were totally captivated by these repenting razors, and only wish the light had been a little less severe for taking photos. 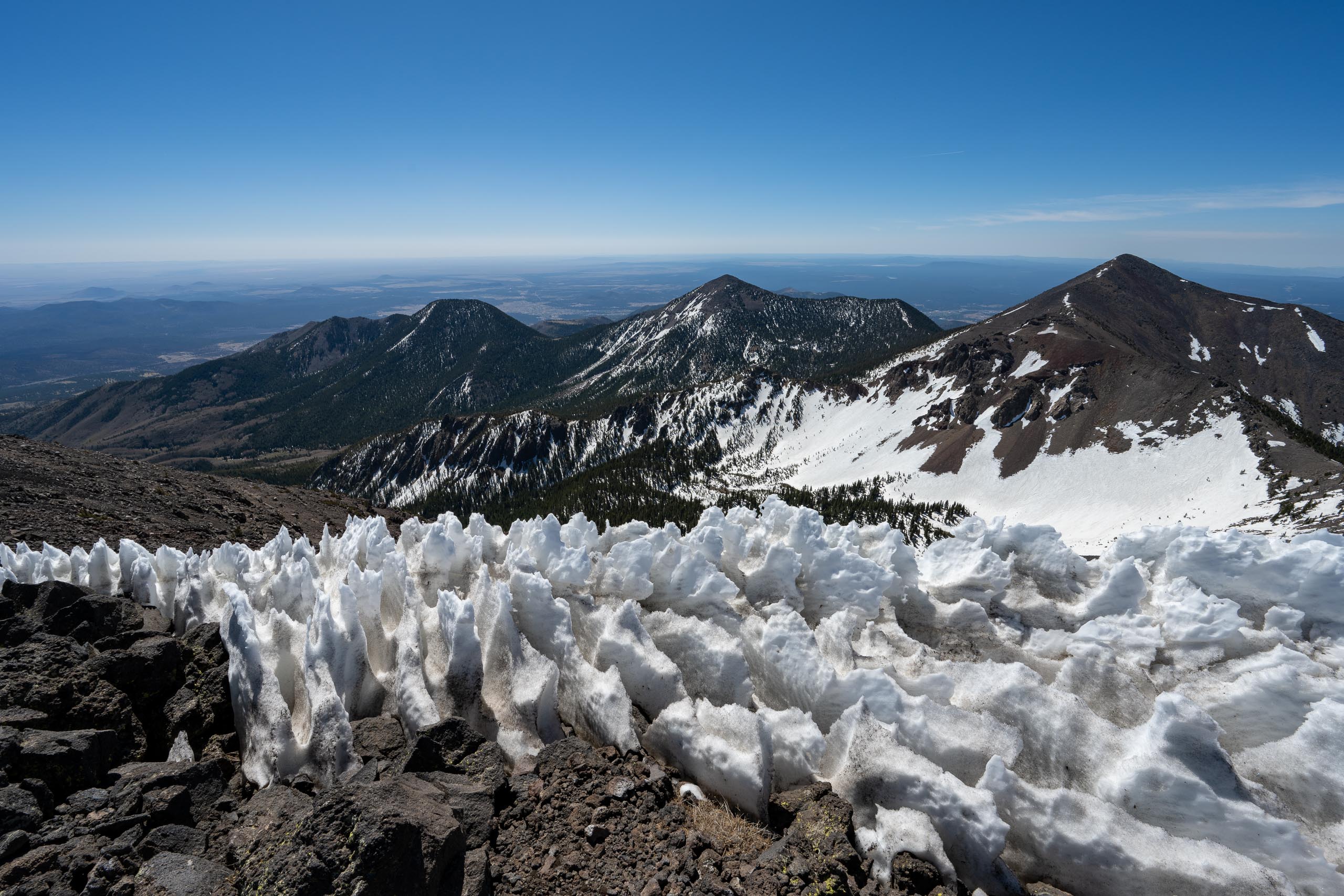 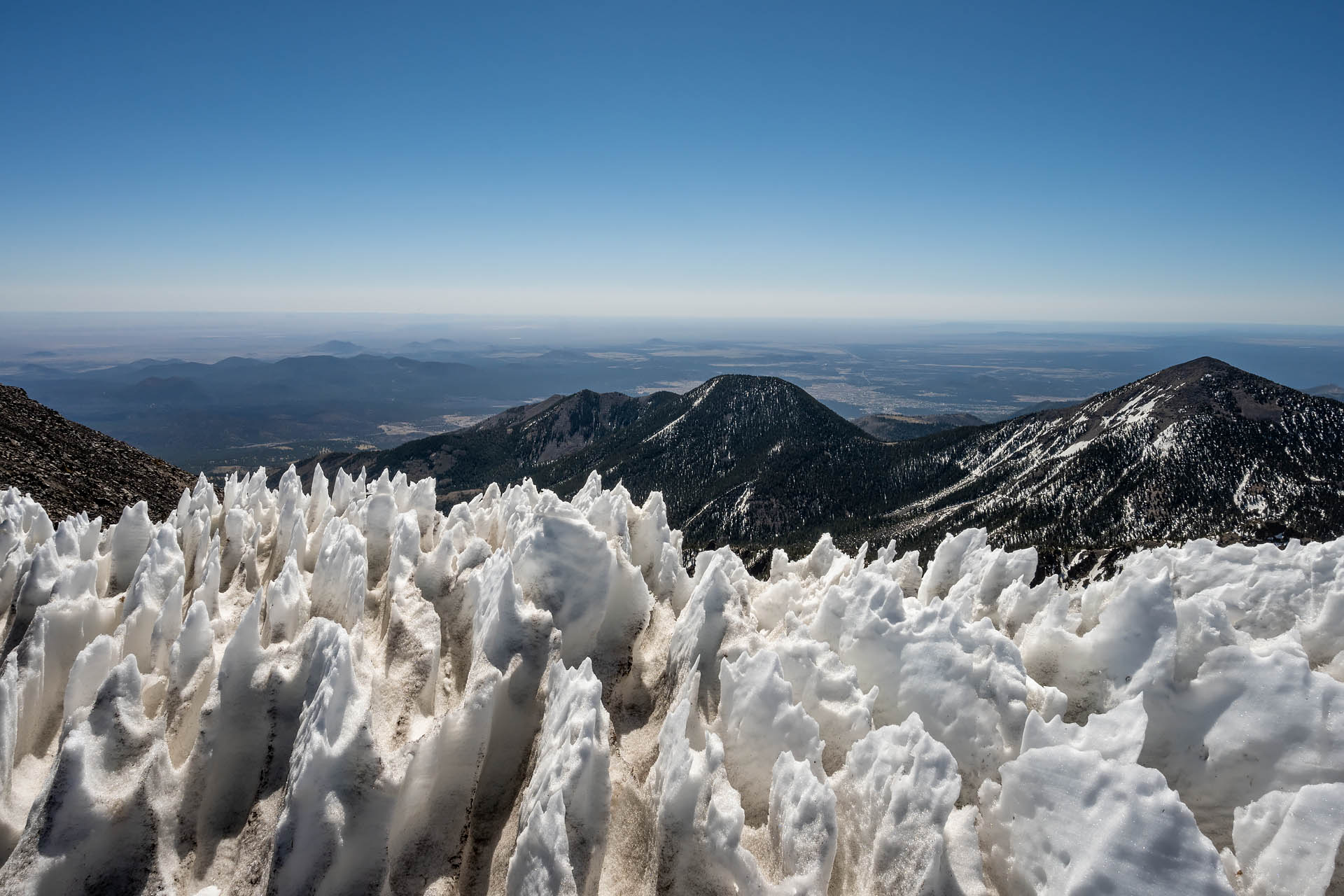 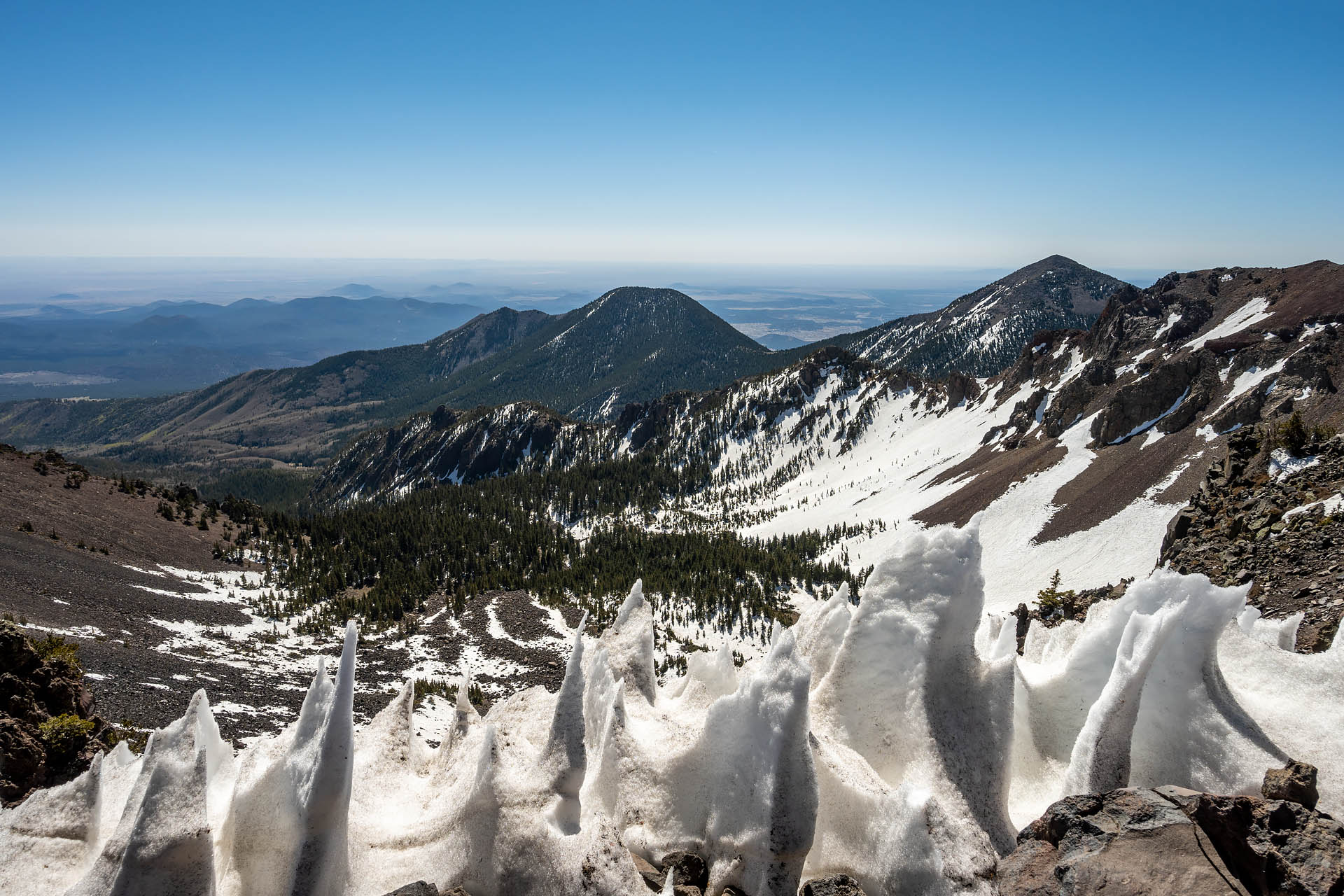 When we finally reached the highpoint, we were treated to views out to the Grand Canyon, some sixty miles north, as well as views of the Painted Desert and Sunset Crater to the east. While the views were certainly sweeping, the sky was filled with a pretty thick haze thanks to a combination of unseasonably warm air and residual smoke from the Tunnel Fire that was smoldering just a few miles east. 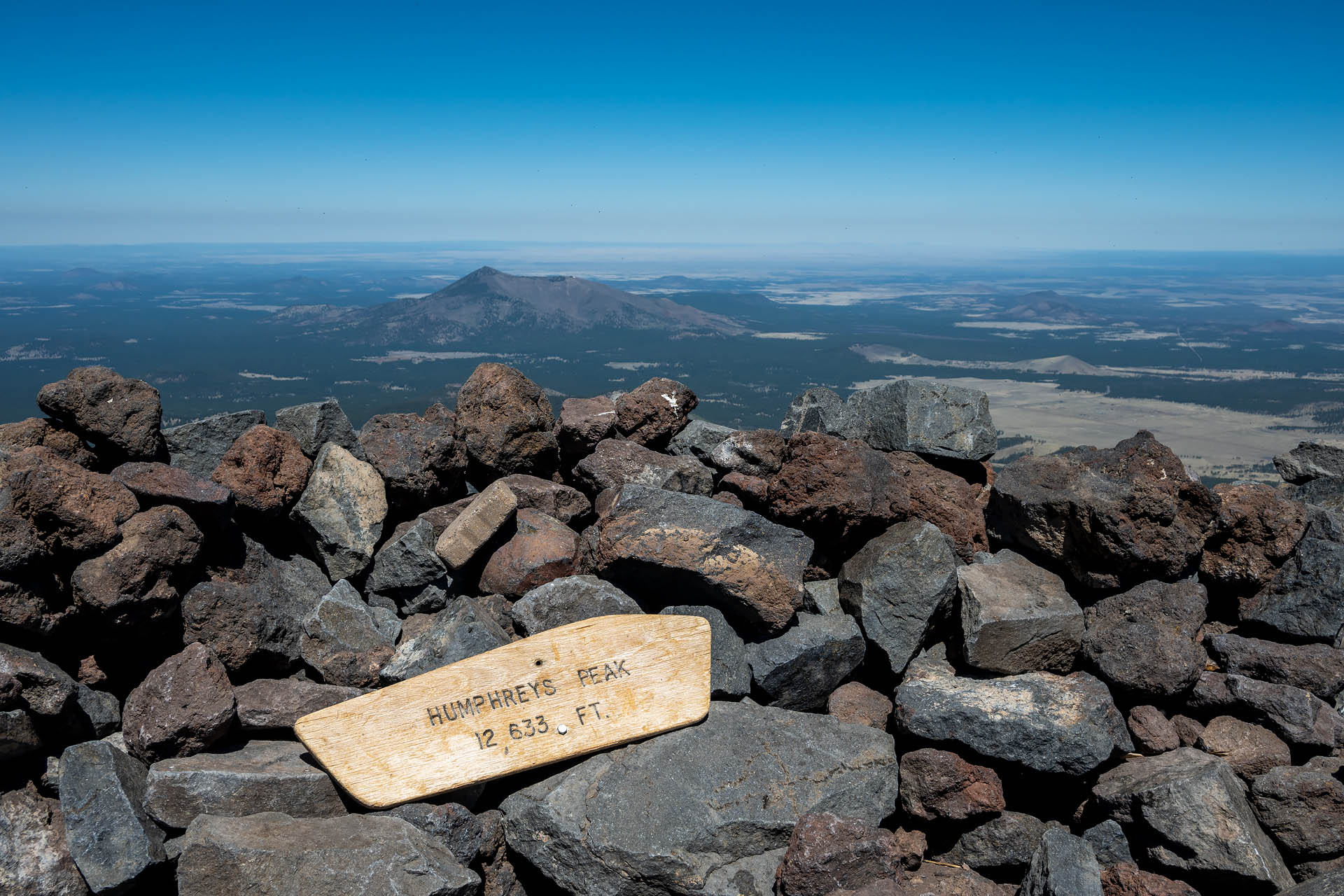 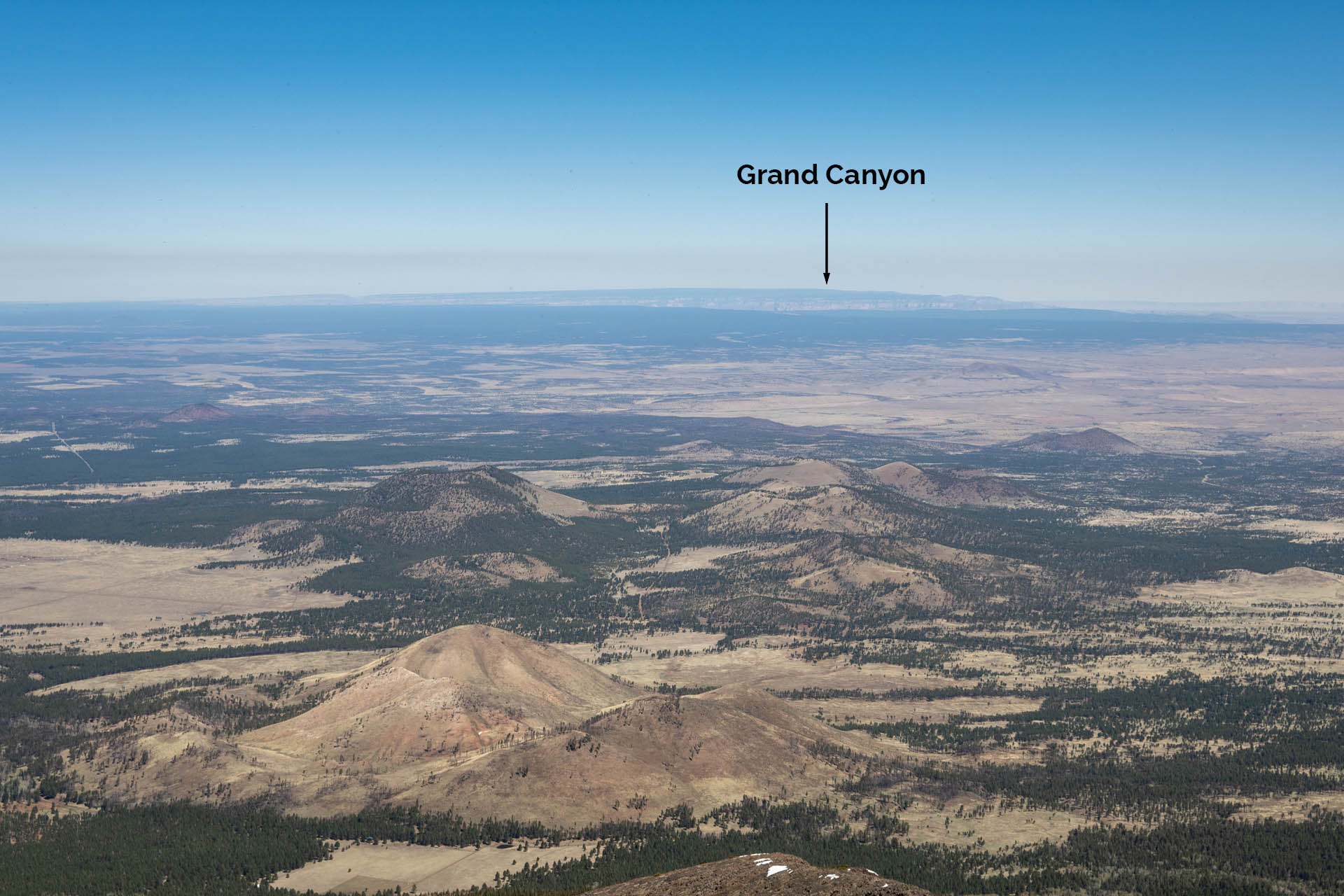 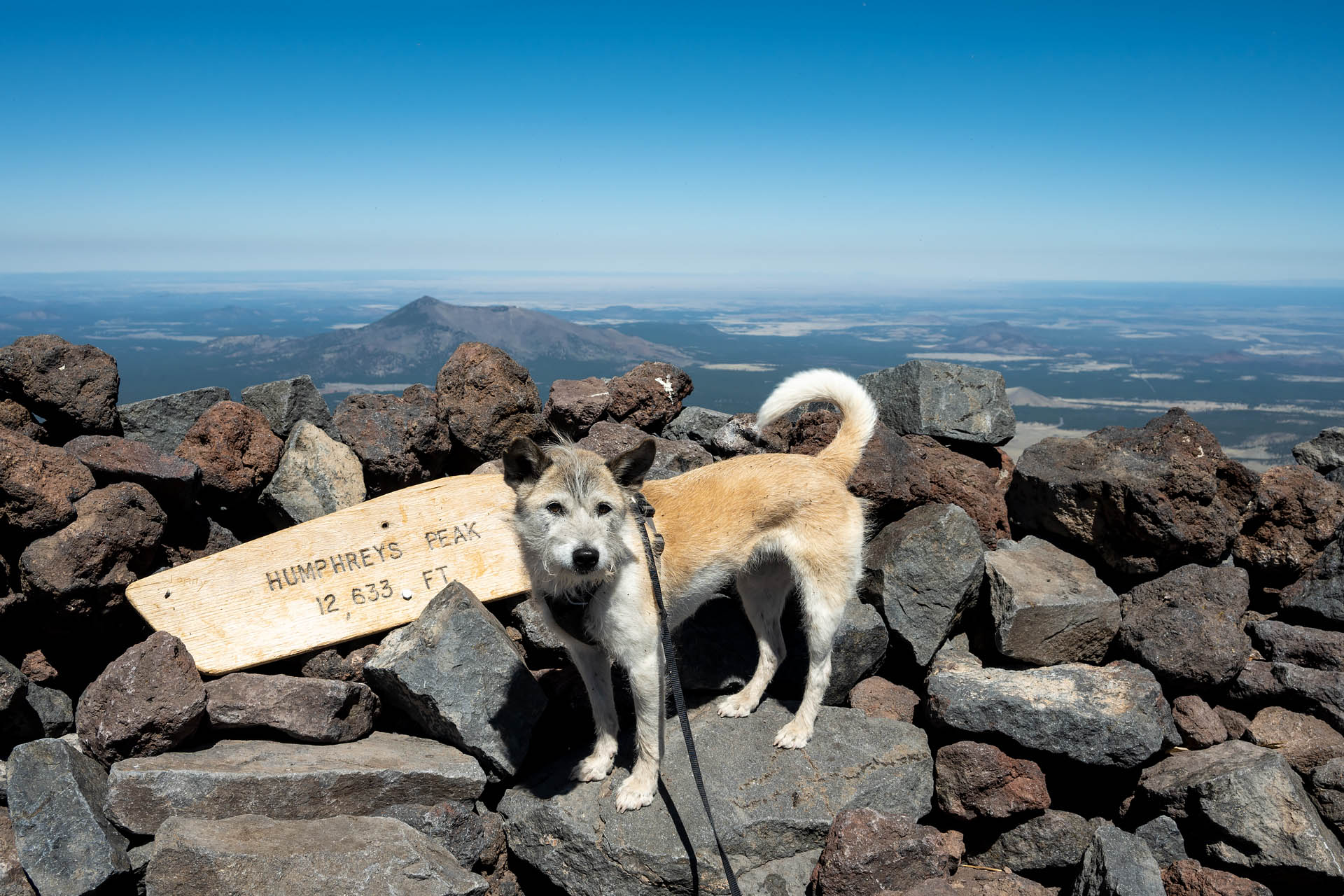 In addition to the haze, we encountered one of the most unreal swarms of bugs we’d ever seen. It was a plague of biting gnats of Biblical proportions. When we first headed out that morning, we were pumped that there was virtually no wind in the summit forecast – especially after enduring a week of 50 to 70 mph gusts. When we reached the top, however, we were begging for a breeze. I can’t think of many times where I’ve climbed above 12,000 feet and stood there wishing for the wind to pick up. What’s more, I think it was the first time ever we bailed on food entirely and just hightailed it for lower elevation. While it was a good day on the trail, it ended up being a literal summit tag. 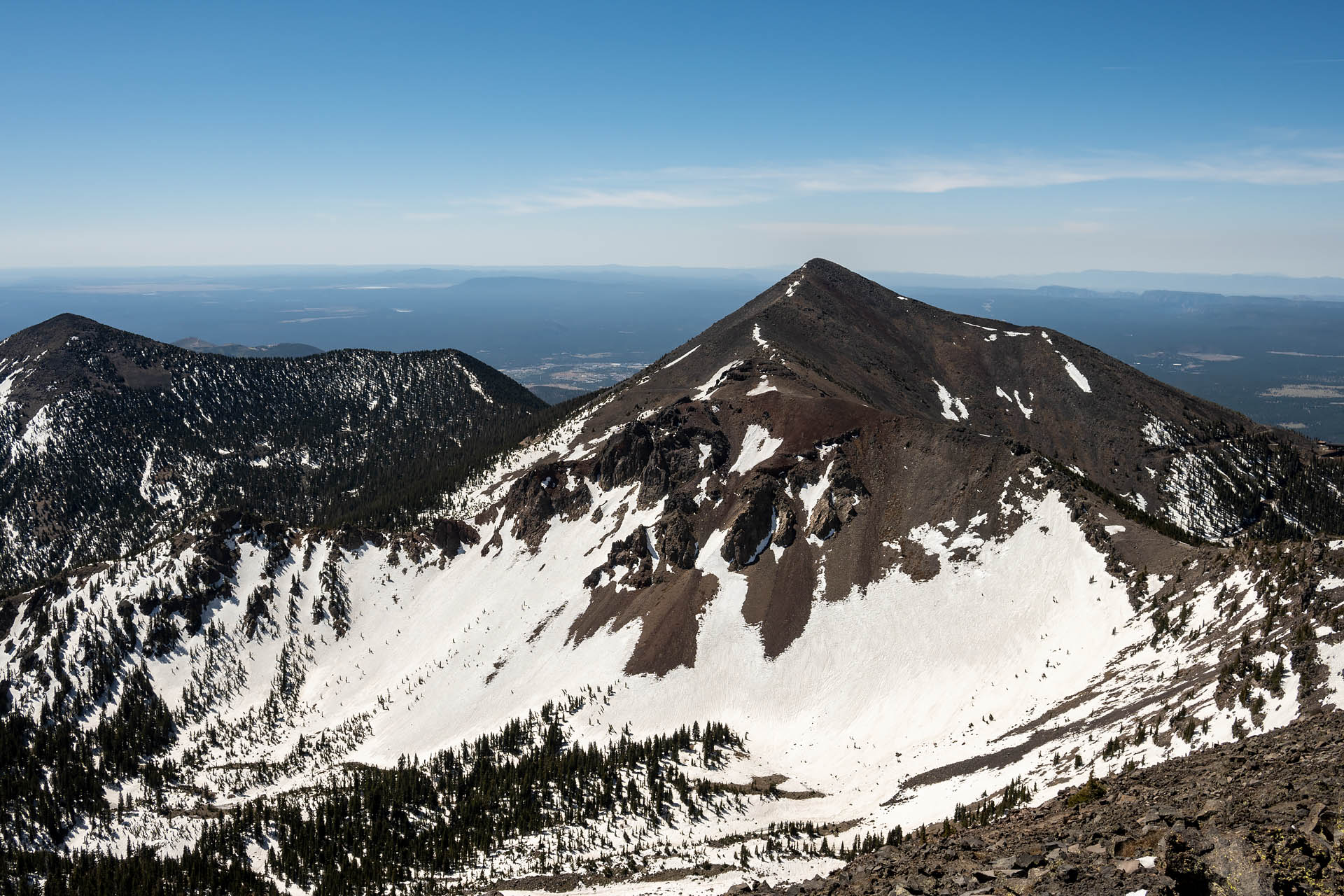 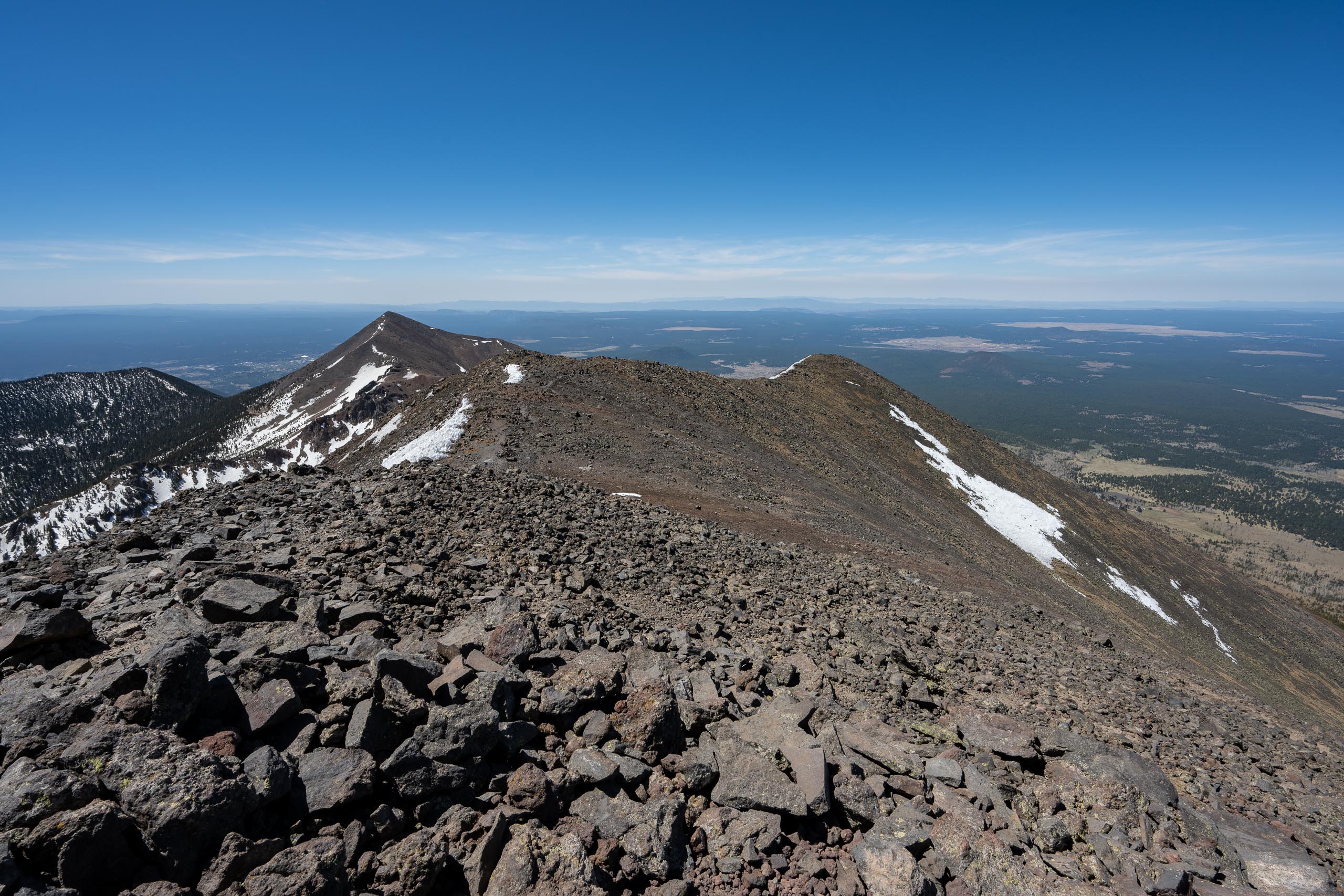 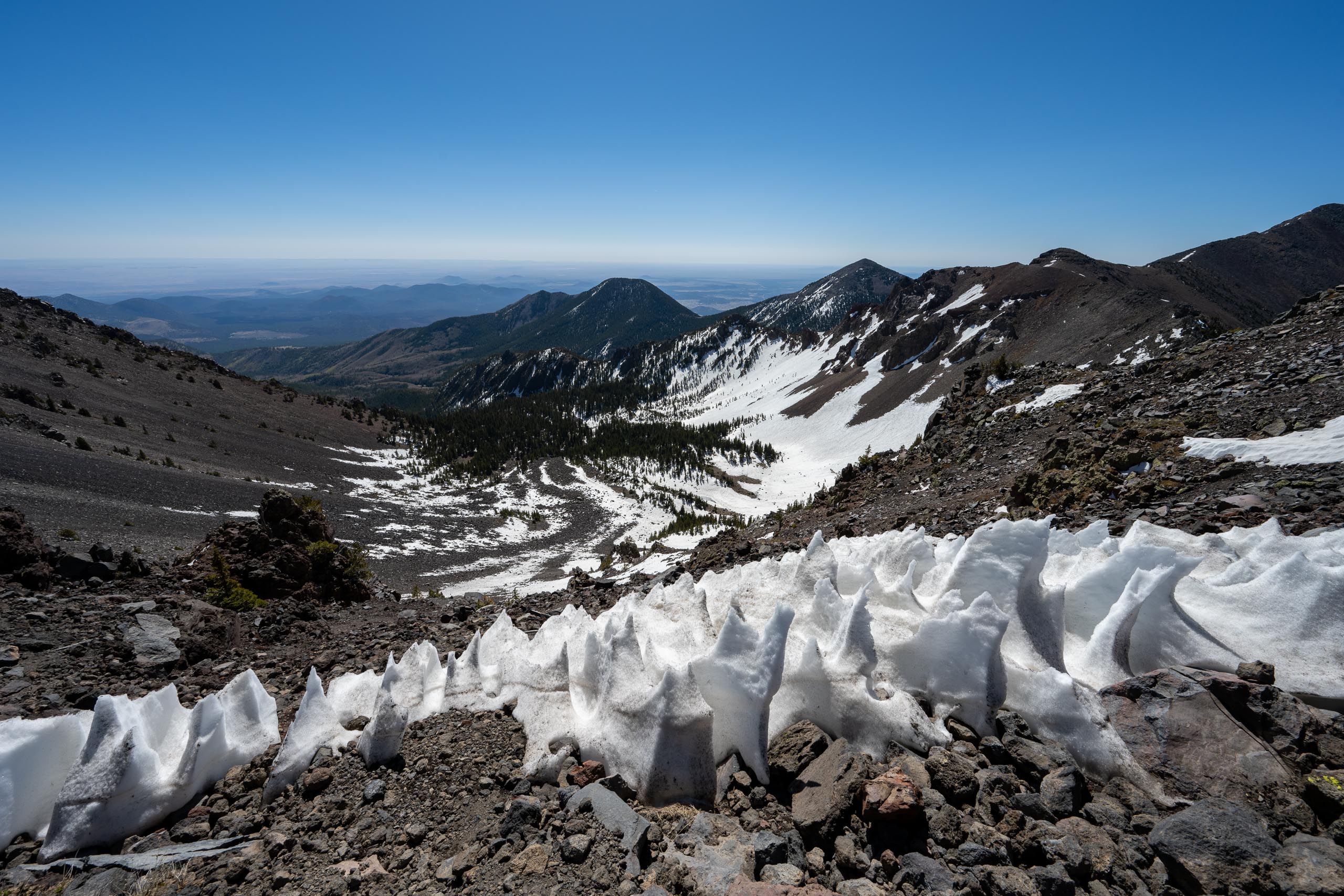 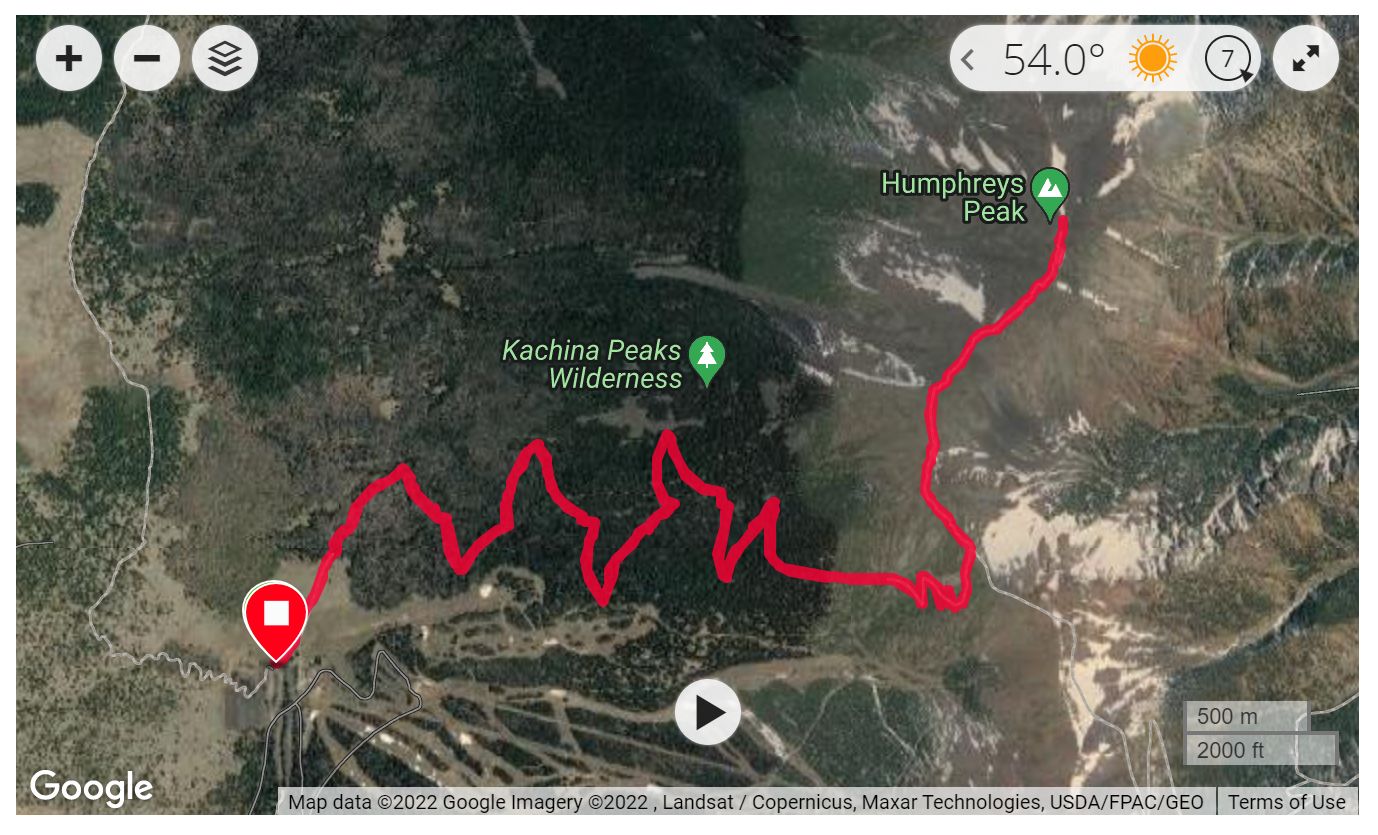 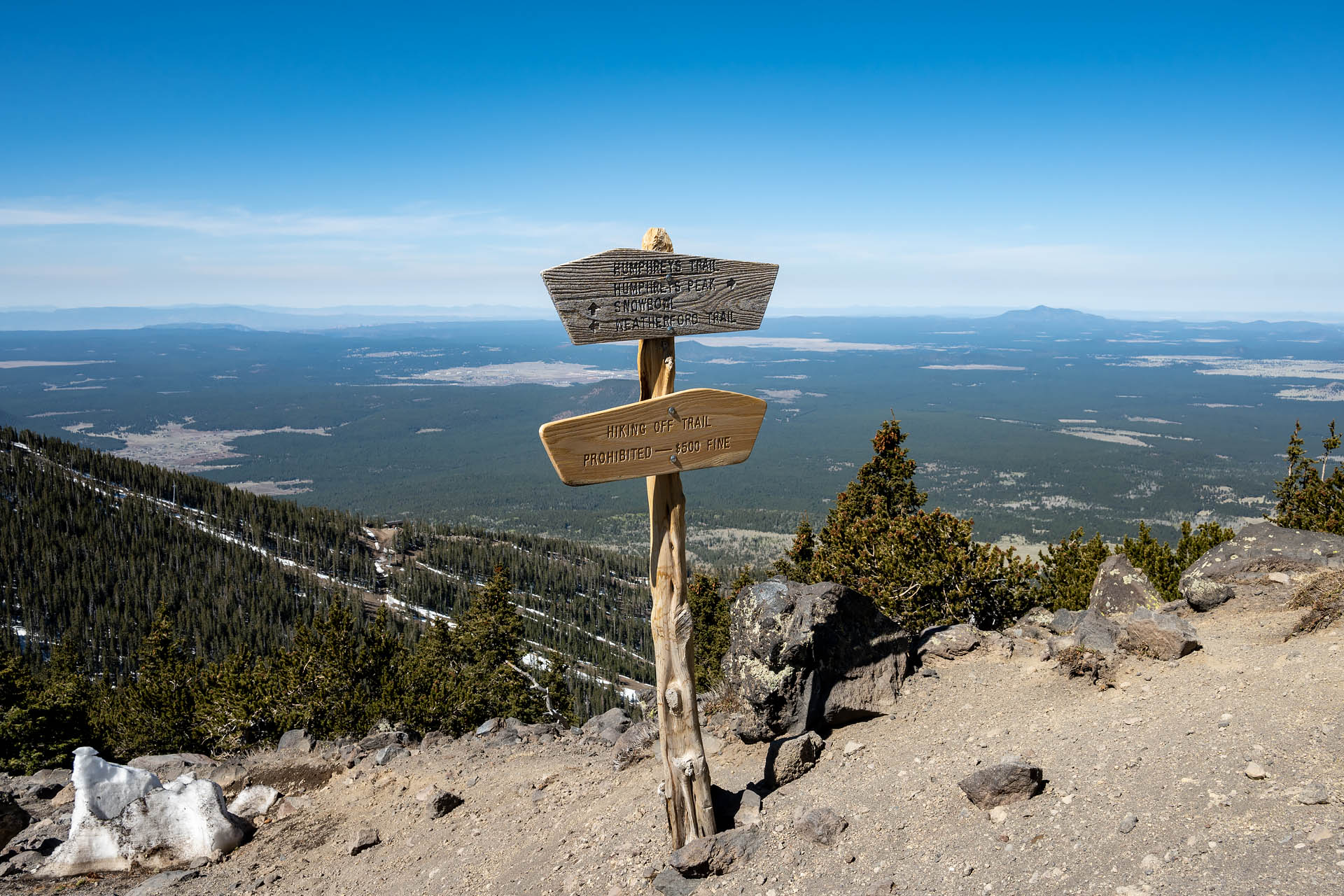