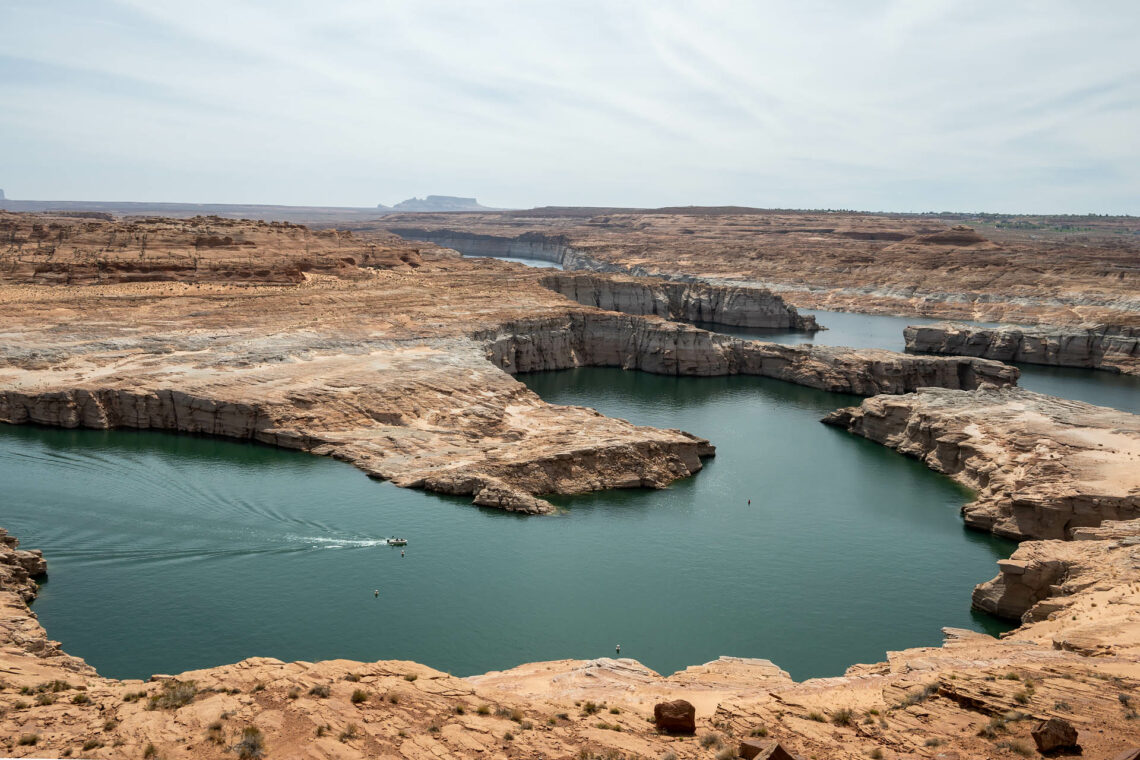 One of the largest reservoirs in the U.S., Lake Powell was created as a result of Glen Canyon Dam’s construction in the 1960s. Today, this vast store of Colorado River water provides hydroelectric power to millions of local residents, as well as water for the Lower Basin states of Nevada, California and Arizona.

While the dam supplies power, water and recreational opportunities for millions of people, its environmental and cultural impacts have been debated since its creation. Flooding the canyon sixty years ago inundated precious archeological sites as well as native flora and fauna. Today – just decades after its controversial creation – climate change and unsustainable withdrawals are already threatening the lake’s long-term practicality.

Taken together, it’s easy to see why the lake has remained a polarizing paradox for the duration of its relatively short history. With the consequences of Lake Powell’s past and the rapidly emerging questions of its future, it kind of begs the question: What are we doing and at what cost?

A river and reservoir in crisis

Lake Powell’s water levels have been declining rapidly since 2000, due largely to the fact that the southwest has been suffering from its worst megadrought in 1,200 years. Startling satellite images show the severity of the shrinking Colorado River and its second-largest reservoir, and are really kind of disconcerting.

Warming temperatures, dwindling precipitation, increased demand for water, and chronic overuse are collectively putting irrecoverable pressure on the reservoir and, more importantly, on the Colorado River. The once-wild ecosystem now serves as the primary water and power source for 40 million people across seven western states. Not only have we directly and irreversibly altered a 1,500-mile-long riparian community, but we’ve now even exhausted the resource for our own benefit, with the first water shortage in history being declared last year.

As our visit in April 2022, Lake Powell was around 24% full – a whopping 177 feet below full pool. Not only are water levels dwindling, but the reservoir is also shrinking in terms of capacity. Since 1963, Lake Powell has lost 7% of its storage capacity due to increased sediment flow. With the lake currently a mere 120 feet above ‘dead pool,’ it’s clear that we need to find a sustainable and permanent alterative to the current Colorado River crisis.

Whatever side of the issues you stand on, what’s going on at Lake Powell is definitely food for thought… and thinking critically is certainly something we could all be doing a little more of as of late. Whether you view Lake Powell as a triumph or tragedy, the surrounding landscape is unquestionably striking, and we couldn’t leave the area without quickly scoping out the scenery for ourselves.

If you’re short on time or just looking to spend a couple hours exploring the lake, the southwest arm of the Lake – Wahweap Bay – is the most accessible from Page and the Glen Canyon Dam. From Highway 89, Lakeshore Drive runs five miles north from the Glen Canyon Dam Bridge to the Wahweap Marina, passing by two scenic overlooks: Navajo Mountain Overlook and Wahweap Viewpoint. Additionally, the popular Lake Powell Lookout Point (Wahweap Overlook) can be reached via a mile-long, dead-end road off Highway 89. 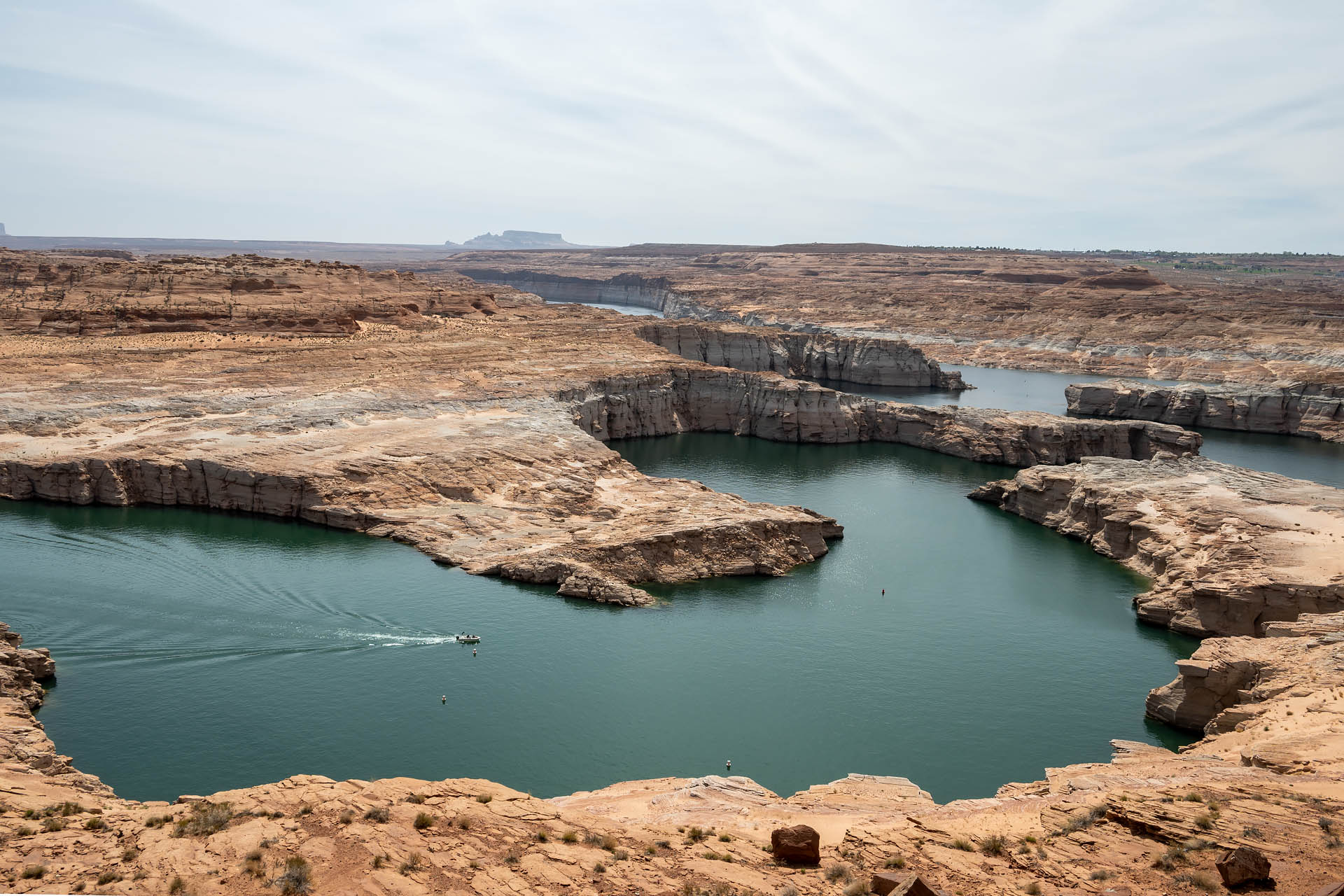 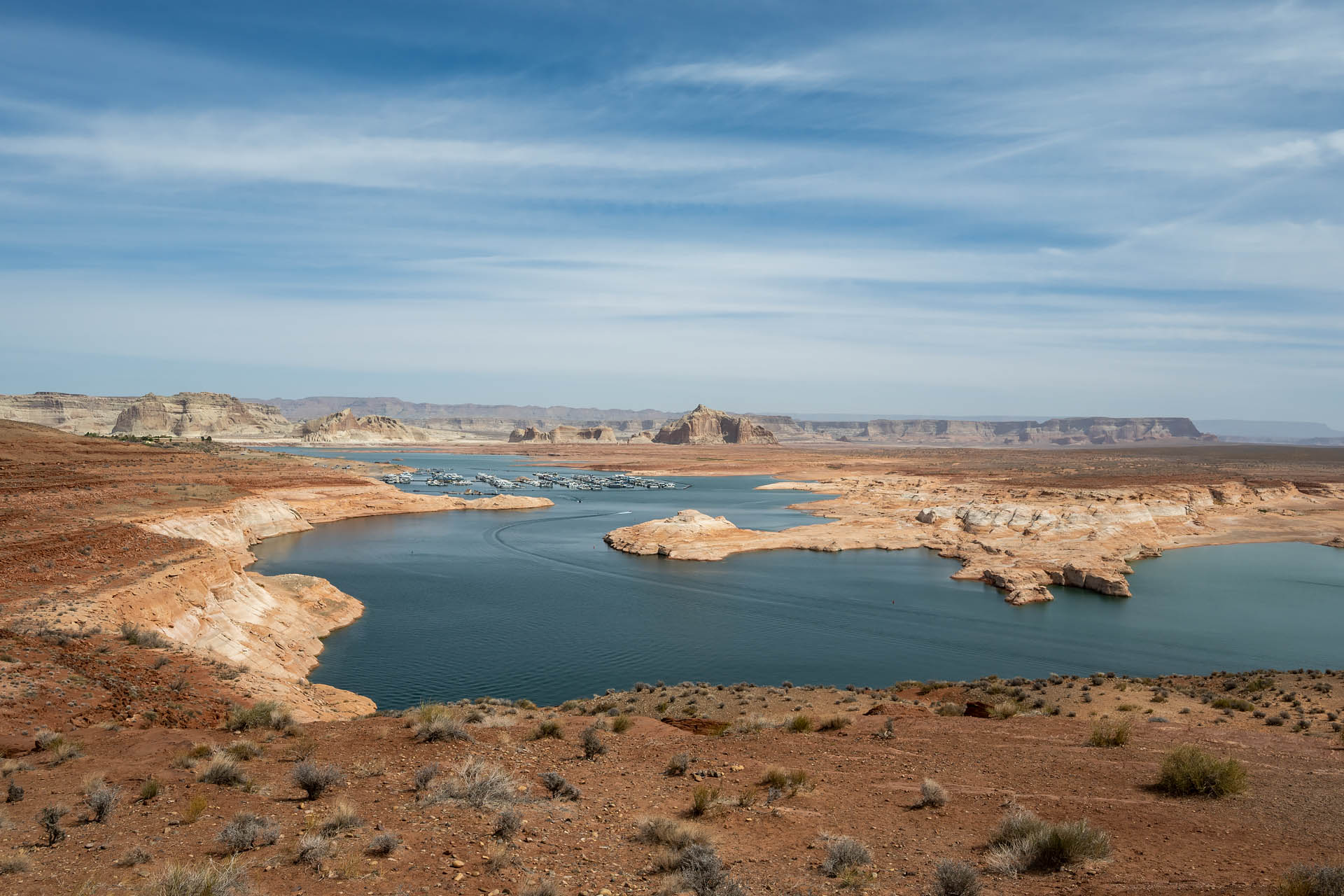 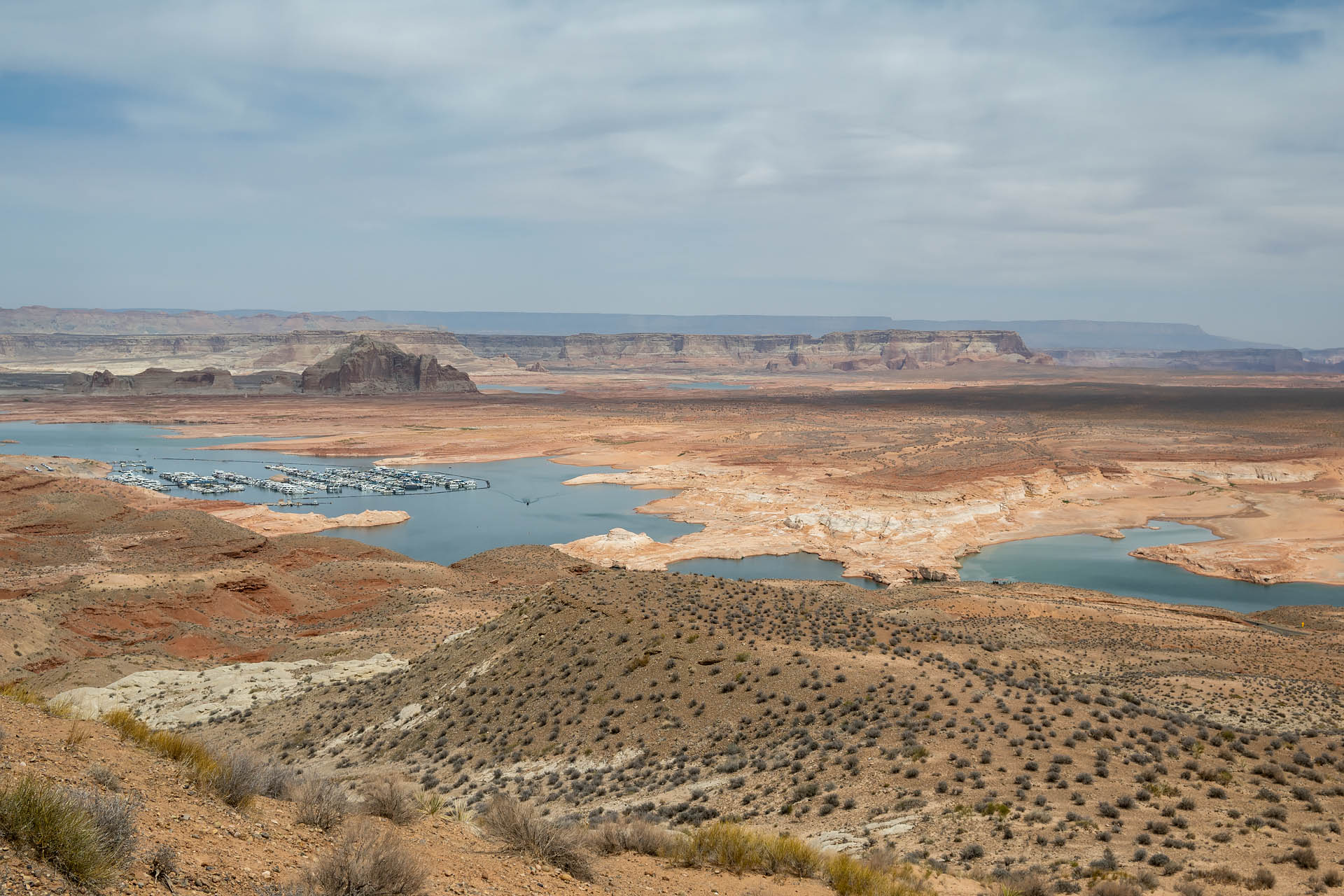 After checking out the handful of overlooks, we decided to head up to Lone Rock Beach – about eight miles north of Wahweap Marina, just over the border in Utah. Aptly named, Lone Rock is a towering monolith that typically juts out of the blue waters of Wahweap Bay. Today, however, the large inlet surrounding the megalith is nothing more than a desiccated mudflat. 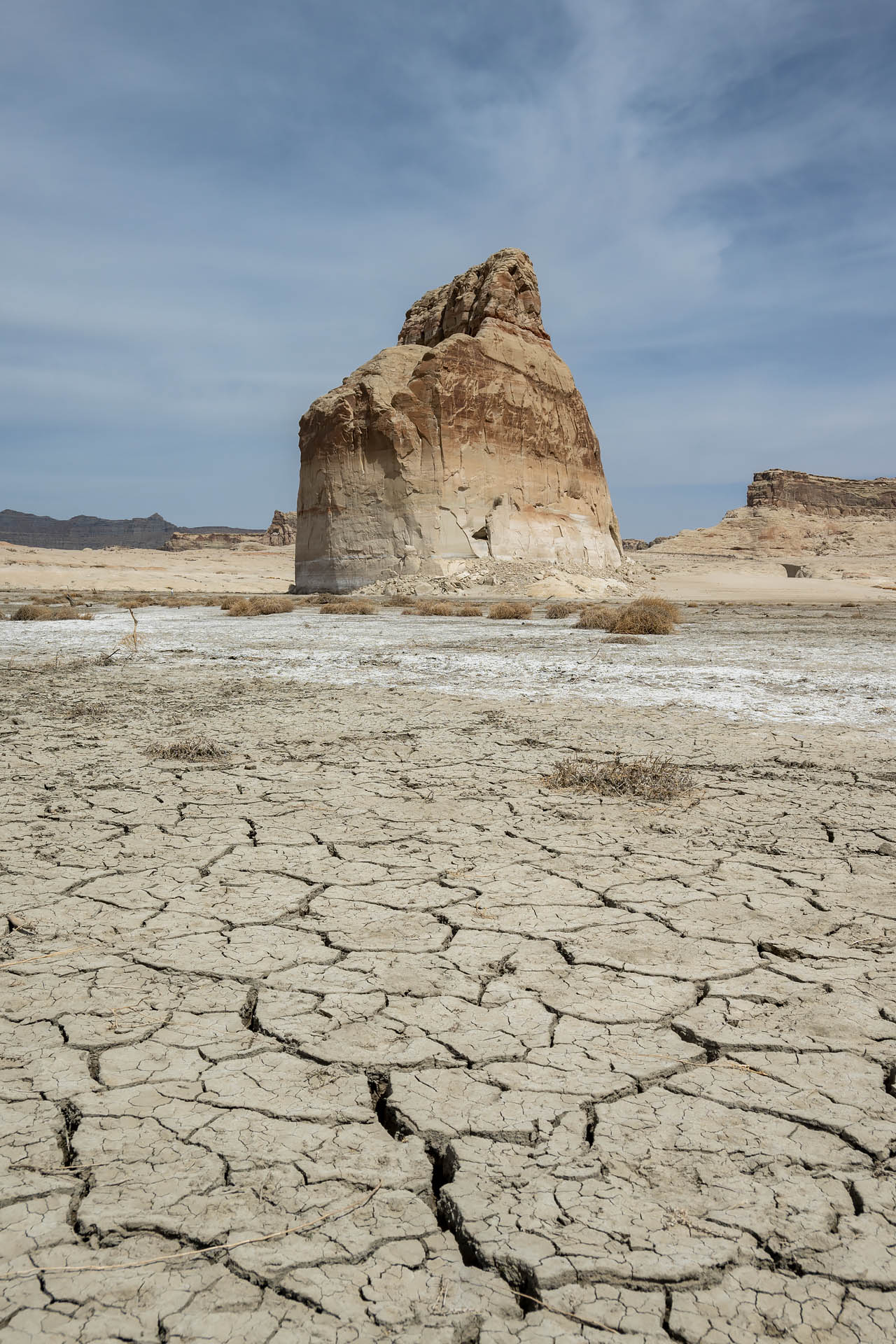 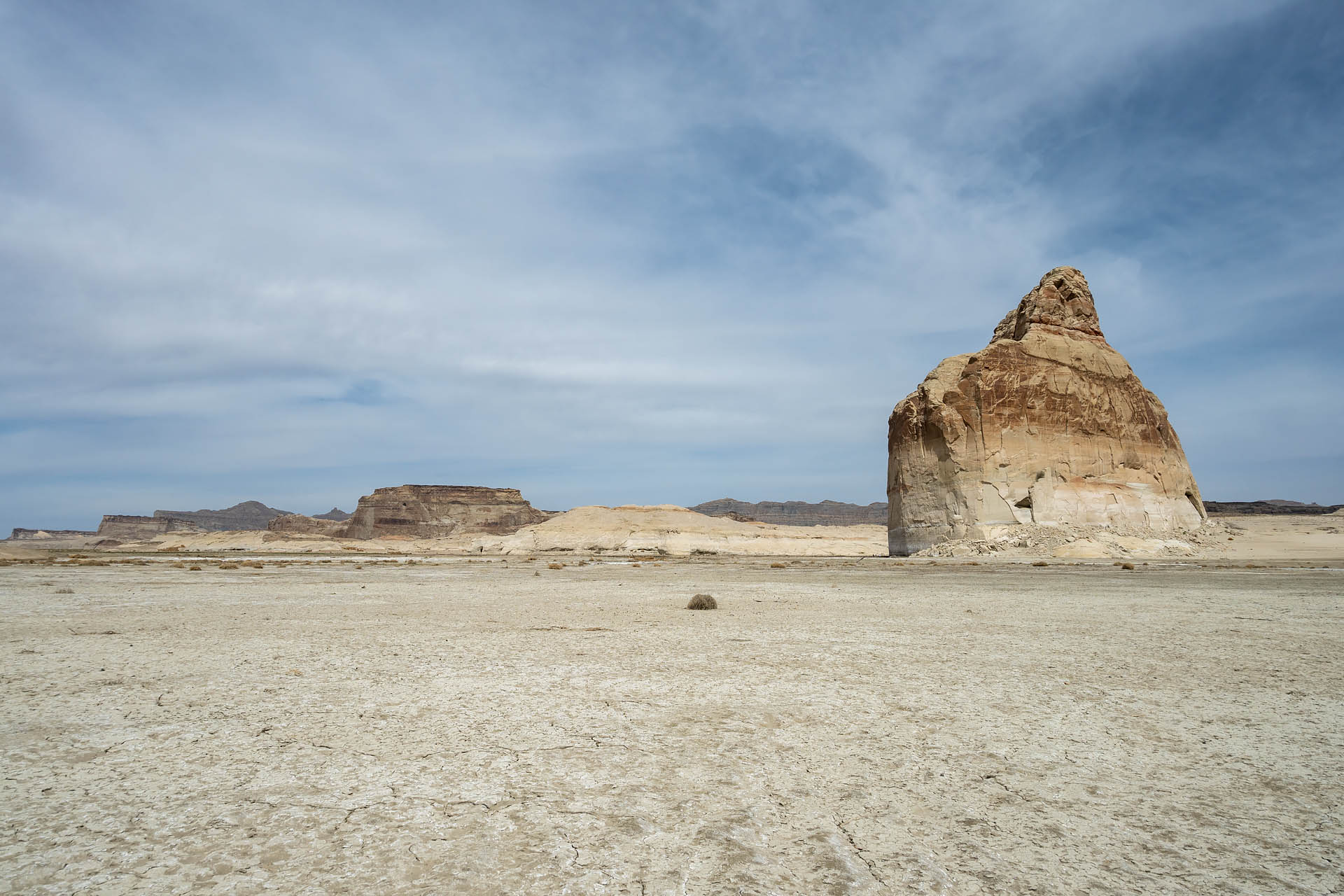 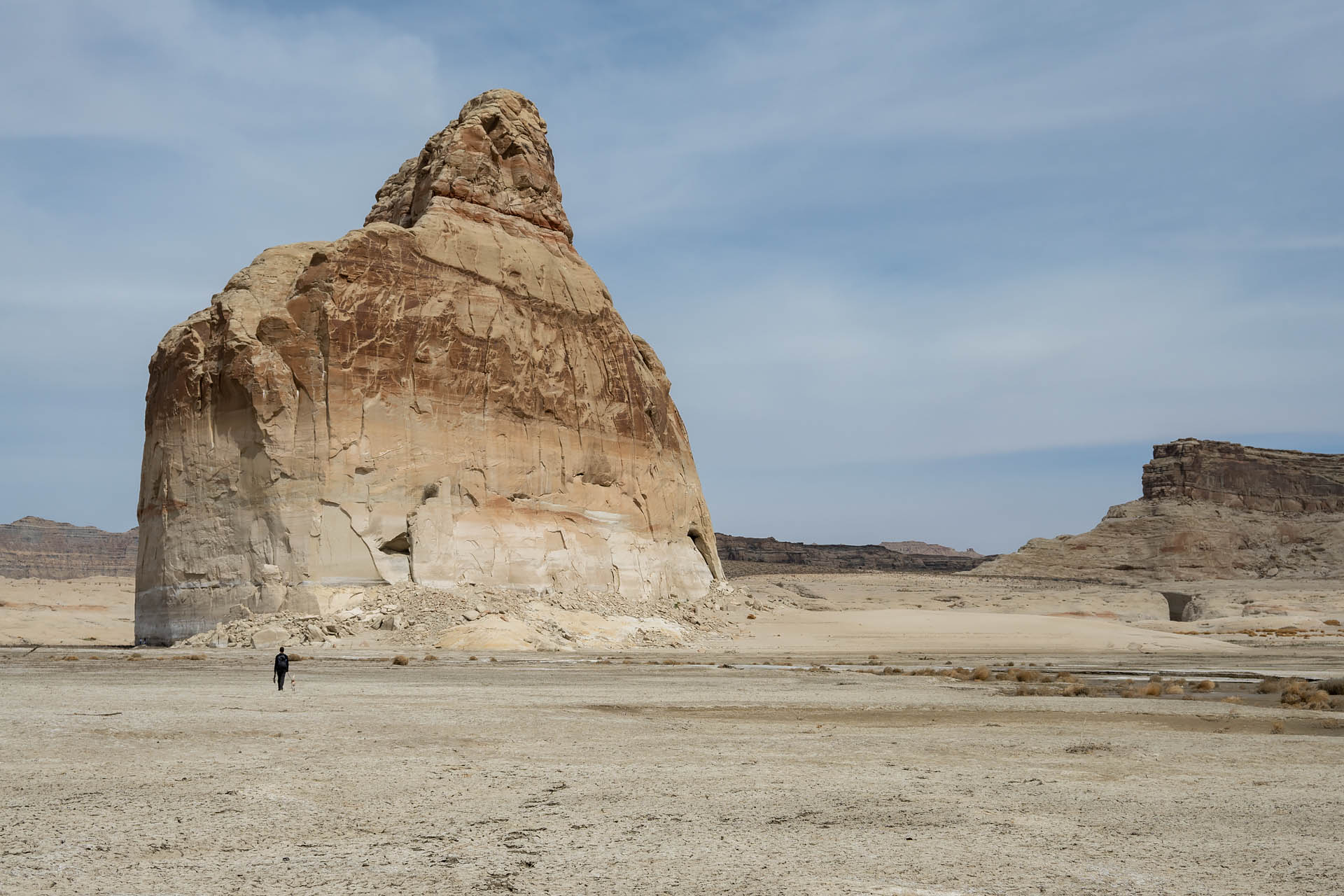 While the landscape here is still quite eye-catching, the desiccated bay and bleached ‘bathtub ring’ serve as stark reminders of the current water crisis as well as our own liabilities. All told, it was kind of an astonishing thing to be able to see firsthand.

Lake Powell is massive – 186 miles long with 1,960 feet of shoreline and 96 side canyons. Consequently, there’s a lot here to explore. In addition to a number of backcountry roads and canyoning opportunities in both Utah and Arizona, boating and water sports are also wildly popular. That said, with dwindling water levels comes dwindling accessibility. Many marinas and boat launches across the lake are currently closed indefinitely due to low water. For current information on closures and accessibility, check out the NPS website. 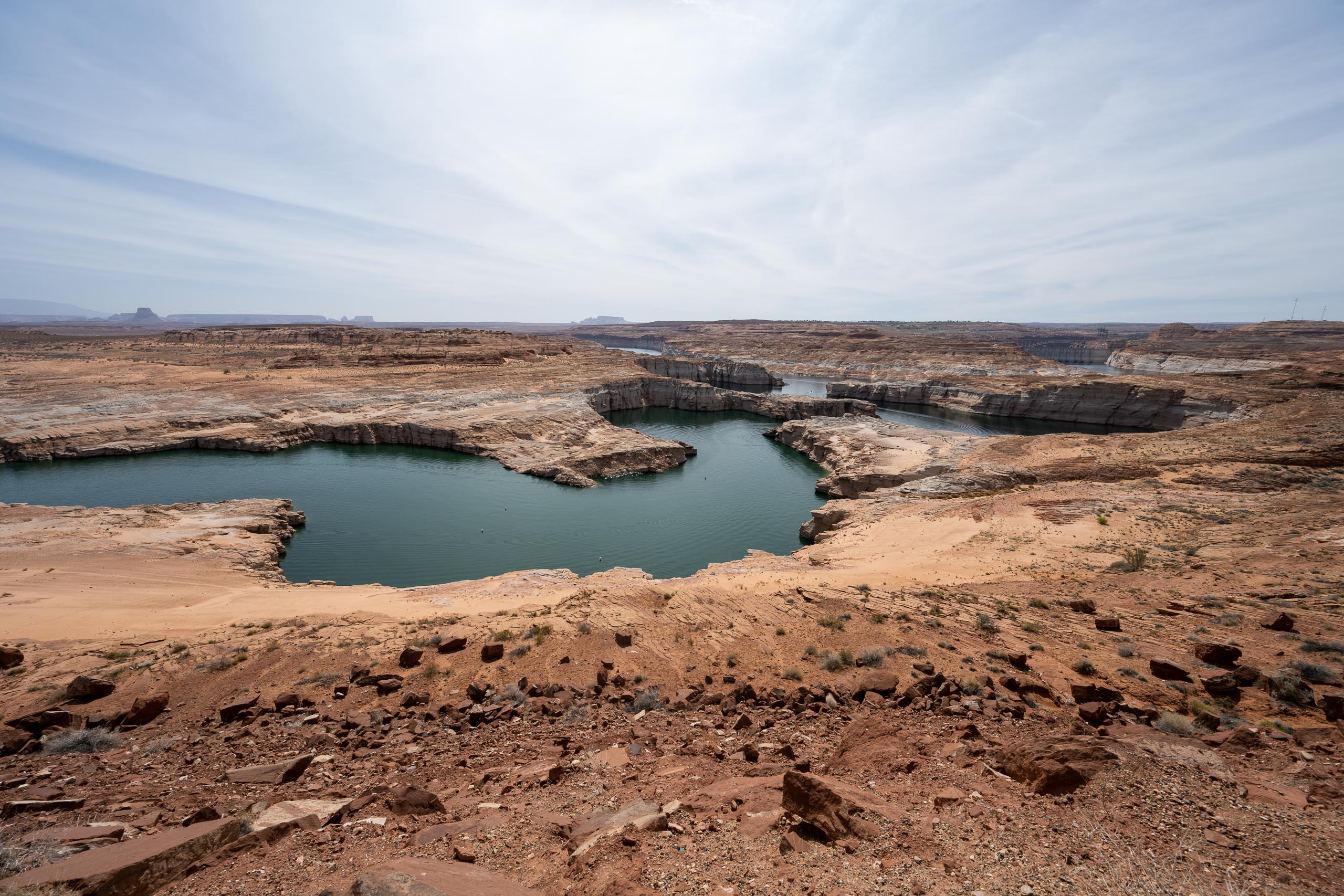 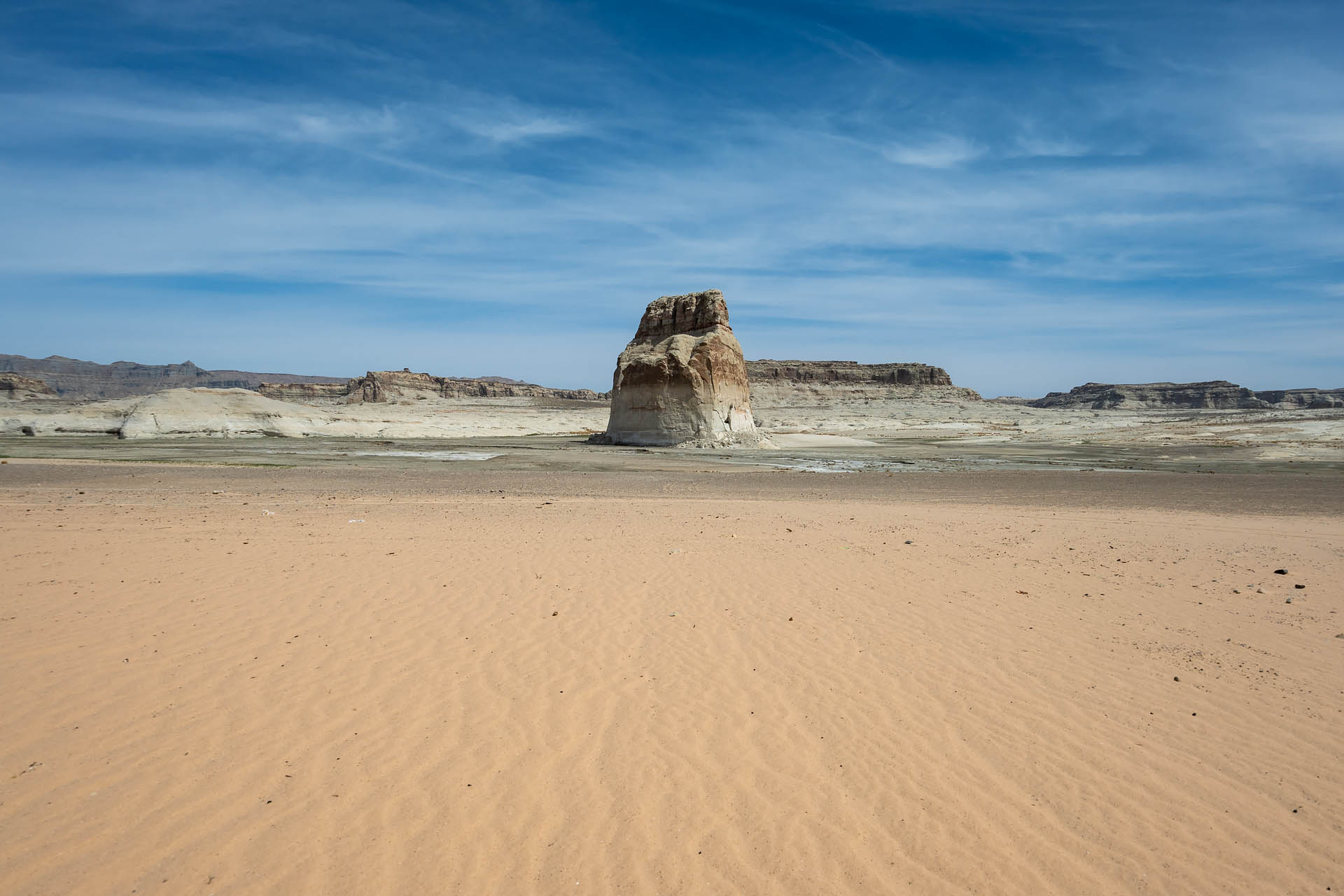 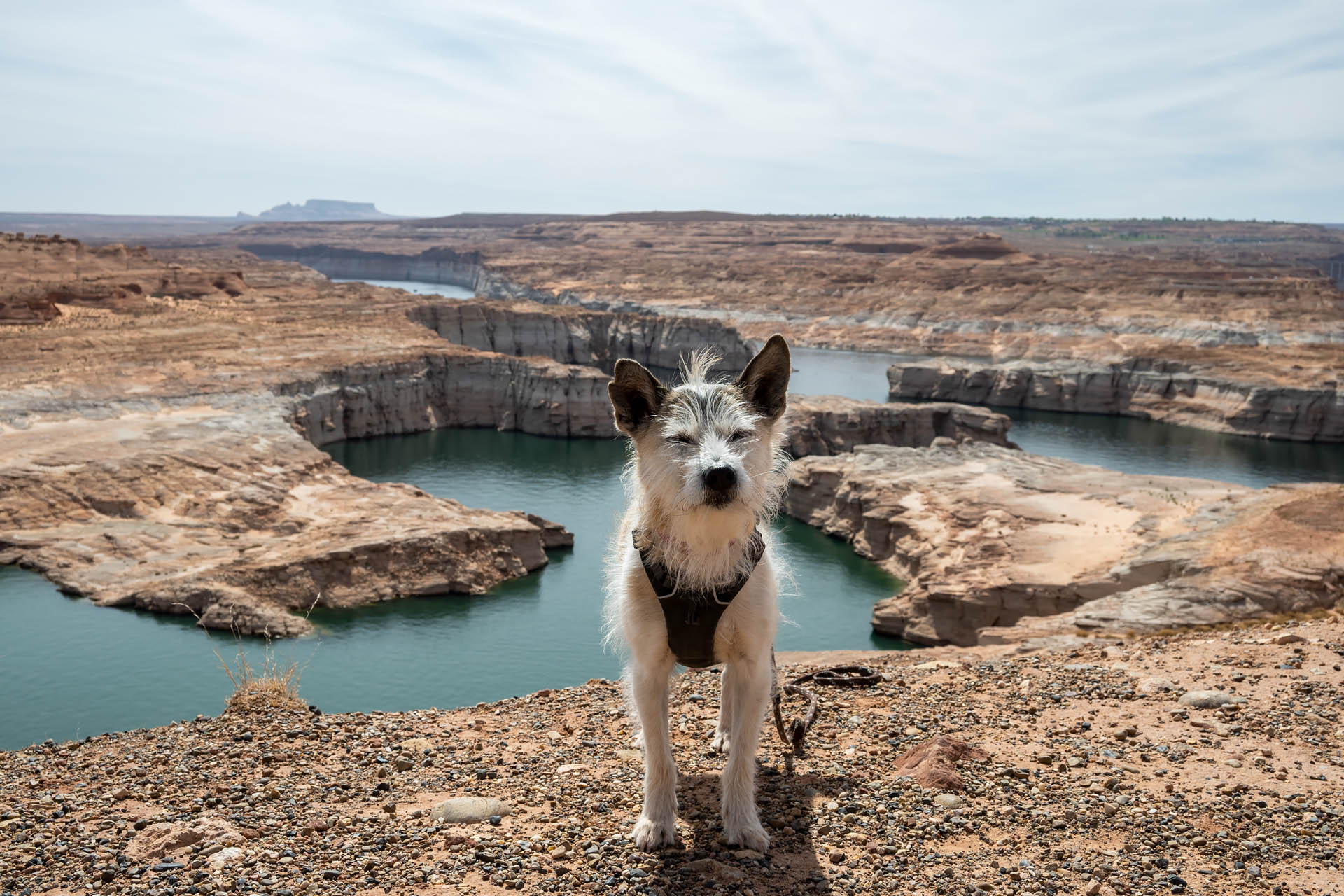