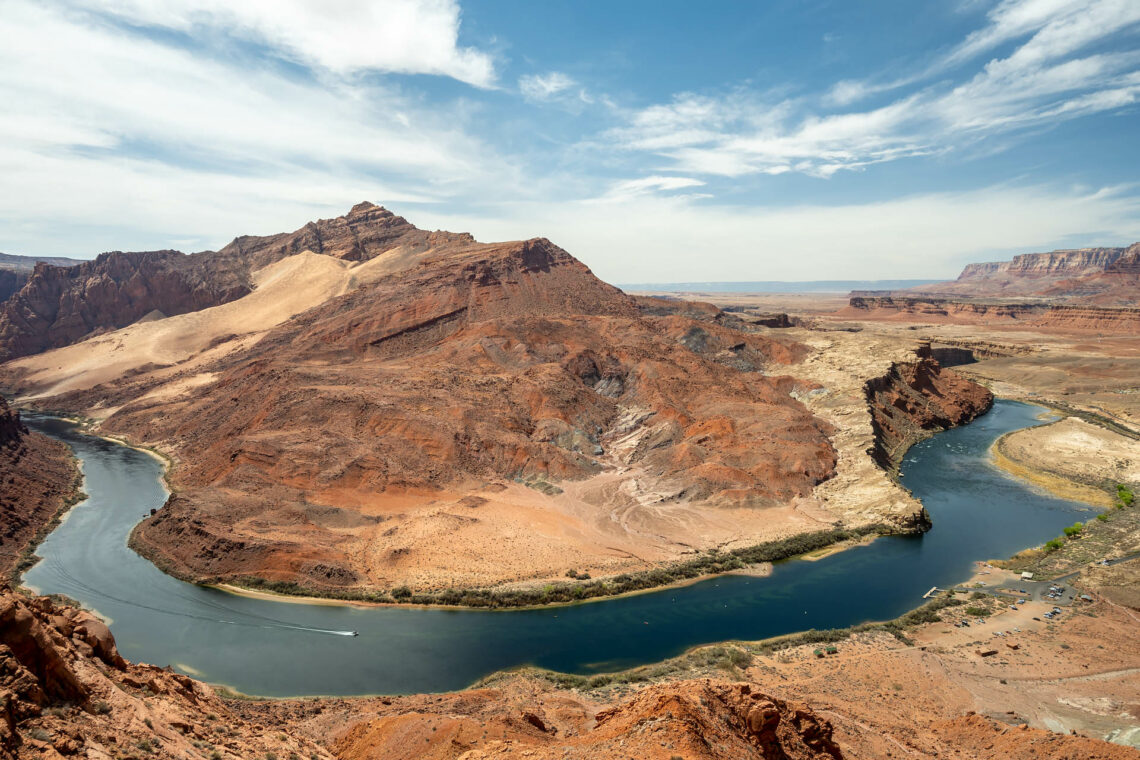 Just southwest of Page, Lees Ferry sits at the confluence of the Paria and Colorado Rivers. It’s a site of both natural beauty and historical significance. In the late 19th century, it became the site of exiled Mormon leader John D. Lee’s historic homestead and, importantly, the point of the first Colorado River crossing.

After his controversial excommunication from the Mormon Church in 1870 for his role in the Mountain Meadows Massacre, prominent parishioner John D. Lee was forced to settle with his wives in northern Arizona near the convergence of the Paria and Colorado Rivers. Following his exile, he was ordered by church leaders to create a ferry crossing. Just three years later, the first boat launched at eponymous Lees Ferry – a feat that revolutionized transport between settlements in Utah and Arizona.

Prior to the ferry’s conception, colonists had to travel upwards of 800 miles by wagon to reach the other side of the Colorado River. The new transit eased this journey and, as anticipated by church leaders, proved key to Mormon expansion. With the influx of settlers came land disputes with the native Navajo tribespeople. Consequently, a fort and supporting facilities were eventually added to the site of Lee’s homestead.

The Mormon Church ultimately maintained control of the ferry into the early 20th century, until automobiles and construction of the nearby Navajo Bridge (1929) replaced the outmoded crossing. Today, Lees Ferry provides the only vehicular access point to the Colorado River in over 700 miles of canyon country, and is one of the main put-in sites for rafting trips.

If you’re interested in hiking, the Spencer Trail begins at the site of Lee’s historic homestead beneath the Vermilion Cliffs. The trail follows an old mule path that was built in 1910 to haul mining supplies to Warm Creek Canyon, some thirty miles away. The trail is surprisingly narrow and steep, especially considering its original use. 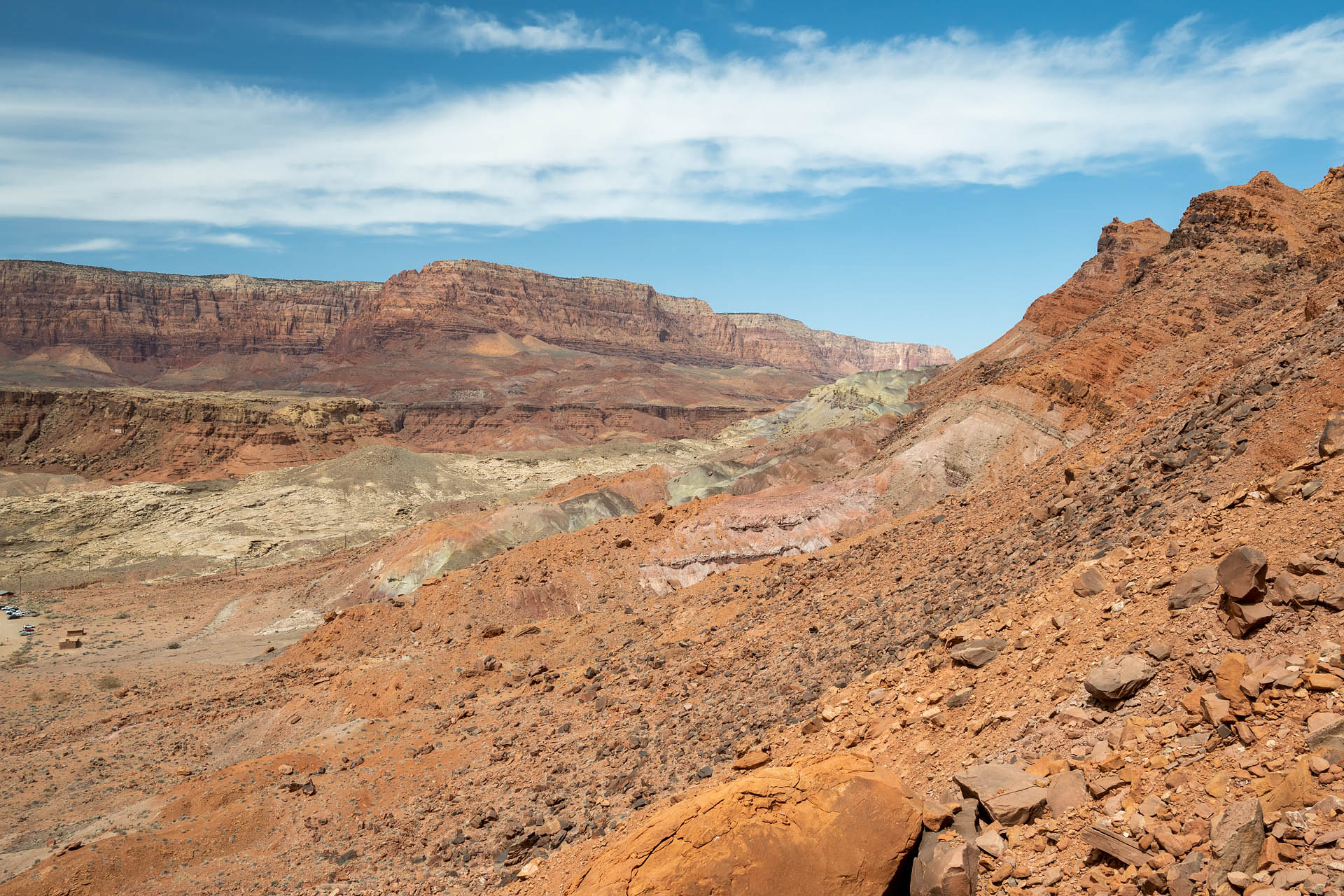 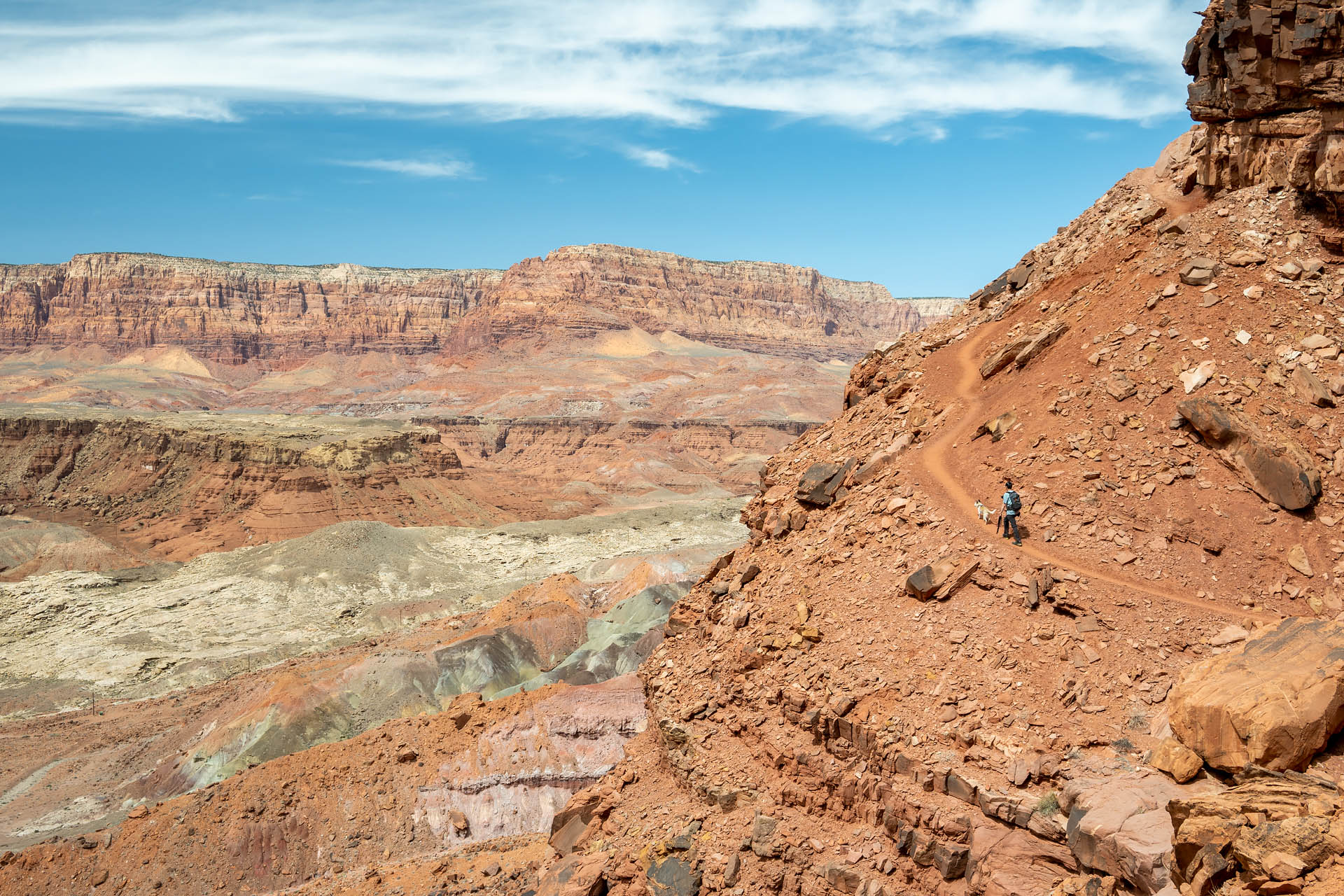 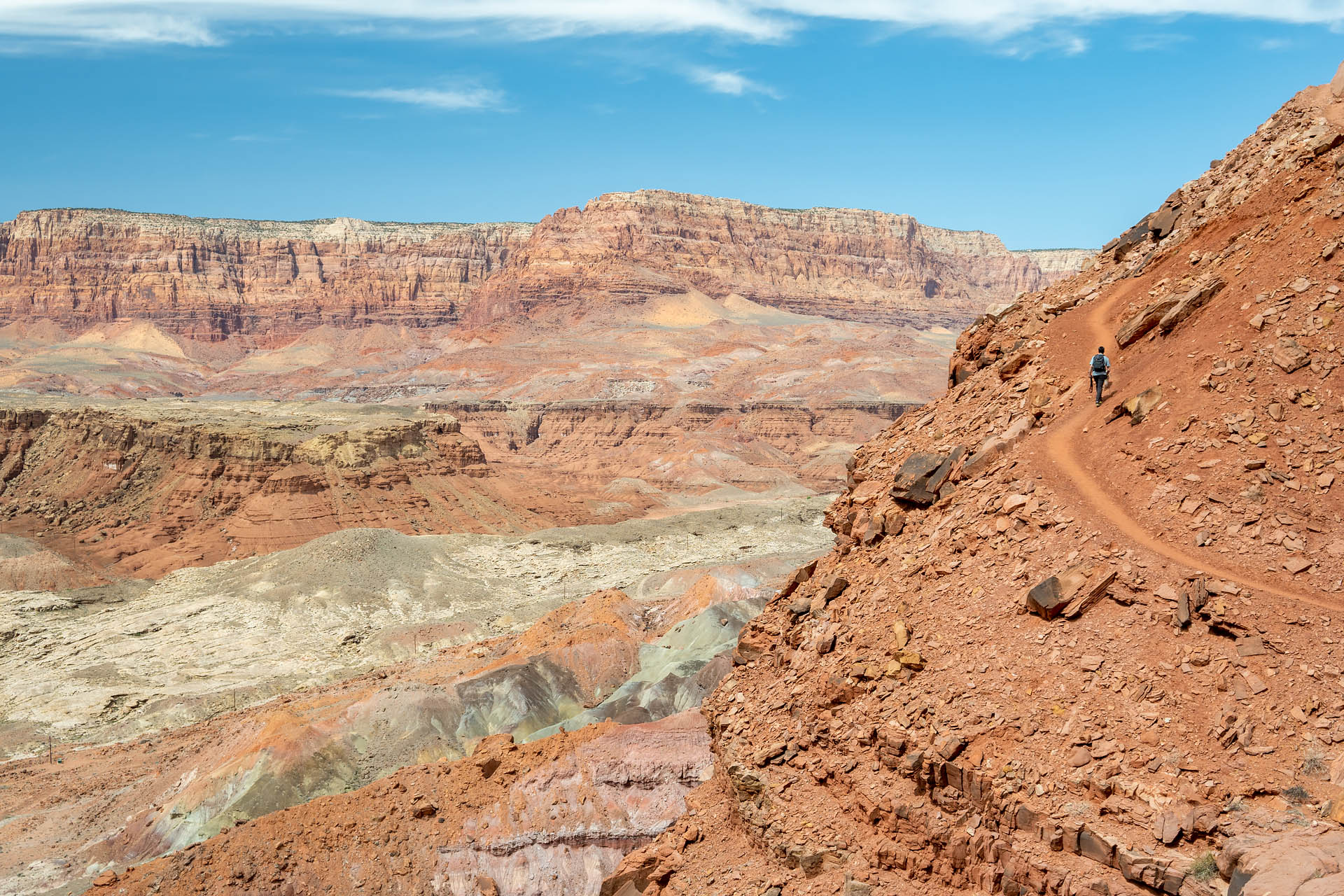 Switchbacking up an exposed hillside of slickrock and sand to a plateau atop the Echo Cliffs, the views from the trail are just gorgeous. Looking southwest, you get an awesome look at the Vermilion Cliffs rising beyond the Colorado River as it cuts through Marble Canyon. I never expected such a colorful landscape, with the red sandstone, glistening turquoise water of the Colorado, and verdant, tree-lined riverbanks creating a rainbow of hues. Surprisingly, I found myself stopping every quarter mile or so to snap what amounted to almost the same photo but from a slightly different vantage point. 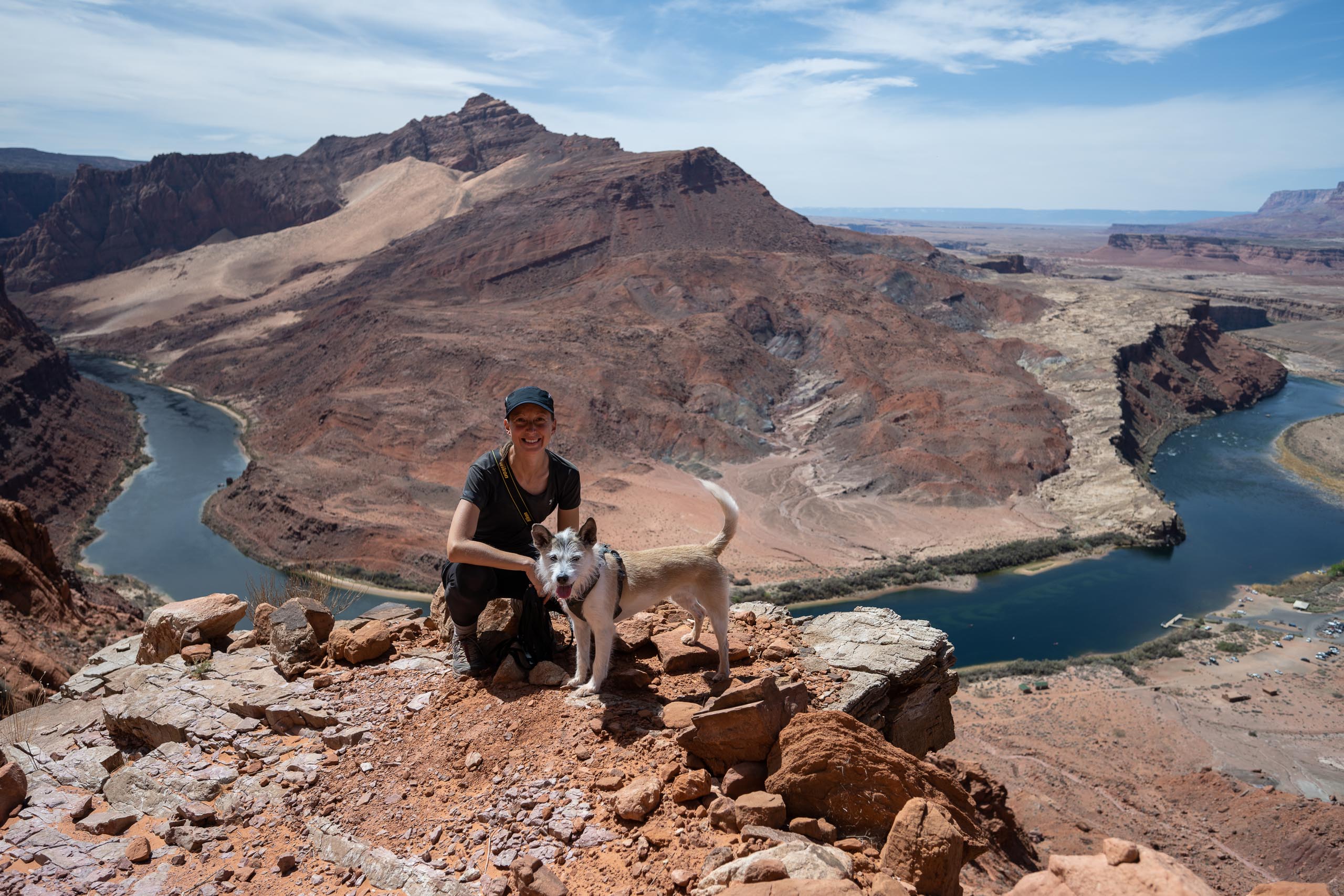 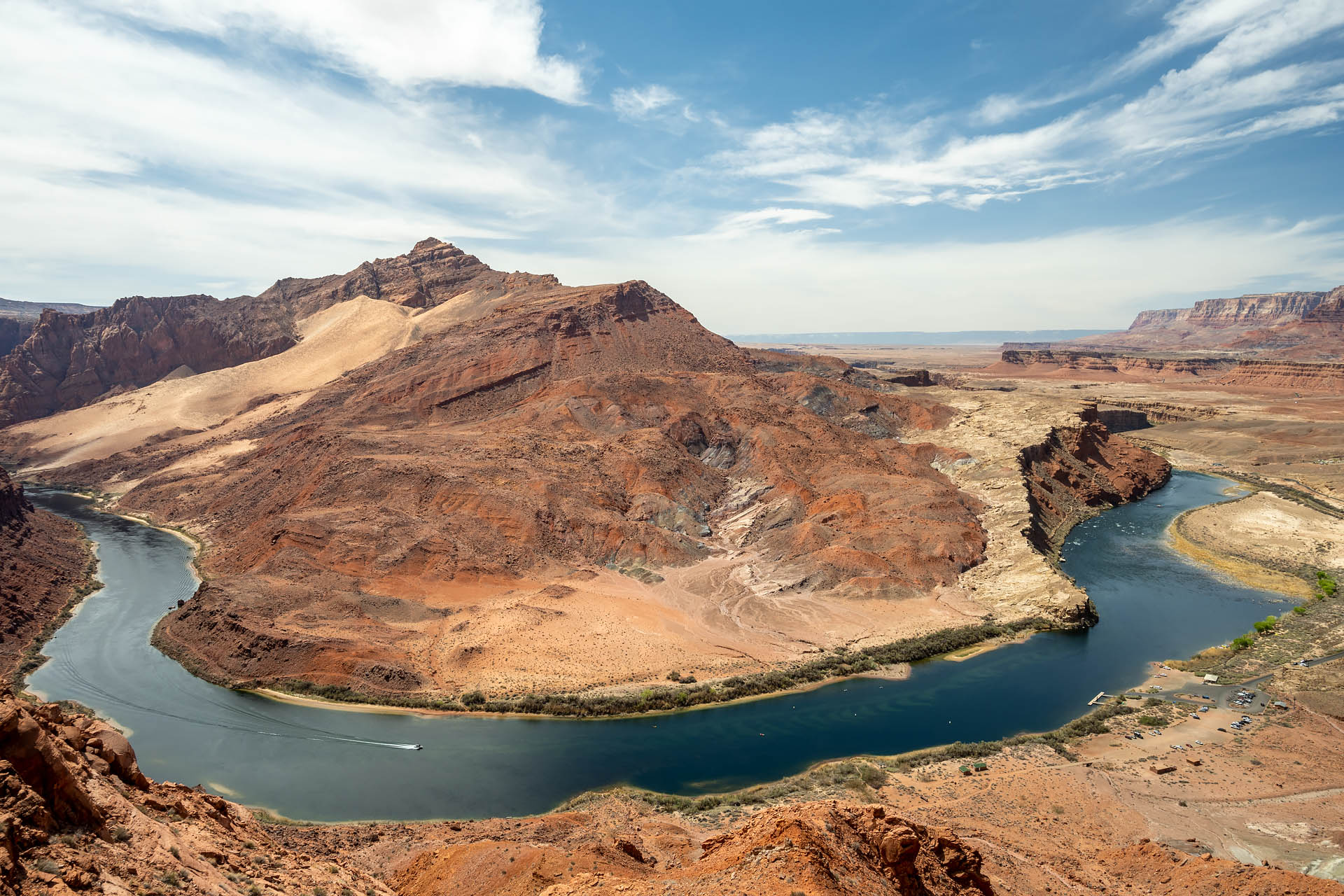 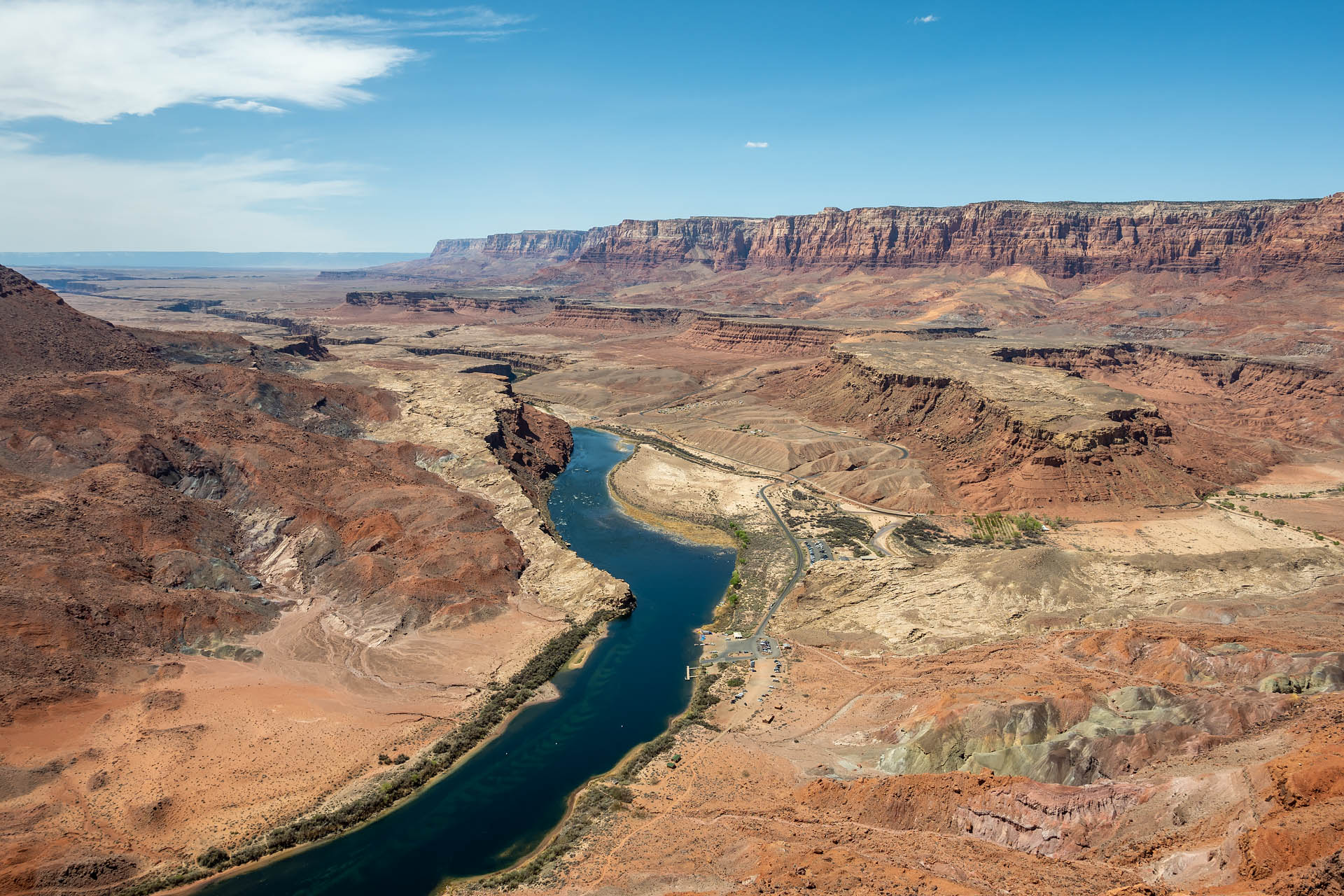 While the trail is quite gradual for the first half mile, the overall grade is pretty steep – gaining just under 2,000 vertical feet over the next two-miles to the highpoint. The first half of the trail is nicely-graded packed dirt. As the trail approaches the top of the ridge, it turns to more uneven terrain – a combination of sand and slickrock. It’s by no means treacherous, but you do have to be a bit more deliberate with your footing.

After climbing the cliffside, the trail terminates at the top of the ridge. In addition to the view of Marble Canyon and the Vermilion Cliffs, you can also look out onto Glen Canyon and the town of Page; and you can even make out the silhouette of Tower Butte in the distance.

If you’re interested in going off-trail for a half mile or so, it’s possible to get to Six Mile Bend from the top of the ridge. The gooseneck in the Colorado River is similar to that found at Horseshoe Bend, but much more remote and peaceful. While it may lack Horseshoe Bend’s iconic shape, it’s still a really gorgeous spot. Better yet? There is no one out here, so you’ll likely have it all to yourself. It’s certainly a lot more work than pulling off into a paved parking lot, but so worth it for those looking a little more adventure and serenity. 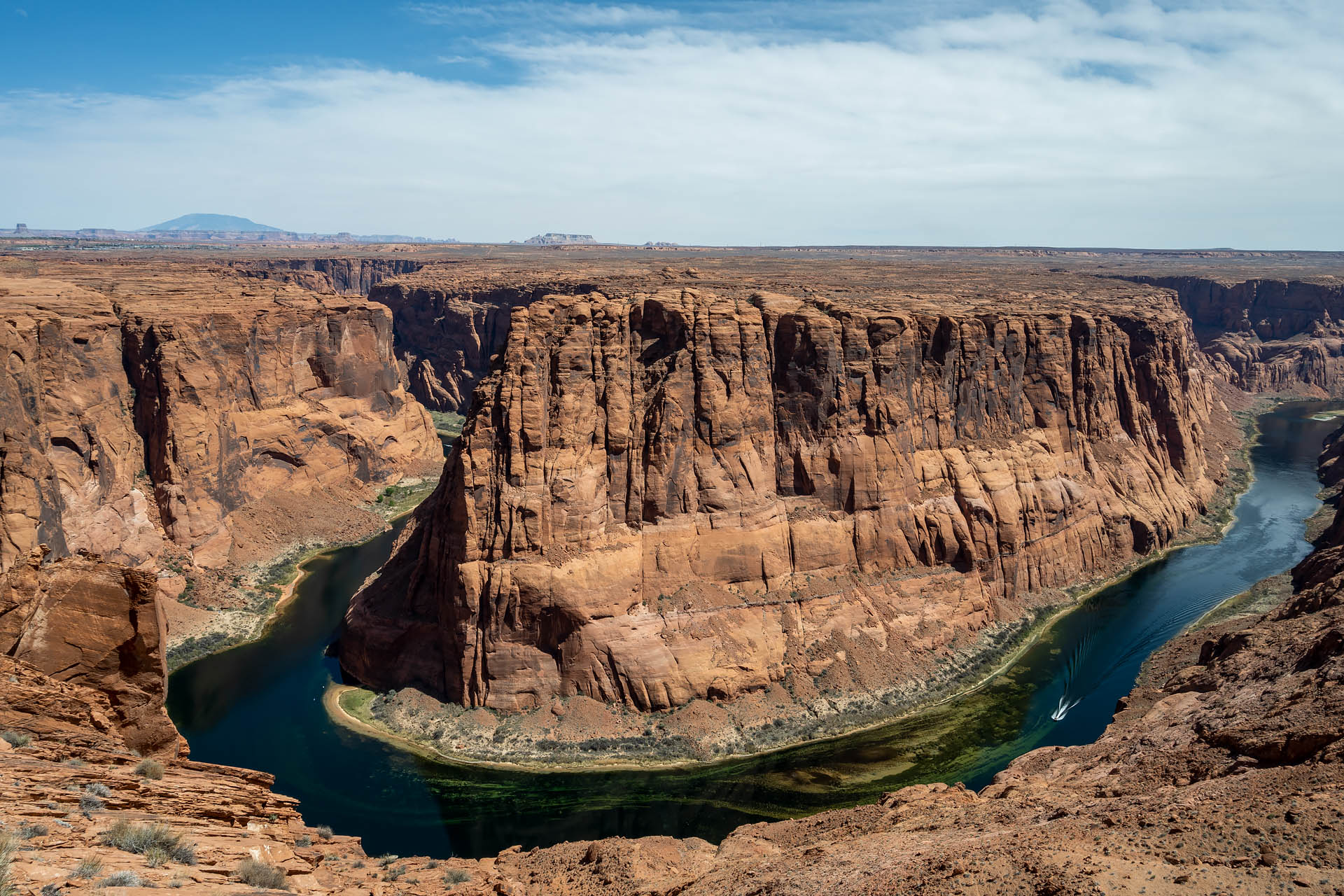 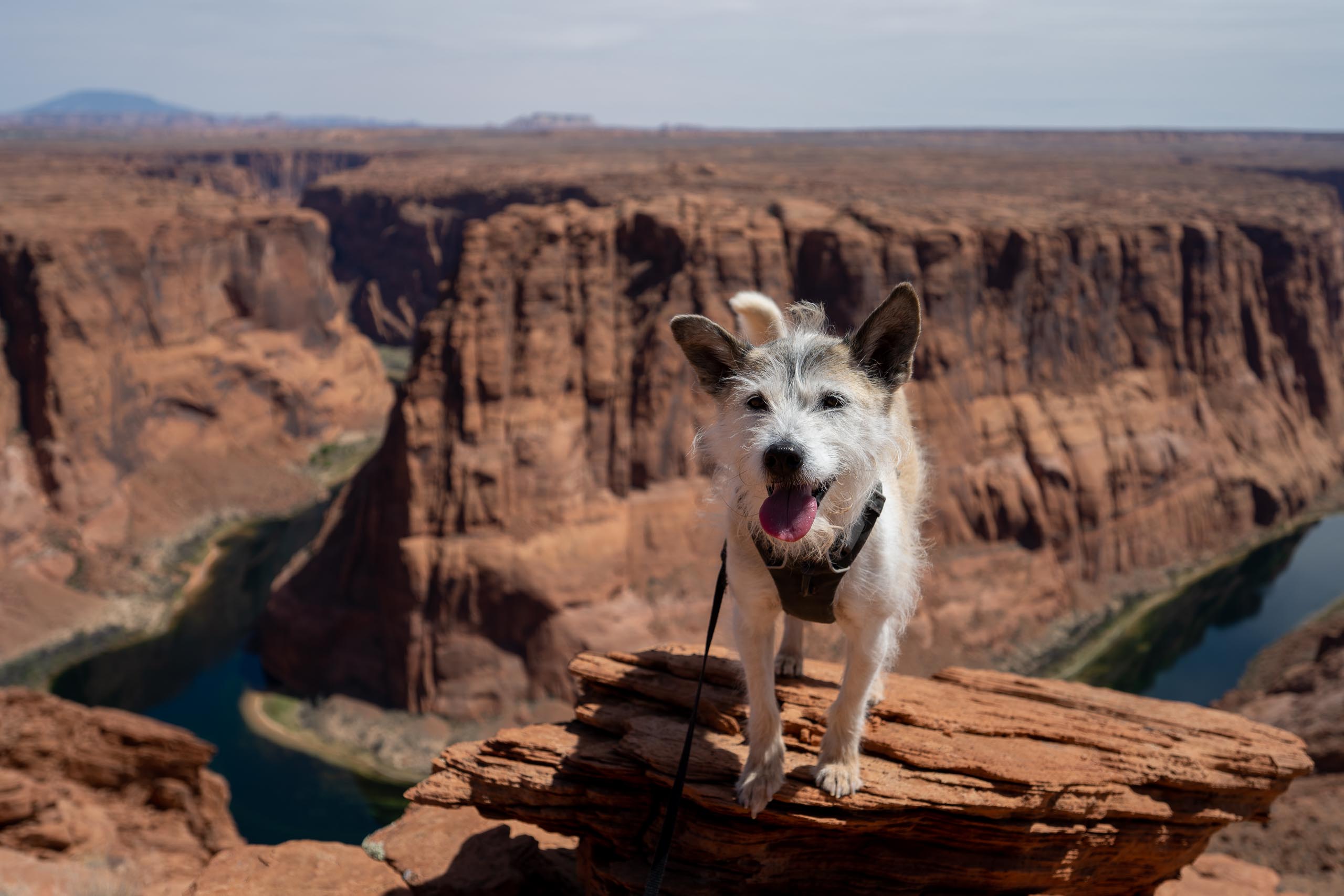 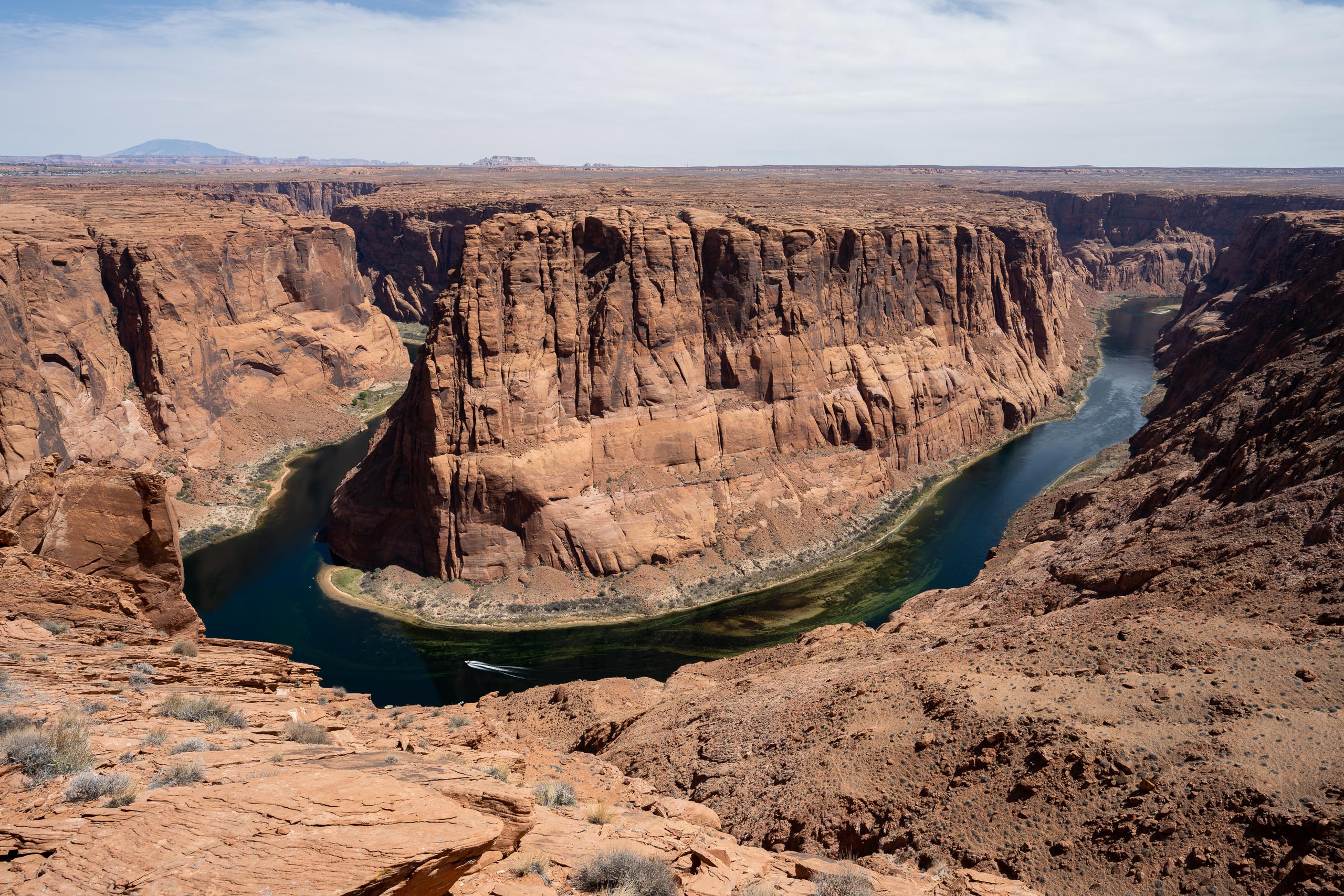 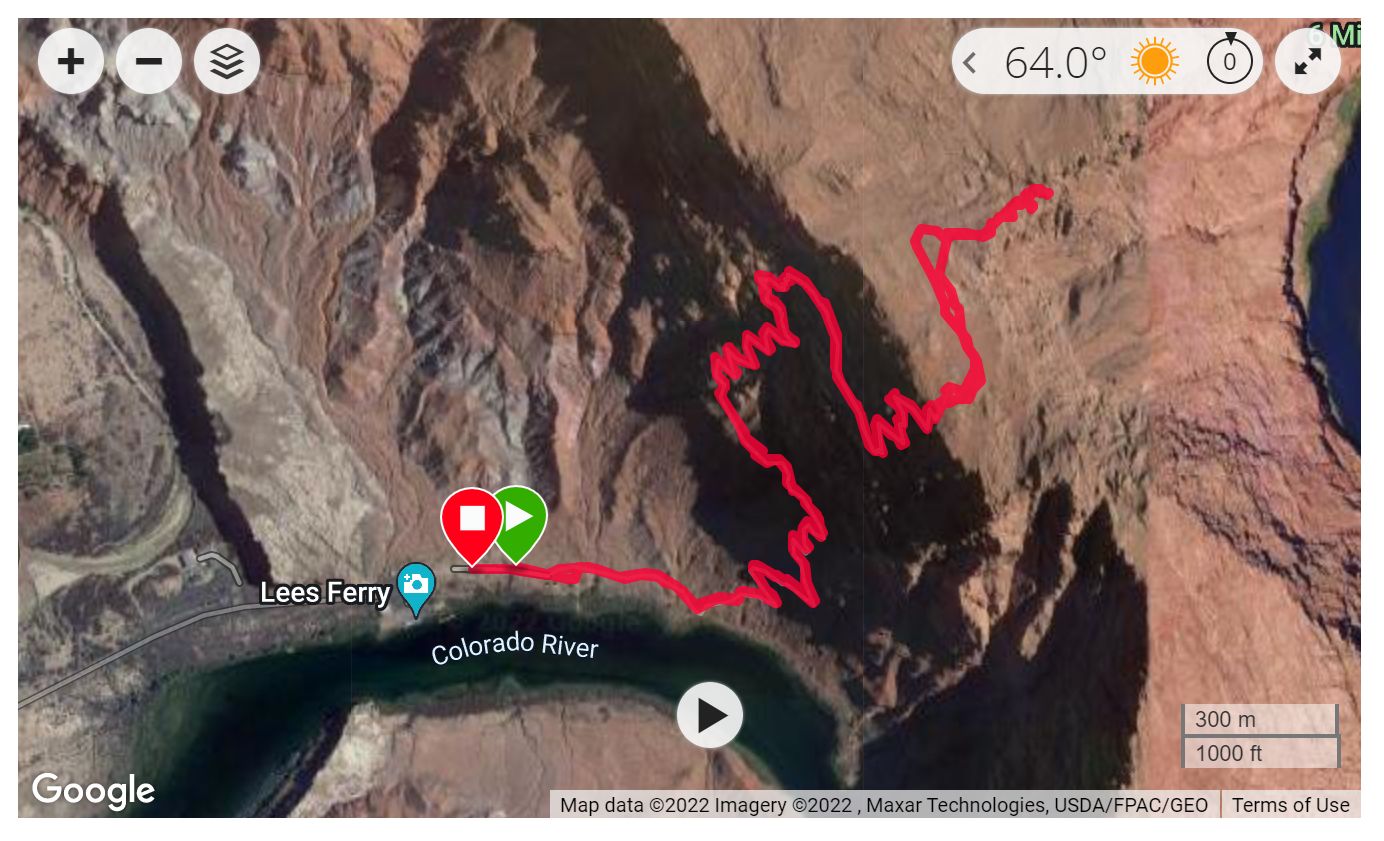 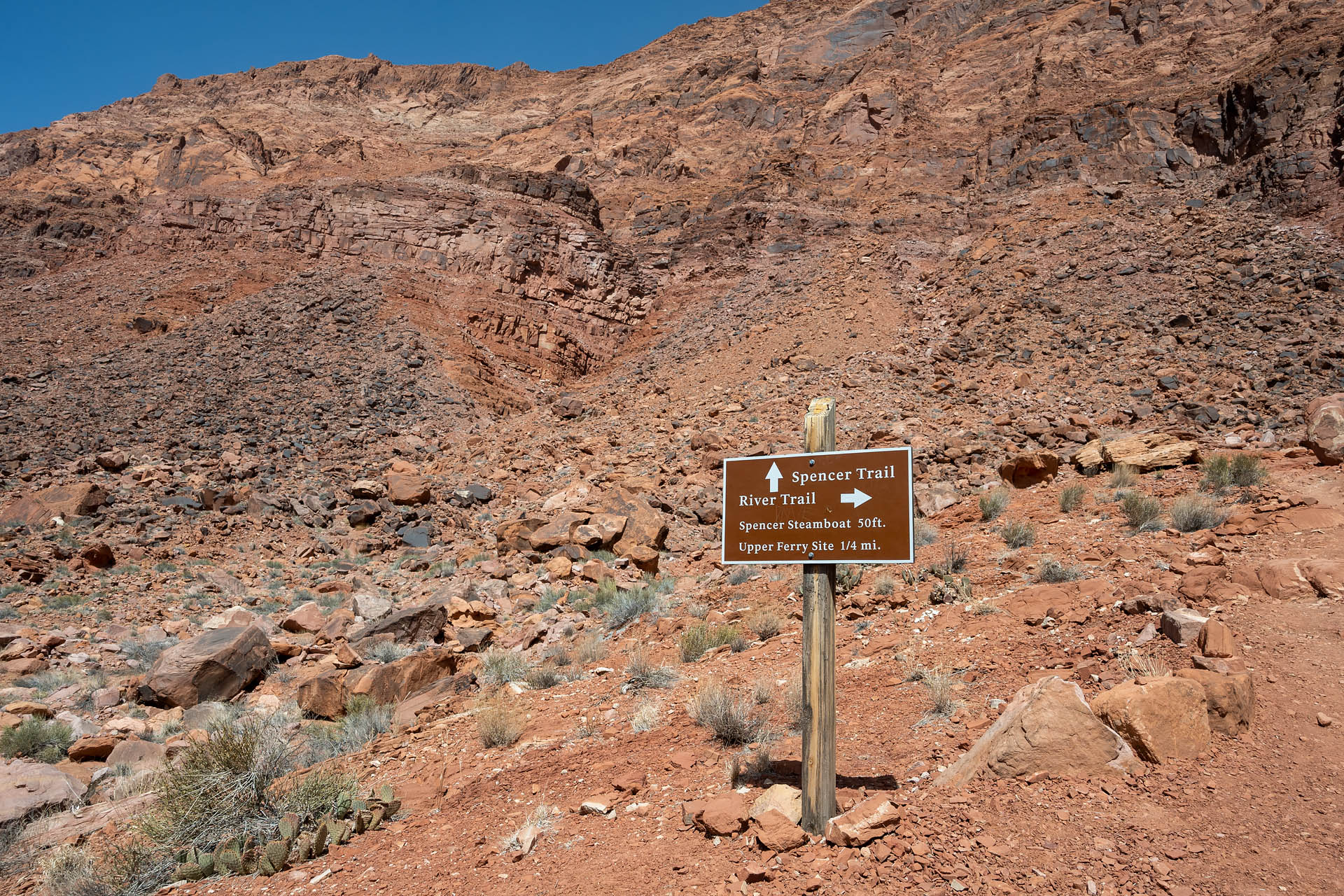