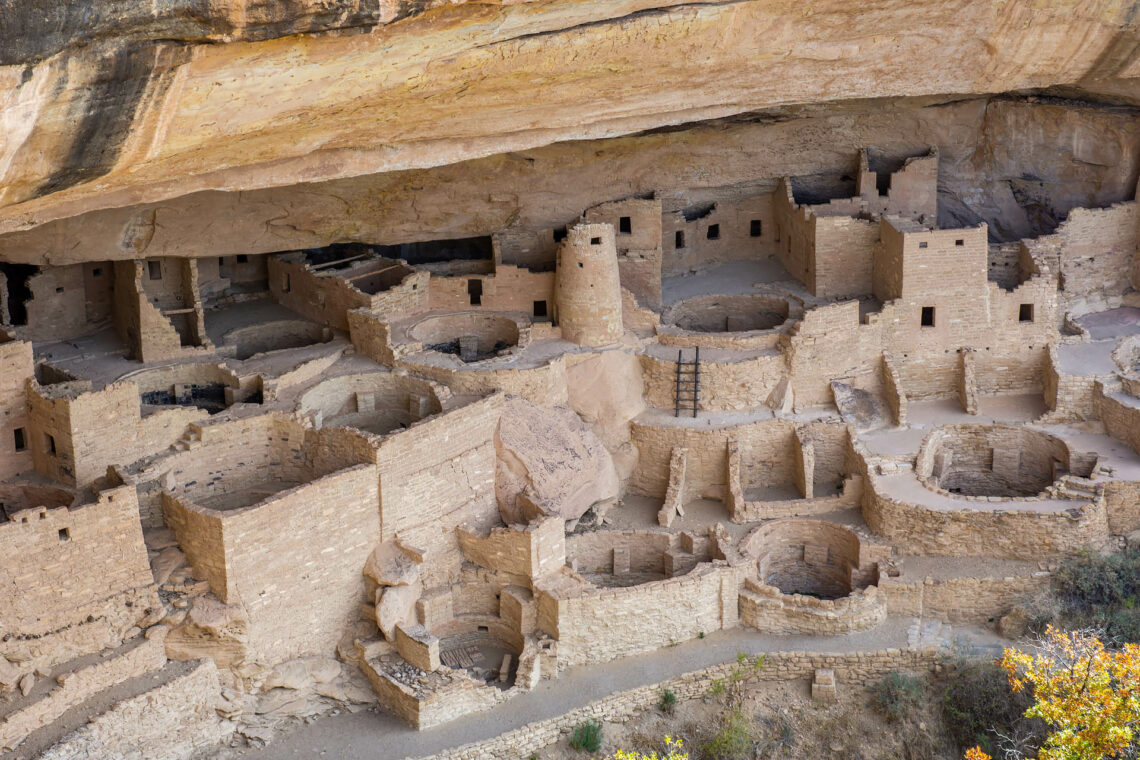 Established as a national park in 1906, Mesa Verde preserves the historical heritage of the Ancestral Puebloan tribes. The park protects thousands of archaeological sites and some 600 cliff dwellings in southwestern Colorado, offering visitors a glimpse into the lives of the Native American people who occupied the region for more than 700 years.

The Ancestral Puebloan culture first emerged in Mesa Verde around 550–600 CE, having advanced from the hunter-gatherer existence that defined the Basketmaker Era. From this semi-nomadic lifestyle, the lives of the Ancestral Pueblo people swiftly transitioned from hunting and foraging to subsistence farming. While the Pueblo still regularly hunted deer, rabbits, and bighorn sheep, they adopted a more agrarian lifestyle and began growing corn, beans, and squash. As they increased their ability to store food, the Ancestral Pueblo took up permanent, year-long residences in the area.

The first Puebloan settlements were pit houses, built around 600 CE. These were then replaced by single-story and multi-story villages between 750 and 1100 CE. After six centuries of occupying the mesa top, the Ancestral Pueblo ultimately moved to cliff dwellings, tucked in recessed overhangs within the canyon, around 1200 CE. The single- and multi-room homes/villages were constructed from sandstone, adobe mortar, and wooden beams and were built into natural alcoves within the canyon walls – some of them hundreds of feet above the canyon floor. The dwellings were accessed via ladders, and many of the larger sites included kivas – sacred, circular, underground rooms that were used for ceremonies and celebrations.

After living in the cliff dwellings for only a century, the Ancestral Pueblo abruptly abandoned their communities. Pueblo migration away from Mesa Verde began in the late 1270s, coincident with the start of a 23-year drought. By 1300 CE, the sites had all been deserted. The devastating drought, resource depletion (overhunting, deforestation), and social conflict are all possible explanations for the civilization’s sudden exodus. It wasn’t until the 1880s, nearly six centuries later, that cowboys and prospectors discovered the remnants of the ancient cliff dwellings. Regrettably, the ruins were largely pillaged of artifacts until the mesa was formally protected as a national park in 1906.

Today, a series of loop roads connects dozens of ruins with short hiking trails1 and even a small museum.2 Additionally, a number of the cliff dwellings (including Cliff Palace, Balcony House, and Long House) can be visited via one- to two-hour ranger-led tours for about $7/person.3 While tours were unavailable when we visited (due to both seasonal and COVID-related closures), we still had a great time viewing the ruins from the various overlooks throughout the park.4

The park is fairly small in size, so one or two days should allow you to see many of the archaeological sites, depending on your interest level. We spent one full day in late October, and left feeling satisfied with our time there. In our single-day, self-guided tour of Chapin Mesa, we were able to drive both Mesa Top Ruins Road and Mesa Top Loop and view more than a dozen sets of ruins. We also fit in walks along a couple of short trails – Petroglyph Point and Soda Canyon. Below, we’ve highlighted some of the attractions we enjoyed during our visit to Mesa Verde.

Nearly 600 cliff dwellings can be found within the protected bounds of Mesa Verde National Park, dating to the late 12th and 13th centuries. Roughly 75% of the dwellings are small –  containing one to five rooms – and many were used as store houses. Some residences, however, comprised much larger villages and ceremonial sites. In the multi-chamber complexes, families typically lived together, with two or three people sharing a room that was roughly six by eight feet.

Mesa Verde’s largest and most well-preserved sites include Cliff Palace, Balcony House, Spruce Tree House, Long House, and Step House. The majority of the ruins can be found in Chapin Mesa; however, Step House and Long House are located in Wetherill Mesa. Wetherill Mesa Road is open seasonally and has vehicle size restrictions, so plan accordingly if these two sites are on your must-see list.5,6

The largest cliff dwelling in North America, the ruins of Cliff Palace are staggeringly impressive. With 150 rooms, Cliff Palace is thought to have been used as a social and administrative site with a population of around 100 individuals at its height in the 13th century. What is more, its 23 kivas suggest that Cliff Palace was a site with great ceremonial significance. 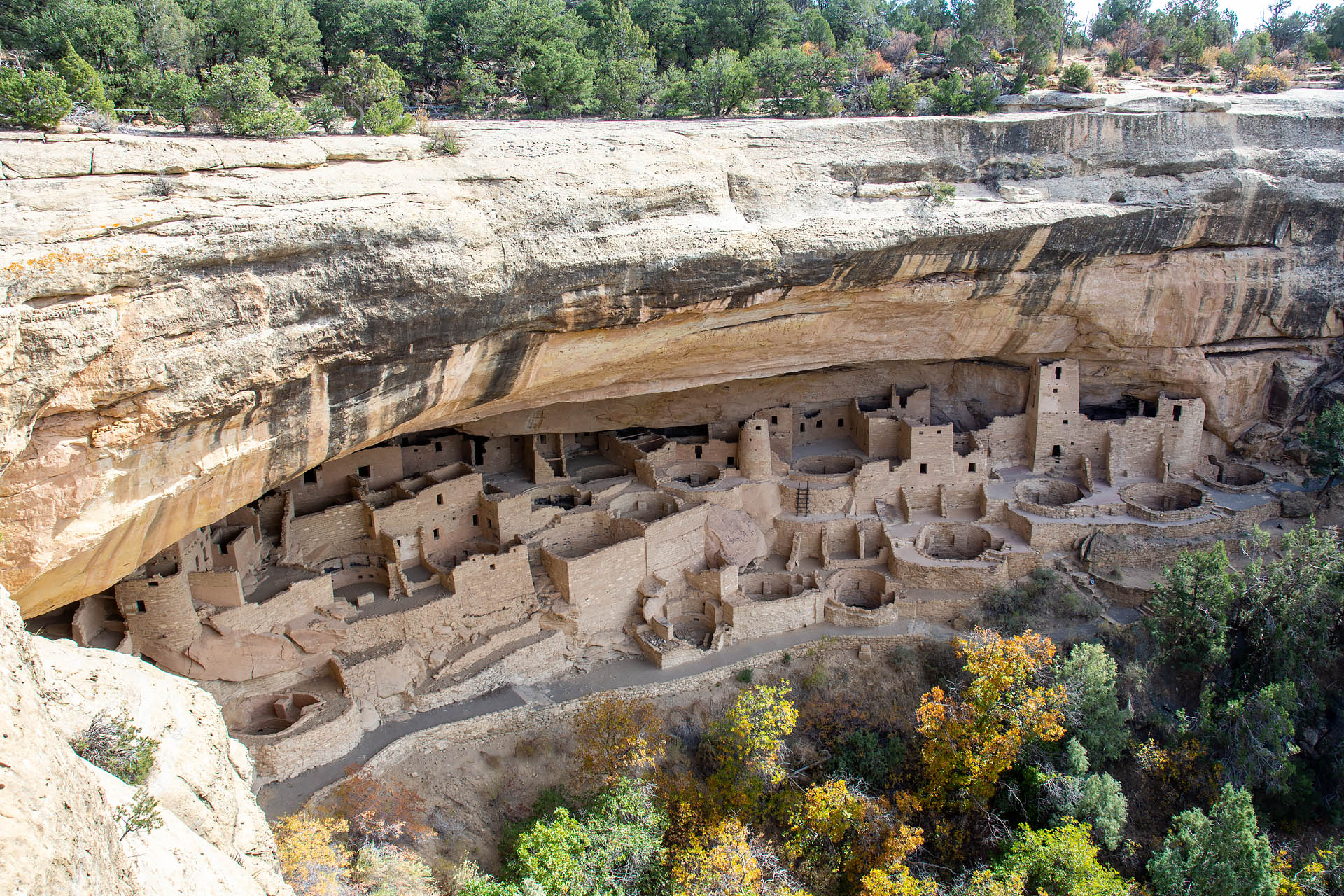 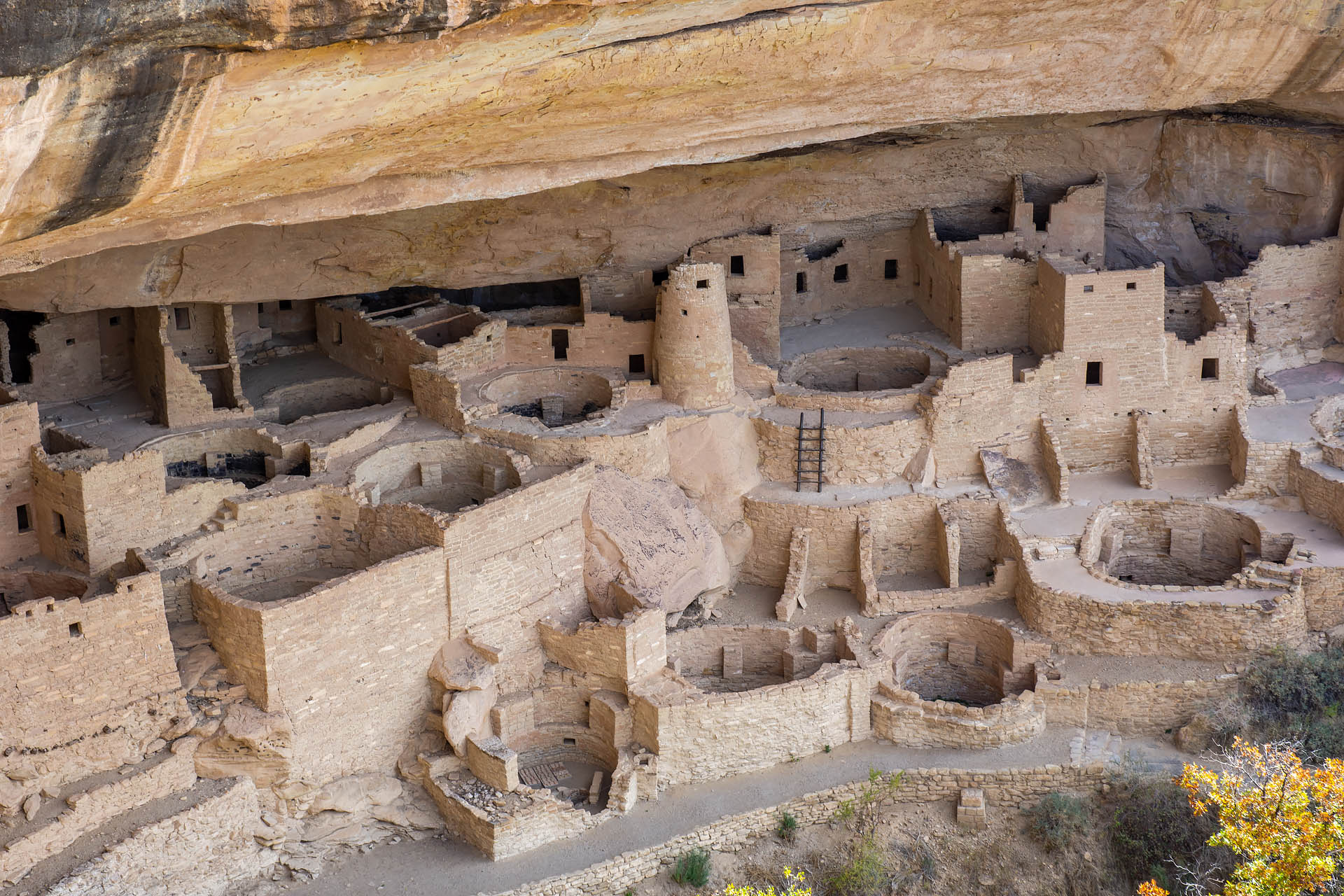 With some 40 rooms and two kivas, Balcony House was considered a mid-sized village. While the dwelling was northeast facing and, consequently, quite cold during the winter months, there were two natural seep springs nearby that were likely quite valuable to Balcony House’s residents. Home to about 30 people in the 13th century, the dwelling’s entrance can only be accessed via a series of steps and 32-foot ladder. 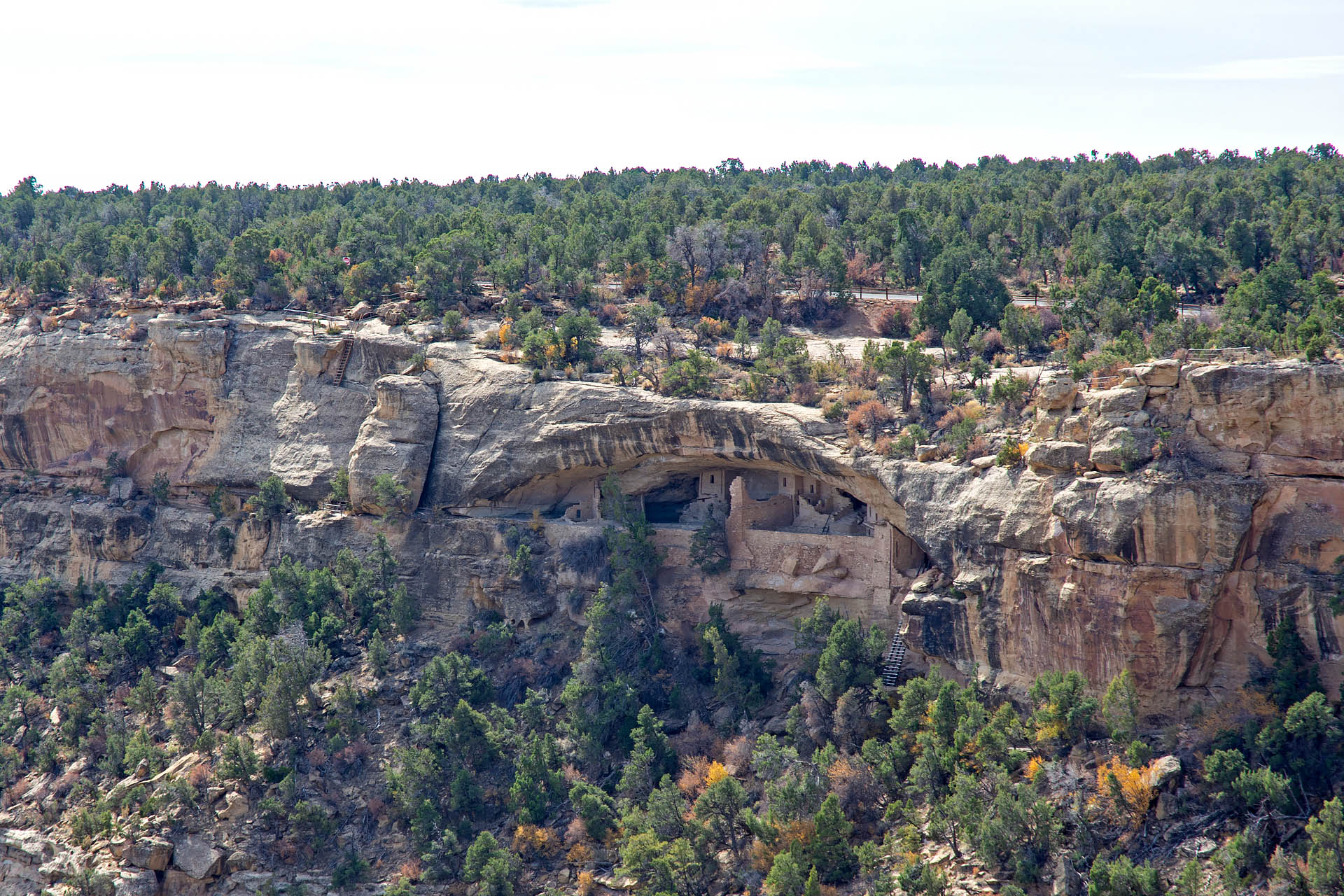 Spruce Tree House is the best-preserved cliff dwelling within Mesa Verde NP, and is the third largest behind Cliff Palace and Long House. Built into a 216-foot-wide natural alcove between 1211 and 1278 CE, the dwelling had some 114 rooms and 8 kivas. It’s thought that 100 to 150 people lived here. Because the dwelling was so well protected within the large recess, 90% of the materials are original. 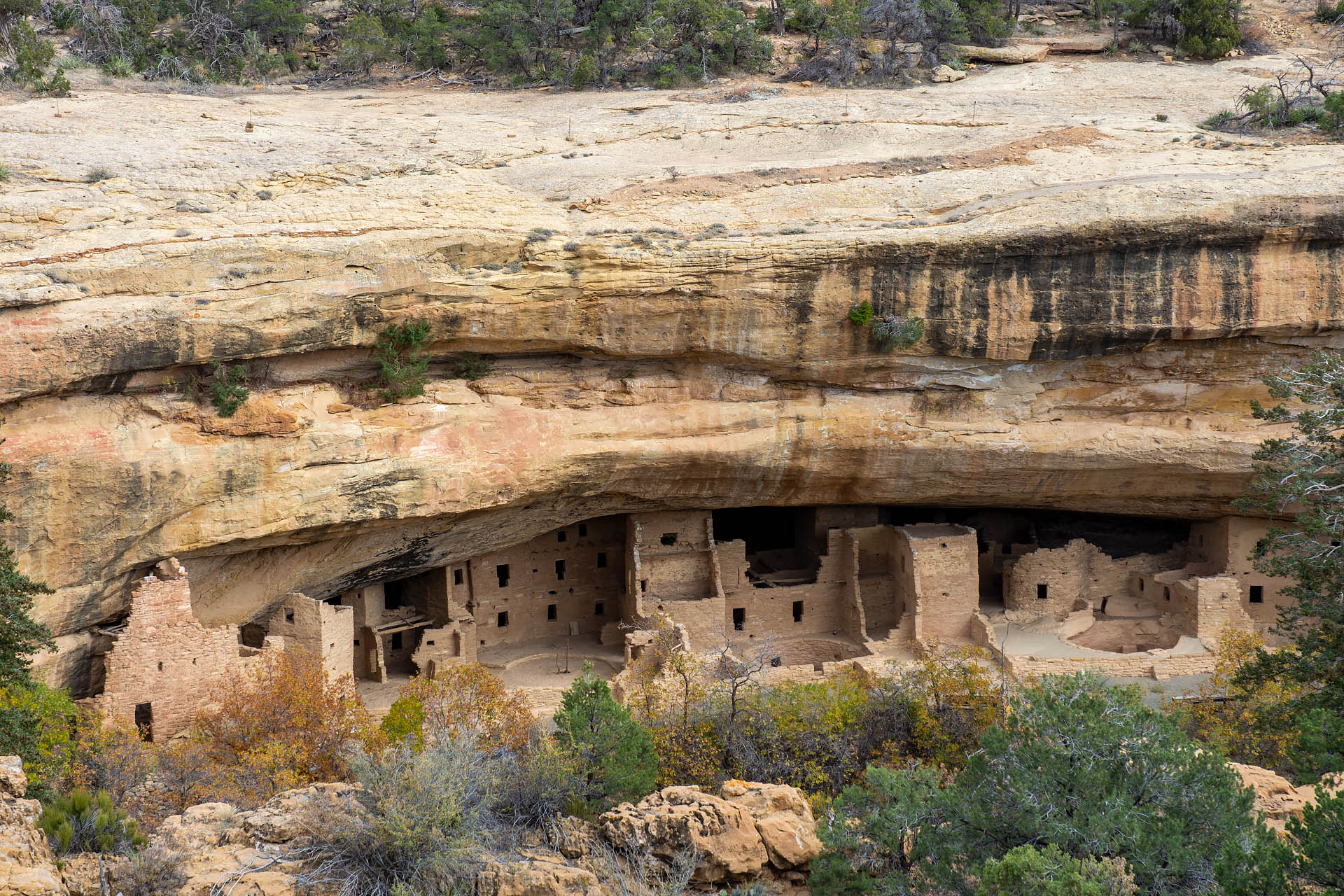 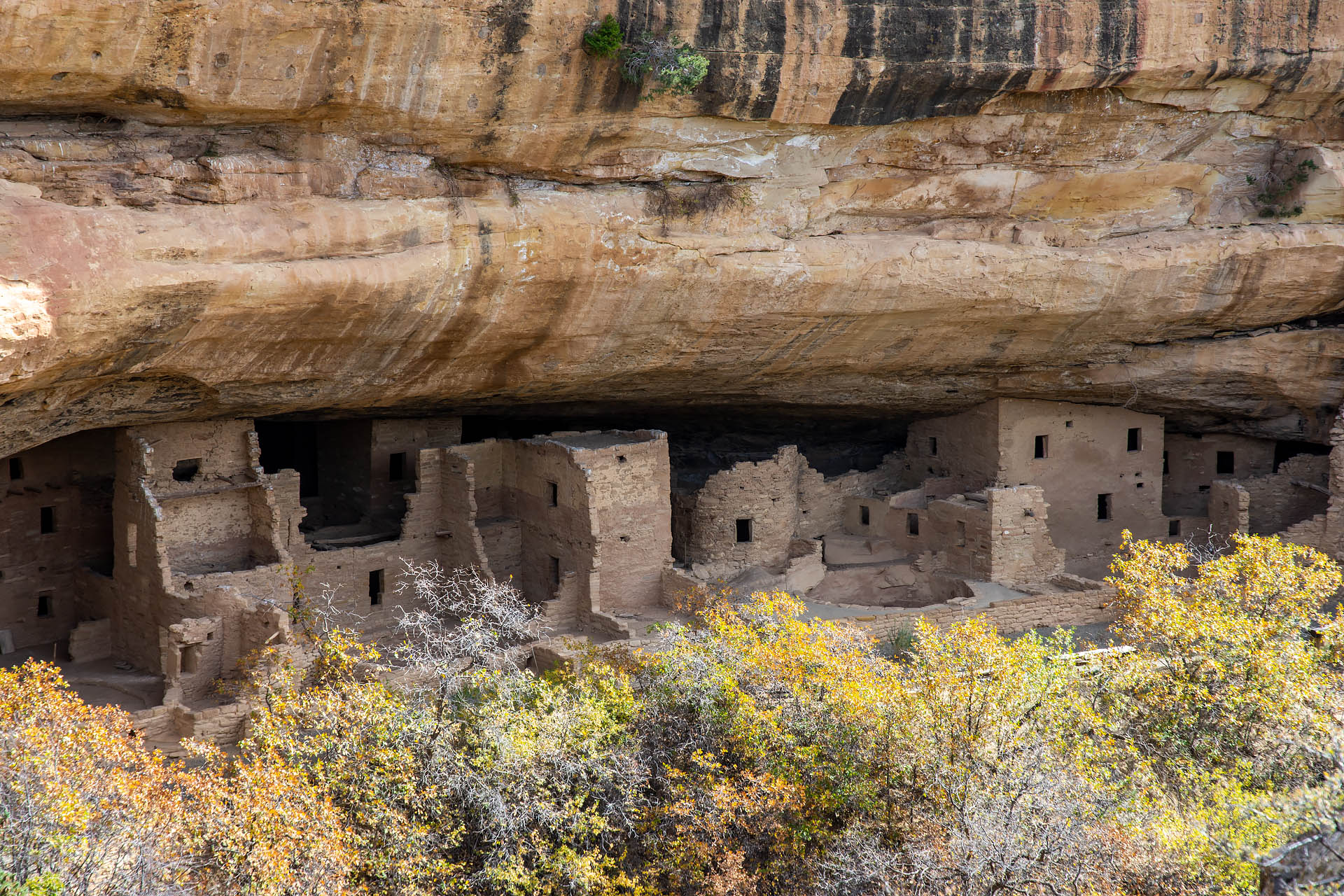 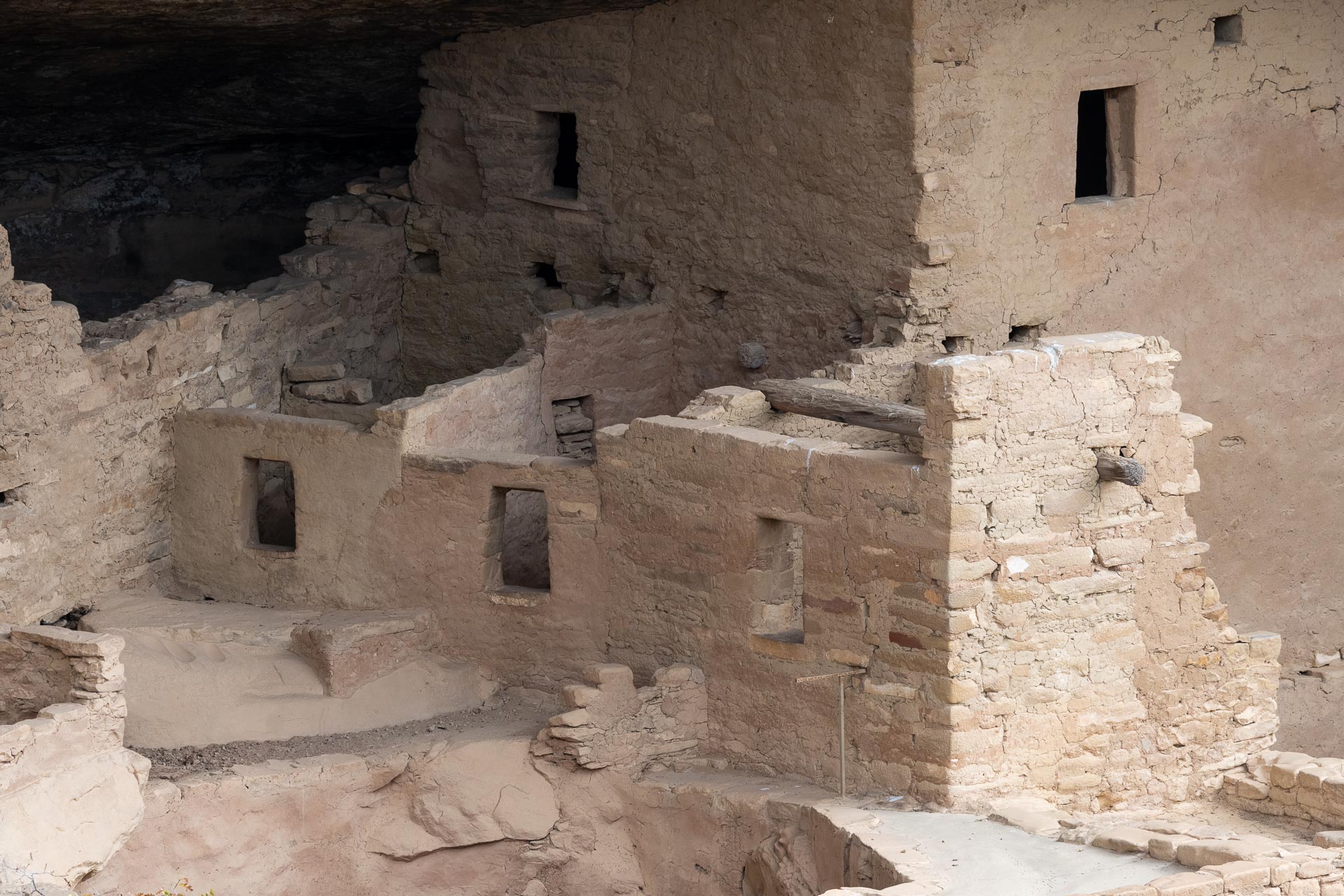 Nestled within Fewkes Canyon, this set of ruins can be viewed from Sun Point View, along the southern end of Mesa Top Road. In addition to Sunset House, the viewpoint also offers a glimpse of Oak Tree House and a distant look at Cliff Palace. 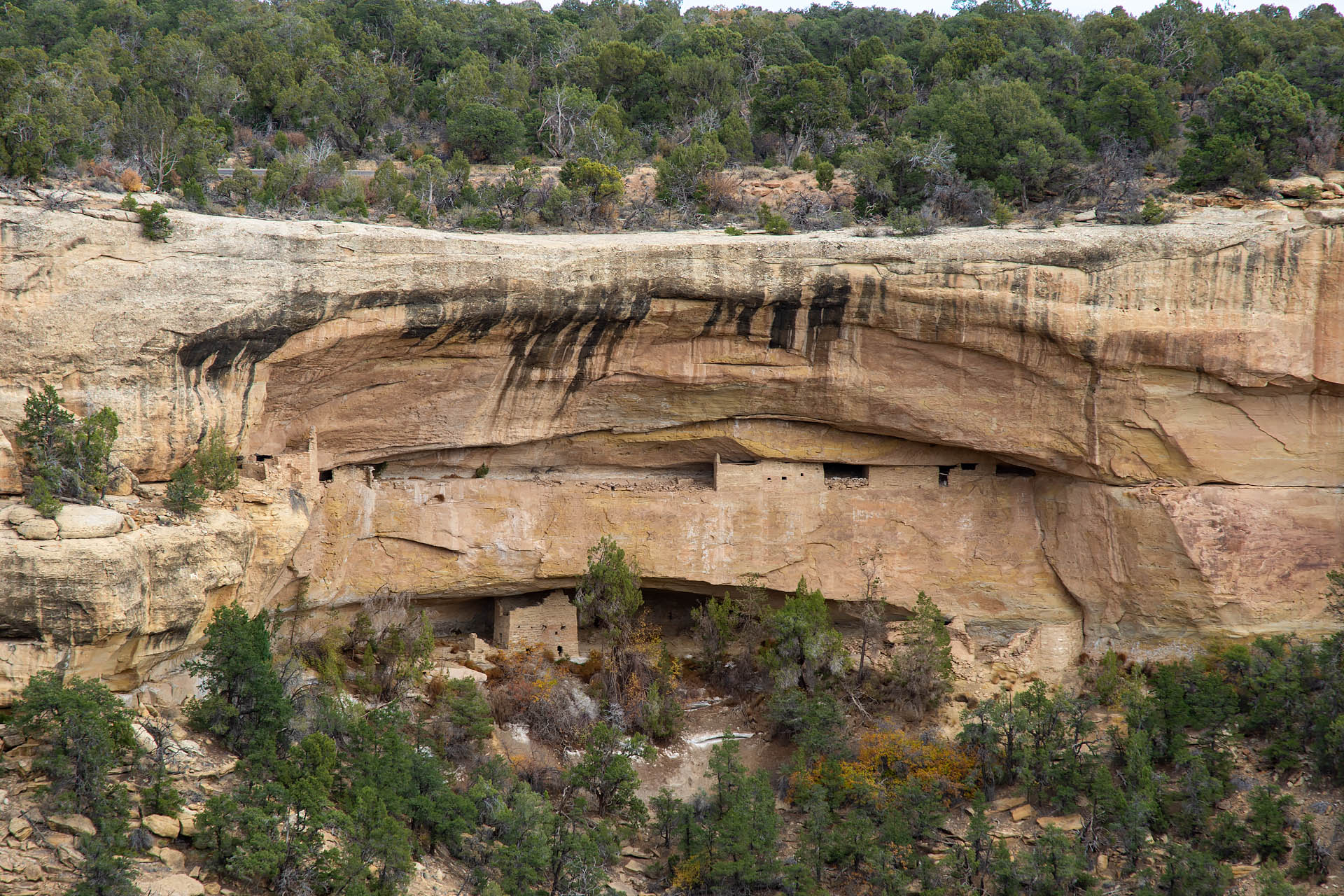 As you drive around Chapin Mesa, a number of smaller dwellings dot the canyon walls. To get a good look at the ruins, bring a good telephoto lens or pair of binoculars – many of the sites are quite distant and well camouflaged, blending in considerably with the sandstone walls of the slender canyon alcoves. Pictured below are the ruins of Oak Tree House, Fire Temple, and the House of Many Windows. 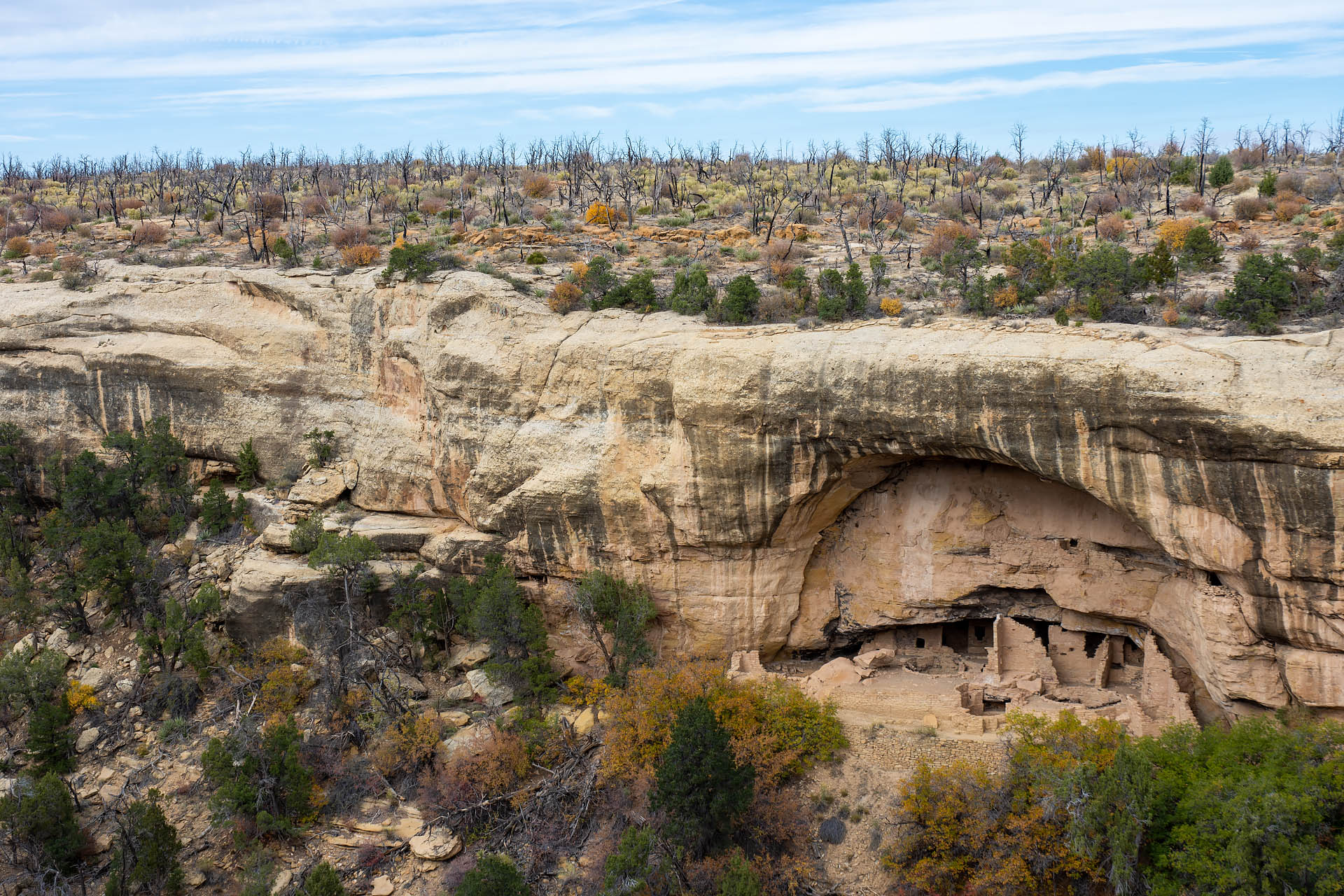 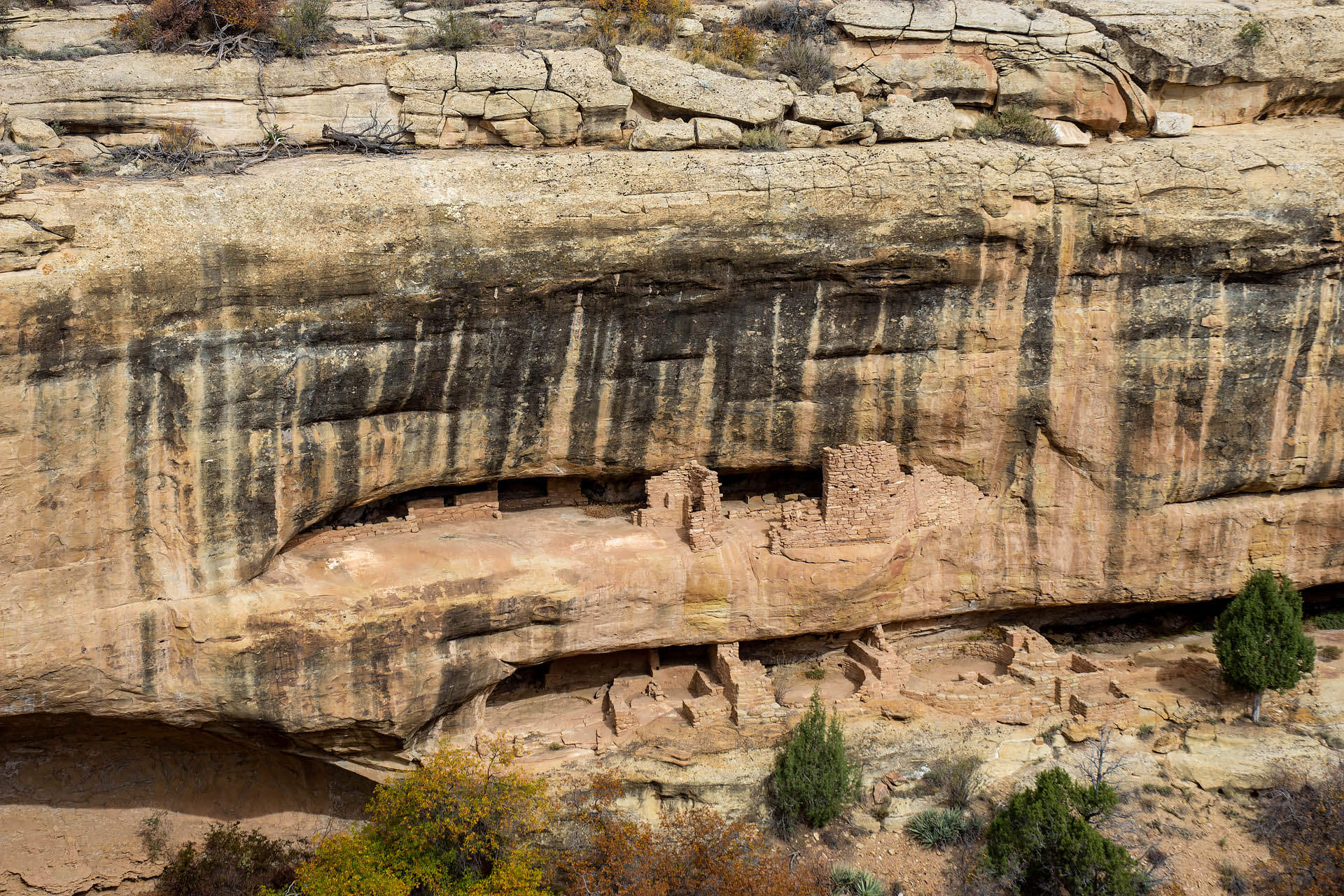 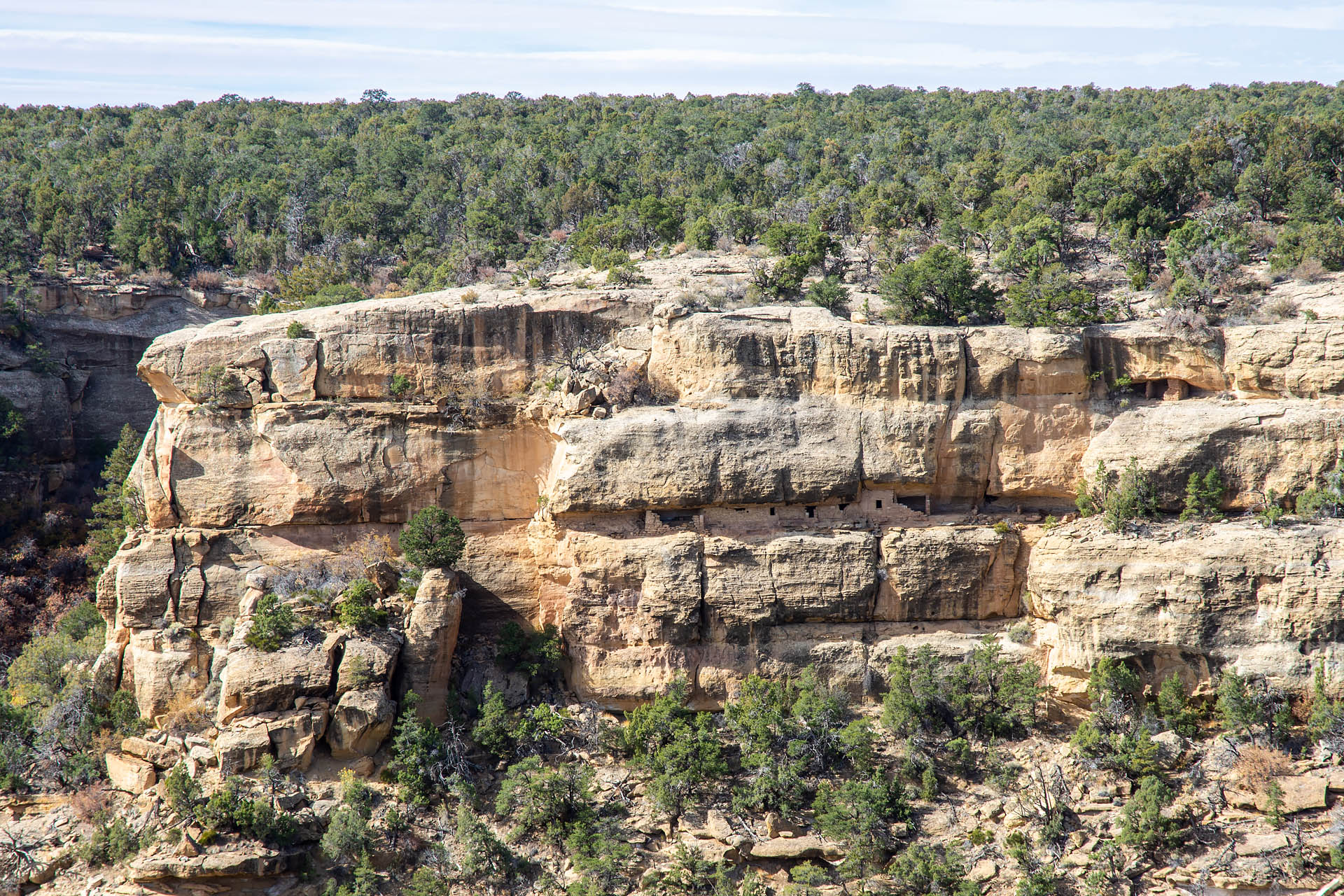 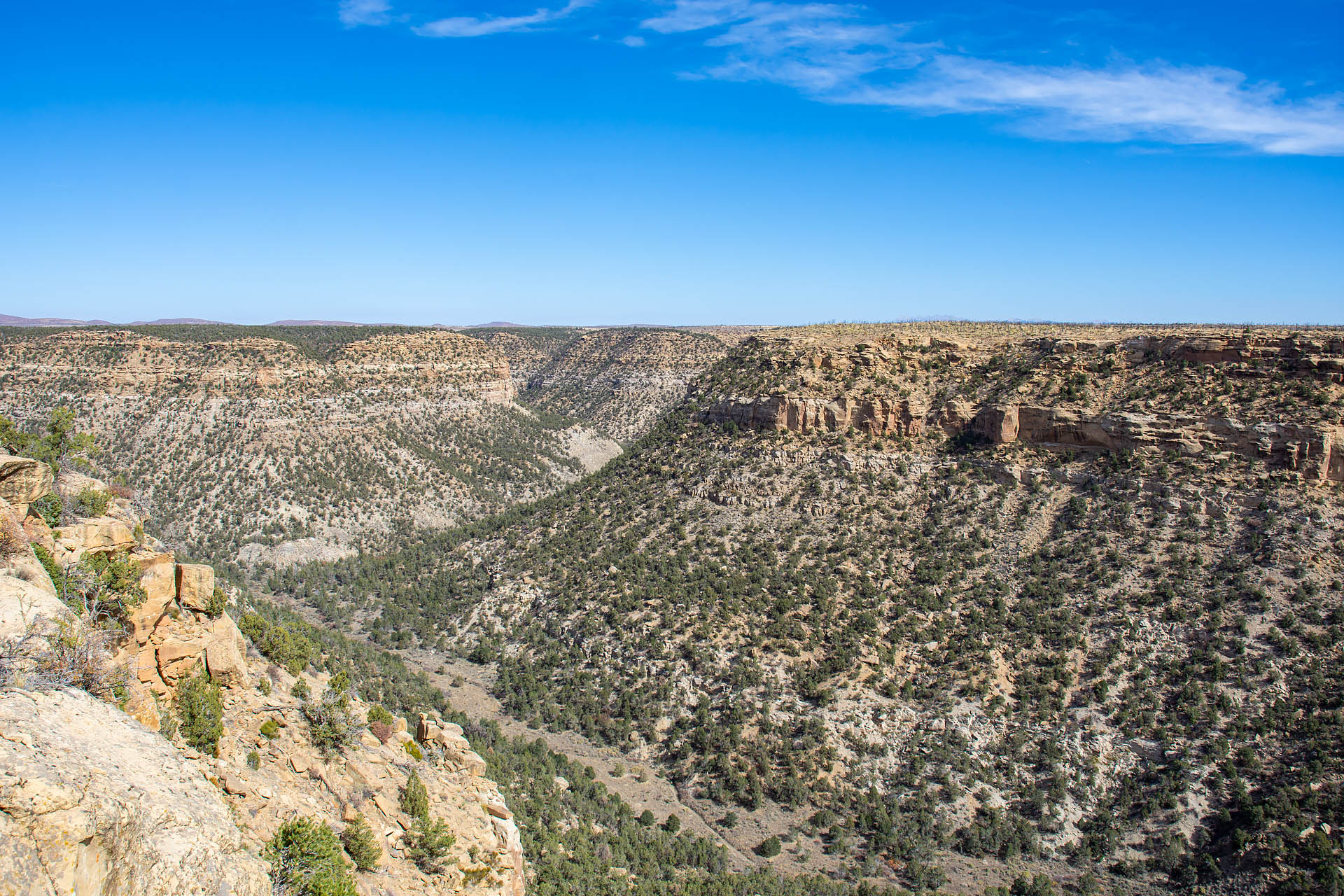 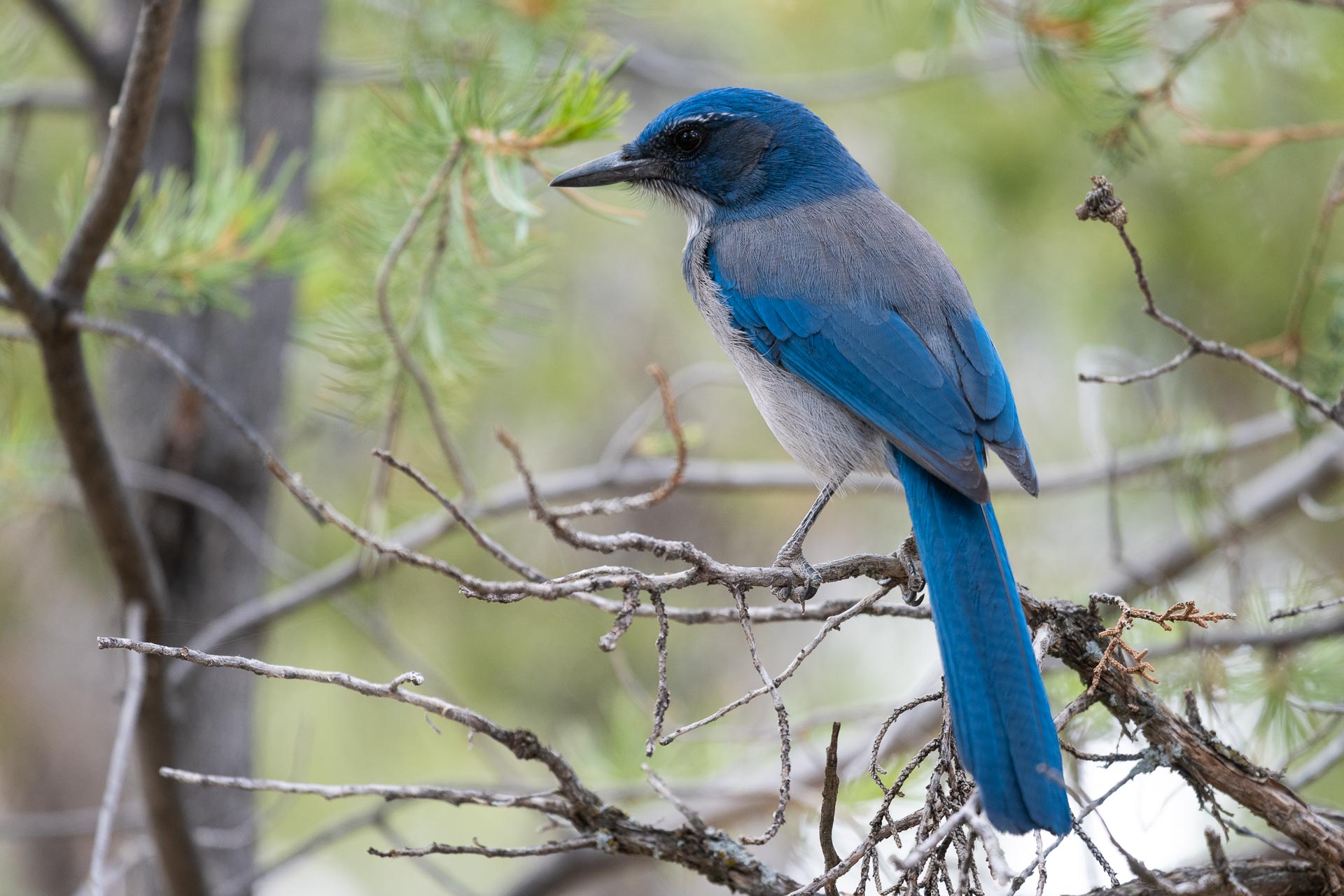 A 2.4-mile loop through Spruce and Navajo Canyons, the Petroglyph Point Trail begins behind the Chapin Mesa Archaeological Museum. Rolling up and down the canyon’s sandstone walls, the trail snakes through a few narrow passageways to a large petroglyph panel about 1.5 miles from the trailhead. The artwork includes images of human and animals forms, handprints, and striking geometric shapes carved into the Cretaceous period sandstone. According to modern-day Hopi elders, the petroglyphs may tell the story of two Native American clans that one occupied the region.

In addition to the intriguing glyphs, the trail also offers an impressive view of Spruce Tree House from an overlook near the museum. This is the best spot in the park to observe the ruins, as they are currently closed to the public. The rock around the alcove is particularly unstable, and a series of rockfalls in 2015 forced the park to close the area indefinitely. 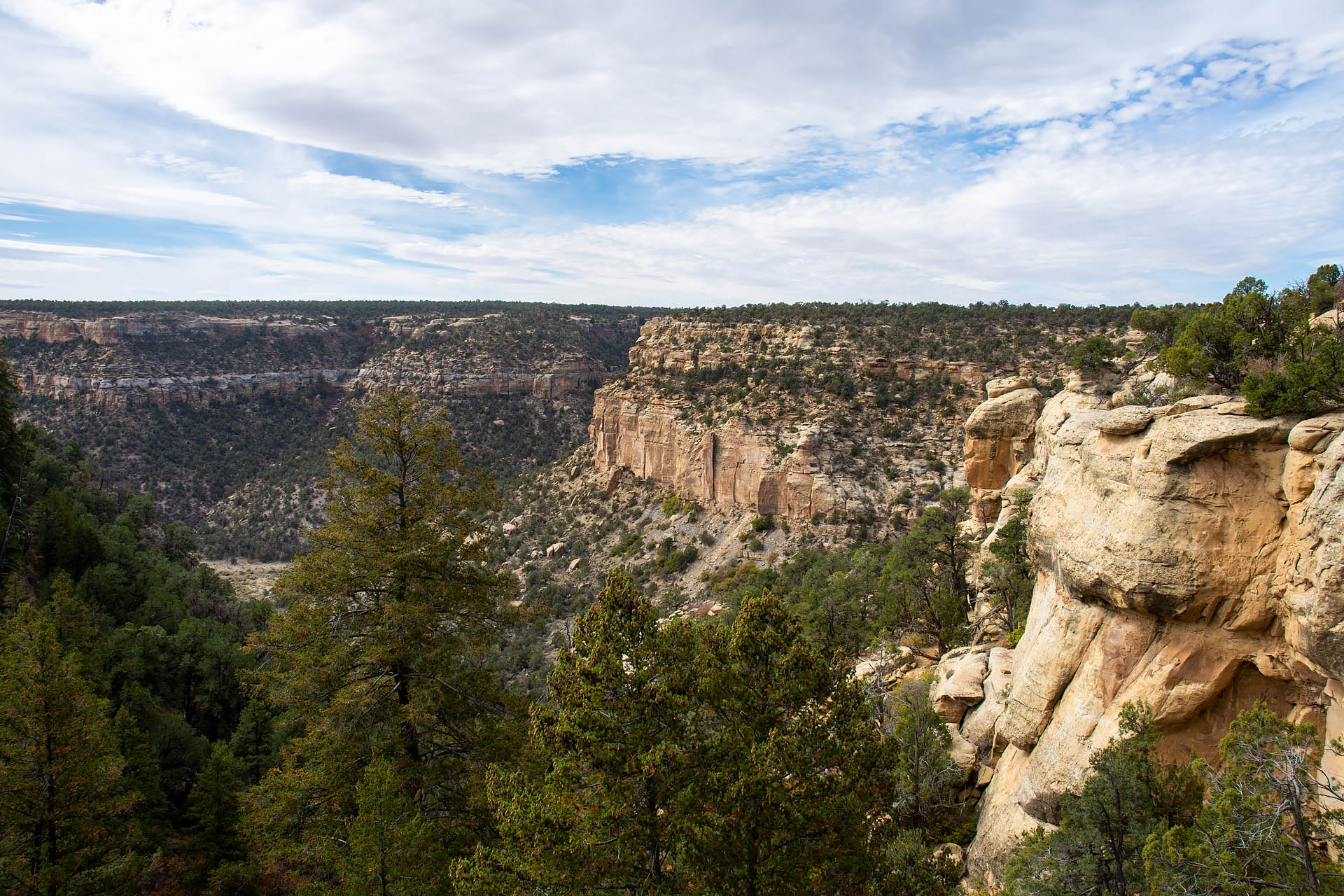 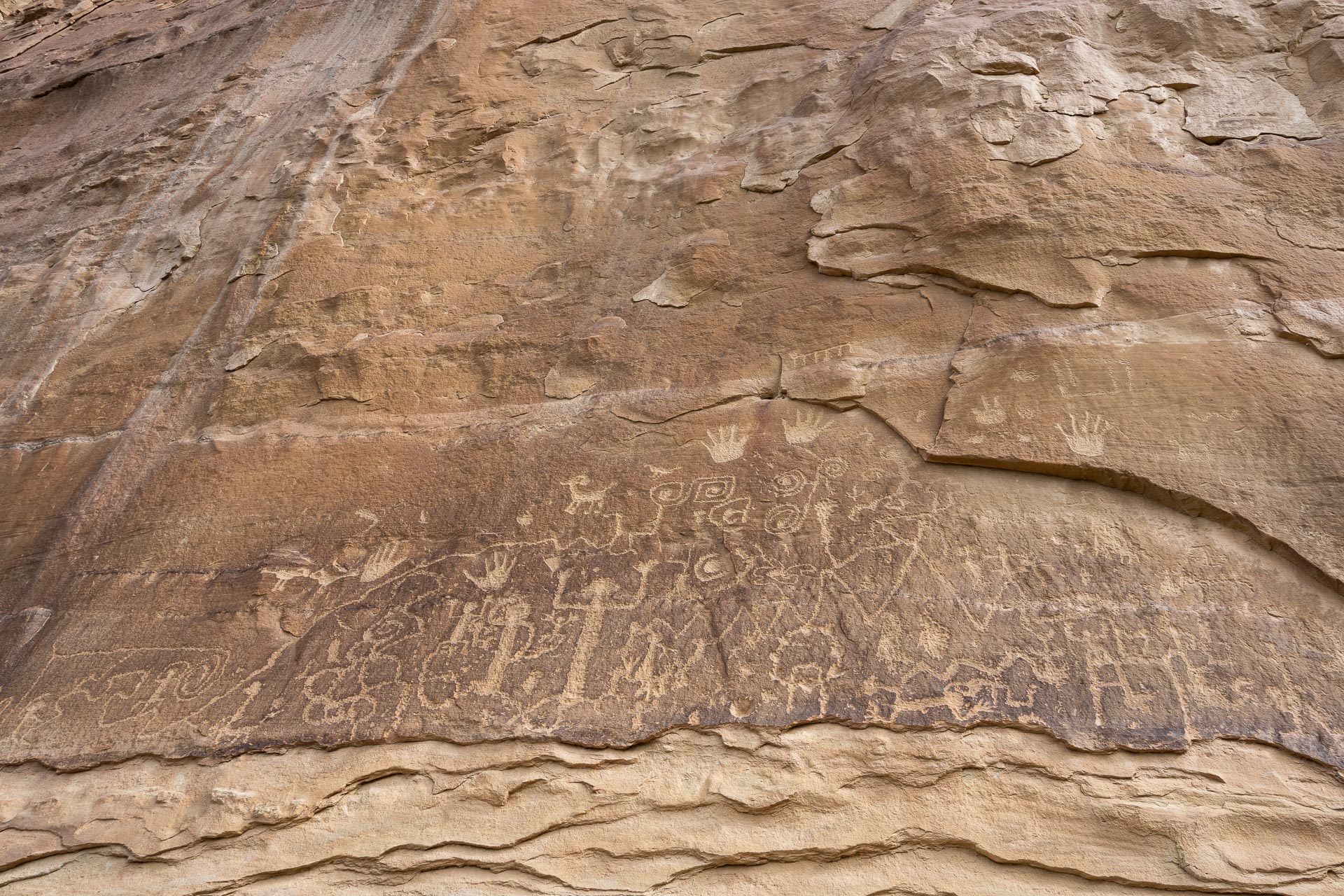 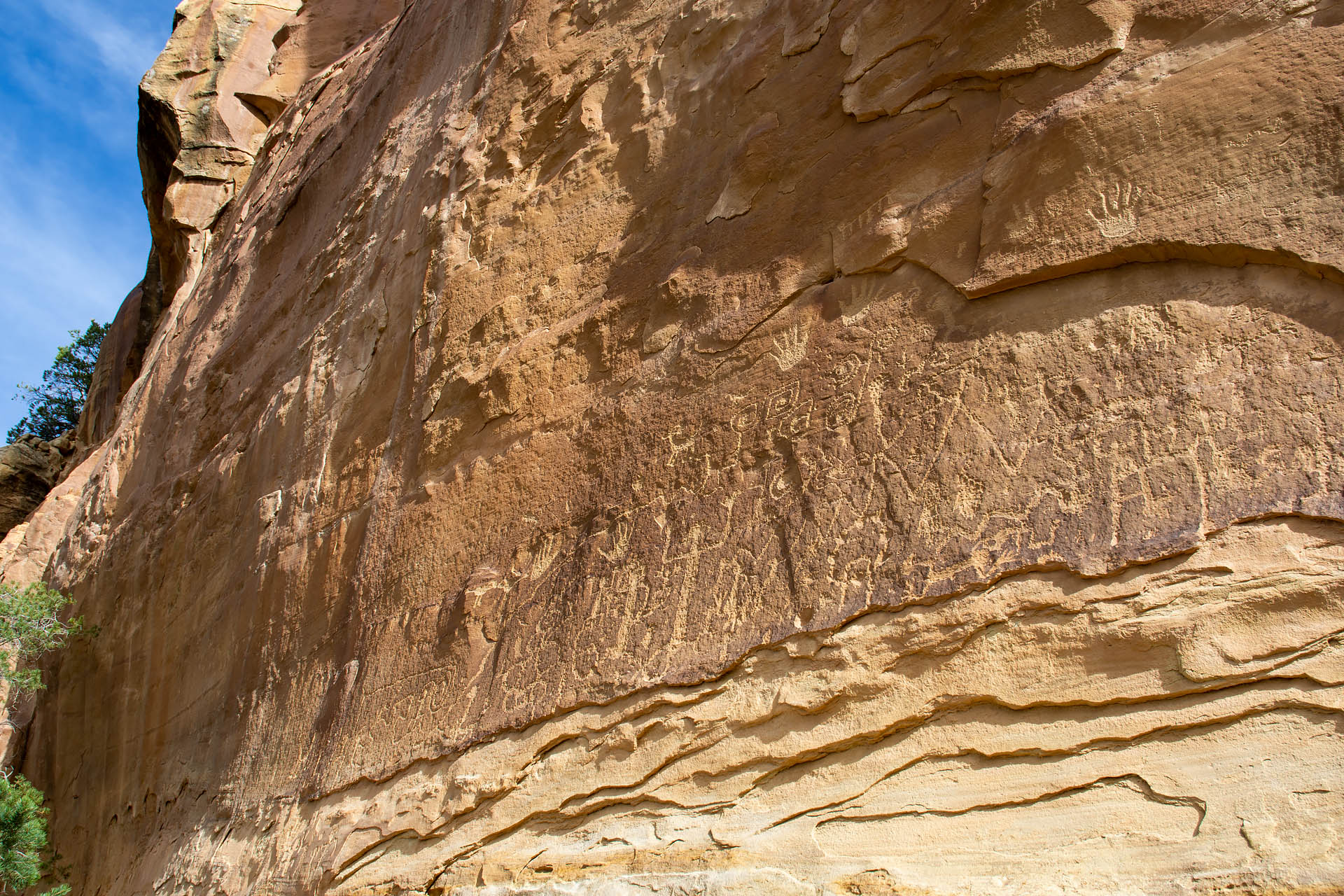 1 While the park entrance is right off Highway 160 outside of Cortez, the ruins are a good distance from the park entrance. The road winds up mountain passes at elevations between 6,900 and 8,600 feet and, while the views are sweeping, it will take time to navigate down to the (one-way) loop roads that navigate the ruins. From the park entrance to the museum, it’s about 20 miles (35 minutes). It’s about 40 minutes from the entrance to Cliff Palace, and about an hour from the entrance to Long House (Wetherill Mesa). Make sure you factor in enough driving time when planning your visit. For more information about getting around the park, check out: https://www.nps.gov/meve/planyourvisit/gettingaround.htm.

2 If you are interested in learning a bit more about the history and culture of the tribes that called Mesa Verde home, the Chapin Mesa Archaeological Museum offers visitors a glimpse of Ancestral Pueblo life through dioramas and a small collection of artifacts.

3 For more information on guided tours of the ruins, including pricing, schedules, and reservations, check out these two links: https://www.nps.gov/meve/planyourvisit/guided_activities.htm & https://www.nps.gov/meve/planyourvisit/visitor_services_schedule.htm. The ruins can only be visited on ranger-led tours, and tours are seasonal – typically running from late May through either September or October (depending on the site).

4 If you are interested in photographing the ruins, make sure to bring a telephoto lens. Many of the smaller ruins are tucked into narrow alcoves that are quite distant from the viewpoints. Likewise, if you want to just observe the ruins in more detail, bring along a good pair of binoculars.

6 While we thought fall was the perfect to time to visit Mesa Verde – both for the cool weather and avoiding the summer crowds – be aware that there are a number of seasonal closures. Tours of the ruins are only available through early autumn, and the road to Long House and Step House also closes during the fall and winter months.