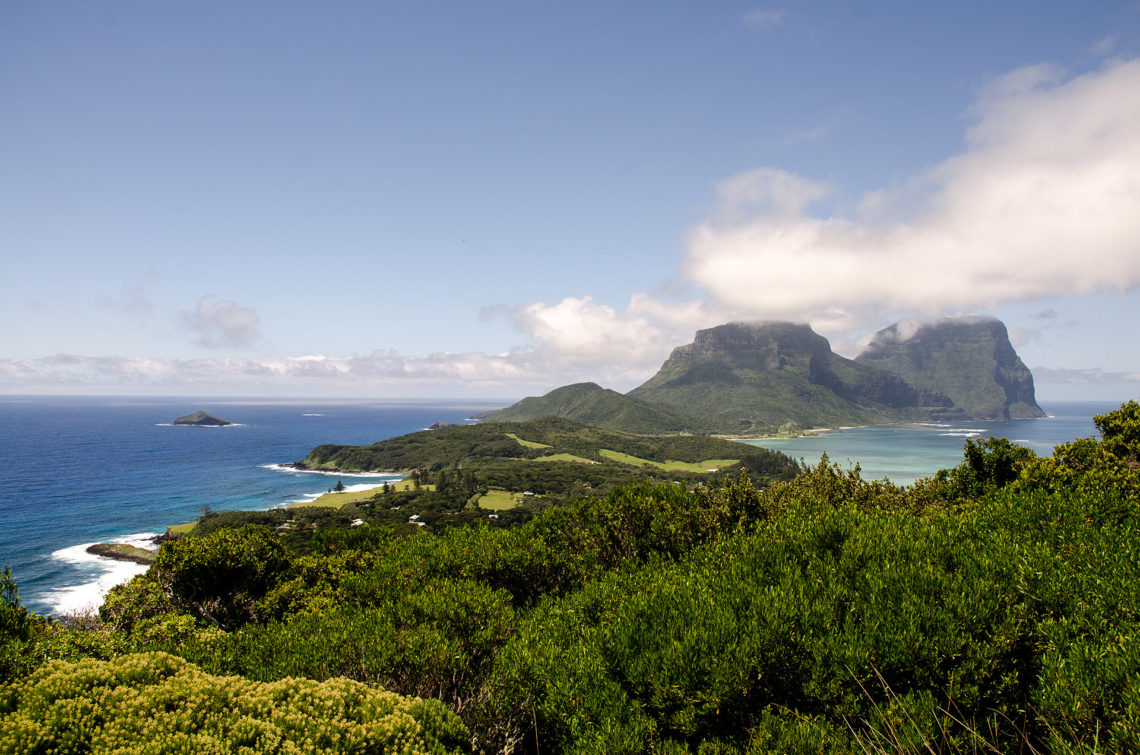 About 400 miles off Australia’s eastern coast, roughly equidistant between Sydney and Brisbane, lies the World Heritage Site of Lord Howe Island. Otherworldly in both natural and societal beauty, it’s as if time on Lord Howe froze decades ago… in an age of innocence and simplicity. No mobile networks exist on the isolated atoll, and the five broadcast television channels don’t promise “perfect reception.” No one locks the door to their villa – not because they choose otherwise, but because there simply are no keys. If you want to rent aquatic equipment or grab a beer from the unstaffed lodge restaurant, you drop the appropriate amount of cash or an ‘IOU’ in the honesty box, a nod to times past. At the modest post office, bearing a wall of merely 179 tiny mailboxes, a free public phone allows passersby to ring for a dinner reservation or a snorkeling tour. Across the street, a community bulletin board displays the daily news, with birth and death announcements as well as upcoming activities etched meticulously in colored chalk. Along the tiny avenues, there is one small shop for groceries and also a co-op, where islanders can exchange their wares. We eagerly tried some of Sharon’s tomato hummus, and Samantha’s coconut-chocolate brownies. After enjoying our delightful treats, we washed and returned the plastic containers to a wooden collection box outside the co-op, as everyone is careful to conserve and reuse. Commodities aren’t always easy to come by, given that one small cargo ship docks at the diminutive pier just once every two weeks. During the gap, a shipment will often arrive by air, though prevailing winds can frequently prevent the aircraft from reaching the island.

Because the island is only about six miles long and a mile wide, biking and walking are the major forms of transportation. There are no ferries, no cruise ships, and no tour busses. Timeworn bicycles are casually strewn along the roadside, rather than being securely locked to a rack. The beaches, streets, and walking paths are never crowded, as only 350 residents call Lord Howe Island home, and tourism is stringently regulated to allow no more than 400 guests per day. During the week, only a single Qantas turboprop per day touches down on the small airstrip, while “busy” weekends will welcome eight or nine arrivals.

The residents of Lord Howe are as easy-going and blissful as the island’s honorable culture suggests, and everyone seems to wear many hats. Steve, an effervescent fourteen-year resident, is not only the head chef at Pandanus and the museum’s Coral Café, but he also owns the Banyan Apartments, reports for the [infrequent] local newspaper, works at the post office, and transports island guests back to their lodges after enjoying a meal at one of his restaurants. As he drove a group of us home one evening, he was surprised to find that none of us had seen the island’s famous ‘mutton birds,’ seabirds who retreat to deep holes along the forest floors every night, after spending the day on the ocean. With an abrupt turn of the steering wheel and exuberant declaration to show us the unique creatures, our post-meal taxi turned into an impromptu mutton bird hunt in the pitch darkness.

Everyone on Lord Howe seems to be like-minded – warm and welcoming, and wanting nothing more than to share the happiness of their island life with friends and guests. Interestingly, everyone we encountered (both residents and fellow guests) bewilderingly asked us how we had ever heard of Lord Howe. Each person repeated the same chorus – ‘most Australians don’t even know of Lord Howe Island.’ After a week on the unblemished shores, it is easy to see why everyone protectively guards the isle as a wonderful, hidden treasure; it truly is paradise found…

Lord Howe’s natural beauty mirrors that of its casual culture. The gentle waves of the Tasman Sea lap against velvety, white-sand beaches, shaded by rustling palm fronds. Vibrant azure lagoons glisten in the glow of the afternoon sun, and shifting shadows of shallow coral cays can be discerned through the translucent ripples. On the southern tip of the island, the verdant slopes of Mount Gower and Mount Lidgbird are bathed in warm sunlight, as cottony white clouds hover between the two summits. White terns and shearwaters glide gracefully overhead, and often the only sound you can hear is their occasional chirp or squawk, briefly interrupting the soothing sound of the waves.

On the secluded shores of Lord Howe Island, everything is simple and everything is idyllic. I’m not sure I can adequately sum up my adoration for this unparalleled island, or paint a picture that captures the true magic and wonder of Lord Howe. Between the unspoiled natural splendor and utopian community, I’m certain that I could comb every inch of the globe and, in a million years, I’d never find another place like Lord Howe Island. 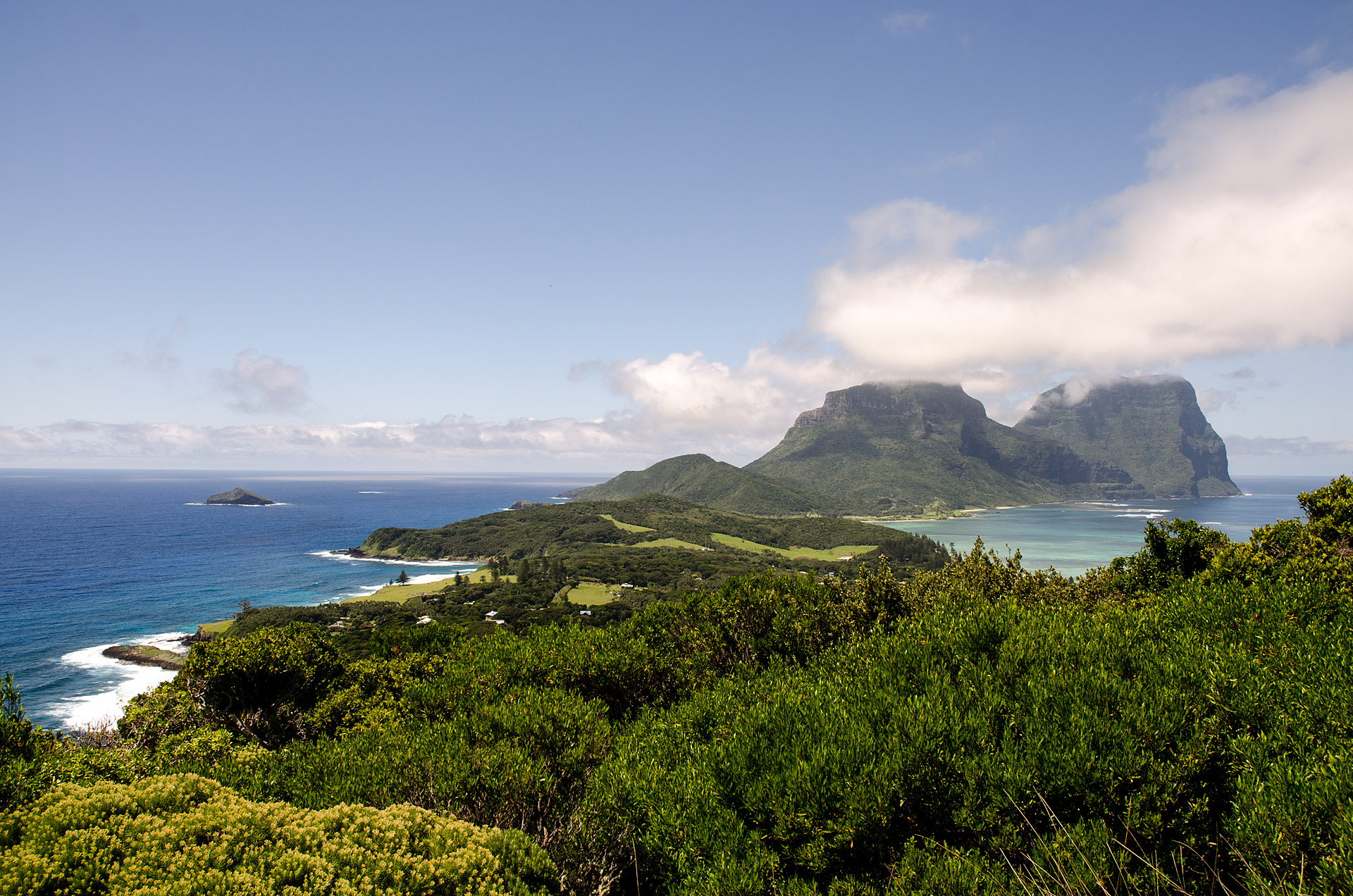