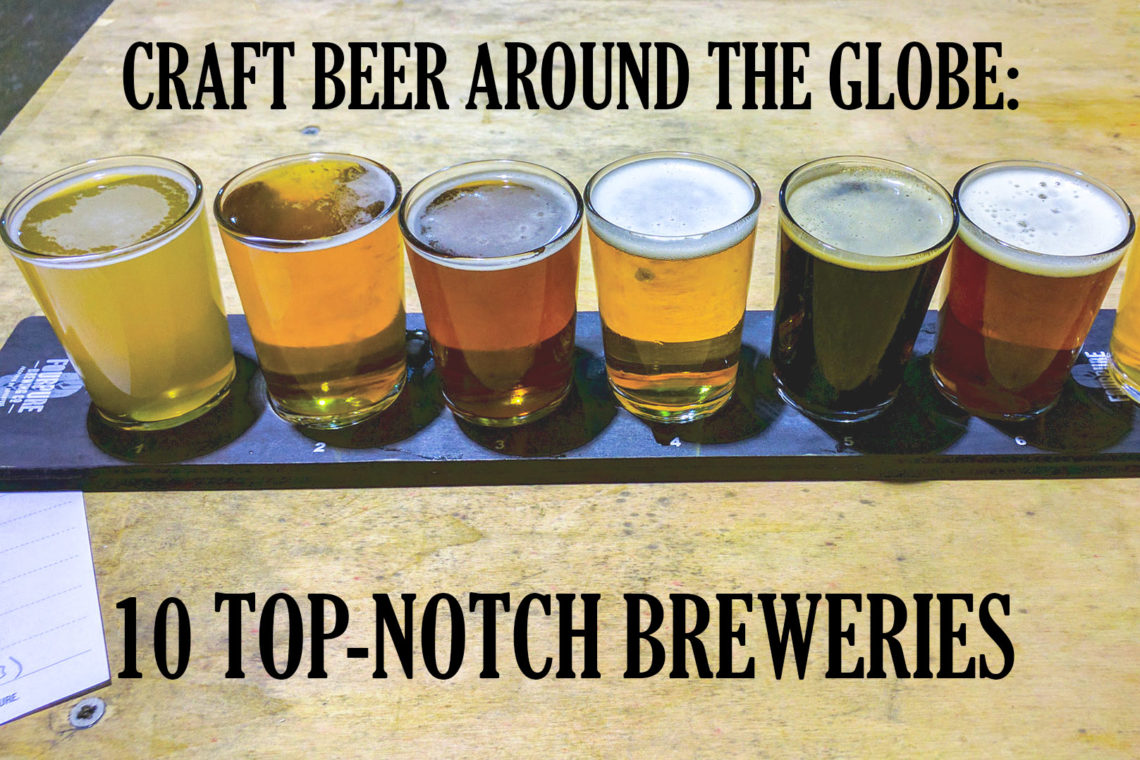 A couple of craft beer enthusiasts traveled the globe for a year. What did they find?

Well, while we certainly were not able to taste every microbrew from every craft brewery from every city we passed through, we did endeavor to sample at least a few brews from each country we visited. It should be noted that our tastes strongly favor the bold, bitter & citrusy hop flavors of pale ales and India pale ales… so if you are an impassioned hop-lover, this list could be for you. All told, we sampled 196 beers from 32 countries. From New Zealand’s famed Nelson hop region to London’s hip and flourishing craft beer scene, here’s a rundown of our favorite beers and their ingenious brewers:

They’re only open Friday & Saturday, but the extensive menu of delicious, hopped-up microbrews at Fourpure’s Bermondsey tap room makes it a must-visit if you’re in the city over a weekend. Better yet? Fourpure is at the southern end of the ‘Bermondsey Beer Mile,’ a 1.5-mile route stretching from London Bridge to South Bermondsey where craft beer aficionados can sample flights from six different craft breweries.

Our favorites from Fourpure:

Another brewery serving up some tasty ales is also conveniently located along London’s Bermondsey Beer Mile. We loved pretty much everything we tried from The Kernel, with the Ella being our favorite of the bunch. If you are not in London on a Saturday – the only day the brewery is open – check out We Brought Beer, a terrific craft beer store with three locations (Tooting, Clapham Junction, and Balham) that offers a host of local selections (The Kernel & Fourpure included).

Our top picks from The Kernel:

About 50 km northwest of Nelson, and a mere 15-minute drive from the stunning Abel Tasman National Park, Hop Federation is brewing up big hop flavors in Riwaka – a tiny, bayside town in the Tasman district’s hop heartland. The team in the tasting room was exceedingly friendly and knowledgeable, and the small brewery offered seven taps to sample as well as bottles for purchase. Our favorites of the lot? The Red IPA and West Coast IPA… though the next three listed followed closely behind: 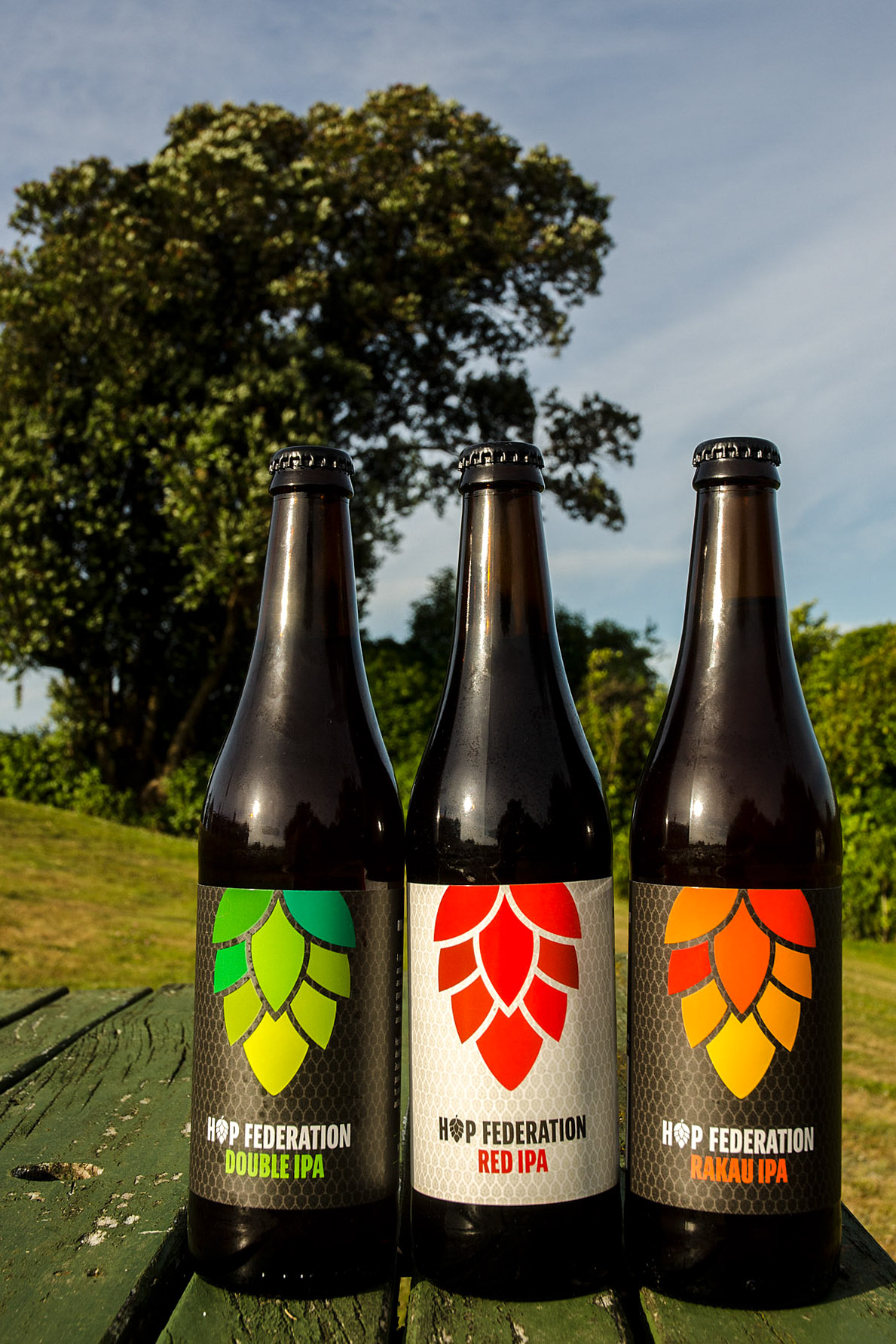 Just across the Cook Strait from the South Island’s Nelson breweries, Choice Bros. Brewing is cooking up some tasty beers in downtown Wellington. Their beers are served at their recently-opened (November 2016) bar and eatery, HUSK. We visited back in January 2016, before the bar’s opening, and found their beers at the nearby Hashigo Zaki – a fantastic little pub just up the street, if you’re looking for another great spot to enjoy a beverage. Opportunely, both establishments are only a few blocks from New Zealand’s prized national museum, the Te Papa Museum, which showcases some beautiful exhibits of the local Maori culture.

While we never made it out to the brewery – about 10 km east of Budapest’s Inner City – we were able to sample Monyo’s tasty Flying Rabbit IPA at Töltő, a great little café in Budapest’s Jewish Quarter. Not only does Töltő offer a small selection of local craft [bottled] brews, but they specialize in grilling up some tasty sausages with unique flavors and an artistic flare. Craft beer and fancy sausages… what more could you need?

[Note: we also sampled the Tavoli Galaxis IPA (below) at Tolto] 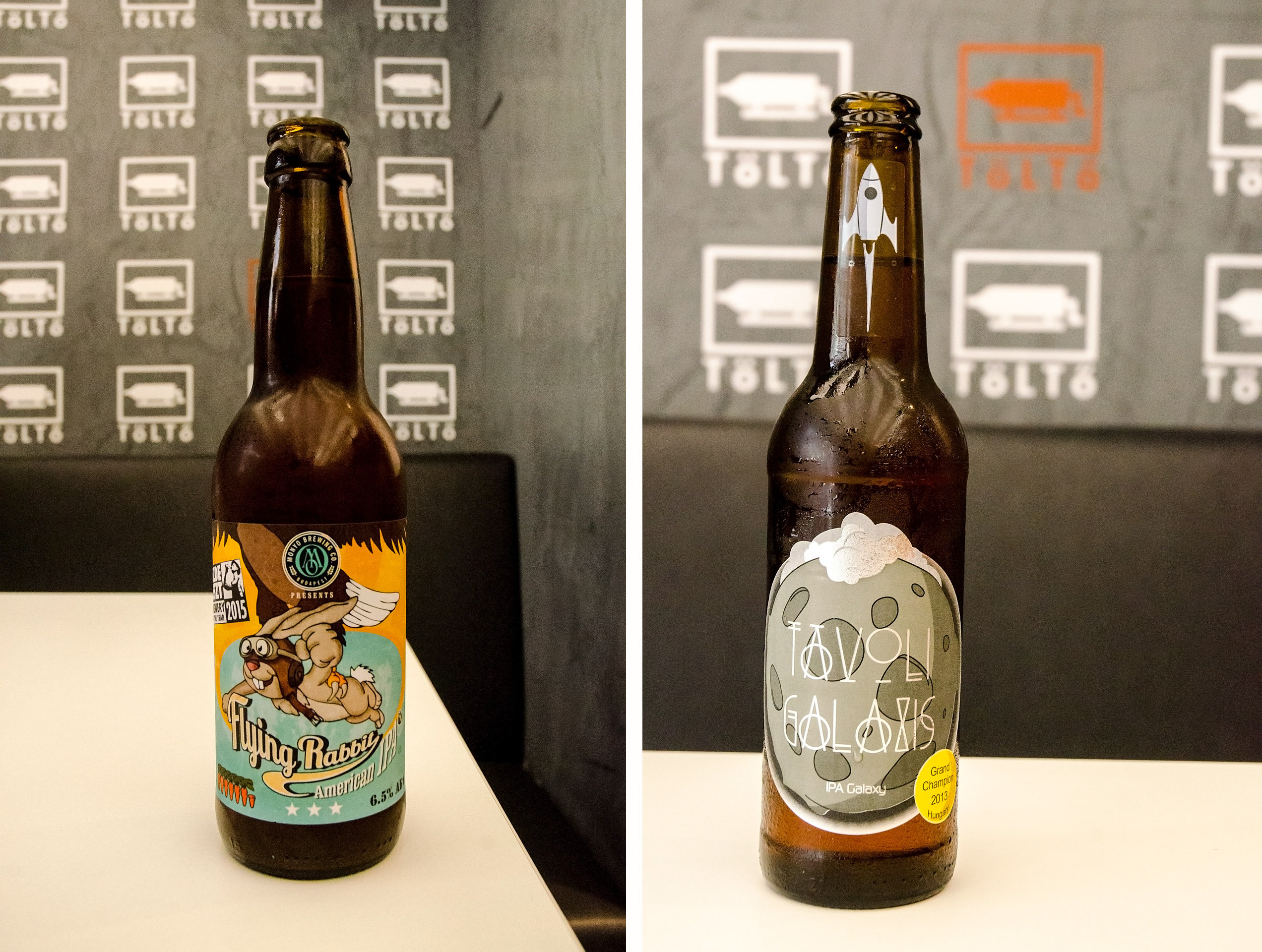 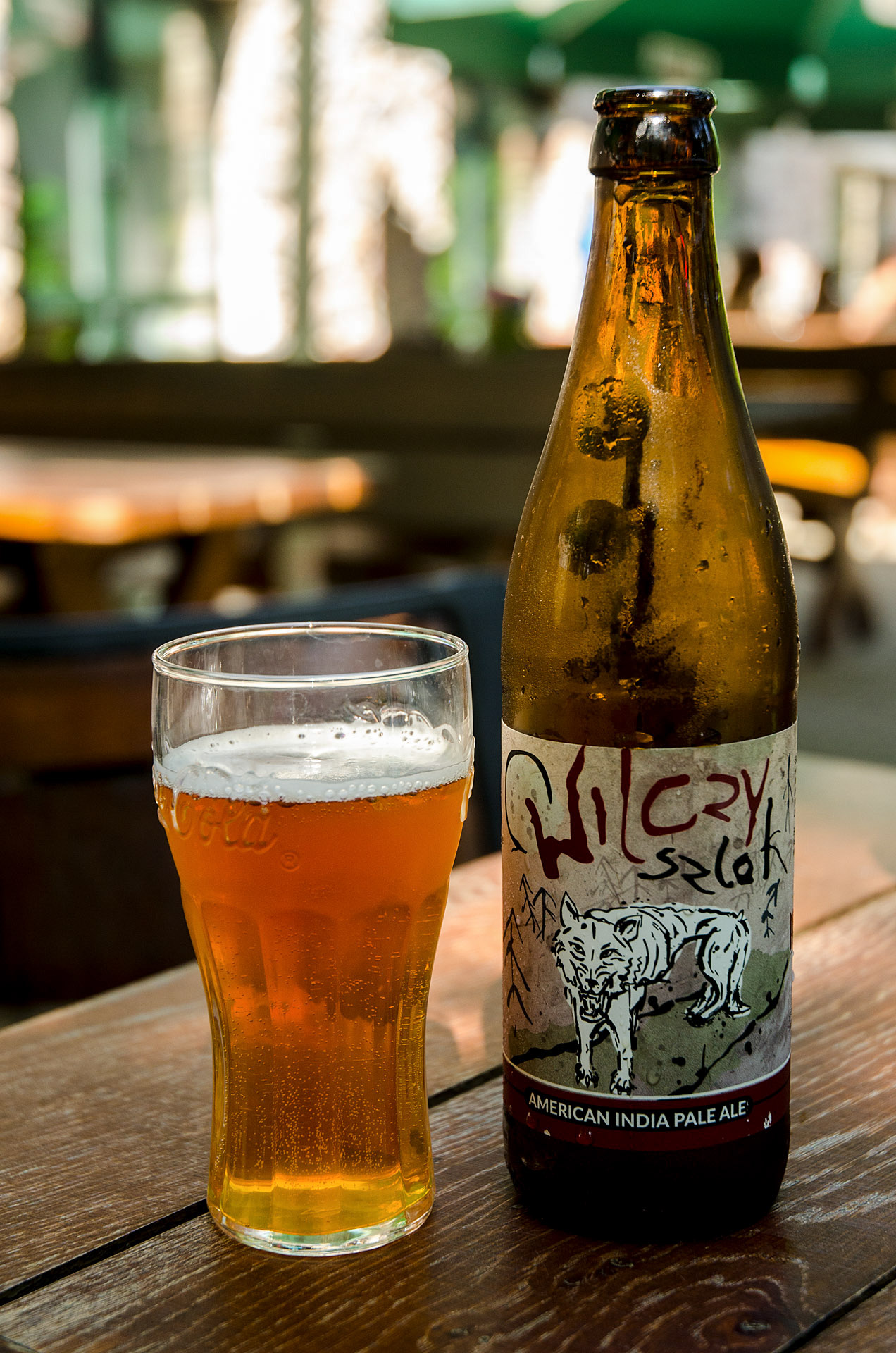 In the end, I suppose we had to pick an overall favorite. For us, top honors and our winner for ‘Best Brew Around the World’ goes to…

The West Coast IPA is dry-hopped with Citra, Mosaic, and Centennial hops, and has a great balance of bitter and citrus flavors. We’ve found that we typically now favor the bright, fresh flavors of the Citra and Mosaic hops, and with those at the forefront, the aroma and taste of Fourpure’s Shapeshifter were just awesome. We sampled it on tap at the brewery and were such fans, we purchased a few cans to share with family and threw them into our backpack for our flight back to the States. How do you know you really love a beer? When you wrap a couple cans – with a moderate to high potential for spillage – in a wad of synthetic t-shirts and shove them, along with several thousand dollars’ worth of camera gear, into a soft-sided pack that’s about to be flung carelessly into a cargo hold. Cheers to great beer and the sometimes-risky efforts we’ll make to enjoy it!

As a quick extra, we had to throw in the best place we stopped for a beer during our one-year journey. While we patronized numerous well-stocked bottle shops, hip brew pubs, laid-back breweries, cute cafes, and hole-in-the-wall bars, the most exceptional place to drink a beer was at a beer fountain out in the middle of Slovenia’s hop country.

While perusing an awesome little craft beer store in Ljubljana (Pivoteka Za popen’t), we struck up conversation with the affable girl behind the counter. A fellow beer enthusiast, she recommended some of the hopped-up local favorites before casually mentioning that her hometown was out in the middle of the rural, hop-growing region. She went on to tell us that they’d just opened a new ‘beer fountain’ two days prior, and suggested we check it out if we had time. Well, there’s always time for a spontaneous adventure when you’ve got a year on the road and nowhere to be. Thus, we headed to Zalec for the grand opening of the Fontana Zeleno Zlato:

About 45 minutes (66 km) east of Ljubljana, the small town of Zalec lies in the middle of Slovenia’s lush hop valley. The Savinja Valley is celebrated for its Styrian (Golding) hops – lightly bitter and delightfully aromatic. Our visit in September 2016 happened to coincide with the opening of the Fontana Zeleno Zlato (‘Green Gold Fountain’) – a community-funded ‘art exhibit’ in the middle of small, public park. The innovative beer fountain features five taps pouring rotating draughts from small, local breweries that showcase the resident Styrian hops. Six Euros earns you an NFC-tagged glass mug, which is enabled for 5 one-deciliter (~3.3 oz) samples of your choosing. The beers change regularly, so you never know what’ll be flowing from Zalec’s beer fountain – a refreshing, Styrian surprise in Slovenia’s heartland. 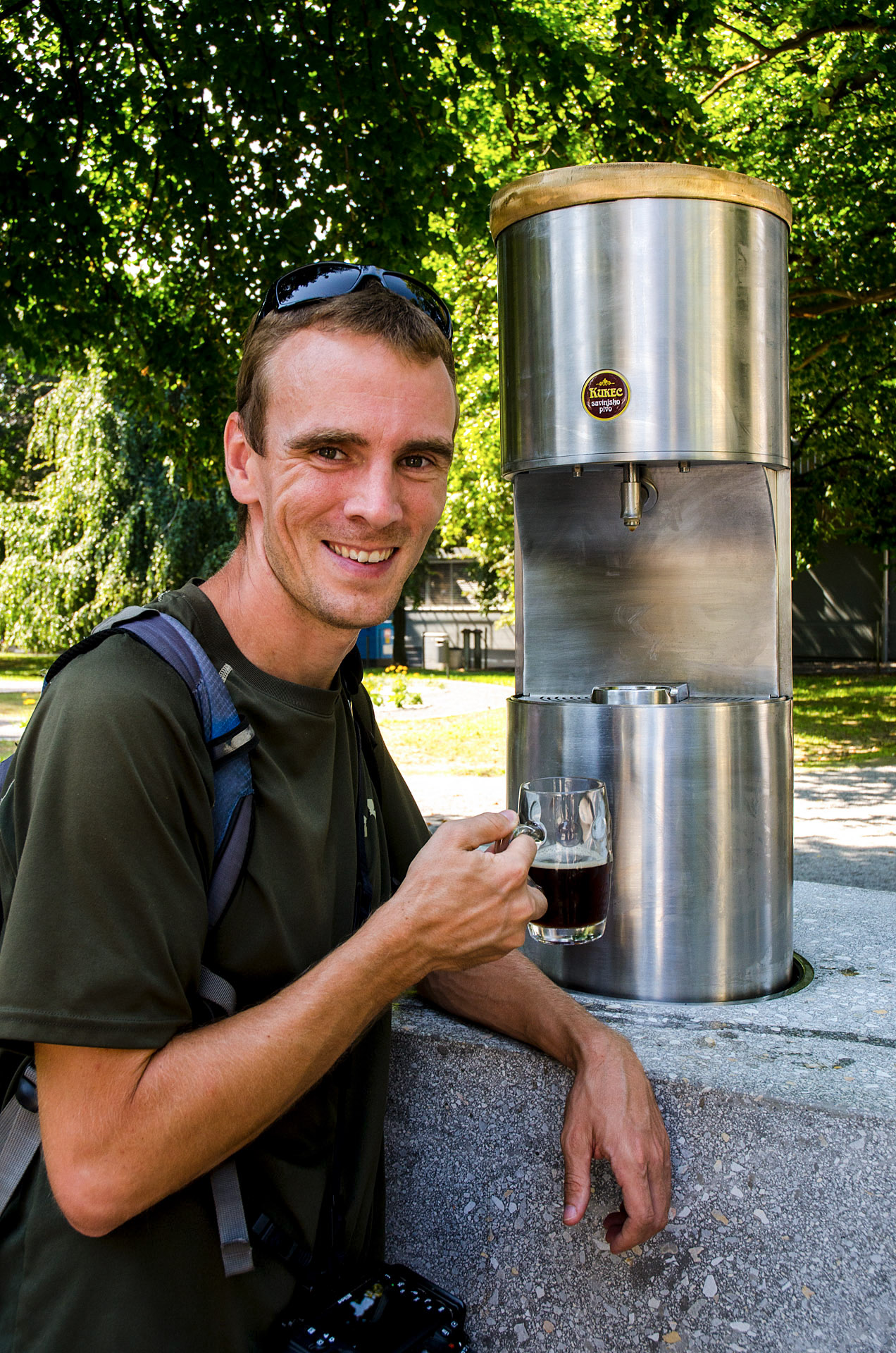 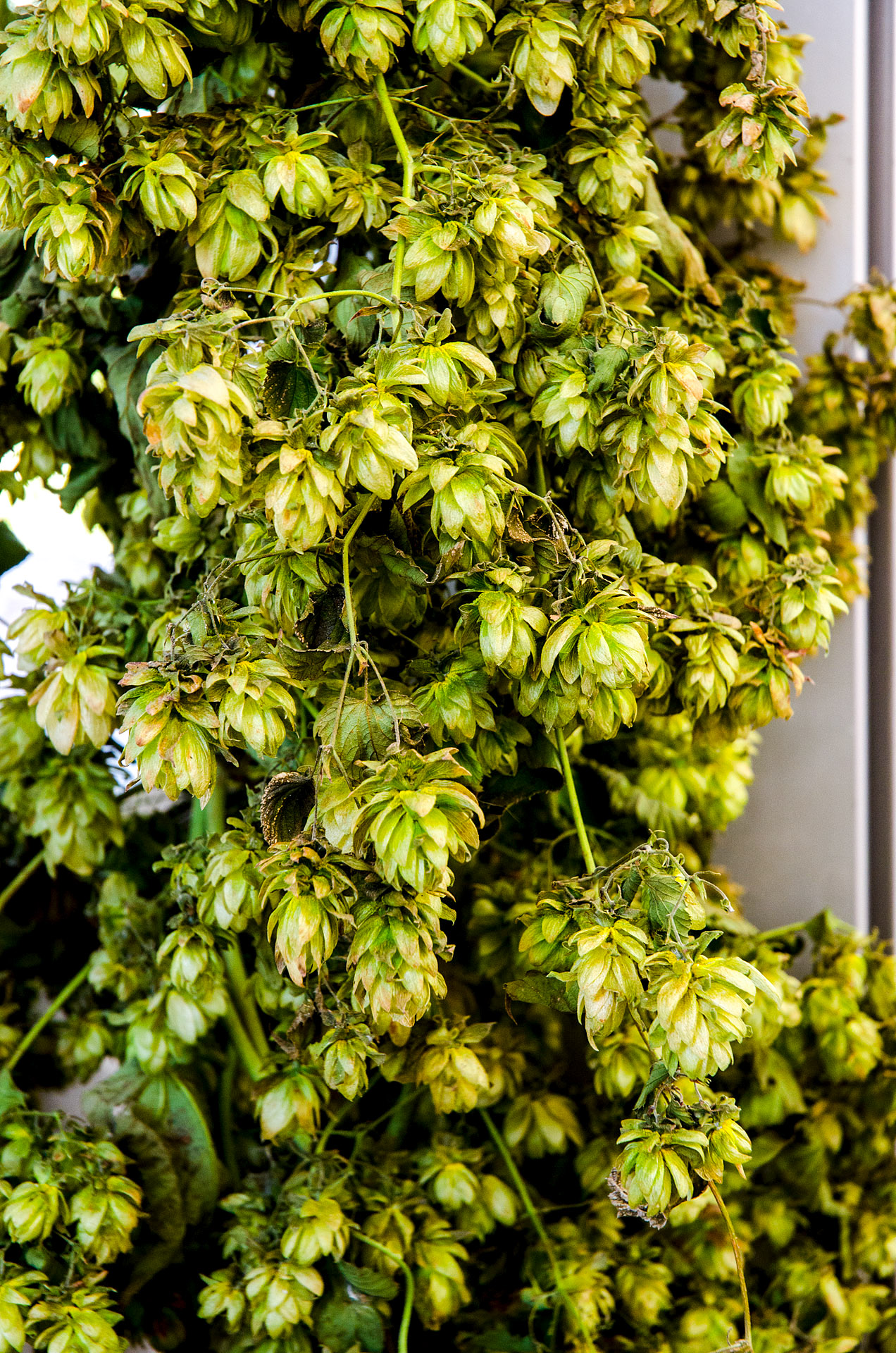 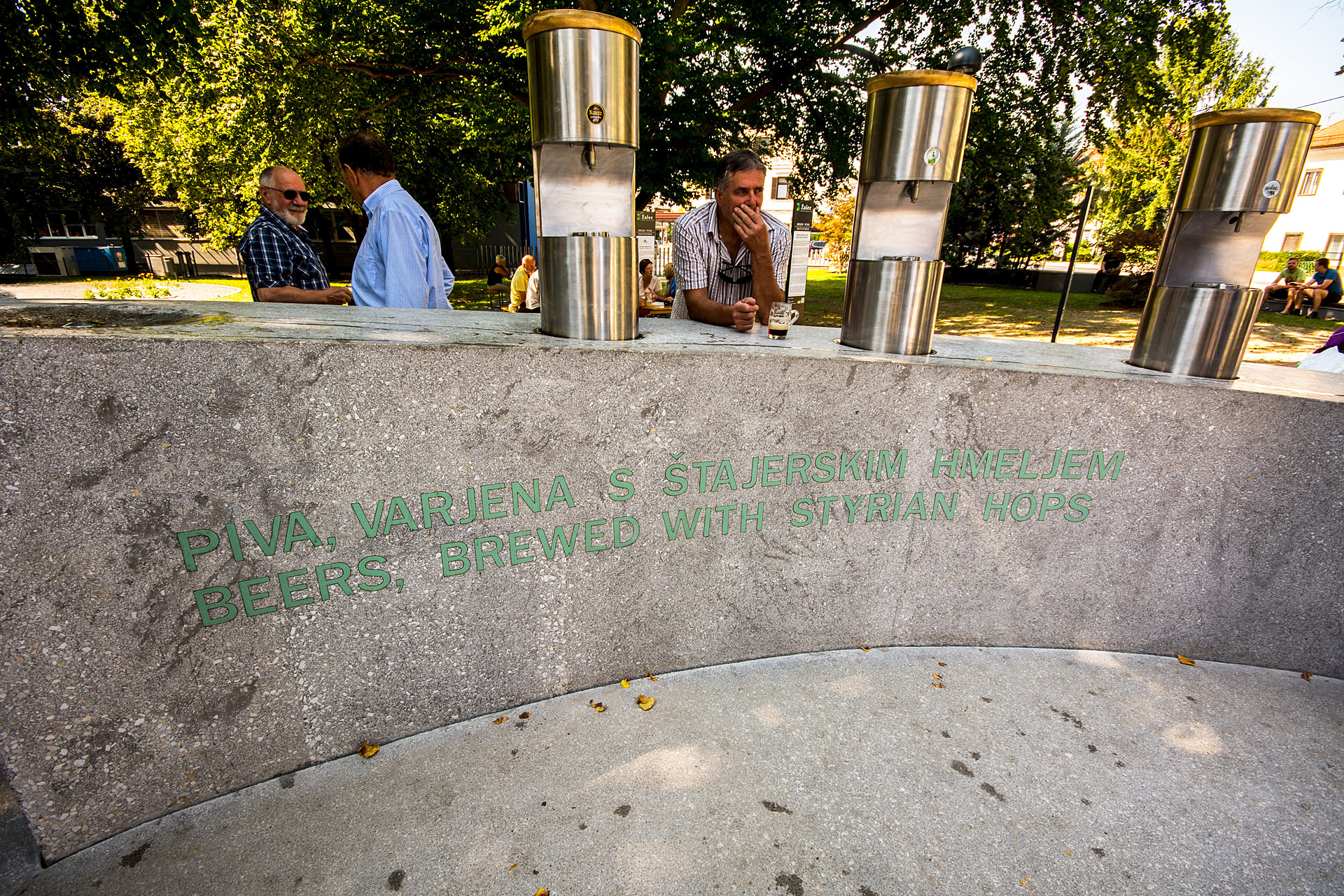 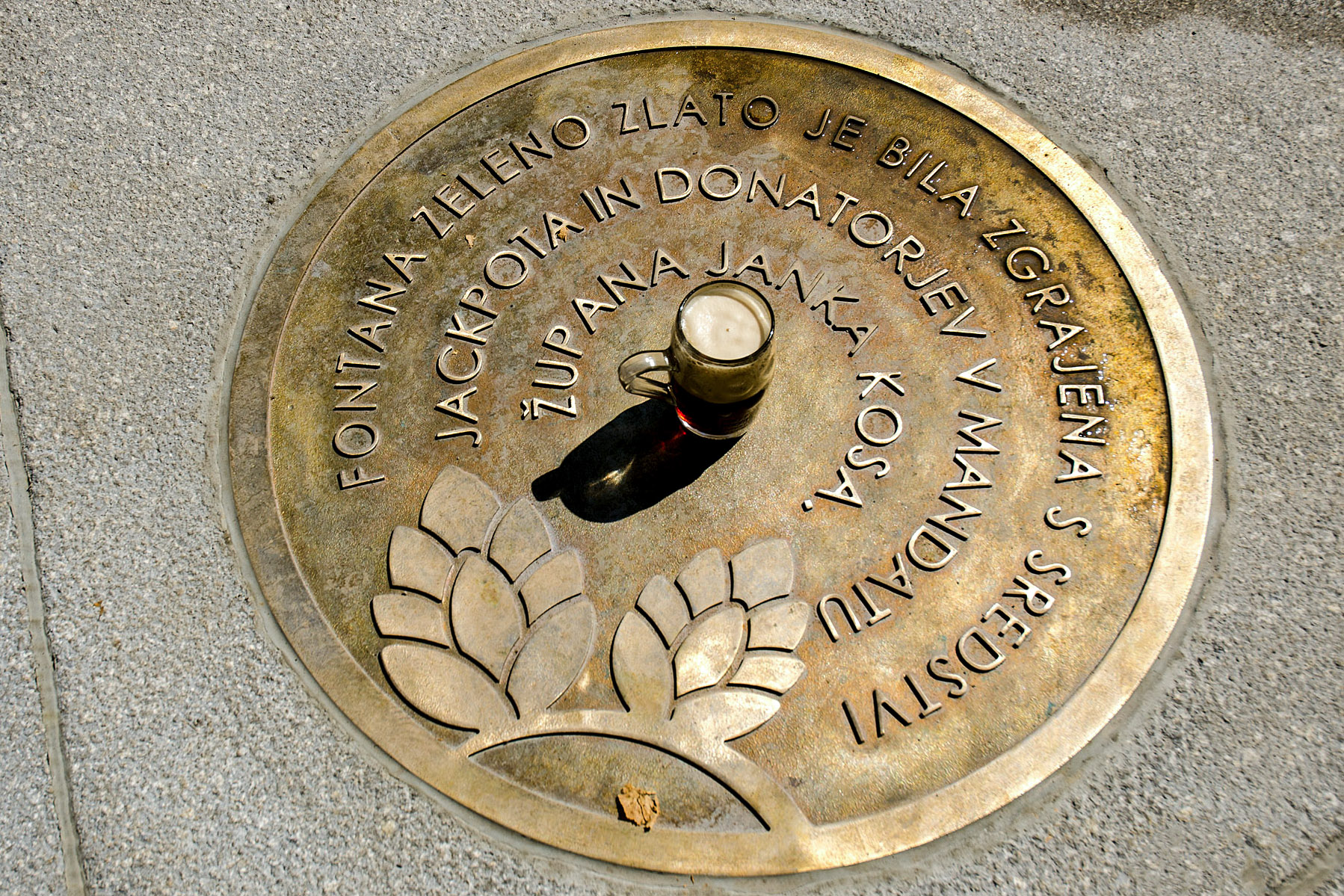