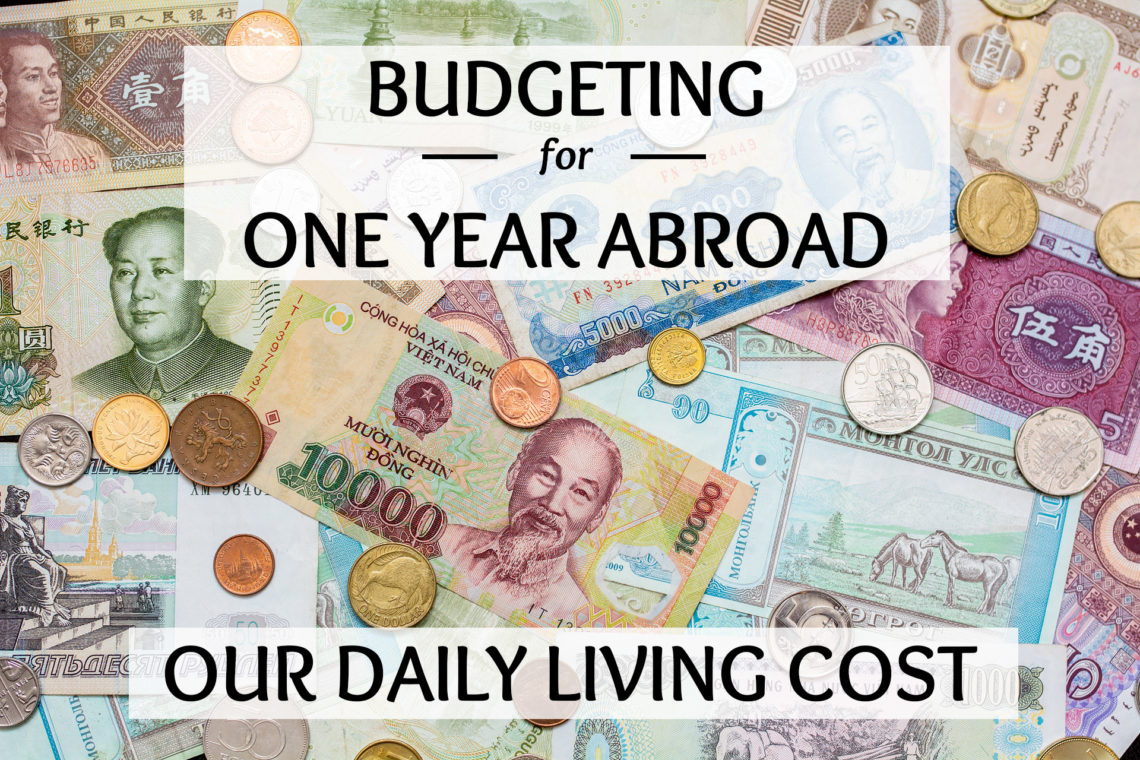 Making the commitment to pack up and spend the world sightseeing is an exciting prospect, but at the same time daunting and perhaps a bit surreal. We are not independently wealthy by any stretch of the imagination, but we are pretty diligent penny-pinchers and savers. Before we left on our long-term adventure, my mind continually questioned, ‘can we really do this on a practical budget?’ After months on the road, I learned that the answer simply – if not surprisingly – was yes.

Before setting off on your grand adventure, you really have three main points to consider:

(1) What is the maximum budget I’ll allow myself to spend?
(2) What lifestyle am I expecting to maintain overseas?
(3) What is most important to me on my journey (i.e. where should I splurge and where am I willing to make concessions)?

If you are looking for plush accommodations in expensive countries (Western Europe, Australia or New Zealand), you’ll either need a pretty large budget or you may have to resign yourself to a shorter trip. If you’re on a shoestring budget, looking to stay in dormitory-style hostels in Southeast Asia or Eastern Europe, get ready to see some serious bang for your buck… we were shocked at how far we could stretch our dollar there without even really trying!

Overall, I’d say we live a pretty modest lifestyle. We don’t need 4- or 5-star accommodations or elaborate meals, and we’re content to be uncomfortable on long, public bus rides. That said, we’re also a couple in our mid-30s who spend countless, late-night hours editing photos or writing, and aren’t willing to settle for dormitory-style hostels that may have a more youthful, party atmosphere. We also consider excursions and activities paramount to enjoying our time exploring a new country, so we’re always willing to “sacrifice” some daily comforts in order to put more money towards SCUBA diving, caving, or paragliding. Please be aware, though, that I use the word sacrifice quite loosely here. While we’ve never been lacking for reasonable accommodations or meals, not just anyone can handle a PB & J sandwich nearly every day for 2–3 months straight (hell, even I had to start choking them down by the end). In sum, I suppose you could categorize us as low- to moderate-budget travelers: always looking for a bargain but not quite on a shoestring budget, yet also willing to shell out dough for – what we consider to be – priceless adventures.

To get a feel for what to expect when traveling to a variety of countries, we’ve compiled a whole lot of data from our year abroad and presented it in a series of (hopefully useful) charts and graphics. I feel like I tracked an appalling number of figures over the year, but I guess that’s the scientist in me. Give me some numbers to throw into a spreadsheet and graph and I’m happier than a pig in shit. Anyway, hopefully some of our budgeting details give you some idea of what to expect when traveling abroad, while proving that it’s easier than you think to get along well in your dream destinations.

All of our daily living costs are reported as the total for two people. If you are traveling solo, you can expect these numbers to decrease between ~30–50%.

We split our time fairly evenly between expensive and inexpensive countries – 7 months in NZ, Australia & Western Europe versus 5 months in Southeast Asia and Eastern Europe.

The cost of a good night’s sleep:

Depending on your budget, there are seemingly limitless options for an overnight stay: communal living in dormitory-style hostels, CouchSurfing, a bedroom or private apartment from AirBnB, small guesthouse rooms, an average hotel, or a five-star suite. We tended to hover around the cheap to moderate end of the lodging spectrum, typically staying in hostels or guesthouses with private rooms or in AirBnB rentals: 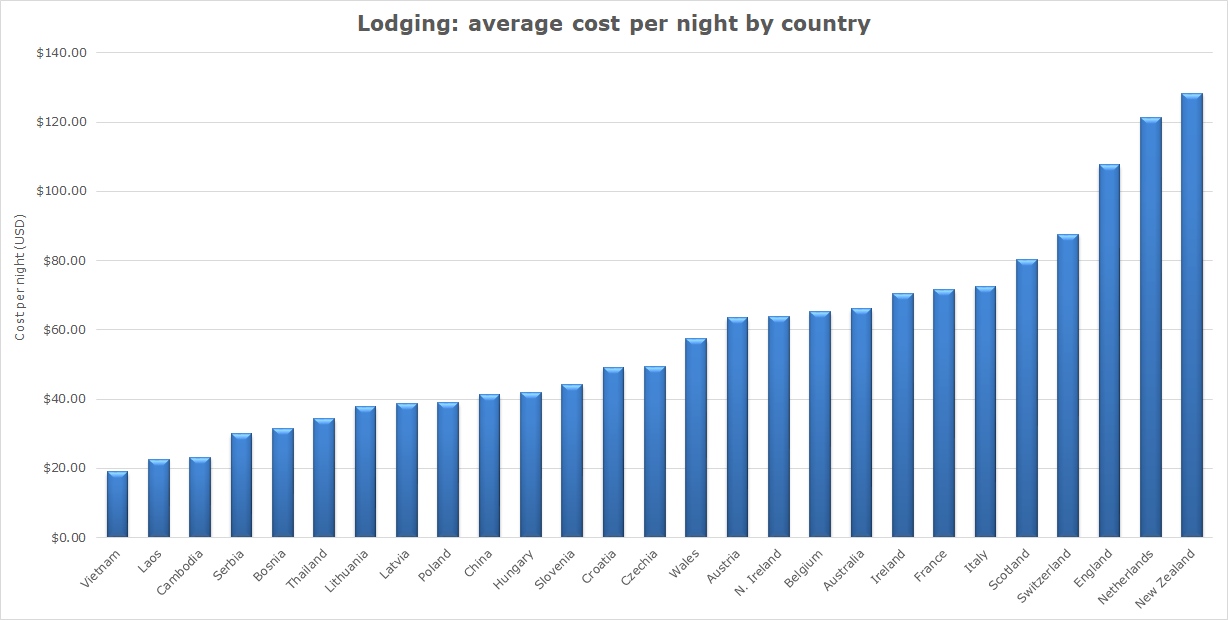 The effects of food on the daily budget:

In addition to lodging, food is the major area where we tried to keep costs down (to save money for activities & entertainment). Because of this, we did a lot of our own cooking – especially in NZ, Australia and Western Europe, where habitual restaurant dining can quickly cripple your budget:

Average daily for costs for two people by country: 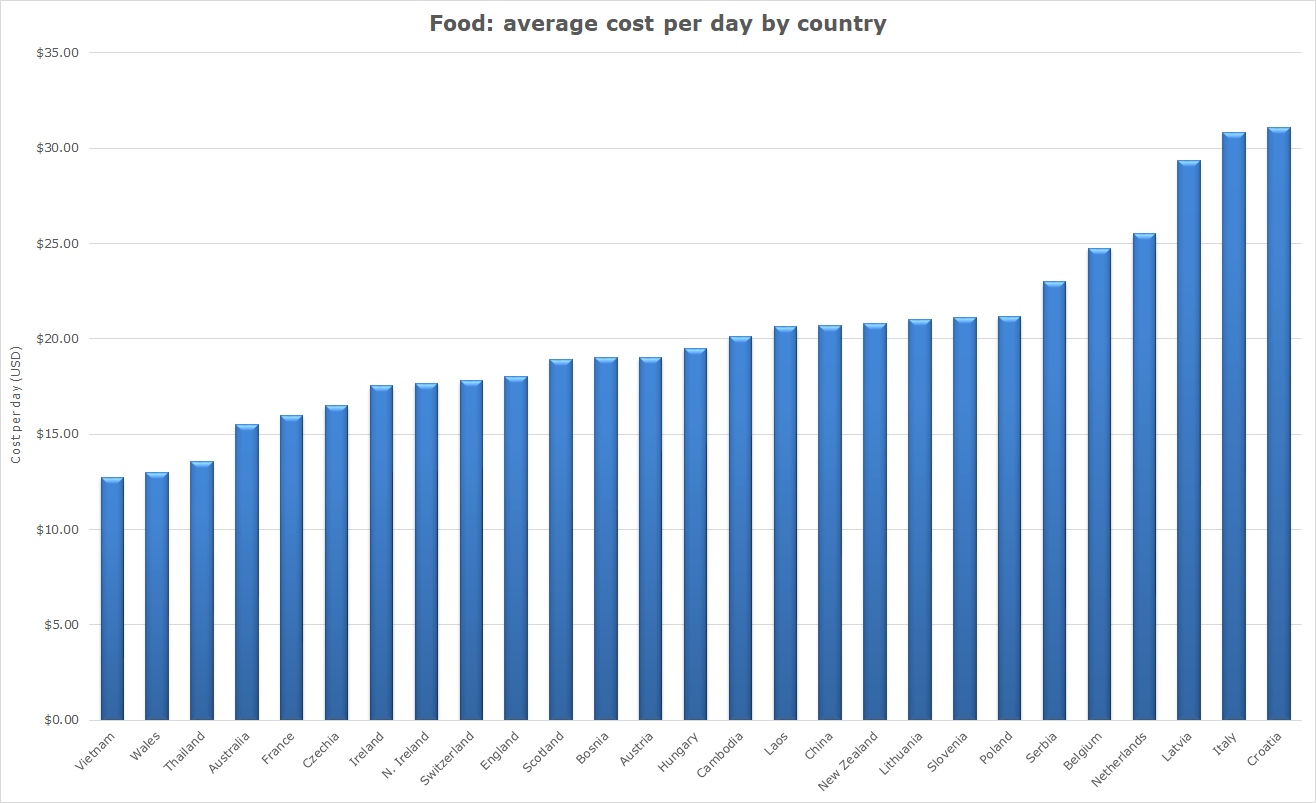 Note: Data does not necessarily reflect the categorically higher food costs in Western Europe and Australia, as we did a lot of own our cooking in certain countries. The results here are just to show a general trend of how much we were spending per day to eat.

Getting from point A to point B:

Predictably, ground transportation is often exceedingly cheaper than flying, making it a money-saving option if you have the extra time. The exception to this rule is in a handful of Southeast Asian countries (Vietnam in particular) where flying can be about the same price as a bus or train ticket, depending upon the destination. Because of this, we opted for ground transportation as much as possible: 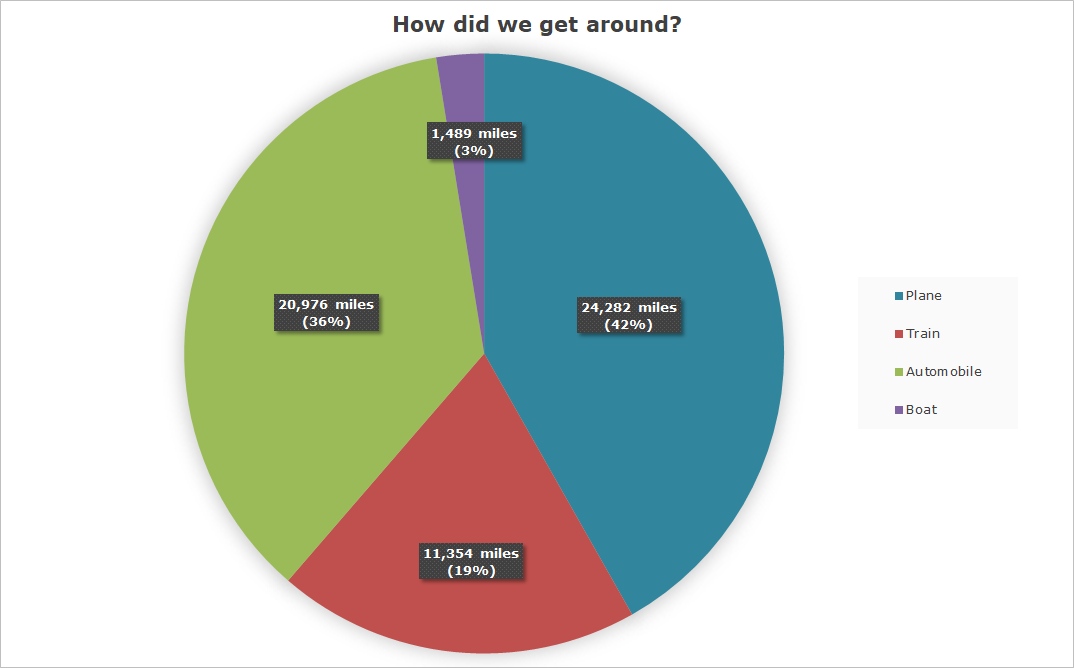 So, what is the daily cost of living (for a couple) around the world?

Unquestionably, the daily cost of living in Southeast Asia and Eastern Europe is astonishingly low. Conversely, if you’re looking to explore countries like New Zealand and Australia, or major cities in Western Europe, you’ll need to carefully consider your budget. Our daily living expenses outlined below include food, lodging and transportation. The final cost does not include any extra activities or entertainment, as they aren’t really essential for day-to-day life.

Average cost per day by region:

Average cost per day by country: 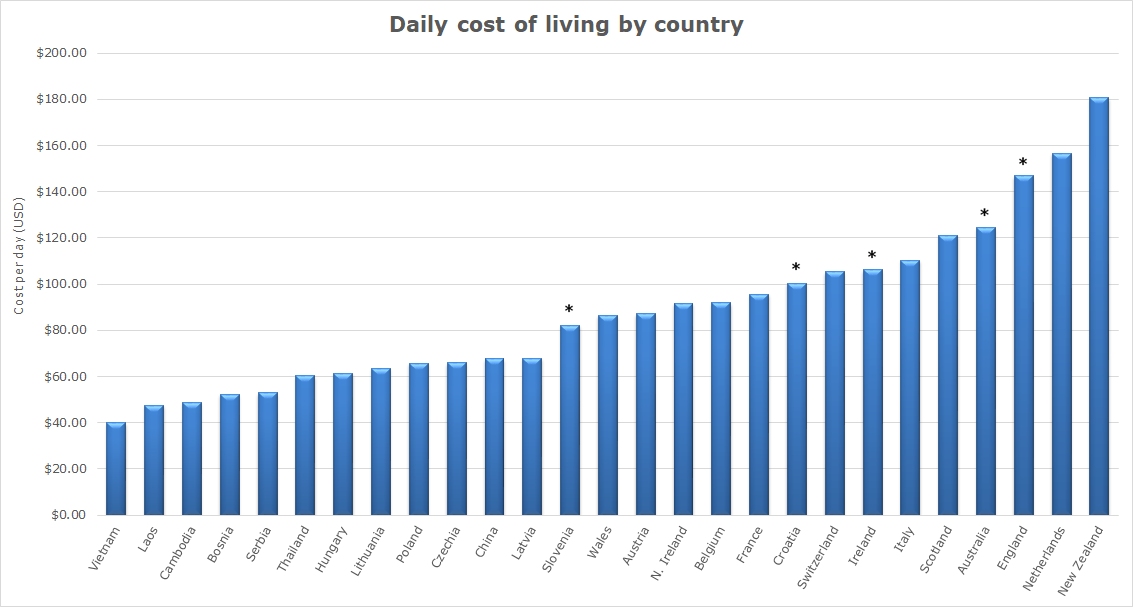 [*] Denotes countries where we rented at least one car, which often appreciably increased the cost per day. Without a car hire, we estimate the daily living costs would have been about $65 in Slovenia, $88 in Croatia, and $80 in Ireland (costs without hires were not calculated for Australia and the U.K.).

In total, one year of ‘necessary’ living expenses (food, lodging, and local transportation only) for two individuals with a modest lifestyle cost $30,738: 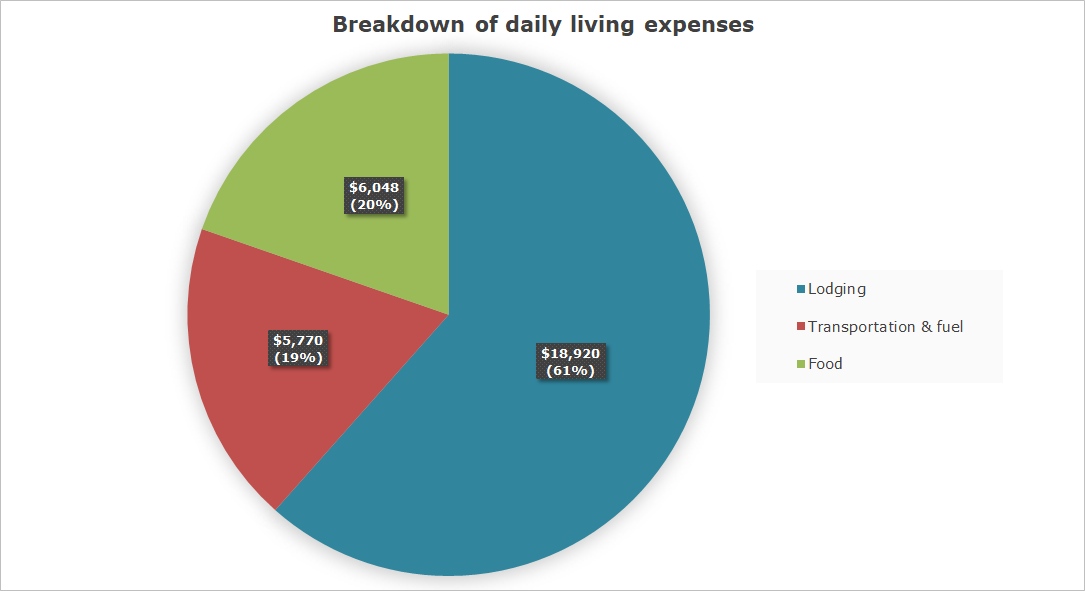 Where did we spend the most money during our year overseas?

Not surprisingly, just under half of our budget (40%) was spent on living accommodations. We were pretty consistent in other categories, spending roughly equivalent amounts on local transportation, food, and activities (12%, 13%, and 14%, respectively). 19% of our budget was spent on international transportation, and we spent a trivial amount of money (<1%) on ‘miscellaneous’ expenses – mailing postcards and packages home, and purchasing a couple of small souvenirs (though coming home with a dog is story for a different day). 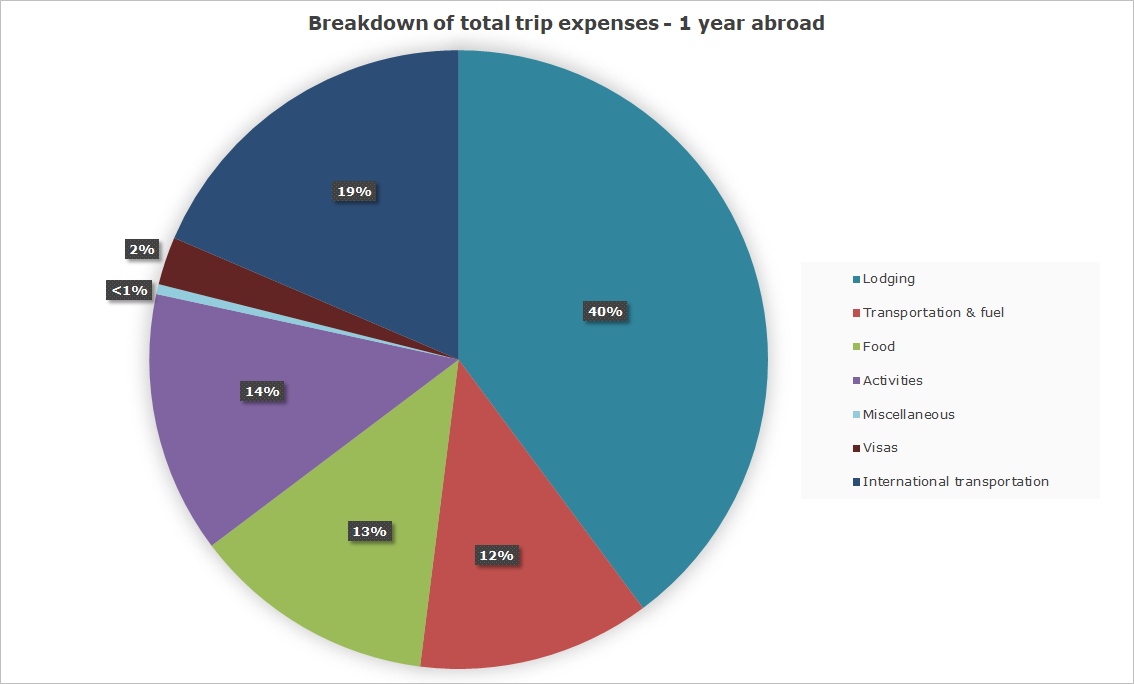 And just because there may be some fellow numbers geeks out there, here are few less relevant (but equally fun) figures from our year on the road:

Worst deal: Russian transit visits… and we weren’t even granted the full 10 days – $308/each 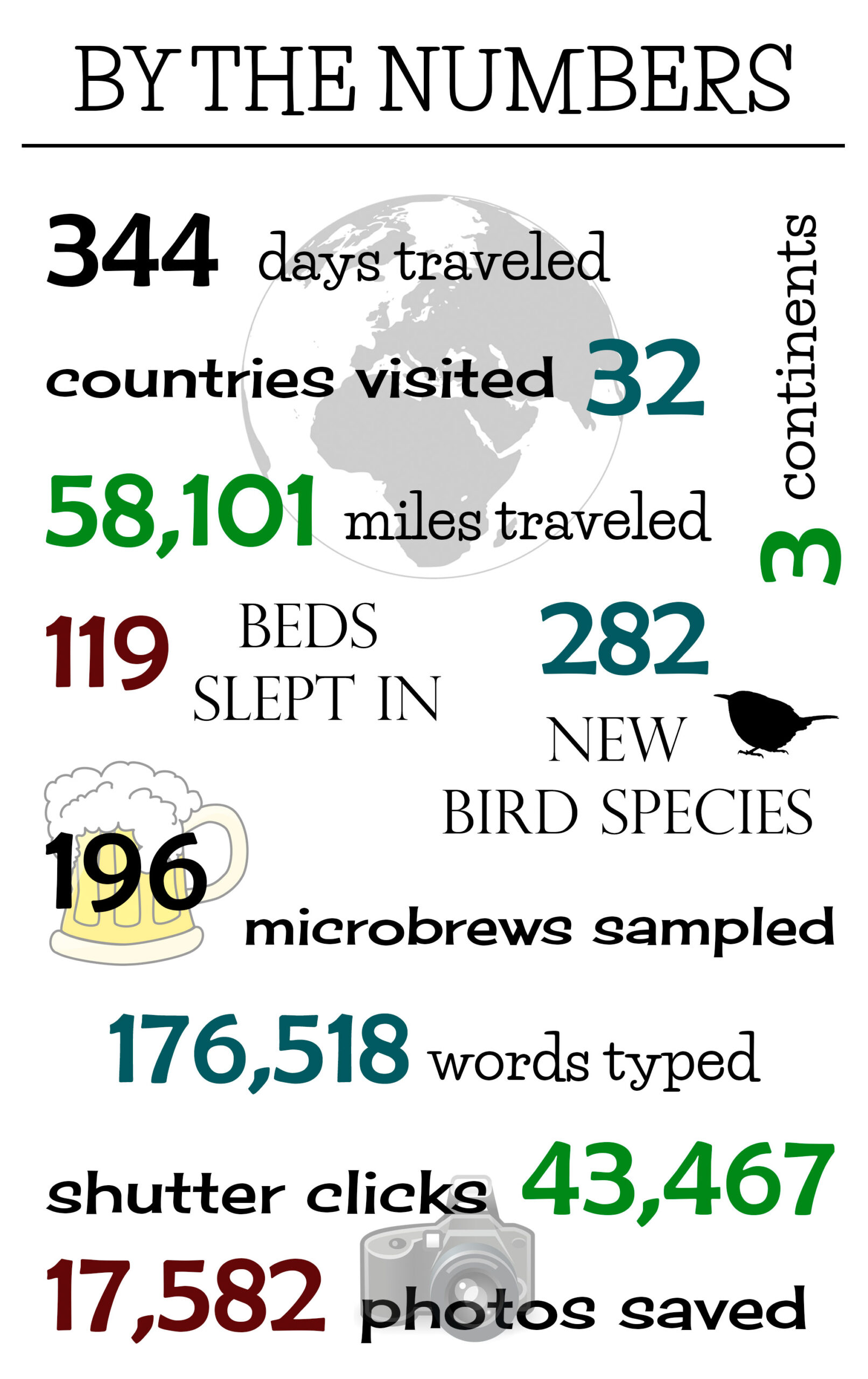 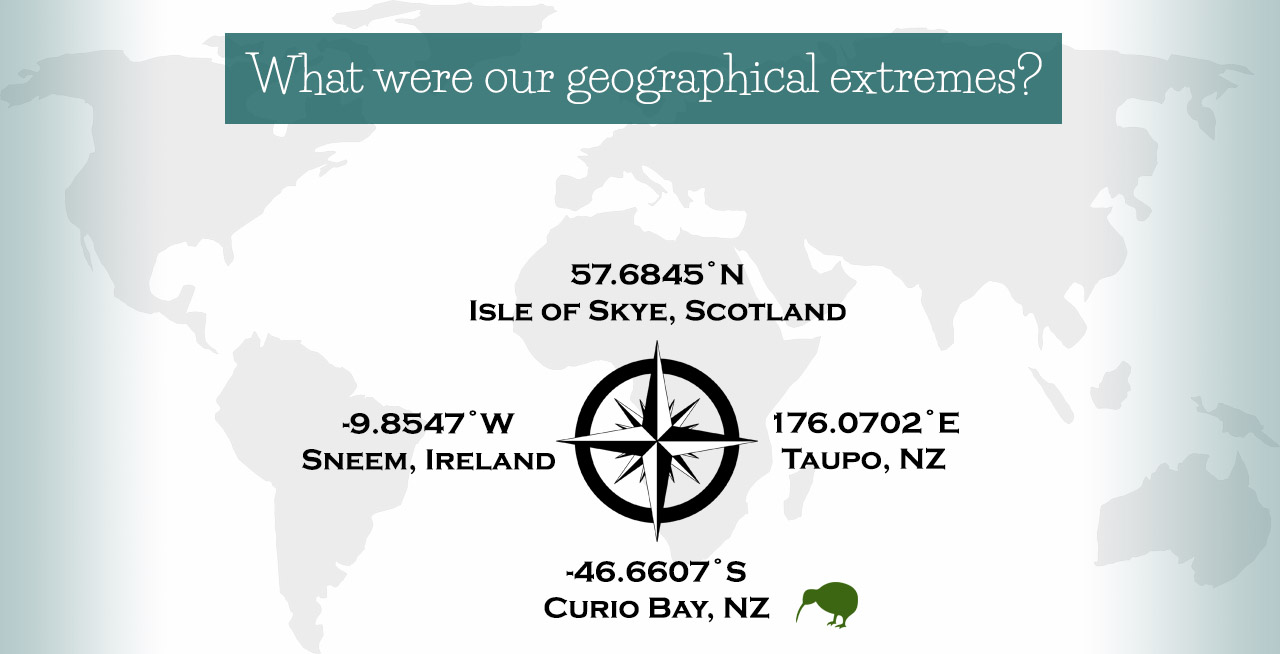 If you’ve always dreamed of packing up conventional life for a while and making the leap to spend one month or one year exploring this great world, we hope this shows that with a bit of savvy saving and mindful budgeting, the world can be your oyster!