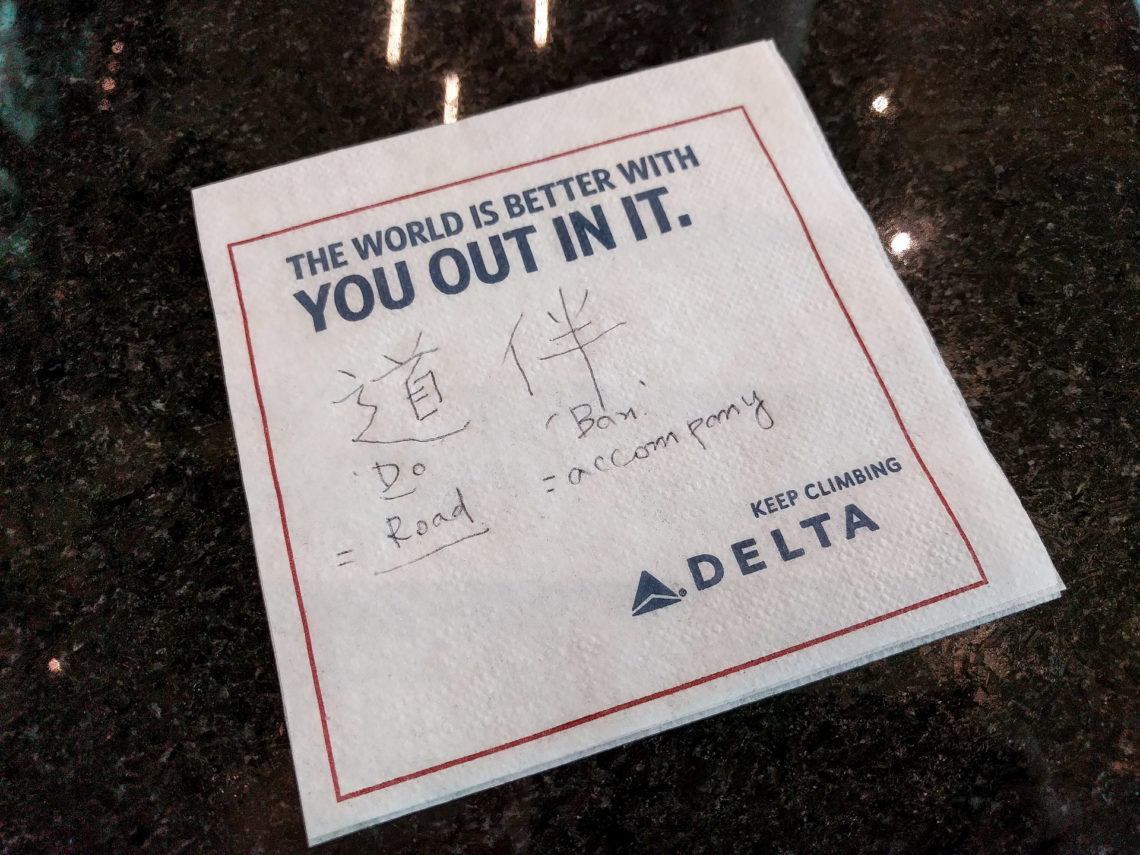 Nelson Mandela once professed, ‘I learned that courage was not the absence of fear, but the triumph over it. The brave man is not he who does not feel afraid, but he who conquers that fear.’

As someone who spends countless hours struggling to overcome fear, Mandela’s creed resonated strongly with me.

Traveling is one of my greatest passions. Unfortunately, though, this love of exploring is irreversibly coupled with a deep-seated fear of flying. I have to admit, it’s really difficult when a pursuit that brings you so much joy is handcuffed to something that concurrently elicits so much anxiety. I’m regularly asked how I’ve managed to travel to some forty countries if I’m afraid to fly. I typically respond that I have no friggin’ idea. Sometimes, I don’t. When I really think about it, though, I guess it all comes down to a single condition – I can either give up my passion and give in to fear, or I can try my best to suck it up. While it’s never easy – and probably never will be – I’ve always chosen the latter, attempting to convince myself that each panic-inducing experience in an airplane is ‘character building.’ And although I have not yet lived up to Mandela’s ideal of conquering that fear, I do try to muddle through it.

Back in 2016, we visited Chiang Mai’s Elephant Nature Park for a volunteer stint with rescued Asian elephants, and ended up impulsively adopting our loving little mutt, Sanchez, from the associated dog rescue. For the past six or eight months, I’ve been longing to return to Thailand to volunteer at the dog sanctuary. For a lot of people, the decision would be easy. If you want to go to Thailand and you have the means to go to Thailand, then go to Thailand. But for me, it’s just not that easy when getting there requires nearly 24 hours of actual flight time. Consequently, for the past six or eight months, I’ve woken up nearly every night from a dead sleep, convincing myself that I wasn’t strong enough to do it, and subsequently feeling defeated that I was such a coward.

Finally, the week before my birthday – after failing to procure yet another research scientist position – I booked a flight that departed merely three weeks later… my first solo, international trip. That night a kind of peace came over me, and I slept the best I had in months. Of course, that serenity was short-lived, and about two weeks later the thought of 22 hours of flight time – including a 12-hour Seattle to Seoul leg – crept back into the forefront of my thoughts and rekindled all that late-night anxiety. For the 48 hours or so before my departure, I was an absolute mess… quite reminiscent of my pre-Auckland-flight self. Somehow, though, I managed to make it out the door at 4 a.m. the morning of my flight, weeping and popping Pepto-Bismol like candy.

After completing leg one and arriving in cloud-covered Seattle, I waited anxiously at gate S10 to board the flight to Seoul. I thought to myself, ‘Seriously? This was a super shitty idea. I suppose I still have time to just turn around and go home.’ But something pushed me forward. Maybe it was a sliver of courage, maybe it was a moment of delirium from lack of sleep, but I somehow forced myself down a jetway that felt like an inmate marching the green mile. As I took my seat in 34A, I glanced around at how shockingly little space I had. At a petite 5’3”, I’m never one to complain about lack of leg room, but this was exceedingly claustrophobic – ostensibly more cramped than the little CRJs I’m used to flying from Raleigh to Boston. ‘There is no way I am going to make it 12 hours,’ I instantly fretted.

Minutes later, a kind-looking Korean gentleman in a gray sport coat and red and blue checked button-up shirt took the seat beside me. He was in his mid- to late-50s, and smiled with kind eyes as he scooted down into his confined, center slot. His English was fairly good, and he immediately began asking about my travels. I learned that he’d make the onerous trip from his home in Korea to Seattle just four days prior to attend his sister’s funeral. She’d immigrated to the U.S. thirty years ago and died suddenly from lung cancer. I in shared that I was from NC and was headed to Thailand to work at a dog rescue. His eyes widened with astonishment and he shook his head. ‘How many hours you travel?!’ he gasped. ‘You travel all the way to Thailand for dogs?! Are these special dogs?’ he continued in disbelief. I chuckled that they were, indeed, pretty special, then whipped out my cell phone photos and amused him with Sanchez’ adoption story. I went on to explain that she was part Korean Jindo, and he was immediately impressed, having some knowledge of the breed. He reminisced that his sister loved dogs, and that she was regrettably leaving behind her two beloved senior pups. ‘I can learn from you,’ the gentleman finally finished. ‘You have great patience to do this.’

Over the course of the trip, my kind seatmate continued to regale me with stories – from his year in the U.S. for a CPA internship to his three years in Kazakhstan where he studied Asian antiquities. An enthusiast of Asian history and languages, he walked me through centuries of linguistic evolution and even gave me an introduction to understanding Chinese characters, of which he has learned ‘three to four thousand.’ We chatted and laughed intermittently throughout the flight and by the time we touched down in Seoul, I felt like he was an old friend.

Toward the end of the flight, he turned to me and told me that my smile made him feel comfortable, and that he was happy to have someone to talk to. Pulling a pen from his shirt pocket, he scribbled two Chinese characters on his Delta drink napkin. He handed me the napkin, explaining the first symbol meant ‘road,’ and the second ‘accompany,’ ultimately thanking me for being his ‘do ban,’ or travel companion. For me, this is one of the greatest parts of travel – no matter how quickly someone enters and exits your life, you meet people who somehow change your world forever.

And while my smile may have made him feel at ease in striking up a conversation in his non-native language, he’ll never know just what his kindness did for me on that arduous long-haul flight. I’m not sure what I would have done without a do ban for those 12 grueling hours. To the man in seat 34B, gamsahamnida… I am forever grateful. 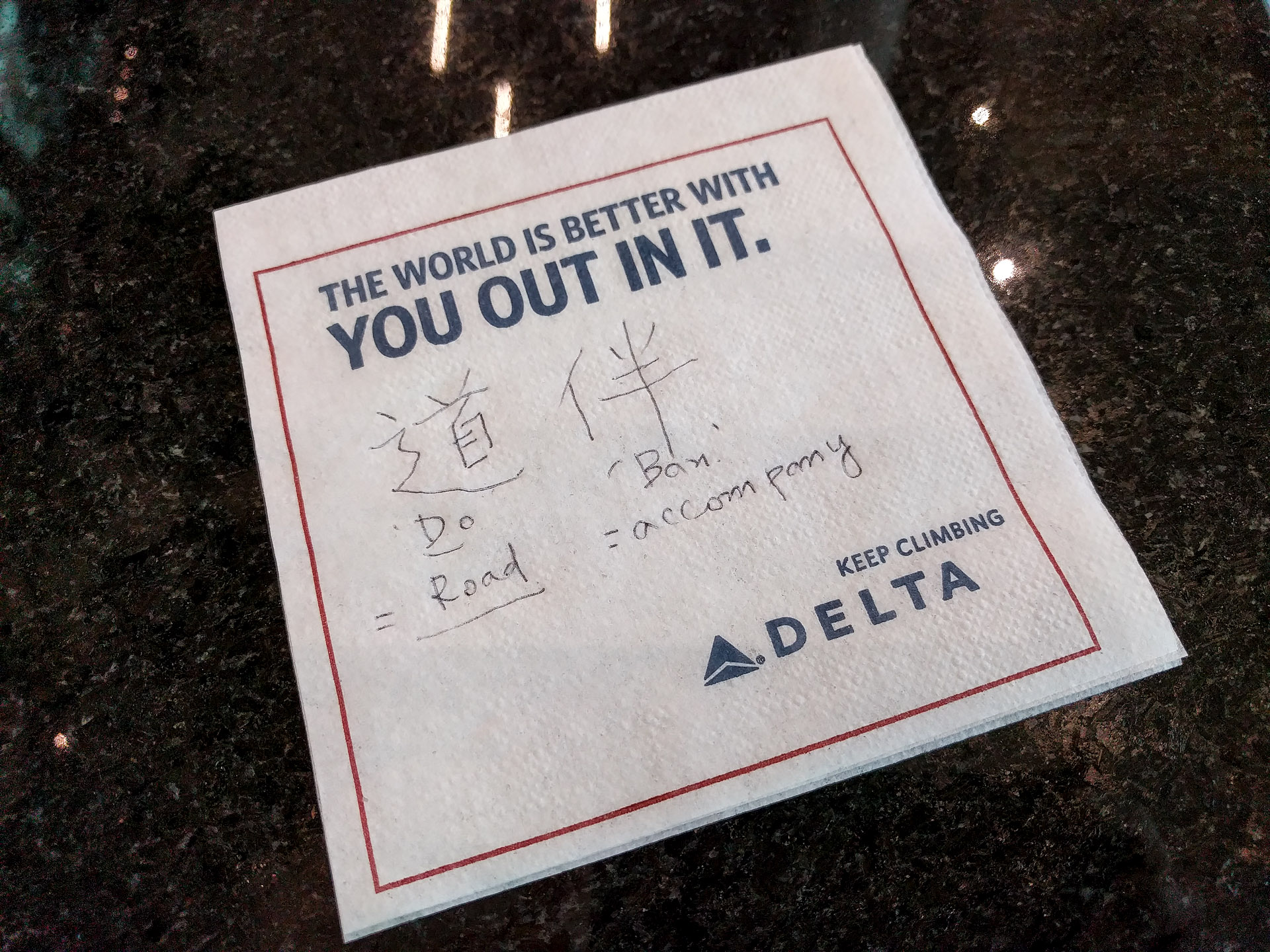