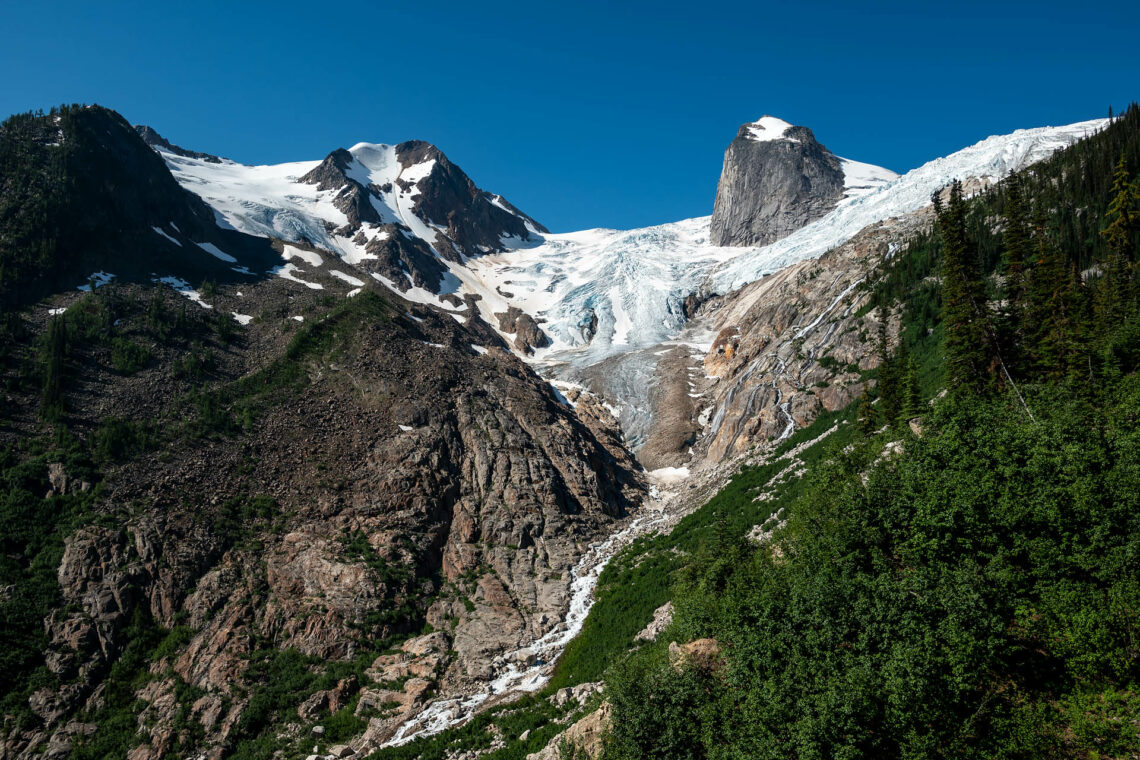 Located in British Columbia’s Purcell Mountains, Bugaboo Provincial Park encompasses a remote swath of glaciated, alpine wilderness. Here, you’ll find a collection of towering granite spires that erupt from a mantle of massive glaciers. With many of the chiseled peaks exceeding 3,000 meters in elevation, it’s a super popular spot for climbing and the terrain is seriously rugged.

Compared to the accessibility of the nearby national parks, getting to the Bugaboos takes a bit more effort. The isolated spot is about 70 miles (115 km) south of Golden, and the park’s two main trailheads (Conrad Kain Hut and Cobalt Lake) lay fifty kilometers up a dirt road. Because it’s much more off the beaten path, facilities and cell phone reception are basically non-existent.

The trail to Applebee Dome begins from the Conrad Kain Hut Trailhead, at the terminus of the dead-end road. However, a bit of extra work is required after arriving at the trailhead. Instead of just slapping on some sunscreen and bug spray, you need to perform one of the stranger pre-hike rituals we’ve encountered – wrapping your car in chicken wire. Apparently, the Bugaboos’ resident porcupines have a notorious reputation for chewing through rubber brake lines. If you visit, particularly if you’re camping overnight, the park advises that you secure your vehicle’s undercarriage with a perimeter of fencing to ensure your brakes are still functional when you go to leave. When you arrive at the remote trailhead, you’ll find that the park even provides two large bins of communal supplies to help protect your ride from the impish little critters. 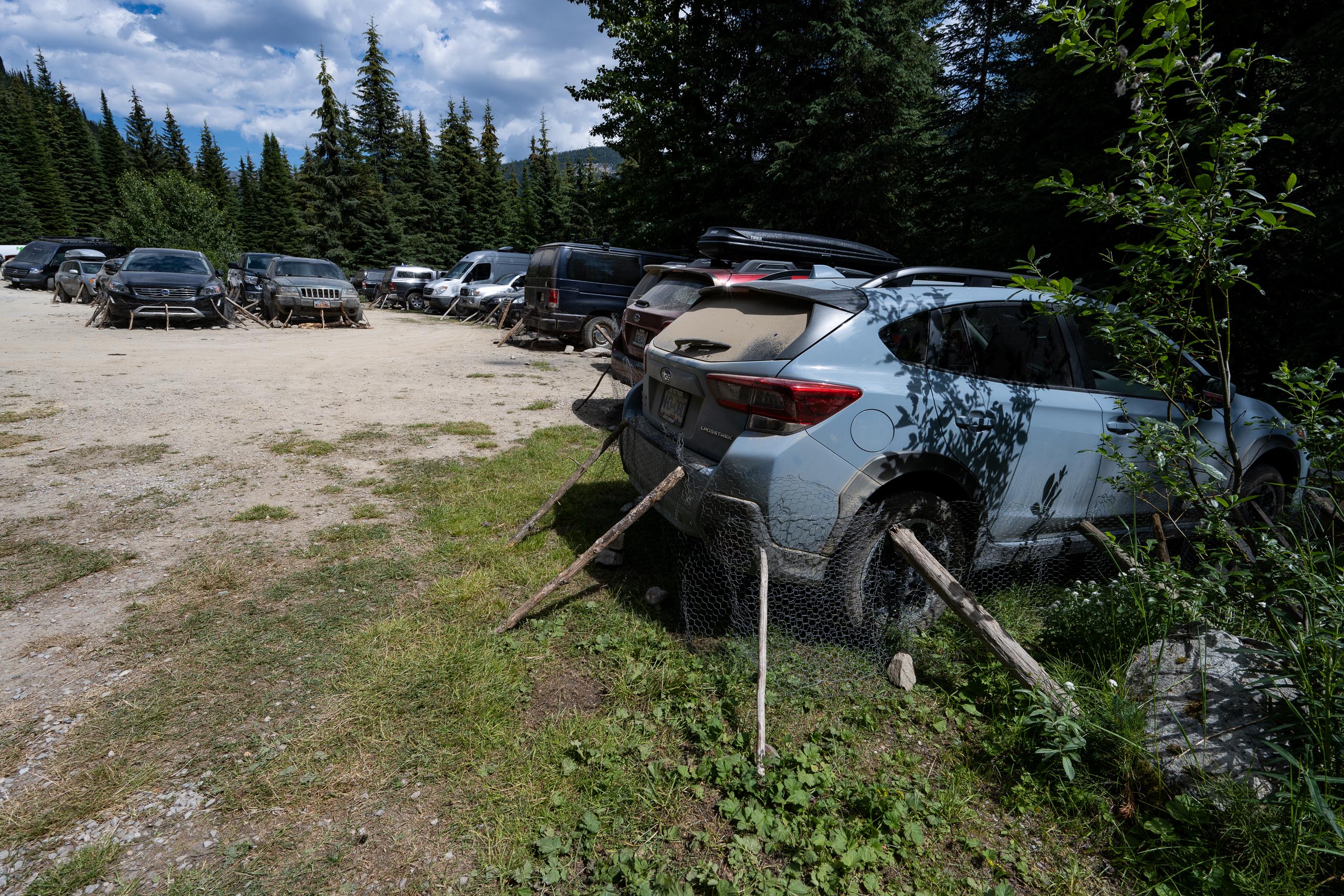 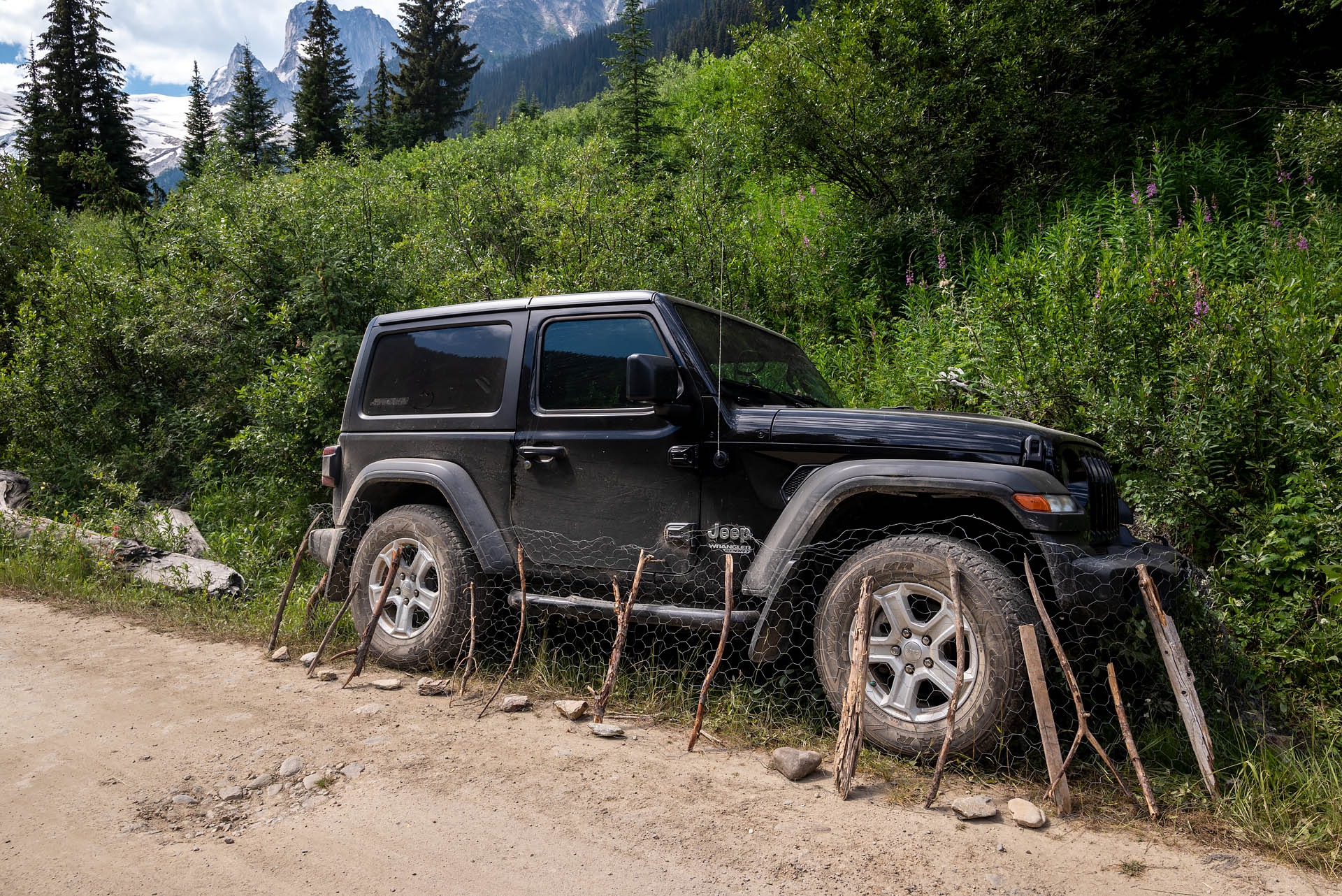 Once you’ve driven out to the middle of nowhere and wrapped your car up like some type of eccentric Christmas gift, you can finally hit the trail. The trip up to Applebee Dome is a mere six and a half miles, however it’s one of the more aggressive short trails we’ve done. While the punishing 31C (90F) temps and relentless sun may have played a role in our surprising end-of-hike fatigue, the terrain here is for sure rugged.

Perhaps more surprising is that a third of the hike is actually quite flat. The first mile of trail climbs gently through coniferous forest until it opens up onto an exposed, boulder-strewn landscape. After that, the path steepens quickly, gaining more than 3,200 feet (975 m) of vertical over two-ish miles (3 km) as it follows the northern moraine of Bugaboo Glacier. It’s a pretty decent grade and there’s a bit of exposure as it climbs a series of granite bluffs – including a 25-foot (8-meter) ladder and short section of chains that are there to give an assist if needed. Regrettably, the ladder was the one impediment that precluded Sanchez from joining us for this outing (something to keep in mind if you’re considering bringing your pup). She would have had a blast scrambling up all that rock. 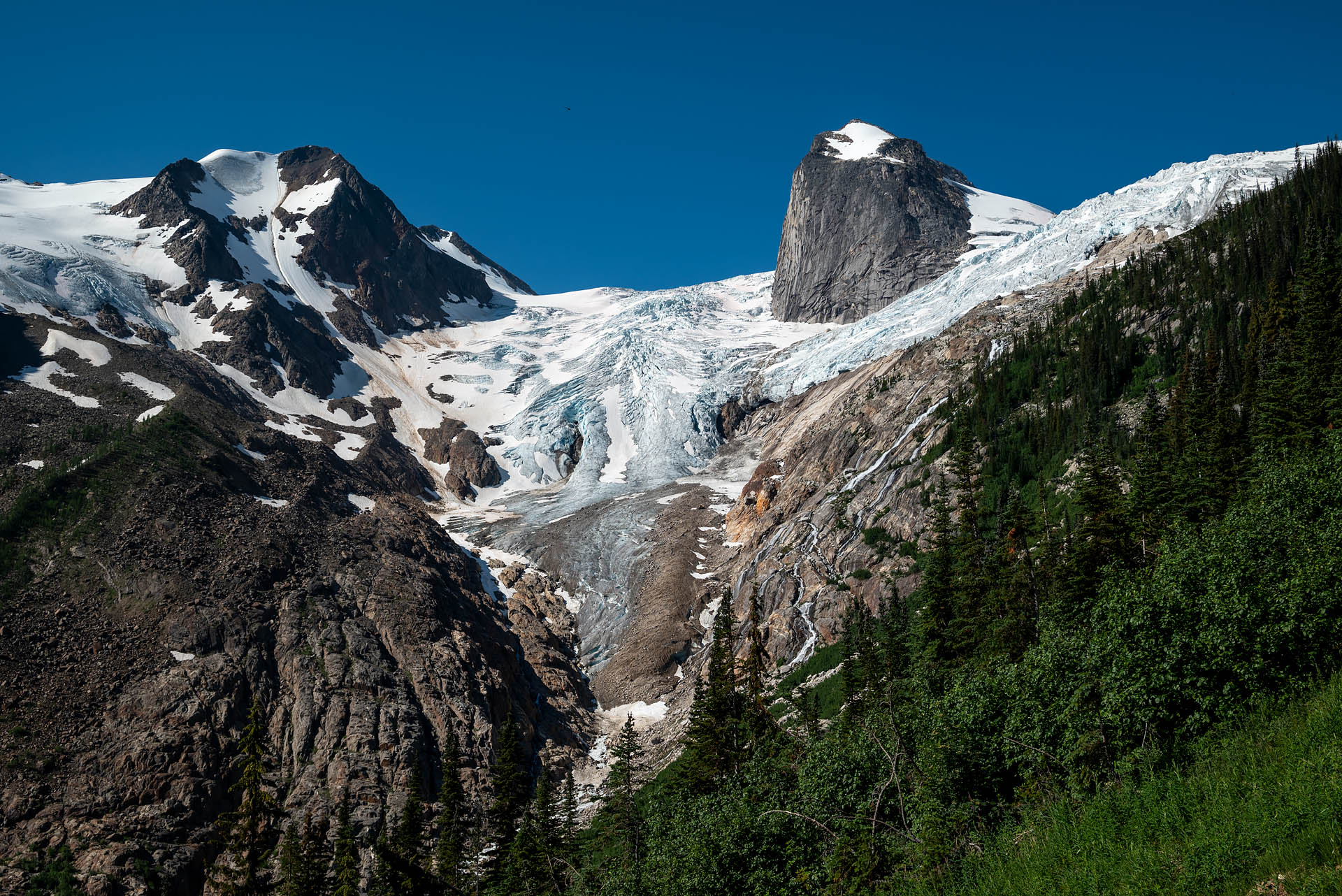 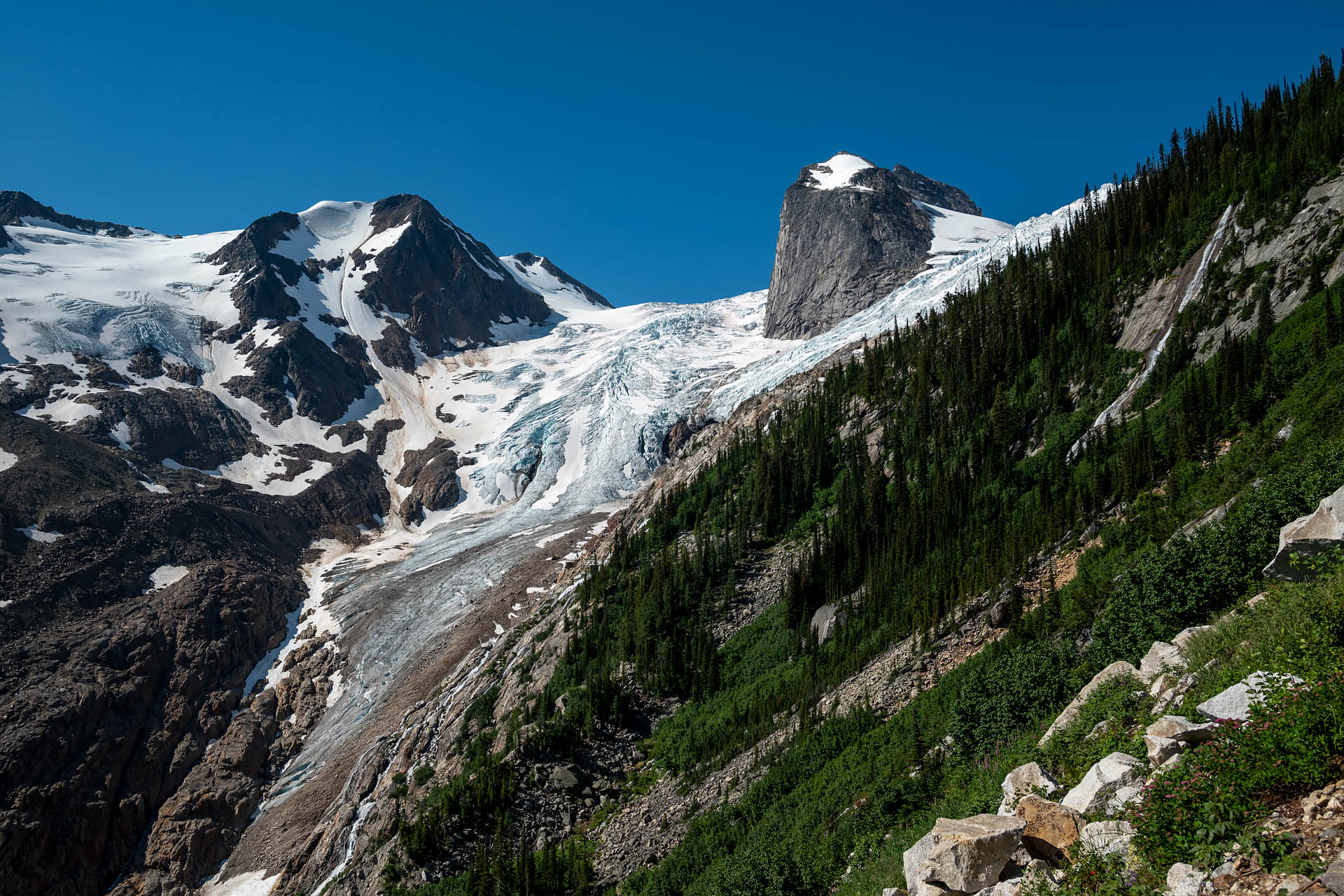 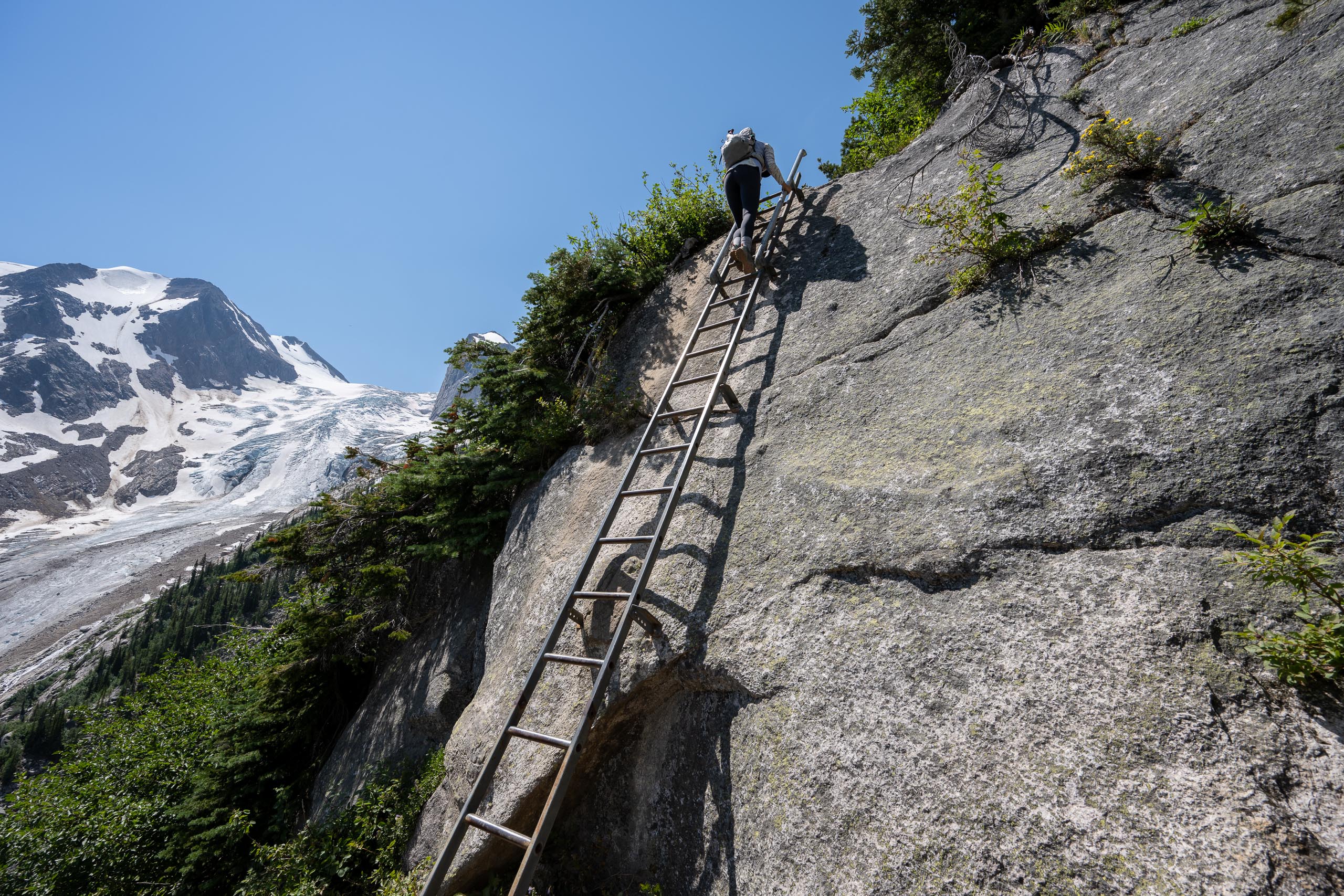 About two and a half miles (4 km) from the trailhead, the track reaches the Conrad Kain Hut. One of about thirty backcountry shelters run by the ACC (Alpine Club of Canada), this cabin was named in honor of trailblazing mountaineer and alpine guide Conrad Kain. After immigrating to Canada from Austria in 1909, Kain made dozens of pioneering climbs in the Purcell Mountains and all over British Columbia. His early 20th century feats included the first ascent of Mt. Robson, the highest point in the Canadian Rockies, as well as conquering Bugaboo Spire, which was considered one of the most difficult climbs in Canada until the advent of rock climbing gear in the 1940s. Perched amongst furrowed glaciers and far-flung peaks, the bow roof cabin is one of the most enchanting alpine huts we’ve seen. 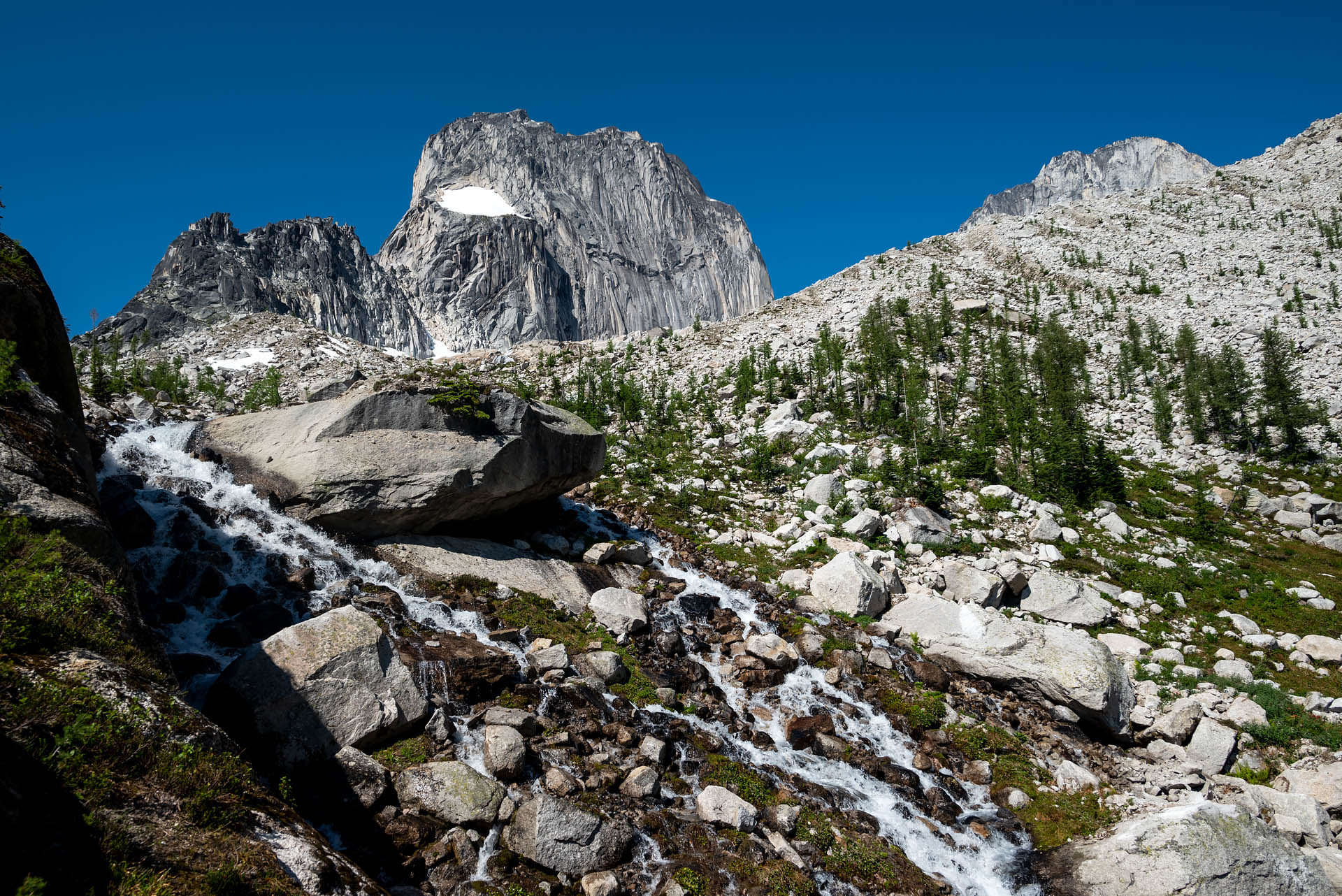 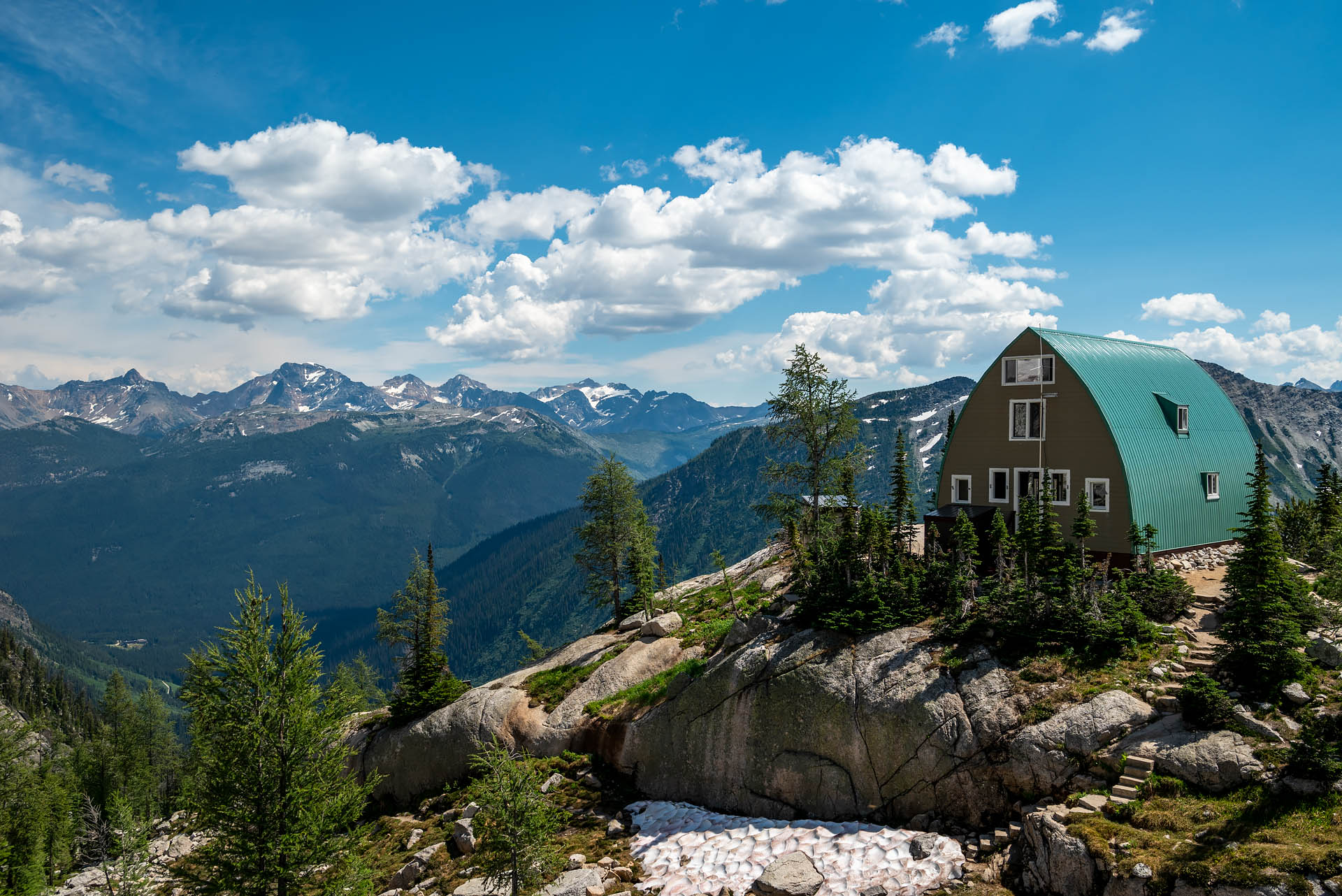 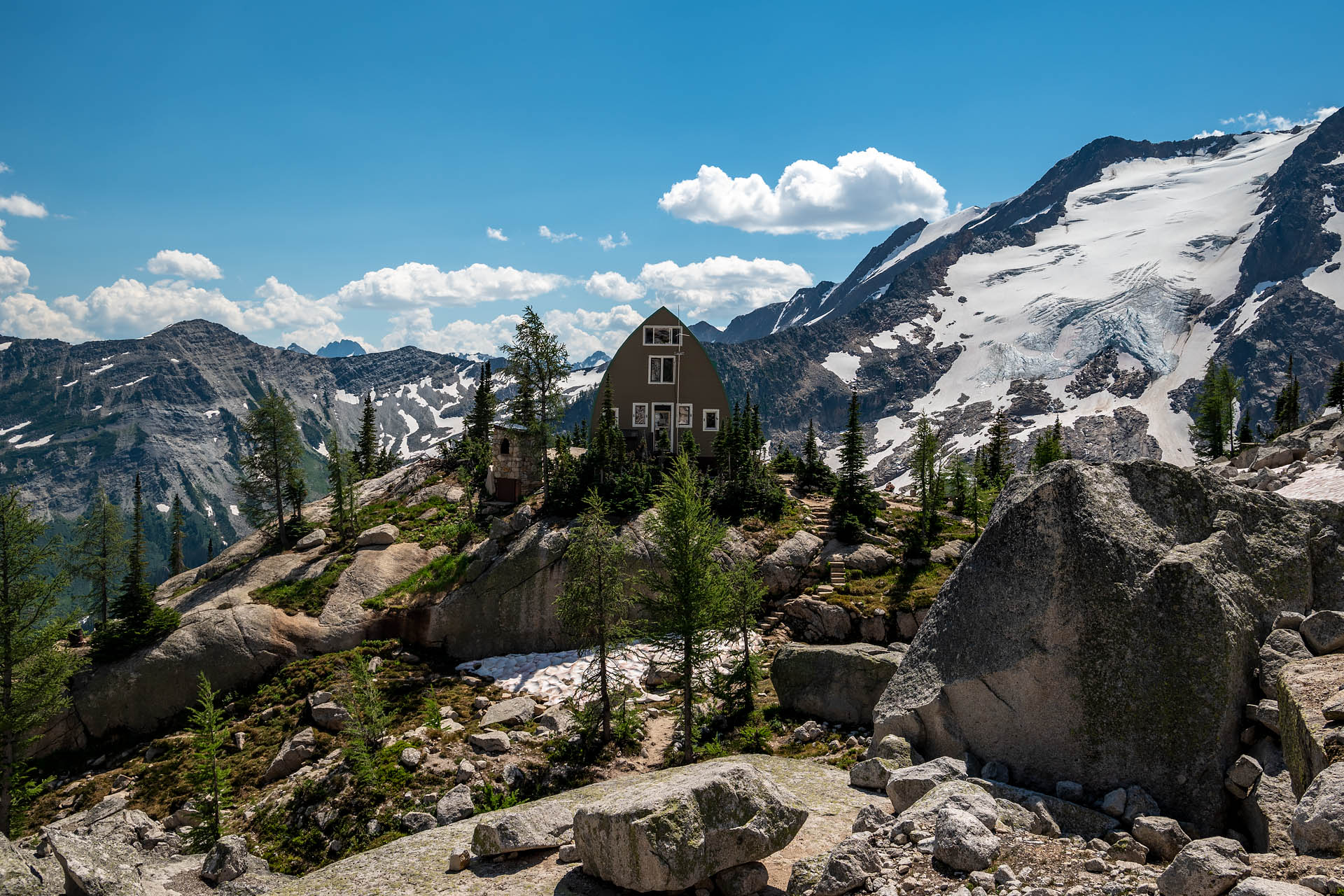 From the Conrad Kain Hut, the trail continues climbing steeply for another mile until it reaches Applebee Campground. The sprawling space atop Applebee Dome’s flat, granite expanse is surrounded by soaring, glacier-sculpted spires. From south to north, the Hound’s Tooth/Marmalota massif and Snowpatch, Bugaboo, Crescent and Eastpost Spires encircle Applebee’s comparatively modest 8,150-foot (2,485-m) highpoint. Aptly named and, perhaps, the most striking, Hound’s Tooth erupts like a giant incisor from the center of Bugaboo Glacier. 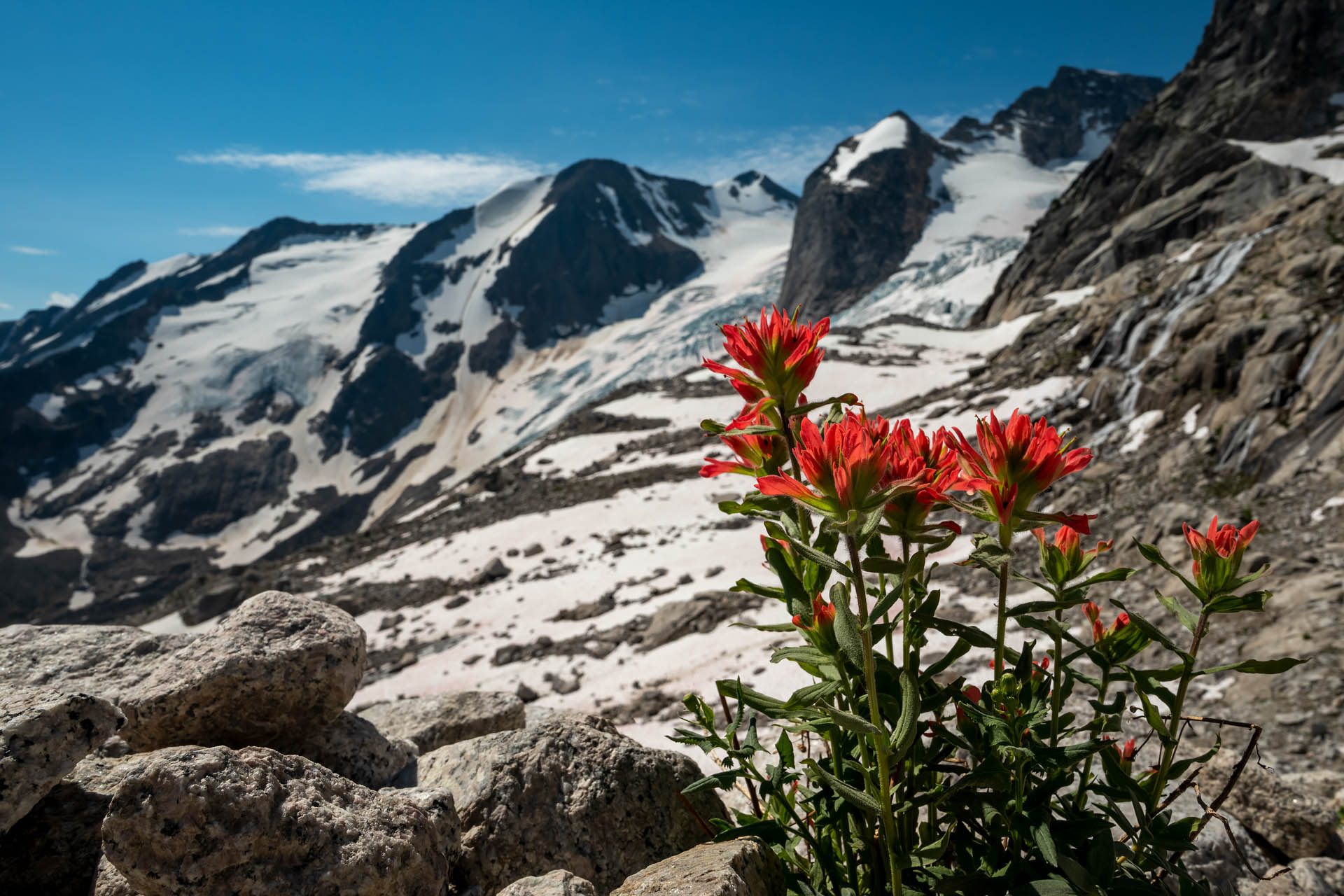 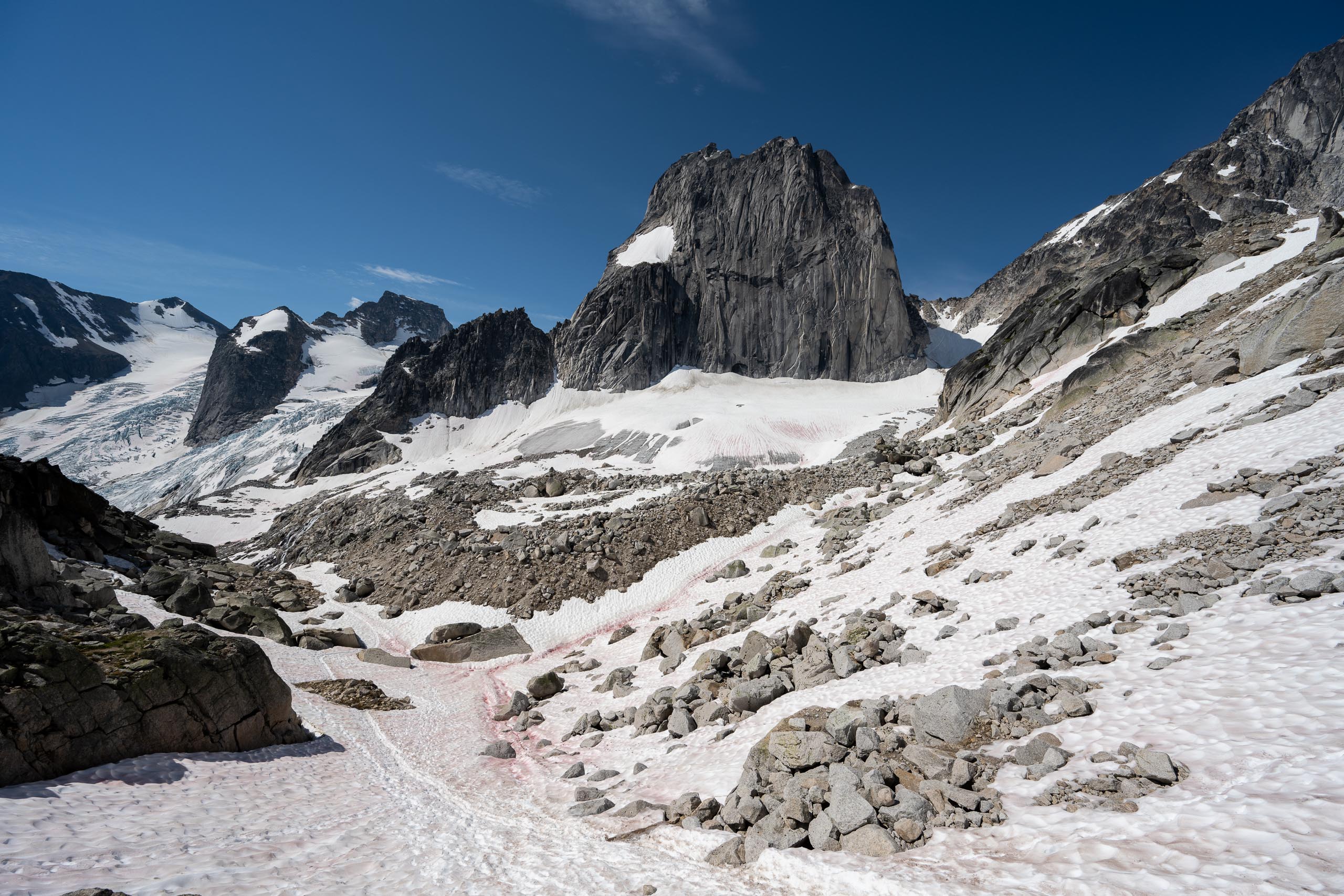 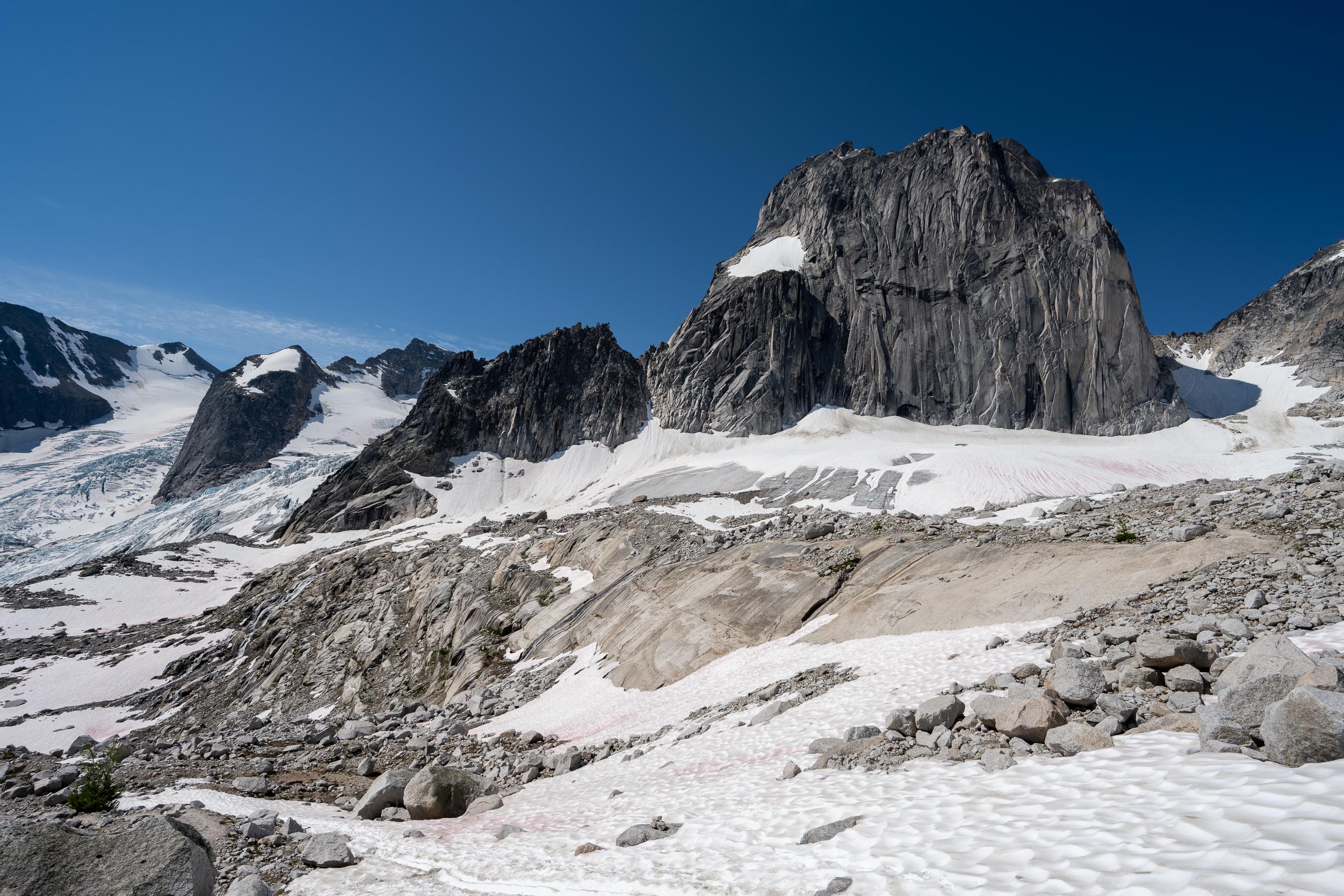 While Bugaboo Glacier looks pretty impressive today, it was considerably larger a century ago. Since Conrad Kain’s first visit in 1910, the glacier has retreated more than 2 km, having once flowed down completely down the mountainside and filled the entire valley. Today, the conspicuous glacier hugs the base of Snowpatch Spire and stretches for 3.5 km, unfurling just below the Conrad Kain Hut. 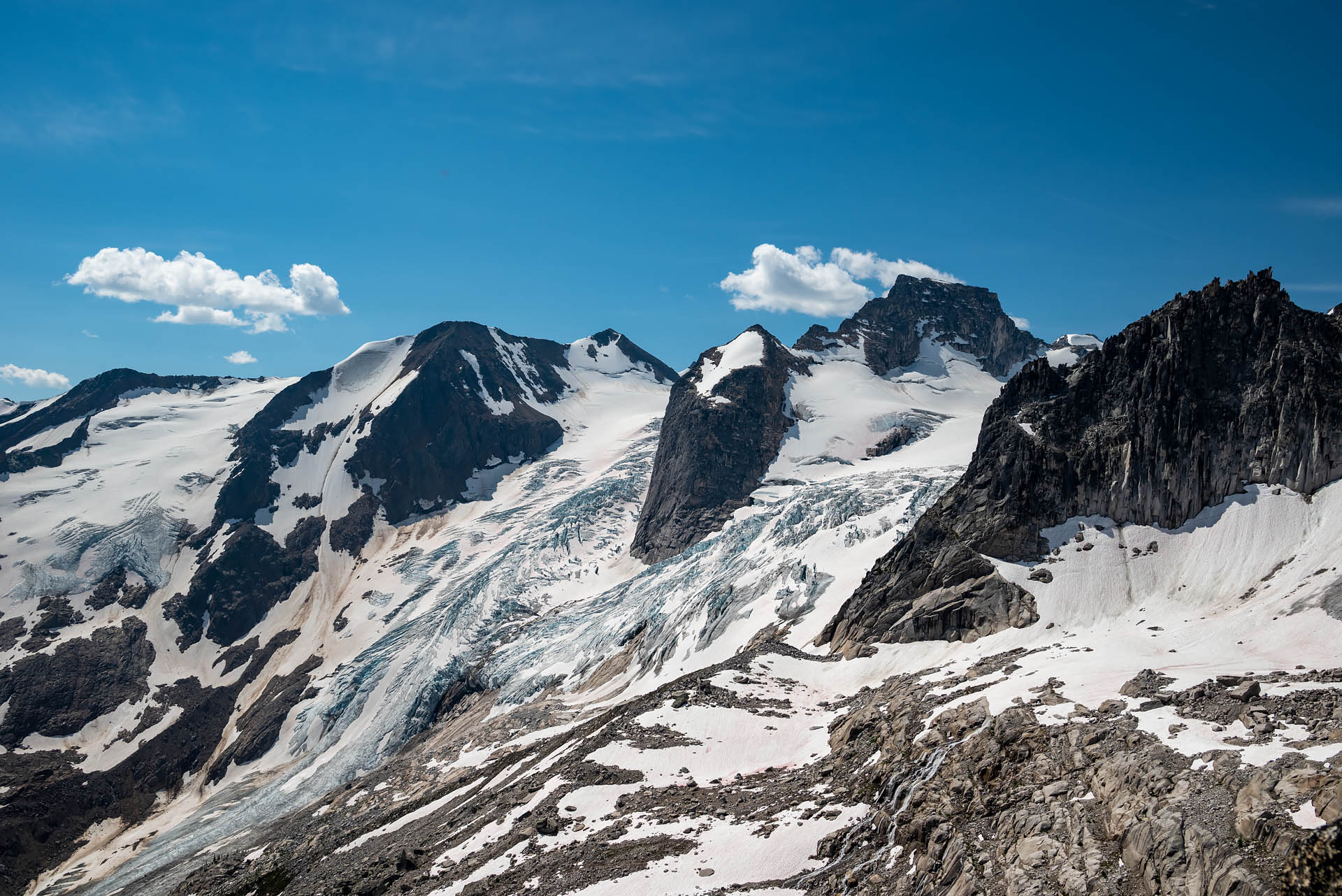 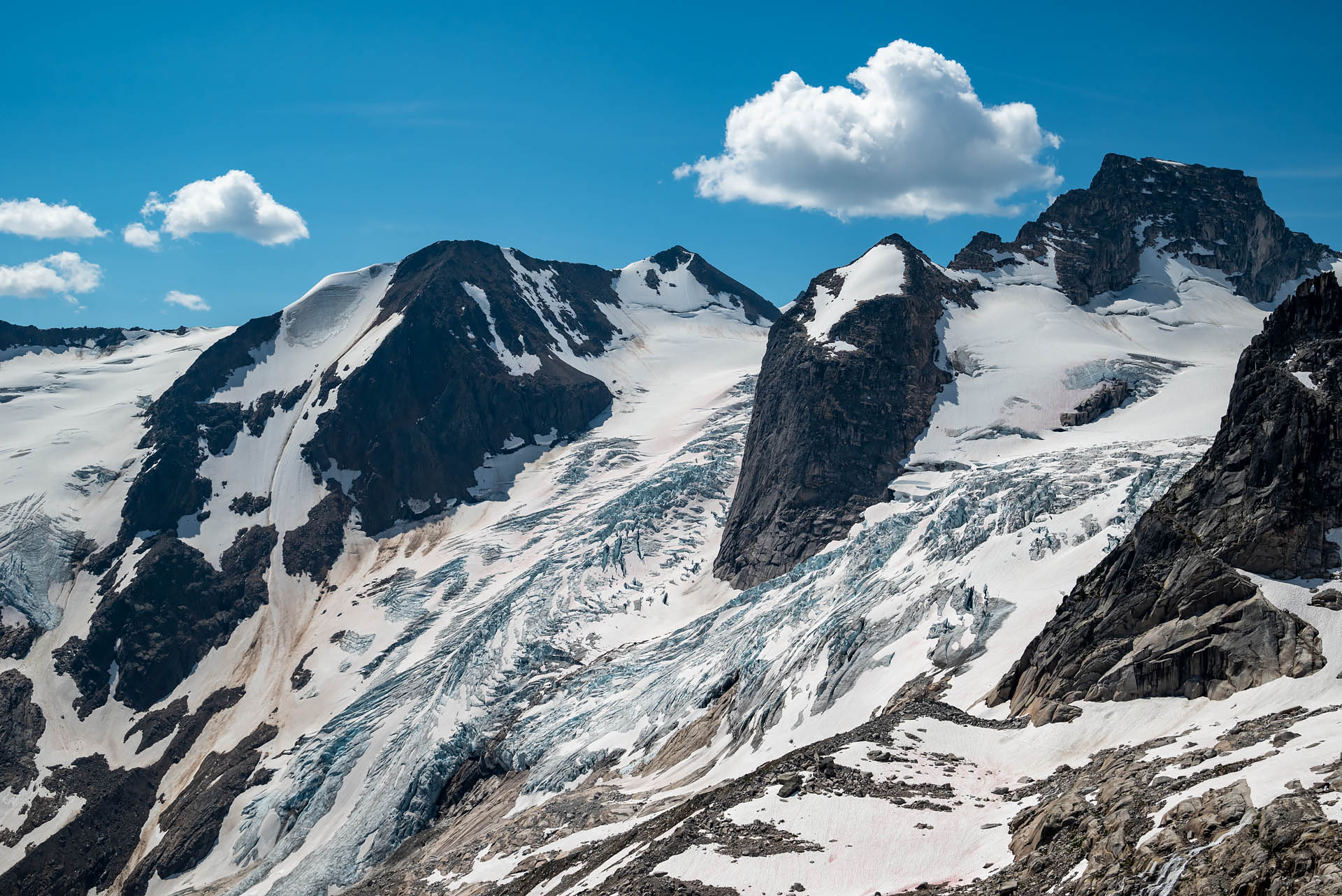 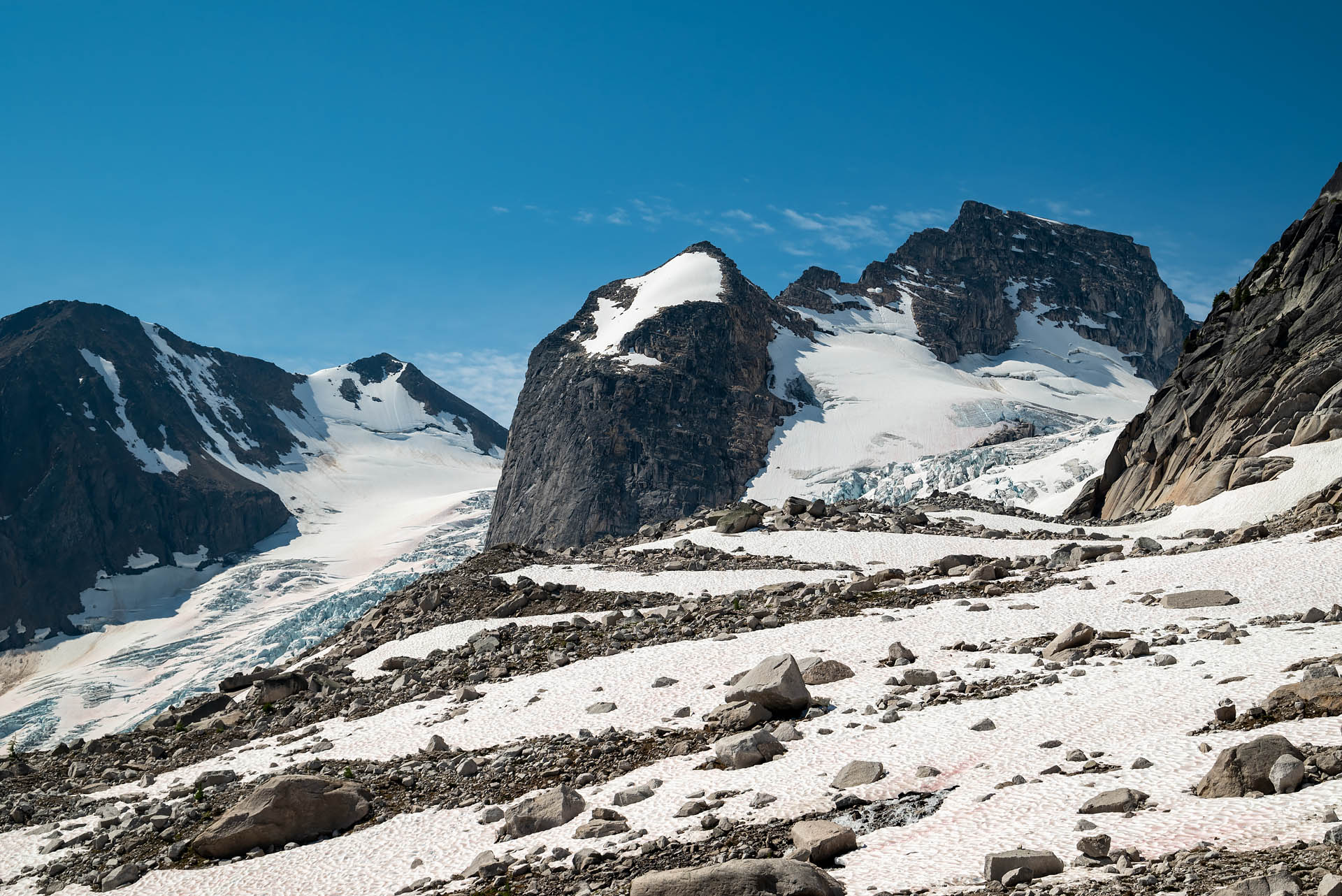 If you’re an experienced hiker (or climber) and want to get off the beaten track a bit, this is a seriously stunning spot. Just keep in mind, while this is a pretty short little day hike, the terrain definitely adds a level of difficulty. Admittedly, Stephan and I felt more wrecked after this hike than we typically do on trails that are three times the distance. We expected our fifteen-miler up Mt. Bourgeau would be our conditioning hike for the weekend, but it turned out it was this little six-and-a-half mile knee burner. 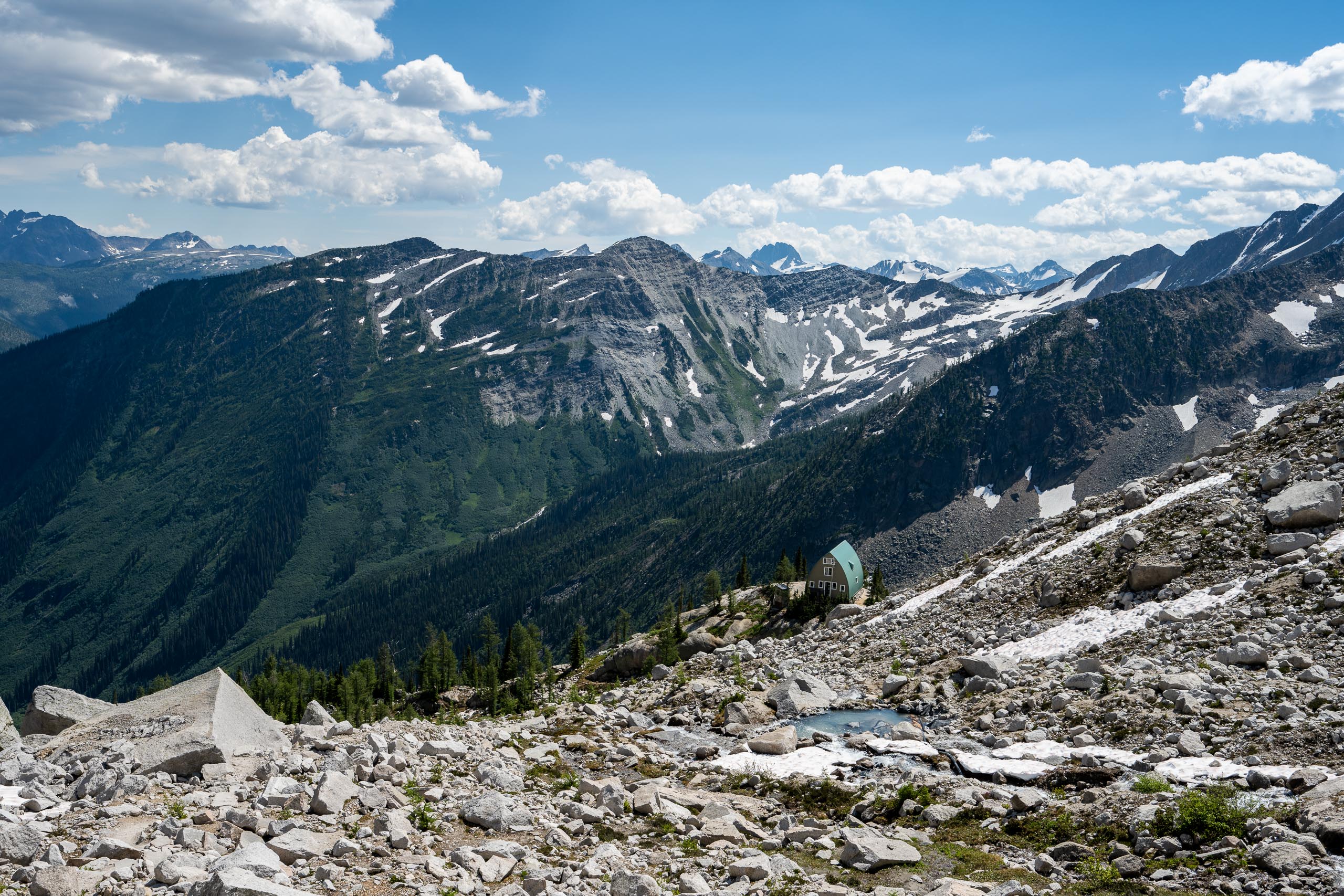 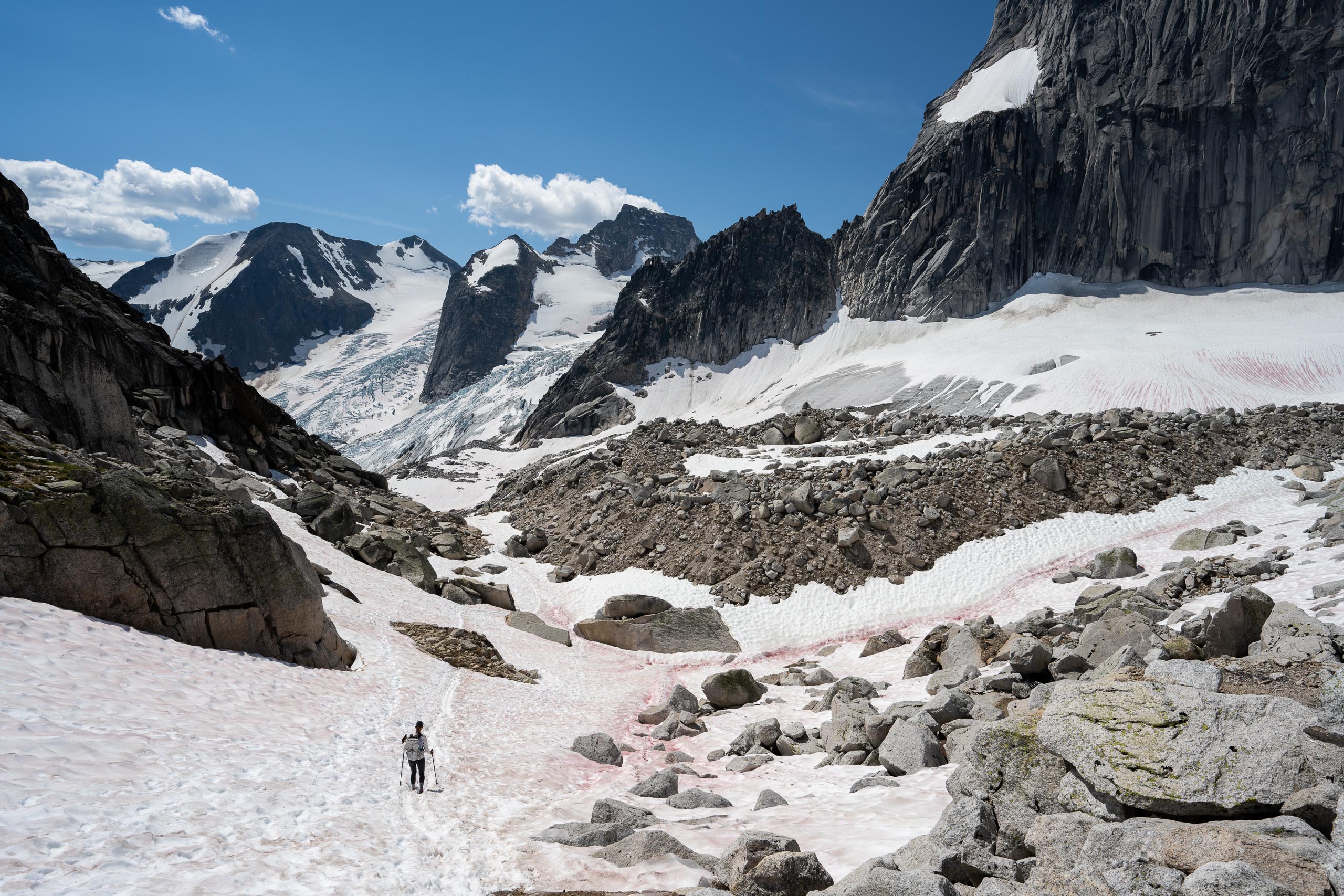 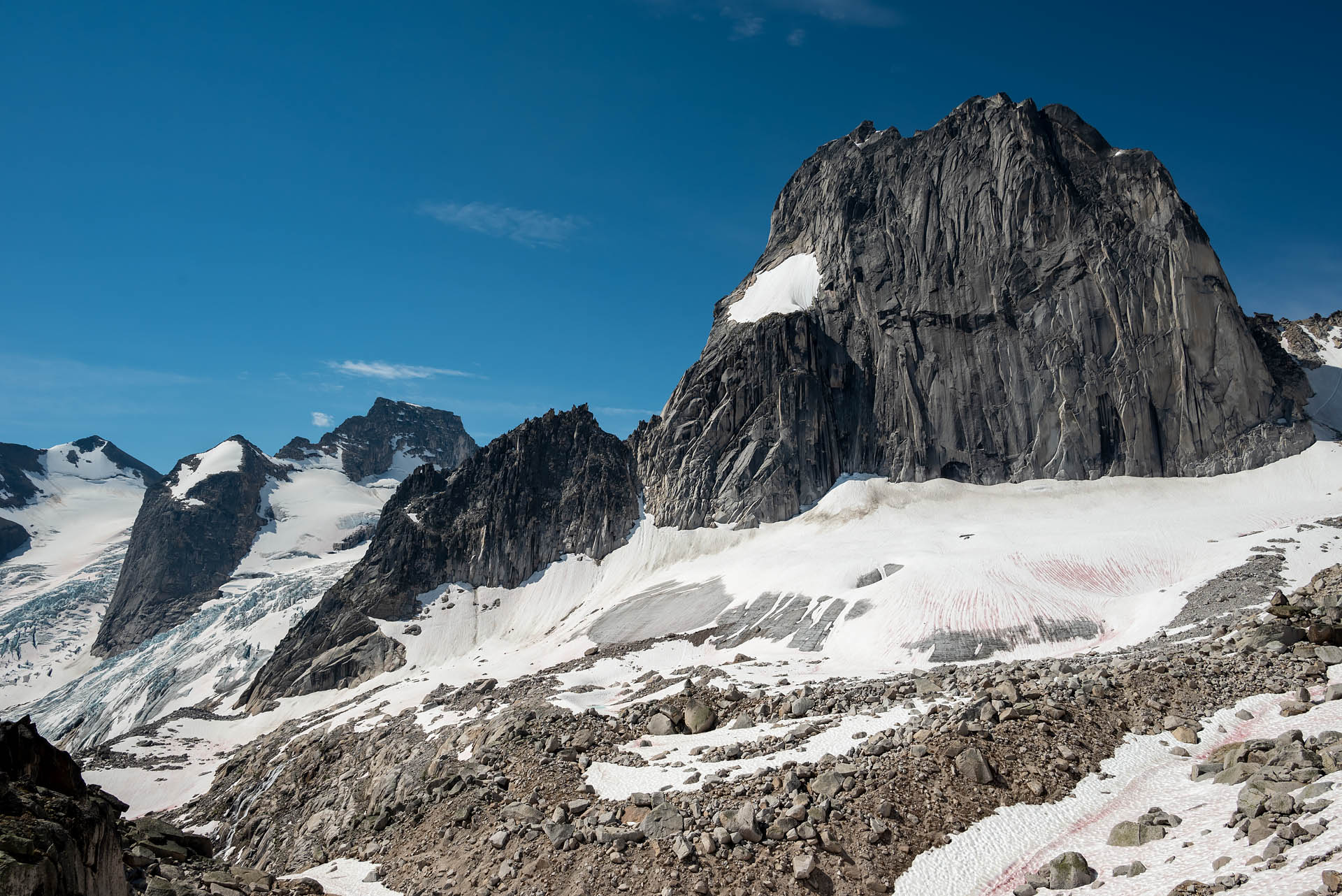 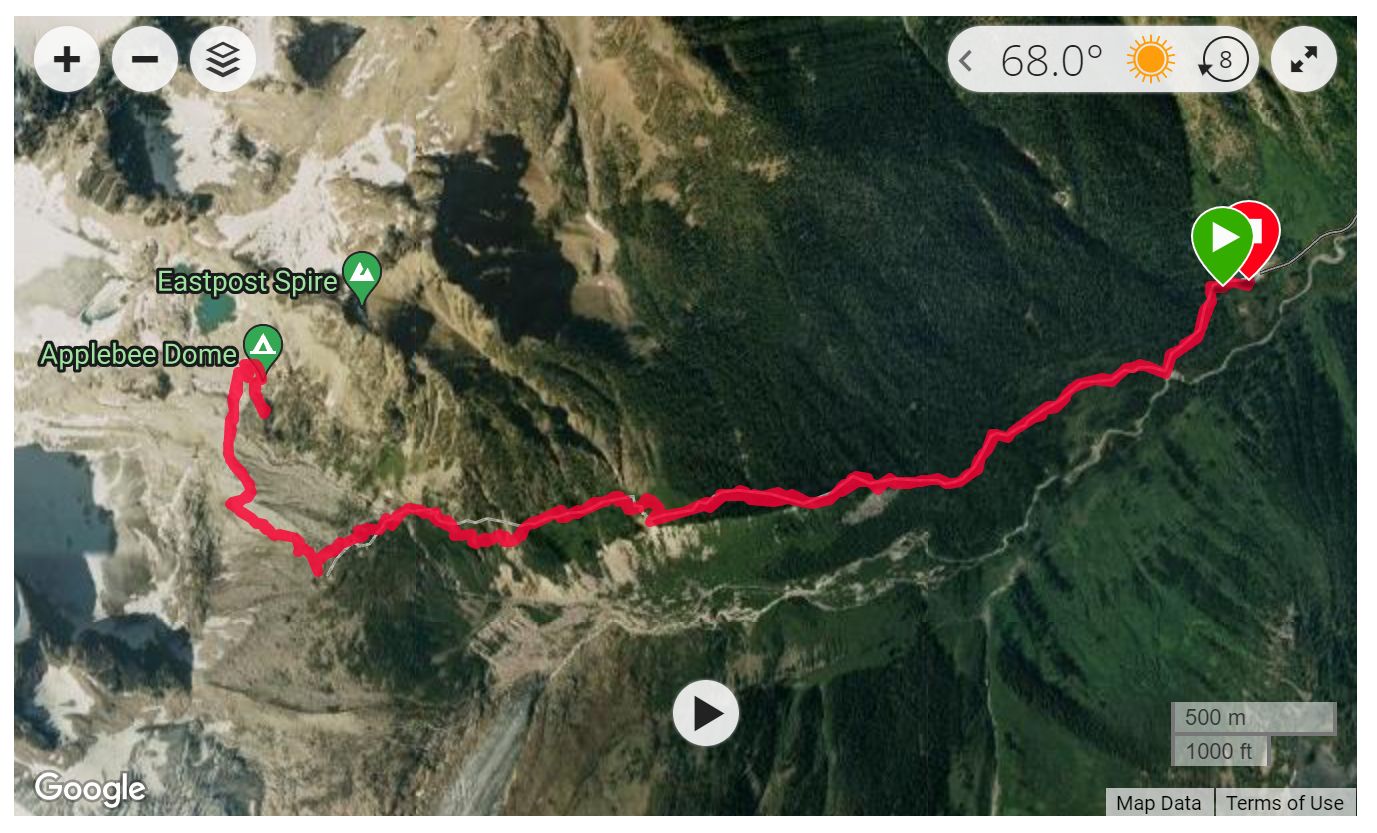