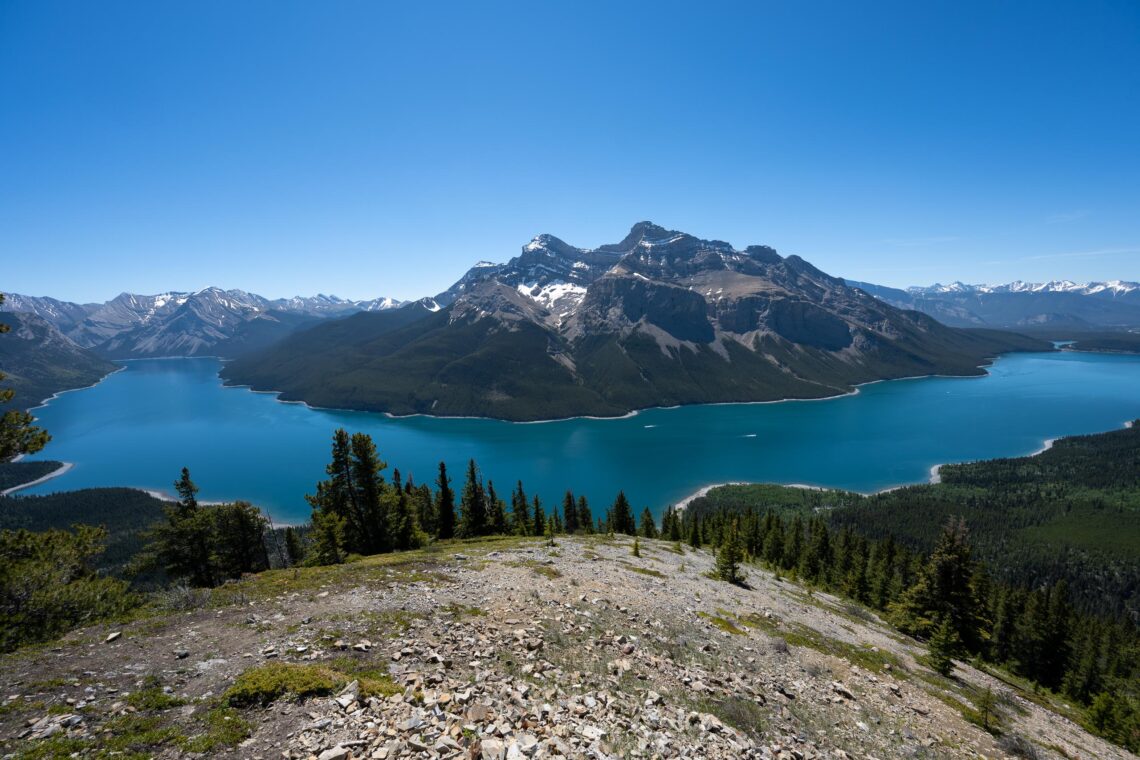 If you’re interested in a hike with a panoramic lake view, I’m not sure it gets much better than Aylmer Lookout. Perched some 2,000 feet (600 m) above Lake Minnewanka, the viewpoint offers a stunning view of Banff National Park’s largest lake. This glacial lake is 13 miles (21 km) long and 466 feet (142 m) deep, and bends beneath the summits of Mt. Girouard, Mt. Inglismaldie, Astley Peak, Mt. Costigan and Saddle Peak. It’s strikingly beautiful and also boasts a captivating history.

The name ‘Minnewanka’ comes from the Stoney (Nakoda) First Nations people, which they dubbed the ‘lake of the spirits.’ Minnewanka has been sacred to local indigenous tribes for thousands of years, with artifacts capturing the lake’s 13,000 years of continuous use.

At the end of the 19th century, shortly after Banff was established as Canada’s first national park, a summer resort village was built along the lakeshore. Minnewanka Landing became a popular holiday destination, and remained as such for decades until construction of the Minnewanka Dam. Built in 1941, during the second World War, the dam raised the lake’s water level by nearly a hundred feet (30 m), completely submerging the once-bustling village. Today, divers flock to the lake to get a glimpse of the underwater ghost town, and many of the original structures remain intact beneath the lake’s crystalline waters.

Just six miles (10 km) from the town of Banff, Lake Minnewanka can be reached by private vehicle or public transit. While there is a large parking lot at the western end of the lake, it fills up very quickly during summer. Parking is free, but a Parks Canada Pass is required to visit the lake. With a host of recreation opportunities – including boating, diving, swimming, camping and hiking – you should plan to arrive by 9 a.m. to secure a spot. Boat tours also operate daily from this side of the lake, so the area around the docks and parking lot can get super congested.

If you want to avoid parking altogether, consider taking the shuttle from Banff. More info on Roam Public Transit (routes, schedules and fares) can be found here. If you choose to drive, take the section of road that passes beside Two Jack Lake. It’s only 2.5 miles (4 km) longer than the western side of the loop, and offers a beautiful view of Mt. Rundle rising above the small lake. Two Jack also has a small picnic area, so you could pause here for a pre-hike breakfast or post-hike lunch/dinner. 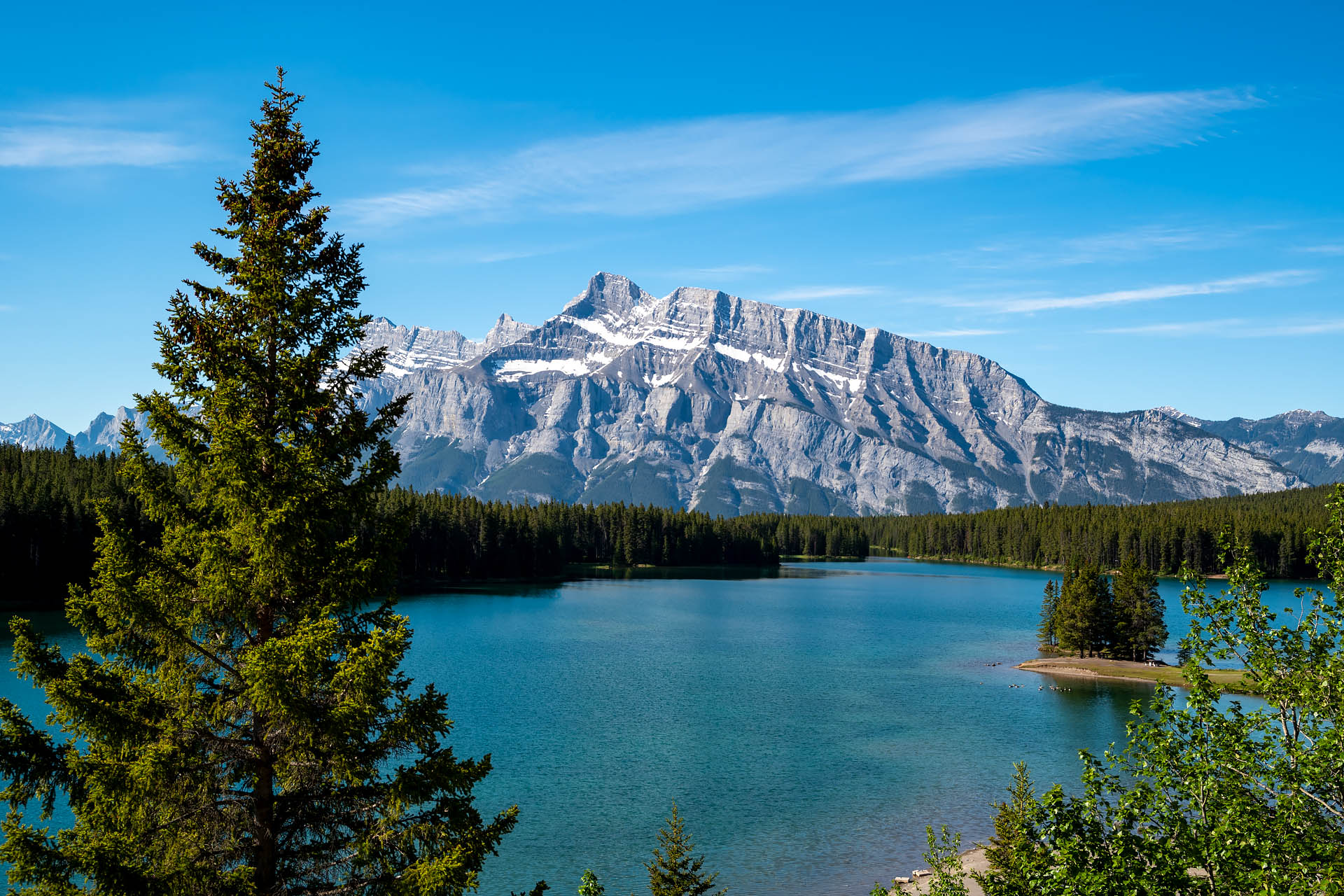 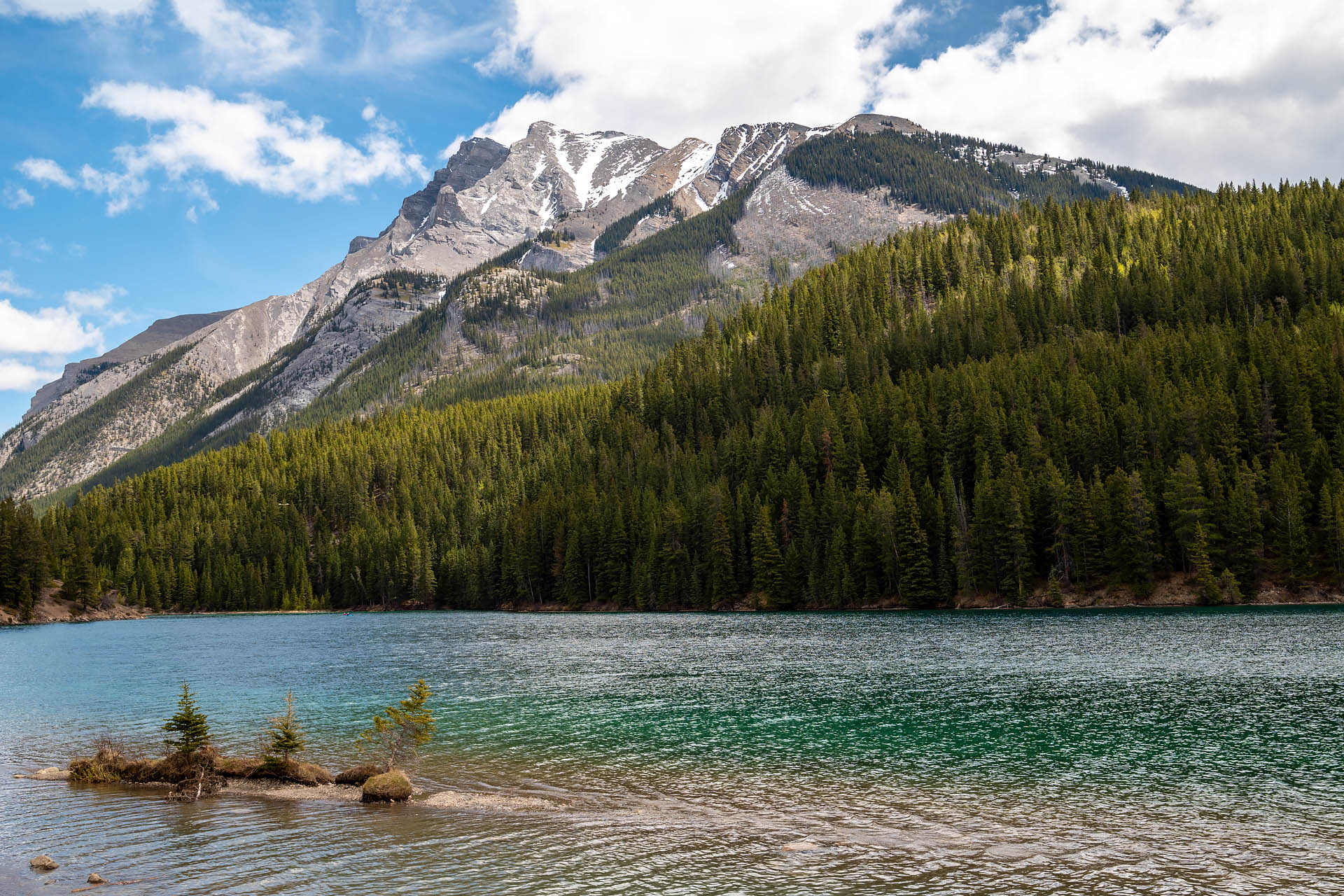 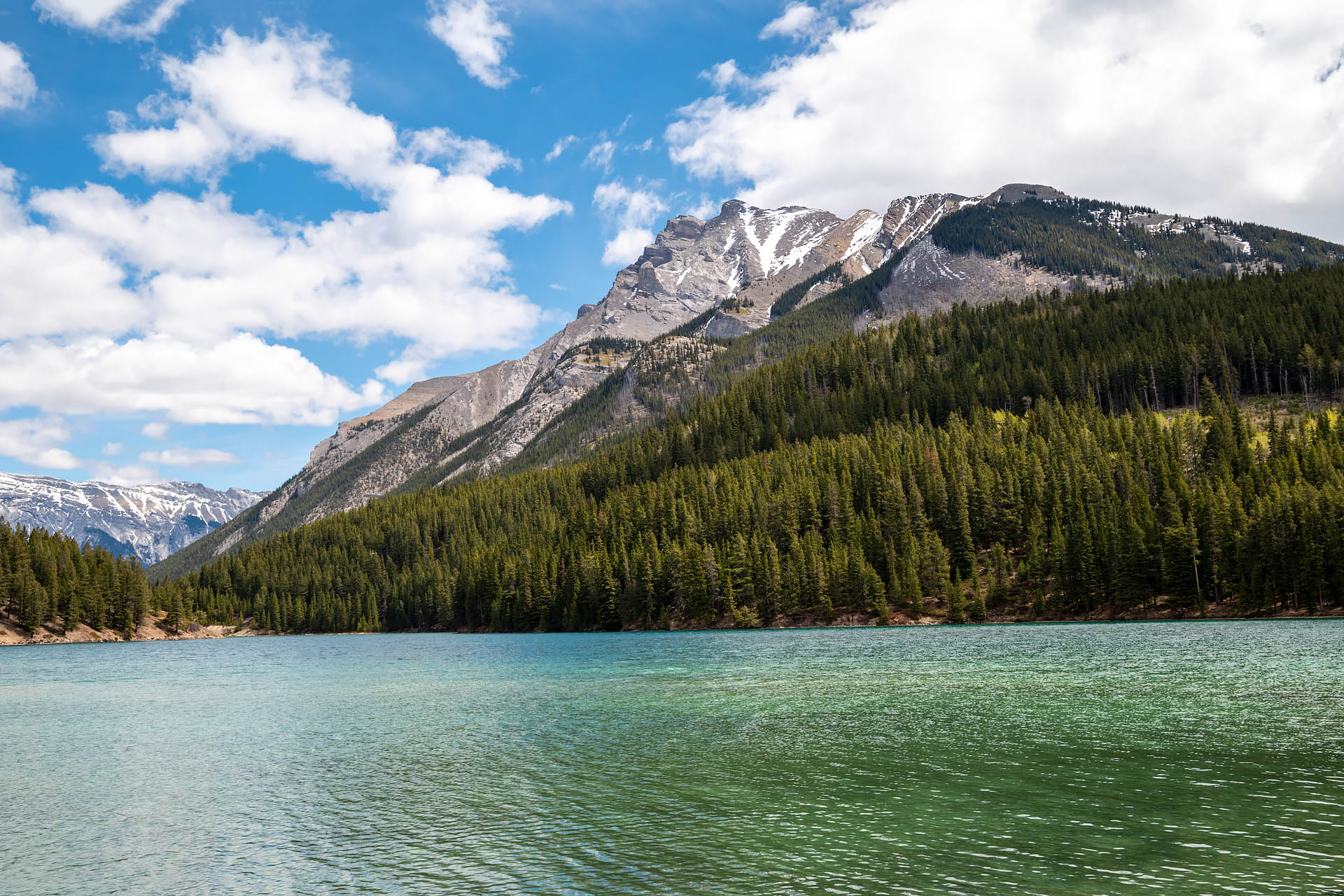 Lake Minnewanka sits within one of three core grizzly areas within Banff National Park. In order to better protect the bears and their critical habitat, seasonal restrictions are in place for lake-area trails. For a couple months each summer (July 10 to September 15 of this year), dogs and bikes are prohibited from the Lakeside, Stewart Canyon, Aylmer Lookout and Aylmer Pass trails. The restrictions are meant to minimize surprise or antagonistic encounters as bears forage on the buffaloberries that grow abundantly around the lake. During this period of peak bear activity, hikers are required to carry bear spray and to hike in tight groups of no less than four individuals (no more than three meters between hikers). Failure to adhere to any rule can result in a $25,000 fine.

The hiking trails begin just past the Black Anchor coffee shop and picnic area, just east of the Lake Minnewanka Parking Lot. Because it’s such a popular recreation site, the first kilometer or so of trail can get pretty busy, especially during the afternoon. That said, it doesn’t take much to escape the crowds here. Walk just a few hundred meters past the picnic area, and it’s already much quieter.

Just under a mile (1.3 km) from the picnic spot, a wooden footbridge crosses Stewart Canyon. Here, a short trail parallels the canyon for another mile, offering the opportunity for an easy hike or short side trip. There were only a handful of people wandering around between the trailhead and bridge when we started out at 9 a.m., and as soon as we crossed the canyon, we found ourselves alone on the trail. 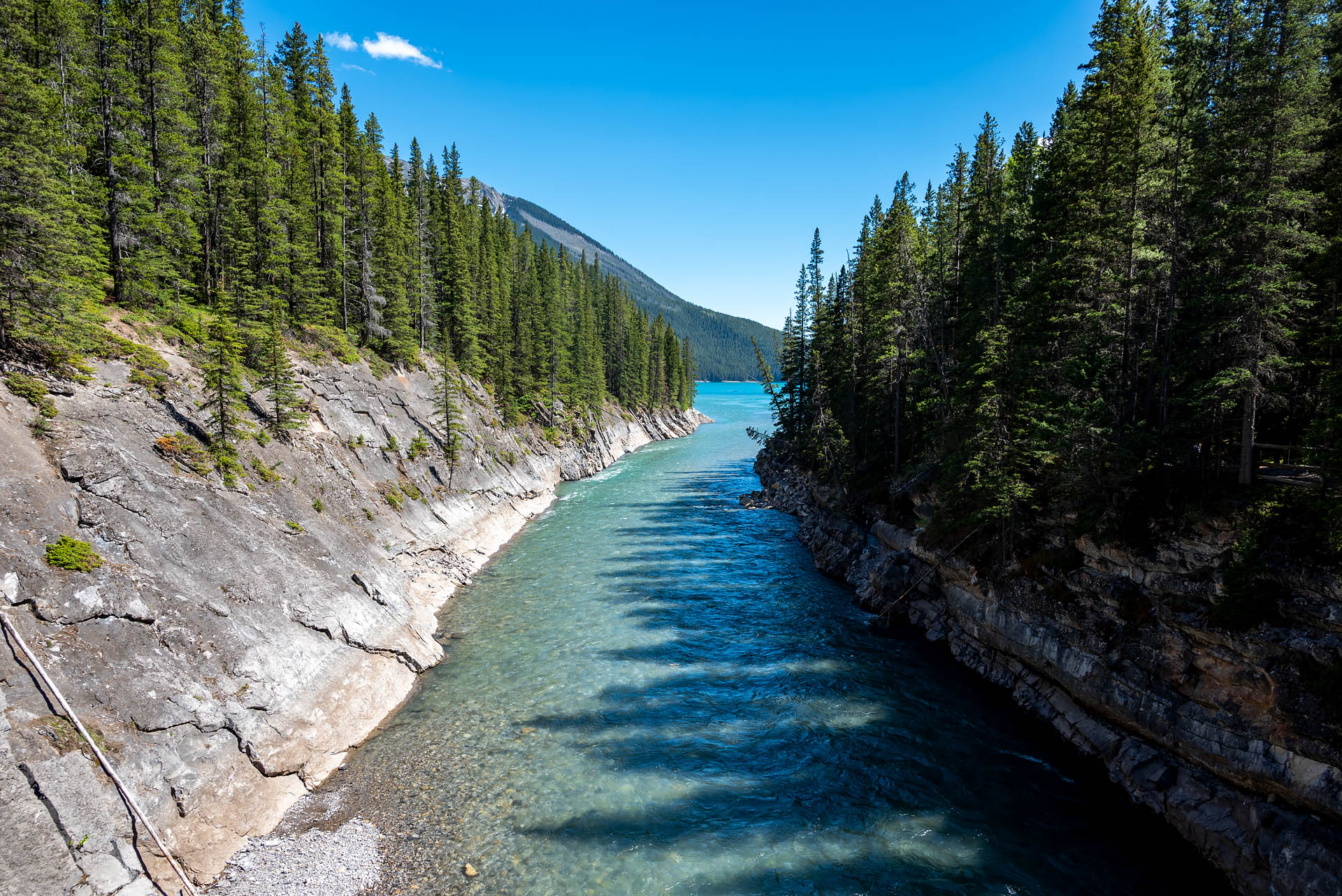 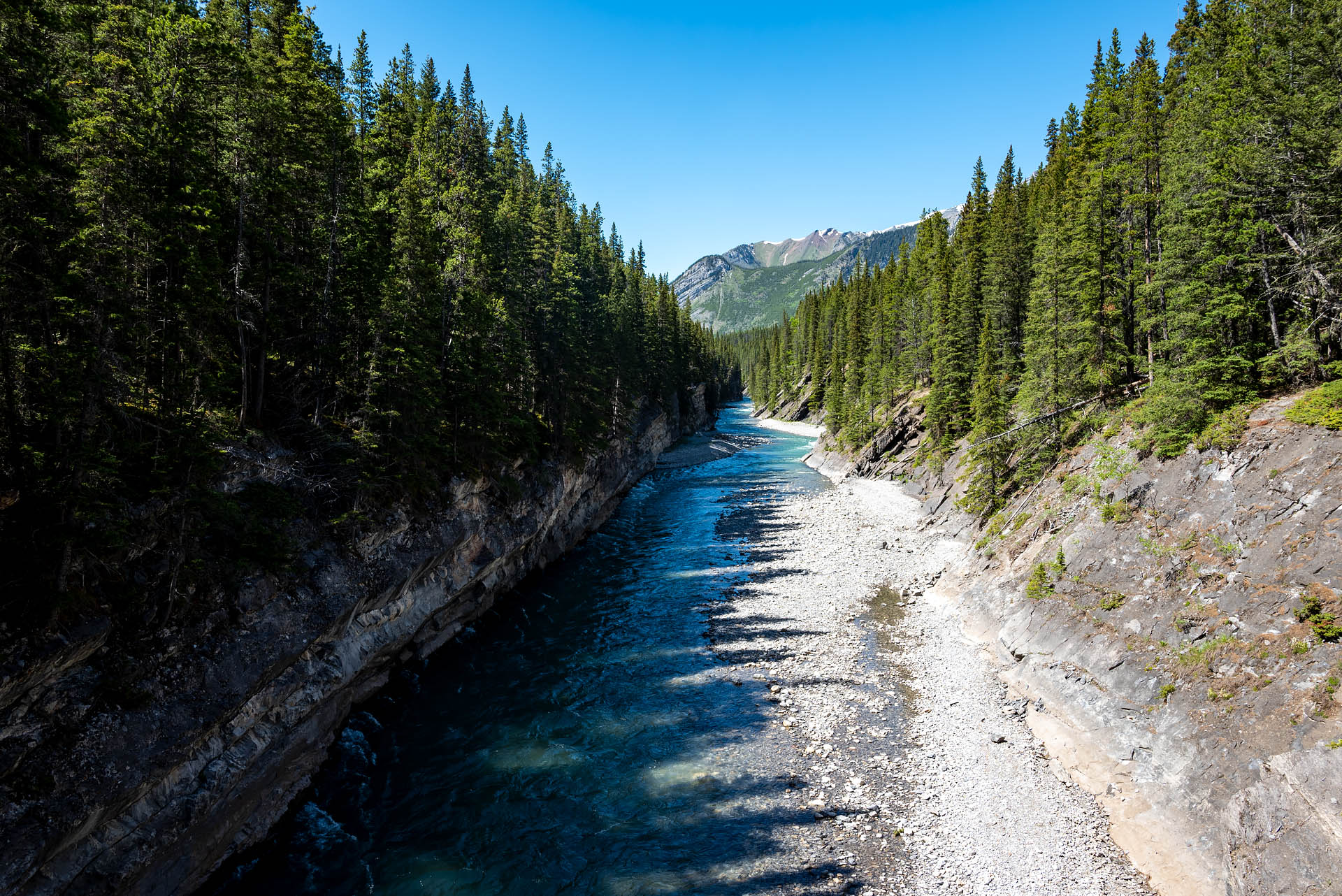 The first five miles (8 km) of the hike are largely forested, paralleling Lake Minnewanka’s northern shoreline. The grade along the lake is very moderate with small, rolling hills, and it’s a fairly popular trail with mountain bikers – we encountered several groups along the lakeside trail. While it’s densely wooded for this first third of the hike, intermittent clearings offer glimpses across Lake Minnewanka’s turquoise waters. Across the lake, Mt. Girouard and Mt. Inglismaldie rise prominently. The trail gains a couple hundred feet of elevation about two miles into the hike – a trivial amount, but just enough for Mt. Rundle to pop prominently into view. 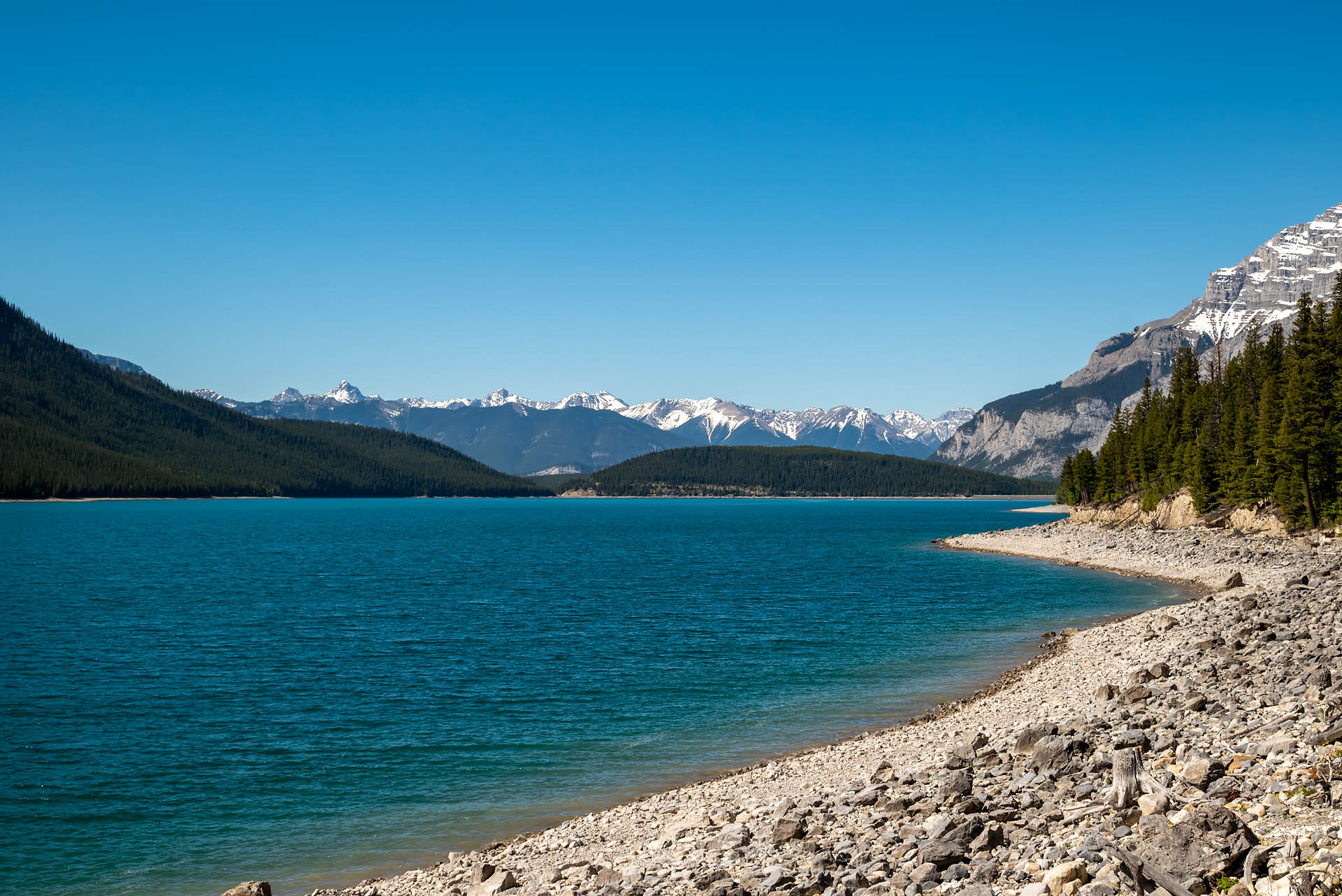 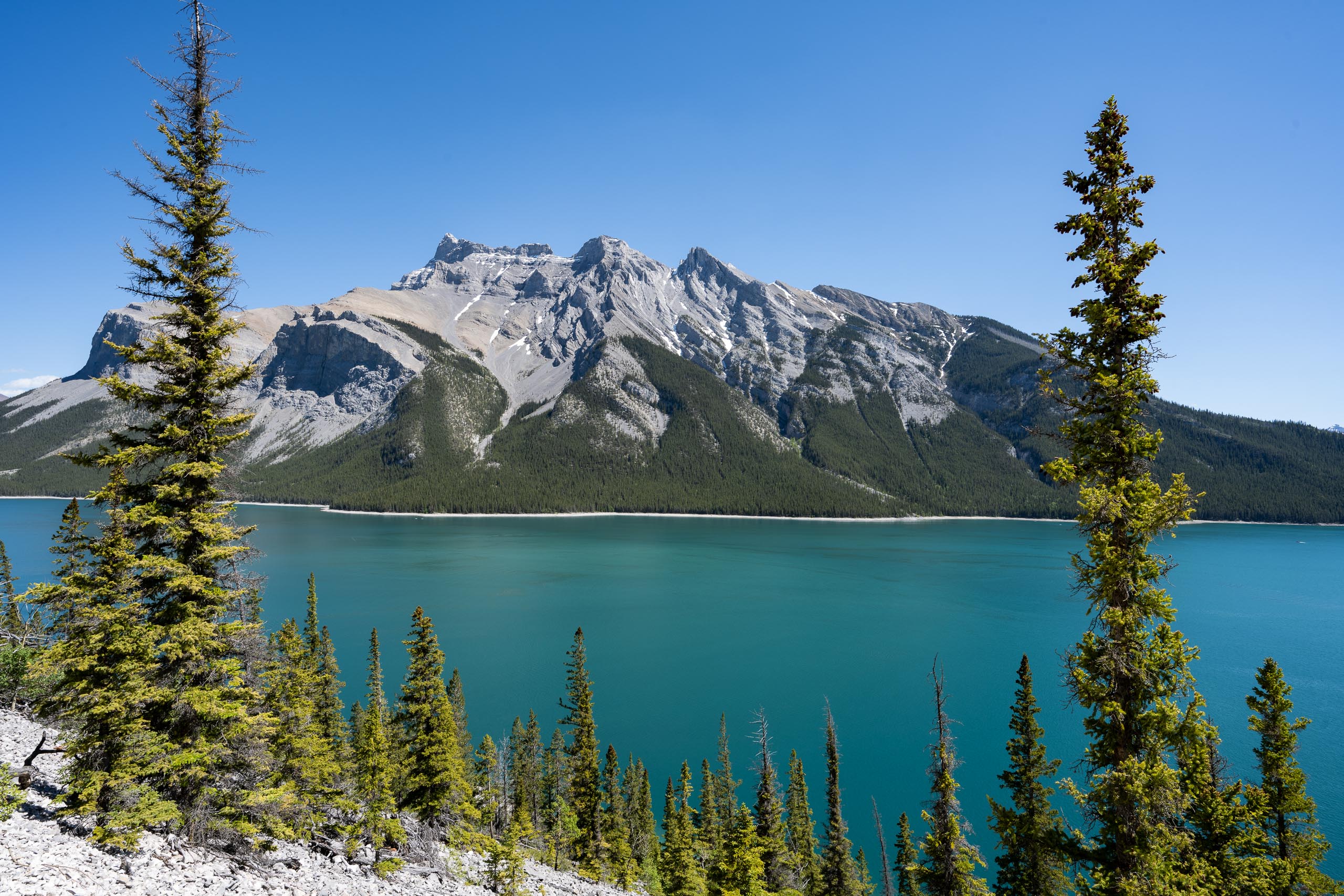 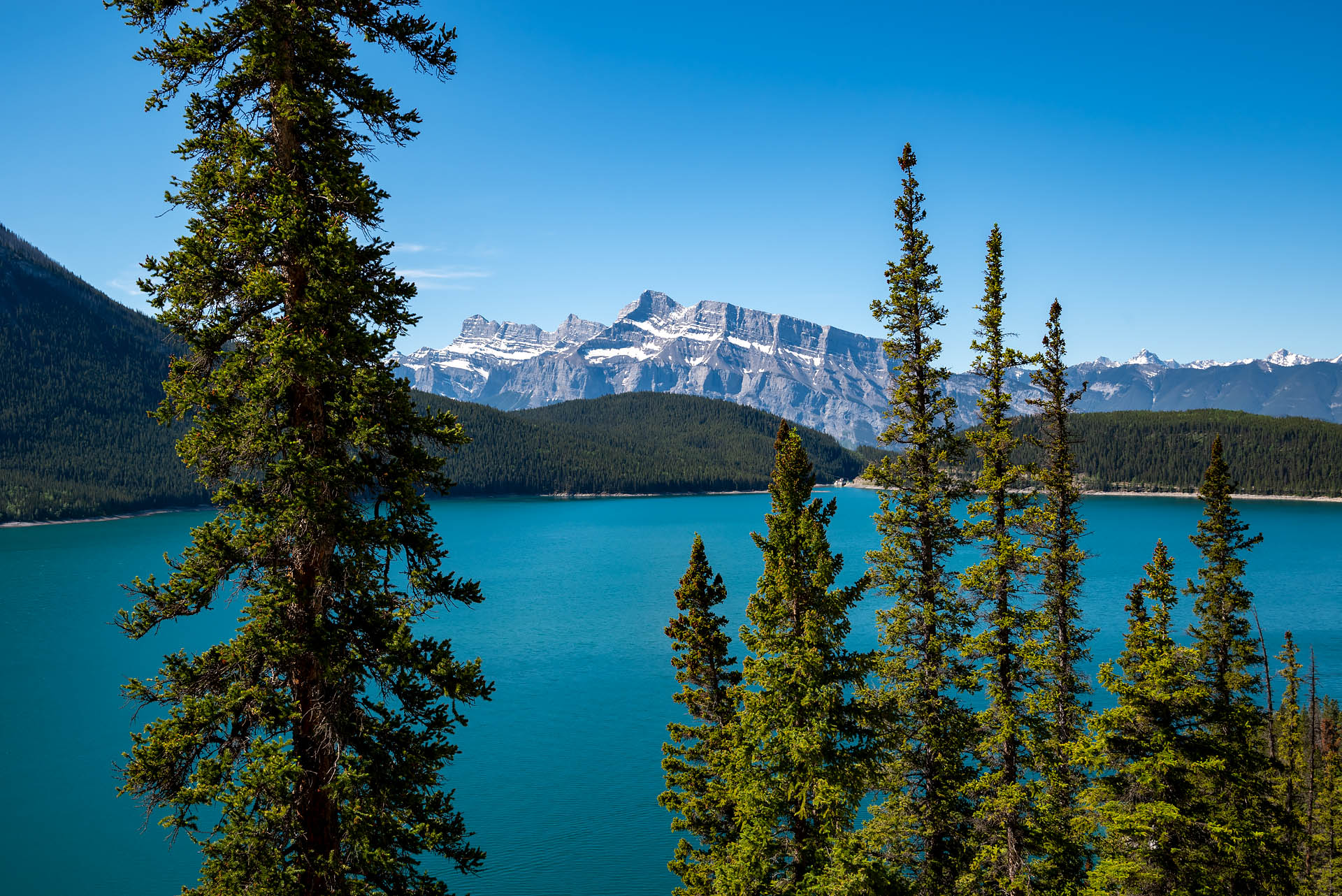 Five miles (8 km) from the trailhead, the trail forks as it reaches Aylmer Pass Junction Campground. The spur to Aylmer Lookout heads to the left, while the lakeshore trail continues for another 13 miles (21 km), all the way out to the Ghost Lakes. The path to the lookout is a decent grade, gaining about 2,000 vertical feet (600 m) over the 2.5 miles (4 km) to the viewpoint. Similar to the lakeside trail, the ascent is mainly wooded. There are a couple spots where you get a peek-a-boo look out to the lake, however you don’t get the prime view until you clear the treeline atop the lookout. 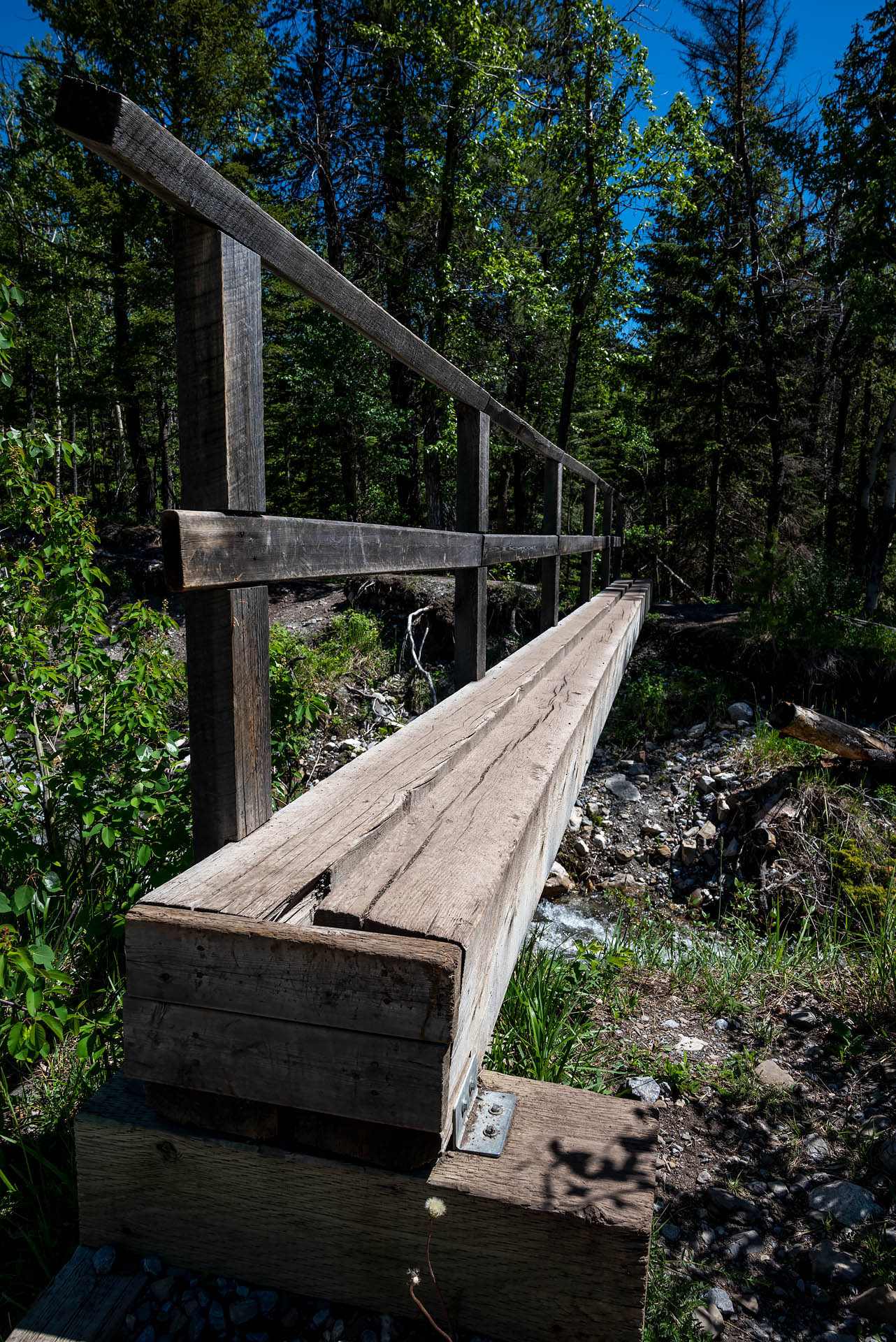 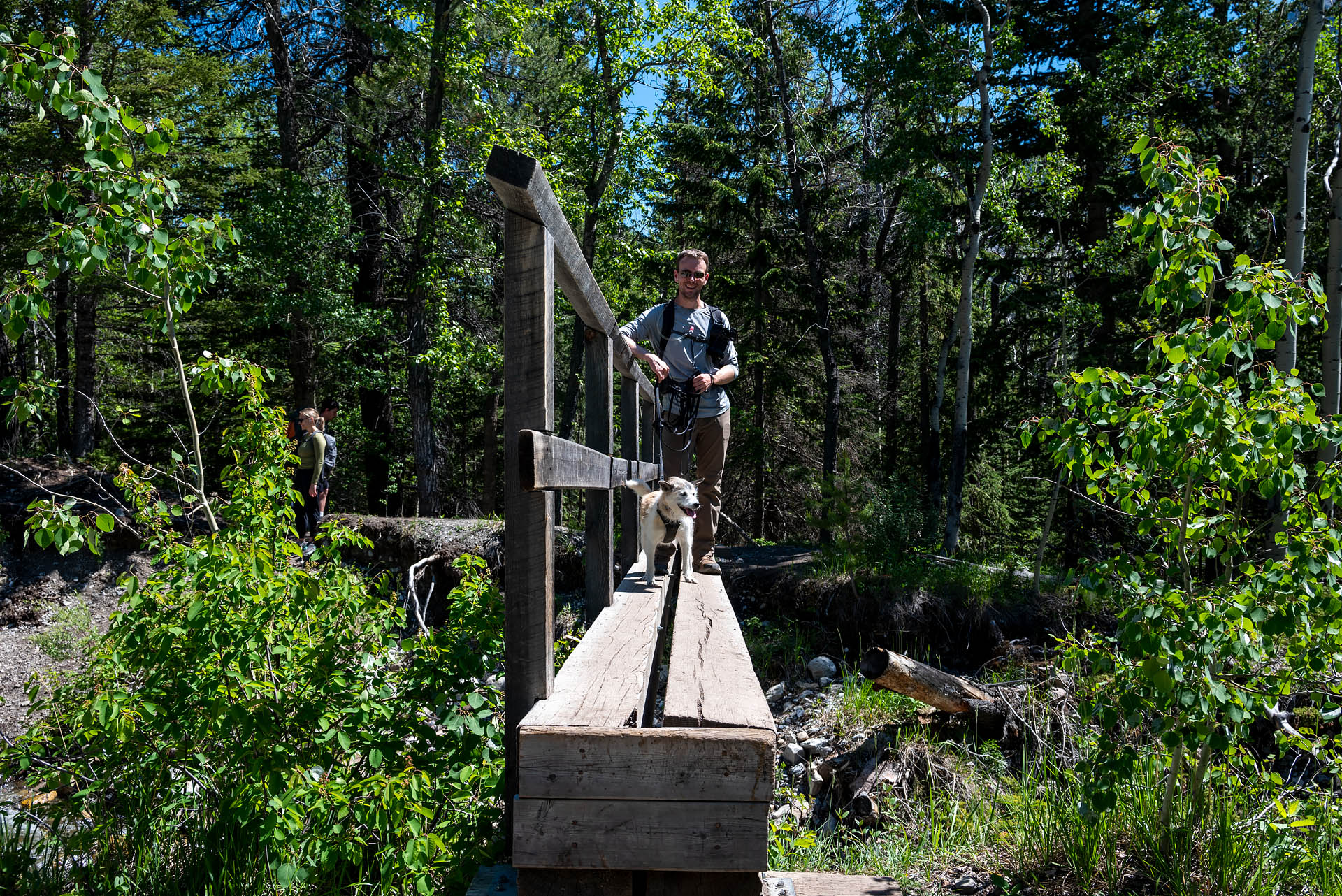 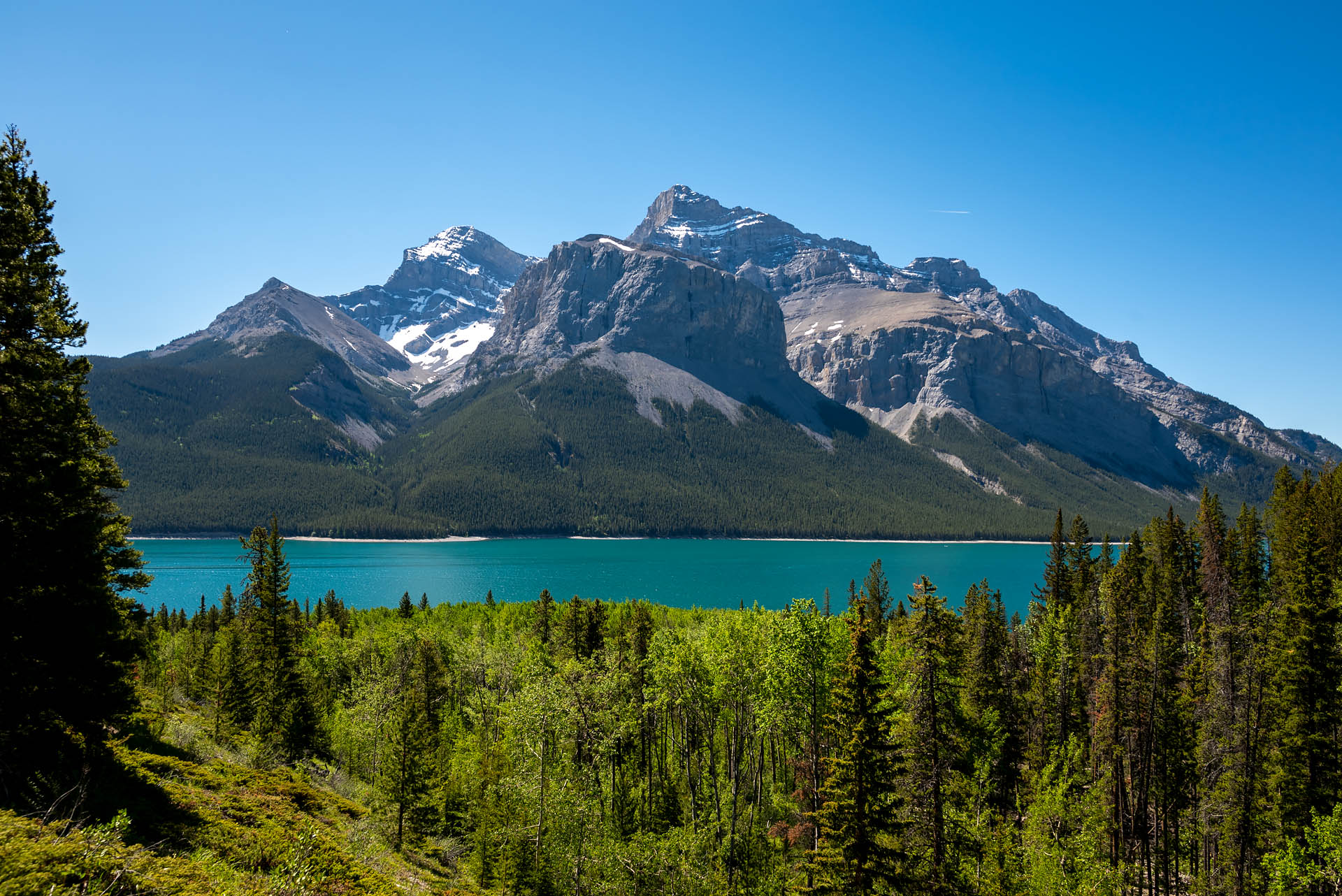 Once you do get up there, the vista from Aylmer Lookout is kind of unbelievable. The slopes of Mt. Astley rise immediately to the west, while Lake Minnewanka’s scalloped, u-shaped contour hugs Mt. Girouard and Mt. Inglismaldie to the south. To the southwest, you can make out Two Jack Lake, the town of Banff, and Cascade Mountain. If you’re treated to a beautiful blue-sky day, this spot is nothing short of spectacular. 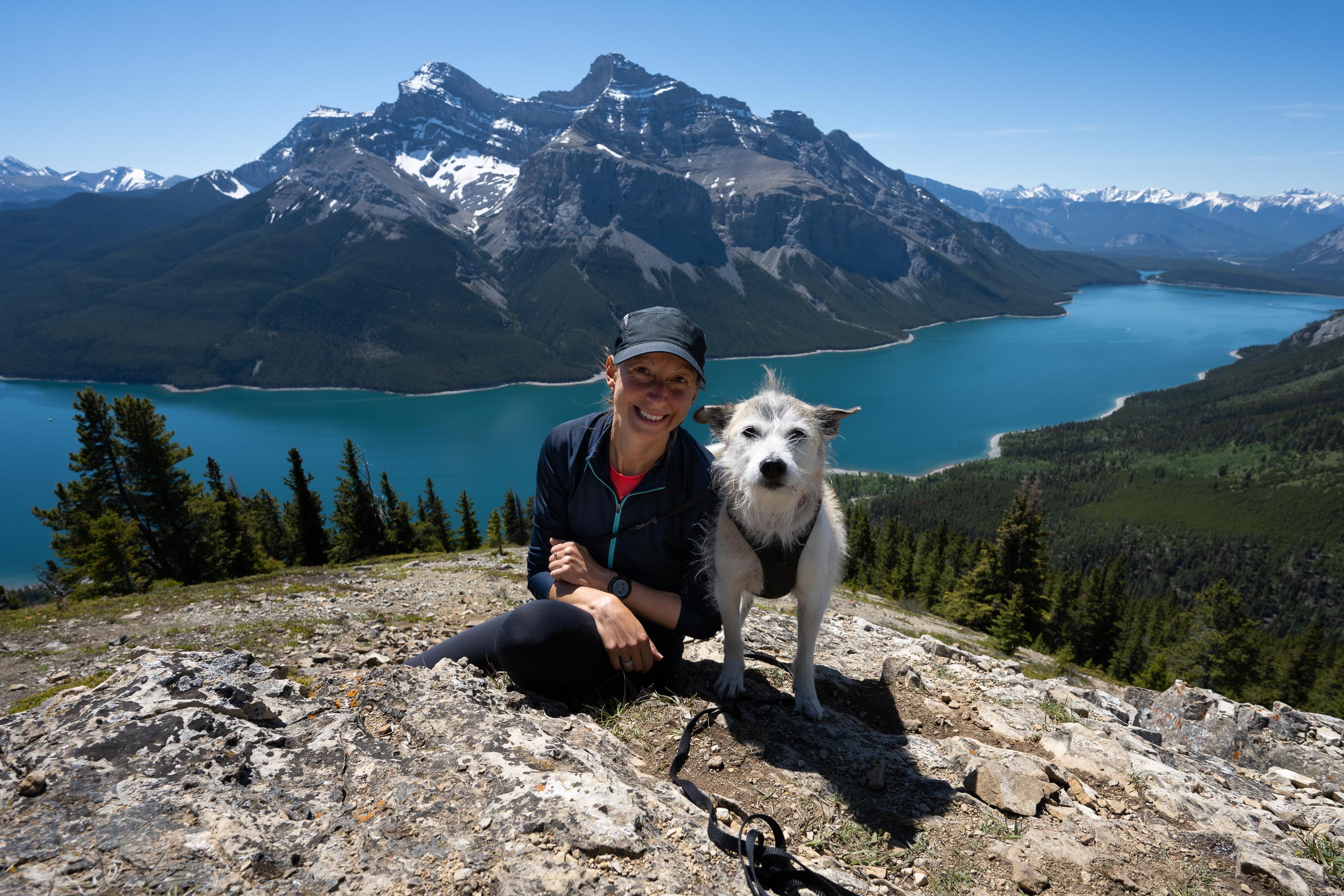 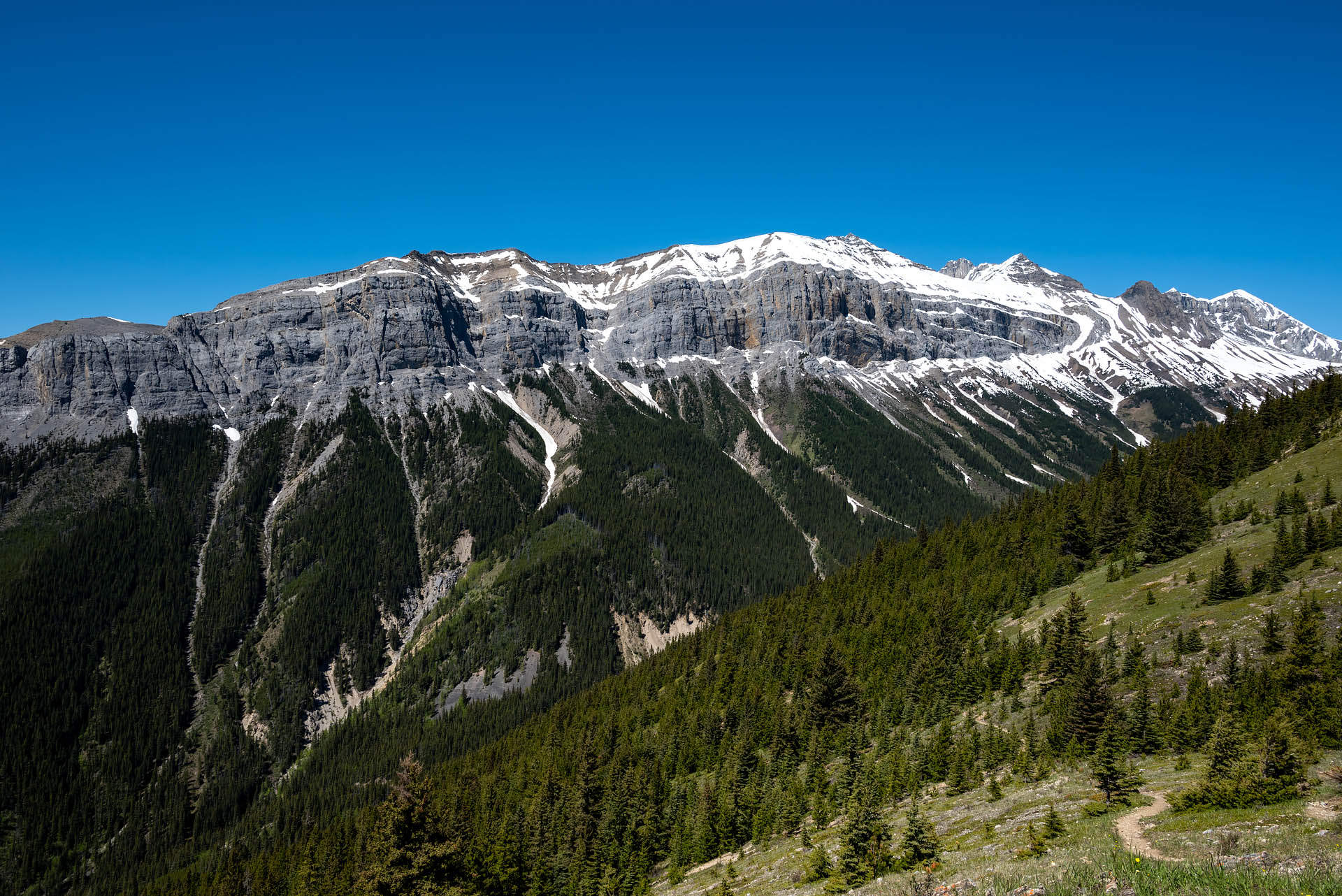 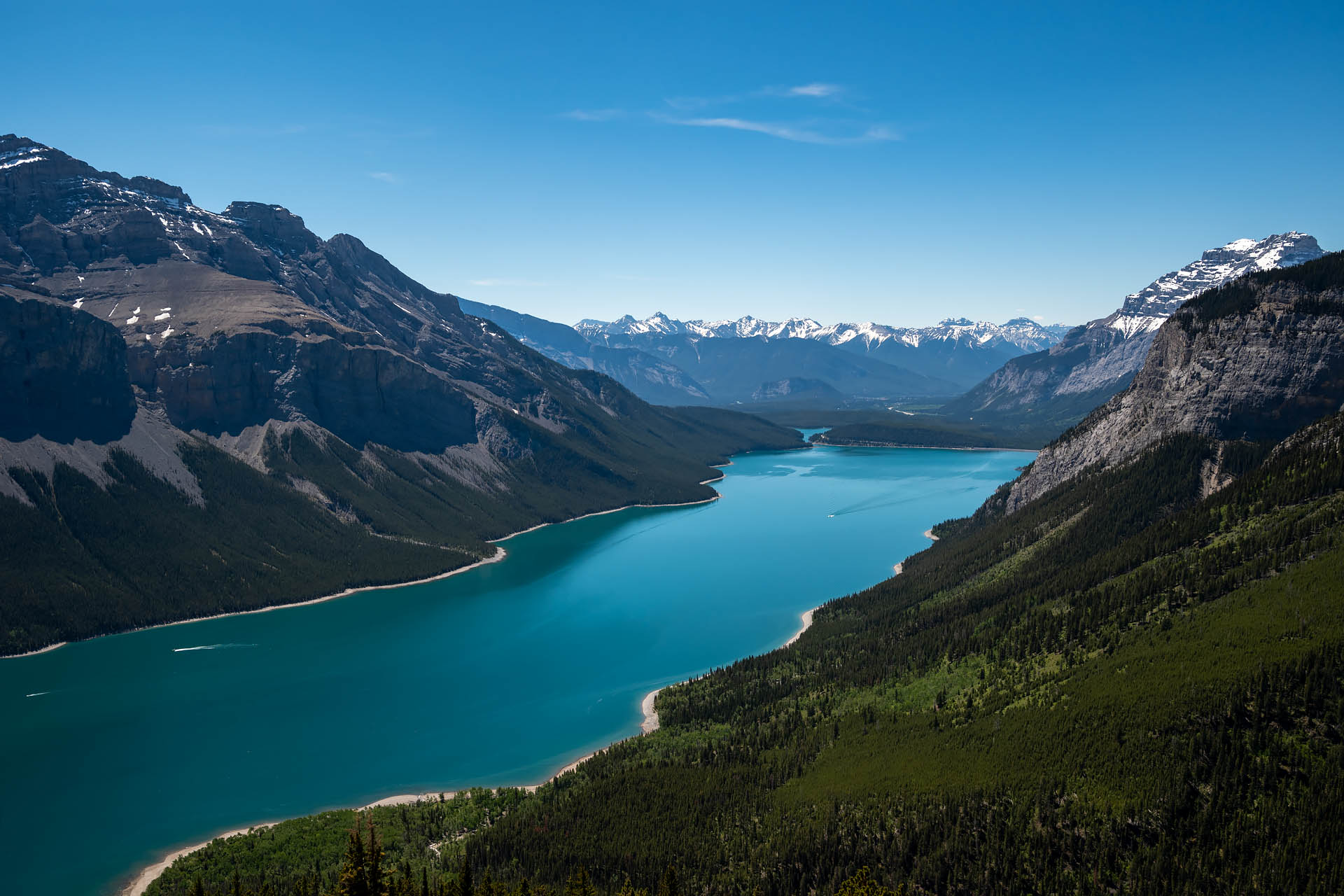 After enjoying a relaxing lunch alongside a handful of other hikers and soaking up that view, we returned to the trailhead via the same route. As we neared the edge of the shore, Sanchez began begging to go down to the lake. For a dog that doesn’t really love to swim, she gets so friggin’ excited any time she sees a lake or river. We obviously couldn’t leave without heeding her wishes, so off we went to the rocky beach. She had such a good time splashing around in the chilly water, and was totally unimpressed when it finally came time to head home. 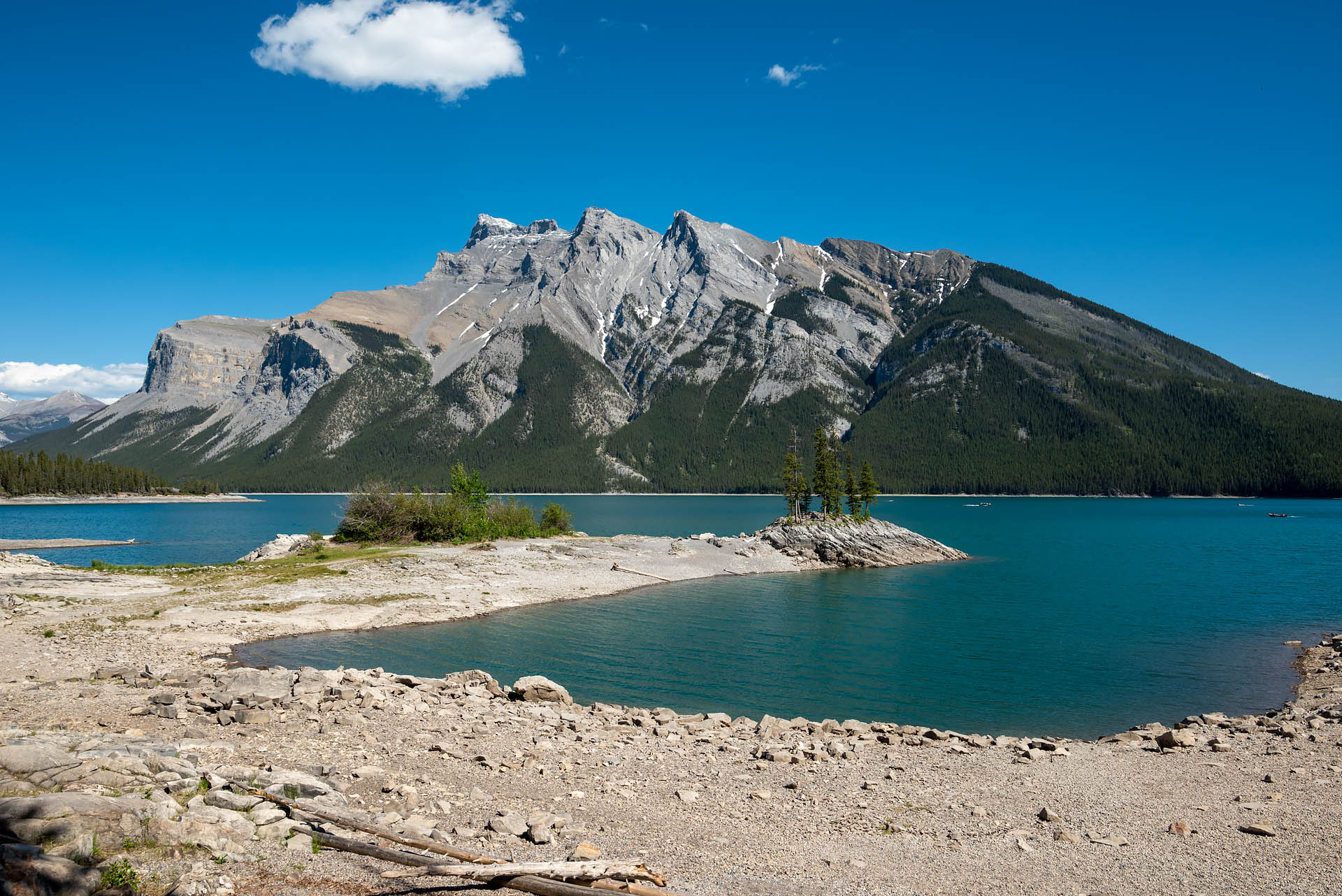 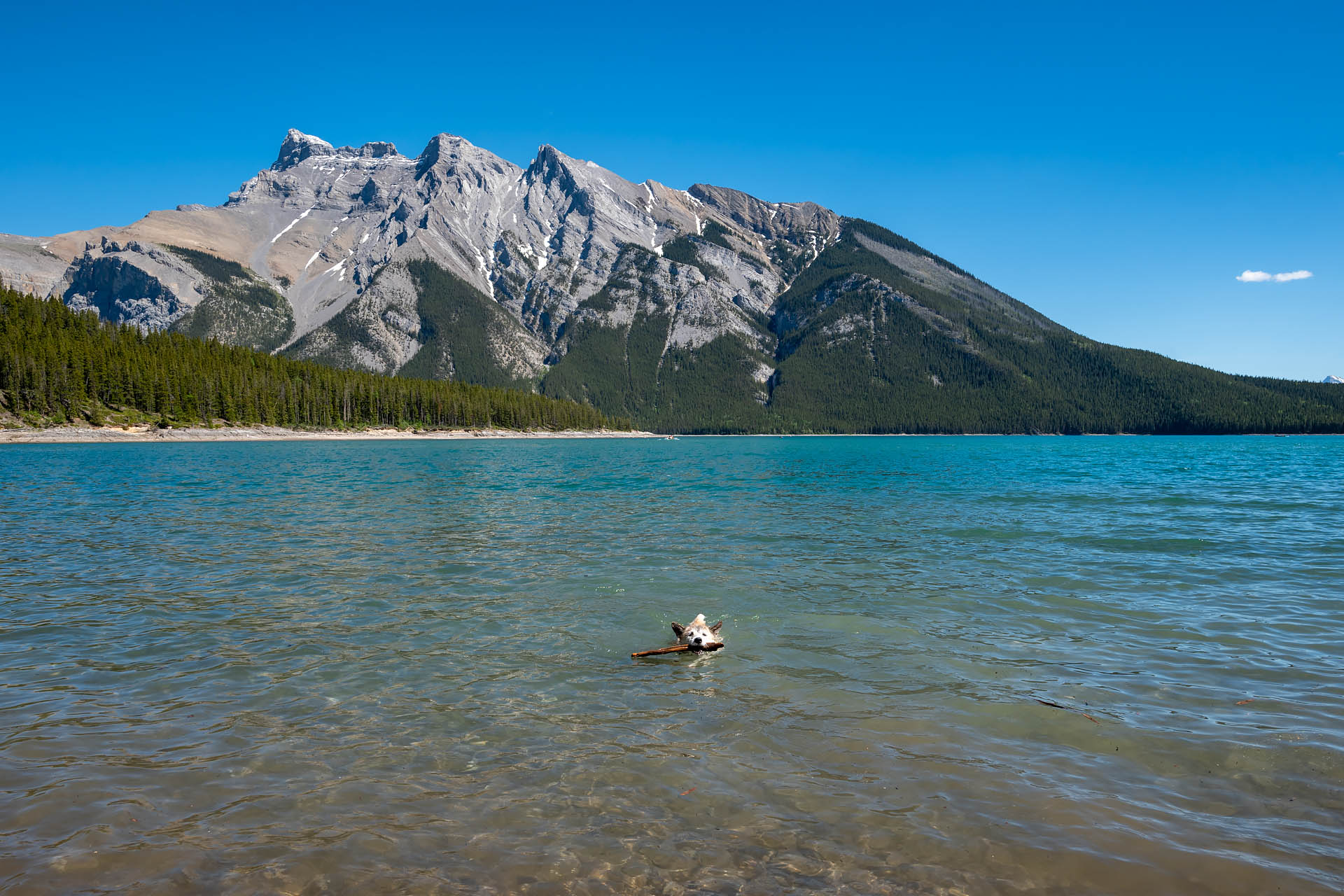 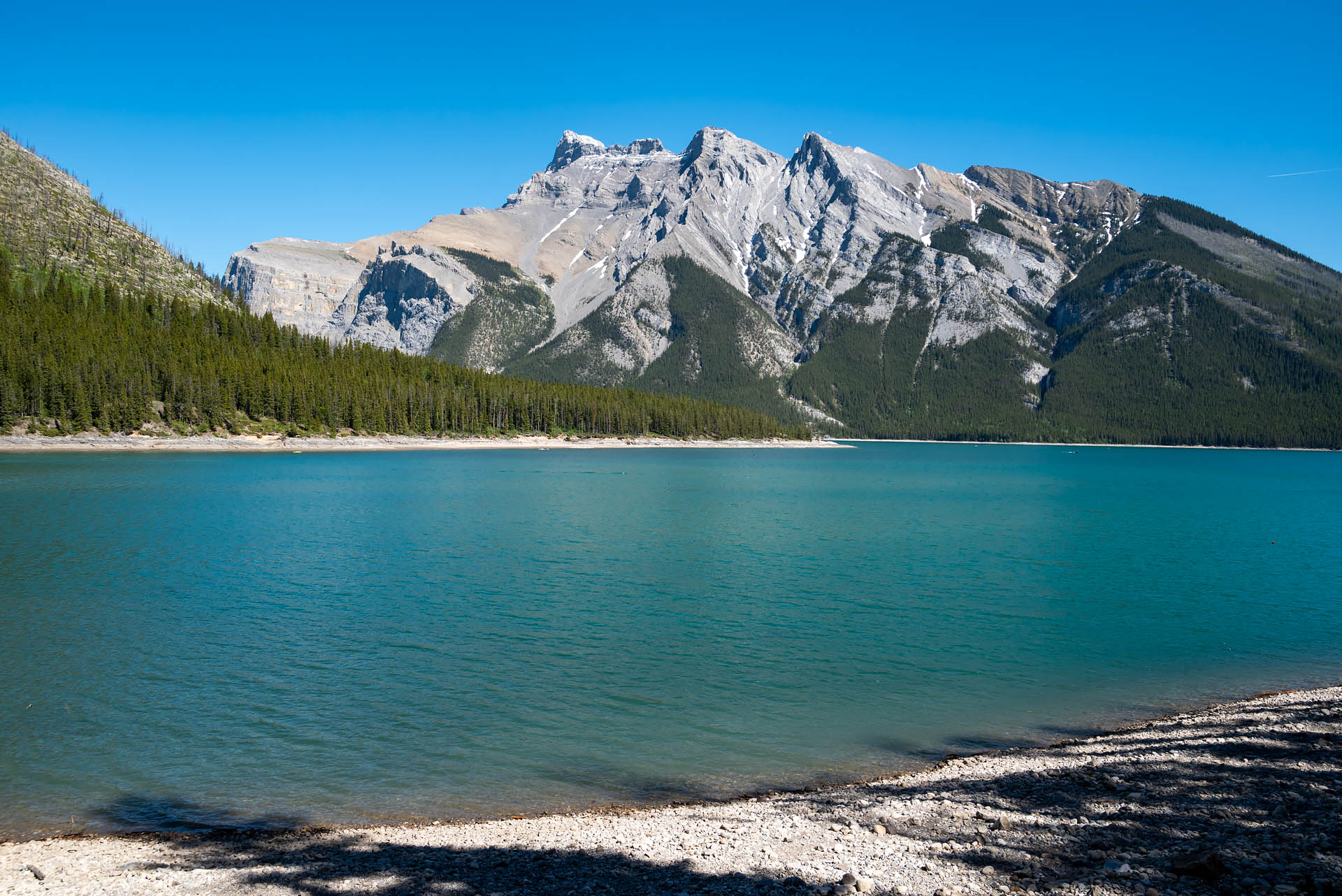 Overall, we really enjoyed this trail. While it may not be the most exciting in terms of challenging terrain or persistent alpine views, that one climatic lake view seemed well worth the effort. Additionally, Aylmer Lookout is one of the earlier-season trails to melt out within the national park. Consequently, it’s a great option if you’re looking for a solid day hike before the high-elevation trails open up for summer hiking. 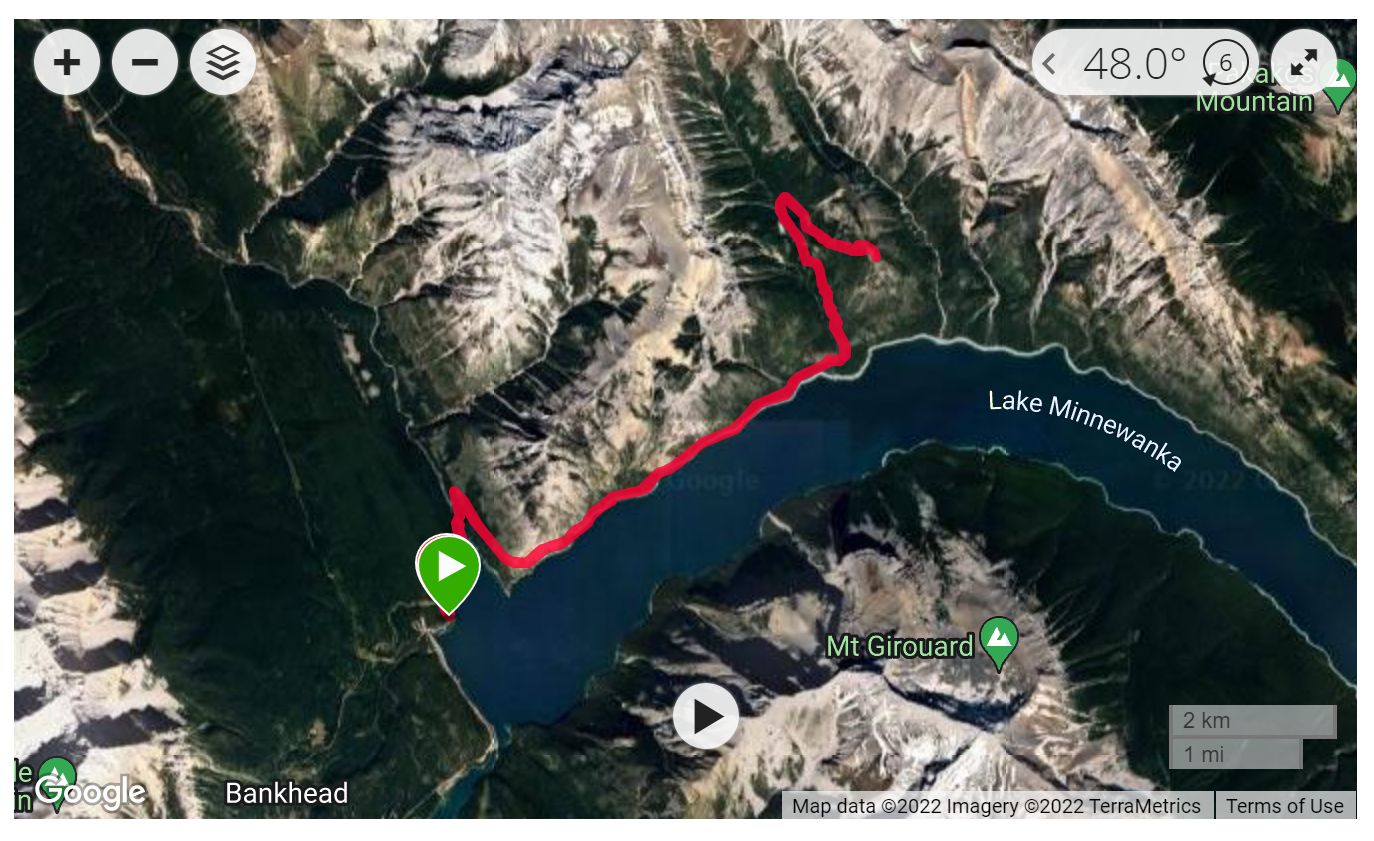 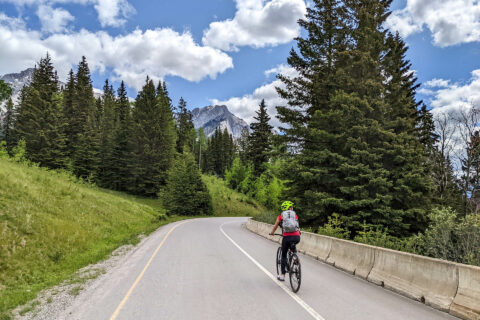 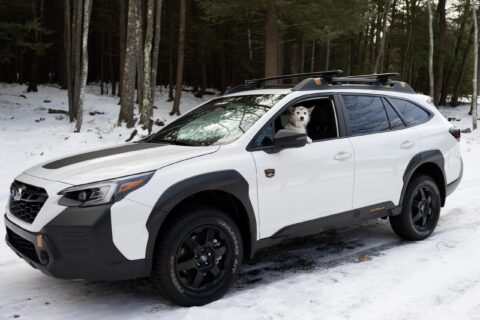 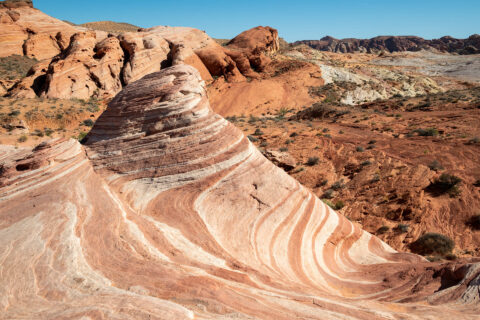 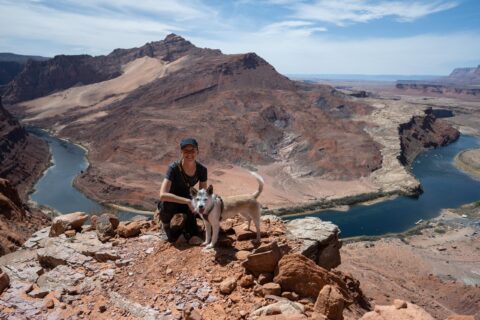 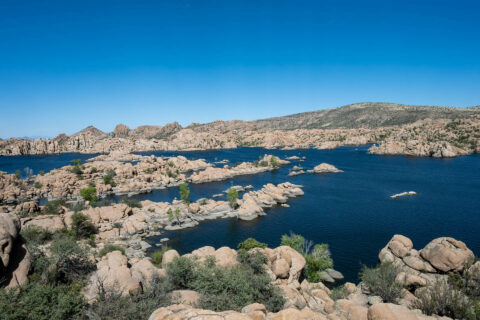 This weekend, we headed over to Banff to knock my

What do you do when your best friend’s mom rando

The view from Applebee Dome in Bugaboo Provincial

One of Yoho’s most well-known hiking routes is t

The columbine are out in force here in the mountai

Sunday we headed back up the Icefields Parkway to

It was a beautiful weekend for hiking here in the

Eighteen years of togetherness and he still seems

For our second hike this weekend, we headed an hou