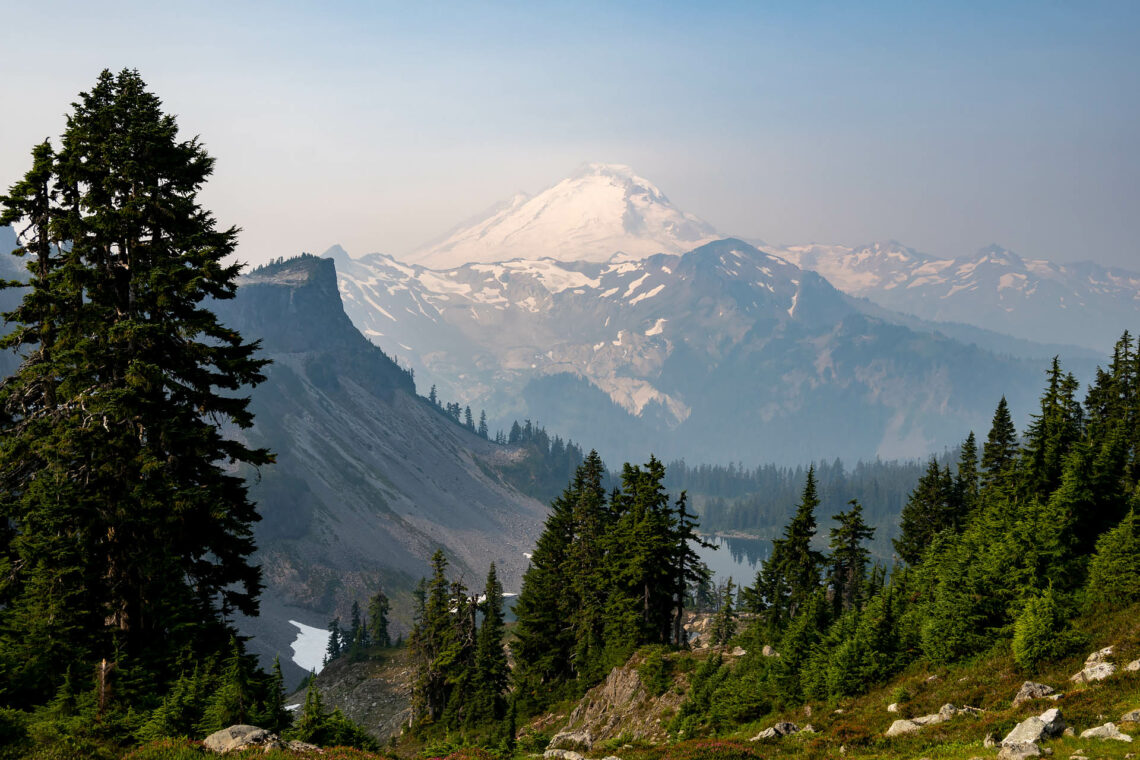 One of the more popular routes in the Mt. Baker Wilderness is a 6.5-mile circuit around the Chain Lakes. Circumnavigating flat-topped Table Mountain, the trail traverses subalpine lakes and wildflower meadows on the northeast side of Mt. Baker. With commanding views of Mt. Shuksan as well as Mt. Baker’s glaciated summit, this spot is a favorite for year-round recreation.

The Chain Lakes Trail can be accessed from two points – Heather Meadows and Artist Point. Located at the end of the Mt. Baker Scenic Highway, Artist Point is known for being one of the most scenic spots in the North Cascades. It’s also one of the snowiest. Surprisingly, the area holds the world record for largest single-season snowfall, having received a mind-blowing 95 feet (29 meters) during the 1998–1999 season.

Because the area gets some of the heaviest snowfall in the Cascades, the trail isn’t typically snow-free until August. Consequently, if you’re interested in hiking the Chain Lakes, the summer season is pretty short. If winter’s more your jam, Artist Point is a hugely popular spot for snowshoeing. There is the potential for avalanche danger, however, so make sure to do your research before heading out for a winter excursion.

Depending on seasonal road closures, or your general starting point preference, you can begin the Chain Lakes Trail (#682) from either Heather Meadows or Artist Point – about 40 minutes (22 miles) east of the town of Glacier. When we hiked on August 14, 2021, the last portion of road over Austin Pass to Artist Point was still closed. As a result, we started out on the trail from Heather Meadows.

Unfortunately, by the time we ventured up there it seemed like half the state of Washington was on fire. At the time we hiked in mid-August, wildfires were burning more than twenty times more land across Washington and Oregon than on the same date the previous year. With thirty-nine large fires burning across the state, another raging just across the border in B.C., and unfavorable winds, it was an incredibly smoky outing. It’s both shocking and depressing to think that, looking at this photo of Mt. Shuksan, this was merely a ‘moderate’ smoke day. 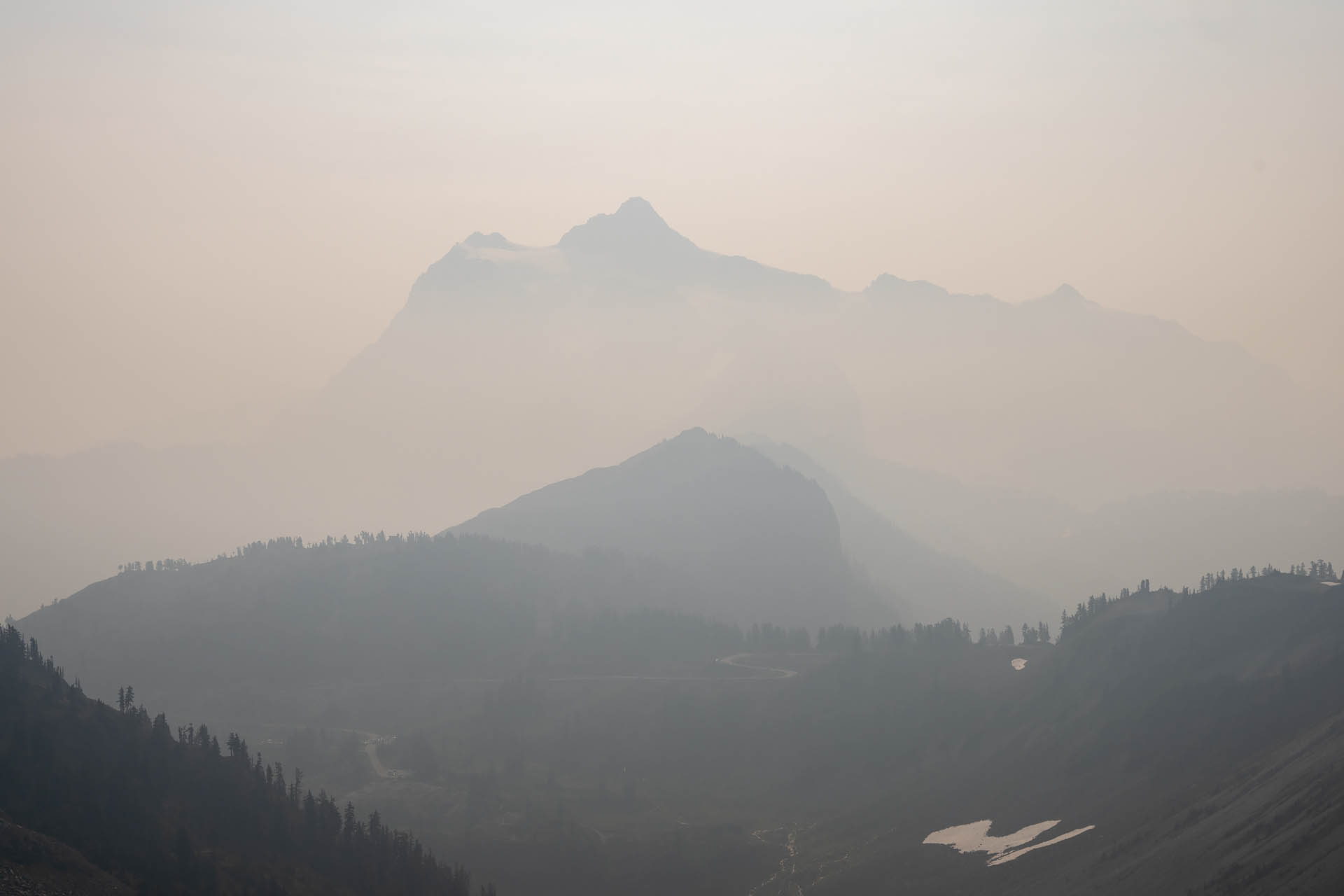 Under smoke-filled skies, we dipped down from the parking area at the Heather Meadows Visitor Center toward the Bagley Lakes. We opted to hike counterclockwise solely because most other hikers were beginning in the opposite direction and we wanted to avoid foot traffic. After crossing a small footbridge and traversing the north shore of the largest pool, the trail began climbing up to Herman Saddle. The ascent to the saddle was the steepest section of trail (pretty moderate), gaining 1,300 vertical feet over 1.75 miles. 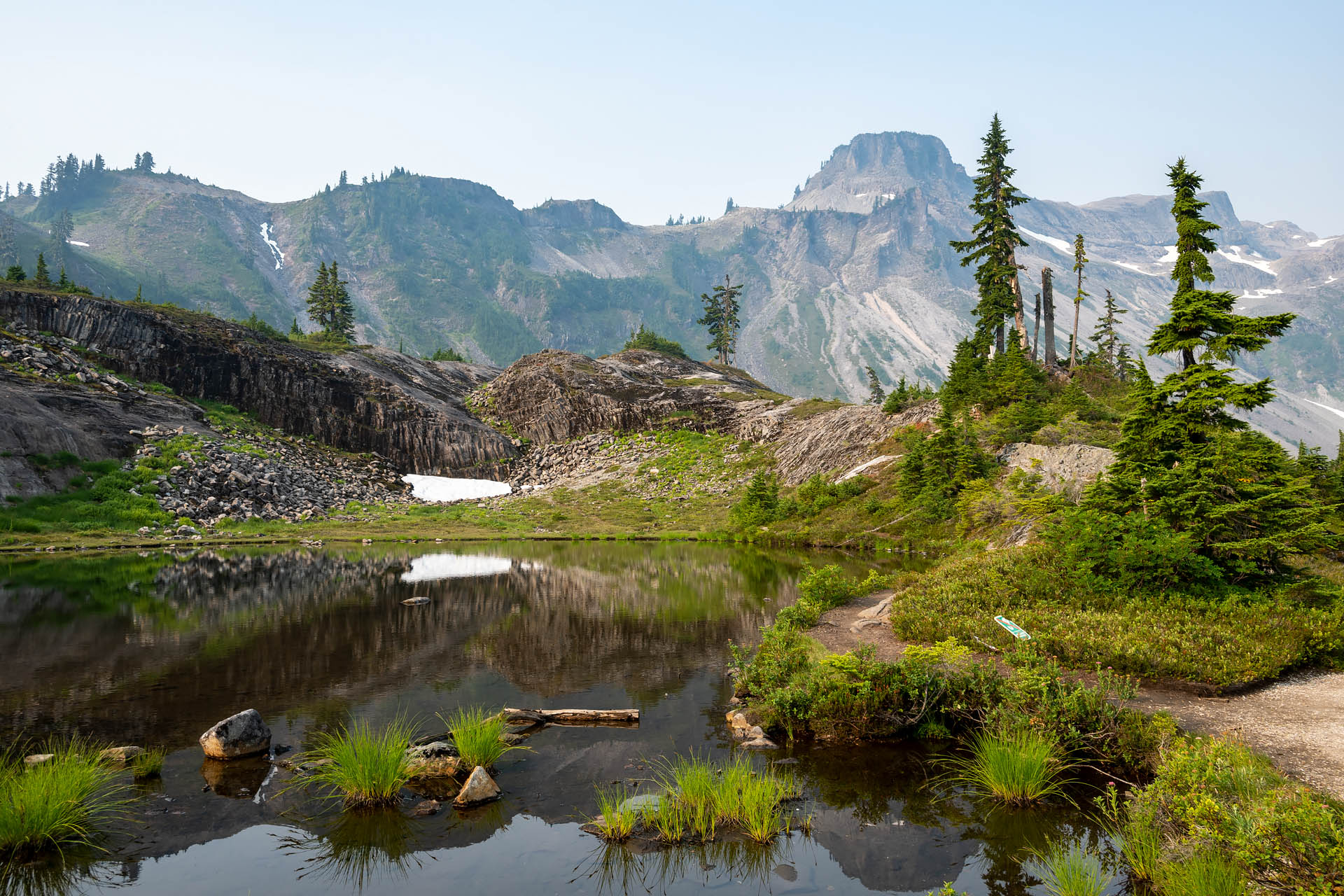 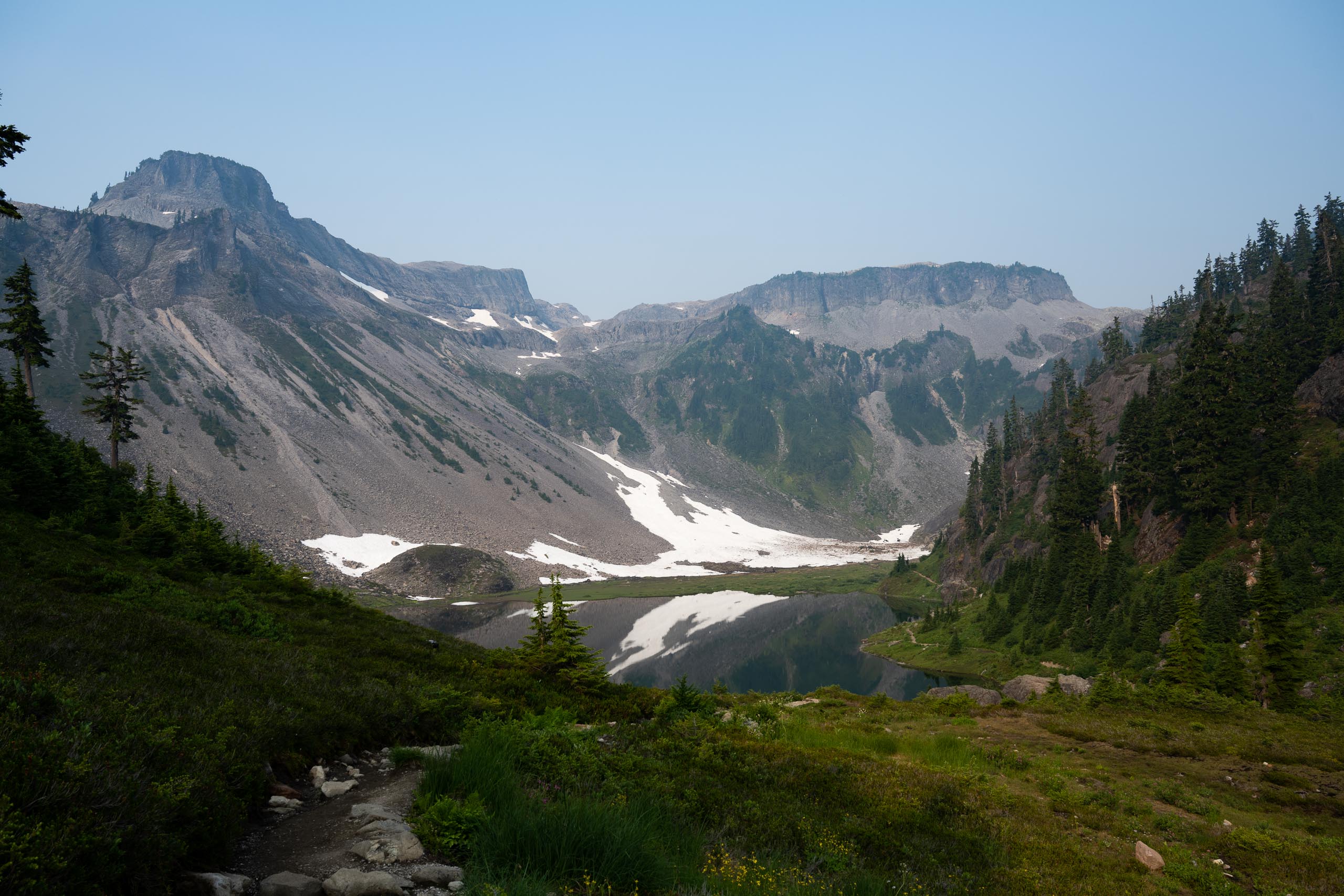 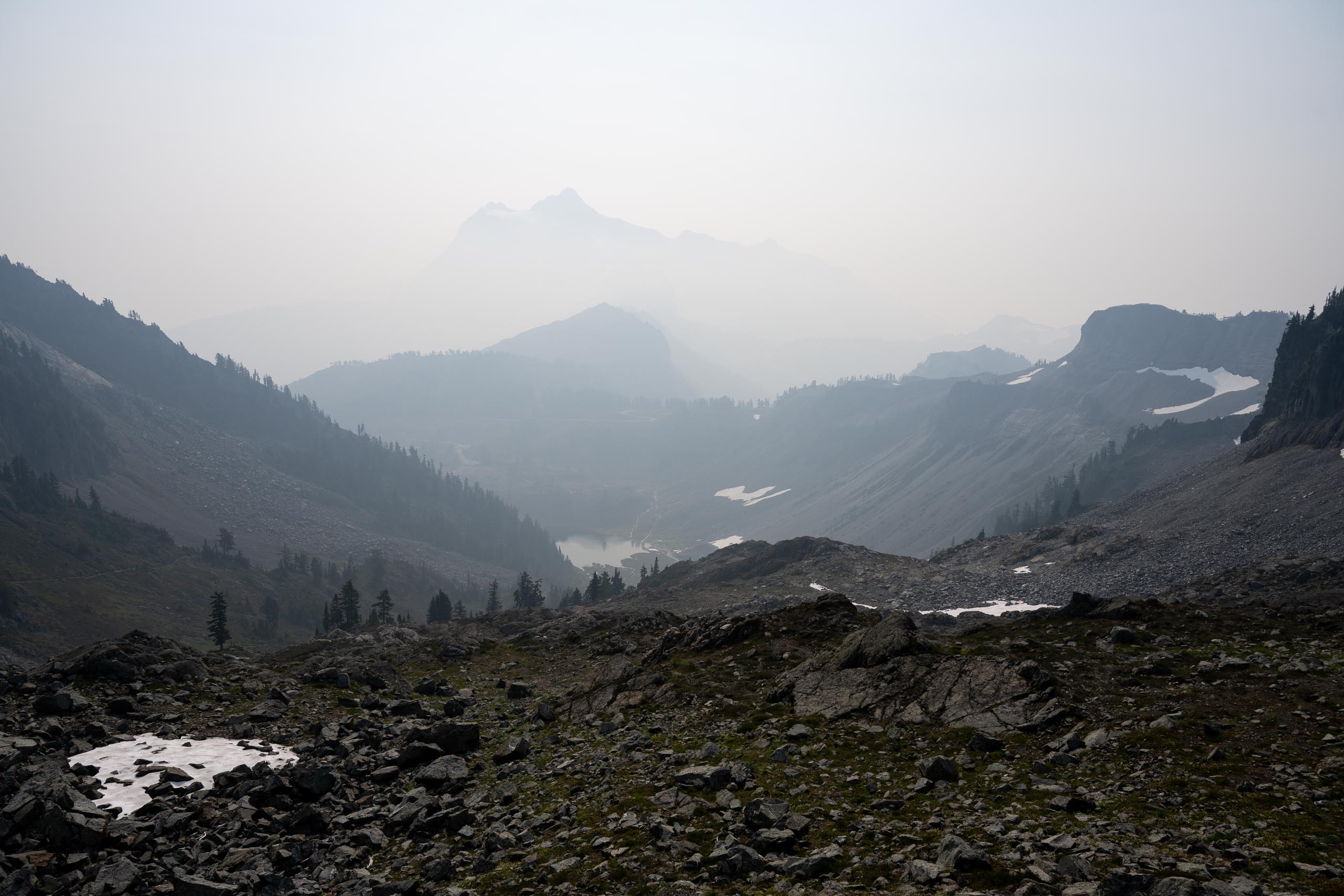 Atop the saddle – a modest 5,500’ of elevation – the views were beautiful, even if they were somewhat obscured by smoke. The red heather was out in force, and Mt. Baker’s north face made for a dramatic backdrop behind Iceberg Lake. There were a few large boulders (i.e. agility obstacles) scattered about, as well as a handful of scurrying rodents, so Sanchez was totally stoked. 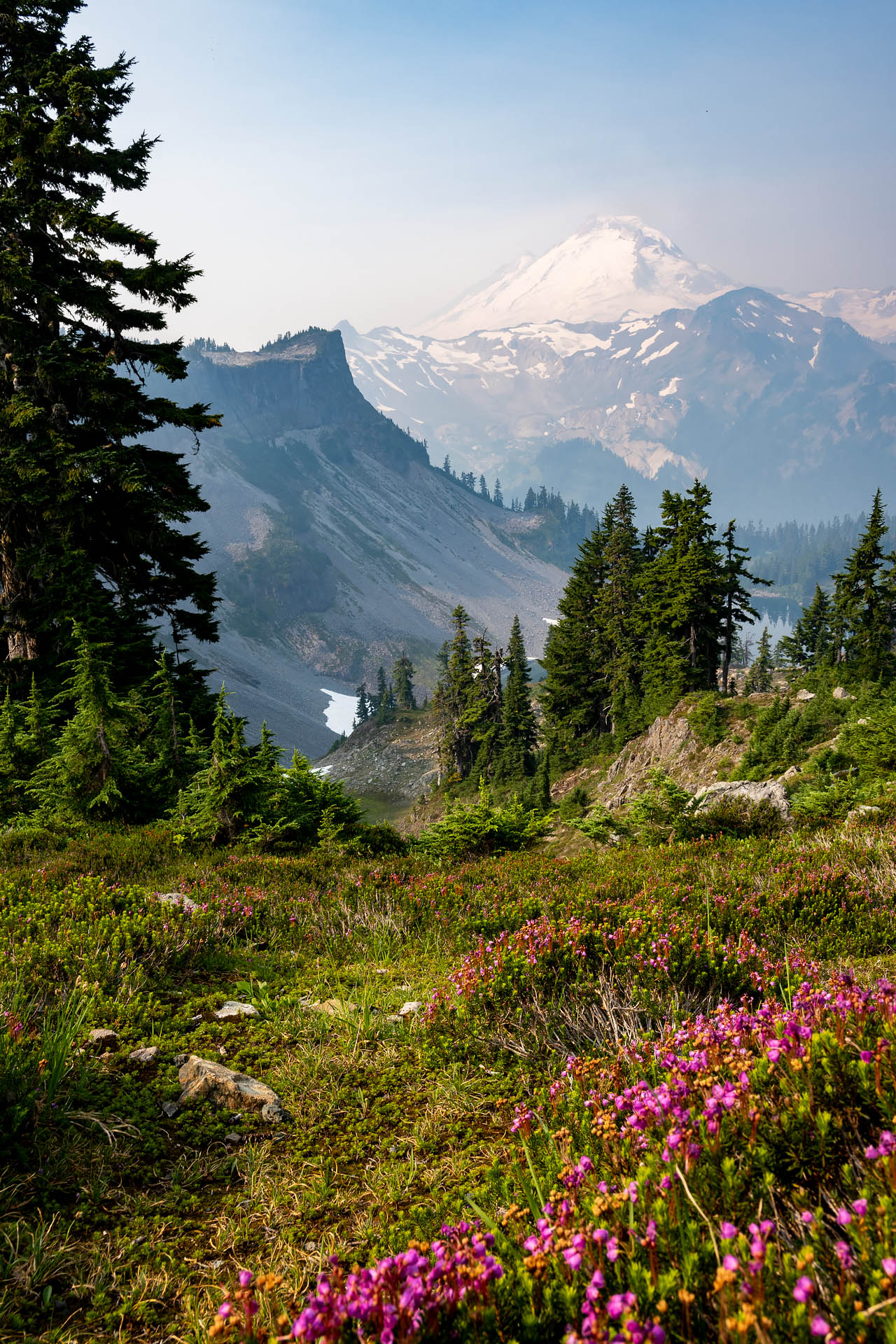 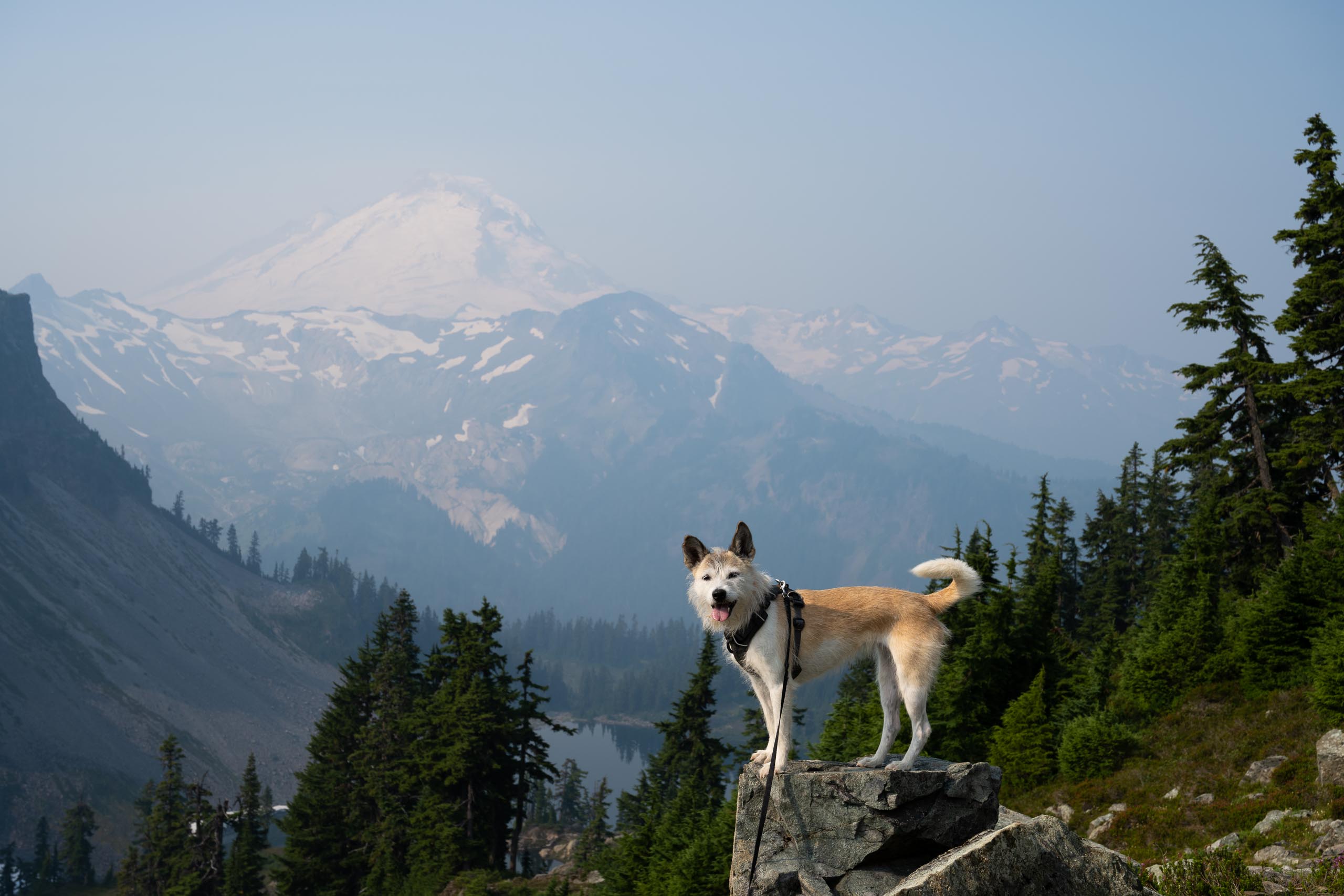 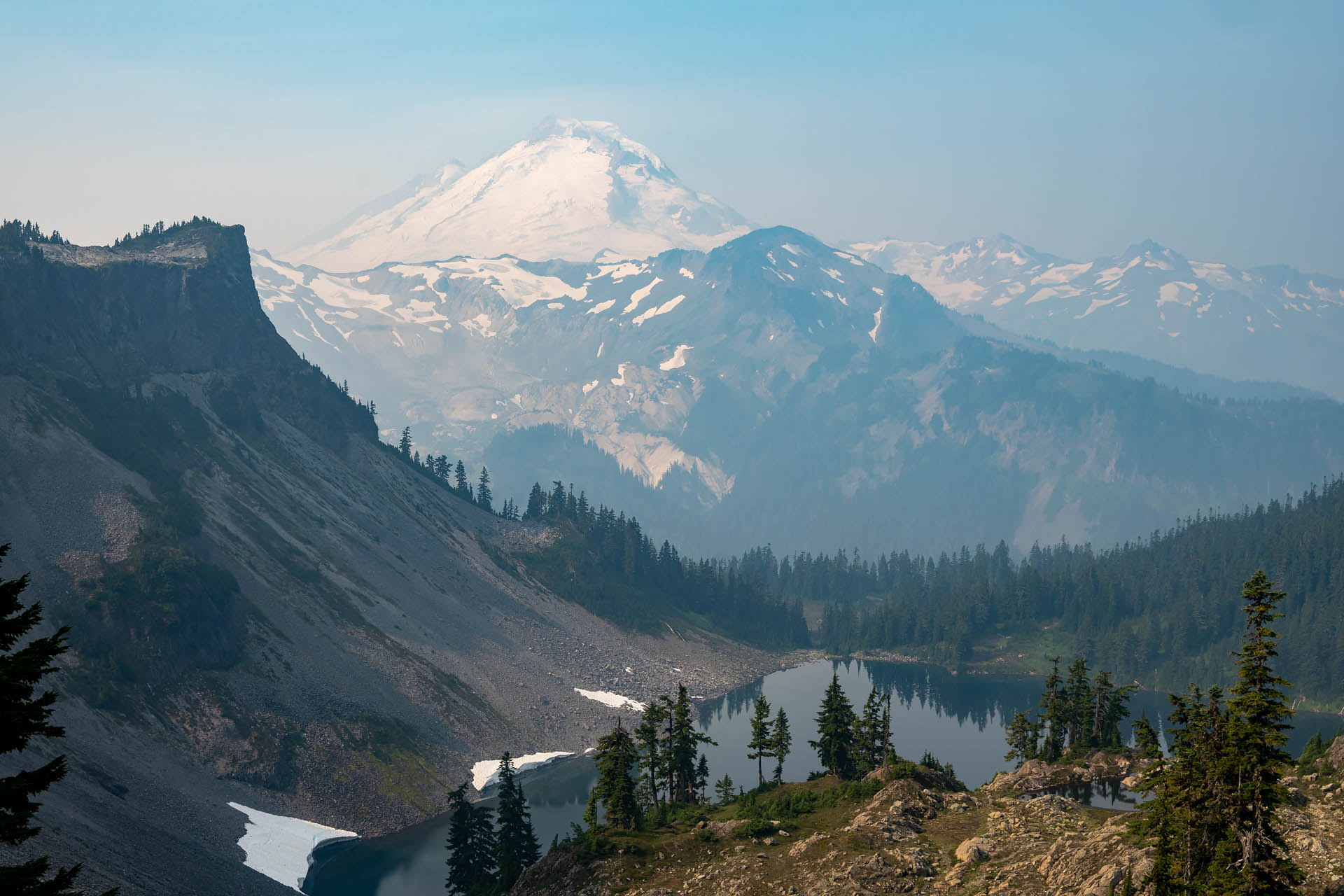 From Herman Saddle, the trail descends down to the shores of Iceberg and Hayes Lakes. As we came down through the forest and neared the lakes, we were unexpectedly greeted by a band of Canada Jays. Luckily, because we are never without peanuts or sunflower seeds, we’re always at the ready for our feathered friends. At least a dozen adults and scraggly juveniles chattered and swooped around us, enjoying a late-morning brunch as we looked on similarly enamored by their company. About fifteen minutes later, they’d cleaned us out of peanuts and we continued along the trail. 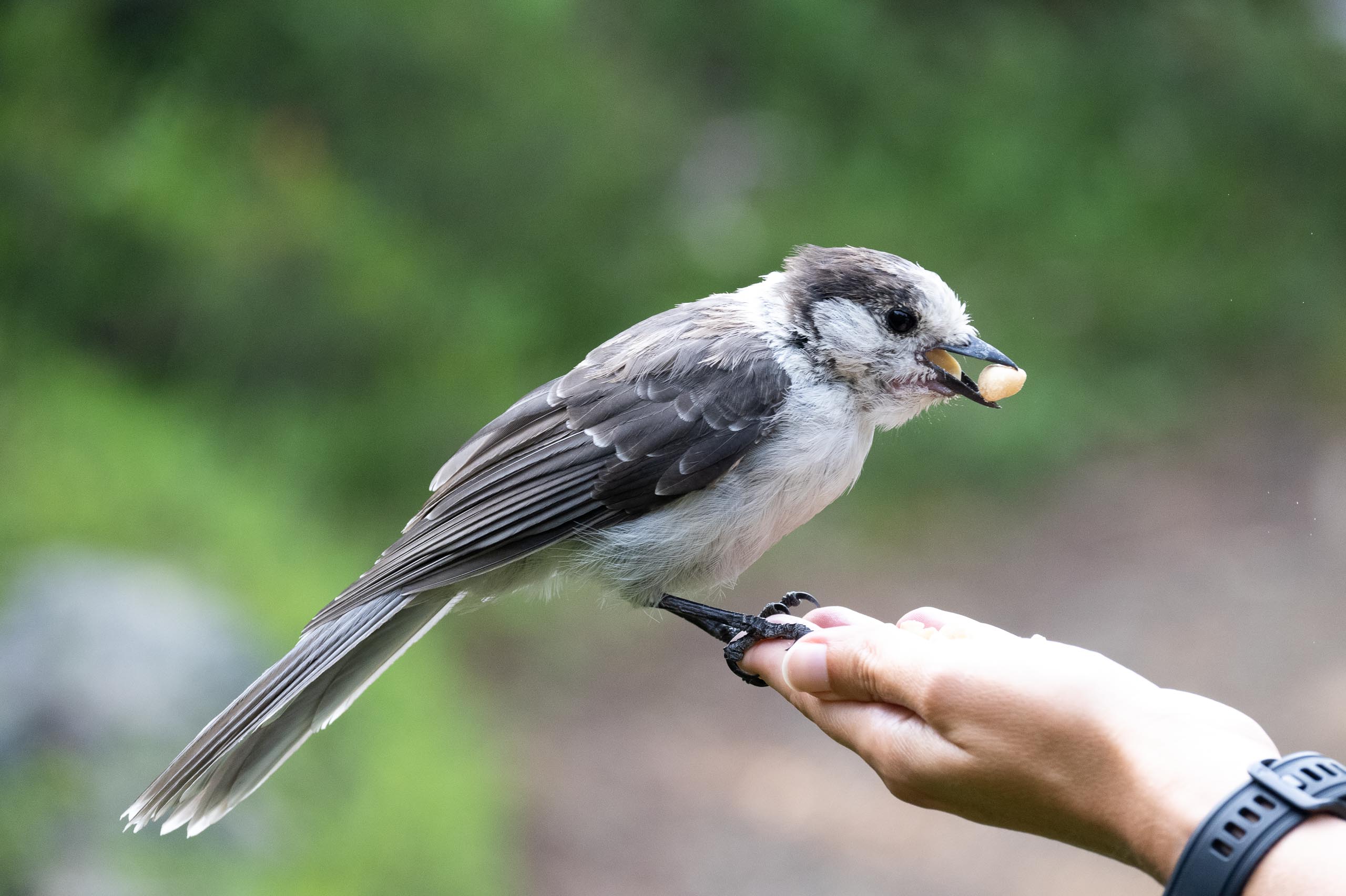 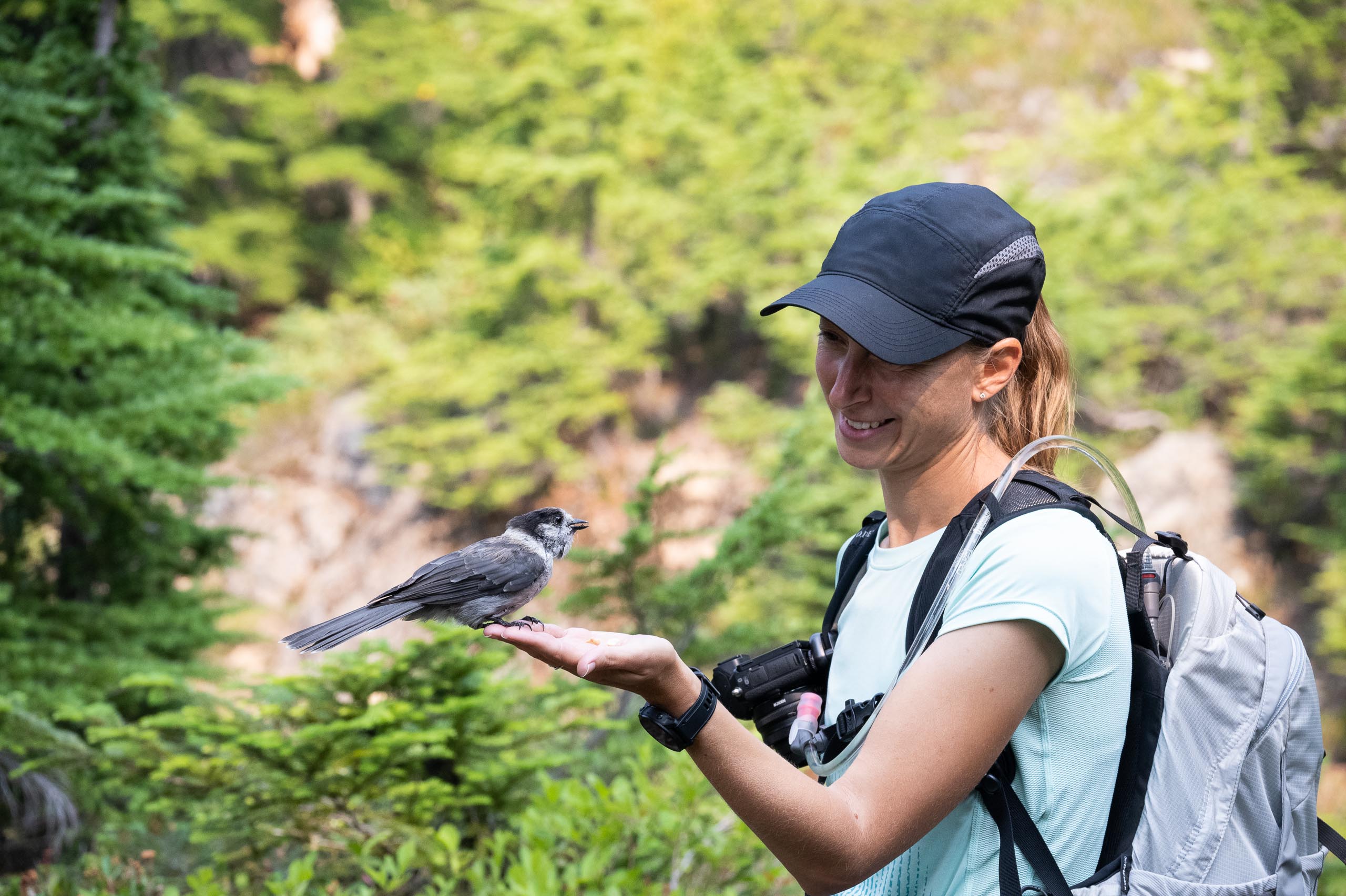 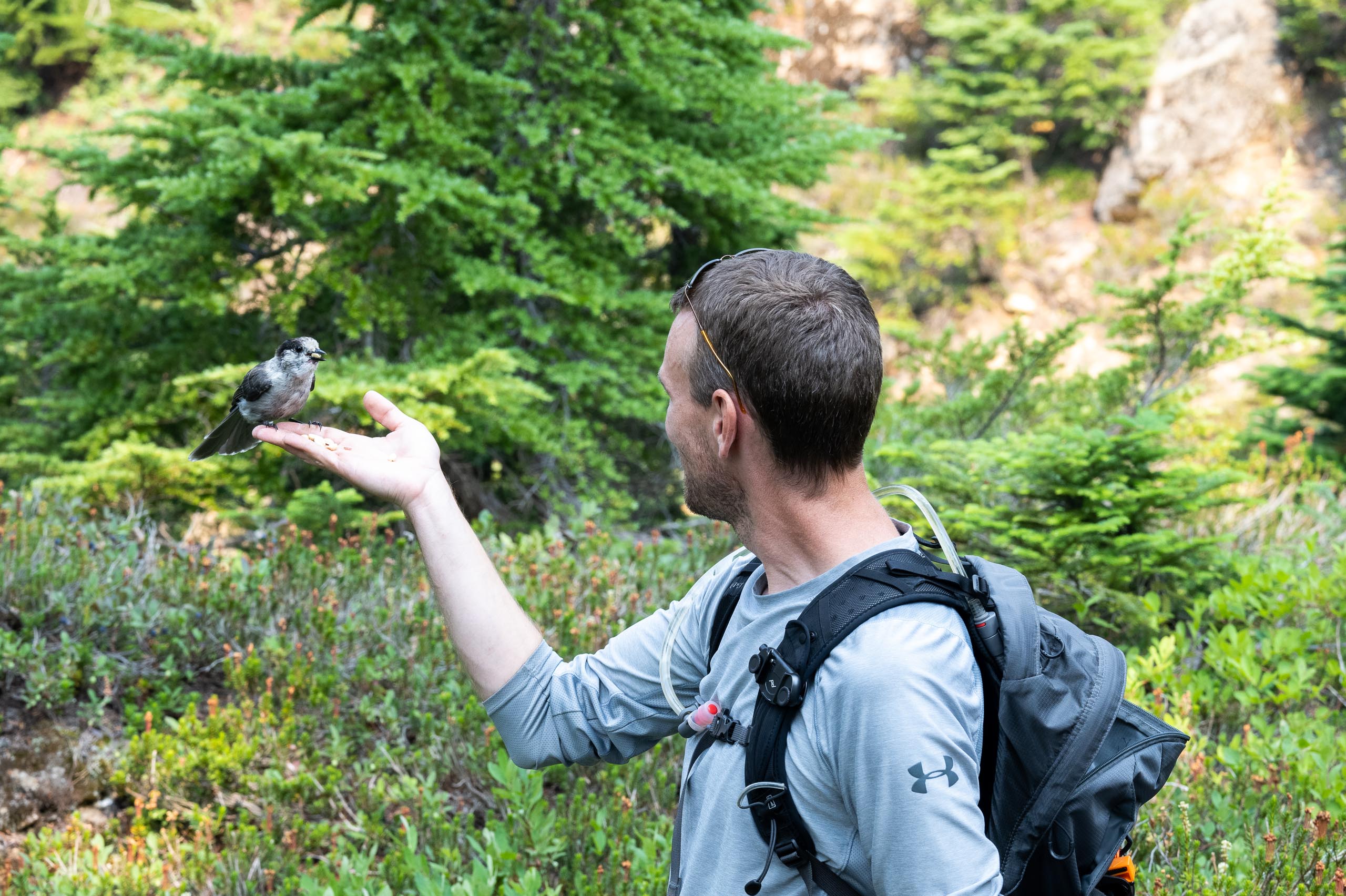 Passing along the western side of Iceberg Lake, we paused so Sanchez could enjoy a quick dip and a little stick chasing. The trail then skirted the edge of the comparatively small Mazama Lakes before making a gentle climb out of the basin.

After gaining the last bit of elevation, the trail wrapped around the southern end of Table Mountain. Here, it opened onto a ridgeline that intersected with the trail out to Ptarmigan Ridge. Continuing northeast around Table Mountain toward Artist Point, the open ridge offered sweeping views of Mt. Shuksan towering over the Swift Creek Valley. While the view of Mt. Shuksan is typically unbelievable, the increasingly dense wildfire smoke had all but thwarted any glimpse of the majestic crown. 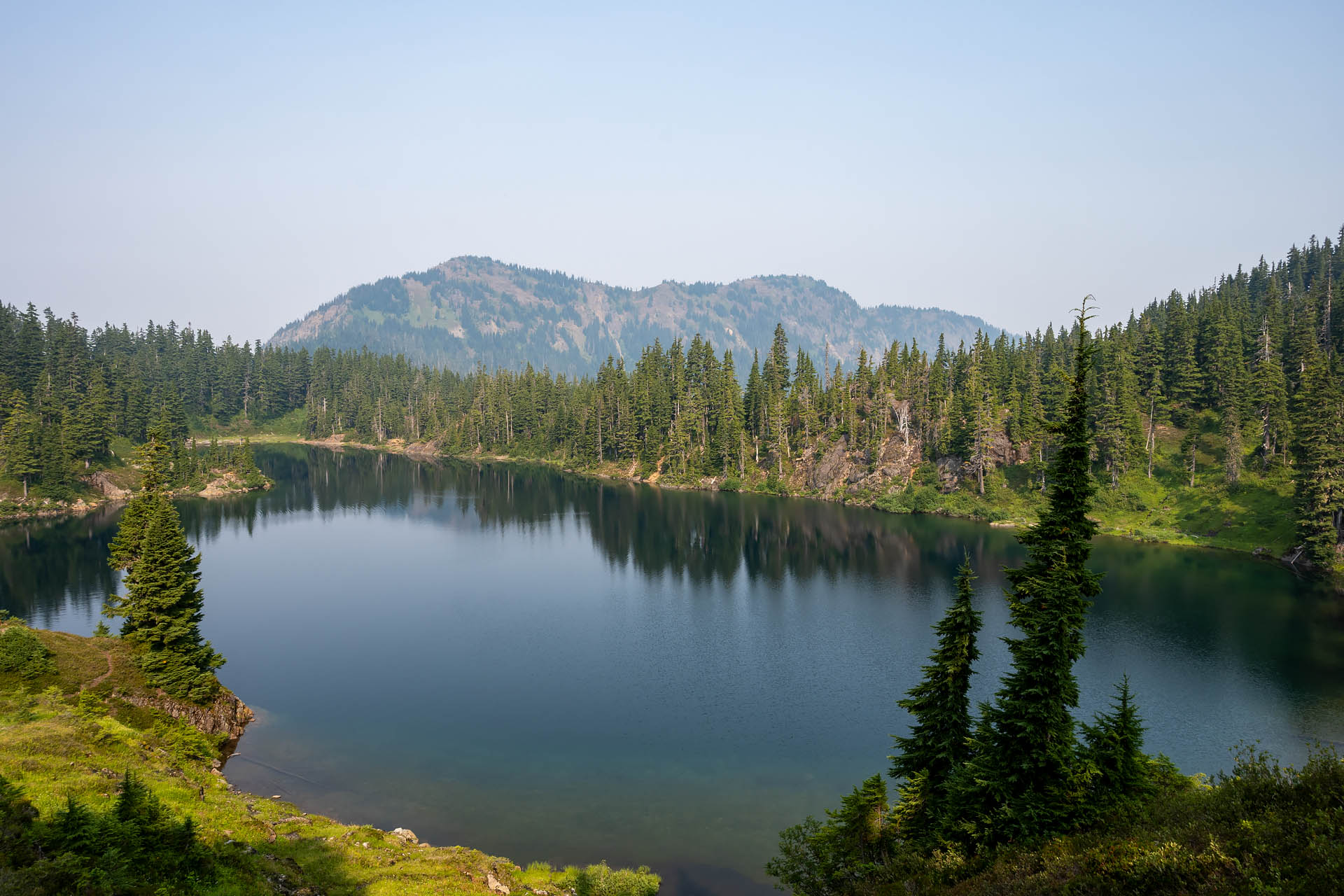 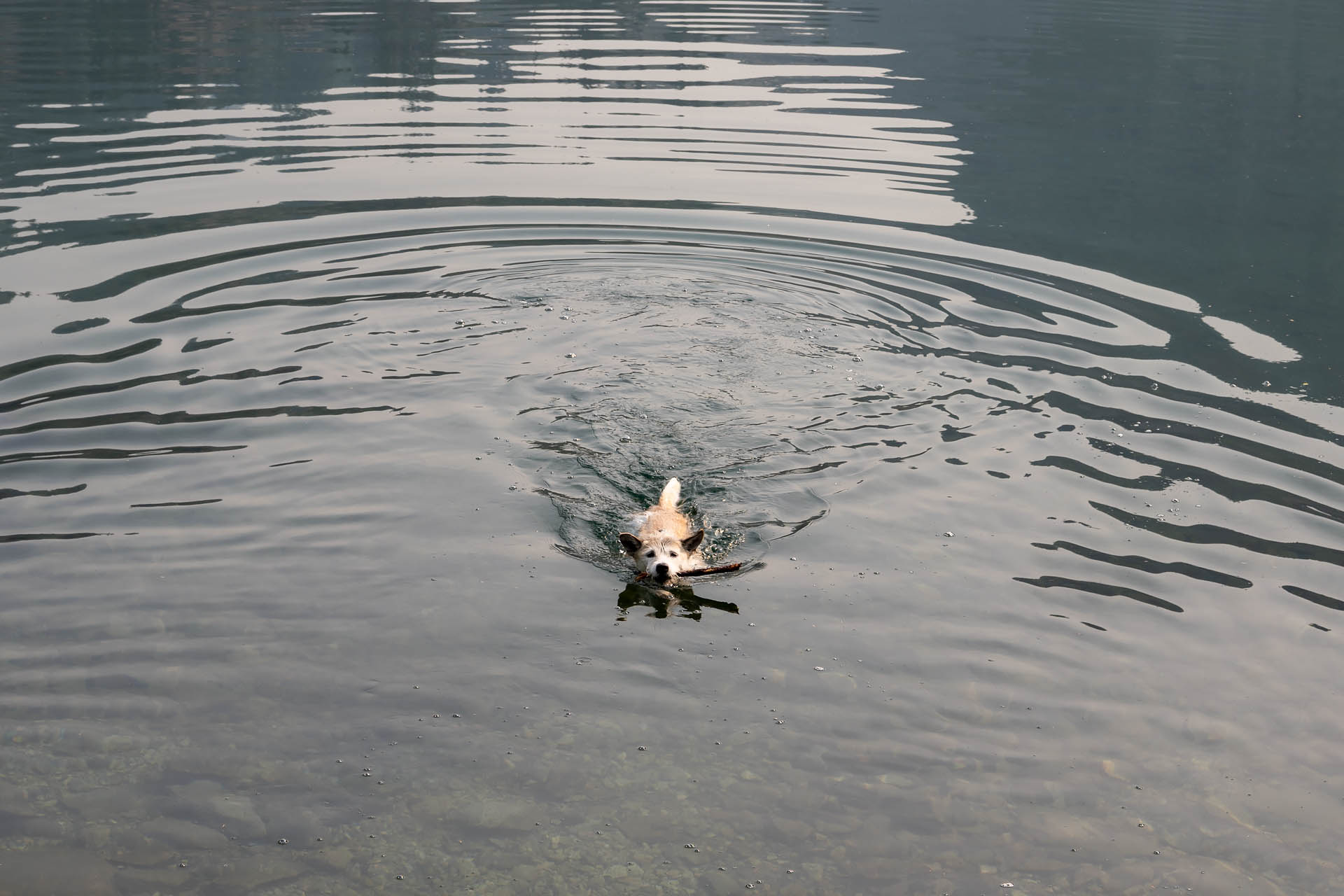 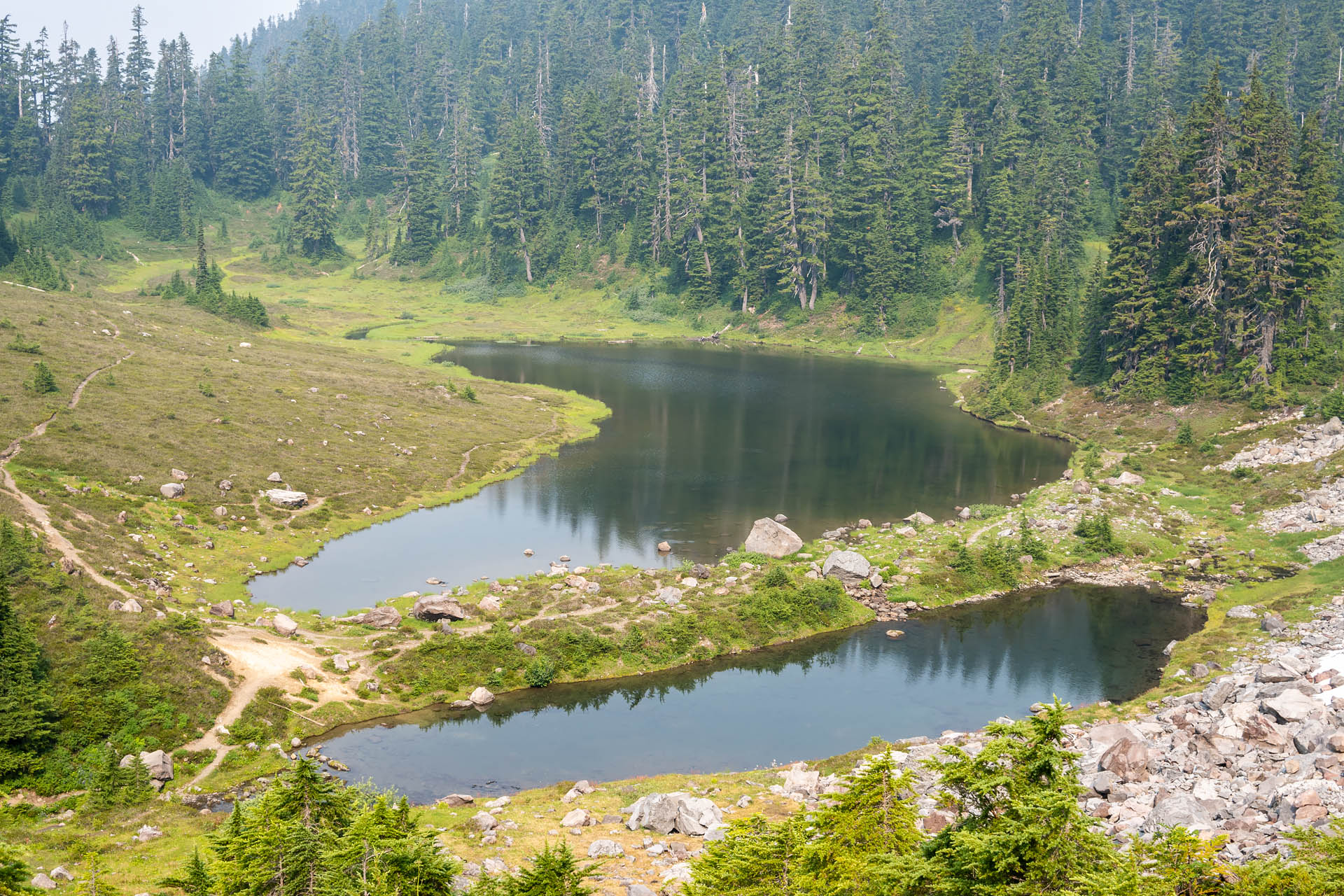 Upon reaching Artist Point, there’s the option for a side-trip to the top of Table Mountain. It’s about 2.5 miles roundtrip with a modest 700 feet of elevation gain and offers a slightly higher vantage point of Mounts Shuksan and Baker. If you’re hiking the Chain Lakes with your pup, it’s important to note that dogs are not allowed on this short spur trail. Because we had Sanchez, and certainly weren’t going to miss out on any sort of spectacular view, we skipped Table Mountain and made the mile-long descent back to Heather Meadows.

Had we actually been able to see through the outrageous amount of smoke, we may have favored this trail a bit more. Unfortunately, it proved difficult to get up here under ideal conditions. The summer hiking window had been shortened by a record-setting winter; then as soon as the snow melted, the Cascades were immediately razed by an unprecedented wildfire season. Smoke aside, the trail was also pretty heavily trafficked (especially around Artist Point) and lacked any sort of fun elevation gain. Moreover, the hike ended up taking us only three hours while our roundtrip driving time was about five hours. We weren’t entirely convinced the drive was worth it. 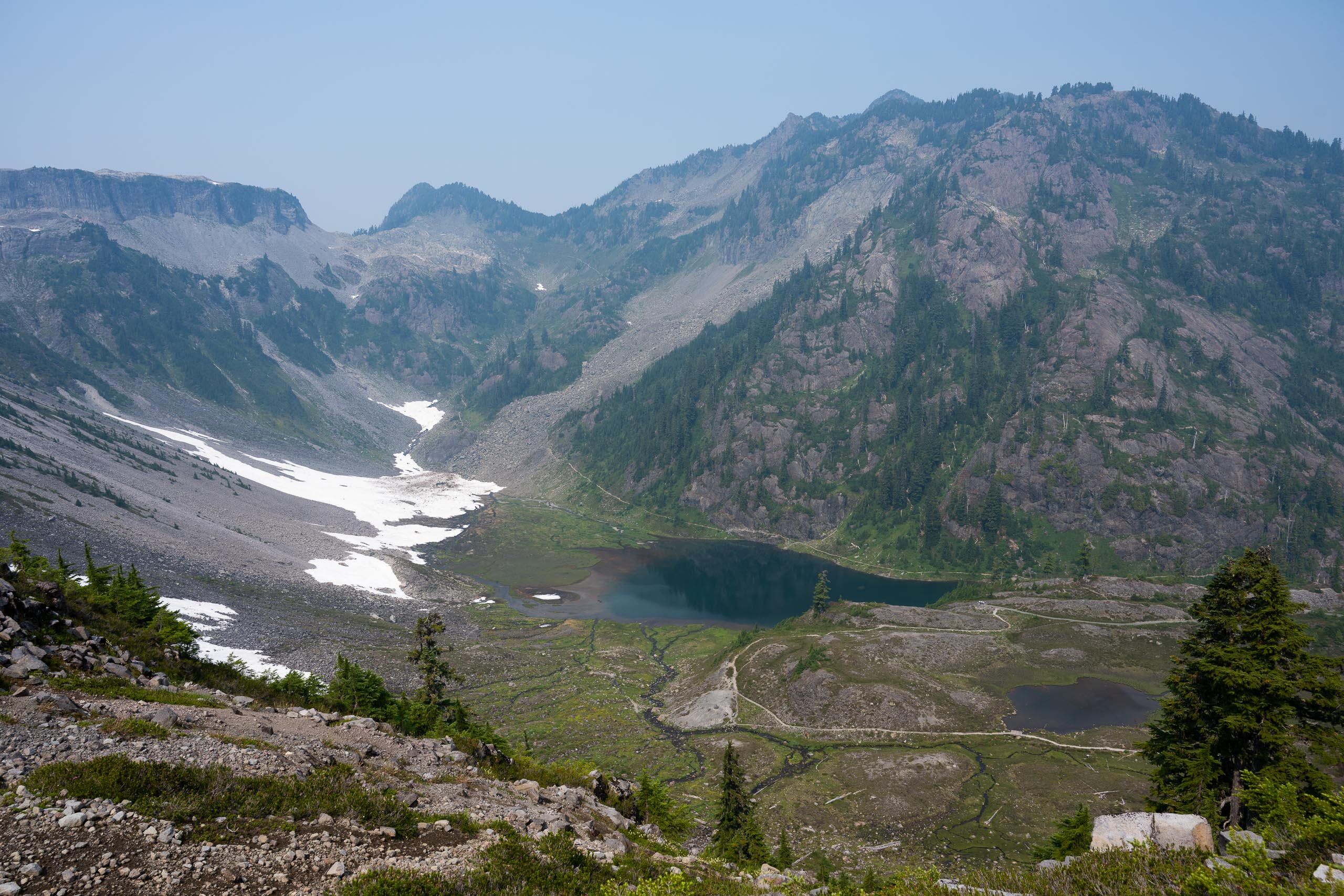 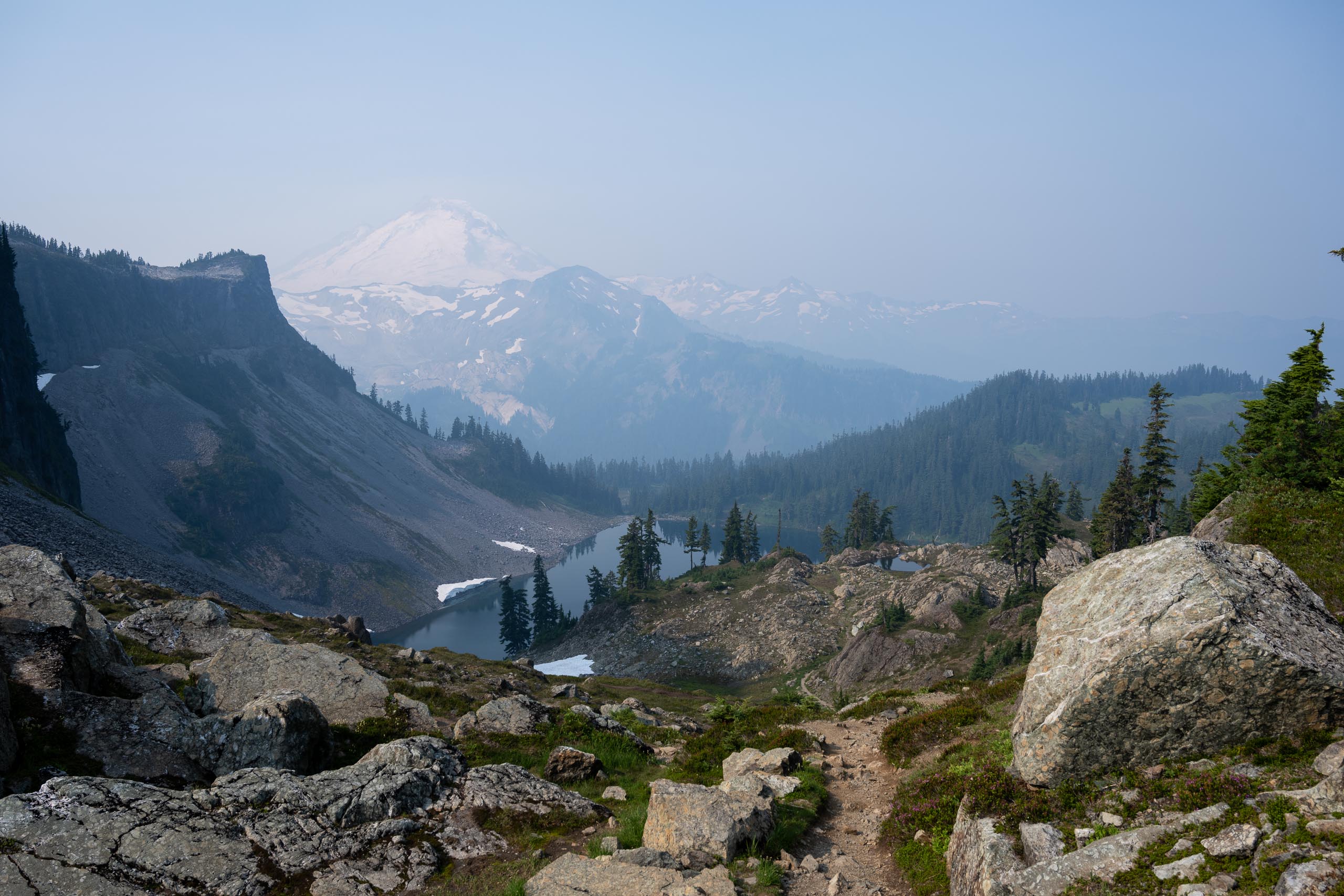 Final verdict: If we could have a redo on a clearer day, we would either skip Chain Lakes altogether and do Ptarmigan Ridge (11.6 miles roundtrip) or combine the two trails for a solid 13-mile outing. 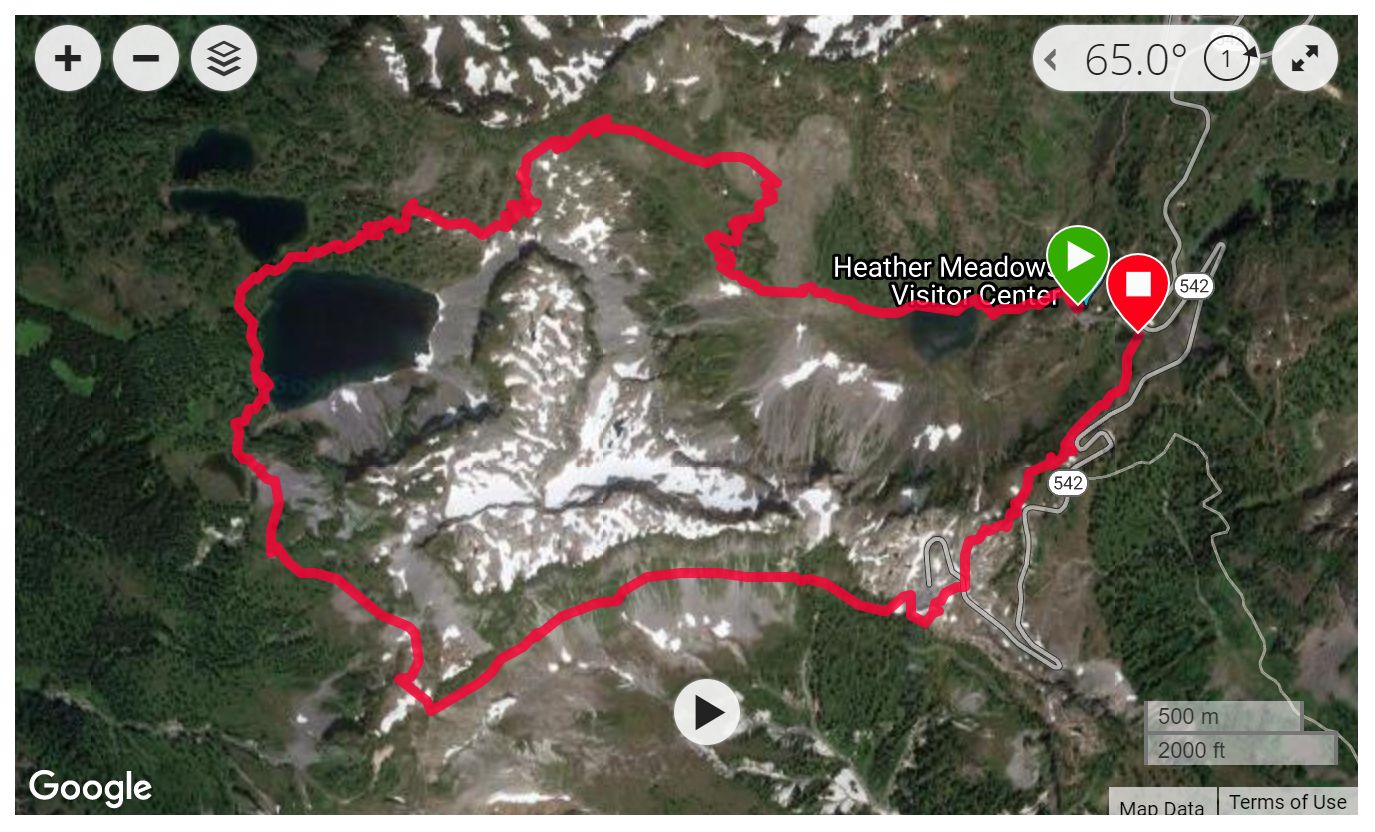