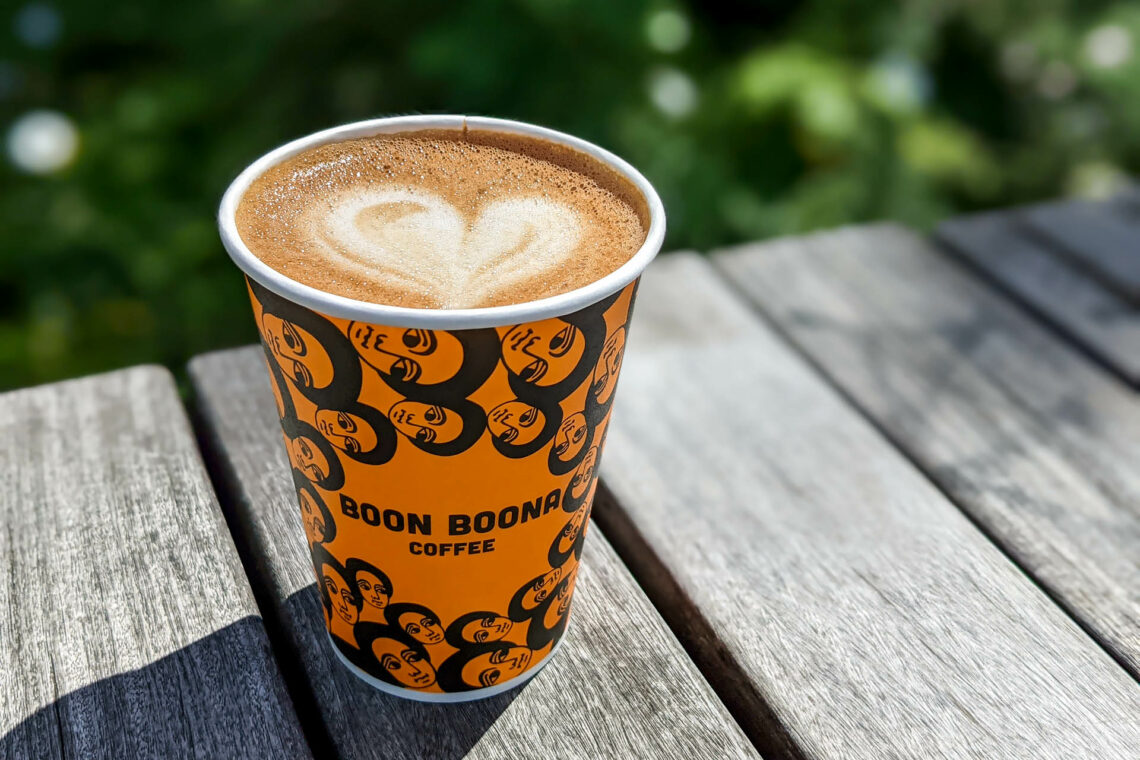 Seattle, Washington… the home of the Seahawks, Space Needle and, of course, Starbucks. Since its IPO nearly thirty years ago, the latter of the three icons has catapulted the city into the spotlight on the world’s coffee stage. As of 2020, Seattle boasts the second most coffee shops per capita in the United States, with fifty-six coffee shops per 100,000 people.

Today, Seattle’s coffee scene is so much more than the massive chain that started it all. Small, independently-owned, third-wave coffee shops with a focus on premium, sustainable roasts have taken over the city. There are so many cool shops that it’s overwhelming and, frankly, impossible to decide where to begin tasting. With hundreds of cafes and countless variations of ‘top ten coffee’ listicles, we barely scratched the surface during our three-month stay.

While we are by no means authorities on the city’s best brews, we still wanted to compile a list of our favorites. If you find yourself wandering the streets of Seattle looking for a great cup of Joe from a sustainably-minded small business, consider popping into one of these awesome local joints.

With two locations in Seattle’s Capitol Hill area, Espresso Vivace has been researching and roasting quality coffees for more than thirty years. Like other third-wave coffee shops, the team’s mission is grounded in sustainability and ethical farming practices. In addition to their emphasis on environmental and social ethics, Espresso Vivace also serves up some really nice brews. Apparently, Emeril Lagasse once touted the small Seattle coffee shop as having the ‘best coffee in the U.S., if not the world.’

This was the first coffee shop we visited in Seattle and one of our favorites. Not a big coffee drinker, Espresso Vivace introduced me to the humble café mocha made with plant-based milk (cue eyeroll from probably every coffee connoisseur out there). I don’t where that’s been all my beverage-oblivious life, but it will be my new coffee-based go-to for sure. Contrasting my coffee cluelessness, Stephan is a dedicated aficionado. He made a quick selection with the shop’s signature Café Nico – an espresso topped with a splash of orange, vanilla and cinnamon. He was instantly impressed, and handily declared this his favorite coffee-based drink in Seattle. 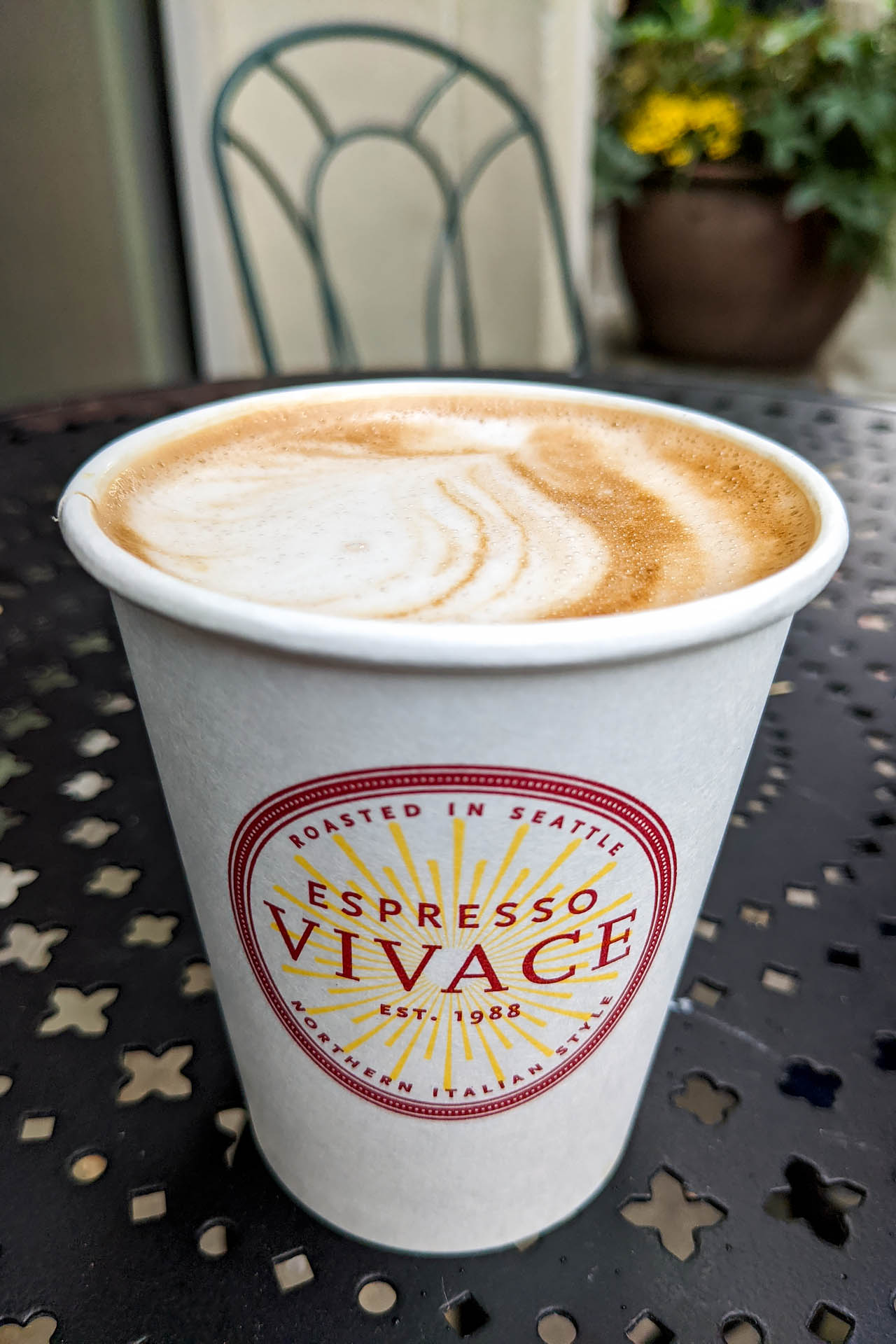 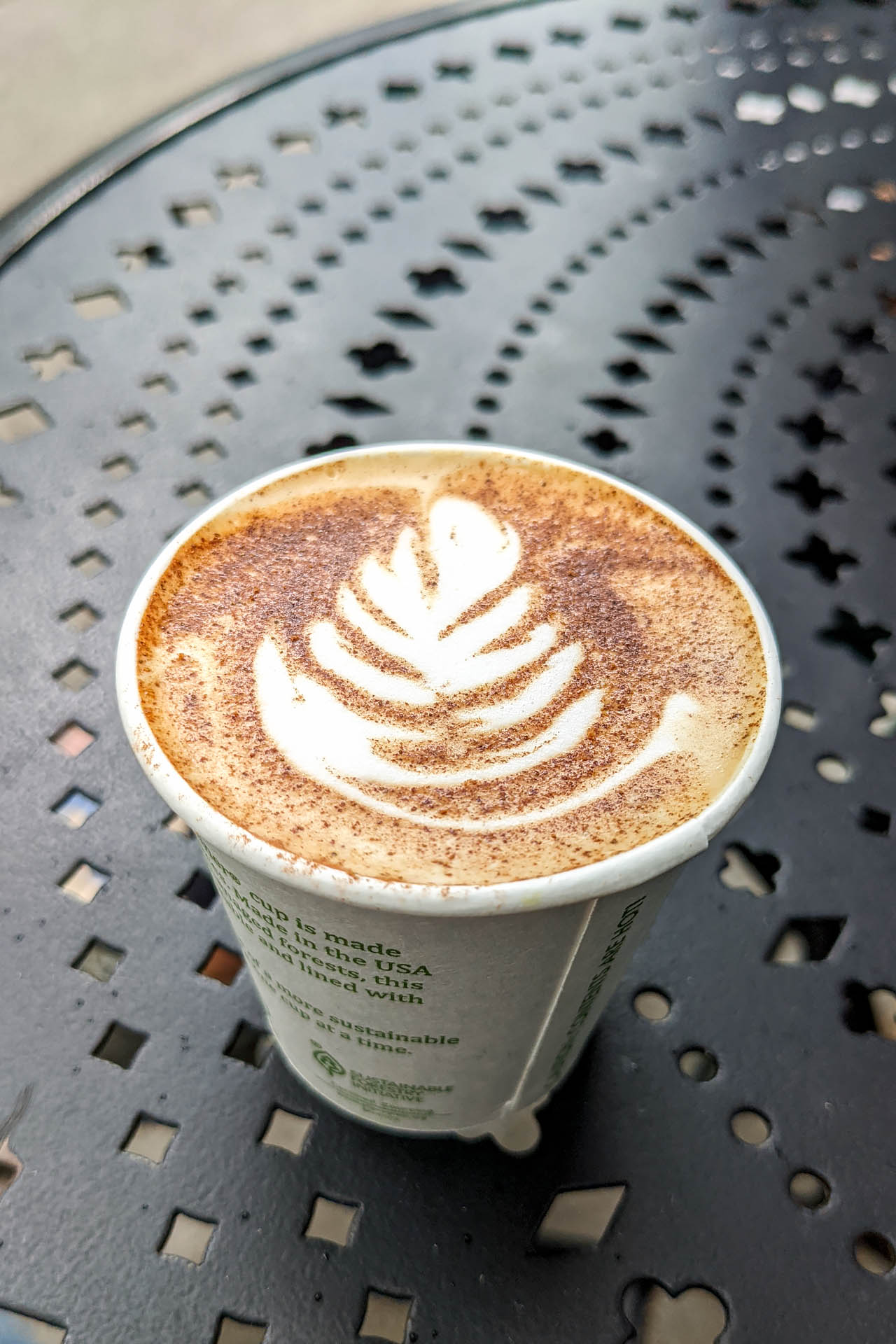 Named for two East African translations of ‘coffee,’ Boon Boona is a black-owned business whose founder has Eritrean roots. A 2011 trip to his homeland inspired owner Efrem Fesaha to turn his love for coffee into a career. Since it’s opening in 2018, Boon Boona has been celebrating traditional African coffee and sharing its rich heritage with local java lovers. The main roastery in Renton even offers patrons the unique experience of a traditional East African coffee ceremony. Boon Boona takes pride in roasting their own beans and is dedicated to collaborating with small farmers across a number of African nations, including woman-owner coffee growers. The business is also focused on supporting a number of social causes and marginalized groups.

While the main roastery is a bit of a drive from downtown Seattle, a new location recently opened near Seattle University. If you’re looking for an awesome cup of coffee, Boon Boona is the place. This was my favorite coffee stop in Seattle, and Stephan was equally impressed with his espresso. 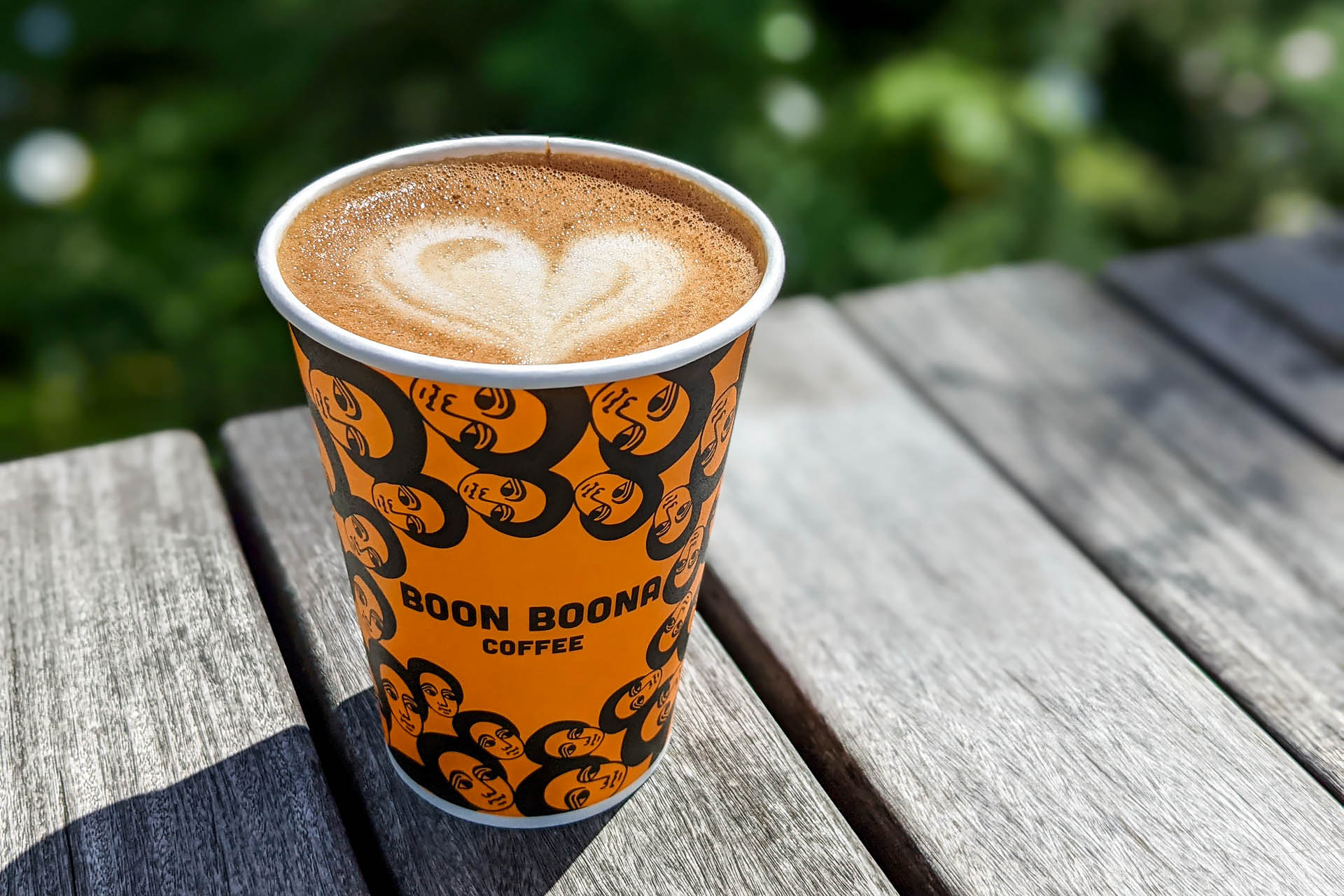 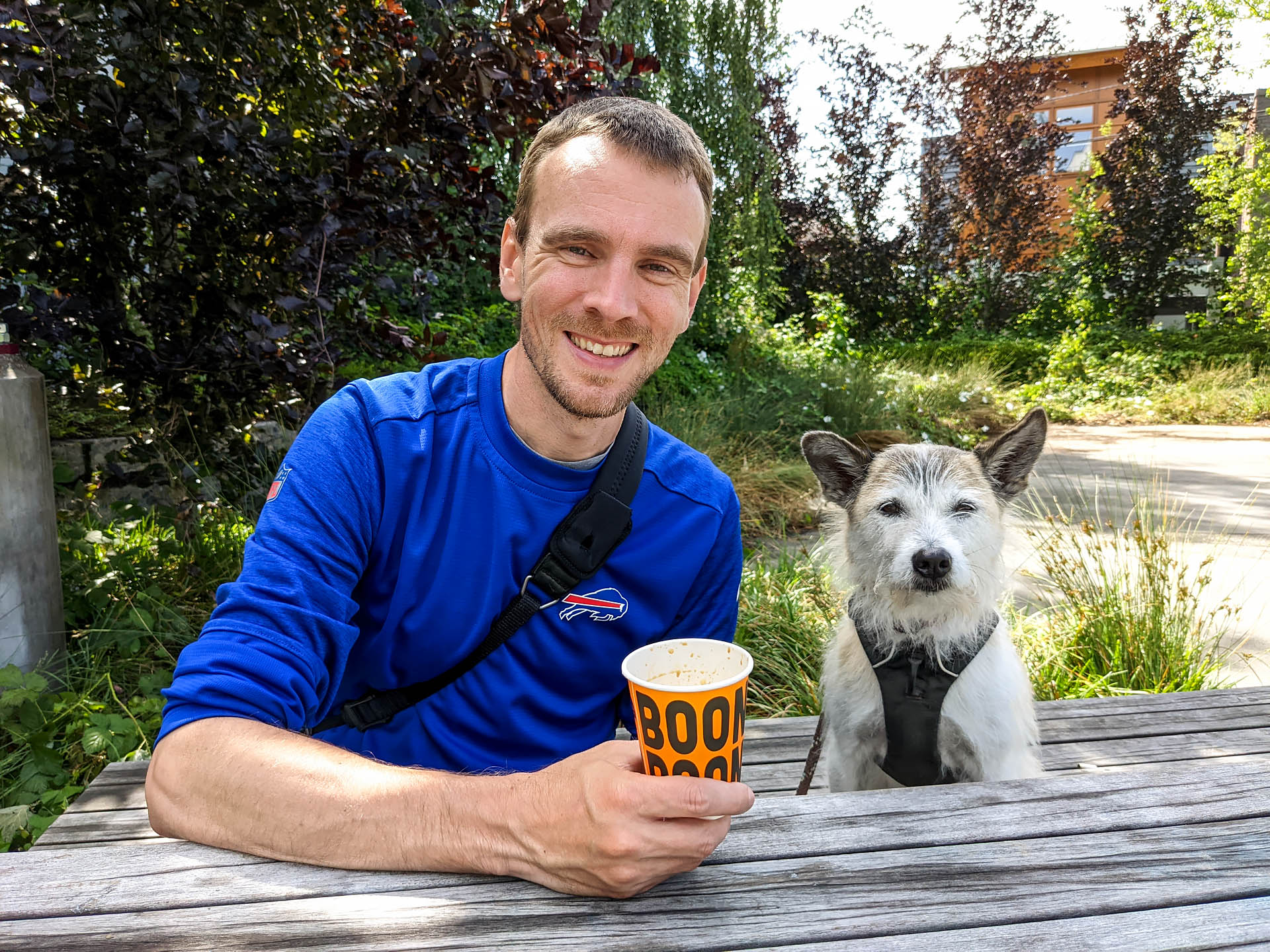 A tiny shop in the Capitol Hill neighborhood, Ghost Note Coffee features single-origin beans from their local partner, Broadcast Coffee Roasters. In addition to their menu of basics – coffee, espresso and tea – Ghost Note offers a handful of signature drinks, both mainstays and seasonal. They even boast a selection of interesting seasonal, house-made bitters (think scorched pear and ginger, or fig and cinnamon).

If you’re looking for a more unique coffee beverage, this is a great place to check out. Stephan opted for their signature Sun Ship – a cold espresso drink made with smoked grapefruit/rosemary syrup, coconut water, lime, and torched rosemary. Ever the unsophisticated one, I tried their spring soda – a blend of sparkling water, house-made peach bitters and orange blossom syrup. It may have been coffee-free, but it was wicked tasty. 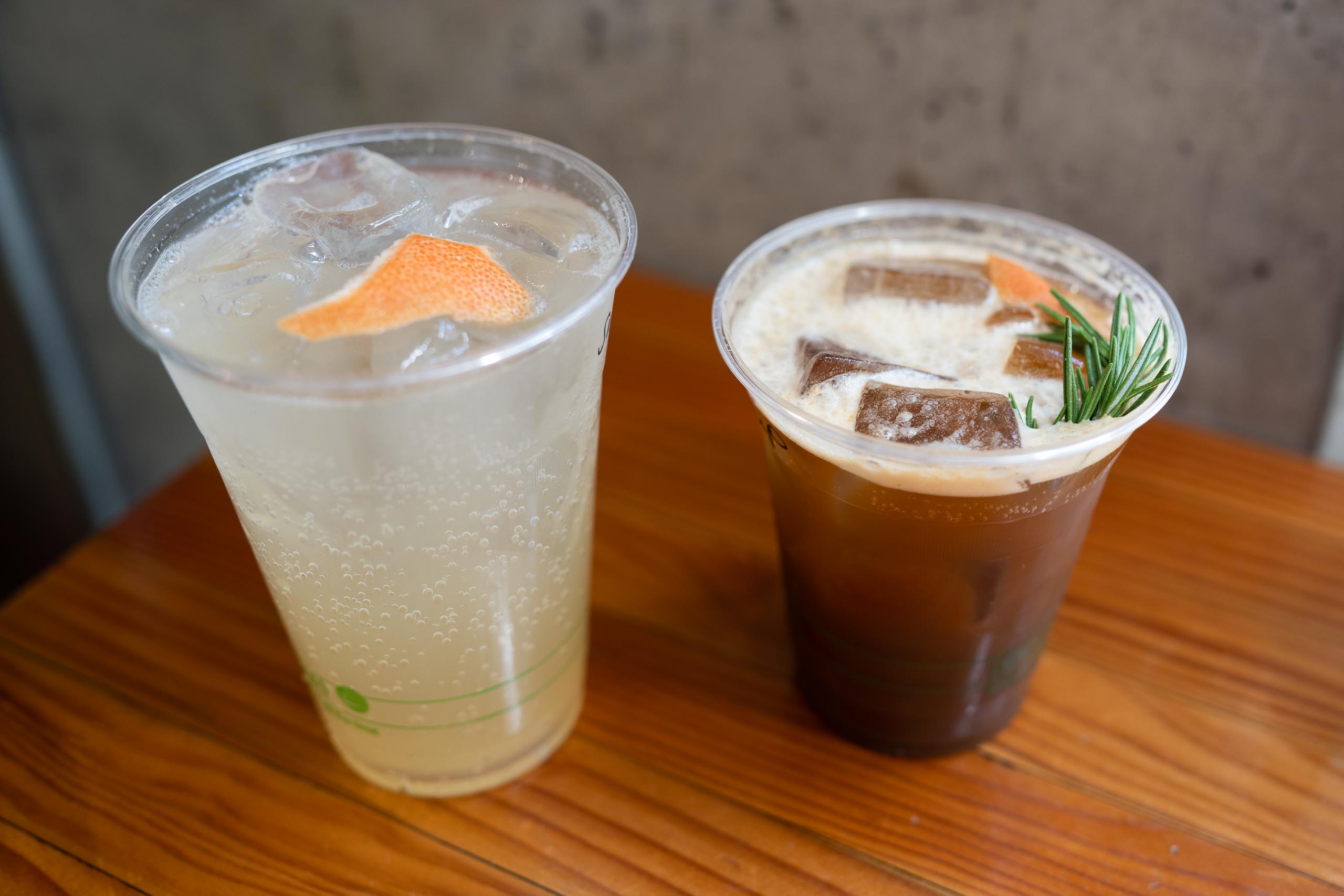 Located about 30 minutes north of Seattle in Everett, Café Makario is a great little hidden gem. It’s a bit more of a drive – about 30 to 40 minutes from the city center depending on traffic – but their drinks are totally worth it.

The shop is adorable, the drinks are gorgeously presented, and the owners are incredibly welcoming and happy to help you make a selection from their extensive menu. With it being such a hot day when we stopped by, I chose a refreshingly light berry juice. Stephan opted for one of their recommendations and customer favorites – the Einspanner. The Viennese coffee is served with fresh whipped cream and white chocolate shavings, and he was duly impressed with its rich flavor. 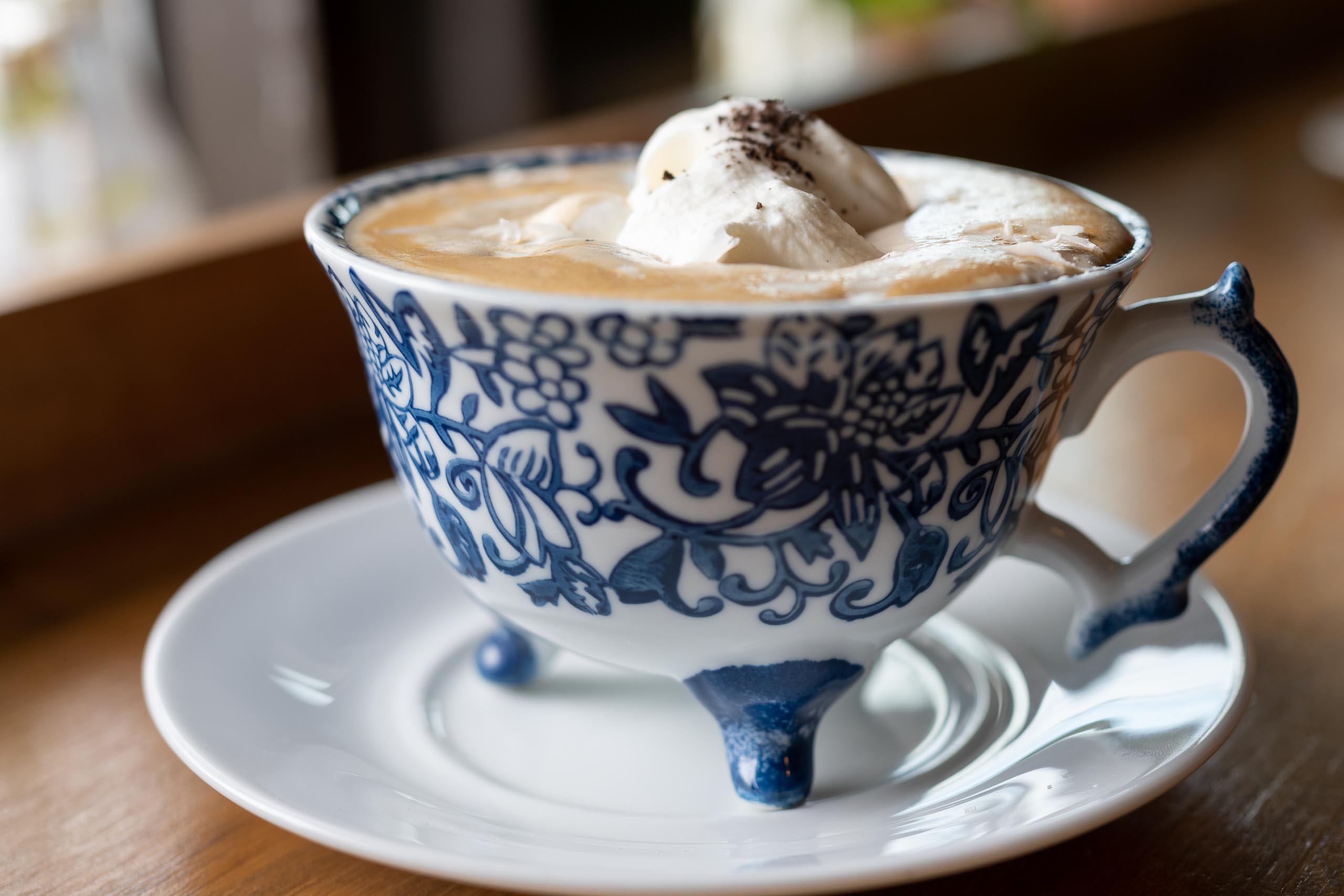 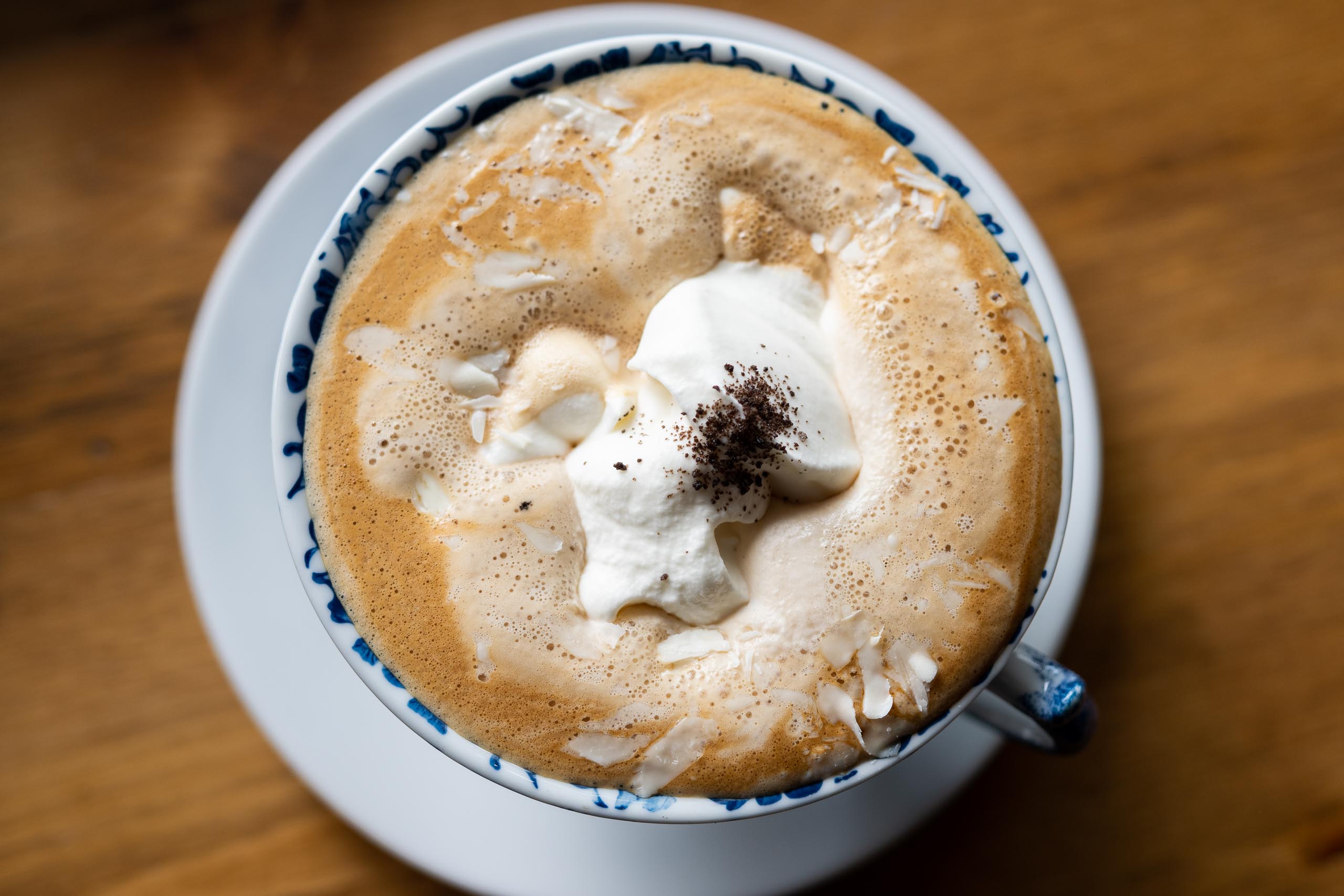 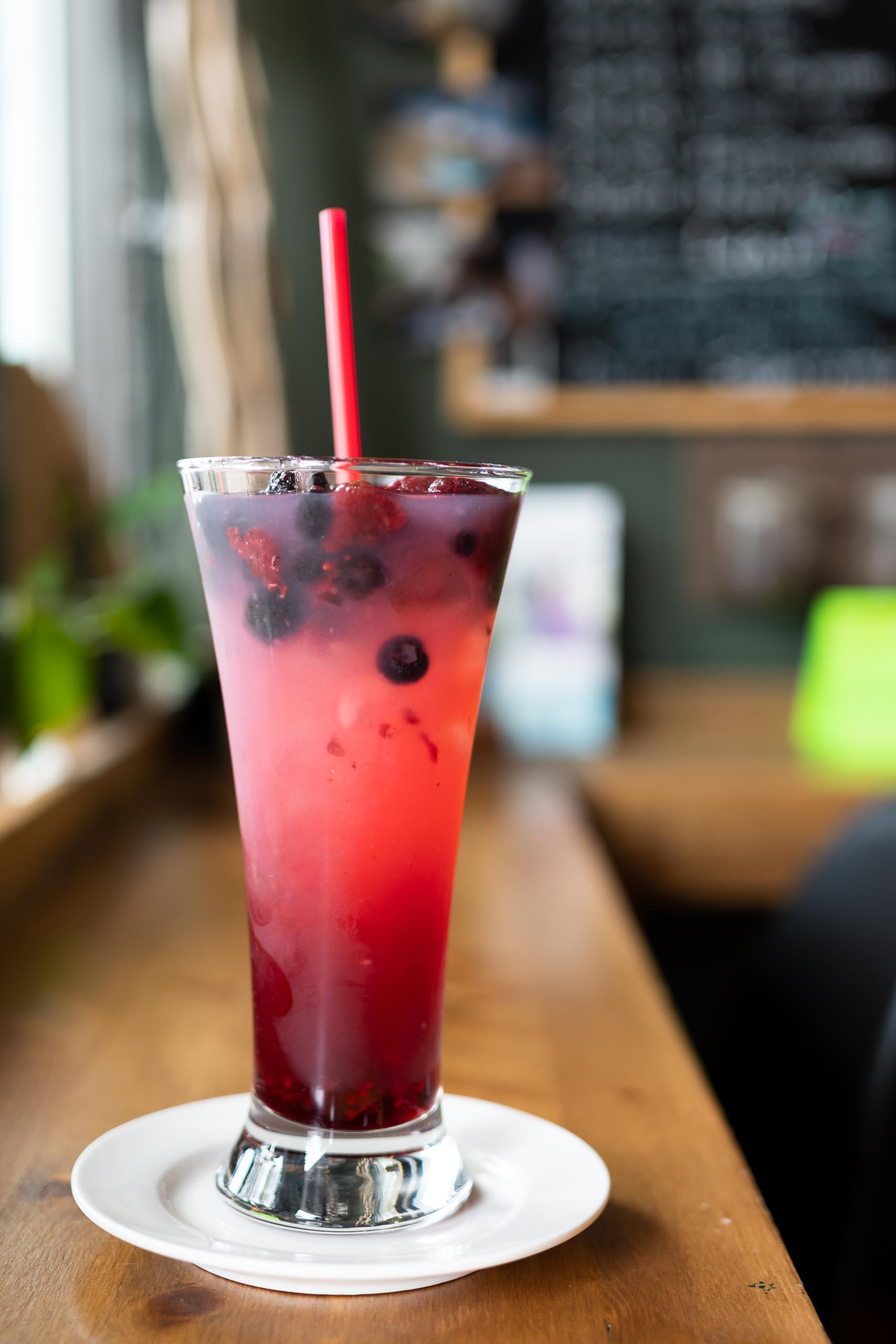 A super cute café that does their own roasting and brewing, Elm Coffee Roasters is conveniently located just a half mile from Lumen Field in historic Pioneer Square. We stopped in for a quick visit after a Seahawks preseason scrimmage, and loved the charm of the interior. Stephan grabbed an Americano and one of their yeasted cardamom buns, and was quite happy with his selection. 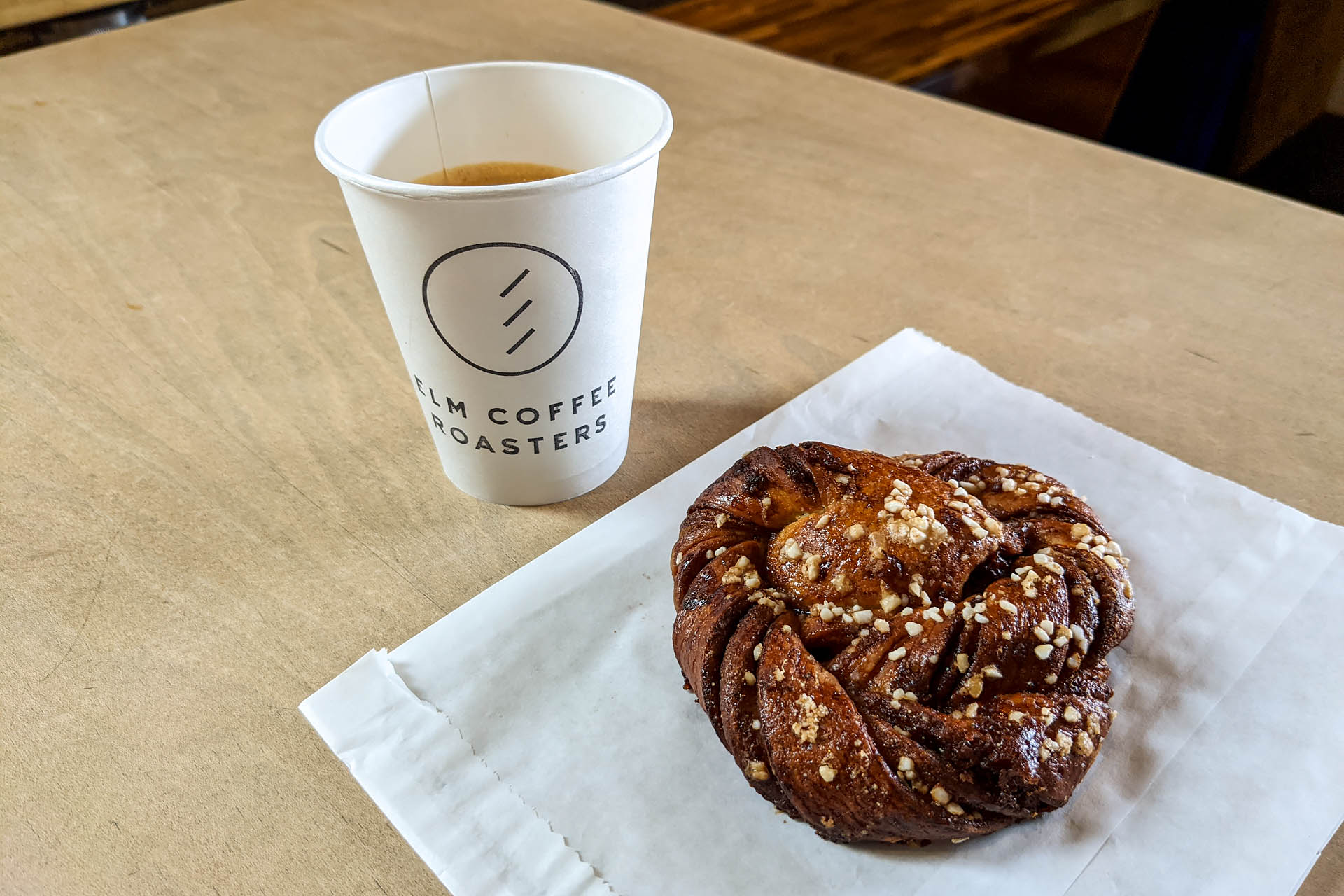 One of the older boutique coffee shops on this list, Victrola opened its first Capitol Hill location back in 2000. Since then, they’ve opened three additional cafes: a second location in Capitol Hill, a shop in Beacon Hill, and one in downtown Seattle. Victrola does its own roasting and coffee prep, and offers both single-origin beans and blends as well as weekly or monthly coffee subscriptions.

We visited their 15th Ave café, which was unassumingly cute. Stephan had a cortado which he enjoyed, while I had a café mocha that I ranked as decent but not extraordinary. Though I’m certainly no coffee expert, I thought it kind of lacked that rich, bold flavor of the equivalent drink I sampled at Boon Boona. 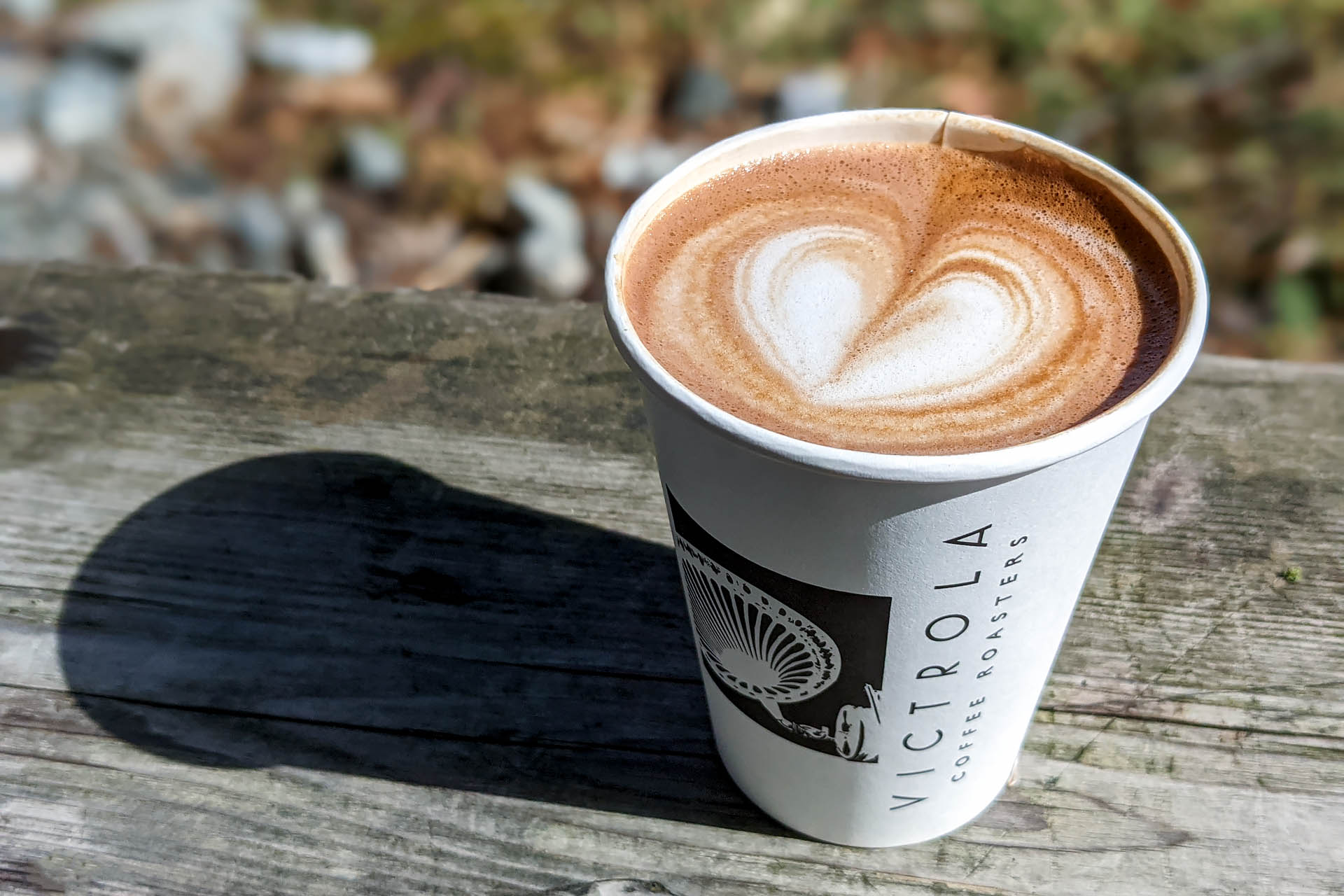 Broadcast Coffee has been serving up premium roasts in Seattle for over a decade. In 2008, the founder, Barry Faught, decided to leave the grind of corporate life to pursue his love of coffee. He named the business in honor of his dad – a locally-famous radio DJ in their hometown of Boise, Idaho – and has since been chasing his dream to ‘spread love and delicious drinks.’ Broadcast Coffee mindfully supports the global coffee farming community, and offers a rotating selection of about a dozen different single-origin beans and blends both online and in-store.

With three locations scattered around the city, we visited their partner, Temple Pastries, in the Leschi neighborhood. If you’re going to have a cup of coffee, you may as well find some scratch-made baked goods to pair with it, right? In addition to a heaping box of pastries, Stephan grabbed a bag of their Kenya Karatu Peaberry beans. The coffee boasted not only bold notes of blood orange and raspberry, but also a plethora of awards – including honors for high payments to farmers, clean water production, and solar energy use. 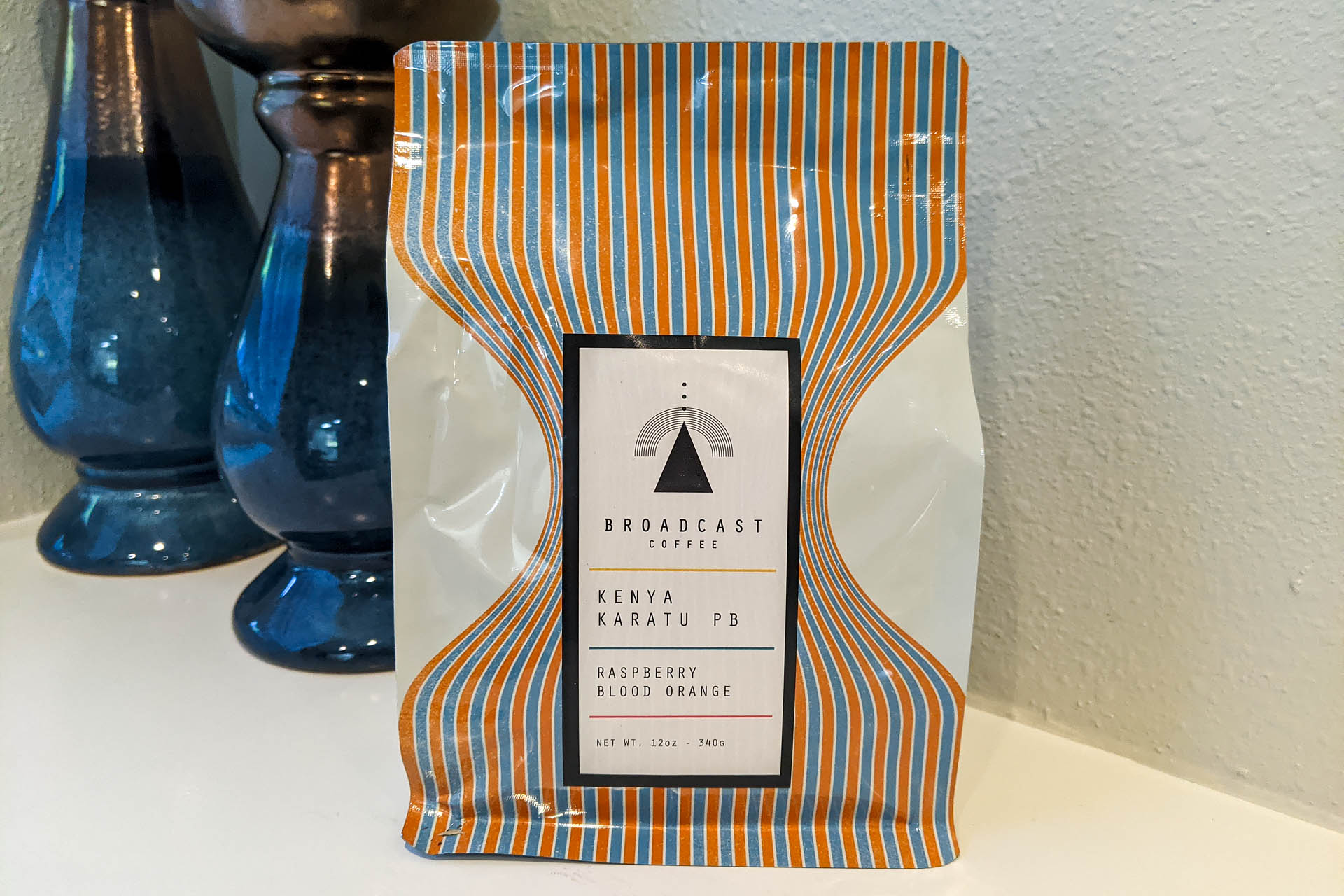 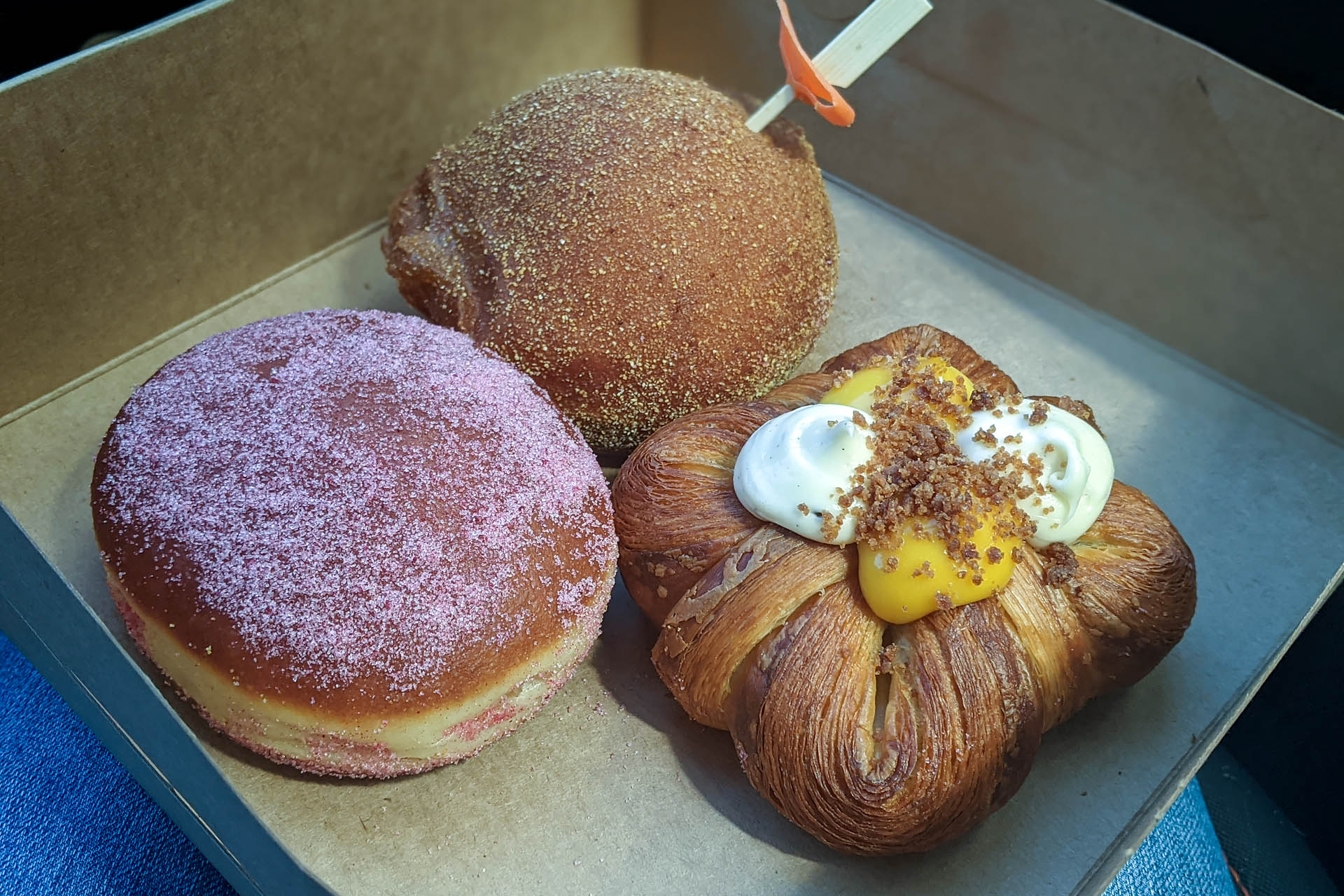 Okay, this pick is not a dedicated coffee shop, but we’d be remiss not to include it on our list of favorites. Located down in Hillman City, Flour Box is arguably the hottest new donut shop in Seattle. Opened at the height of the COVID pandemic in October 2020, the Flour Box began with a self-taught baker and an online Kickstarter campaign. In the year since its opening, it has absolutely exploded in popularity… and for good reason. The scratch-made brioche donuts and accompanying beverages are made entirely with fresh, local ingredients and are not just delicious – they are like little works of art. They don’t roast their own coffee in house, however Anchorhead Coffee (their partner and local roaster) provides the base for their whimsical beverages.

As Stephan’s official Donut and Coffee Wench, I made several Thursday morning trips to Flour Box during our stay in the Seattle area. The drinks that Stephan loved most were the Alpine Brew and Cabin Fever. The former is an espresso with steamed milk and house-made rosemary, sage and vanilla bean syrup. The latter is an espresso with steamed milk, house-made burnt honey and pure maple syrup. There are about seven drinks on their menu; all can be made with milk alternatives, most can be served either hot or cold, and even all of their syrups are house-made. Our only wish was that we’d stayed in town long enough to sample their mulled cider with cinnamon and orange. It’s hard to believe, but that drink actually began outselling their coveted donuts!

Before you visit, there is one thing you should prepare for: there’s an exceedingly good chance you’ll have to wait in line (perhaps even for one to two hours) to try one of their signature drinks or donuts. Additionally, they are only open Thursday through Sunday. That said, everything they make is TOTALLY worth the wait. A trip to Flour Box is more than just a pit stop for coffee… it’s an experience! Pro tip: get there early (at least thirty minutes before opening) to ensure you get to try everything. If this little blurb doesn’t entice you, check out their Instagram feed. Awesome owner, awesome story, awesome products, awesome place! 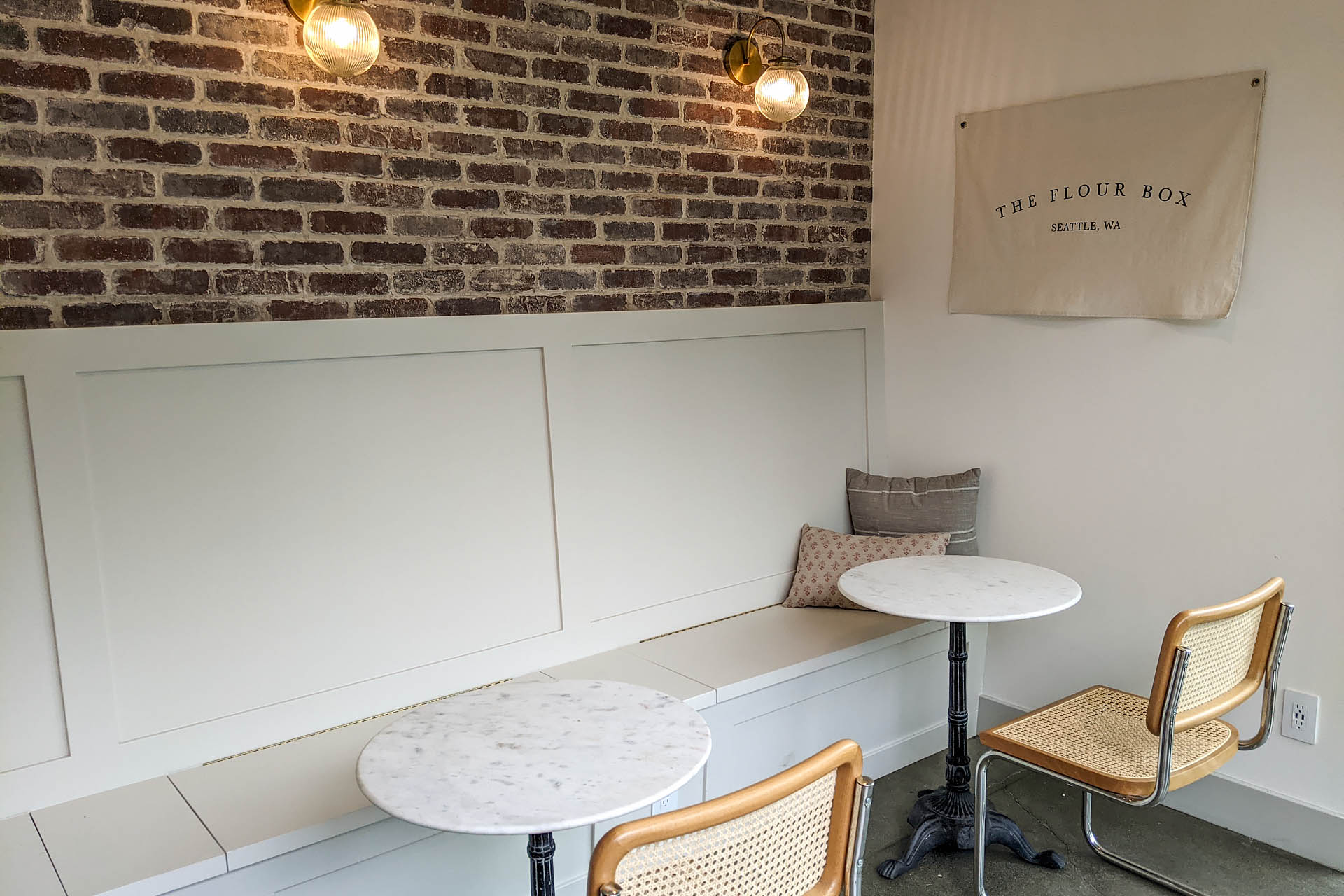 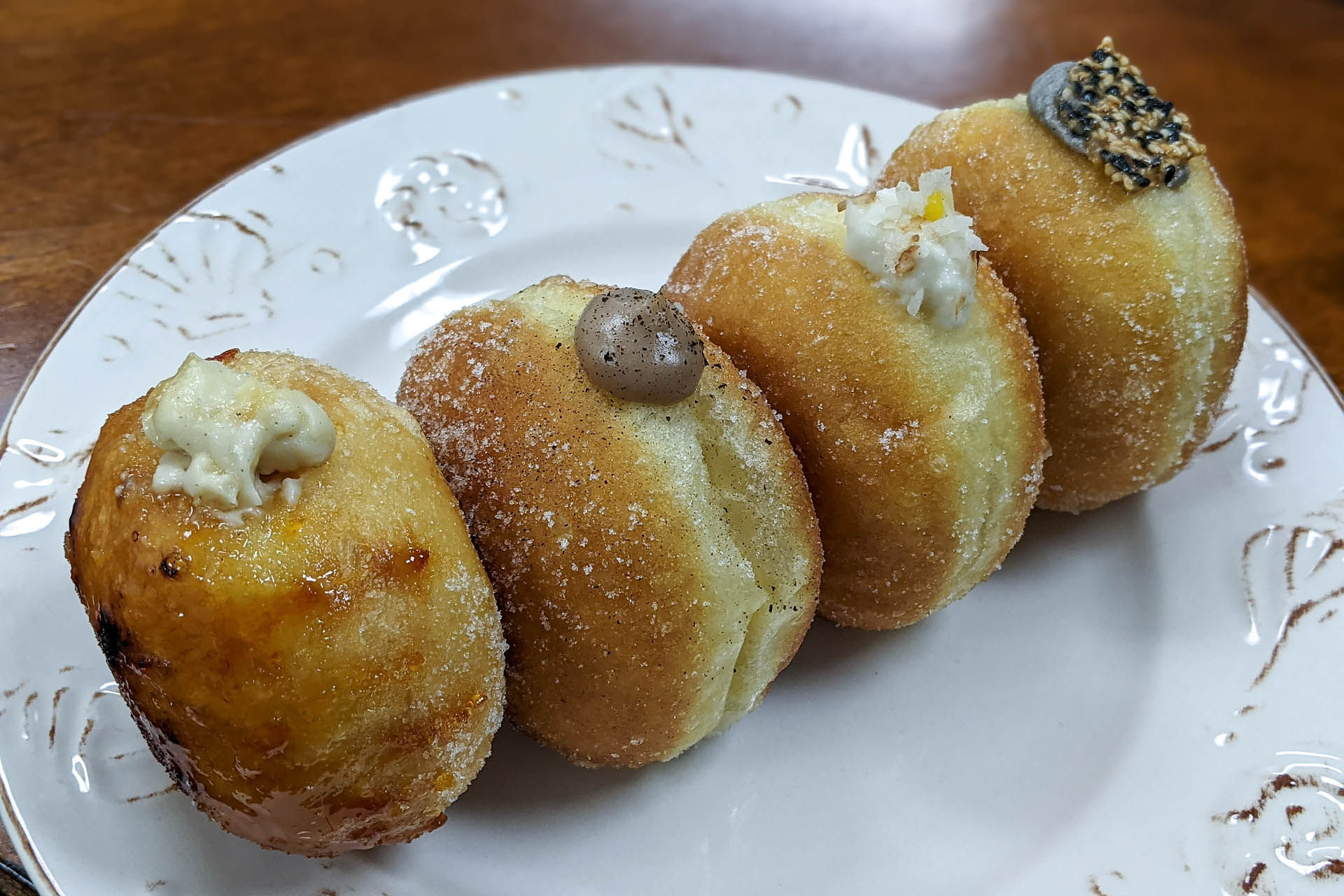 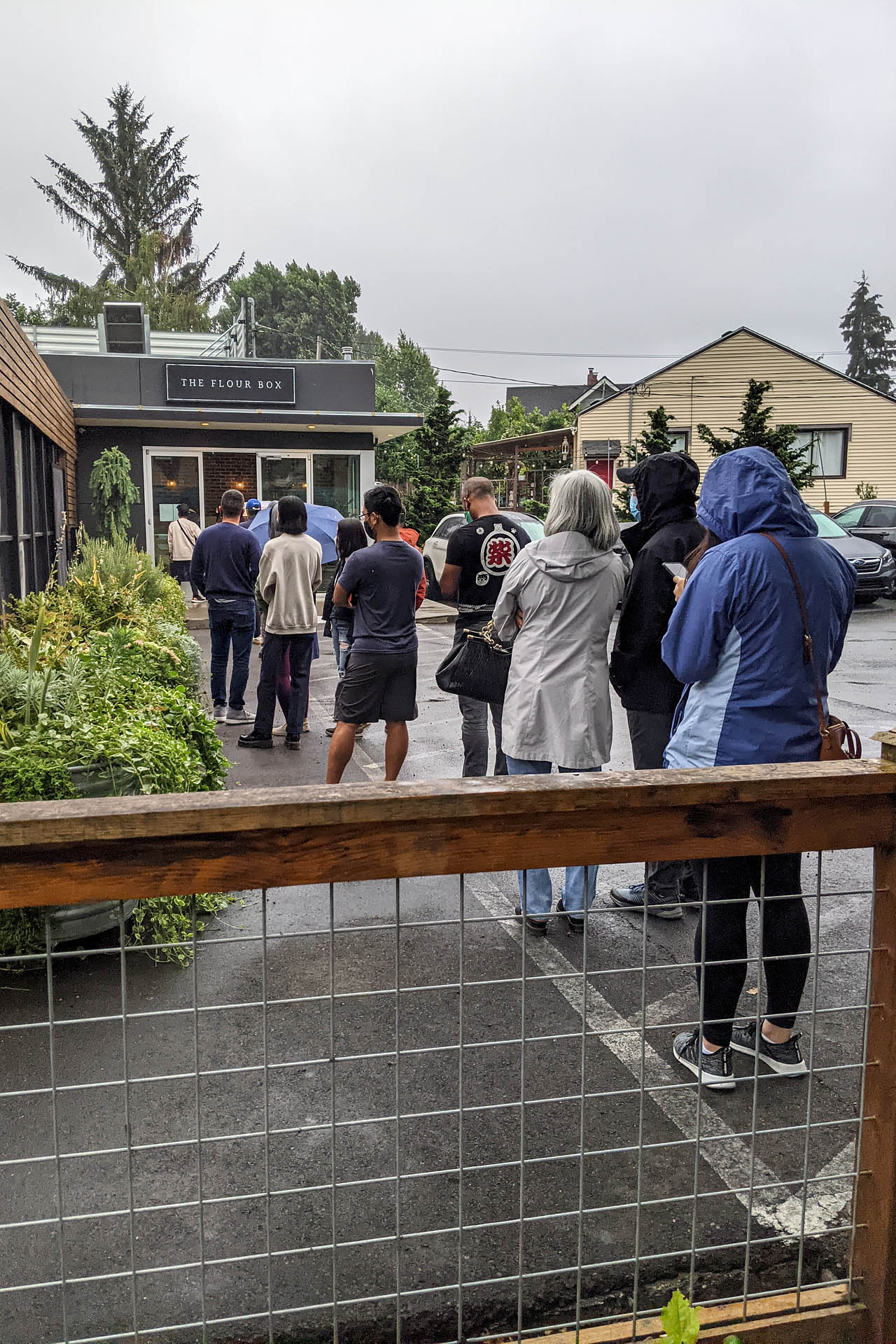 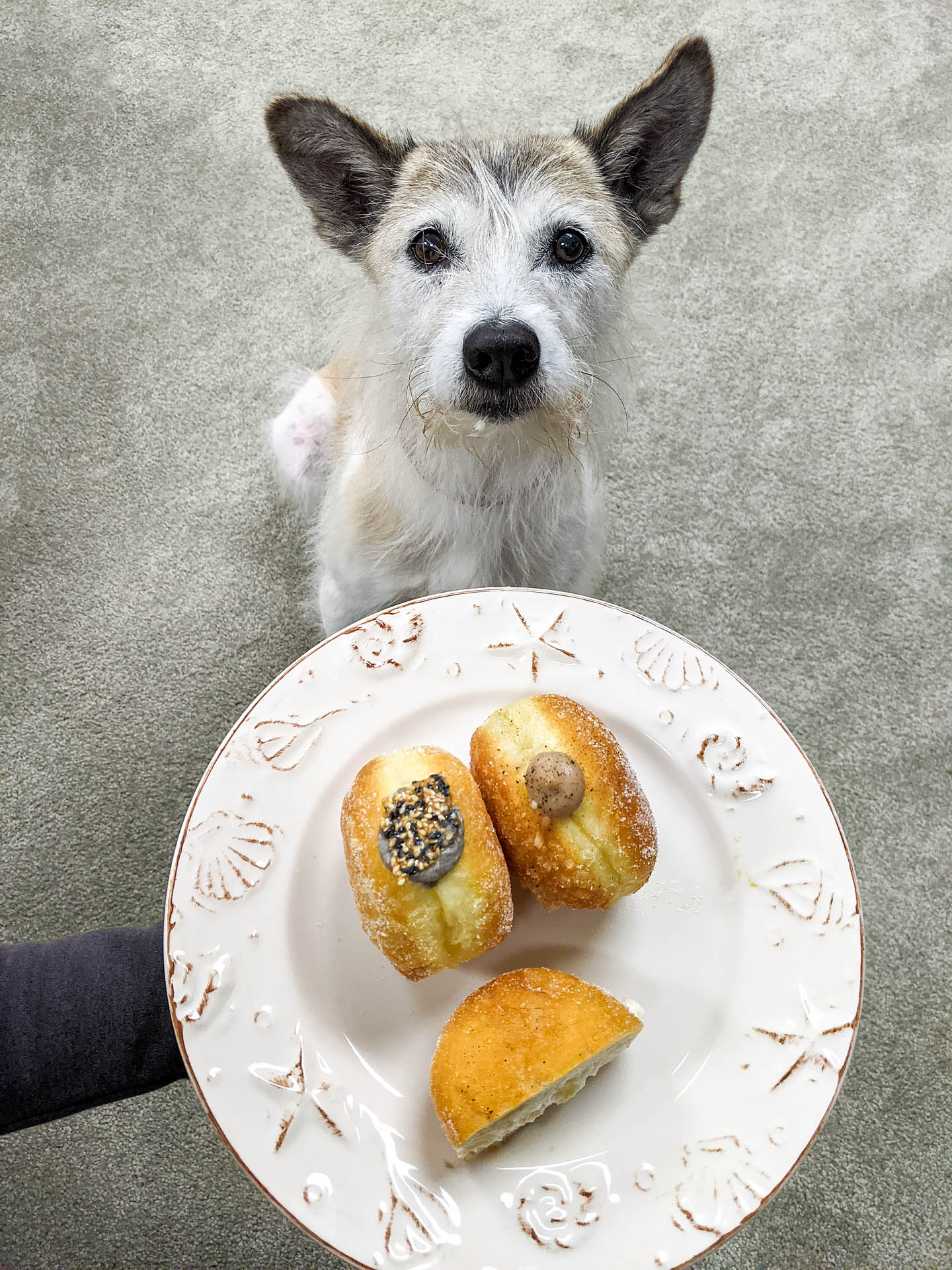