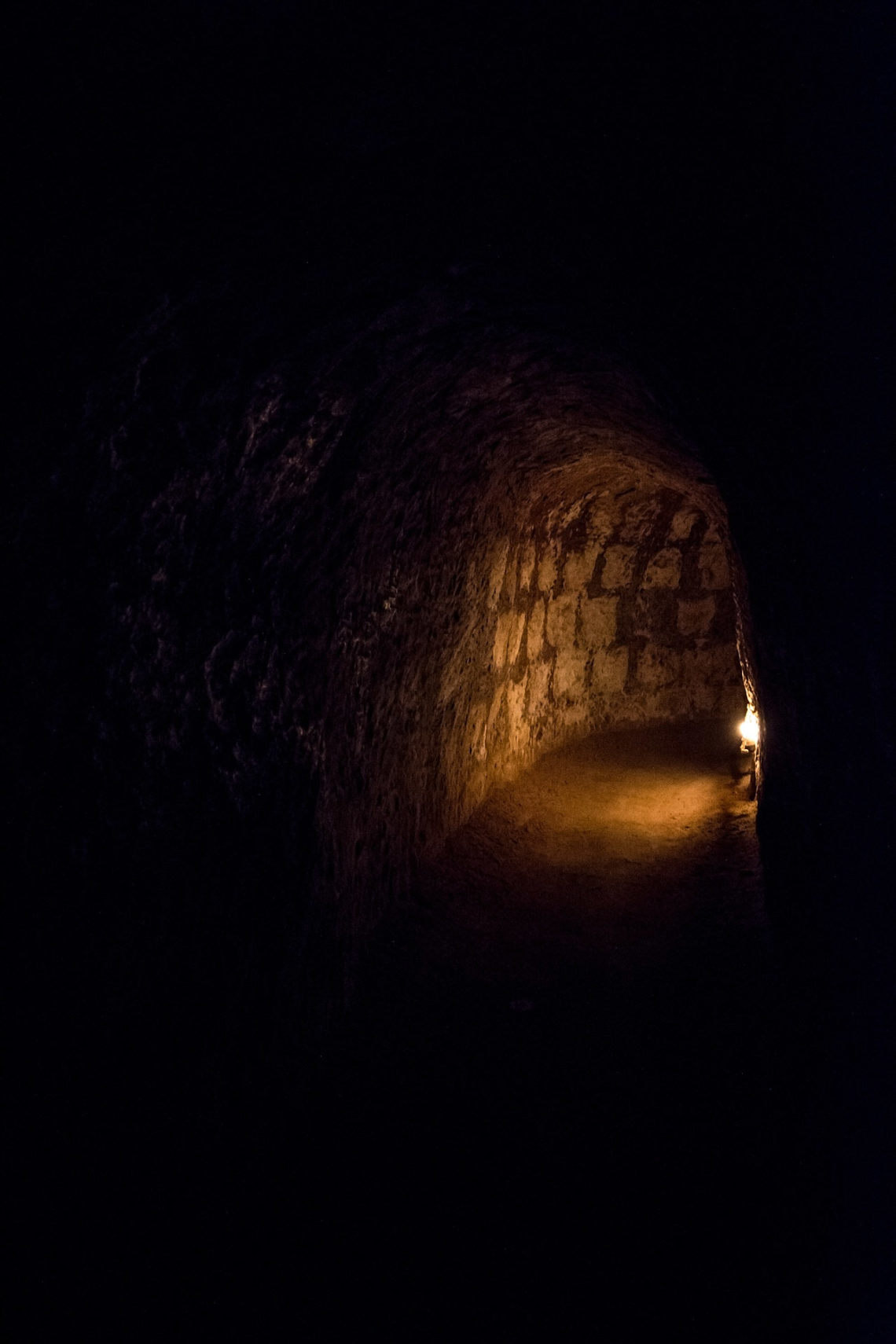 As an excursion from Ho Chi Minh City, we went to visit the Cu Chi district. Starting with the war against the French in the 1940s, tunnels were dug in Cu Chi to help local fighters survive airstrikes and other attacks on the territory. When the Vietnam war began in earnest, the old tunnels were excavated and expanded, far beyond the original district, eventually linking important military bases, supply points and villages up to 250 kilometers apart. These tunnels were crucial for the Viet Cong to maintain their foothold against the far better-equipped US and South Vietnamese forces.

Our guide was excitable and speedy, talking quickly as we unloaded off the van, and set off at a rapid pace down a path through the woods. After a couple short stops where he impressed upon us the grim and destructive nature of the weapons the Viet Cong faced, we sat down in a pavilion and were treated to a short film about the history of the Cu Chi tunnels. It was an impressive piece of propaganda, painting the North Vietnamese as non-military, peace-loving farmers who enjoyed picnics and fruit harvesting, until the evil Americans (literally referred to as ‘hateful devils’ on multiple occasions) suddenly destroyed their country. Regardless of your opinion of the politics of the war, it was disturbing to hear such cheerful and congratulatory accounts of Viet Cong soldiers and the number of combatants they had killed. Seemingly glossed-over was the fact that many of these combatants were their own countrymen.

After the film, we headed for the tunnels themselves. We played a short game of “find the entrance” before the guide kicked over a pile of leaves, revealing a tiny wooden cover. We took turns sliding down inside the entrance, which the guide informed us had, along with the attached tunnels, been specially widened to accommodate tourists. The original entrances were roughly 30x50cm, or around 12×20”, while the tunnels themselves were routinely around 50x80cm (20×31”).

The tunnels themselves are fairly impressive, given their expansive distribution and structure, along with the limited equipment and conditions for their construction. Typically made up of three levels, the first level was usually 3-4 meters below the surface and was the primary way Viet Cong moved around. The second level often contained sleeping quarters 6-7 meters under the surface, while the deepest levels, upwards of 10 meters underground, were primarily for escape, usually meeting up with nearby rivers. Ventilation holes were dug to all depths and disguised on the surface using rocks or termite mounds.

Our brief trips through the tunnels were claustrophobic and uncomfortable. The longest section was around 100 meters, a blind scramble through the pitch black, hunched over almost to a crawl, down slopes that couldn’t be seen, around corners that had to be felt, finally emerging breathless and dirty on the other side.

After some examples of what living quarters were like underground, we sat around tables and were served pandan tea and boiled cassava root. The guide informed us that the cassava root was a primary food source for those living in the tunnels, due to the chemical destruction of local crops and plants. The root was soft and bland, almost flavorless, and most of us watched in amusement as Jenn went back for seconds and thirds. 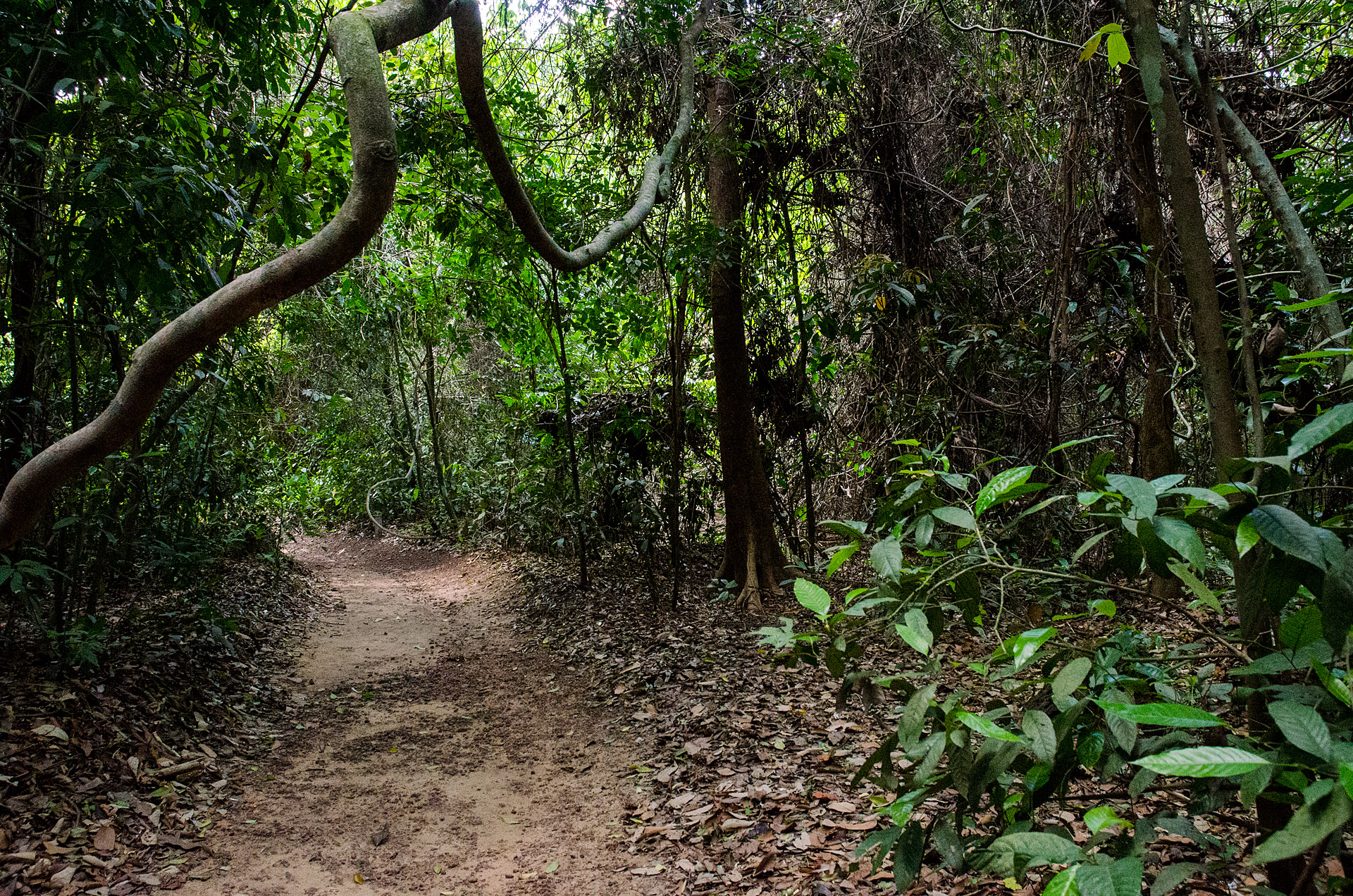 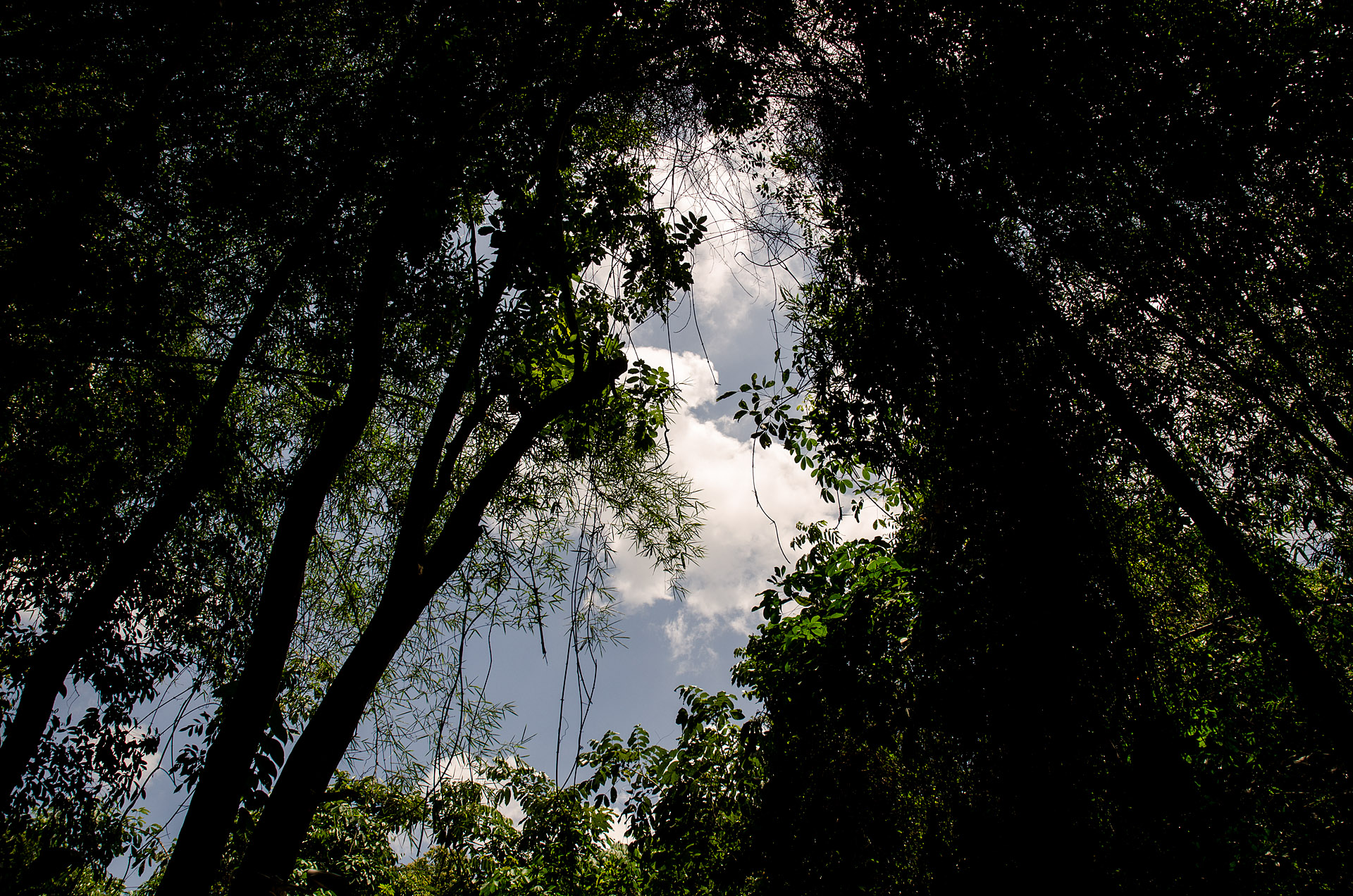 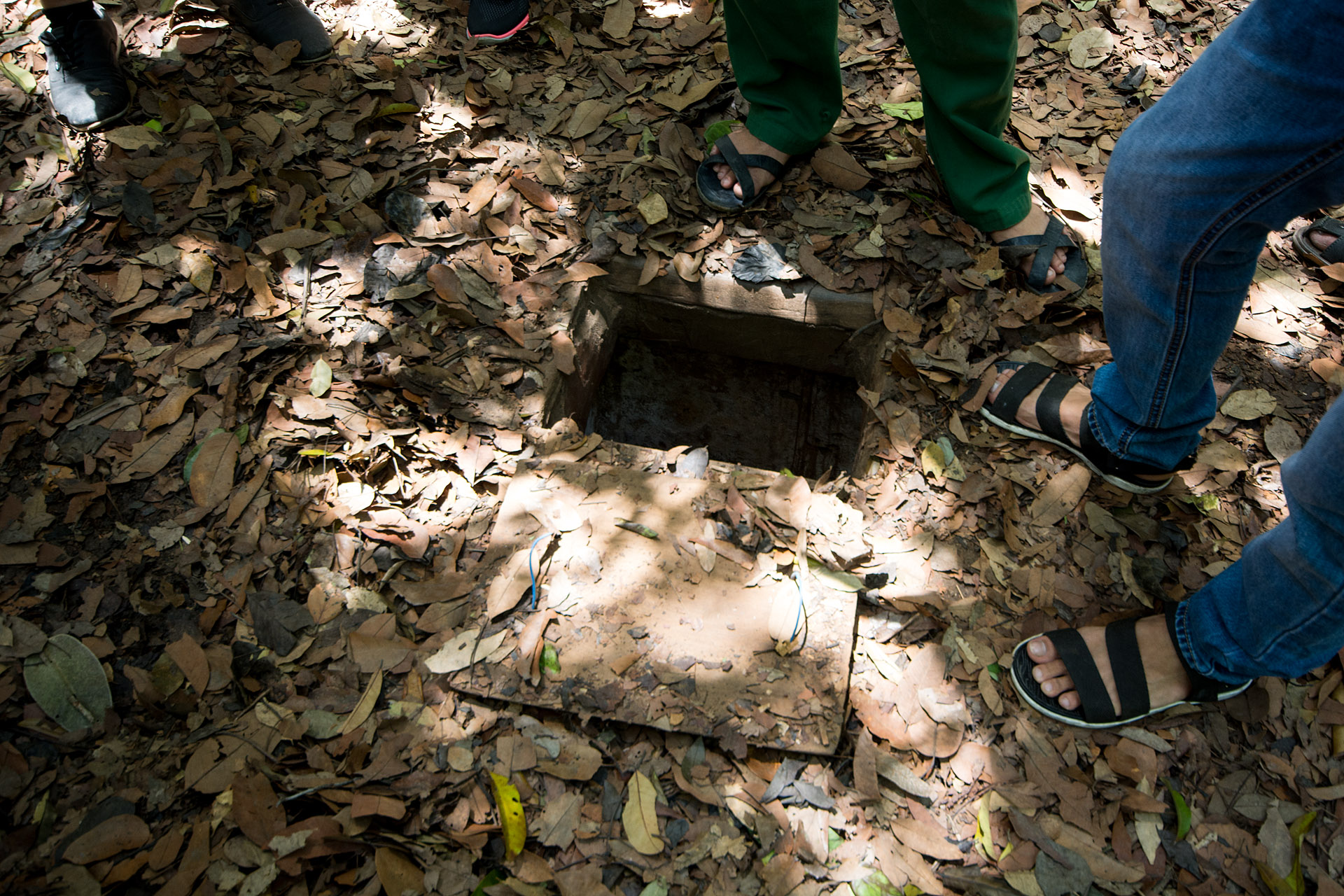 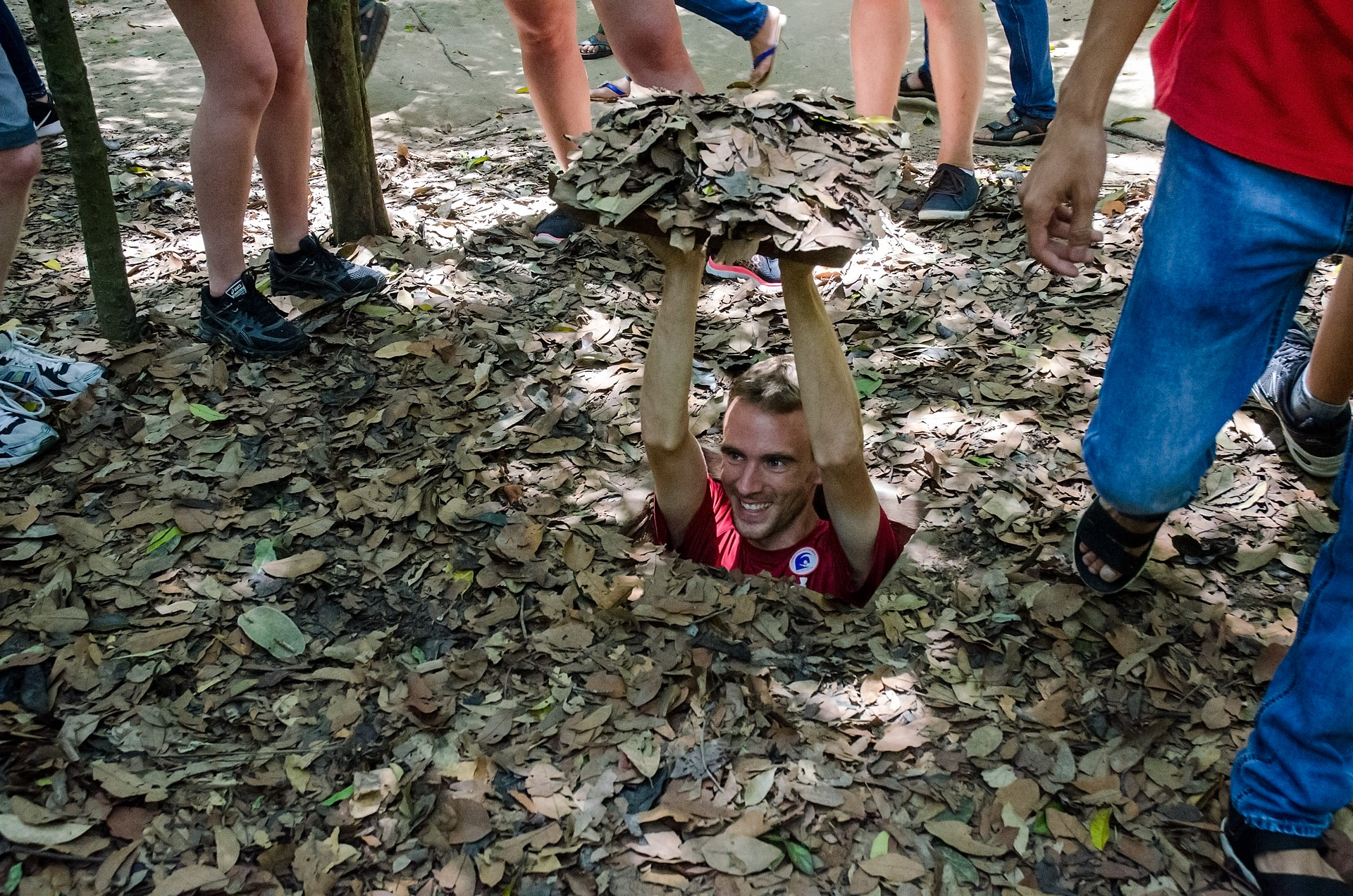 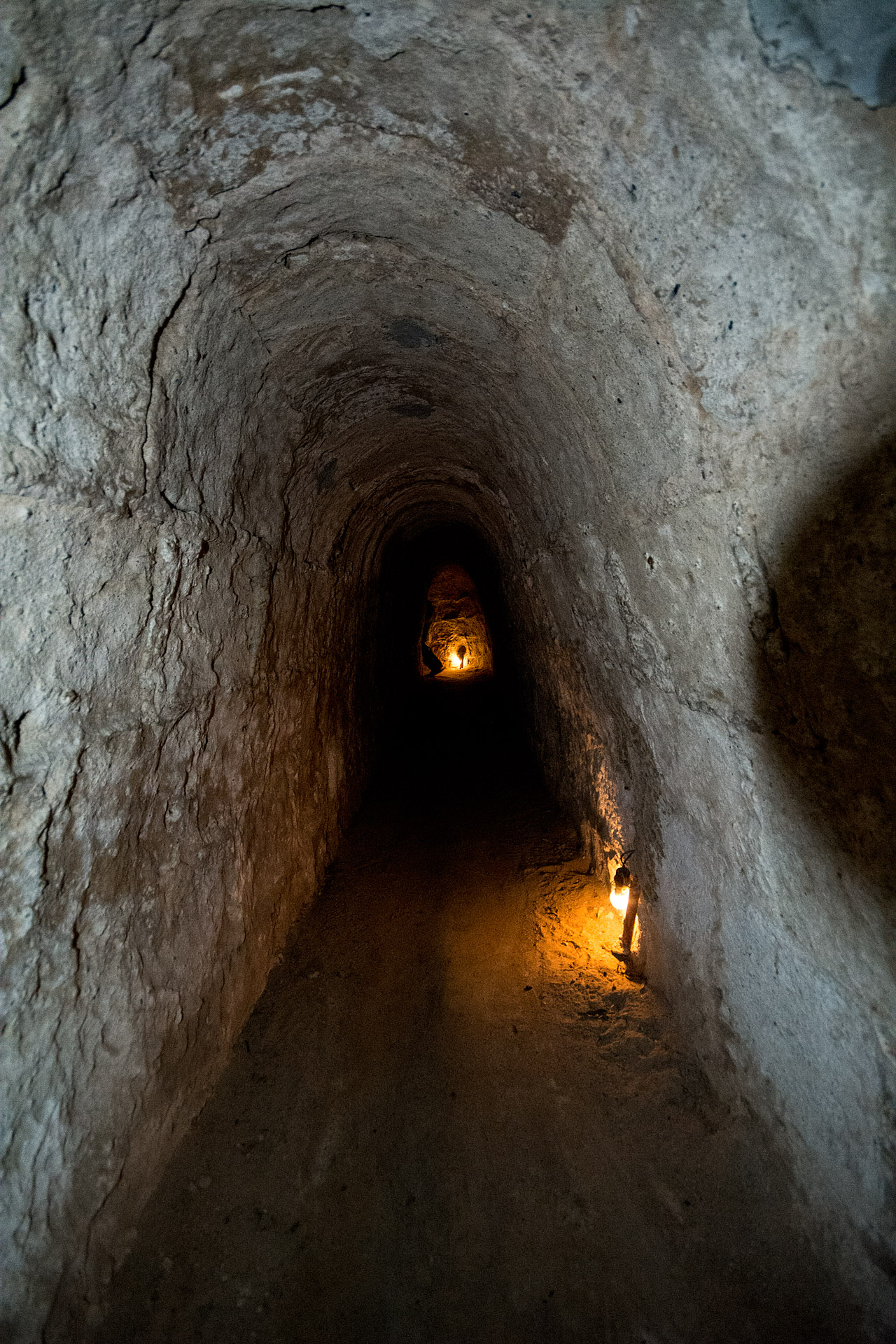 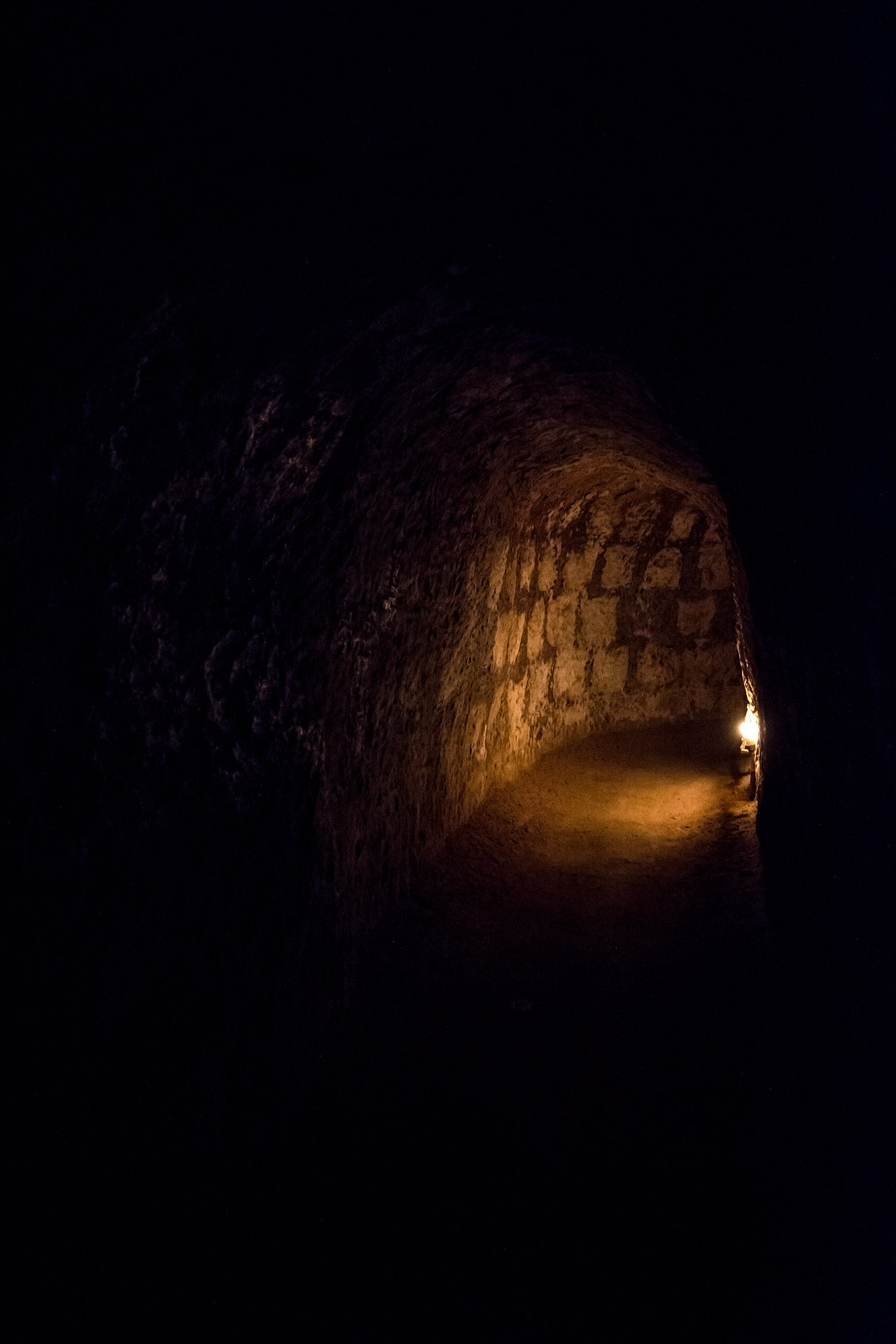 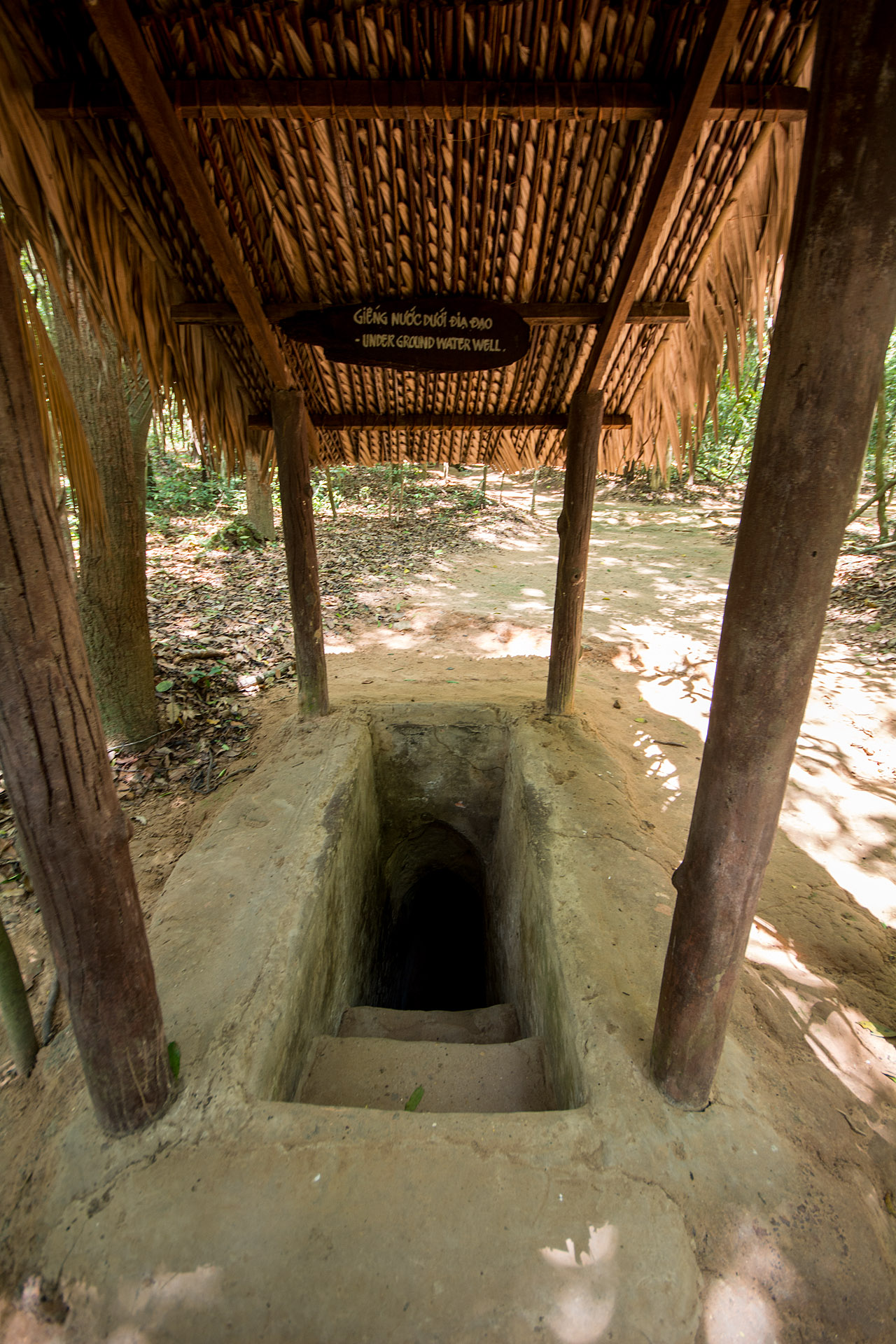 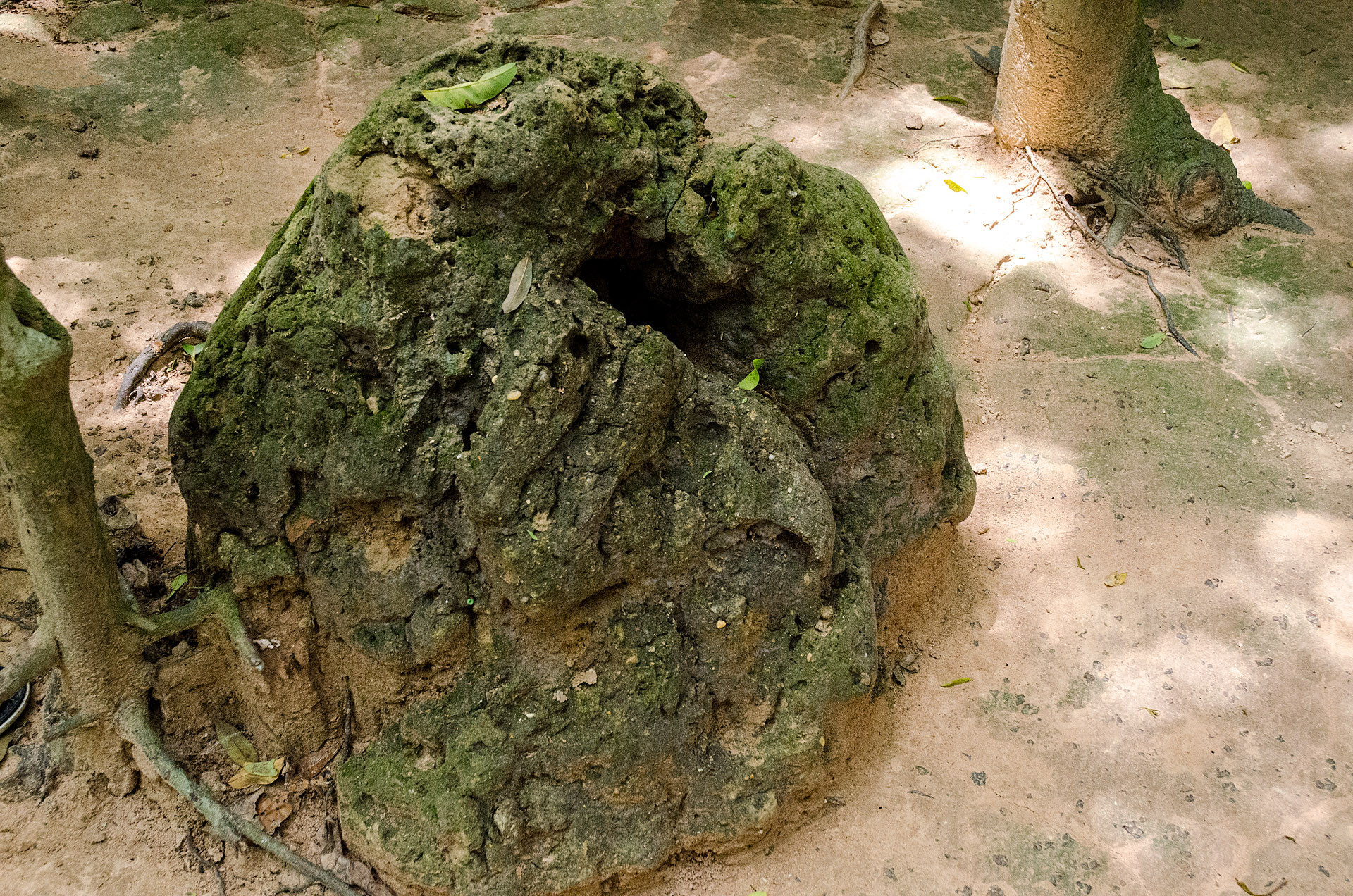 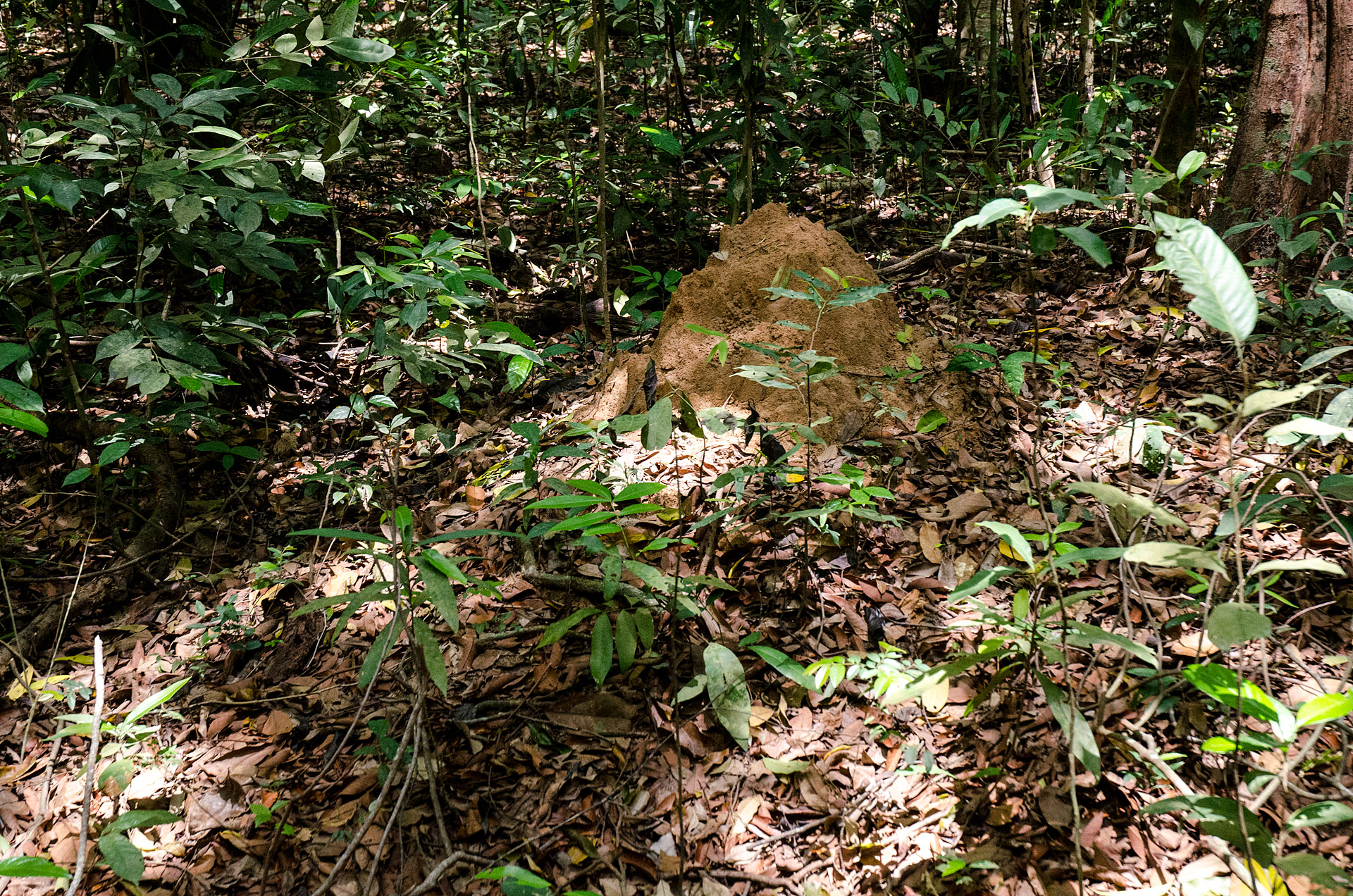 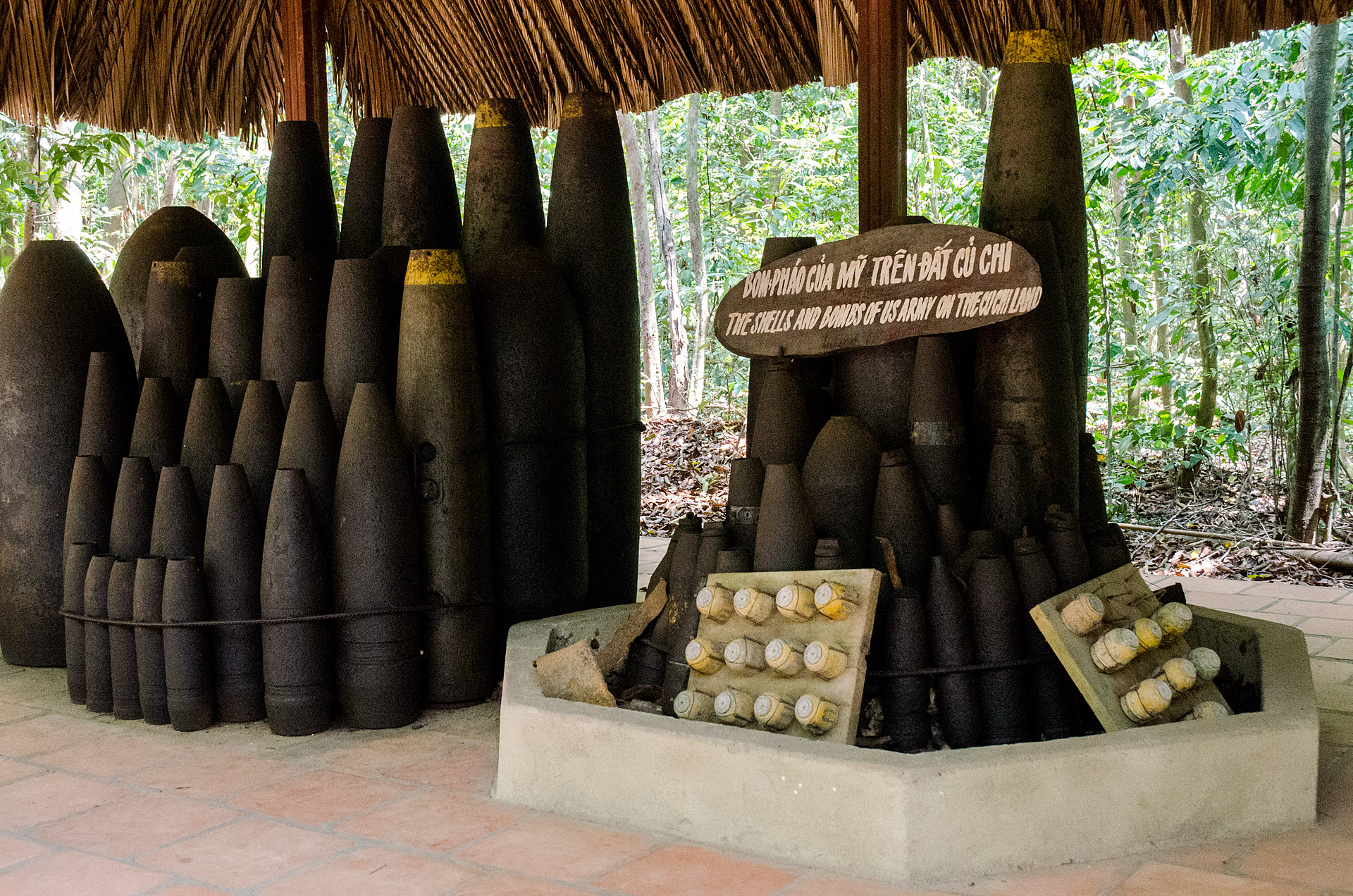 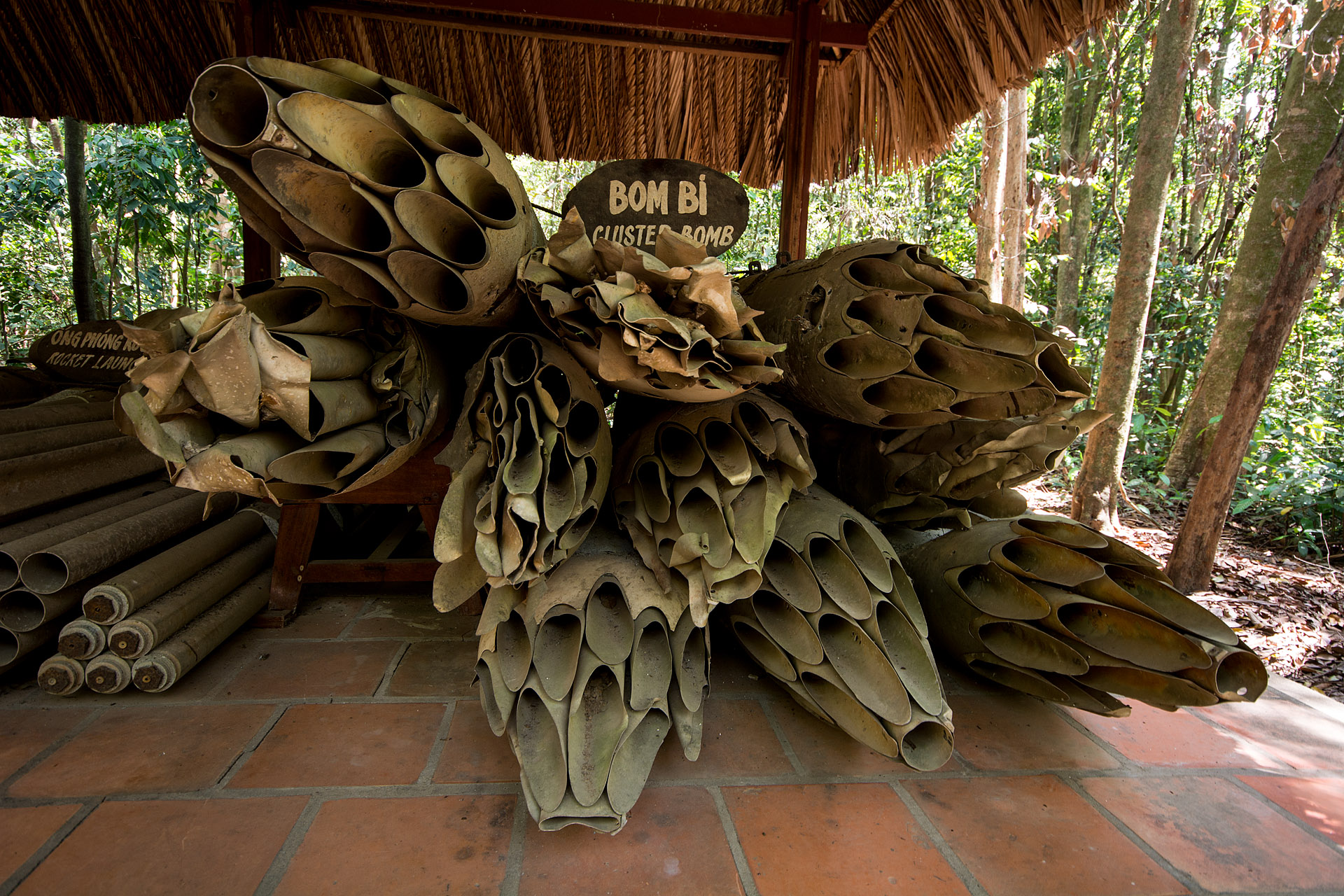 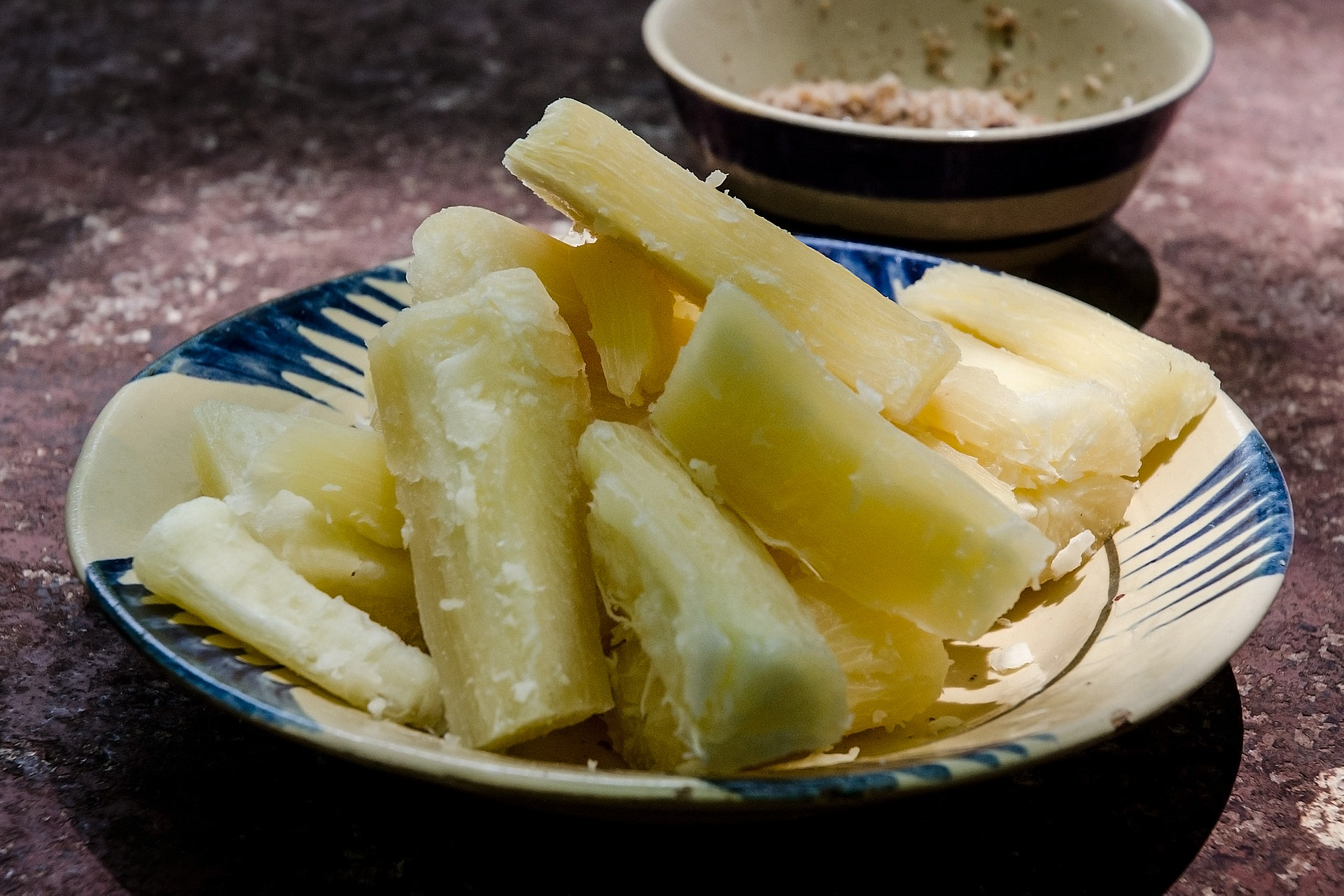 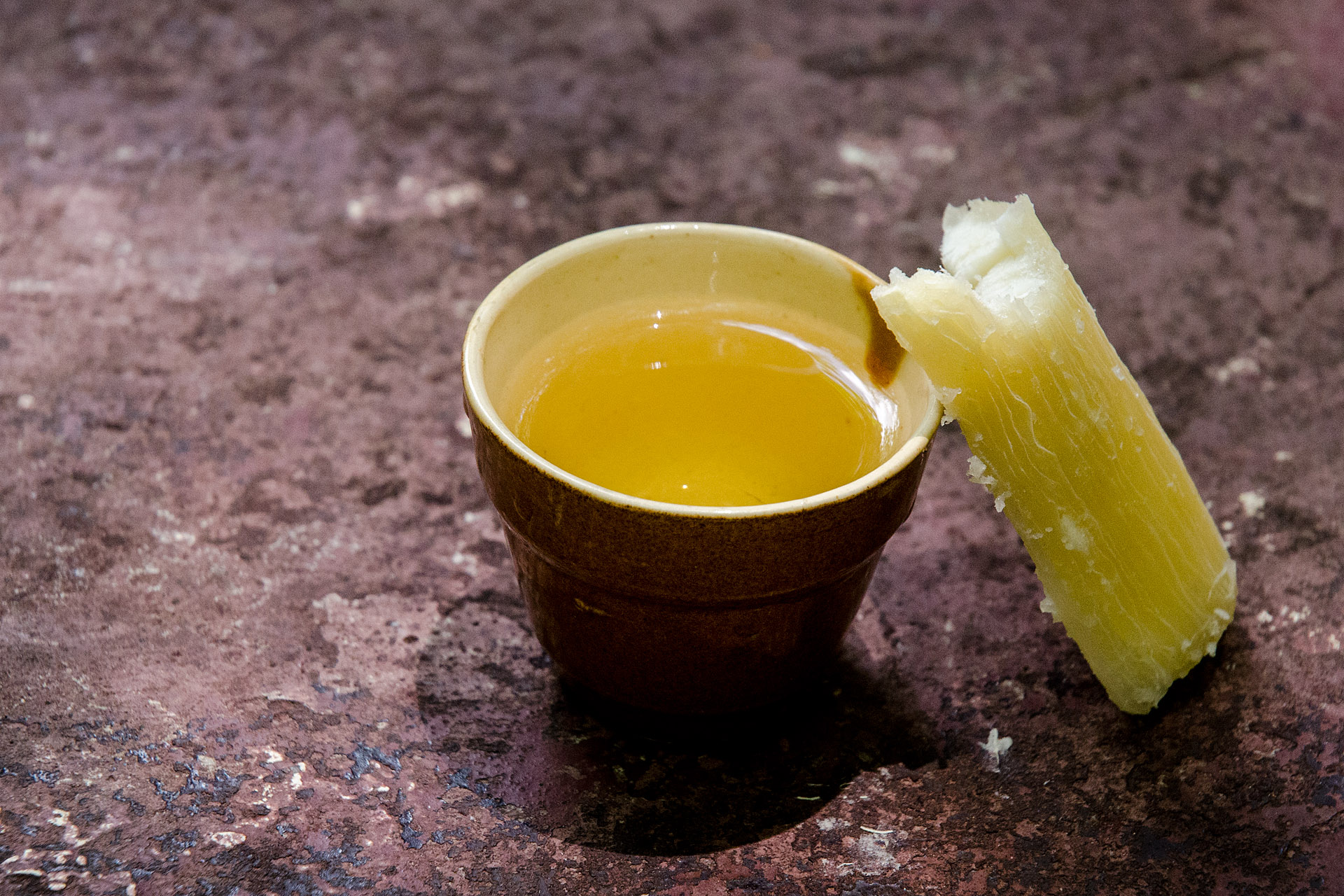 Finally, we got back in the van and made one more stop before heading back – at a firing range. Here, tourists were given the morbid opportunity to fire wartime weapons, immediately after listening to gruesome details about how many people died in the conflict. $20 bought you ten bullets and a few minutes on the range with your choice of an M-16 or AK-47. We’re usually up for novel activities, but this seemed a bit tasteless and we sat it out, along with most of our group.