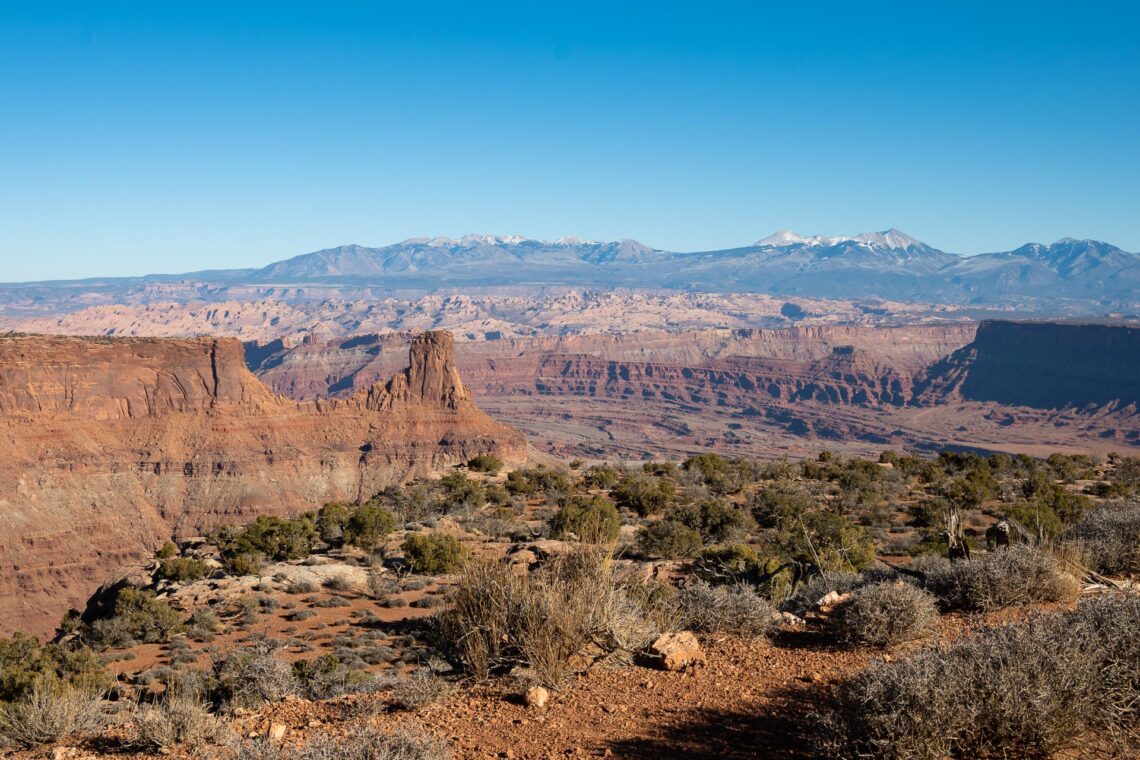 About 30 miles southwest of Moab, Dead Horse Point State Park sits atop a high plateau in the middle of eastern Utah’s barren and rugged desert. From an elevation of around 6,000 feet above sea level, Dead Horse Point overlooks a tangle of buttes, canyons, and mesas. This intricate landscape was carved over millions of years by the erosive force of the Colorado River, which flows some 2,000 feet below the escarpment.

Looking out across the landscape, you can see millions of years of geological history. The sculpted strata formed from sediment depositions from ancient, inland seas and waterways as well as early volcanic activity. Sitting at an elevation of around 4,000 feet above sea level, the river-level sediments were deposited some 300 million years ago. Above the water level are the Cutler and Moenkopi Formations, overlaid by the uranium-rich Chinle Formation. The uppermost strata consist of Jurassic-age Wingate and Kayenta Sandstone, the latter of which you stand on at Dead Horse Point. 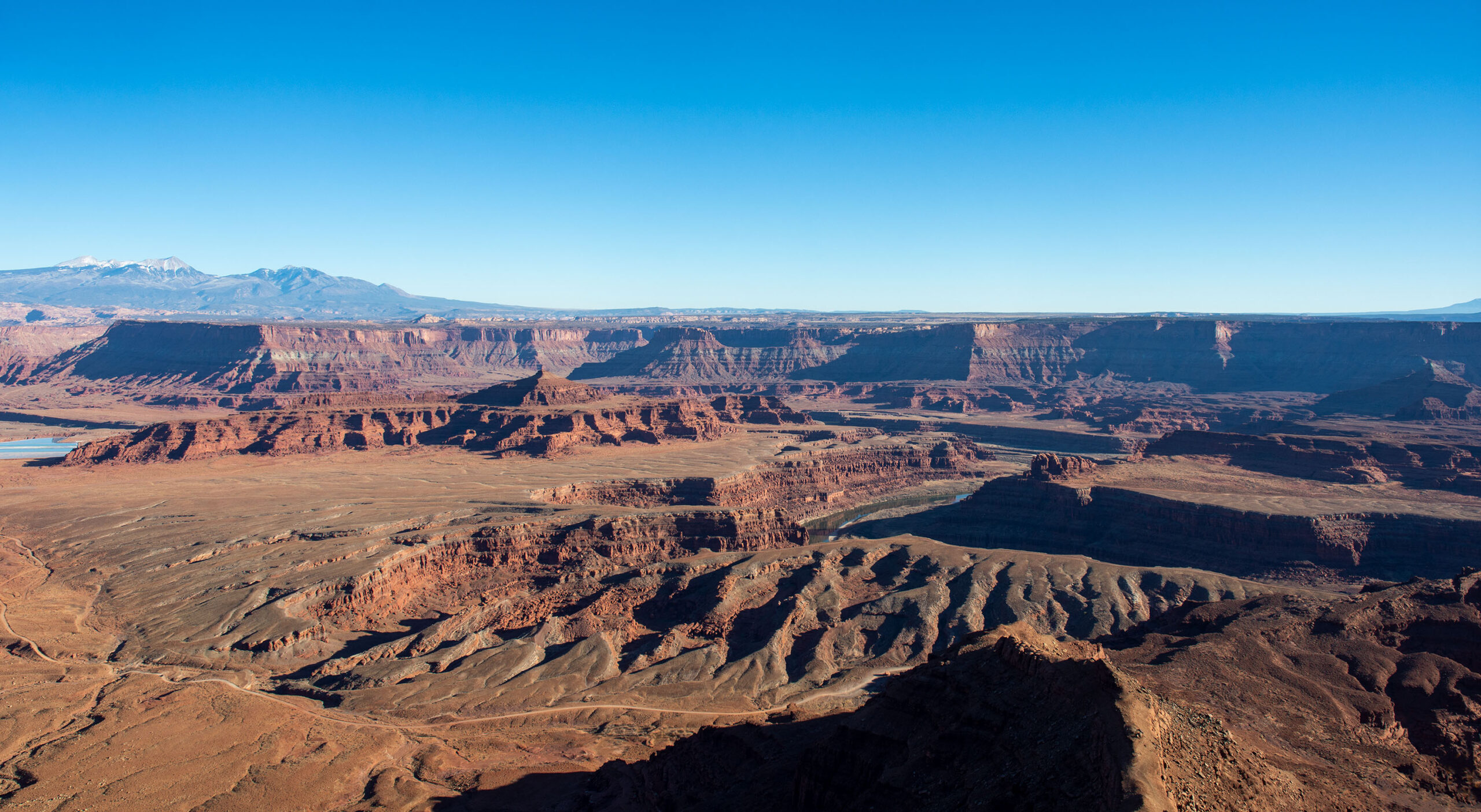 The story of how Dead Horse Point got its name dates back to the end of the 19th century. It’s said that, in the late 1800s, a group of cowboys recklessly rounded up a team of wild mustangs and trapped them on the slender, sandstone peninsula now called Dead Horse Point. They corralled the horses at the cliff’s edge by placing branches and brush along the point’s narrow, 30-foot-wide neck. The cowboys then chose their desired stallions, while abandoning the others without water on the precipitous point. With nothing to drink, the horses were left alone to die.

From Moab, follow US-191 north for roughly 10 miles. Turn left onto UT-313 W and follow this road for about 22 miles. The Dead Horse Point State Park Visitor Center will be on the left. There is a $20 day-use fee for passenger vehicles.

The park offers a few designated hiking trails as well as 17 miles of singletrack for mountain bikers. For hiking, the East and West Rim join together to form a 5-mile loop dotted with a handful of overlooks. Off the West Rim, there is also the 1.25-mile (one-way) Bighorn Overlook Trail. For mountain bikers, the Intrepid Trail System offers eight singletrack routes of varying difficulty, and hikers are also allowed access to these trails. Dogs are allowed on the hiking trails within the park, but not on tracks within the Intrepid Trail System.

We spent an afternoon at the park as we drove through Moab en route to Grand Junction, CO from Monroe, UT. We arrived shortly before 3 p.m. to hike the East and West Rim trails and check out Dead Horse Point at sunset.

The rim trails are about as flat as a pancake, gaining less than 300 vertical feet from start to finish. We started out on the East Rim Trail, beginning near the visitor center and hiking clockwise. The first viewpoint we came upon was Basin Overlook. It was quite lovely, with eastward views overlooking the Potash Ponds and out to the La Sal Mountains. The snow-capped peaks of the La Sals are an unexpected sight behind the tiers of stark red rock. A similar contrast, the vivid blue Potash Ponds burst from the monochromatic terrain. These evaporation ponds are used to collect potassium-containing salts that are mined from minerals 3,000 feet below the surface using water from the neighboring Colorado River. The salts are mainly used in fertilizers, but can also be used to make glass and even batteries. 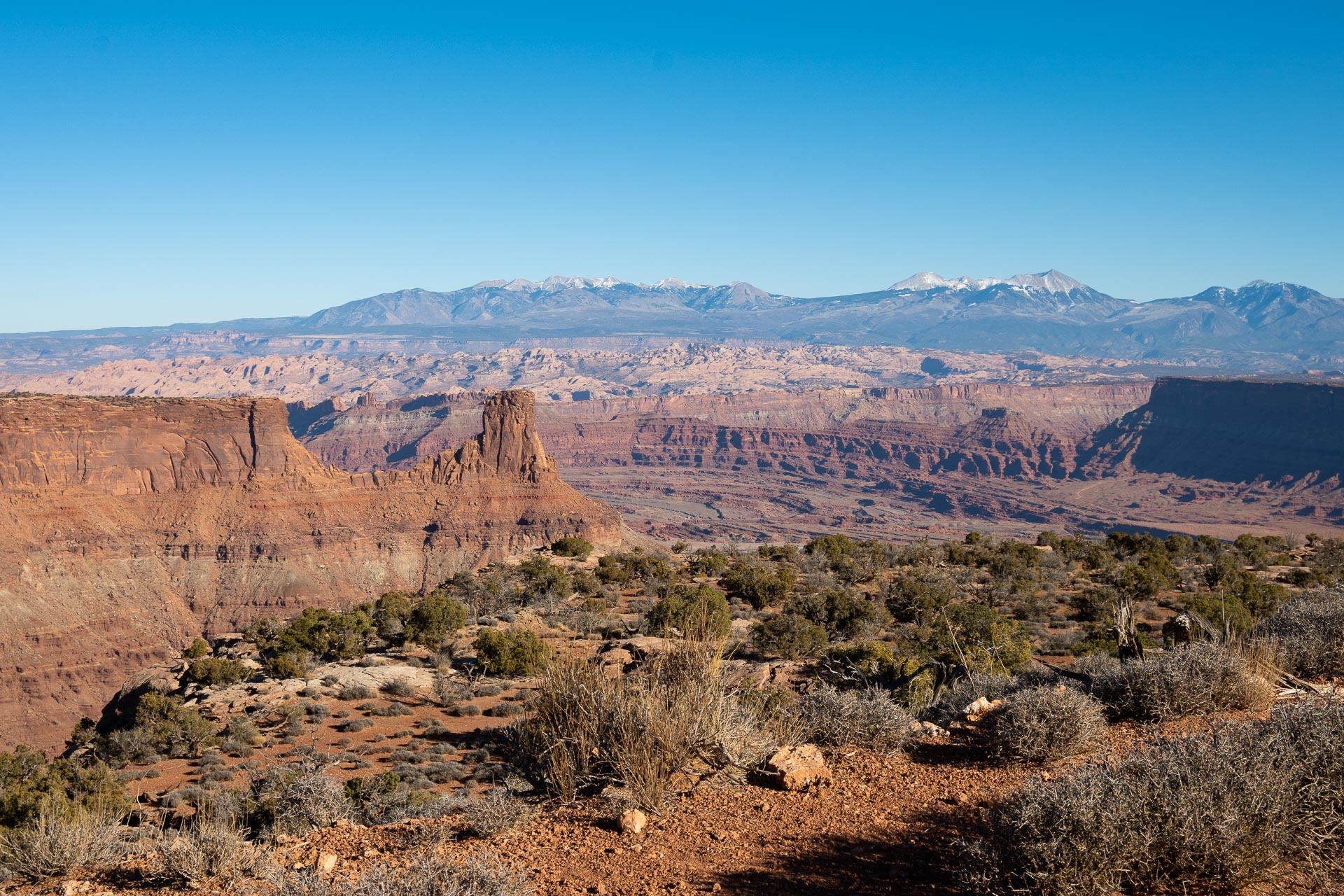 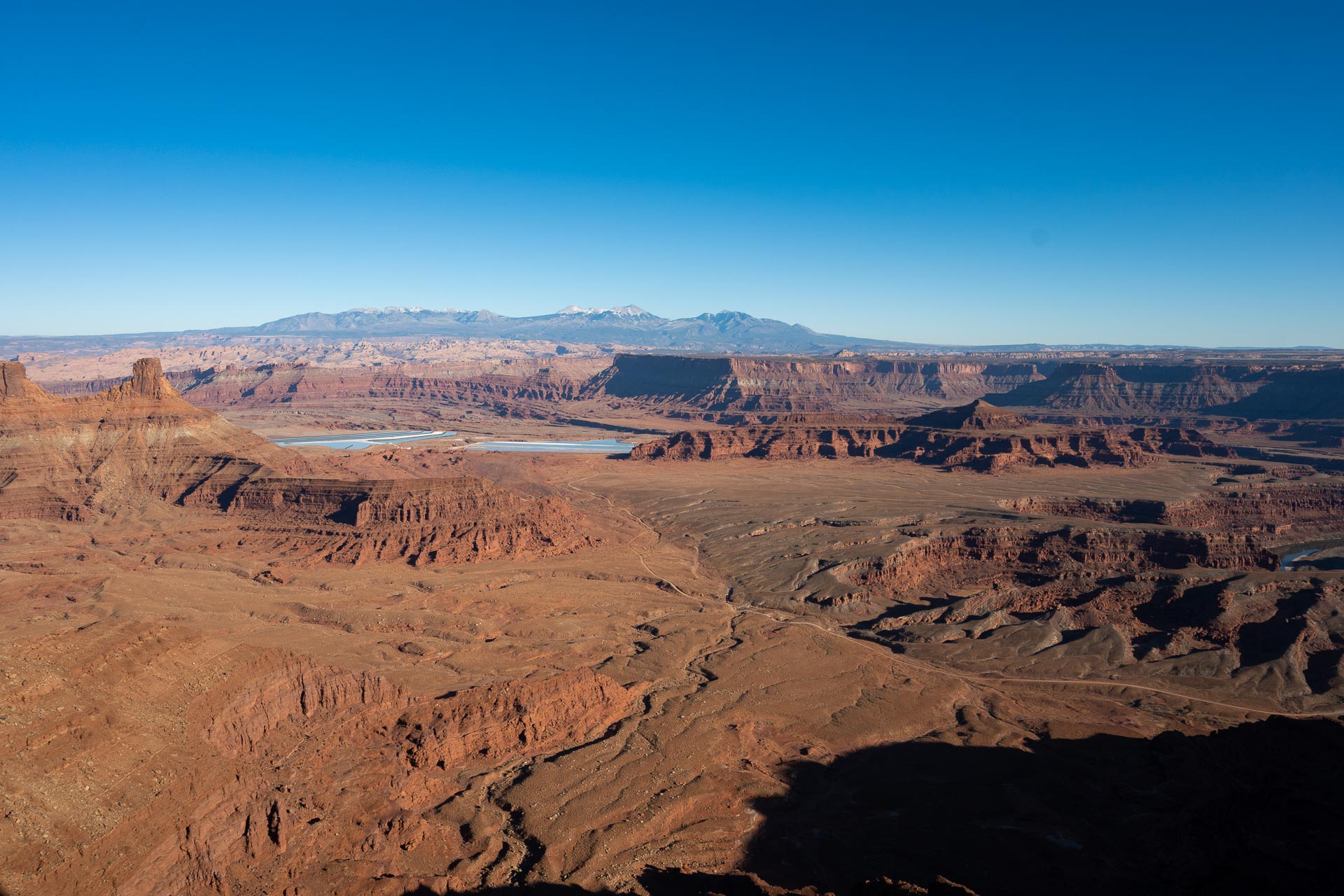 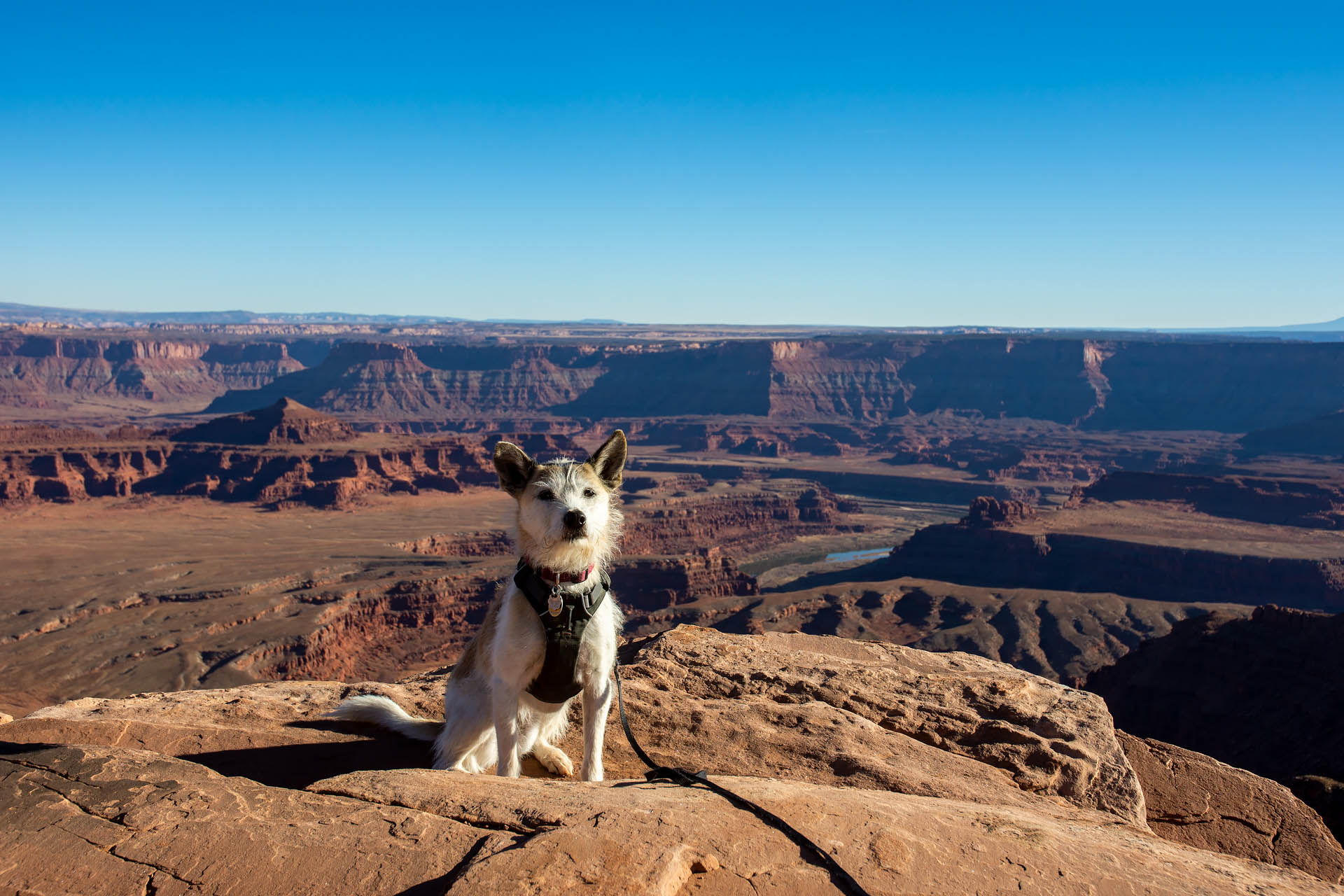 From Basin Overlook, it is just a short walk to Dead Horse Point passing along the scenic East Rim of the canyon. The textures and layers are kind of unbelievable, and the sandstone had been set ablaze by the late afternoon sun. 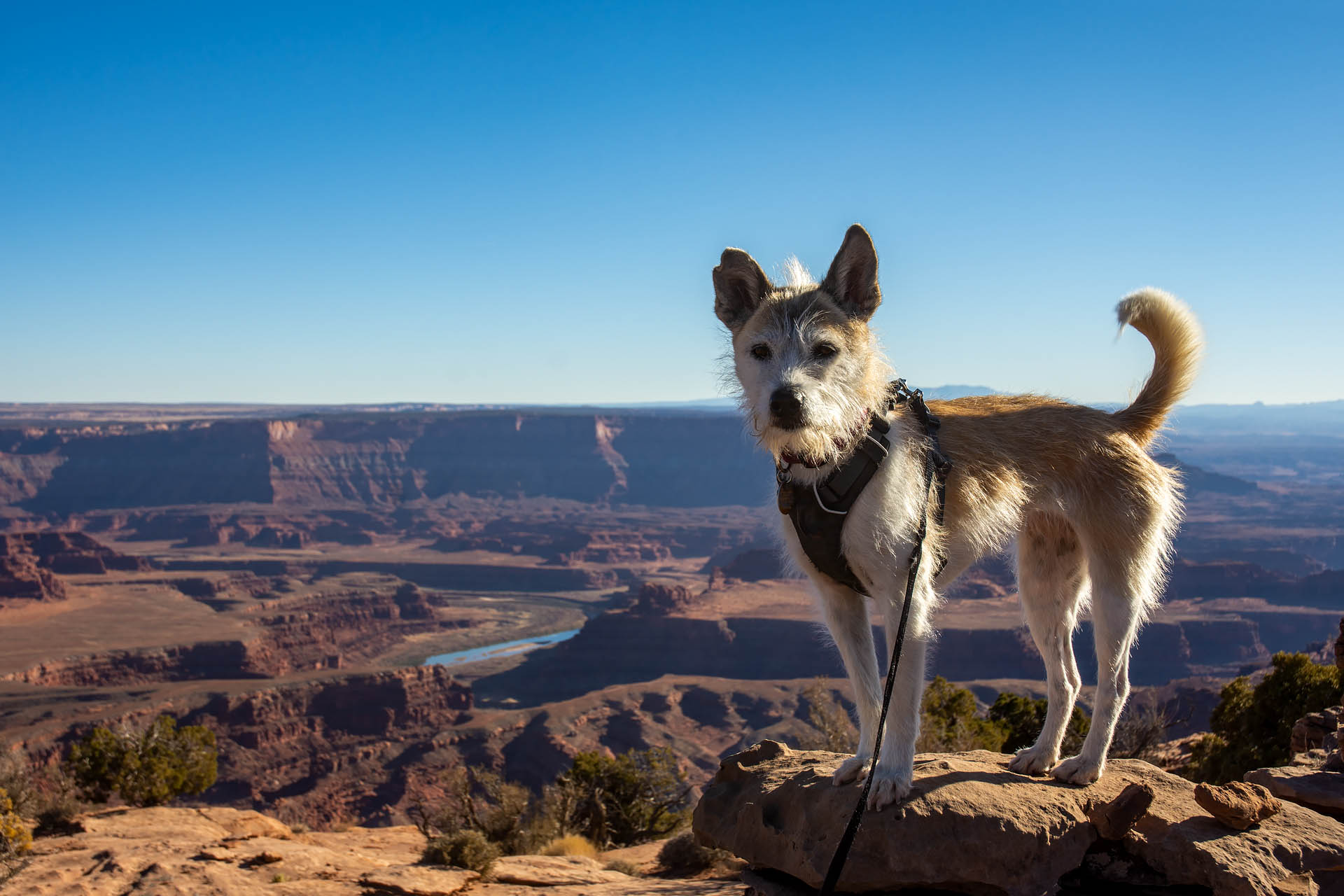 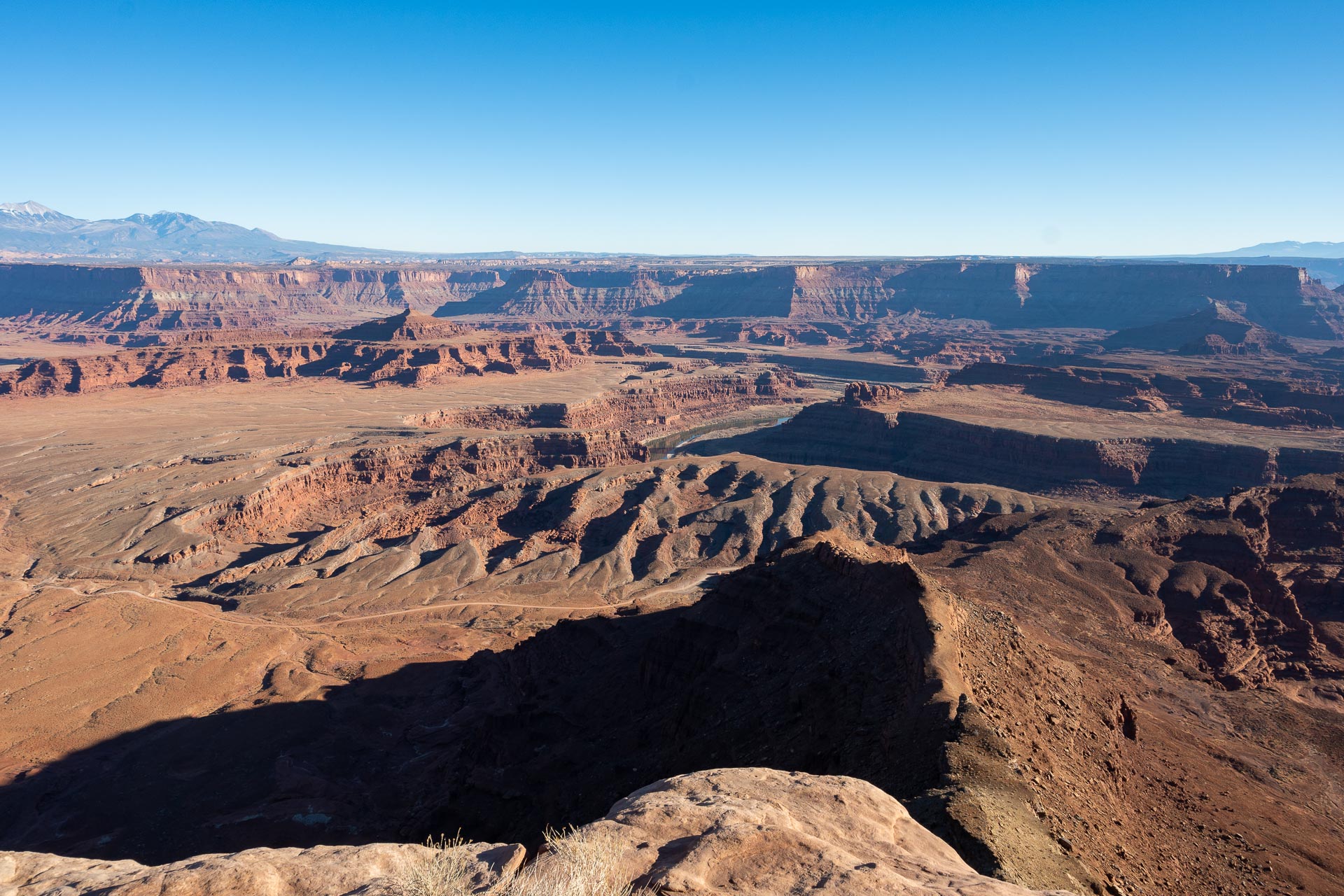 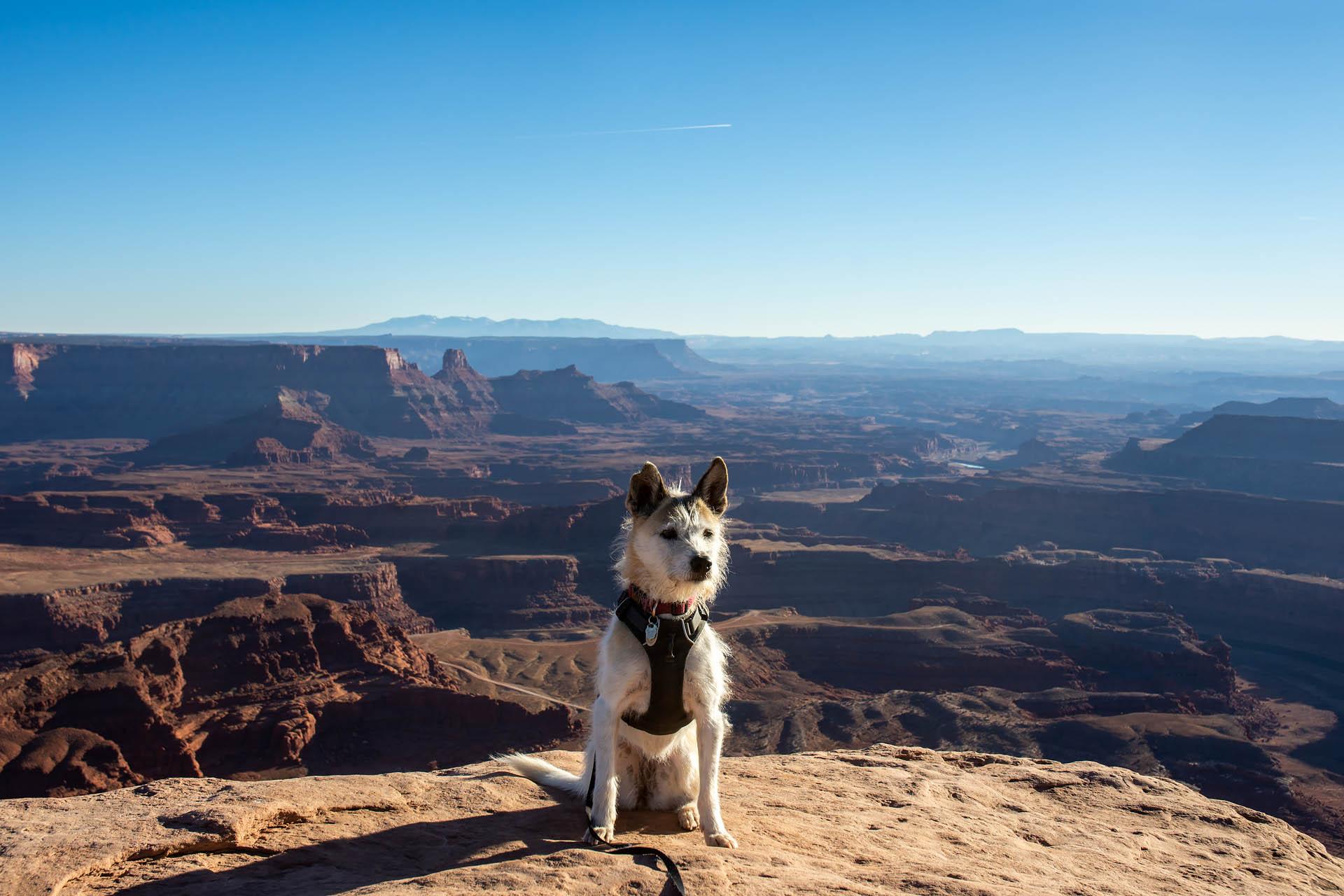 Admittedly, the eponymous Dead Horse Point was somewhat of a letdown for us. As we were walking, we realized that the road (UT-313) continues about 0.5 mile past the visitor center, nearly all the way out to the point. While it happens on so few of our hikes, it’s always a disappointment when you arrive at a scenic destination only to discover a parking lot and a bunch of cars.

The view from Dead Horse Point is spectacular, overlooking a striking 180-degree bend in the Colorado River. That said, even that turned out to be a bit of a letdown for us. As it approached sunset the light was surprisingly atrocious, as evidenced by our two terrible photos from the point. I’m not sure if it was the time of year that contributed to this – it was early December, so the sun never really rose that high in the sky – or if sunset is typically not the most ideal time to photograph the point. I would surmise the former, having seen some beautiful late-day photographs. Nevertheless, if you’re planning to visit and take some photos, I would try shortly after sunrise. The river’s gooseneck faces southwest, and I have to think some directional light from the east would enhance the colors of both the layered stone and water. 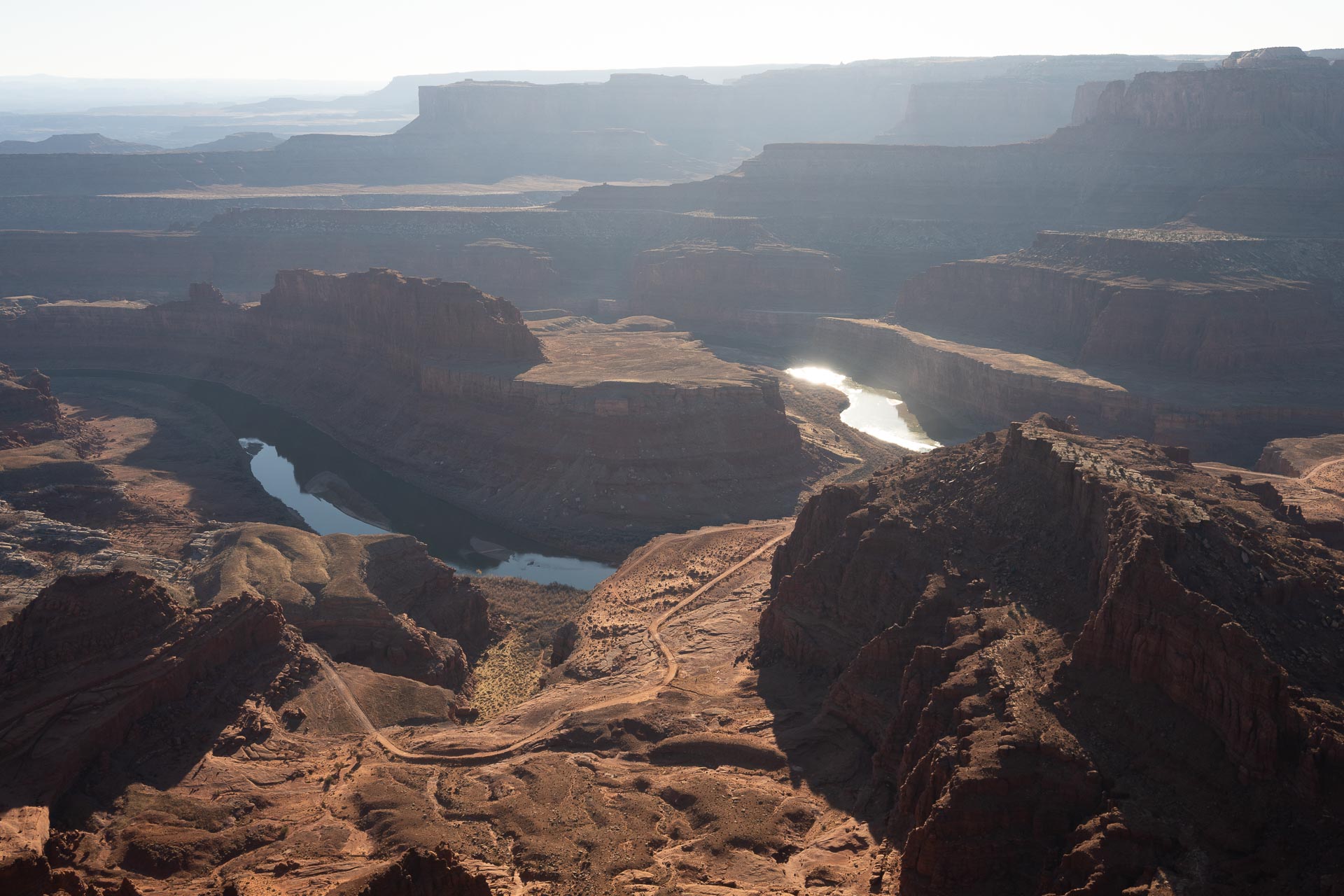 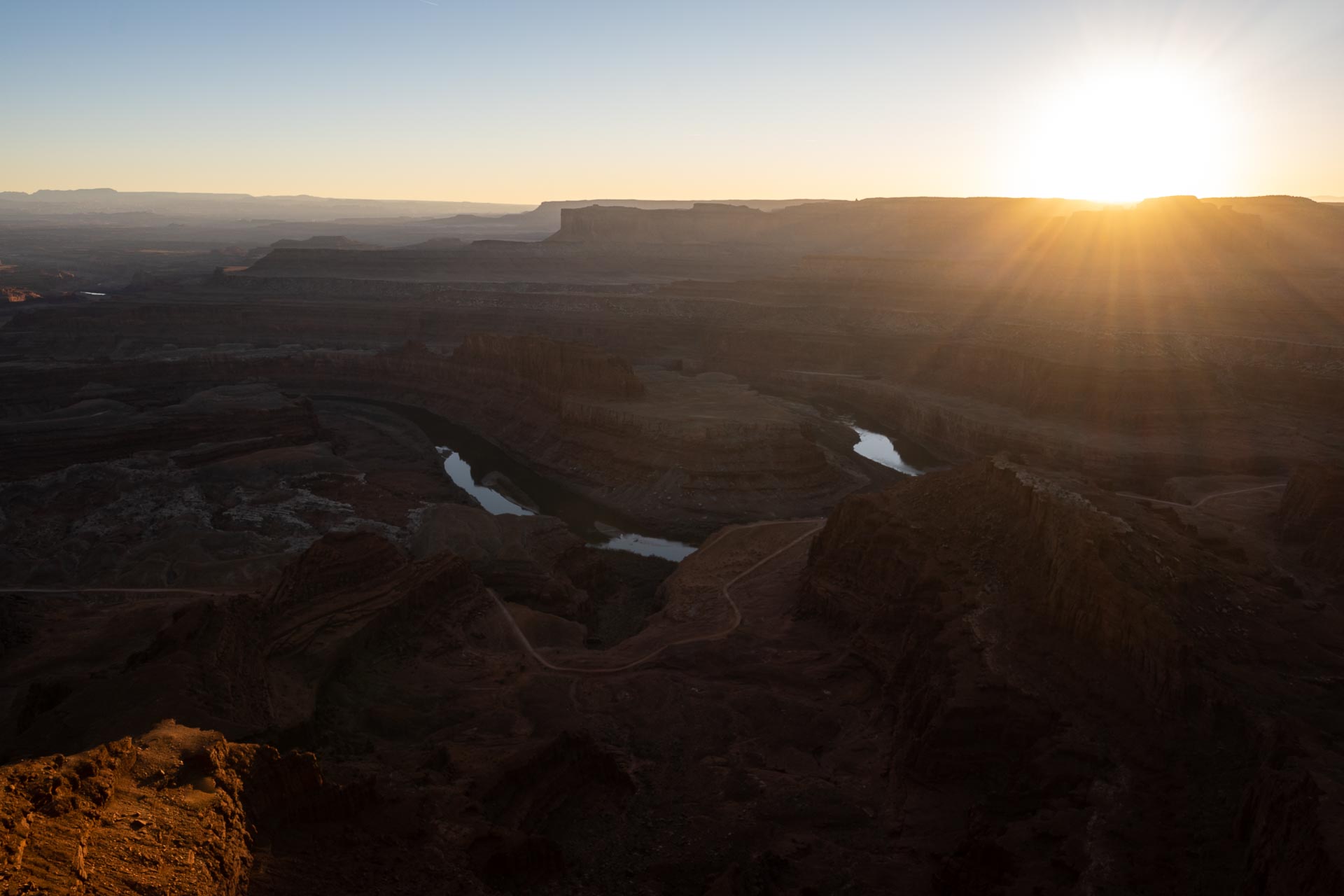 Continuing along the West Rim from the iconic point, we stopped briefly to enjoy the views from the Meander, Shafer Canyon, and Rim Overlooks. While this side of the canyon was pretty, we much preferred the views along the East Rim. Of course, since we were now facing west directly into the setting sun, this could have influenced our opinion. By the time we returned to our starting point at the eastern edge of the plateau, the prominent butte in front of the La Sal Mountains was smoldering in the last light of day. Even after a six-week stay in Utah, it still blew our minds to watch the red rock catch fire just before sunset. 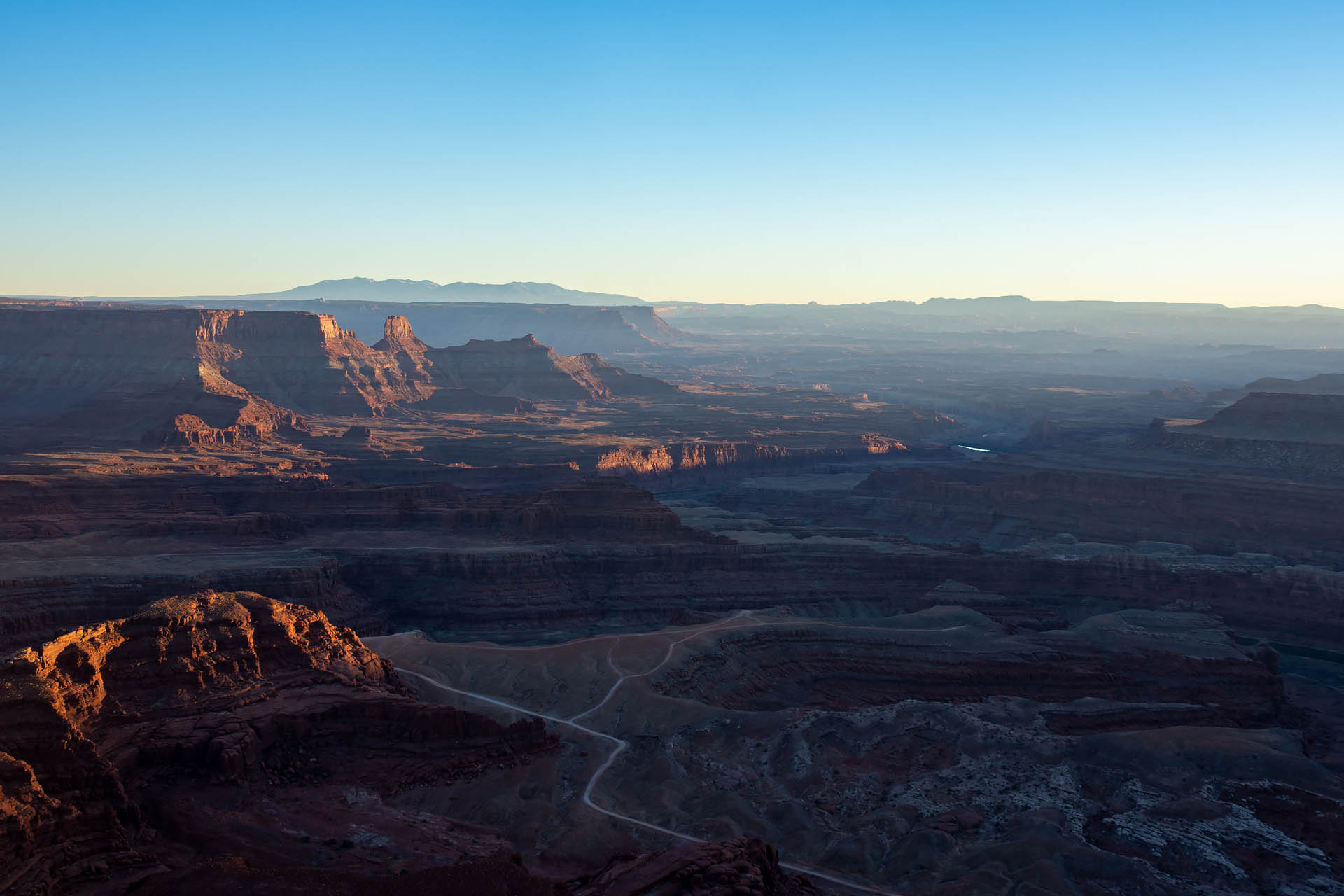 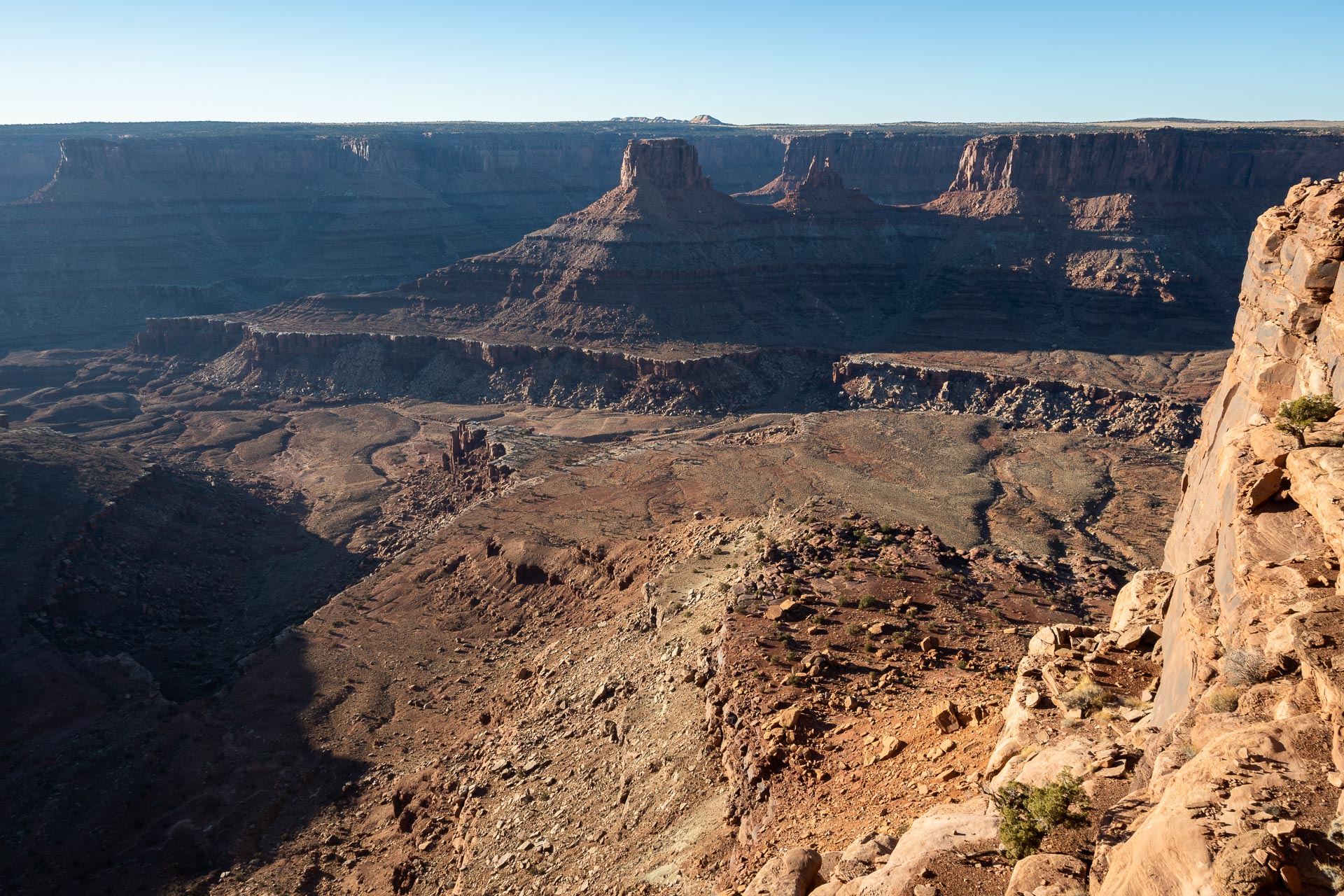 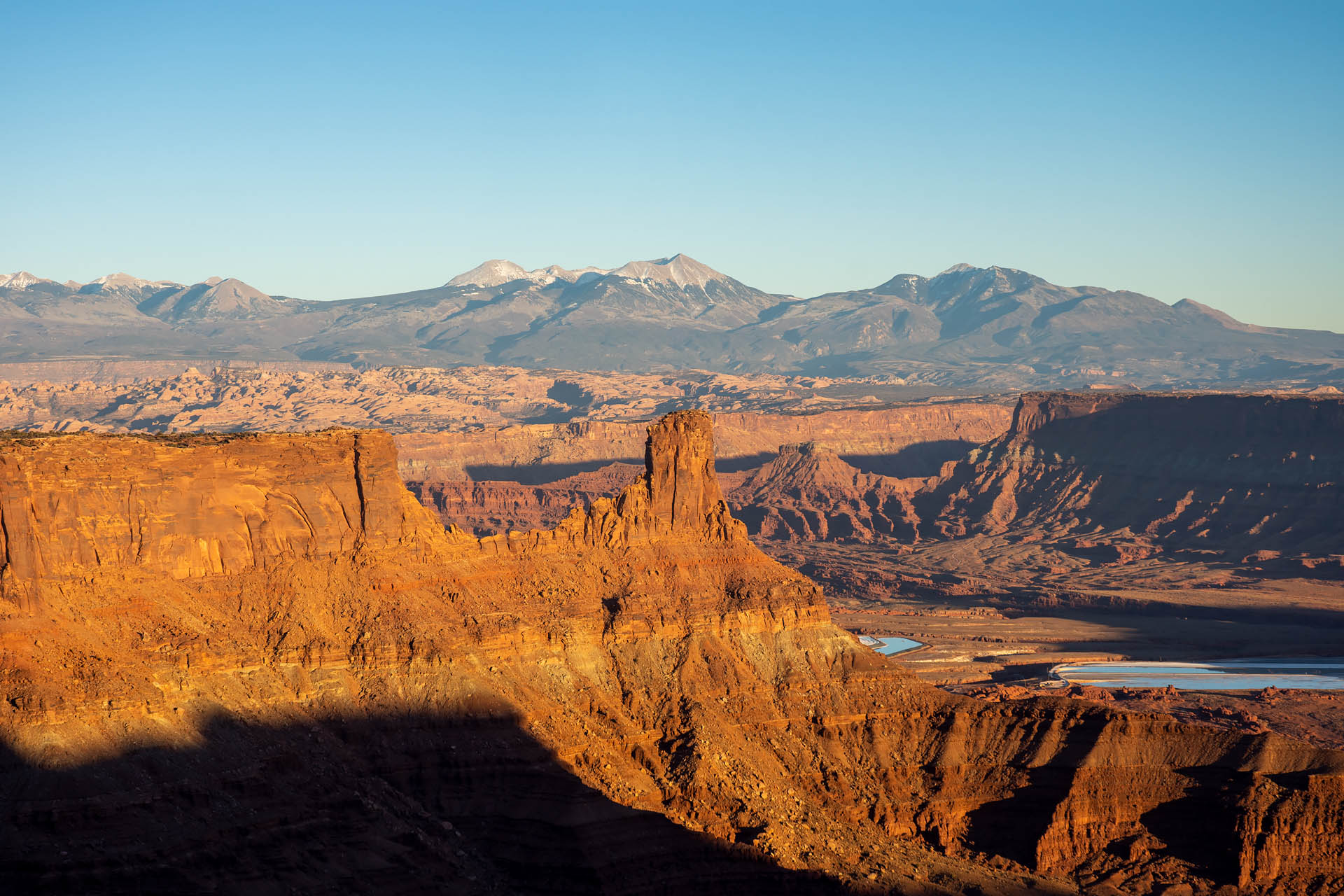 While we were hoping for a little more photo-wise from Dead Horse Point, the state park still made for a gorgeous afternoon outside. Moreover, as with most of the state parks we visited, it’s much less trafficked than the more popular national parks. And in the end, anytime we can get out and enjoy some new scenery with Sanchez, it’s a pretty good day. 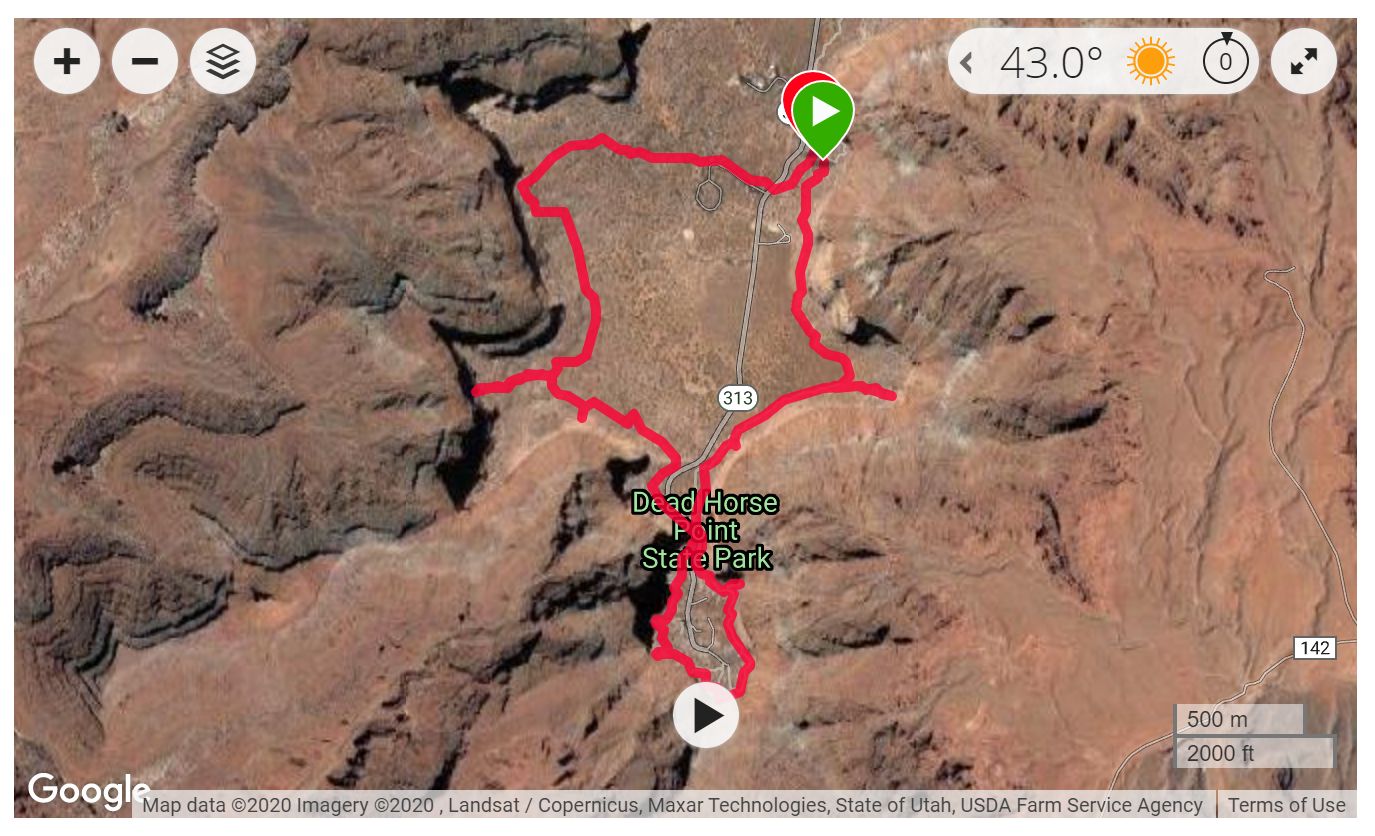