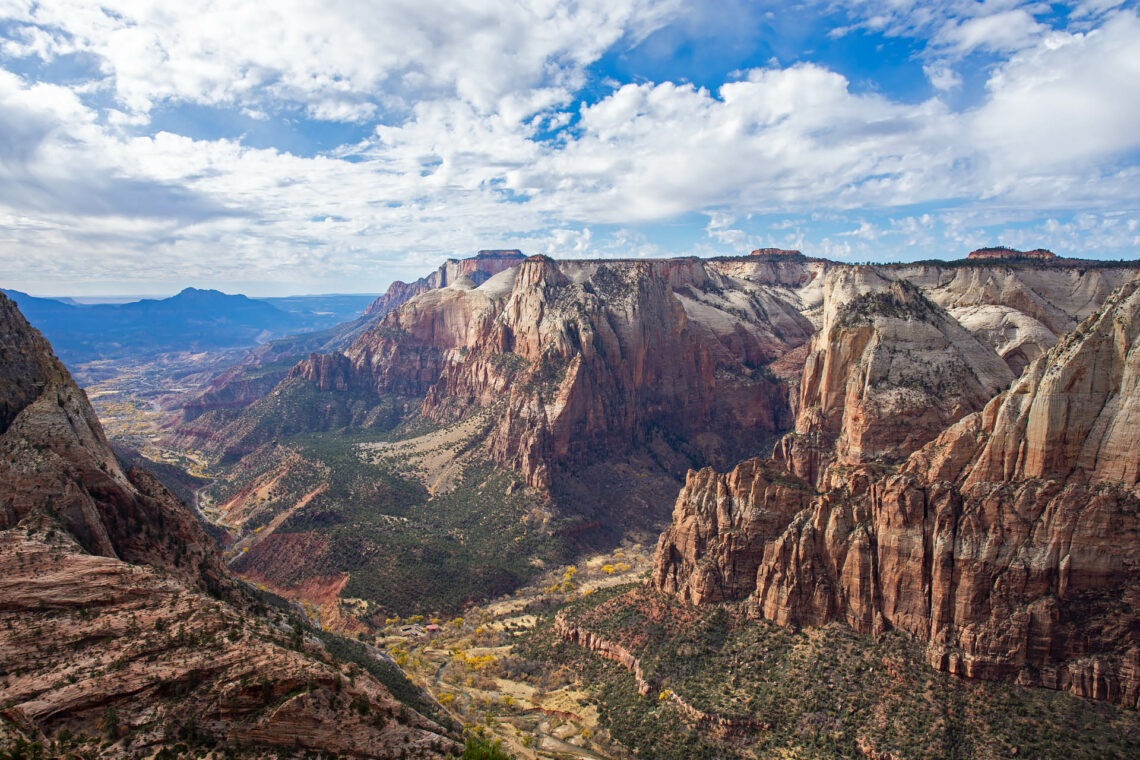 Located within Zion National Park’s East Rim Wilderness, Deertrap and Cable Mountains are lightly-trafficked trails where you can truly get off the beaten path and enjoy the incredible beauty of Zion Canyon. Unlike Zion’s two most popular hikes, Angel’s Landing and The Narrows, you’ll likely encounter very few other hikers on the trails in this section of the park. While most visitors seem to stick to the valley floor, choosing to take in the views from below, the trails along the high mesas offer a stunning glimpse into the colorful canyon.

Utah’s first designated national park, Zion’s focal point is a 15-mile-long canyon whose saw-toothed, sandstone walls soar between 2,000 and 3,000 feet above the coiling banks of the Virgin River. Zion’s geological history began more than 250 million years ago. The area was once a low-lying basin that was regularly inundated with a steady stream of eroded mud and sediments from neighboring mountains. After millions of years and thousands of feet of sediment accumulation, this region of the Colorado Plateau was then gradually uplifted. What was once a sea-level floodplain became an upwelling that then rose more than 10,000 feet above sea level.

Relentless erosion from the Virgin River slowly began to chisel away at these uplifted sedimentary layers, creating Zion Canyon. Zion’s walls consist of at least nine layers multicolored strata (formations), ranging from 110 and 270 million years old. Intriguingly, the bottommost Kaibab Formation is made up of 270-million-year-old sediments from what was once the western coast of the supercontinent Pangea. The canyon’s thickest, most prominent layer consists of Navajo Sandstone, which dates to the Early Jurassic period (180 – 185 million years ago), while the uppermost layers include the Temple Cap and Carmel Formations, dating to the Middle Jurassic (165 – 175 million years ago).

Located in the Zion (East Rim) Wilderness, the Stave Trailhead to Deertrap and Cable Mountains can be reached via North Fork County Road, just east of Zion’s East Entrance Ranger Station. The trailhead is about seven miles up a dirt road, and is best suited for high-clearance, four-wheel-drive vehicles. After about six miles on N. Fork Rd, a sharp left on Buck Road heads toward Zion Ponderosa Ranch. This area is private property of the ranch, so be respectful when accessing the trailhead.

The roundtrip hike to Deertrap Mountain from the Stave Trailhead clocks in at 10.5 miles. The spur to Cable Mountain adds just over 3.5 miles to the hike, making the combined distance for both peaks around 14 miles.

The trails to Deertrap and Cable Mountains start at the Stave Trailhead, tucked into a quiet pine forest about seven miles north of Zion National Park’s East Entrance. After quickly opening onto scrubby tablelands, the Stave Spring Trail heads due west then south for about a mile to its junction with the East Rim Trail. Continuing straight towards Deertrap and Cable Mountains, the trail passes near Stave Spring. In the early 20th century, the spring was the site of a sawmill that produced timber for construction within the canyon. Today, however, all that remains is a lone pipe that provides clean water access for backpackers and campers. 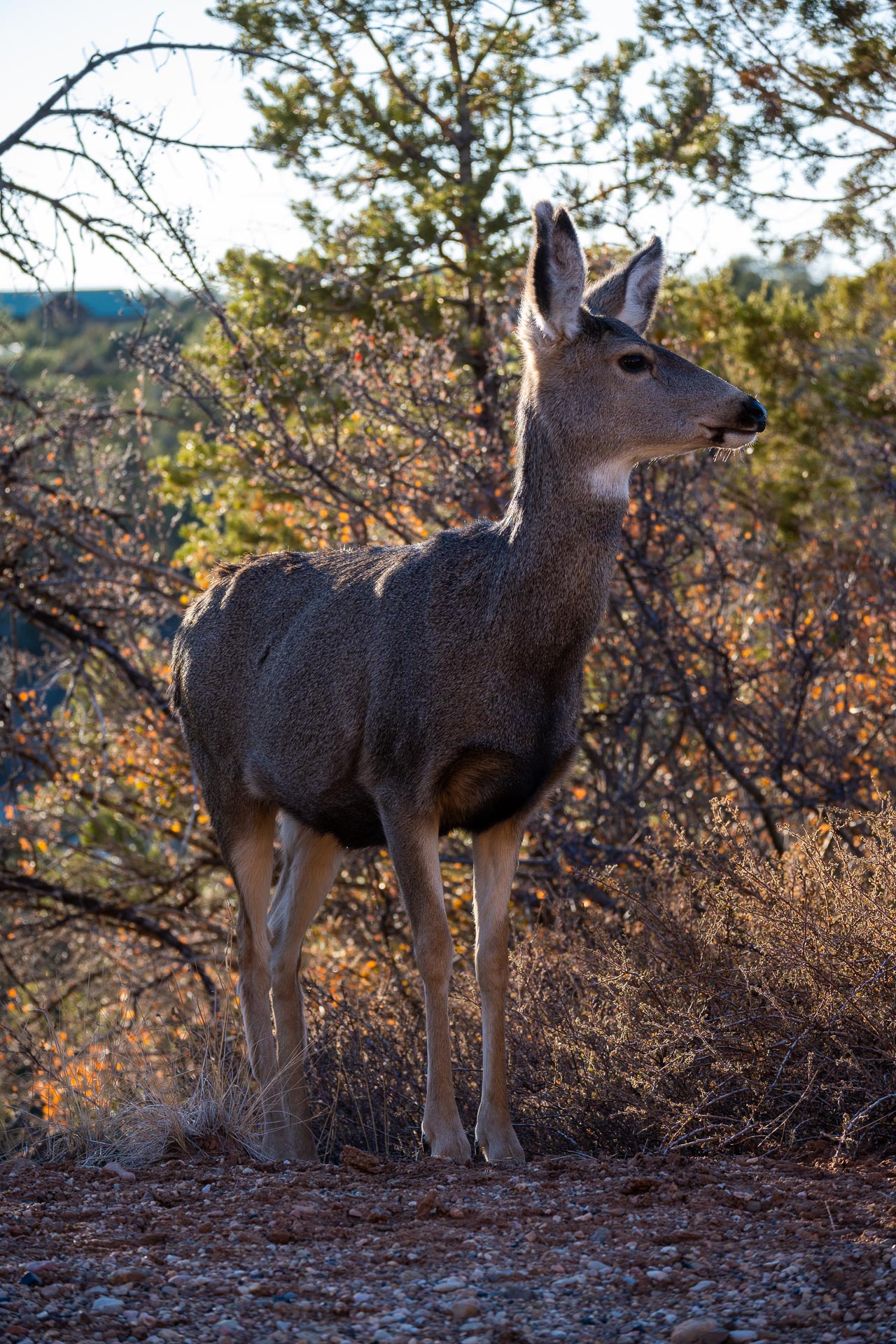 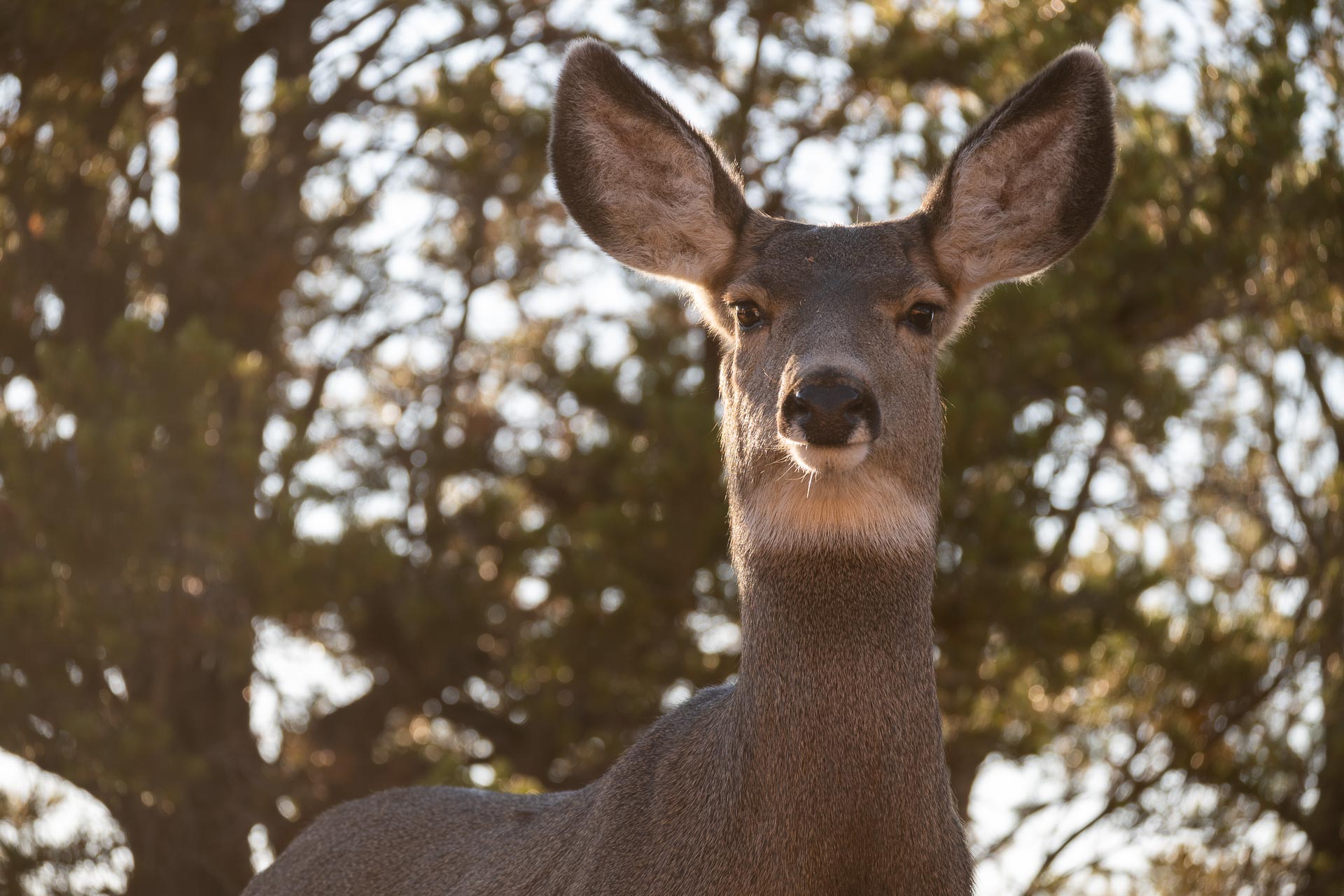 About a mile further down the trail, a signed junction points the way to Cable (to the right) and Deertrap (straight) Mountains. Continuing toward Deertrap Mountain, the trail rises and falls through scrubby grasslands and Ponderosa pine forests. As the path turns toward the west, it eventually begins to skirt the eastern rim of Zion Canyon. The Mountain of the Sun and East Temple suddenly come into view to the south, with the canyon and Virgin River unfurling below you. Looking west across the gorge, the jagged ledges of Isaac Peak and Lady Mountain are almost blindingly beautiful. To the south of Isaac Peak, you can just make out the tiny crown of The Sentinel. The views here are sweeping, and this was without question one of my favorite spots in Utah. 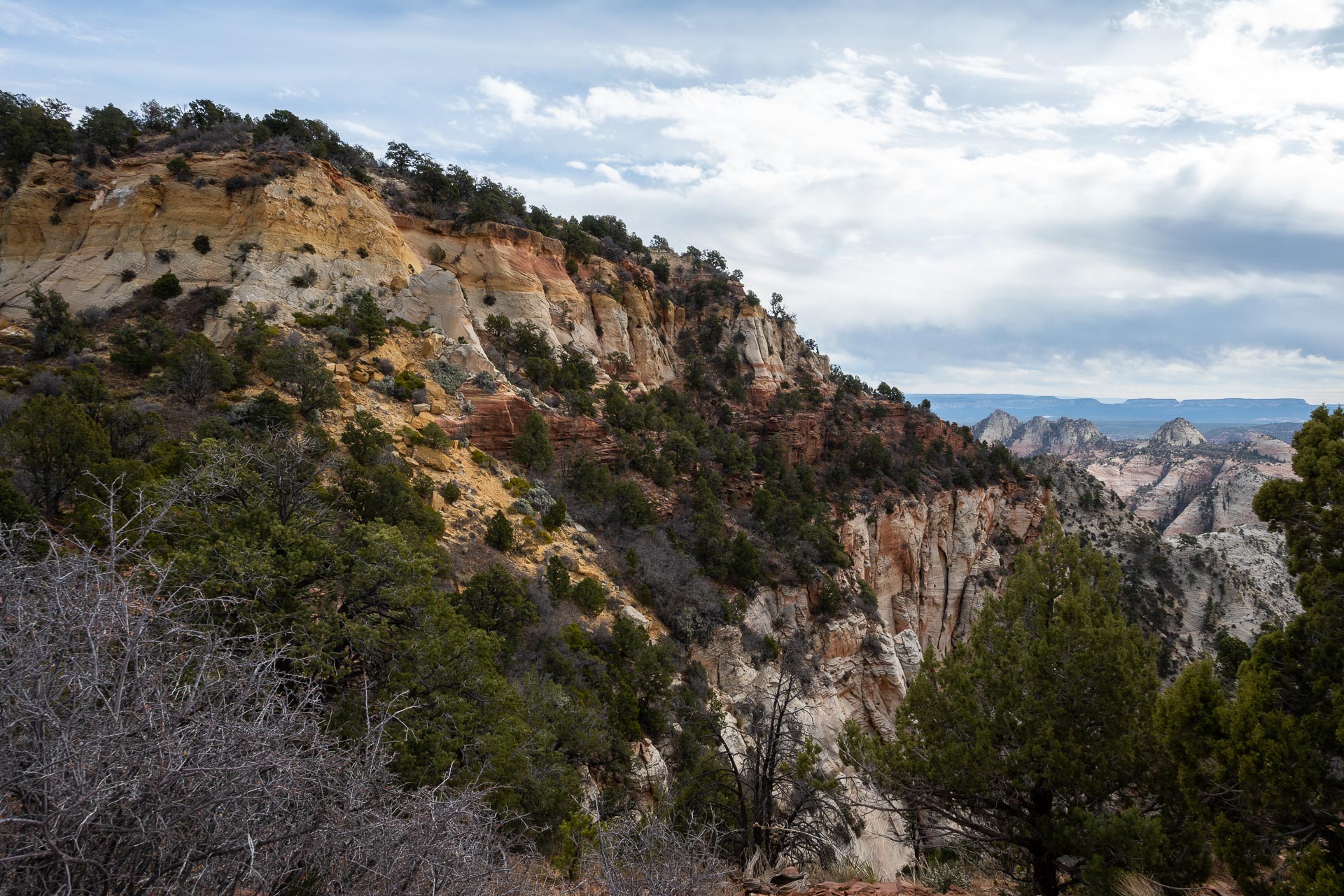 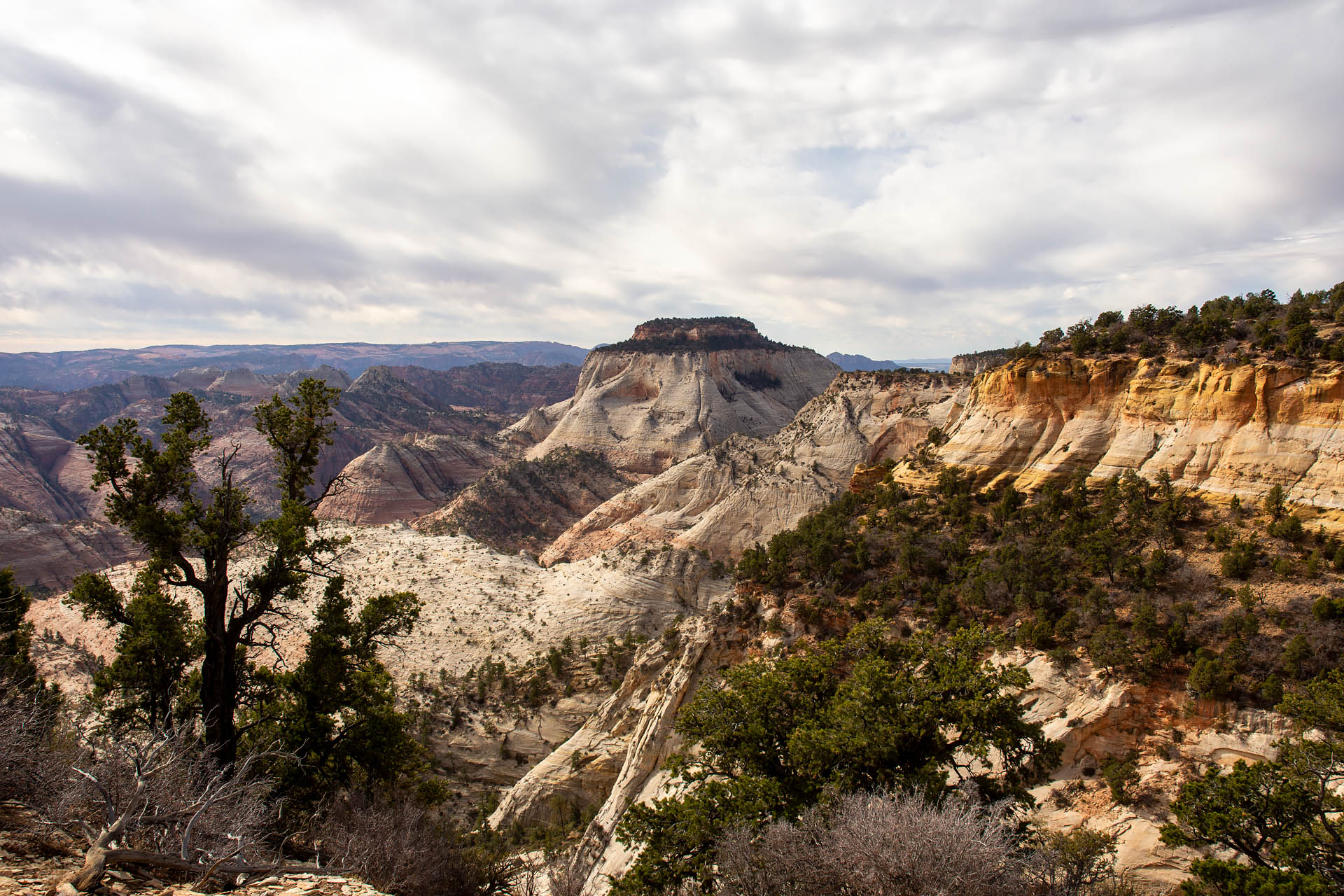 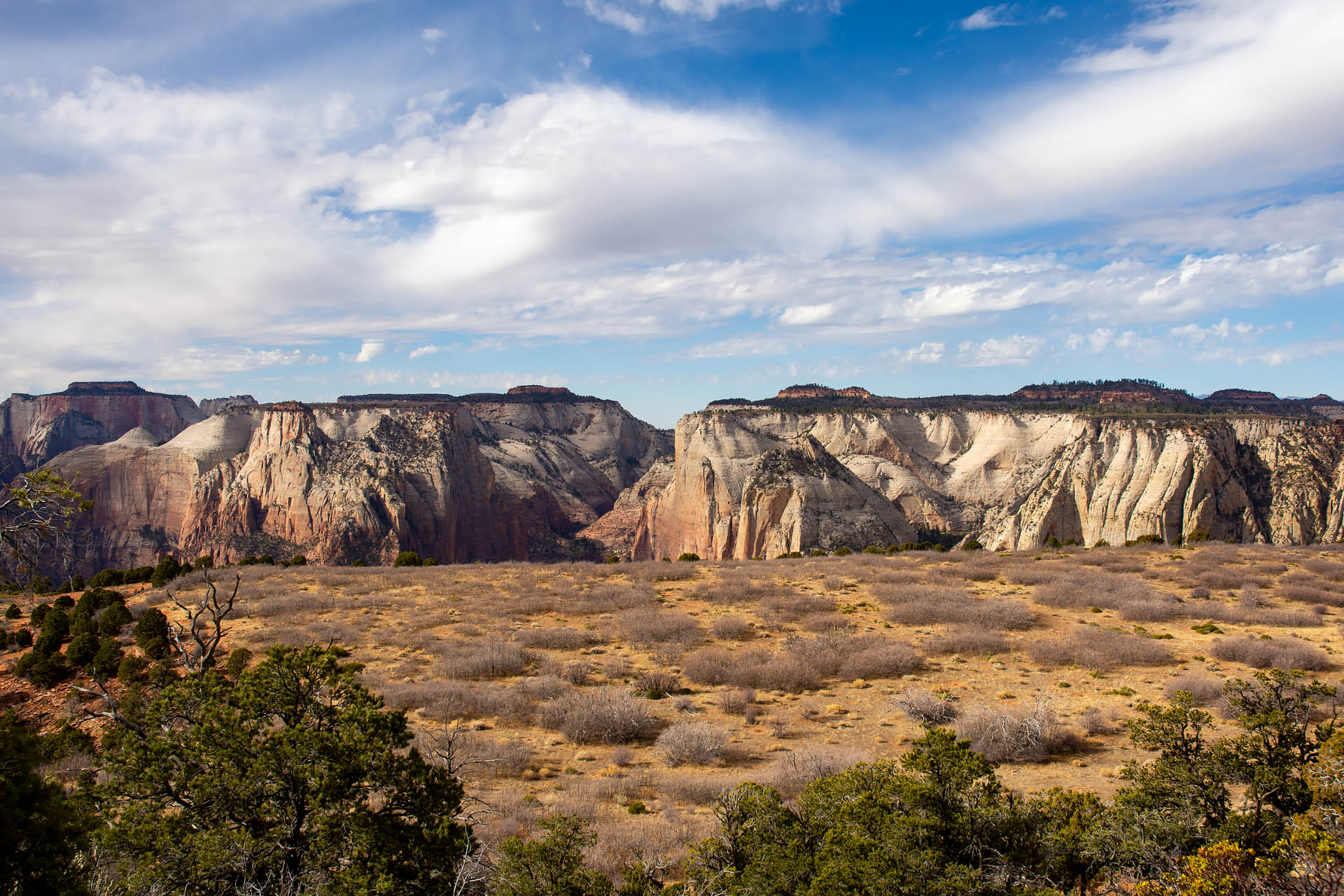 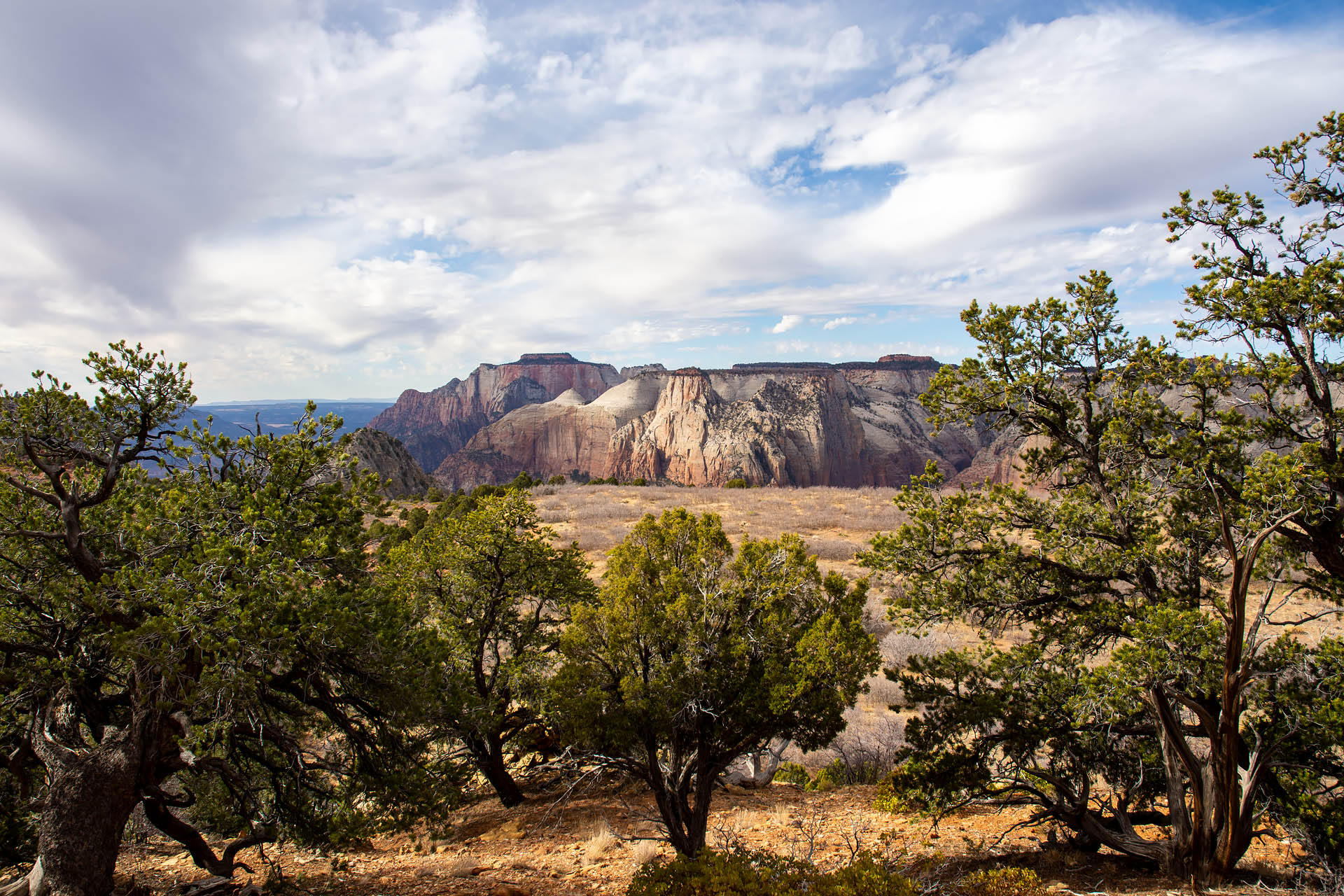 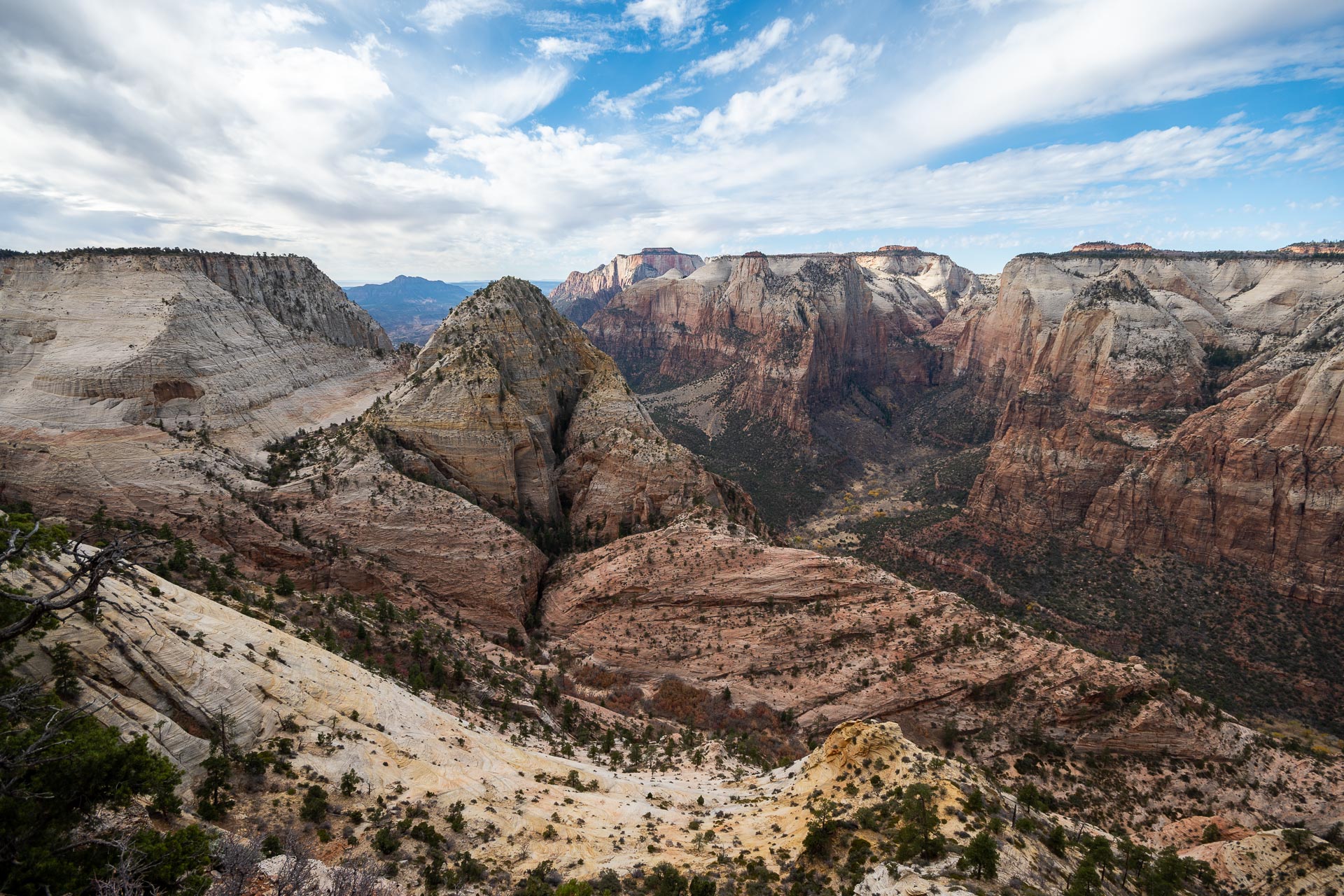 The narrow path then turned northward, continuing to hug the canyon’s rim for the next half mile. Our eyes were fixed on the imposing cliffs beside us. We weren’t expecting scenery quite like this, and being the only ones on the trail only added to the overwhelming beauty. The trail finally terminated atop Deertrap’s highpoint – a rugged outcropping that jutted out into the canyon alongside the Great White Throne, another of Zion’s many named rock formations. 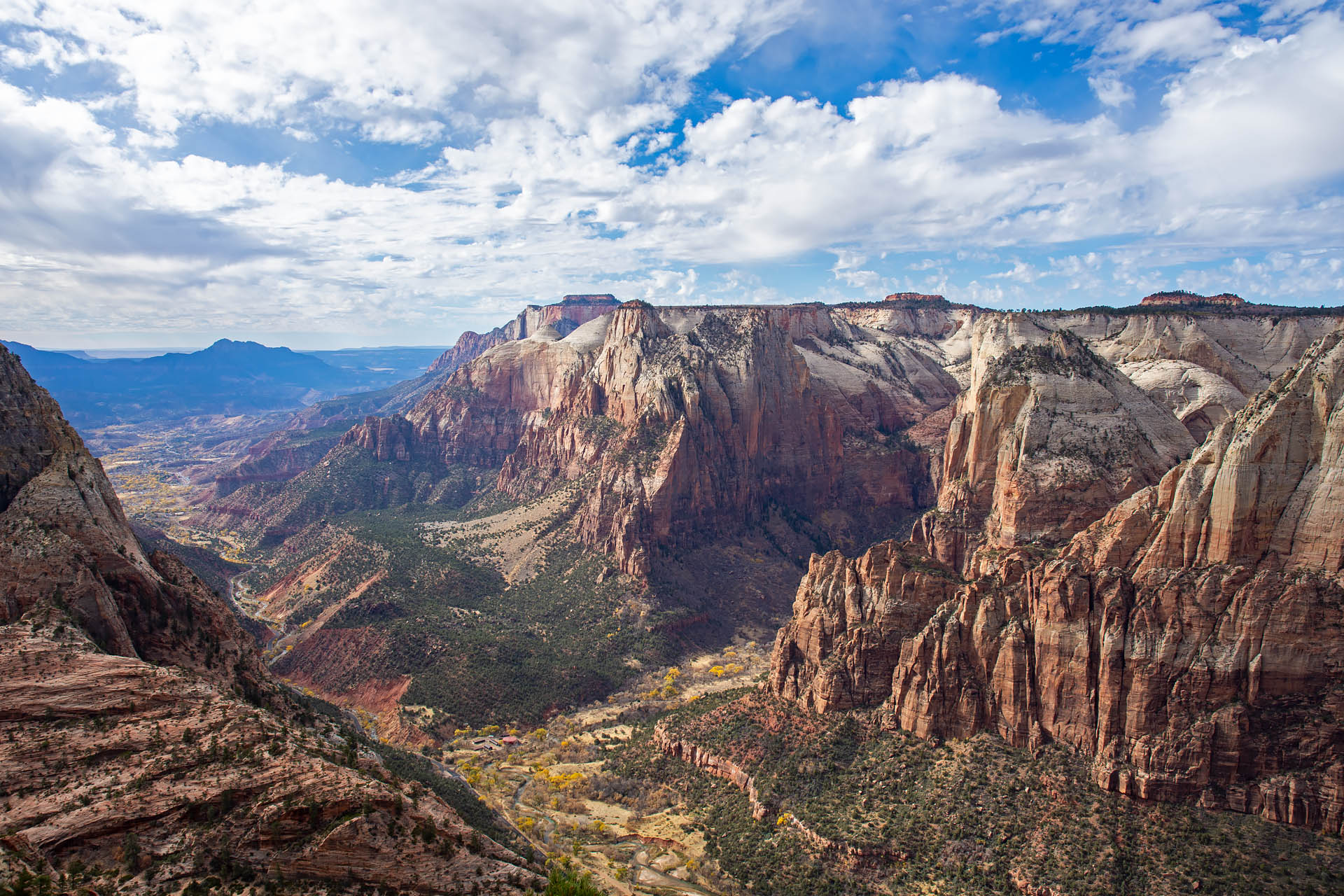 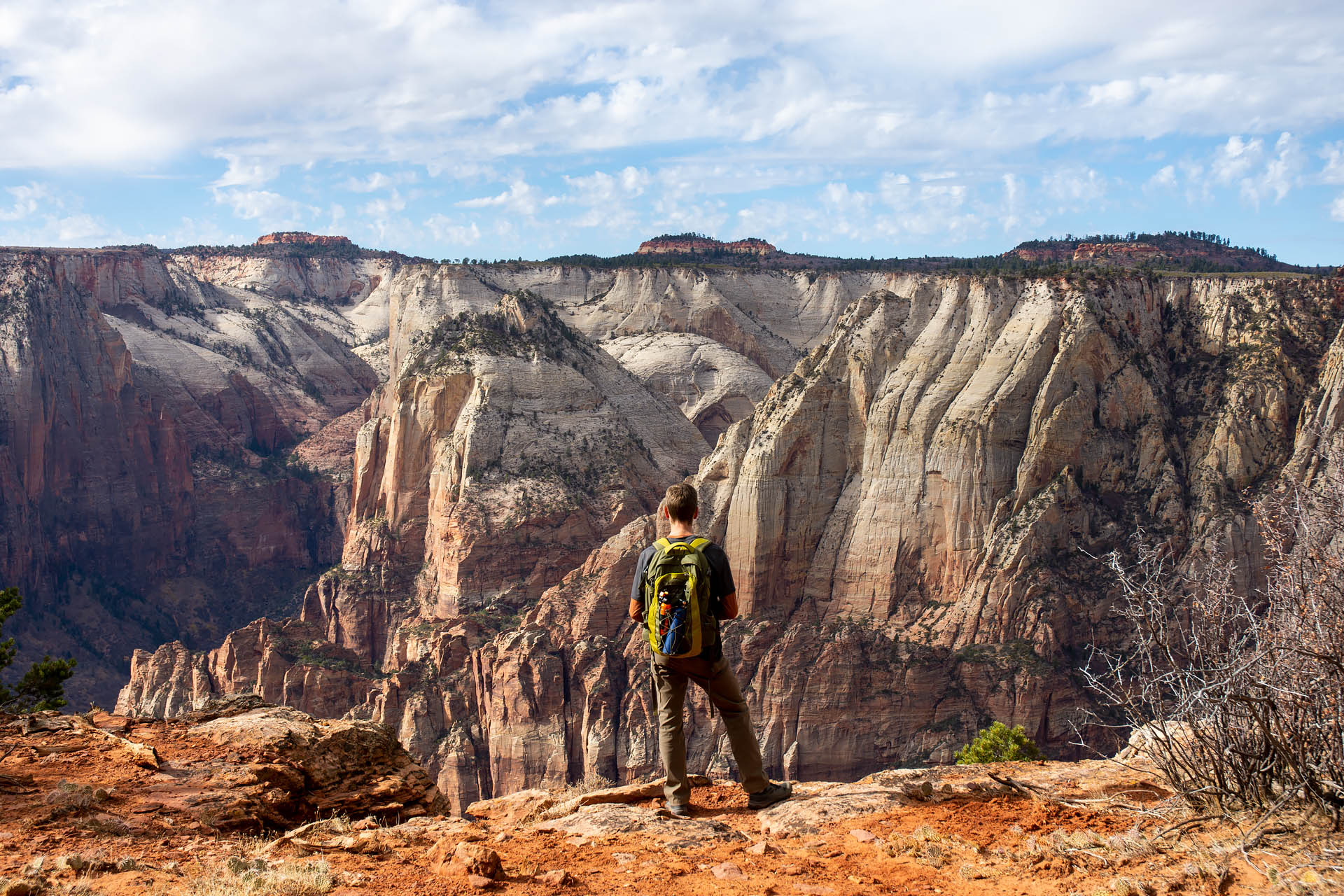 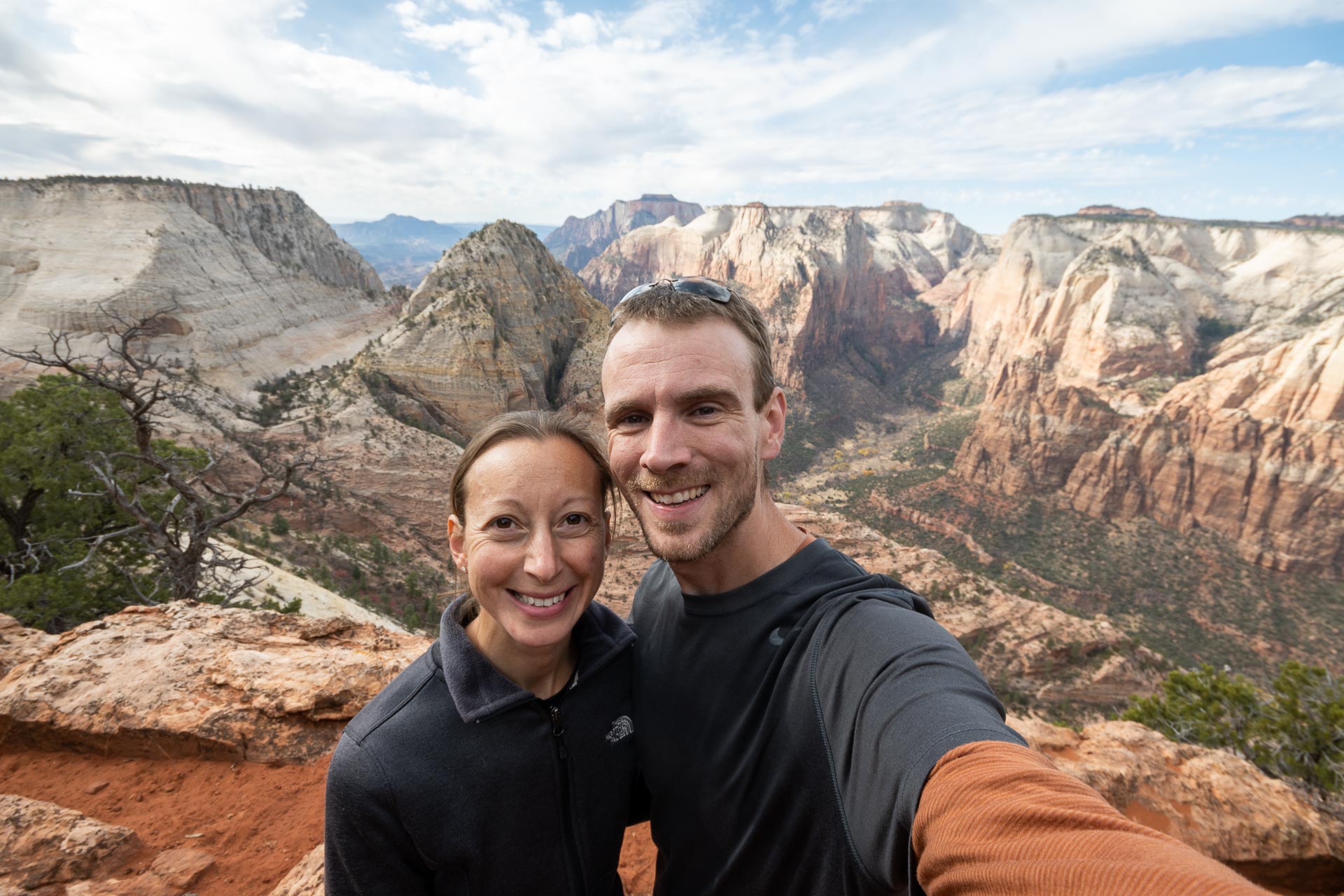 After stopping for a scenic lunch atop the rocky projection, we eventually headed back along the same route toward Cable Mountain. We retraced our steps for just over three miles until we reached the Cable Mountain junction. Turning west toward the second summit, the spur trail descended moderately through pine forests until it opened onto a small clearing, losing around four hundred vertical feet over the 1.8-mile track. 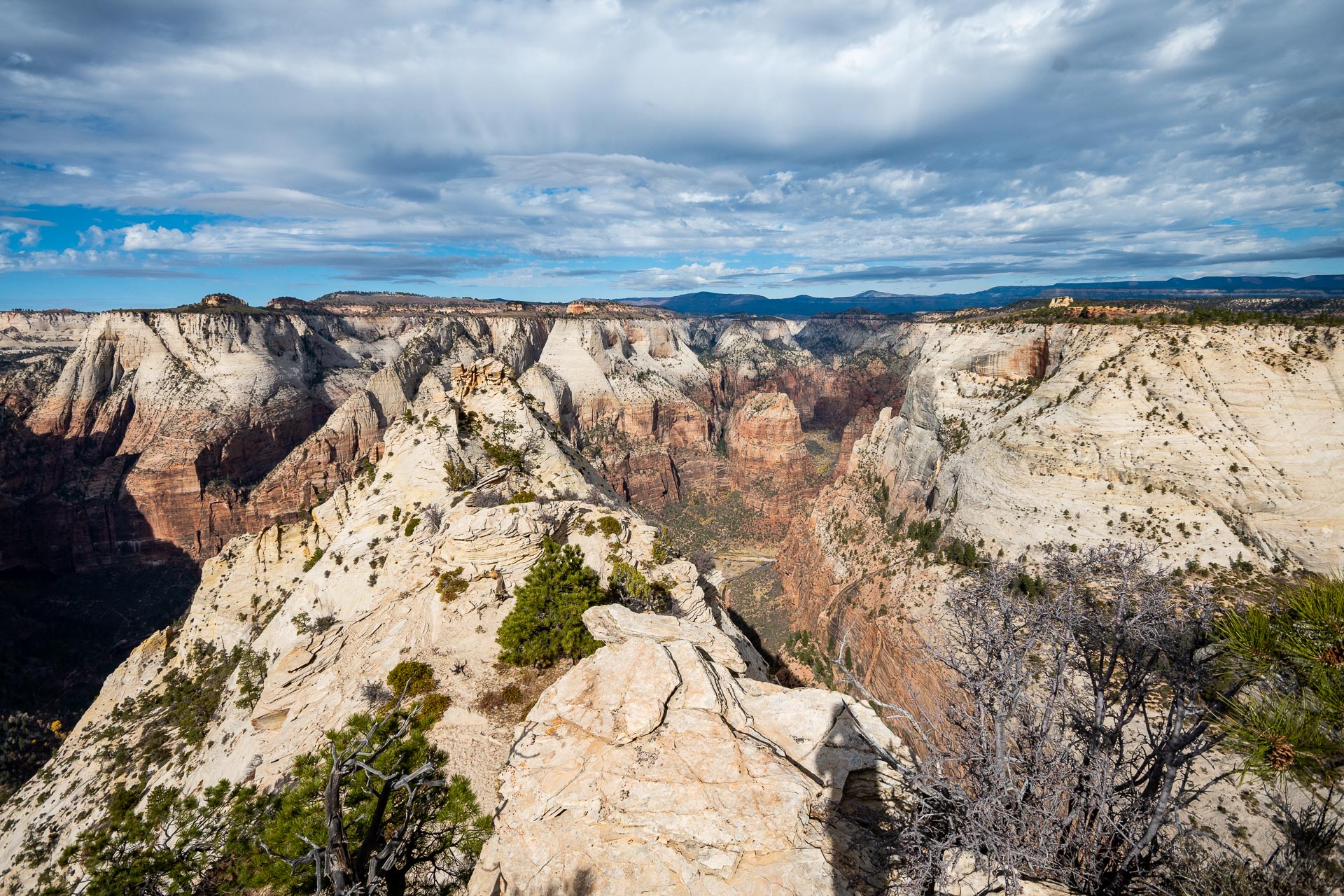 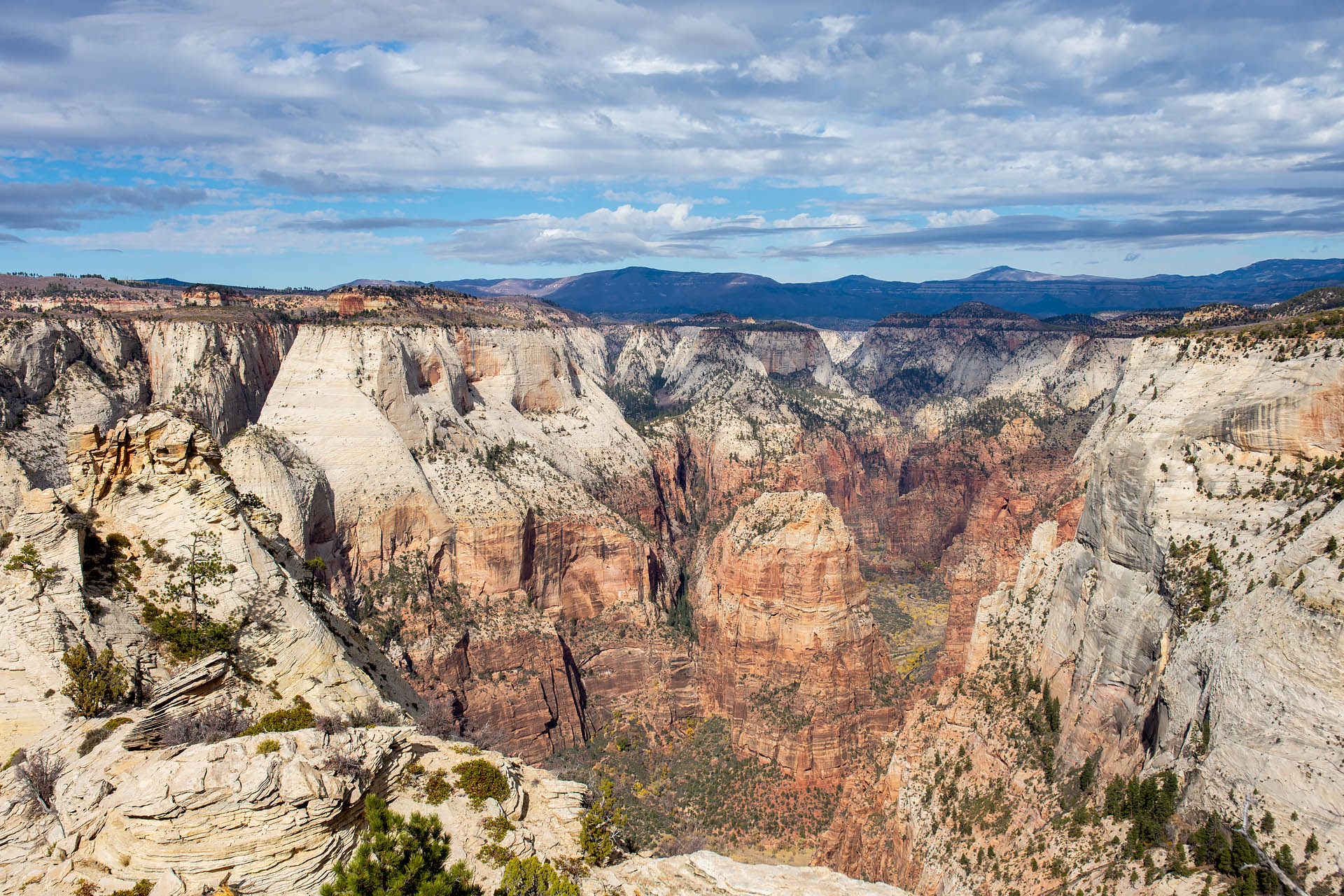 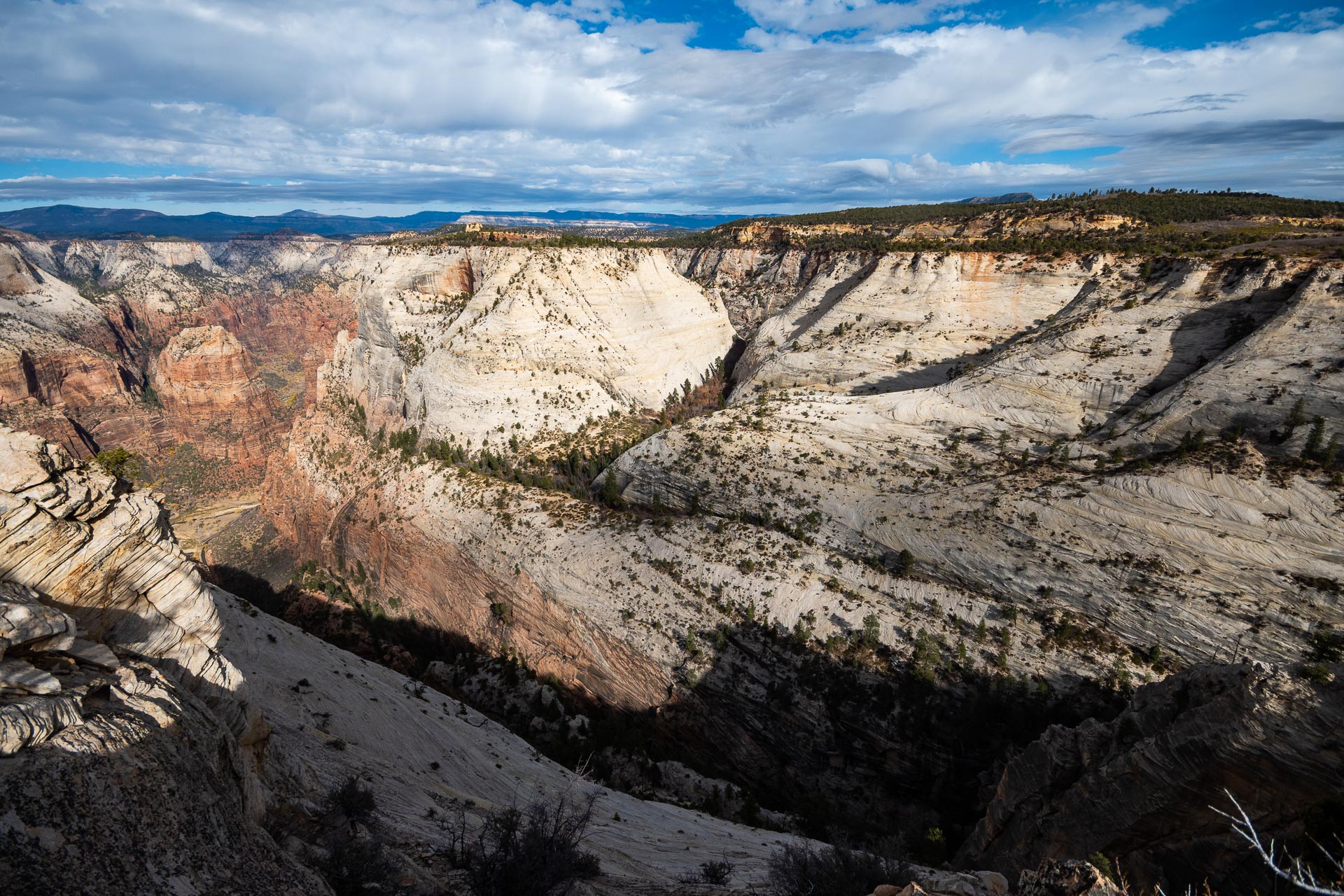 When we reached the clearing, we immediately noticed the massive, wooden frame of the historic Cable Mountain Draw Works. Built in 1901, the Draw Works were designed to move lumber more efficiently from Zion Canyon’s east rim to the valley floor. Hauling lumber from the high mesas was an arduous task, taking a week or longer to traverse the steep terrain by wagon. Cable Mountain’s innovative pulley system transformed that process, allowing timber to be lowered 2,000 vertical feet to the canyon floor in just two minutes. The Draw Works continued delivering lumber from the nearby sawmill at Stave Spring to sites within the canyon until 1927, including the timber that was used to build the original Zion Lodge. After the structure was hit by lightning and fires in 1911 and again in the 1920s, however, the operation was ultimately abandoned. 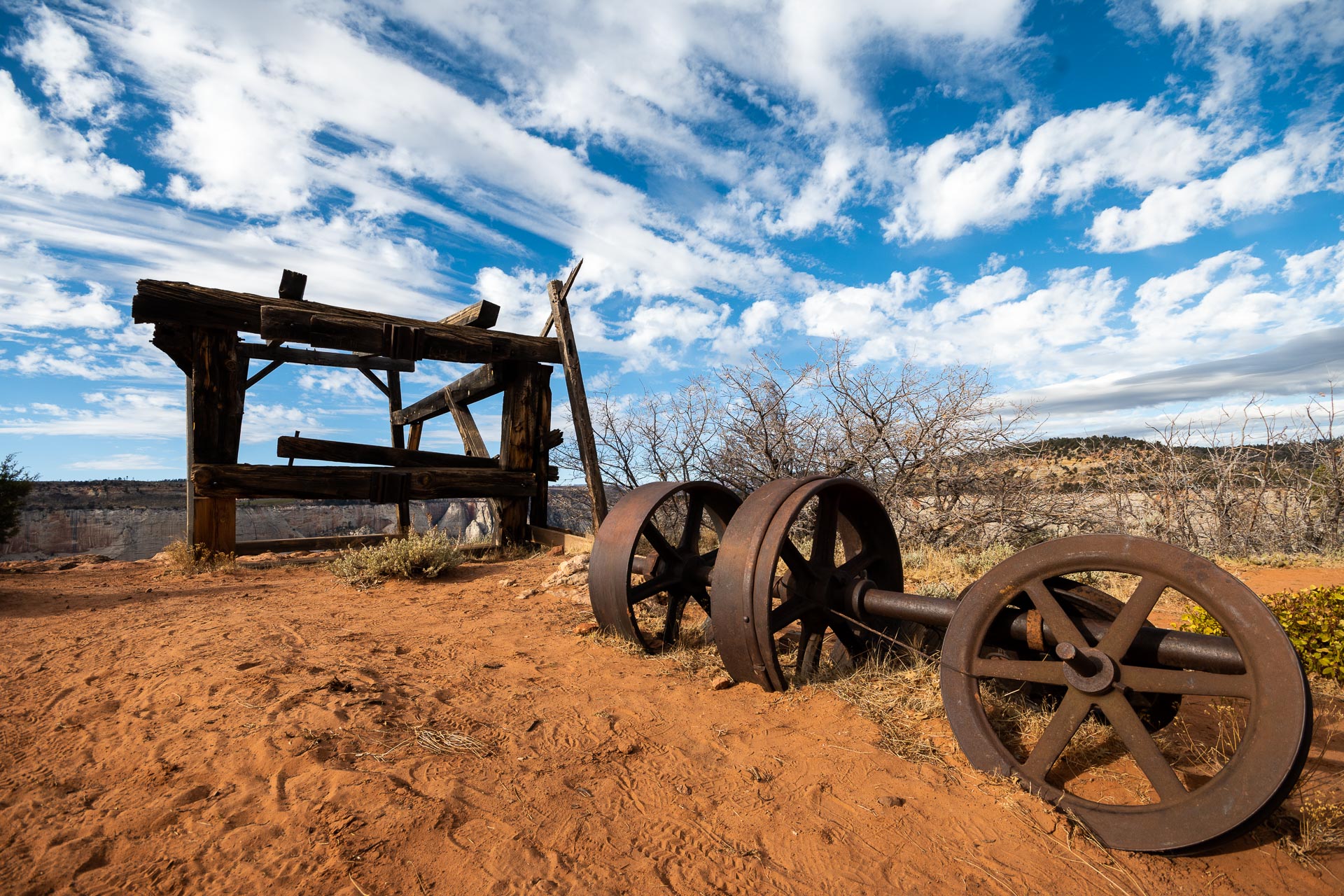 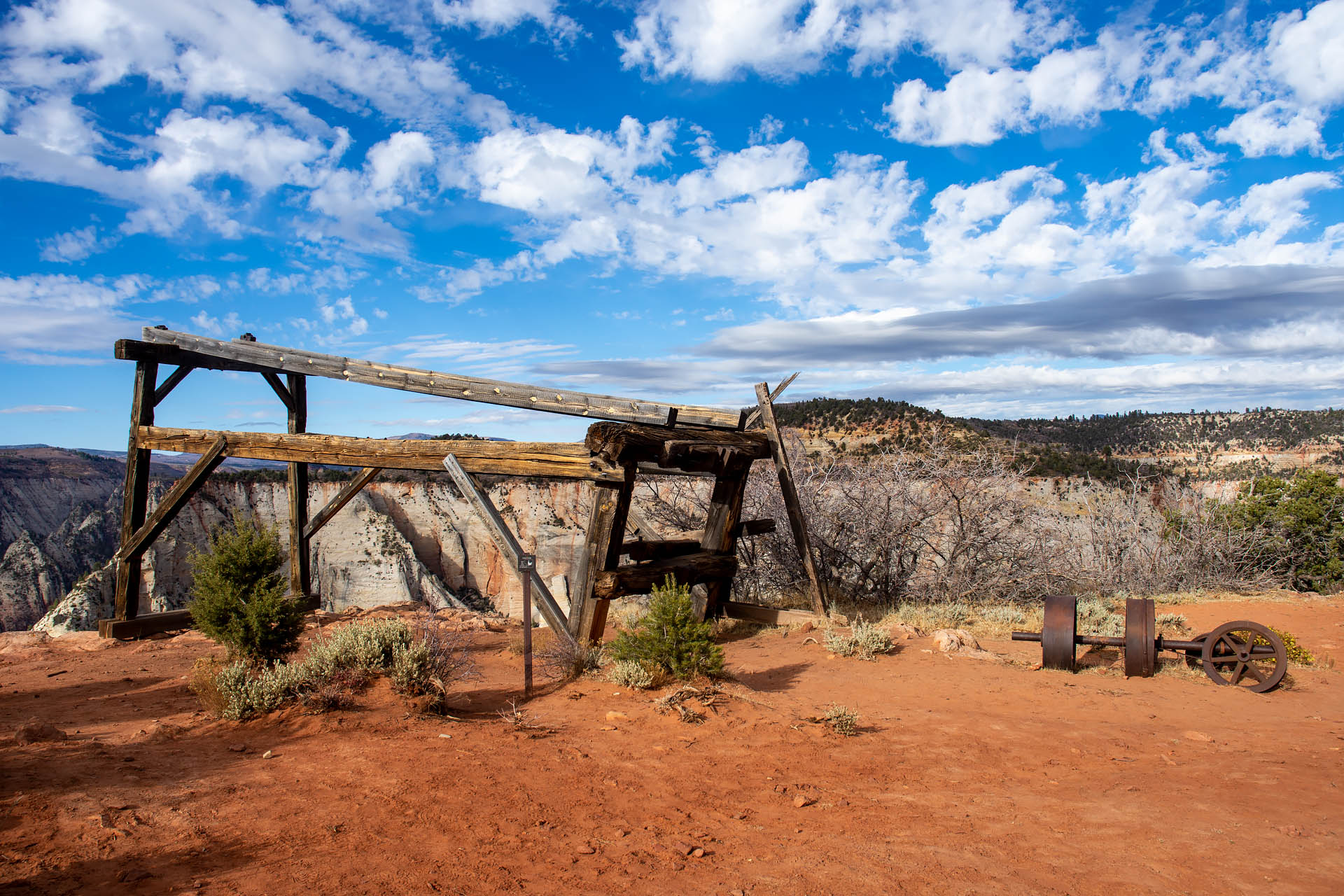 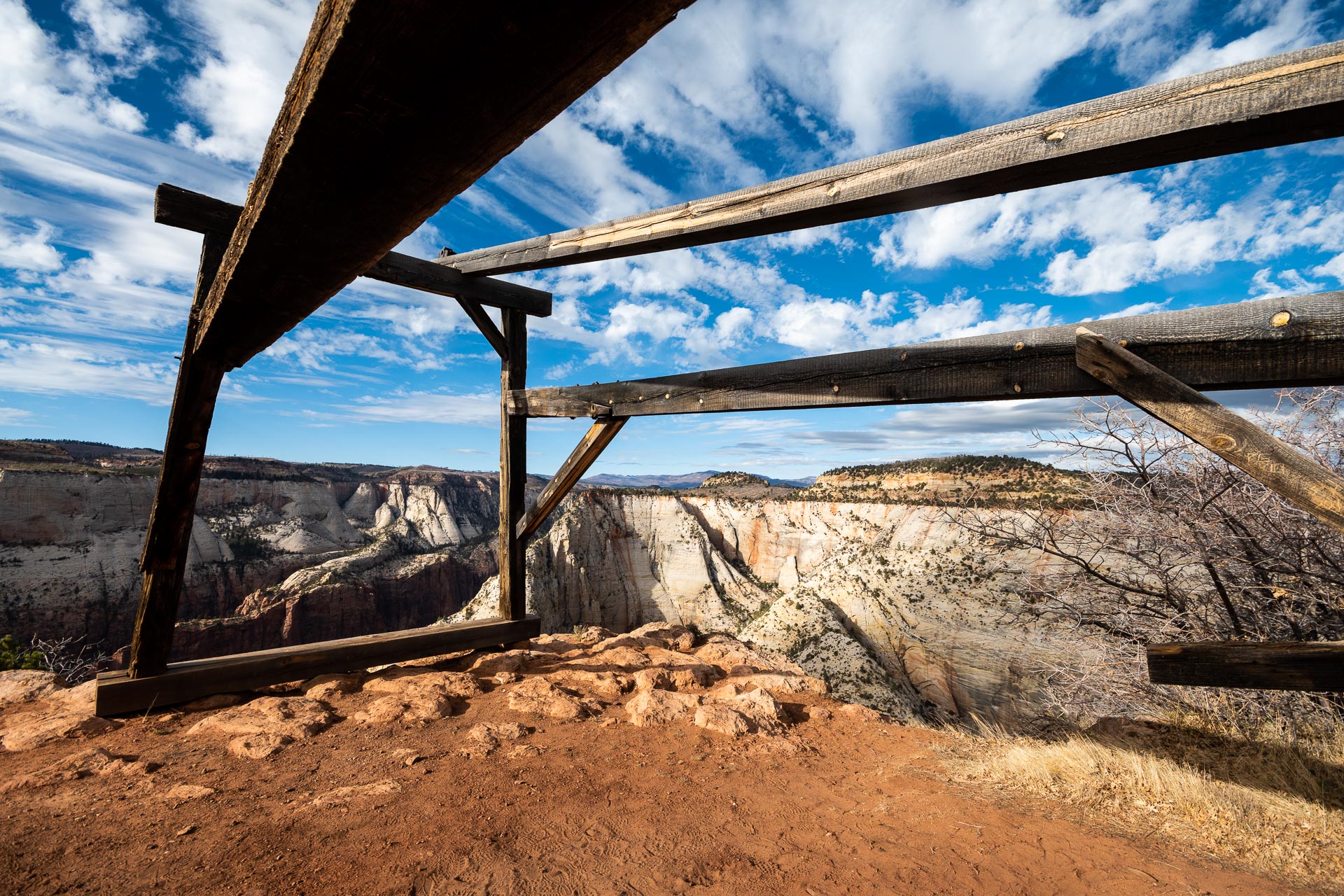 In addition to its interesting piece of history, Cable Mountain also offers a gorgeous look down into the canyon. While the views here don’t quite compare to Deertrap Mountain’s endless panoramas, the highpoint does afford a truly unique perspective of Angel’s Landing. From here you can see the razor-thin knife-edge as it cuts into the canyon, with the white walls of Mt. Majestic soaring behind. 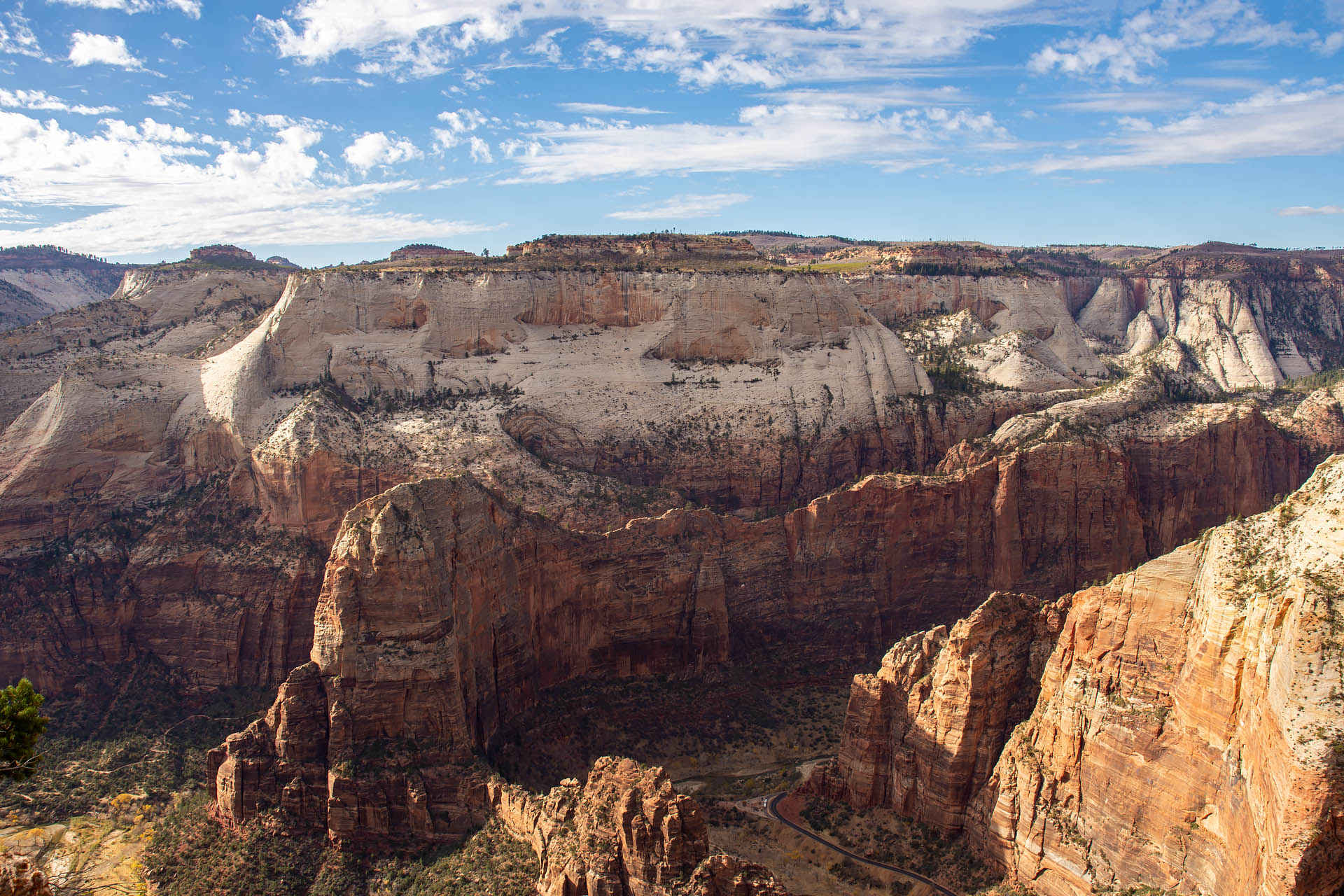 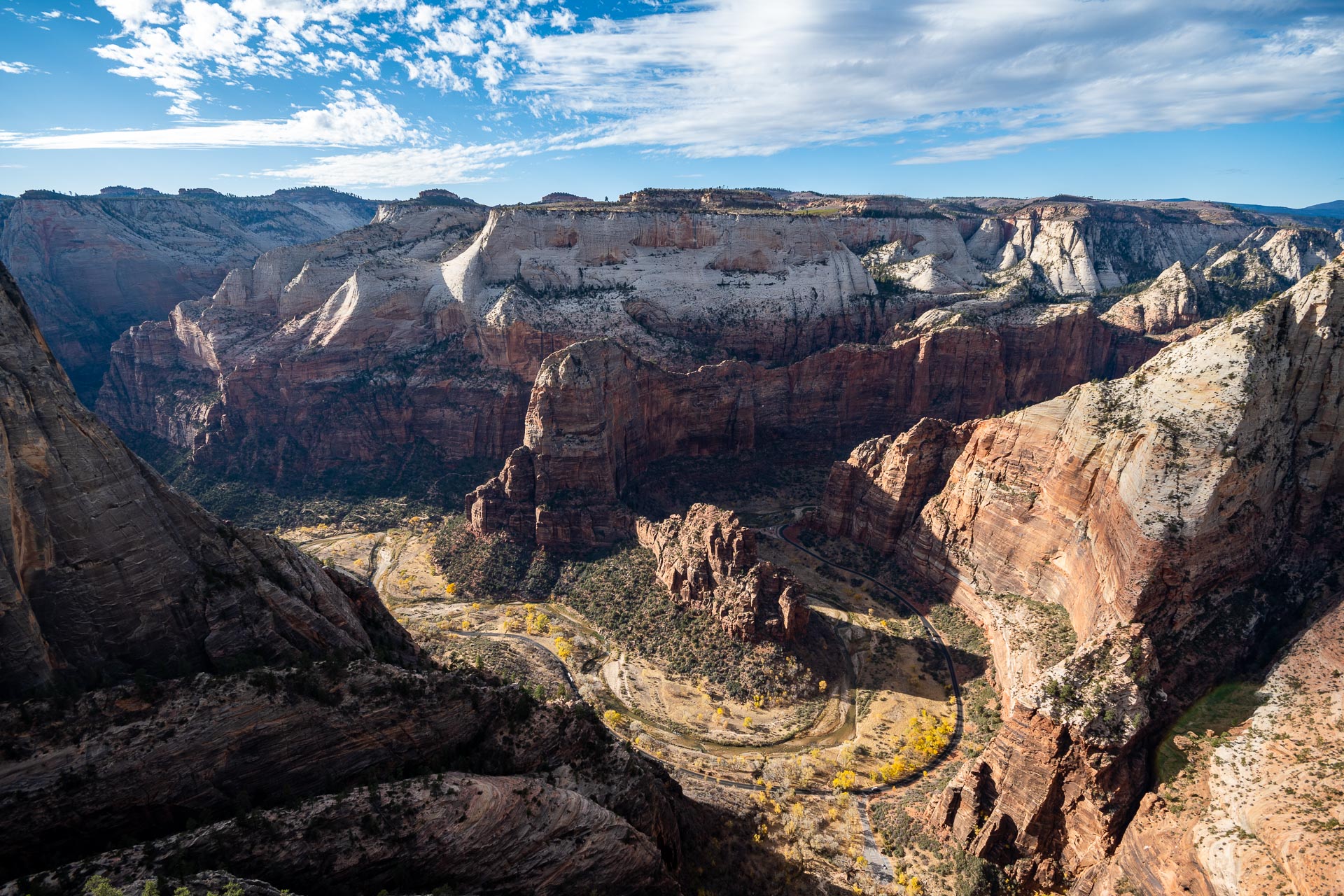 While Stephan and I love exploring our national parks, we regularly find ourselves lamenting how crowded many of the frontcountry areas have become. Because of this, we were felt even more grateful to have found a trail through Zion’s East Rim Wilderness that afforded us such serenity and unspoiled beauty. Though it may not be the perspective many are looking for when visiting the canyon, we were beyond satisfied to sit and enjoy Zion’s grandeur from above. 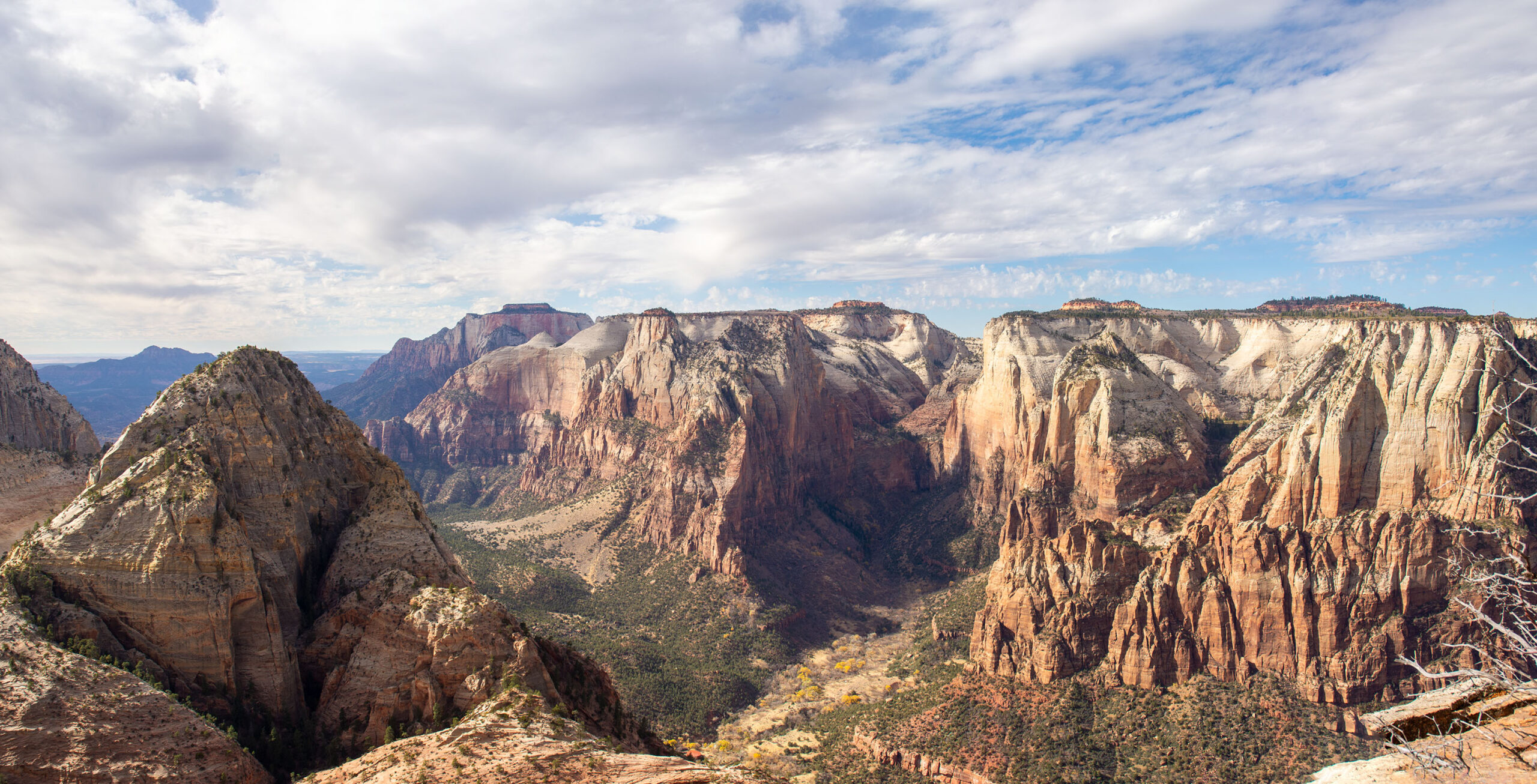 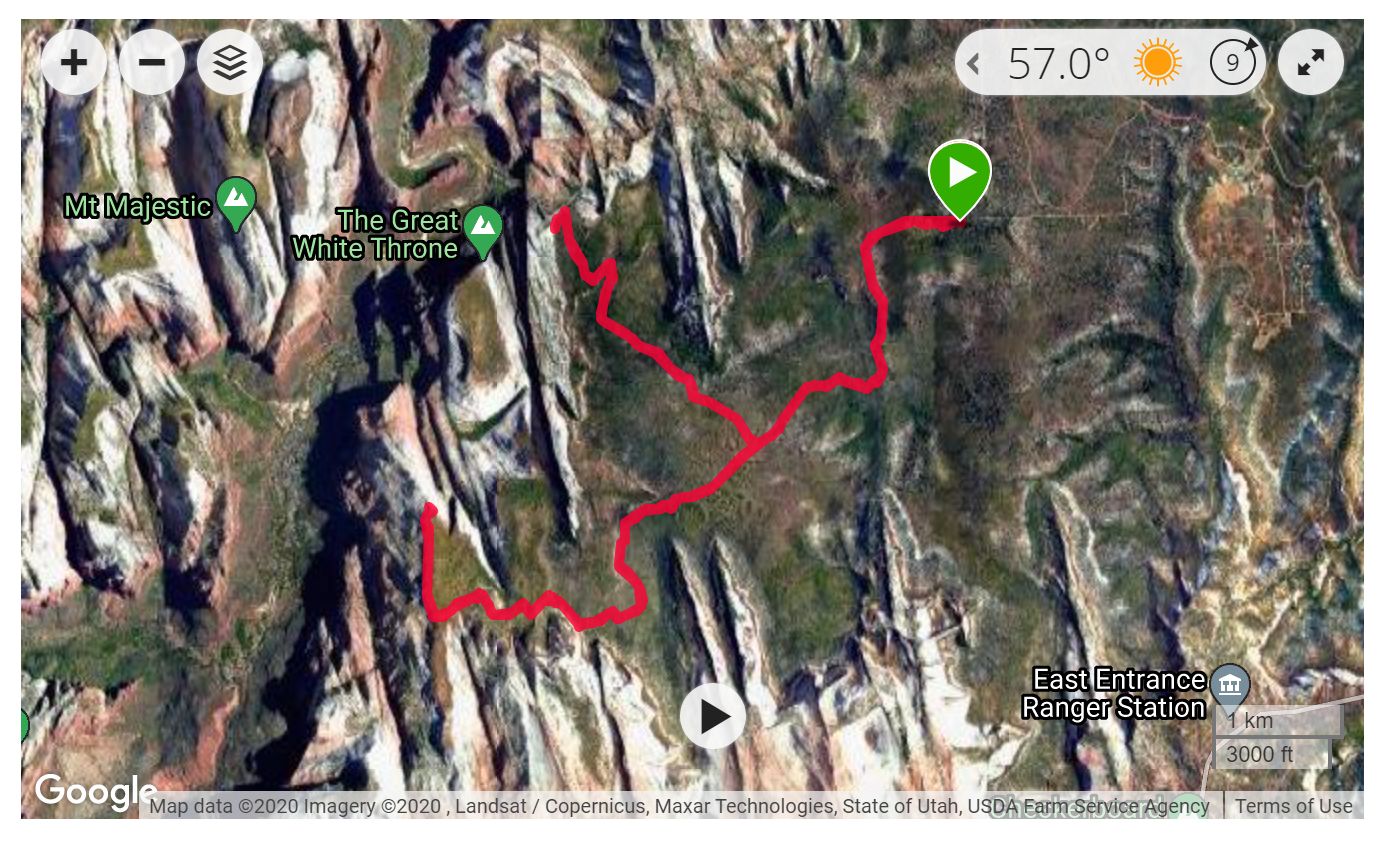