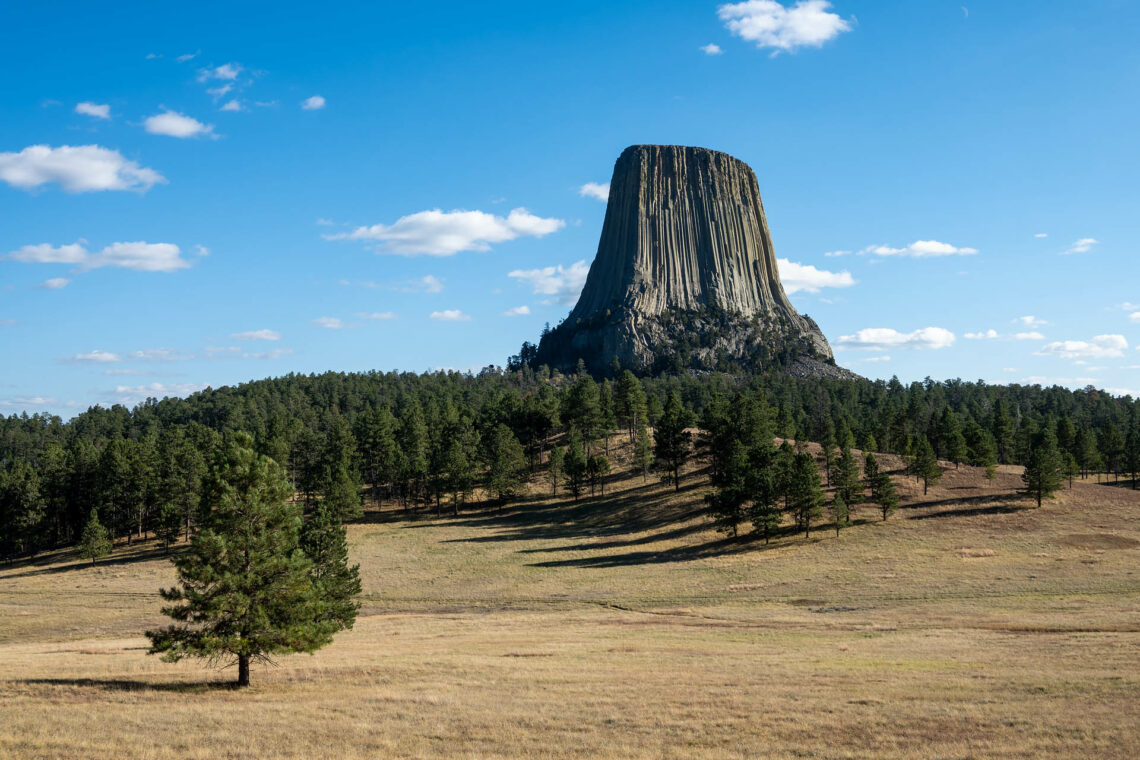 Devils Tower is one of the country’s most recognizable landmarks, and rightly so – the monolith rises strangely from the prairies of northeastern Wyoming just a couple hours west of South Dakota’s Black Hills. After ratifying the Antiquities Act, a law that would protect sites of cultural, historical, and natural significance, conservationist President Teddy Roosevelt declared Devils Tower our country’s first national monument in 1906.

Soaring over the grasslands and Belle Fourche River, the 867-foot tower was formed during a period of volcanism roughly 50 million years ago. While the monolith’s exact formation is still a bit of a mystery, geologists largely agree that it’s some type of igneous intrusion – a feature formed when magma is forced up from Earth’s mantle and becomes trapped in surrounding layers of rock. As the molten rock gradually cooled, contracted and fractured, the Tower’s distinctive array of pentagonal and hexagonal columns was formed.

When the monolith first took shape 50 to 60 million years ago, it lay an astonishing one to two miles below the Earth’s surface. It took millions of years of erosion to unveil the striking sculpture we see today. Incredibly, although the rock itself is much older, it’s estimated that Devils Tower has only been uncovered for one to two million years.

While the name ‘Devils Tower’ may sound imposing, the modern moniker is a far departure from its Native American origins. To ancestral Plains Indians tribes who inhabited the region for ten thousand years, the monolith was known as Bear Lodge. Numerous legends describe the Tower’s creation, though most claim the deep furrows were the result of a bear clawing at the rock. The name Devils Tower only came into existence at the end of the 19th century when a team of white explorers and mapmakers incorrectly published the appellation. Historians aren’t sure if this was a deliberate act or a mistake. Maps at the time did identify the landmark as Bear Lodge, so it’s plausible the name change was intentional. Conversely, because the words for black bear and evil spirit sound similar in Lakota language, the name change could have been a mistranslation. While the name Devils Tower clearly stuck, there have been motions to restore Bear Lodge’s original and culturally significant title. 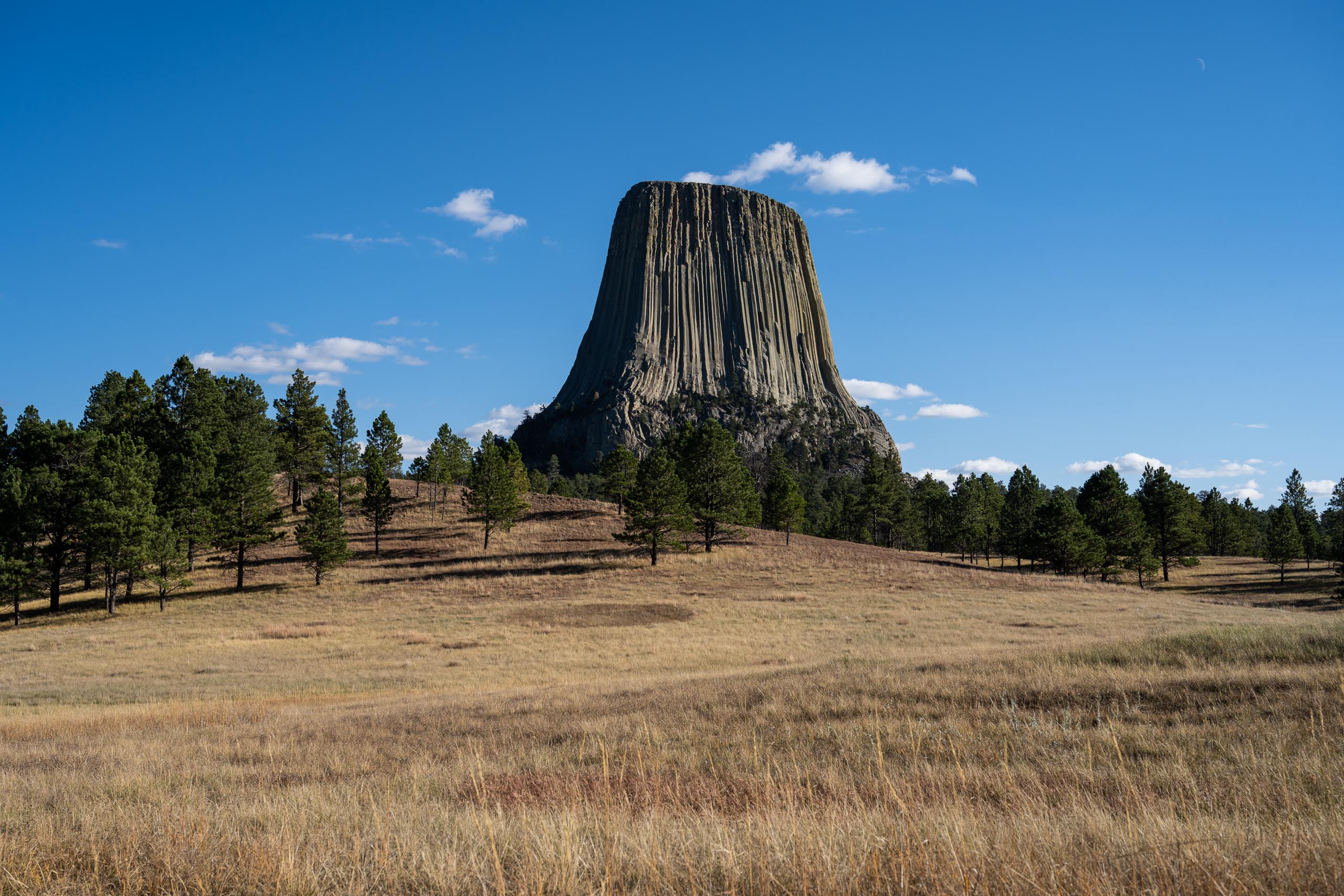 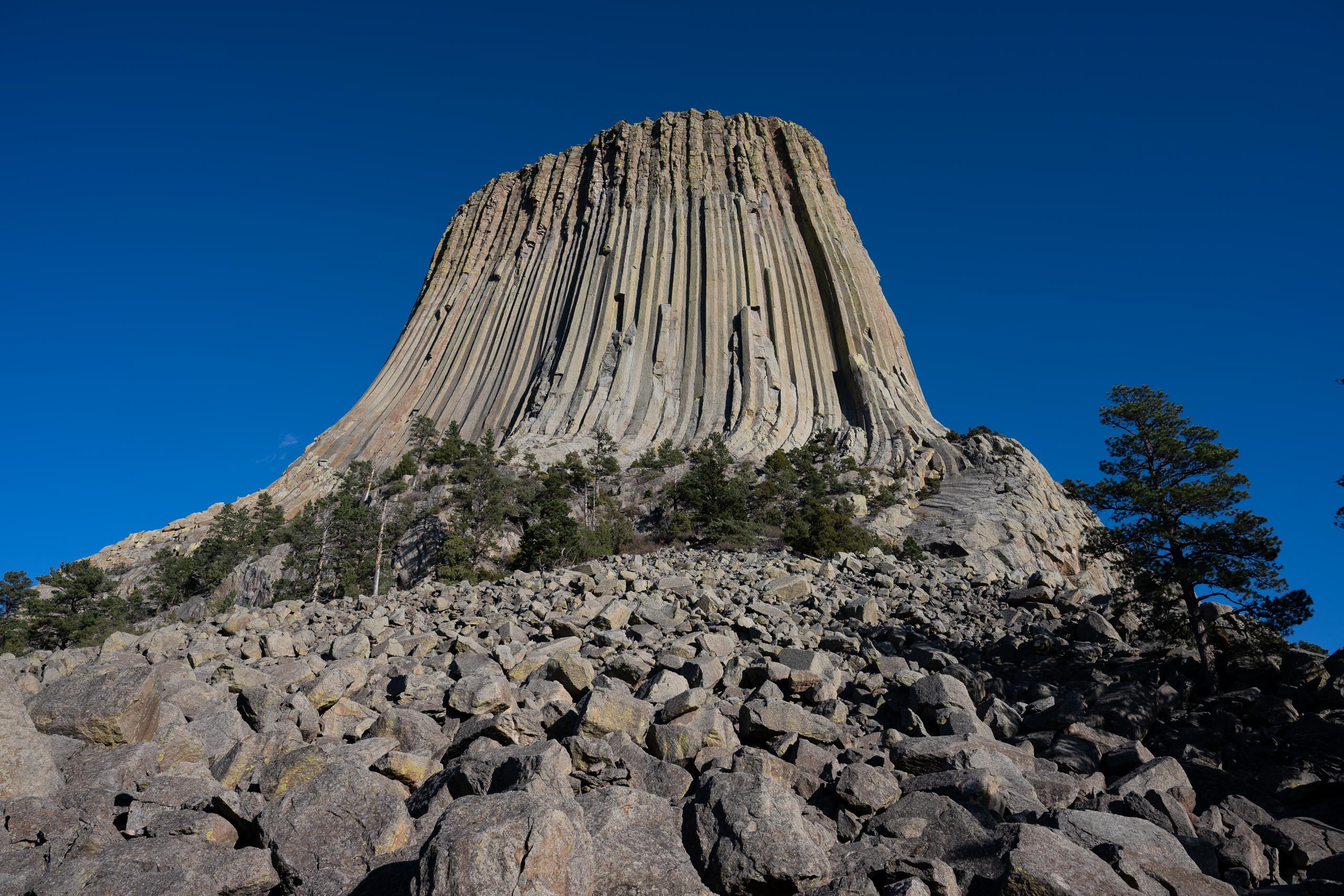 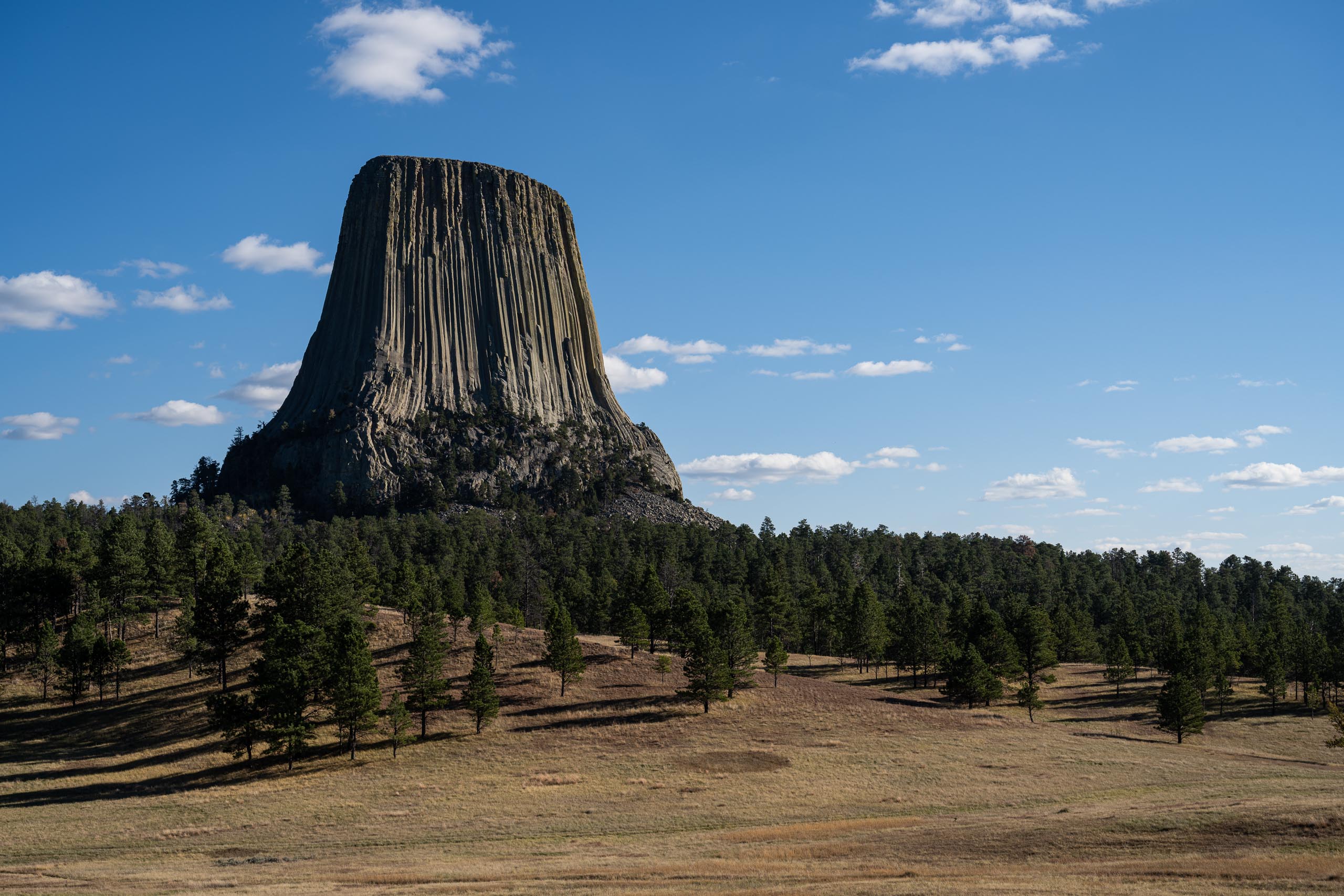 If you’re interested in getting a closer look at Devils Tower (Bear Lodge), the recreation area offers five trails totaling about eight miles. Wanting to check out the monolith from a variety of vantage points, we chose to combine three of the trails to make one large circuit. Our seven-mile route included the Devils Tower Trail (1.5 miles), Red Beds Trail (2.8 miles), and Joyner Ridge Trail (2.8 miles including a short connector). If you’ve got a few hours to poke around, we thought this was a nice way to really get a sense of the Tower’s scale and unusual geology. If you’ve got less time, we’ve broken down some of the highlights of each individual trail below.

By far the most popular trail in the park, the Devils Tower Trail is a 1.5-mile paved walkway that encircles the monument’s one-mile (circumference) base. When we visited in mid-October, the path was busy but not agonizingly crowded. That said, there were enough people that we imagine this trail would be a veritable hell in the peak of summer. Clearly most visitors want to get a closeup look at the lofty, geometric columns. And while it’s certainly a unique vantage point, we ultimately found ourselves drawn to the more distant views from Red Beds and Joyner Ridge. 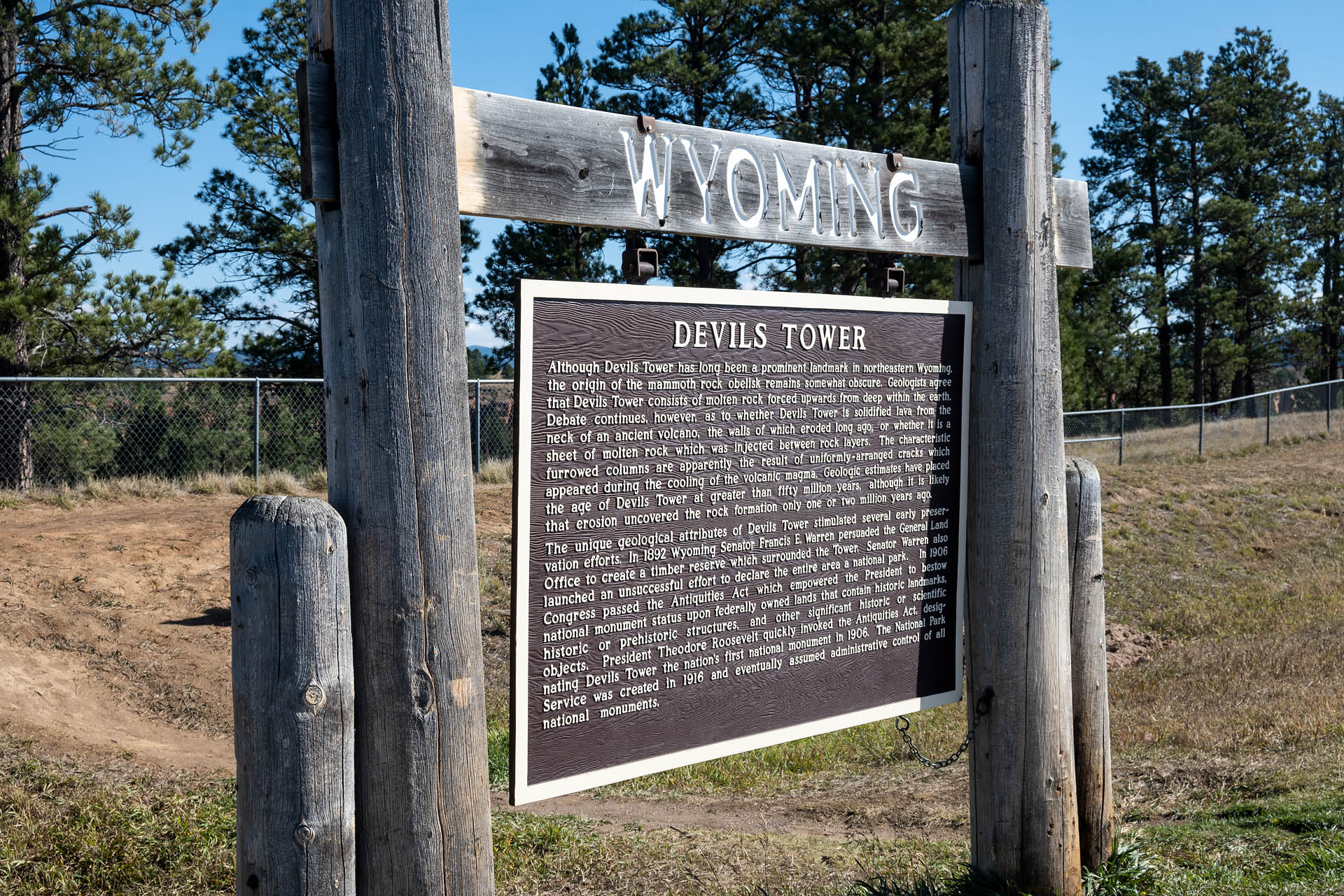 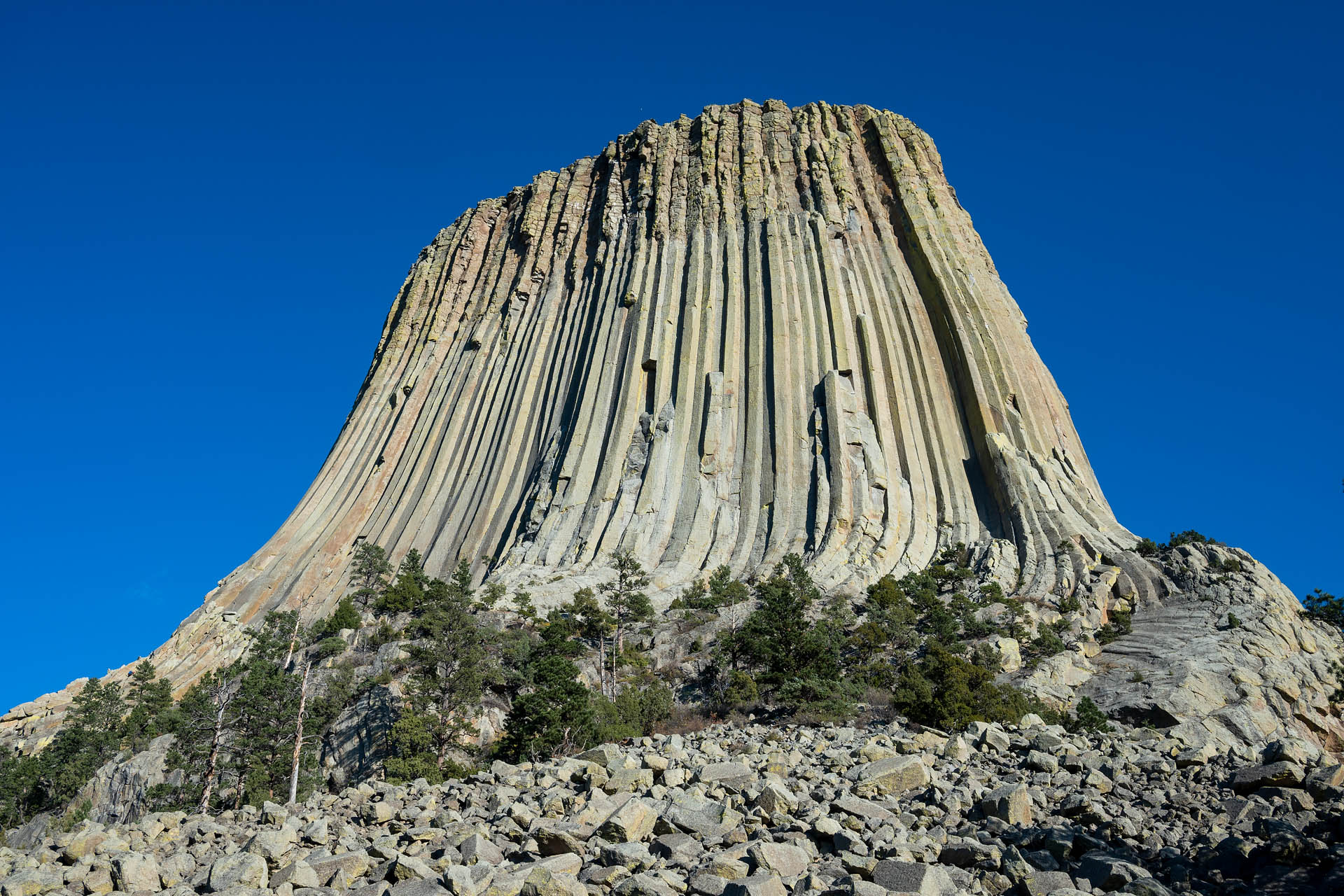 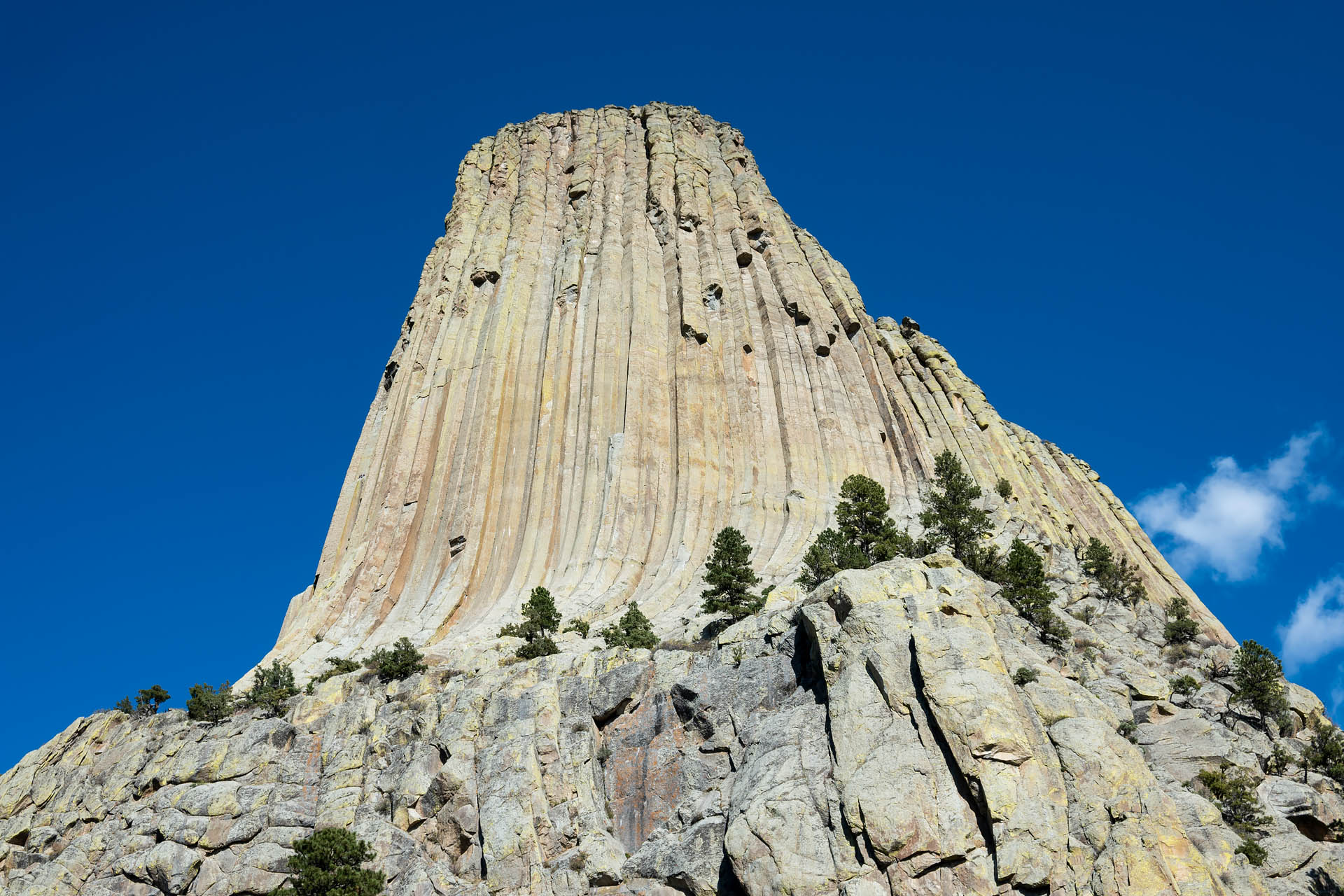 A 2.8-mile loop, the Red Beds Trail is a larger circuit that also encircles Devils Tower, though at a slightly greater distance than the main paved trail. Most of the trail runs east of the megalith, and the views looking back to the west afford a nice glimpse at rock’s bowed southern face. Because it’s a bit further from the Tower, the views of the monolith do come and go as the trail winds through some more densely forested sections. That said, there are some scenic views of the Belle Fourche River Valley to the east. The landscape along this route is a bit more diverse and, unlike the more highly-trafficked Tower Trail, we were excited to run into only a few other people. 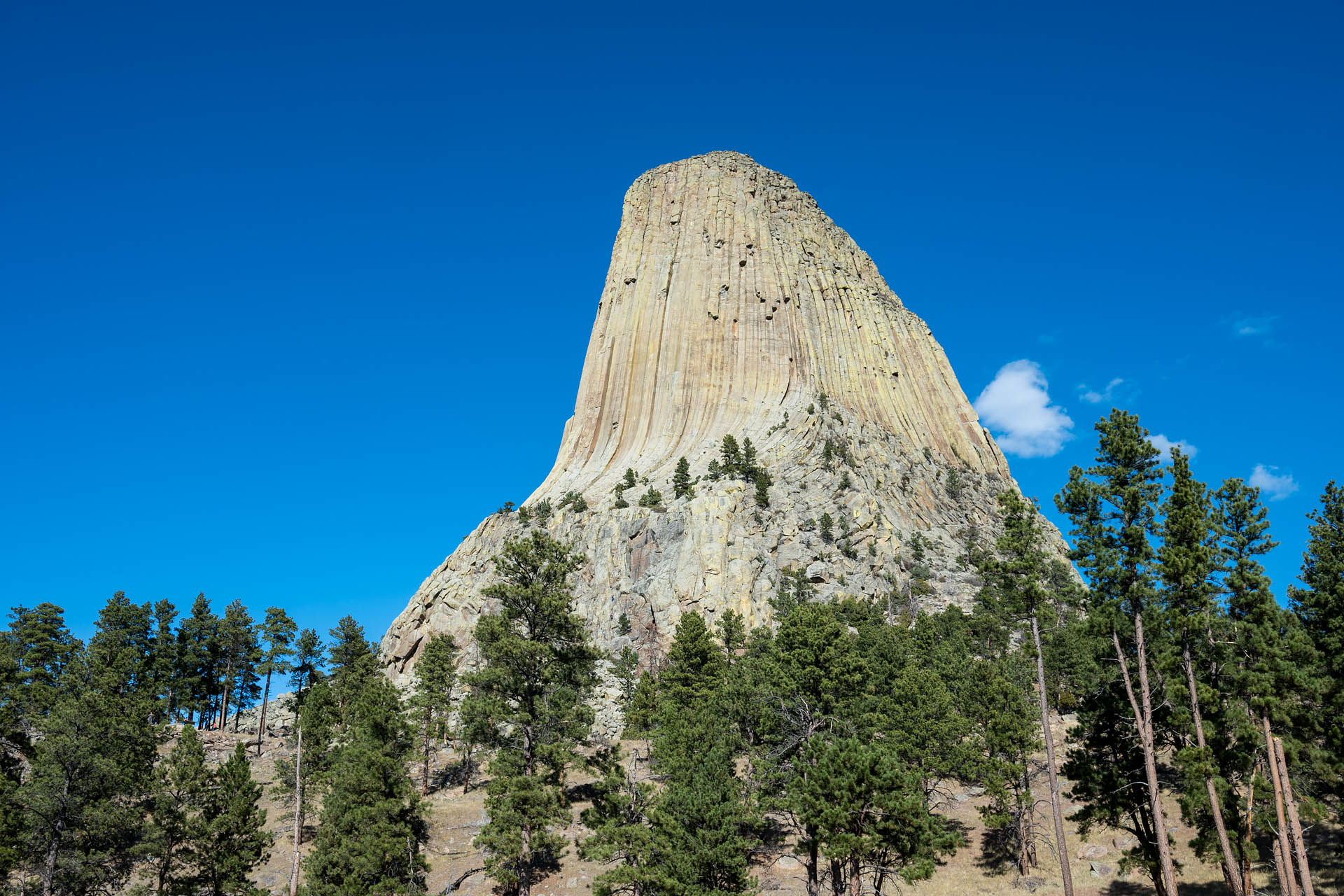 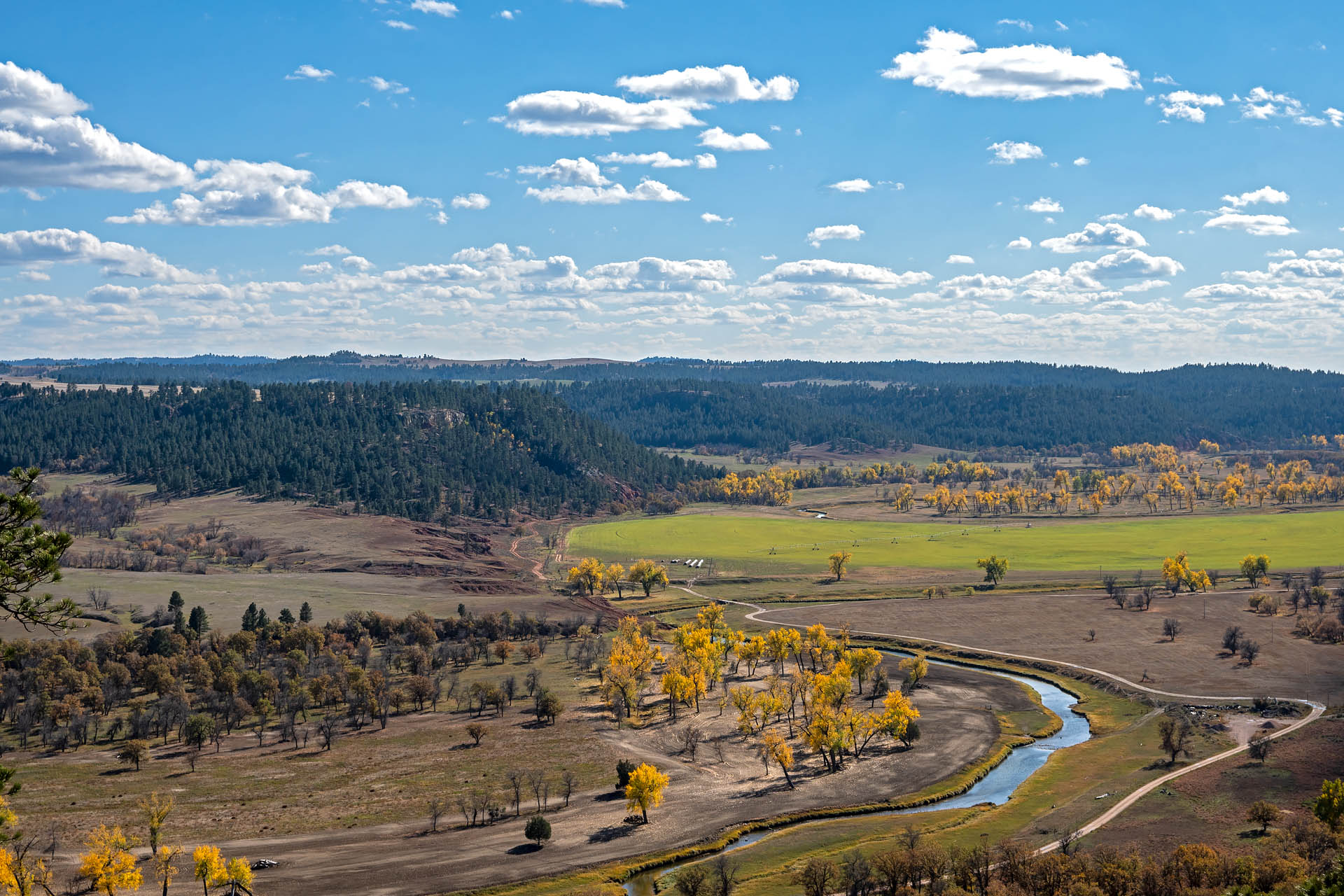 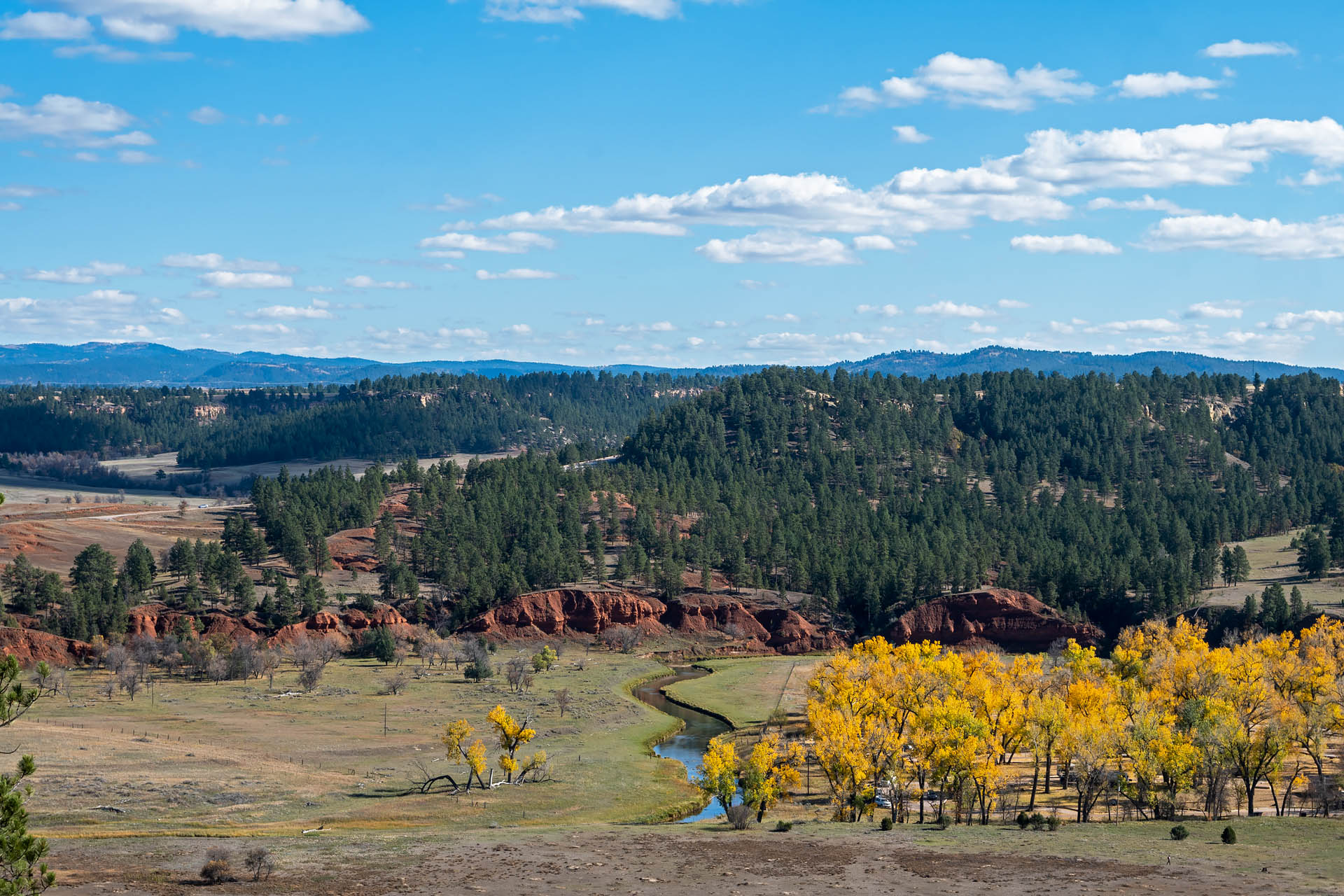 In addition to Tower views and a bit more isolation, this trail offers a look at some of the unique neighboring geology. While Devils Tower is largely surrounded by sparse forests of Ponderosa pine that give way to open prairie, layers of striking sedimentary rock sit just east of the monument. The vivid red strata are part of the Spearfish Formation, the oldest visible rocks in the park. The iron-rich sediments were deposited by a vast, inland sea that covered the area during the Triassic Period, roughly 195 to 225 million years ago. The aptly-named Red Beds seem almost as misplaced on the prairie as Devils Tower, and are more reminiscent of something you’d see in the deserts of southern Utah. 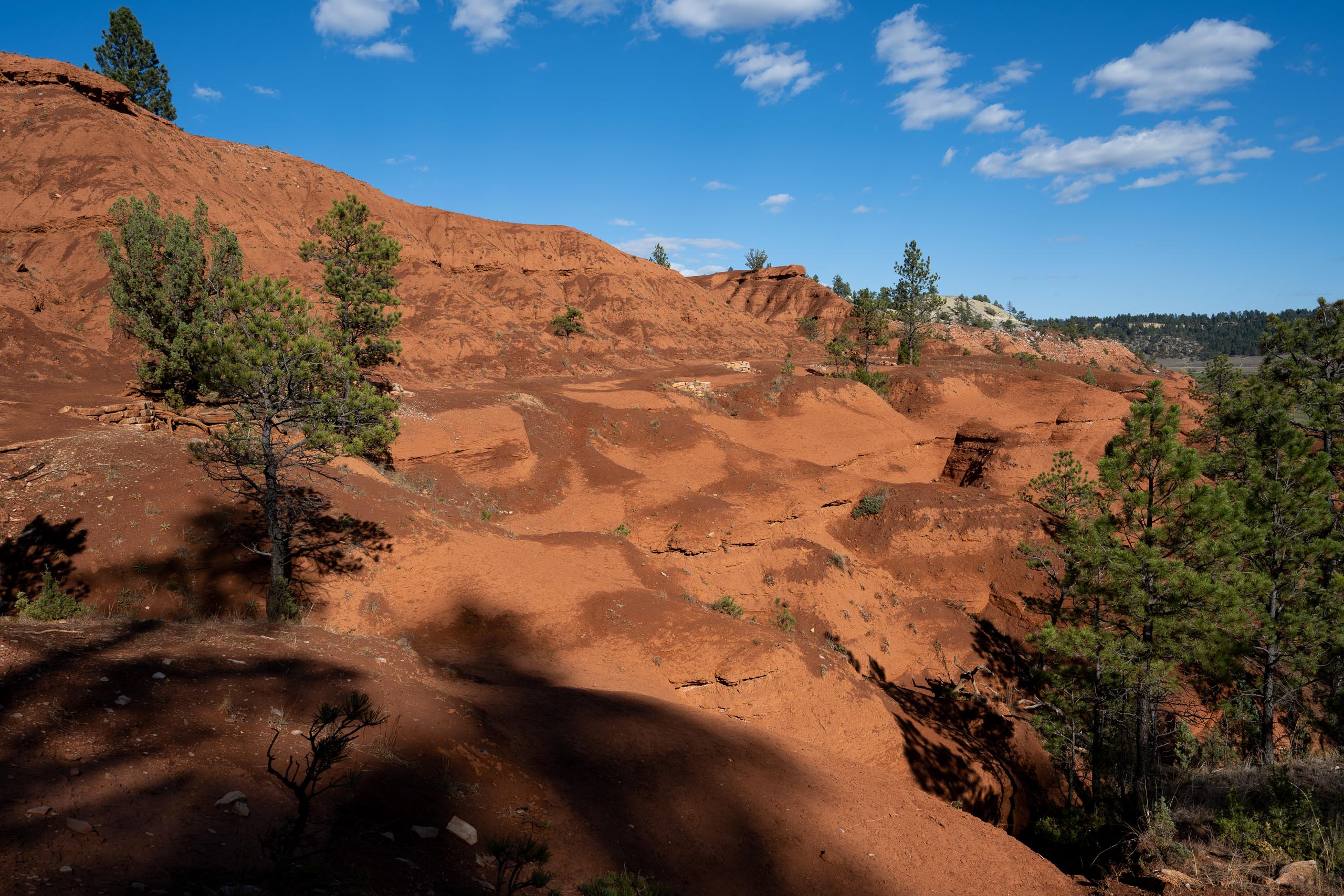 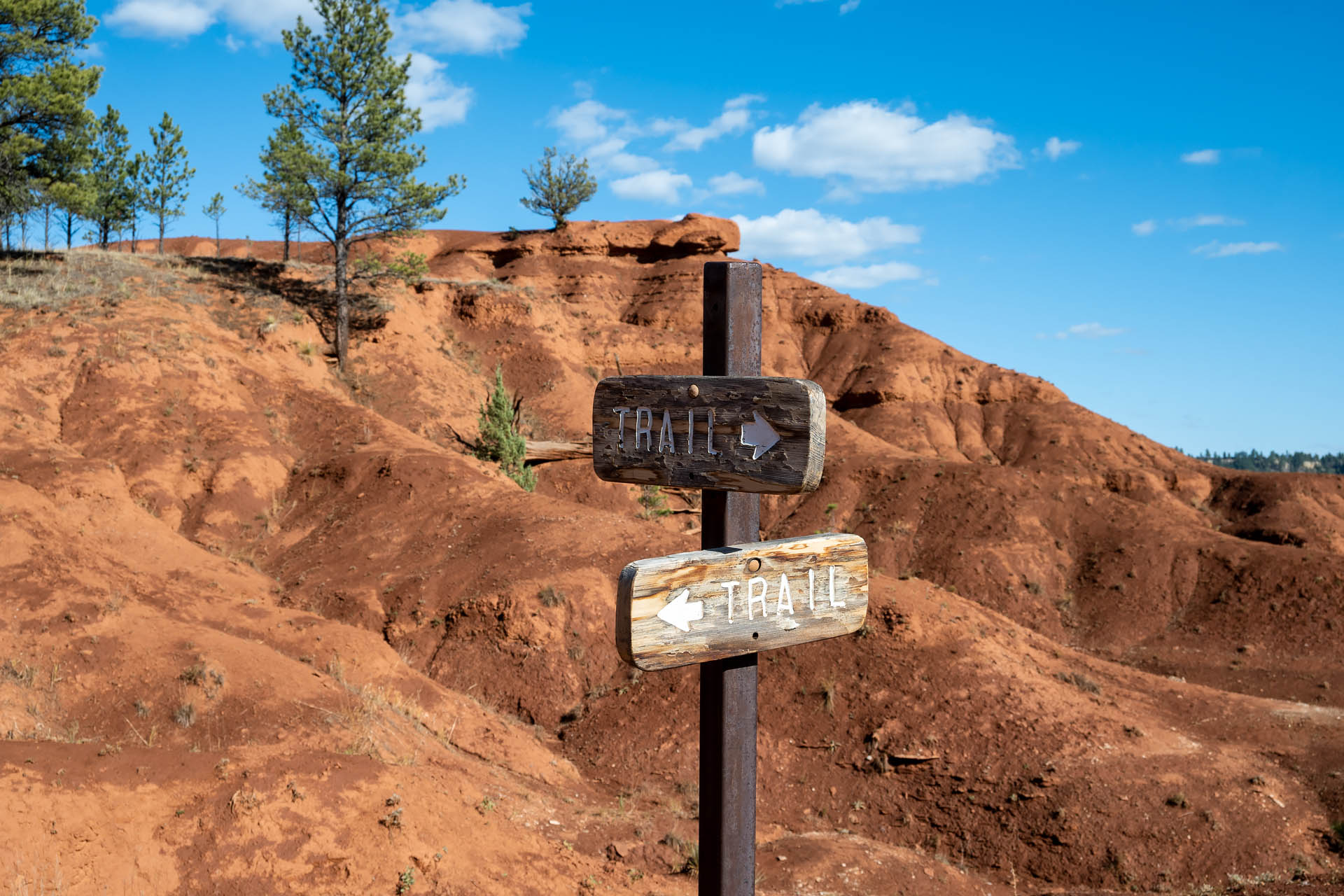 Just north of Devils Tower, the Joyner Ridge Trail is a 1.6-mile loop that joins the Red Beds Trail via a 0.6-mile connector. Consequently, if you want to add this to the Red Beds loop, it’ll add another 2.8 miles total to the trip.

Surprisingly, this ended up being our favorite route at the monument. Not only were we the only ones on the entire length of trail, but there were some seriously gorgeous views looking south towards the Tower. It was only a couple hundred feet of elevation gain up to the ridge, but it was just enough to get above the trees to see the soaring spire and base in its entirety. I think when you step back a bit and see the monolith dwarfing the surrounding Ponderosa pine forests, you really get a sense of how massive and seemingly out of place it is out there on the prairie. 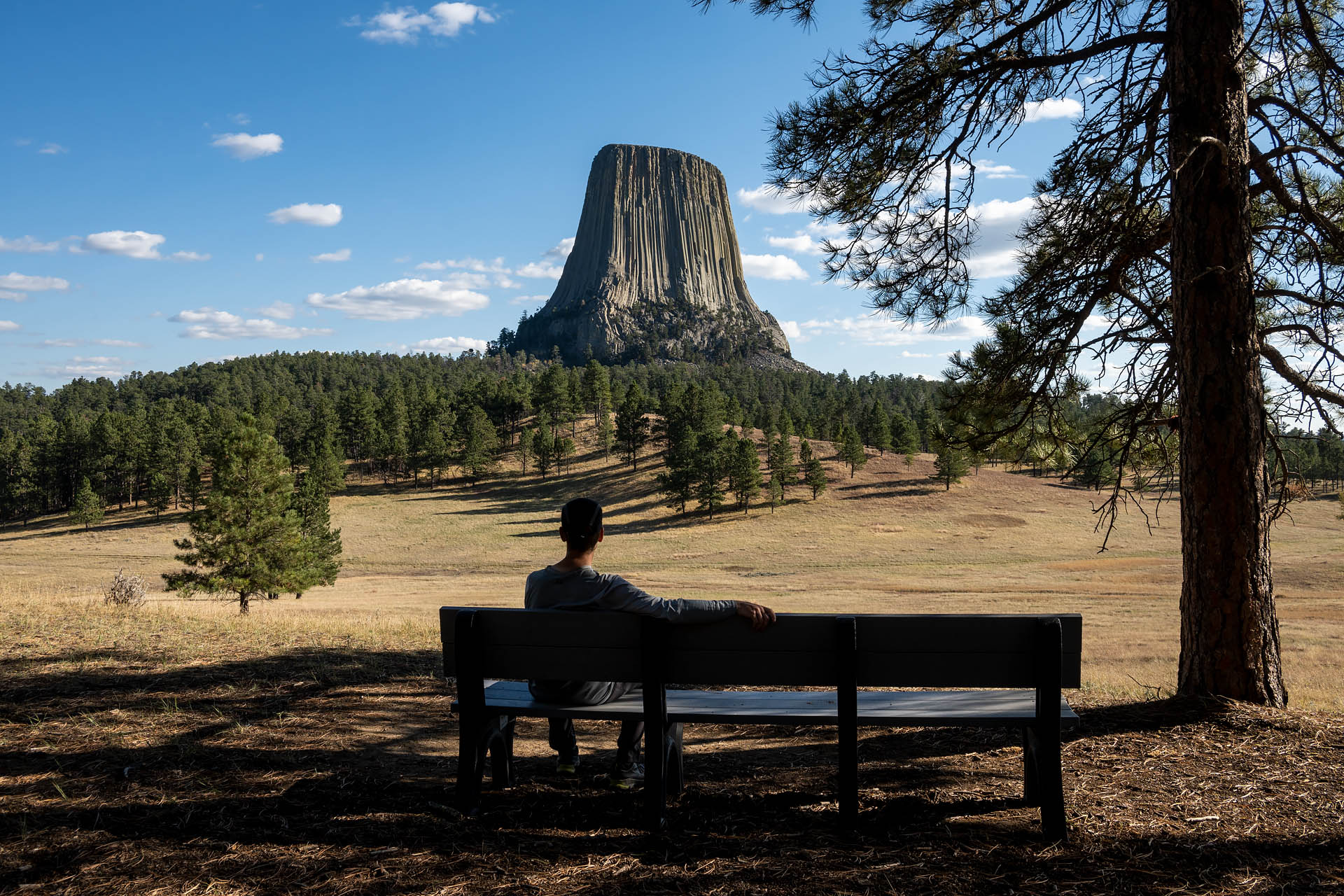 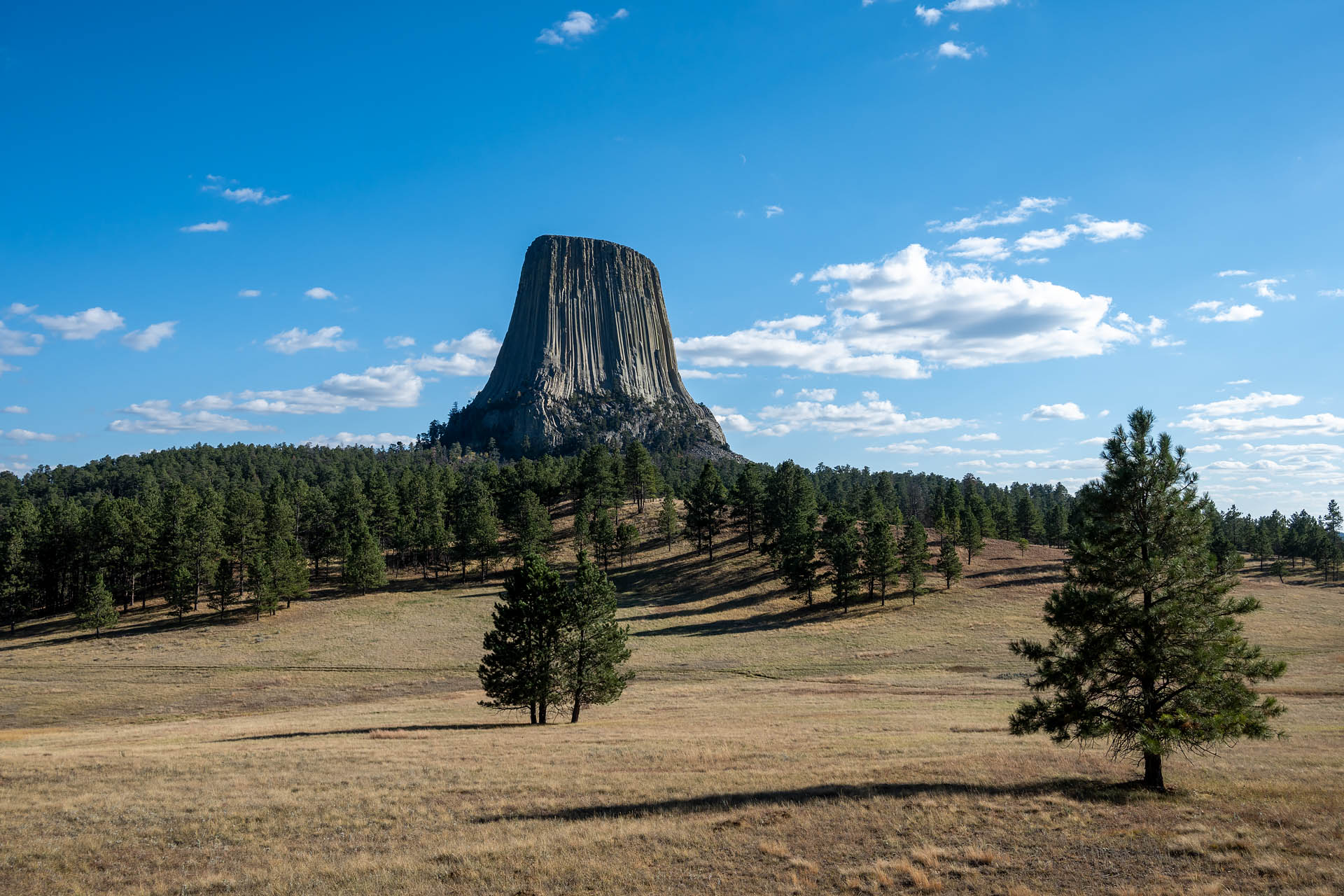 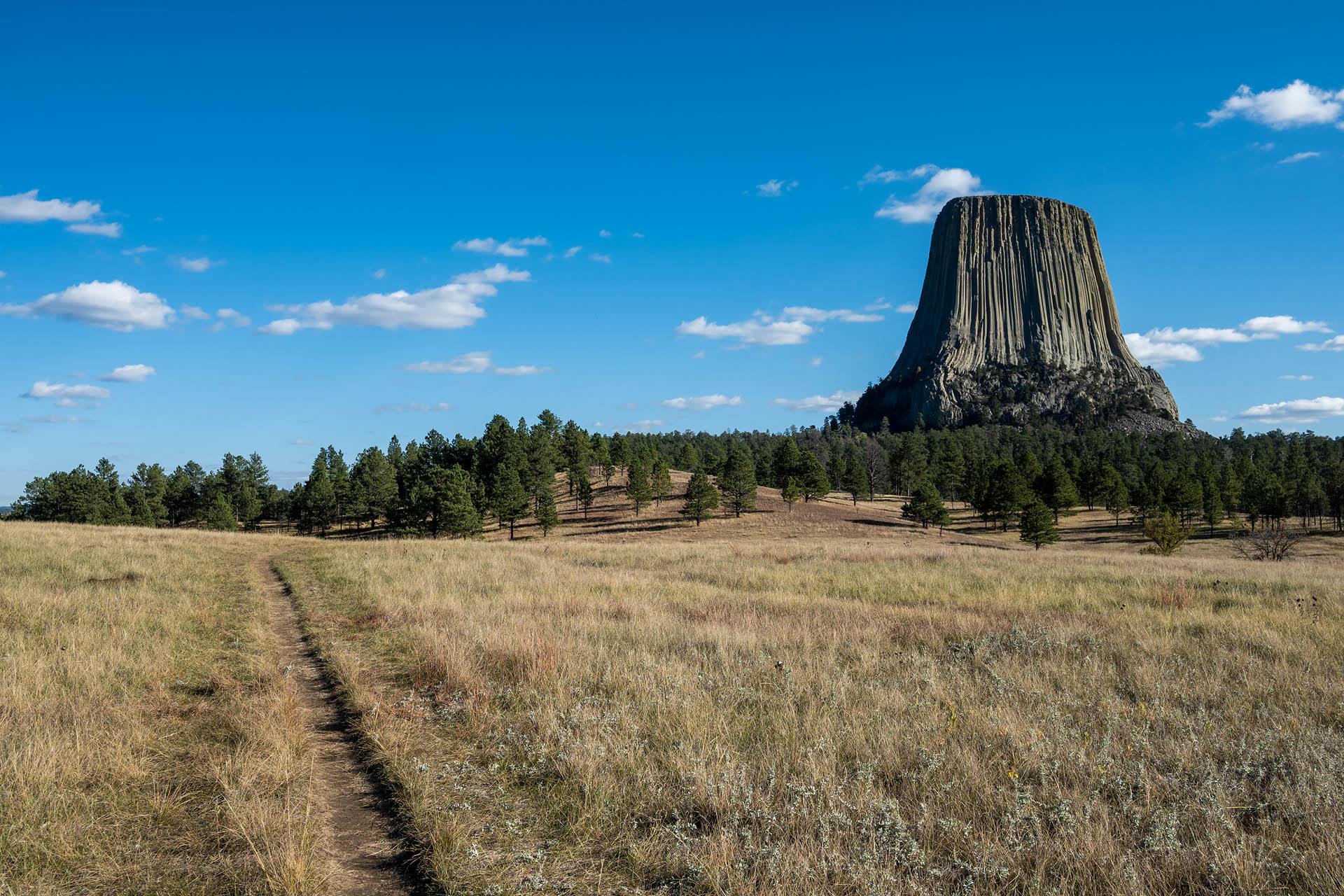 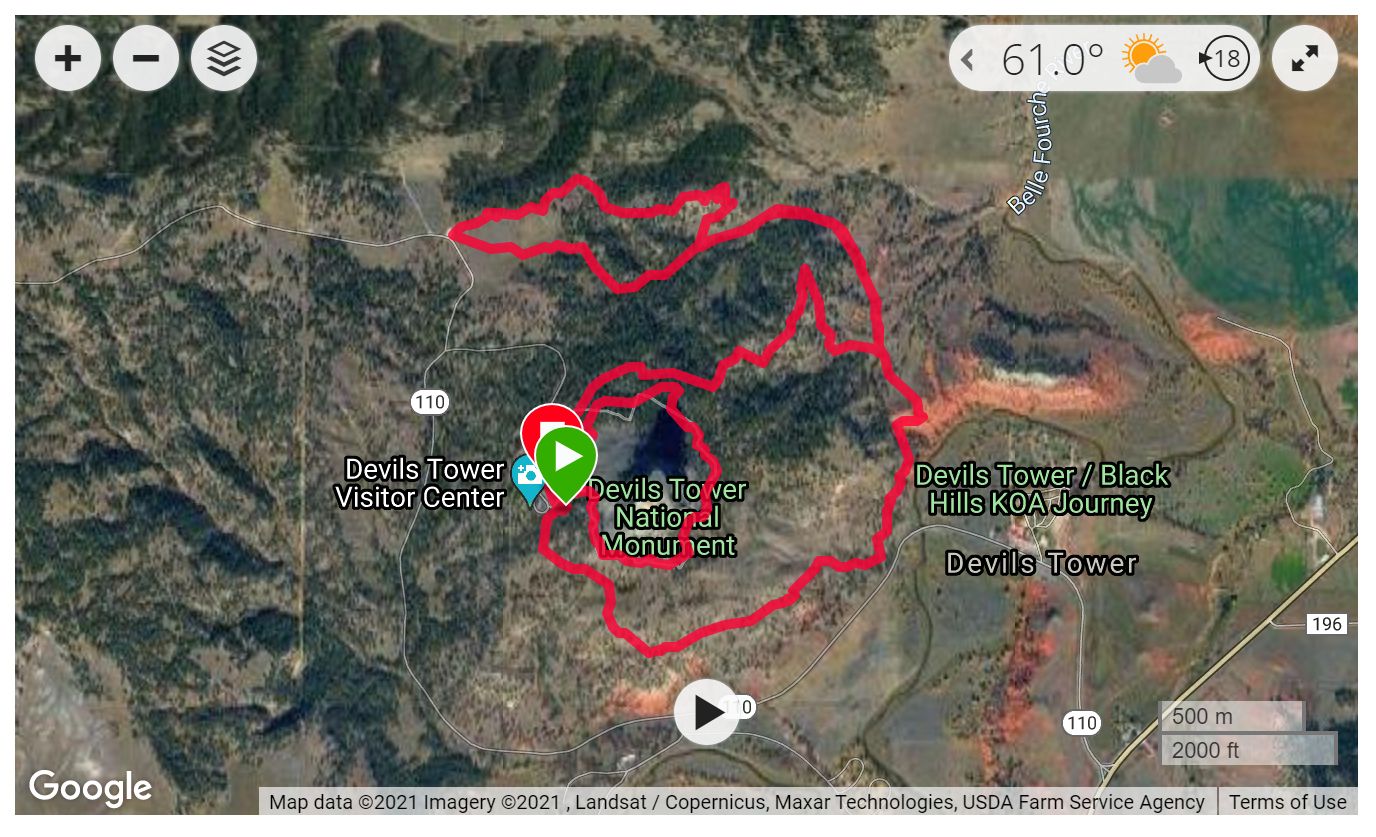 Although we didn’t end up hiking the two remaining trails, the South Side and Valley View Trails join the Red Beds Trail to the southeast of Devils Tower. Rather than circuiting the monolith, this 1.2-mile loop drops down into the Belle Fourche River Valley. In addition to some views of the Tower from the valley, the trail skirts the banks of the river and also passes through a prairie dog town. 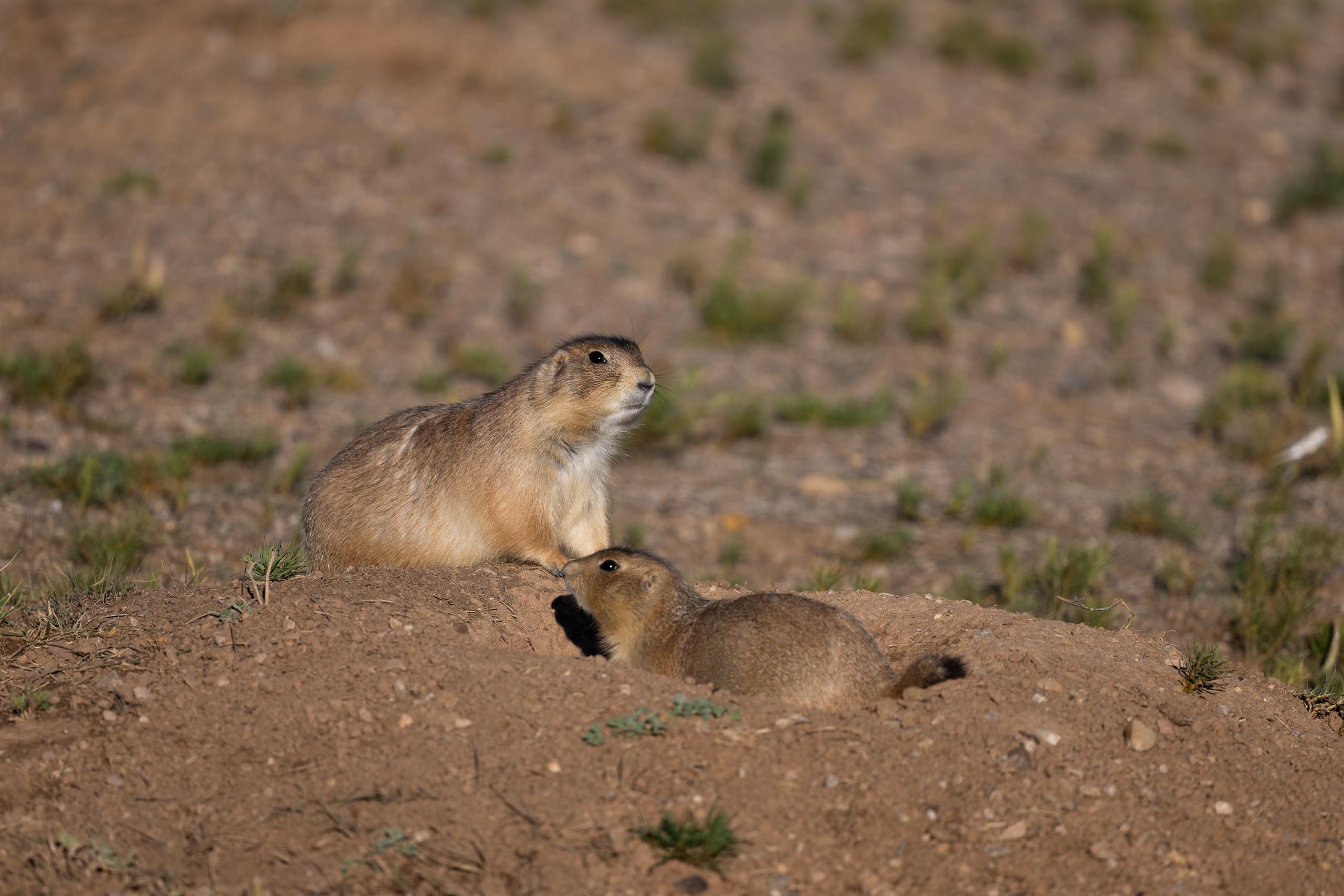 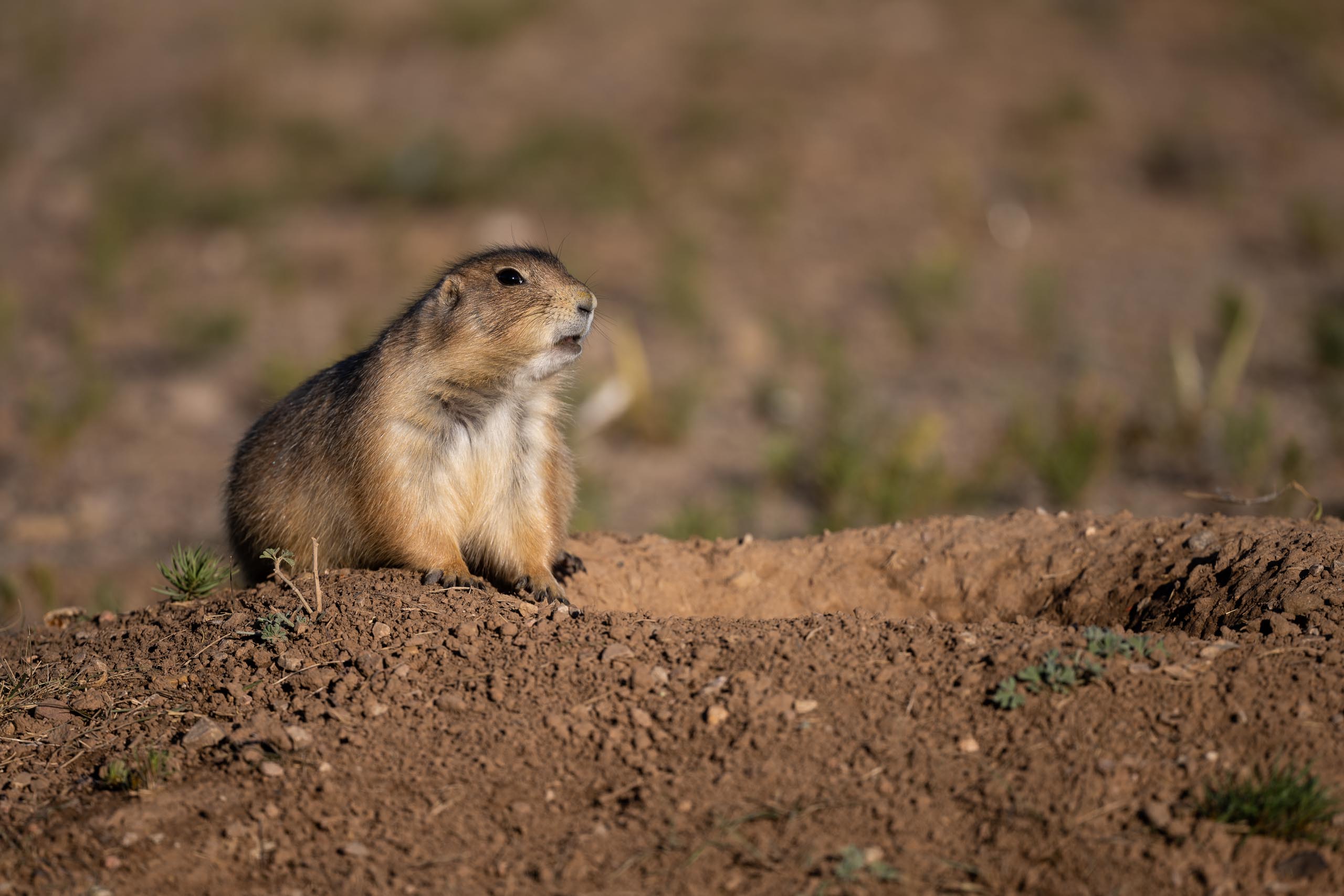 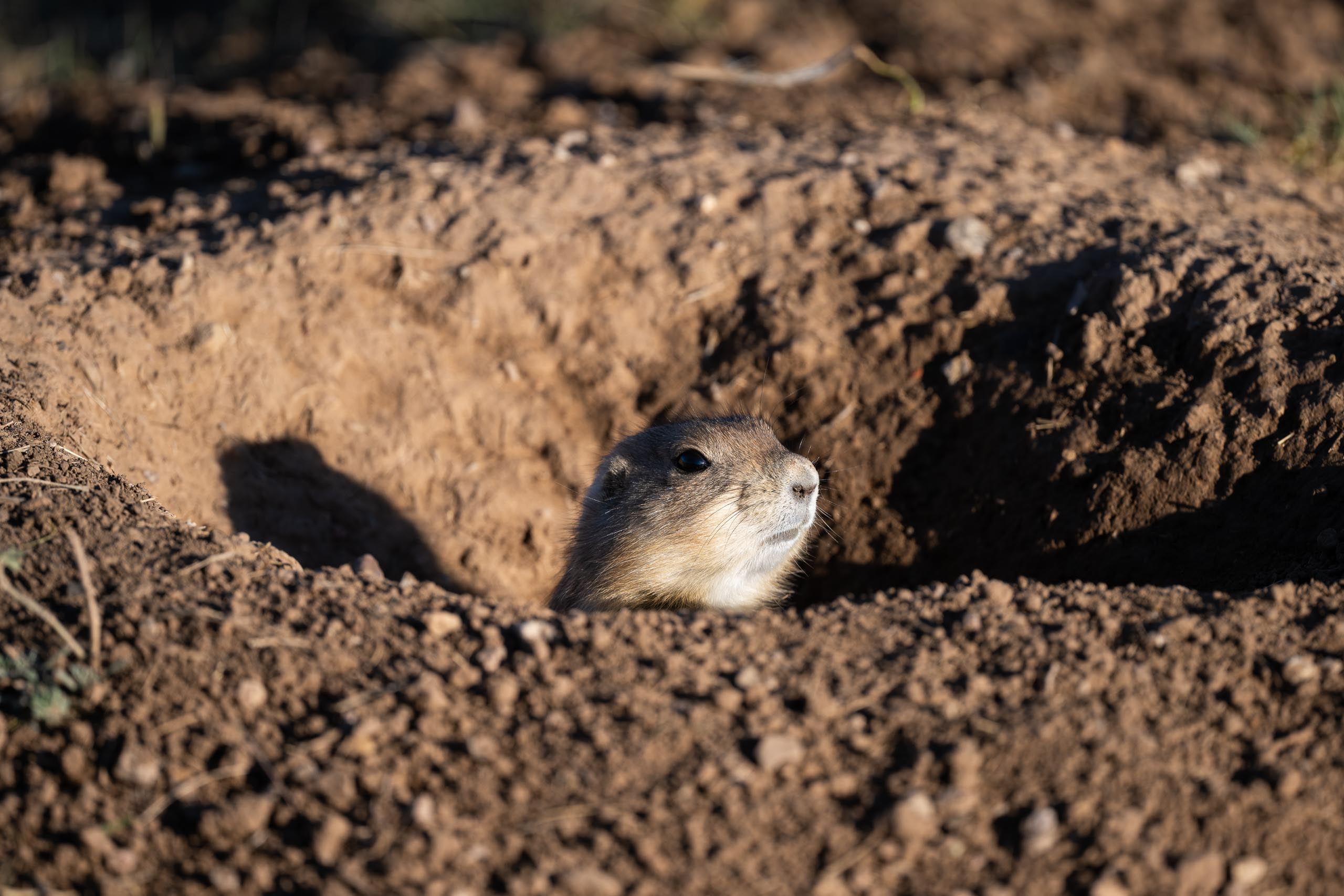 As you wander around the trails, you’ll notice colorful pieces of fabric hanging from trees. The cloths are hung by local tribe members as memorials and prayer offerings. Devils Tower (Bear Lodge) is still very much a sacred place to Indigenous Americans, so be respectful and don’t touch or move the flags. Additionally, the summer months hold particular significance to local tribes. During the weeks surrounding the solstice, the Plains Indians tribes hold spiritual ceremonies around the monument. Such rites include the Lakota Sun Dance, and are some of the most sacred and time-honored tribal rituals. To show consideration for the traditions of the indigenous communities, the Tower even closes unofficially for climbing during the month of June. 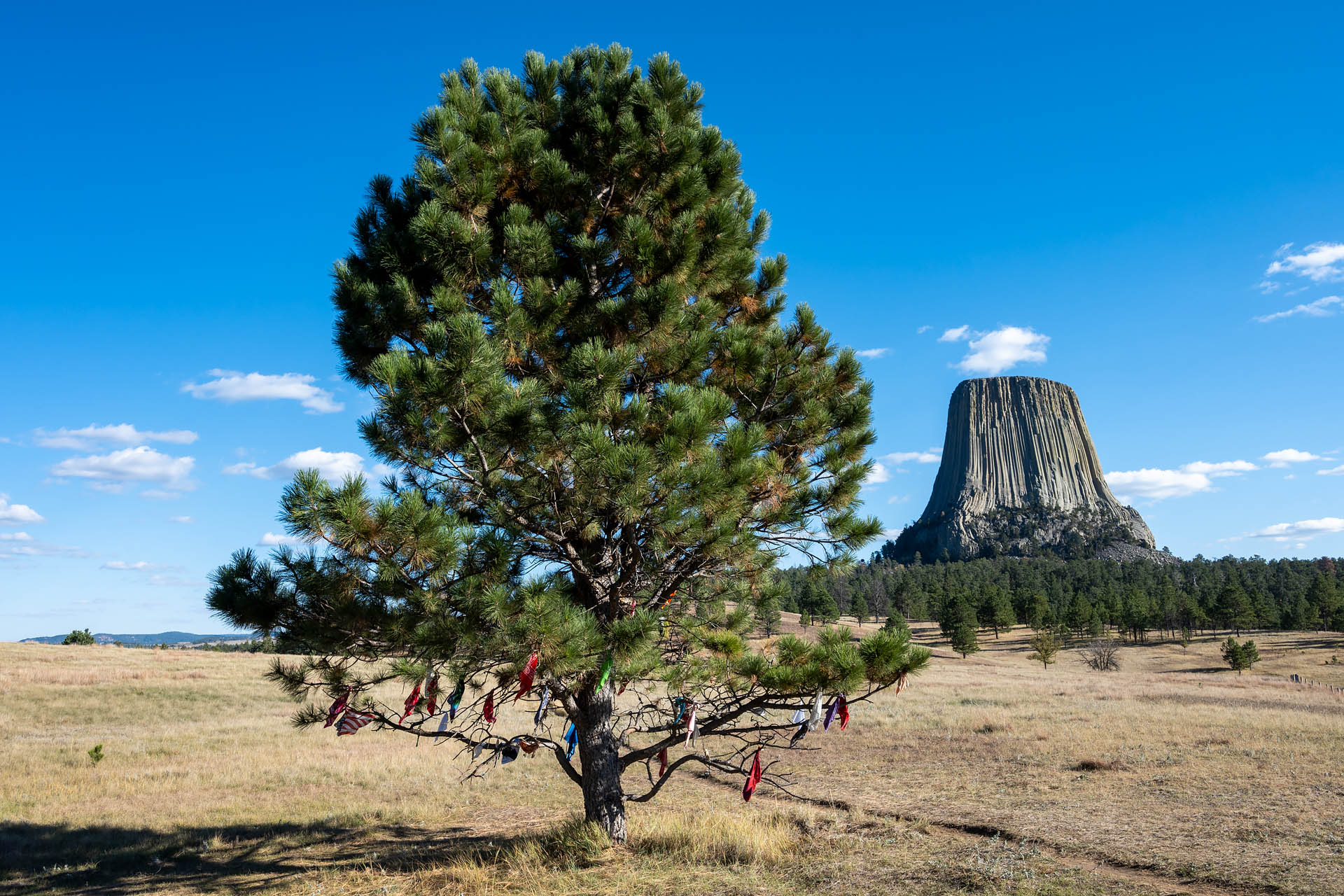