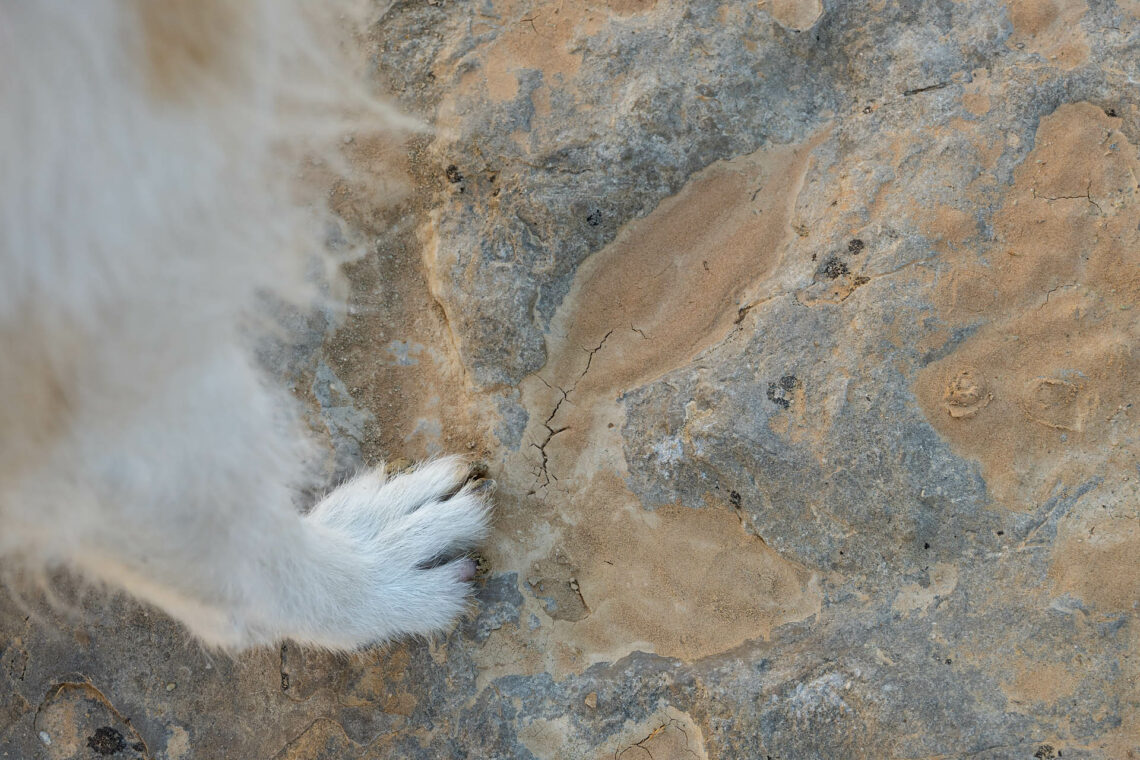 Sitting in the Bighorn Basin at an elevation of 4,200 feet is the tiny town of Shell, Wyoming – population 83. When you think of the Mountain West, ocean life is probably not the first thing that comes to mind. However, Shell was in fact named for its abundance of marine fossils. During the Jurassic Period, this part of Wyoming was a completely different landscape – a remote world where dinosaurs foraged along the shores of a vast, primordial sea.

One hundred fifty million years later, it’s hard to imagine this semi-arid landscape was once home to a thriving coastal community. Today, the Bighorn Basin is a desolate expanse of high desert, peppered with canyons and badlands. Stretching more than 8,000 square miles across northern Wyoming, the depression is surrounded by six mountain ranges – including the Bighorns to the east and Absarokas to the west. The Bighorn Basin is unique in that it contains layers of rock from nearly every geologic period dating back to the Precambrian Era (2.5 billion years ago). Moreover, the area is rich in fossils, from plants and marine life to dinosaurs and mammals.

About ten miles south of Shell sits the Red Gulch Dinosaur Tracksite – a forty-acre parcel of land protected by the BLM. Discovered in 1997, the Jurassic-era dinosaur footprints were an unexpected find by a local hiker. While the prints alone were a noteworthy discovery, they also transformed experts’ understanding of area’s geological history. Until then, it was believed that the entire region was underwater 150 million years ago. No one imagined a terrestrial tidal plain where dinosaurs roamed.

Being the huge science and nature geeks we are, we knew we had to make the two-hour drive from Sheridan to check out the site. 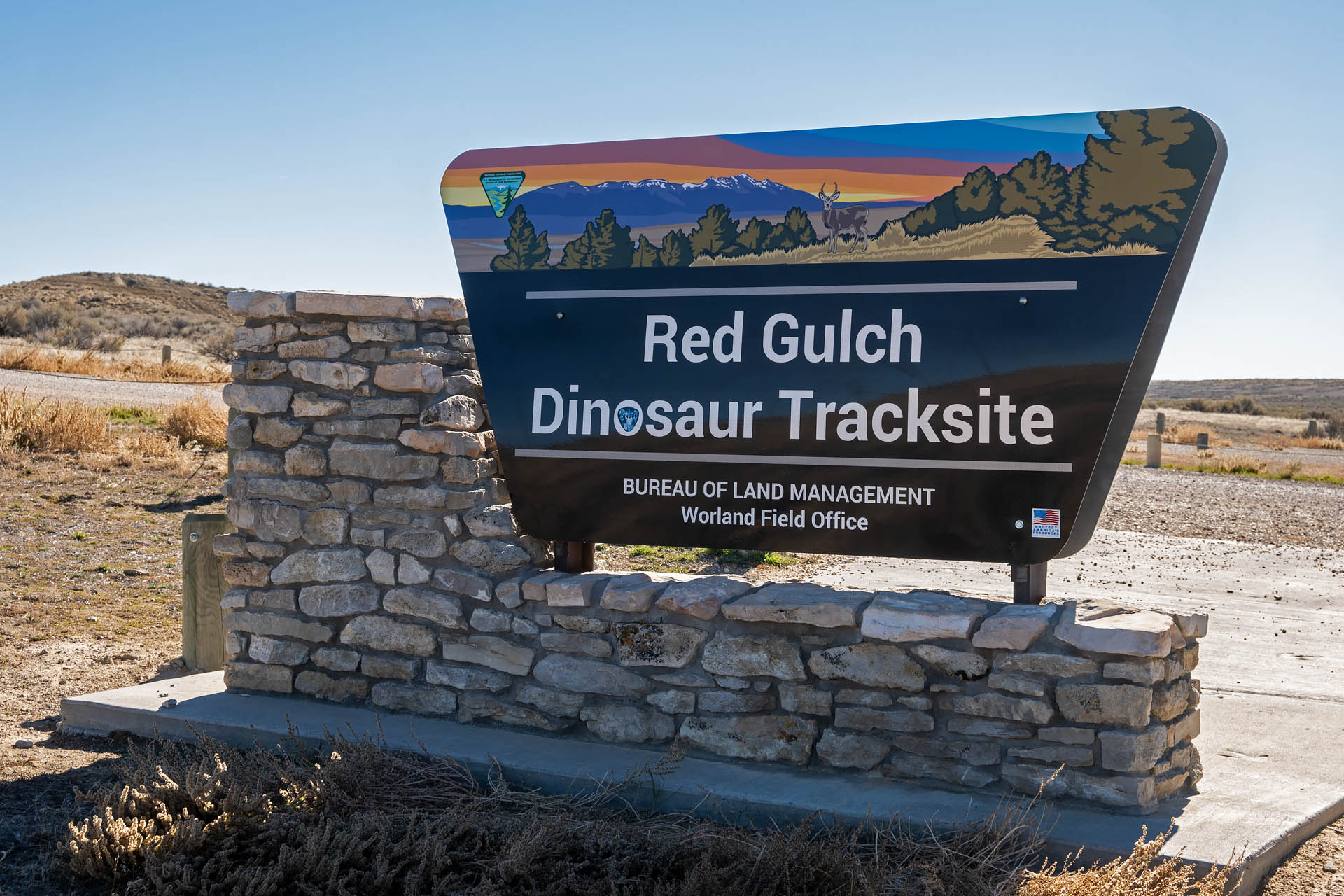 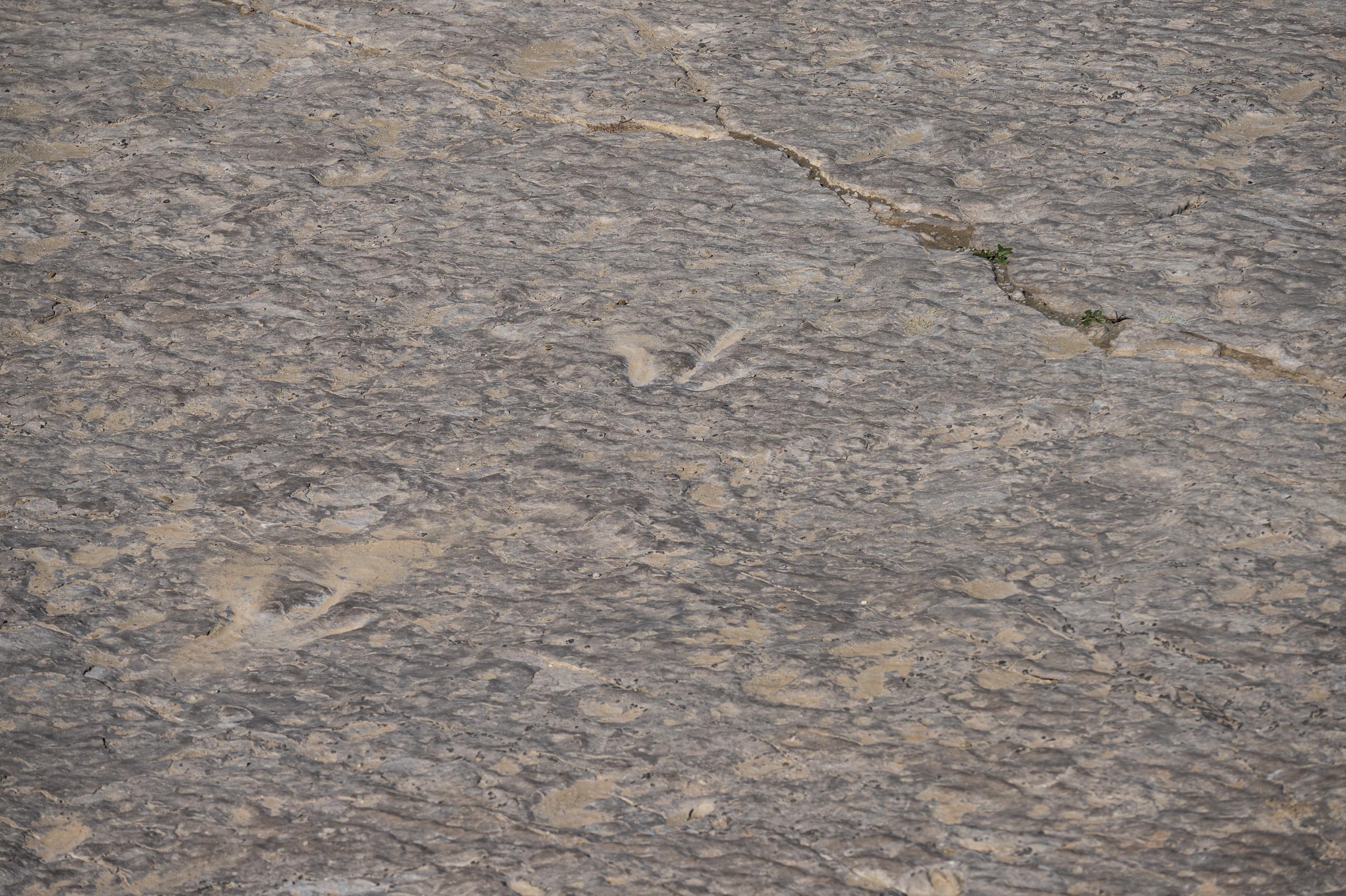 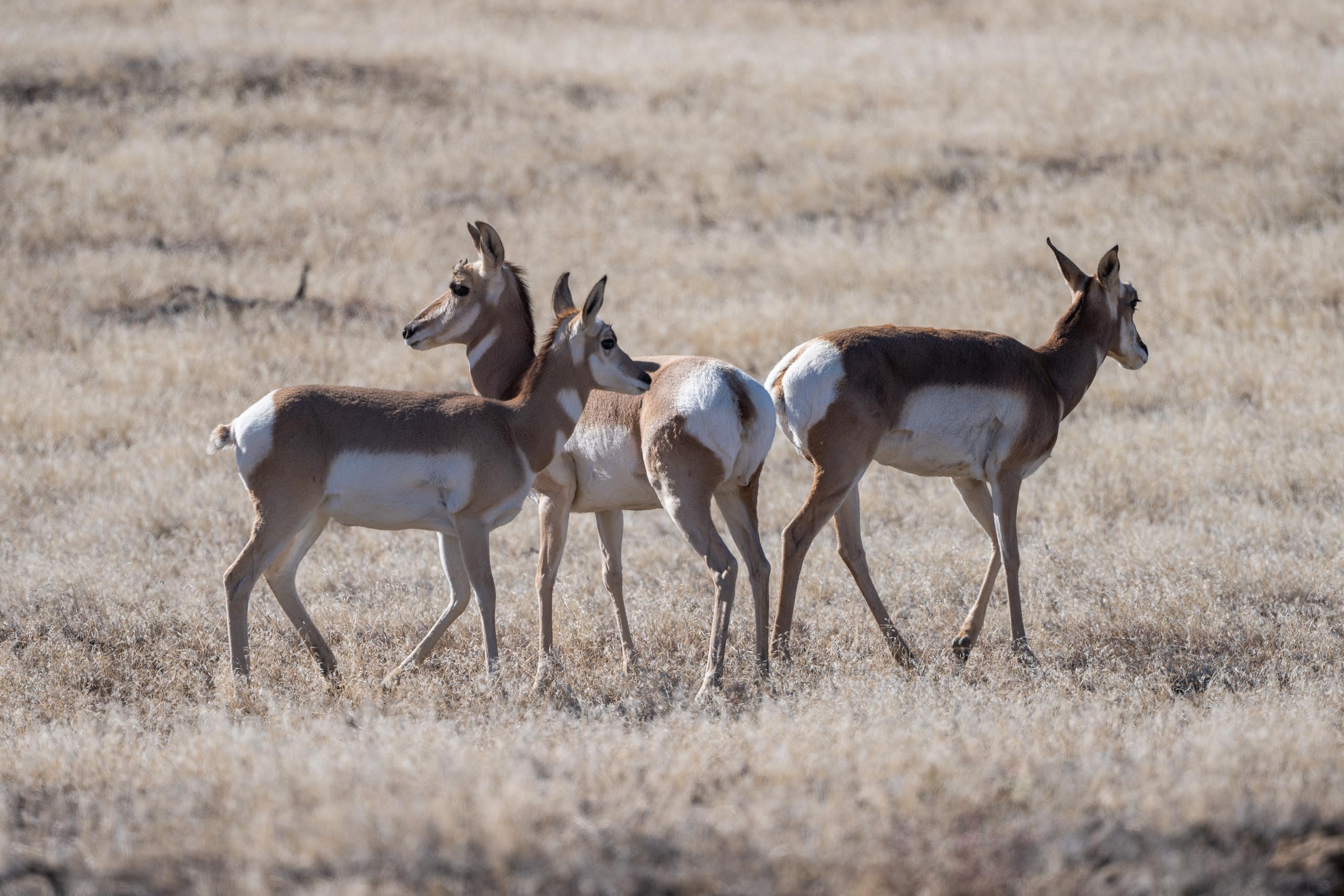 In the footsteps of giants

While the tracksite itself is barren and remote, the surrounding landscape is surprisingly striking. The five-mile drive along Red Gulch Road to the site is part of the 32-mile Red Gulch/Alkali National Backcountry Byway. Along the gravel road, colorful sedimentary layers are reminiscent of the Yellow Mounds in South Dakota’s Badlands. Here, however, the rainbow rocks are uniqely juxtaposed by the snowcapped peaks of the Bighorns.

The main attraction at Red Gulch is the ‘Ballroom,’ and two-thirds of the more than 1,000 individual prints can be found in this one small area. The footprints were left in muddy tidal flats along what used to be the Sundance Sea, an ancient arm of the Arctic Ocean. During the Middle to Late Jurassic Period, this shallow, inland waterway extended through a large swath of the nascent North American continent. Interestingly, the tracks were preserved with the help of marine organisms in the soil, including algae and lime from calcium-rich shells. Some of the individual prints can be hard to discern, but a few have some incredibly well-preserved definition. 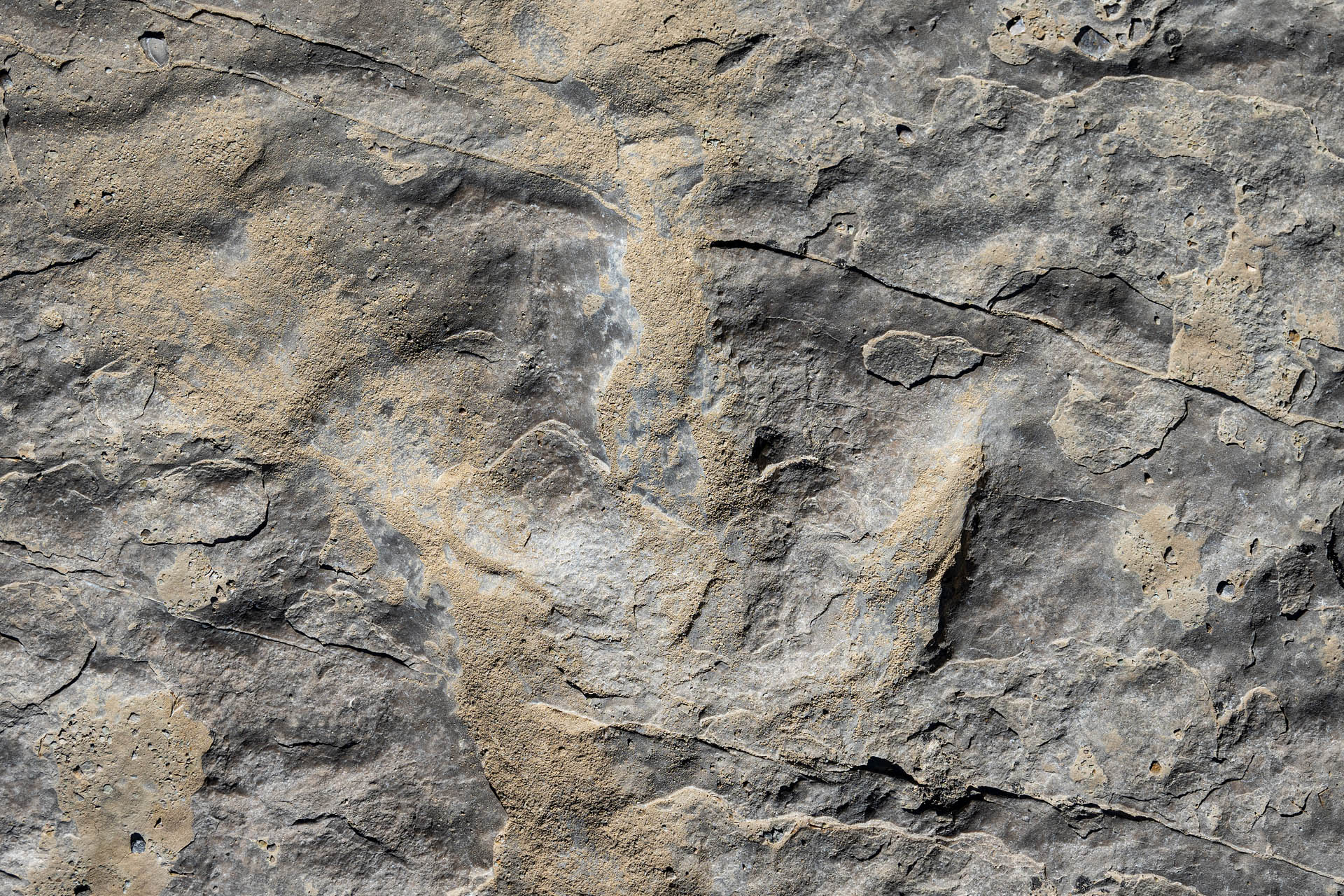 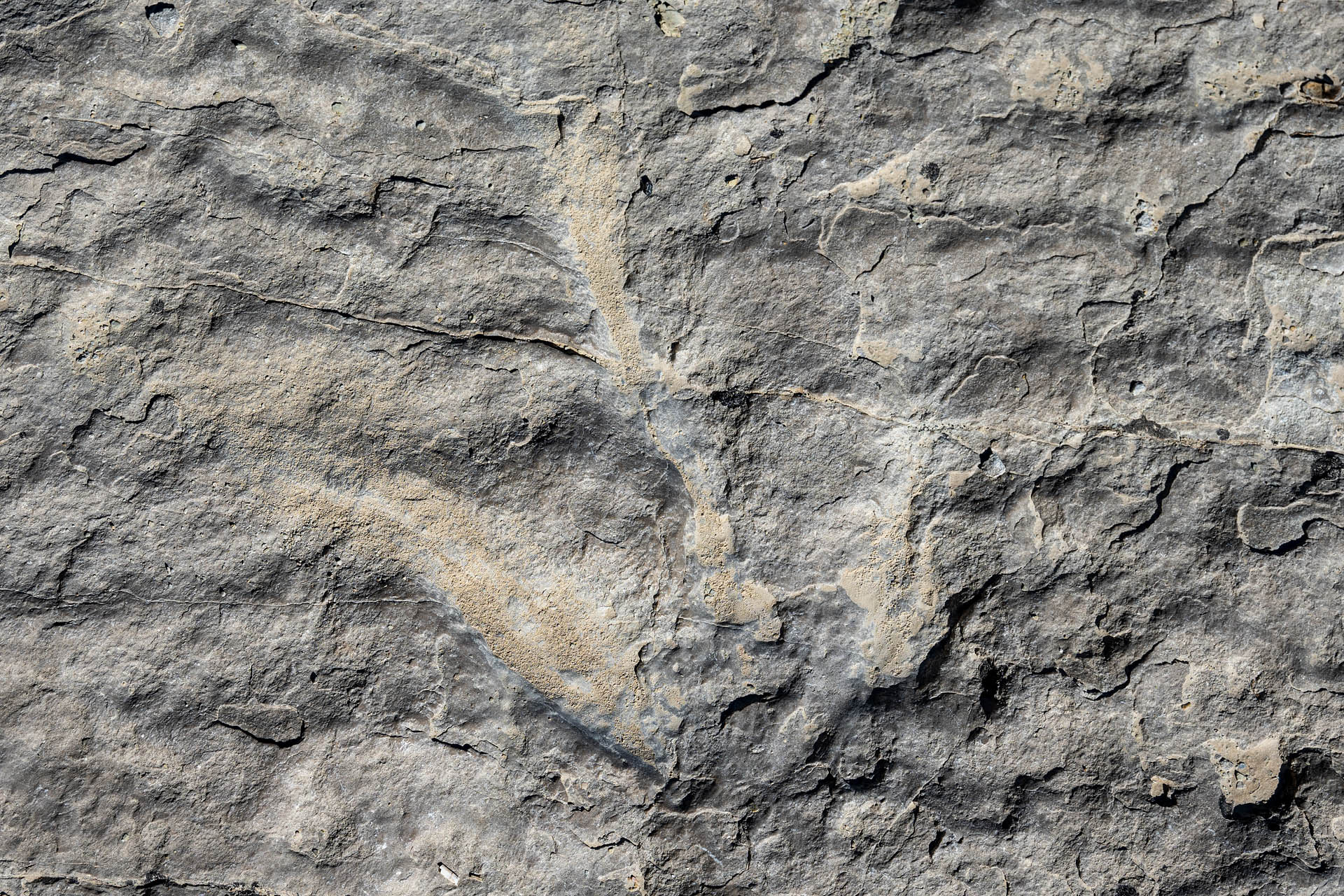 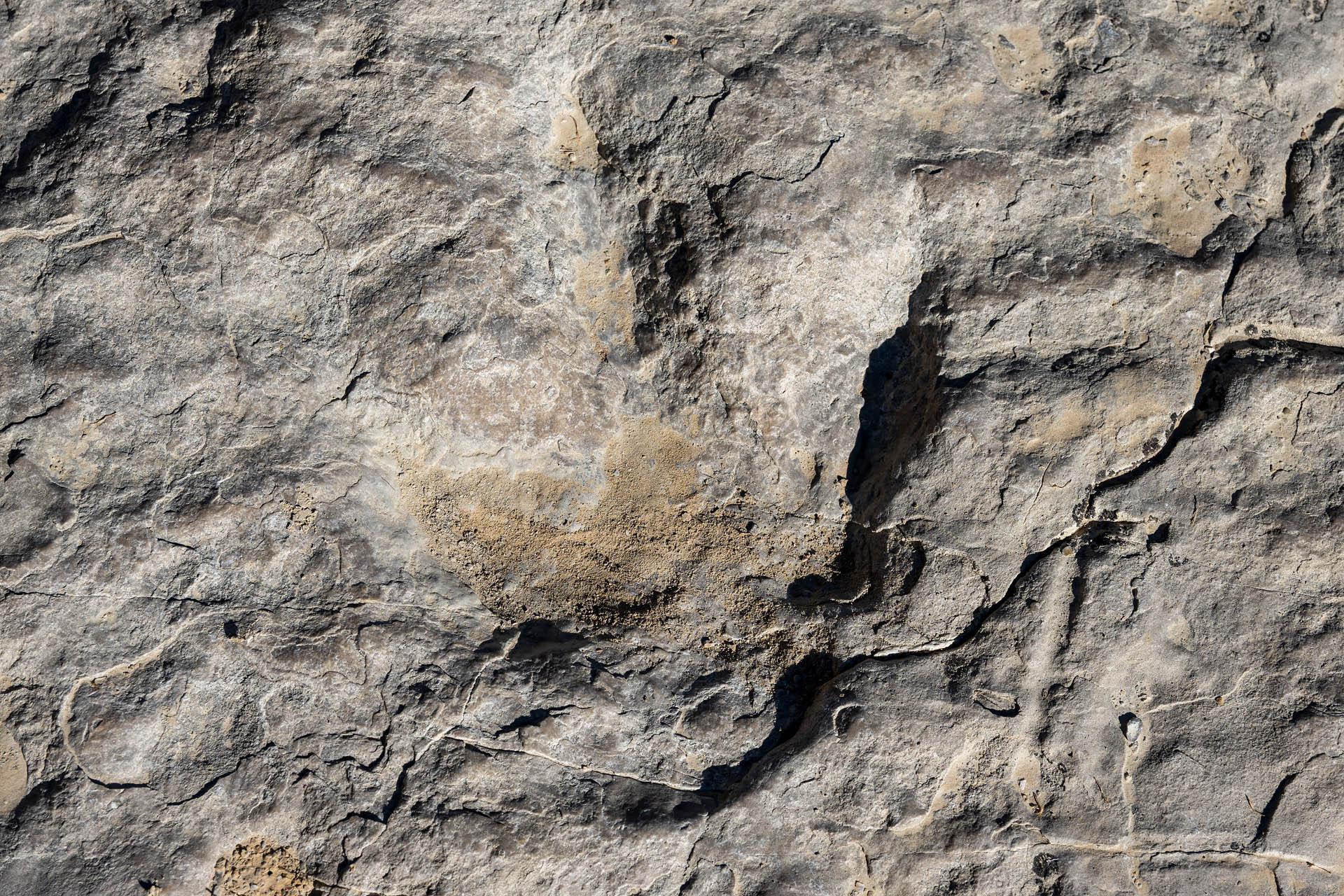 Red Gulch’s tracks date to 167 million years ago – the height of the Middle Jurassic. While the exact species of dinosaur isn’t known due to a lack of supporting fossil evidence, the prints most likely belonged to a type of carnivorous theropod – three-toed reptiles that walked upright on their hind legs.

While the dinosaurs have not yet been identified at the species level, paleontologists have been able to make some interesting predictions about those who left the footprints. Each print is between 3 and 11 inches long (8 to 28 cm), and researchers have discovered 125 distinct pathways. Based on their measurements, scientists believe the dinosaurs had a small to medium stature – somewhere between 20 and 500 pounds (10 to 230 kg). The community was likely made of up both juveniles and adults, with the reptiles traveling in family groups. Taking body size and stride length into account, scientists were able to further estimate that the theropods were walking, not running, at speeds of between 2.2 and 6.5 mph (3.6 to 10.8 kph).

While the tracks themselves were super cool, we may have actually had more fun hunting for fossils. The sediments around the tracksite are absolutely teeming with the remnants of marine invertebrates. We were stunned at how many shells could be uncovered by just running our hands along the topsoil… instant proof that nearby Shell was worthy of its moniker.

Scattered around the cement-like soil were dozens of trace fossils, including the vestiges of vertical burrows formed by shrimp, clams and other mollusks that inhabited the seabed. Even more interesting, though, were the countless Gryphaea we found in the loose dirt along the surrounding hills. Commonly known as ‘devil’s toenails,’ the shells belong to an extinct genus of oyster. The bivalves thrived in large colonies between the Triassic and Jurassic Periods (250 to 145 million years ago). 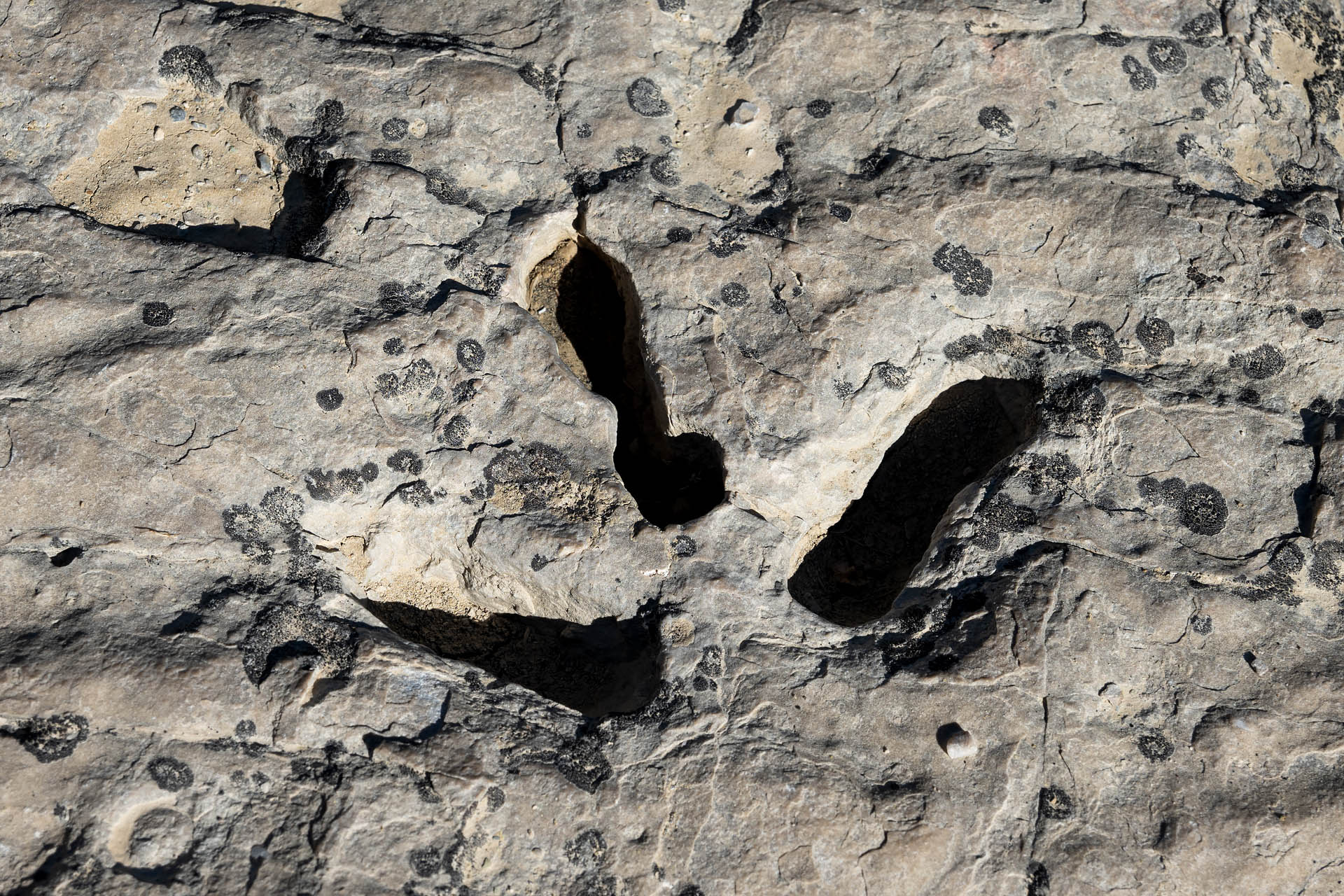 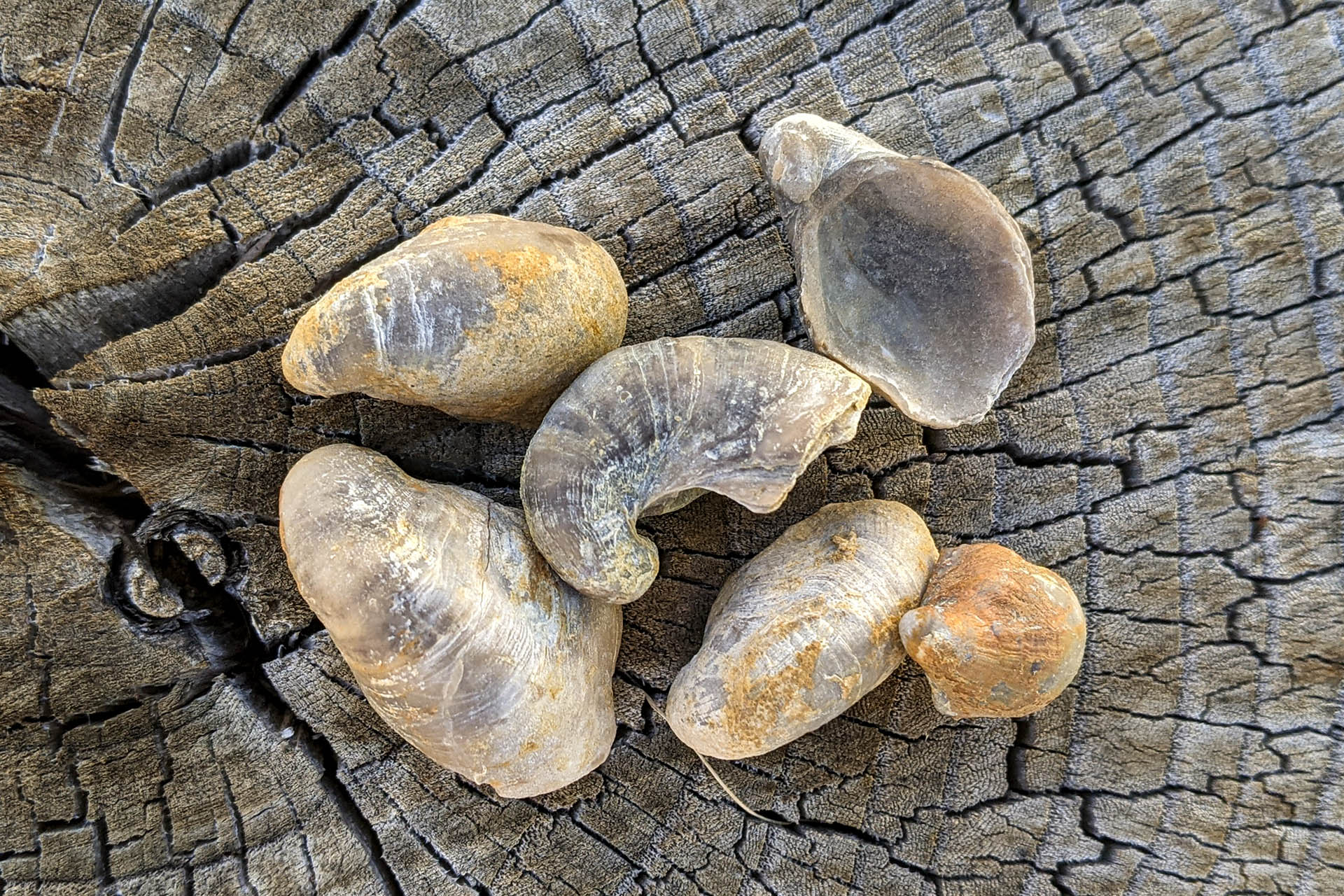 The most exciting find of the day, though, was when Stephan scooped up a glistening, bullet-shaped relic. It was just over an inch long and cracked along its central axis, giving way to a translucent, crystalline interior. We were beyond curious at what it could possibly be. 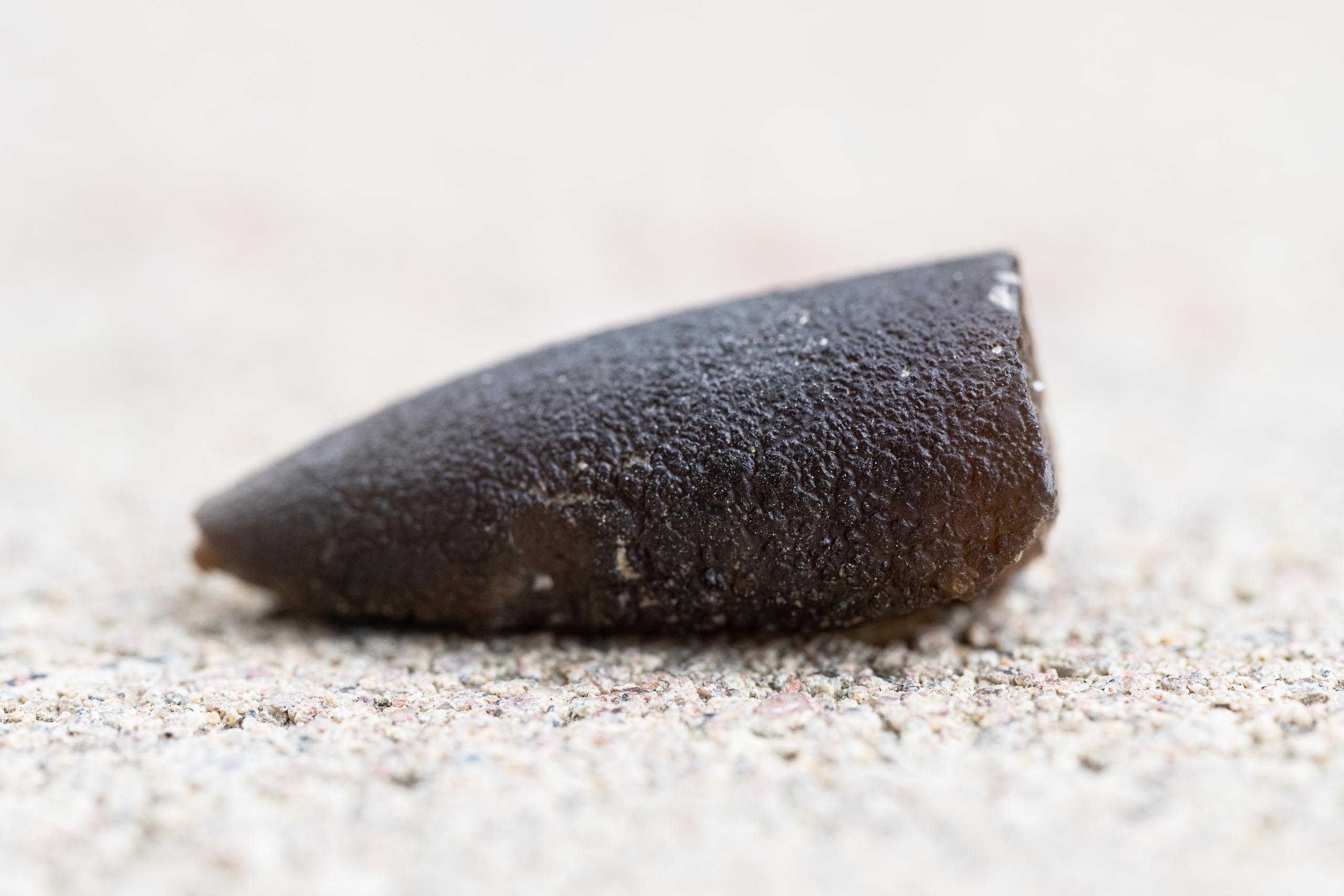 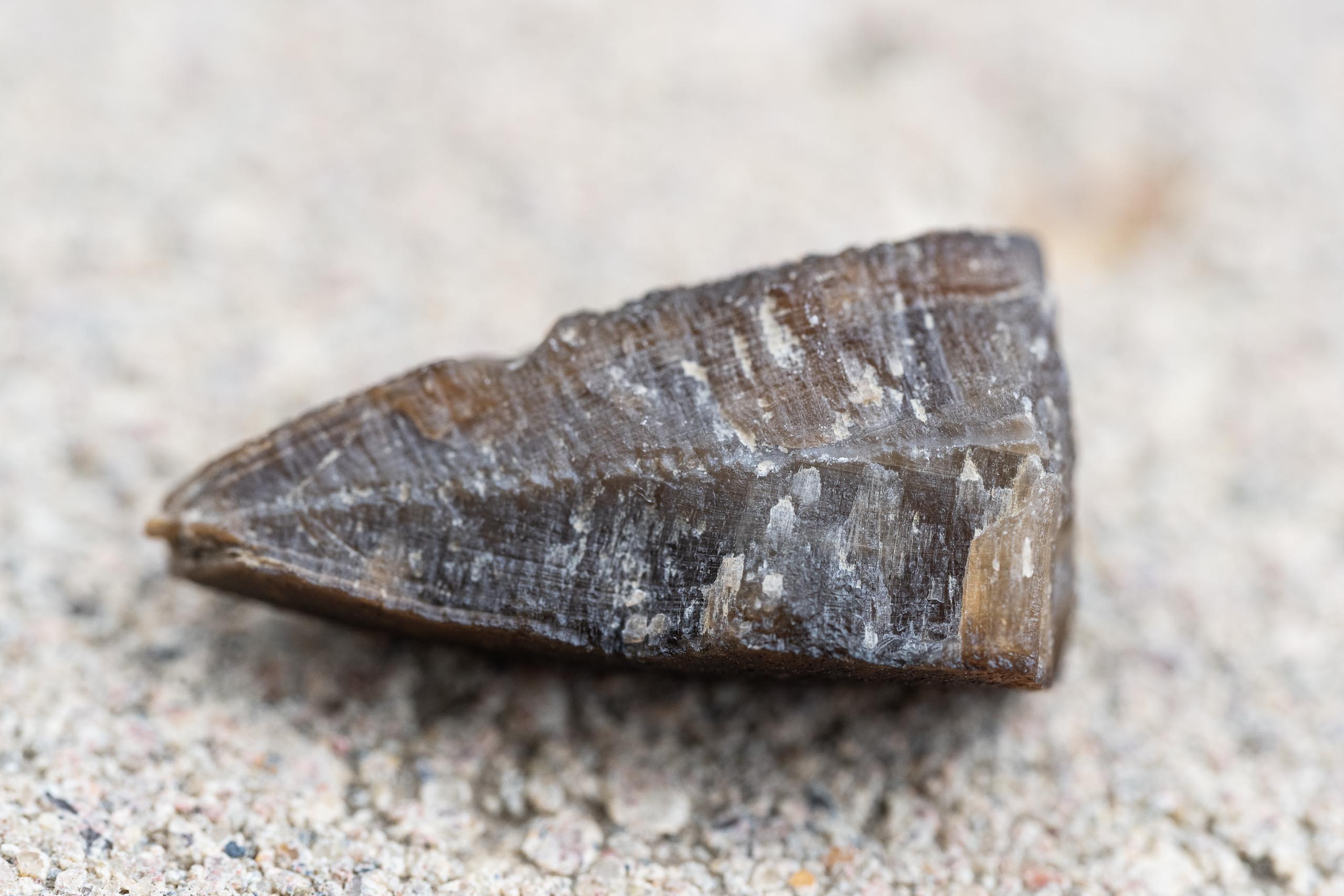 After a bit of research, we learned it was a belemnite, an extinct order of squid-like cephalopod that lived during the Early Jurassic to Late Cretaceous (201 to 66 million years ago). Related to modern squid and cuttlefish, belemnites were particularly abundant and diverse during the Jurassic. The ancient ancestors were similar in size to today’s squid – about 12 to 20 inches long – and also had ten arms. Their internal structure, however, was quite different. Belemnites had an internal shell that was much more extensive than modern squid. The fossil Stephan uncovered was evidence of this difference.

Like the specimen he discovered, most belemnite fossils are the part of the squid called the rostrum (or ‘guard’). Located at the posterior end of the animal, the rostrum was about one-third the length of the squid. It likely counterbalanced the larger head and tentacles to aid the animal when swimming. The rostrum was made of calcite which is very stable and, consequently, the only part of the animal that’s typically fossilized. Additionally, the rostrum contains concentric growth rings like a tree trunk, which explained the crystalline structure that had initially captured our attention. Interestingly, belemnites were named for this bullet-shaped structure; belemnoid translates to ‘dart’ in Greek.

People have been stumbling across belemnite fossils for centuries. Across much of Medieval Europe, belemnites were known as ‘thunderstones’ or ‘thunder-arrows.’ Folklore from Lithuania to Greece to northern Europe described the stones as being shot down like arrows during storms. In Germany and the Netherlands, the stones were thought to protect homes from lightning strikes. Dating even earlier, objects resembling belemnites appeared in ancient Egyptian hieroglyphics, and appeared to be associated with both lightning and fertility. Alternately, in Scandinavian legends belemnites were thought to be candles from gnomes or pixies.

Many of these cultures also believed the stones had healing properties, curing ailments from rheumatism, snake bites, and sore eyes in humans to distemper in horses. Between these legends of old and our modern scientific understanding, we were pretty enamored with our little calcite treasure.

If you find yourself at Red Gulch and are interested in extending the day with a short hike, there are a couple of options just a half hour east of the tracksite at the edge of the Bighorn National Forest. The Shell Bench Trail (#184) parallels the southern side of Highway 14 (Bighorn Scenic Byway) for 10 miles, while the Beef Trail (#056) similarly skirts the northern side for 6.5 miles. Both trails are dog- and mountain bike-friendly, and offer views of Shell Canyon. We hiked the western third of the Shell Bench Trail, and enjoyed views overlooking the canyon as well as the soaring formations of Elephant Head Rock and Copman’s Tomb. 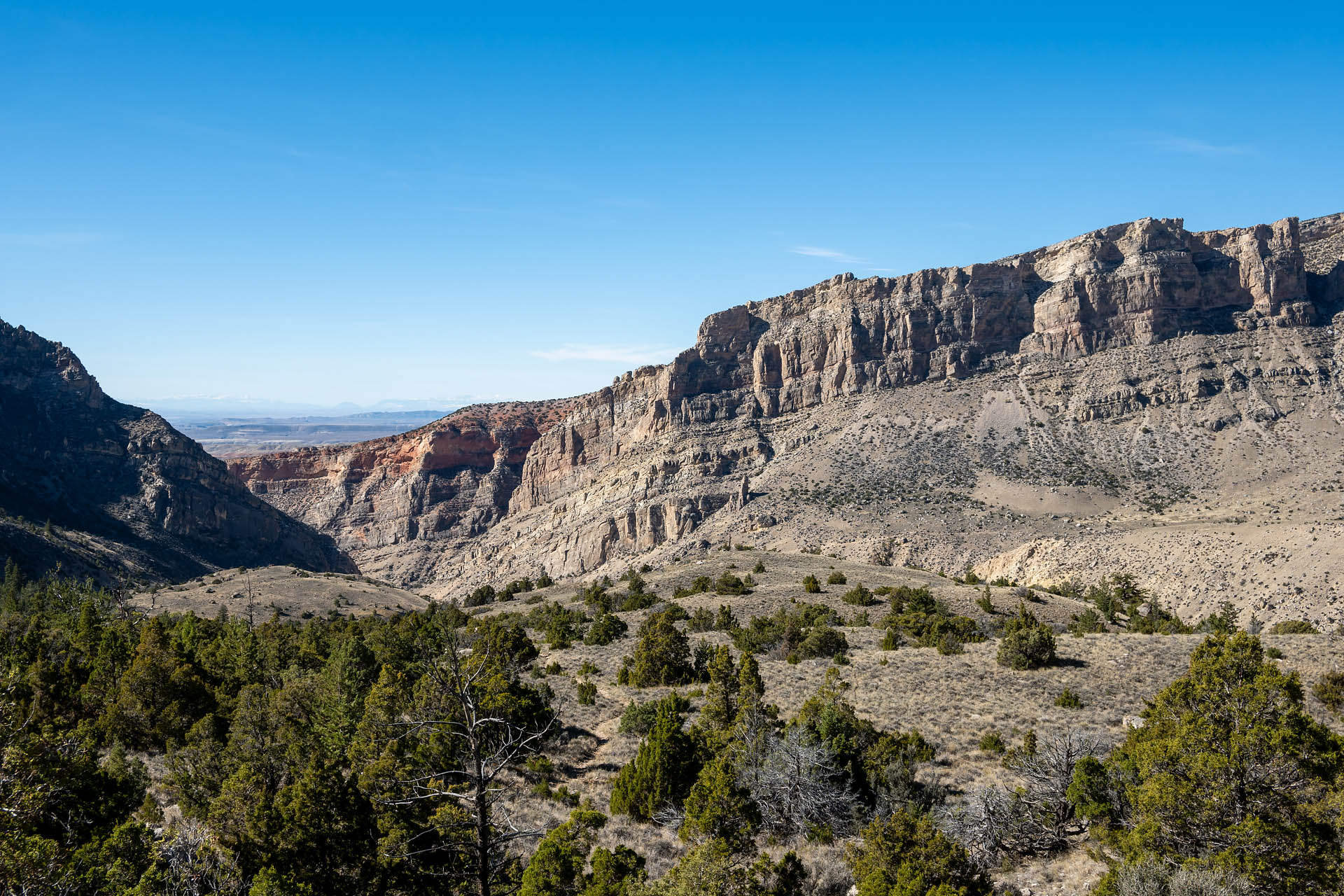 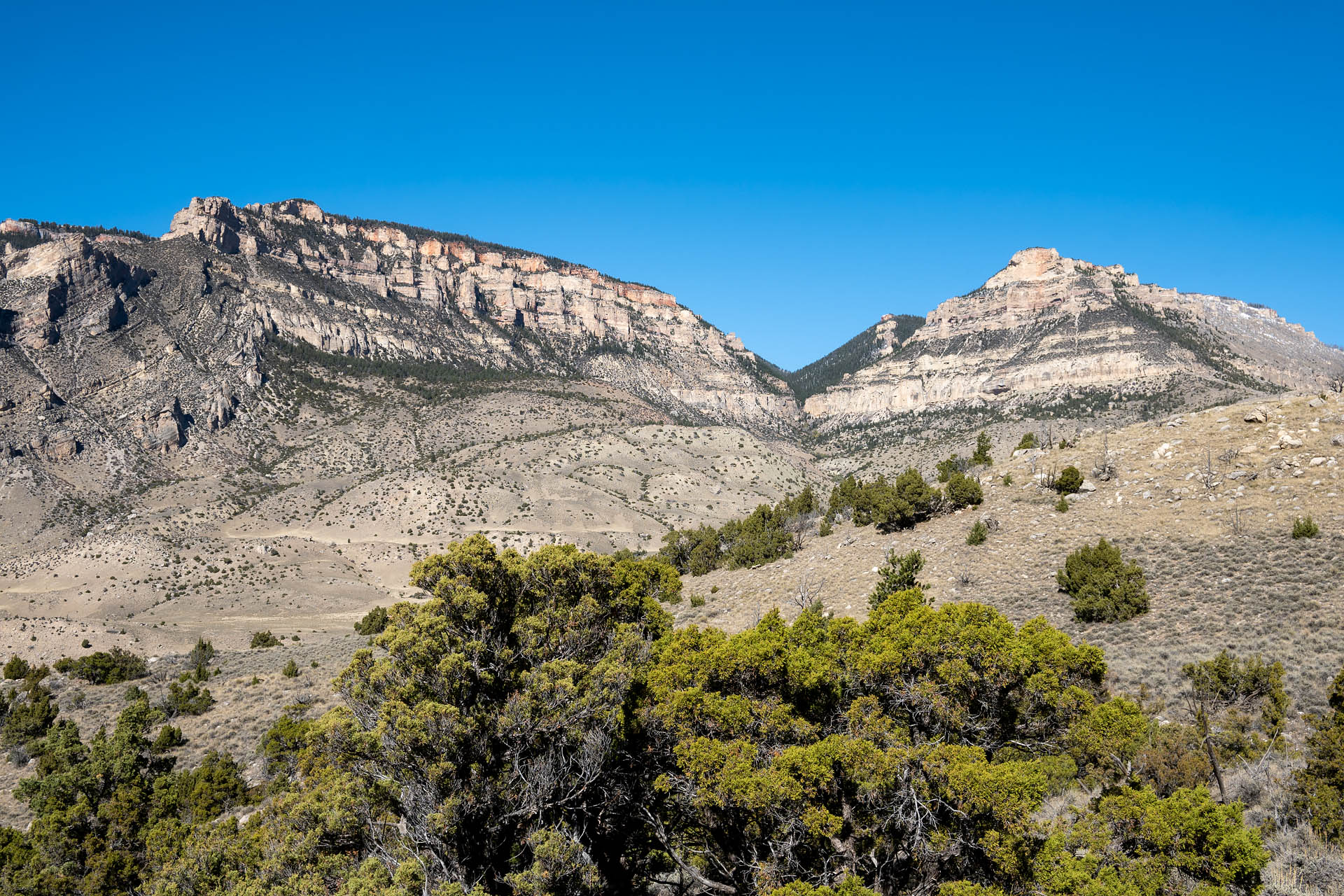 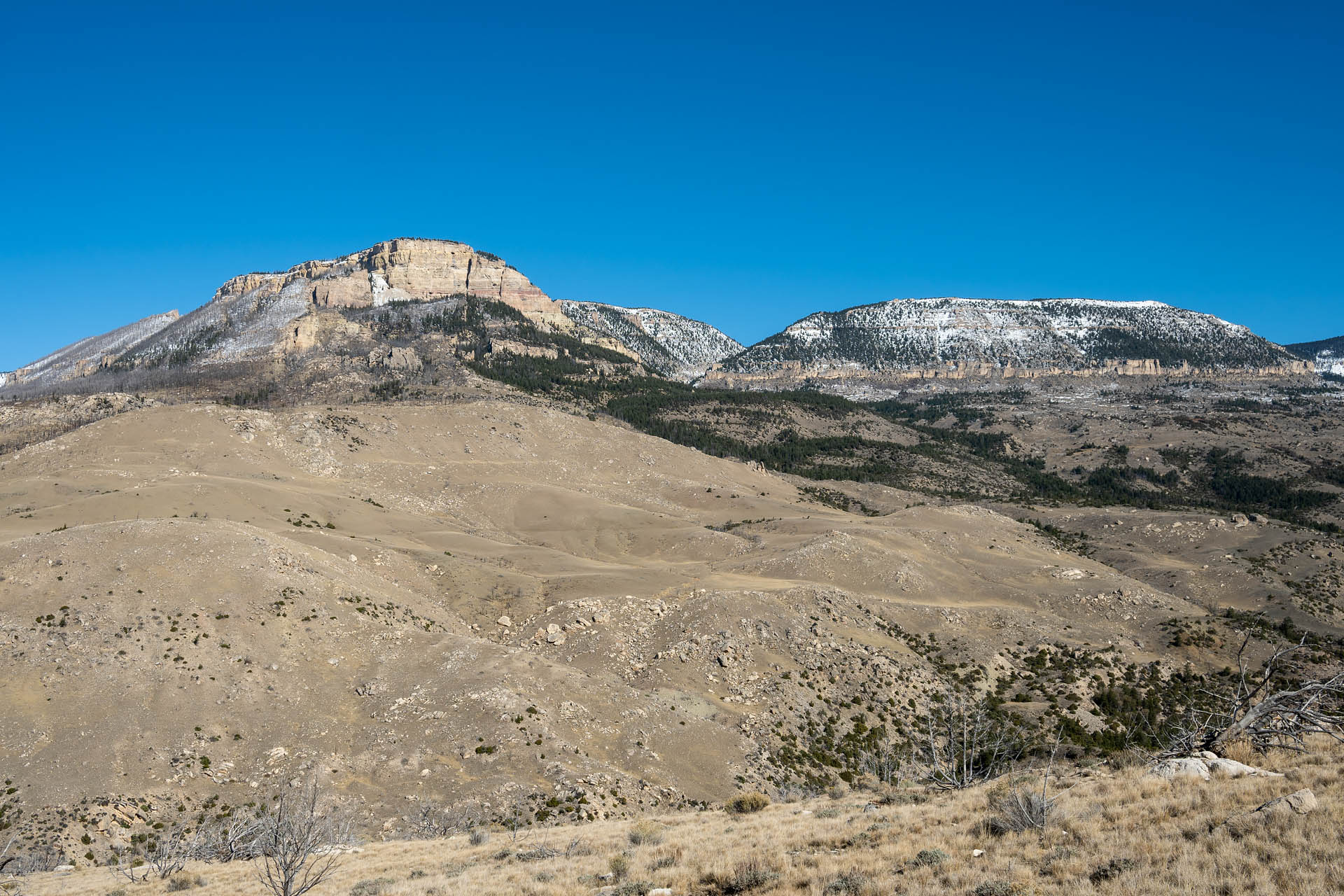 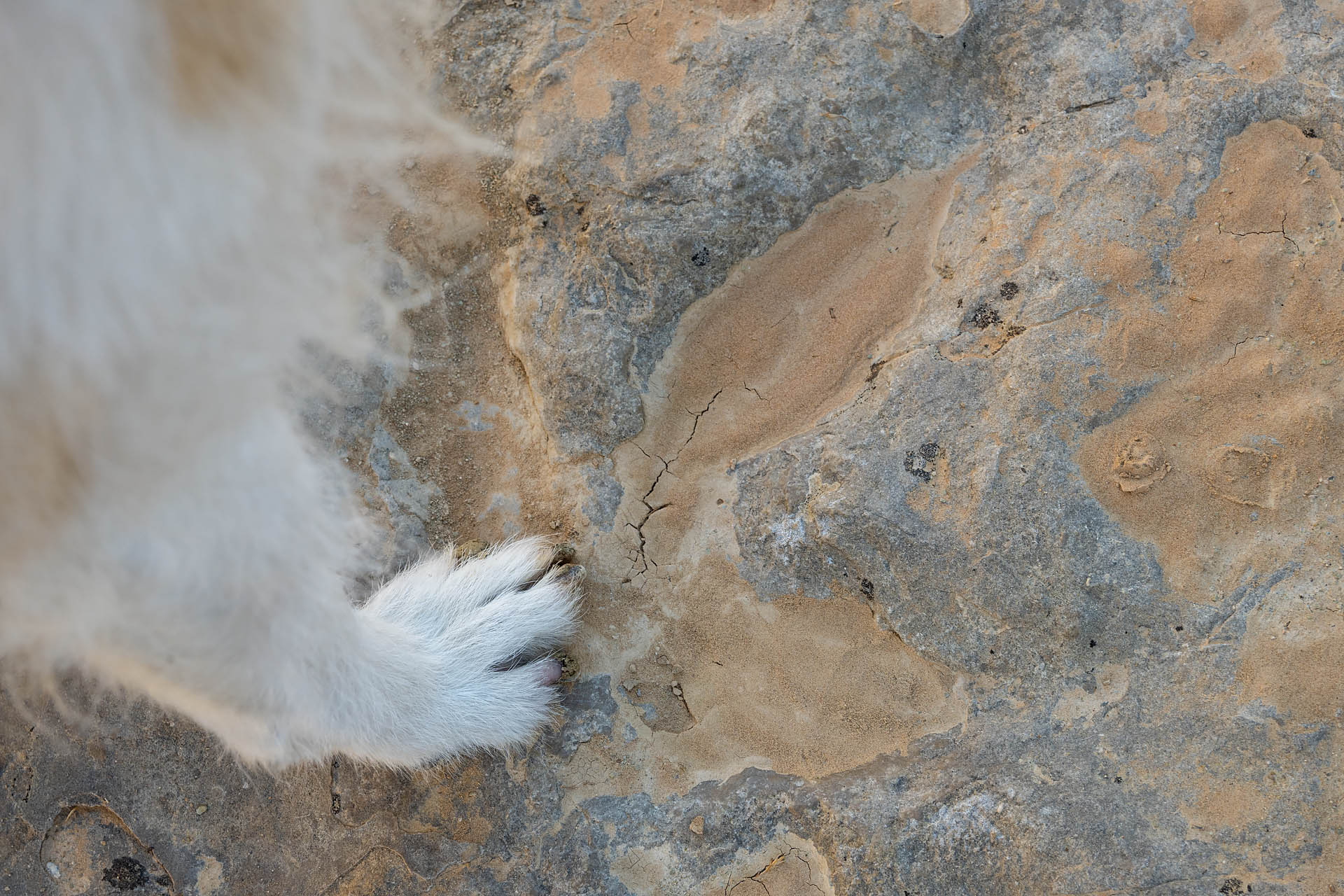