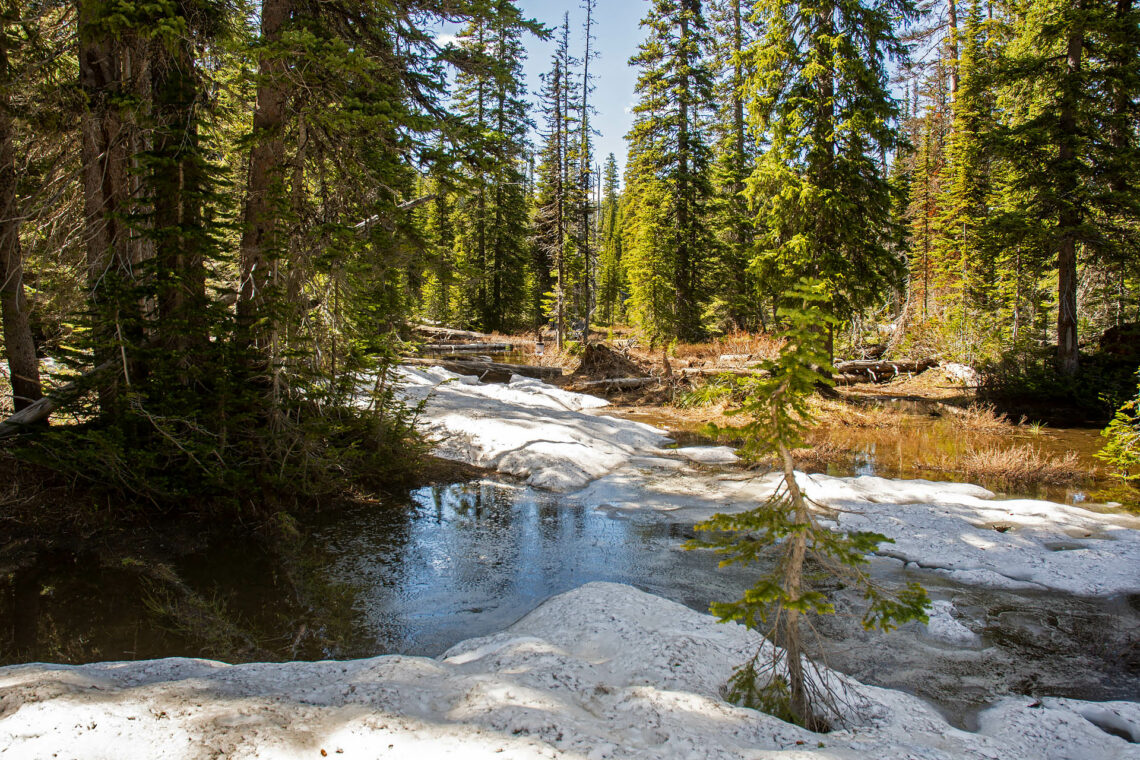 After hiking up Big Mountain, we were pretty stoked to continue exploring all the trails northwest Montana had to offer. Two days later, we thought we’d take advantage of the extended summer daylight and head for Doris Ridge after Stephan finished working. The drive from Whitefish to the west side of Hungry Horse Reservoir was over an hour, but we figured even if we hit the trail by 4 p.m. for a 6-mile hike to Doris Mountain, we’d be still be done hours before the sun set. Additionally, we’d spoken with the ranger station a few days prior, and they suggested that the area should be free of any significant snow cover.

If we had one concern as we started out, it was our ability to find the trailhead. Some maps showed a road winding up to Doris Ridge from West Side Rd (NF-895), the main throughway that runs along the western side of Hungry Horse Reservoir. Yet other maps showed no such road existing (Google Maps included). Every source I scouted listed this potential road as something different: Aurora Basin Road, #895H, Forest Road 9676, and Beta Creek Road. Some sites suggested the road was a rutted-out mess, and that low-clearance vehicles wouldn’t stand a chance making it up. No map seemed to give an estimated distance of this mysterious passageway. We were somewhat puzzled, but we didn’t care. The trail sounded lovely and we were going to give it a shot in honor of Stephan’s late Grandma Doris.

The drive to the reservoir was easy, and we were soon cruising confidently down West Side Rd. I began watching attentively when I thought the road should appear, and we were soon greeted with a large, brown Forest Service sign pointing unambiguously to the right: #895H to Doris Ridge Trail (#52). For all the chaotic inconsistency I found online and in printed maps, that turned out to be pretty friggin’ easy and shockingly well-marked. About two miles up the road, we quickly learned that low-clearance vehicles indeed stood no chance of making it up to the ridge unscathed. The road crumbled before us, giving way to huge holes and bulging boulders as the dirt track coiled in tight hairpins up the hillside.

After 10 miles and some 45 minutes of climbing we finally reached a snowbank where the road seemingly dead-ended. There was enough room for parking and even a truck pulled off to the left, so we assumed we’d reached the trailhead. A few sets of tracks led up the snowy path before us, so we gave it a go. After a brief walk, we reached what turned out to be the actual parking area, even marked with a small sign leading the way to trail #52. While the final few hundred meters of the road had evidently been snowed out, the trail before us appeared completely clear. When we saw how sun-exposed the ridge trail was, we figured we’d make it up to Doris Mountain with no problem.

About a mile up the trail, we quickly discovered we were wrong. As the trail dipped into a shaded thicket, the snow returned. Not caring about a bit of snow, we continued on, only occasionally sinking up to our calves. Suddenly, the trail disappeared entirely, and the snow gave way to a veritable sea – surprisingly, up to a couple feet deep in places. For the next thirty minutes or so, we attempted to use the maze of fallen logs as balance beams, refusing to surrender to the challenge ahead of us. We made it maybe a couple tenths of a mile zigzagging unsteadily over any solid contact we could find before we finally looked at each other with skepticism. I think we’d reached the same verdict – it was impassable. There was no visible trail, no trail sign, and no end in sight to the water. If we had been wearing fishing waders, maybe we could have done it. But, alas, we were not. We were also being towed by a now crazed and bedraggled little mutt, and had to further pause for a bit of first aid (I sliced my hand open trying to steady myself on a razor sharp, splintered branch). Final score: Snowmelt – 1, Us – 0. 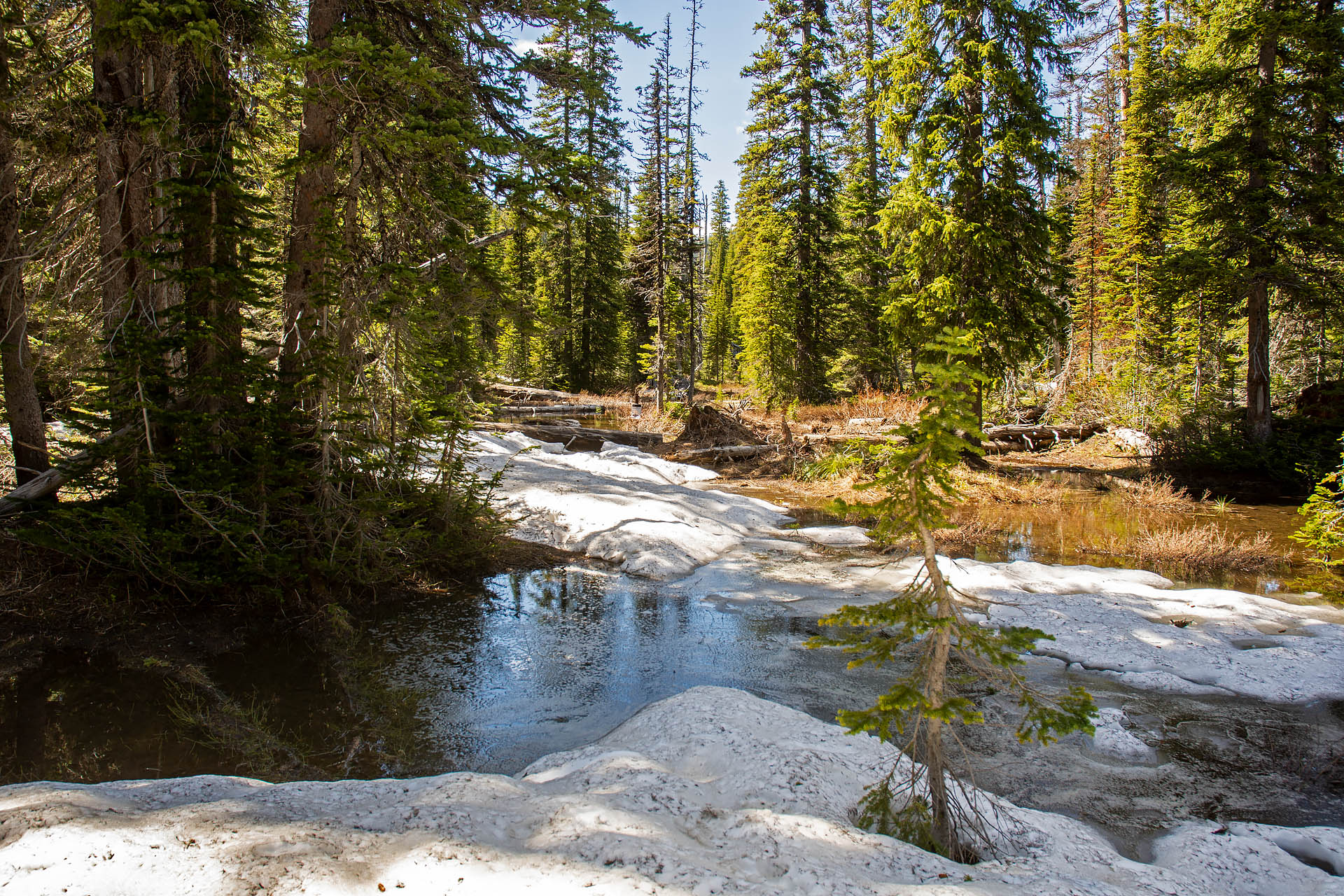 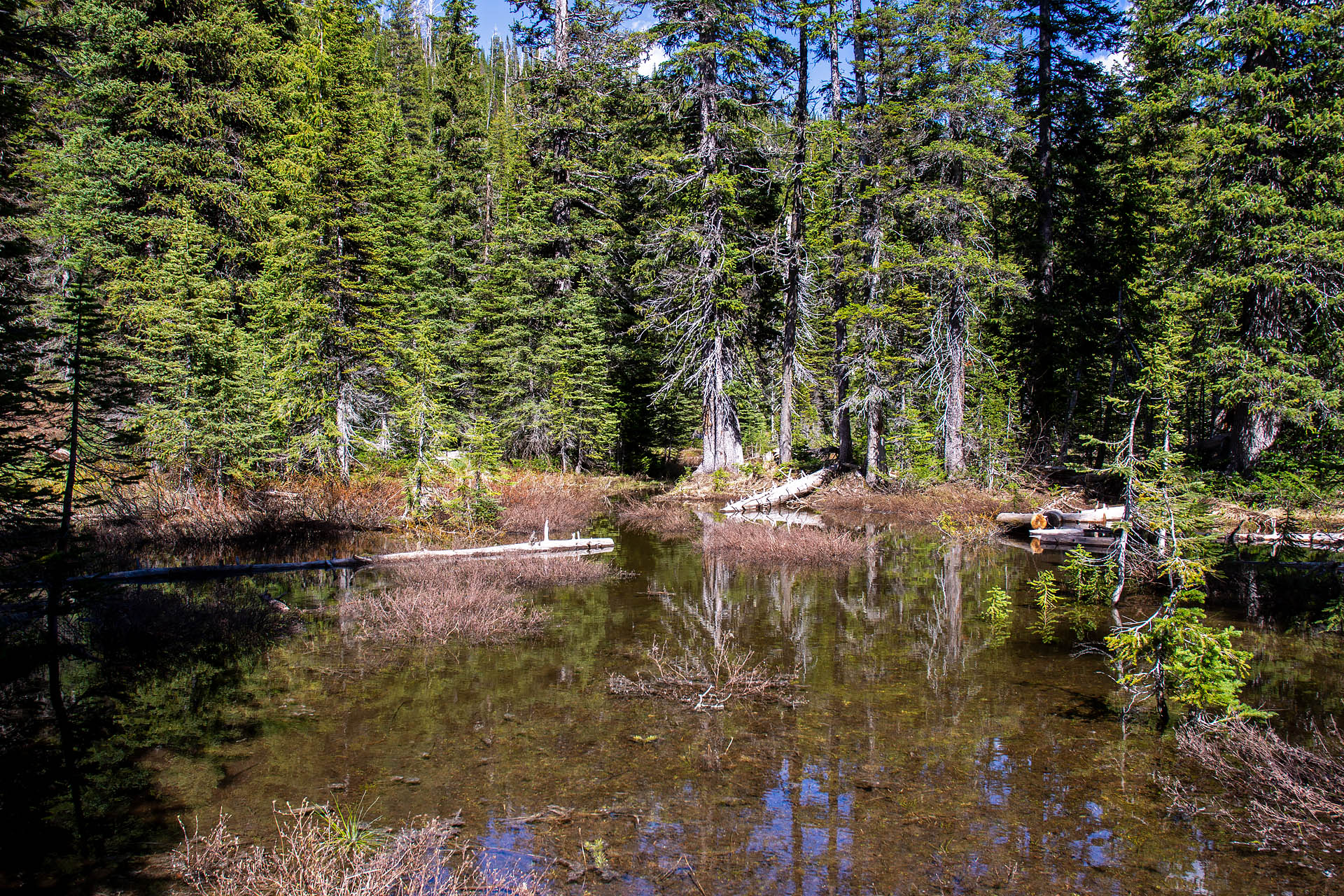 But like any good adventure, the trip was hardly a total loss. We’d parked near a sprawling field of yellow glacier lilies, and the late afternoon sun on the stunted blooms was just gorgeous. While the wind mocked me as I tried to snap some pictures, I was in my glory admiring all small blossoms. 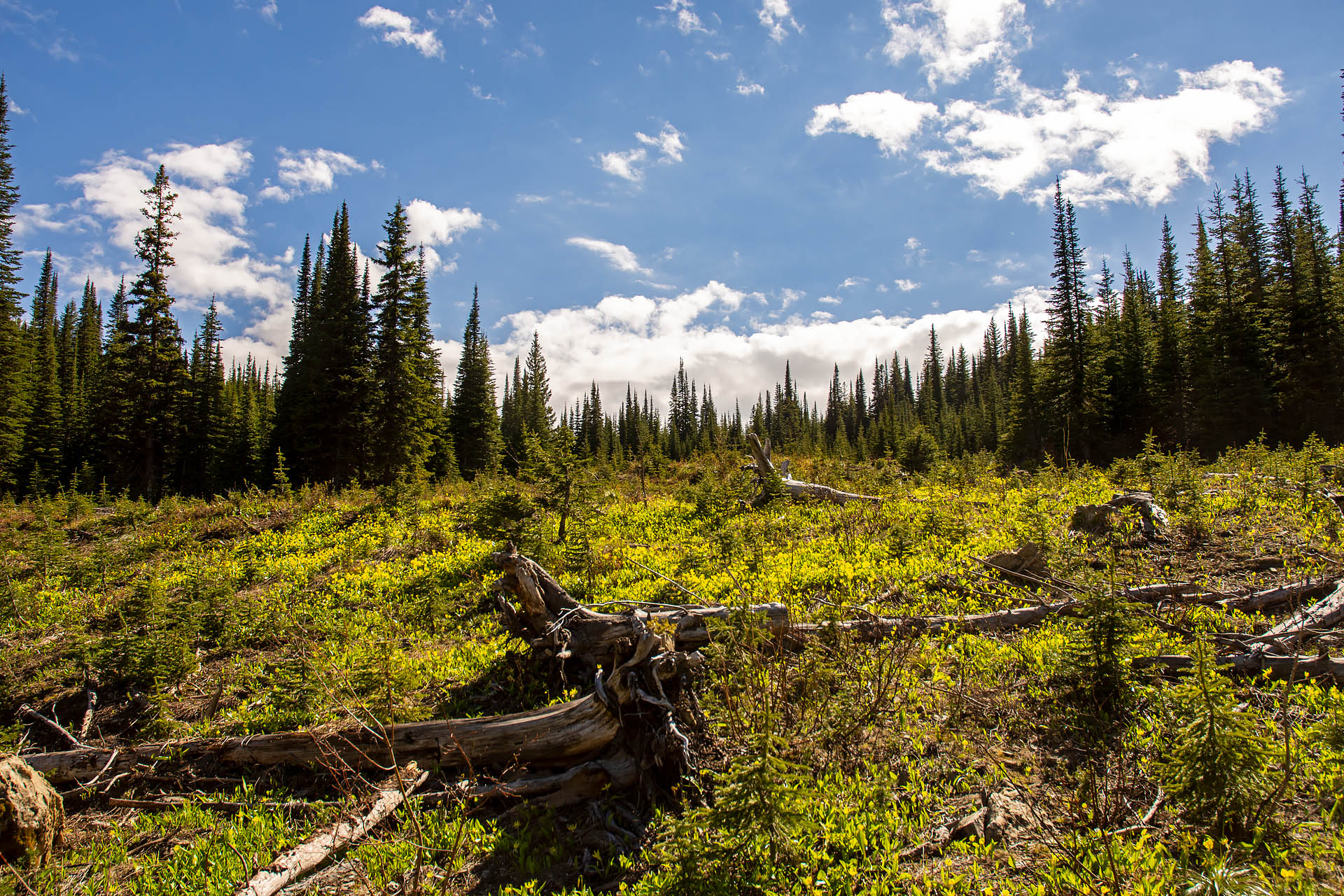 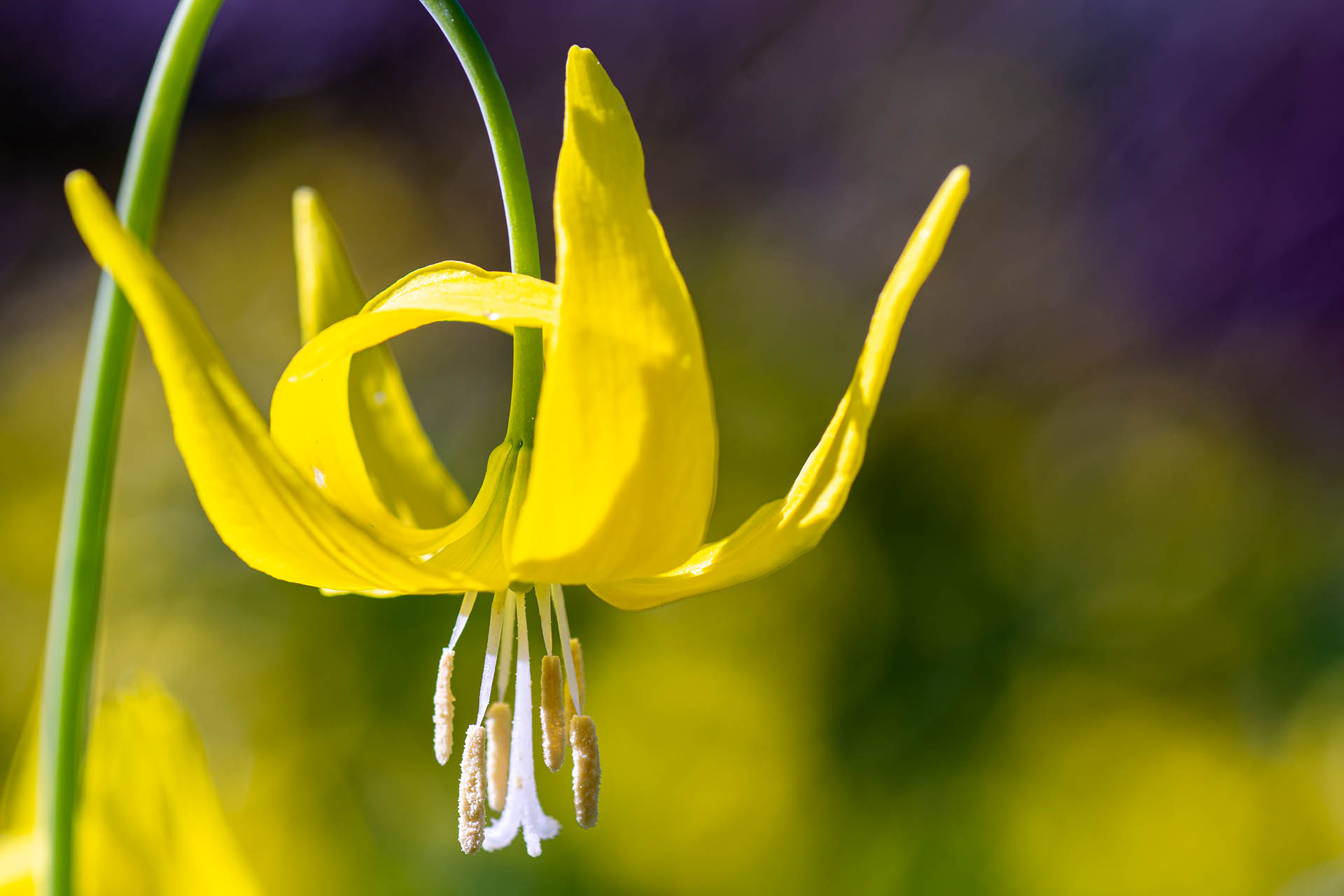 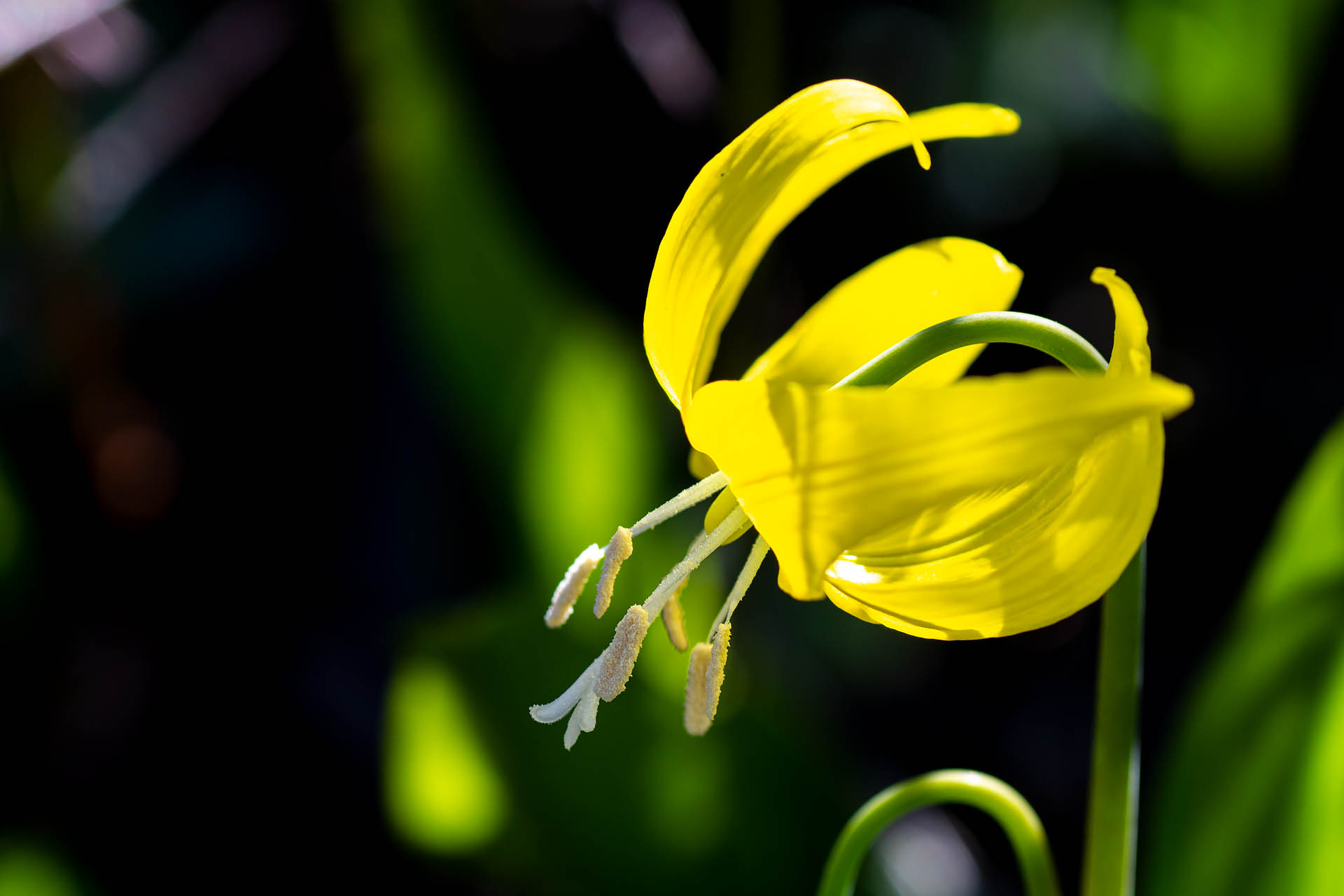 The highlight, though, was being able to take in the spectacular scenery on the drive back down the rutted road. The views looking out over Hungry Horse Reservoir and the peaks of the Flathead Range were just spectacular! The air was crisp and clear, the sun dazzling, and we found ourselves pulling off at every opportunity to pause and enjoy the vistas. 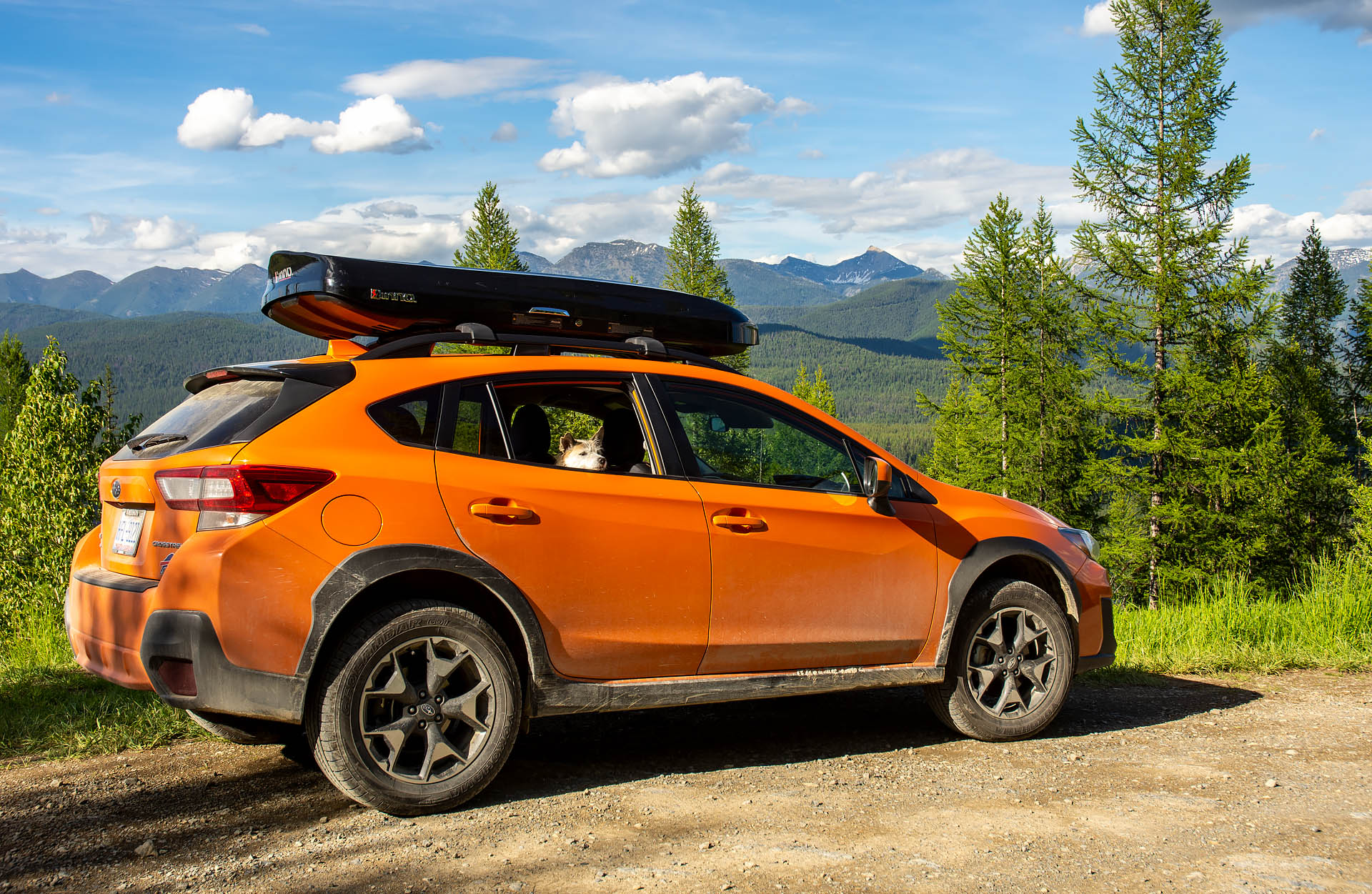 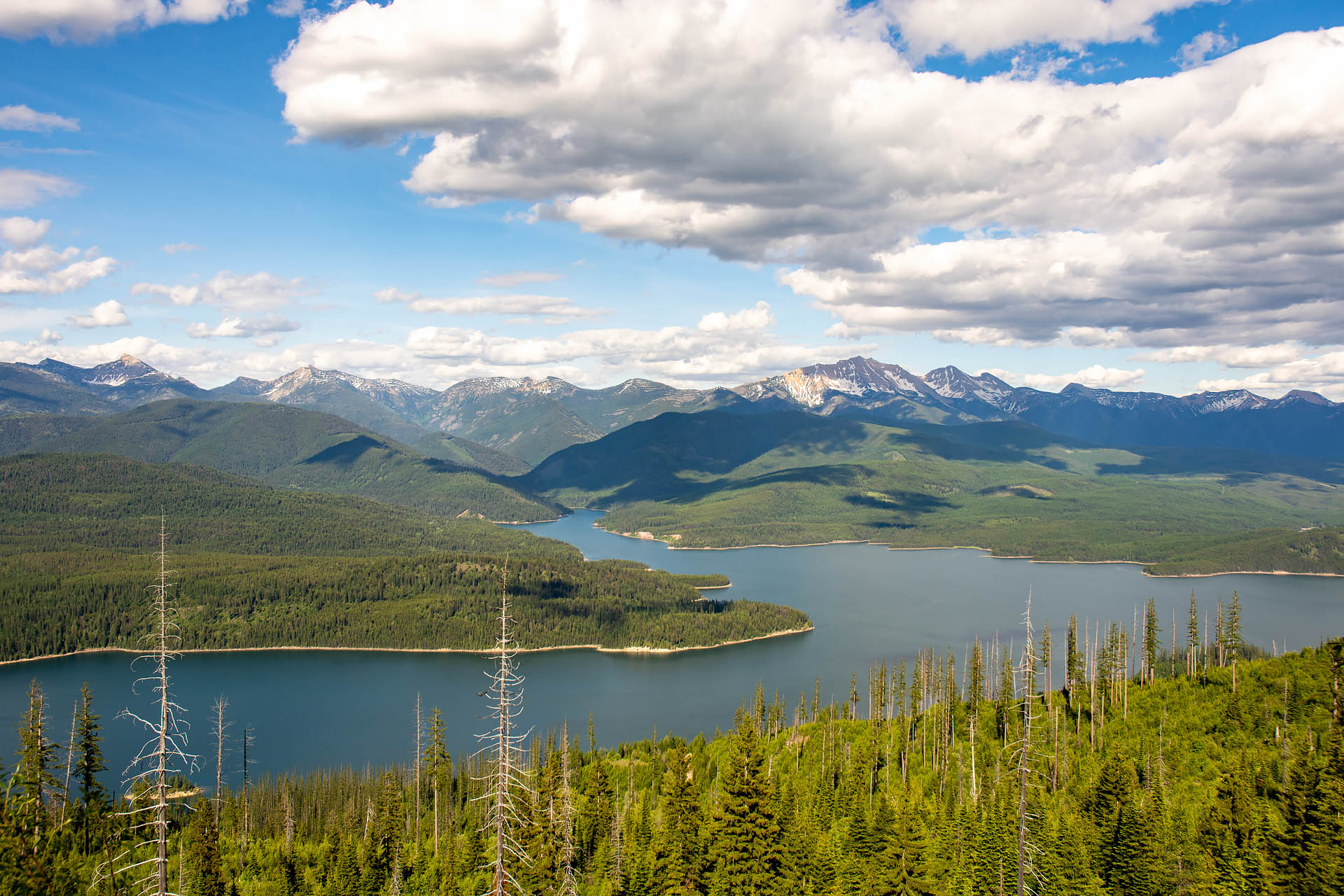 While we may have had to abort the hike, the drive along the all-but-abandoned back road was well worth it. We never expected it would be that beautiful, and it was an absolute stunner of an afternoon. As for you, Doris… we will be back!