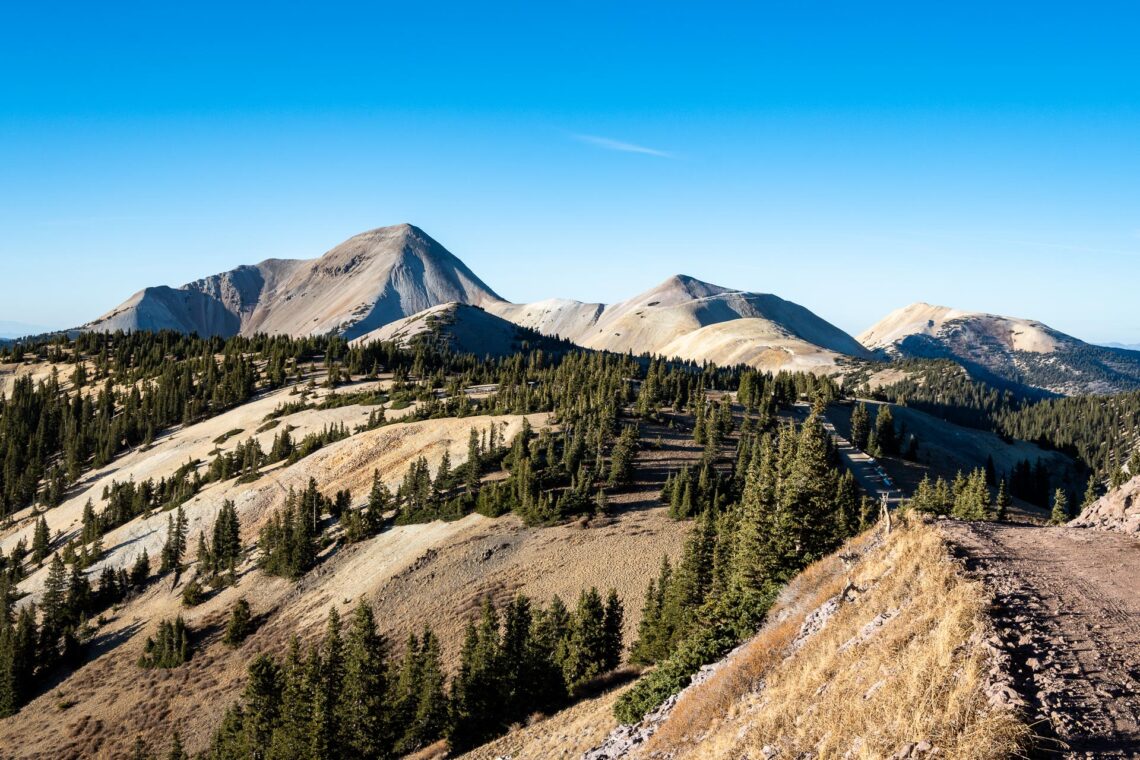 It seems like most travelers visit Utah for the rugged terrain that defines the state’s Mighty 5 National Parks – red rock arches, striated canyons, and gangly hoodoos that make up a Jurassic-era landscape and conjure up images of Allosauruses lumbering across the land. And while those scenes are certainly worthy of appreciation, I found myself taken with a lesser-known, more unassuming part of central Utah – the rolling mountains of Fishlake National Forest.

Fishlake National Forest covers nearly 1.5 million acres and is home not only to Utah’s largest natural mountain lake (Fish Lake), but also Pando, one the oldest and largest organisms on Earth. The quaking aspen colony covers an area of more than 100 acres and weighs in at nearly 13 million pounds. Scientists aptly bestowed upon it a Latin moniker meaning, ‘I spread out.’ While Pando’s exact age is unknown, parts of its root system are thought to have taken hold at the end of the last ice age, nearly 12,000 years ago. The protected forest is also home to the Tushar Mountains. With a number of peaks soaring above 10,000 feet in elevation, the Tushars are Utah’s third-highest range.

During our six-week stay in Utah, we made the small town of Monroe our home base. With a population of around 2,500 residents, Monroe is nestled in a small valley surrounded to the west and east by the protective peaks of Fishlake. While we had access to the forest just a couple miles from our back door, we found ourselves habitually driving about an hour south to the Beaver District’s swath of the Tushars. The mountains and trails here were stunning, isolated, and all but deserted. It was probably our favorite spot in Utah. 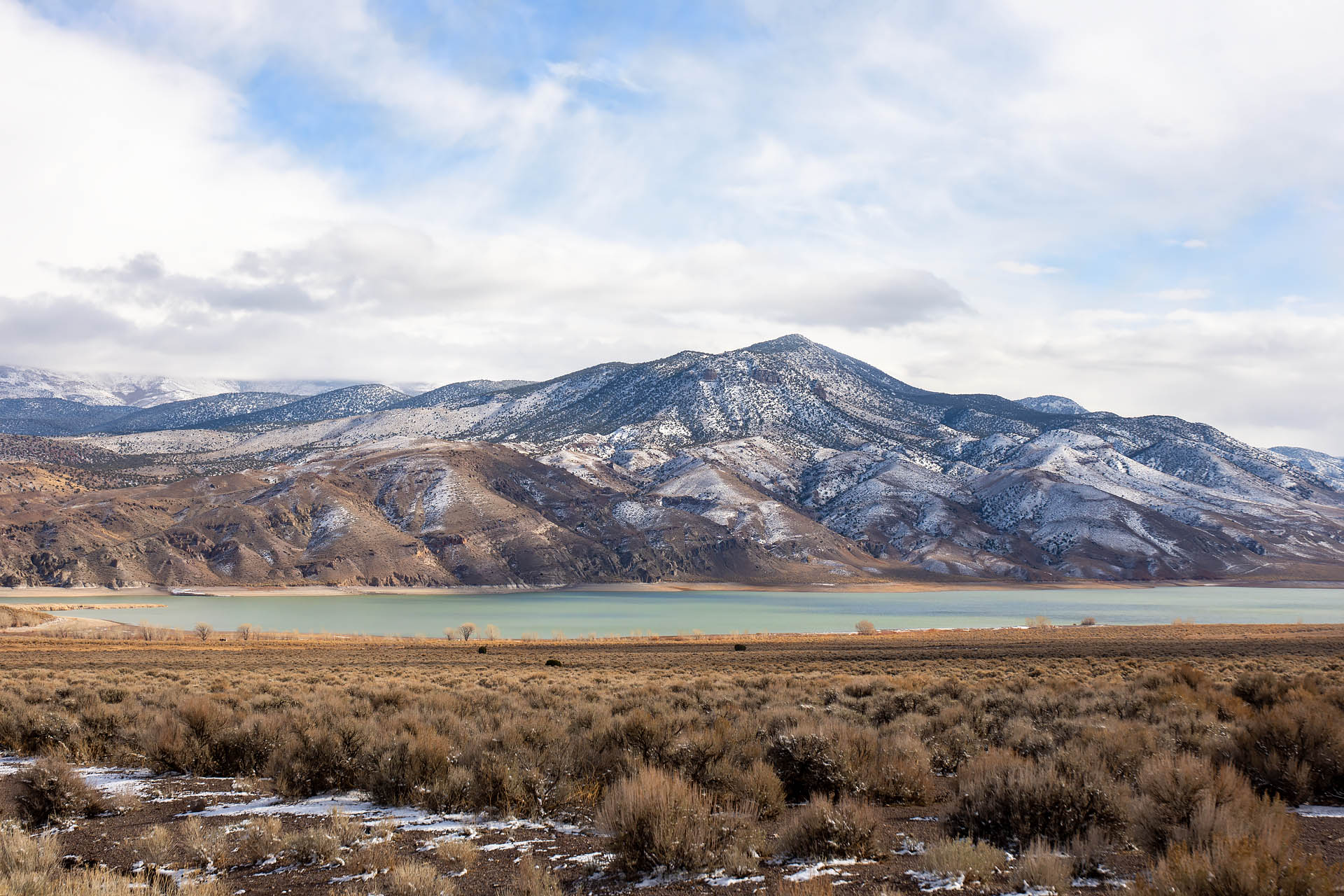 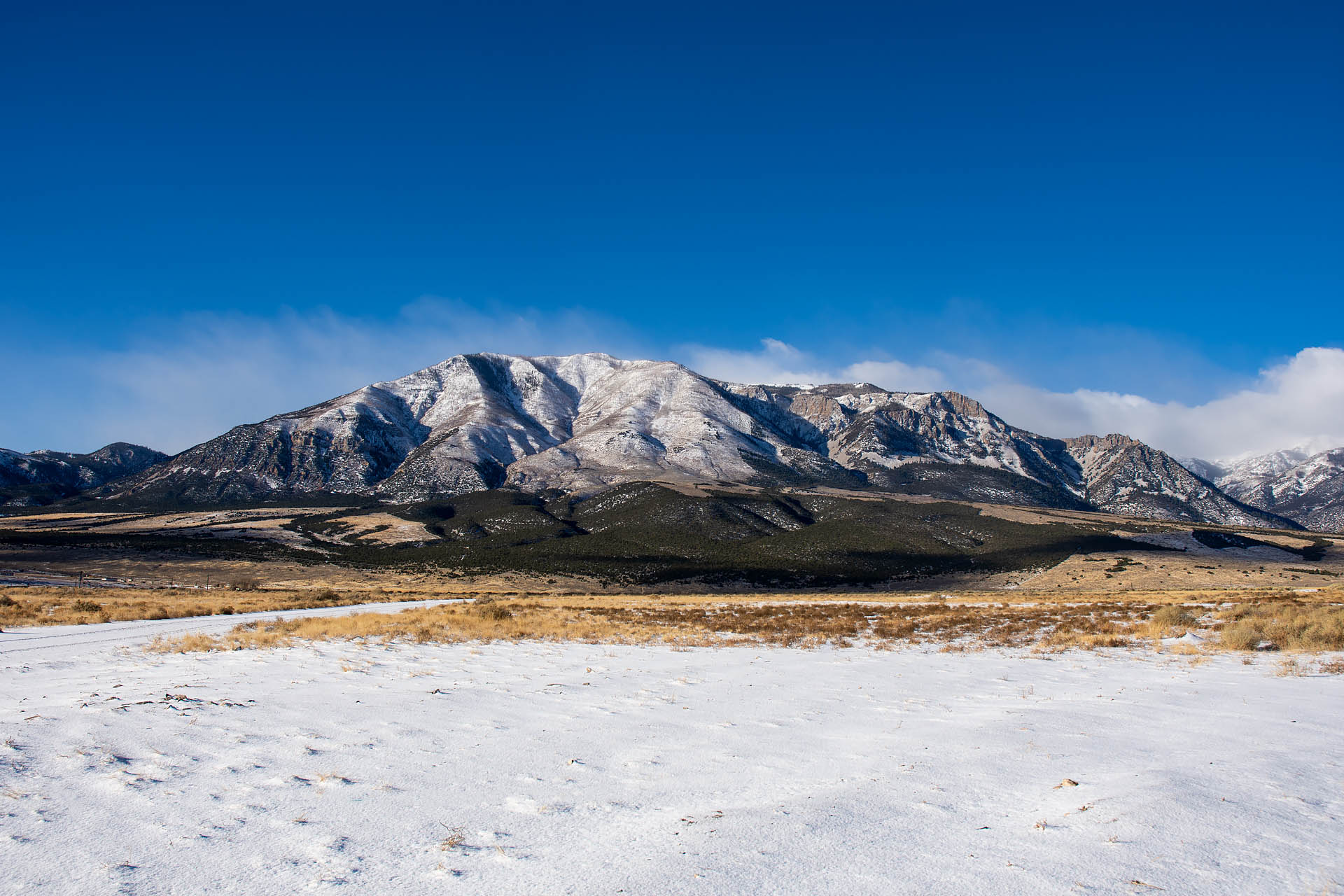 Located in the area of Big John Flat, about 20 miles northeast of Beaver, Mt. Holly and Delano Peak (described below) are two easily accessible summits that are also a couple of the highest in the Tushar Range. Rising to almost 12,000 feet, Mt. Holly’s highpoint can be reached with a little bit of route-finding just off the Skyline National Recreation Trail (note: because you’ll be going off trail for a bit, it’s especially important to have a map/GPS route pulled up while you’re hiking).

From the town of Beaver, follow UT-153 east for about 16 miles. Take a left onto Sunset Drive (Forest Road 123), following the signs toward Big John Flat. The trailhead for the Skyline National Recreation Trail1 (#225) is on the right after about four miles and is easy to spot – there’s a yurt and small parking area. Starting from the parking area, the trail heads southeast toward Mt. Holly and Big John Flat. On the other side of the forest road, the Skyline NRT heads in the opposite direction toward Blue Lake and Mount Baldy (an alternate hiking option).2

From the parking area, the trail first climbs gently for about 0.8 miles to the top of a small hill, shrouded with a thicket of tall pines. Standing at the edge of the hillside, you get your first glimpse of the high ridgeline and neighboring Delano Peak. The trail then descends down the hill’s edge to the northeast, through the sprawling meadows that stretch out to the distant summits. For the next 0.4 miles, the trail is easily discernible as it follows a small wash (Merchant Creek) across the open meadows. 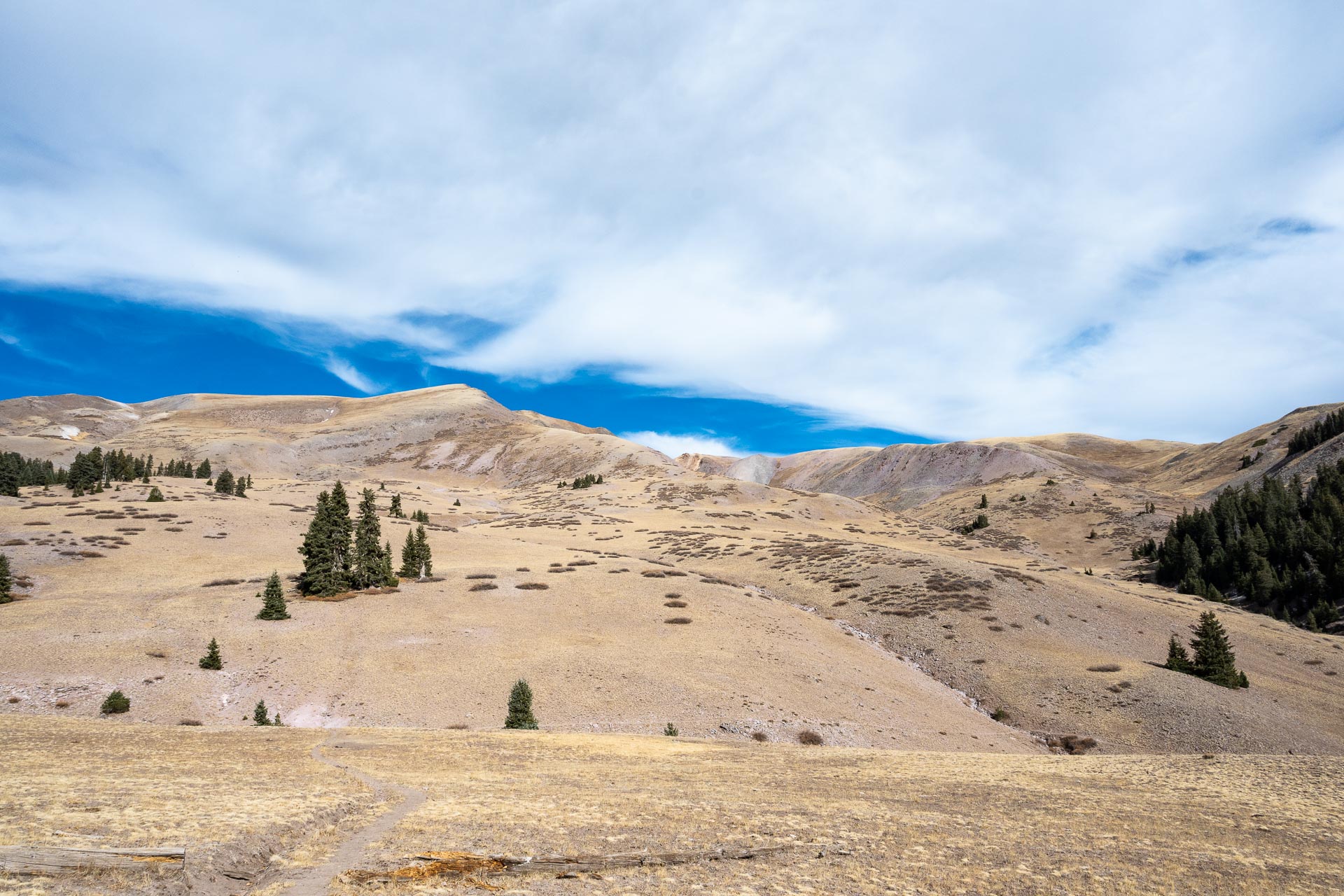 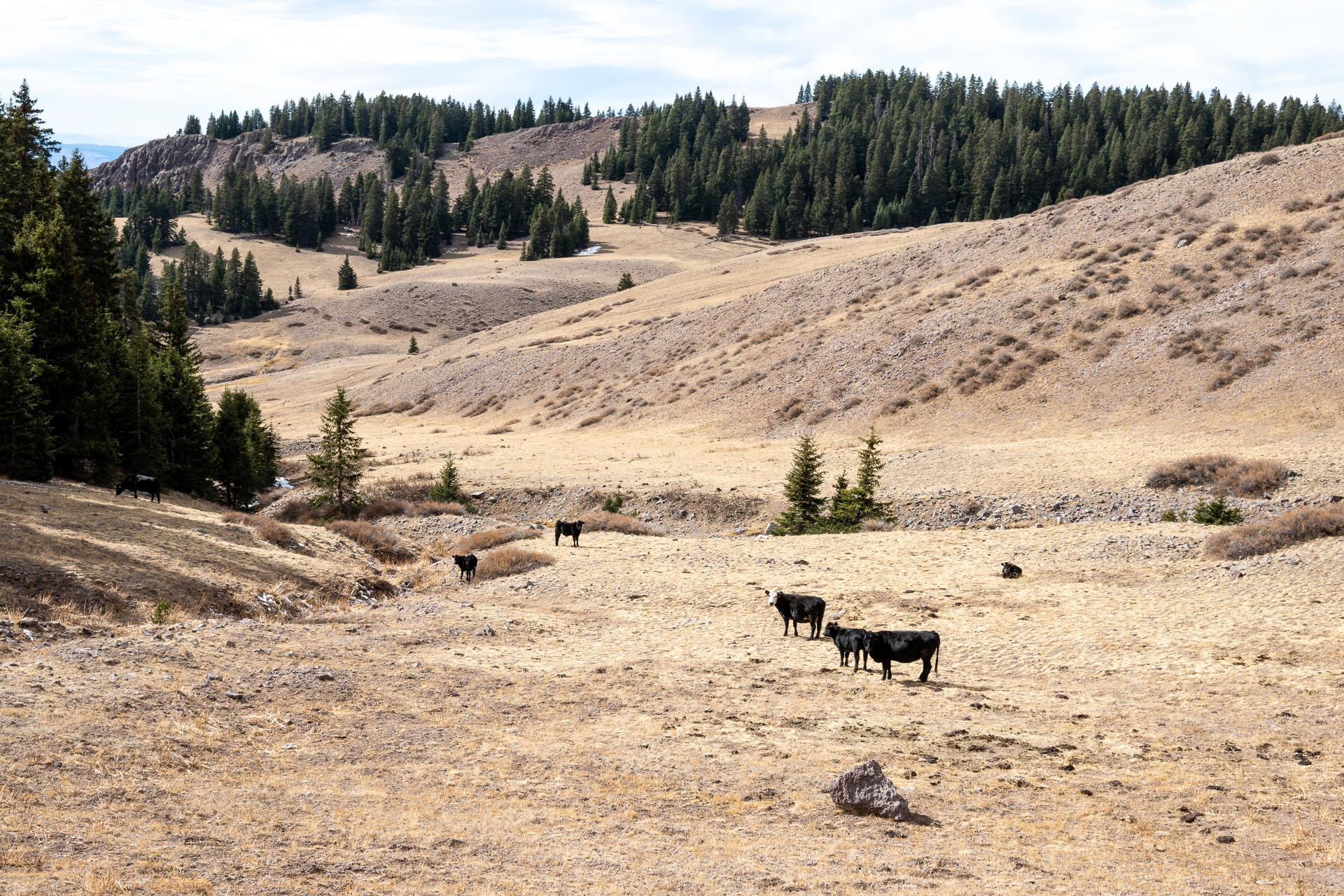 After about 1.2 total miles on the trail, the route to Mt. Holly makes an abrupt left as it parallels Merchant Creek. Though the intersection is unmarked, you can vaguely make out the path as it ascends the wash toward the east. It’s fairly easy to miss at first, and if you look at our GPS track, you can see we speak from experience. If you keep going straight (slightly right) here instead of turning left, you will bypass the summit, instead continuing on the Skyline NRT (#225) to Big John Flat as it continues south for several more miles.

From the turnoff at the creek, the trail steepens quickly, climbing 1,400 vertical feet over the next 1.6 miles to the summit. The trail comes and goes through this area, fading into and reemerging from the landscape as it follows the contour of the creek up to the ridgeline. While the trail disappears continually, route finding is pretty easy through the short grasses of the alpine meadows. Skirting the edge of the ridge, it’s surprising how precipitously the terrain drops off on the other side. While the southern face of the peak is a fairly modest slope of grass-covered hillsides, the northern face is ridiculously sheer. 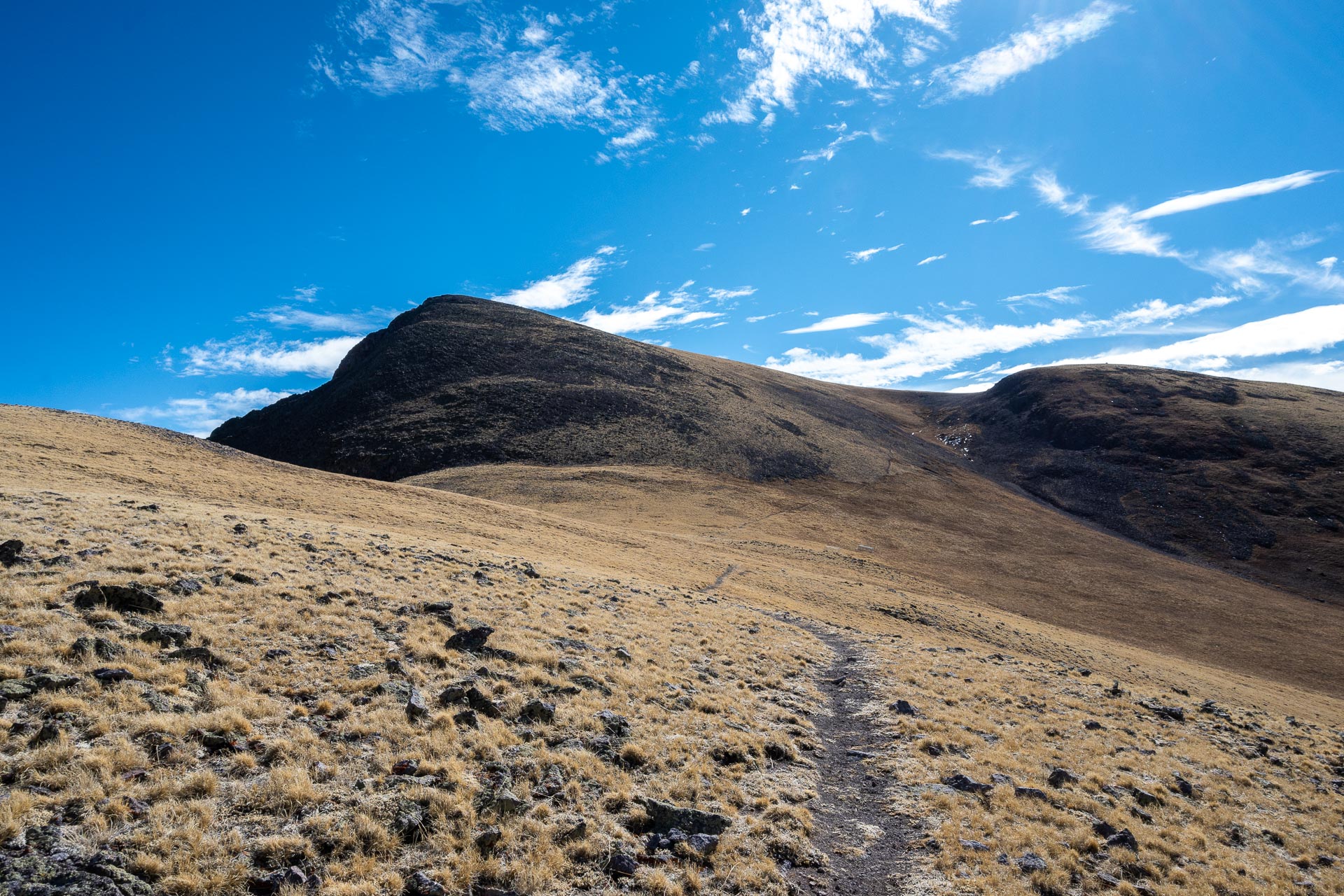 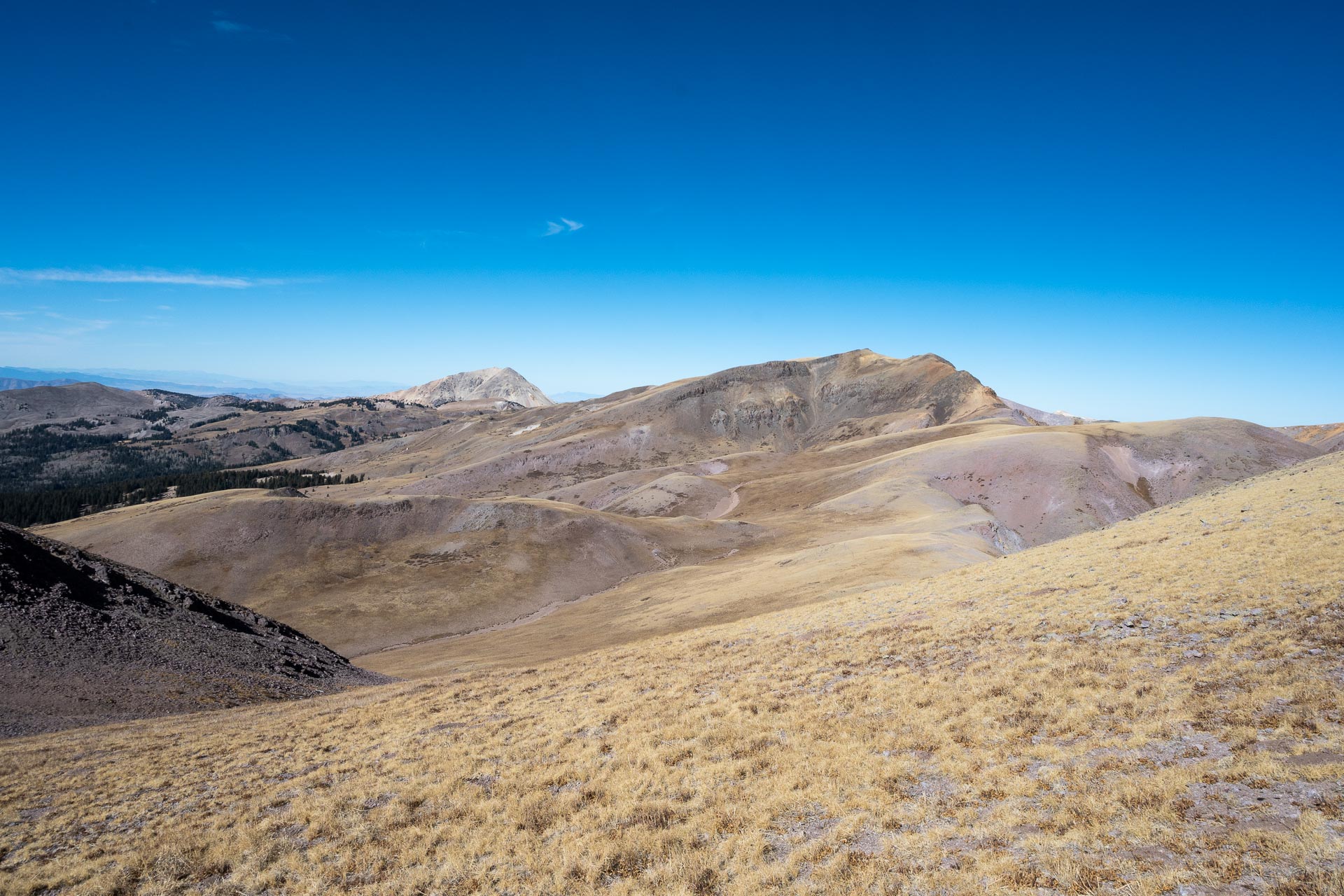 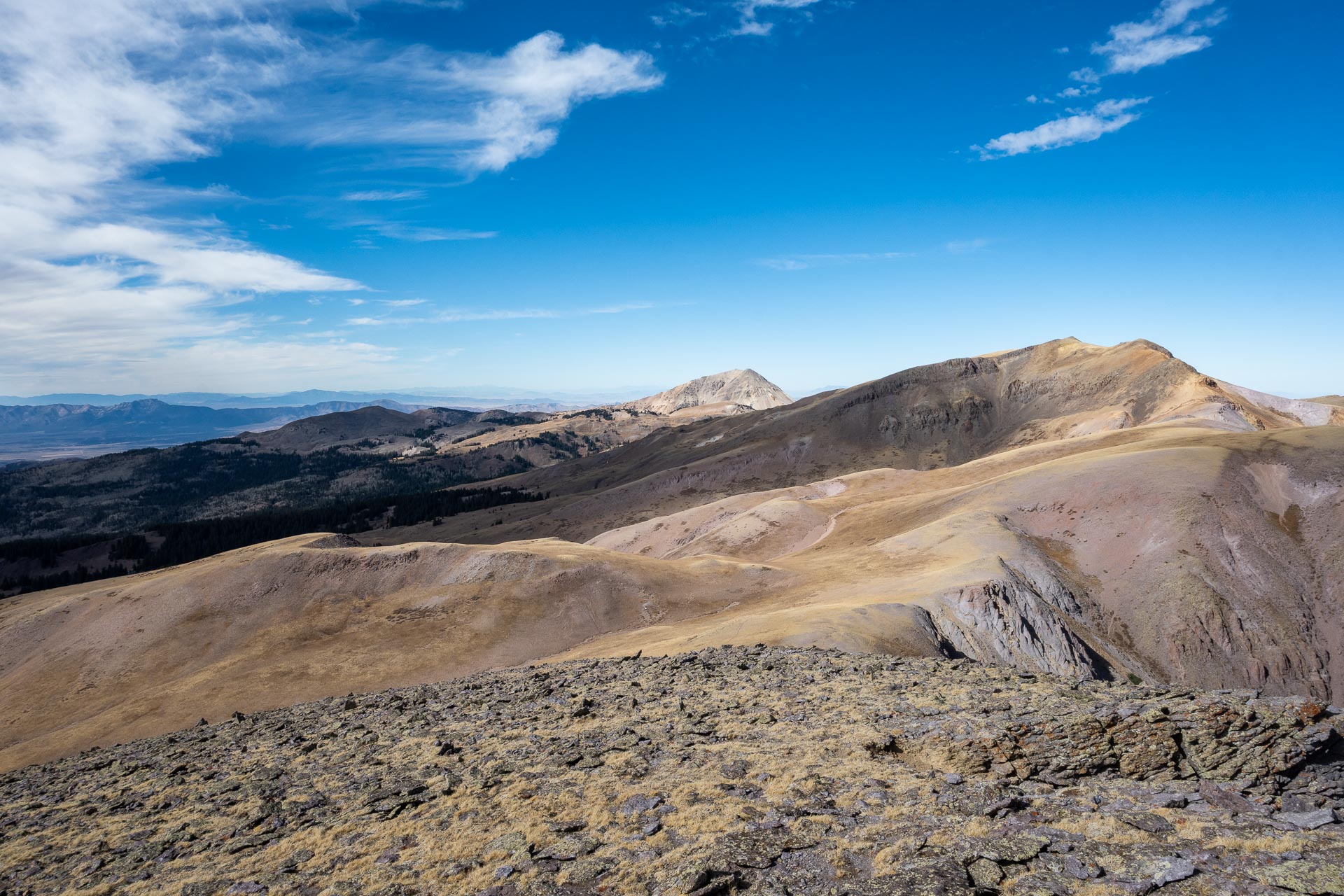 Following the ridgeline, the discontinuous vestiges of a path eventually lead to the 11,985’ summit of Mt. Holly, which is marked with a formal sign and black mailbox containing a summit register. From here the views are sweeping, looking northwest to Delano (12,169’) and a distant Mt. Baldy (12,090’). Looking toward the northeast, you can visually follow the ridgeline out to Mt. Brigham (11,710’). 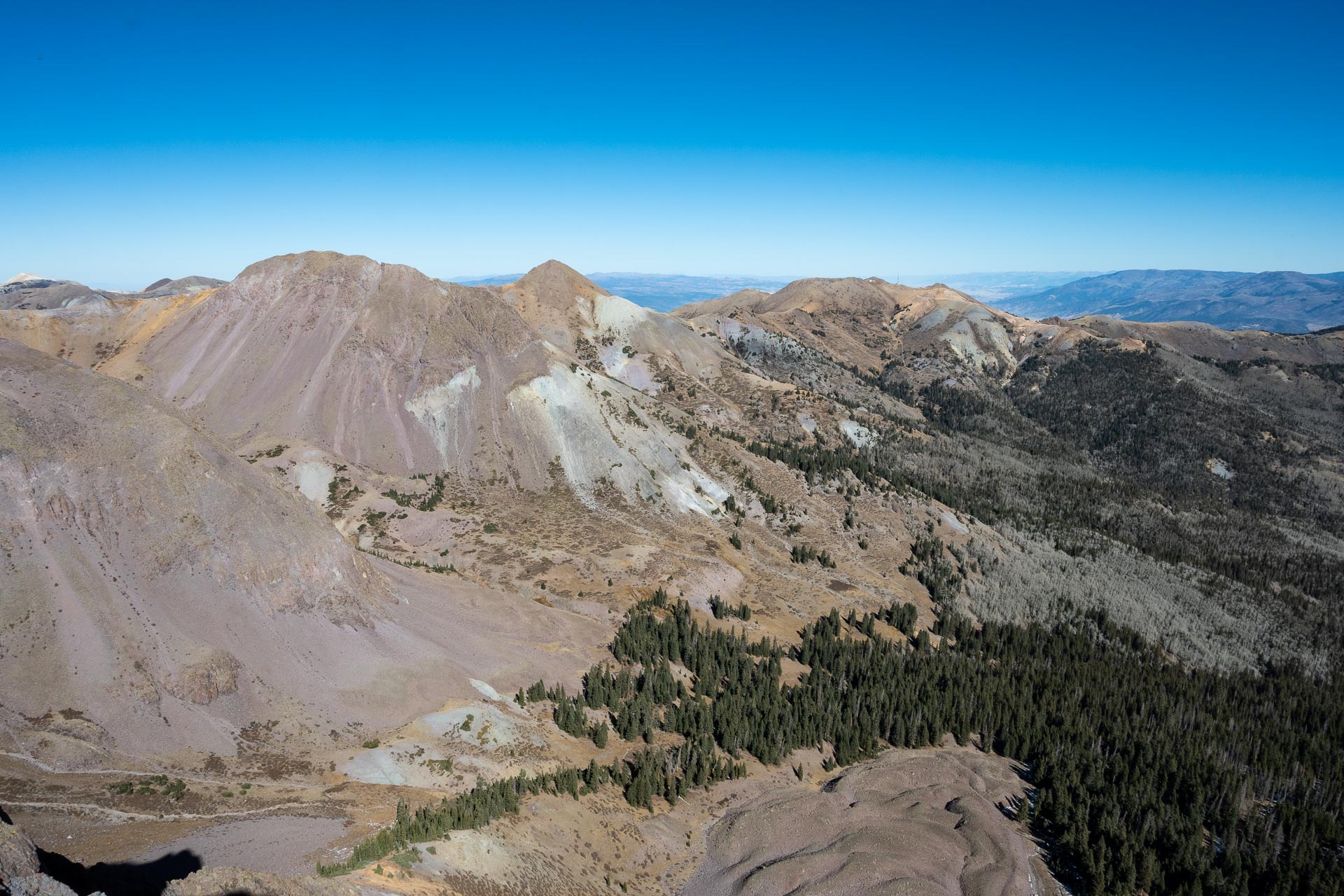 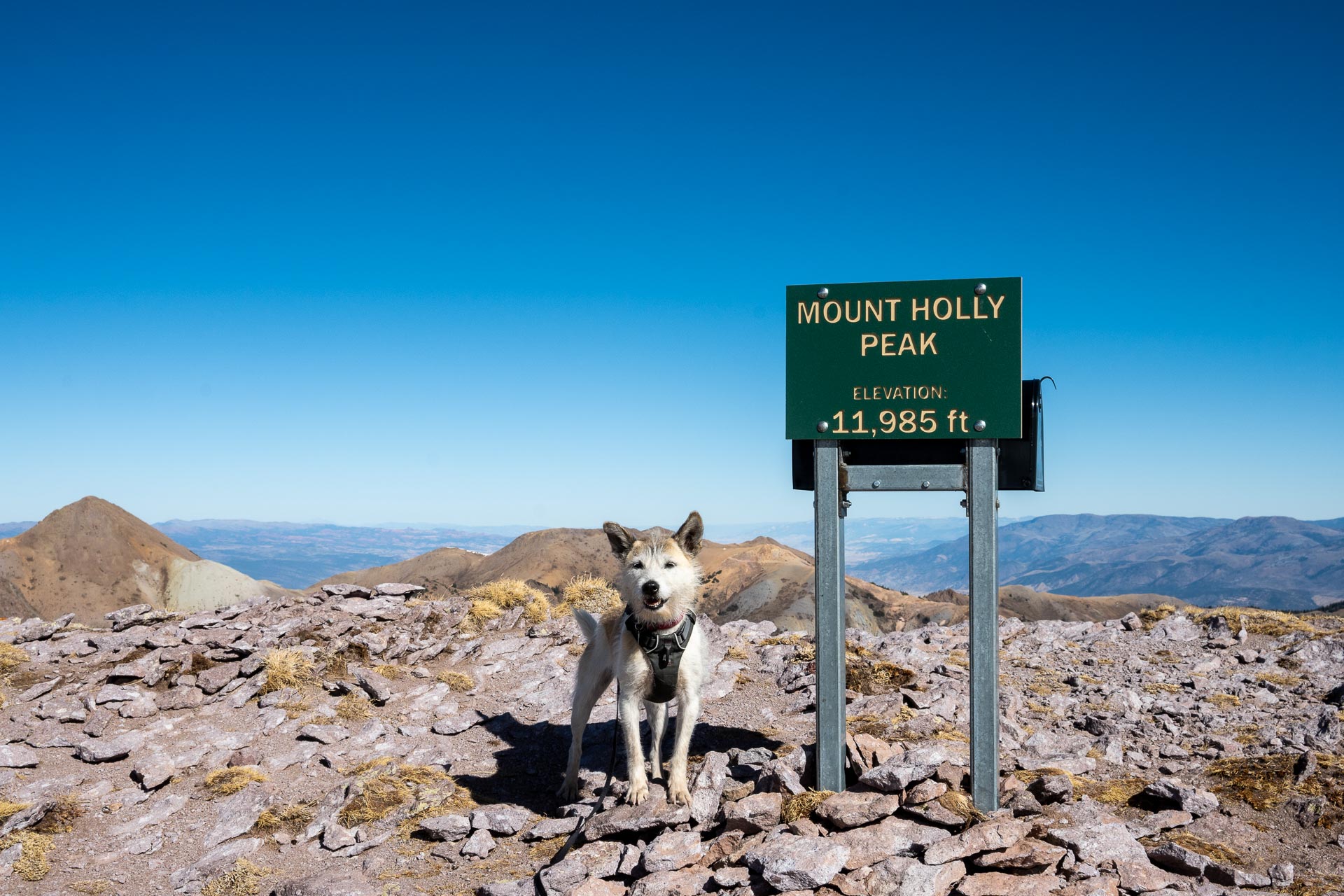 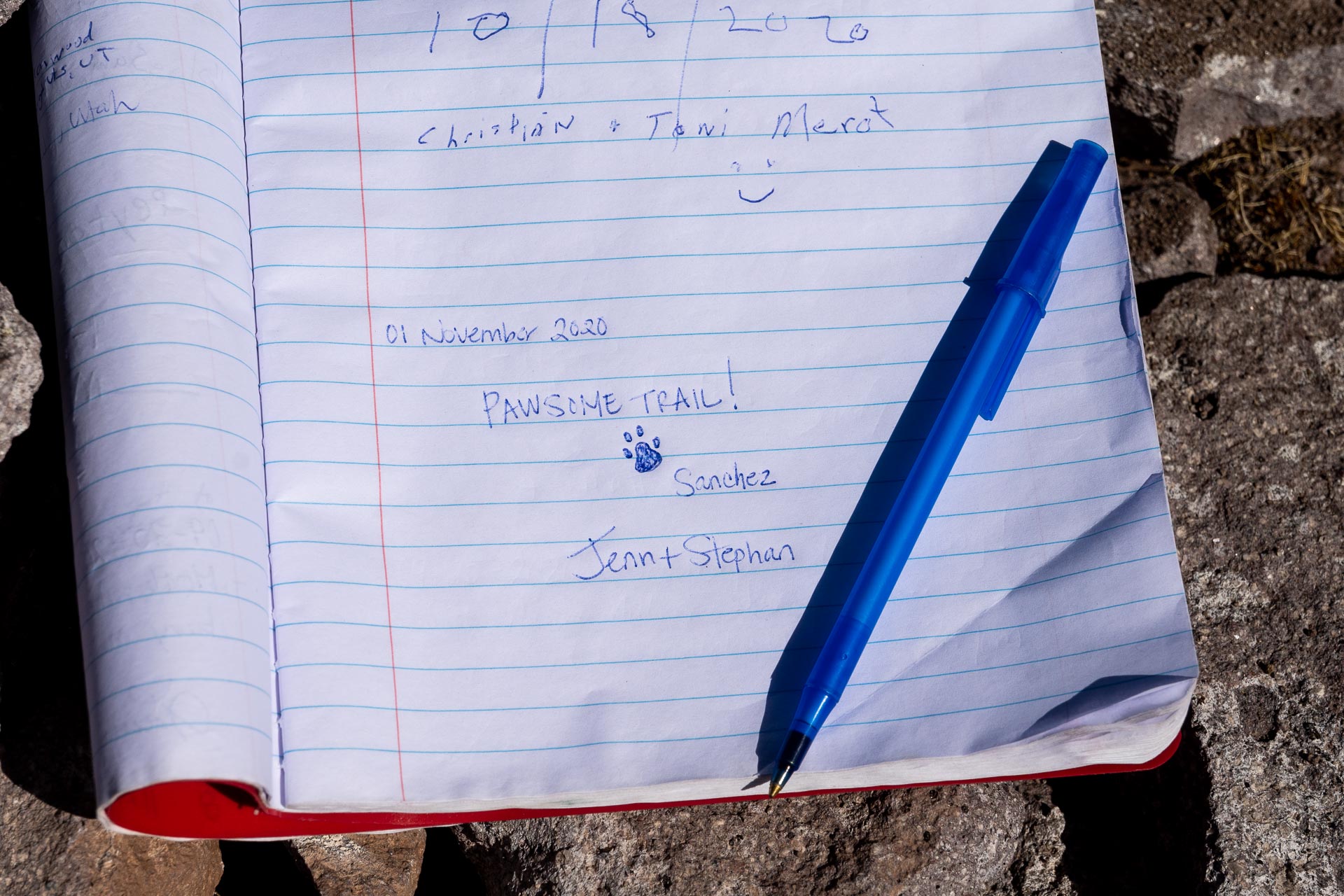 The trip to Mt. Holly was our first hike in Utah and one we particularly enjoyed. It was a little shorter than we’d normally pick, but it was perfect for an afternoon outing after a half-day of work. Sanchez had a great time on the trail and we relished in having the entire route to ourselves. After a month of hiking around Colorado’s San Juans, we never imagined we’d once again find ourselves alone on a trail.

Total distance: 6.1 miles (about a half mile shorter if you don’t miss the turn to go off-trail)
Elevation gain: 1,923 feet 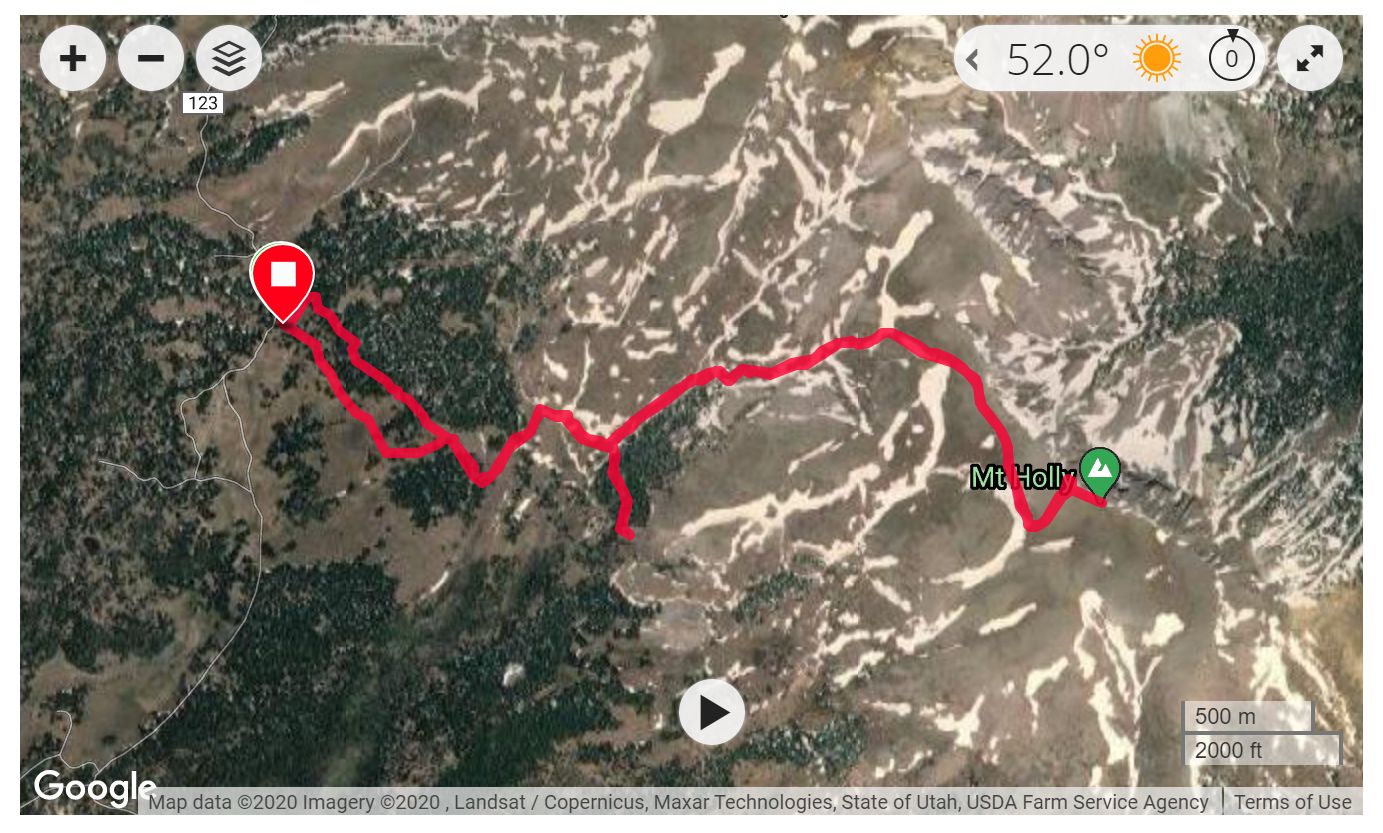 Mt. Holly’s loftier neighbor to the north, Delano Peak is the highest summit in the Tushars. Standing at 12,169 feet, it narrowly edges out the range’s two other 12,000-footers, Mt. Belknap and Mount Baldy.

There are a couple of ways to hike to Delano’s summit – via a ‘trailhead’ off Forest Road 123, or by way of the trail system at the Bullion Pasture Trailhead (#074). We opted for the former, as we hadn’t discovered any info about hiking from Bullion Pasture at the time we ventured out on the trail. That said, if we hiked this route again, we’d definitely choose Bullion Pasture as our starting point.3

While there is no formal trailhead for the summit route off Forest Road 123, there is a small sign displaying some of the national forest’s regulations, and the dirt path is easily identifiable. This starting point is about 0.7 miles north of the Skyline NRT Trailhead we used to access Mt. Holly. Be aware, however, that there’s no meaningful place to park here. The road is wide enough in one short section for maybe two cars to parallel park along the side without hindering vehicular traffic.

Beginning from the pull-off, the round trip to Delano’s summit was a quick 3.4 miles. Gaining 1,700 feet over the 1.7 miles to the summit, the trail is really pretty moderate. Depending on where you’re coming from, making the drive to hike only Delano from this side of the mountain may not be worth your while (it took us about an hour and half round-trip). However, pairing Delano with Mt. Holly makes for a nice day on the trail.

Unlike hiking Mt. Holly, the trail to the summit is quite clear with no route finding necessary. For nearly the entire hike, the path traverses open alpine meadows, offering stunning views of Mt. Belknap and Mt. Baldy to the northwest. Similar to Mt. Holly, Delano’s highpoint is marked with a large, green sign and mailbox with summit register. The views from the top were sweeping, and the colors somewhat reminiscent of our time in Colorado’s San Juans. As we looked east across the Marysvale Valley, we noticed a plume of smoke suddenly begin to billow in the distance. We initially worried yet another blaze had sparked in an already extreme fire season. However, as we drove home later that evening, we were relieved to find it was actually a planned burn along the slopes of Monroe Peak. 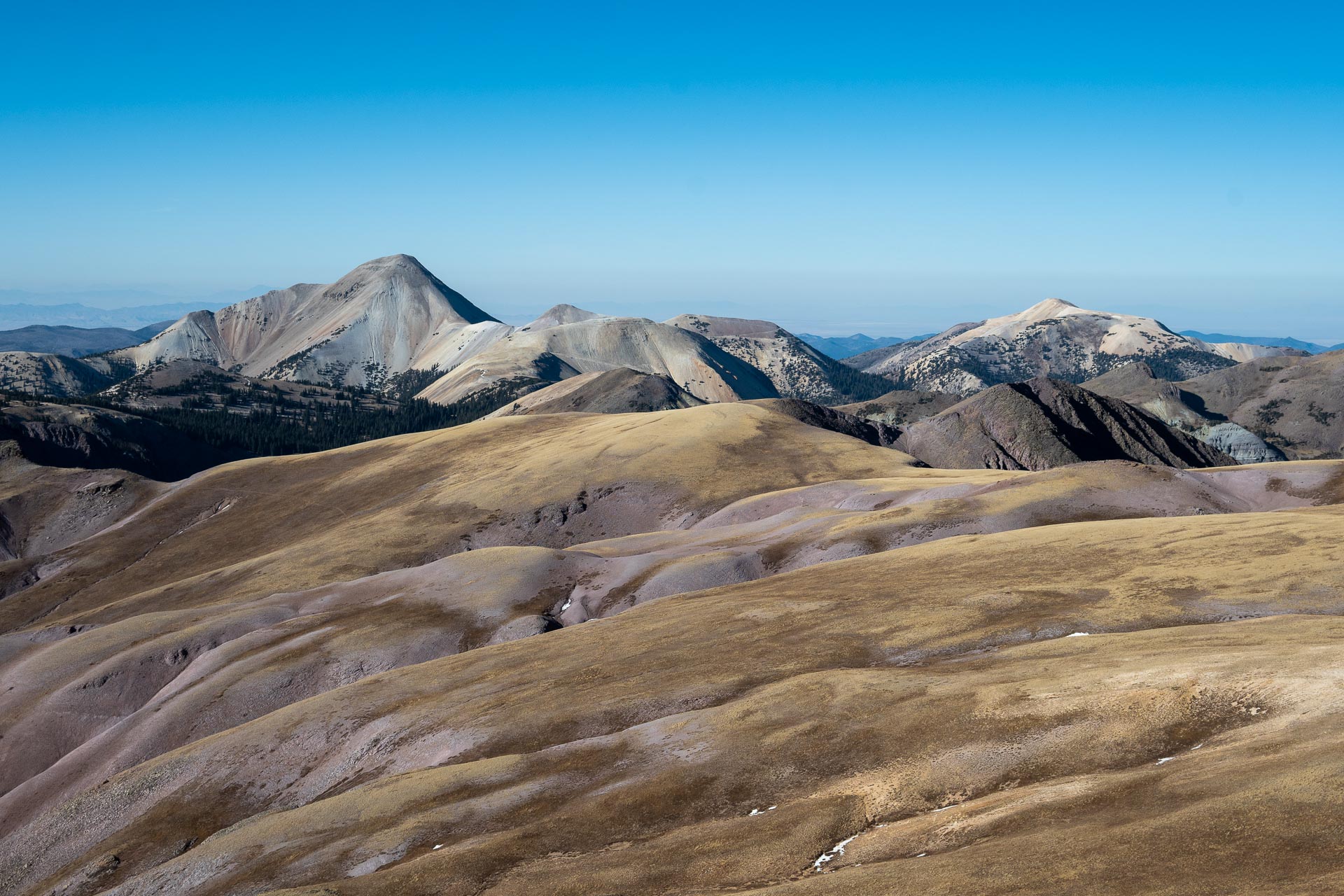 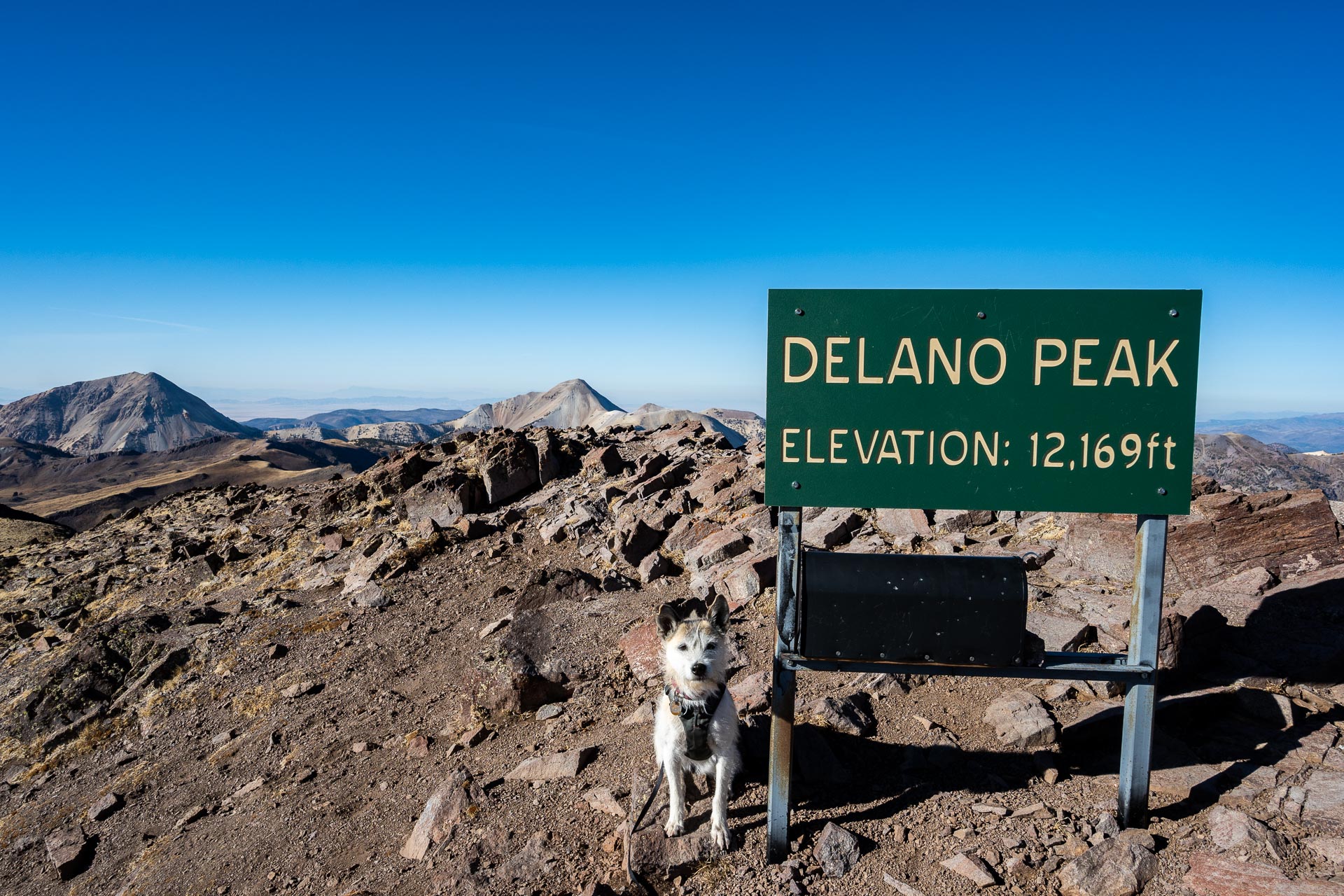 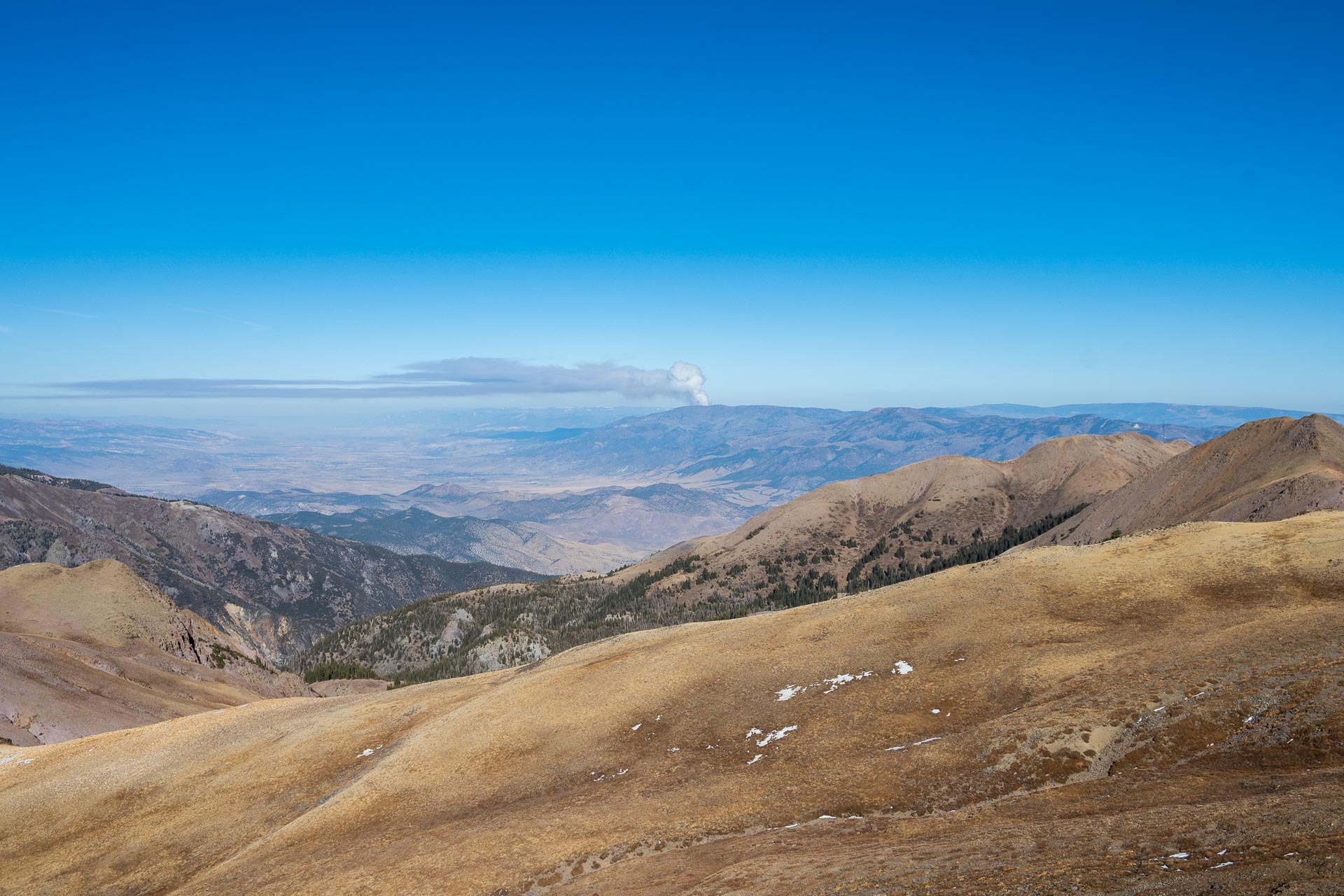 While we really enjoyed the scenery hiking Delano Peak, next time we’d definitely grab the summit via Bullion Pasture and The Pocket (described below).3 That route sounds a bit more scenic and substantial in terms of distance, and we wished we’d found some info about it sooner (there’s not a lot of detail online about this route). A few weeks later, we attempted to return and hike this alternate trail, but were ultimately thwarted by a snowstorm that dumped enough powder to put the shaded, upper portion of Forest Road 123 just out of reach for our Crosstrek.4 It was worth the try, though, and we ended up having a great time just bounding through the untouched snow with Sanchez at the Big John Flat CUA dispersed camping area. For us, it kind of seemed like any day in the Tushars was a good day. 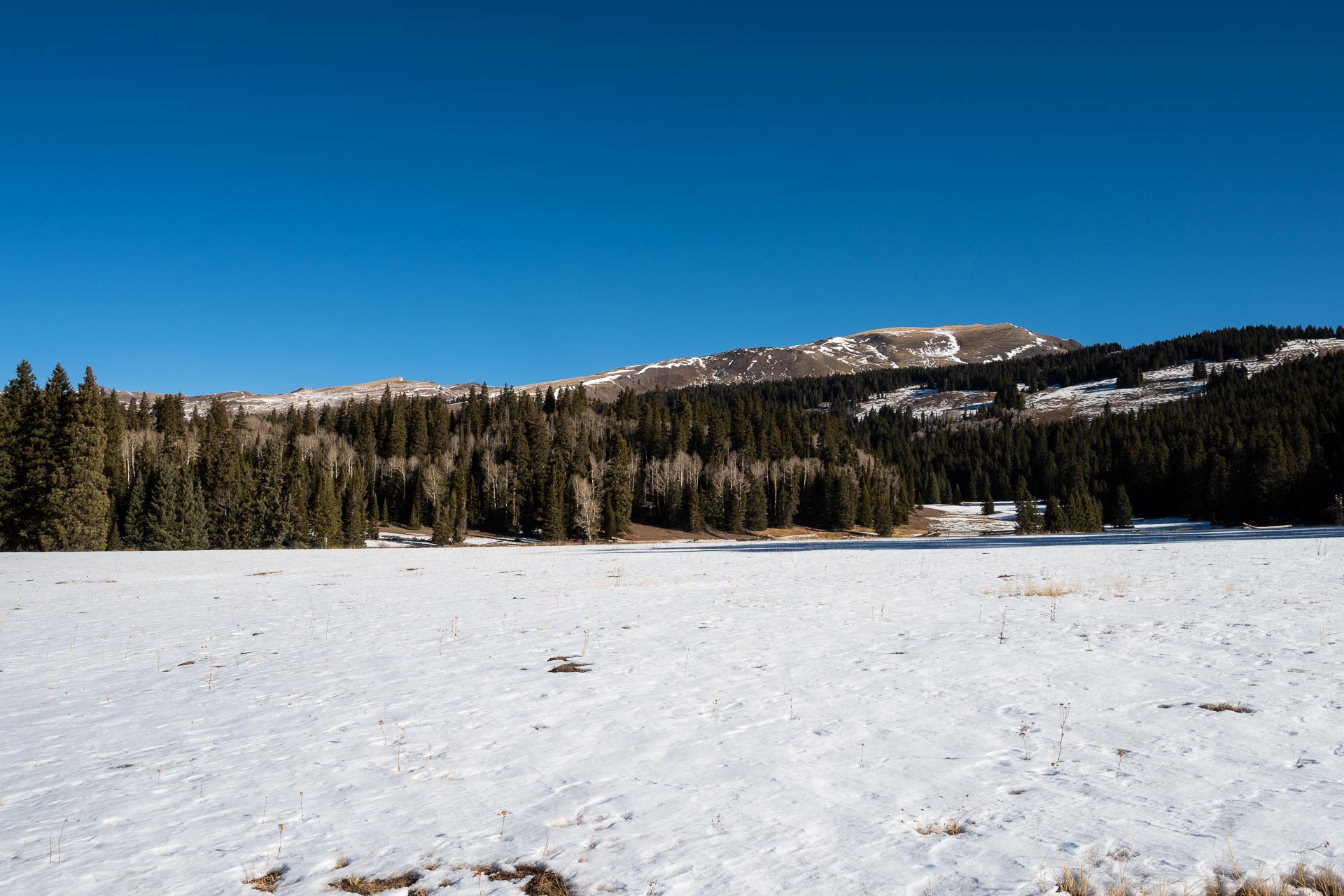 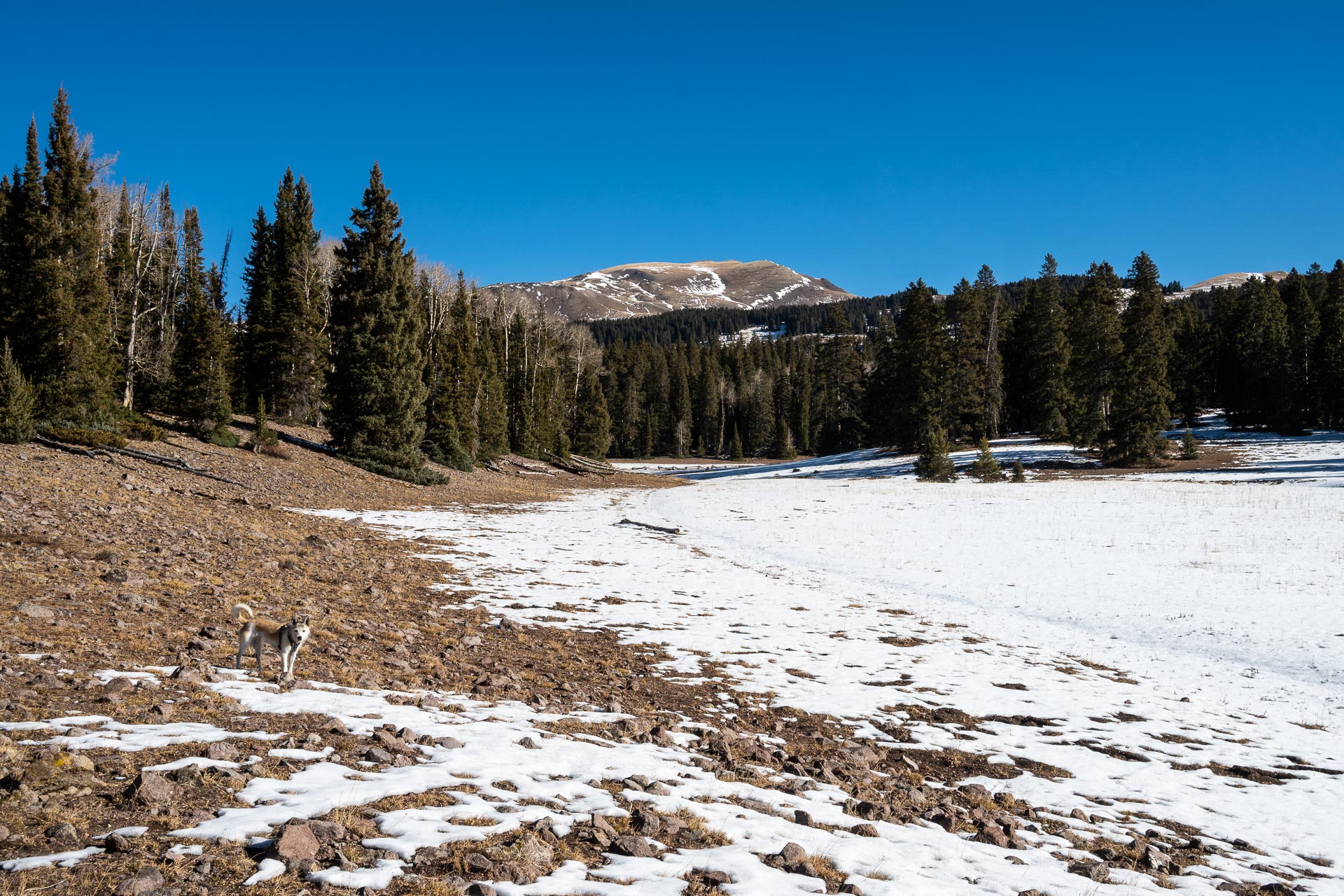 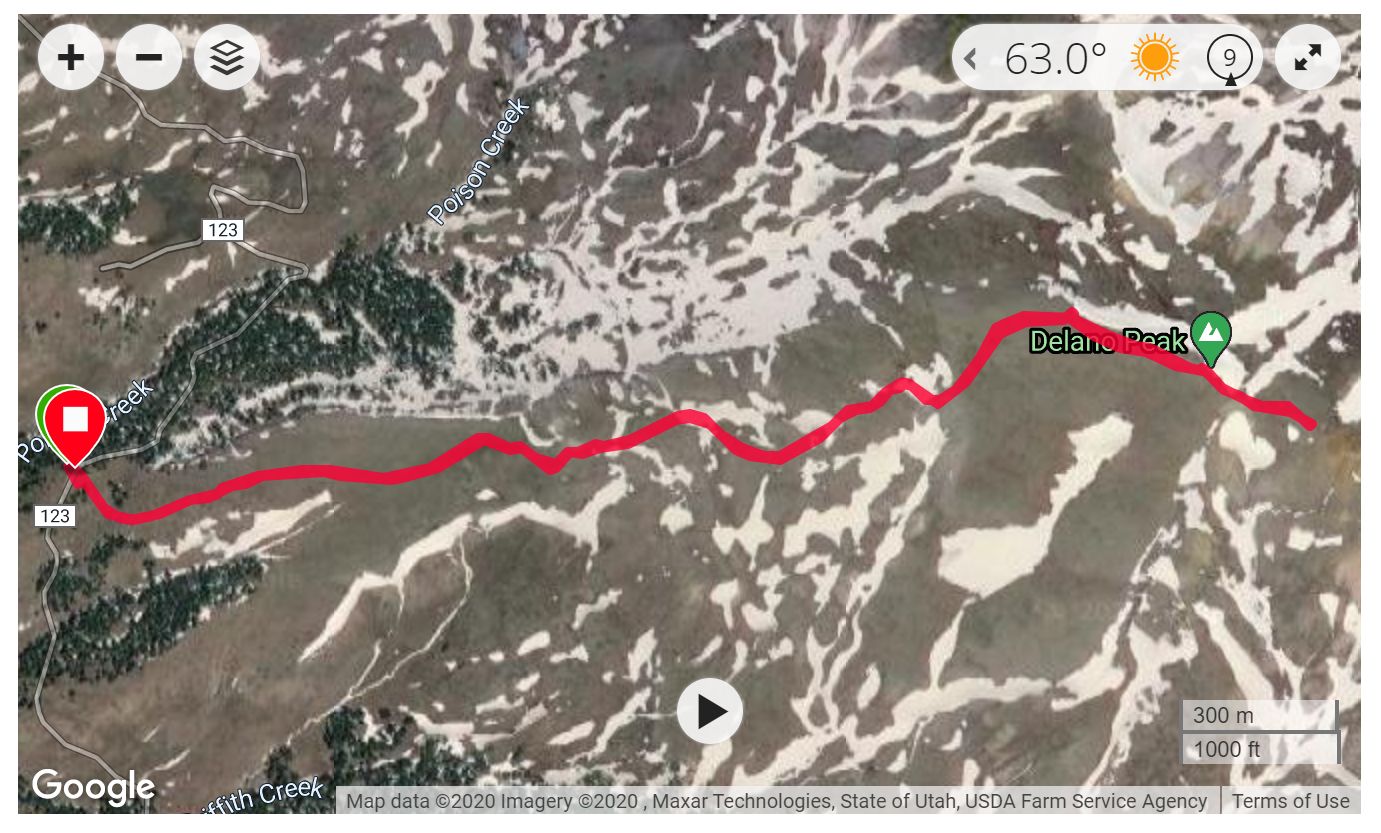 1,2The Skyline NRT is a 12-mile thru route within Fishlake National Forest. From the Big John Flat Trailhead on Forest Road 123, the NRT can be hiked either to the southeast (toward Mt. Holly and Big John Flat) or the northwest (toward Blue Lake and Shelly Baldy). We had hoped to return to hike the opposite portion of the trail to Blue Lake, but some late November snow hampered our efforts.

3Delano Peak can also be hiked via the Bullion Canyon Trail System. The trailhead is about 16 miles west of Marysvale via Forest Roads 113 and 123. Alternatively, the trailhead can be reached from the Beaver side of the mountains via UT-153 and Forest Road 123. From Beaver, it’s about 26 miles, 9 miles of which is up Forest Road 123.

Four trails make up the trail network at Bullion Canyon – the Bullion Canyon Trail (#074), South Fork Trail (#072), Pocket Trail (#216), and Delano Peak Trail (#224). The trails can be combined to form a loop that is ~10–12 miles including Delano’s summit. Highlights include an old miner’s cabin and colorful cliffs of ‘The Pocket.’ For more information, we found this incredibly detailed hike report as well as this resource.

4There is a winter gate on Forest Road 123 that closes the upper portion of the road seasonally to motor vehicle traffic. If it’s early or late in the season, be sure to call the Beaver Ranger Station before visiting to get current information on the road’s status and conditions. It’s important to note that Forest Road 123 is a fairly rugged dirt road, so you’ll want to be sure you have a high-clearance, four-wheel drive vehicle to travel this route. If you do have a suitable vehicle, the drive up here is absolutely gorgeous.