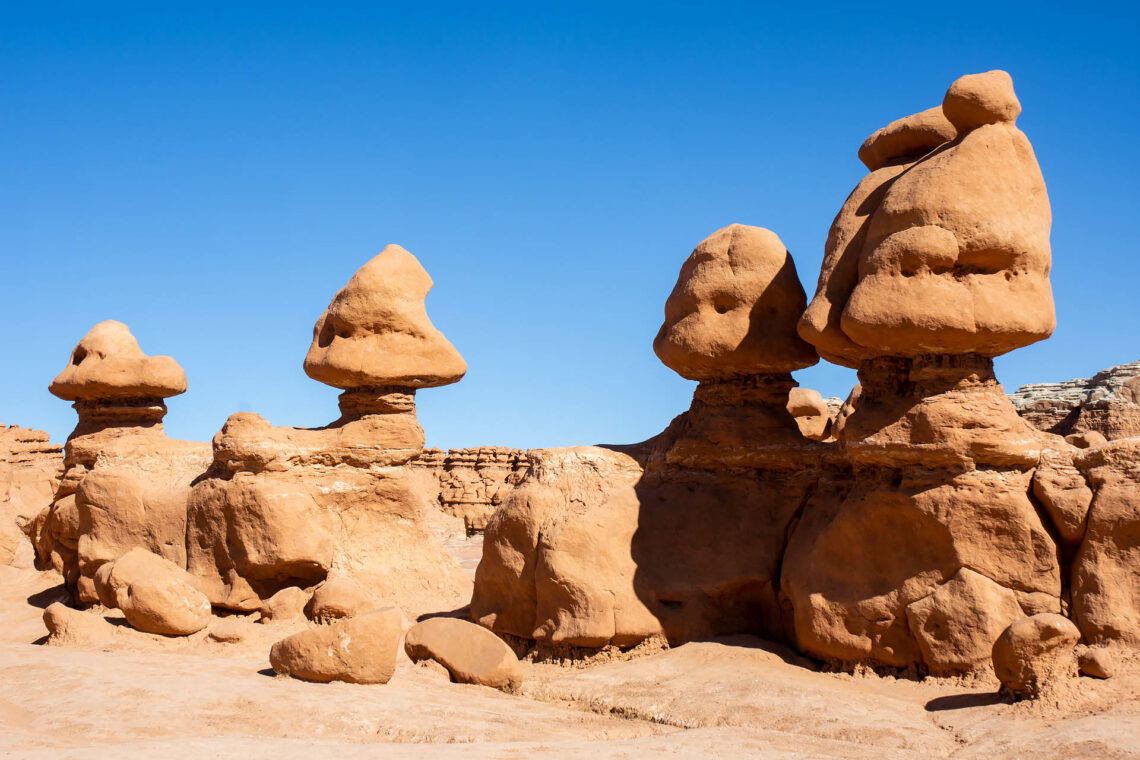 Situated in the vast badlands between Utah’s Capitol Reef and Canyonlands National Parks is a peculiar world. It’s a world that began forming during the Jurassic period, some 170 million years ago. A world where daytime summer temperatures soar to over 100°F and winter evenings plunge below freezing. A barren and rugged world where curious goblins have danced surreptitiously in the desert for millions of years.

Goblin Valley State Park sits at the southern edge of the San Rafael Swell – a massive bulge of stratified rock in the Earth’s crust. The swell formed when sandstone and limestone were forced upward during the Laramide Orogeny, a period of tectonic movement between 40 and 70 million years ago. This phase of mountain building in the western U.S. also saw the formation of the Uinta, Wind River, and Rocky Mountains. Today, the San Rafael Swell is a tangle of canyons, mesas, and buttes that stretches across some 1,800 square miles.

A comparatively small state park1, Goblin Valley encompasses 3,600 acres just north of the tiny town of Hanksville. There are only about eight miles of trails, ranging from one- to three-miles each, although multiple routes can be joined together to extend your hike. Additionally, the Valley of the Goblins is expansive. It’s actually three valleys covering three square miles, and you can wander freely here to explore the thousands of unique sandstone formations2,3 that pepper the basin. Unlike a lot of parks, the Wild Horse Trail System also offers mountain bikers a chance to explore Goblin Valley. Opened in 2015, the network includes seven miles of singletrack near Wild Horse Butte. These trails won’t take you in amongst the hoodoos, though, so you’ll have to hit the walking trails if you’re keen to check out the goblins. 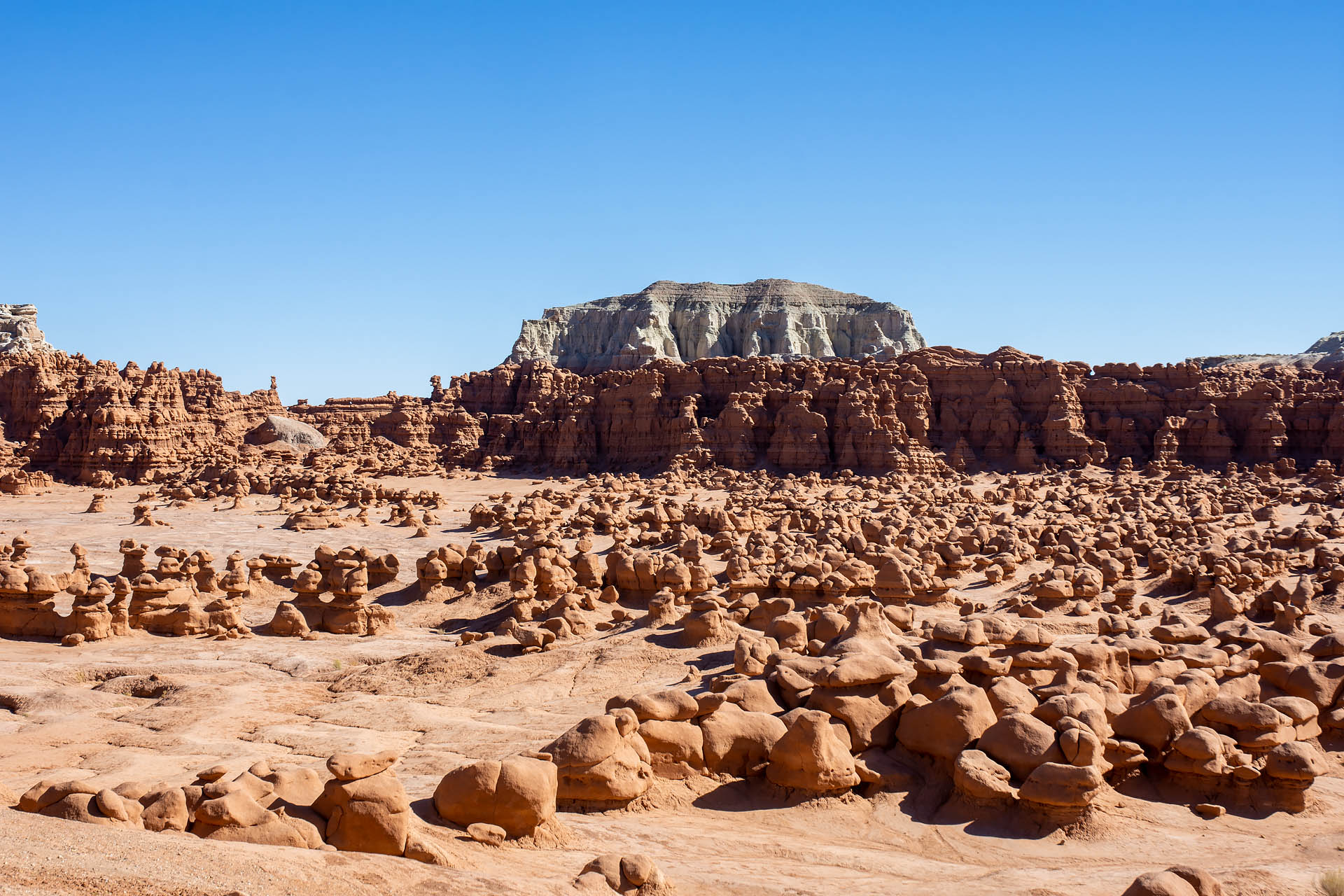 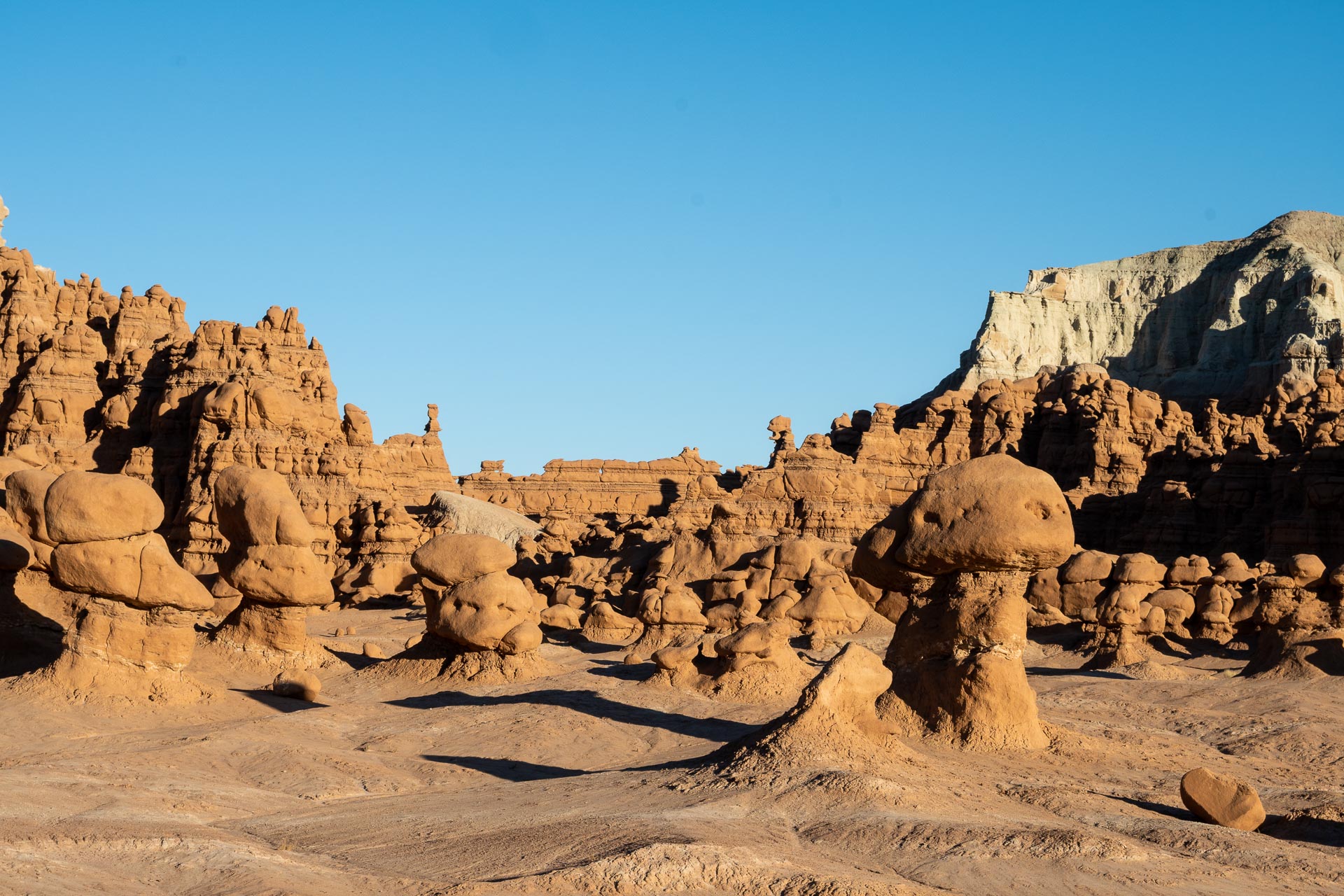 Fittingly, we decided to visit Goblin Valley on Halloween. The weather was crisp and cool, the summer tourists were now ghosts of the past, and it felt like a better way to feel festive during a pandemic than handing out candy to groups of kids from a communal bowl. Better still, it was a gorgeous Saturday and there were surprisingly few people in the park. We ultimately decided to link up three trails (Entrada Canyon > Carmel Canyon > Molly’s Castle Overlook) to create a six-mile out-and-back that would also allow us to explore the Valley of the Goblins.

Beginning on the Entrada Canyon trail, we followed a narrow drainage for about 0.8 miles until we reached the observation point overlooking the Valley of the Goblins. Sanchez got her first taste of the desert landscape along this trail, and she was undeniably intrigued by the wild assortment of new smells. Always eager to jump up onto something for a view, she had a blast clambering up and down the rock. She even found herself the perfect vantage point for a peek at the Three Sisters. 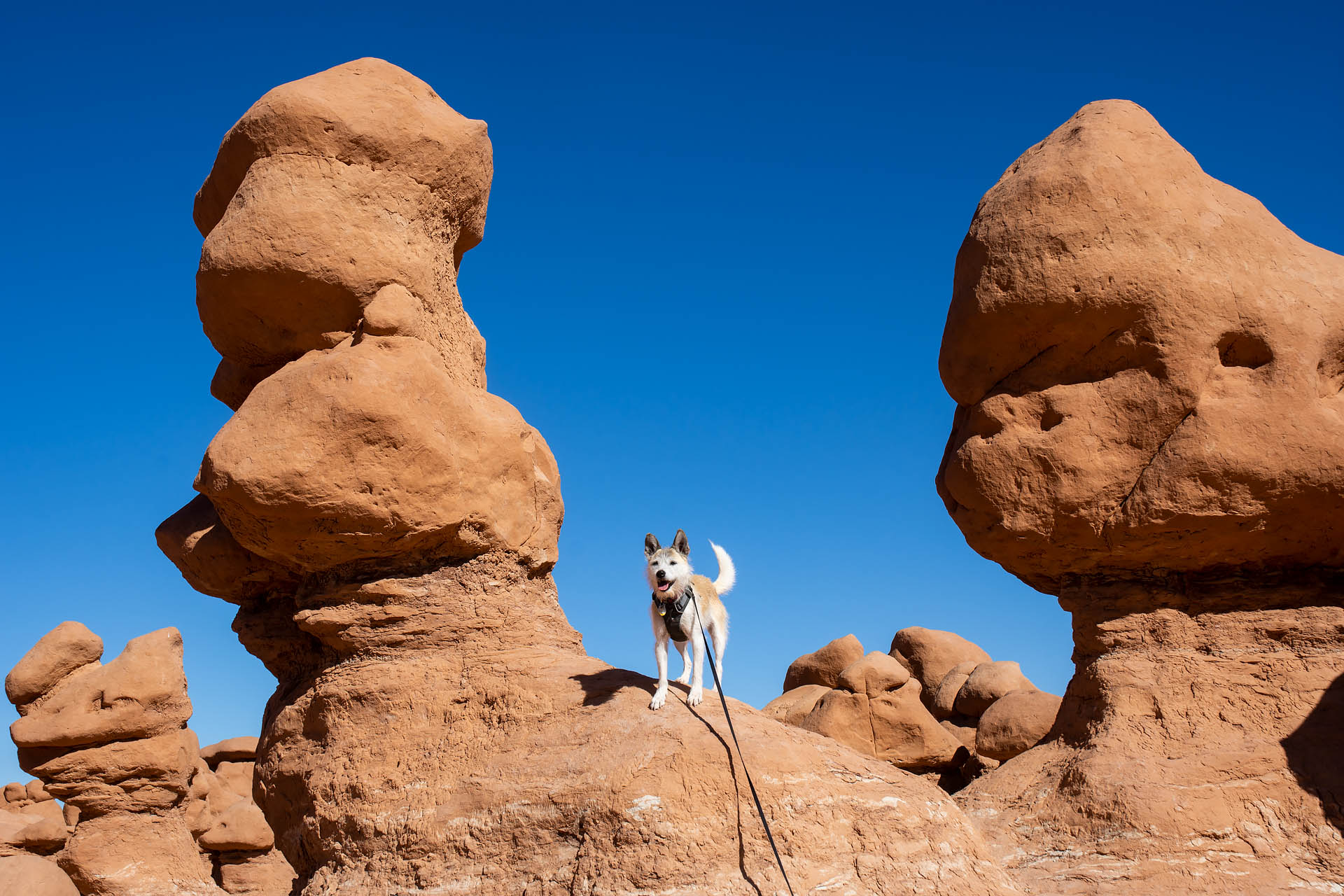 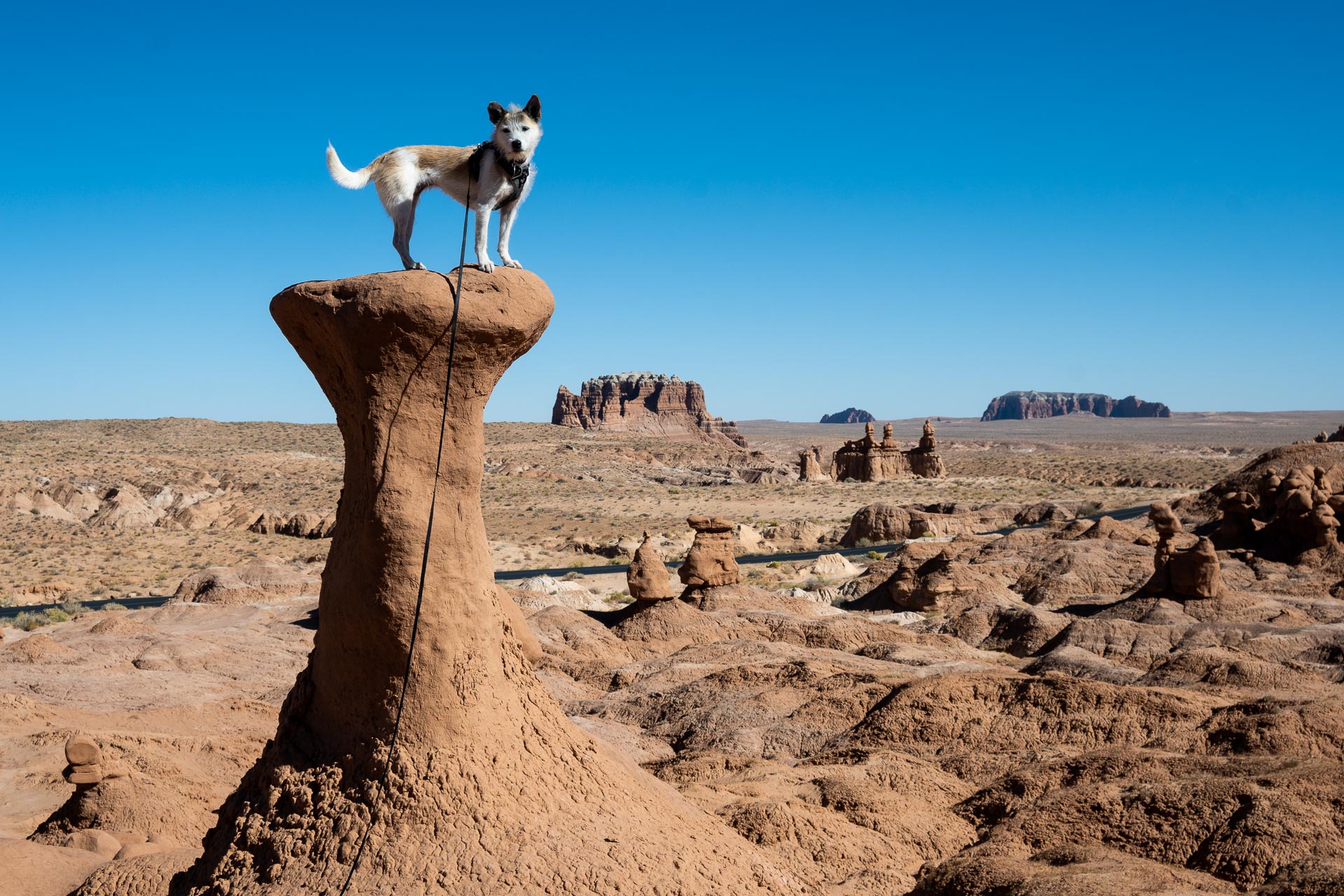 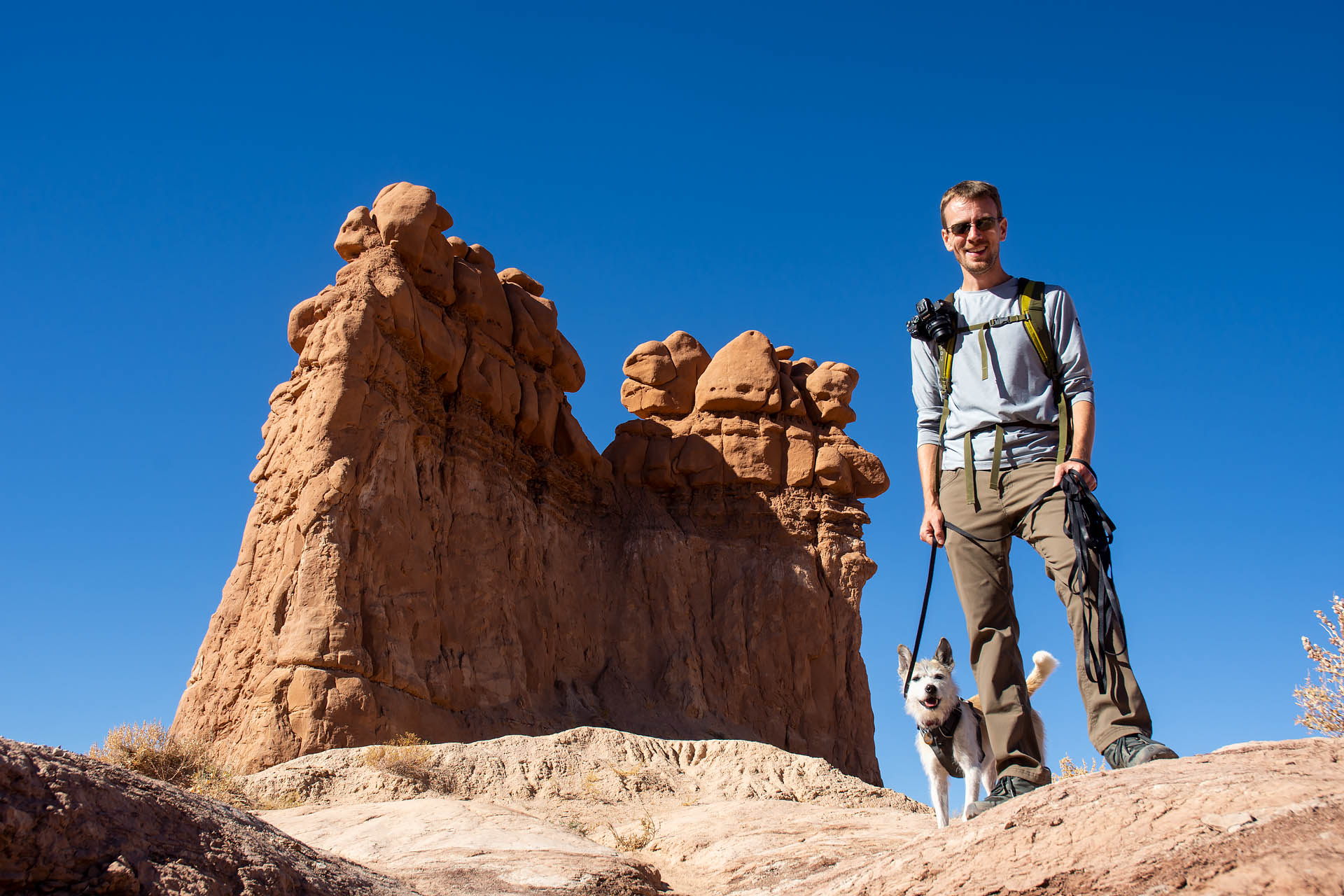 When we reached the Valley of the Goblins, we were taken aback by the density of the gorge’s rocky residents. The expansive basin was littered with a labyrinth of gnarled sandstone sculptures that have been carved over the course of millions of years. Known as hoodoos in geological lingo, the goblins’ story began around 170 million years ago during the middle Jurassic period. During this time, the region was covered by a vast, inland sea. Along the ocean’s primordial shores, sand mixed with silt and clay and these rock deposits were buried, eventually forming a thick layer of sandstone. After millions of years of weathering, this interbedded Entrada sandstone was eventually exposed. While the rock itself dates to around 170 million years, the hoodoos that stand today are thought to be the remnants of erosion that began just 25 million years ago.

From the first valley, we dipped down to the Carmel Canyon Loop and followed the southern half of the trail toward the east. Carmel Canyon was surprisingly striking, banded with the colorful striations of the Curtis, Summerville, and Morrison Formations atop the red Entrada Sandstone cliffs. The path snaked along the floor of the small canyon, and views of Molly’s Castle and Gilson Butte quickly came into view. We continued along the well-marked trail for about a mile to its junction with Molly’s Castle Overlook Trail. We turned onto this trail, heading east and south for about another mile until we reached the bottom of a small knoll. After zigzagging a hundred feet or so up the hill, we had arrived the mouth of the Goblin’s Lair (the Chamber of the Basilisk). 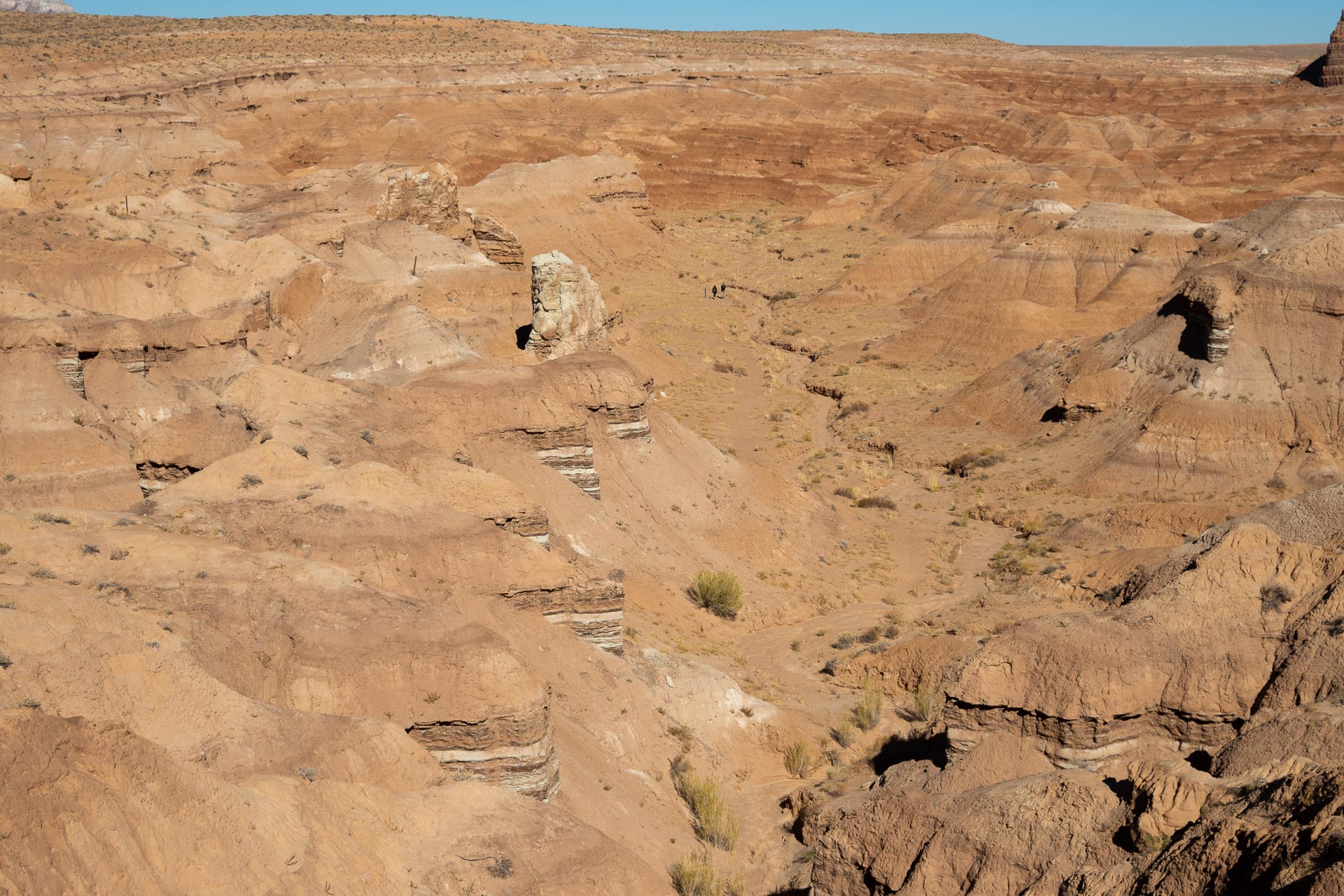 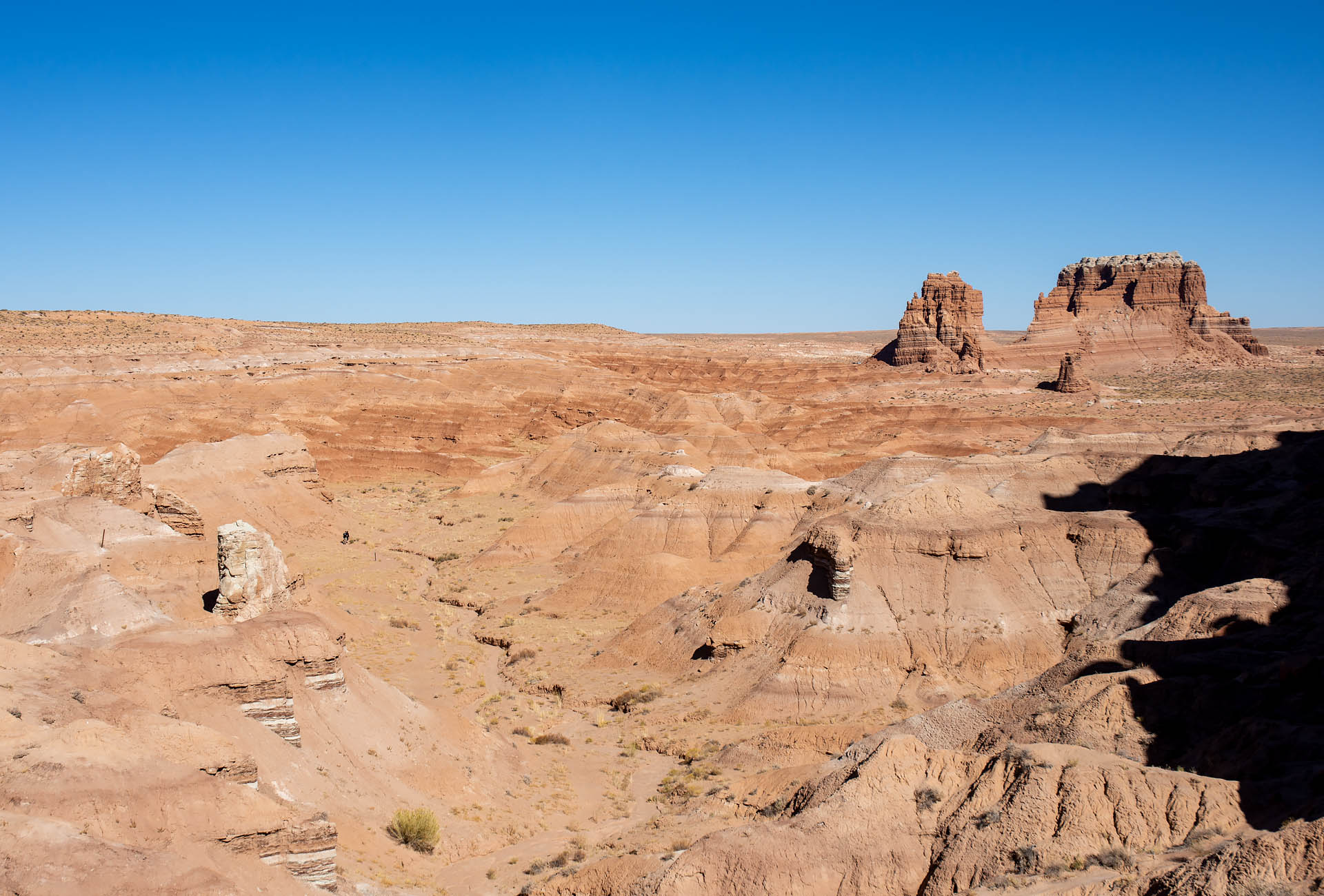 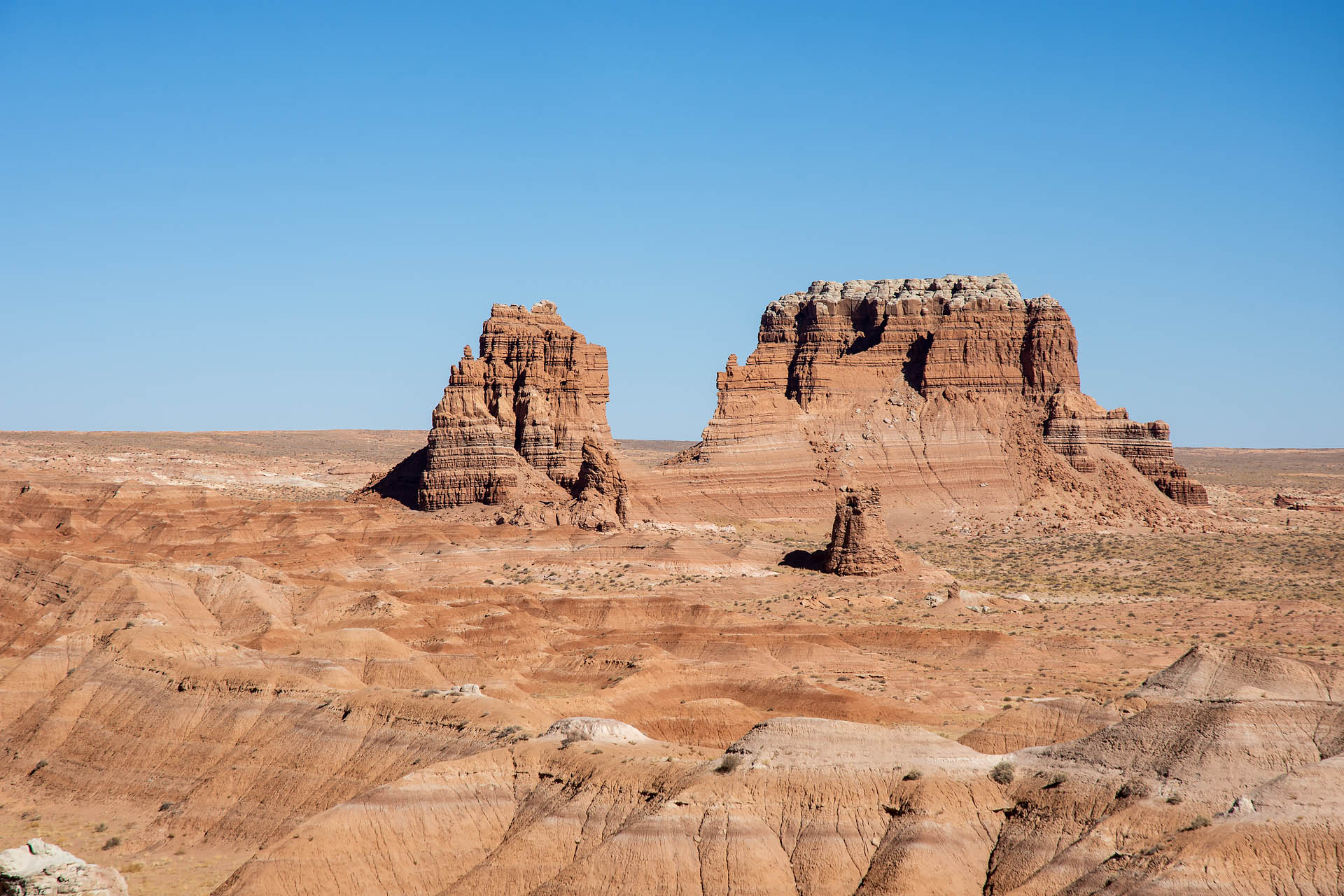 To get down into the chamber, you’ve got to do some light bouldering down an 80-foot rockfall. We weren’t sure how Sanchez would do descending down some of the larger rocks into the dark cavity, but she took it like a champ. Sometimes it’s almost hard to remember the timid little mutt who, for months after coming to the U.S., was too intimidated to walk a one-mile loop through our quiet Cary neighborhood. After some easy scrambling, we reached the floor of the ‘cave’ (it’s technically a slot canyon rather than a true cave). The Goblin’s Lair is fairly small, so we felt especially fortunate to have the entire cavern to ourselves.4 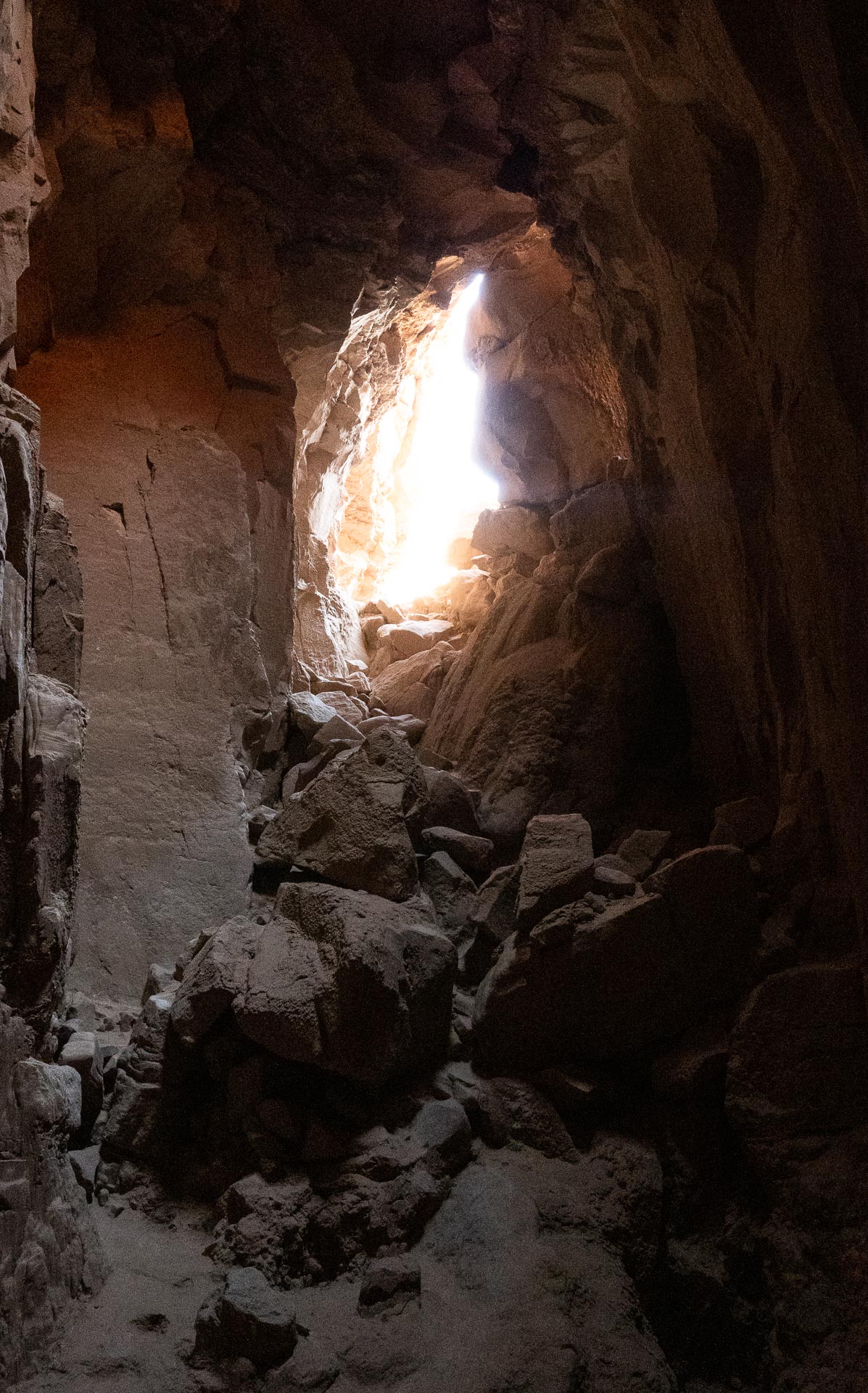 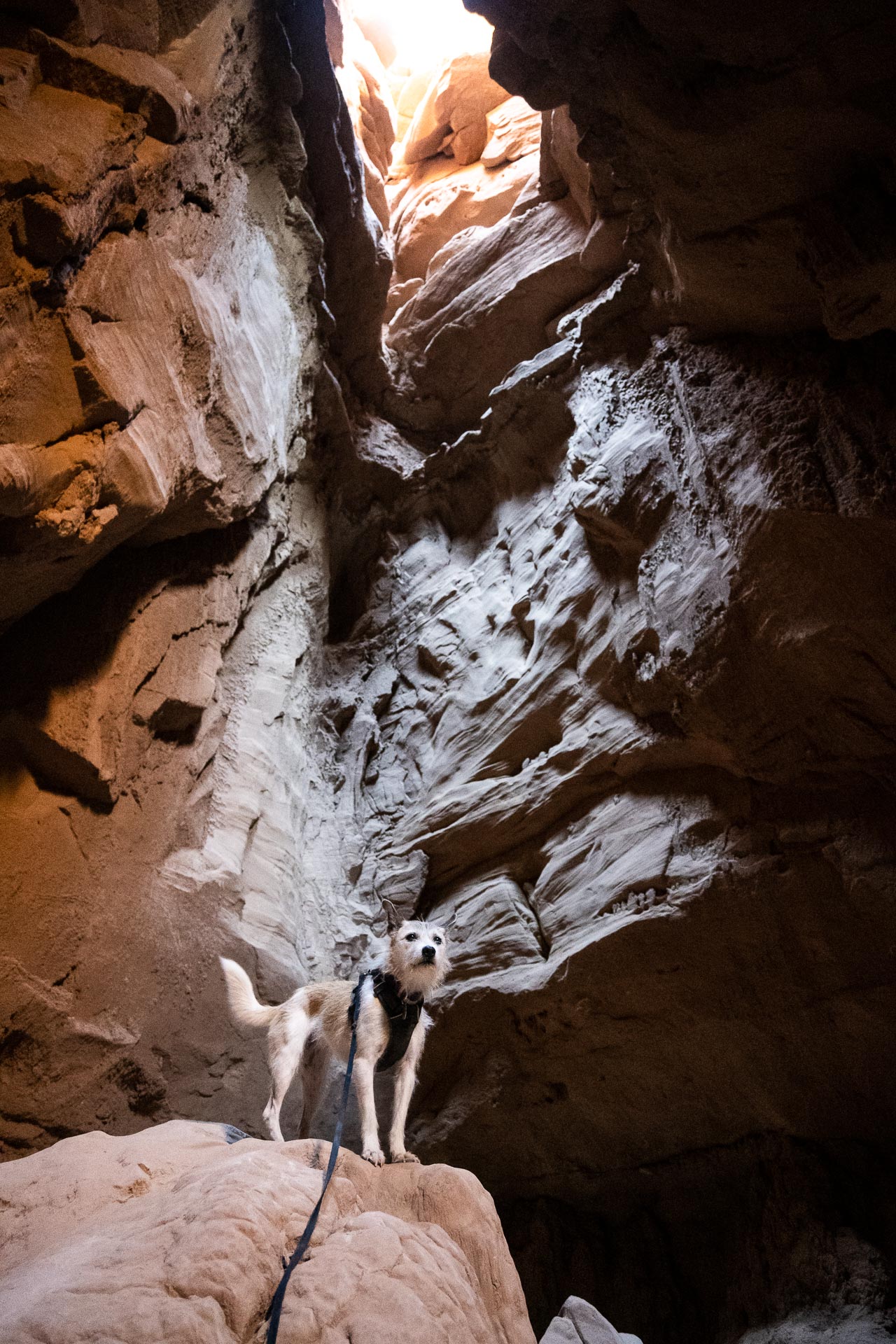 After climbing back out of the Goblin’s Lair, we quickly checked out the nearby Goblinette’s Lair (not nearly as impressive), before heading back to Carmel Canyon. Following the northern half of the loop this time, we made a quick detour out of the canyon to see the Three Sisters, the park’s most recognizable landmark. From this part of the trail, we were also afforded a lovely view looking northwest to Wild Horse Butte. We then climbed back down to the trail and, after Sanchez squeezed her way though a couple narrow sections of the canyon, ultimately returned to the Valley of the Goblins. 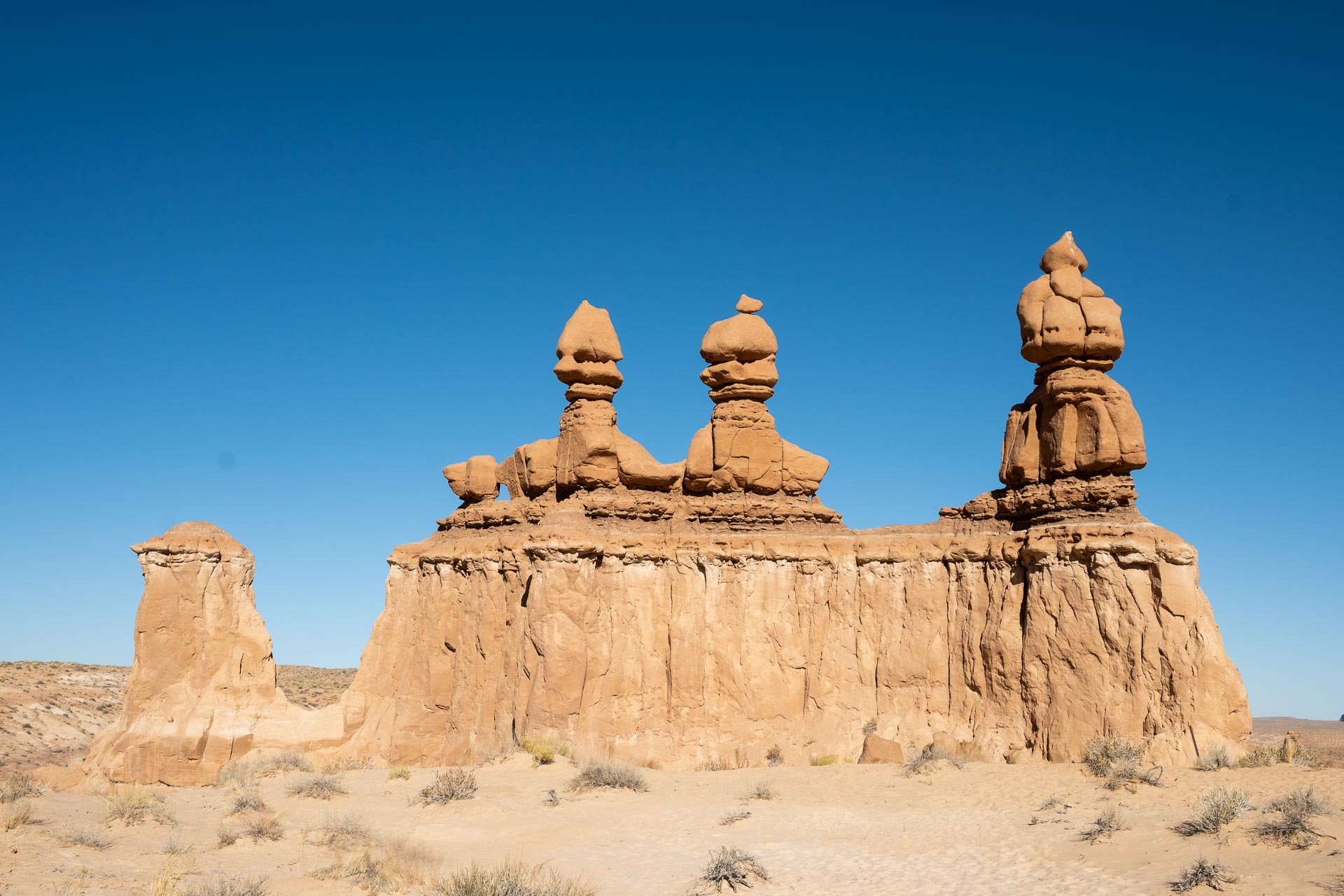 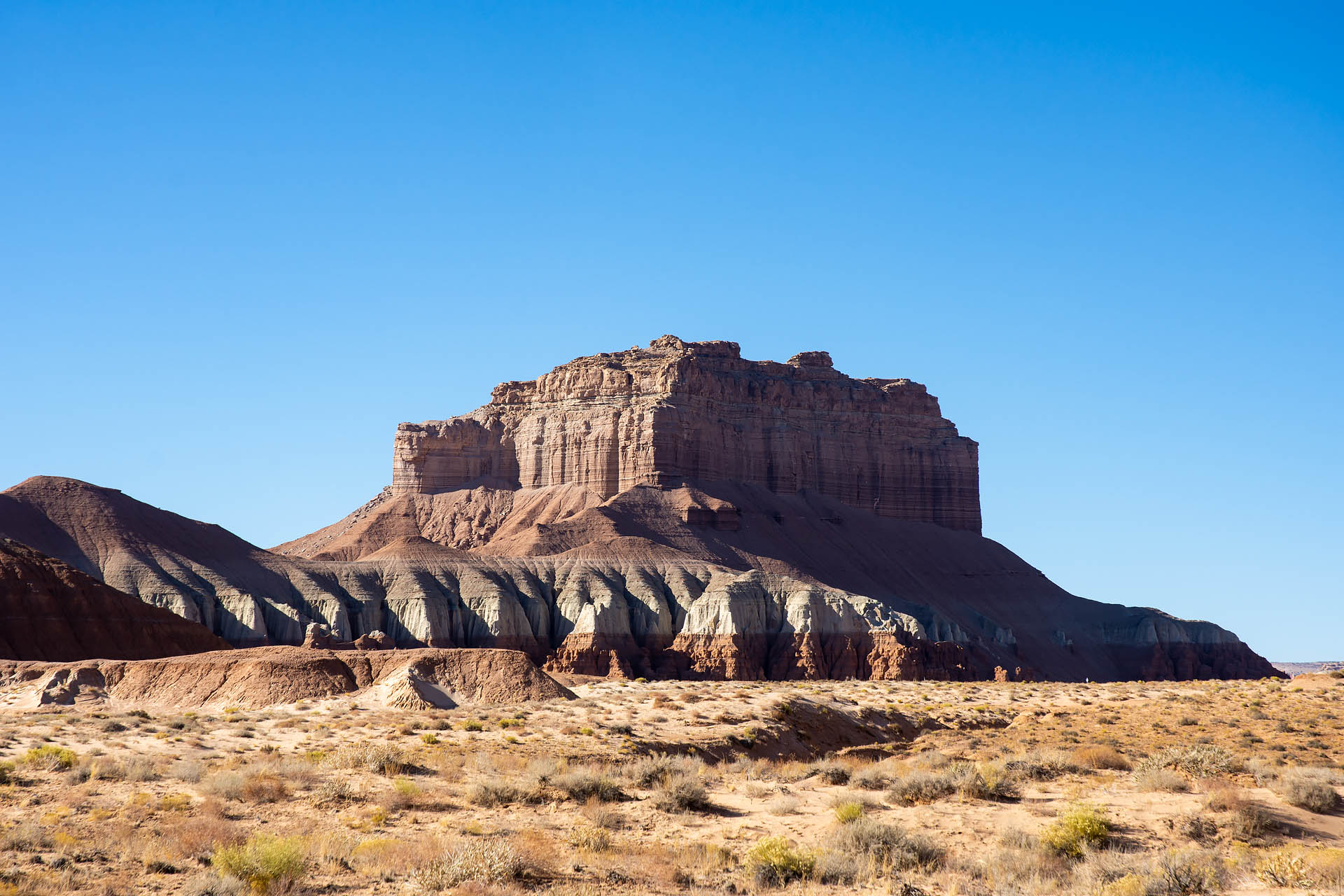 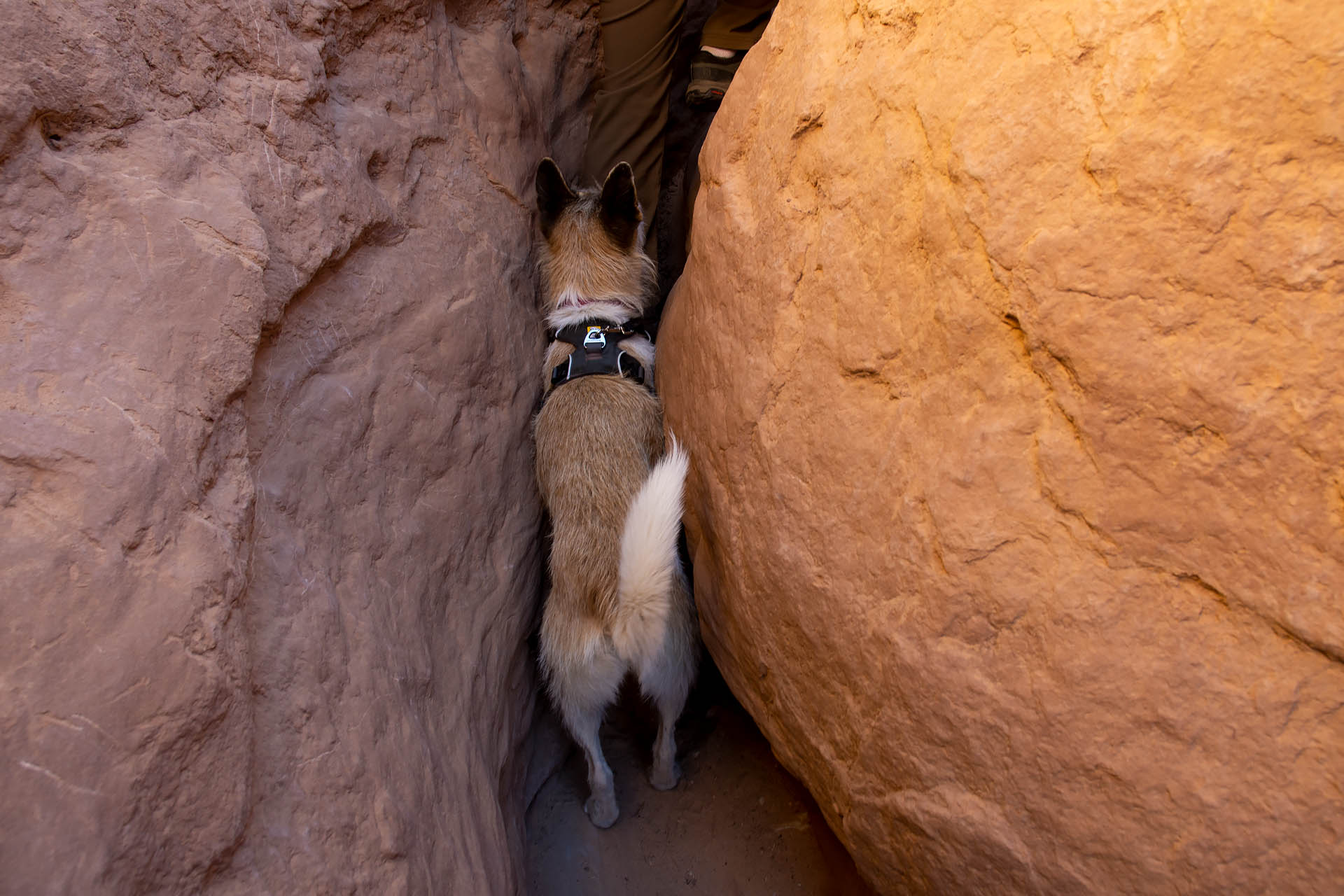 With the sun sinking quite low in the sky, we took some time to wander amongst the vast expanse of whimsical formations. The goblins were now awash in a warm, orange glow, their shadowy silhouettes dancing across the valley in the setting sun. The late afternoon air was quiet, and the barren landscape was almost otherworldly. 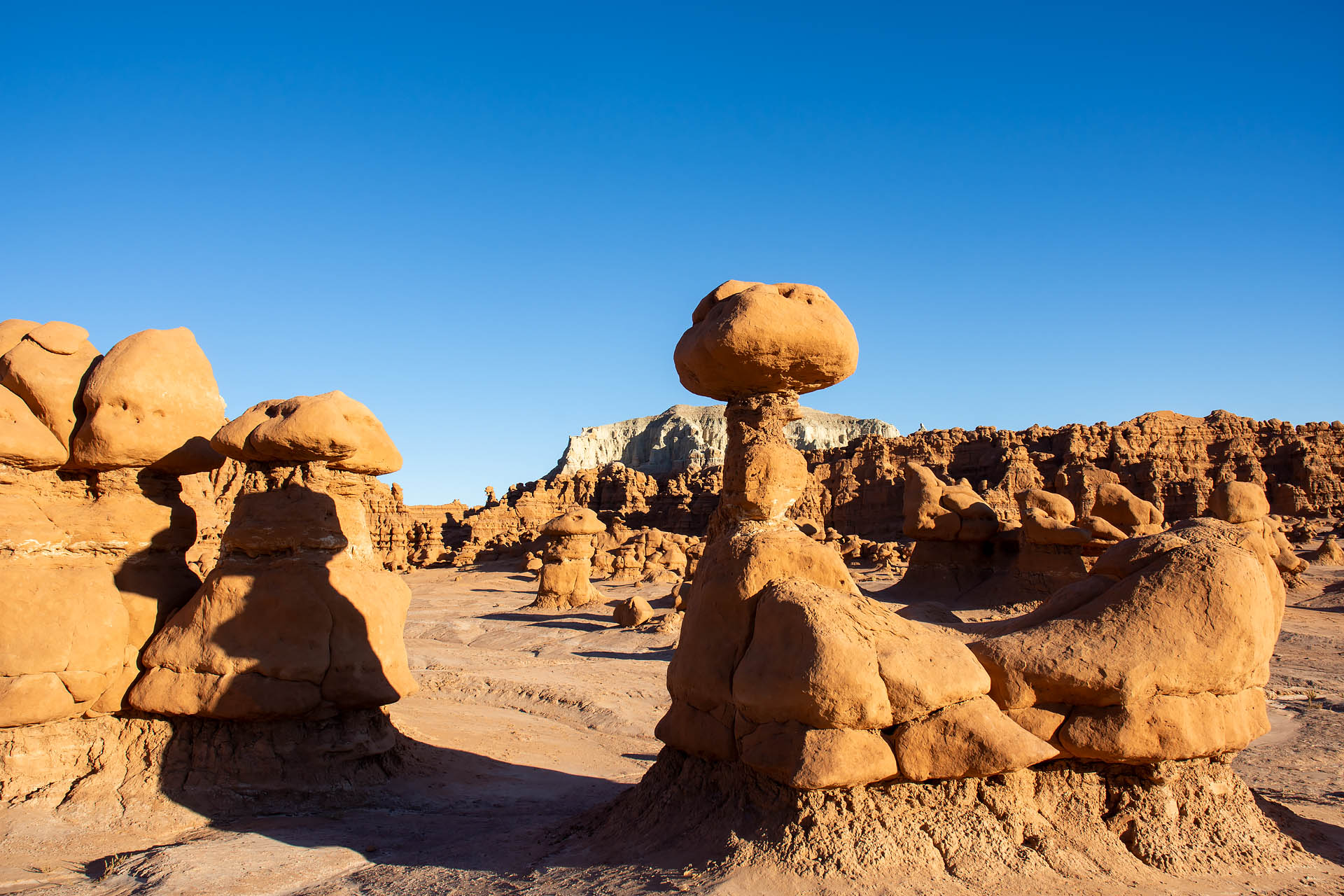 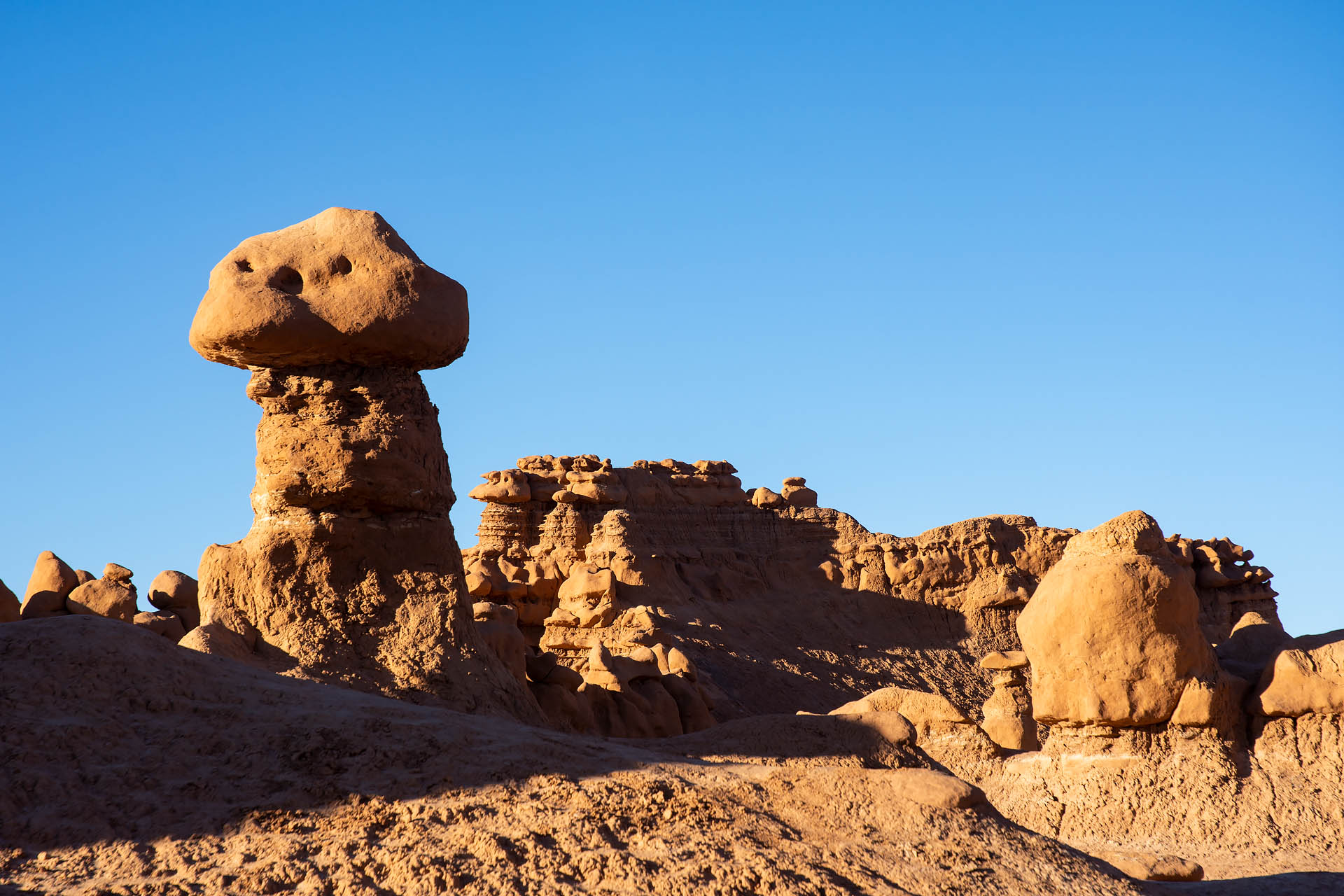 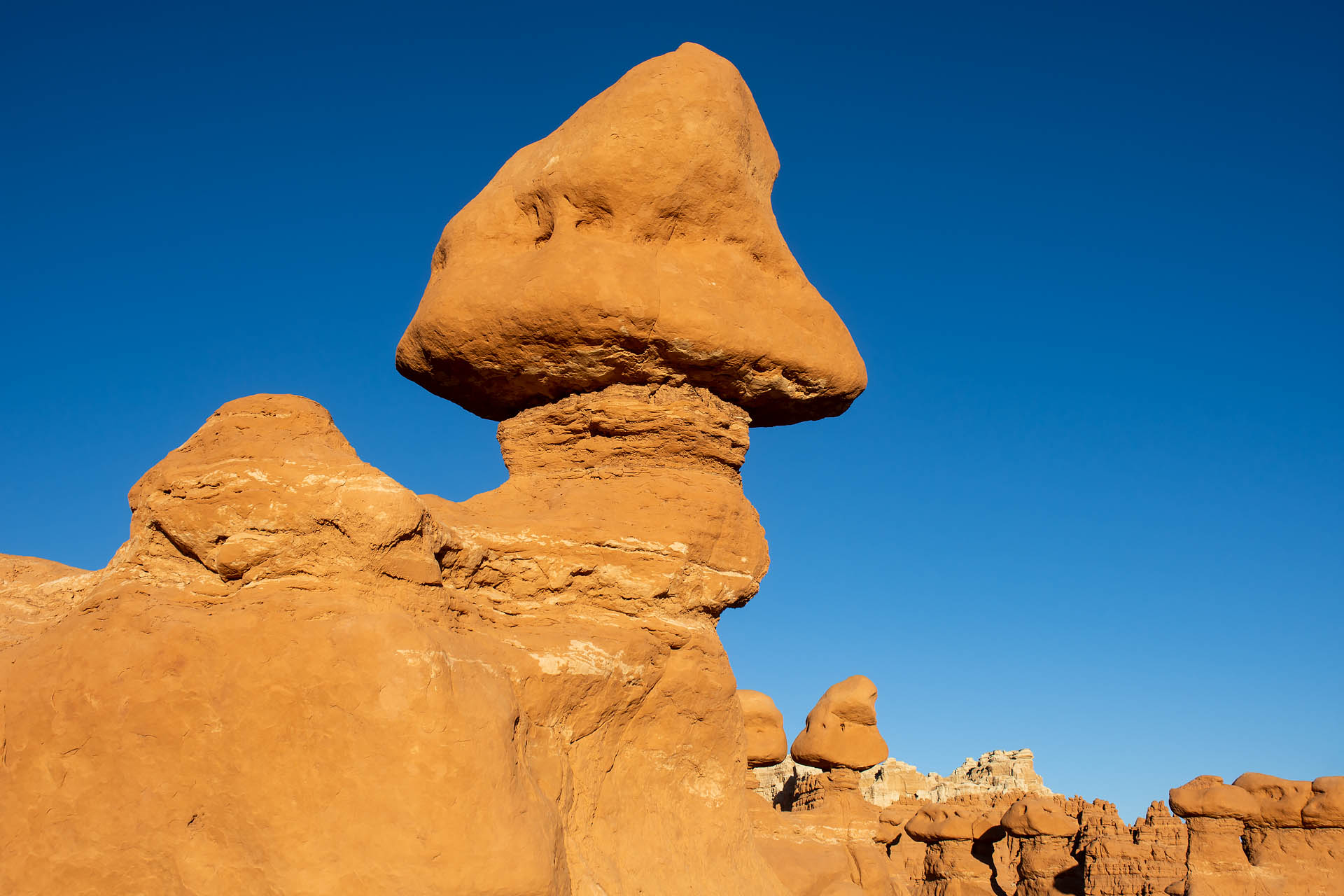 If you find yourself exploring the more well-known national parks in the area (Capitol Reef, Canyonlands), you may want to reserve a day to visit Goblin Valley. With its thousands of mushroom-capped hoodoos, you won’t find another place quite like it. Additionally, if you’re traveling with a dog, it’s a great place to get your furry friend out on the trail. Perhaps the biggest perk, though, is that the park sees significantly less traffic than its more celebrated neighbors – especially in the off-season. While the park may no longer be a truly hidden gem, it’s still a beautiful place where you can find a bit of solitude amongst the goblins. 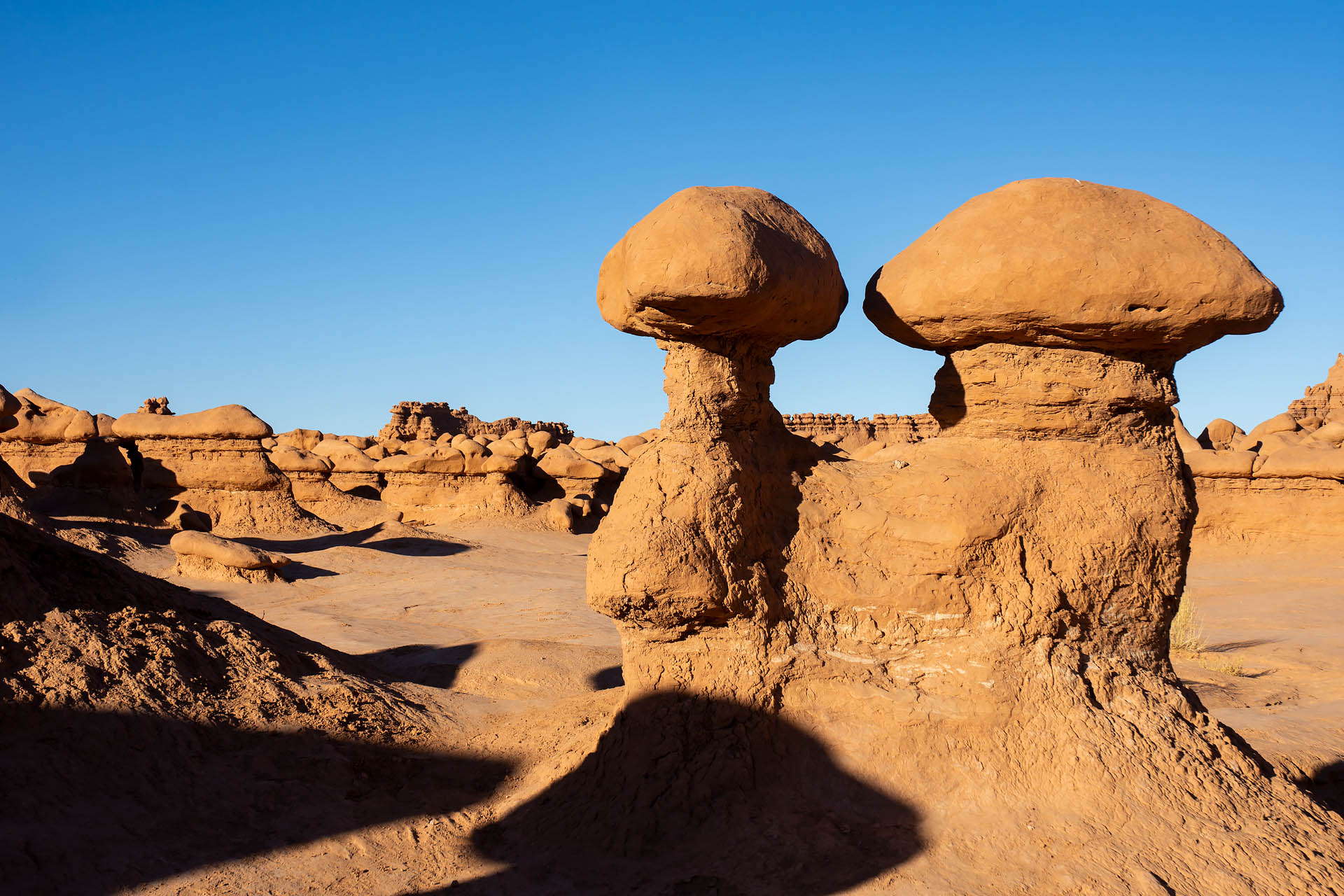 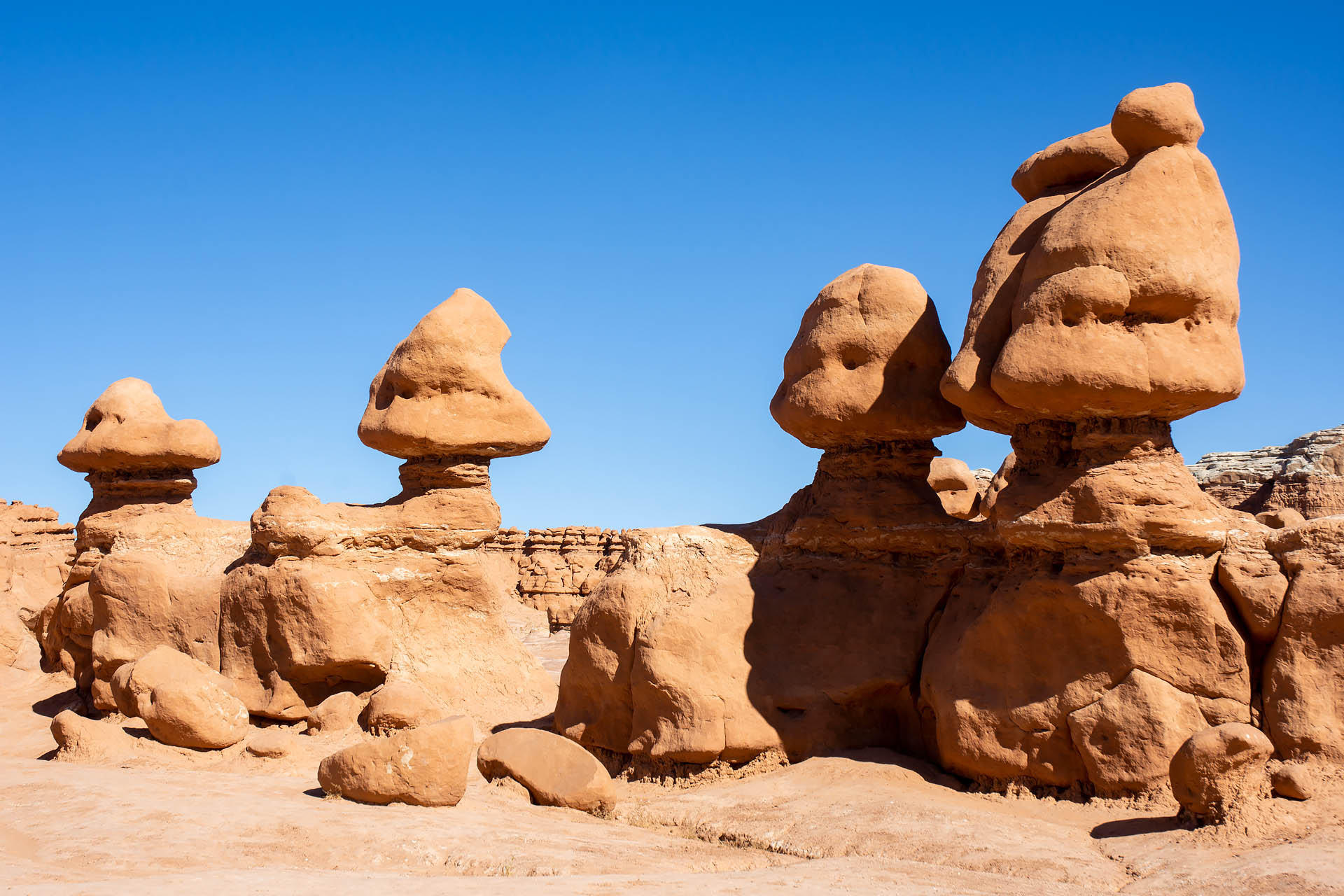 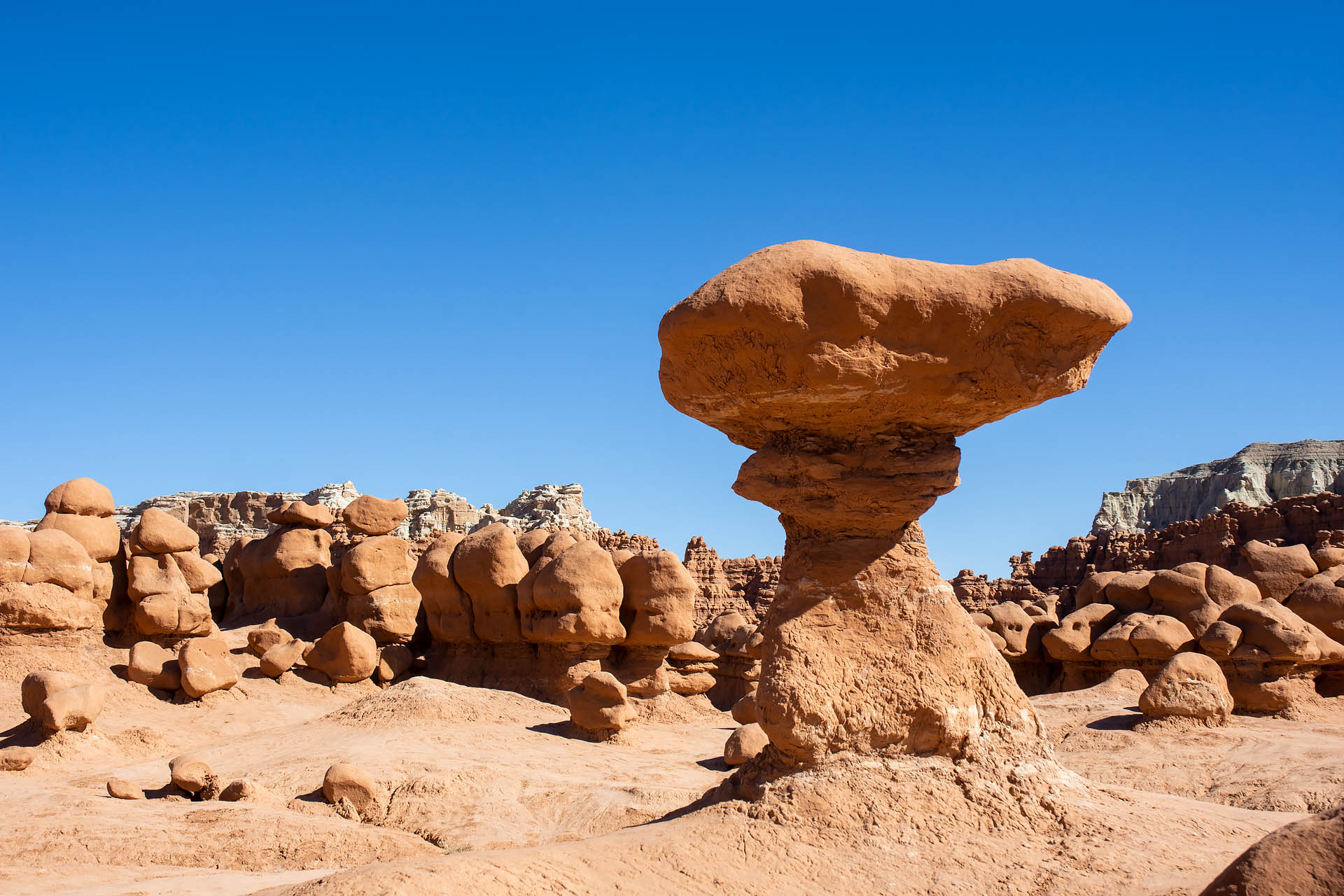 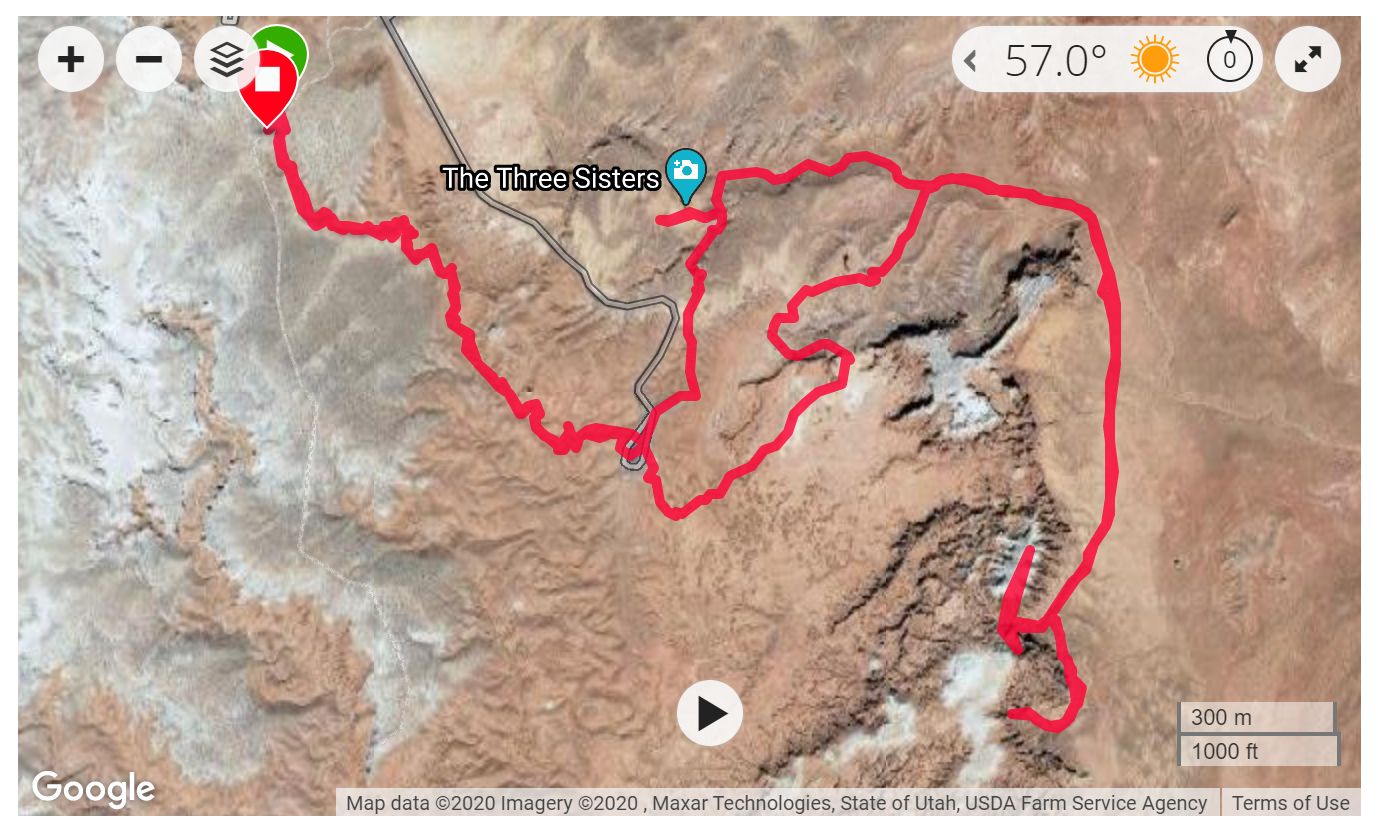 1Entrance to Goblin Valley is $20 per passenger vehicle, or $10 for motorcycles, bicycles, and pedestrians. The fee is valid for two days (day use only). If you’ll be staying in Utah for an extended period and plan to visit a number of state parks, you may want to consider purchasing an annual pass  for $100. The entrance fees vary quite a bit from park to park, so you’ll need to check each park’s fee to determine which option would be the best value.

2Summer temps can regularly exceed 100°F and there is virtually no shade at the park. Take this into consideration if you plan to visit during the hotter months, especially if you’re traveling with a dog. At the very least, you’ll need more water than you likely anticipate.

3While the park allows you to wander freely through the Valleys of the Goblins, please take care to not climb on or disturb the more fragile or delicately-balanced hoodoos. The sandstone sculptures have endured millions of years of weathering, and don’t need to be destroyed by stupid people doing stupid shit.

4If you’ve got the equipment and experience, you can also rappel the one hundred feet down into the lair, though you have to grab a permit ($2) from the park office.