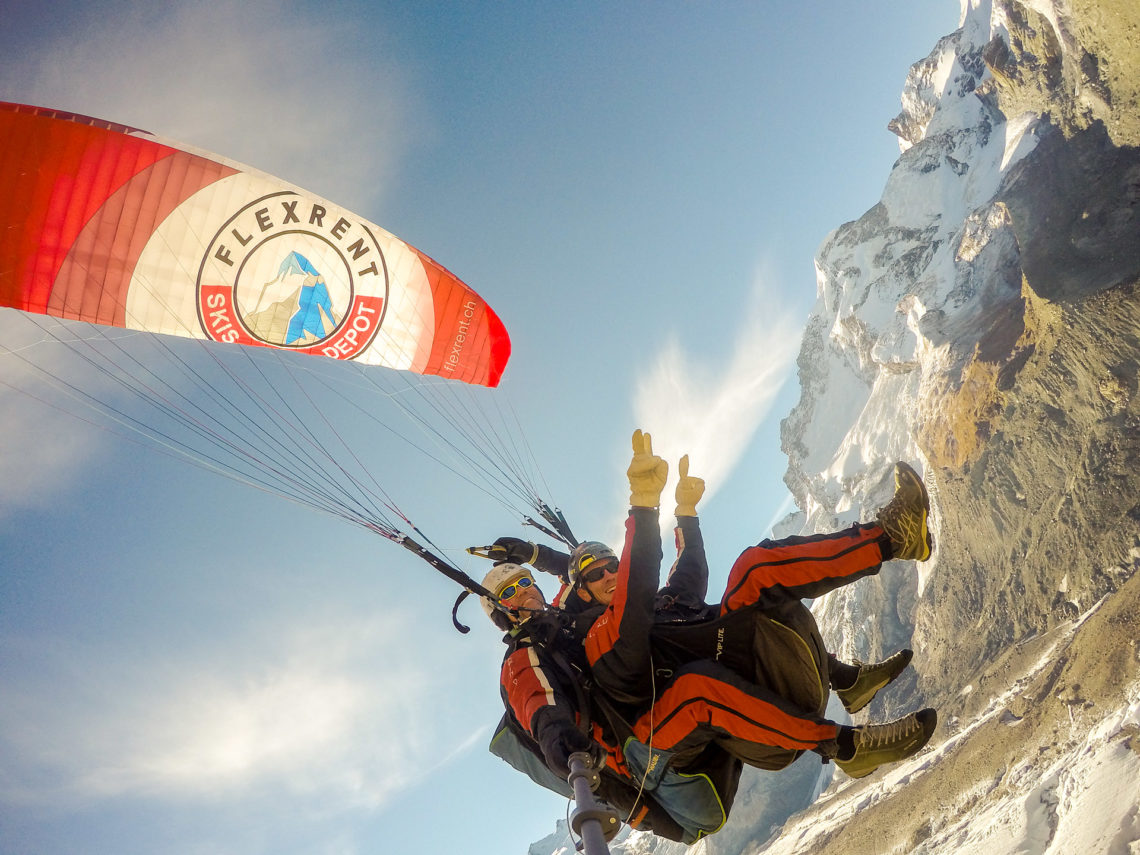 Way back before we started out on this journey, Jenn had mentioned something about paragliding in Switzerland. When we were in Peru, we had briefly looked into soaring off the cliffs in Lima, but the calm skies meant that none of the shops were open. After our first hike in Zermatt, we immediately realized that, of any weather-related cancellations for our adventure, lack of wind was unlikely to be one of them.

We woke up to cold, clear air and not a cloud in the sky to obscure our view of the imposing Matterhorn. After a chilly walk to Fly Zermatt’s office, we had to laugh at the lack of paperwork compared to similar activities in the US; they took down names, and that was it. We provided no ID, signed no waivers and watched no safety videos. They explained what we had to do and trusted us to not be stupid (after some poking around online, I found that Swiss liability laws are heavy on personal accountability, which is one of the reasons why Switzerland is a popular destination for extreme adventure sports).

To get to our takeoff site, we boarded the Gornergrat Bahn, the highest open-air cog railway in Switzerland, topping out at a bit more than 10,000 feet (3,100 meters). We disembarked just below that, at the Rotenboden station (9,235 feet; 2,815 meters), and were immediately greeted by a spectacular view – craggy, white peaks, encased in glaciers whose snowy fingers stretched towards the valley far below. The Matterhorn was on full display, and not even a wisp of a cloud obscured the beautiful scenery. We took a short walk up a small hill, ultimately stopping in front of a couple wooden stakes with pink ribbons on them – the high-tech wind monitoring system for the launching point. 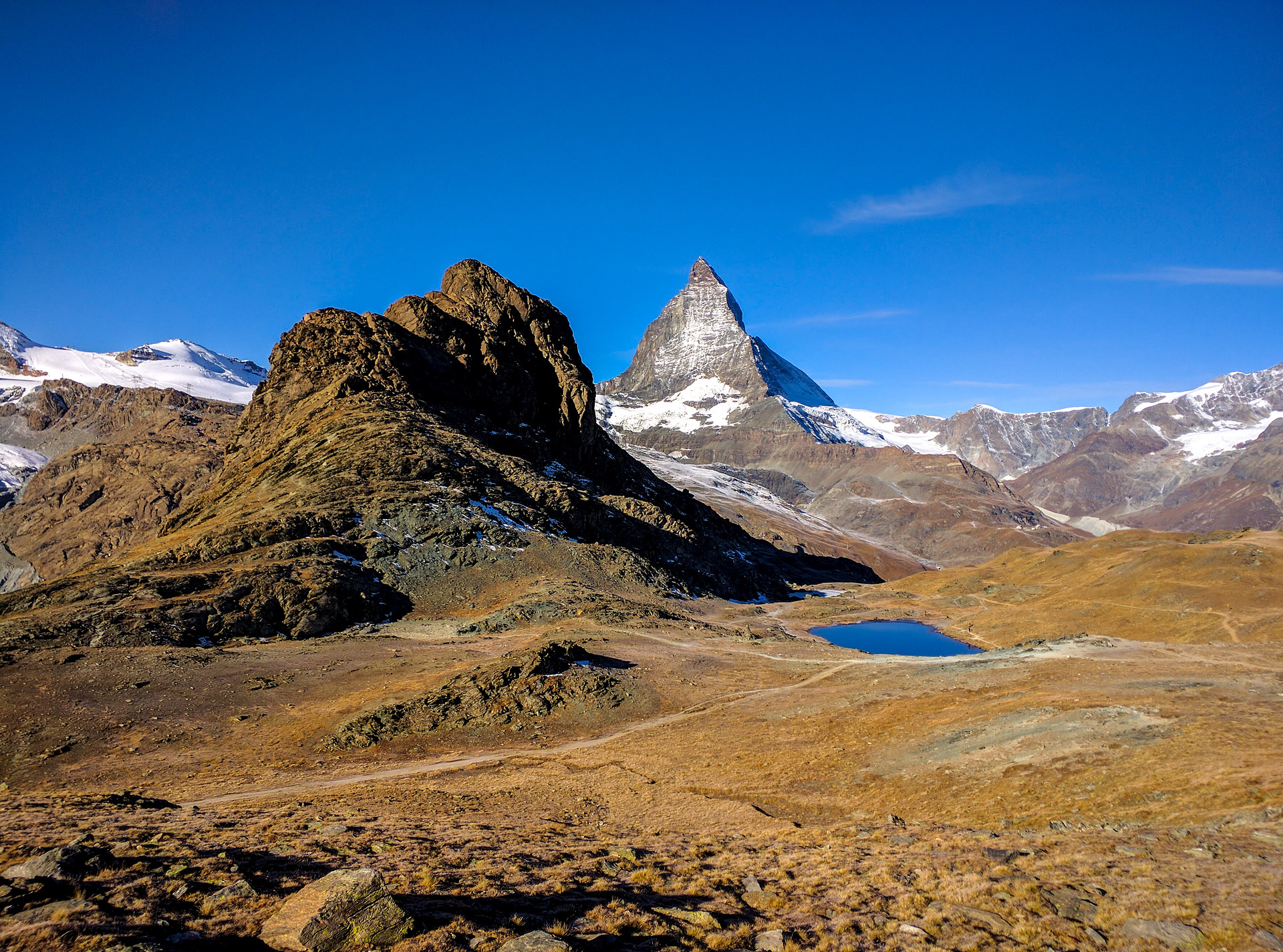 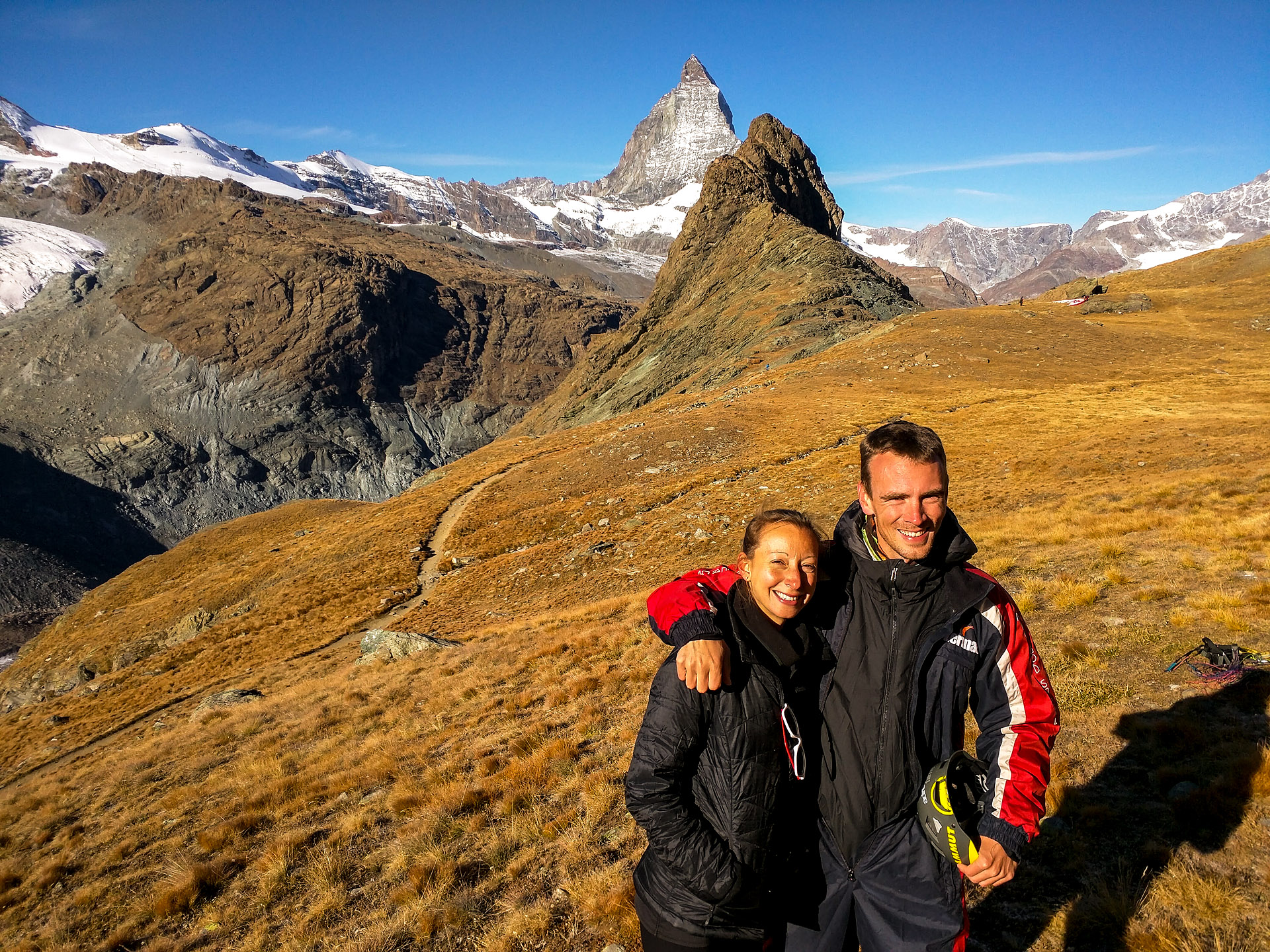 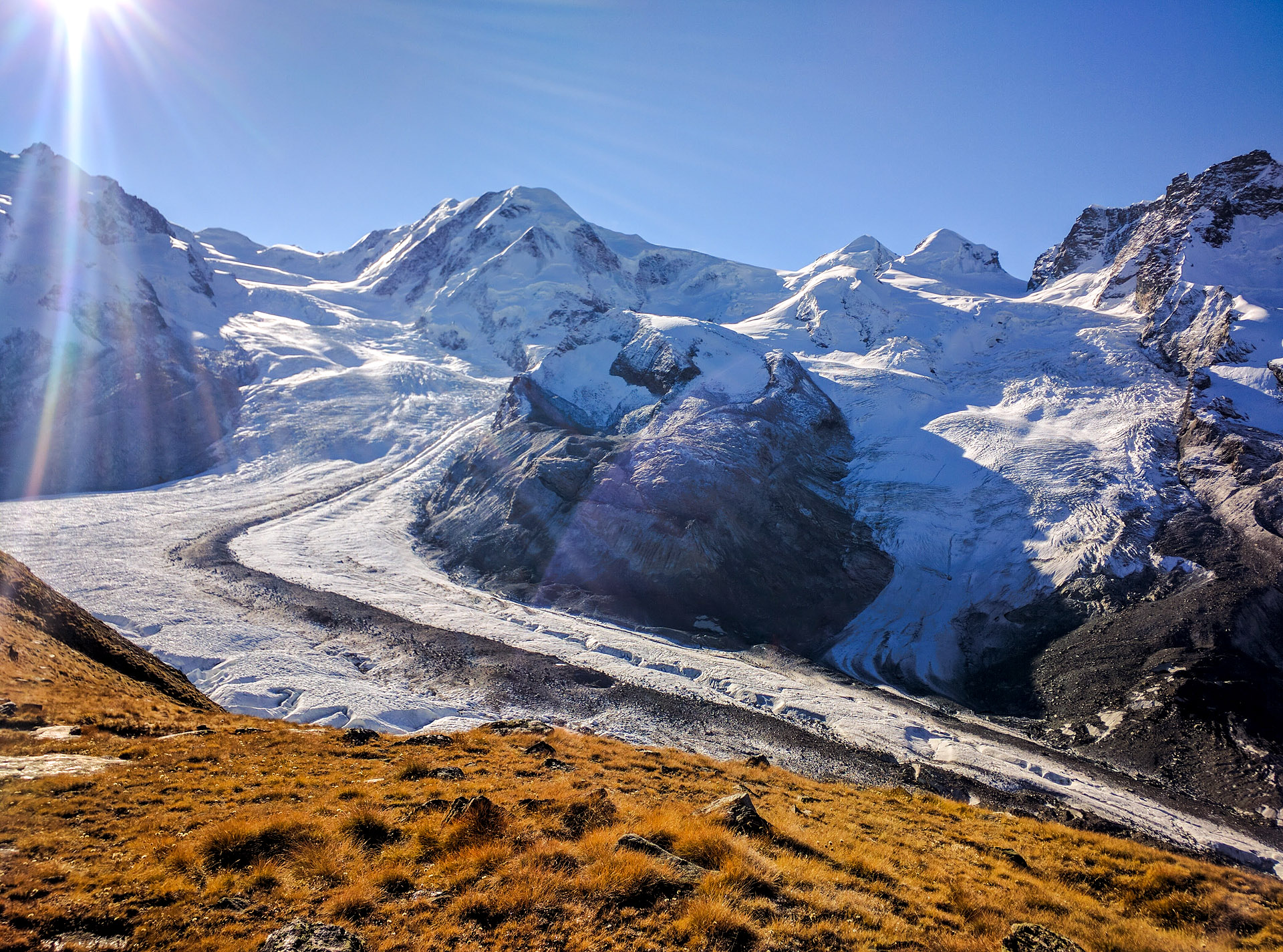 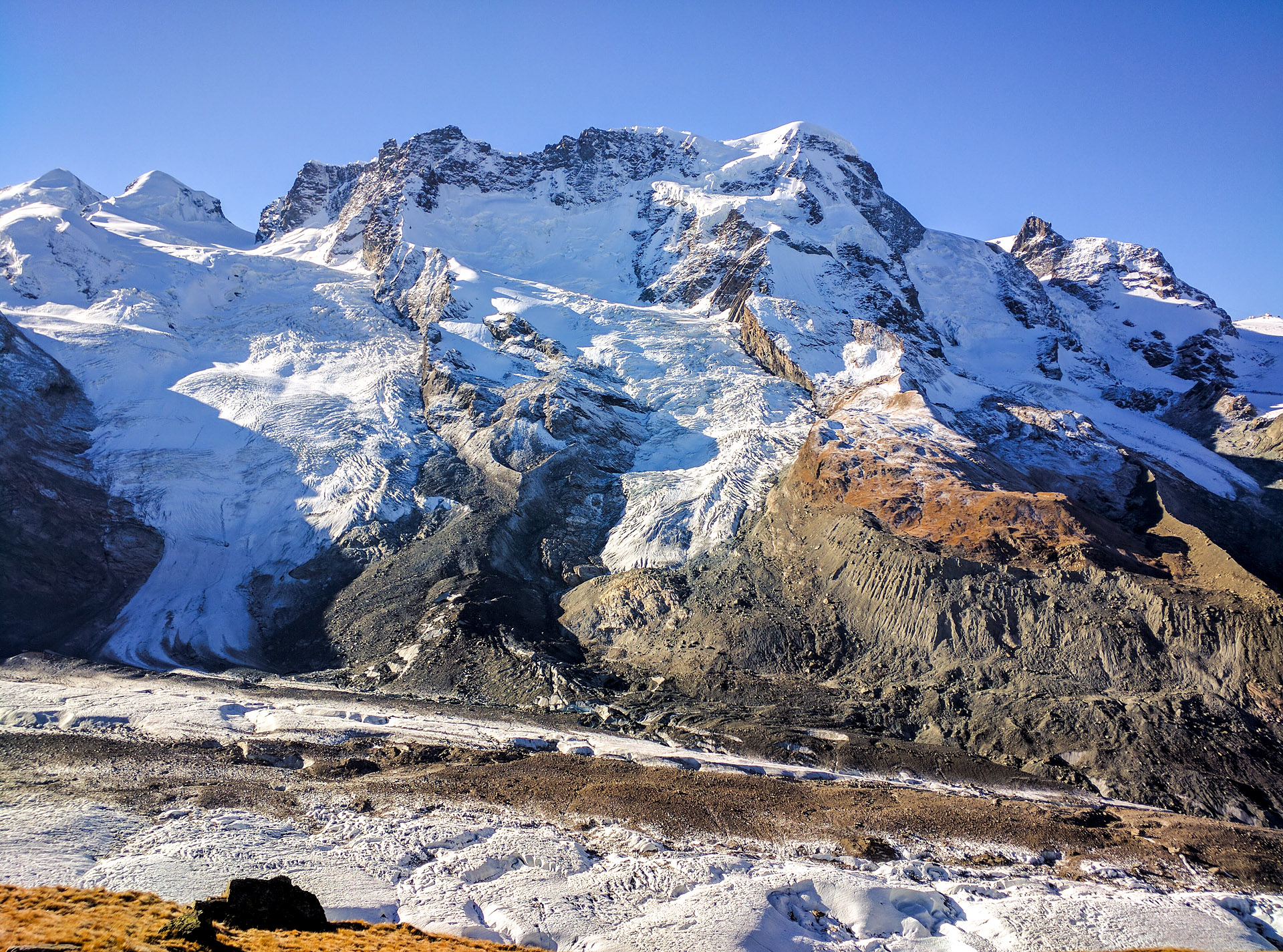 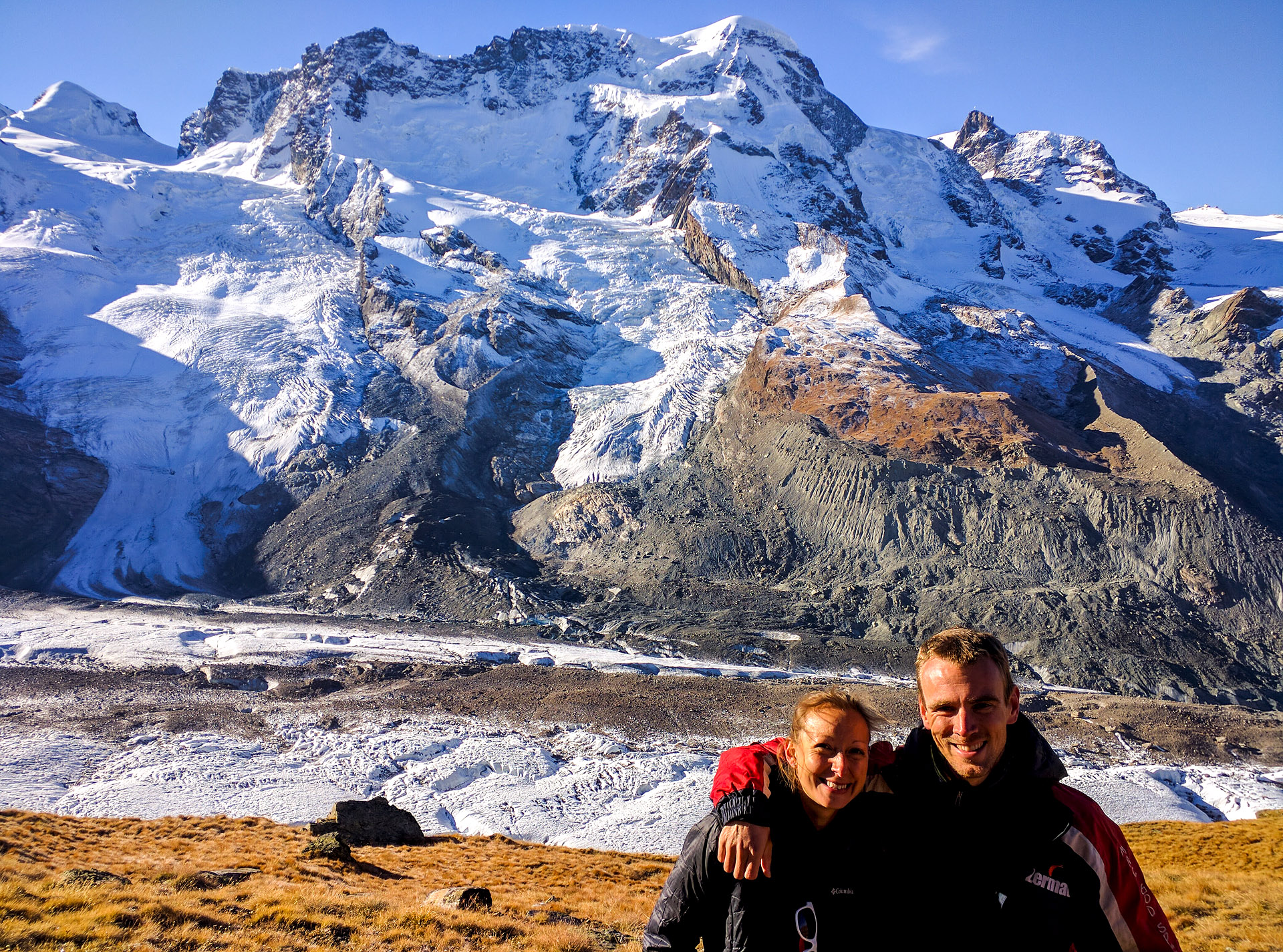 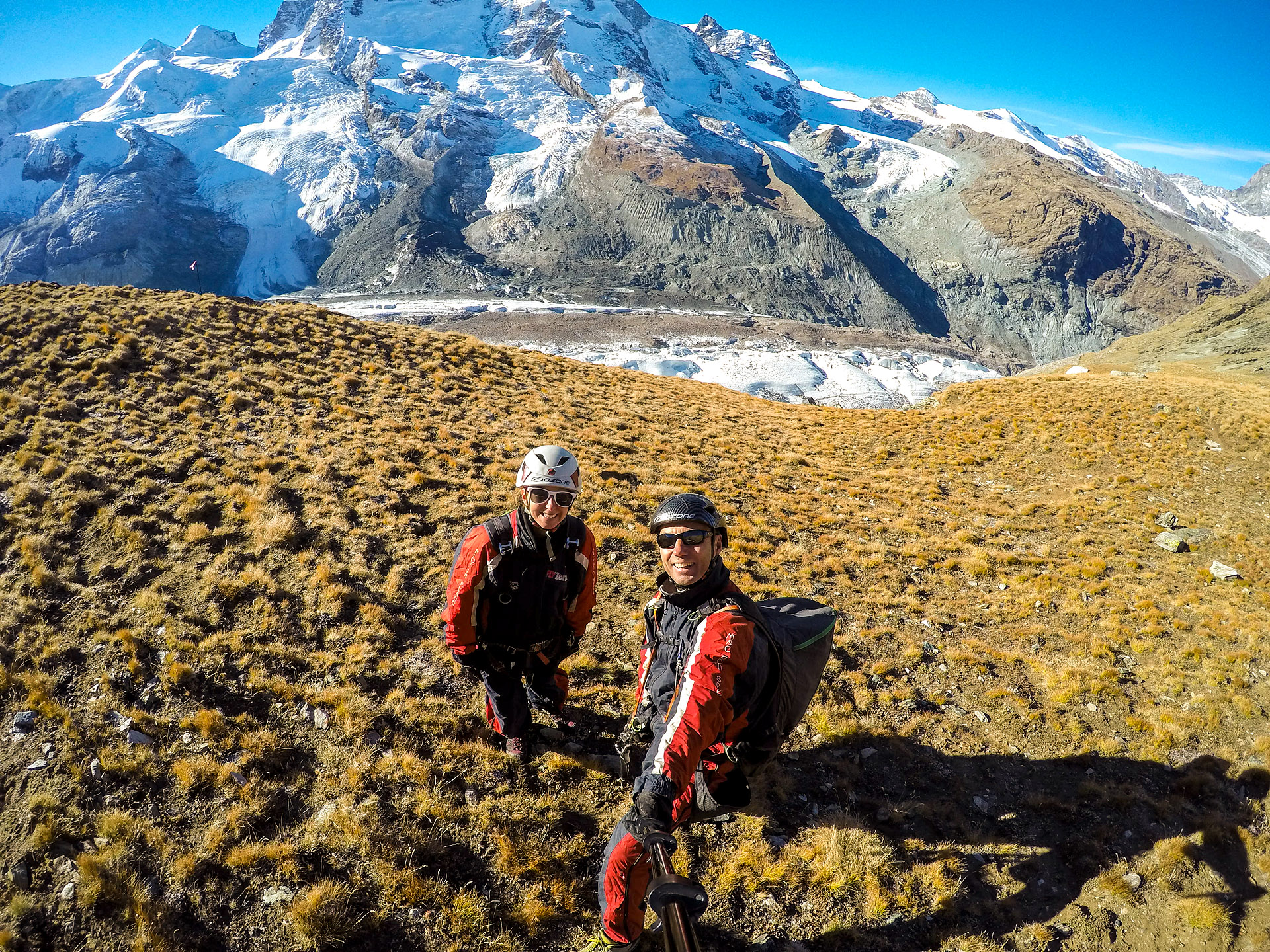 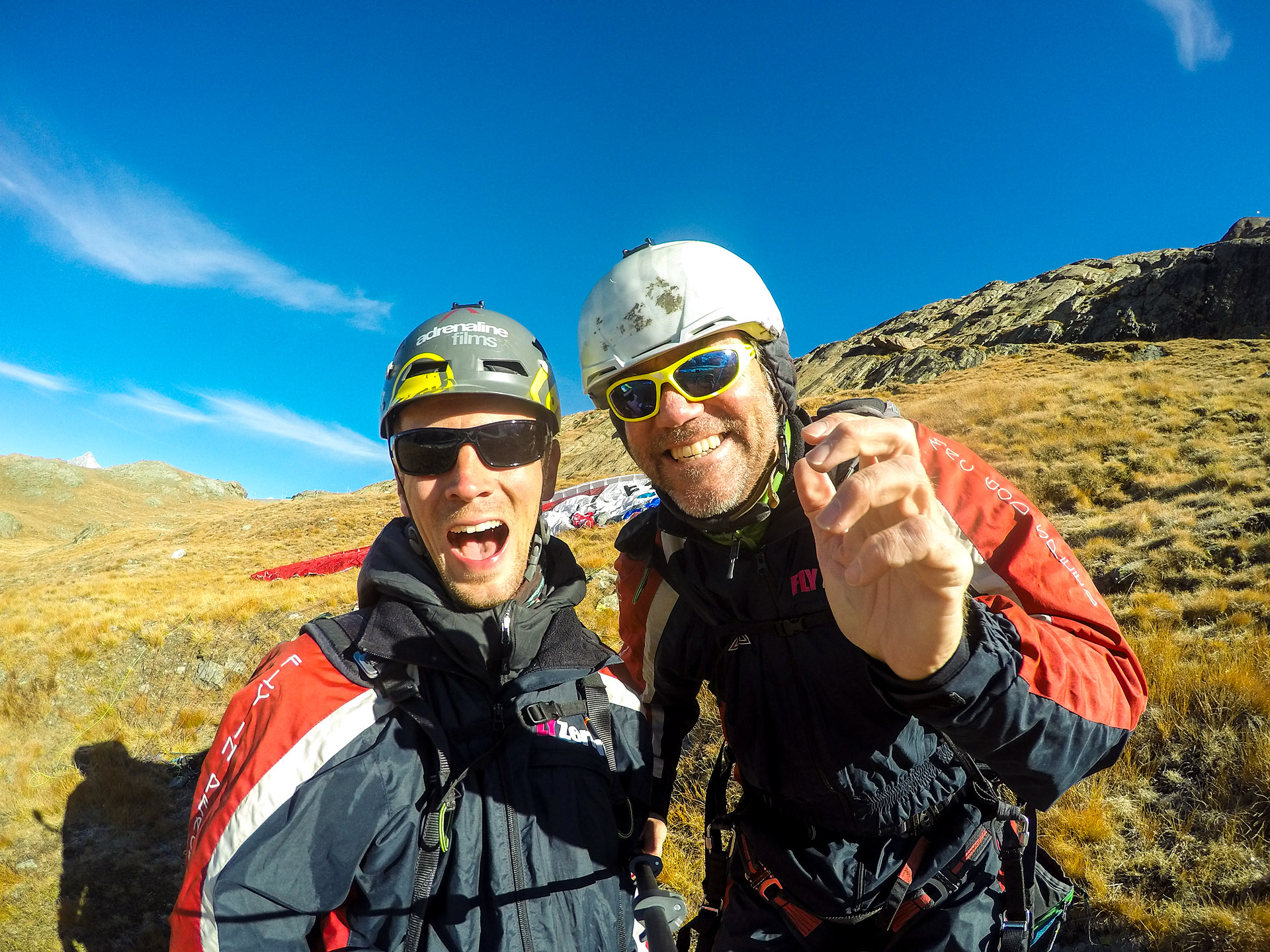 Jenn and her pilot, Ronny, disappeared over the next hill to prepare, while my pilot, Chris, started to unpack the wing. As he spread it out, he told me that paragliding was different from skydiving for two important reasons: one, the wing design differed dramatically from a parachute and was a proper flying instrument (rather than only being designed to arrest your descent), and two, they had the advantage of unpacking the wing before takeoff, avoiding that nerve-wracking moment where you pull the cord and hope you packed it right. He demonstrated the takeoff, and pointed towards the valley, showing me how we’d walk off the edge of the hill and presumably avoid tumbling down the cliff.

We got strapped in, watching the flapping ribbon and waiting for the wind to be right. The ribbon stretched out towards us, and we took a few steps forward, only for the wind direction to change, pulling us sideways and twisting the wing, requiring us to reset. A few nifty yanks of the strings, and we were ready again, taking a few steps into the wind, when suddenly the ground was no longer beneath my feet. It seemed impossibly easy, as if the air had just scooped us up and carried us off.

Almost immediately, we were soaring over some of the most beautiful scenery I had ever seen. The hill dropped away, leaving us dangling over the glaciated Gorner Valley below. To the left, the snow-covered peaks were bathed in the morning light, while straight ahead the unmistakable profile of the Matterhorn erupted out of the ridgeline. The frigid wind viciously sliced at our faces, but in the first few moments, I hardly even noticed. As we rounded the edge of the valley, Zermatt came into view – a tiny Lego community full of ant-sized people. We sailed along the tree line, looking for thermals to carry us higher, before finally succumbing to gravity’s pull and descending towards the city. Shortly before the landing spot, Chris asked if I wanted to try some “wing-overs” – rapid turns that would cause us to swing out more than 90 degrees from the vertical. I enthusiastically nodded and he gave the control cord a tug, instantly dropping my stomach into my shoes. A few more spins and we straightened out again, as Chris looked for the best landing in the swirling winds before giving up on a “stand-up” landing and bringing us in for a short skid on our butts.

After a couple minutes, Jenn came into view, clearly having caught some thermals and heading out far beyond our landing point. They eventually turned around and headed back in our direction, descending towards the grassy field and coming in for a perfect, stand-up landing as if she’d been doing it for years. Of course. 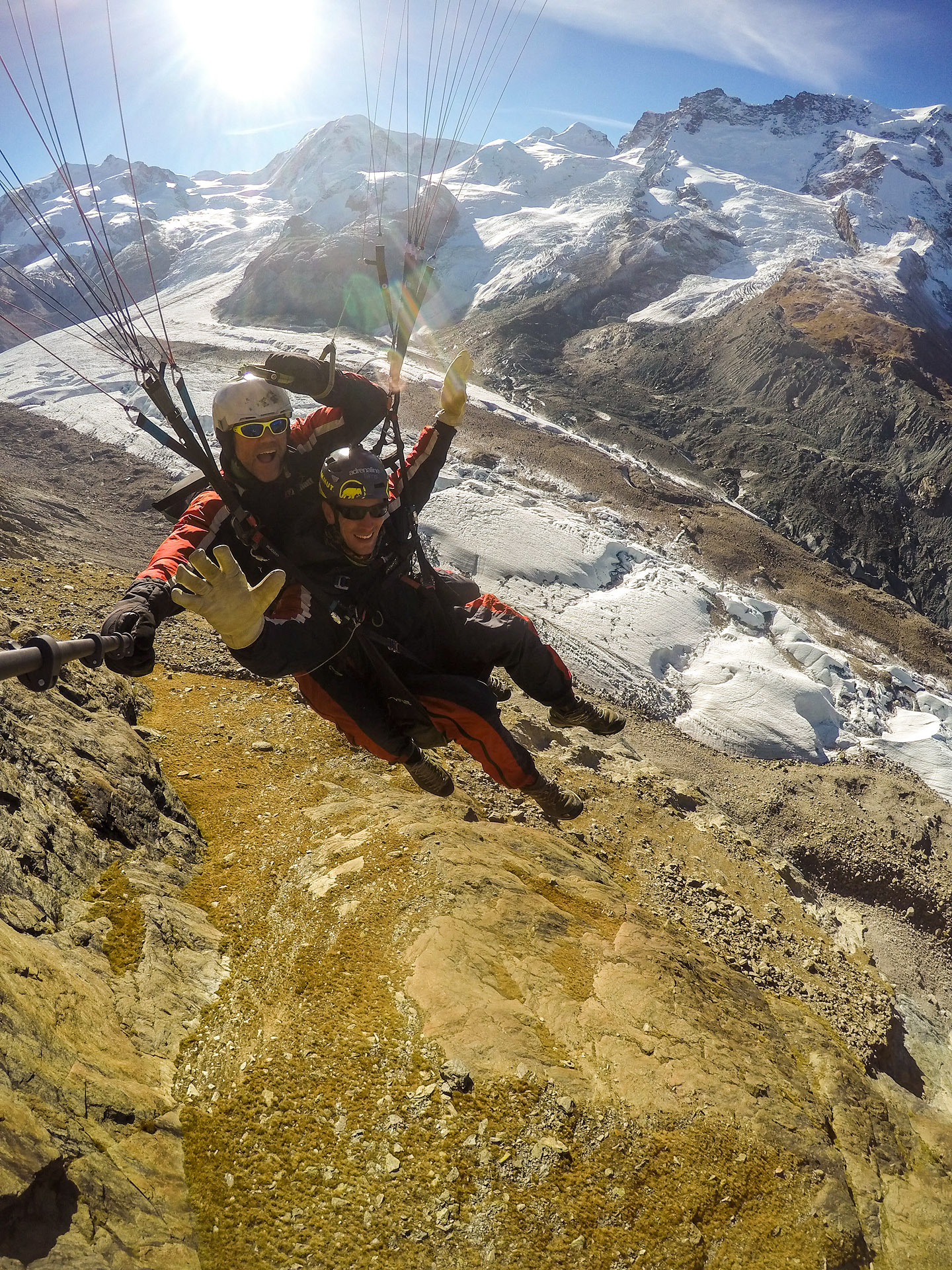 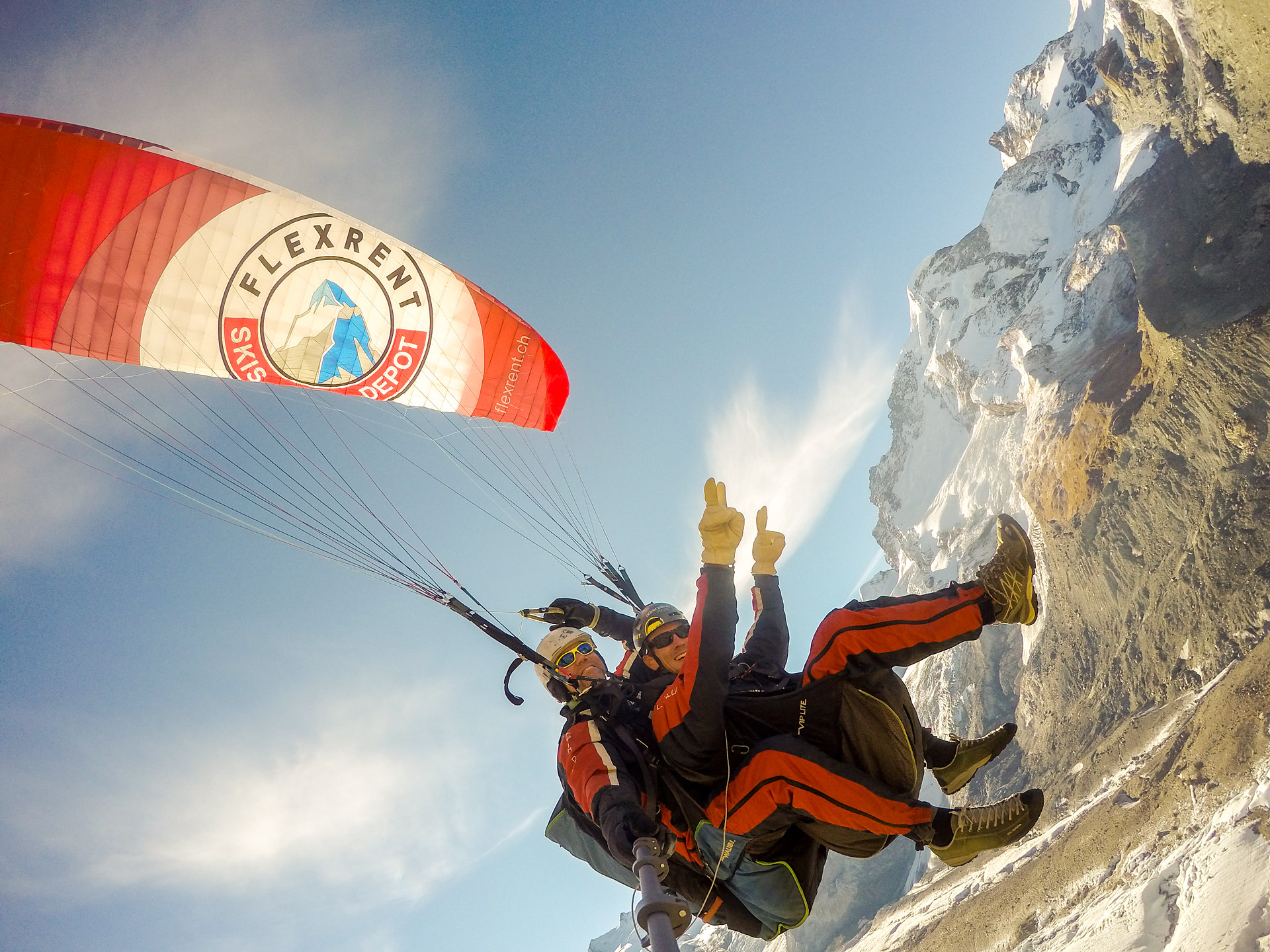 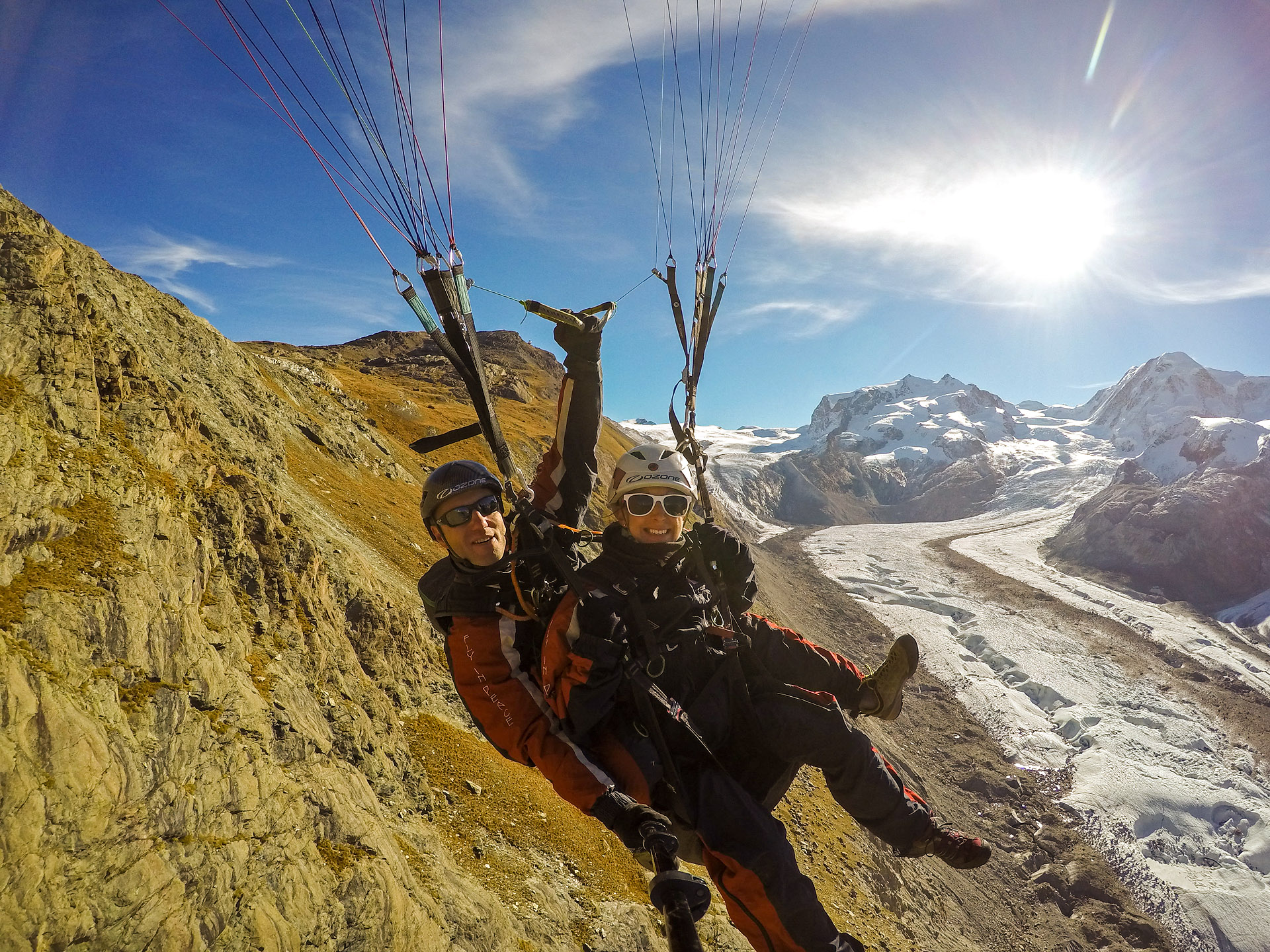 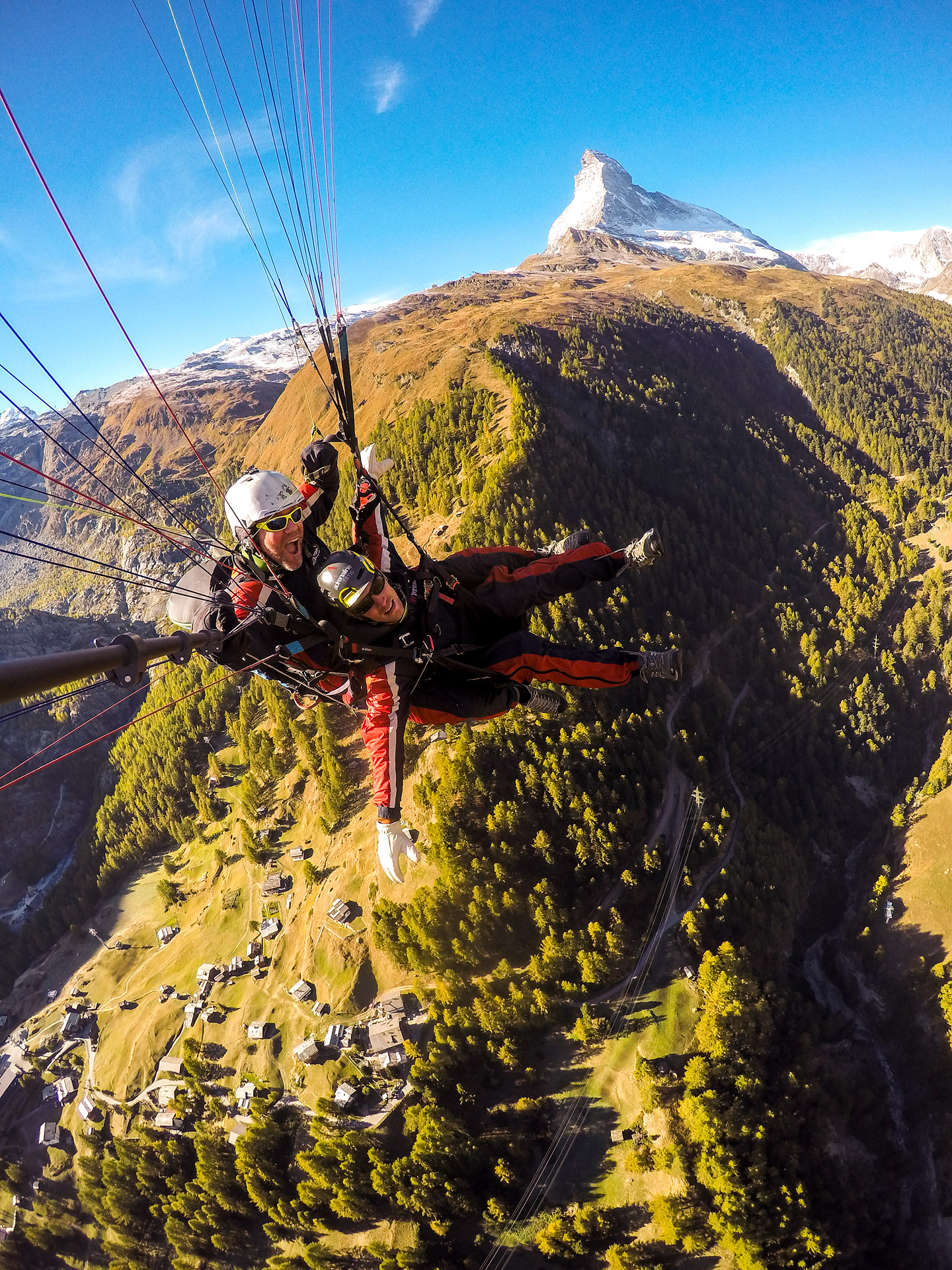 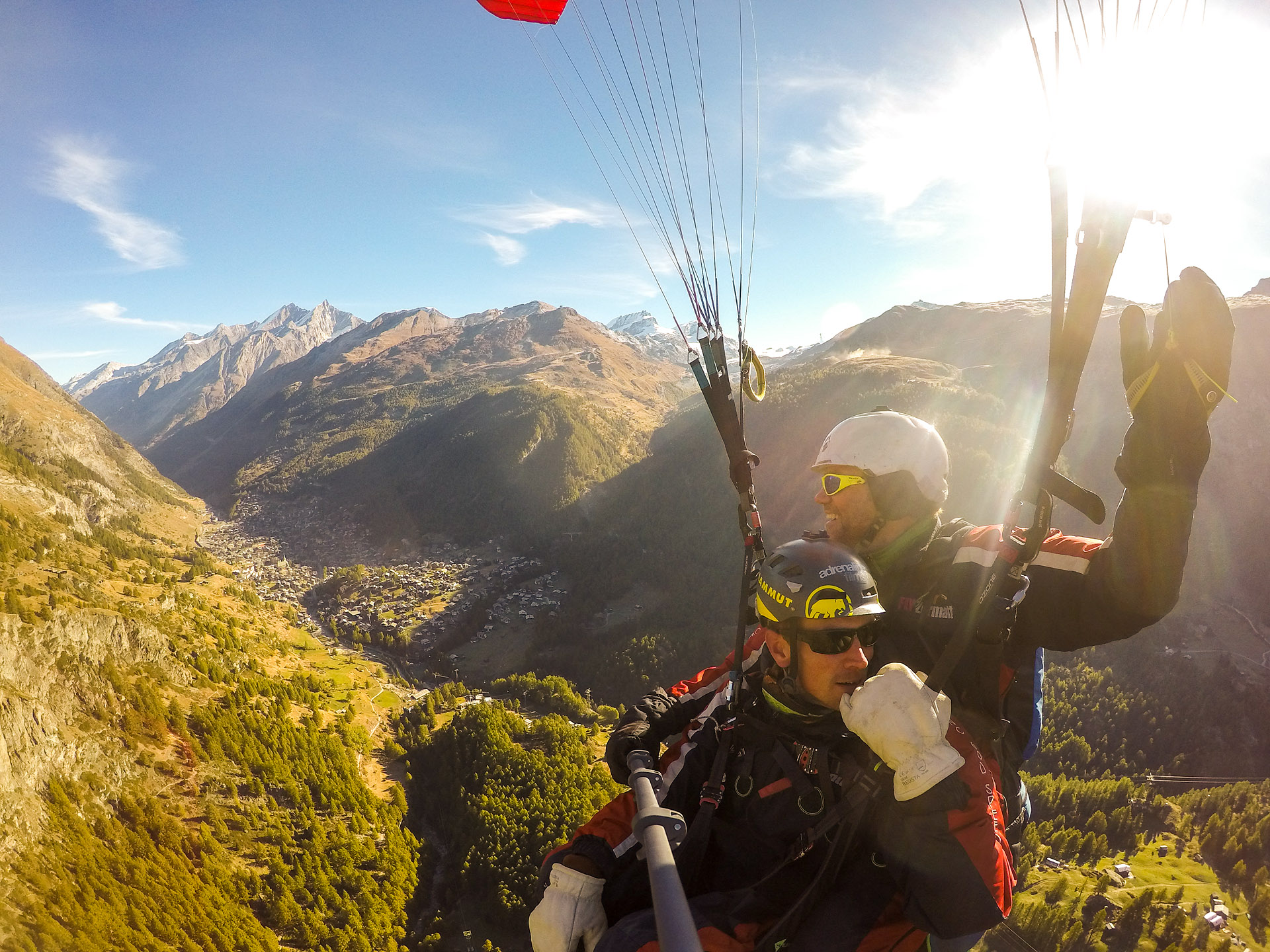 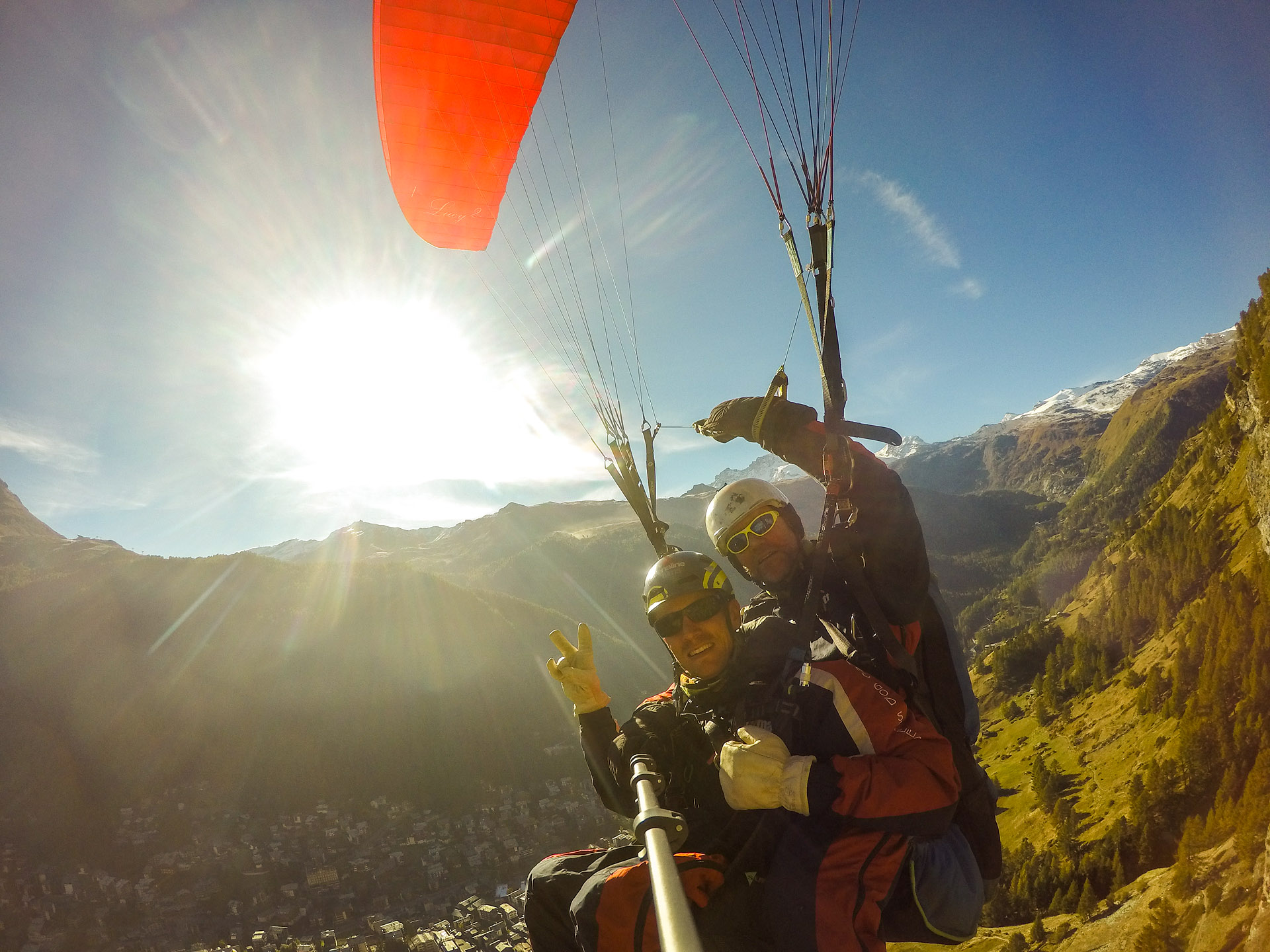 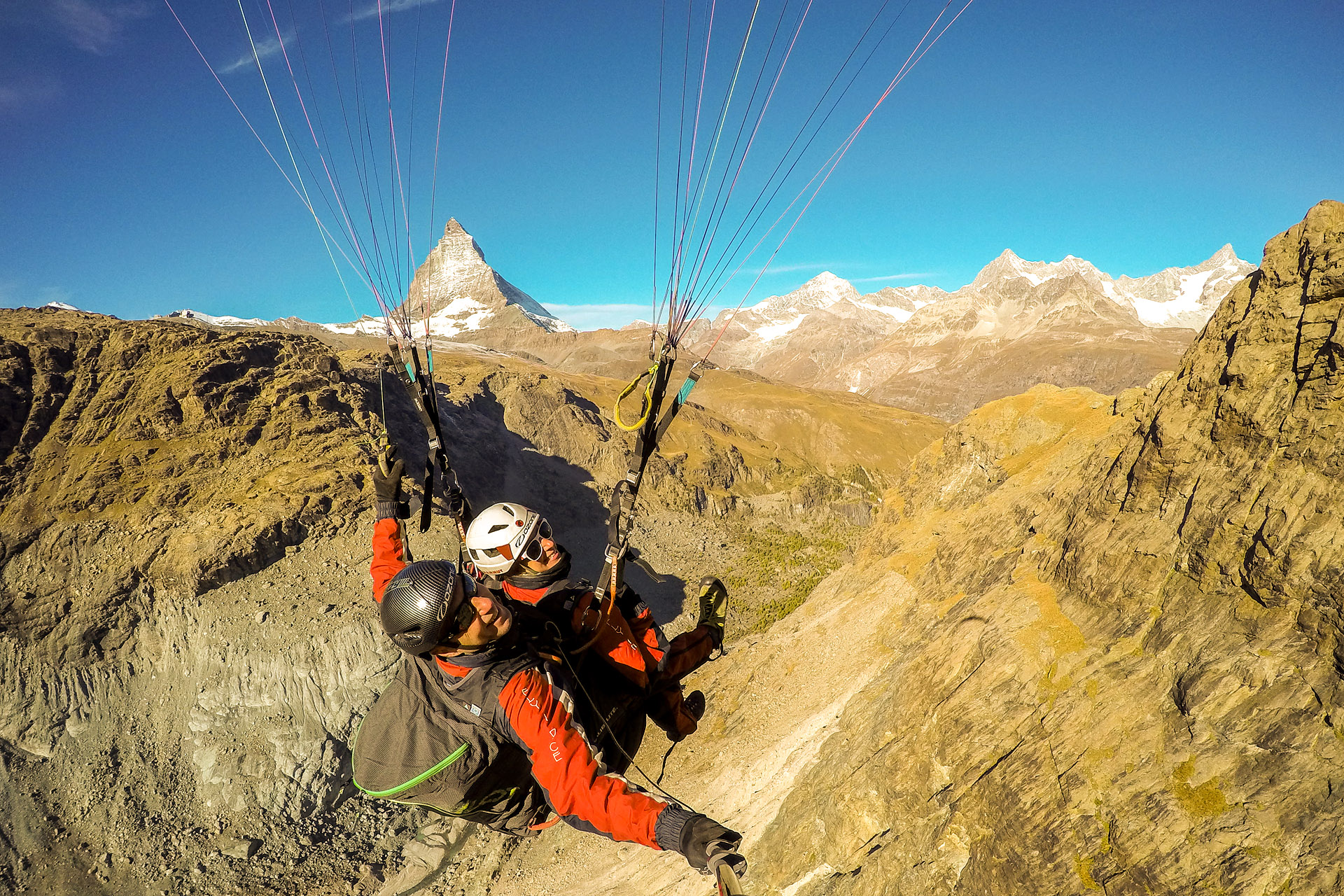 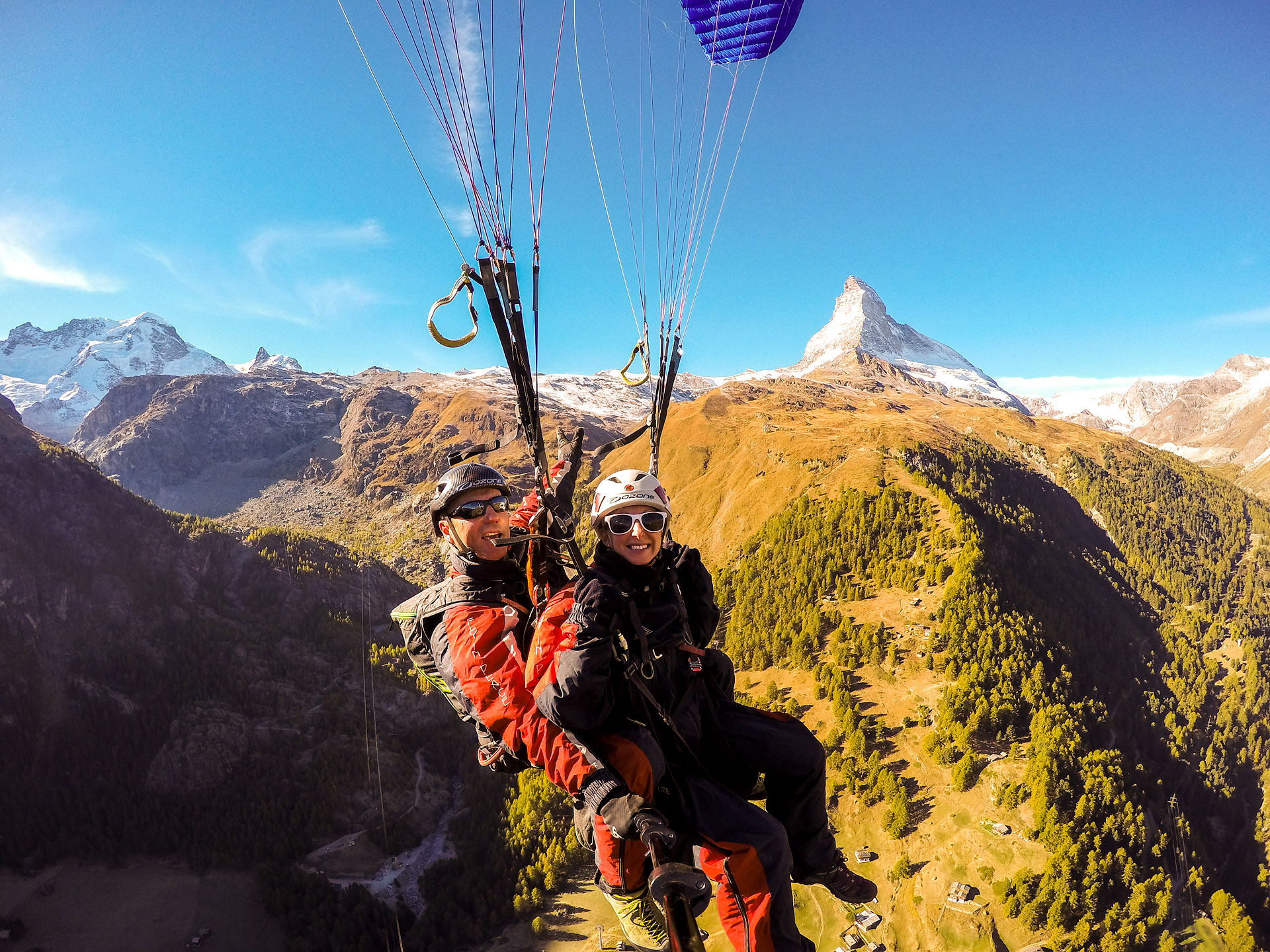 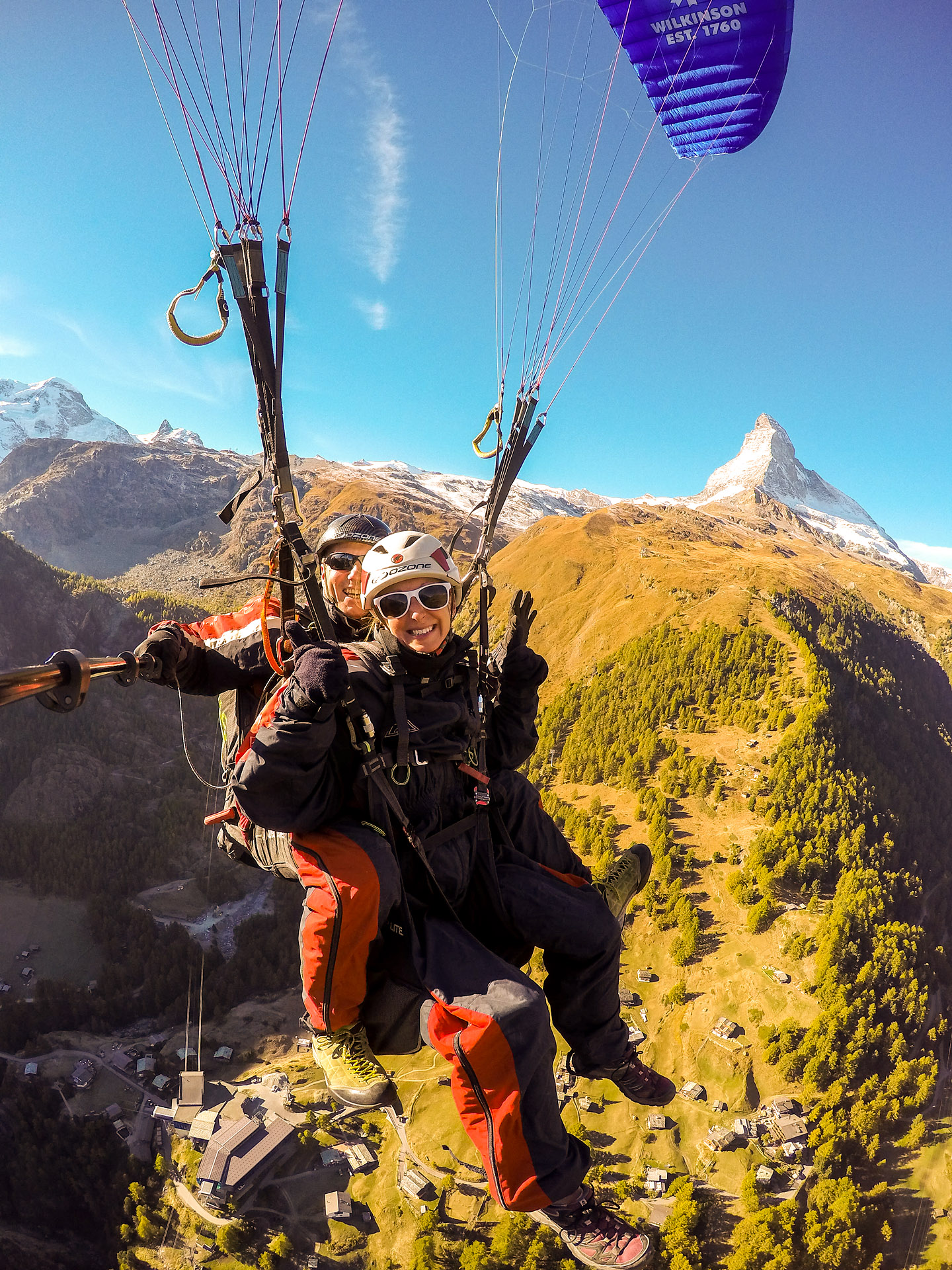 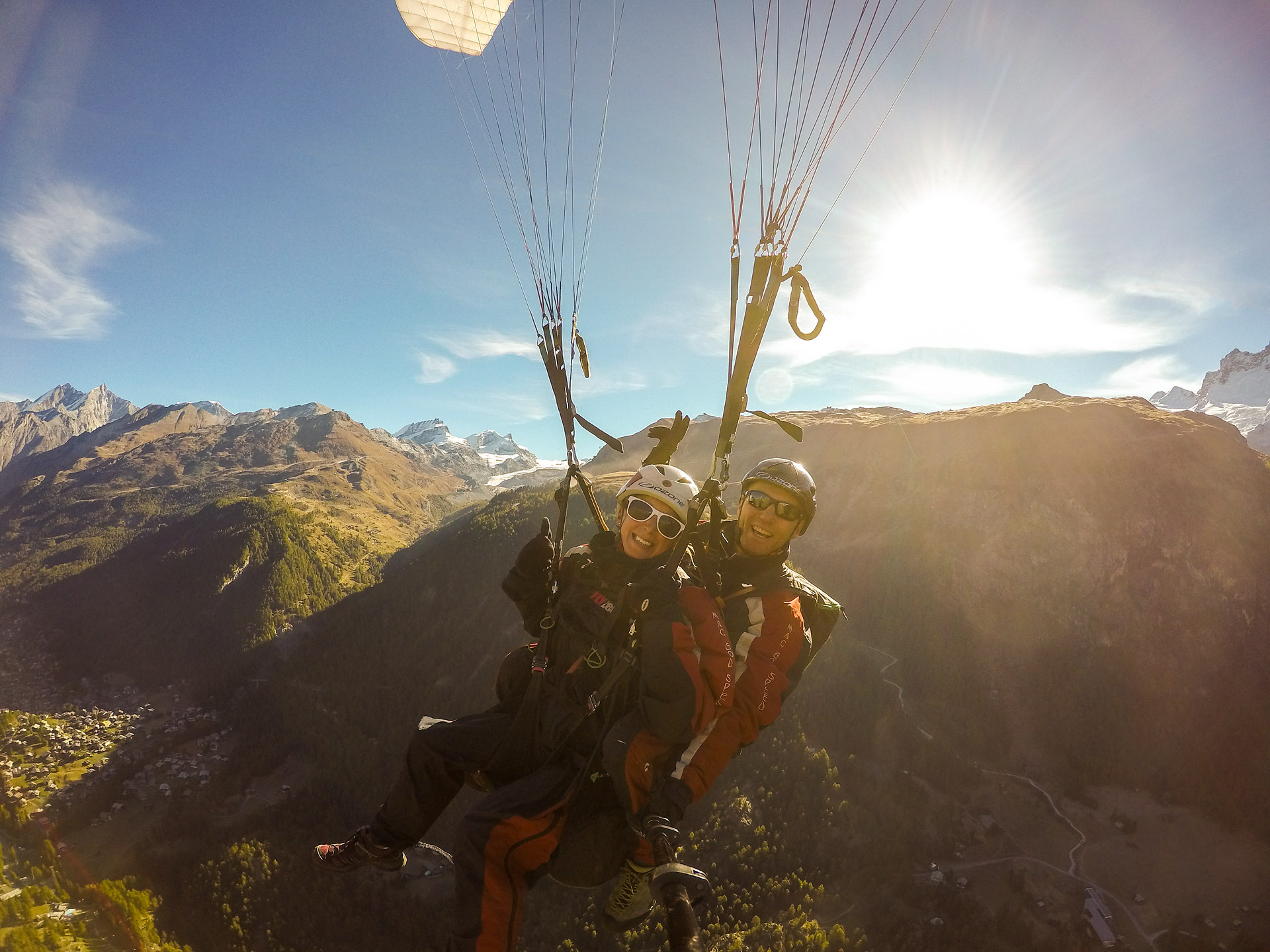 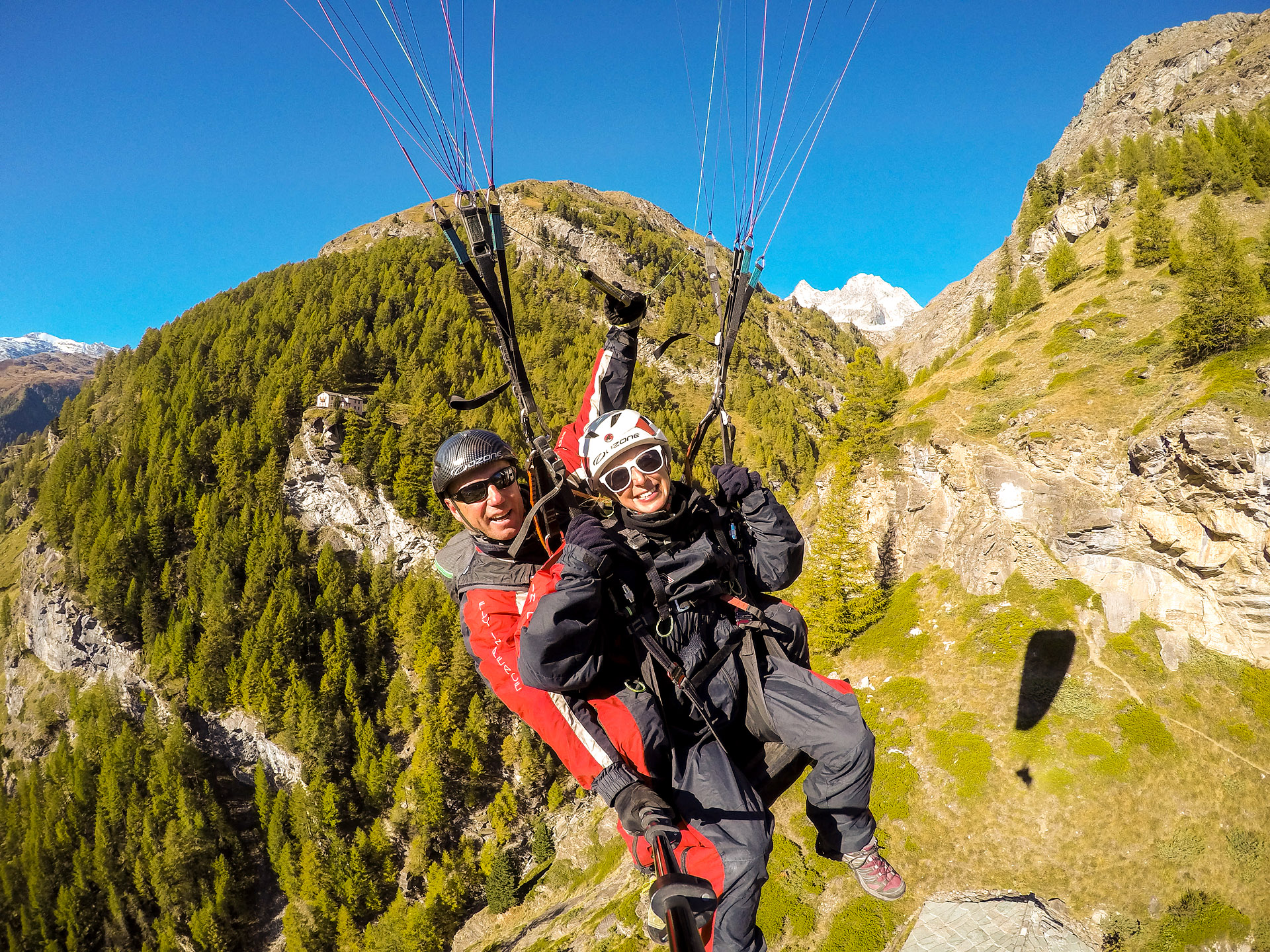 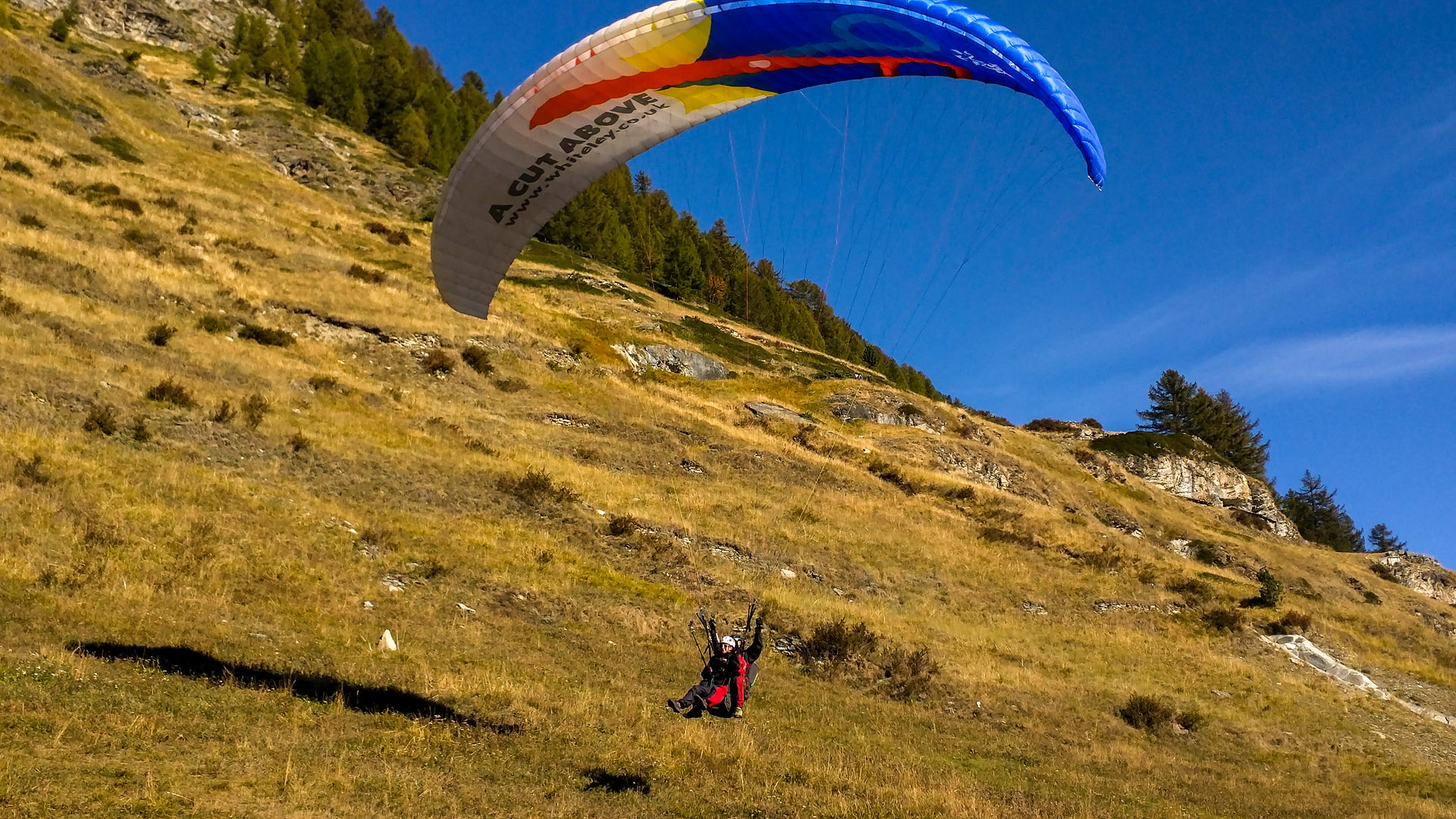 Overall, I think this was one of the most beautiful and enjoyable “adventure sports” that we’ve tried – a peaceful, though cold, ride through a gorgeous landscape. Thanks, Chris & Ronny, we had a blast!