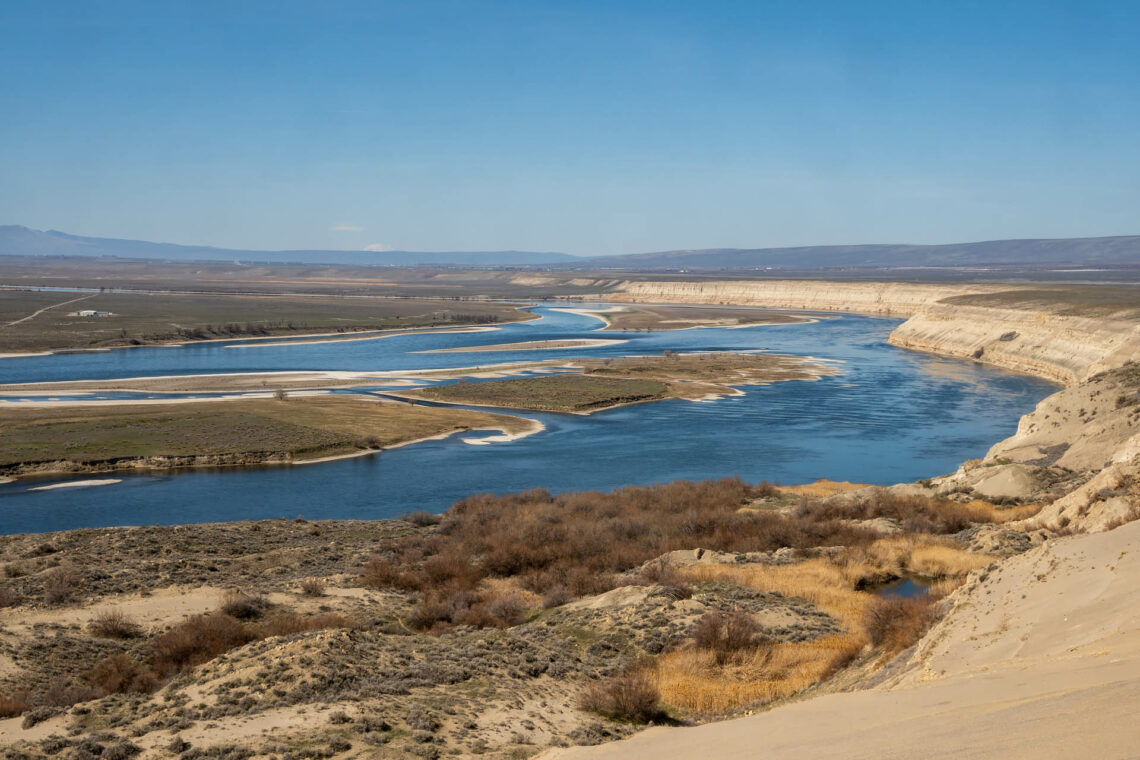 Located in the semi-arid desert of eastern Washington, Hanford Reach is the last remaining free-flowing, non-tidal stretch of the 1,200-mile-long Columbia River. This fifty-mile expanse was preserved by chance, paradoxically as a result of the U.S. weapons program. Once part of the security buffer surrounding the classified Hanford Site, the area surrounding Hanford Reach has since remained undeveloped and undisturbed for almost eighty years.

Back in 1943, the U.S. government took control of nearly six hundred square miles of land surrounding this remote region along the Columbia River. For undisclosed reasons, farmers and Native American Indian tribes alike were forced to cede their land and livelihoods without warning – they were ordered to leave within thirty days and compensated just a small sum of money. Their land was seized as part of World War II’s top-secret Manhattan Project, and would soon become home to the Hanford Site and Reactor B, the world’s first full-scale nuclear reactor. 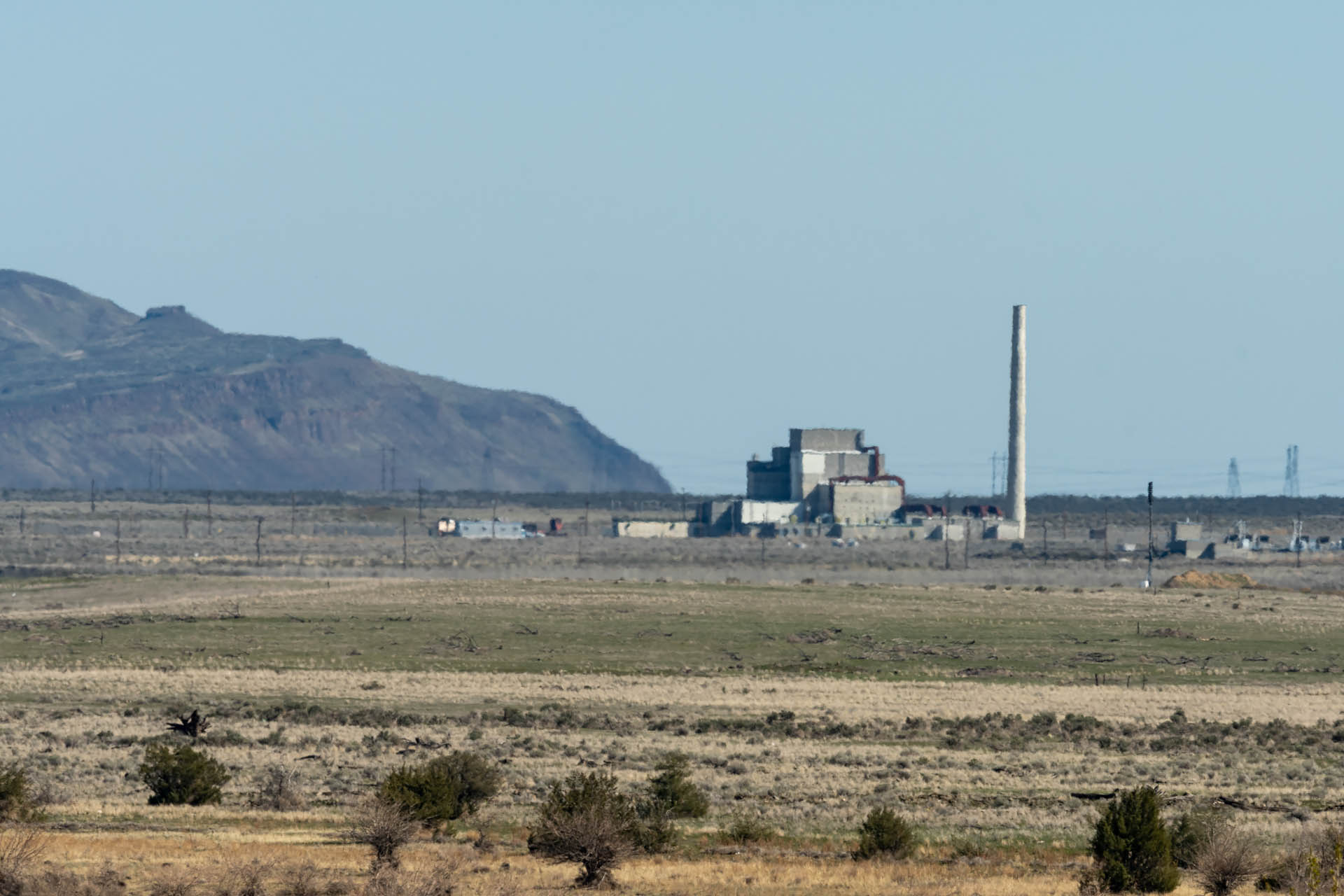 Just two years later in July 1945, plutonium from Reactor B was used at the Trinity Site in New Mexico in the world’s first detonation of an atomic weapon. Less than a month later, Fat Man – similarly fueled by plutonium produced at Hanford – was dropped on Nagasaki, Japan, resulting in Japan’s surrender and the end of WWII. After WWII, the Hanford Site was expanded over the ensuing four decades of Cold War, during which time a growing number of reactors produced enough plutonium to manufacture some 60,000 weapons in the U.S. nuclear arsenal.

While its final reactor was decommissioned in 1987, Hanford remains the country’s most contaminated nuclear site, and cleanup costs are expected to exceed $300 billion. The site discharged some 450 billion gallons of liquid waste, resulting in millions of tons of contaminated soil, and 56 million gallons of radioactive waste still sits in underground tanks. Additionally, more than 60 square miles of groundwater remains contaminated at levels above EPA standards. Scientists have identified some 1,800 contaminants, including heavy metals and radionuclides such as uranium, hexavalent chromium, and strontium-90. The site remains a major environmental concern, particularly because of its location beside the Columbia River. The waterway delivers a crucial water supply to countless farms and vineyards, provides drinking water for millions of people, and is a critical breeding ground for Chinook salmon.

Because of its environmental implications, the Hanford Site has proven to be an interesting niche of study for microbiologists. When I taught general micro labs at NC State, I included a ‘microbe of the week’ segment, with one week dedicated to the Hanford Site and some of its fascinating residents. Most of my students were pre-health majors, seeing micro as little more than a requisite stepping-stone on their paths to becoming doctors and vets. Thus, I endeavored to broaden their perspective and prove that the field is way more interdisciplinary than they probably ever imagined (said the nerdy microbiologist).

Perhaps unexpected inhabitants of a toxic waste junkyard, the Hanford Site is teeming with diverse, subsurface microbial communities. A 2012 study published in Environmental Microbiology analyzed microbial diversity at the Hanford Site. After collecting and sequencing samples from depths of 30 to 170 feet, researchers were able to detect more than 1,200 unique bacterial OTUs (groups of individuals closely related at the sequence level) living beneath the surface.

One of those groups of bacteria was Geobacter, a genus first identified at the Hanford Site in 2008. Geobacter is able to reduce iron and other metals, generating electrons during this metabolic process. The bacteria can then transport the electrons over long distancing using pili – microbial nanowires that are 20,000 times finer than a human hair.

Because of these unique characteristics, Derek Lovely’s lab at UMass Amherst has been studying Geobacter and other anaerobic bacteria for use in microbial fuel cells. Because these bacteria can generate electricity, they could be harnessed to produce a battery that essentially runs on mud, powered by the unseen microorganisms living within.

Arguably even more important than their potential as a bioenergy source, however, is the application of these bacteria in bioremediation. Geobacter and other metal-reducing microbes could be used to decontaminate polluted water or to clean up toxic waste (heavy metal contamination) from oil or mining sites. Because the Hanford Site sits adjacent to the Columbia River, these subsurface microbes could already be providing a natural barrier – helping to prevent toxic metals from leaching into the Columbia River system.

Could native bacteria like Geobacter be stimulated to better clean up uranium-contaminated sediments at the Hanford Site? How can we optimize these bacteria to more efficiently metabolize (and consequently, remove) such metal contaminants? The Department of Energy is interested in using such microbes as a safe, sustainable, and cost-effective means to remove dangerous contaminants from our environment, and it will be interesting to see what role they play in the future.

Hanford Reach offers hikers a couple of walking trails to explore this unique region – White Bluffs North (6 to 7 miles roundtrip) and White Bluffs South (8 to 10 miles roundtrip). Both trails offer panoramic views of the Columbia River, although the high sand dunes are only found on the north slope.

With the higher elevation trails around Leavenworth solidly ensconced in snow, we decided to take a day trip to explore Hanford Reach. It was a beautifully clear day, and we were ready to be wowed. I can’t say it’s a place I ever thought I’d visit, but we had a really nice outing.

Along the reach’s northern banks sit the White Bluffs – an escarpment of sandstone bluffs capped with towering sand dunes. It’s not the landscape you envision when you think of Washington state, which makes it all the more striking. The environment here is semi-arid sagebrush steppe, and is home to coyotes, deer, sandhill cranes, white pelicans and loons. 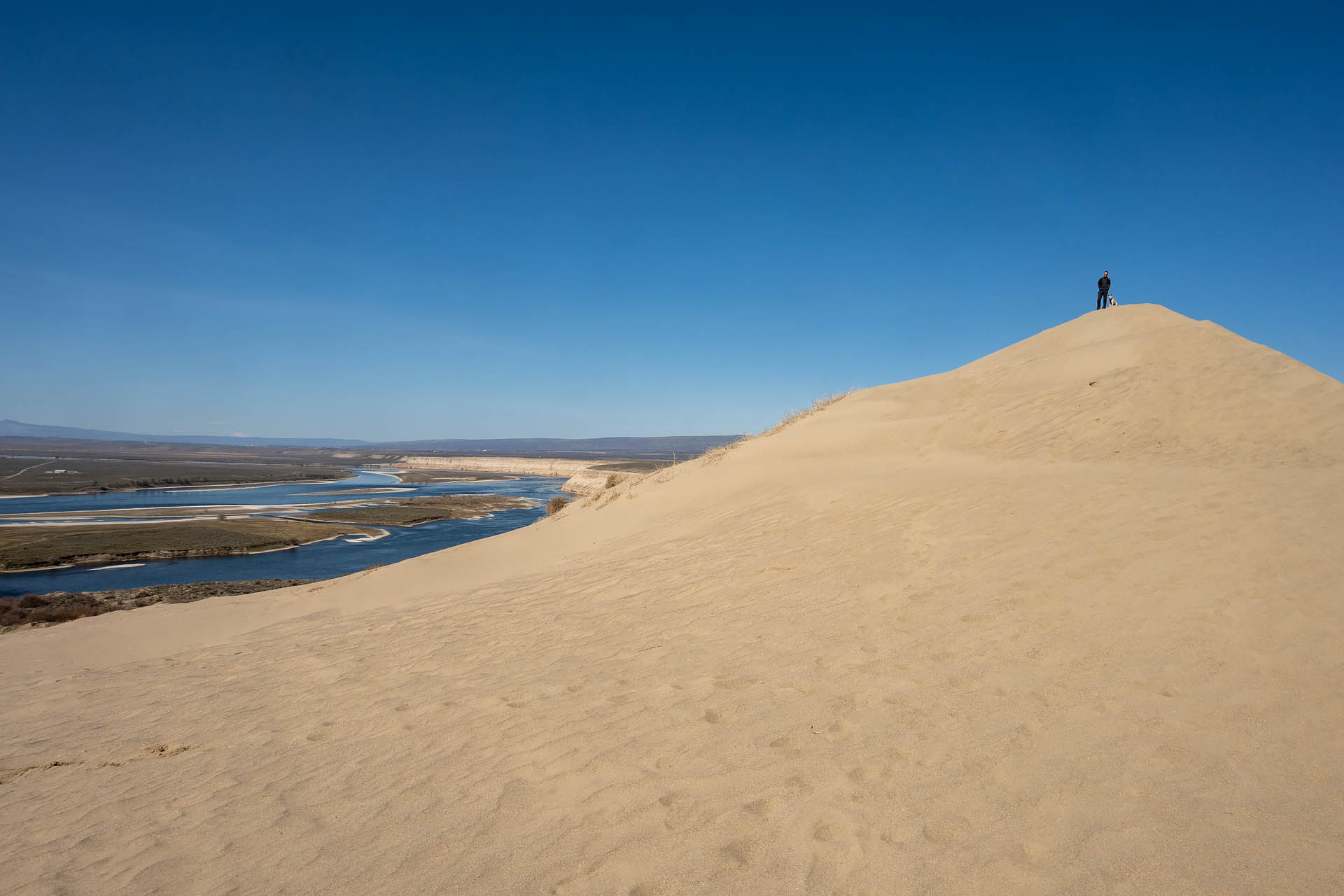 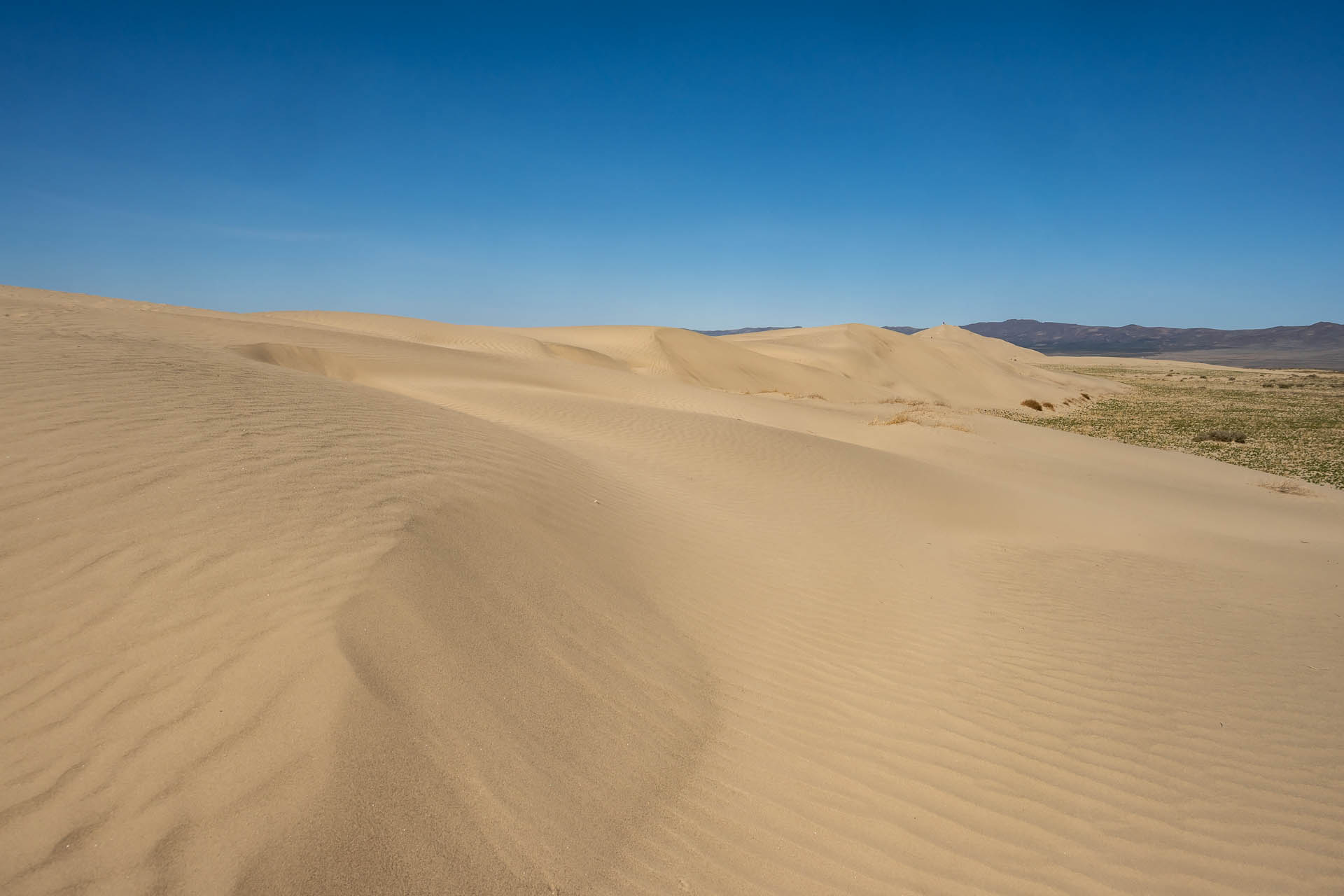 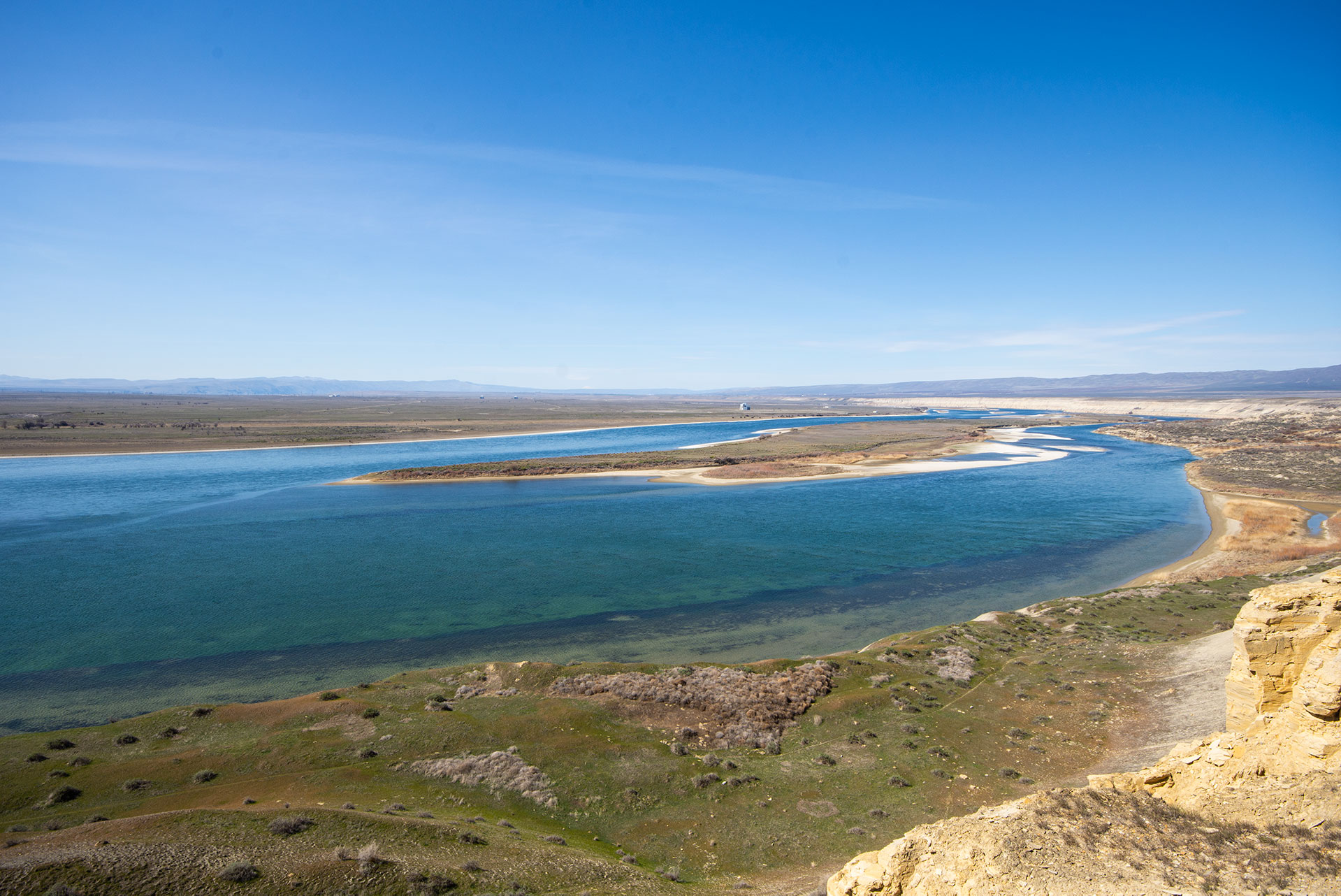 Because the area around White Bluffs has seen no agricultural development and very little human foot traffic over the last eight decades, wildlife has indeed thrived here. That said, its proximity to the Hanford Site does make it vulnerable to harmful pollutants that could potentially leak out. All radioactive material is contained within restricted areas upstream at the Hanford Site, however the tanks are aging and the sky high costs of clean up create a race against time. While Hanford Reach looks unspoiled, it’s really a unique and troubling paradox – it’s an environment untouched by humans, yet simultaneously threatened by our radioactive remnants.

The north trail at White Bluffs is a scenic, six-mile out-and-back that traverses a section of high dunes along the Columbia River. For the first two miles the trail is well-defined, passing through scrubby sagebrush as it climbs toward the top of first dune. Looking west across the river, you can just make out Mt. Rainier’s glaciated crest in the distance. The river’s swirling shades of blue are particularly striking here, as are the eponymous bluffs that tumble down to the vibrant water. 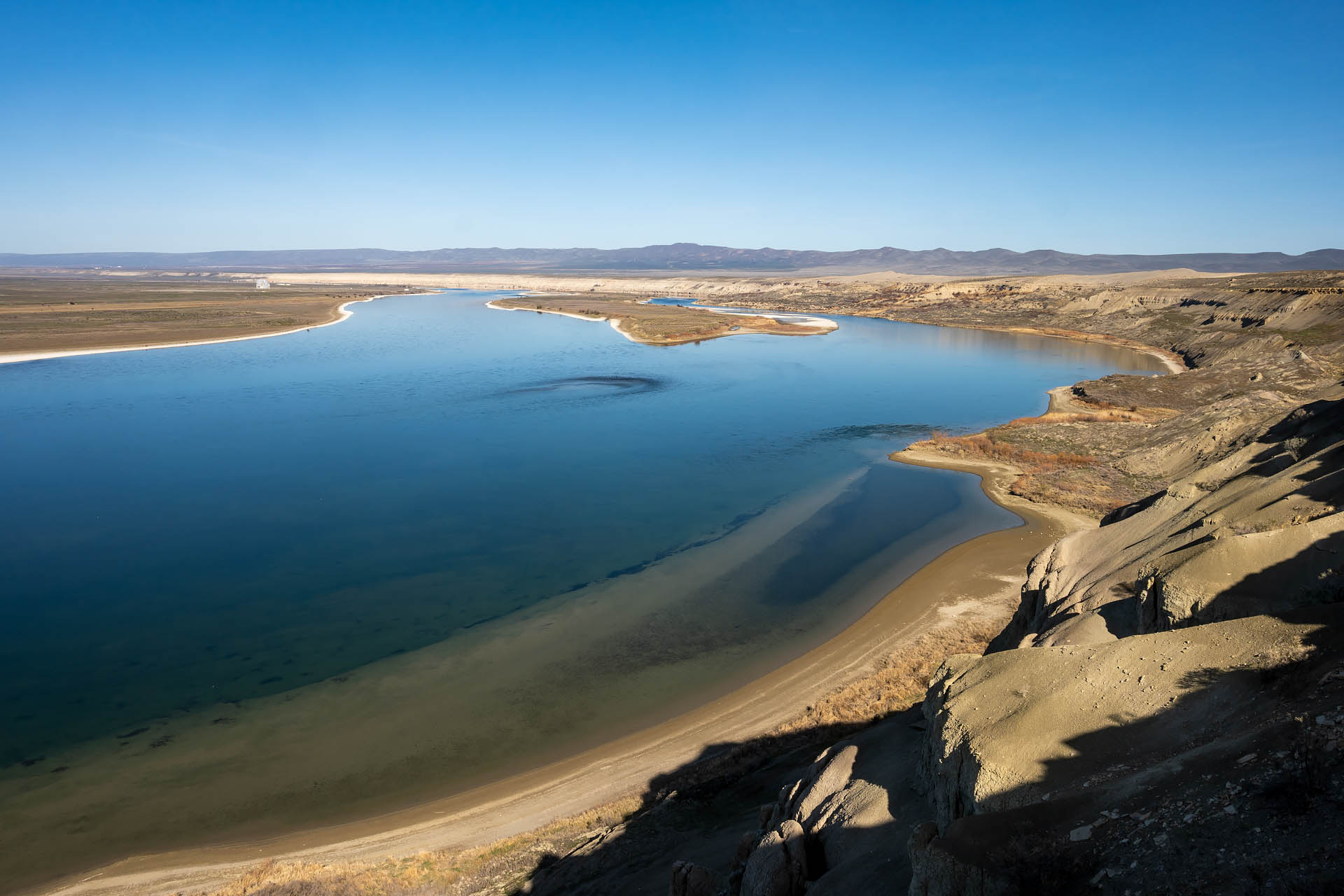 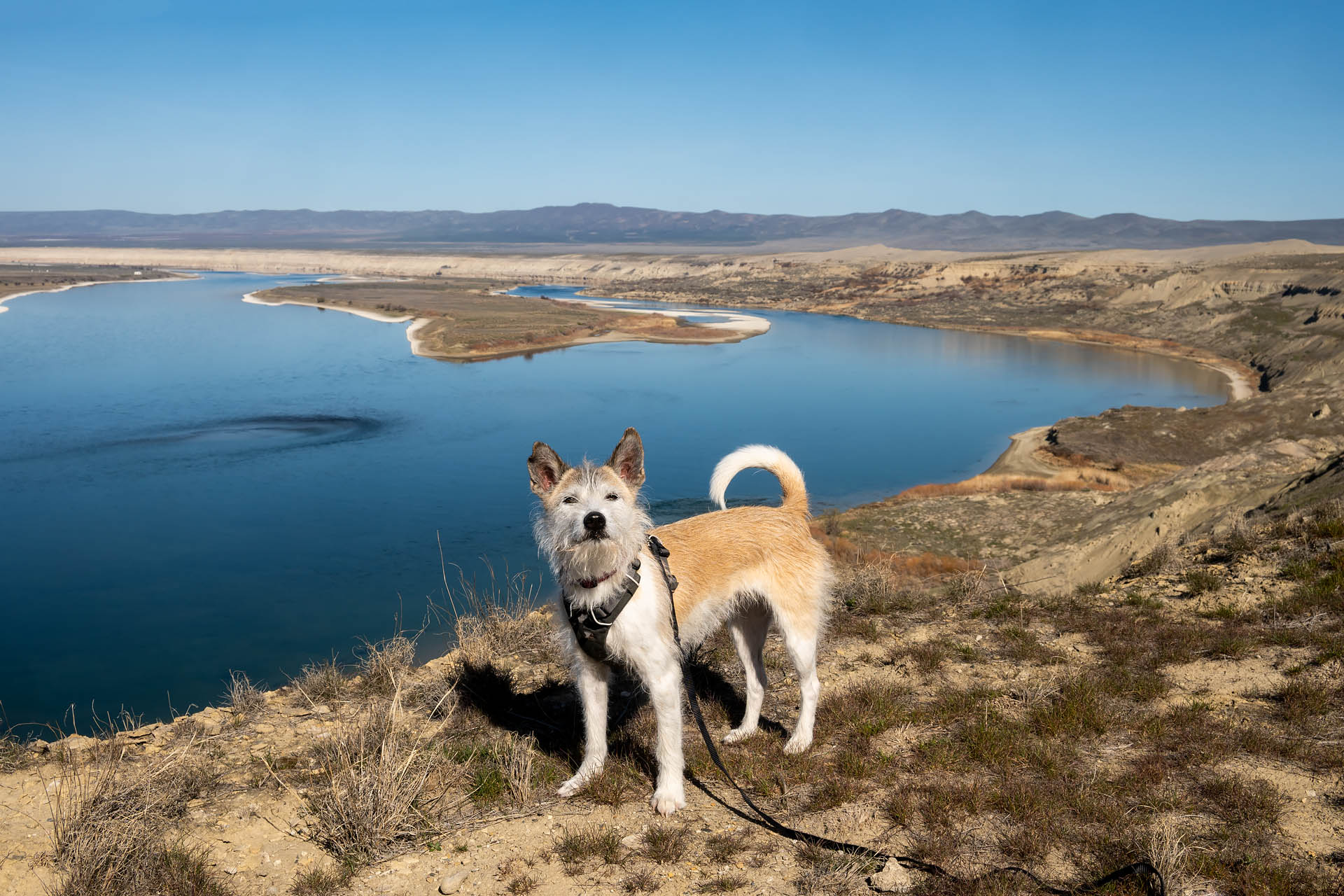 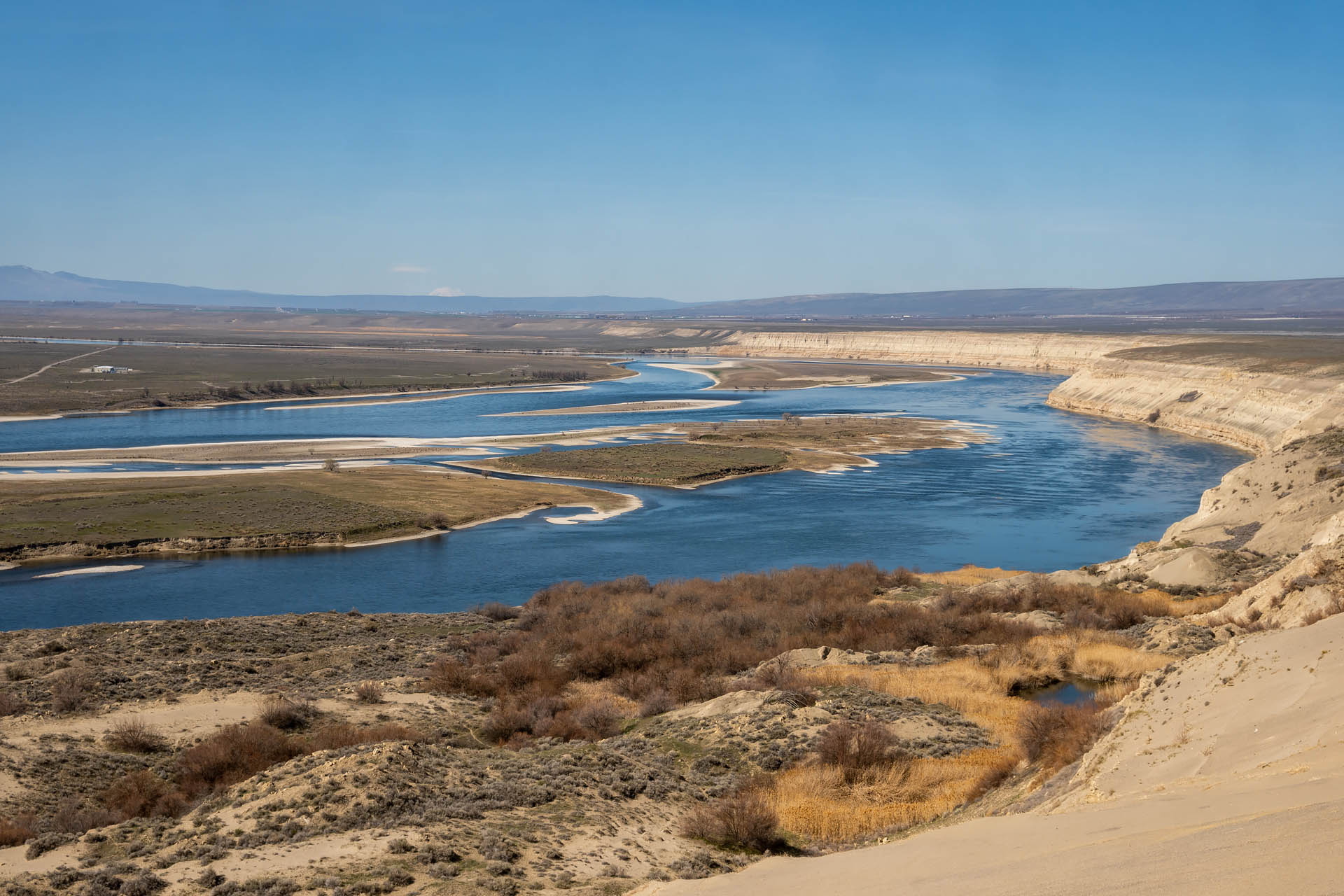 After reaching the first dune, you begin to forge your own path, though it’s quite easy to follow the curved line of dunes toward the horizon. As you crest the first dune, the landscape transforms, and the shifting sands make you feel as if you’ve just been transported somewhere totally different. 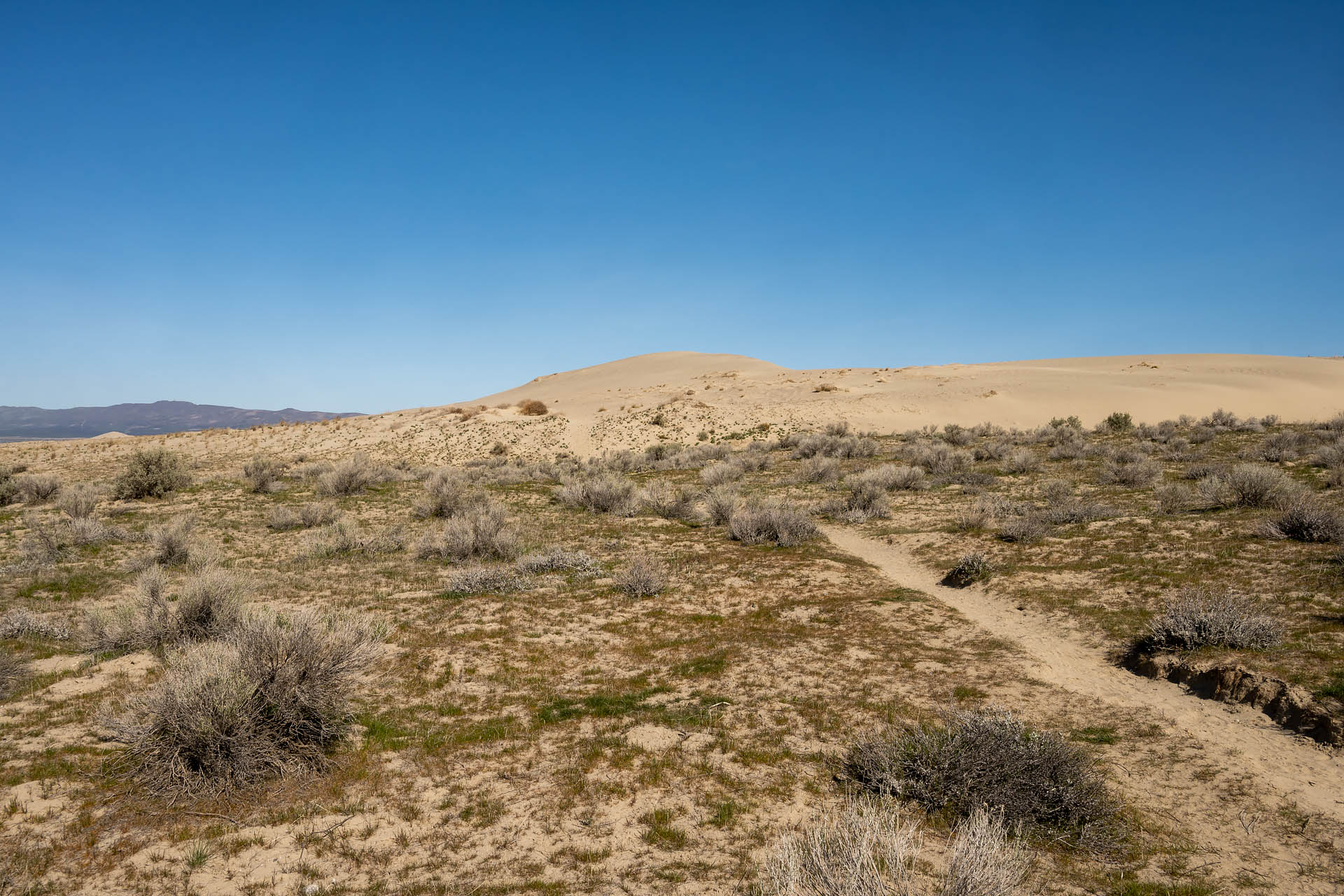 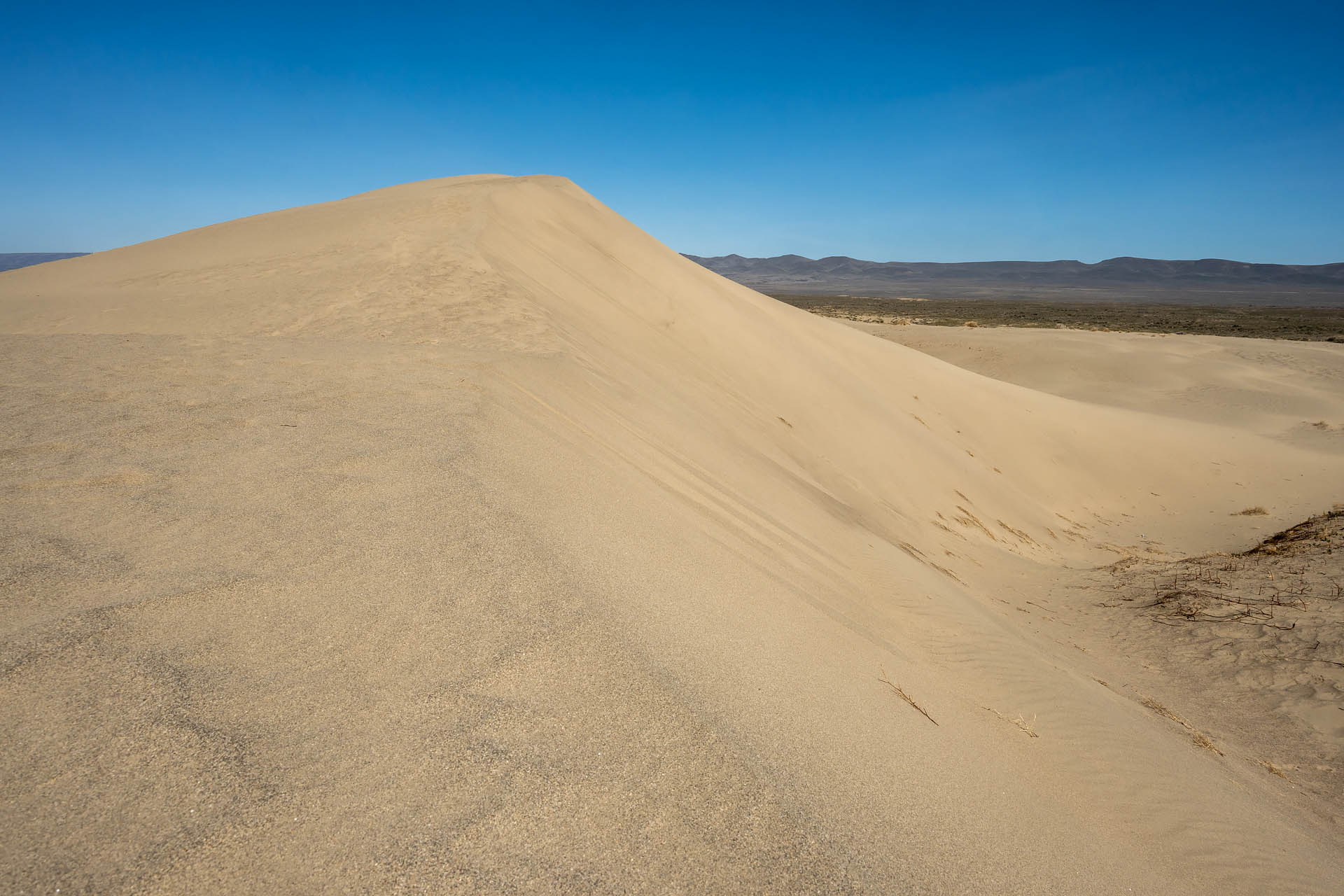 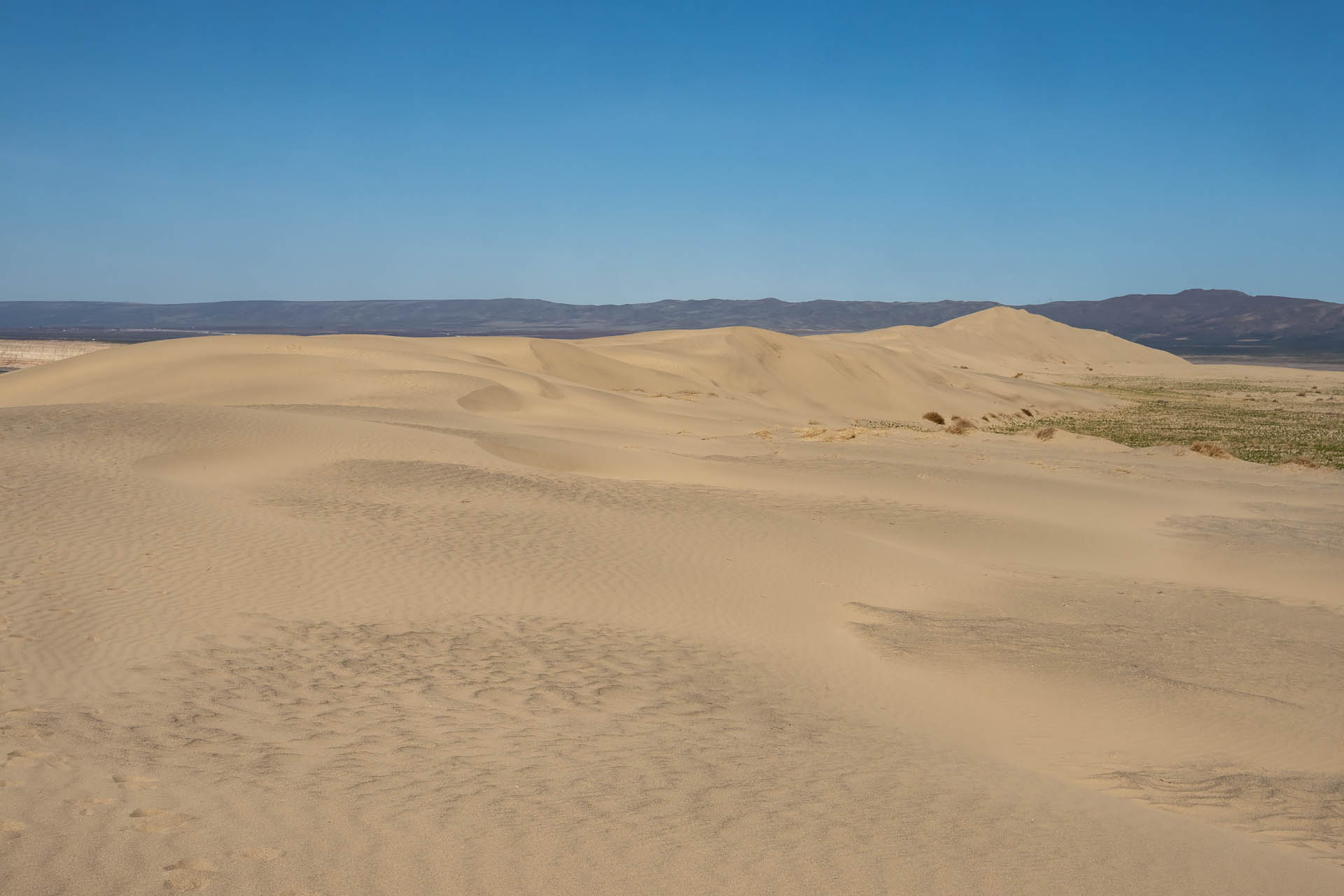 Continuing along the sculpted sands, a larger second dune follows the first, stretching for about a mile and a half and reaching a highpoint of about 725 feet above sea level. Sanchez thoroughly enjoyed scrambling through the sands, and sat atop the dune like a princess overlooking her kingdom. 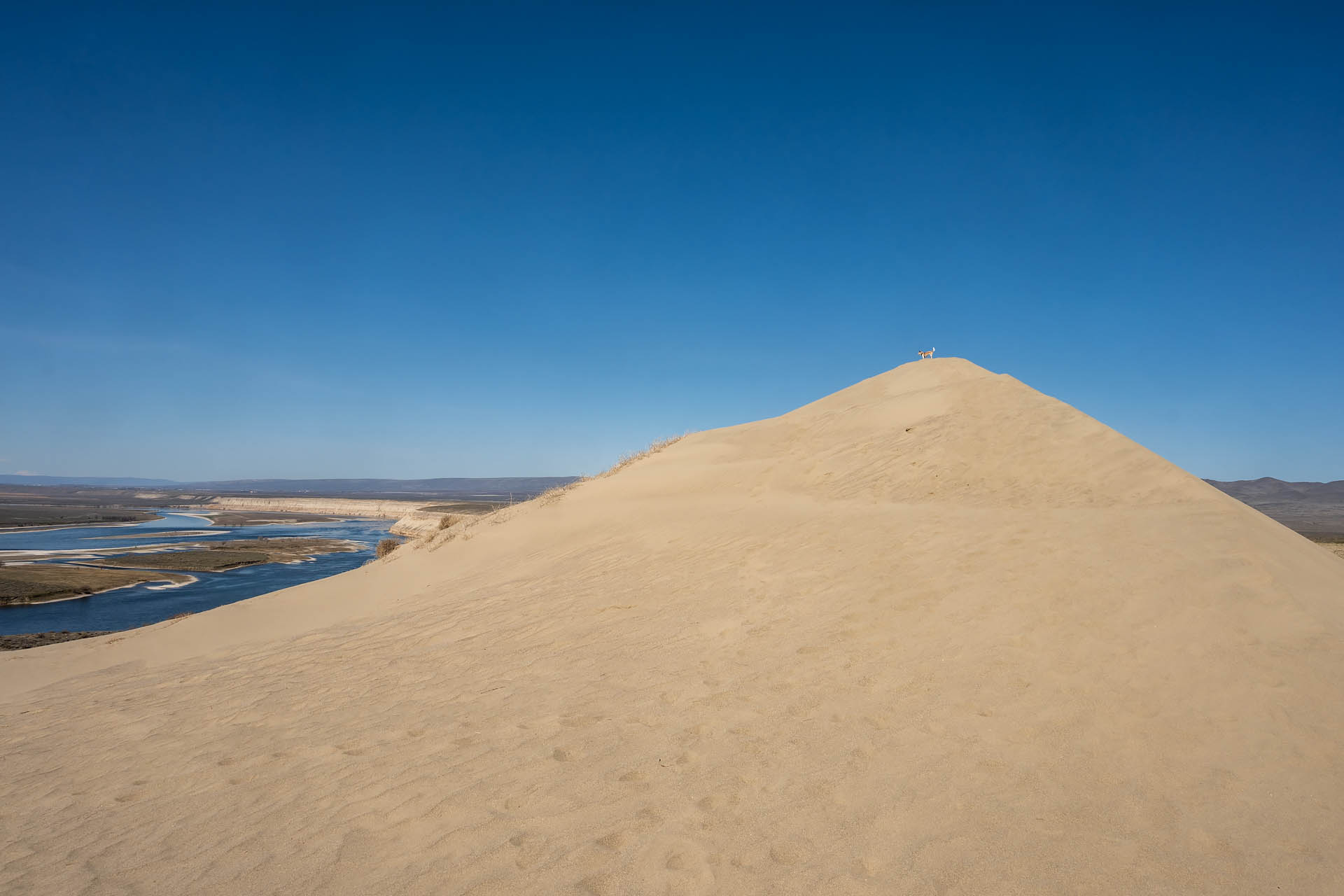 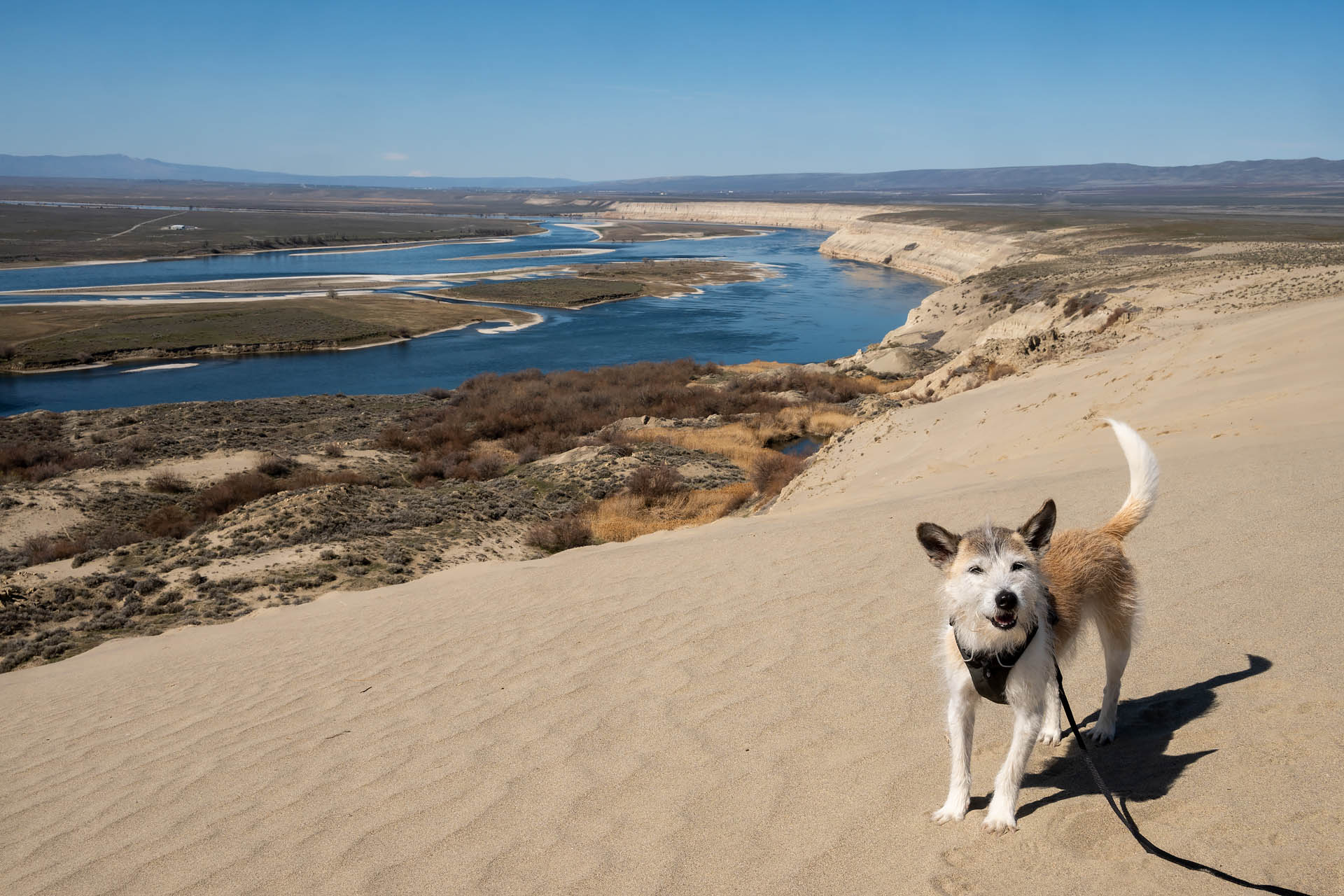 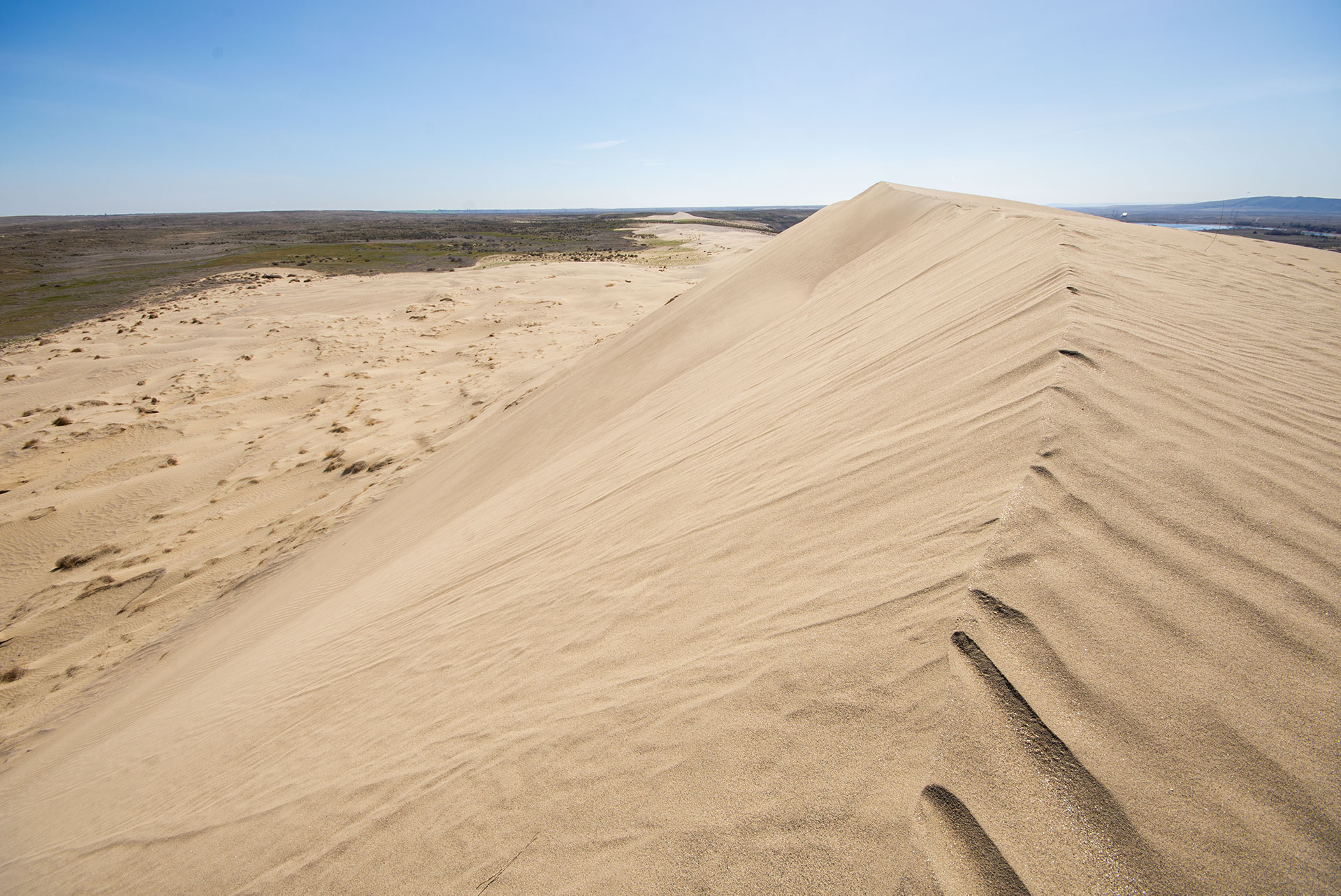 With the trail beginning to see a bit more traffic as we made our return to the trailhead, we dropped down from the dunes to, instead, follow a small footpath nearer the water’s edge. It offered a closer view of the river, and we were able to spot a few muddy tracks from some resident cranes or heron. Overall, it was definitely an interesting hike – both in terms of unexpected scenery and its distinctive place in history. If you ever find yourself in this part of the state (Richland or Yakima areas), it’s a small, but pretty cool place, to explore. 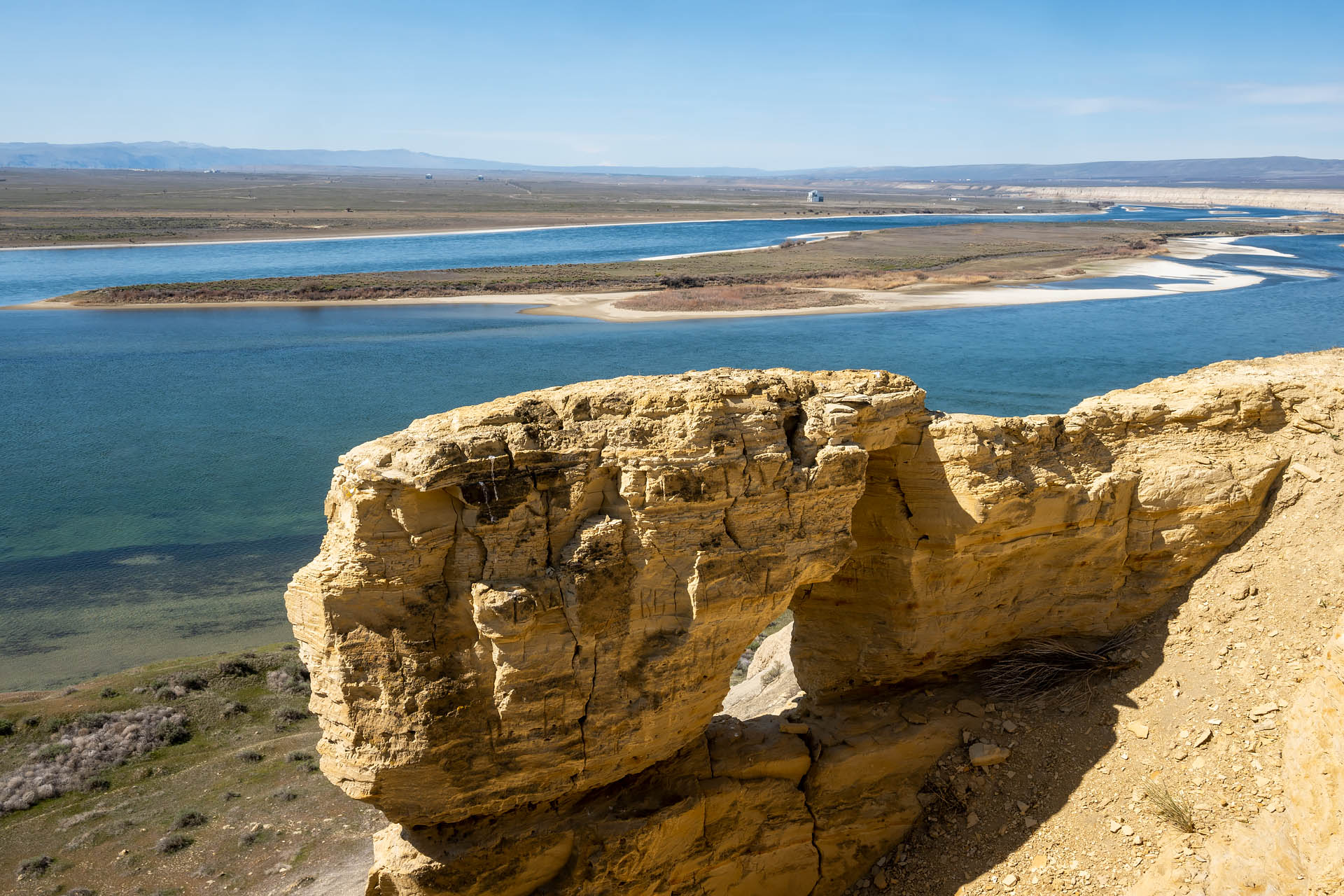 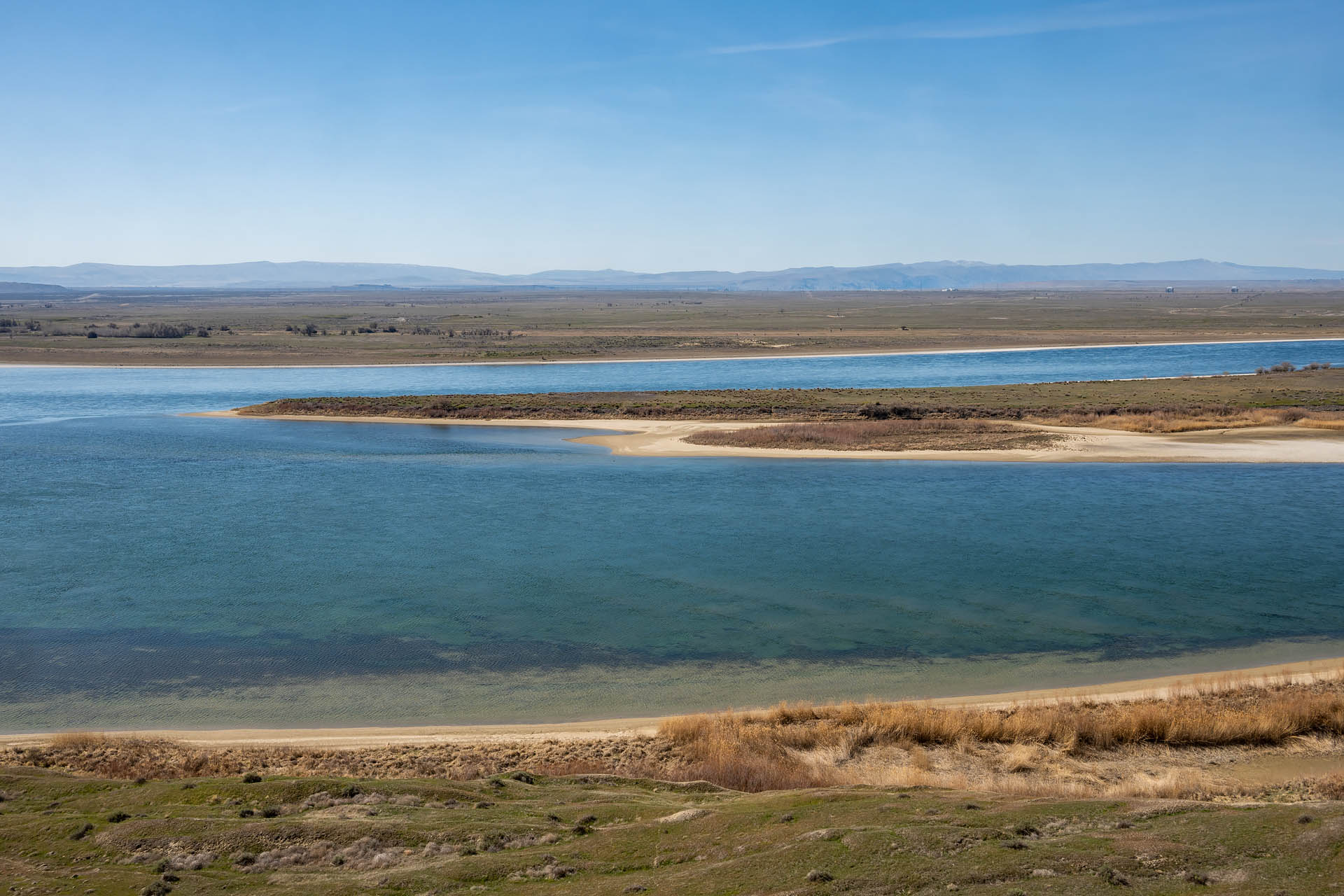 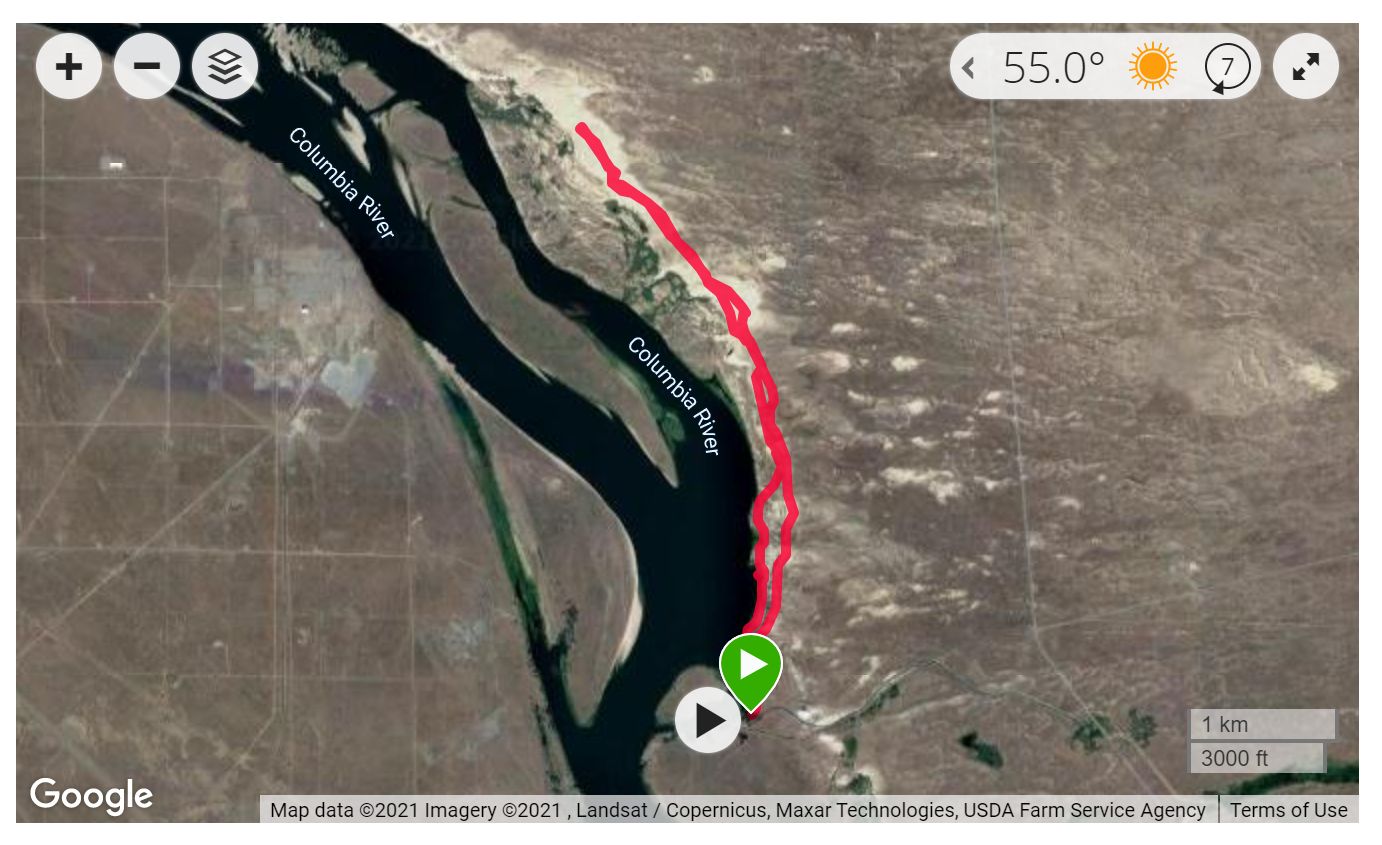