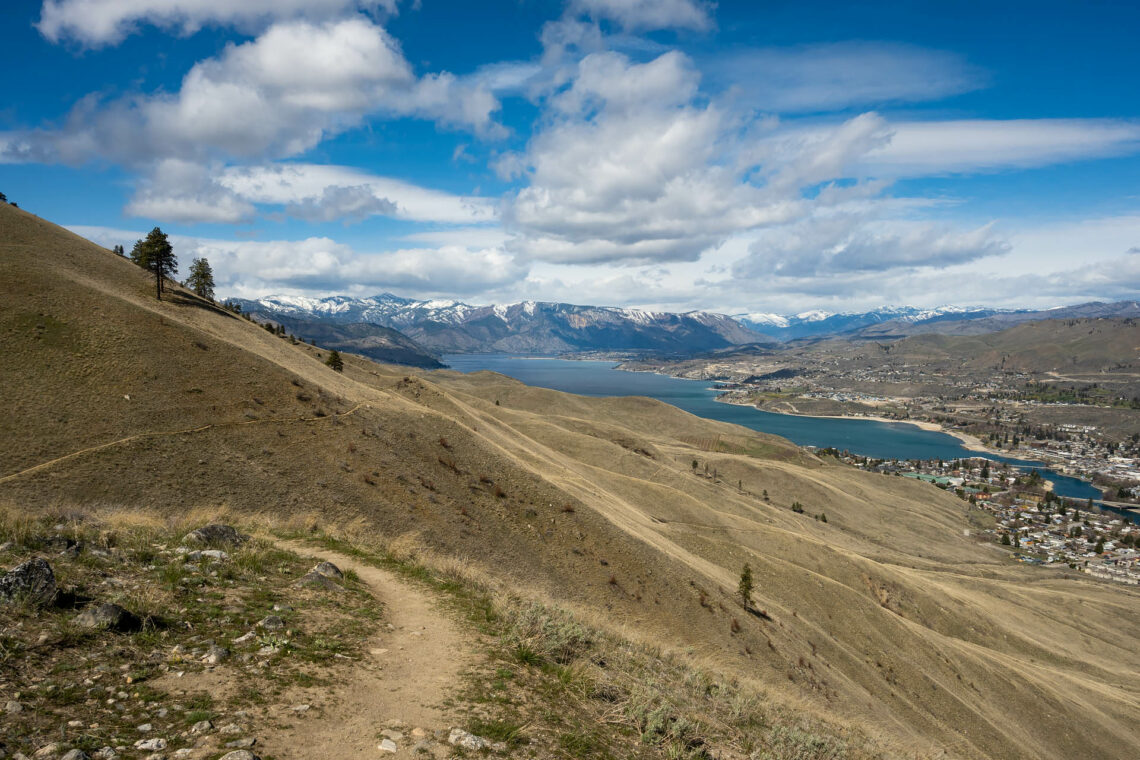 Rising between Lake Chelan and the Columbia River, Chelan Butte’s 3,835’ crest soars above the tiny town of the same name. Although it’s a low-elevation peak, it stands alone alongside the lake’s southeastern shore. Consequently, the butte offers some stunning views of the vast sapphire lake and surrounding summits of the Chelan Mountains.

At the base of the butte lies Lake Chelan – a narrow sliver of water that slices through the foothills of the North Cascades. Stretching over fifty miles and reaching depths of close to 1,500 feet, Lake Chelan is Washington’s largest and deepest natural lake. Fittingly, the word Chelan comes from the Salish tribal language meaning ‘deep water.’

For centuries, legends have been passed down about a shadowy behemoth that lurks in the mysterious depths of the secluded lake. Some say it is part alligator, part snake, with razor-sharp teeth and bat-like wings. Early indigenous tribes believed it was an evil spirit that took the form of a serpent, and tribal members were reluctant to canoe the lake’s deeper waters. Such mythical lake and river monsters are a recurring theme within folklore of the Pacific Northwest, and Lake Chelan is no exception.

One widespread legend claims that the Lake Chelan dragon was unwittingly brought to the lake by a Scottish ship captain in 1812. Carrying what he believed to be a chest full of riches, the box actually contained the egg of an unborn dragon-like serpent – possibly kin to the fabled Loch Ness monster. When a storm nearly capsized the captain’s ship, the chest was swept overboard and the egg unknowingly released into the depths of the lake. The winged lake monster reportedly resurfaced in 1892, when it viciously snatched a swimmer from the water and flew off with him. Since then, there have been various sightings over the years and, even today, the dragon still allegedly patrols the murky fathoms of Lake Chelan.

The trail up Chelan Butte begins just south of downtown near Chelan Dam. Winding for four miles to the top of the butte, there’s not much to note about the trail itself. It zigzags up an open ridge with very few trees and little shade, but with uninterrupted panoramas of Lake Chelan. At the time we hiked, the spring wildflowers were just beginning to bloom, and small clusters of balsamroot and lupine dotted the arid hillsides. Although the forecast had called for some decent cloud cover, it turned out to be an absolutely gorgeous day. 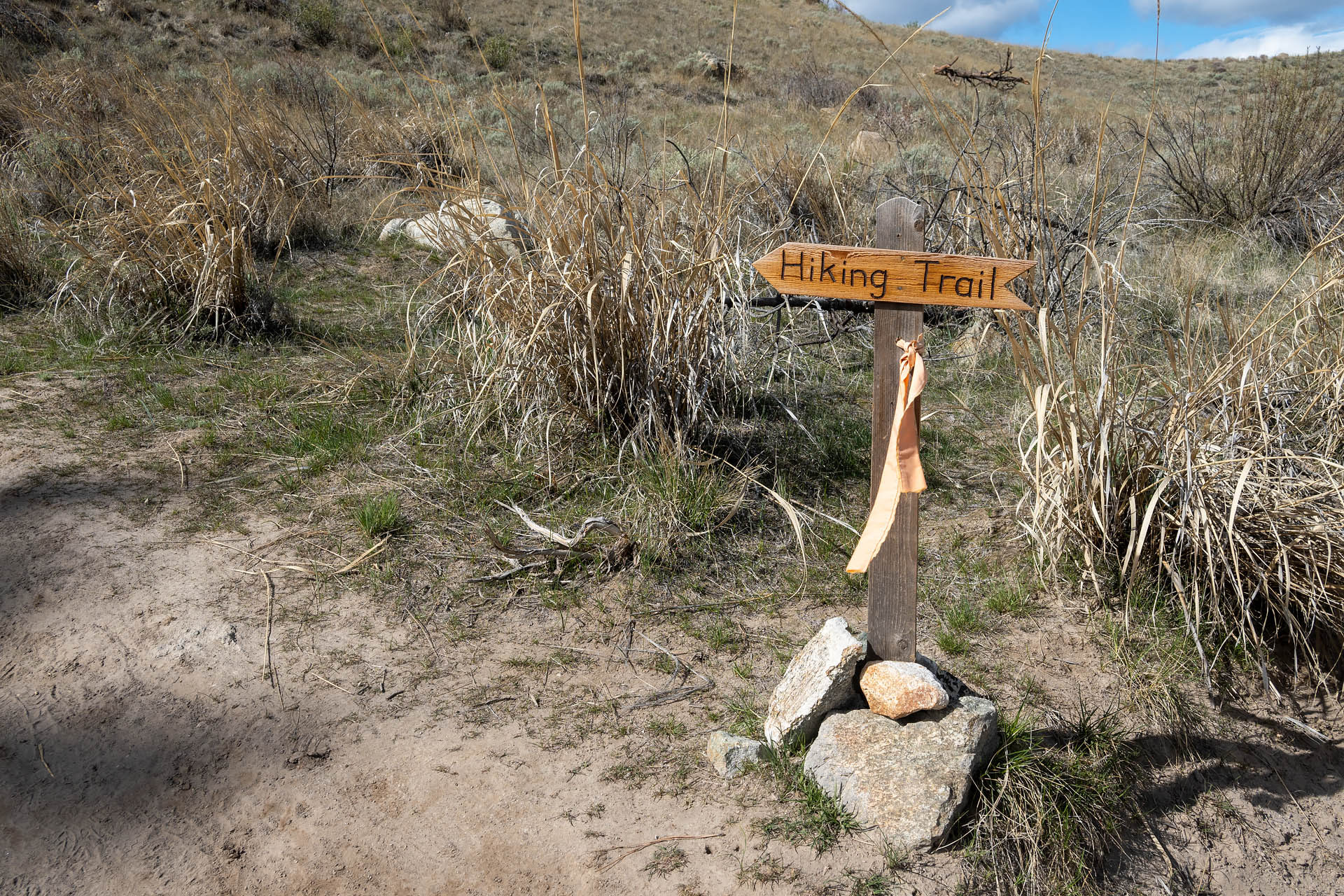 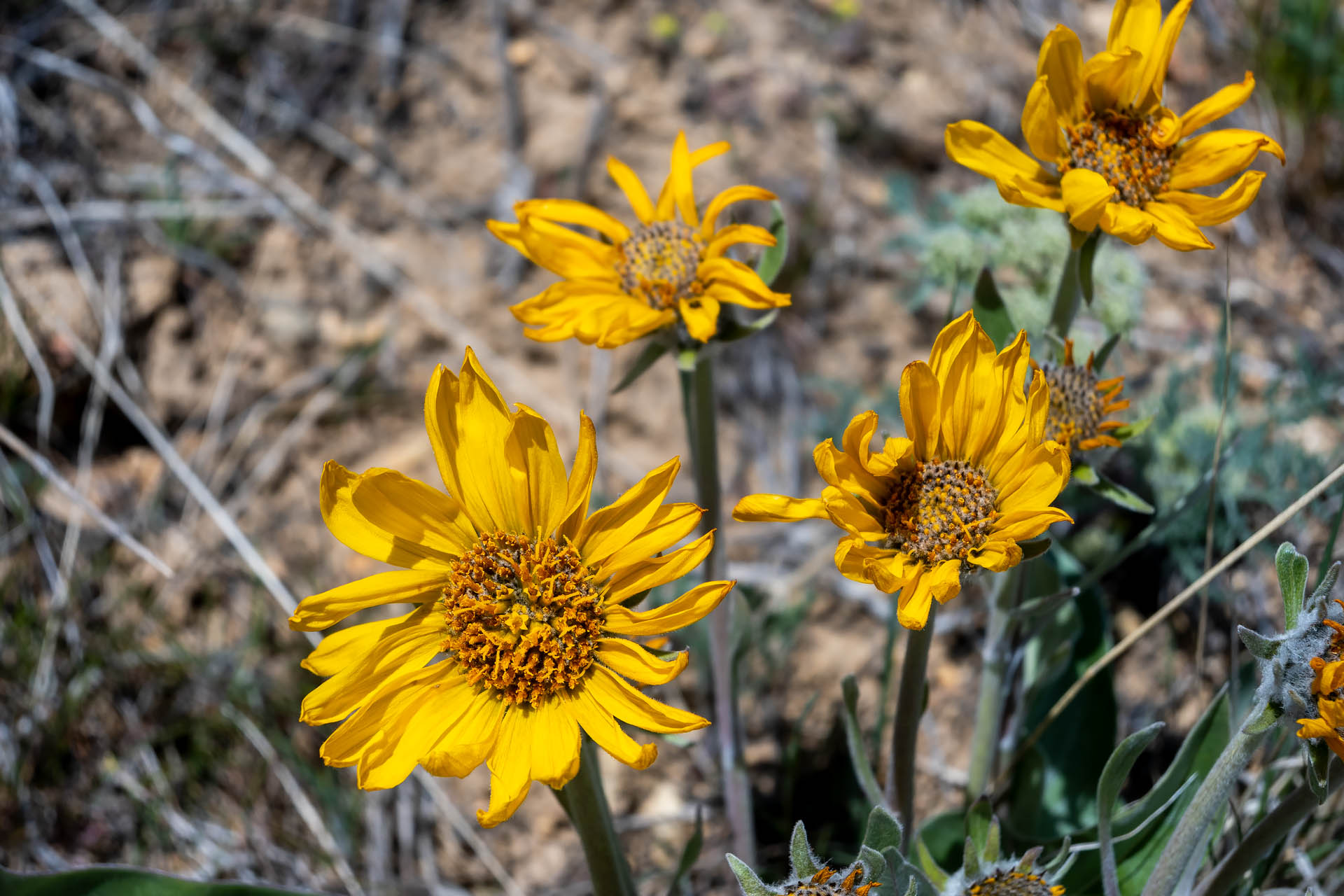 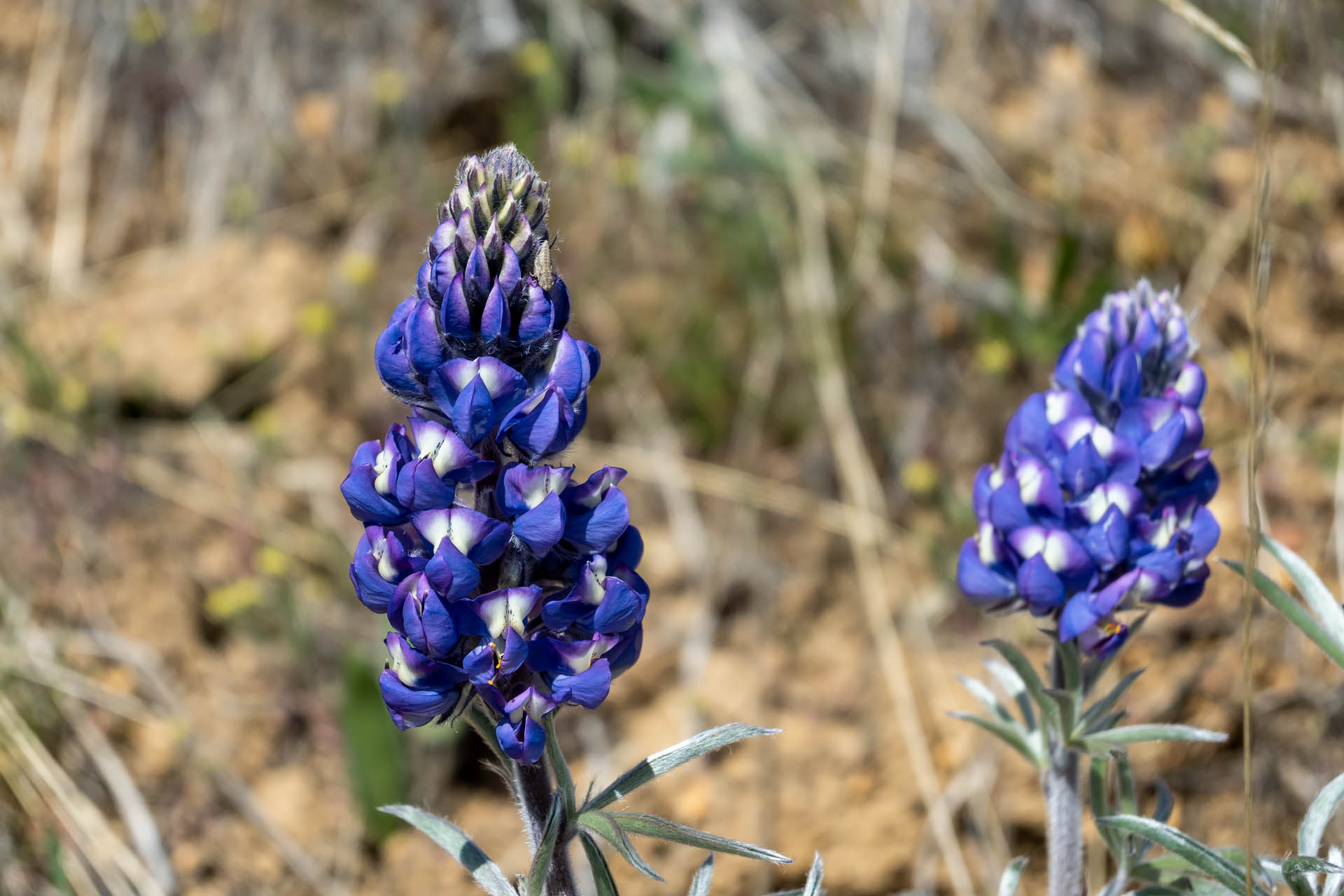 After about two miles of a gradual ascent, a small path veers off to the left toward Elephant Head – a popular stopping point on the way to the butte’s summit. The small hill may have had a stunted crest, but the views from here were about as good as they were for the rest of the hike. 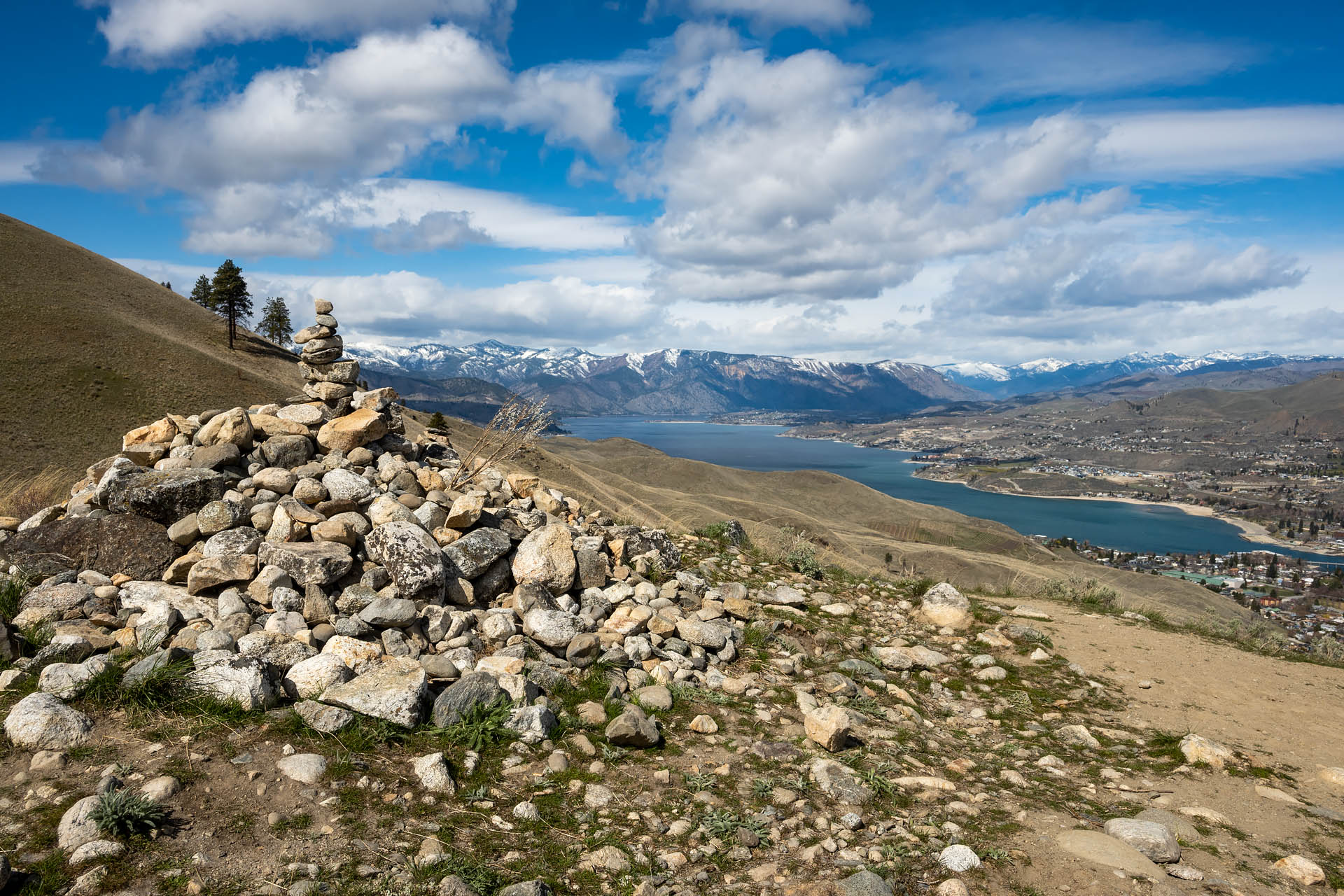 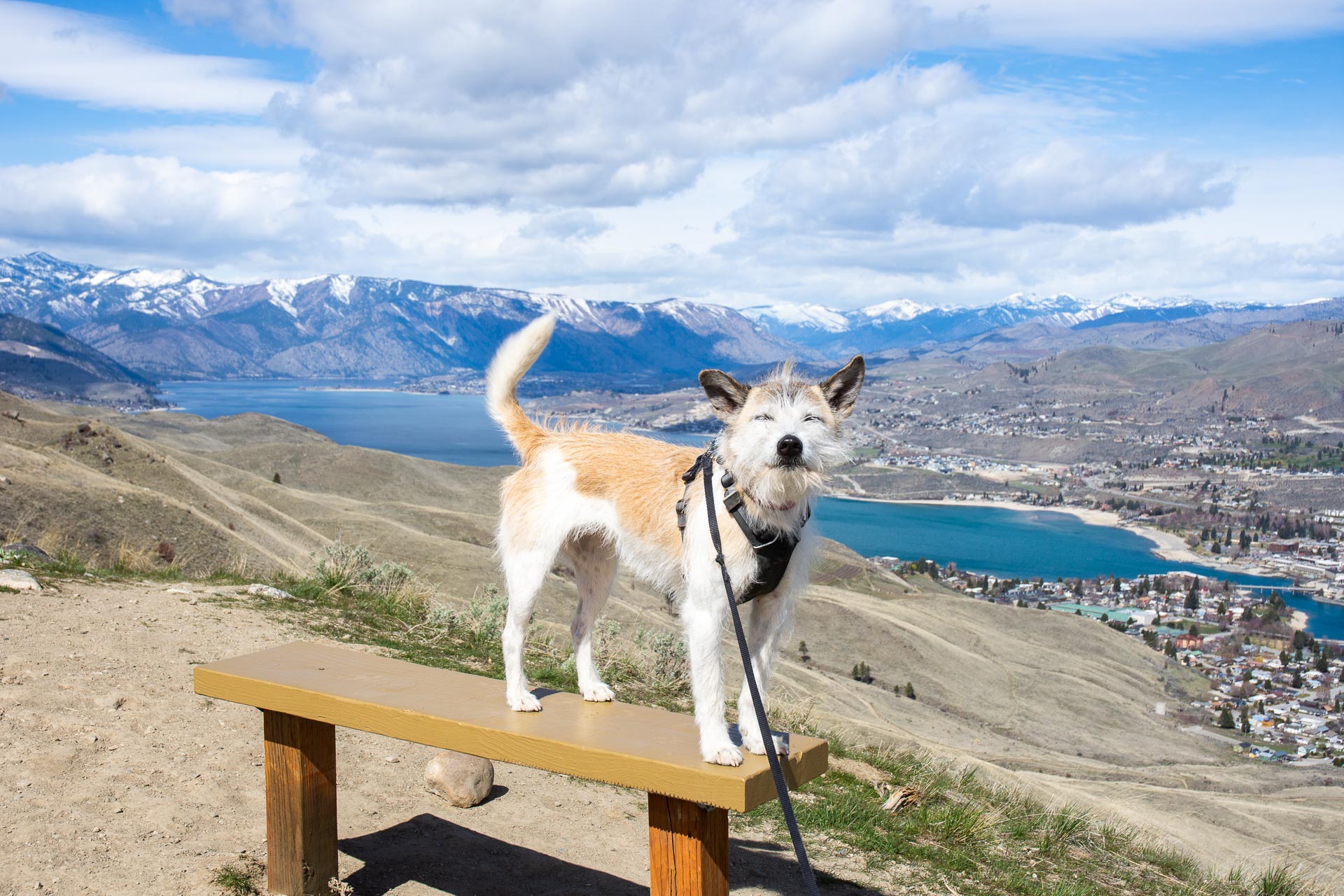 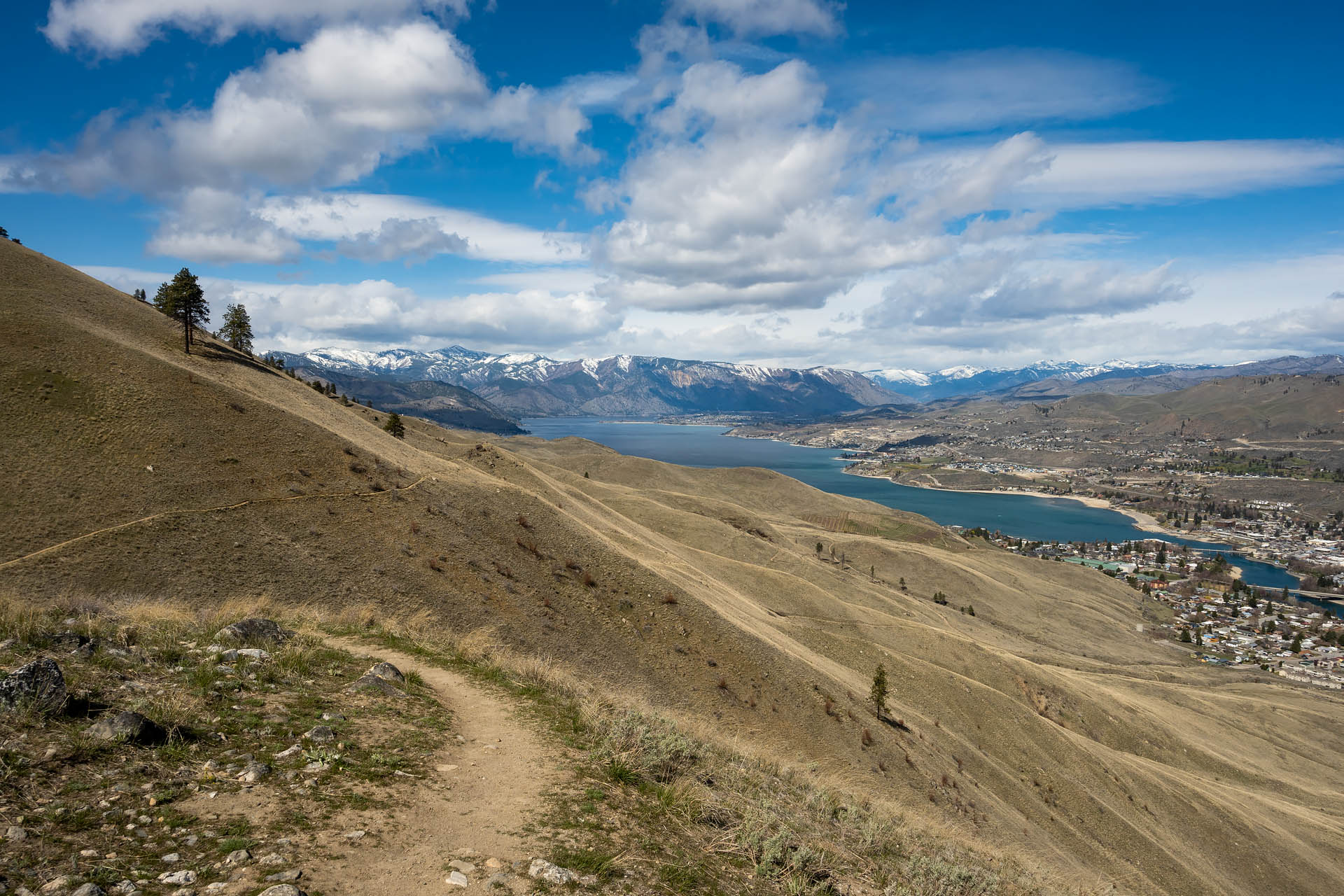 From the short spur to the viewpoint, the trail climbs another two miles and 1,700 vertical feet to the top of the butte. Several trail reviewers suggested that the second half of the trail – a steeper climb up to the radio towers – wasn’t worth the effort. While I agree the views don’t improve significantly as you make your way up, why would you not continue to the top? You get to look out at a seriously beautiful lake the entire way, and it’s time outside on the trail. It did feel like a bit of a slog at times, but the views remained impressive. 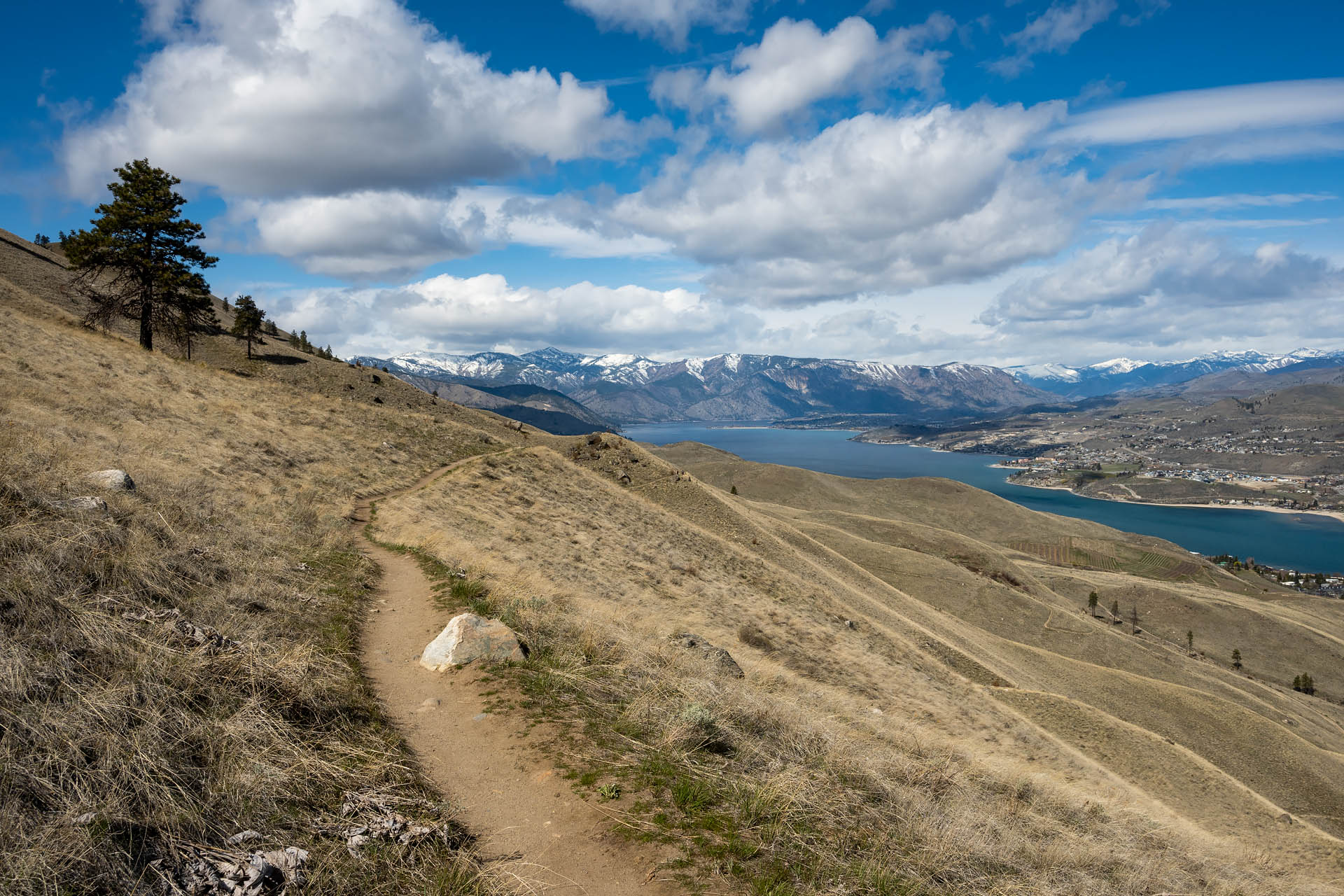 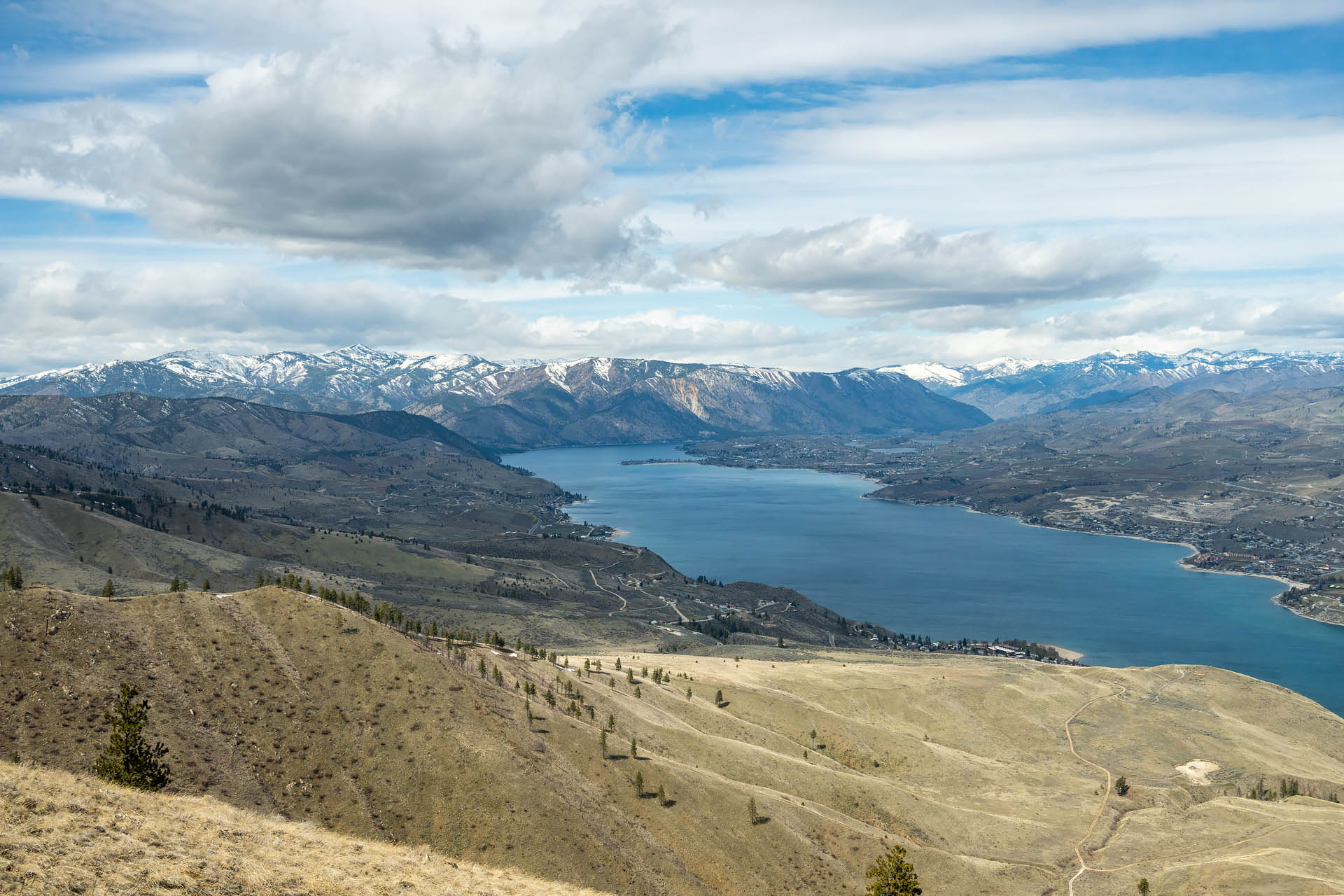 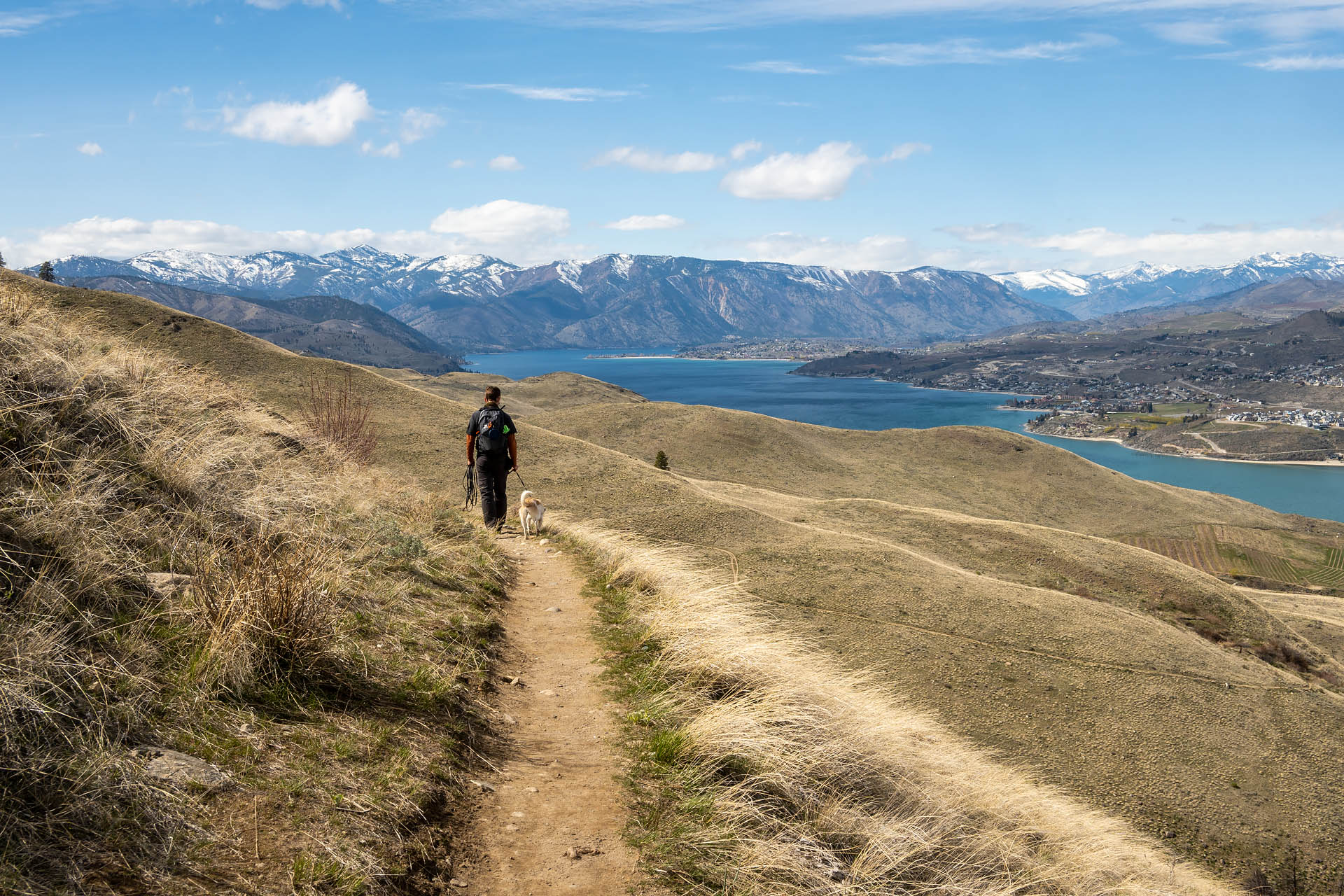 The only part of the hike that was less than ideal was the wind. Stephan didn’t have his anemometer on him, but the gusts near the top were howling. Sanchez was completely windblown a few times and made it quite clear that she was totally unimpressed. At one point we tried to get her to pause for a photo, but she was too uncomfortable with the blustery bursts. However, when we passed the same pile of rocks on the way down, the wind had temporarily subsided and Sanchez took it upon herself to pose for a retake. The little beggar will thoughtfully devise any plan for a cookie, but her crafty wit and exceptional memory never cease to entertain us. 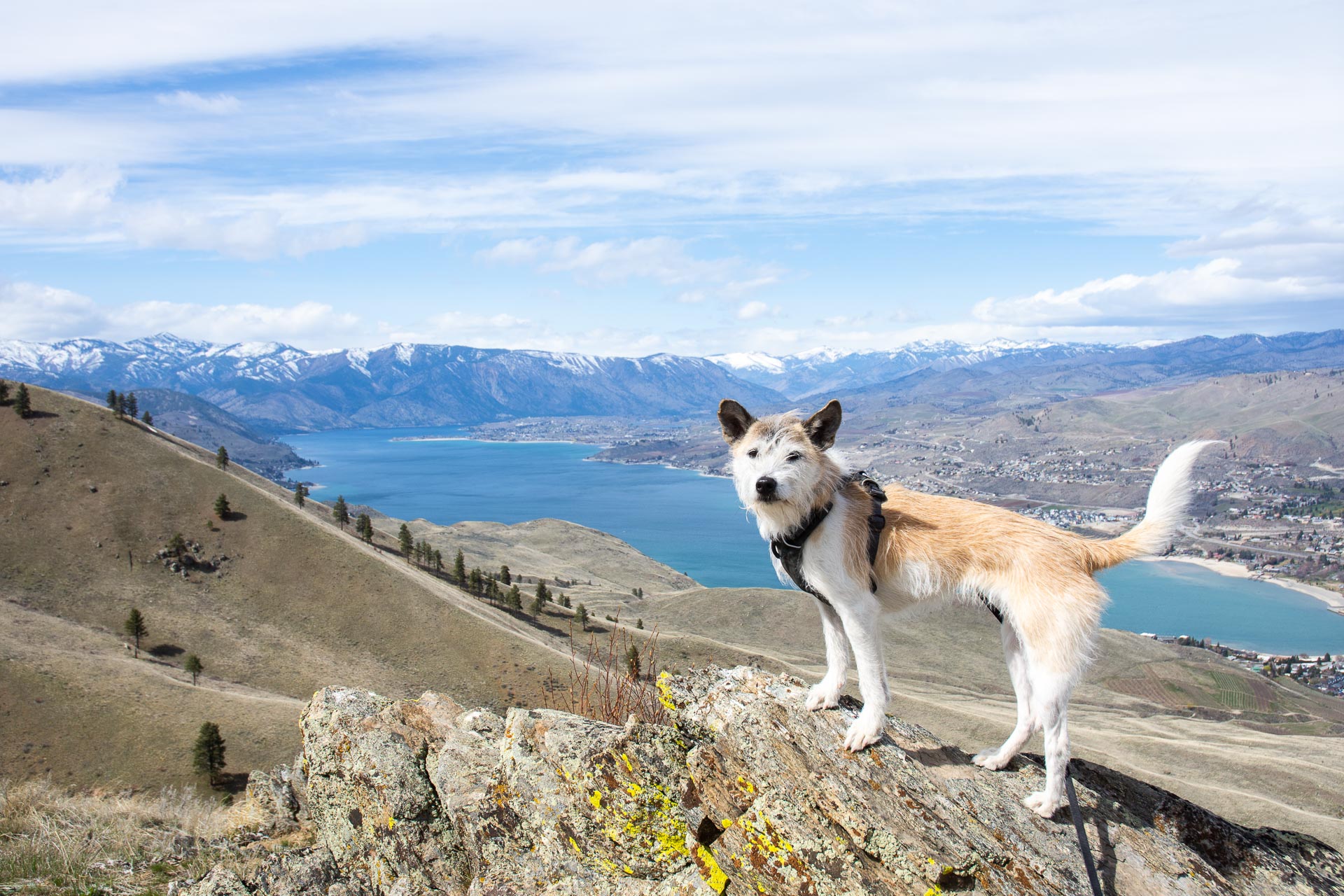 Seeing as it was just an hour north of Leavenworth, we were pretty stoked to find this route. Being the first weekend in April, all of the high-elevation trails were still well buried in ice and snow. This was the perfect trail to enjoy some scenery and vertical gain without the wintry conditions. Moreover, the lake was gorgeous, and we wouldn’t mind making another trip up in the future for some more exploring. 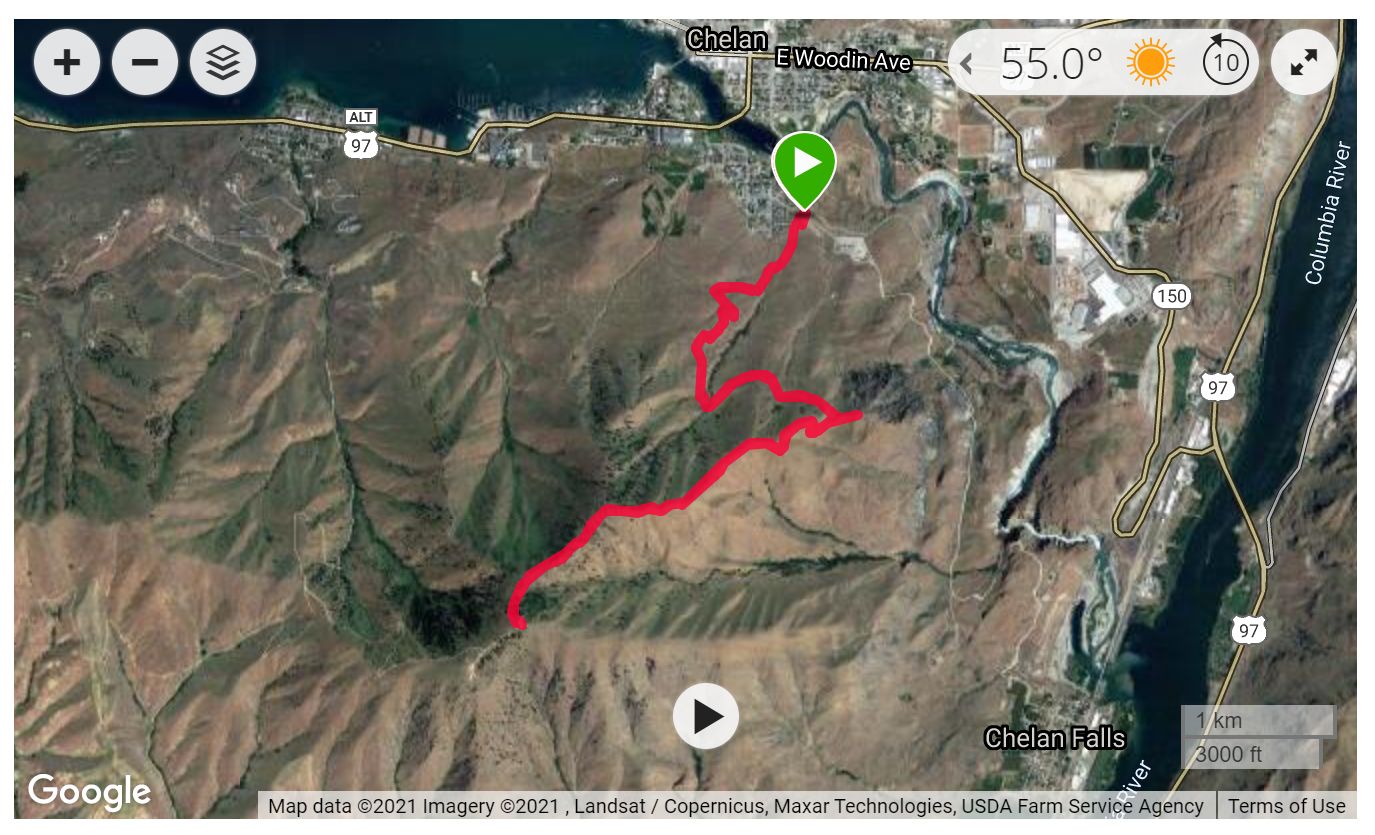 If you are short on time or just don’t feel like making the extra push to the top of the butte, Elephant Head offers a very nice view of the lake. Follow the same trail that heads toward Chelan Butte (it’s signed). After about two miles, you’ll reach a junction. Take a left and follow the short path to the top of the hill. The roundtrip hike to Elephant Head is just over four miles with about 1,100’ of vertical gain. 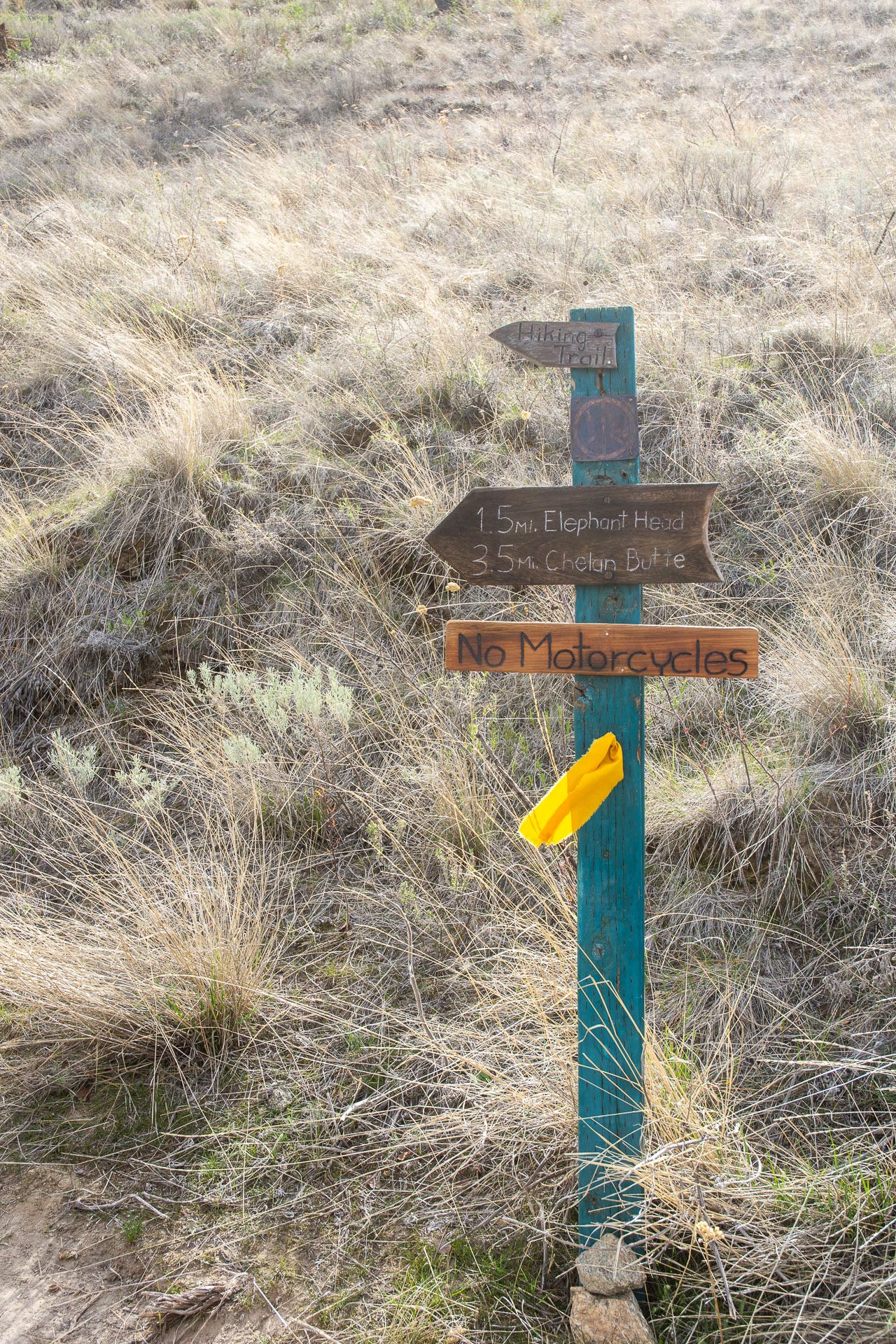