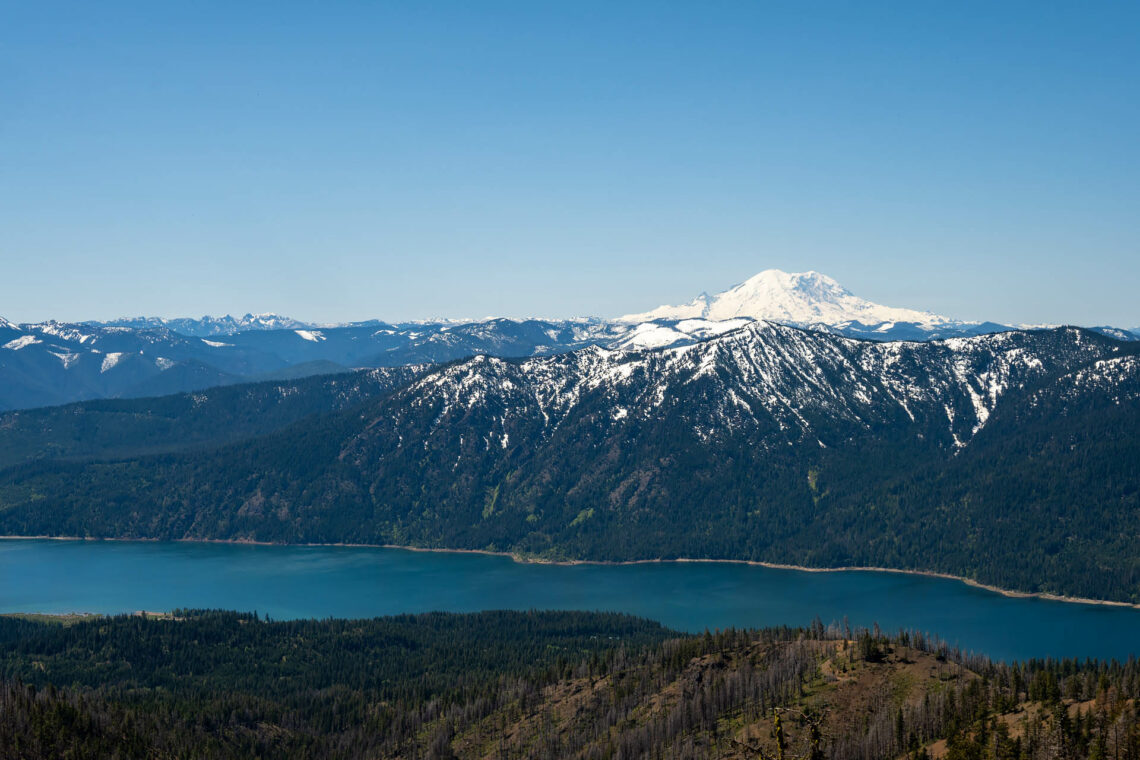 Hex Mountain is a 5,034’ peak just outside the small town of Cle Elum. It sits along the eastern shore of Cle Elum Lake with an easily-accessible trailhead just off Salmon La Sac Rd (WA-903). The 7-mile out-and-back follows a gated-off service road for the first half of the hike before eventually giving way to a true forest trail (#1343)1. A decent little spring hike, the summit offers some nice views of Cle Elum Lake, Mt. Rainier, and the rugged ridgeline of The Enchantments.

Before reading on, we want to reiterate that this is meant to be hiked as an out-and-back. We attempted to make a loop out of the trail via an alternate trail (#1340, per the Okanogan-Wenatchee National Forest, plus an unnamed connector shown on the Gaia GPS app). While we were ultimately successful, there is in fact no connector trail to close out the loop… more on this later.

The first half of the hike is largely unexciting. It’s a pretty gradual climb up Forest Service Road 116 with not much in the way of either views or shade. After 1.8 miles, the road finally reaches the Hex Mountain Trail #1343, which continues for another 1.6 miles to the summit.

After turning onto the actual trail from the service road, the hike improved significantly. As we passed through swaths of wildflower-laden forests, we were treated to the sounds of songbirds resounding from high atop the canopy. The hike steepens along this spur trail, gaining about twice the vertical feet of the first half over slightly less distance. When we hiked in mid-May, the trail was in really great shape, with just a few swaths of lingering snow in the shaded sections nearest the summit. 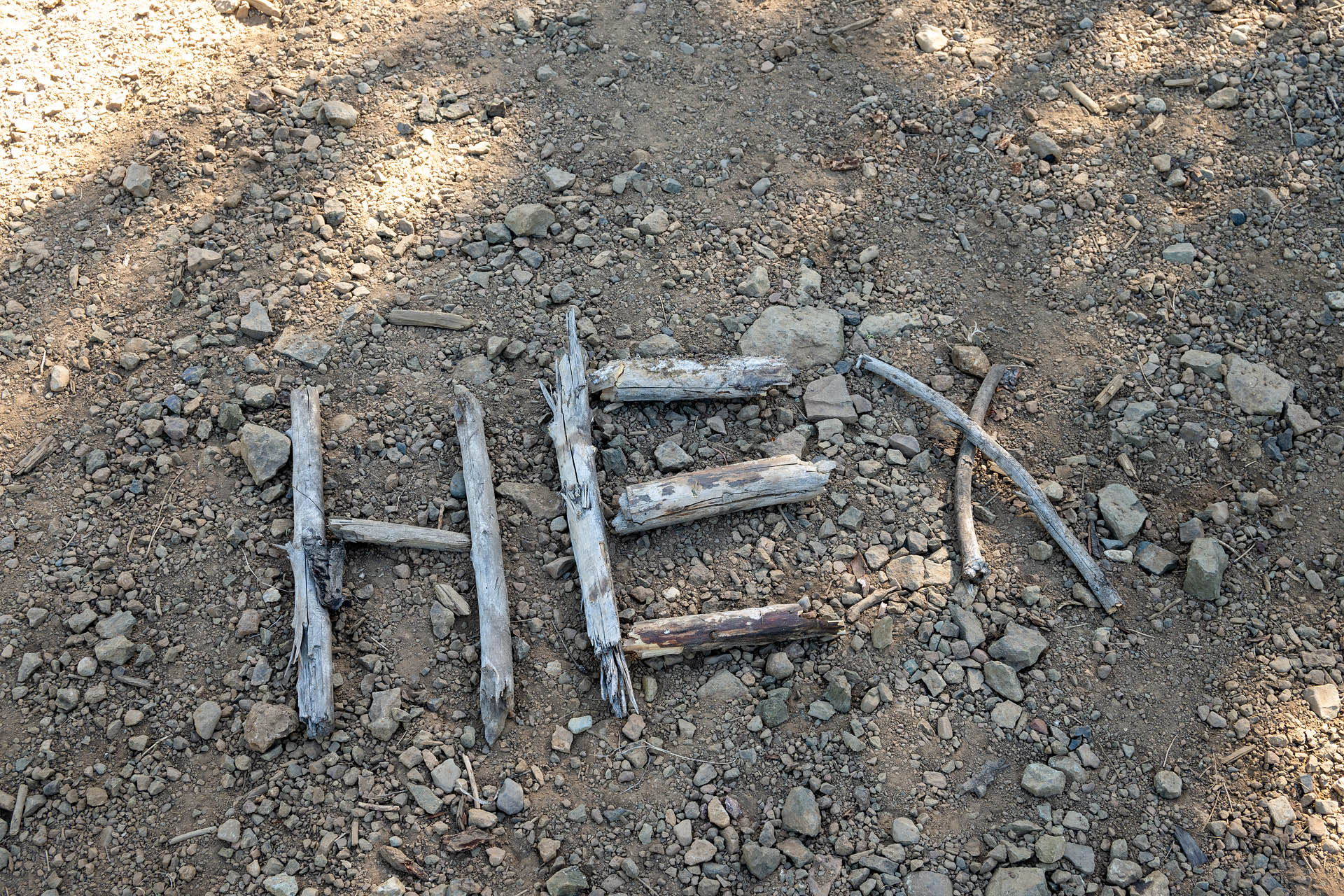 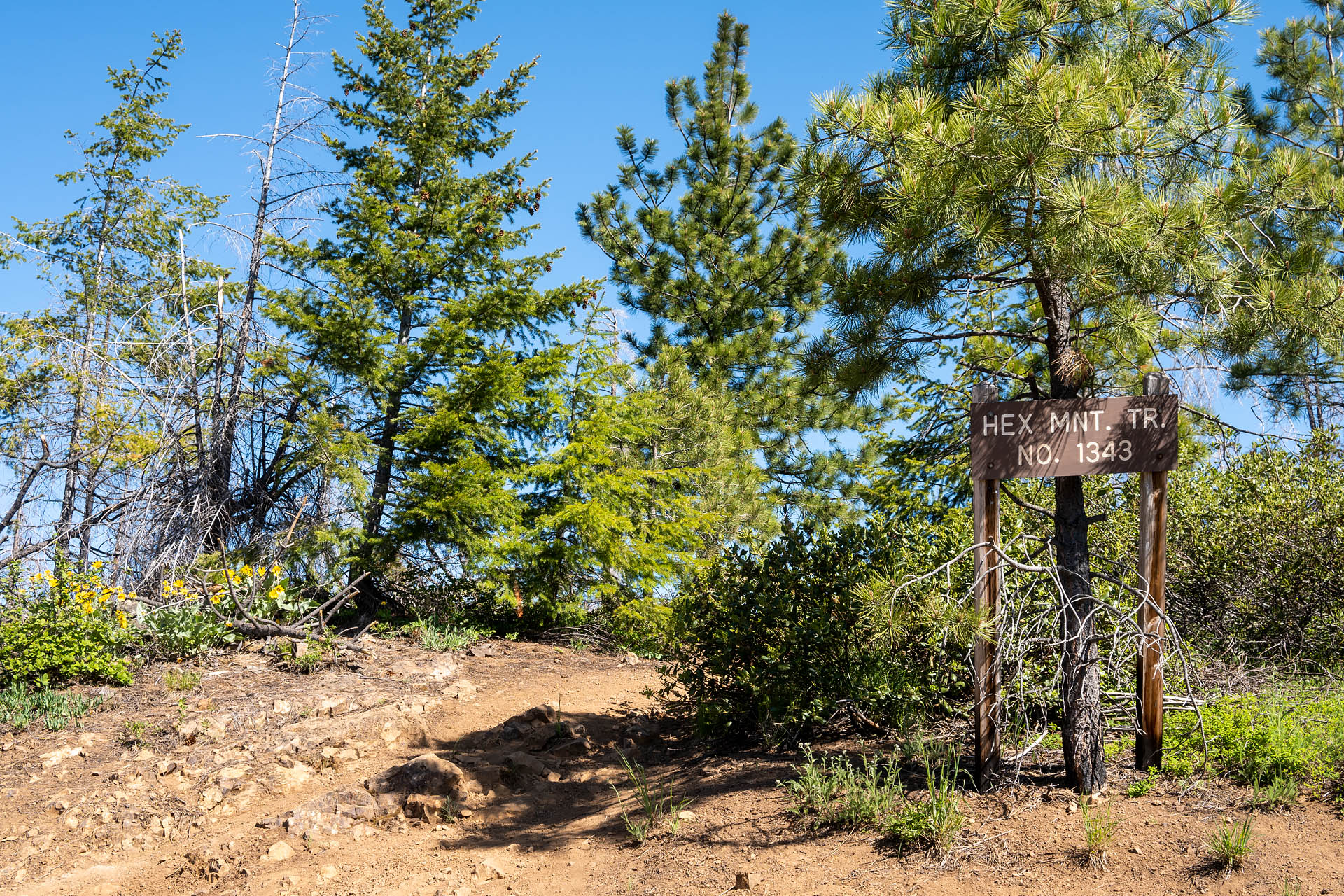 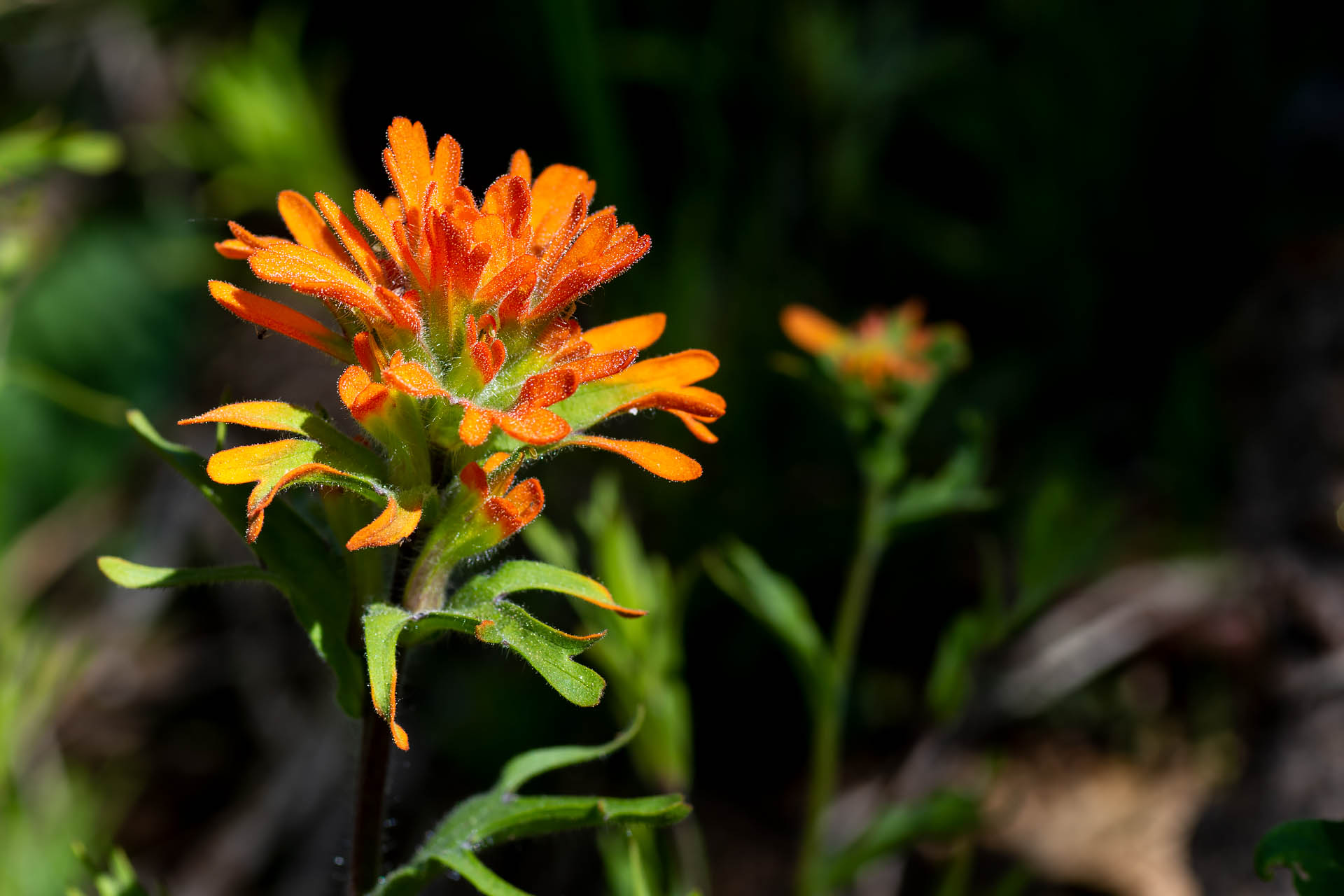 About a tenth of a mile before the highpoint, the trail abruptly pops out of the forest and follows a dusty path up the barren knob that is Hex Mountain’s summit. Amongst all the rocks and scree, delicate yellow bells (yellow fritillary) were in bloom, seeming to signal the arrival of spring atop the windswept peak. Looking to the southwest, Mt. Rainier punctuated the skyline behind Cle Elum Lake. To the northeast, we got a beautiful look at Mount Stuart – the highest peak of the Stuart Range at 9,209 feet. 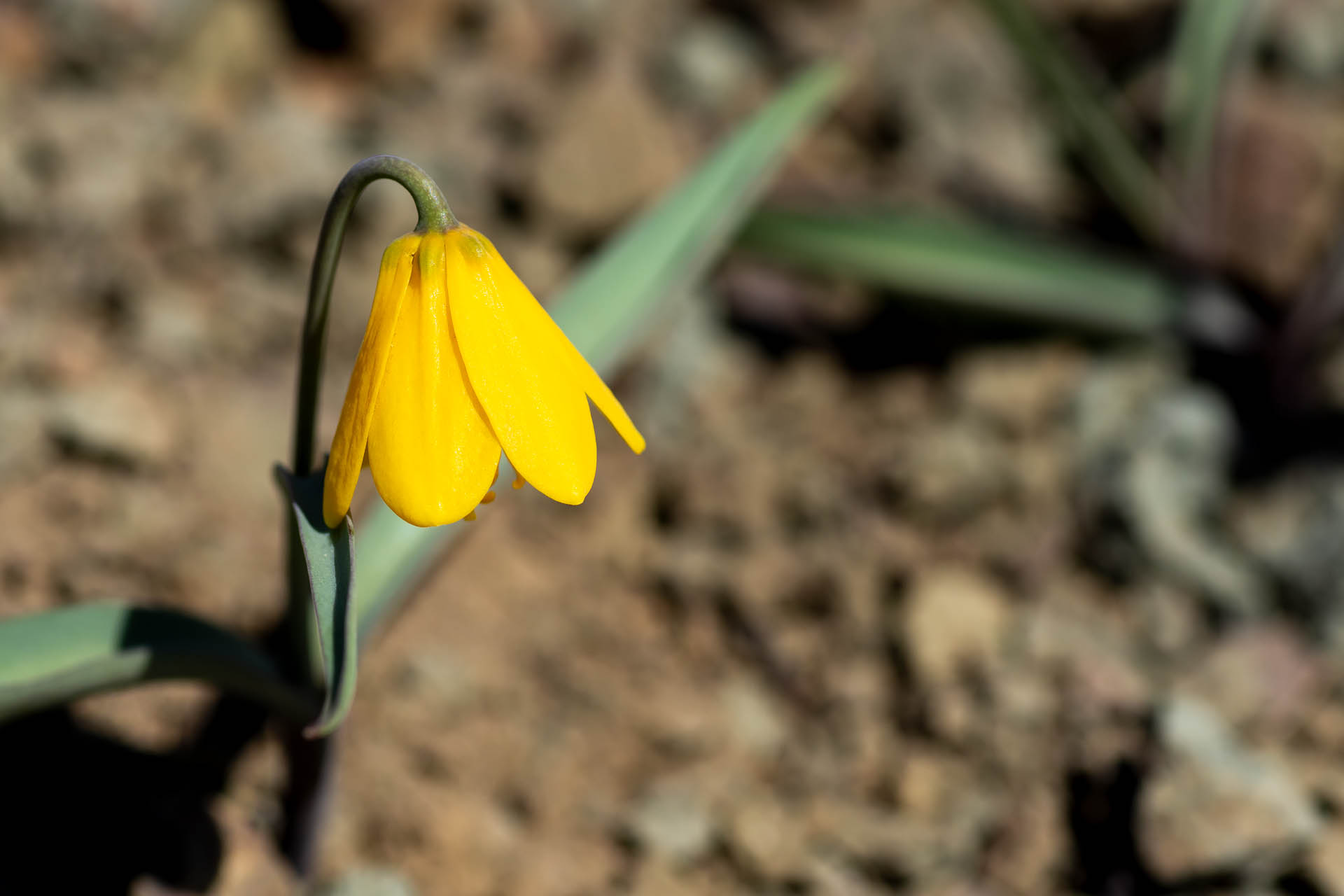 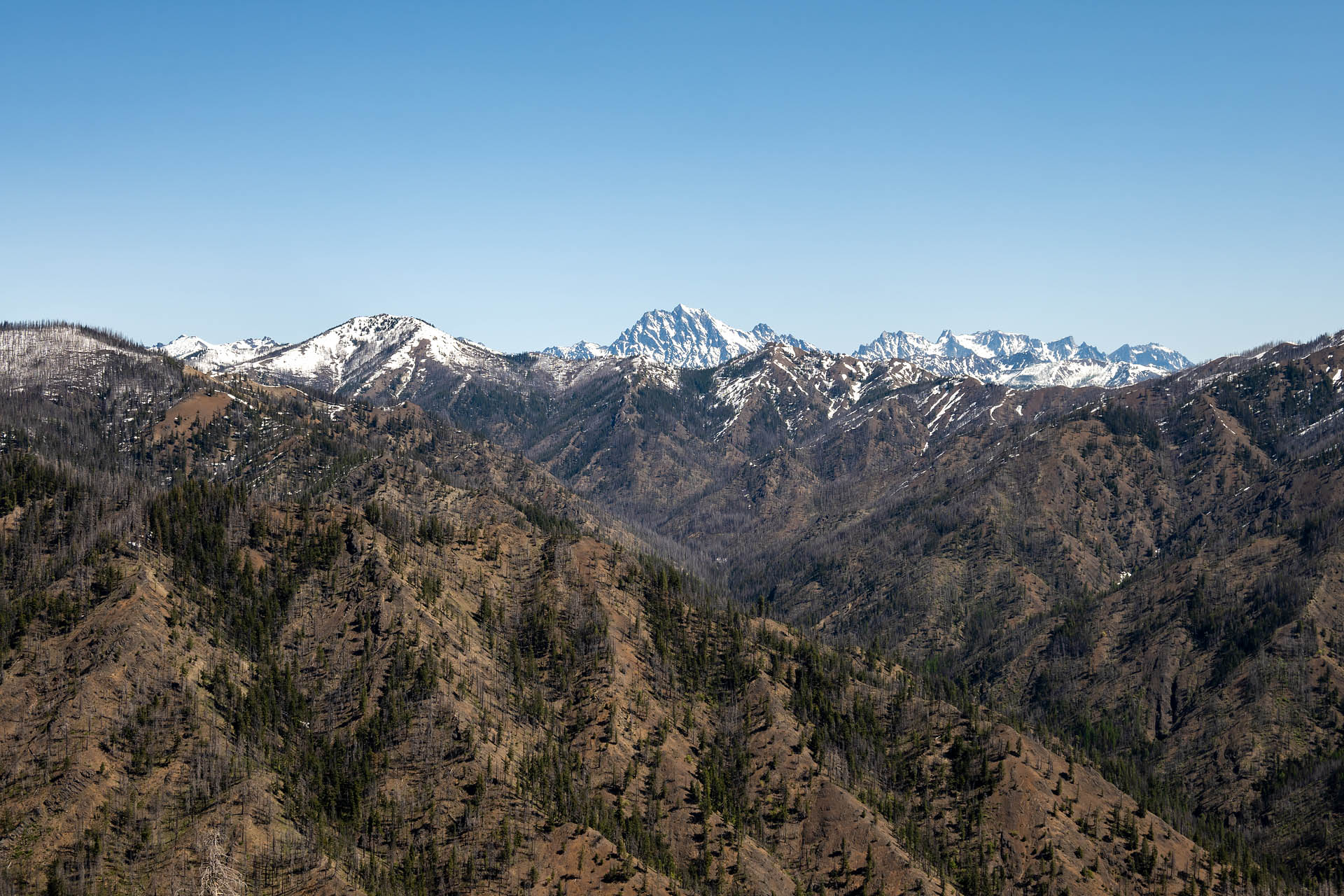 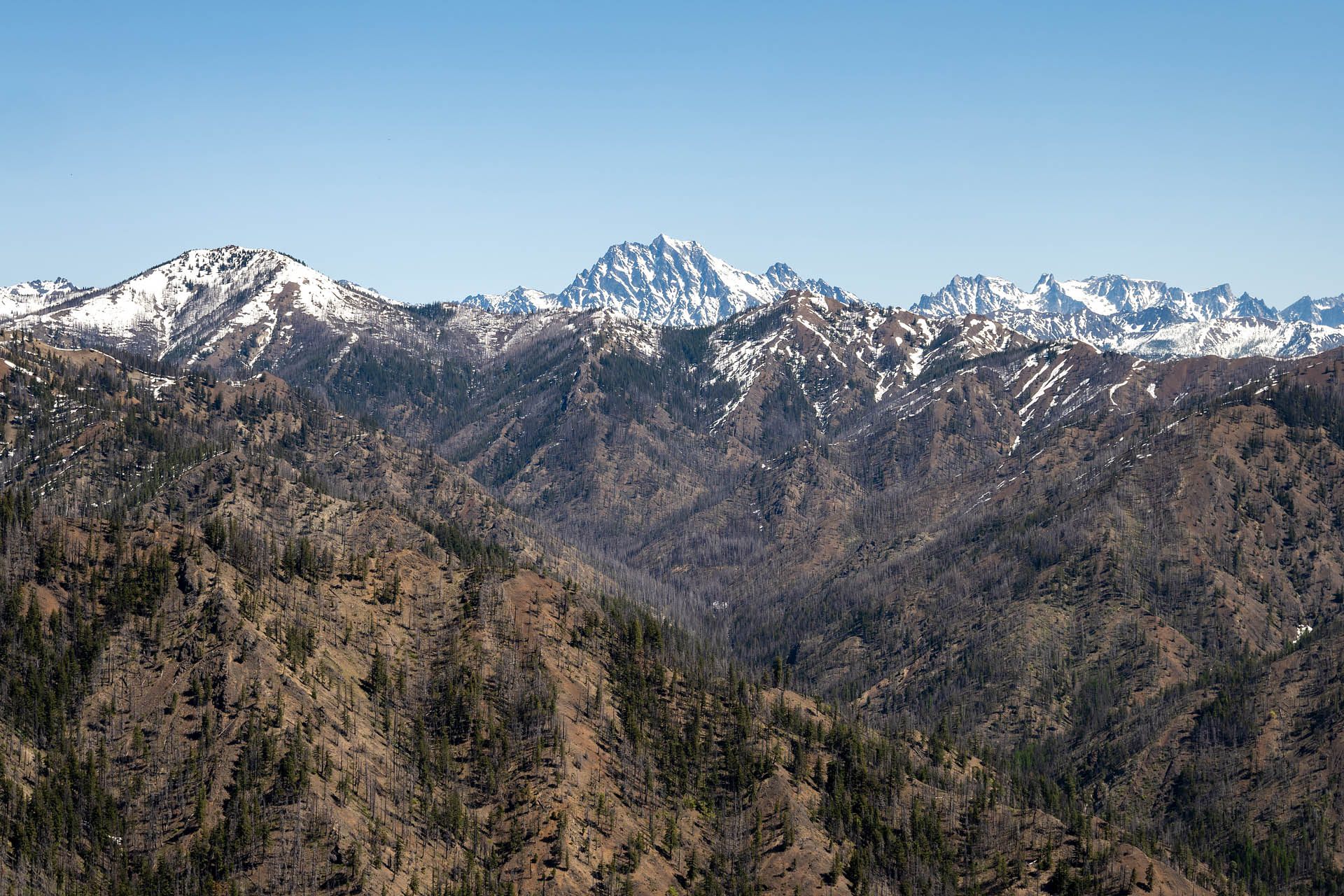 From Hex Mountain, a narrow trail traverses the ridgeline for about 0.2 miles to a slightly shorter knob (obvious from Hex’s summit). It was a stunning afternoon, so we wandered over there to check out the view before getting ready to head back down. As expected, the vistas were slightly better from this small bald, as there was no forest to partially obscure the view of the lake. 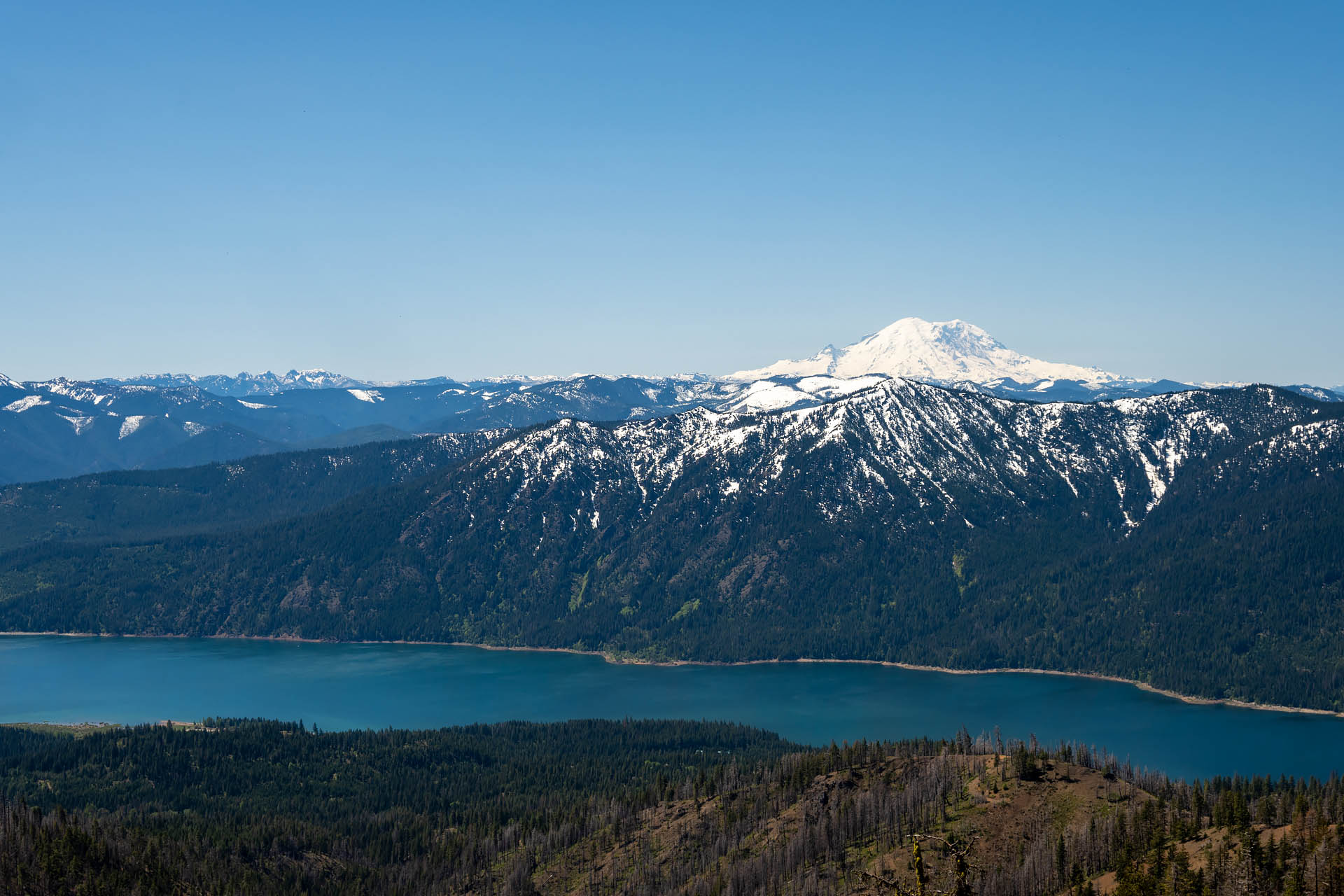 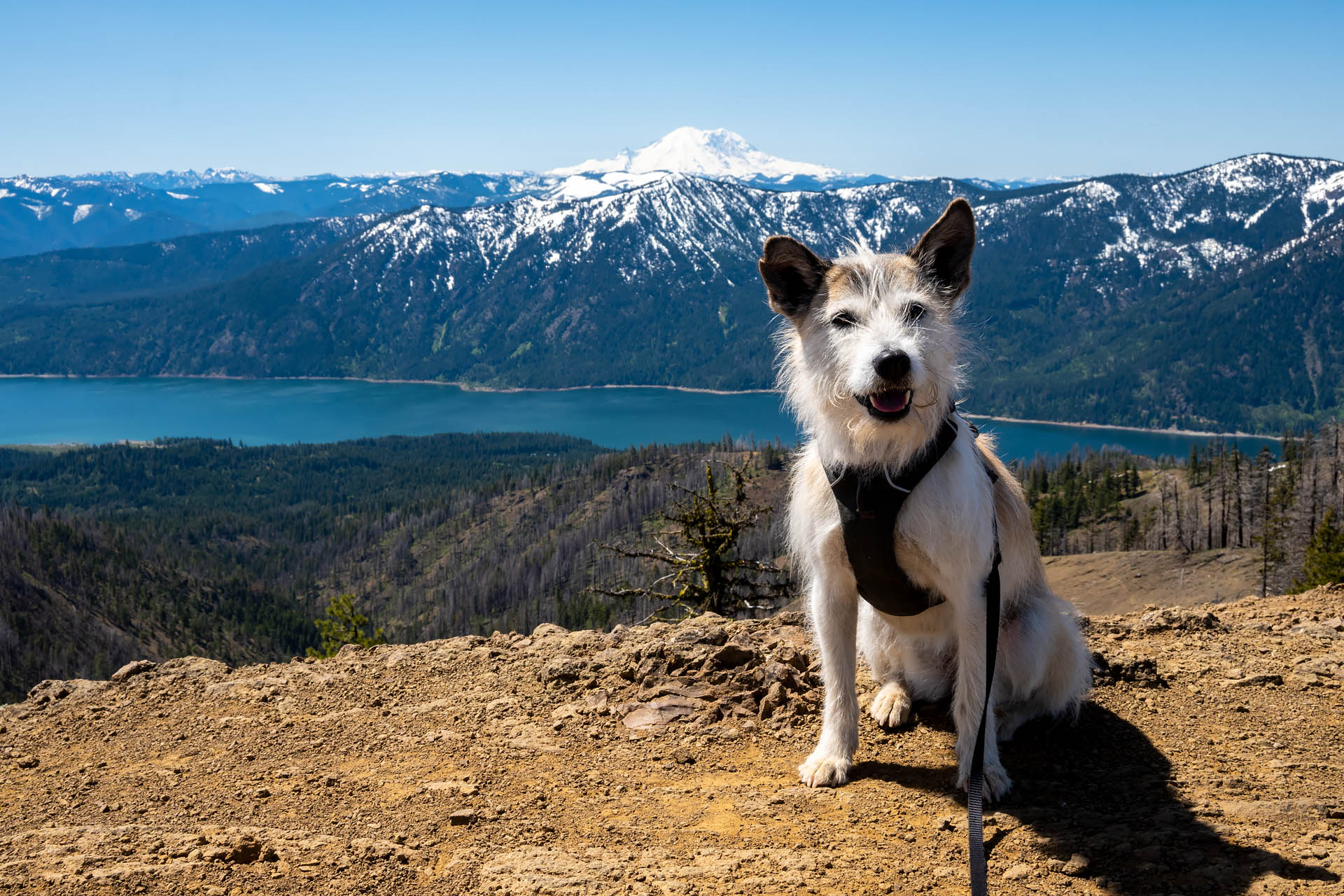 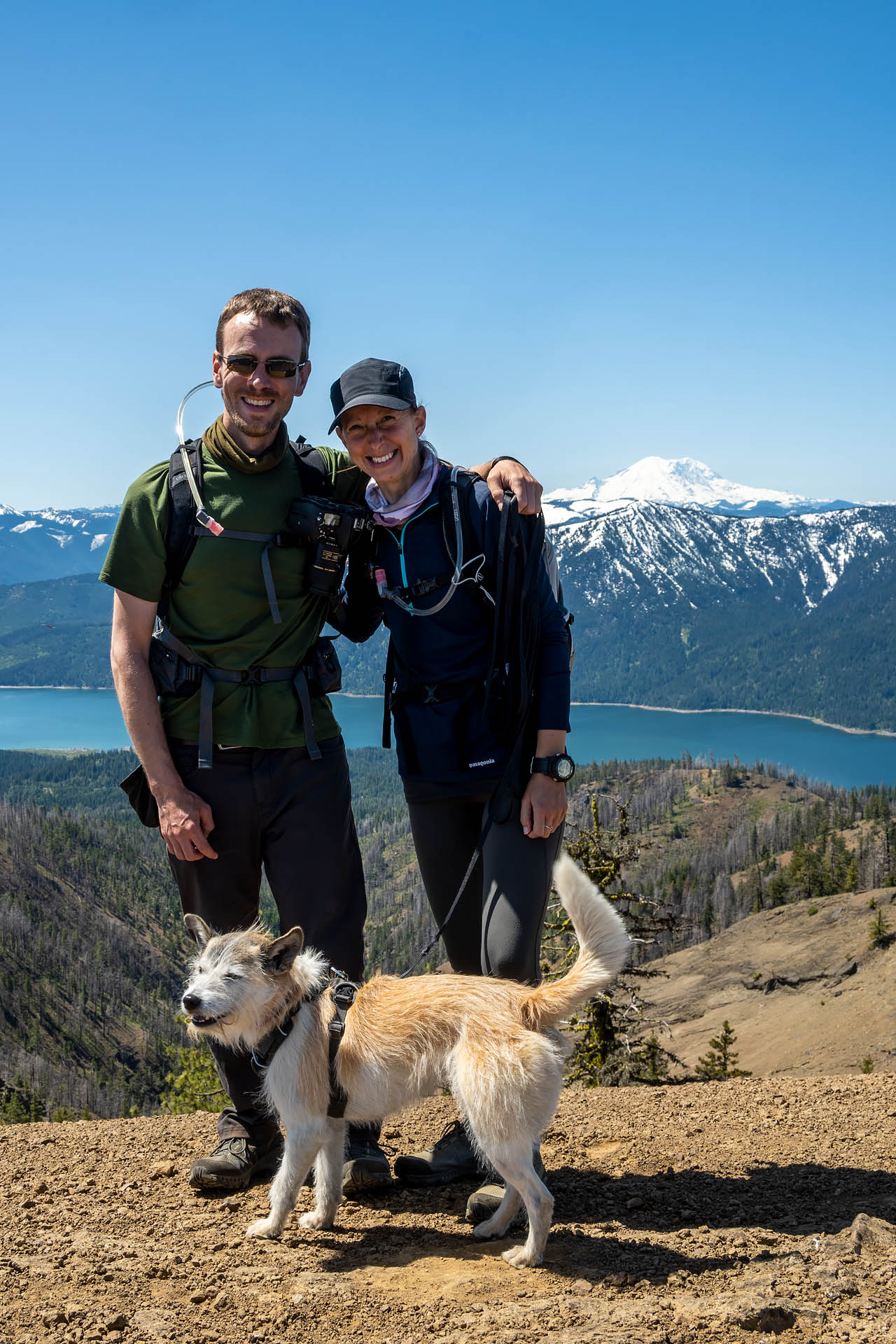 As we snapped some pics from the unnamed bald, we struck up conversation with a couple of dirt bikers who’d come up to do a bit of riding and trail maintenance out toward Teanaway Ridge. From the top of the bald, it looked like a trail dipped down toward the east. Curious, Stephan poked around the Gaia GPS app’s topo map to see if we could make a loop out of the hike. The two bikers mentioned that they’d come up from that trail as it was open to motorbikes, unlike the Hex Mountain (#1343) spur. Thinking a loop might be nicer than simply returning the way we’d ascended, we decided to give it a go.

If you decide to hike Hex Mountain, we’d strongly recommend concluding your hike with ‘and we returned the way we came.’ Our attempt at making a loop was ultimately successful, but not without a little route finding as well as some serious extra effort and wasted time.

The first 2.3 miles descending Hex’s eastern ridge were totally fine. The trail, which we later IDed as #1340 on the Okanogan-Wenatchee NF map, is clearly used heavily by motorbikes as it was exceptionally gouged and eroded. While it was in no great shape, it was easily navigable. After almost 2.5 miles, Stephan looked down at the map and said we’d missed the turn onto the cutoff trail that headed back to the service road we had ascended on. We both looked around puzzled as there was not even a hint of a trail. We headed off trail into the woods, thinking maybe it was just overgrown and we’d find some hint of a path. Although you’d never know it, Gaia suggested we were standing right on top of it.

After about 20 minutes of scouting the area and studying the map, it looked like forging our own path was the best option. The trail we were on (#1340) eventually led to another service road2, but we weren’t sure there was a guaranteed way to cut back over to the original service road. Moreover, the new road would put us several more miles from the Hex trailhead. Since we were only a half mile from our original starting road (NF-116), we decided to just do a little route finding and push onward.

While it was only a half mile, the trail was indeed totally non-existent. We ended up descending about 250 feet down a steep ravine, walking a few hundred feet through Newport Creek until we could find a place to get out the other side, then scrambling up carefully up the other side of the ravine. Once we reached the top of the ravine, it was just a short, flat walk back to the service road. But man, that ravine was kind of a pain in the ass. 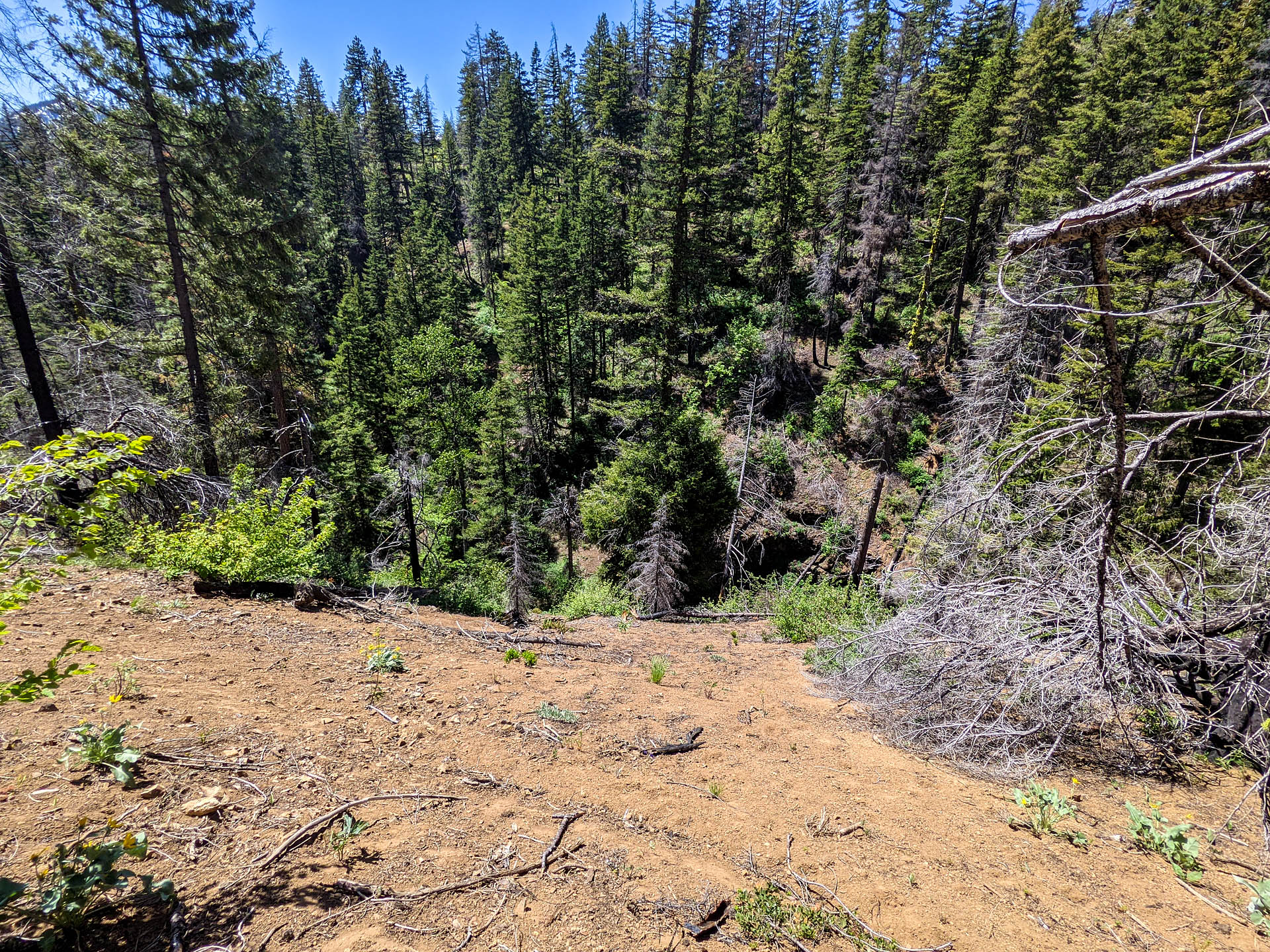 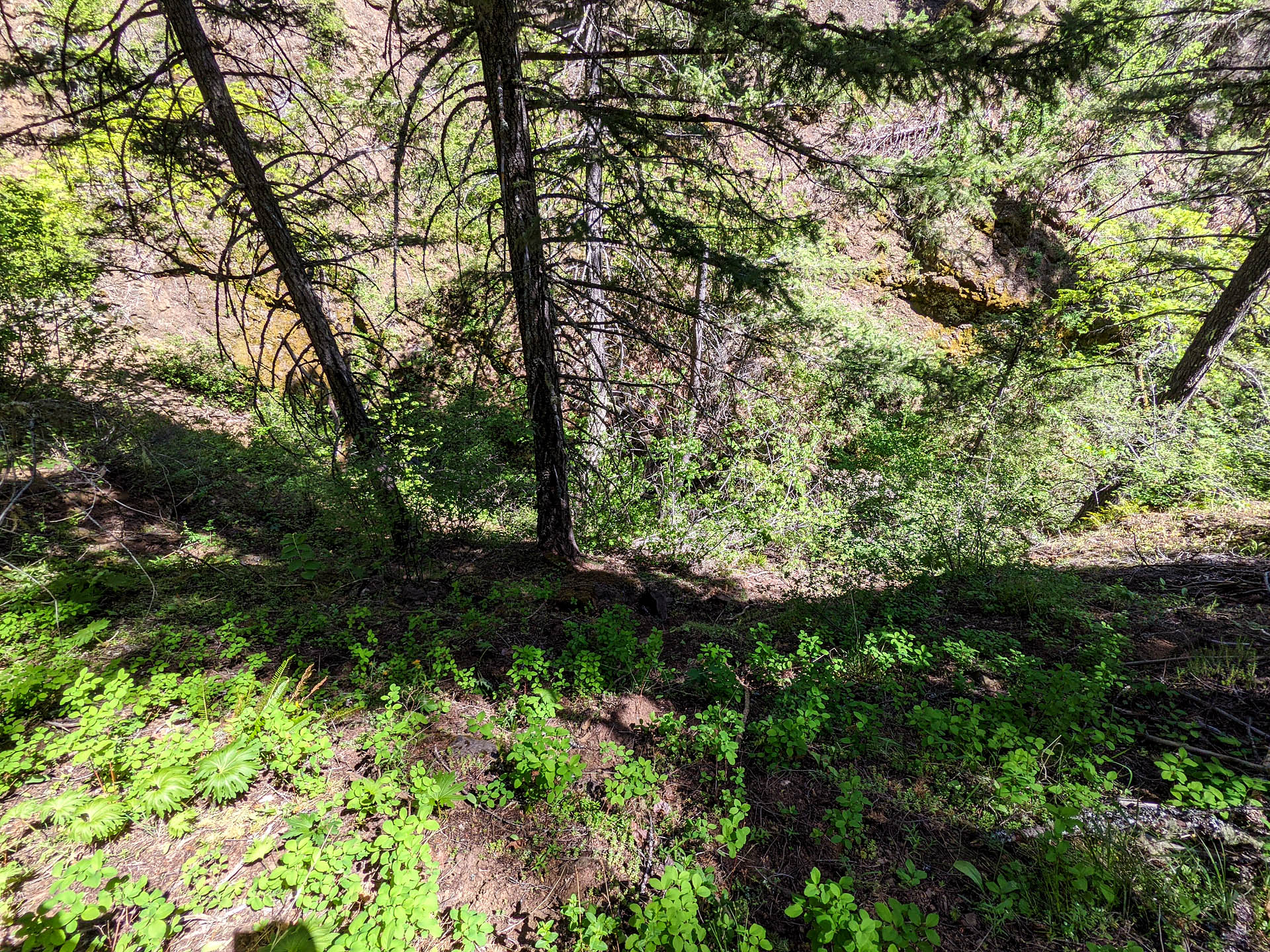 While we eventually got there, we’d definitely not recommend this last bit of route. The gorge was really steep, and it wasn’t easy to keep our footing in some spots with all the loose dirt. Sanchez did amazingly well, but even she was a little uneasy in a couple of places. There was nothing technical or inherently dangerous, but I certainly wouldn’t choose this “route” again.

All in all, Hex Mountain was a great little hike, but much better done as an out-and-back. Our little off-trail adventure at the end added a solid hour and a half onto the trip, and about an extra mile. While we certainly don’t mind the extra distance, the ravine scramble was definitely not my favorite. In the end, though, we walked away with some route finding practice and a gentle reminder to not blindly trust undescribed trails displayed on Gaia. 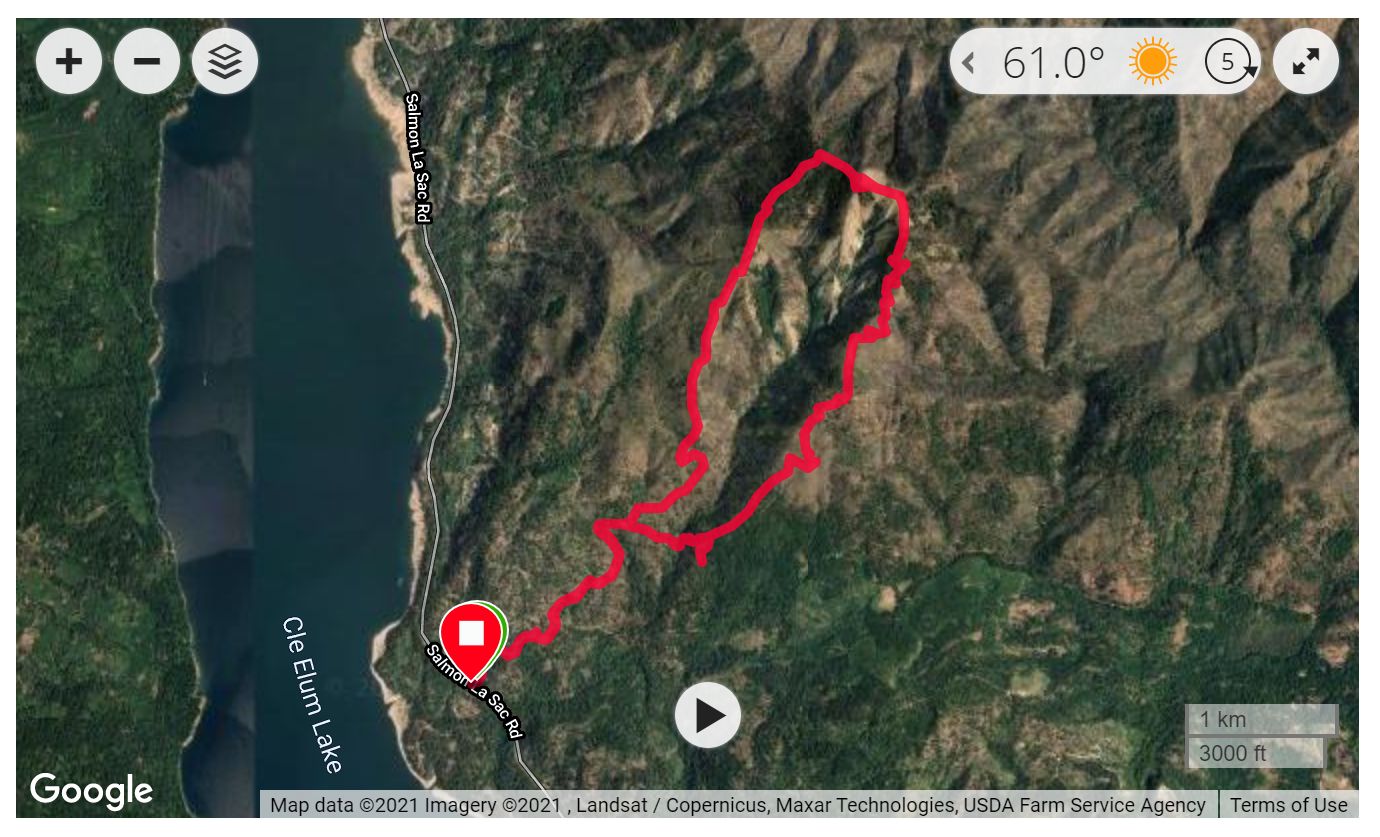 1 AllTrails shows the current standard route to the top of Hex Mountain via Forest Service Road 116 then Hex Mountain Trail #1343 (red on map below). The Okanogan-Wenatchee National Forest website describes two additional routes: (1) Sasse Mountain Trail #1340 (center on map) and (2) Corral Creek Trail #1340.1 (easternmost trail). Both trails are open to motorbikes. While we can’t speak for the Corral Creek Trail, we can say that #1340 is in pretty rough shape. We’d recommend hiking the standard route, but if you’re feeling adventurous, definitely research the other two options before heading out. 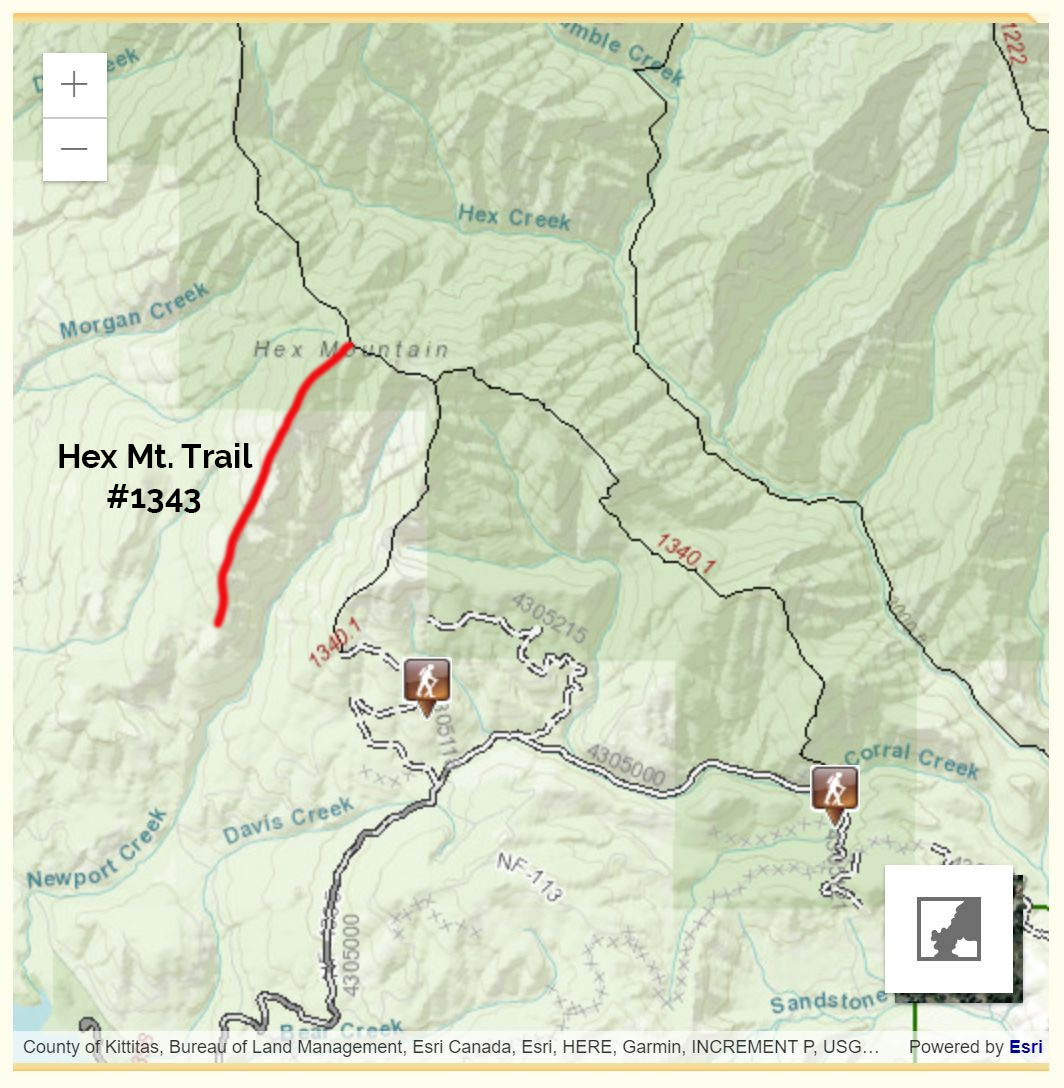 2 Trail #1340 eventually rejoins (closed) Forest Service Road 4305-112/118. Once we returned home and studied the satellite of the area, it looks like we could have followed the road for a short distance, then cut back over on a visible trail. This option was not on Gaia, and not easily recognizable from the topo map we had on hand. It turns out, another hiker attempted a loop similar to ours the day after we hiked – also by naively trusting the Gaia map – and posted his experience on the WTA website. That hiker faltered at the same spot we did, but ended up connecting to NF-4305-112 and crossing back across Newport Creek via this more discernible trail.