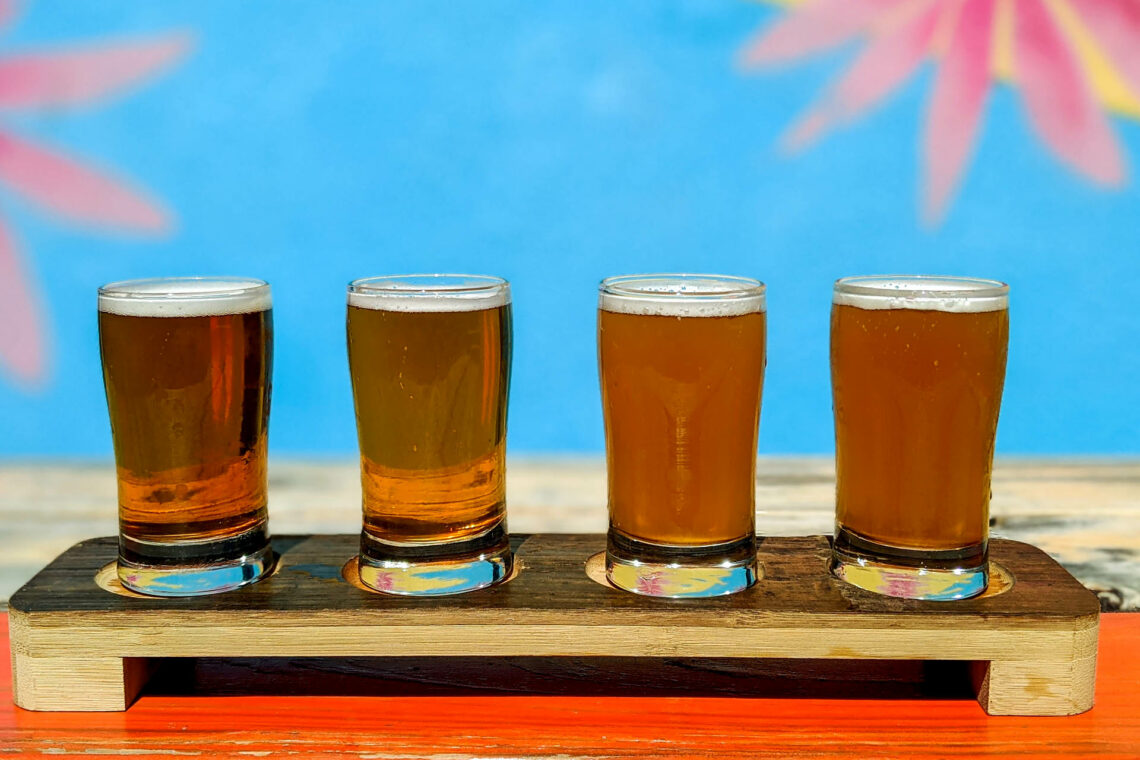 If you’re a craft beer enthusiast and find yourself in Whitefish or the surrounding areas, you shouldn’t have too much trouble finding a good brew. Small, independently-owned breweries dot the Flathead region, and several seem to specialize in hop-forward ales. Here’s a look at some of the players in northwest Montana’s up-and-coming craft beer scene:

This is a fantastic little brewery just north of downtown on the way to Big Mountain. If you’re looking to enjoy a flight or pint on a sunny afternoon, Bonsai has an absolutely amazing outdoor space. The corner lot has a large grassy area along the front and side of the building, large trees for shade, and café and picnic tables that are well spaced to offer patrons plenty of room.

With the abundant outdoor area, this was the one place we dined at while in Whitefish. The menu offers a small selection of standard pub fare – salads, sandwiches, burgers, and hot dogs – but also includes a variety of ‘soul bowls.’ I typically struggle to eat at brew pubs, with few offering any sort of meaningful vegan option. However, an unexpected amount of Bonsai’s menu is vegetarian/vegan friendly.

I excitedly ordered the Bowlin’ Out – a bowl of jasmine rice, greens, beer-braised beets, pickled veggies, and hummus served with a tahini dressing. It sounded like the strangest combination of flavors, but it was shockingly addicting and really delicious. Stephan opted for their signature brisket blend burger on ciabatta, and was very pleased. We also tried the chips with homemade salsa, and the salsa verde was excellent. 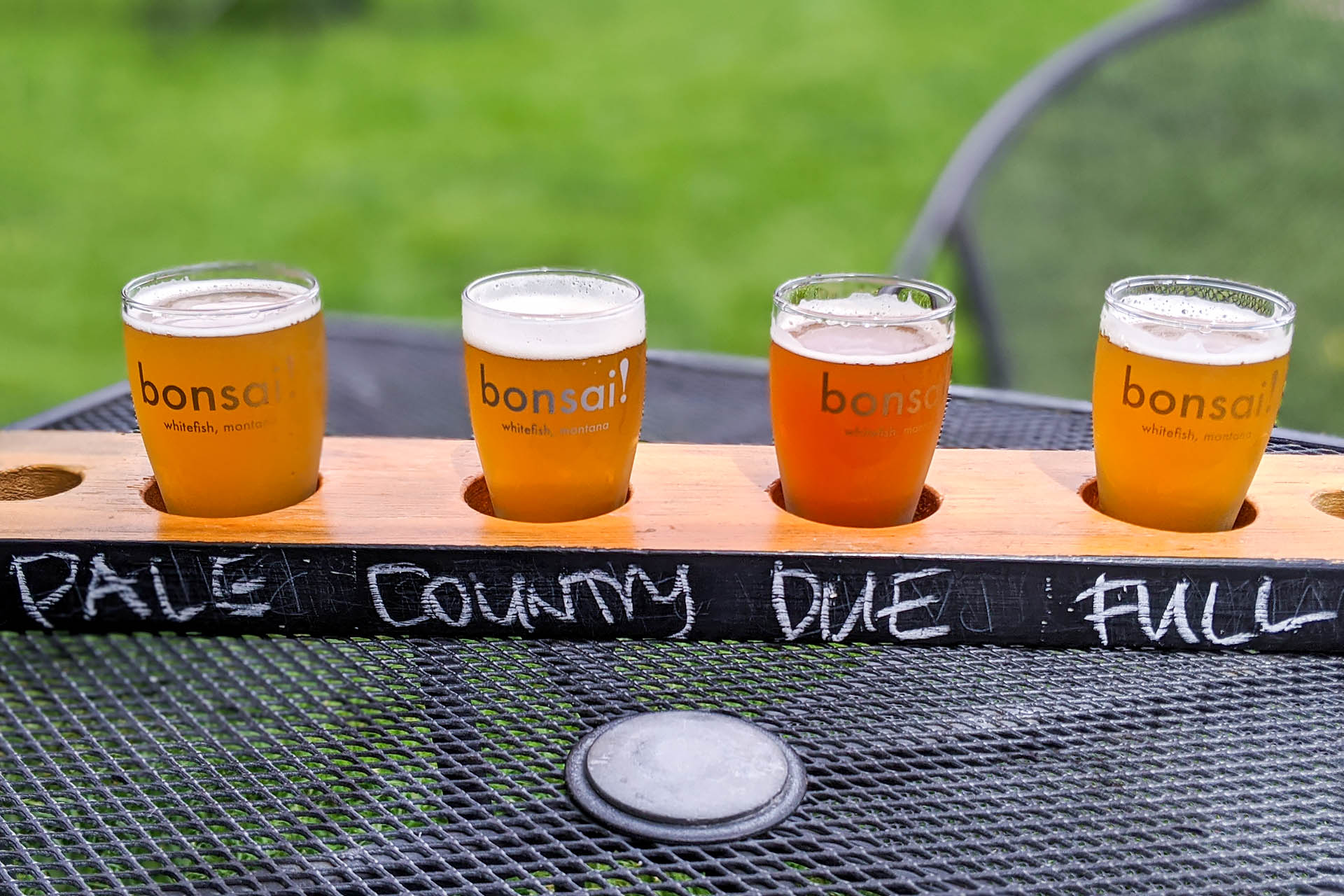 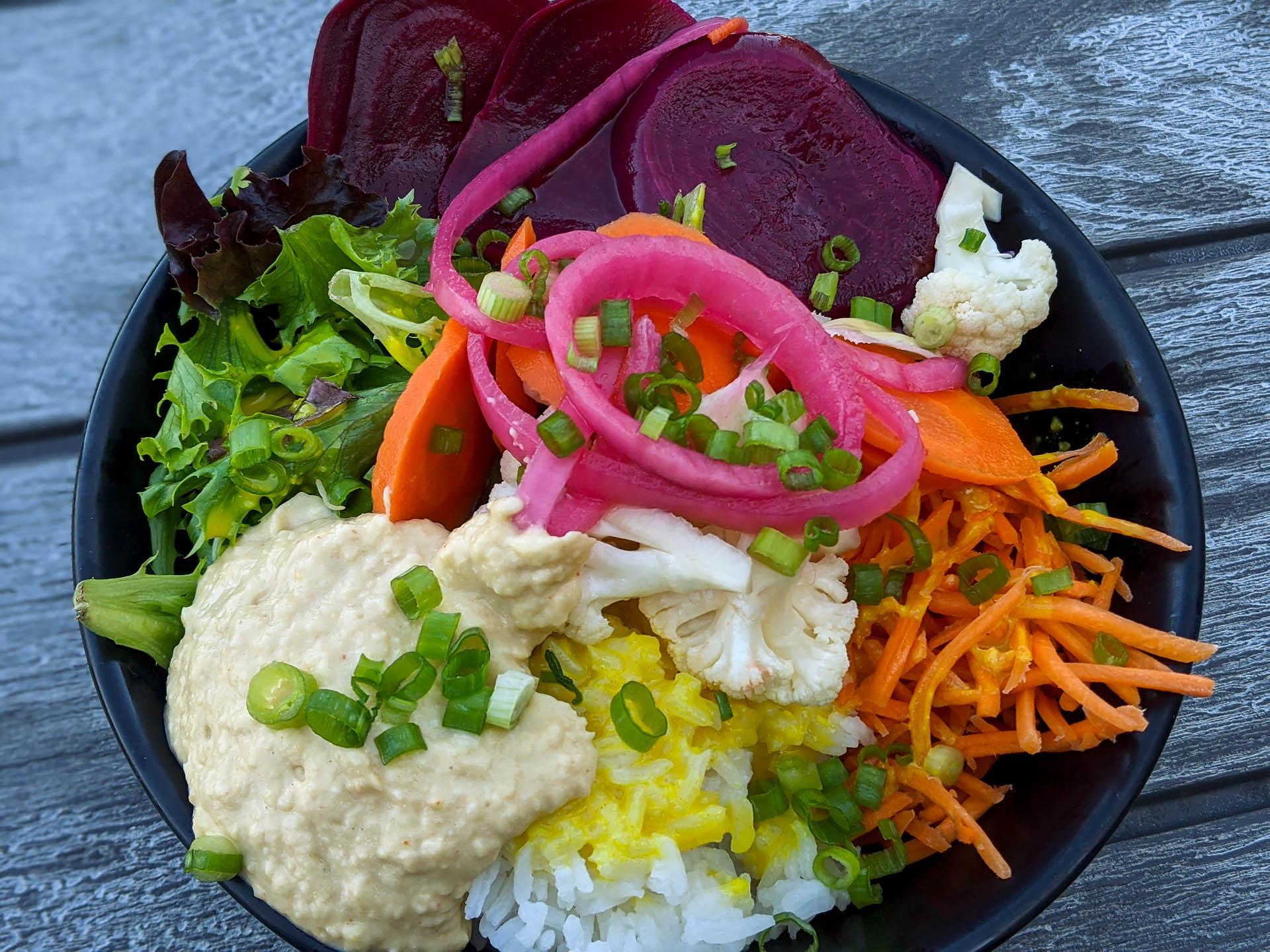 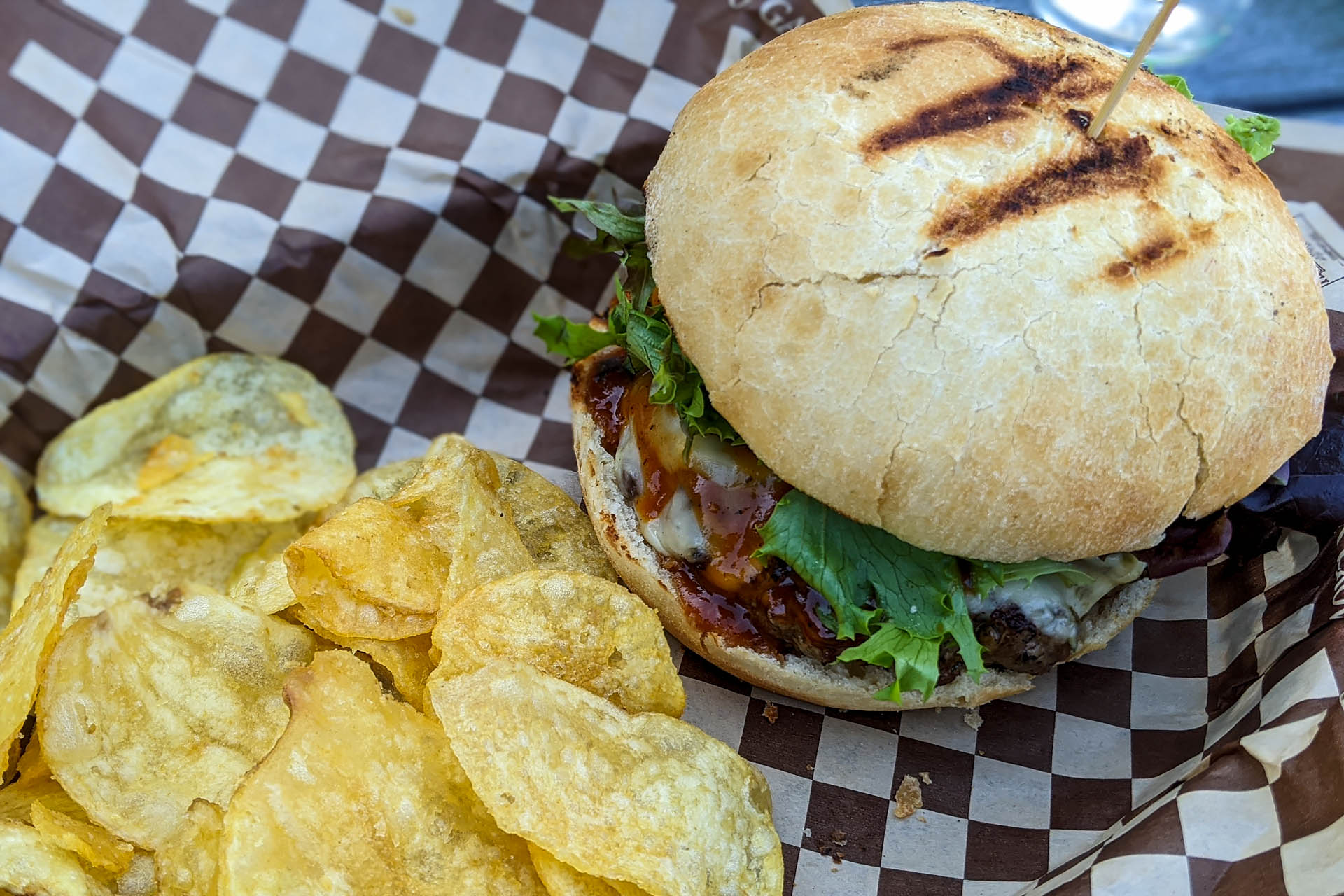 Overall, the beers were solid, and they had a nice selection of IPAs and pale ales on tap (for those hopheads out there). The staff was friendly, the service was speedy, the food was outstanding, and the outdoor space is dog-friendly. Definitely check out Bonsai if you’re in town.

Located in downtown Kalispell, Bias Brewing offers a tap list of about a dozen craft beers and hard seltzers. We found the beers to be pretty good overall, with the Hellroaring Hazy IPA taking the crown. I also tried my first sample of hard seltzer here, which seems to be a growing trend (I know, I’m probably really late to the party). It was huckleberry flavored and was actually pretty good. At 5%, it didn’t have a particularly alcoholic taste, so I’m guessing those babies could be dangerous if you were slinging them back on a hot day. 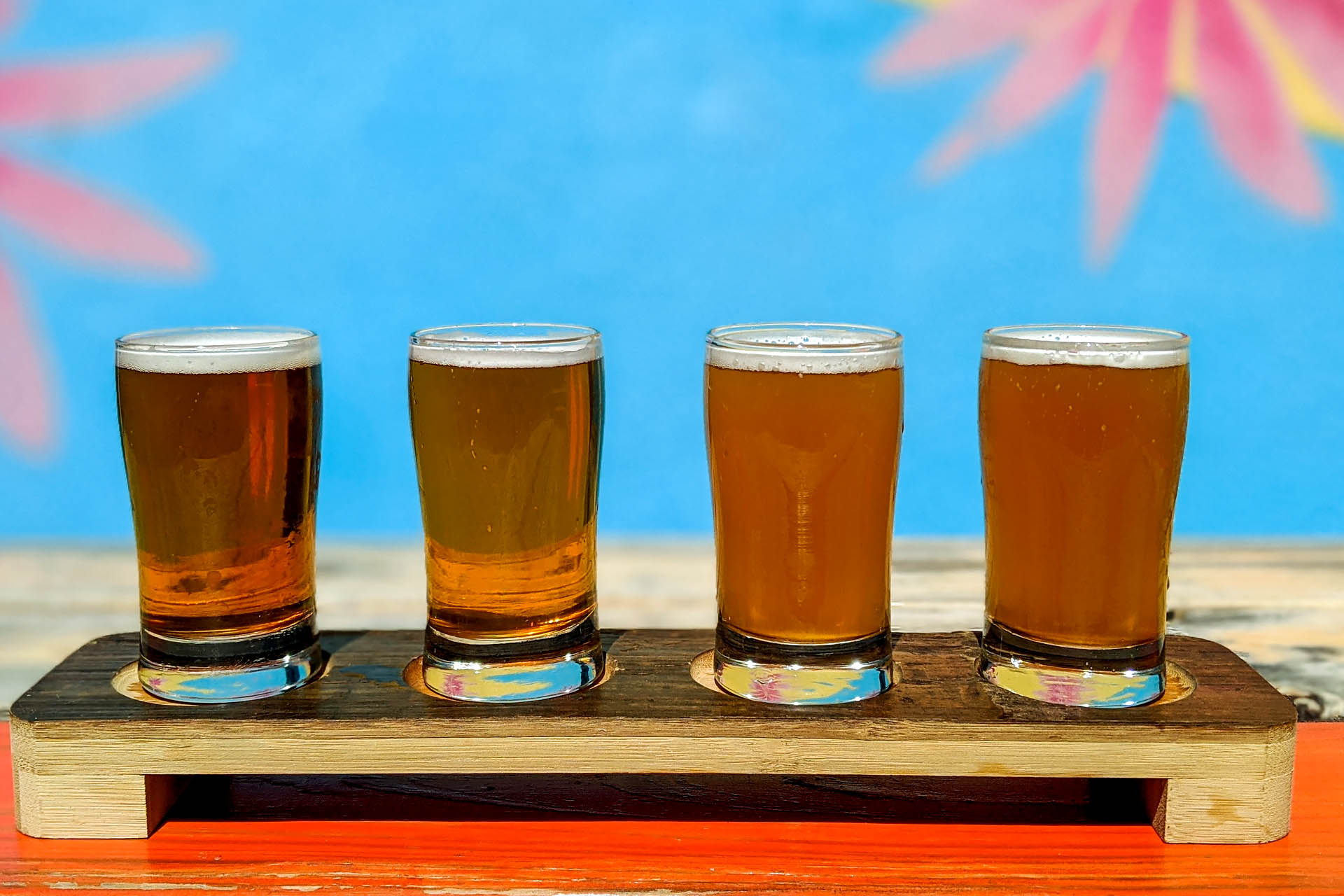 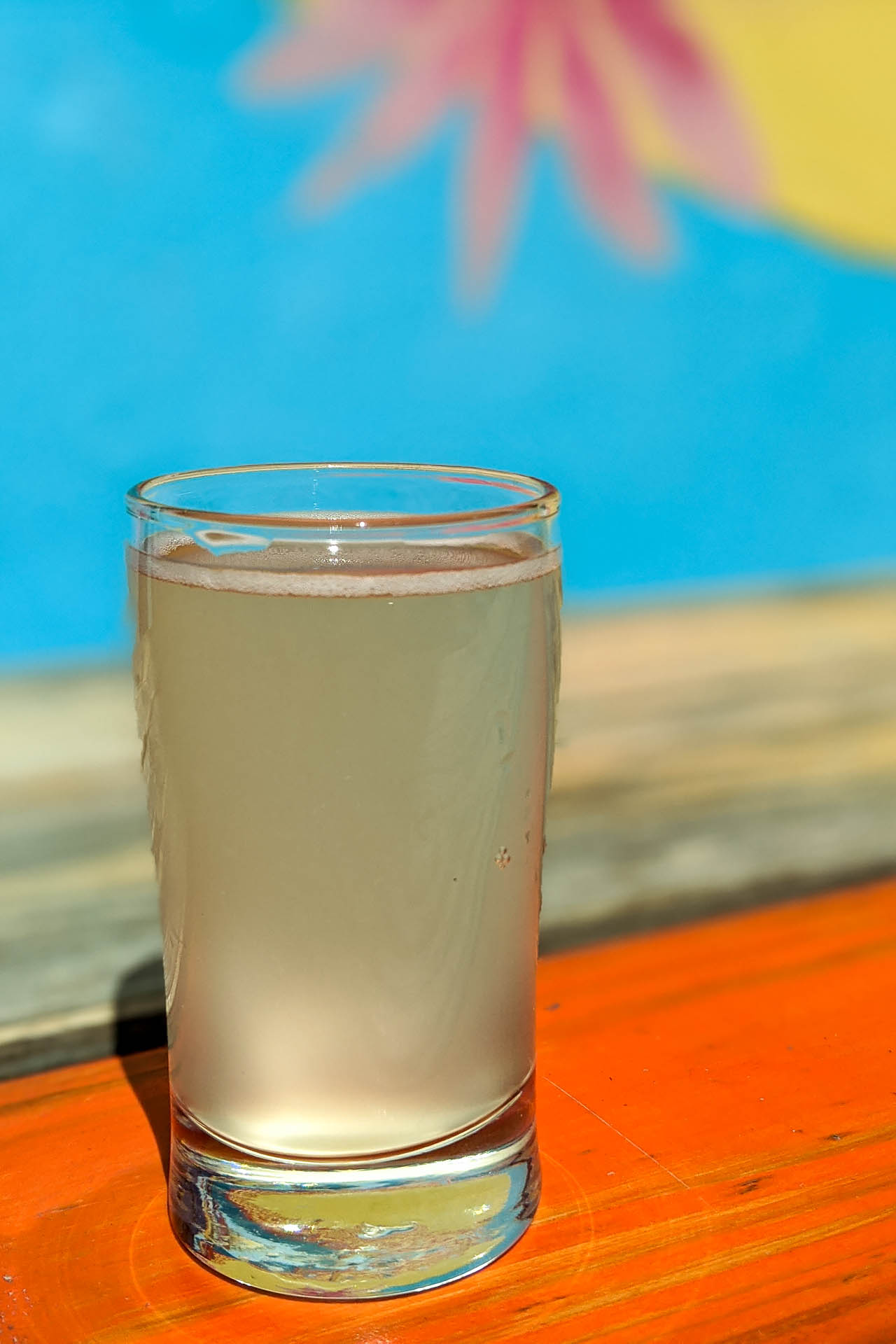 Although we didn’t order food, the brewery’s Heck’s Kitchen offers build-your-own bowls (with vegan possibilities to boot) as well as a small selection of sandwiches/shareables. Stephan took note of the huckleberry habanero sauce on the menu, and I think was a bit regretful he wasn’t able to try it.

One thing at Bias that particularly caught our attention, aside from their wicked cute porcupine logo, was the mylar bladder ‘growlers’ they were offering. The easily portable growlers could be enjoyed at virtually any outdoor venue, and were offered for free (no surcharge on top of the fill price) to encourage people to continue supporting the business through carry-out during the pandemic. Both brilliant and thoughtful, in our opinion.

This Kalispell location is a bit less central – near the Glacier Park Airport on Highway 2 and well outside of the town center – but a trip to Sacred Waters is worth it if you’re looking for some really good craft beer.

Their flagship The Bob IPA (a nod to the Bob Marshall Wilderness) was amazing, and the obvious  winner of the bunch. In fact, Stephan and I both agreed that The Bob was the best beer we’d tried while in the Flathead area… though according to our nerdy grading system, Sacred Waters’ Hungry Horse #11 Hazy IPA was a not-too-distant second. 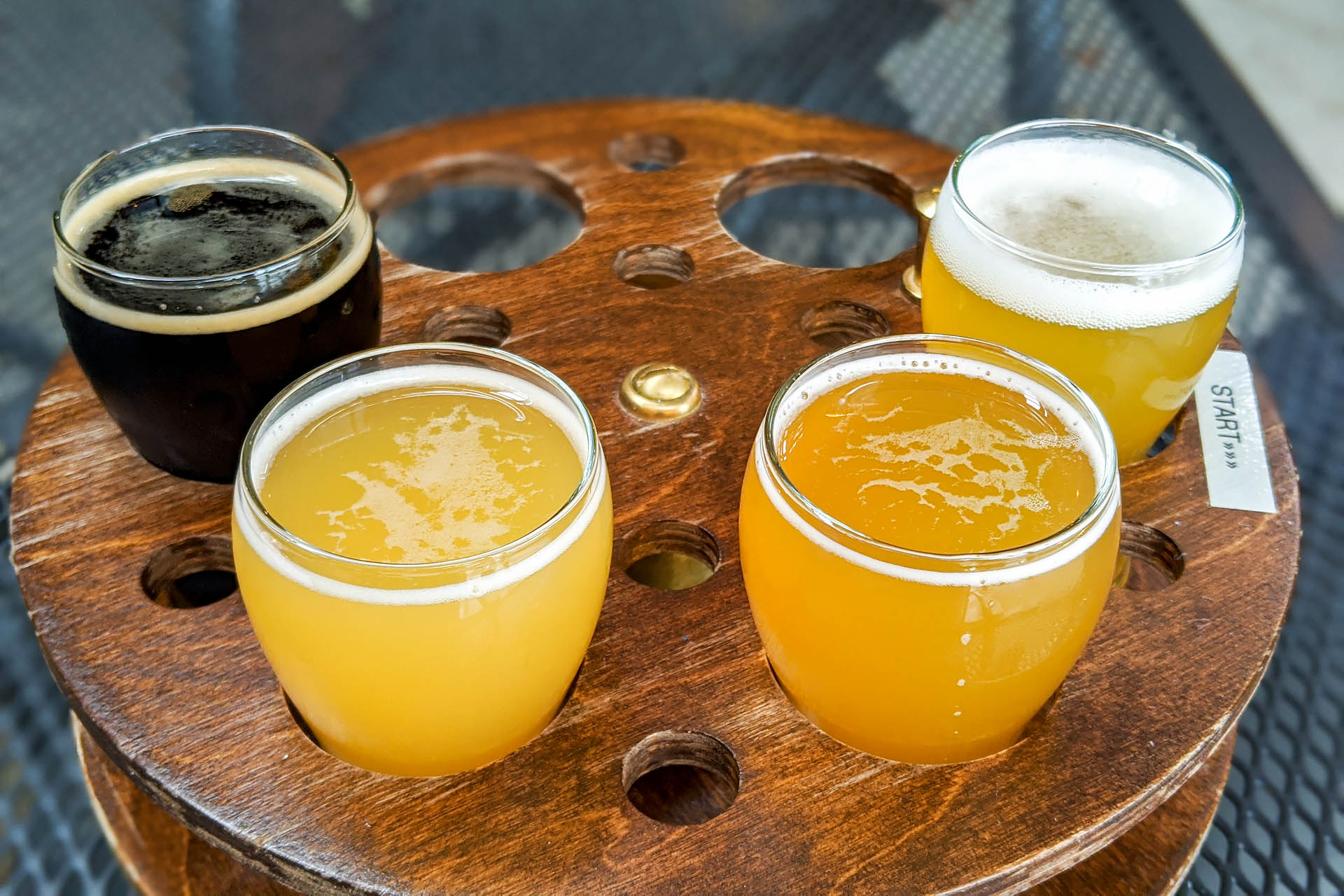 The only negative was that they were out of cans when we visited. We were hoping to squirrel away some of The Bob for my hop-loving Dad, but their canning process was temporarily shut down for several weeks. That said, I have no idea if this interruption was due to the pandemic-associated aluminum can shortage, or if they typically have an intermittent canning schedule. Either way, not a big deal – we were just hoping to buy some more.

Close to Glacier National Park, Backslope Brewing offers a taproom and kitchen on the west side of Columbia Falls. We drove past the brewery countless times as we traveled to and from trailheads around the Flathead National Forest and Glacier, and we tried to visit three times before finally stopping. Each time we pulled into the lot, the place was absolutely jumping. We were not particularly comfortable with that many people during a pandemic or with sitting inside (the small patio was habitually full), but we were finally able to return for a quick flight on a Wednesday afternoon.

The beers were decent, if not slightly underwhelming, though they did have a few hoppy ales to choose from. Our favorite was the Let Me Ride IPA, brewed with Mosaic and Vic Secret hops. Additionally, I ordered a house-made ginger lemonade, which was friggin’ awesome. I could have sucked down a gallon. 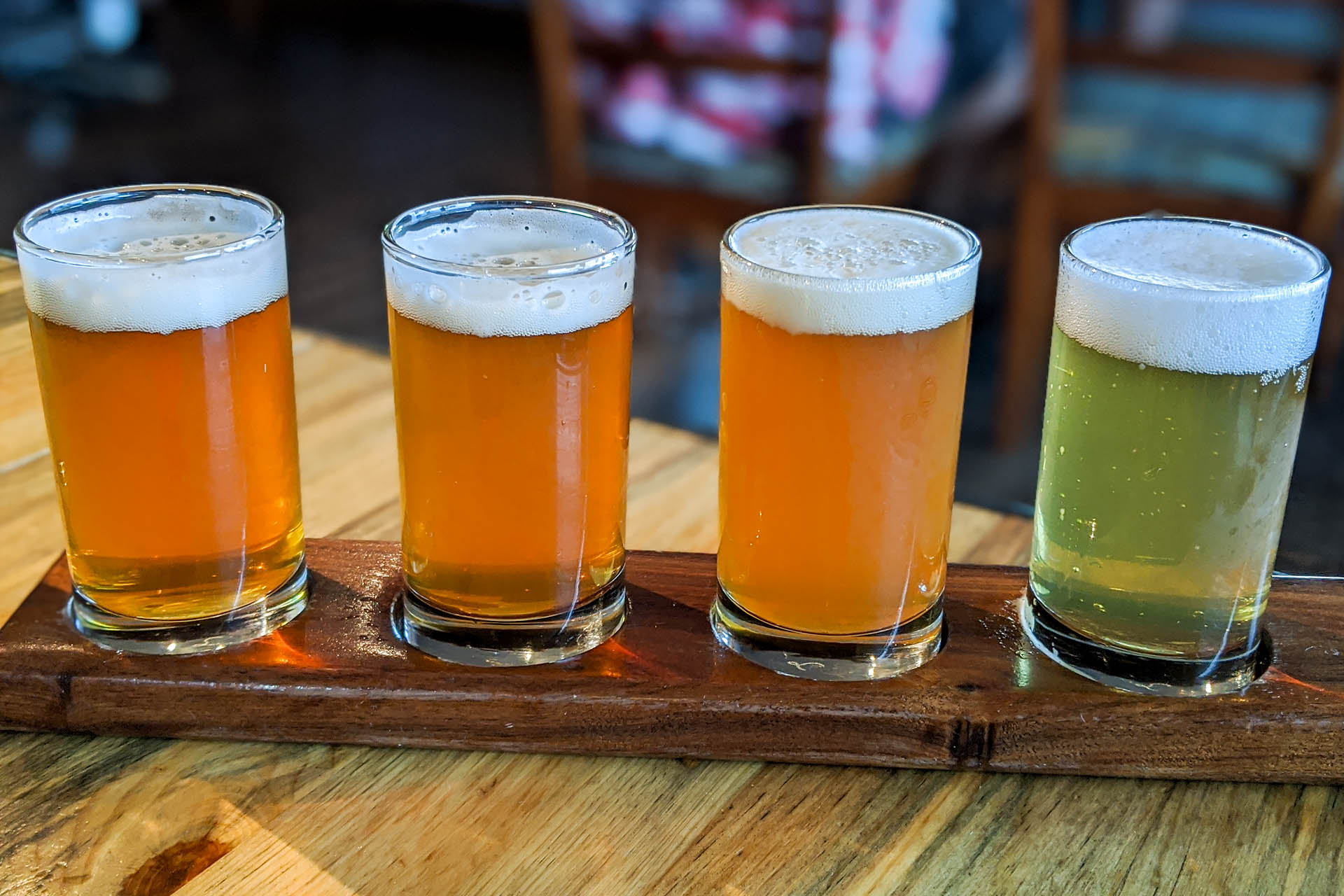 Note: While we didn’t order meals, a couple of local friends raved about the food here. Based on their other recommendations, we’d tend to heed their advice. Perhaps we’ll return sometime when we’re not in the midst of a public health crisis.

Overlooking the northern shore of Flathead Lake, Flathead Lake Brewing offers a solid selection of hopped-up brews for all you IPA lovers out there. This was easily the largest of the six breweries we visited, with their cans being available in supermarkets and retail shops across Montana and northern Wyoming.

We were interested to learn that the brewery is environmentally minded, and is currently pursuing a LEED (Leadership in Energy and Environmental Design) certification, awarded to businesses that meet standards in energy efficiency and sustainability.

Importantly, their beer was also good. My top pick was their Centennial IPA, brewed with Centennial and Zythos (a new one for me) hops. Stephan preferred the Zero Day Double IPA, brewed with Columbus and Citra. And while our favorites are usually the hop-forward brews, Stephan really enjoyed their Rising Sun Espresso Porter, one of their seasonal selections. With a friendly staff and nice spot on the lake, FLBC is great spot to stop if you’re spending a warm summer day on the water. 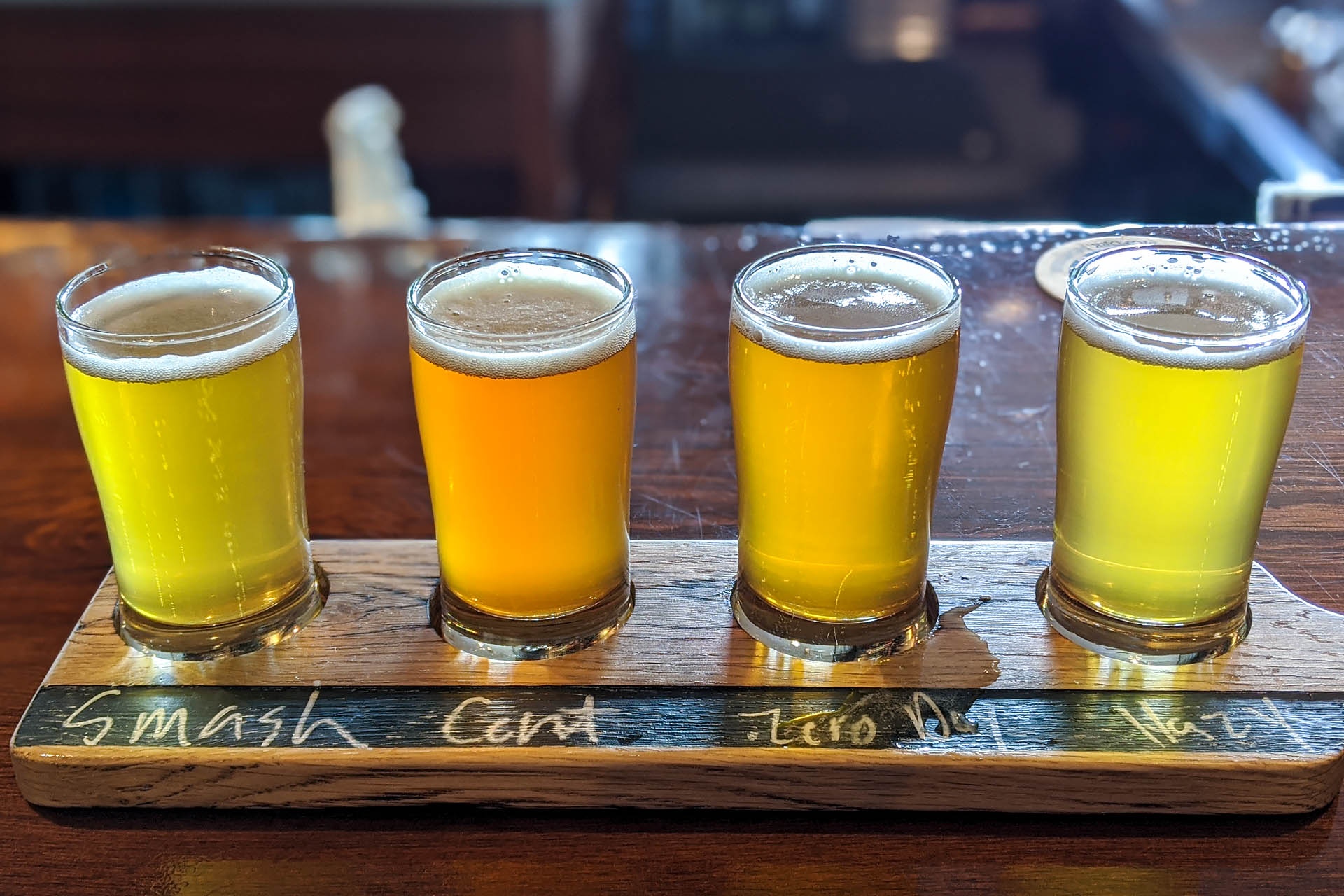 If you’re staying in the Whitefish or Columbia Falls areas, this one’s a bit out there – about a 45-minute drive from downtown Whitefish. H.A. (Homestead Ales) Brewing is a small operation just south of the mountain town of Eureka, situated on the family’s farmstead. It’s easy to find, about 2.5 miles up Grave Creek Road, just off Highway 93. If you’re planning to explore the region’s Ten Lakes Scenic Area – a pristine swath of wilderness rife with lakes and hiking trails – H.A. Brewing is right on the way.

At the advice of a friend, we visited after a day of hiking around Bluebird and Wolverine Lakes. We snagged a spot at the perfect picnic table for social distancing and enjoyed a flight of the few ales they had on tap. The beers were good overall, with our favorites being their flagship Grave Creek IPA and the Crown-20 IPA, one of their rotating selections. 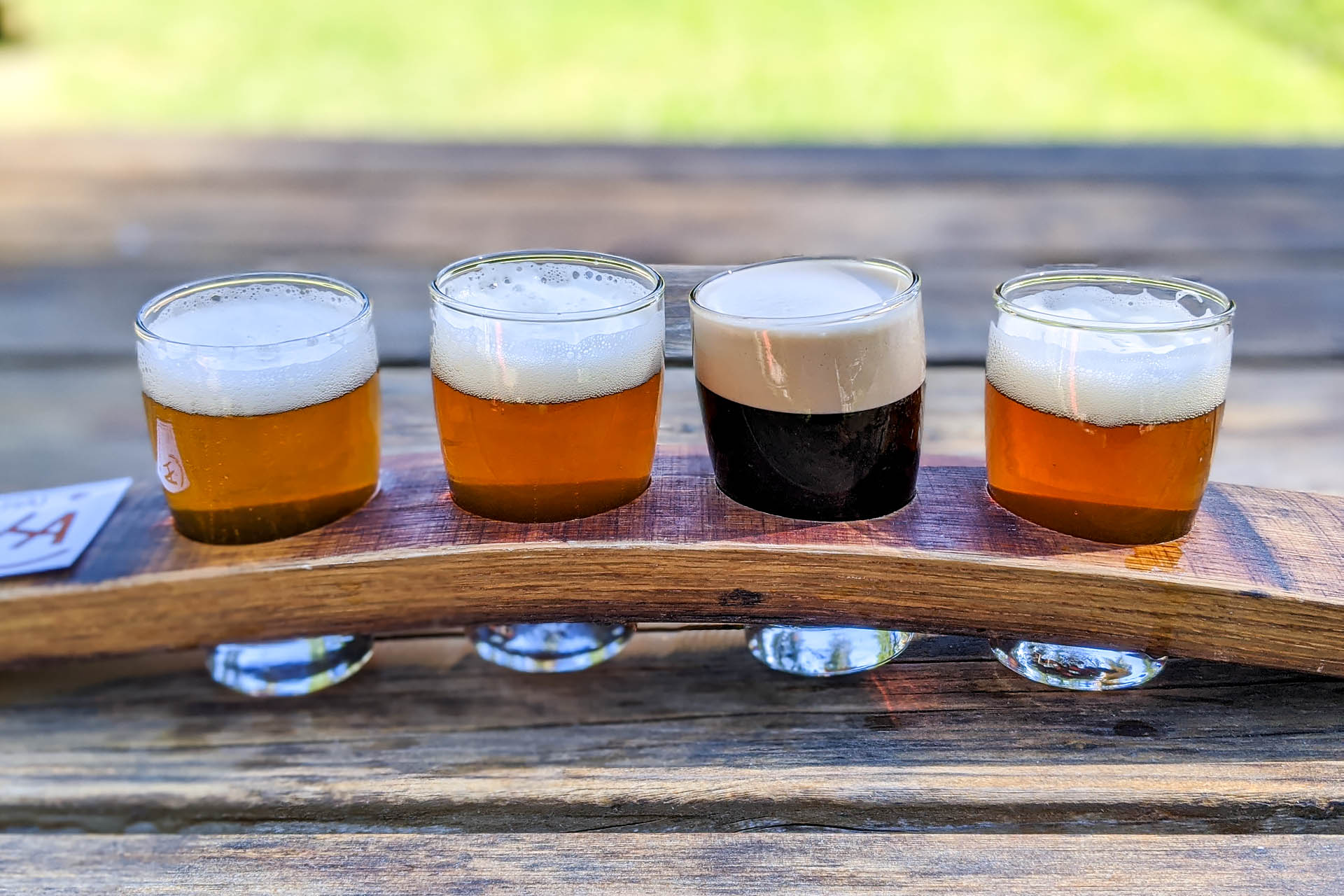 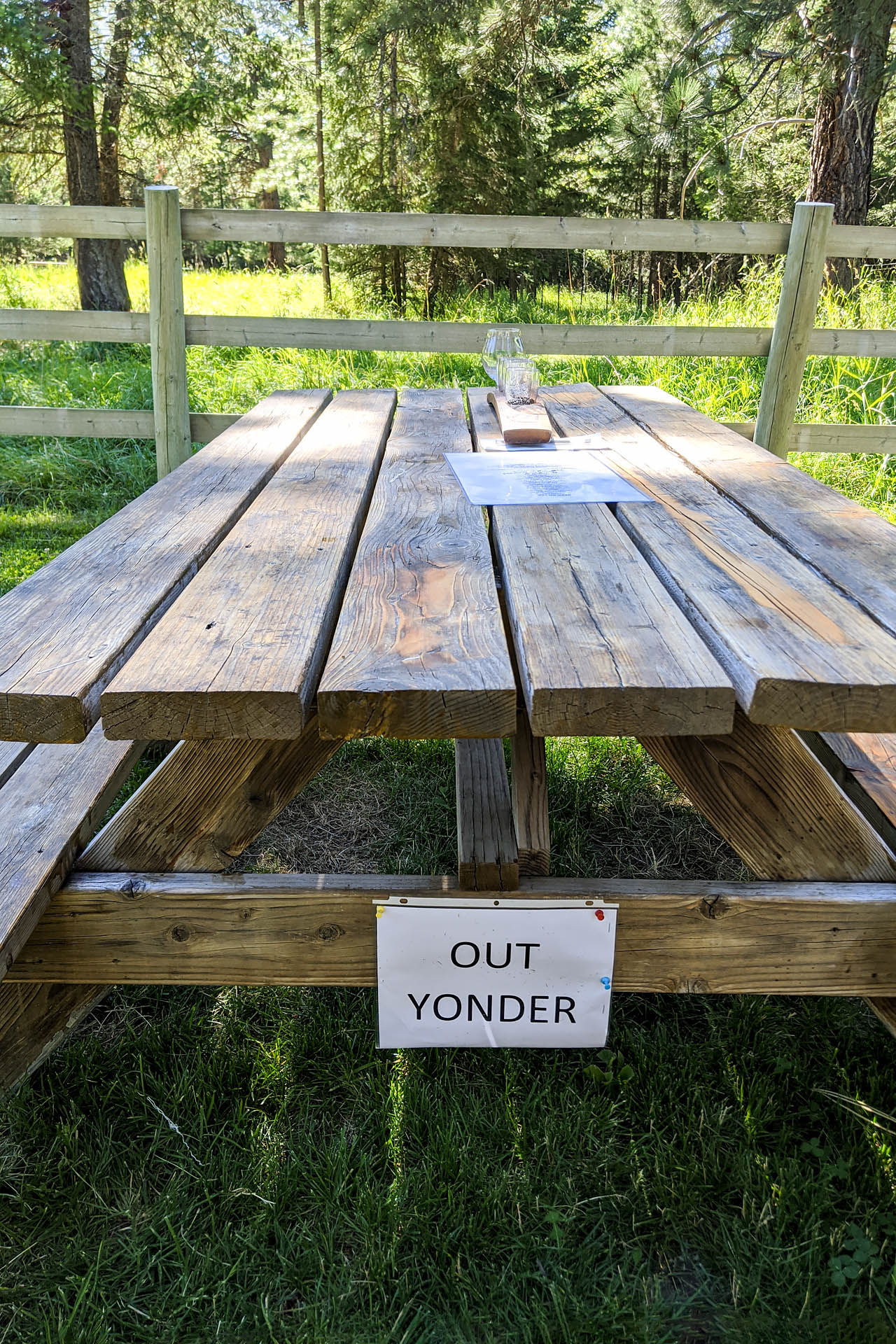 (1) With an outdoor seating area only, the brewery is open seasonally from late May through early September (weather permitting). Check their website or Facebook page for updates.

(2) Dogs are not allowed in the garden (the family has a working farm dog on site). Plan accordingly if the weather’s too hot for your pup to sit in the car. If you do leave your dog (safely) in the car, the brewery is happy to provide water.

While Missoula isn’t exactly northwest Montana (it’s a good two and a half hours south of Whitefish), we’d be remiss to leave this awesome brewery off our list. We stopped here the day we left Whitefish. It was roughly on the way to our next destination, a small town outside Yellowstone, and seemed like a fun way to break up the trip.

Founded in 2015, Imagine Nation’s owners are working to improve their community and tackle social injustice through their brewery and education center. The microbrewery is run by a husband and wife team that have dedicated their lives to humanitarian efforts, with each having spent years working in conflict zones around the world. Since opening the doors to their community-minded brewery, Fernanda and Robert have remained steadfast in their endeavors to helping others, hosting hundreds of fundraisers and community events.

Not only did we love their mission, but their beer is freakin’ awesome! We tried four of their various IPAs, and each one was outstanding. Our two favorites were the Hyperspace Mango Milkshake NEIPA and the Together NEIPA. We also tried the Nonduality Triple NEIPA and Good Trouble Double NEIPA, which were both also fantastic. I tend to shy away from the higher alcohol IPAs, but these were both surprisingly good and not too heavy. In keeping with pandemic safety, Imagine Nation was temporarily serving cans only when we visited (we applaud their extra efforts to ensuring customer safety). So, rather than sit down for a flight, we split one can there and grabbed a mixed 4-pack to go. If we lived in Missoula, this would for sure be our go-to microbrewery. 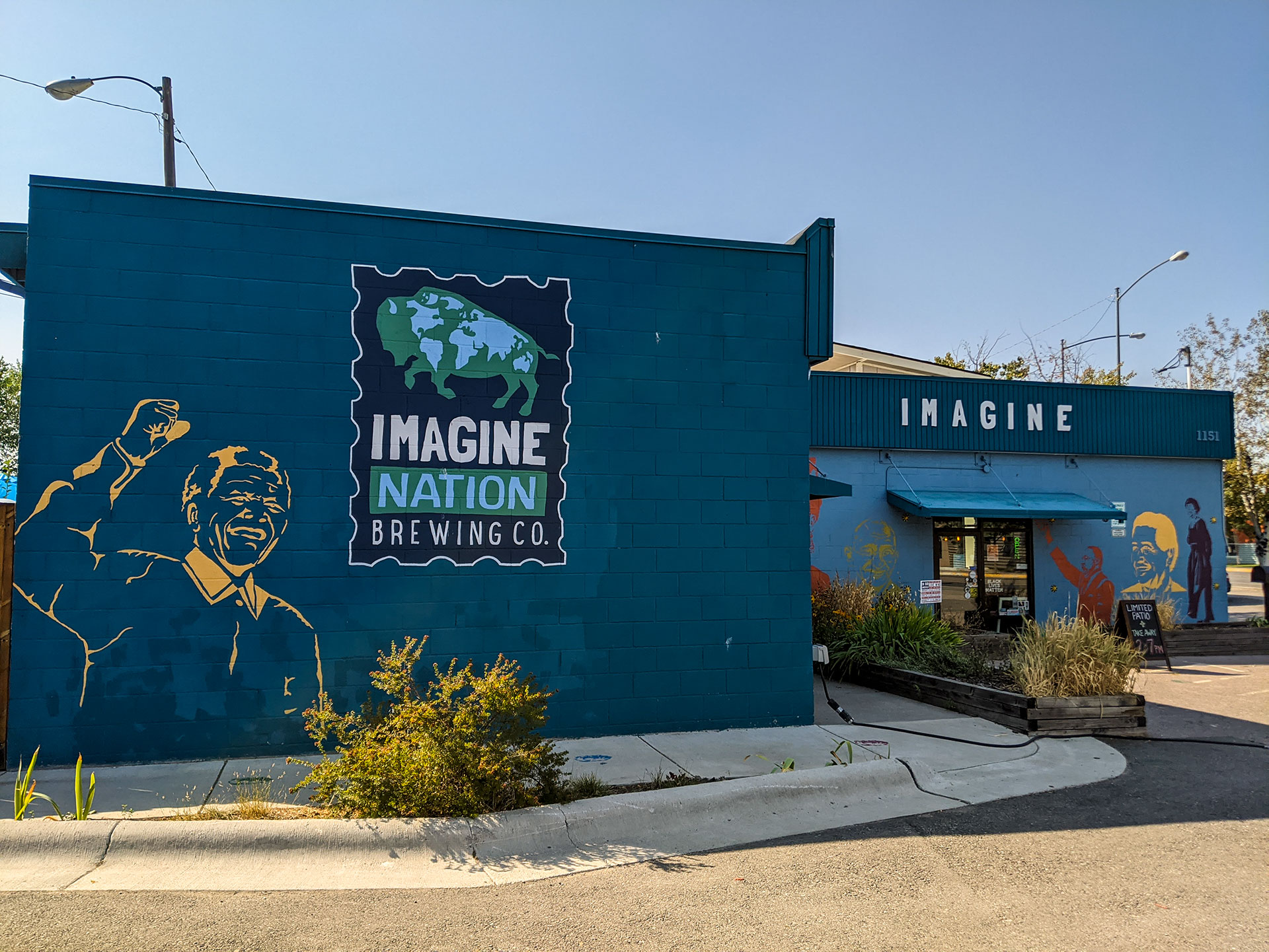 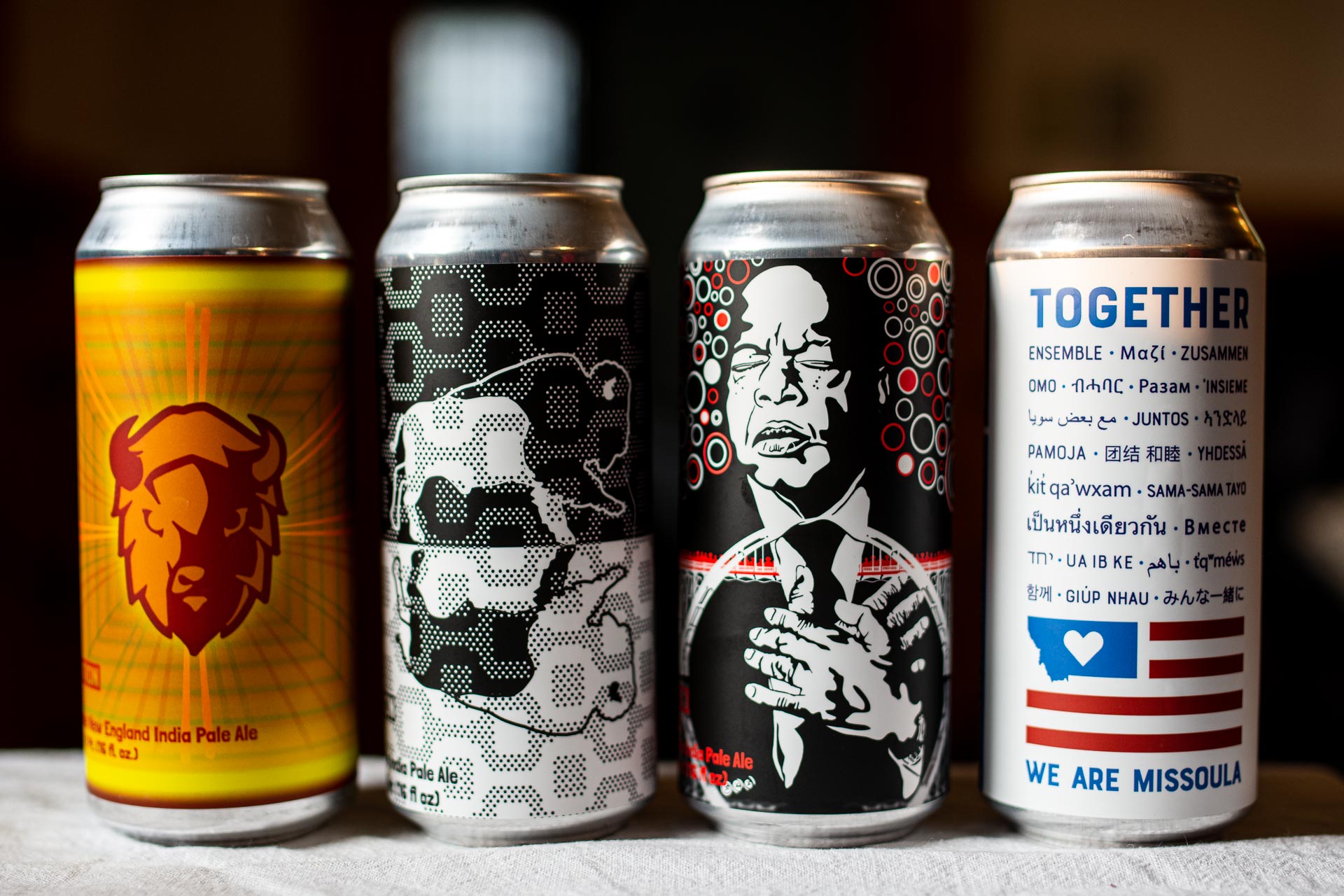 For more on their story, check out this great writeup in CraftBeer.com: https://www.craftbeer.com/featured-brewery/from-conflict-zones-to-craft-beer-imagine-nation-brewing.

Of the seven breweries we visited, we’d easily award top marks to Imagination Nation in Missoula. Pretty much everything about their beer, brewery, and service was flawless. Also, you can’t beat beer with a mission.