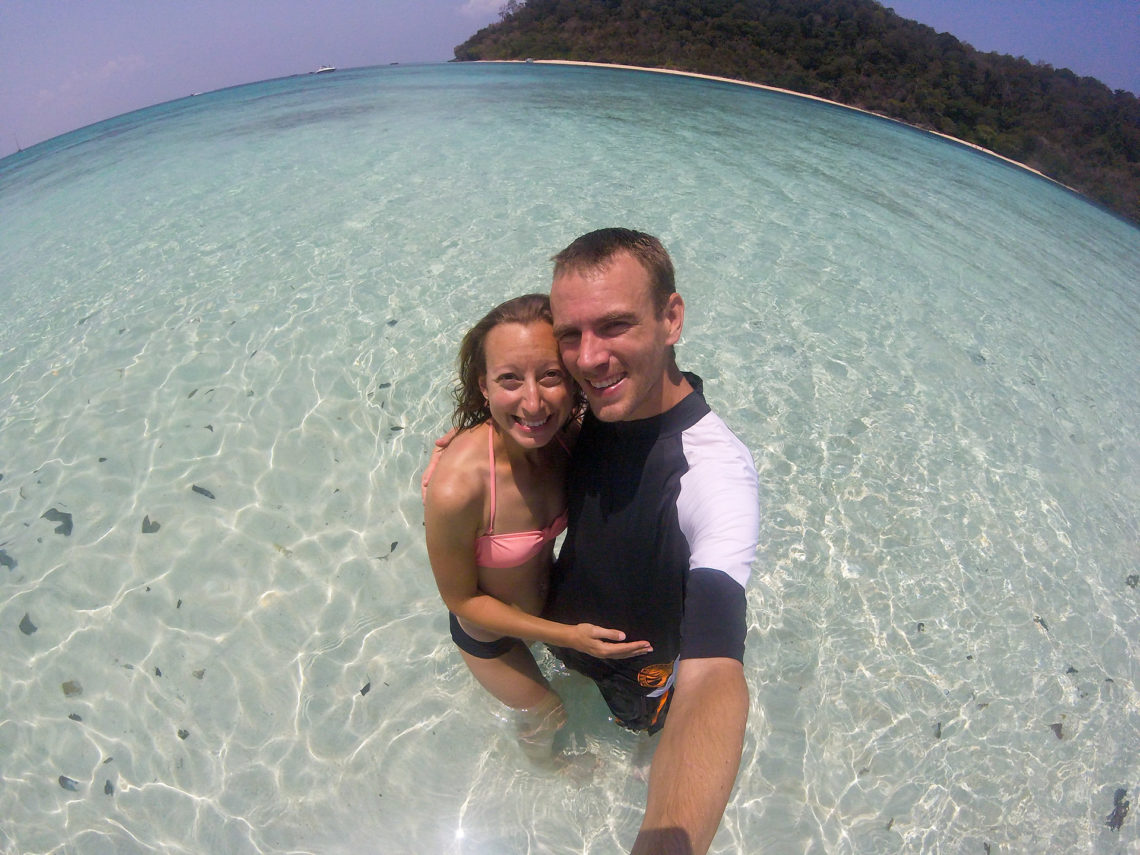 While we enjoyed the beaches of Koh Lanta, we chose to dedicate a couple of days to visiting some of the other nearby islands. At the recommendation of a San Francisco couple we met in Khao Yai, we headed by speedboat to Koh Rok, a pair of small islands about 30 miles south of Koh Lanta.

We spent several hours on a lovely little beach, and also did two offshore snorkeling excursions along the reefs of Koh Rok Yai and Koh Rok Noi. The beach was quite scenic and, while it was a bit crowded where a number of boats had simultaneously moored for the afternoon, we found an isolated cove just a few hundred meters down the beach. Here, we were able to enjoy a swath of white sand and turquoise water all to ourselves… well, almost all to ourselves. We did have to share with a number of hermit crabs that were scurrying through the sand, proudly flaunting their snazzy, newfound exteriors. 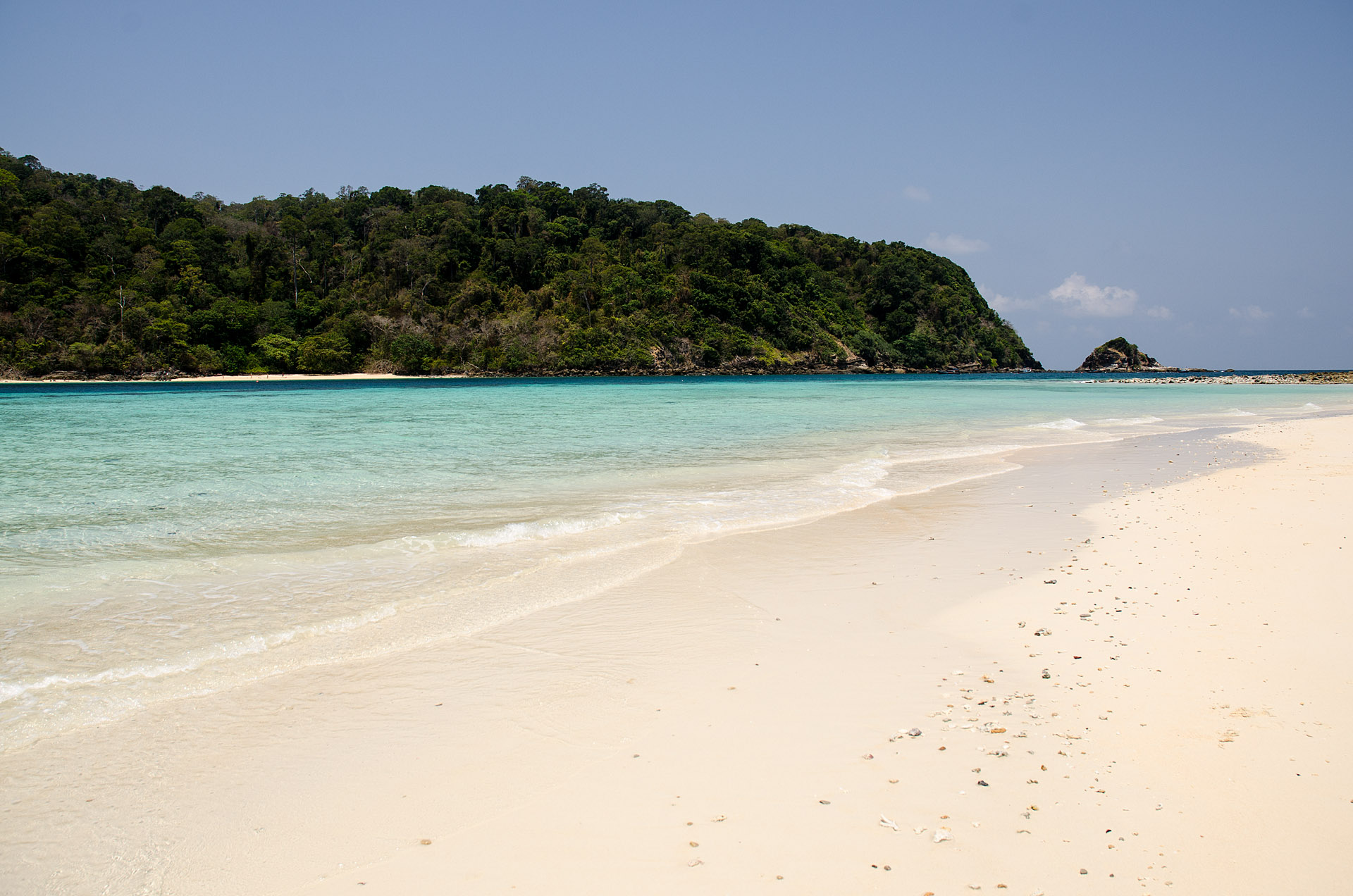 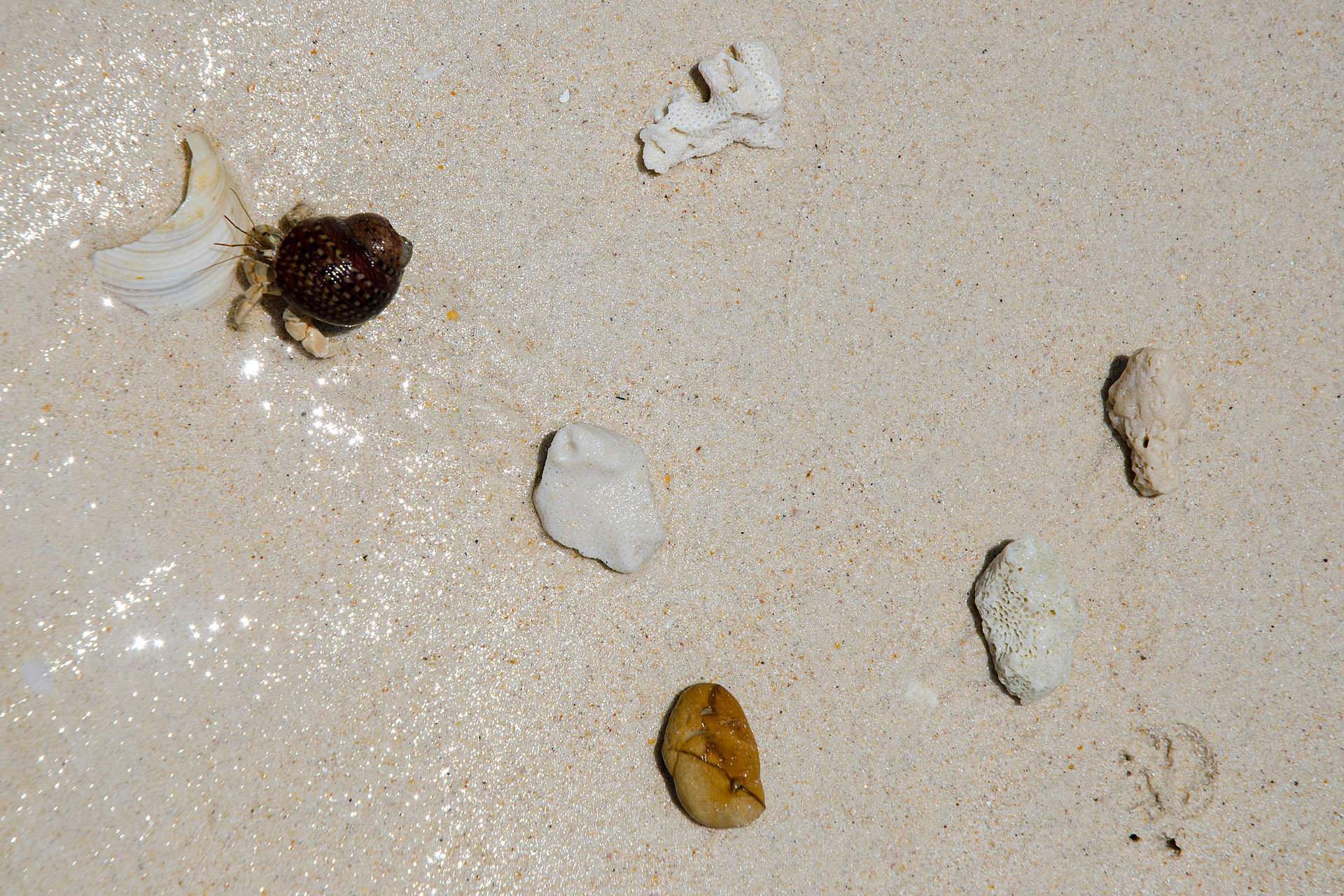 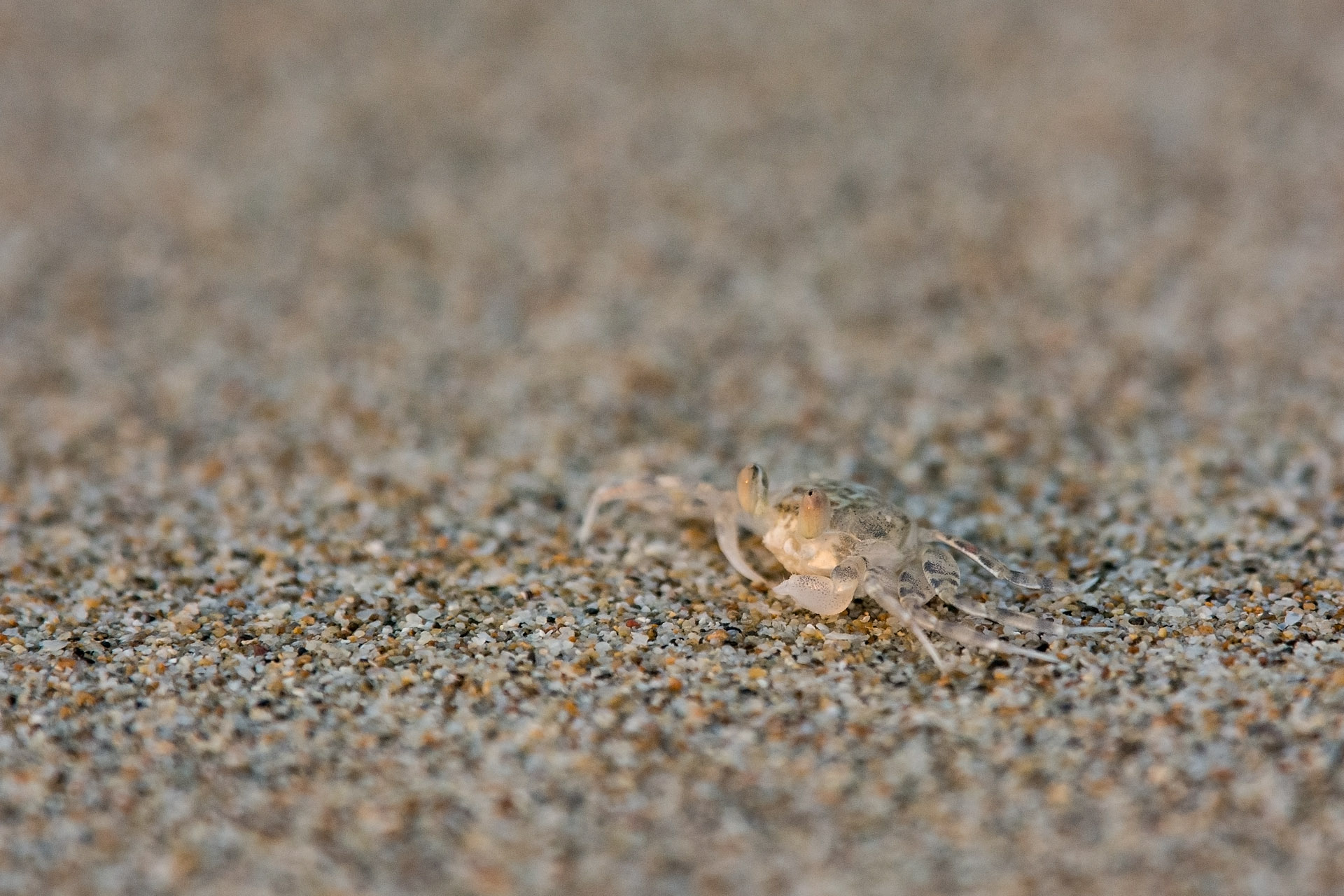 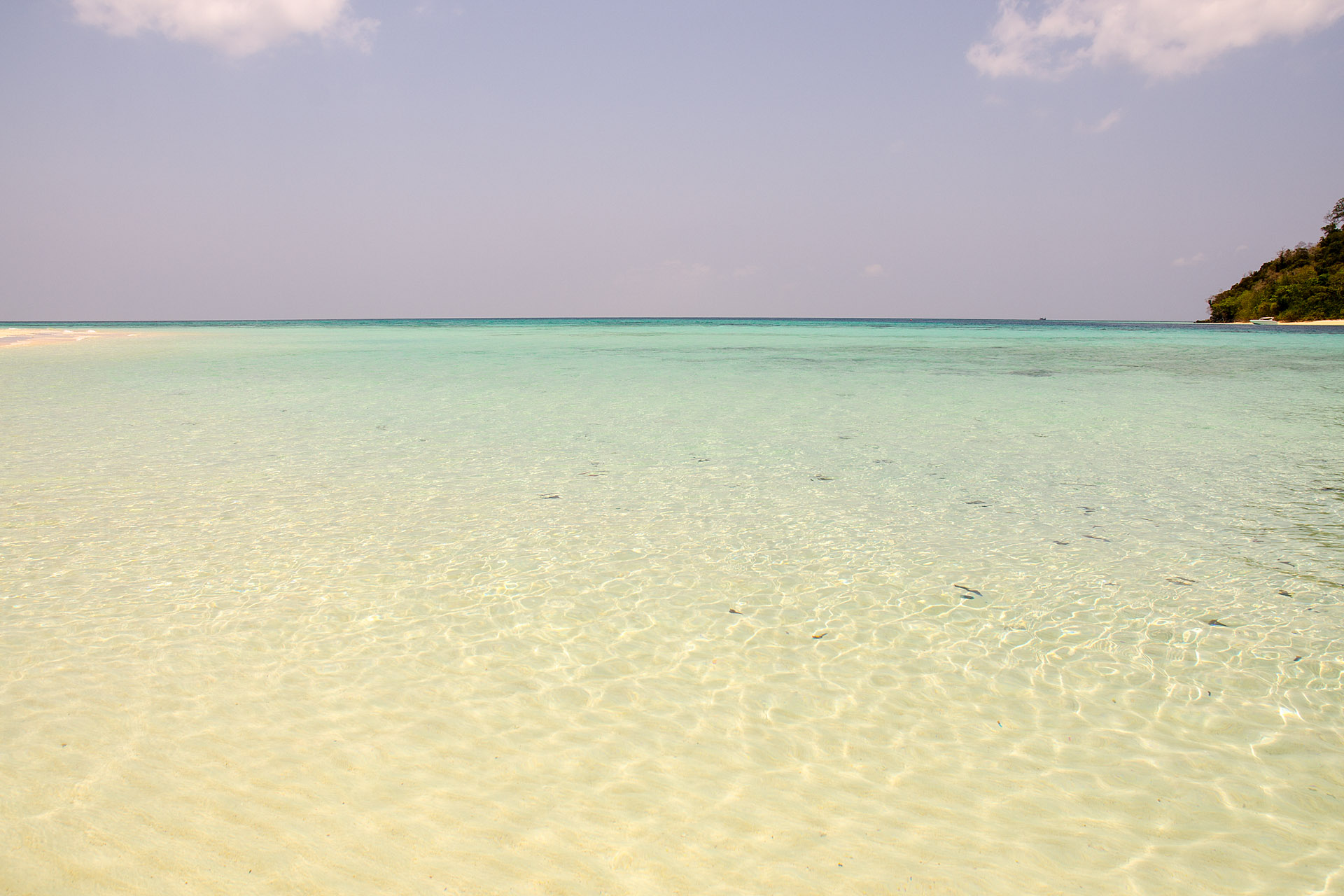 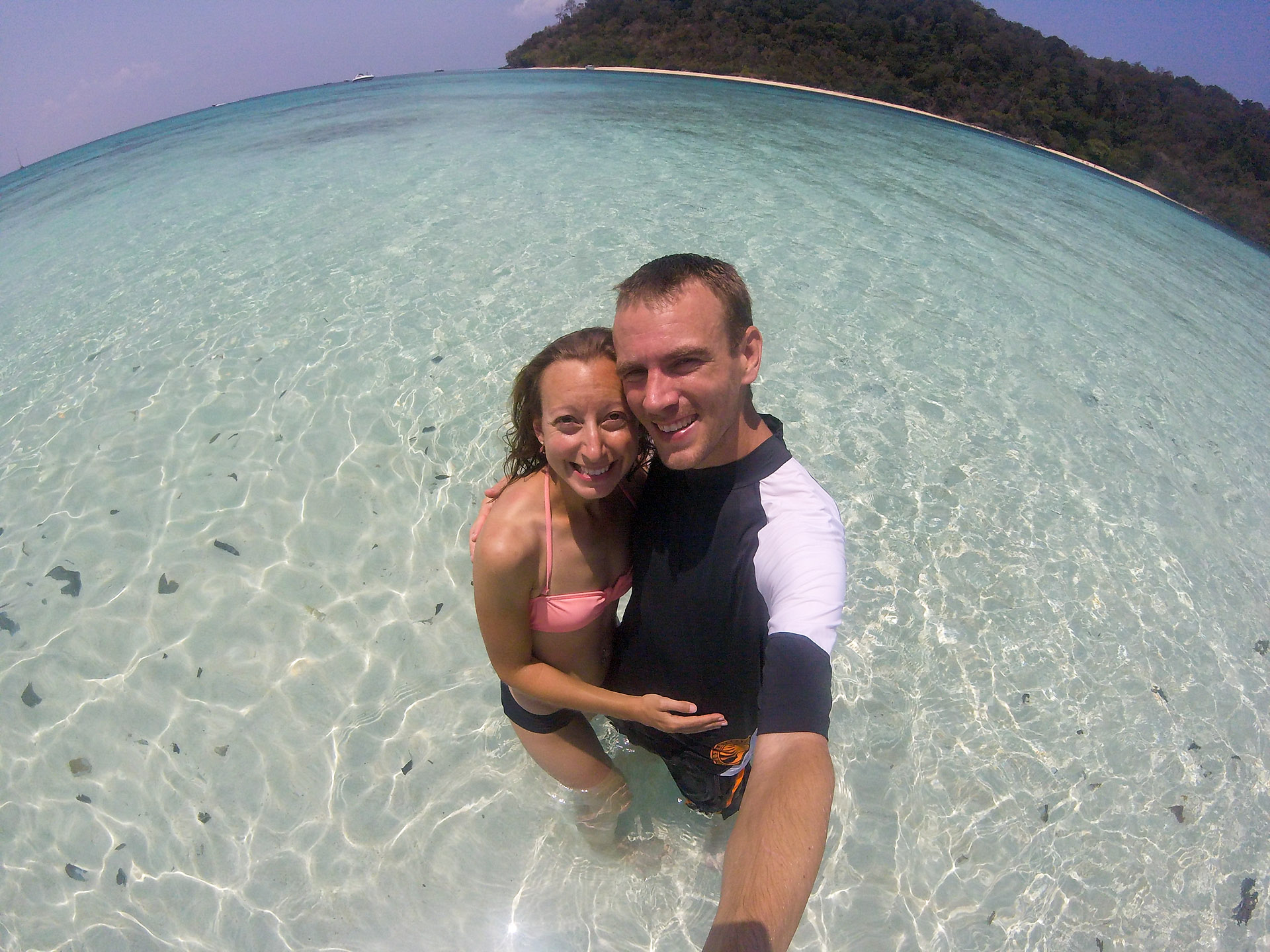 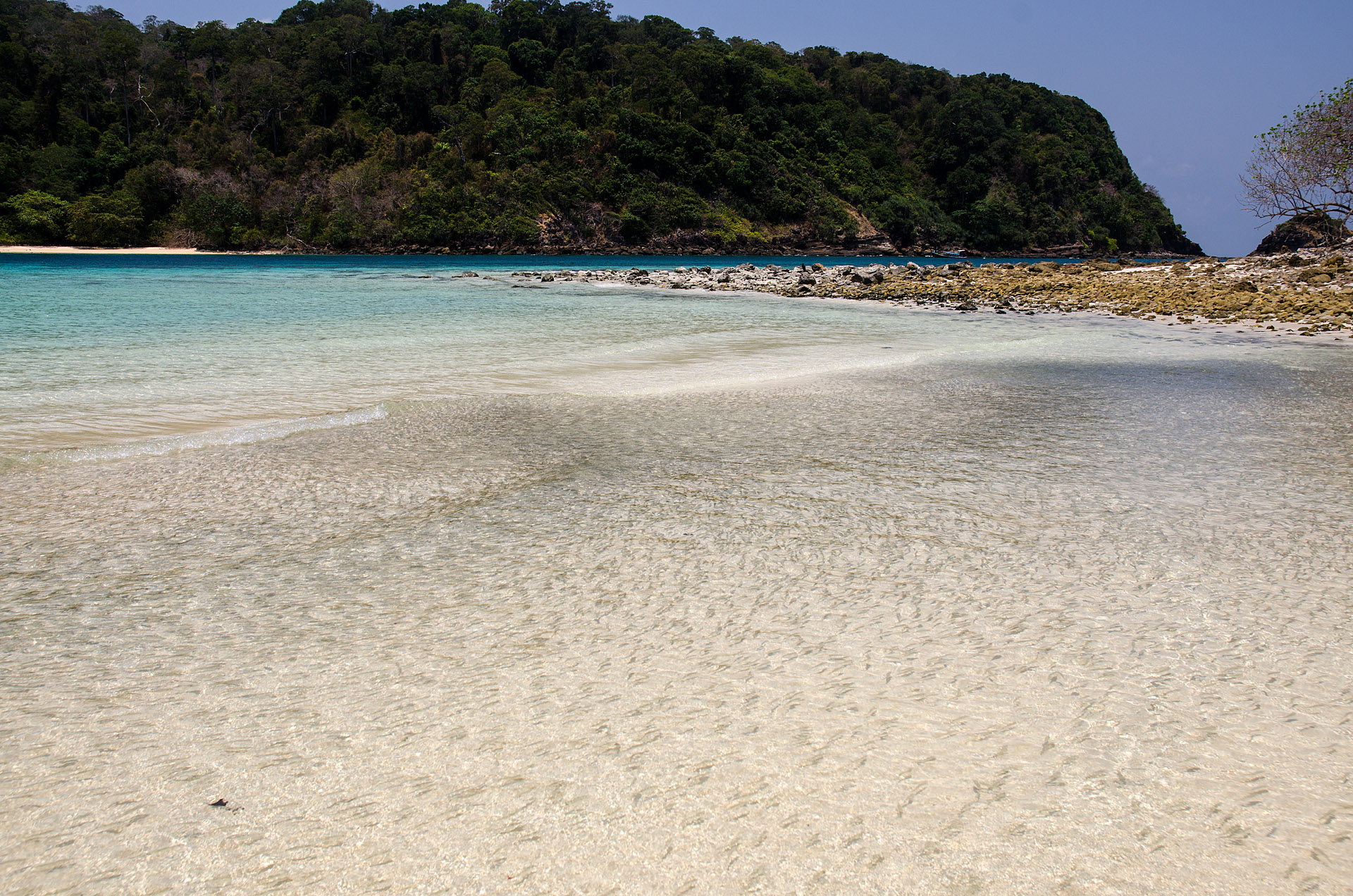 Although the reefs here paled in comparison to Lord Howe Island and the Great Barrier Reef, the snorkeling was still fairly reasonable. Overall, the reefs lacked the abundance of colorful, soft corals we saw previously and, regretfully, a good portion of the coral appeared either dead or bleached. This was likely a contributing factor to the decrease in fish and other marine life that we observed here. Although the density of underwater life was significantly reduced, we were still able to see a moderate diversity of tropical fish, including several species of wrasse and parrotfish, and a number of different butterflyfish, anemonefish, and rabbit fish. Additionally, we were introduced to a curious new critter here that we’d never seen before – the Christmas tree worm. As we investigated the reef, we noticed eye-catching yellow, orange, maroon, indigo, and turquoise wisps pinned to the hard coral. It looked as if someone had gone underwater with a Bedazzler to jazz up the bland, coral canvas for the reef’s aquatic residents. Named for their striking appearance, the tubular, marine worms sport a feathery exterior, with two ciliated spirals (radioles) used for filter feeding and respiration. 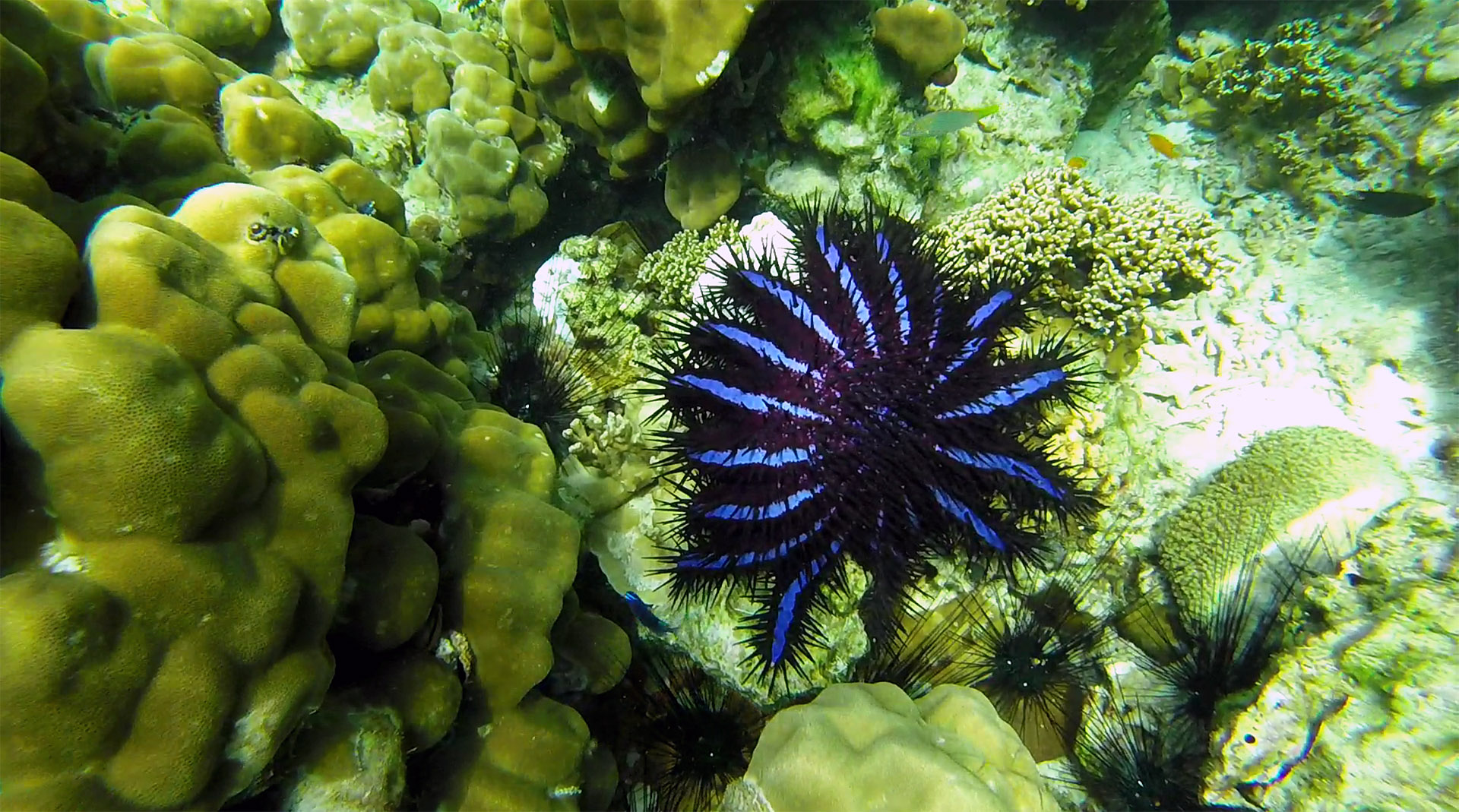 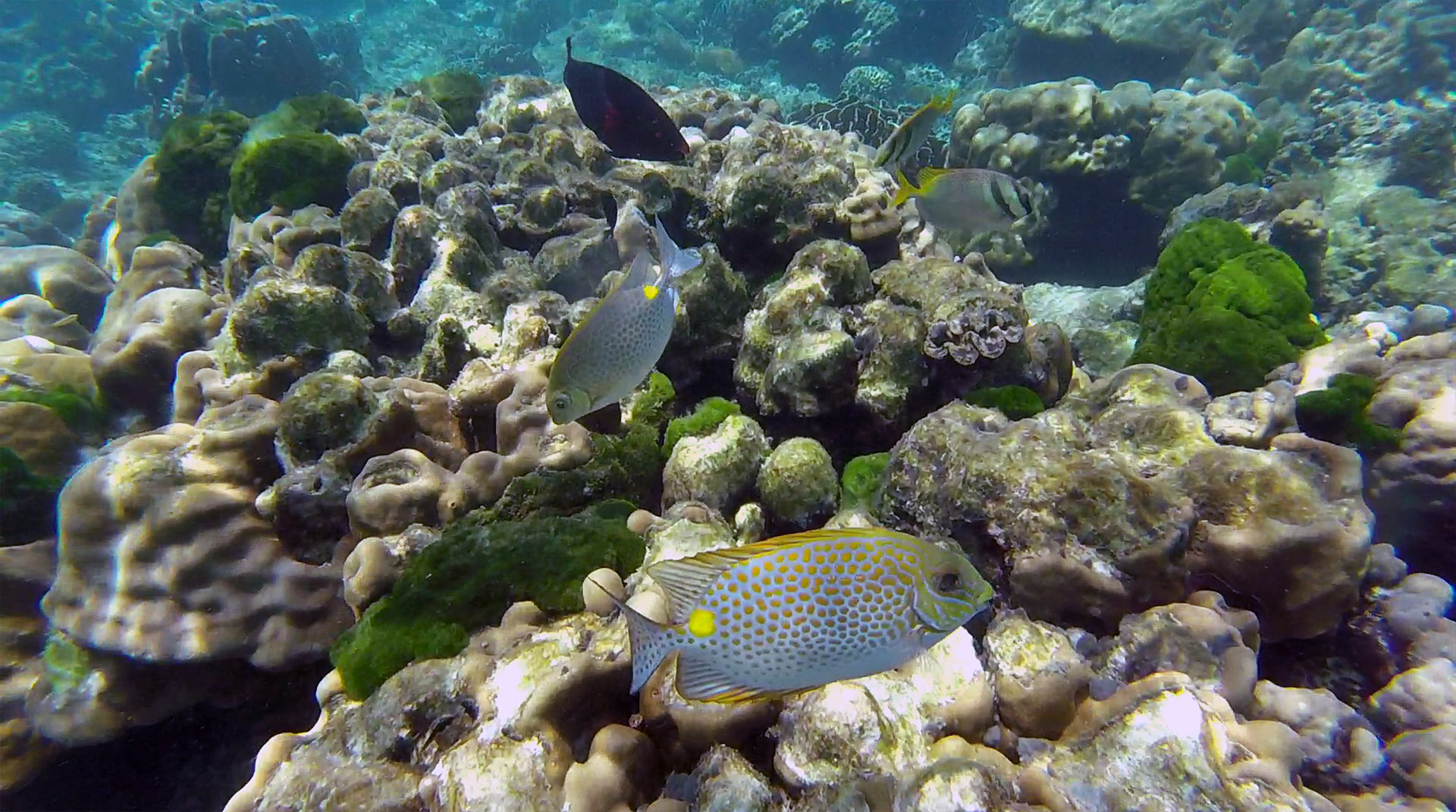 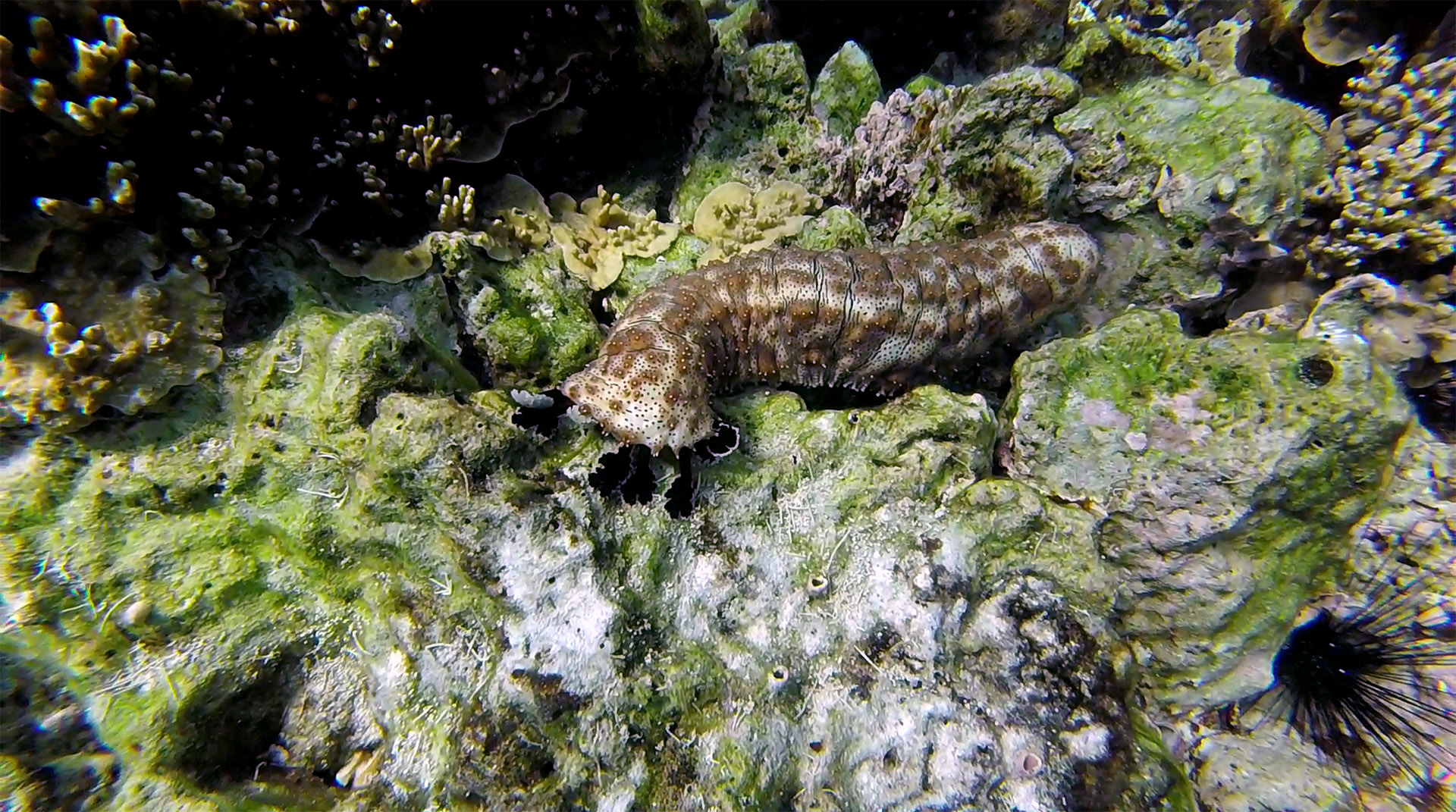 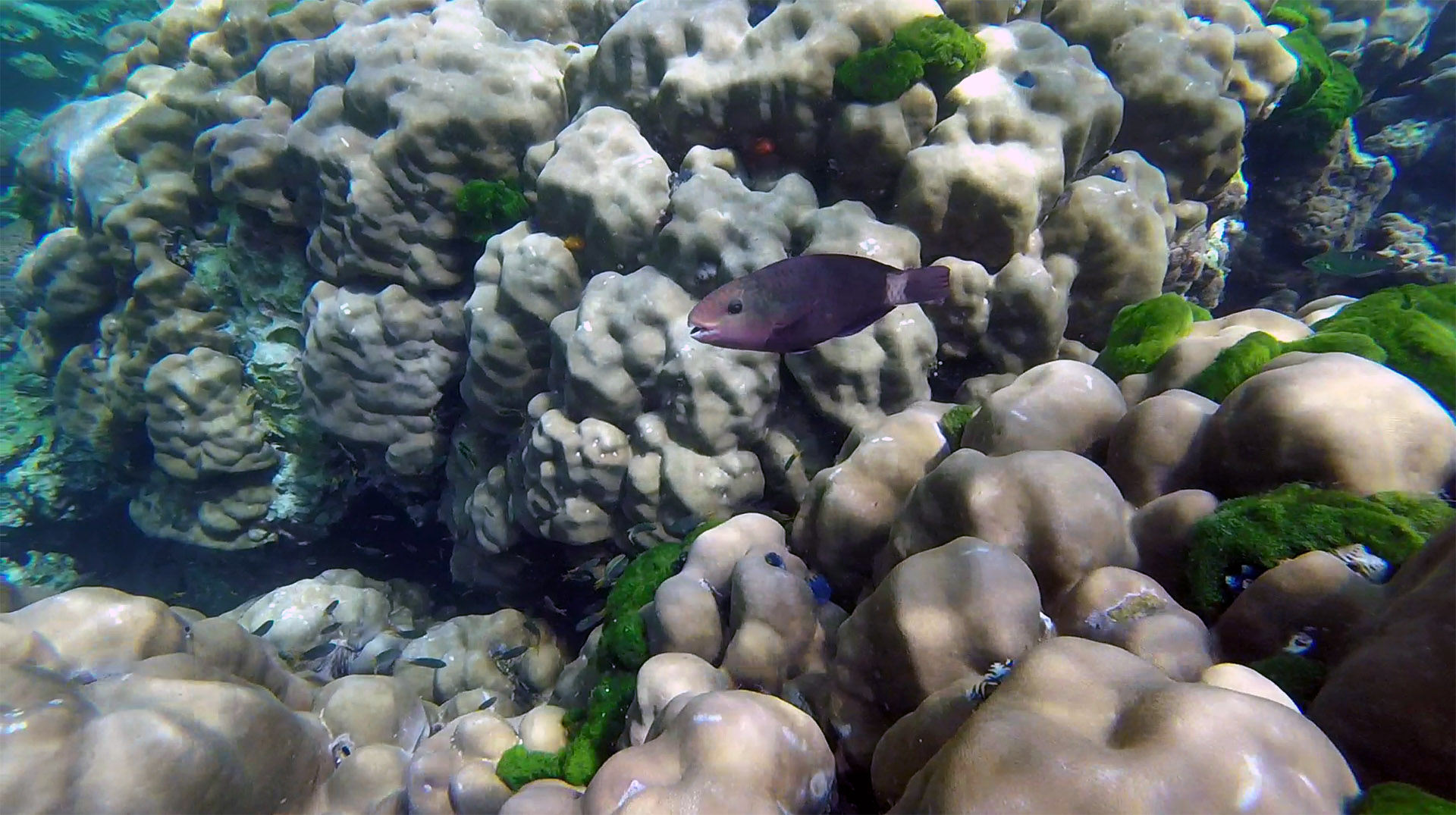 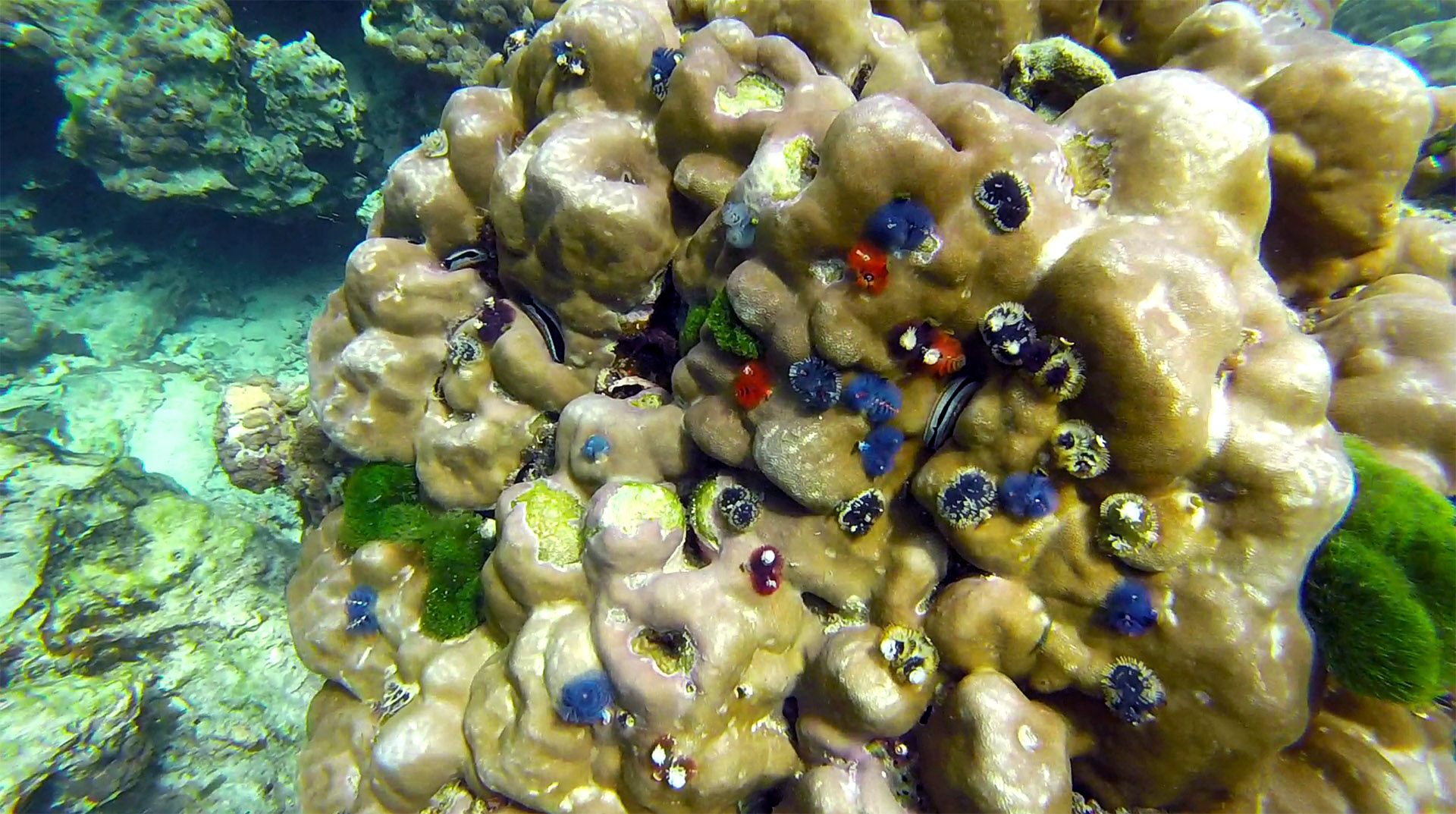 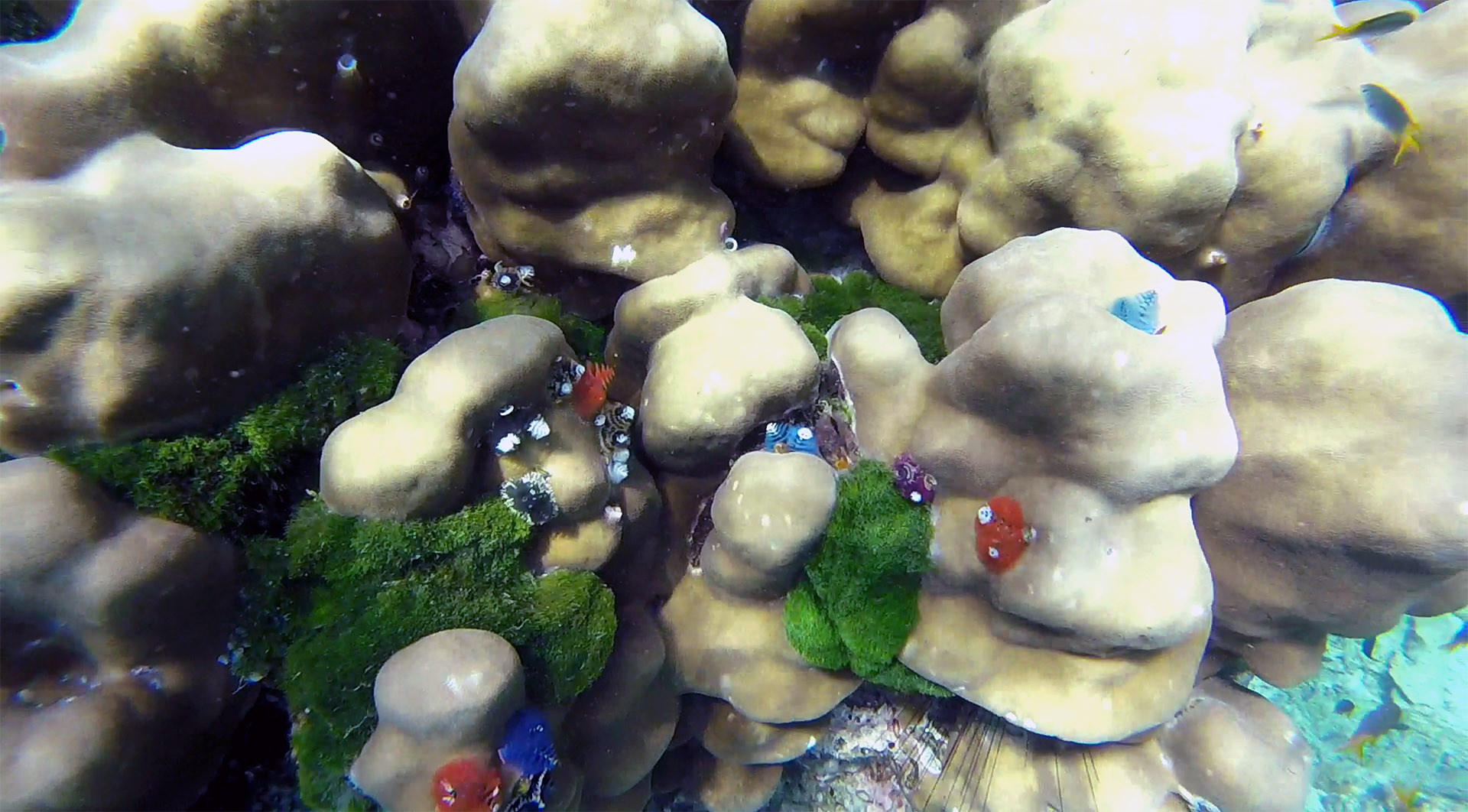 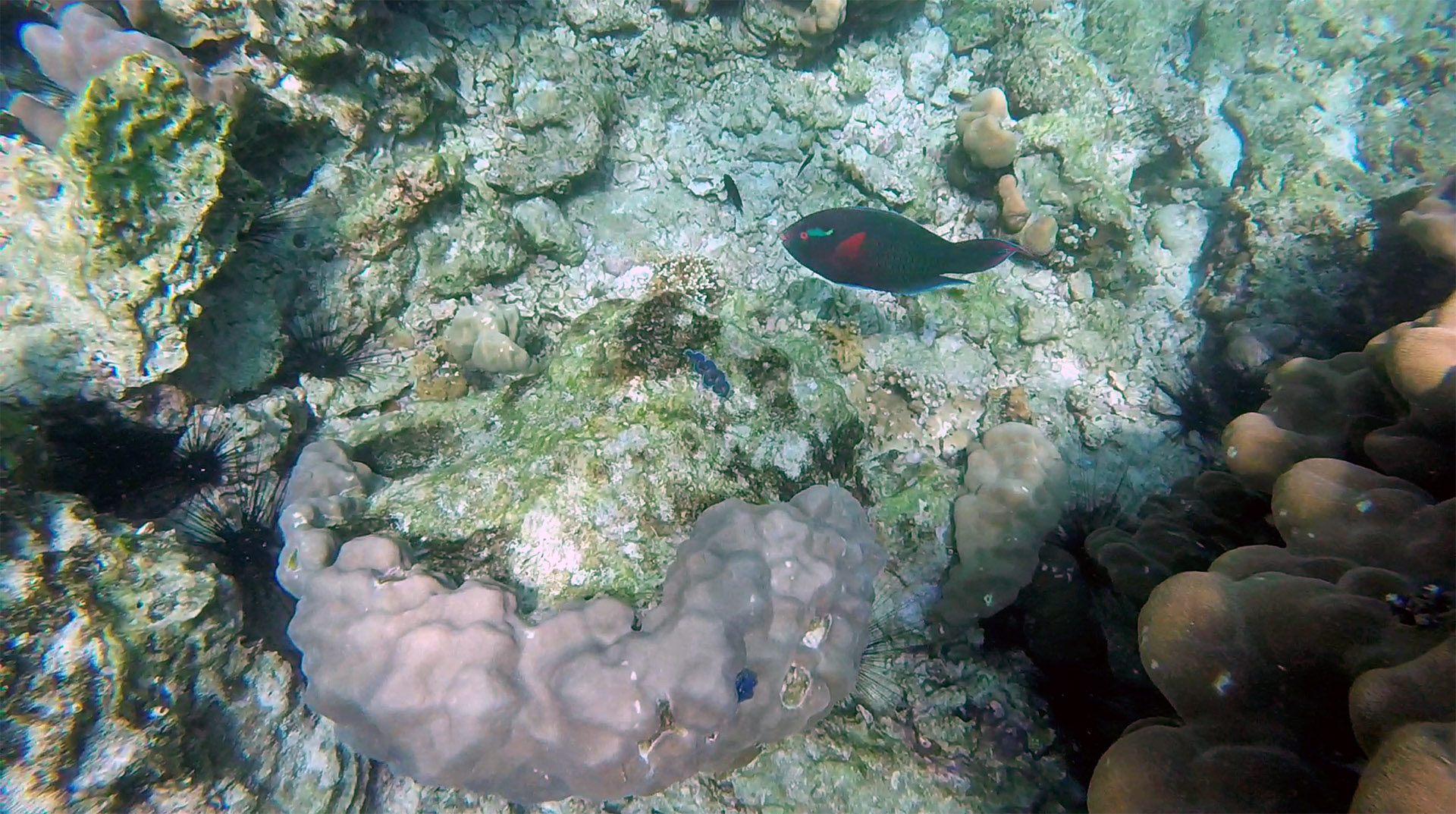 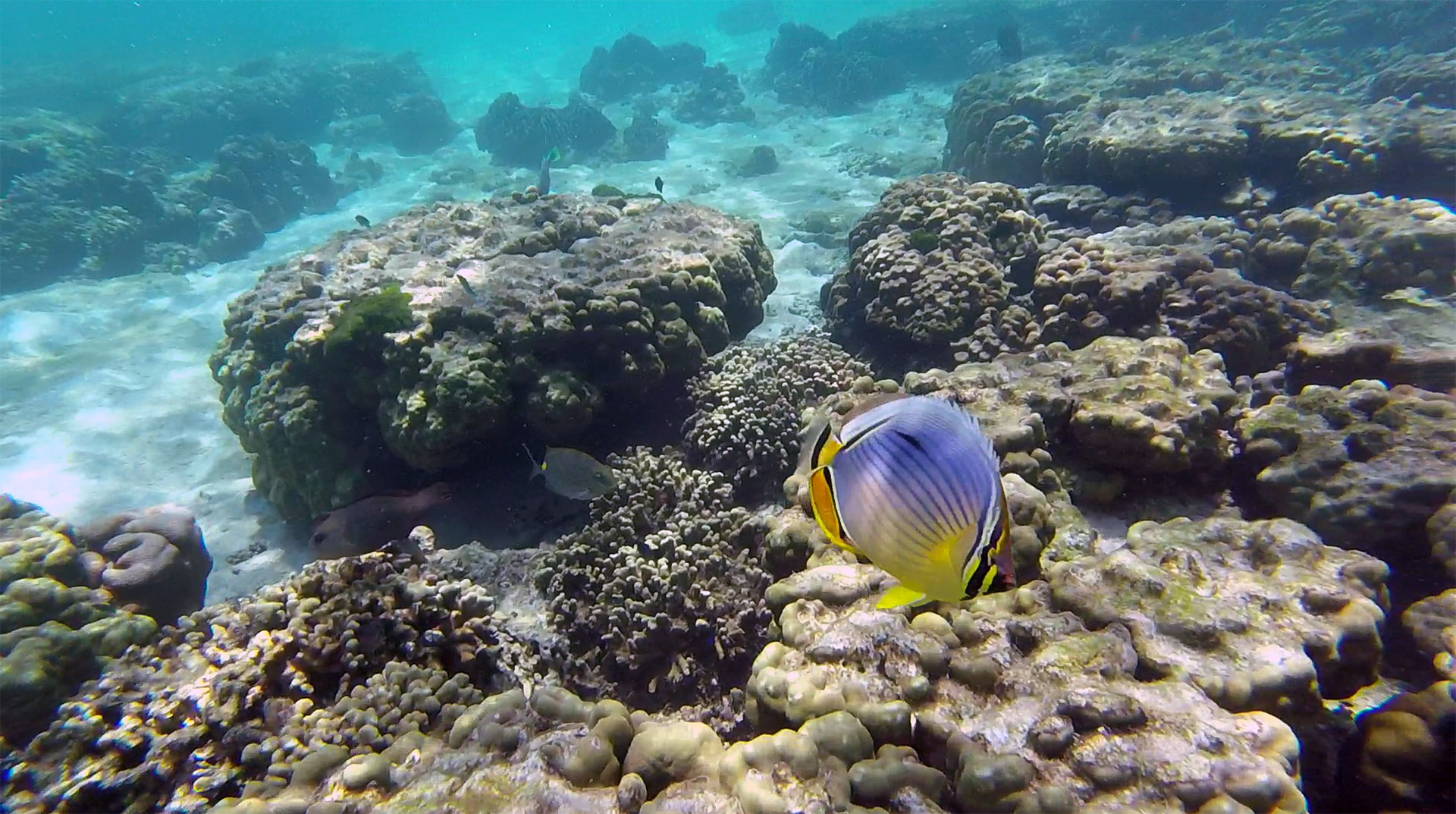 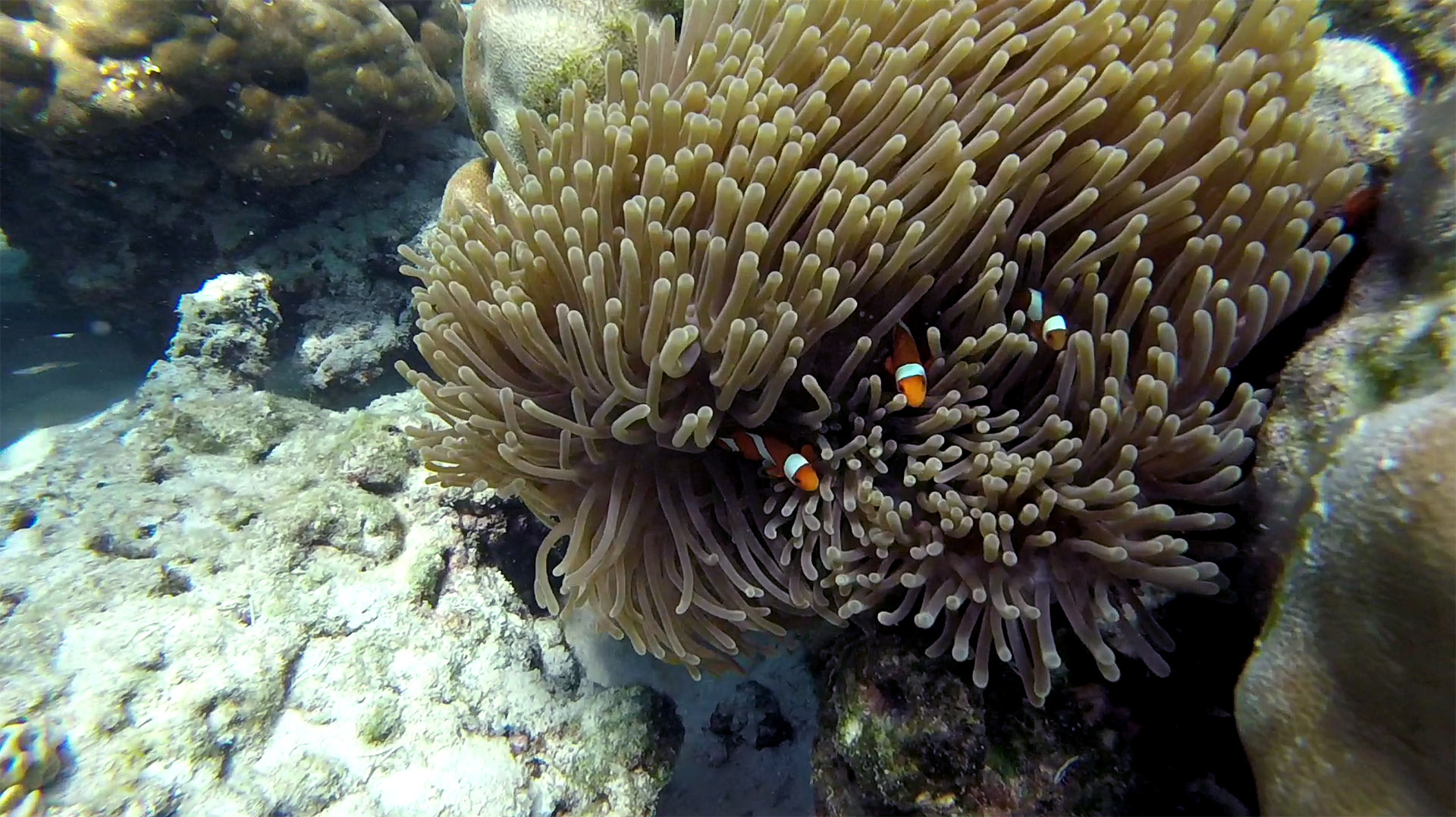 Interestingly, the reef was also littered with giant clams. While the bivalves here were much smaller than many that we saw off the Australian coast, they were much more abundant and captivatingly beautiful. As we skimmed over the top of the reef, flowery mantles of vibrant violet, blue and pink hues popped from the drab surroundings. Many were flecked with colorful polka dots, while several others displayed prominent striations – each its own unique fingerprint. As we examined the multihued mollusks, they’d abruptly clamp their shells shut, only to reopen them hesitantly moments later. 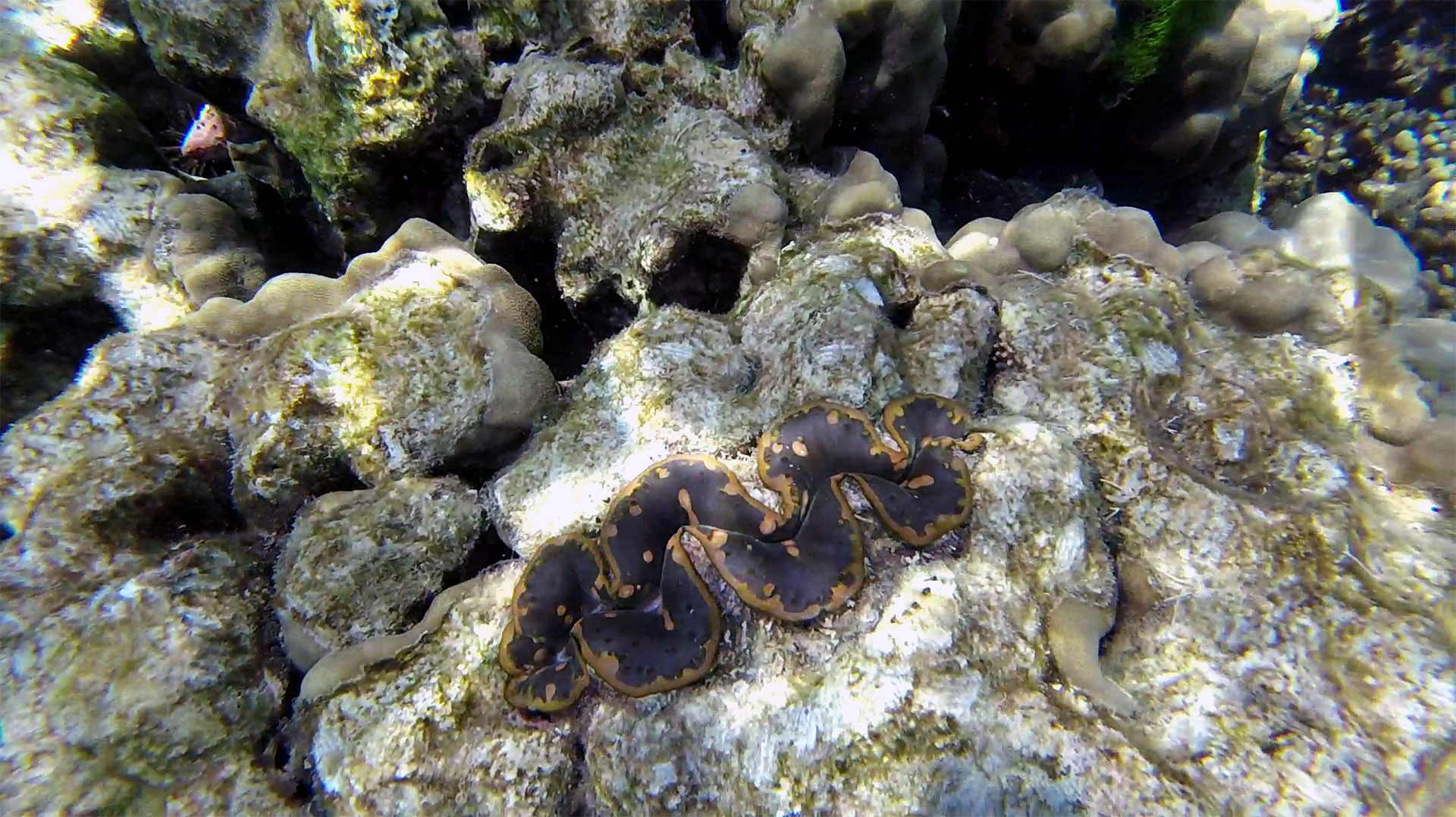 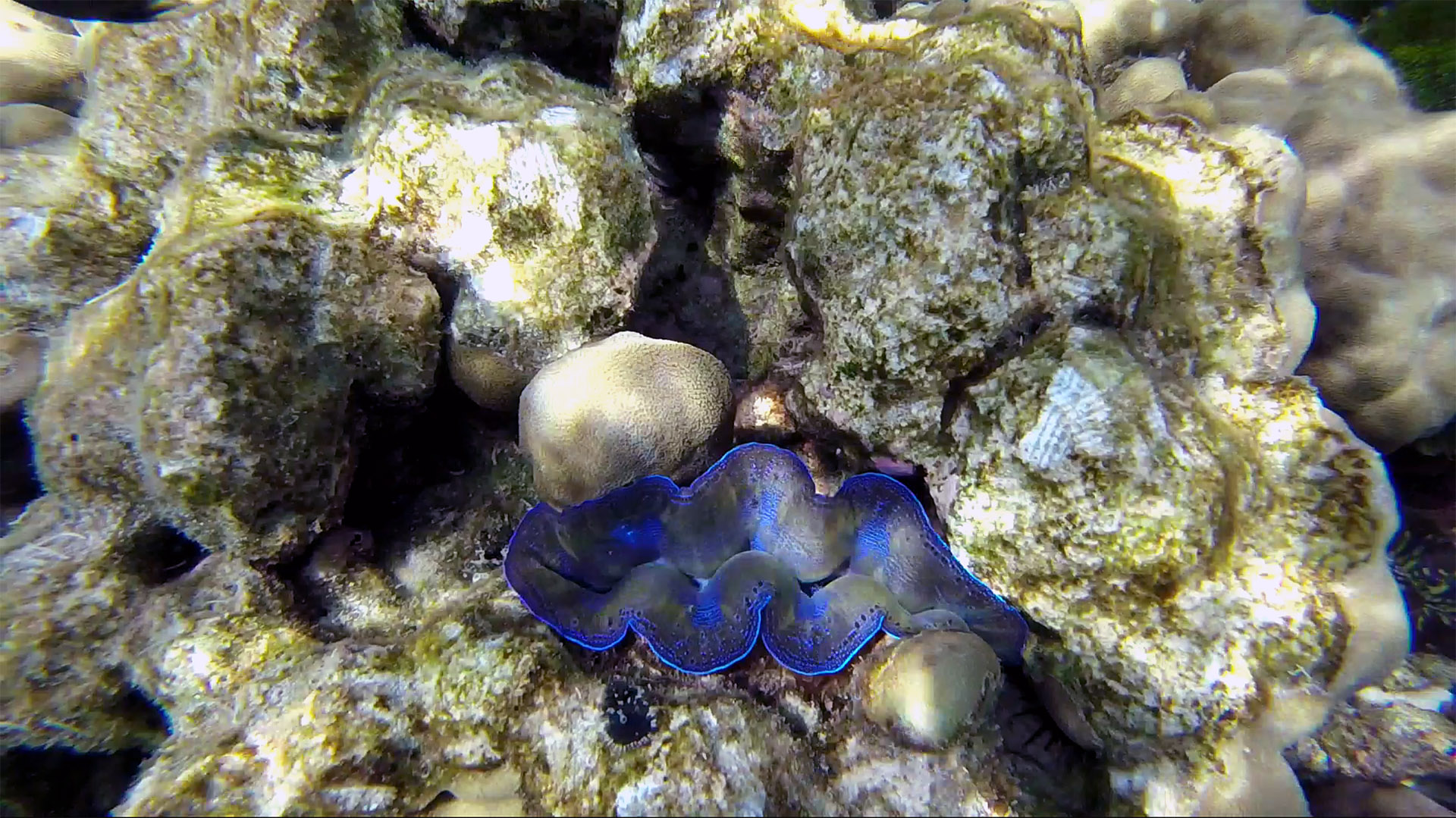 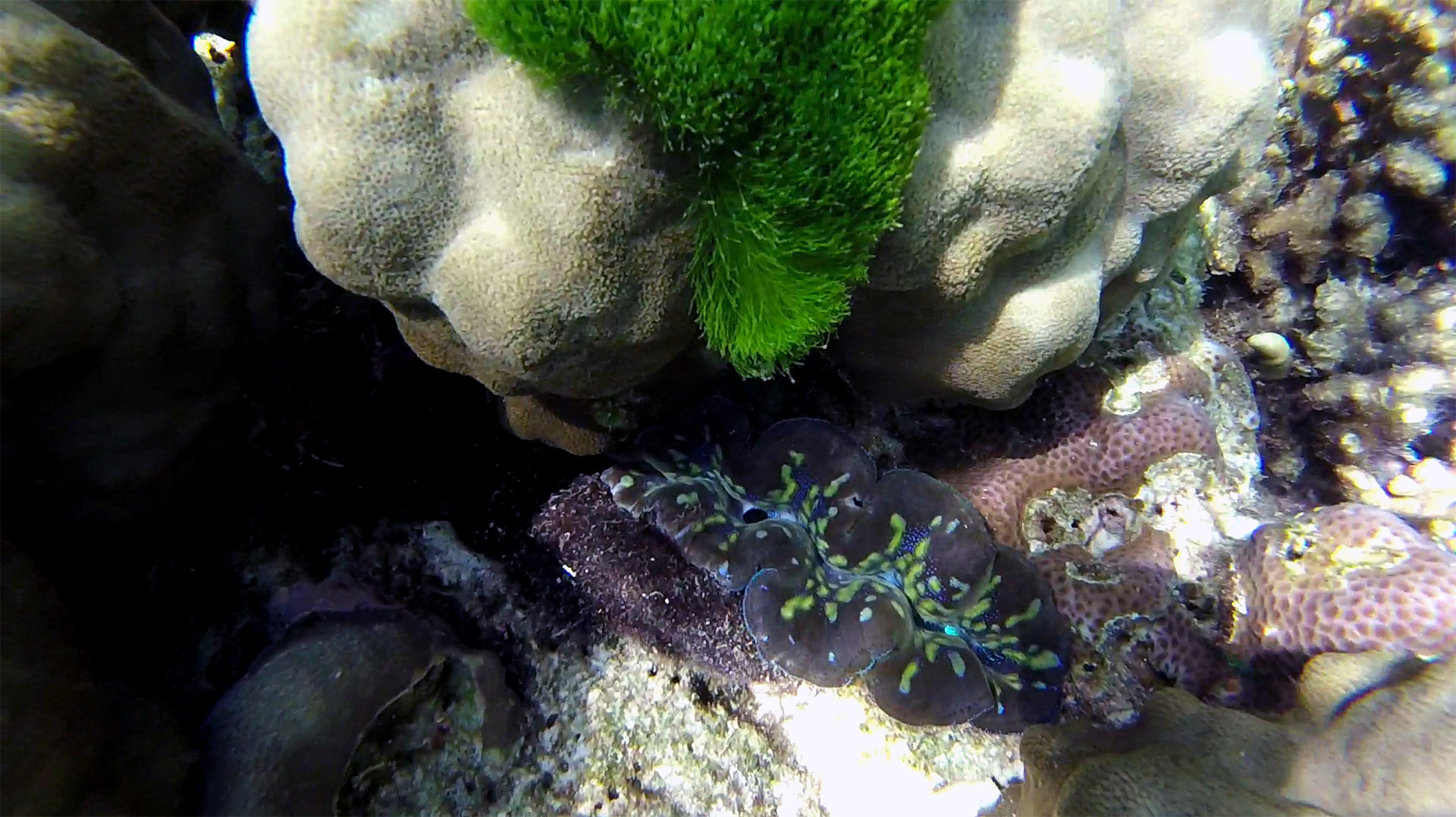 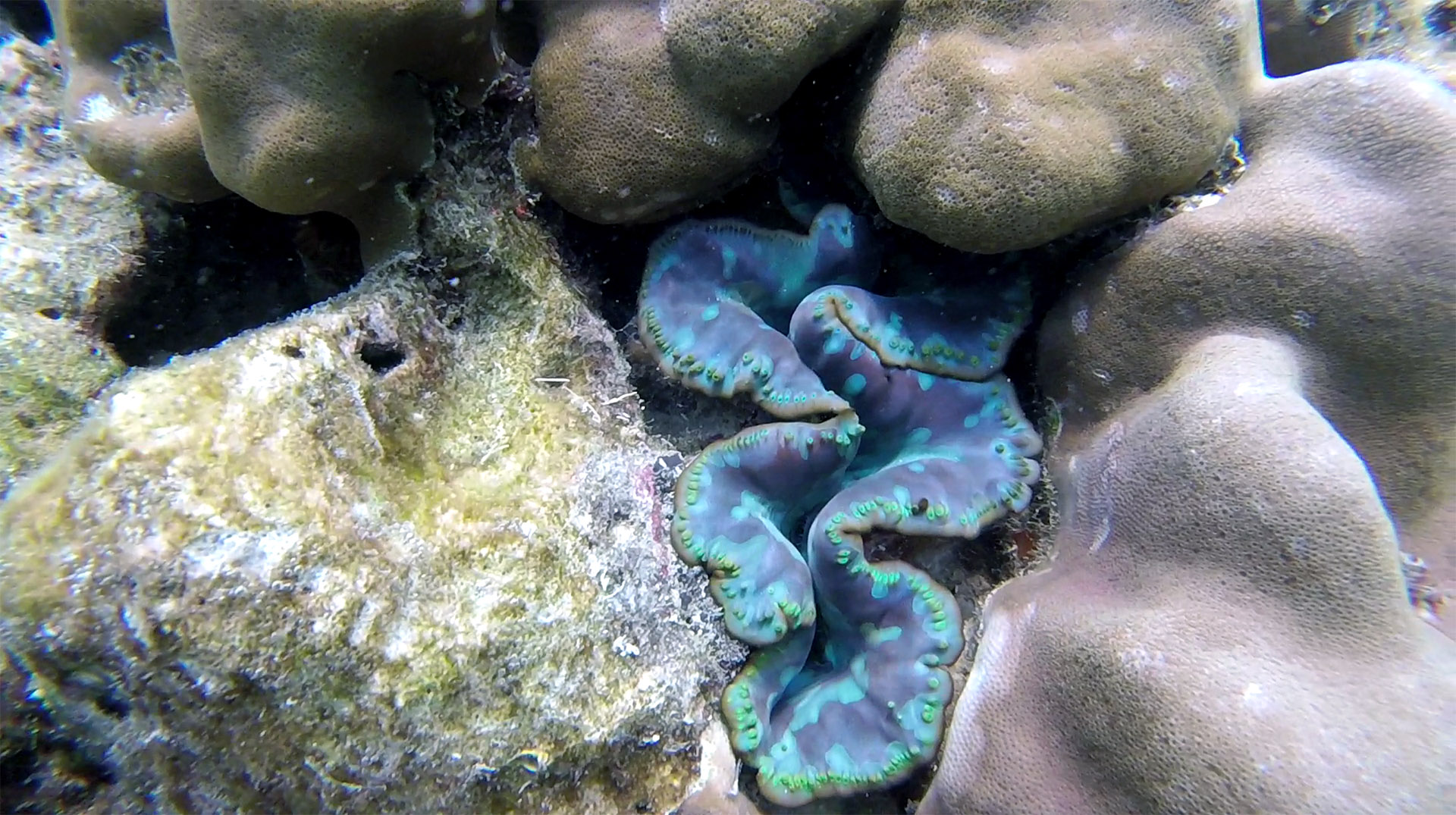 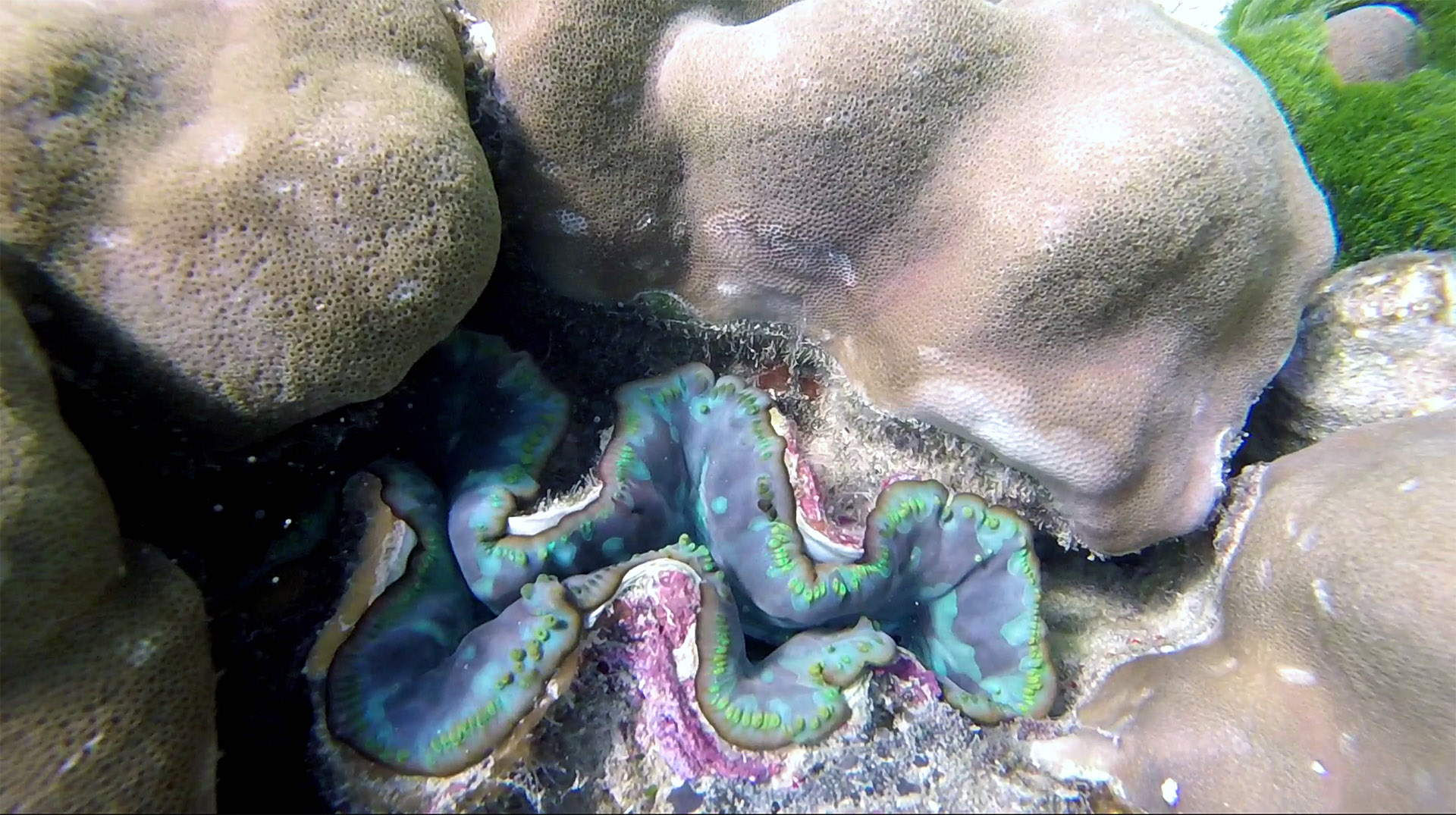