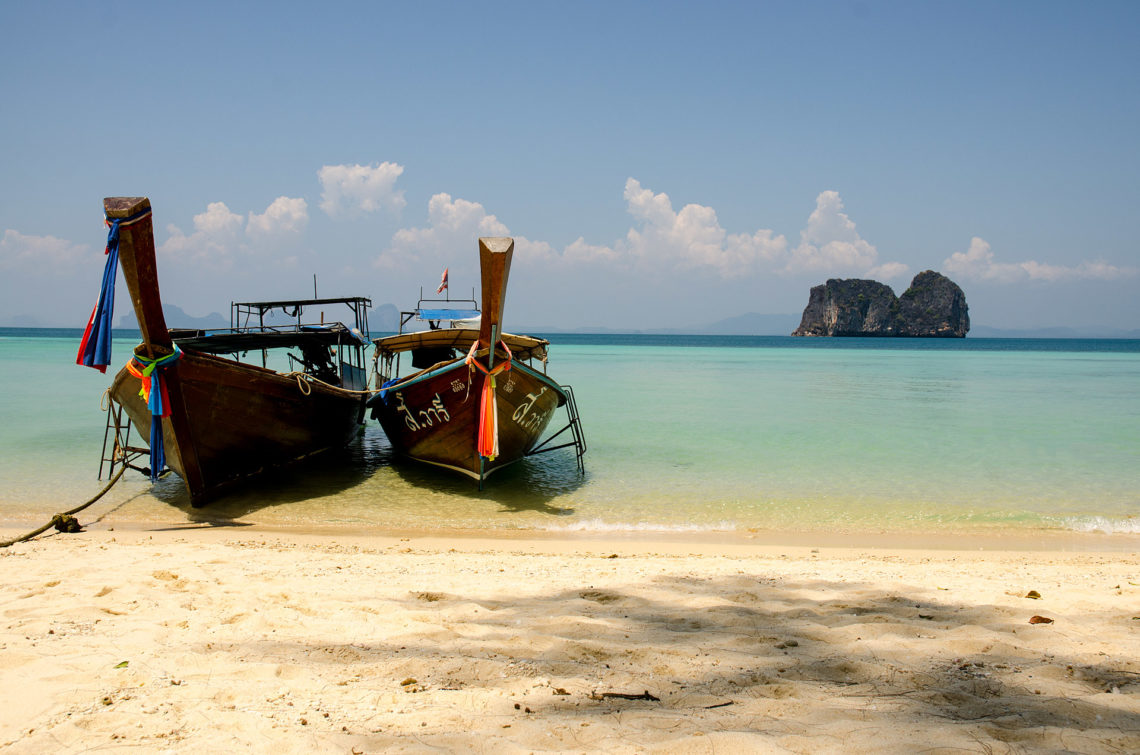 The second tour we opted for during our beach getaway took us on a 37-mile circuit southeast of Koh Lanta, stopping at four locations within the Trang islands along the picturesque Andaman Coast. Similar to Koh Rok, the day trip blended snorkeling with beach time; although this time we decided to do our island hopping via a traditional long-tail boat. The wooden vessels have a long history in southeastern Asia, and are a pretty relaxing way to spend a day on the water. The design is quite simple – a car engine is fastened to a long pole with a small propeller at the end, and the mechanism can move 180° to steer the small craft. That said, transport by long-tail boat is obviously significantly slower than by speedboat, but it really is a fun ride. An added bonus – because the boats are much smaller, the group size shrinks accordingly (we had only 11 other passengers on our tour). 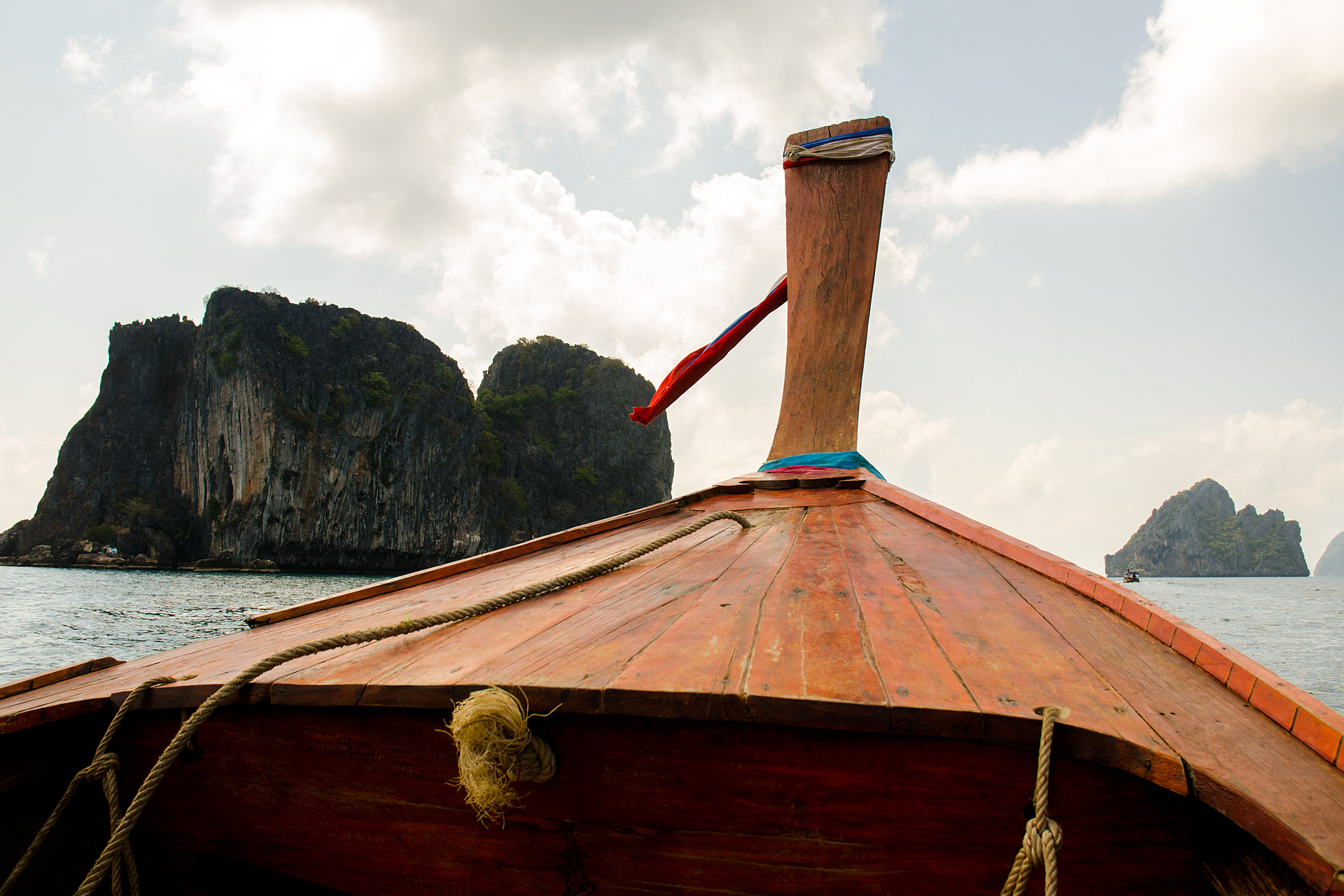 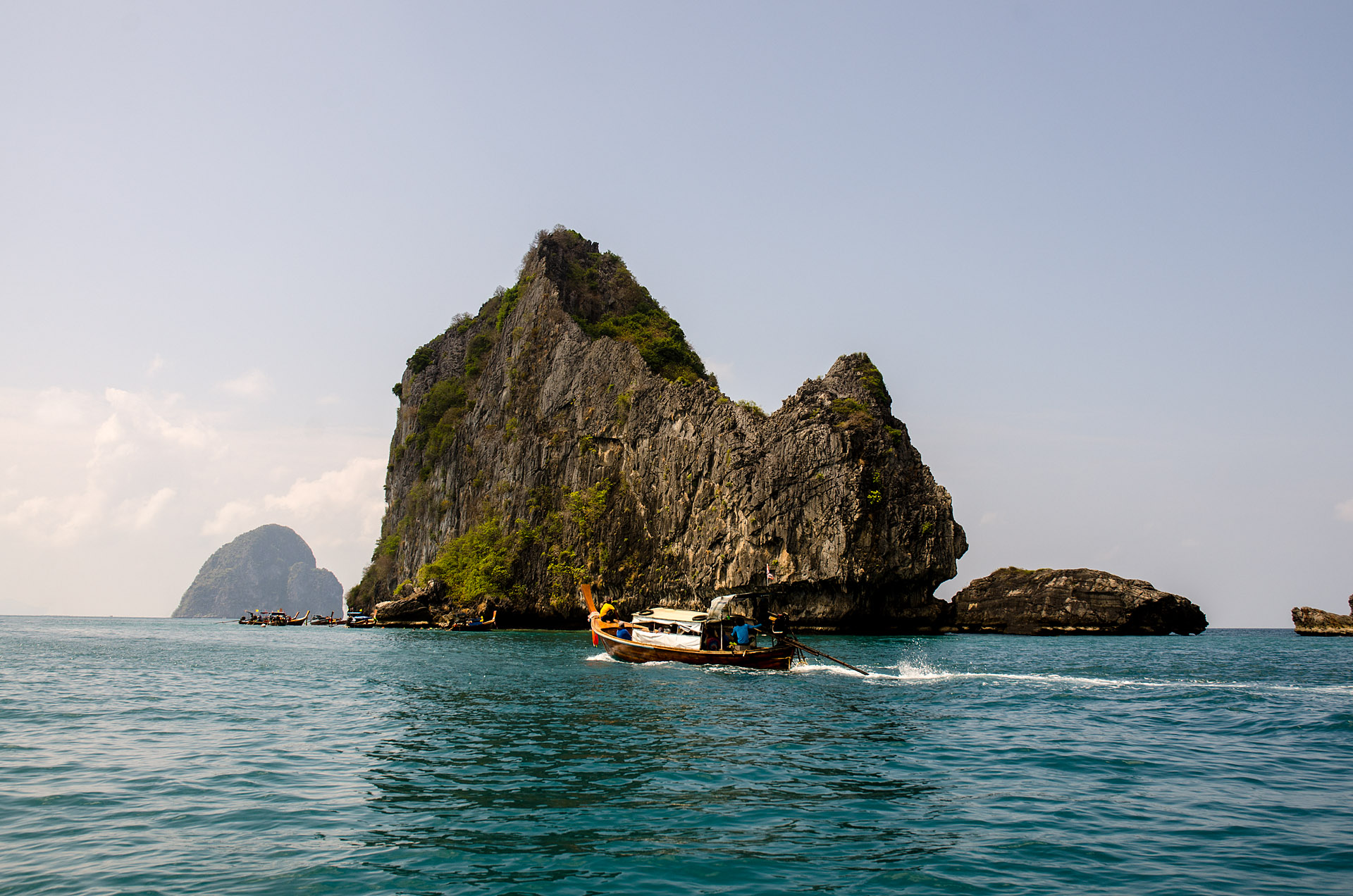 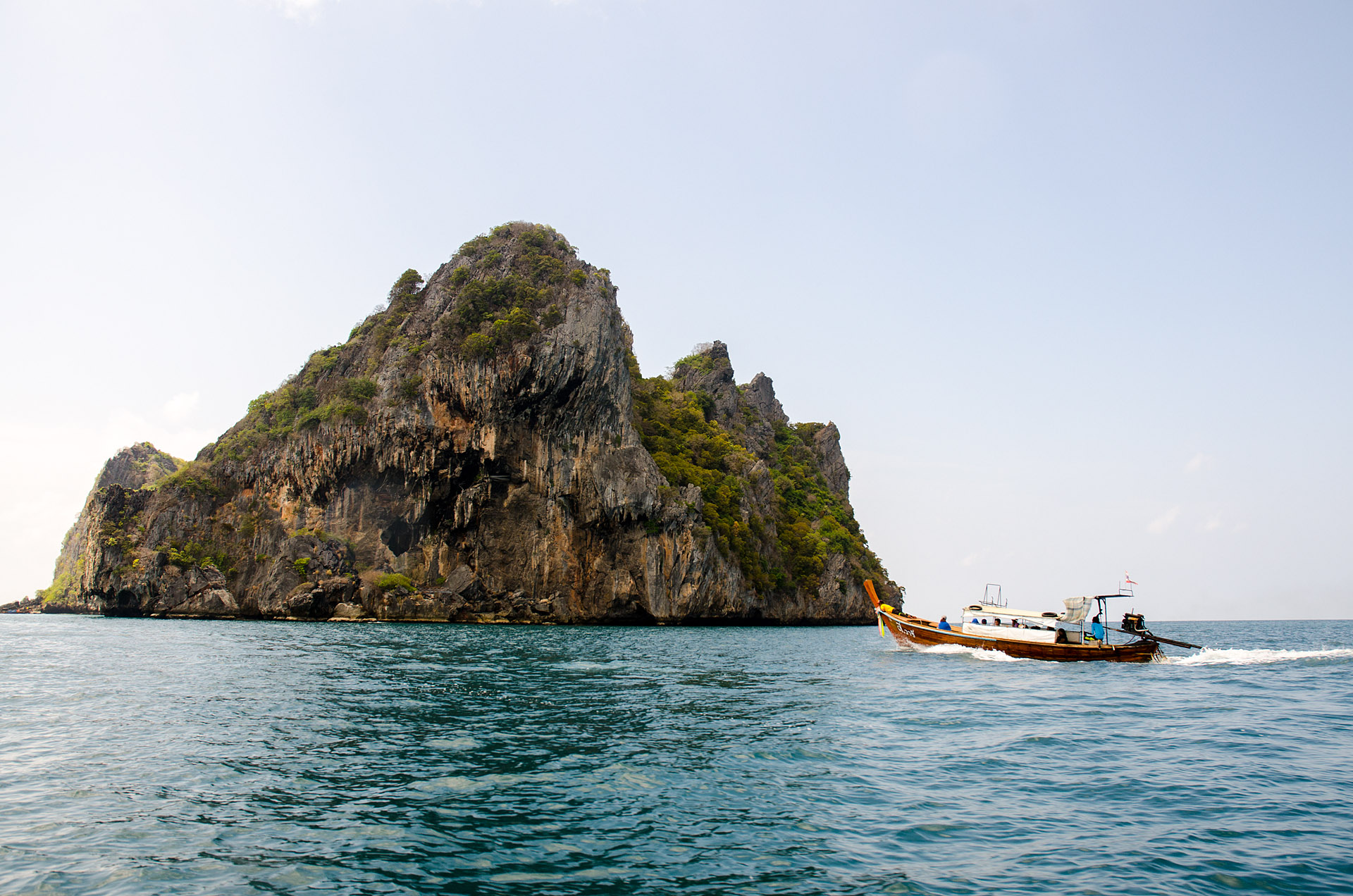 For snorkeling, we visited the small islets of Koh Kraden and Ko Cheuk. Unfortunately, the snorkeling wasn’t stellar at either site, though it was noticeably better along the shallow reef of Koh Kraden. The seafloor here was covered with large urchins, and we encountered a particularly chummy pair of Moorish Idols. Typically, the fish seem a bit shy, but these guys were hamming it up for the camera. That said, we have no footage of the beautiful fish because, woefully, the brand new GoPro bit it mid-snorkel. Somehow, some water seeped into the allegedly waterproof/virtually indestructible little gadget and shorted out the memory card. Major bummer. However, we’ve been in touch with GoPro, and they are willing to replace the camera. We just need to figure out how to receive mail when we have no address, and aren’t even sure where we’ll be more than a week in advance (and if it’s even possible). Anyway, here’s the very little bit we were able to recover from the otherwise mediocre snorkel: 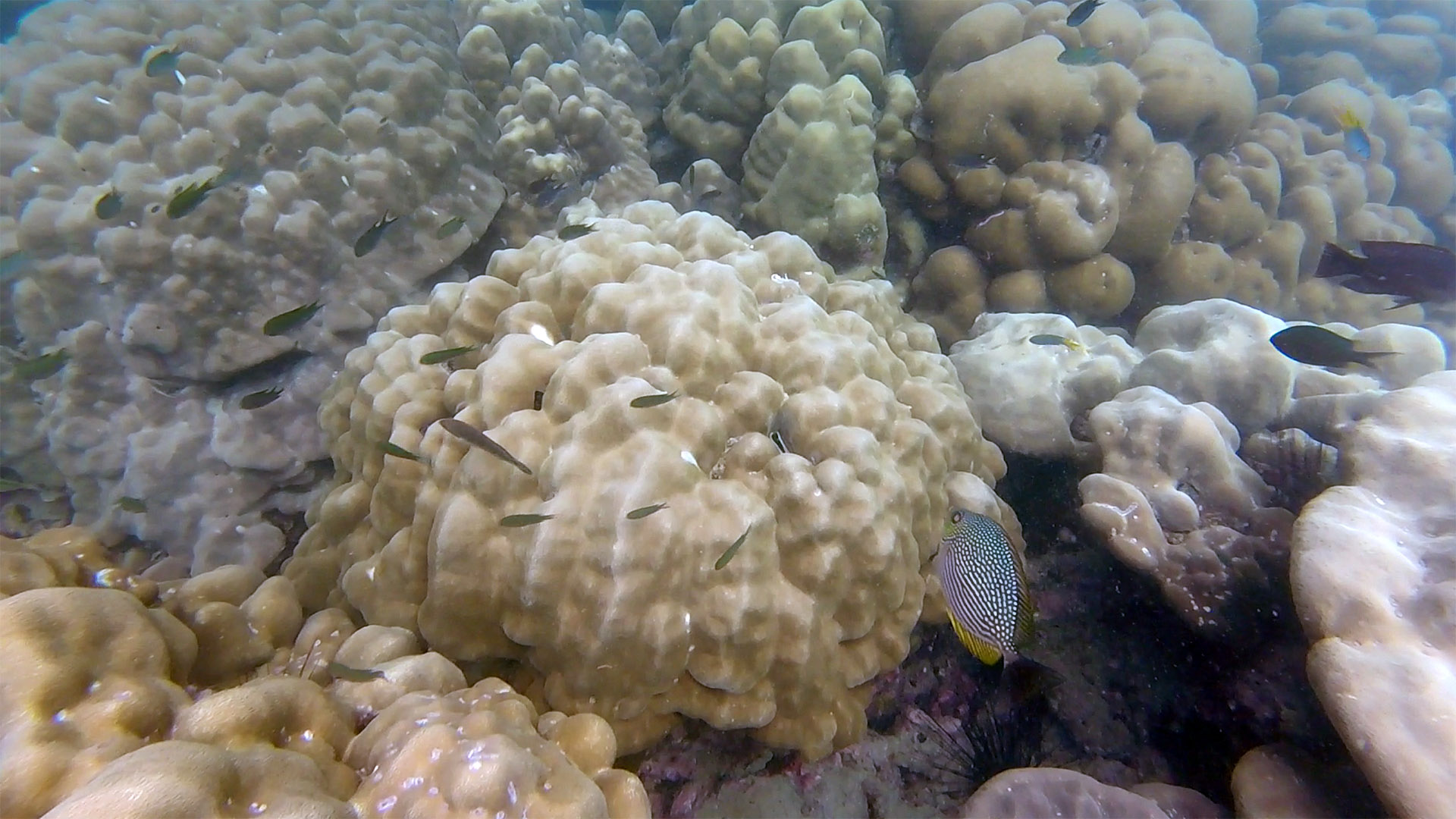 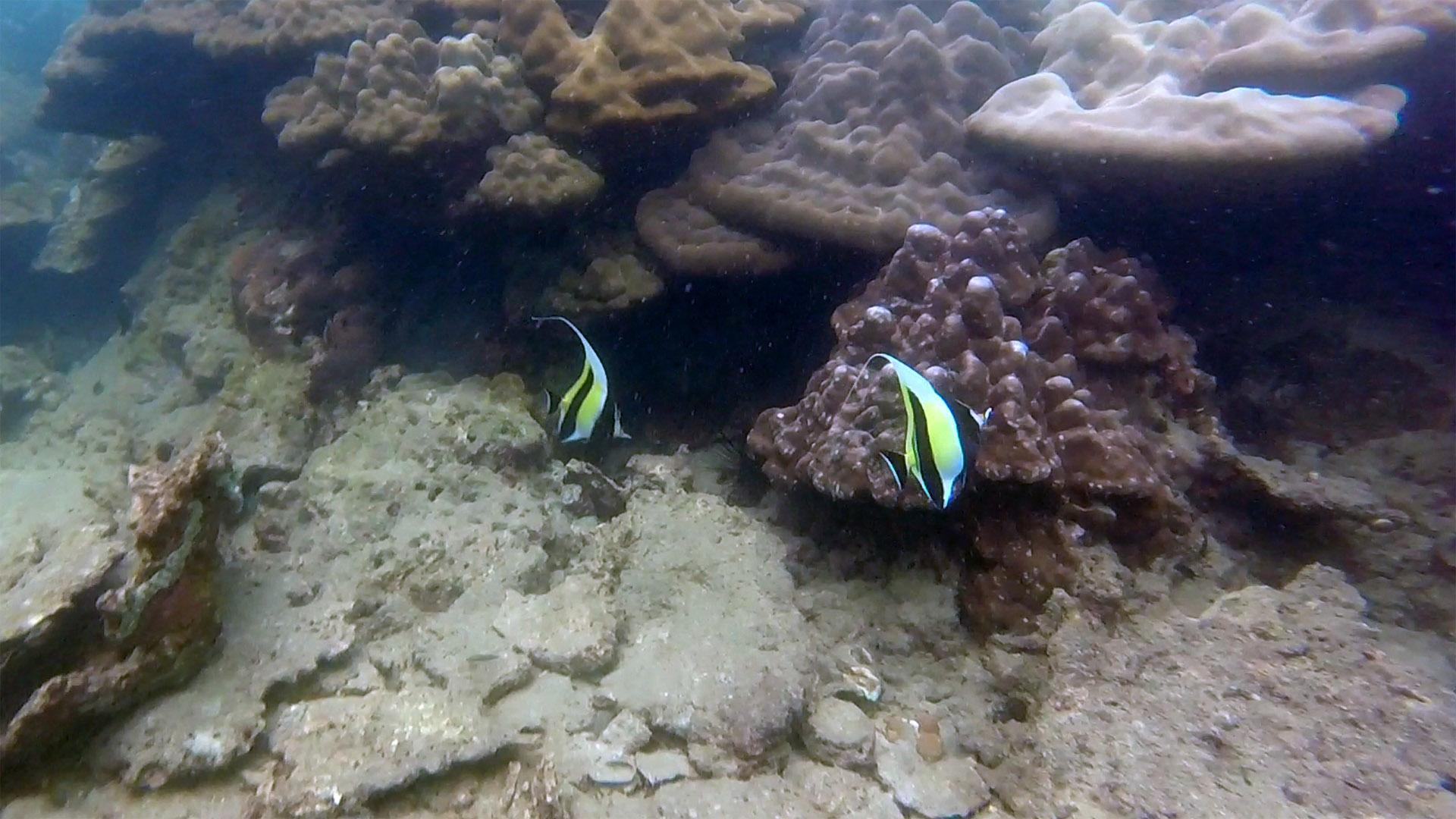 Our third stopover was at the Emerald Cave (Tham Morakot) on Koh Muk. In theory, the Emerald Cave sounds like a pretty cool place – a “secret” cove that was once used by pirates and looters to stash their plundered goods. Beyond the cave, a “hidden” lagoon lies on the interior of the island, with a small beach accessible only at low tide, when it’s possible to swim through the chamber and reach the cove at the other side. The one major flaw here – the secret is out, and the Emerald Cave is severely overrun with boats full of tourists. If they could somehow significantly cut down on the number of people allowed in the site at once, I’m sure it could be a cool experience. The cave is about 80 meters (260 feet) long, and has a 90° bend, creating total darkness for a short portion of swim. Upon exiting the cave inside the island, the lagoon is rather lovely, with vertical, rocky walls towering on all sides. However, the number of other people crowding the tiny beach made it so unbearable we didn’t even snap a photo. Overall, we found the cave to be a completely overrated disappointment.

Luckily, the best was saved for last and, for me, the final island made the entire journey worth it. Tucked away on Koh Ngai’s eastern shore was easily one of the most stunning beaches I have ever seen. Here, a white ribbon of sand gave way to the most intense shade of turquoise water I’ve ever seen, extending hundreds of meters beyond the shoreline thanks to a shallow sandbar. In the distance, a smattering of the country’s iconic, steep, furrowed, limestone islands rose sharply from the sea’s tranquil surface. The only vessels with access to the shallow shore appeared to be the more undersized and maneuverable long-tail boats, leaving the beach nearly devoid of visitors. This exquisite corner of the Andaman Sea was quite possibly the most perfect water on the planet for a swim – flawless turquoise ripples that shimmered in the penetrating sunlight, a pleasing 30°C (86°F), and no worries of dangerous box jellies or other hazardous creatures. I was completely enchanted in that water, and could have stayed on that sandbar forever. This was my definitive happy place in Thailand. 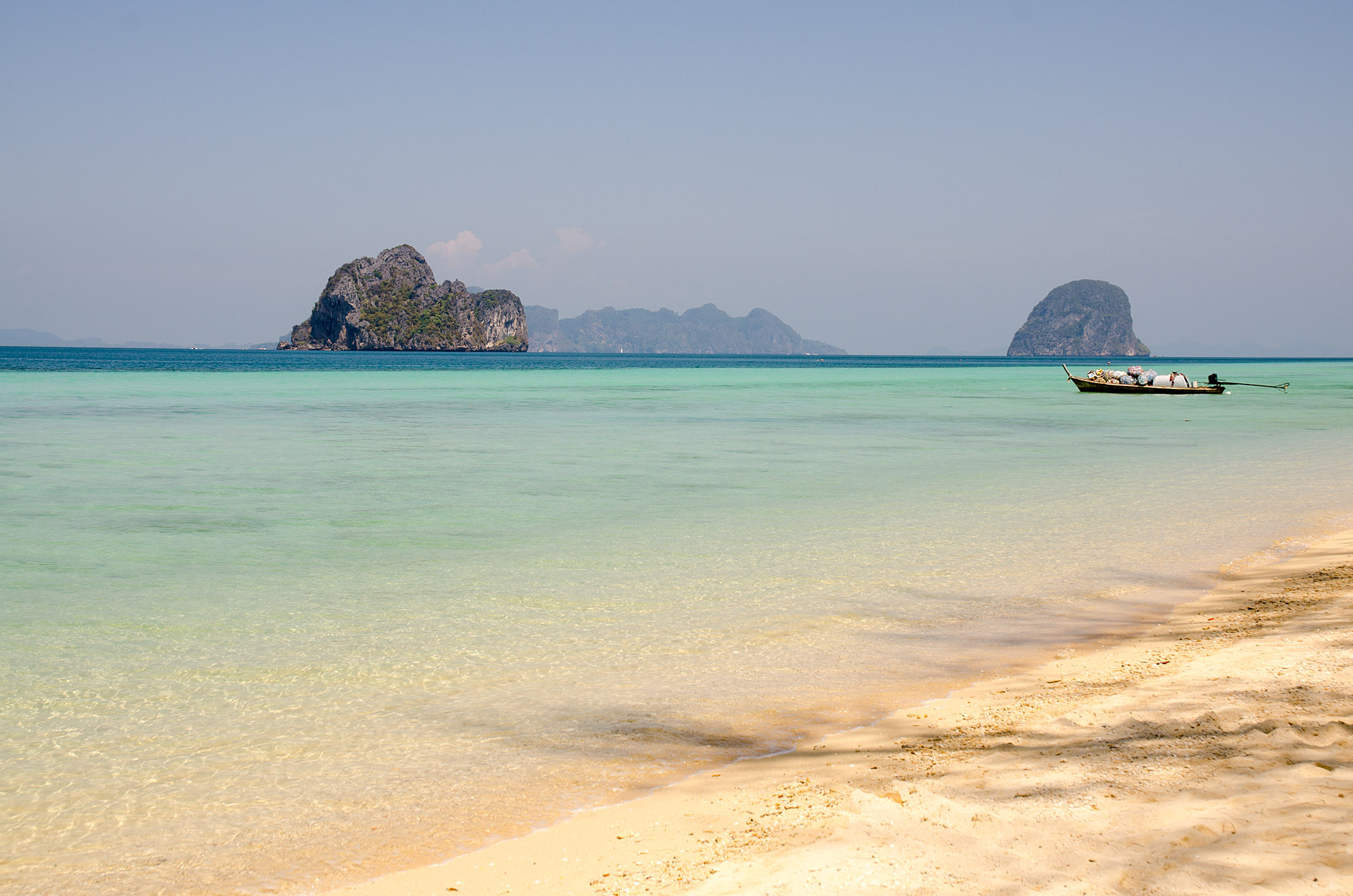 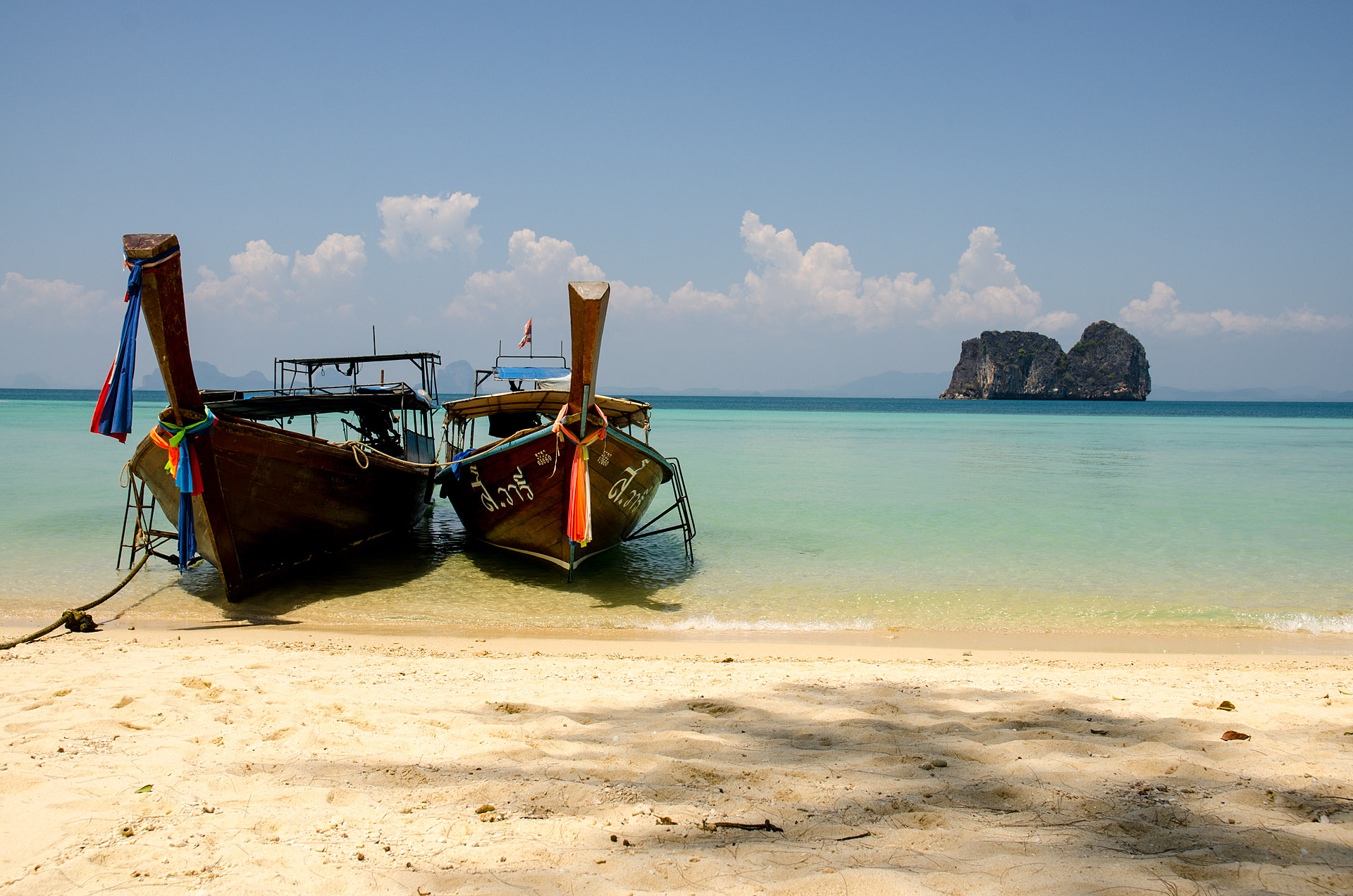 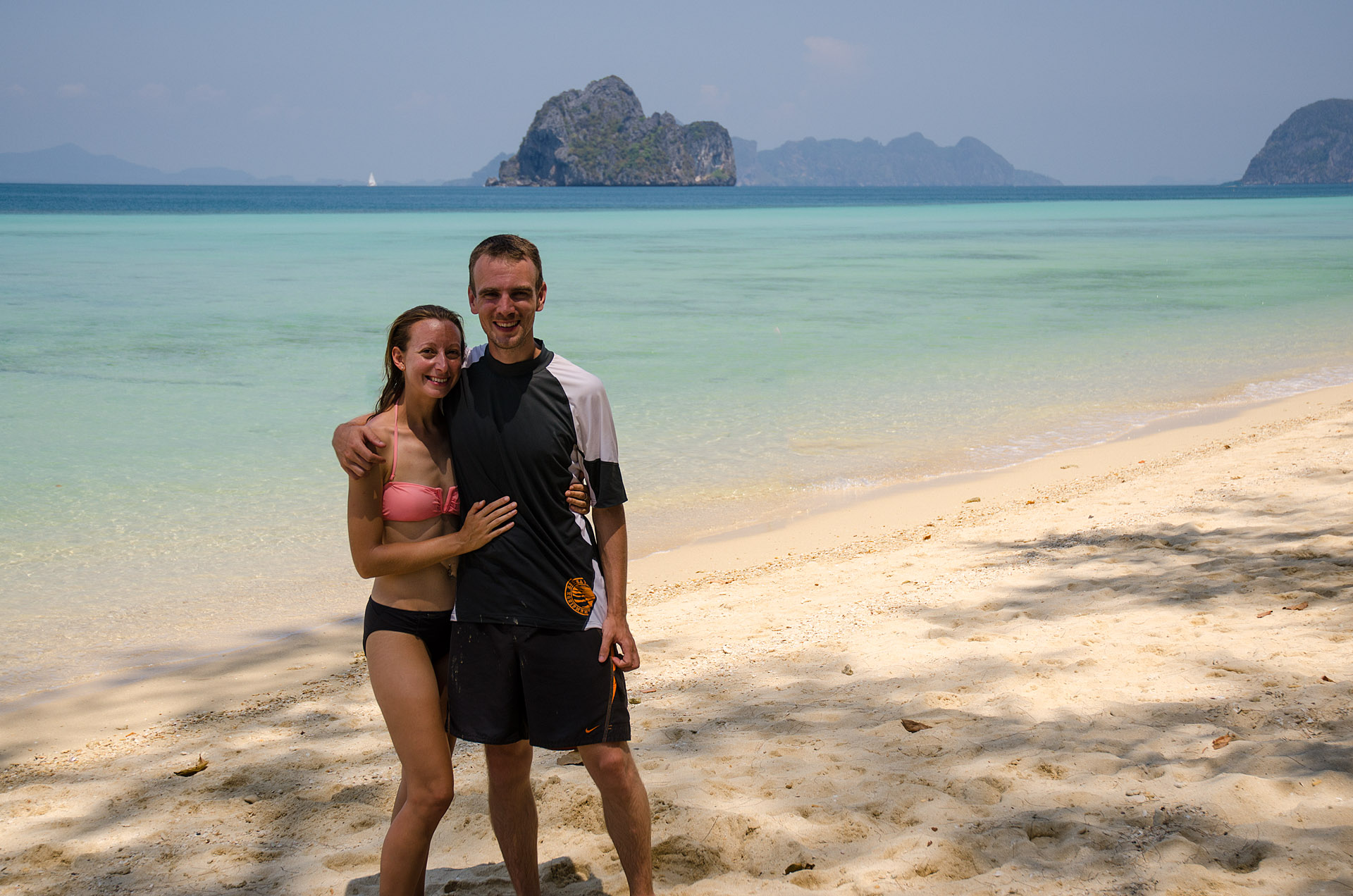 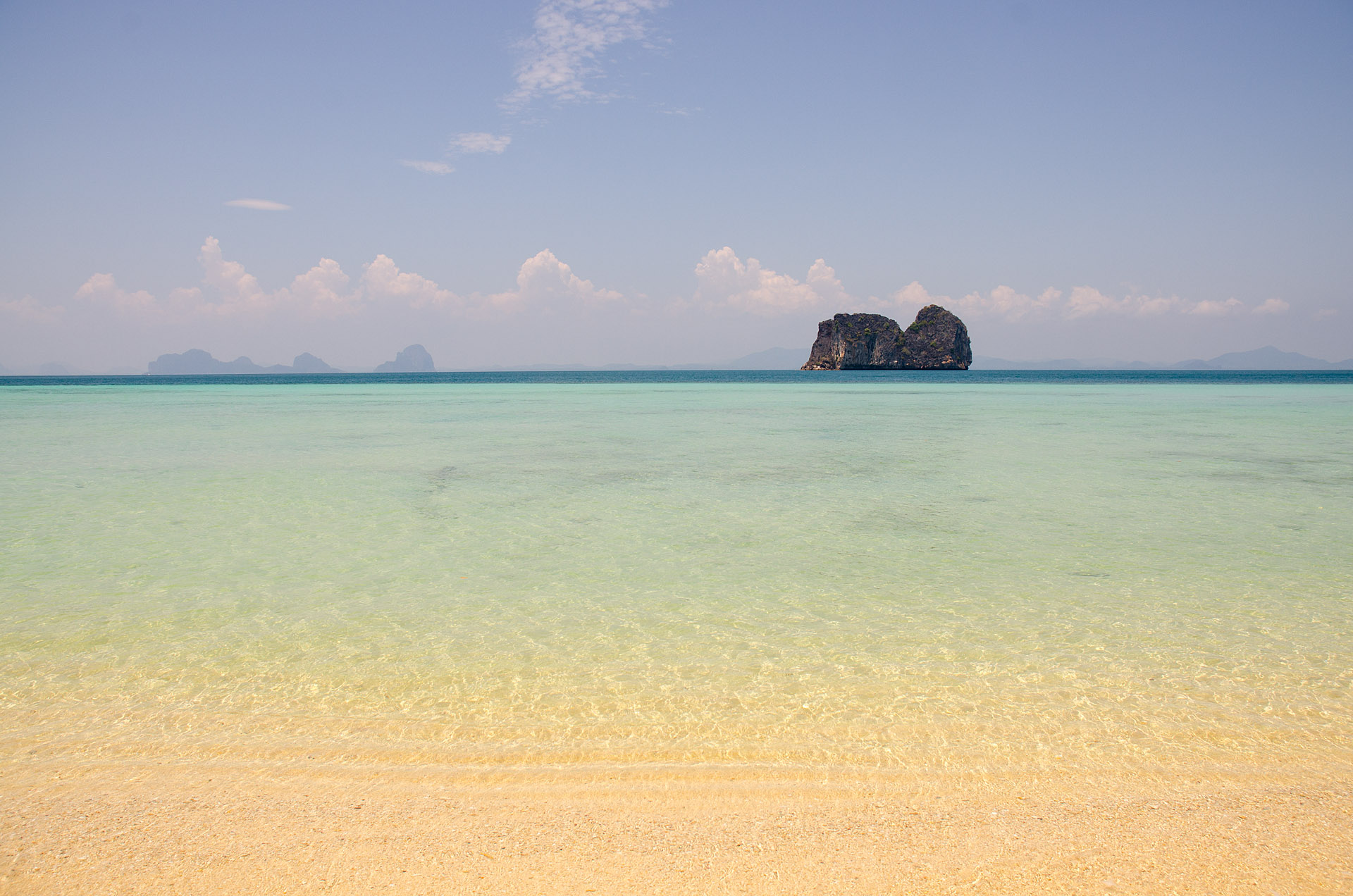 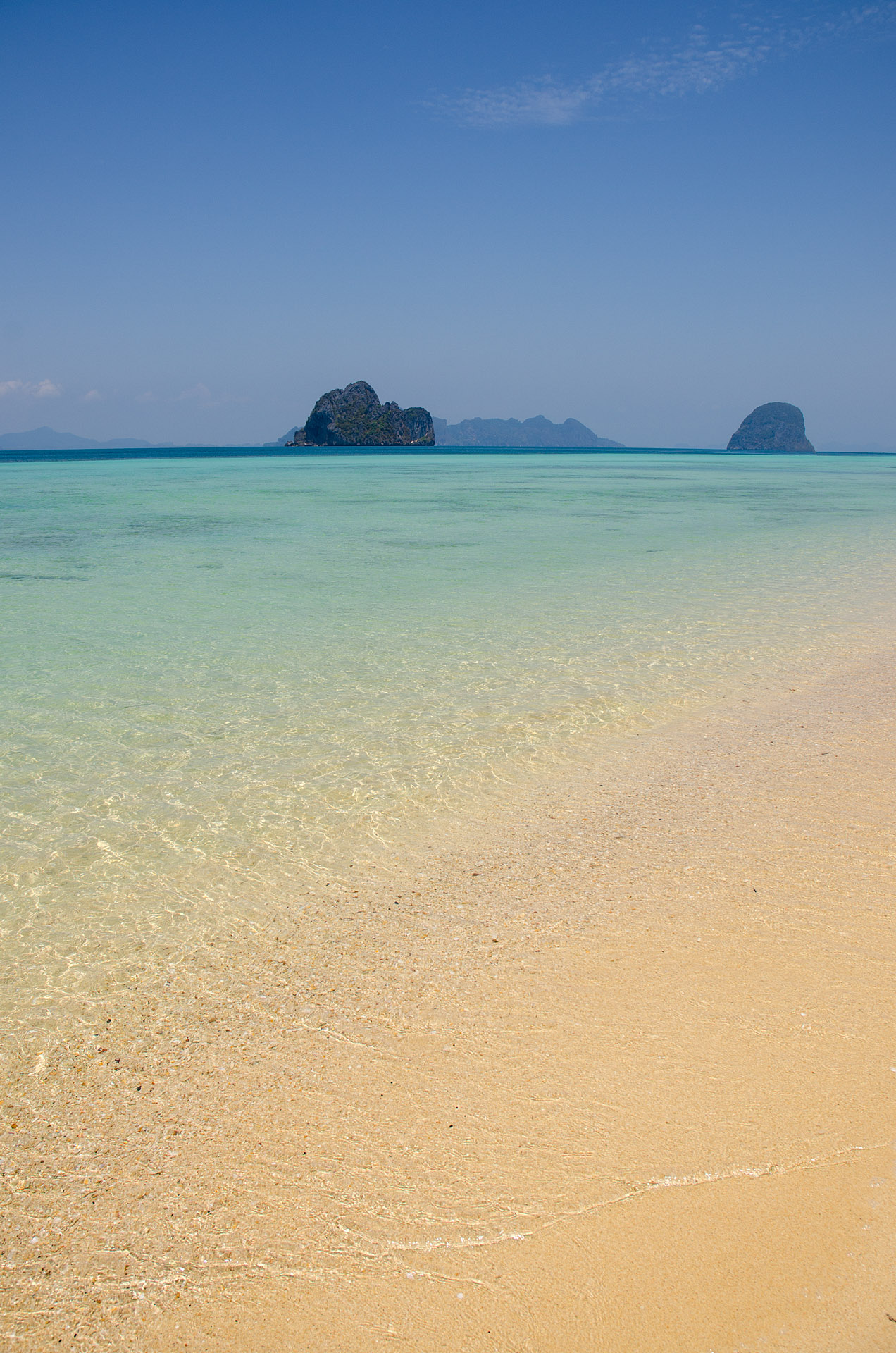 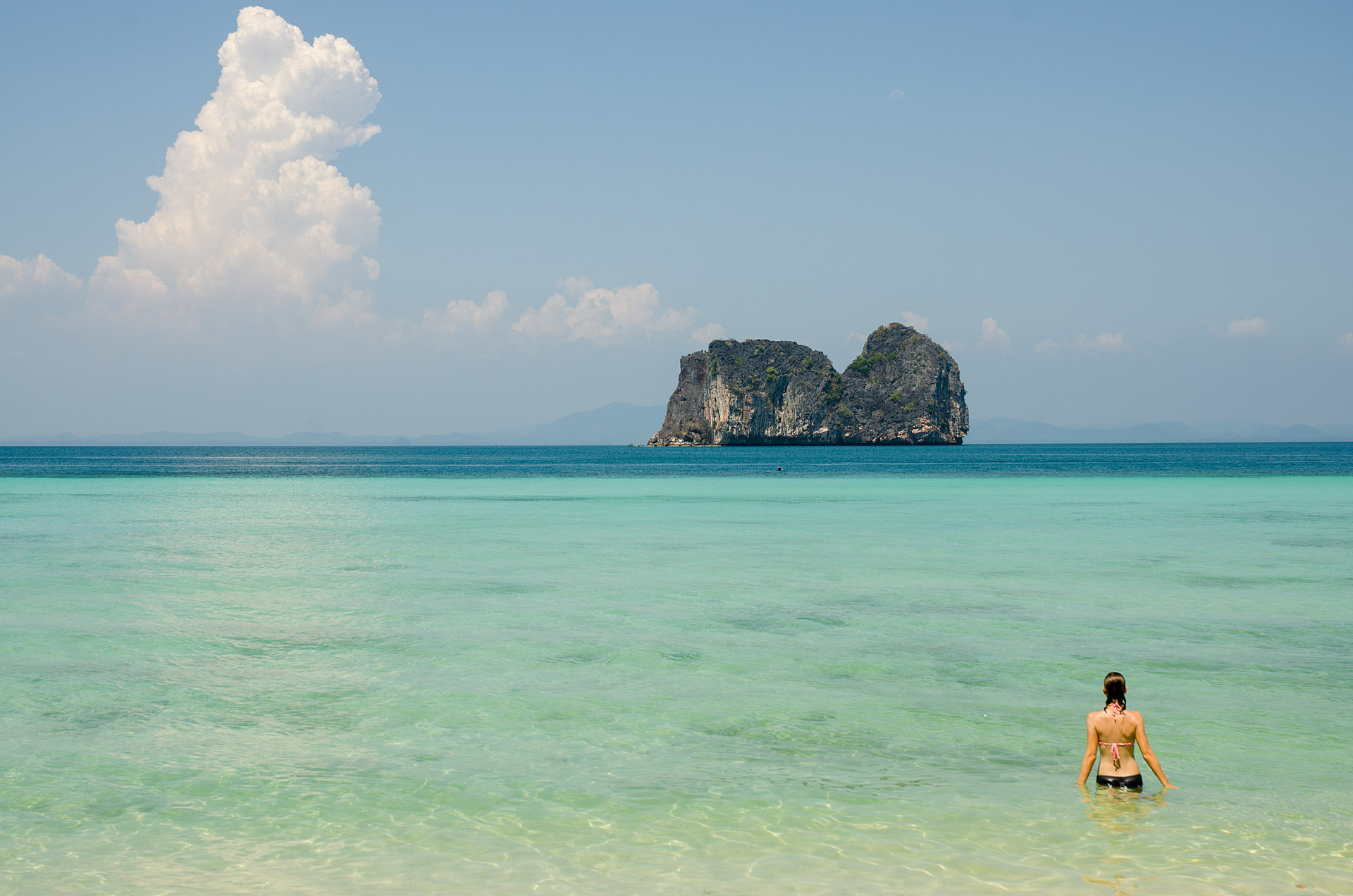