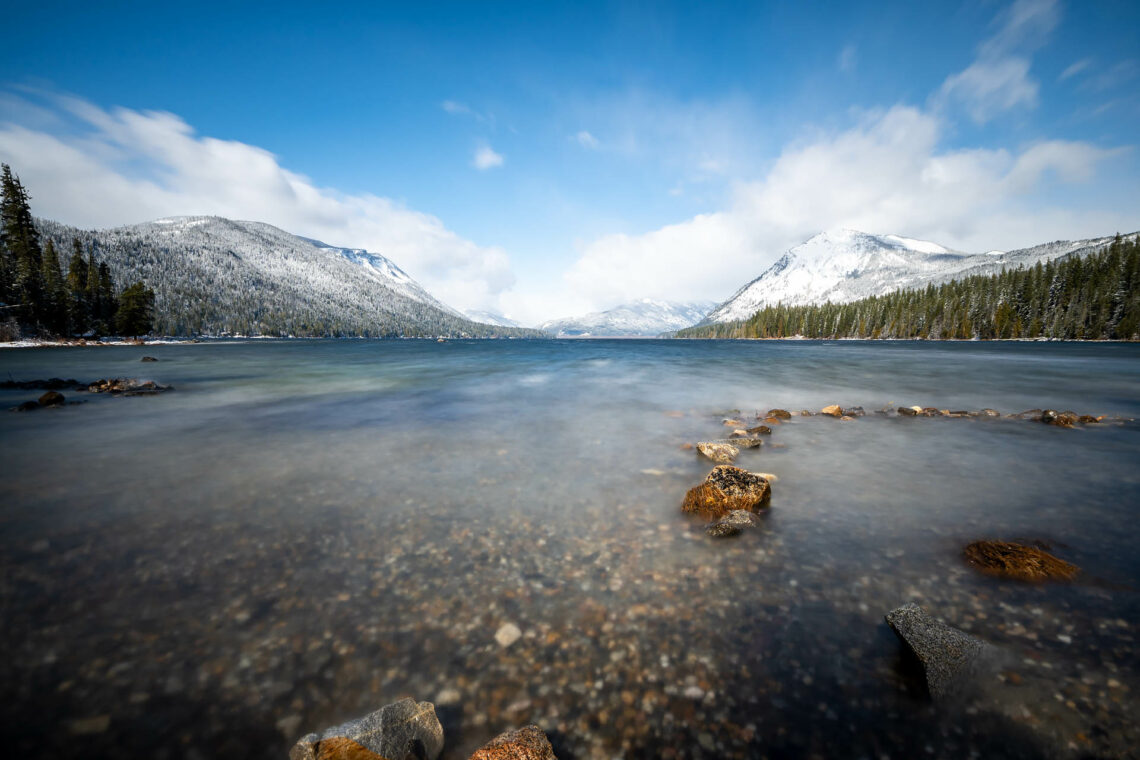 Hey everyone! It’s Sanchez. I’m hijacking this post from my mom. Don’t get me wrong – she’s okay at this writing thing, but Lake Wenatchee was my absolute favorite place in Leavenworth. I want to make sure it gets the praise it deserves. For all you outdoor-loving pups out there, read on so you can share this one with your humans.

A couple days after we moved to Leavenworth, my mom discovered that Lake Wenatchee State Park was just ten minutes up the road from our little cabin. The park’s about half an hour from downtown, but we were staying pretty well out in the sticks up along the winding Chumstick Highway. It was the end of March when we arrived in Leavenworth, so we were desperate to find a cool place to get outside with a record-setting amount of snow in the mountains. After coming across the North Lake Loop Trail at the North Campground, my mom thought we should give that a shot. 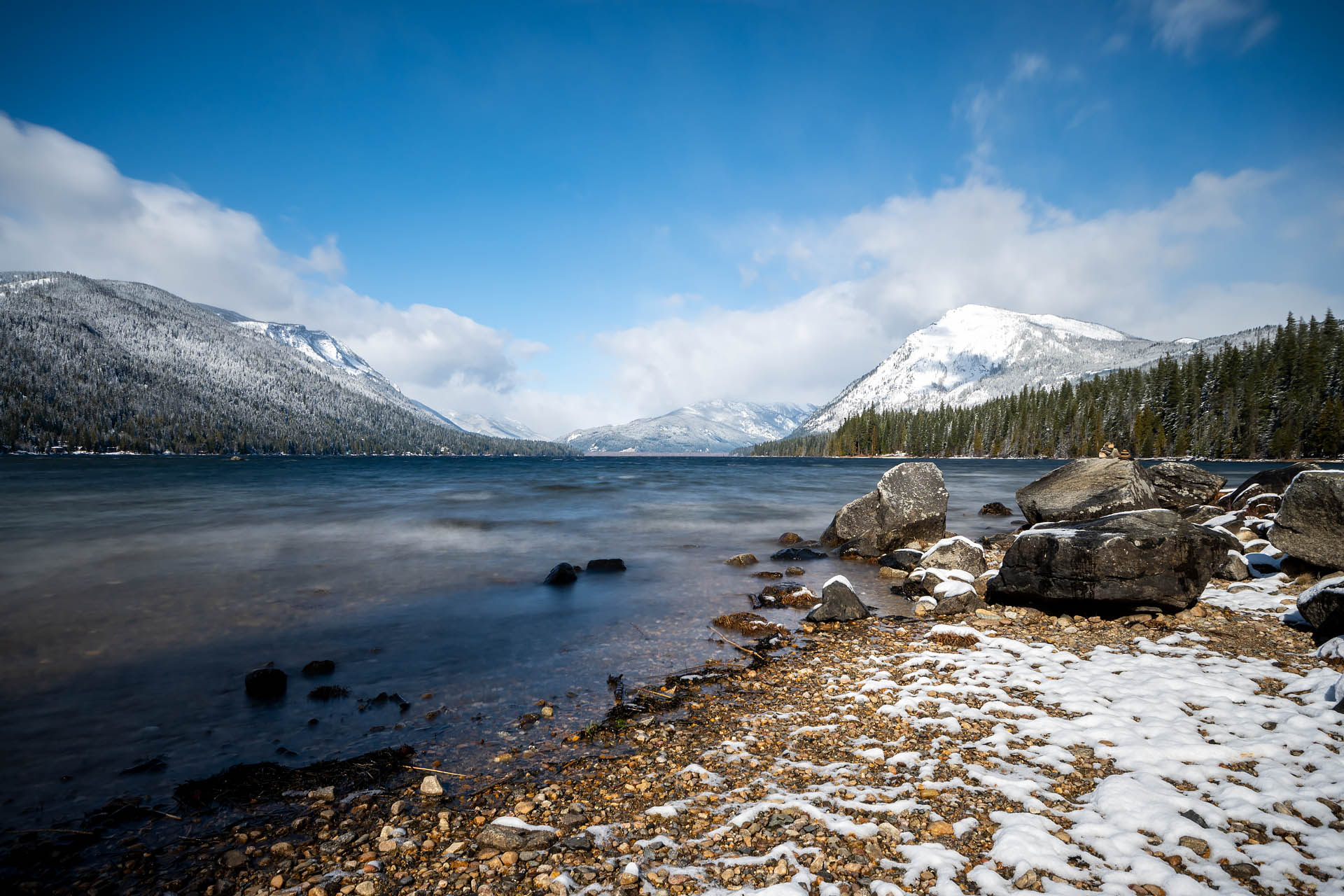 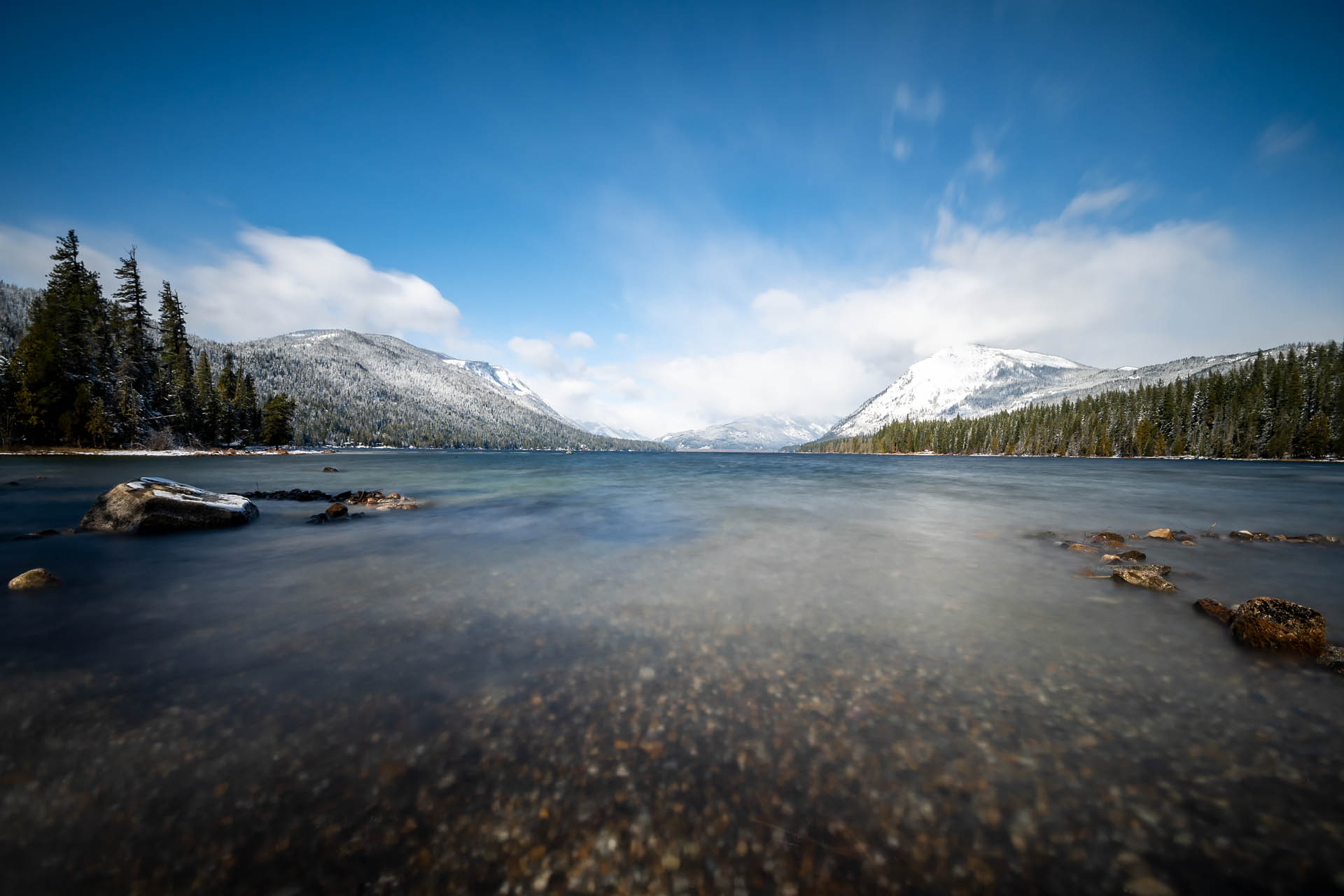 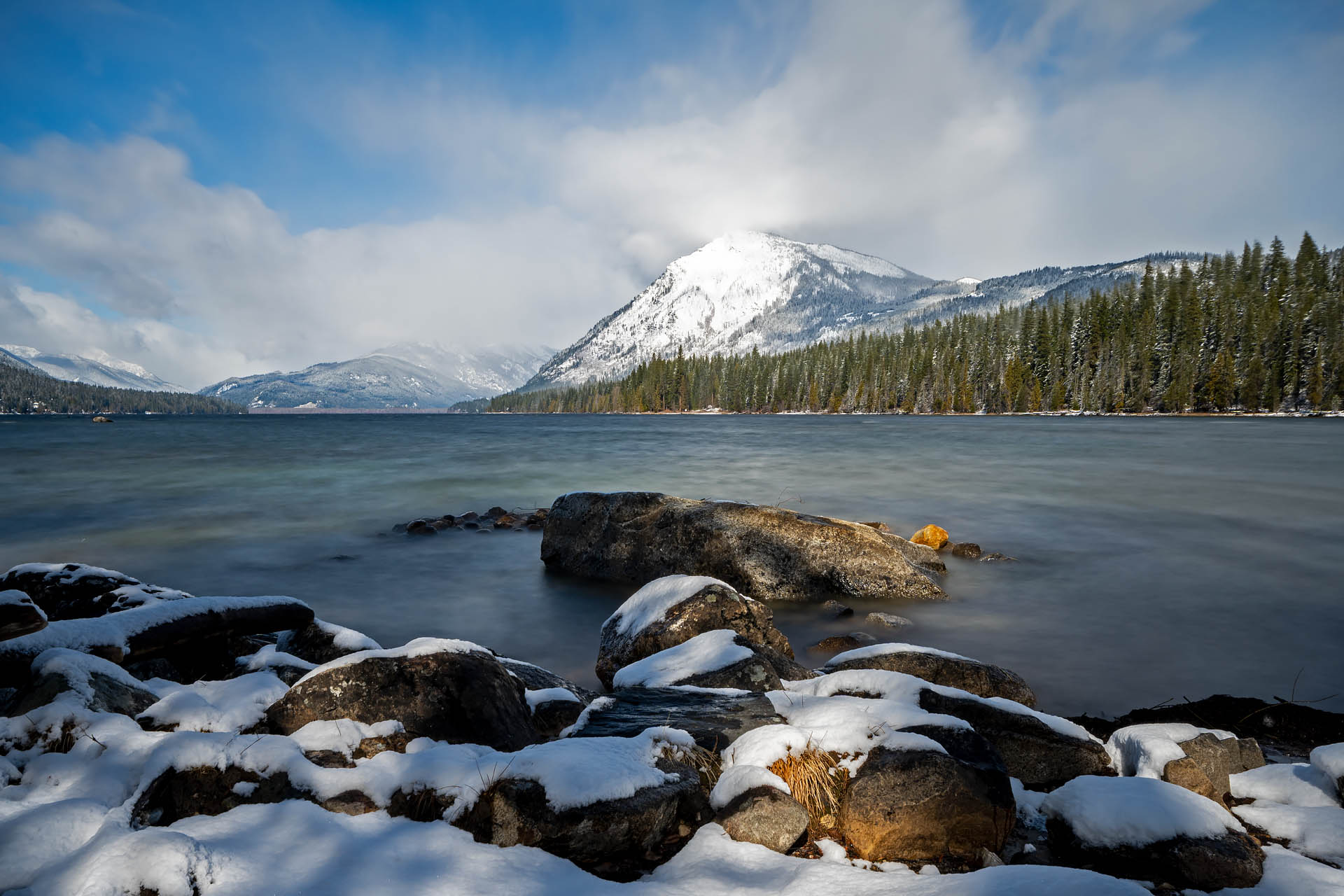 It was pretty snowy the first time we visited, but the trail was awesome. It was pretty short – about two and half miles – but there was nobody there in the off-season. The trail followed the headwaters of the Wenatchee River to this secluded little beach near Emerald Island. It was gorgeous. My parents kept trying to take my picture in front of Dirtyface and the other mountain peaks that surrounded the lake, but I just wanted to chase rocks in the water. I hate that stupid camera and, as usual, was not subtle about my annoyance. 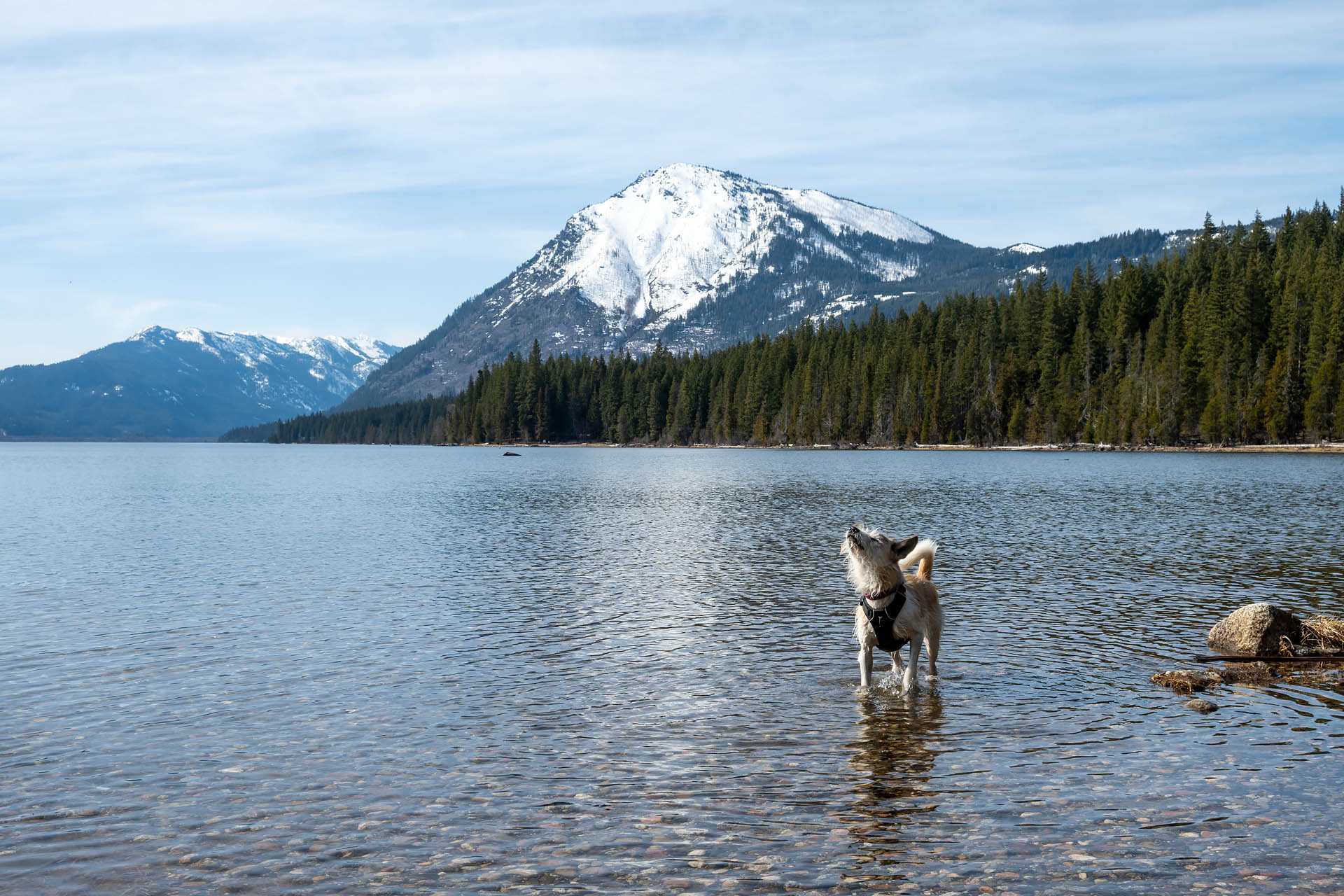 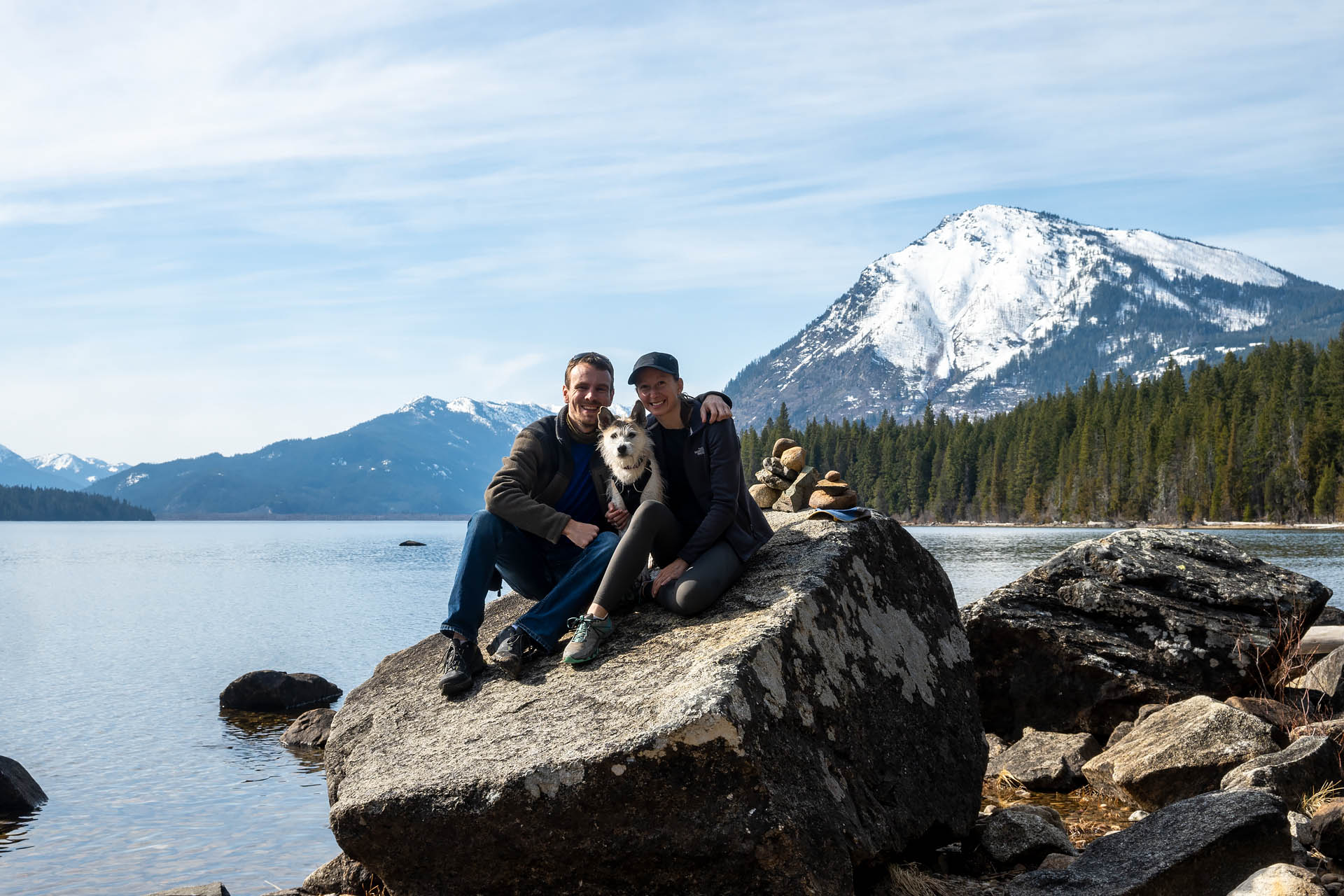 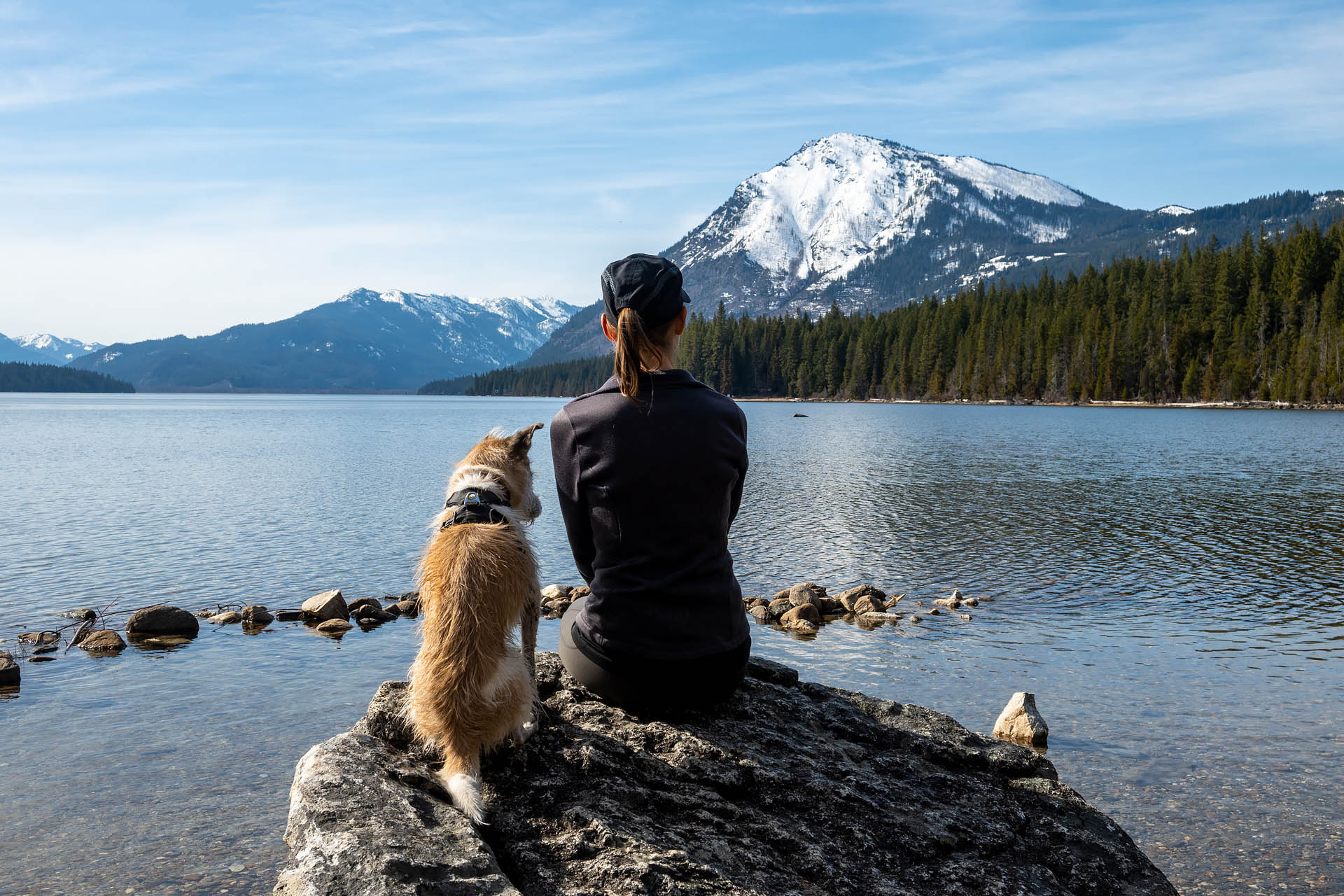 If you enjoy the thrill of a good rock chase game like I do, this beach is perfect! Before the snow started melting and significantly raising the lake level, the water was less than a foot deep a good twenty feet out from the shore. I’m not in love with swimming but I love splashing around in the shallows, so this was amazing! There were also tons of enormous fallen trees along the beach that have long dried out and are now perfect to run and jump on. It was like having my own private outdoor agility course! 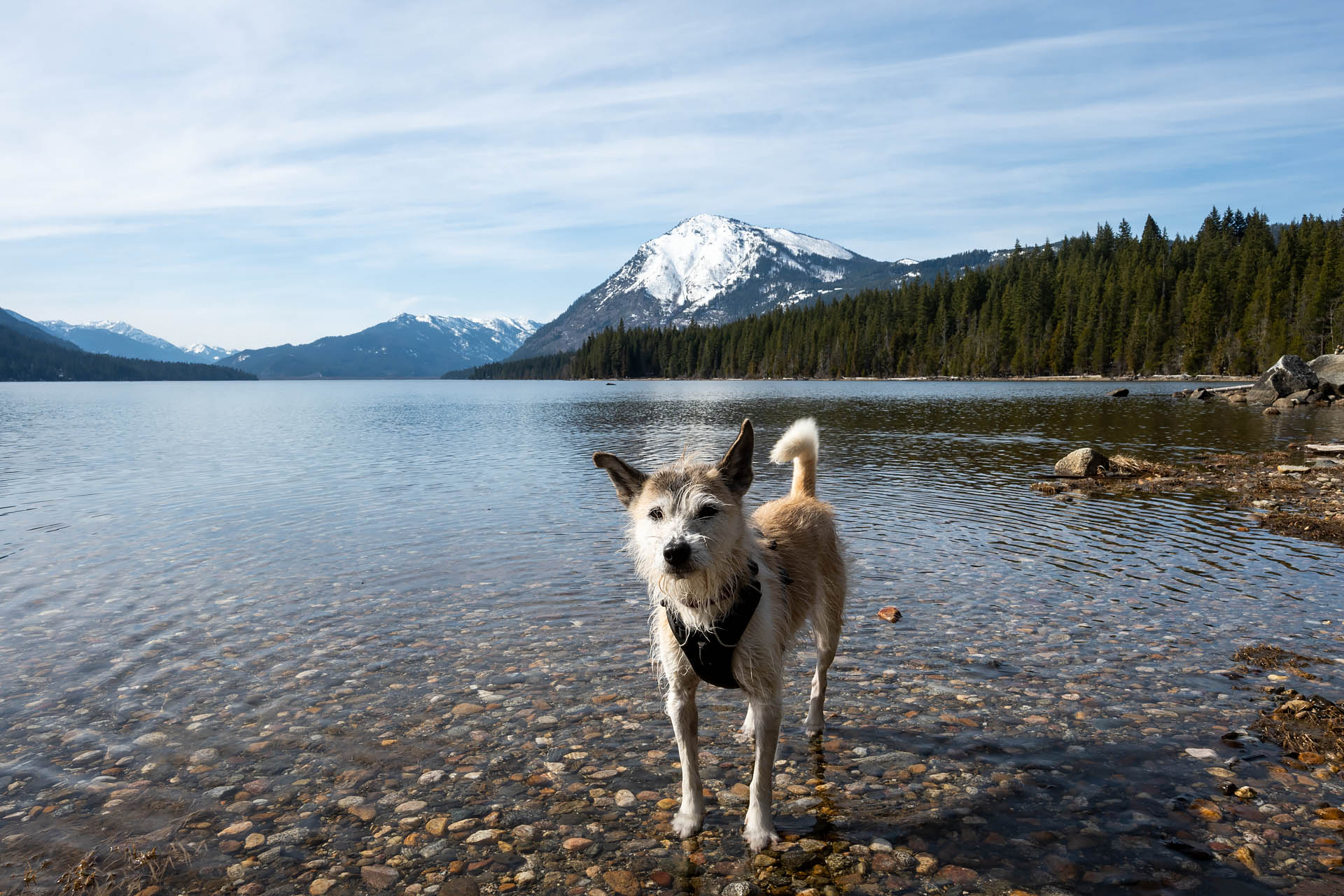 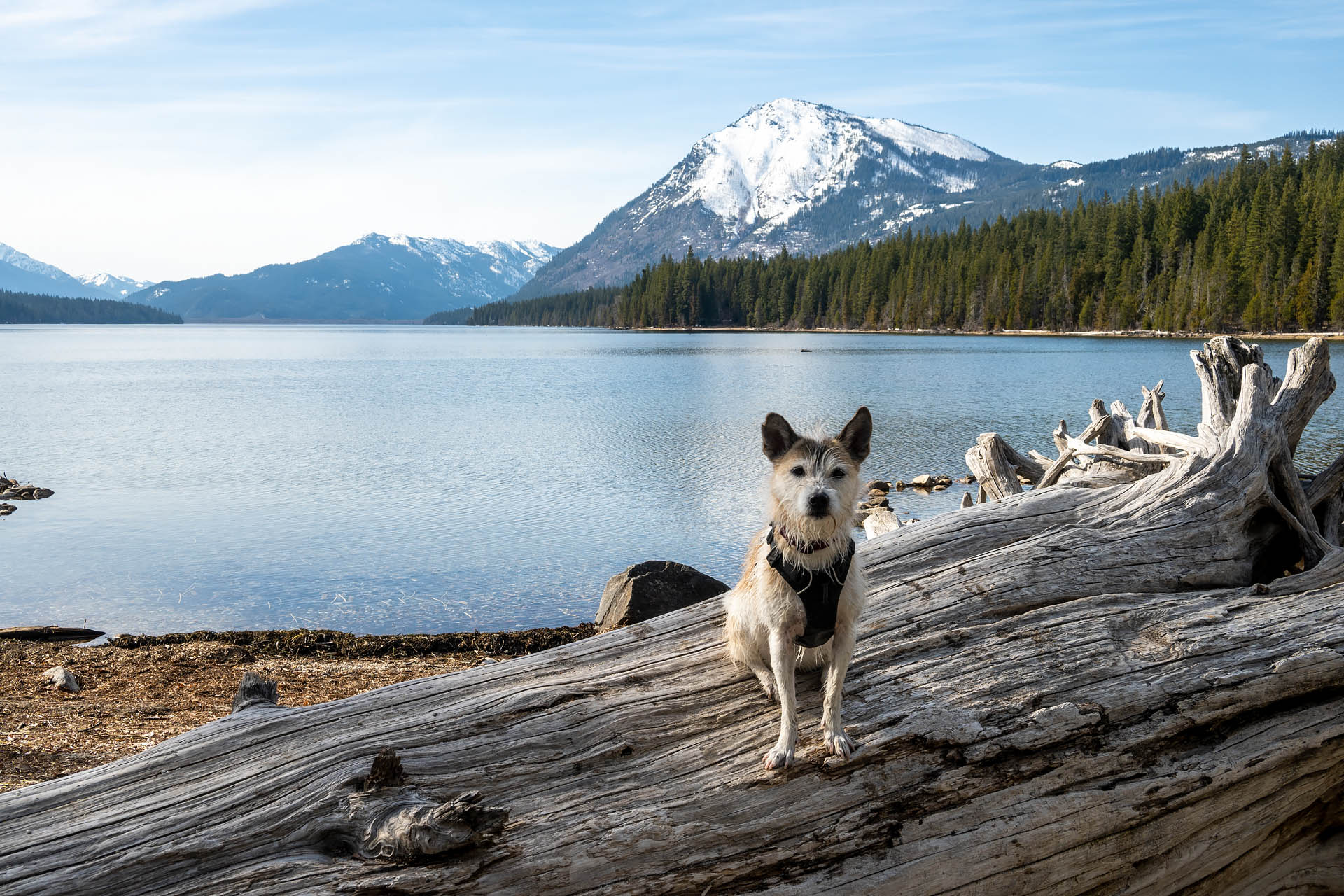 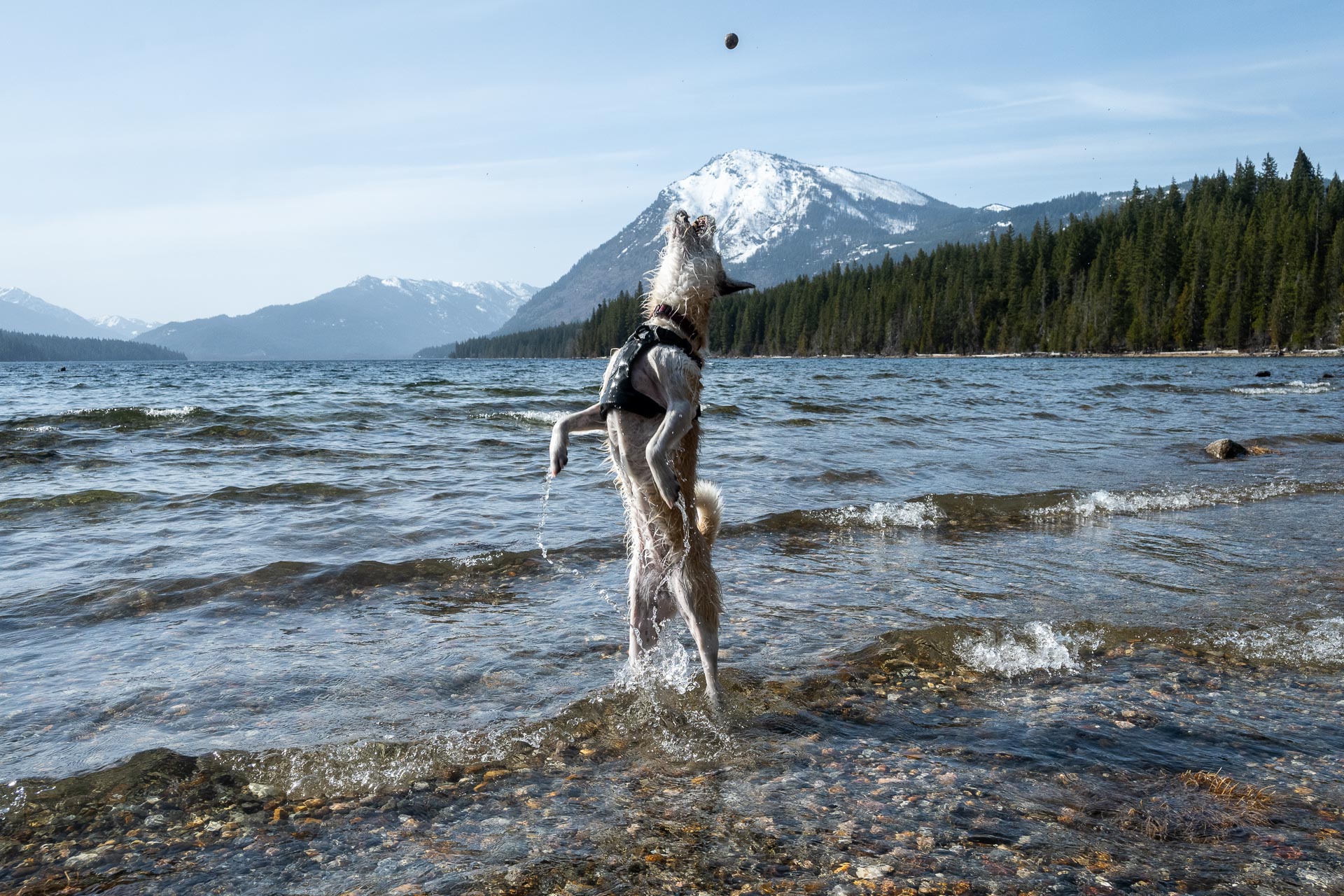 Two or three times a week we’d go to the lake, walk the first half of the loop, and stop at my beach. After an hour or so of rock chasing, we’d close out the loop through the deserted summer campground and hunt for chipmunks in the bushes. From March until mid-May, I had the whole place virtually to myself – it was every outdoorsy dog’s dream! I could have stayed for hours chasing rocks, but my mom and dad insisted we leave when I started shaking from the cold and picking up my freezing feet. Sure, it’s glacier-fed and not particularly warm water, but I’m Thai tough… I can take it. 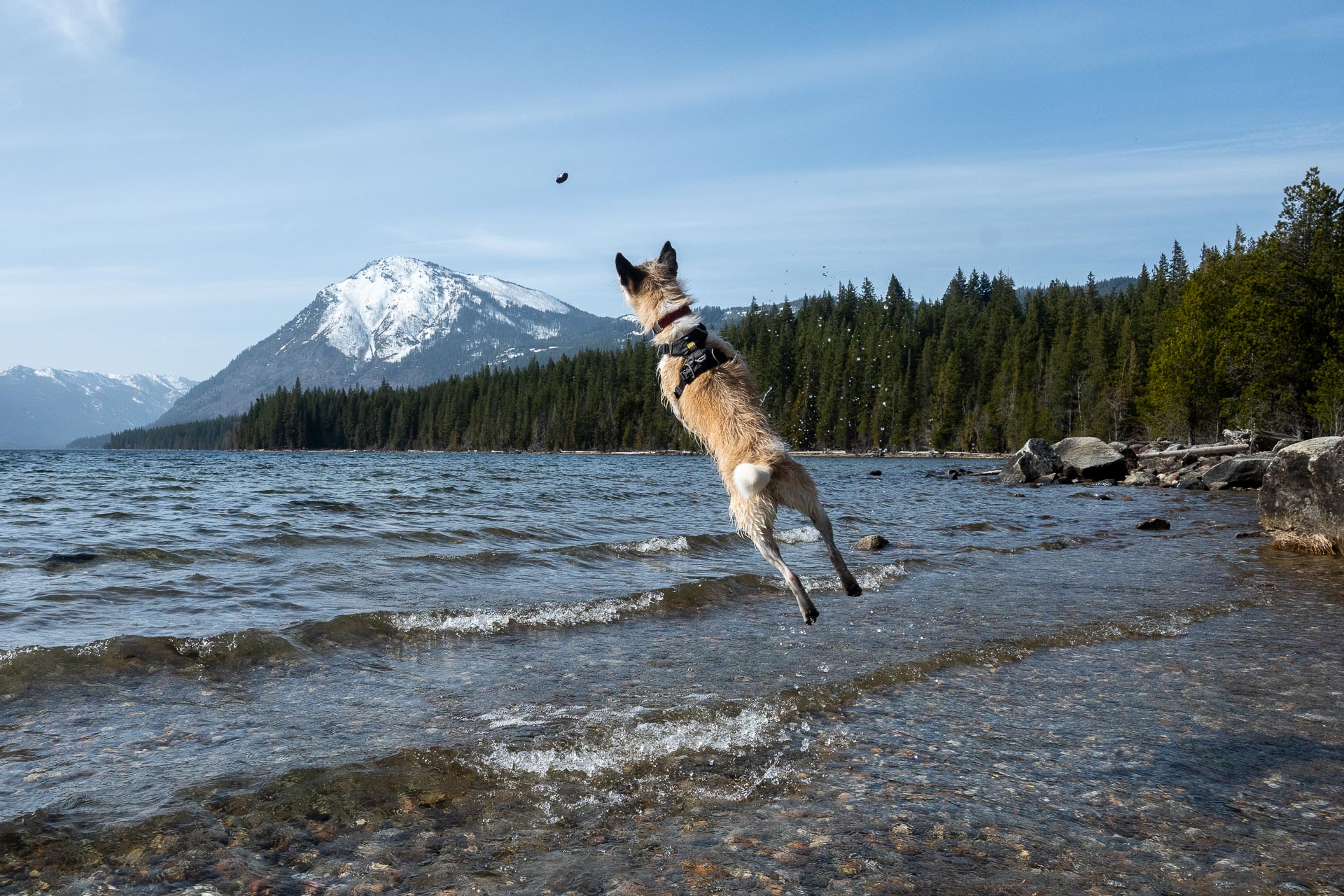 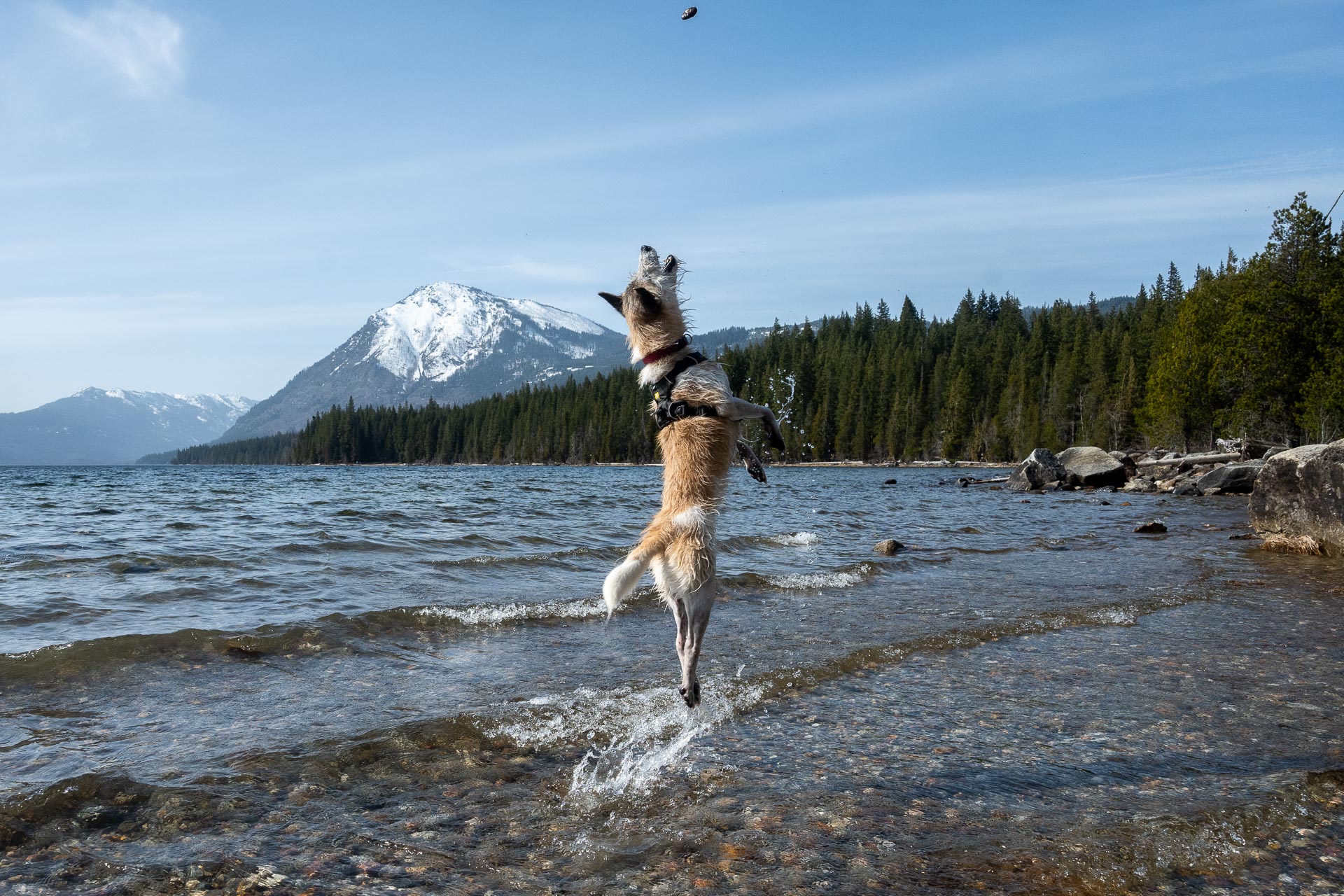 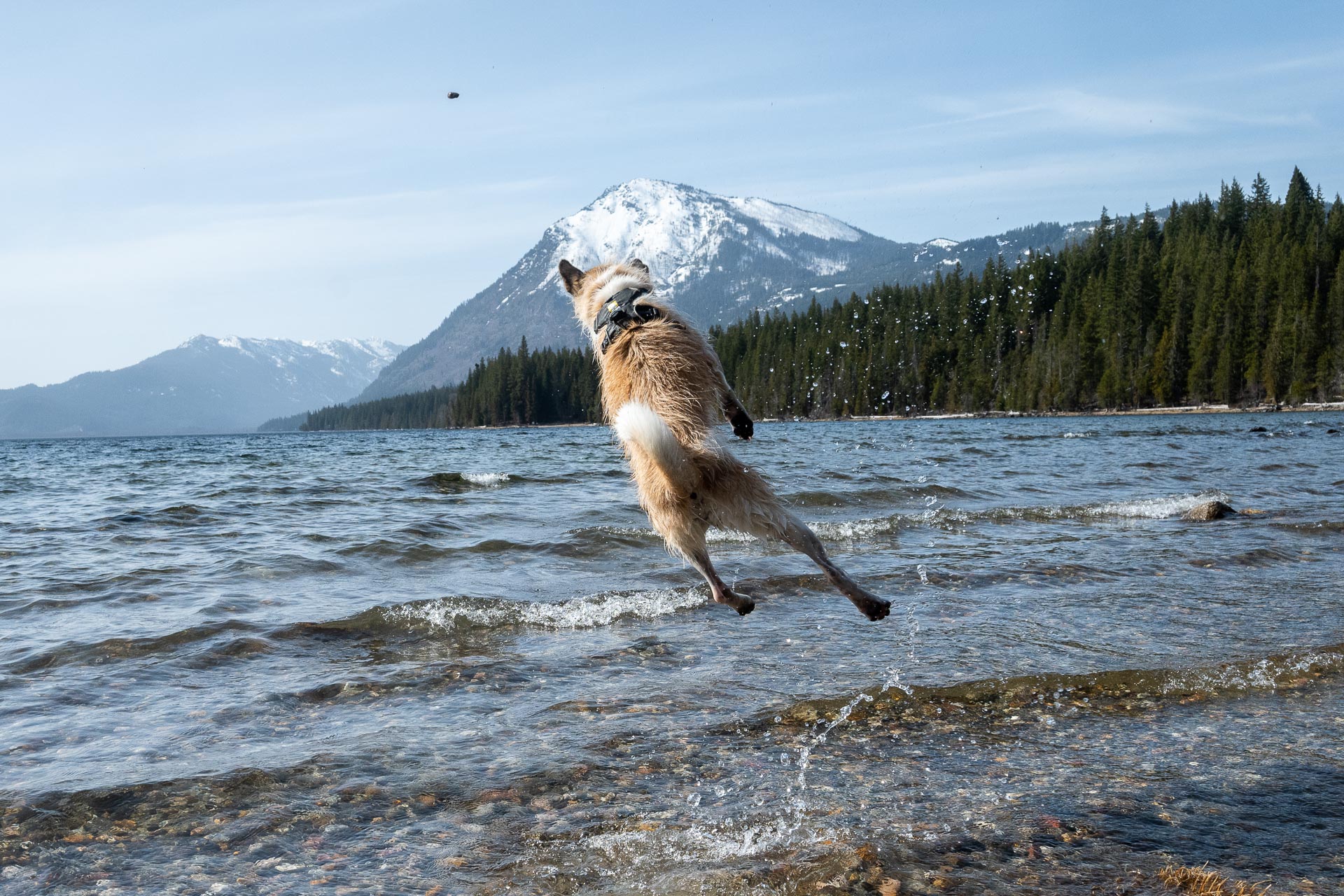 After doing the North Lake Loop Trail a dozen or more times, my mom suggested maybe we should check out another area of the park. I was totally fine visiting my favorite beach over and over again forever, but I decided to humor her. After all, it’s kind of hard to argue when you can’t reach the gas pedal or see over the steering wheel to drive yourself to the lake.

Hidden Lake is a secluded little lake over on the southwest shore of Lake Wenatchee near the Glacier View Campground – the opposite side of the lake from my special beach near Emerald Island. If you follow Cedar Brae Road along Wenatchee’s southern shore, it’s about five miles of amazing sniffs from Hwy 207 to the trailhead. It’s a little bumpy toward the end of the road, but that just meant my dad had to slow down so I could sniff even more.

AllTrails lists the hike as a two-mile out-and-back via the new Hidden Lake Trail, but it’s possible to make a loop. We went up to the lake via the new trail, then followed the old trail from the lake back to Glaicer View Campground and hiked about a mile along the dirt road back to the trailhead. Our final distance was just under three miles, but when we recorded it the road was snowed out a little ways from the trailhead. Consequently, our track was probably a little longer than normal.

Like the North Lake Loop, this trail is also a short, easy hike, but it was pretty nice. The forest is beautiful with towering trees and tons of logs to jump up on if you’re keen to practice your agility skills. Hidden Lake was also super cool. As soon as I saw the shoreline, I raced ahead on my long leash so I could be the first to see it. The only bummer was that it was a little too deep for my rock chase game. I think the back half of the trail was my favorite part. As it switchbacked down to the campground, no one was on that section of trail. I suppose most people are hiking as an out-and-back. However, if you’re a shy dog like me who enjoys some solitude, the loop’s the way to go here. 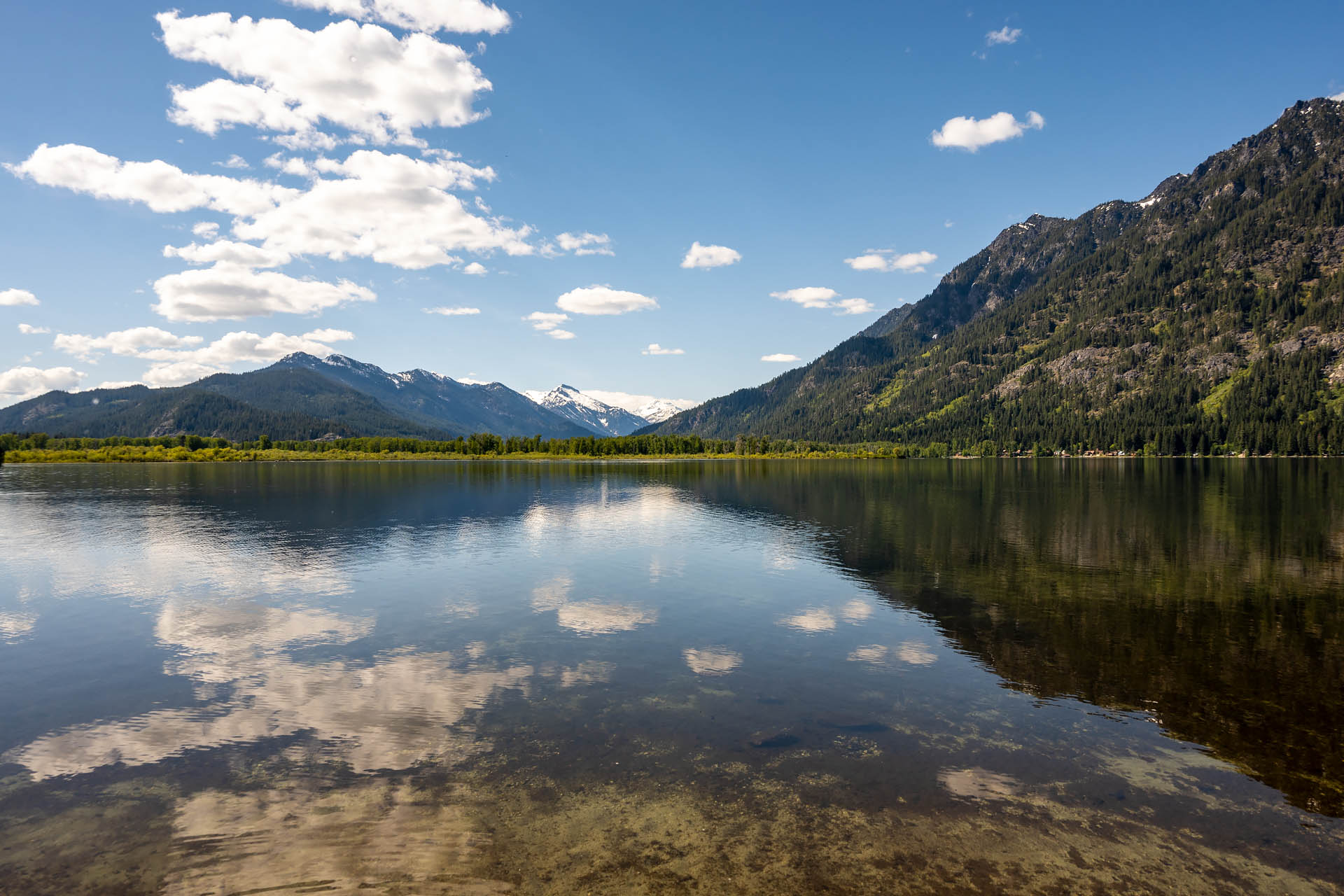 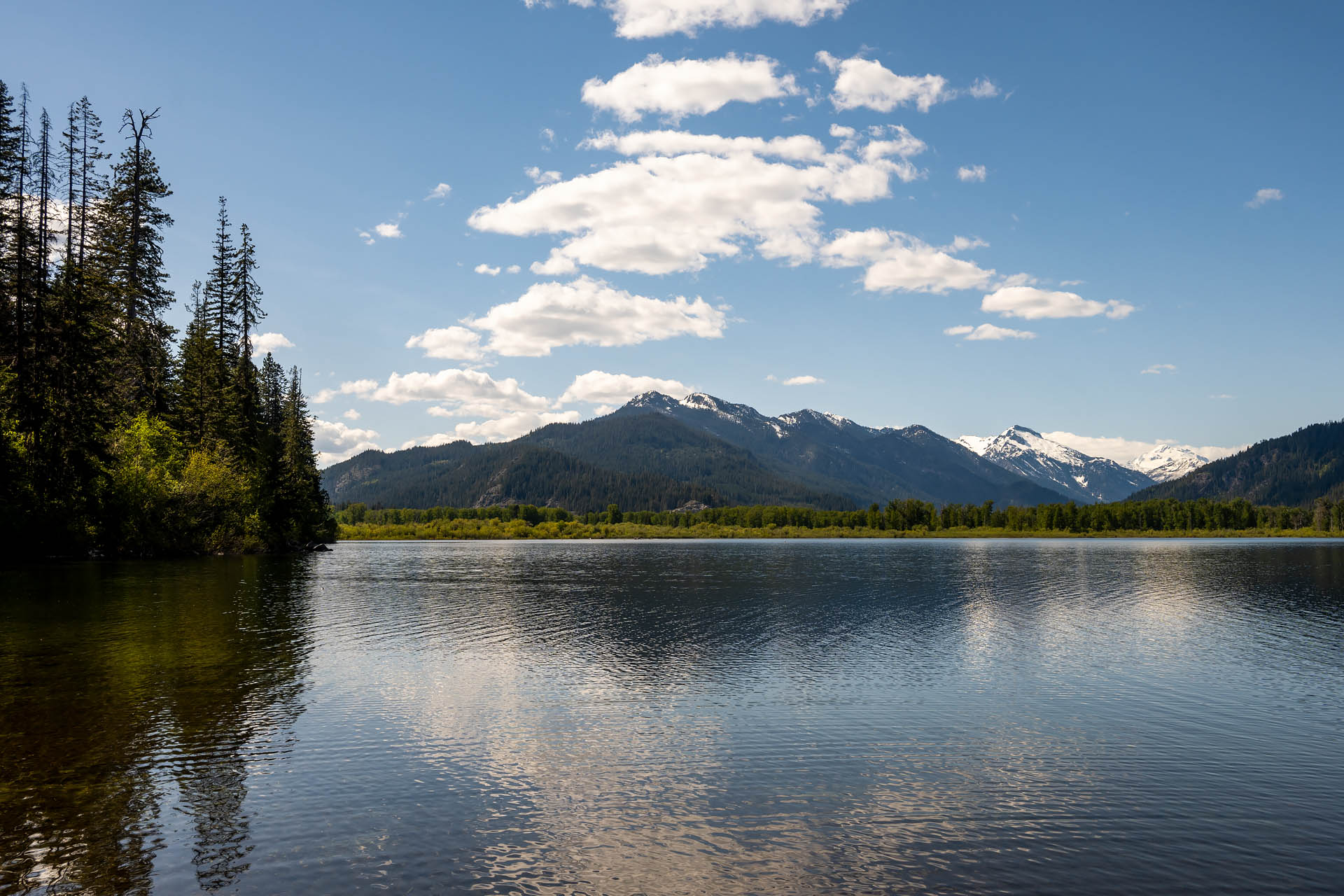 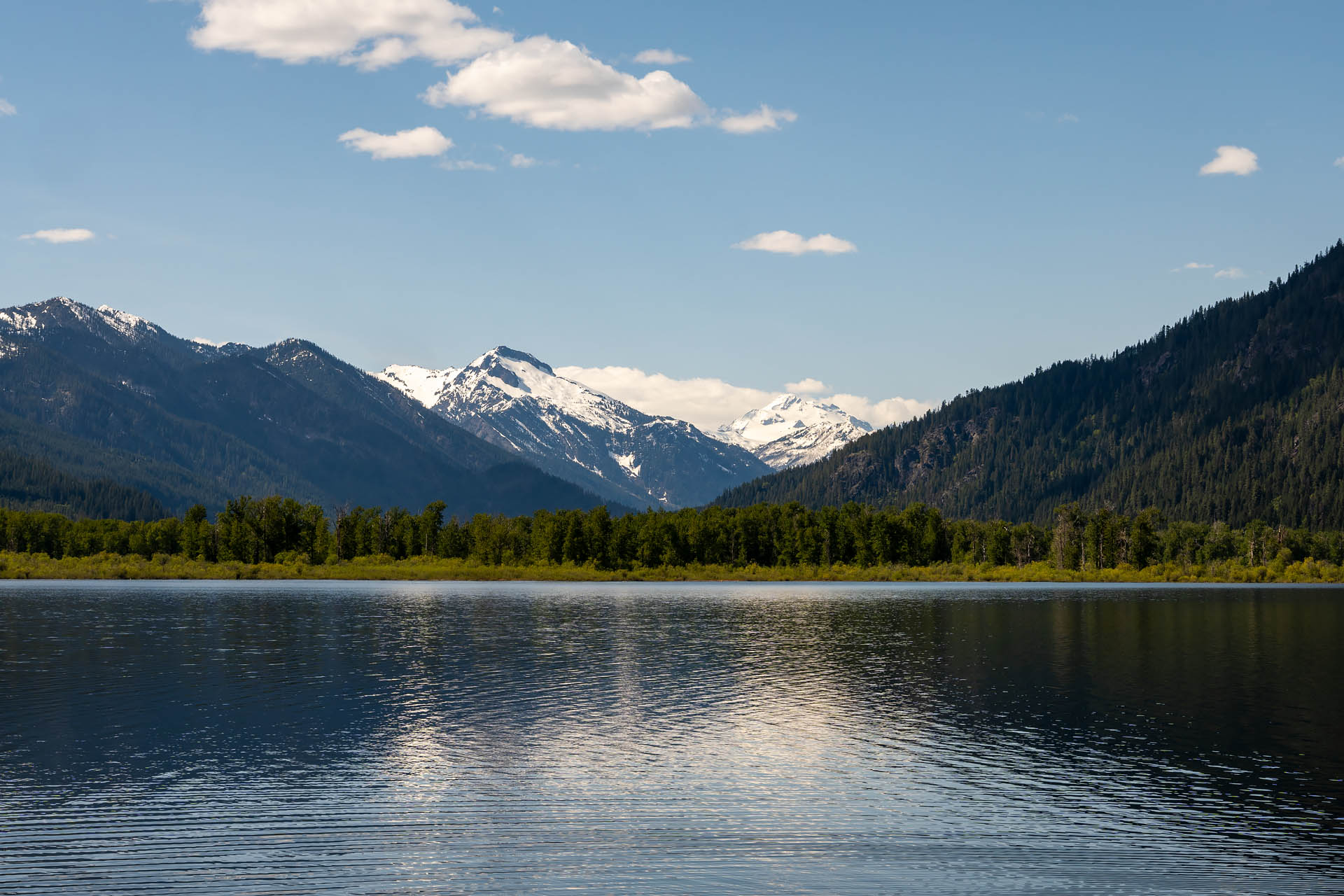 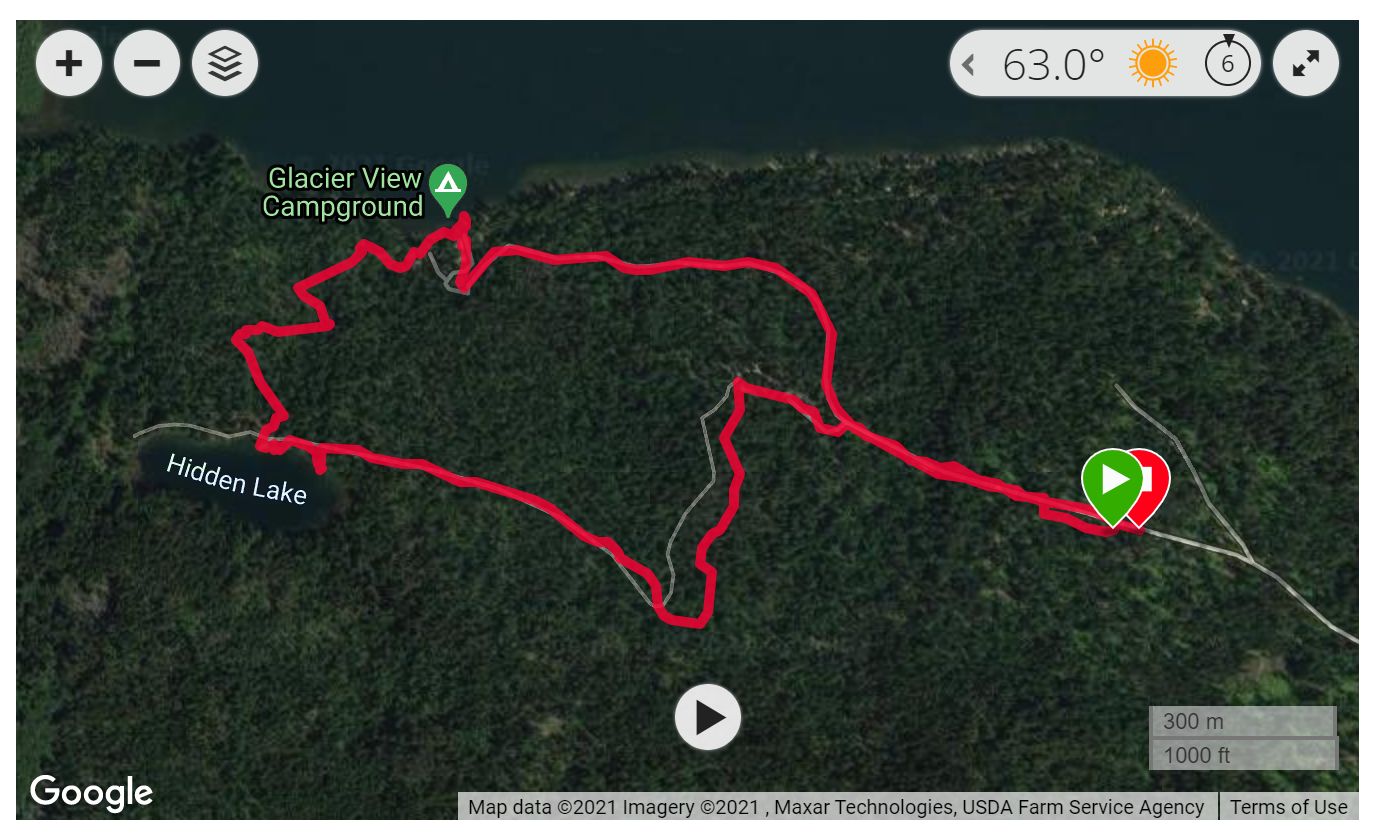 After enjoying the view from the small beach along the North Lake Loop, my mom and dad didn’t think there could be a prettier spot on the lake. However, when our Hidden Lake Loop dumped us out at Glacier View Campground, they were taken aback with the view. This meant that out came those ridiculous cameras, once more delaying my play time with their interminable panorama shooting.

Glacier View turned out to be just as deserted as the North Campground during the spring months, so we returned here a few more times to change up the scenery for my rock game. The beach here is a bit smaller, but the smells are just as good. 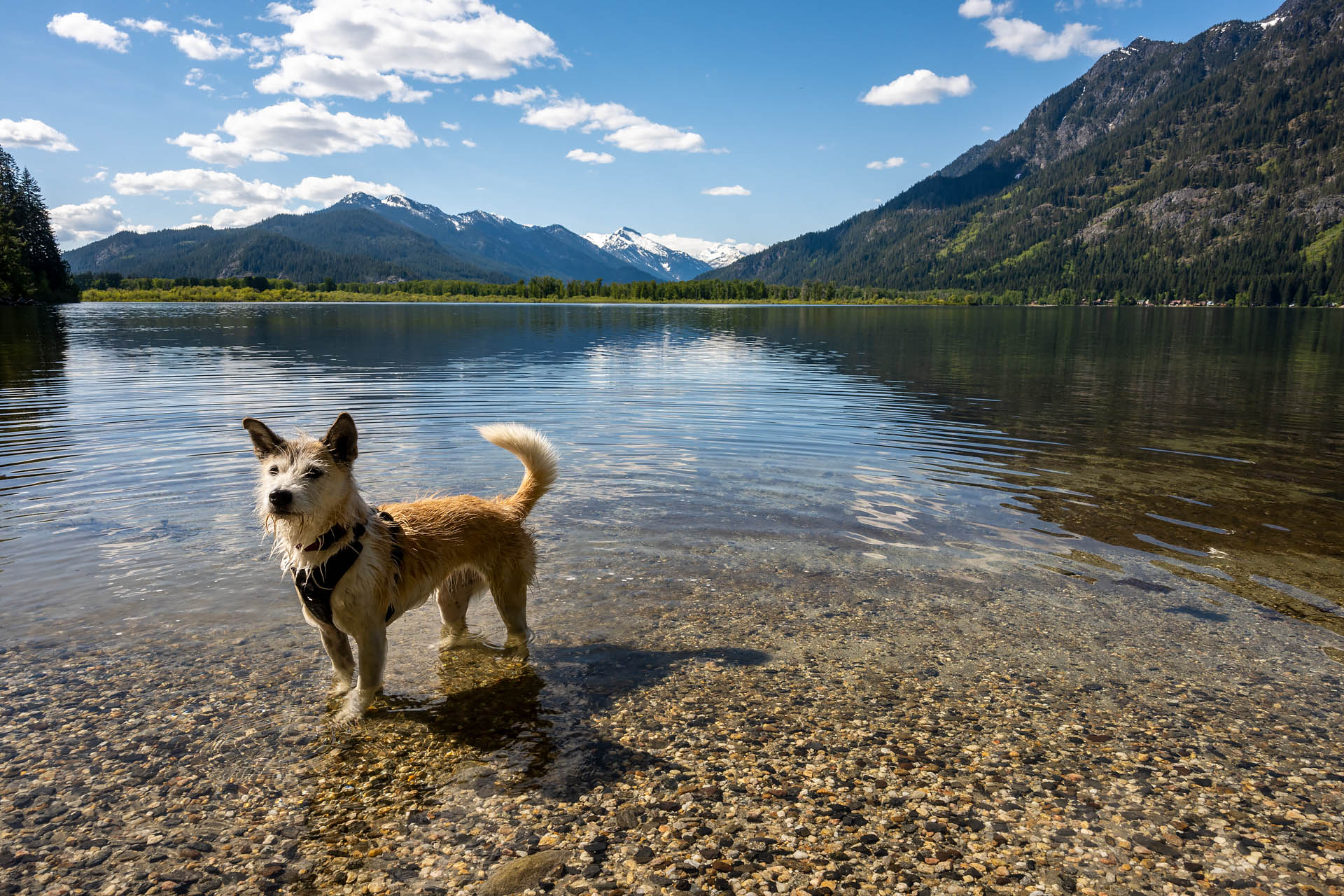 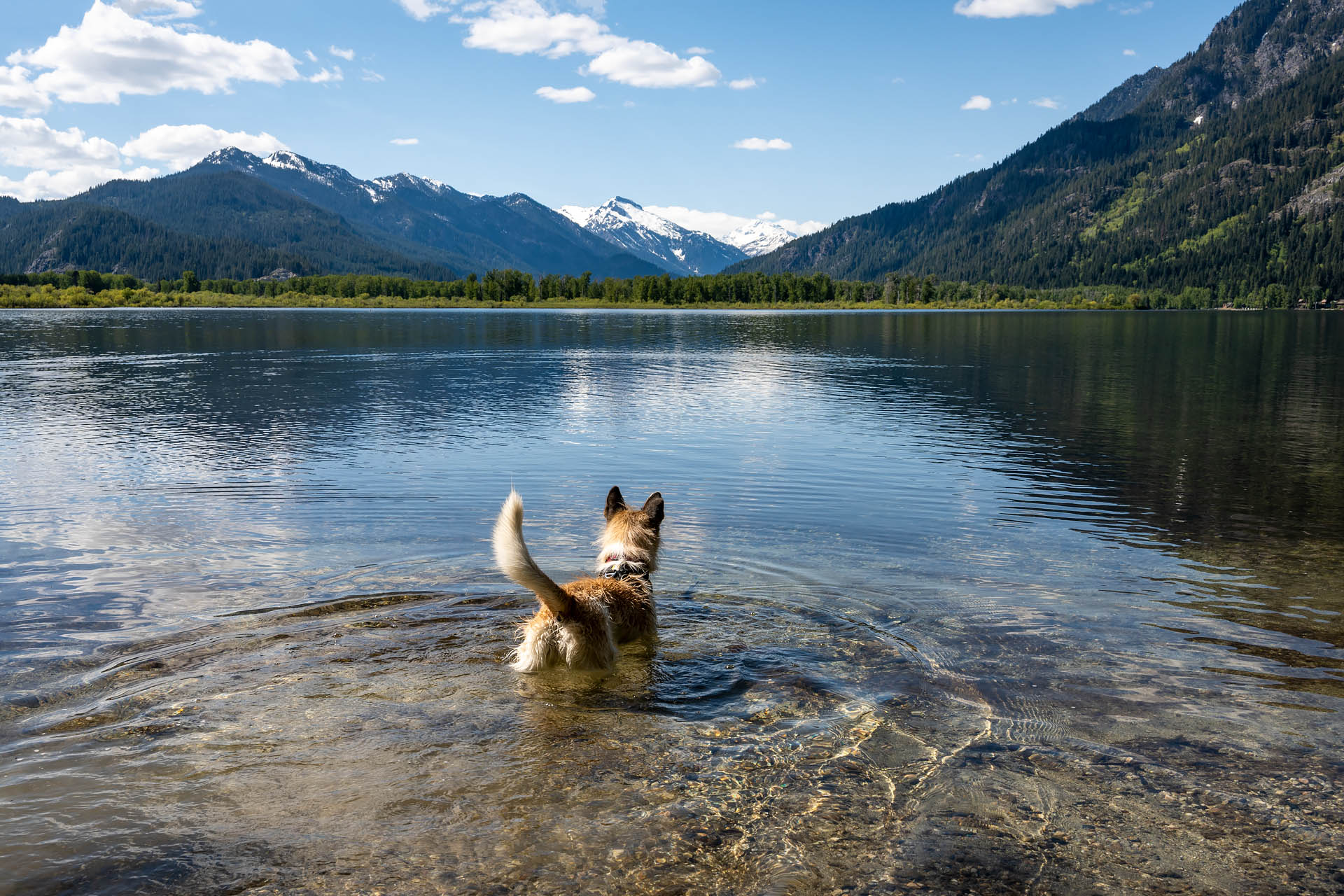 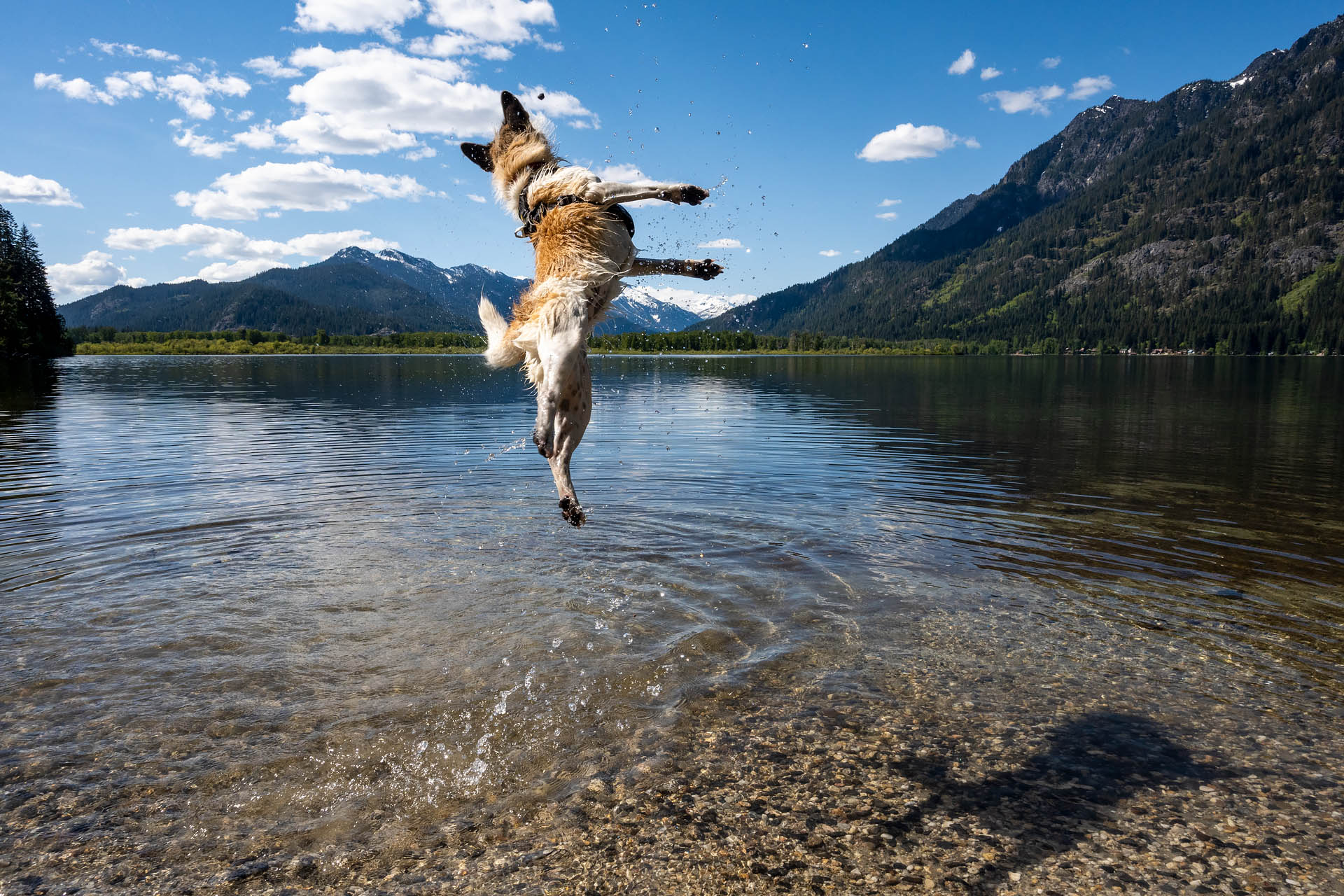 If I had to choose my favorite spot, however, it would probably be the north beach. I enjoyed the drive out this way better than the north shore (my dad had to drive slower, which meant more sniffing time), but nothing can beat my perfect little Emerald Island beach. If you’re looking for a quiet place to explore – especially in the low season – Lake Wenatchee is the most special place I found in Leavenworth.