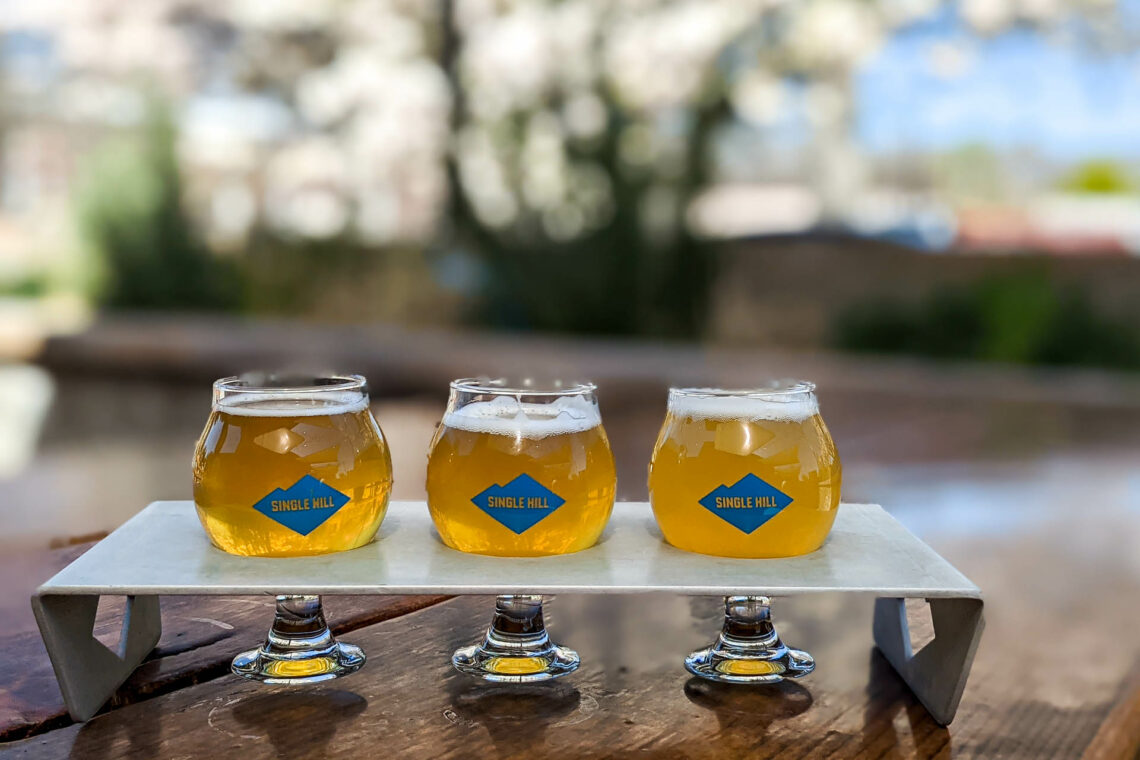 Being a couple of IPA enthusiasts, I’m not sure we could have spent two months in Central Washington without making a trip over to hop country. Luckily, Yakima was just a couple hours from our place in Leavenworth. The Yakima Valley has risen to the rank of ‘hop capital of the world,’ accounting for 75% of the country’s hop production. In recent years, Yakima’s total hop harvest has even overtaken Germany, the long-running titleholder of world’s largest hop producer. Hops were first planted in the valley in 1868 and, with prime growing conditions including well-drained soil and abundant sunshine, it’s gradually become one of the most successful hop regions in the world.

If you’re a fellow hop-head, there are a number of breweries in the valley sprinkled amidst the nearly 40,000 acres of hop plants. Some are brewing some interesting beers with the valley’s experimental hop varietals. Some, like Bale Breaker, even brew with fresh hops grown on their own hop farms. If you’re having trouble deciding where to go first, check out Yakima’s Craft Beer Trail for some inspiration. Additionally, read on to learn about some of our favorites in both Leavenworth and Yakima. We put in a solid effort at sampling, but quickly discovered there are more hazy and hoppy Washington IPAs than you can shake a stick at.

Icicle Brewing’s founder is no stranger to the ingredients that make good beer. Oliver Brulotte’s family has been working in the hop industry for more than 140 years, and he was a fifth-generation hop farmer on his family’s farm in Prosser. In 2011, he chased a dream and opened Icicle Brewing in Leavenworth.

This Leavenworth favorite is committed to using local ingredients and even sources its water from nearby Icicle Creek – a mountain stream that winds up near the Cascade Crest. They’re also a member of 1% For the Planet, donating 1% of their distribution sales to environmental non-profits.

Like a growing number of craft breweries, Icicle seems pretty heavily focused on IPAs and hazy IPAs – which is great for hop lovers like ourselves. They’ve got several flagship beers that are offered year-round, as well as a number of limited releases in their Peak Seeker IPA Series (west coast style) and Enchantments IPA Series (hazy). They also offer a few releases exclusive to their taproom. We tried a total of nine of their hop-forward creations while we were in town, including a flight of four out on their patio and five crowlers for carryout. Our top picks: the Talus Hazy IPA and Cashmere Hazy IPA (both from their Enchantment Series), as well as the 10th Anniversary DIPA. 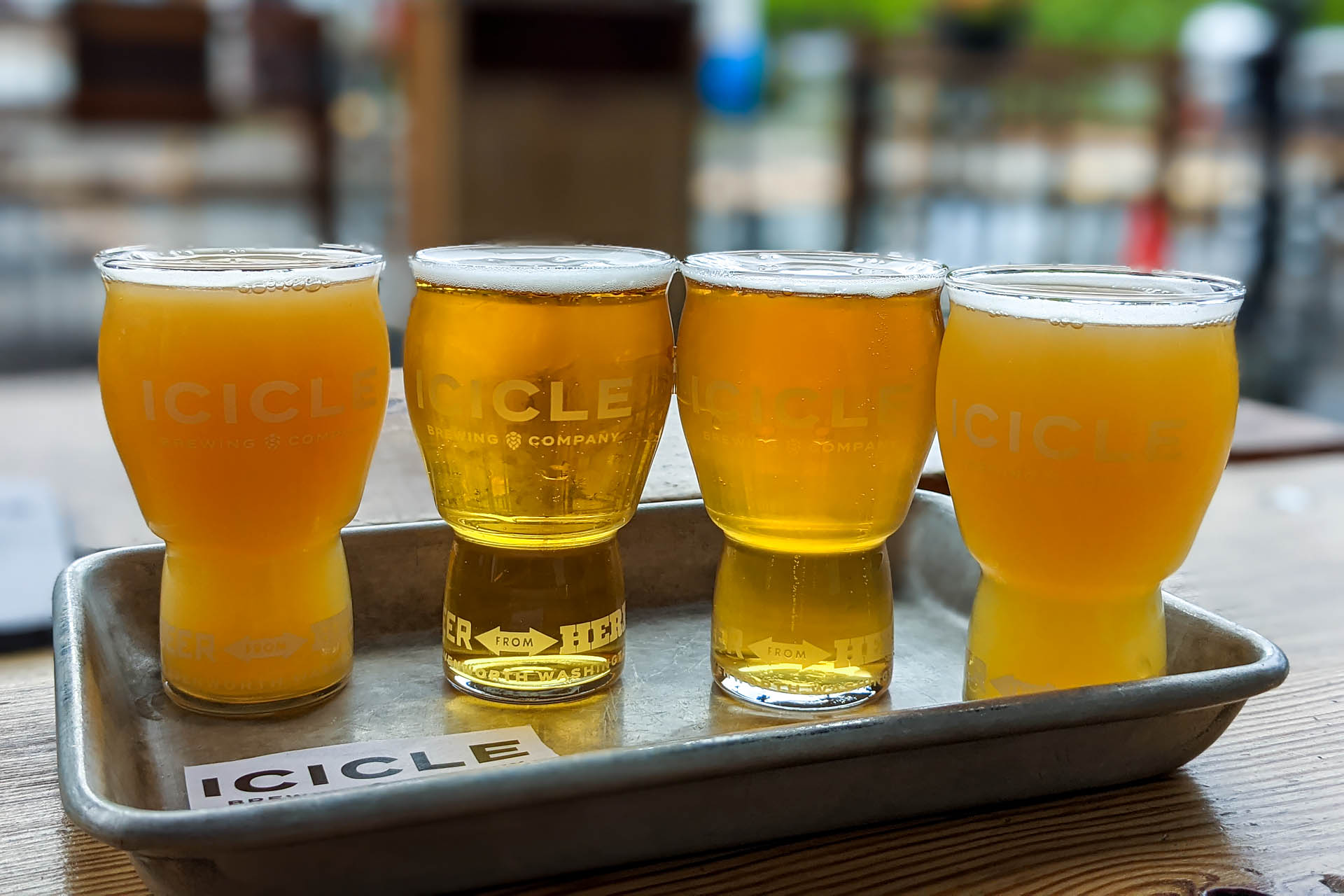 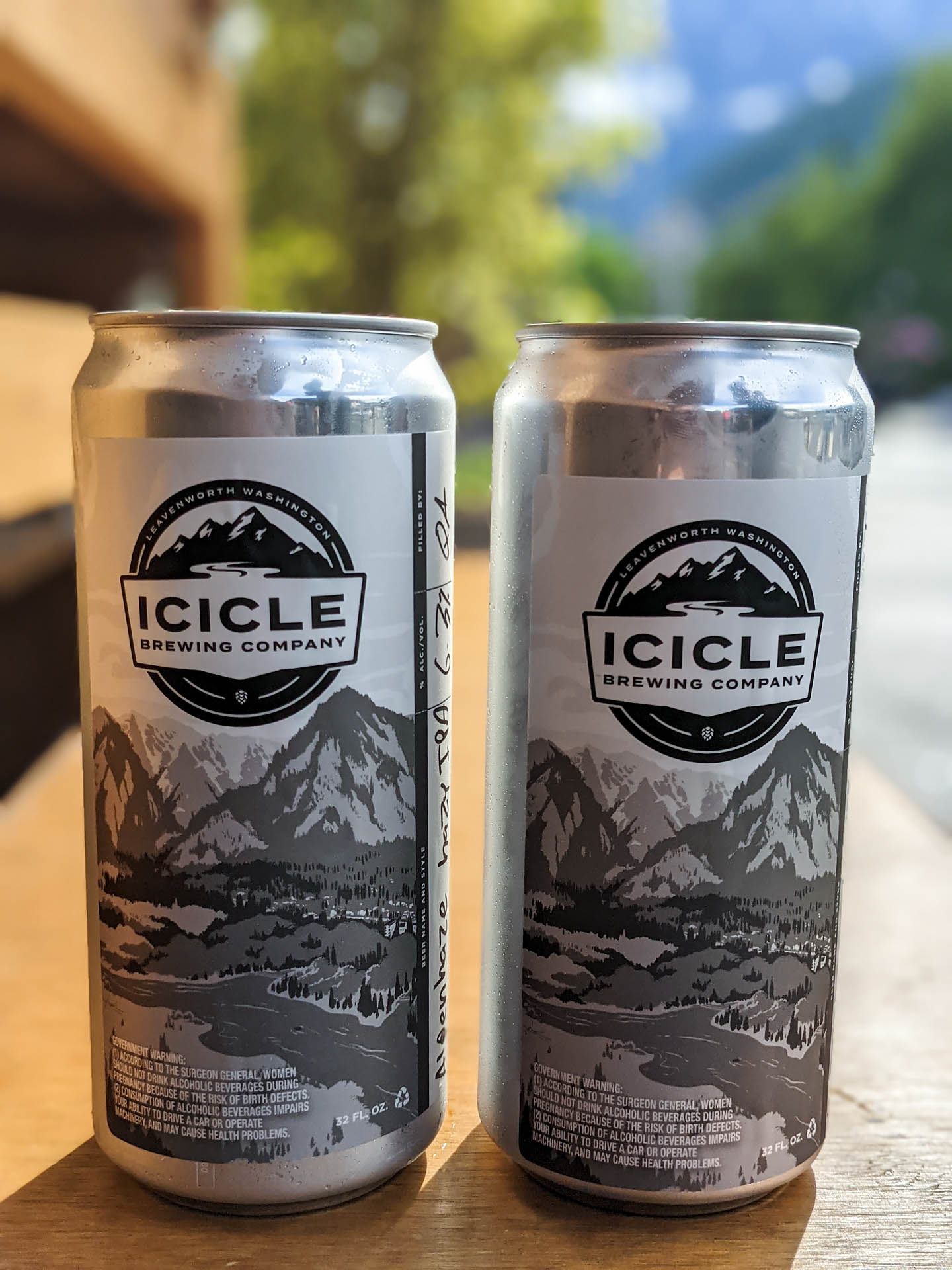 Pro tip: Don’t miss happy hour! On Tuesday, Wednesday and Thursday afternoons you can get 32-oz crowlers to-go for just $5.50 (normally $11)! This is one seriously good deal for some seriously good beer.

As their name suggests, Doghaus Brewery is all about dogs and all about beer. When you visit their website, rather than the standard 21+ question, it asks you ‘On a scale of 1–10, how do you feel about dogs and beer?’ The two choices are: ‘not a fan (1-6)’ or ‘great (7-10).’  If you click ‘great,’ it lets you enter the site. If you click ‘not a fan,’ it sends you to a Google search for cat-themed wineries. I seriously laughed my ass off. It’s pretty much the greatest beer site I’ve ever seen.

Located in the basement of the LOGE Leavenworth Downtown hotel, Doghaus really puts the nano in nanobrewery. Claiming the title of ‘smallest taproom in Washington state,’ their tasting room is maybe 10’ x 7’ and seats about five. There’s one table, a counter with a couple stools, and one random chair. Surprisingly, there were eight tap offerings when we visited, which was nearly double the number of chairs.

Don’t judge too quickly, though. Doghaus is proof that size doesn’t matter, as their beers were surprisingly tasty. We tried the Dirty Dog Hazy IPA and the Double Dog Dare-U DIPA. The Dirty Dog was our favorite, but the DIPA was also really delicious. Additionally, they are keenly aware of their space limitations, and offer plenty of to-go options. If you can’t find a chair, Doghaus offers single bottles, crowlers, and growler fills. If you do choose to sit down for a drink, they offer not just standard pints and flights, but also individual 4 oz pours if there’s just one or two things you want to sample. 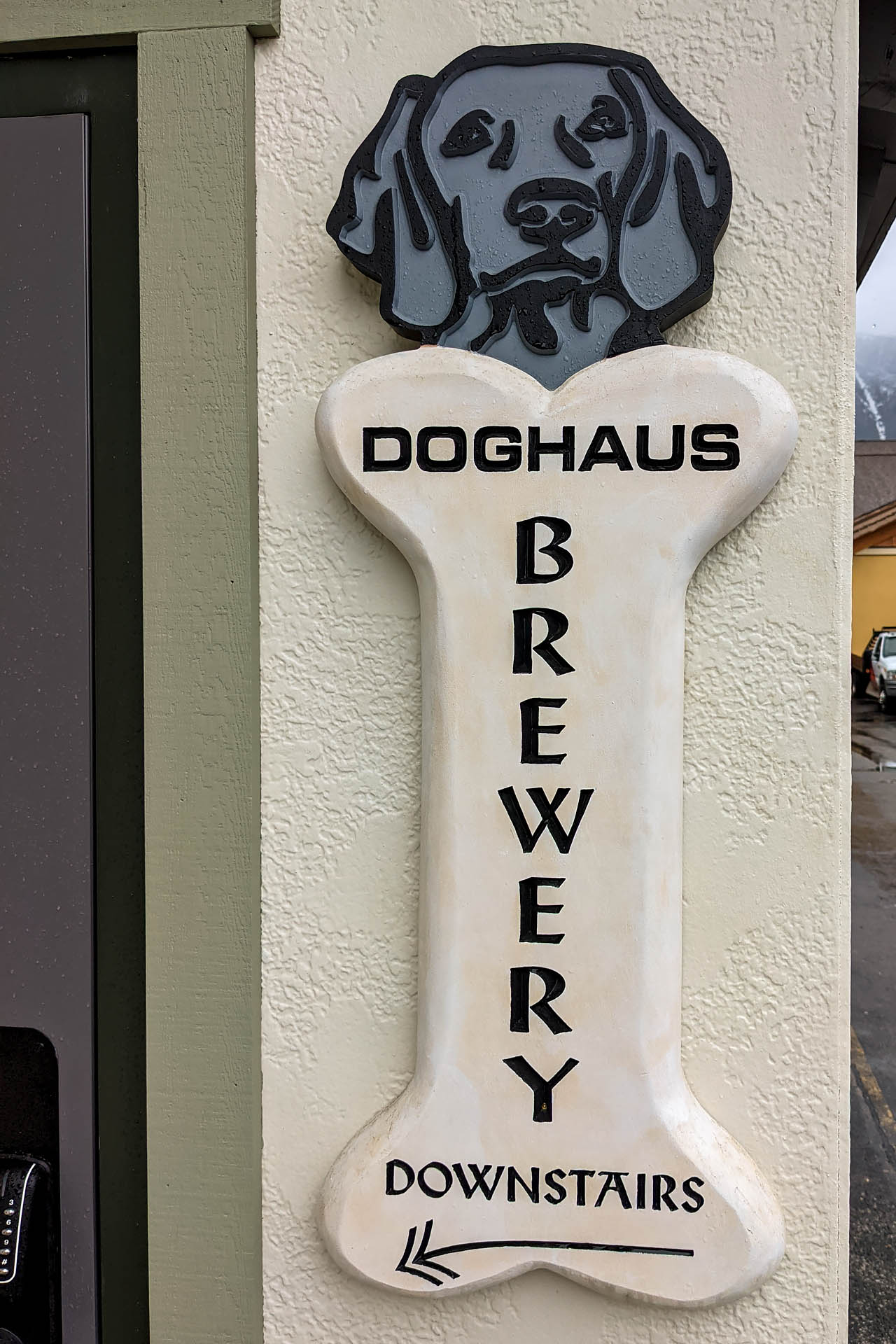 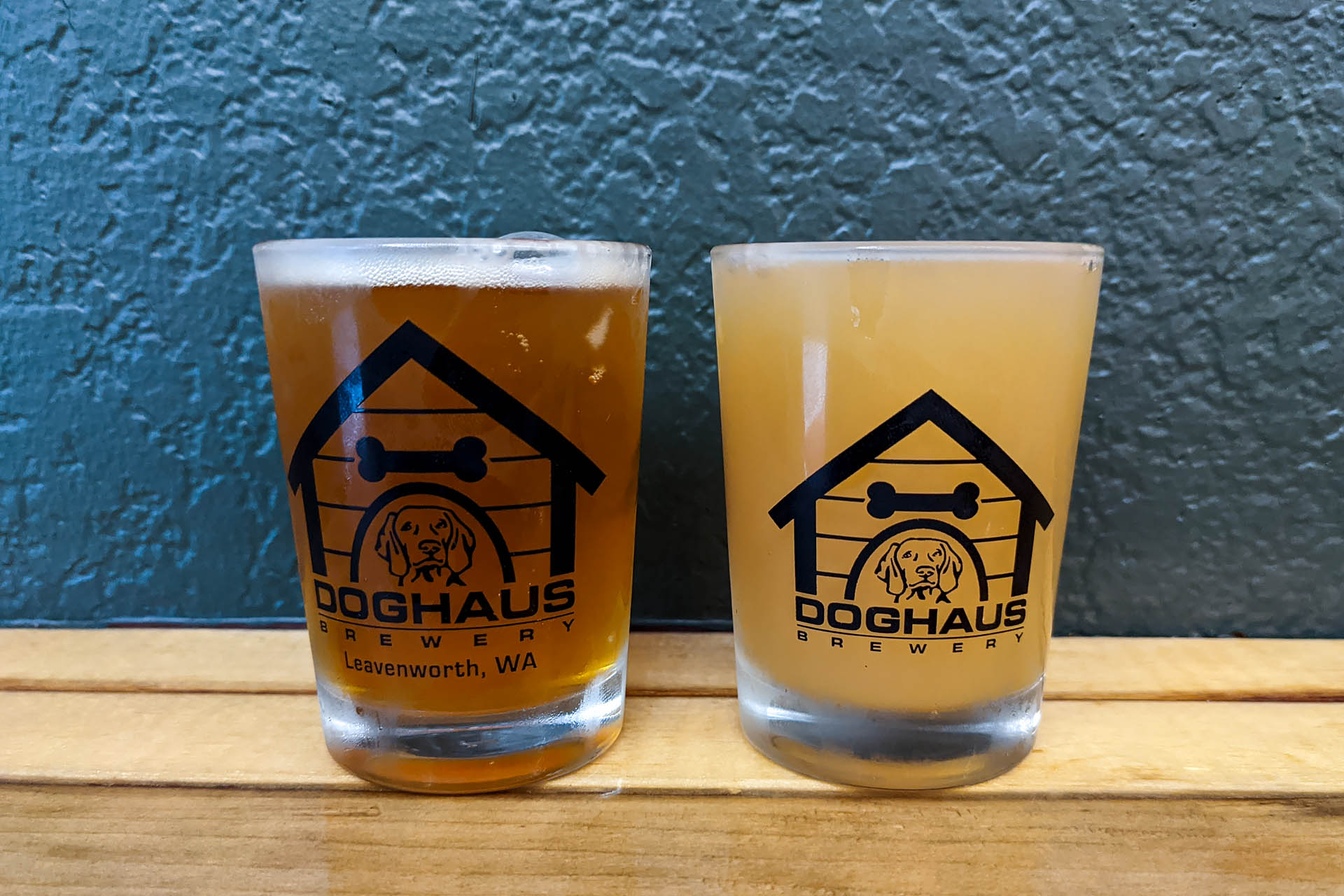 If best website functionality goes to Doghaus, then the prize for best logo easily goes to Wandering Hop. Maybe we’re biased because we spent a year backpacking and are now living semi-nomadically out of a Subaru Crosstrek. However, the little vagabond hop in his too-cool-for-school shades is freakin’ adorable.

As you’d probably surmise, the owners here have two passions – beer and traveling. Totally relatable. They began brewing in 2015 and opened the small taphouse in its current Yakima location two years later. Their motto is ‘we’re going places’ – representative of their quests for new adventures, inspired beers, and continuing to grow the brewery of their dreams. We love it.

We sat outside on their small patio to try a flight of five beers, and also grabbed a can to-go. Our two favorites were easily the 369 Damn She Fine! NEIPA (heavy on the Mosaic) and the Hometown Pride IPA. A few weeks after we visited, we saw that they added an Orange Creamsicle IPA to the menu. We only wish we’d been in town to sample that one. 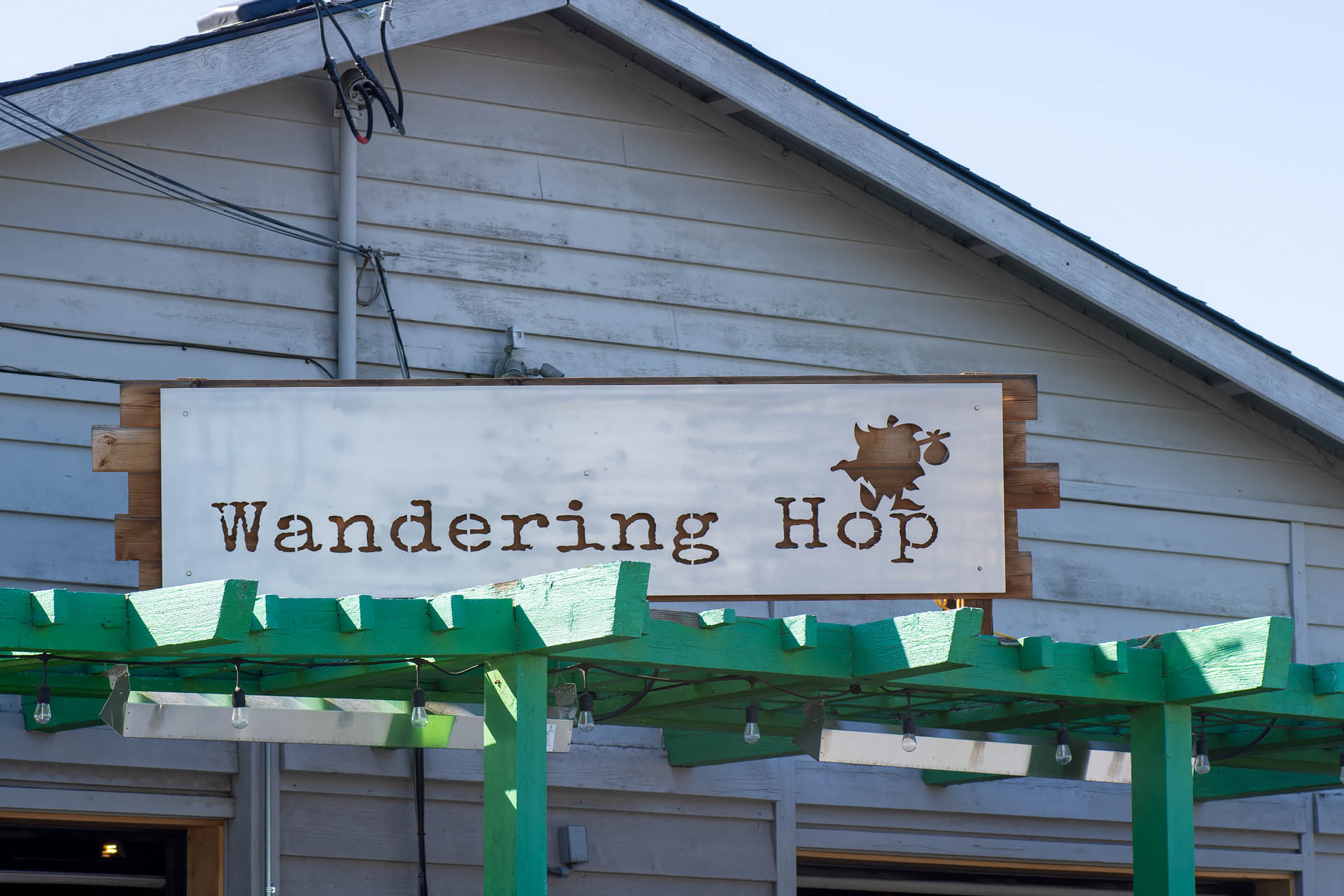 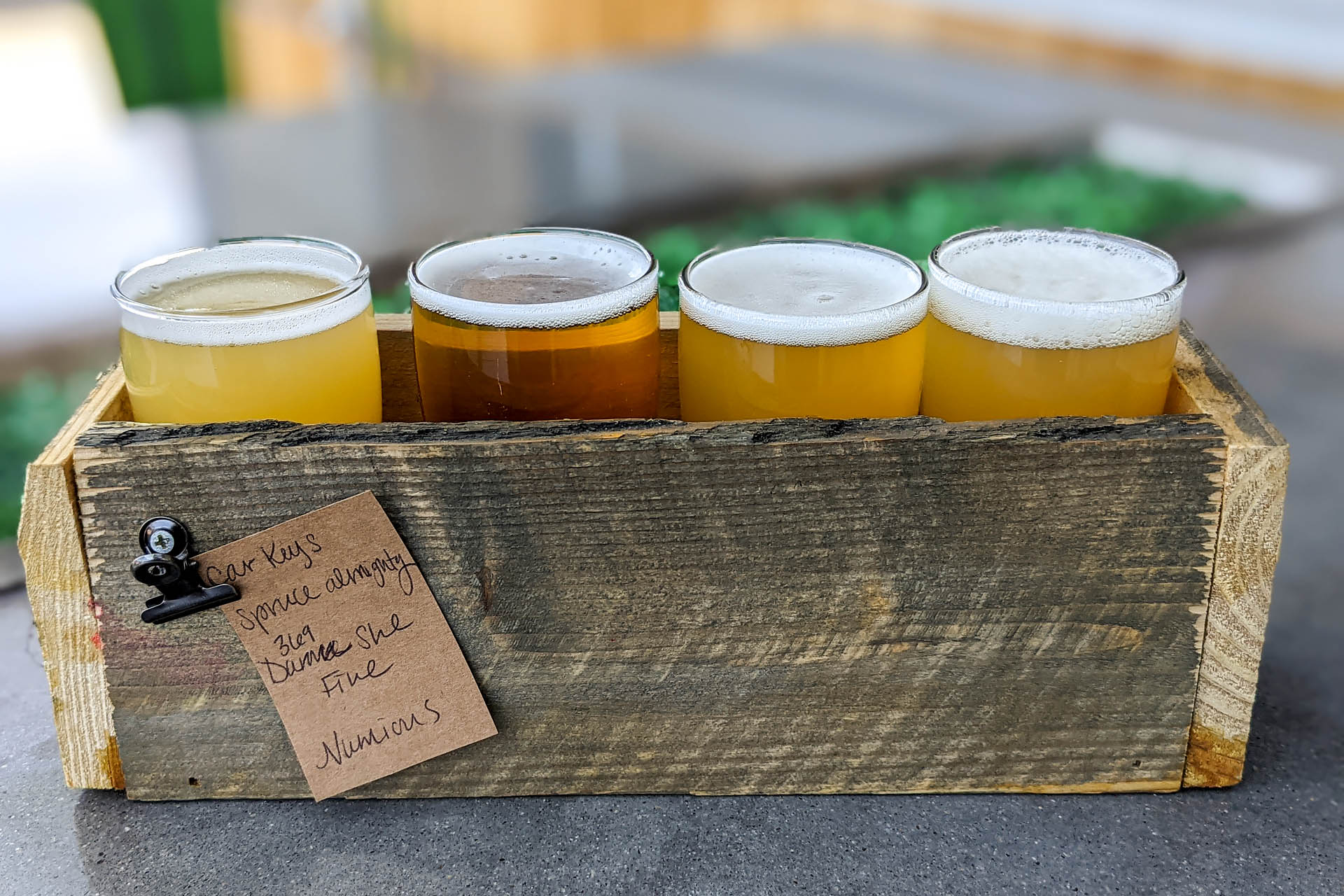 Another favorite of folks around Yakima, Valley Brewing is the brainchild of three friends who collectively discovered a love of craft beer after graduating from college. Their focus is on hop-forward IPAs and hazy IPAs, and they have a pretty extensive menu of flagship and rotating experimental brews. They have an absolutely gorgeous outdoor space that’s perfect for enjoying a pint on a sunny afternoon, and they also offer great carryout options. In addition to their 32-oz crowlers (with super cool dual-can carriers), they also allow you to make mixed six-packs from their available 16-oz cans.

They weren’t offering flights when we visited (not sure if this is typical or pandemic-related), so we were only able to try two their IPAs – the Octane 87 IIPA and Citra Ass Down IPA. Surprisingly, we both picked the imperial as our favorite. Personally, I tend toward the more fruity Citra hops, but this one was a little muted in terms of those big citrus notes. 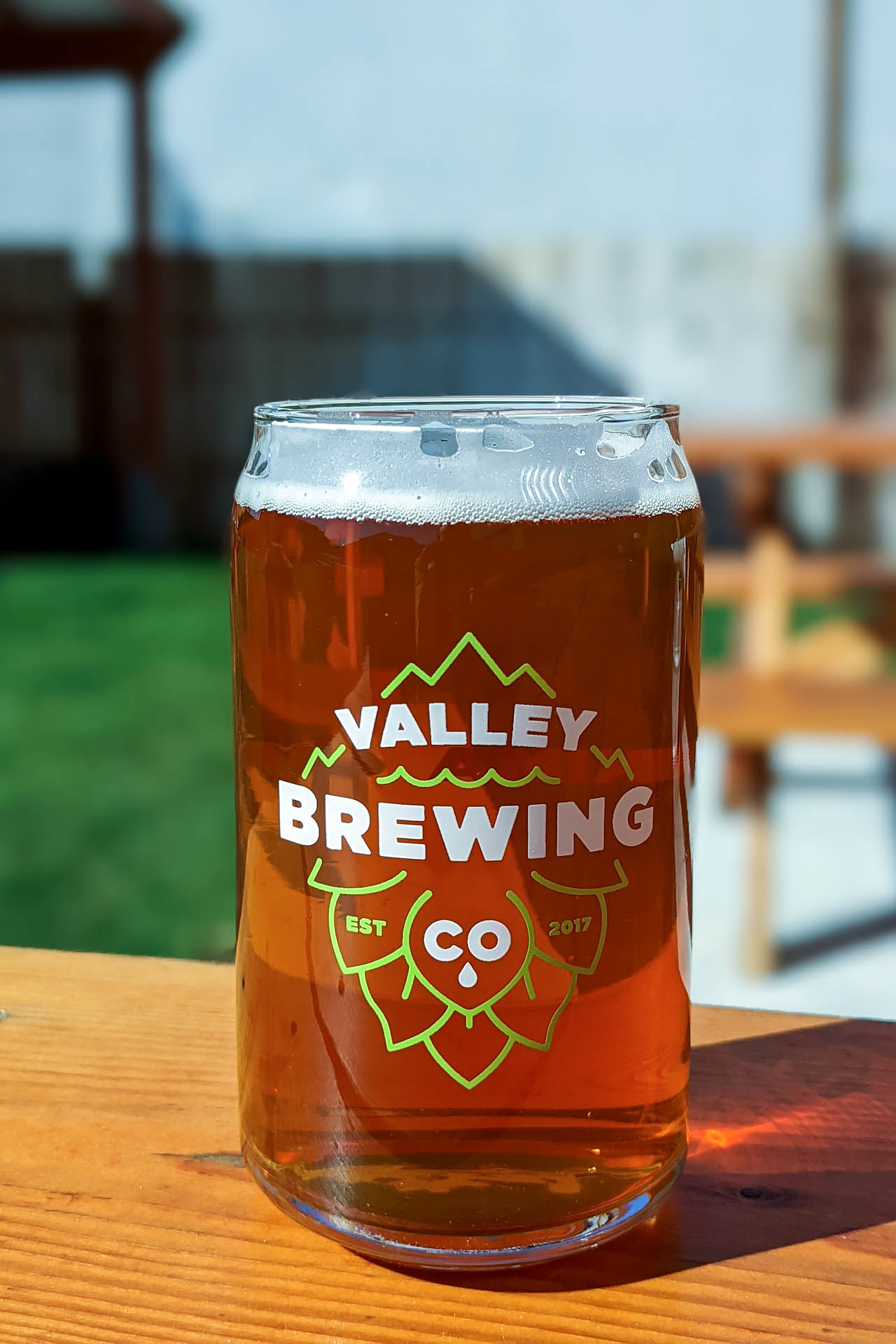 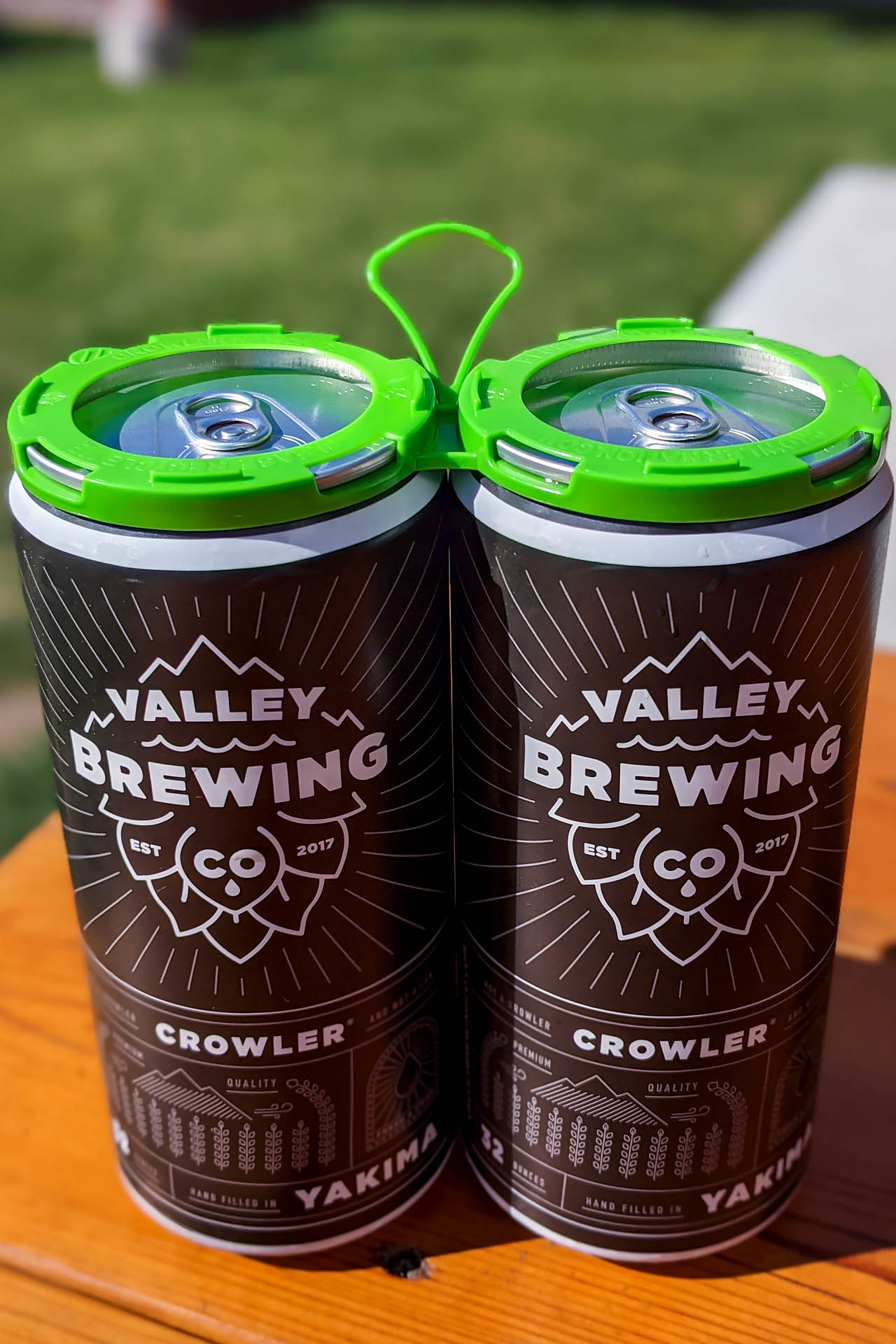 This Yakima brewery gets its name from the ‘single hill’ fields that are used in hop farming. During hop breeding, each individual cross is planted on one of these ‘single hills,’ where it becomes the source of a single, unique hop variety. I love when I can try new beers and learn cool stuff at the same time. Given the growing number of experimental hop varieties being produced by local breeders, we imagine Yakima must be home to a pretty good number of these ‘single hills.’

Overall, Single Hill was one of our favorite taprooms in Yakima. The staff was super friendly, the outdoor area was spacious, and the beer was really good (the can art was also seriously beautiful). Additionally, they had a huge variety of cans to-go, and they allowed you to buy singles or make your own 4- or 6-pack. For favorites, the Public Knowledge DIPA was the clear front-runner, with the Hop Sabotage finishing a close second (though probably first in can design).

We’re waiting for my dad to arrive in a couple weeks before we bust the second series open, but the first was awesome. It’s so much fun to be able to compare the different hop profiles on the same base, and to also try a bunch of lesser-known hops. If we lived in Yakima, we’d definitely be picking these three-packs up on the regular. 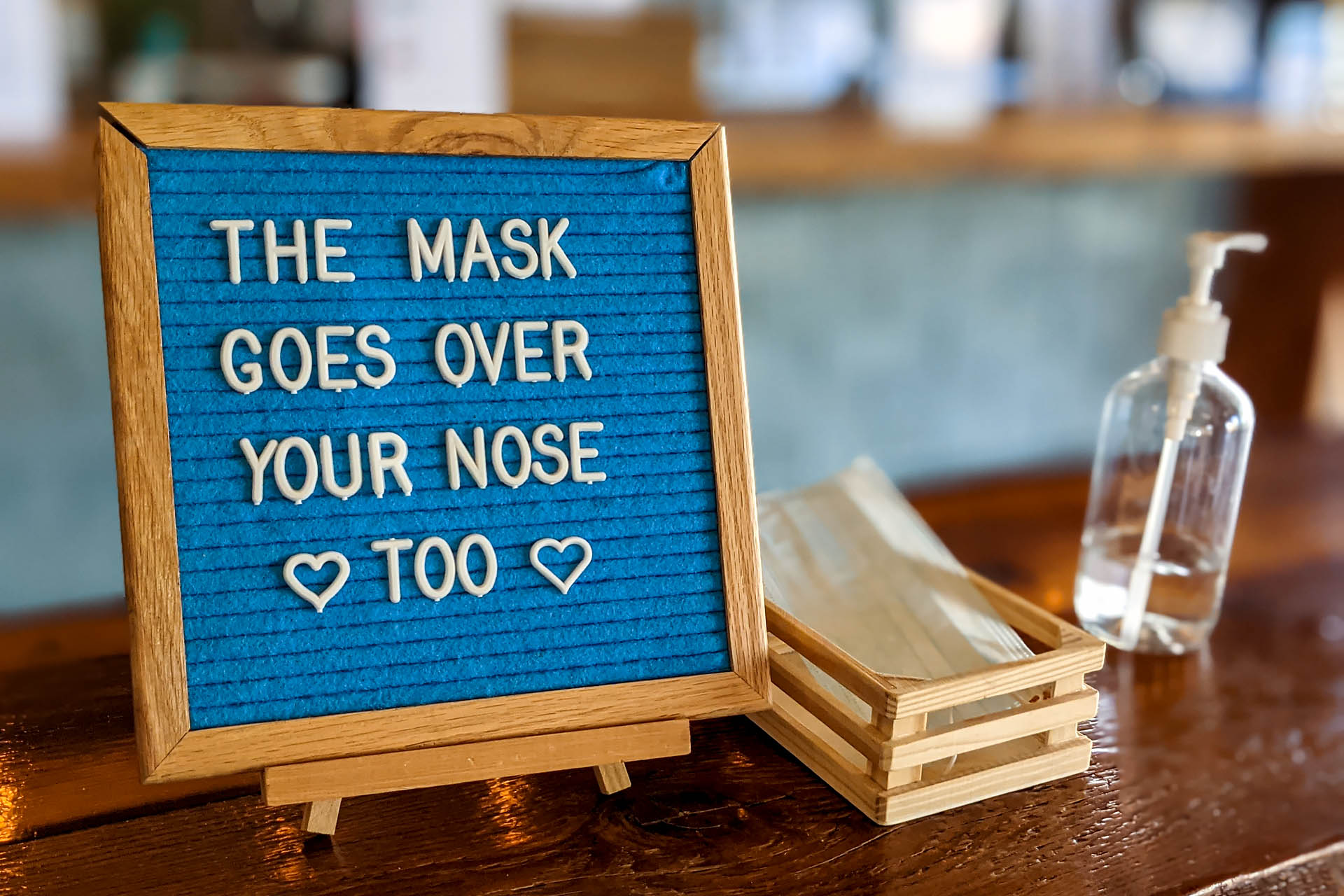 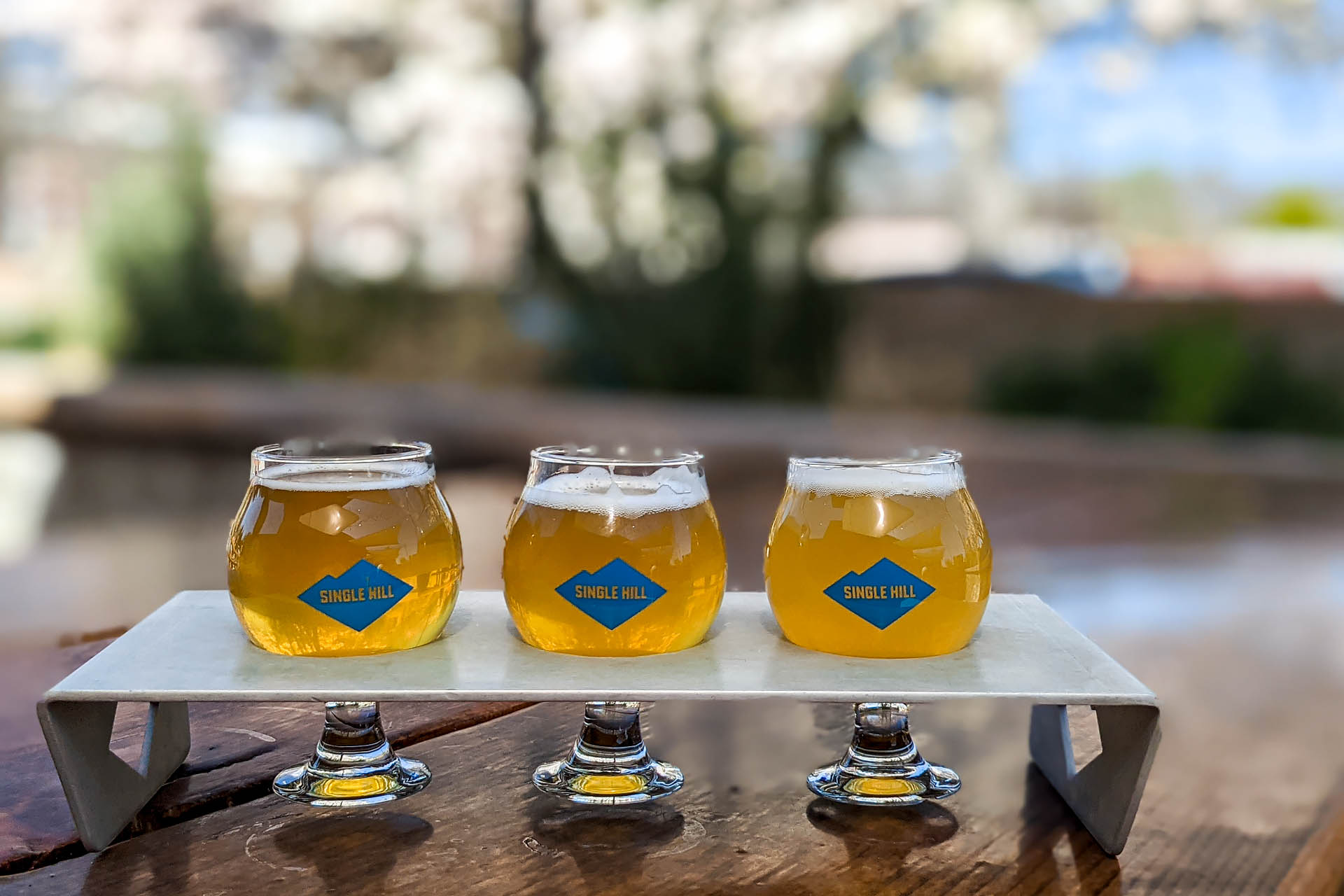 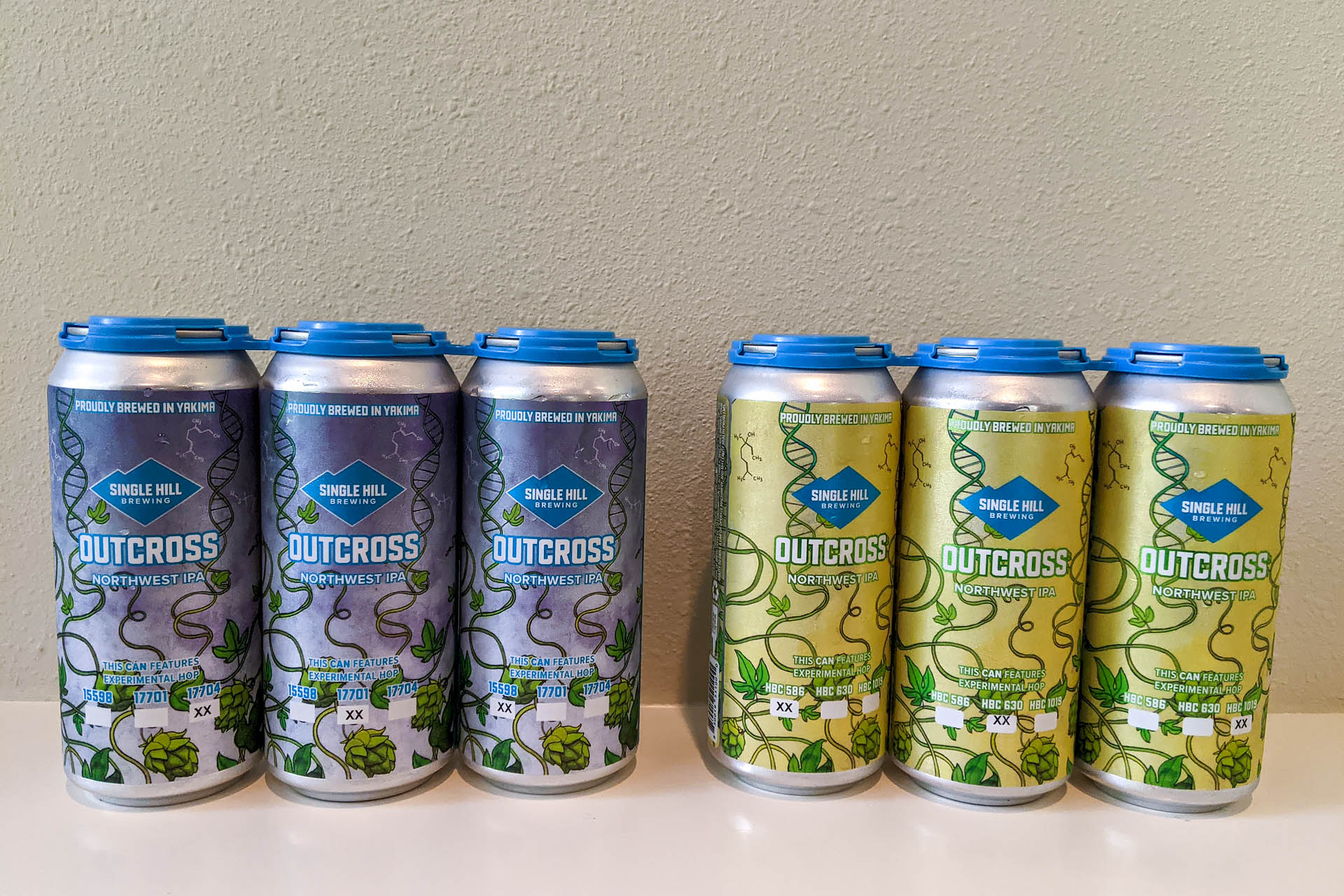 Note: When you order from the taproom menu, some beers are on tap while others are only available in cans. When we visited, it wasn’t super clear on the menu which were which. Flights can only be made from the tapped beers, so it took us a few minutes to figure out which IPAs we could actually sample in our flight. With only a few of our choices on tap, we ended up grabbing a number of cans for carryout (another reason we appreciate when breweries sell singles).

While Bale Breaker has only been brewing beer since 2013, this family-owned business has a much longer history in Yakima. The trio of sibling-owners are fourth-generation hop growers. In fact, their great-grandparents first planted hops in the Yakima Valley in 1932 – a full year before the end of Prohibition. Only eight years after opening shop, the brewery is now the third largest independent craft brewery in Washington. It’s pretty rare to find a brewery with that kind of history – and with a reputation for great beers – so we were really stoked to check this one out.

Bale Breaker’s taproom is located just outside of Yakima on the family’s commercial hop farm. They’ve got a beautiful, dog-friendly outdoor space, and offer flights of six from their impressively hopped-up tap menu. They were offering a ‘Dealer’s Choice’ when we visited, so we ended up sampling the Miami Weisse, Hop Country Session IPA, Mango IPA, Clarity Rarity No. 5 Hazy IPA, Mashtun Kutcher West Coast IPA, and Hindsight 2020 Imperial IPA. We also ended up scoring a bonus pour of In the Lup No. 3, the latest release in their west coast series.

While we are not really into hefeweizens (sorry, Miami Weisse), the IPAs were all really tasty. The clear winner, though, was the Mango IPA – hands down one of the best beers I’ve ever tasted. It was seriously like sucking on a freshly picked hop (but without the unpalatable bitterness). The beer is made with fresh mango puree along with hops grown on the family farm. They’ve apparently brewed it for the last four years, and 20% of the proceeds are donated back to the local migrant community… a winner on so many levels!

For runners-up, we chose the Hindsight 2020 and Mashtun Kutcher. And with several of their standard runs available in cans, we grabbed a mixed pack of the Topcutter IPA, Field 41 Pale Ale, Leota Mae IPA, and Hazy L IPA. The Hazy L was a silver medal winner at the 2020 Great American Beer Fest, so we’re pretty excited to crack that one open. We’ll check back in once we’ve sampled the lot. 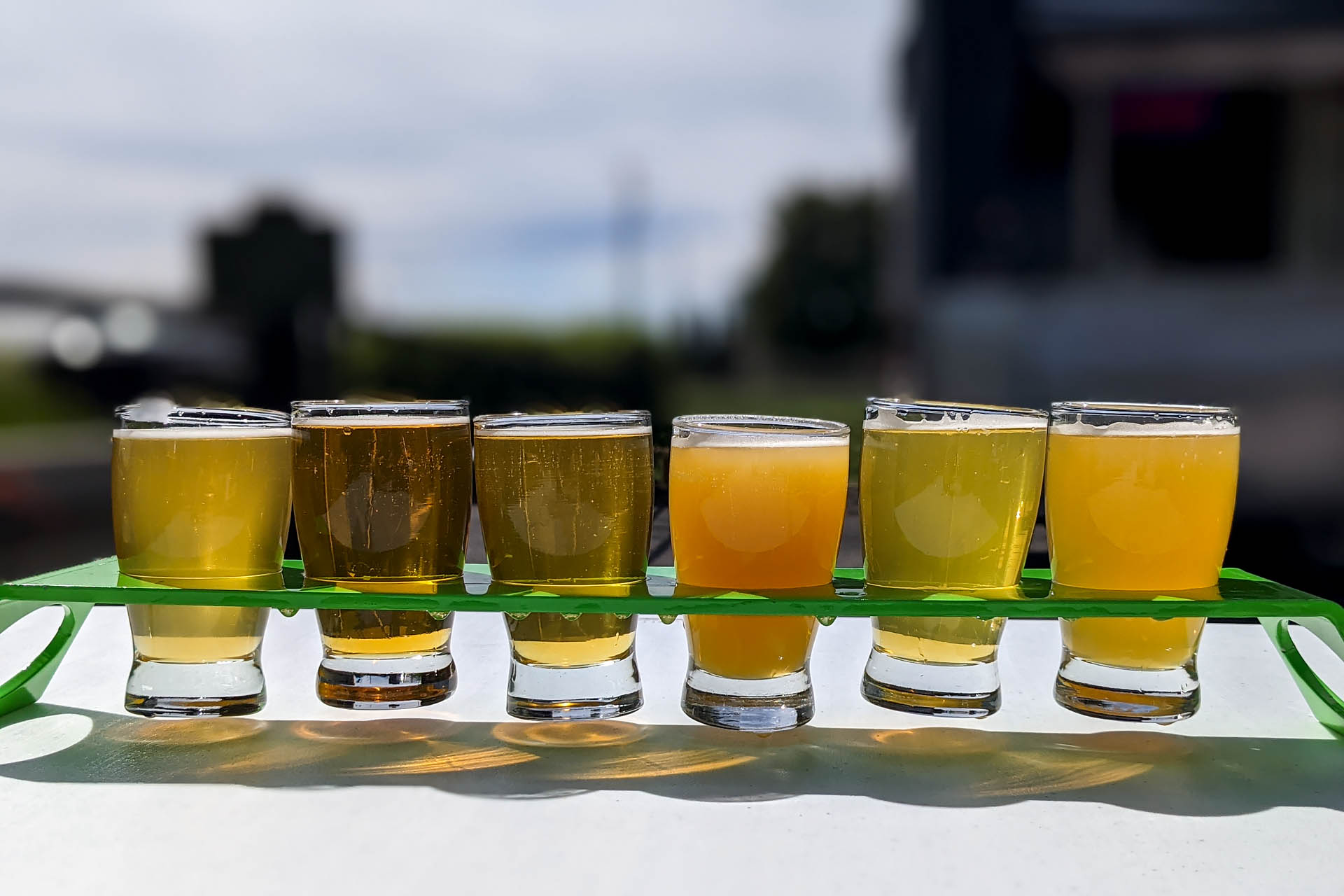 If you’re a craft beer enthusiast and find yourself anywhere near hop country, it’s most definitely worth a visit. There are so many small, independent microbreweries to support that have awesome missions and also brew some fantastic beers. Our only wish was that we were still going to be in town later in the summer/fall – when the air is filled with the aroma of fresh hop flowers ready for harvest. Cheers and happy tasting!