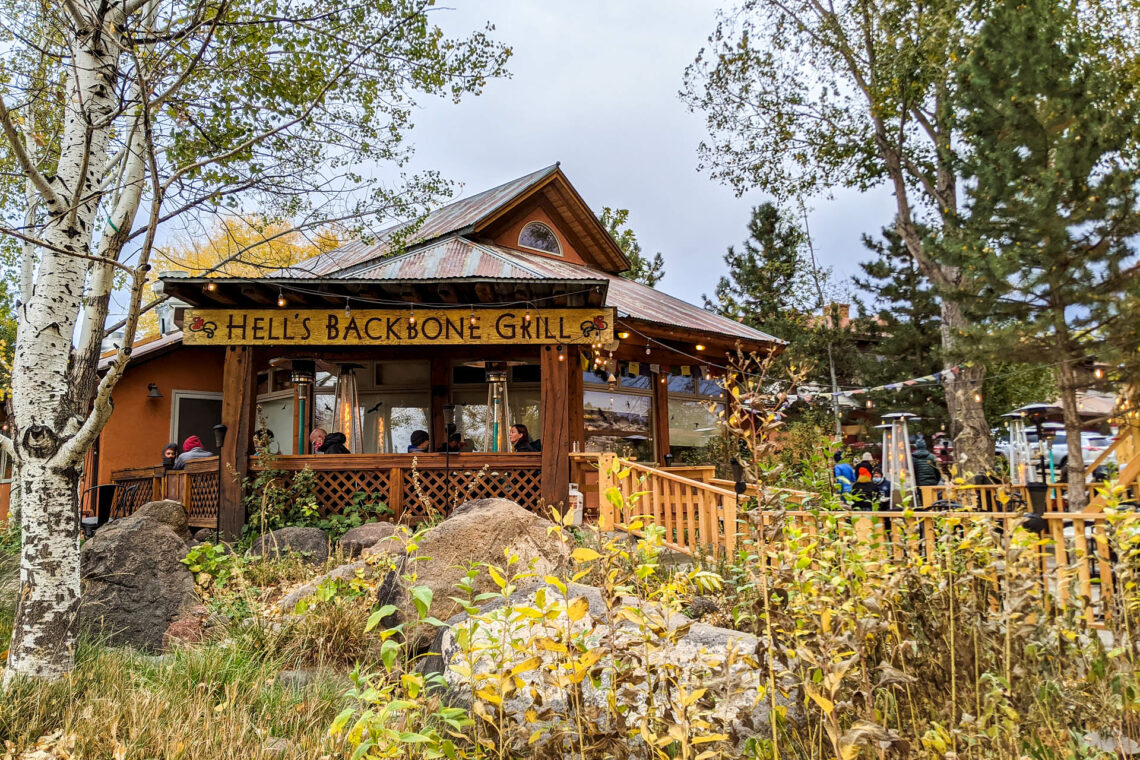 As we headed into the last week of October, we made our way from Durango, Colorado to Monroe, Utah for what would be our final stop for the year. Located in south-central Utah, Monroe is one of those tiny, pastoral towns that’s near absolutely nothing yet not too far from anything. It kind of reminded me of growing up in rural New Hampshire where everything is two hours away. Boston, the beaches, Providence, Hartford, Lake Winnipesaukee… I’m pretty sure no New Englander gauges distance in miles, rather we use ‘a couple hours’ as our precisely calibrated measuring stick. Monroe was similar. Salt Lake City, Moab, Zion – all were about a 2.5-hour drive.

Similar to those well-known Utah locales, the tiny town of Boulder is just over two hours from Monroe. Home to just two hundred residents, Boulder is nestled between the rugged terrain of Grand Staircase-Escalante National Monument, Capitol Reef National Park, and Dixie National Forest. Boulder has long been considered one of the most isolated towns in the country, though its position on Utah’s Scenic Byway 12 has helped it see an uptick in visitors in recent years. The scenic thoroughfare earned the distinction of All-American road status in 2002, a designation claimed by just 31 (one-third) of America’s scenic byways.

We decided to make a special stop in Boulder on our way from Durango to Monroe. During our three-month summer in Montana, our AirBnb host’s daughter told us if we ended up in southern Utah, we had to check out a restaurant called Hell’s Backbone Grill. An avid outdoor lover who’s extremely well-versed in the western part of the country, we were certainly keen to heed her advice. When we inspected the map, we saw that it would add a good couple hours to our drive. But how could we not stop? With the small, seasonal restaurant closing the day after we arrived in Monroe, this would be our only opportunity.

Our somewhat circuitous route through eastern and central Utah was gorgeous. As we followed 191 up through Moab and Canyonlands, the landscape was suddenly bursting with red rock and sandstone sculptures. We hit a few pounding rain showers around Moab, but the weather fortuitously cleared as we continued west. The most scenic portion of the drive came along UT-24, as we passed under the imposing sedimentary towers of Capitol Reef National Park. 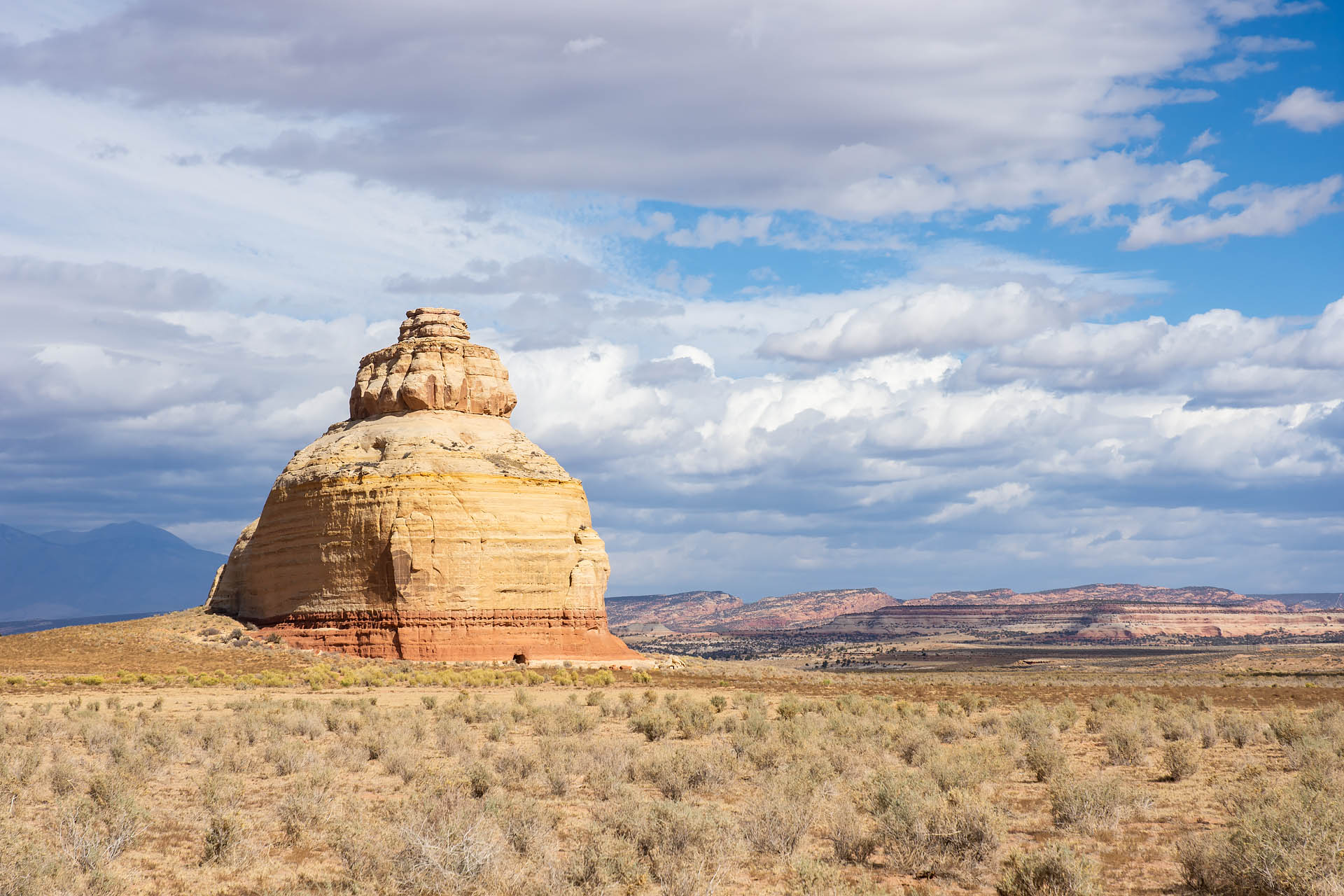 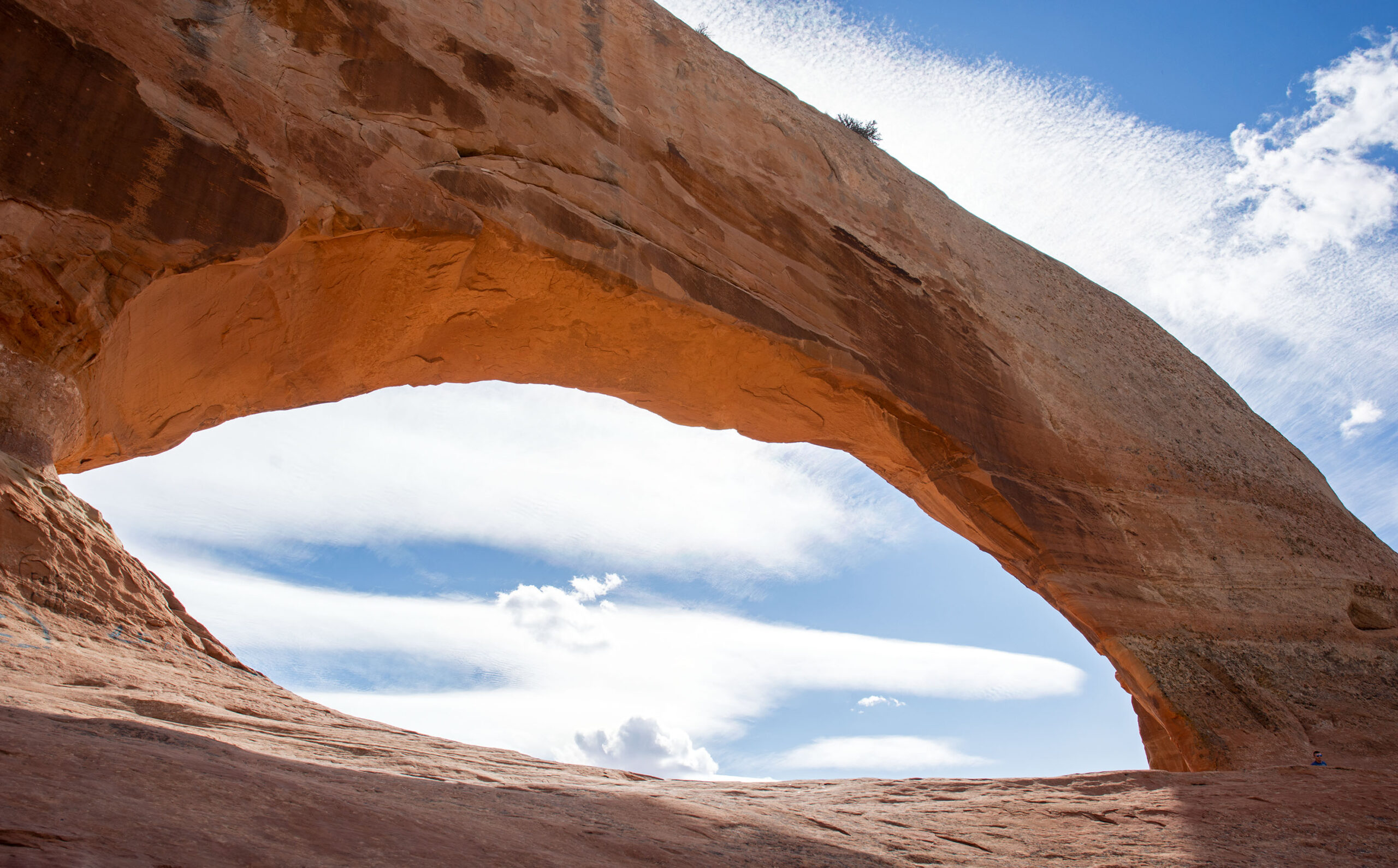 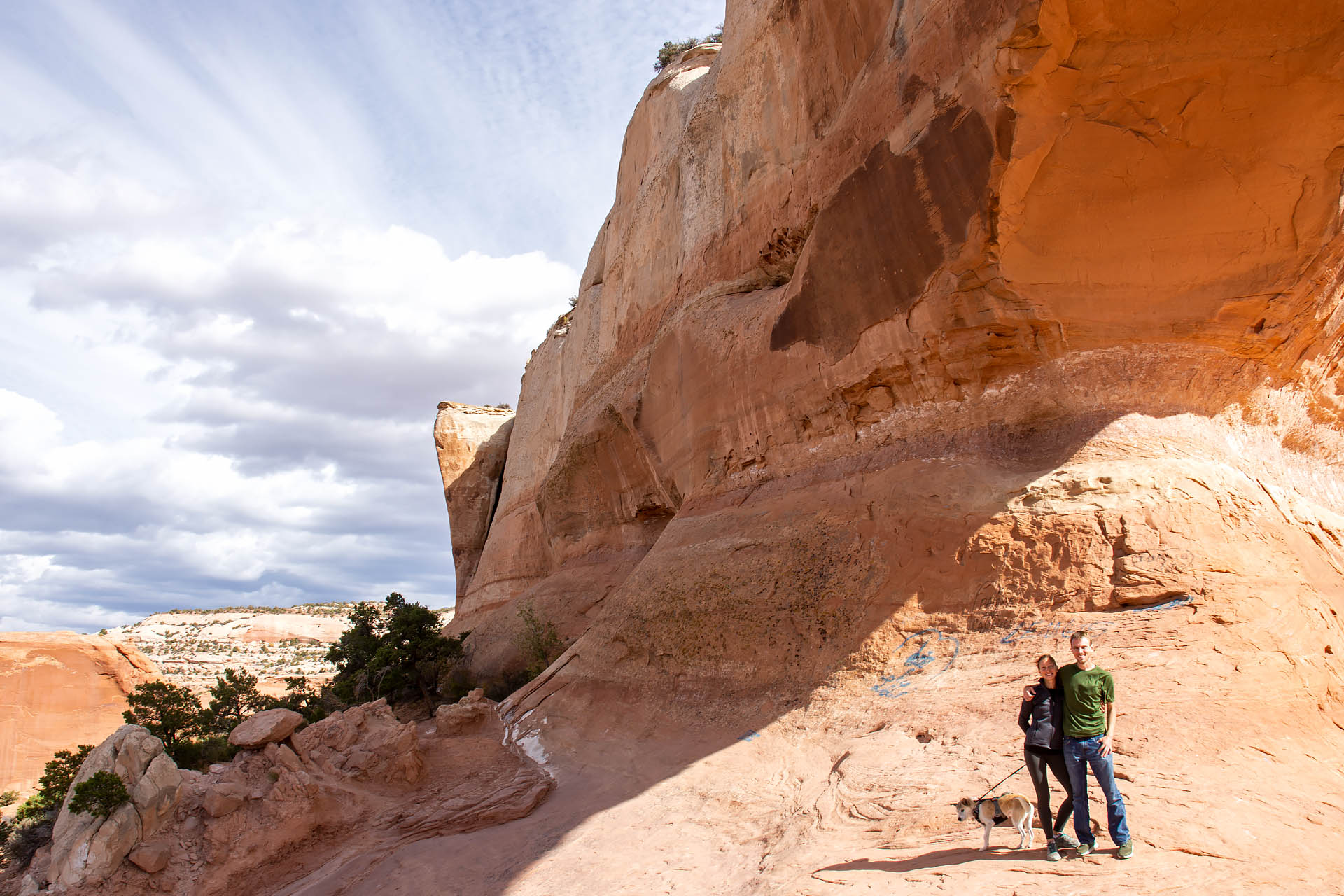 One of Cathedral Valley’s most iconic peaks is Navajo Dome. Rising some 1,100 feet above Highway 24, its summit is comprised of 180-million-year-old Navajo Sandstone. Even more striking, perhaps, is The Castle – a striated masterpiece of contrasting colors and textures. The bottom layers of Triassic-period sandstone are about 245 million years old, while the crowning pillars of Wingate Sandstone are thought to have formed some 200 million years ago during the Jurassic period. 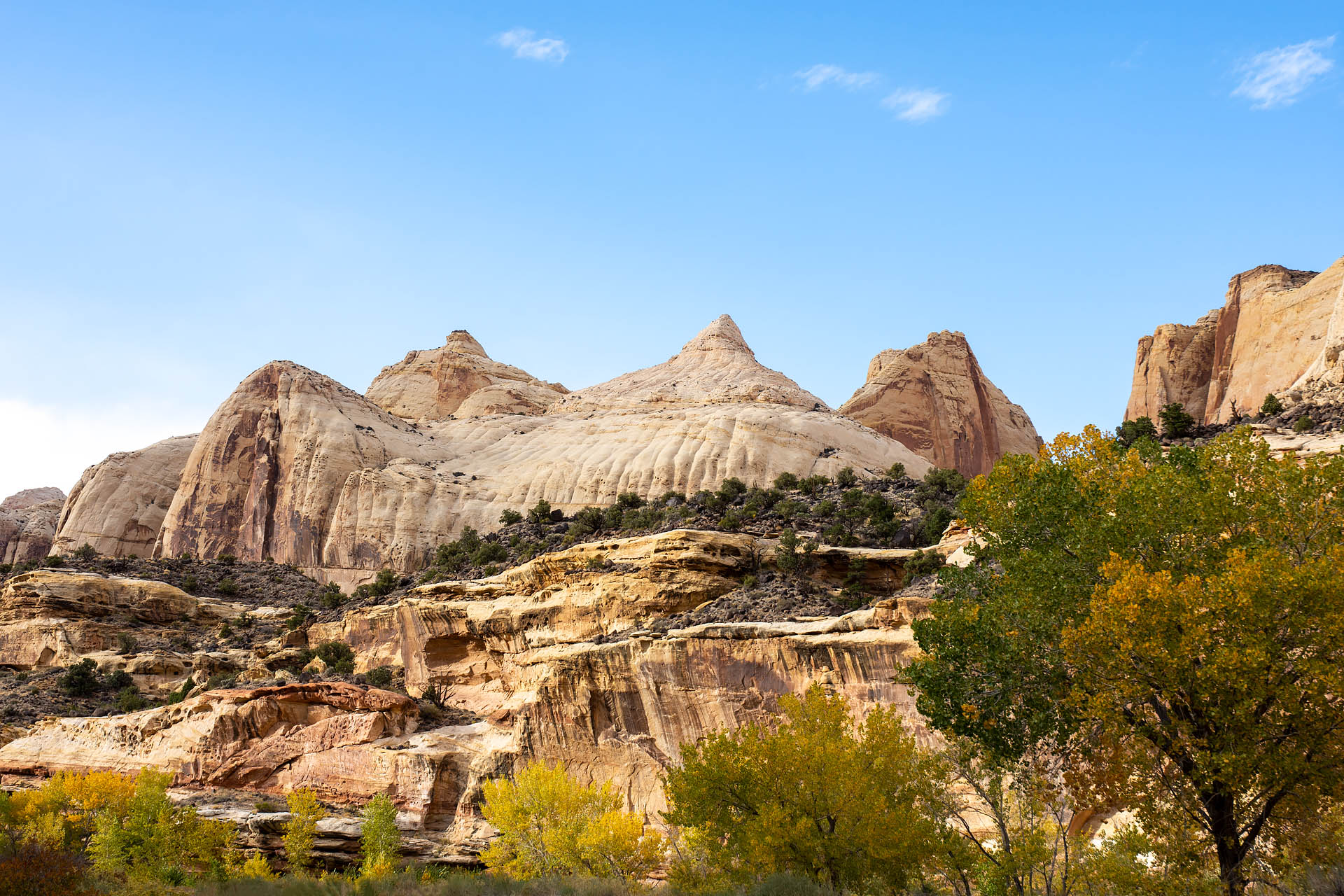 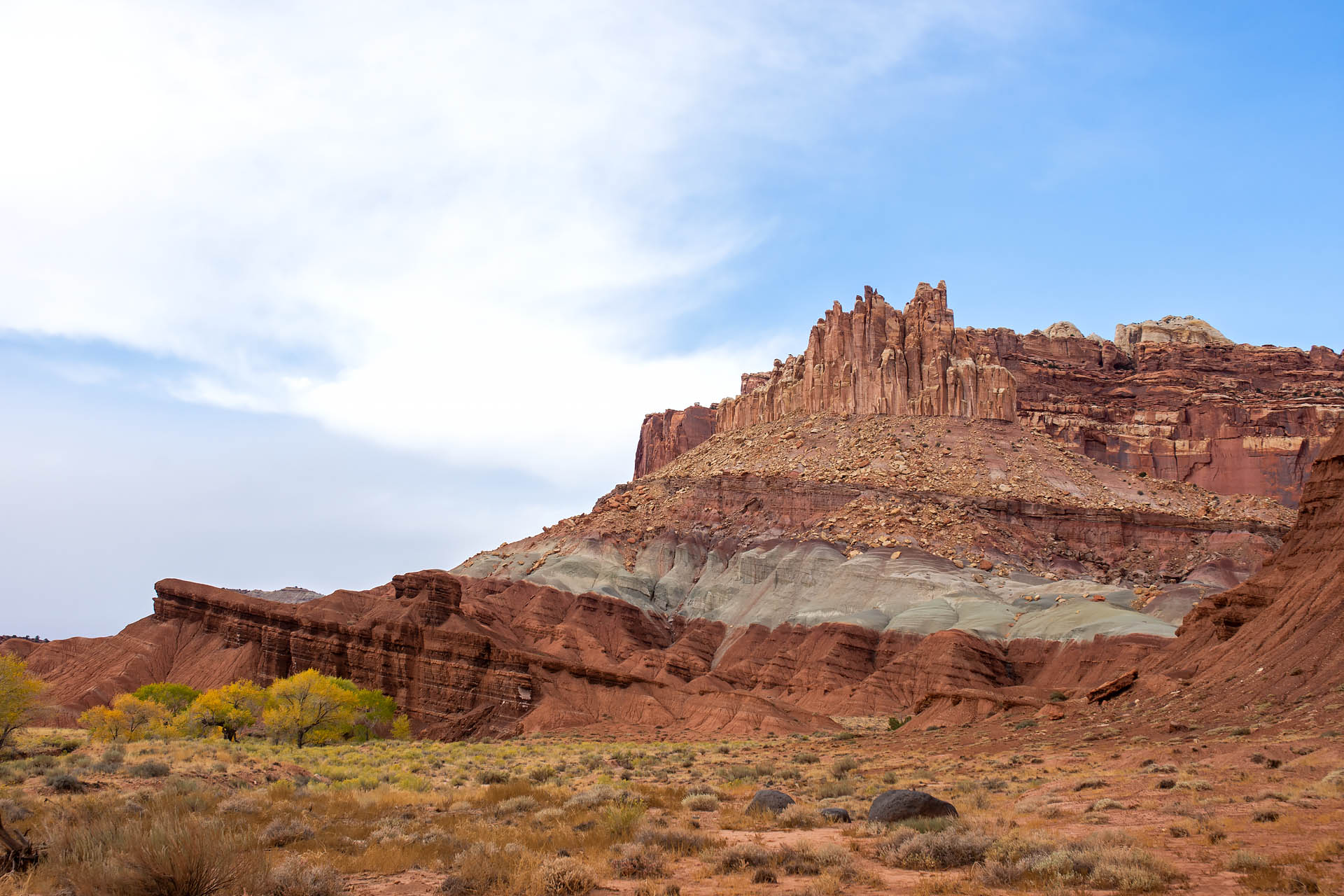 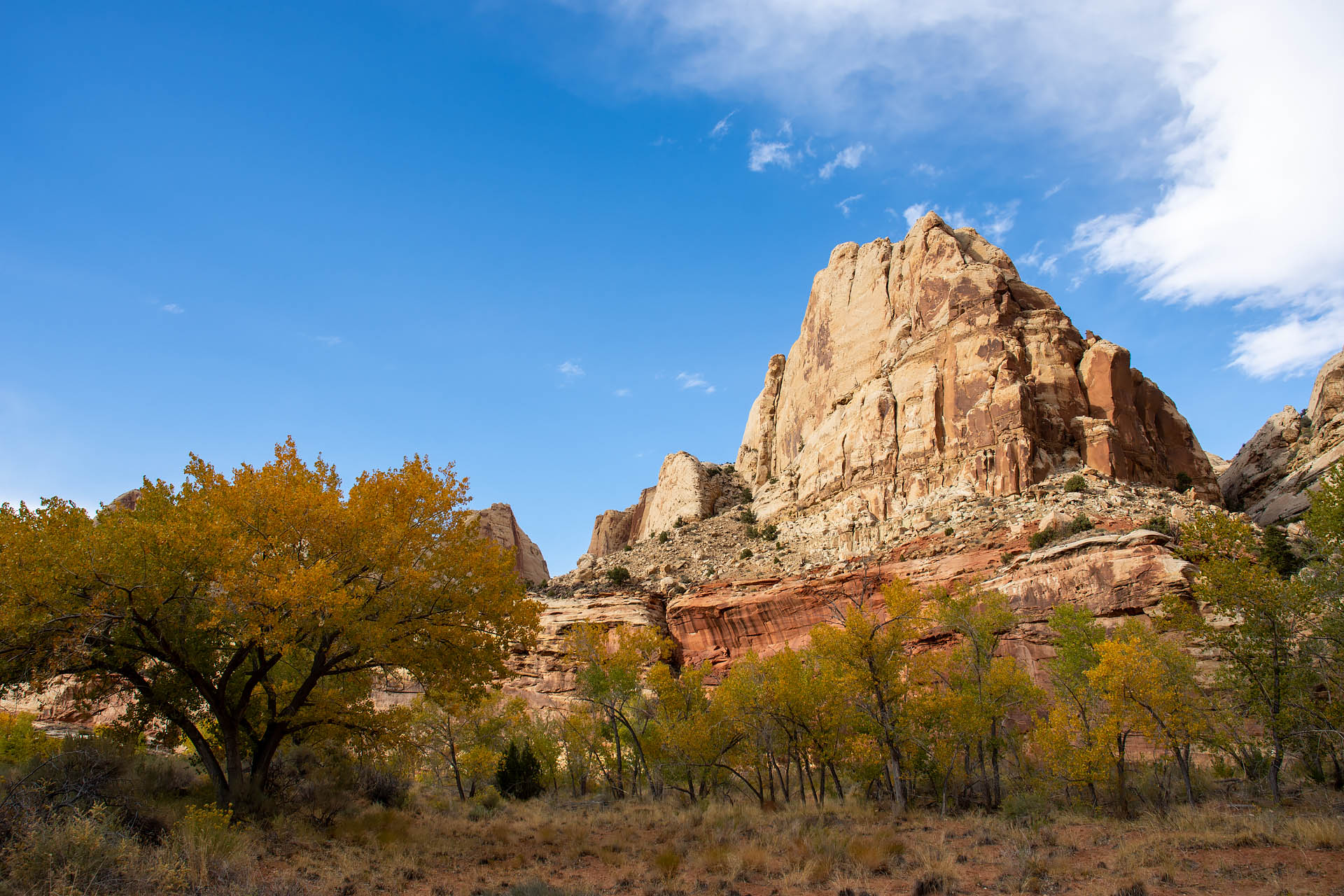 After driving through Capitol Reef, we picked up Scenic Byway 12 near the town of Torrey and followed it 35 miles south to Boulder. The town is indeed small, boasting little more than a post office, elementary school, town hall, fire station, church, mini-mart, and a couple of hotels. Located on the property of the picturesque Boulder Mountain Lodge, Hell’s Backbone is a small, farm-to-table restaurant with a big reputation. Chef-owners Jen Castle and Blake Spalding opened the restaurant in 2000. Neither had a culinary background or industry experience. However, in the last two decades they’ve cemented Hell’s Backbone as one of the best restaurants in the southwestern U.S. In fact, the humble eatery has been a James Beard nominee or finalist every year since 2017.

Focused on organic, ethically-sourced food, many of the fruits and veggies featured in their distinctive dishes are grown right there on their six-acre farm. Meats and produce not grown on-site are sourced from local farms and orchards. The pair is committed to sustainable practices and environmental responsibility and strongly values community involvement. They work with a number of local non-profits and are advocates for protecting nearby lands – both public acreage and sacred tribal grounds. Excited about their food and their mission, we couldn’t pass up a chance to visit, even if it did add two hours to the drive.

Always endeavoring to stay COVID safe, we ordered our food for takeaway. We were pleasantly surprised to find the restaurant set on beautiful grounds, with a sprawling greenspace that was dotted with a handful of picnic tables. Better yet, although dogs are not allowed on the restaurant patio, Sanchez was allowed on the expansive lawn. Thus, we were able to grab a table and enjoy our meal outside with no one within fifty feet of us. It was probably the coldest dining experience we’ve ever had, with blustery gusts dropping wind chill temps to near freezing. Our dinner was fantastic, though – well worth the circuitous journey and frigid air. 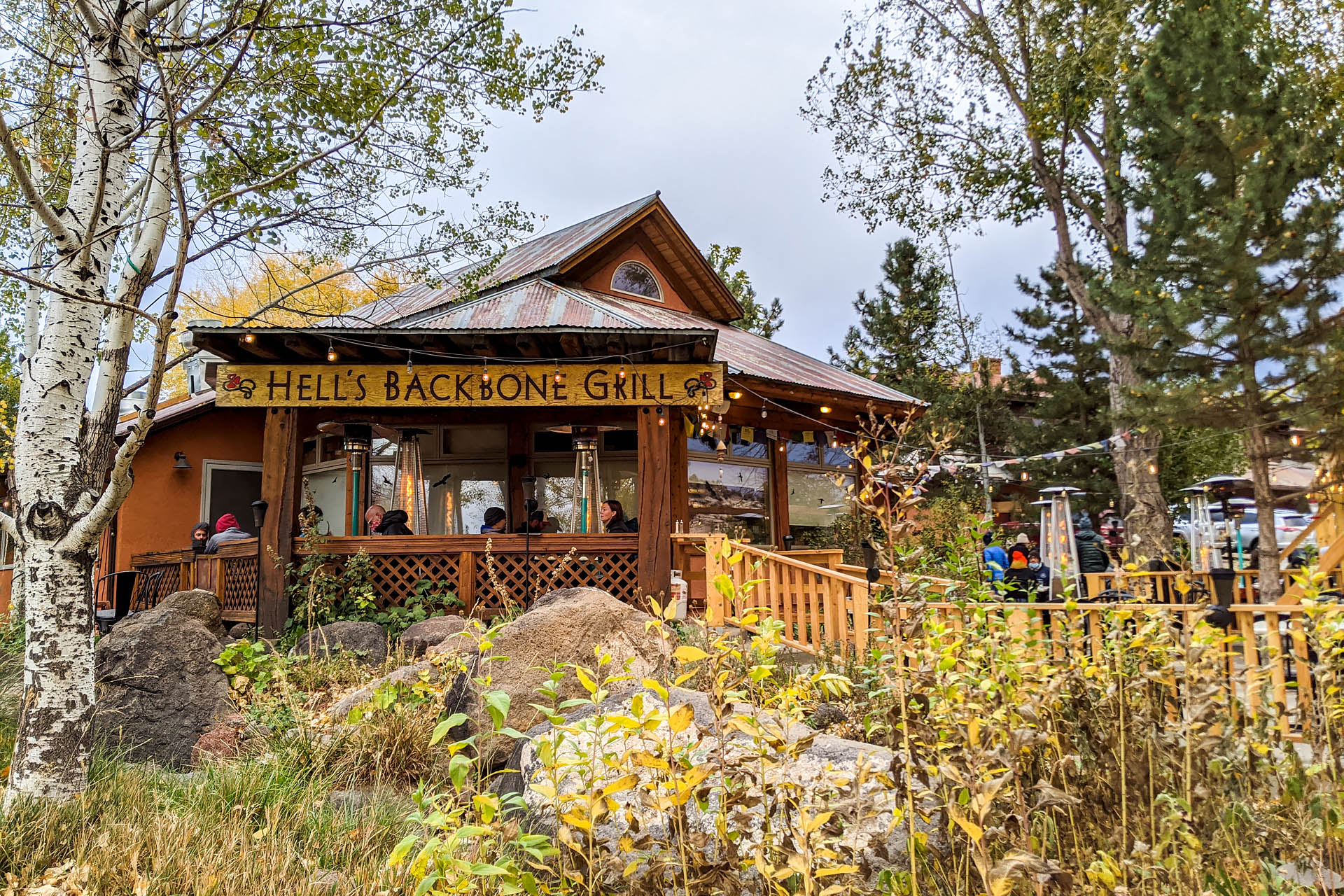 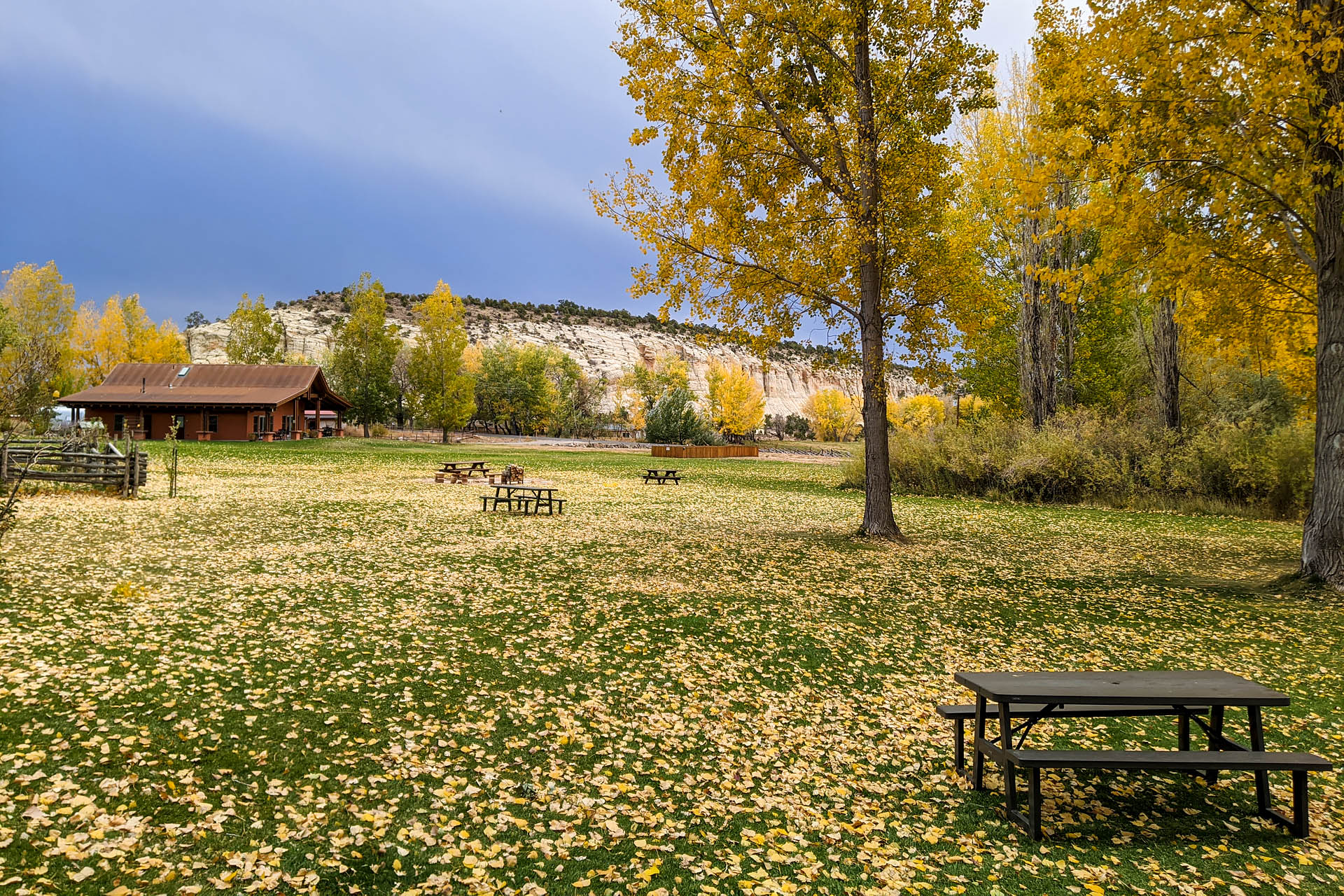 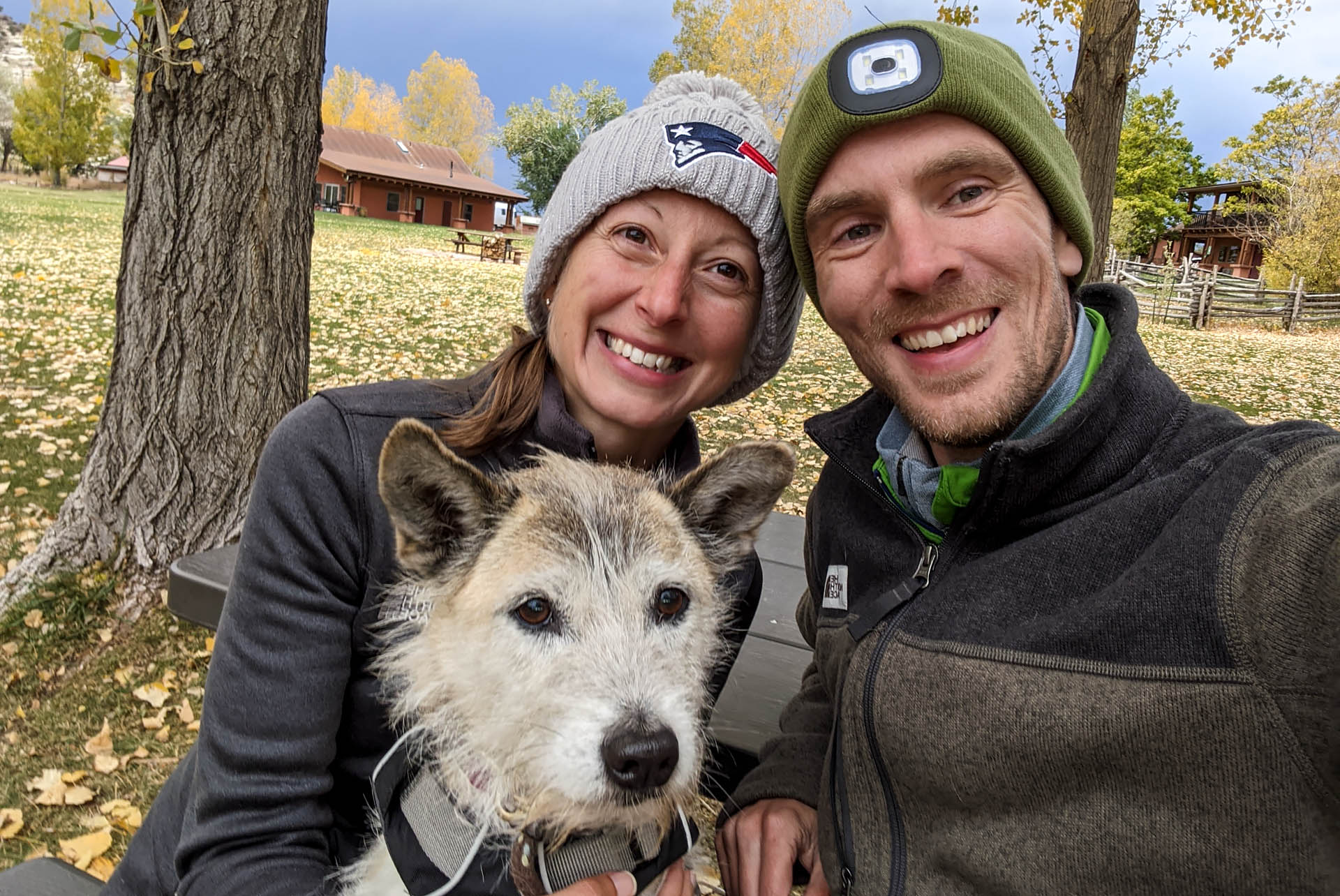 For his meal, Stephan ultimately selected the ‘Jenchilada’ – the chefs’ take on the Mexican dish, made with local beef, cilantro and a chile-tomatillo sauce. With several vegan and vegetarian offerings, I ended up ordering the spice-rubbed tofu with farm veggies. Their tofu was undoubtedly the best I’ve ever tasted. Additionally, both our entrees were served with a cilantro pepita green rice that was out of this world. I’m fairly certain I could have eaten a few pounds. For dessert, we sampled the chocolate chili cream pot, a rich chocolate custard with chimayo chili, and their pear gingerbread with a salted butterscotch sauce. Both were incredibly delicious, and Stephan was pretty much losing his mind over the latter. While we didn’t get to try anything from their extensive cocktail menu, their drinks also sounded amazing. We would have loved to sit down and enjoy a full meal service, but it just wasn’t in the cards with COVID surging. 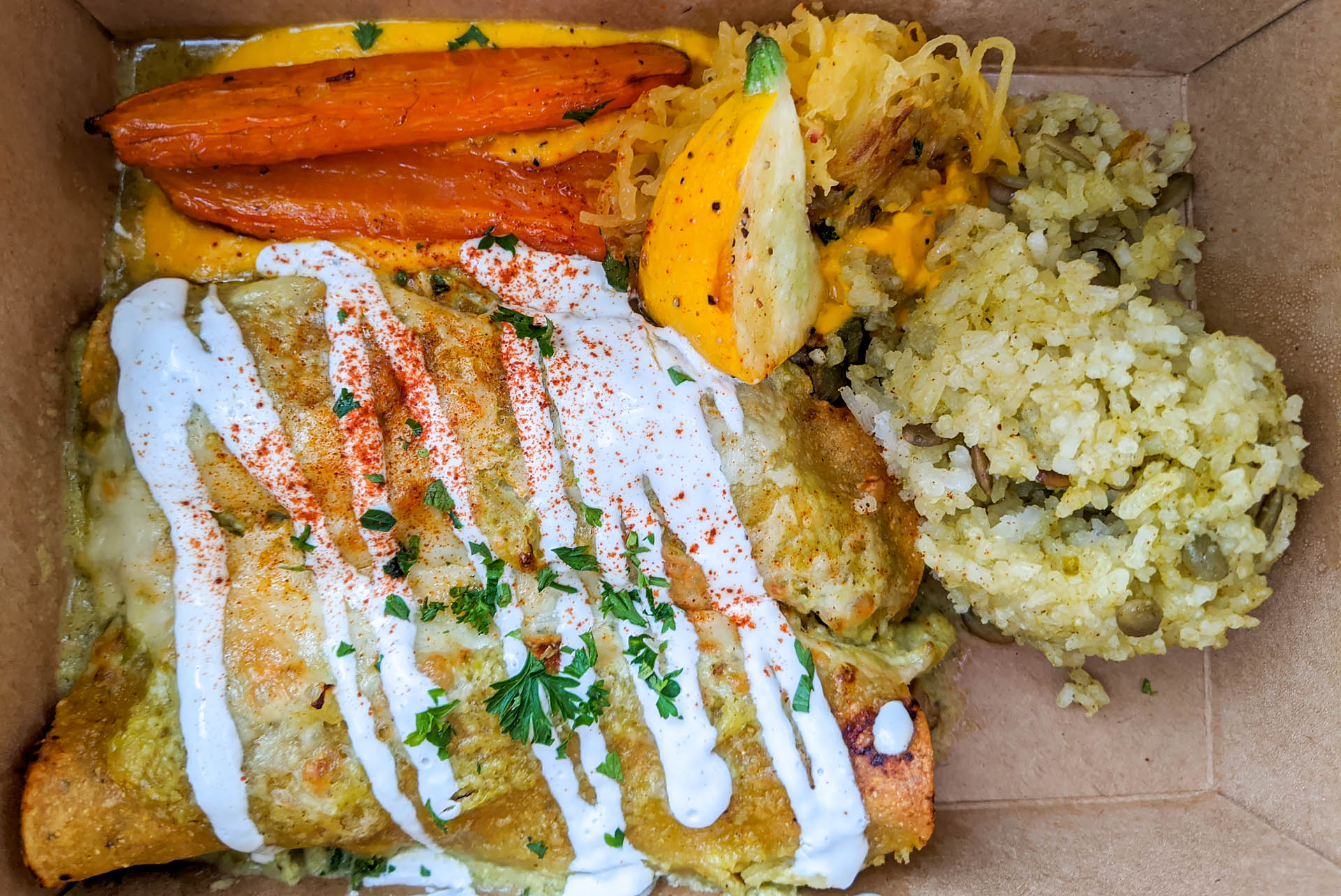 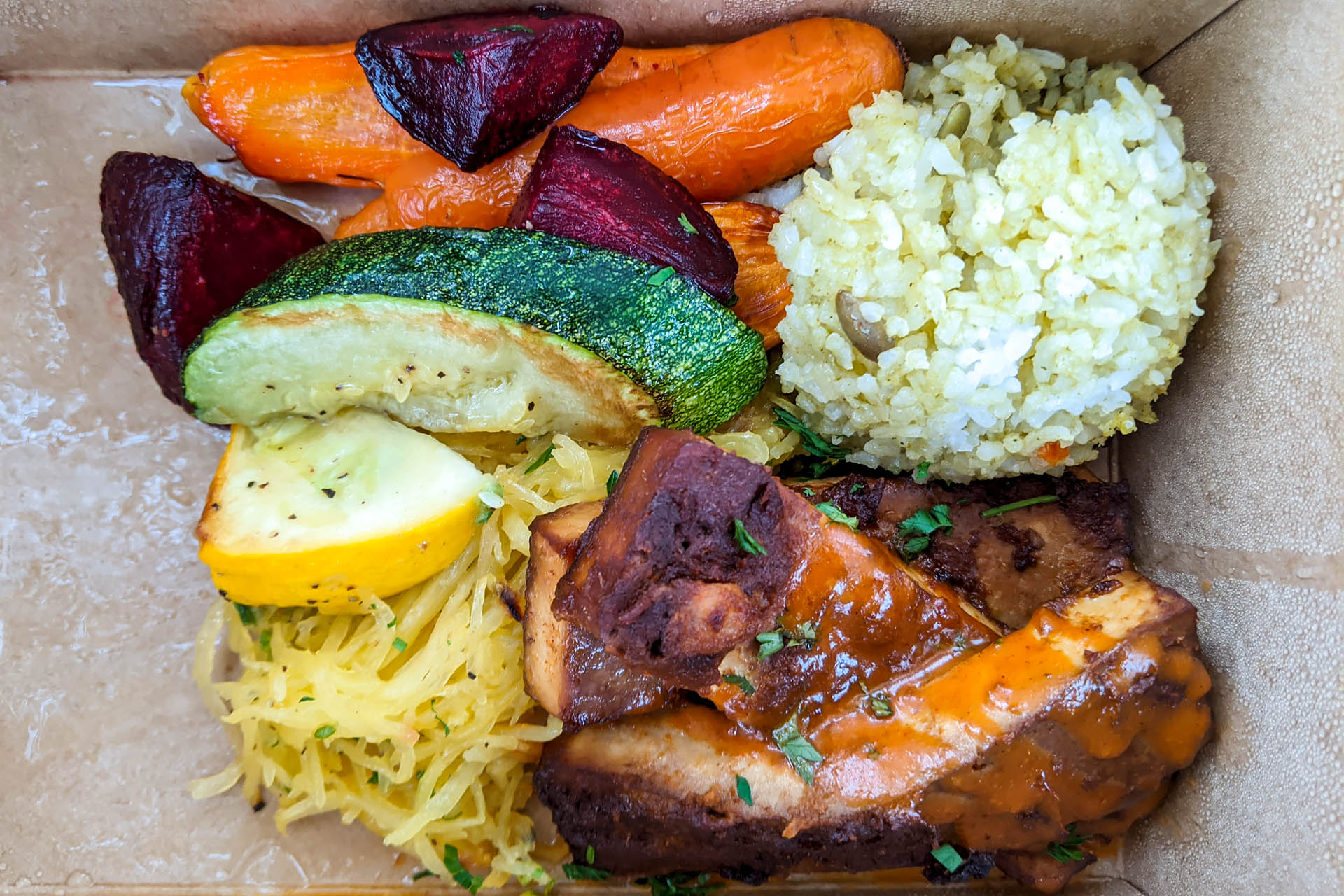 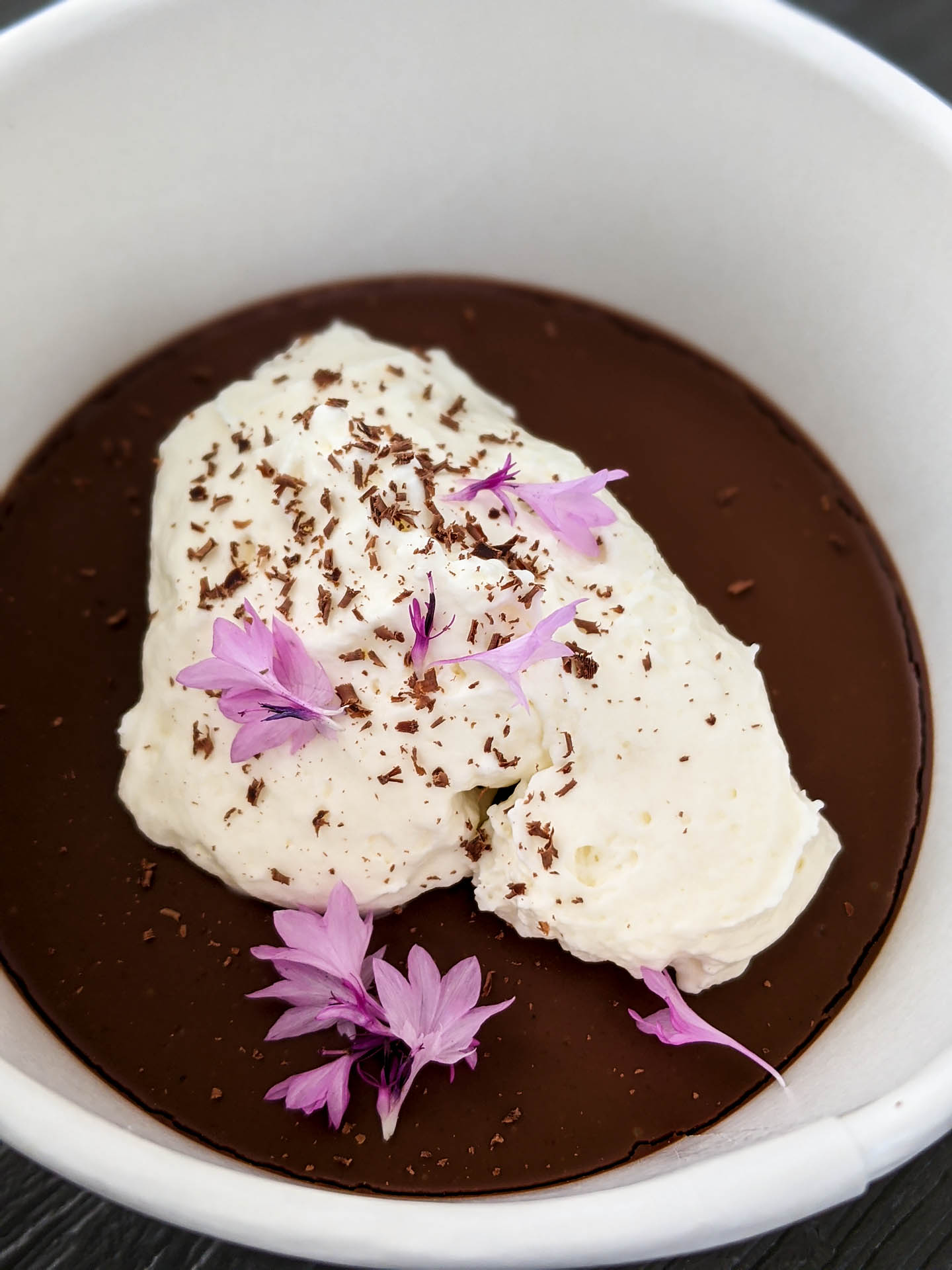 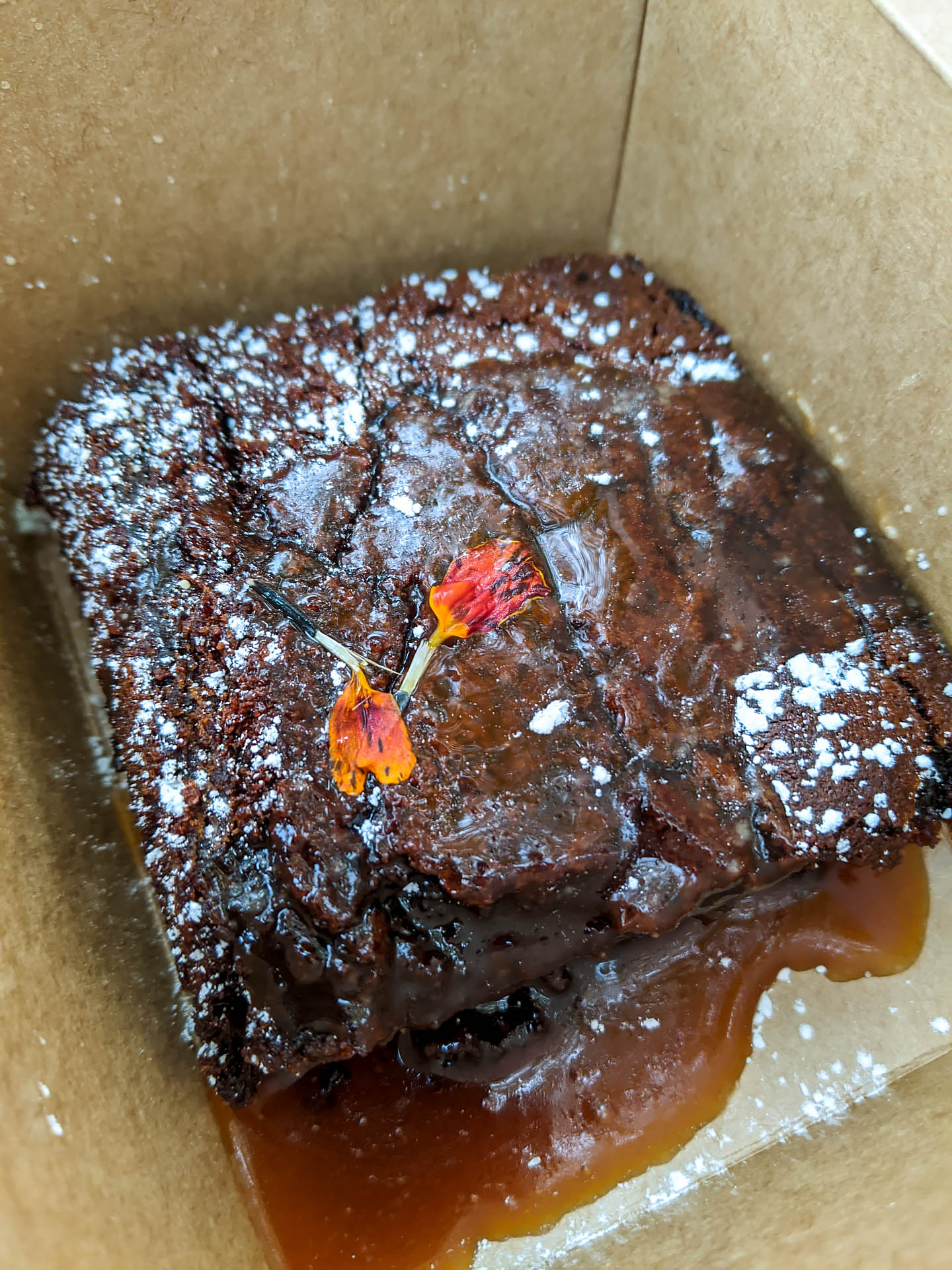 If you make the incredibly wise decision to stop into Hell’s Backbone for a meal, you should also check out their farm shop. They offer a variety of jams, sauces, and butters – made with fresh ingredients from their farm – as well as an assortment of spice blends and dry mixes for replicating baked goods at home. The retail space was closed for pandemic safety when we visited, however we were able to order several items online and pick them up when we stopped for dinner. The small jars made perfect Christmas gifts, and we were happy to be able to further support a local business whose values aligned so closely with our own.

While our quick, 5.5-hour jaunt from Durango ended up spiraling into a 10-hour adventure, we wouldn’t have had it any other way. Taking Highway 24 through Capitol Reef was exceedingly more scenic than sticking to I-70, and Hell’s Backbone was just an incredible dining experience. If you find yourself anywhere near Boulder during Hell’s Background operating season (late spring until October-ish), it really is a must-visit restaurant. The owners’ story is inspiring, their purpose is admirable, and their food certainly speaks for itself.