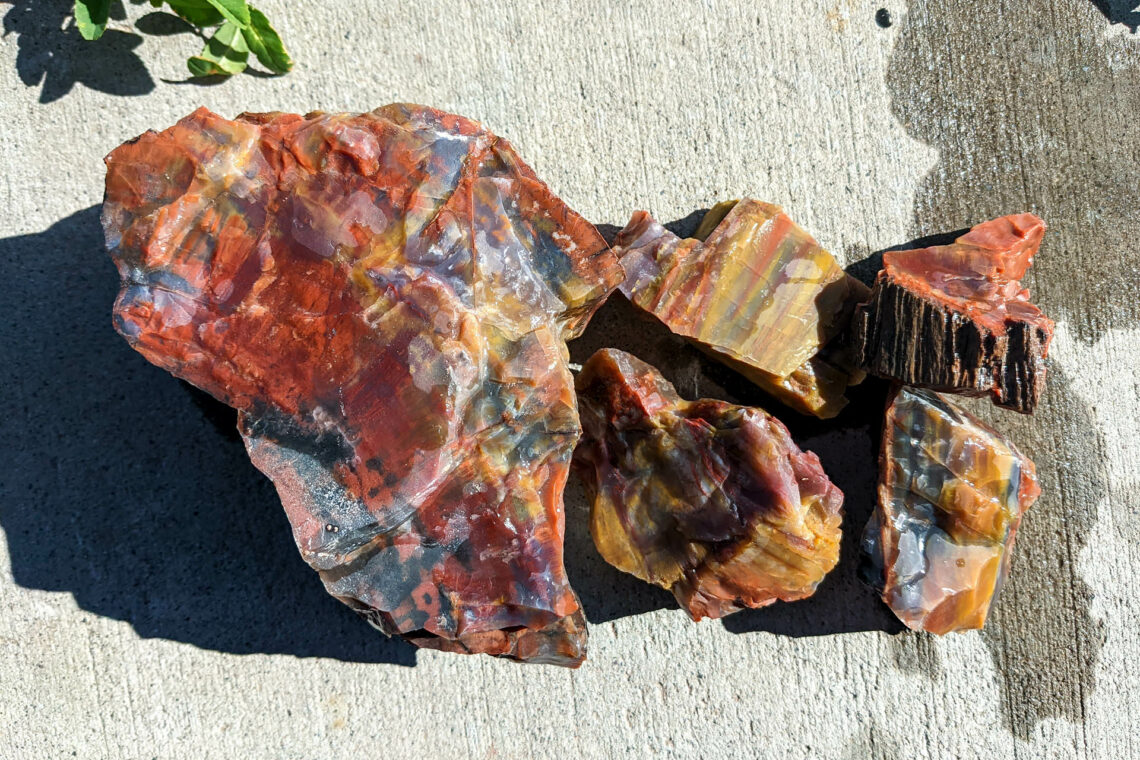 Petrified wood is one of Arizona’s most unique and interesting oddities – fragments of ancient trees that, over the course of millions of years, have turned to stone with the help of the perfect set of geological conditions. In 1988, it was named Arizona’s state fossil, and for good reason – the state’s Petrified Forest National Park boasts one of the largest and most colorful concentrations of petrified wood in the world.

While it’s illegal to take anything from Petrified Forest National Park, there are areas where rock lovers can legally collect a few specimens. In Arizona, petrified wood can be collected on private land (with permission from the landowner, of course), or on BLM land according to current government regulations.

Eager to do a little rockhounding ourselves, we headed to Dobell Ranch – a small, family ranch outside the tiny town of Holbrook, Arizona. Here, the Dobells own forty acres of land that abuts the national park. The isolated piece of property has been in the family since the 1930s, with four generations having worked the land in search of the coveted fossils. Everyone at the ranch is super friendly and laid-back, and we had the most fun rockhounding. We even dug up some pretty spectacular specimens.

How did Arizona’s petrified wood form?

The petrified wood in and around Petrified Forest National Park is part of the Chinle Formation – layers of sediment over 900 feet thick that formed between 200 and 250 million years ago. Researchers have dated the fossilized trees in this area to around 211 to 218 million years old, around the time of the Late Triassic. During this geological period, North America was still part of the supercontinent Pangea, and this part of present-day Arizona was a much different world than it is today. Instead of a barren desert, a river basin rife with towering conifer forests dominated the landscape. As centuries passed, dead or damaged trees fell into the wooded waterways. They quickly became buried under thick layers of silica-rich sediments, away from any oxygen that could accelerate decomposition.

Over the course of millions of years, the combination of silica-rich soil, an anoxic environment, and extreme pressure facilitated the wood’s petrification. The fossils you see today are pieces of trees whose organic materials have been entirely replaced by silica minerals. And while the wood is now solid stone, you can often still make out parts of the tree’s natural structure, such as internal rings, textured bark, and knots along the trunk.

Although the fossilized trees are nearly solid quartz – typically a colorless, translucent crystal – impurities in the mineral can create beautiful colors. Inclusions of iron create deep reds and oranges; cobalt and chromium lead to blues and greens; manganese can result in vibrant orange and purple hues; and carbon can create a jet black color. Because of its colorful hues, the petrified wood in northeastern Arizona is known as ‘rainbow wood’ and is some of the most vivid in the world. 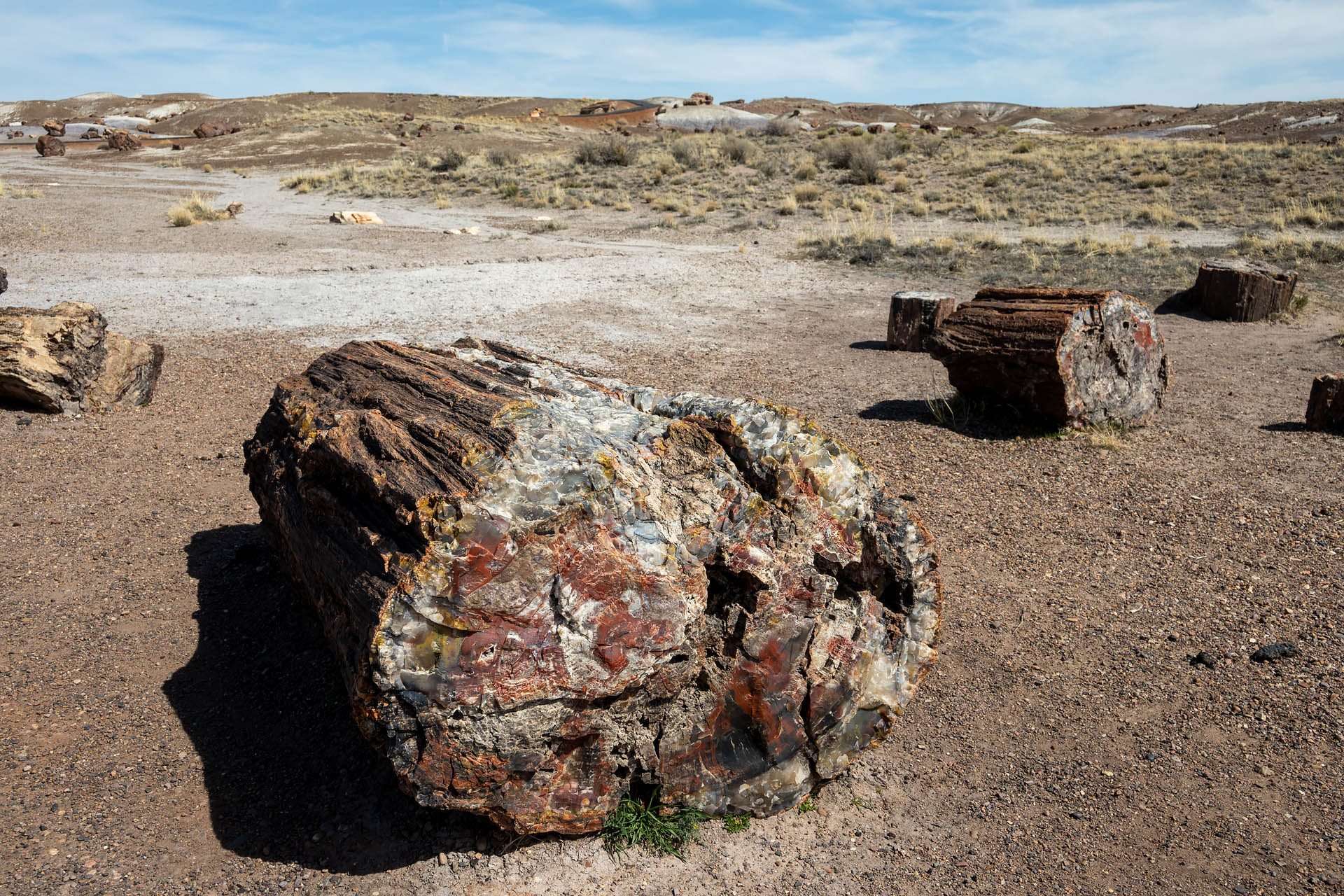 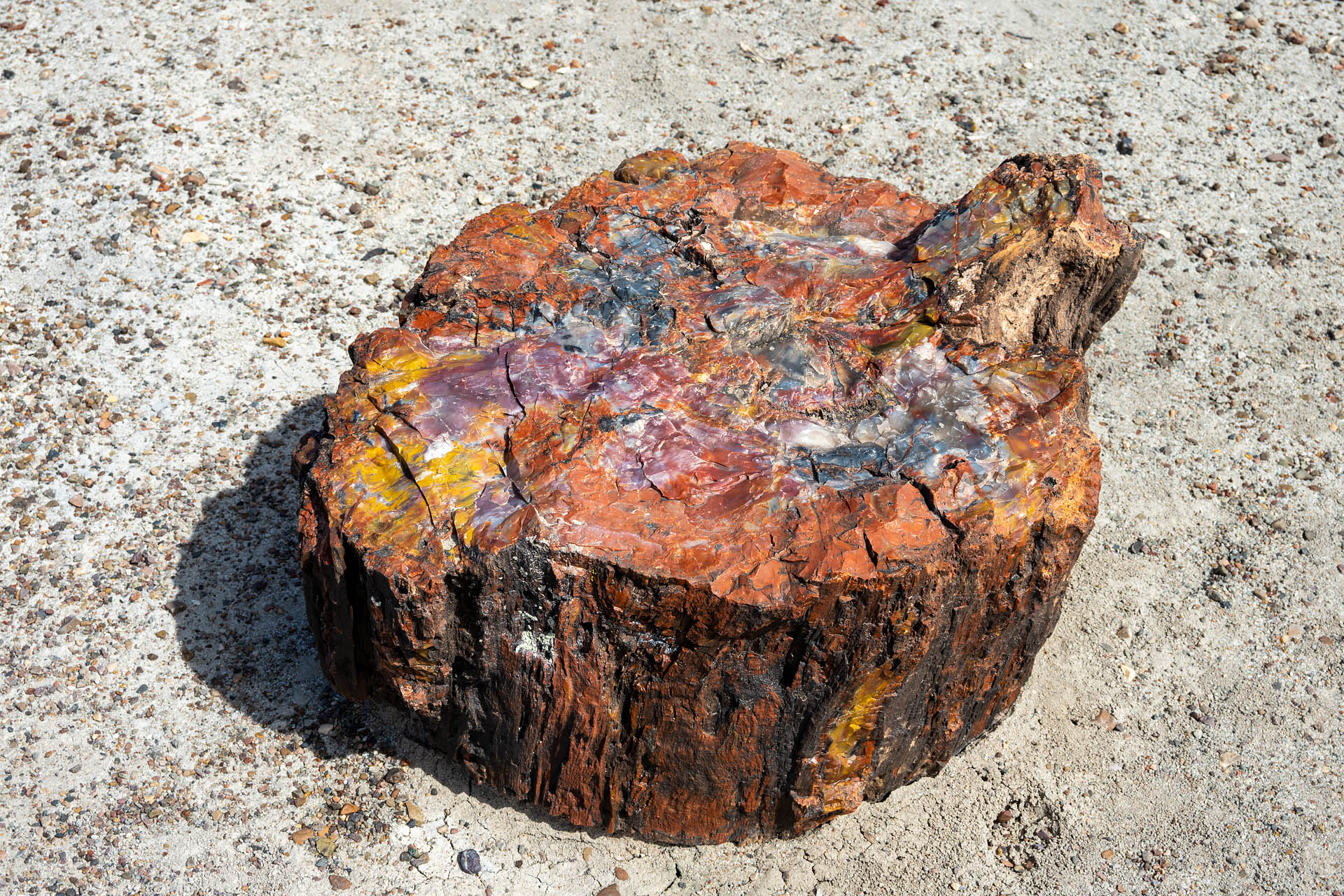 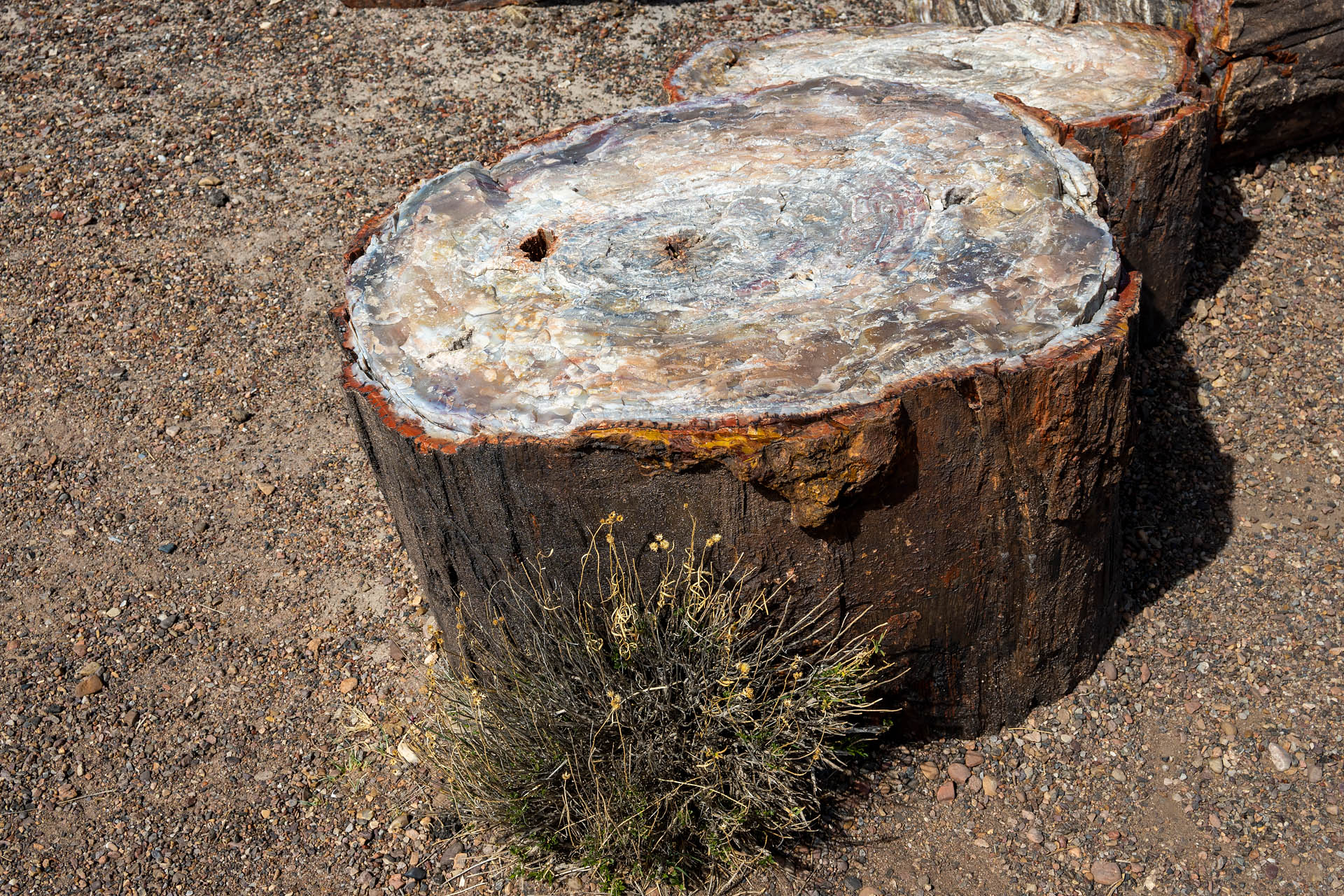 Dobell Ranch is located just outside the small town of Holbrook, about a mile from the entrance to Petrified Forest National Park. The entrance to the property is right off US-180, between mile markers 323 and 324. It’s an inconspicuous little entry, but recognizable by a bright teal house and handful of old cars – beside which stands a sun-faded sign reading Dobell Curios.

The dig site sits about three miles up a narrow dirt road that cuts through flat desert scrub brush – identifiable only by a few clumsily-painted arrows, string of electrical poles lining the primitive track, and the occasional stray cow from the neighbor’s farm. 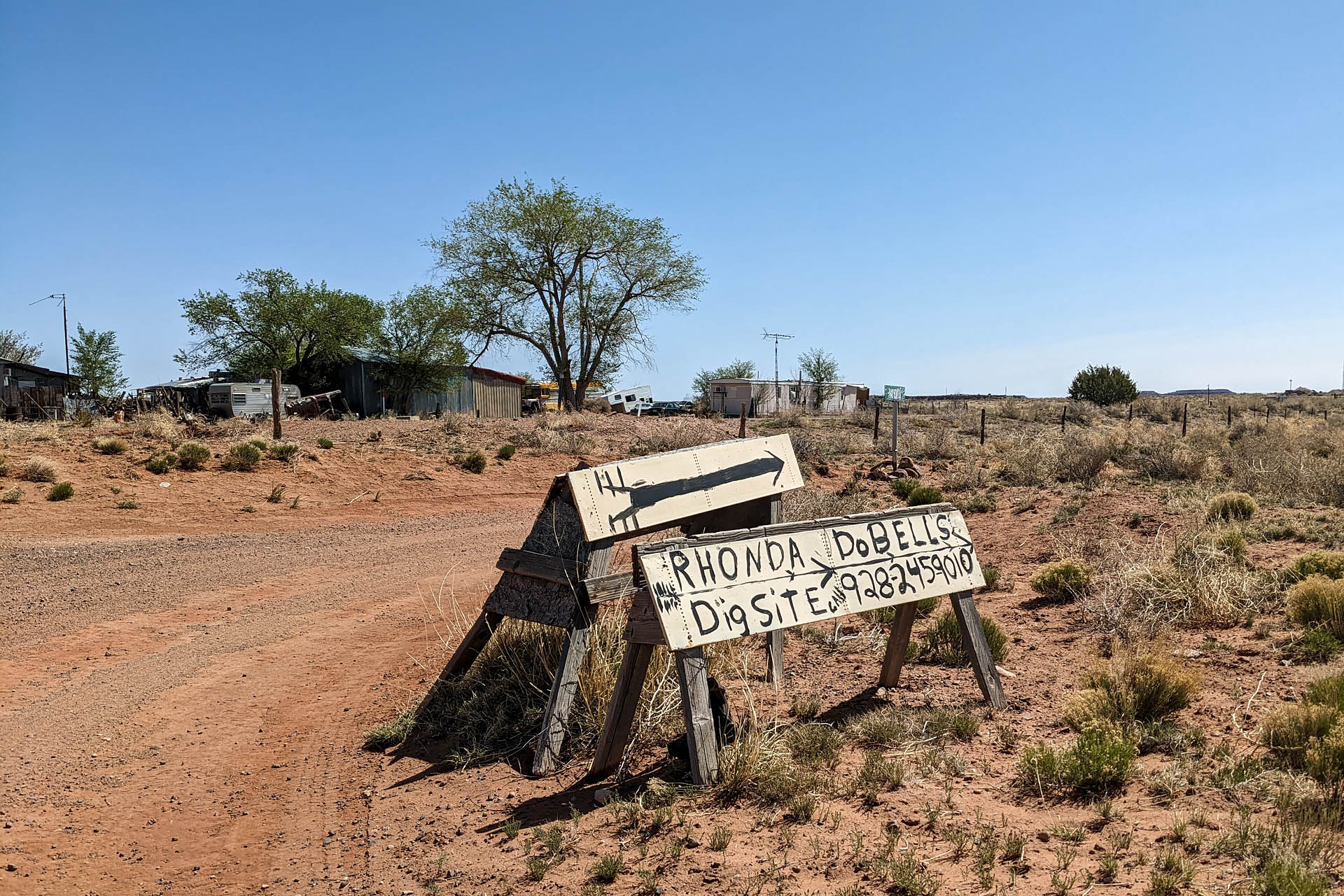 The whole thing is an extremely informal operation. If the family’s up at the dig site, there’s a good chance the gates to the road will be open. If not, a sandwich board at the entrance displays Rhonda’s phone number. You can call and someone will most likely be around to lead you up to the dig site.

Dobell Ranch is a small family business, and the entire crew is extremely nice and welcoming. If you’re interested in simply purchasing a large chunk (or even smaller pieces) of rough wood, you can choose from a number of specimens that have already been dug up by the family members. If you want to hunt for your own, one of the family members will be happy to set you up with a shovel, pickaxe, and five-gallon bucket and point you in the direction of one of the holes.

Frank, Rhonda and their grandchildren work the dig site, and you’re likely to meet any number of them when you visit. During our first visit, we met Rhonda and her three granddaughters – all of whom were super eager to help get us started. The youngest even presented us with her prized pickaxe – an old tractor tooth her cousin had welded to a sledge handle. She proudly showed off his handiwork before instructing us to just whack whatever we find because ‘it’s harder than diamonds’ (a statement of experienced and exuberant youth that’s slightly truth-adjacent). 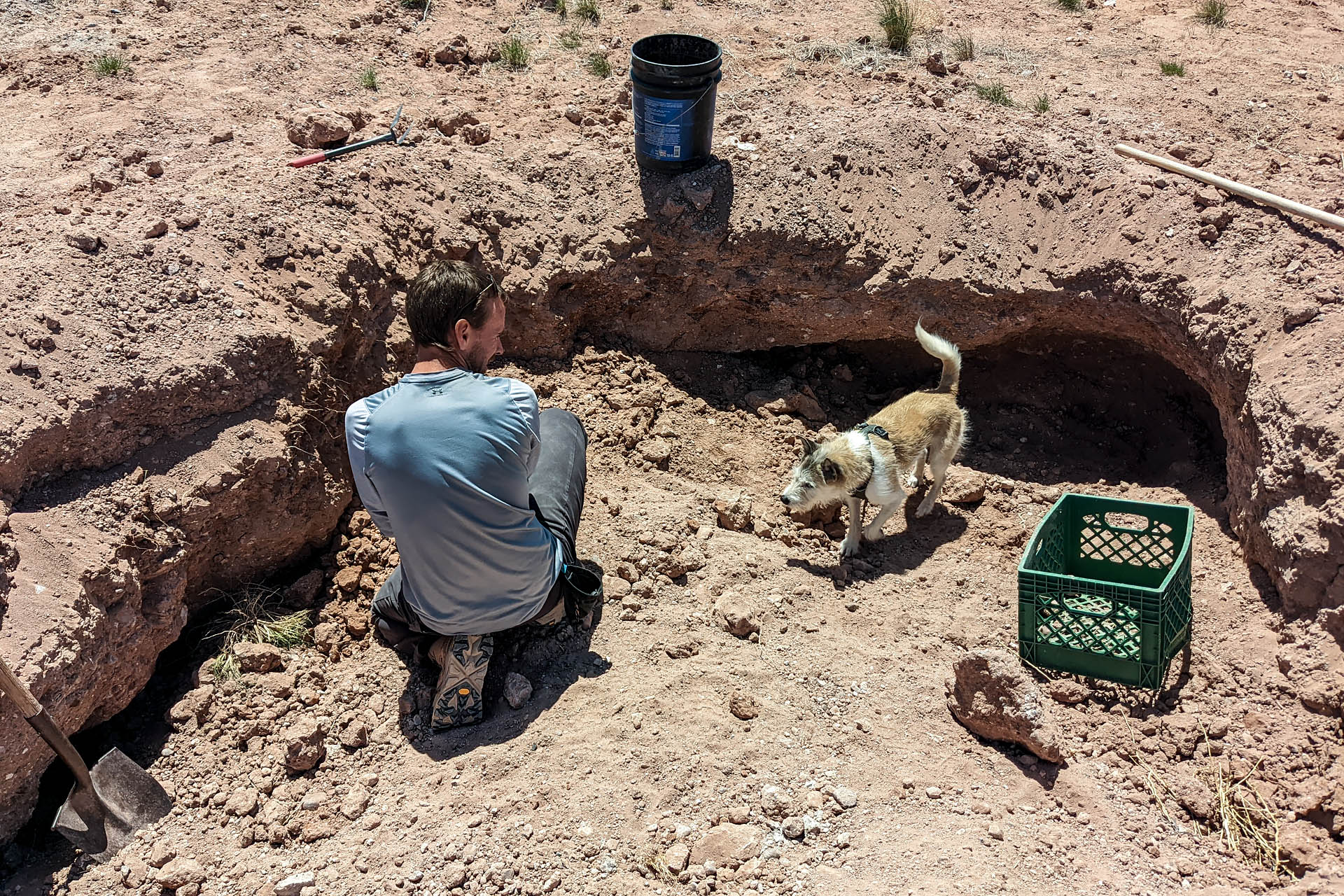 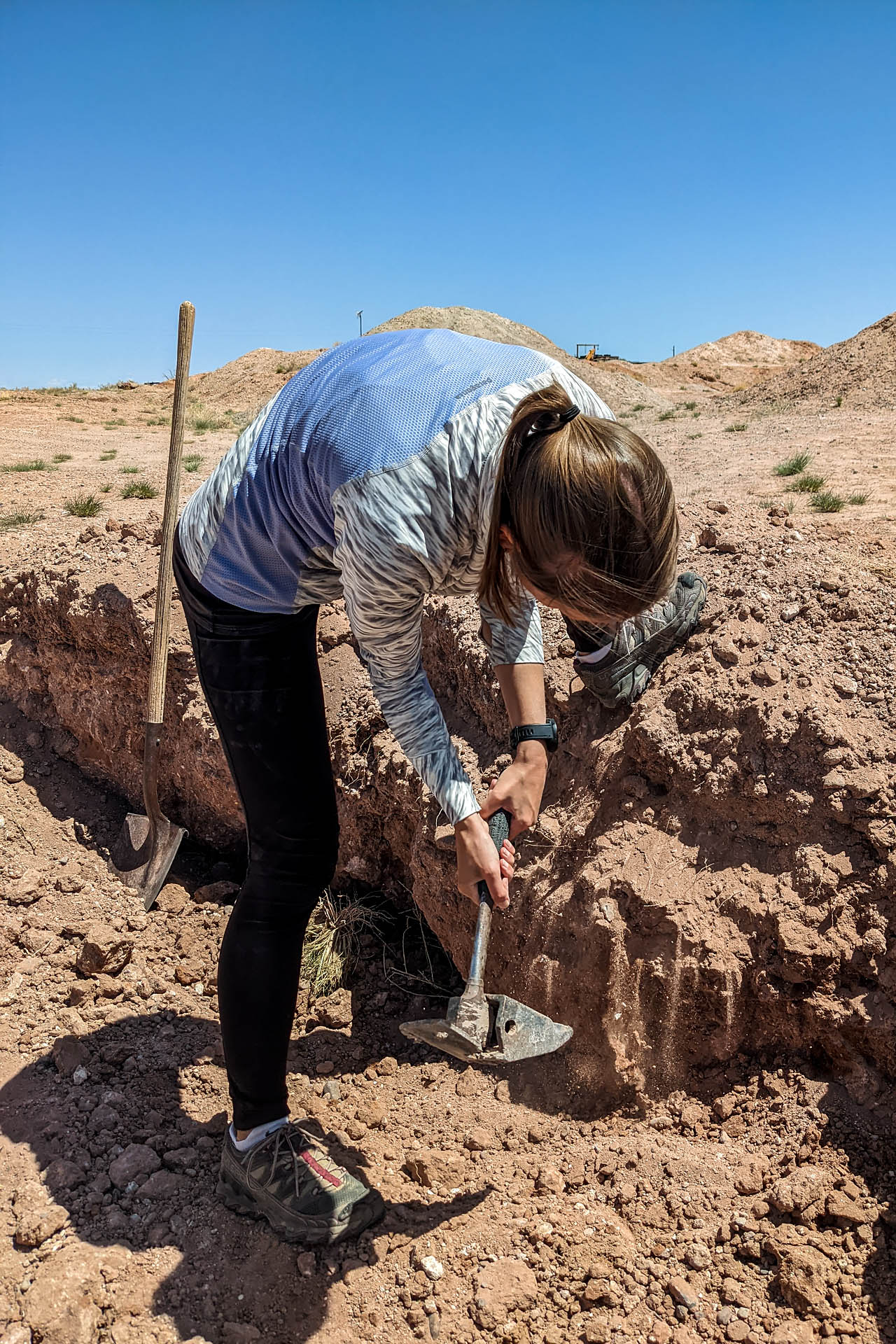 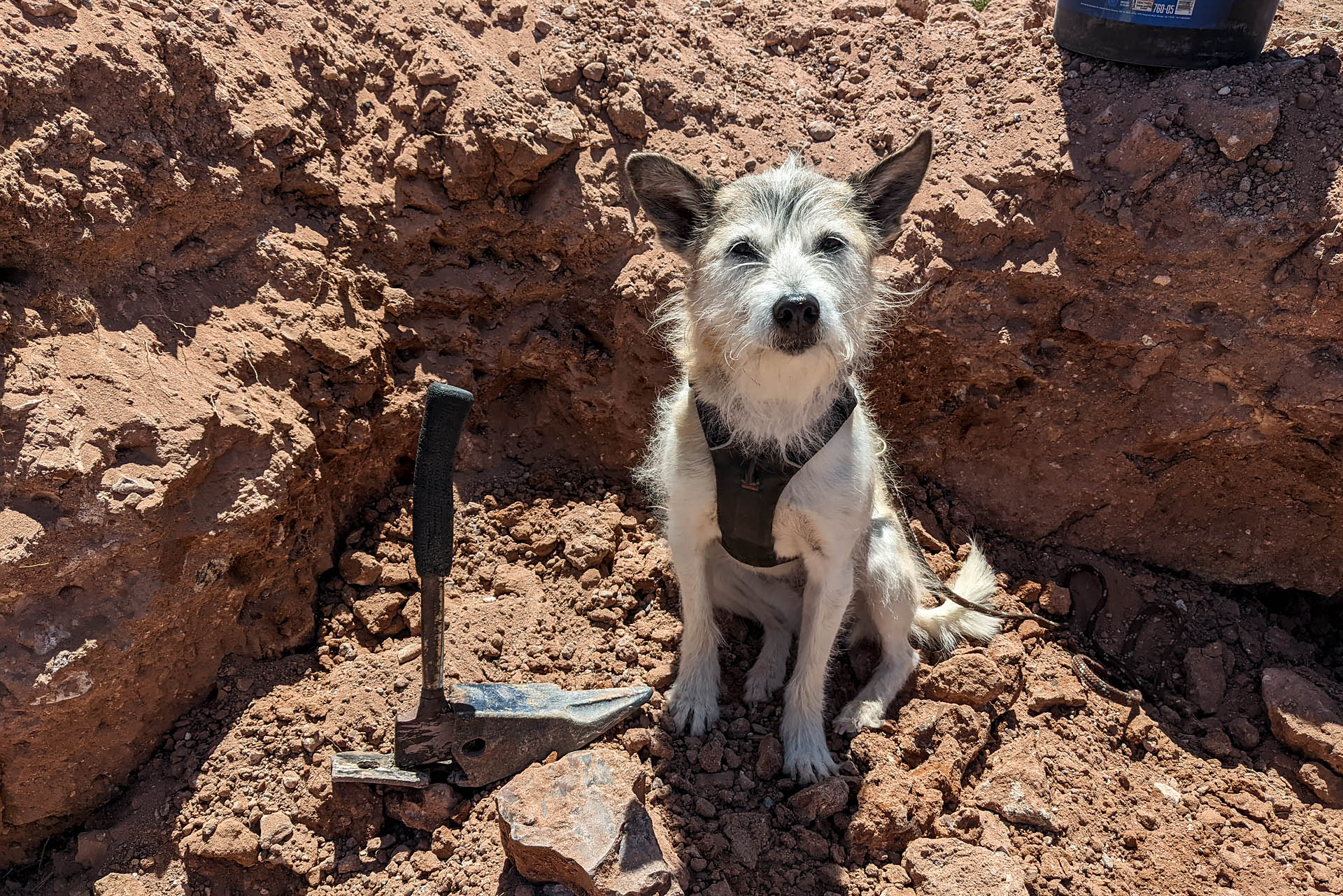 A full, five-gallon buckets costs $45. Any less than that is just eyeballed based on how full your bucket is. You can stay and dig as long as you want. We ended up visiting twice because we were just so obsessed, and spent at least a couple hours excavating each time. The second time we visited, not even 50 mph winds and lashing sand could shorten our stay. By the time we finished, we had sand in places we didn’t know it could accumulate, including a disgusting, dirty film on my teeth I discovered when I paused to eat my lunch. 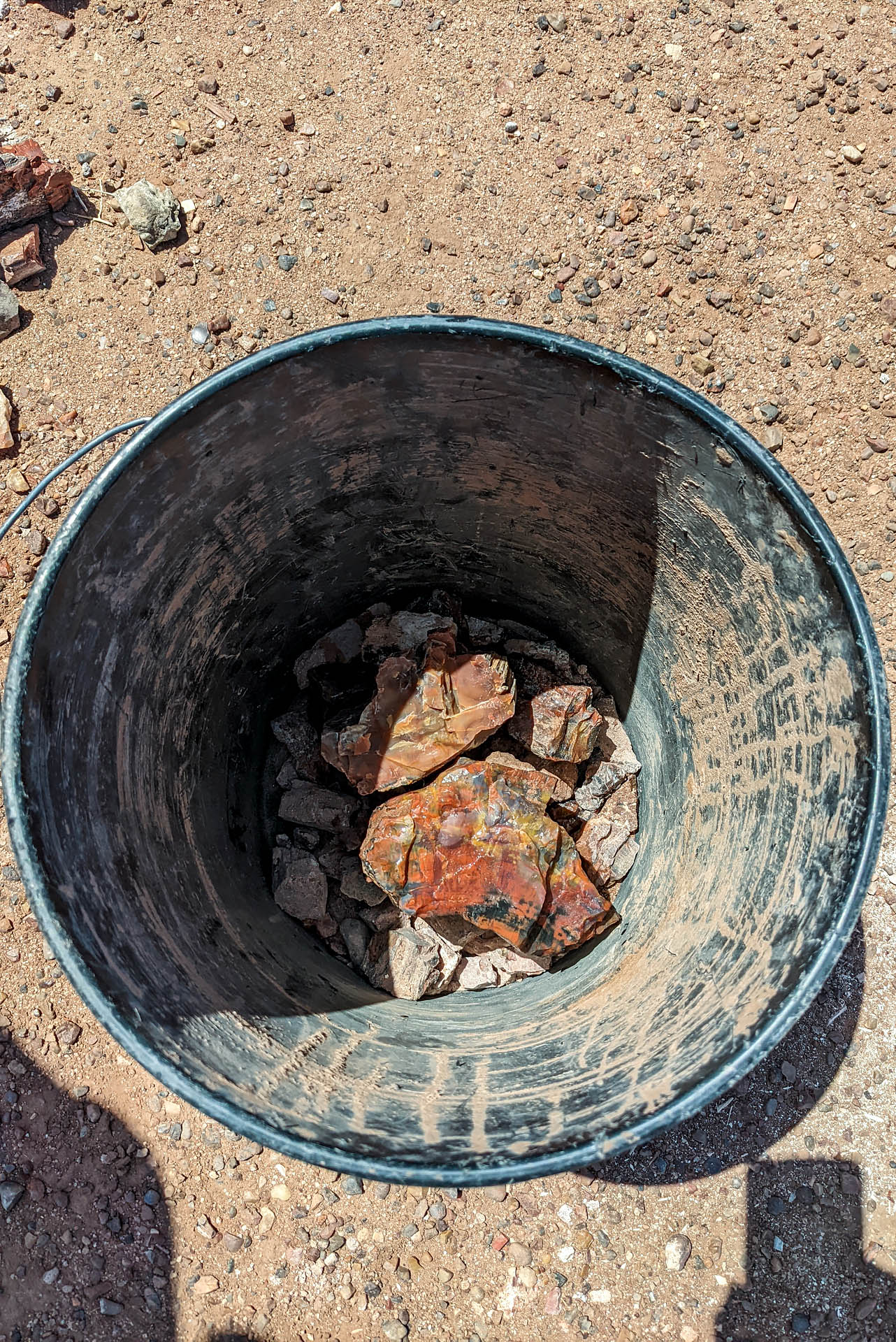 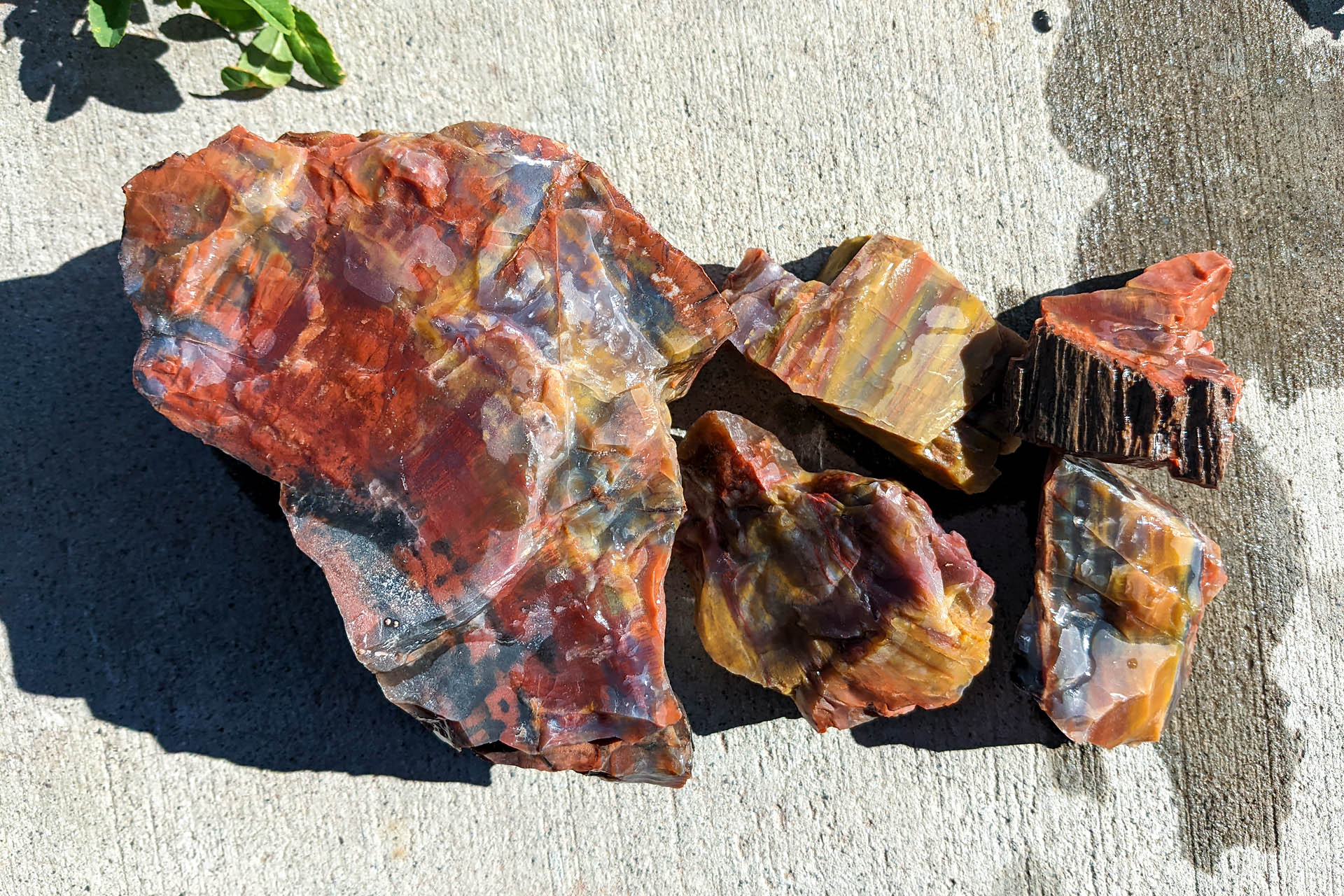 If you have the time and enthusiasm, we highly recommend digging for your own specimens. Not only does it give you a greater appreciation for all of the labor that goes into obtaining the fossils, but it is ridiculously fun if you’re a geology nerd. When I was growing up in New Hampshire, my two best friends and I spent an embarrassing amount of our childhood tirelessly banging away at granite boulders with our dads’ hammers and chisels, convinced we were going to unearth some magnificent, crystalline geode. I can’t imagine how much time we would have spent digging up a piece of land like this where we could actually find something.

While digging up treasures with a pickaxe turned out to be particularly satisfying, the most fun part was washing off our samples after we’d finished collecting. When chiseling away at the sandy soil, most pieces of petrified wood are identifiable by the faint reddish color and faintly woody texture that peek through a thin crust of sediment. Other than that, the pieces just look like dirty rocks. However, with just a few seconds of agitation in some water, you can suddenly reveal a rainbow of hues. The anticipation and excitement with which we washed each piece felt like opening a bunch of little Christmas gifts, and was the embodiment of the old adage to never judge a book by its cover.

Even Sanchez had a fun time at the ranch. Clearly a dog-lover herself, Rhonda was so excited to befriend our scruffy little mutt. She welcomed Sanchez with opened arms, and quickly invited her to help us dig. I mean, what could be better for a curious dog than walking onto a forty-acre property where someone points you to hole and encourages you to go nuts and tear it up? Sanchez is a huge fan of digging in the dirt, and we were so happy she could help us in our hunt.

If you find yourself headed to Petrified Forest National Park, neighboring Dobell Ranch was such a fun place to visit. To sufficiently explore the park and spend some time rockhounding at the ranch, we’d recommend a weekend trip. Some of our thoughts and tips on visiting the Petrified Forest can be found here. And if you happen to pass through the Painted Desert side of the park, you can even spot the rusted-out frame of a 1932 Studebaker that marks a section of Historic Route 66 – a relic donated to the park by the Dobell family.

Know before you go: If you do decide to visit the national park after rockhounding at Dobell Ranch, make sure to get a receipt for your finds (the family will ask if you’d like one when you pay for your treasures). Because it’s illegal to take anything from the national park, you’ll need evidence that your rough rock was collected elsewhere. Supposedly, the ranger at the entrance will ask if you are transporting any petrified wood and mark all pieces with a temporary marker. While we weren’t asked if we were carrying any, we made a point to let the ranger know we had some in the car and showed our receipt just in case.