After researching our options for traveling to Luang Prabang, Laos, we finally settled on the slow boat. Spending two days floating down the Mekong River in a large, wooden ferry has long been a staple of the backpackers’ journey through southeast Asia, and it seemed like an appealing alternative to the questionable regional airlines, or 16 hours crammed in a bus.

We hopped on a local bus from Chiang Rai to the Thai border (Chiang Khong) and met a nice guy named Martín, who had been hitchhiking throughout Thailand on a shoestring budget. It was little surprise, then, that when the bus dumped us off several kilometers from the border, with tuk tuk drivers gleefully quoting wildly-inflated costs to their trapped prey, he shrugged and said he was going to hitch. Always up for a new adventure, we all struck off on foot together, sweating in the 100+ degree sun under the weight of our packs.

Initially, it looked a tad bleak since the road to immigration had no outlet, and therefore little traffic. After a while, though, a nice lady in a tiny Honda looked at the three people, each carrying two large backpacks, and decided we could probably all fit. We didn’t hesitate, scrambling quickly in, thanking her profusely and enjoying our air conditioned ride to the border. After a quick trip through the empty passport control/immigration offices and a short bus ride over the Friendship Bridge, we again found ourselves in front of salivating tuk tuk drivers, informing us that there was nothing between us and our destination but 16 km of hot road. Martín announced that we had been lucky once already, so we may as well try again. He was right: after only a little walking, we caught a couple of rides and found ourselves deposited in Houay Xai, where we found some accommodation and basked in a sunset over the Mekong while we ate dinner, awaiting the next morning’s slow boat. 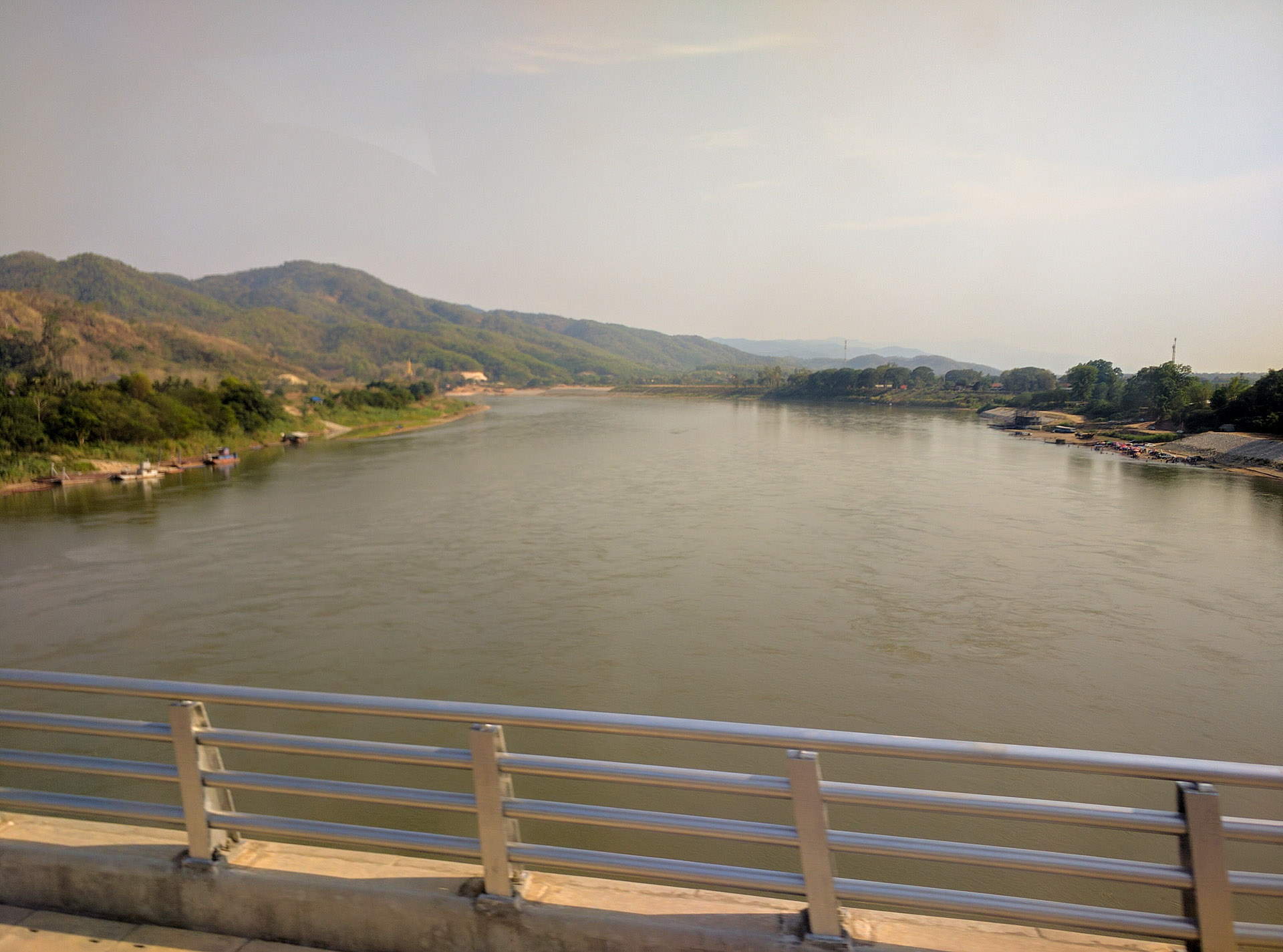 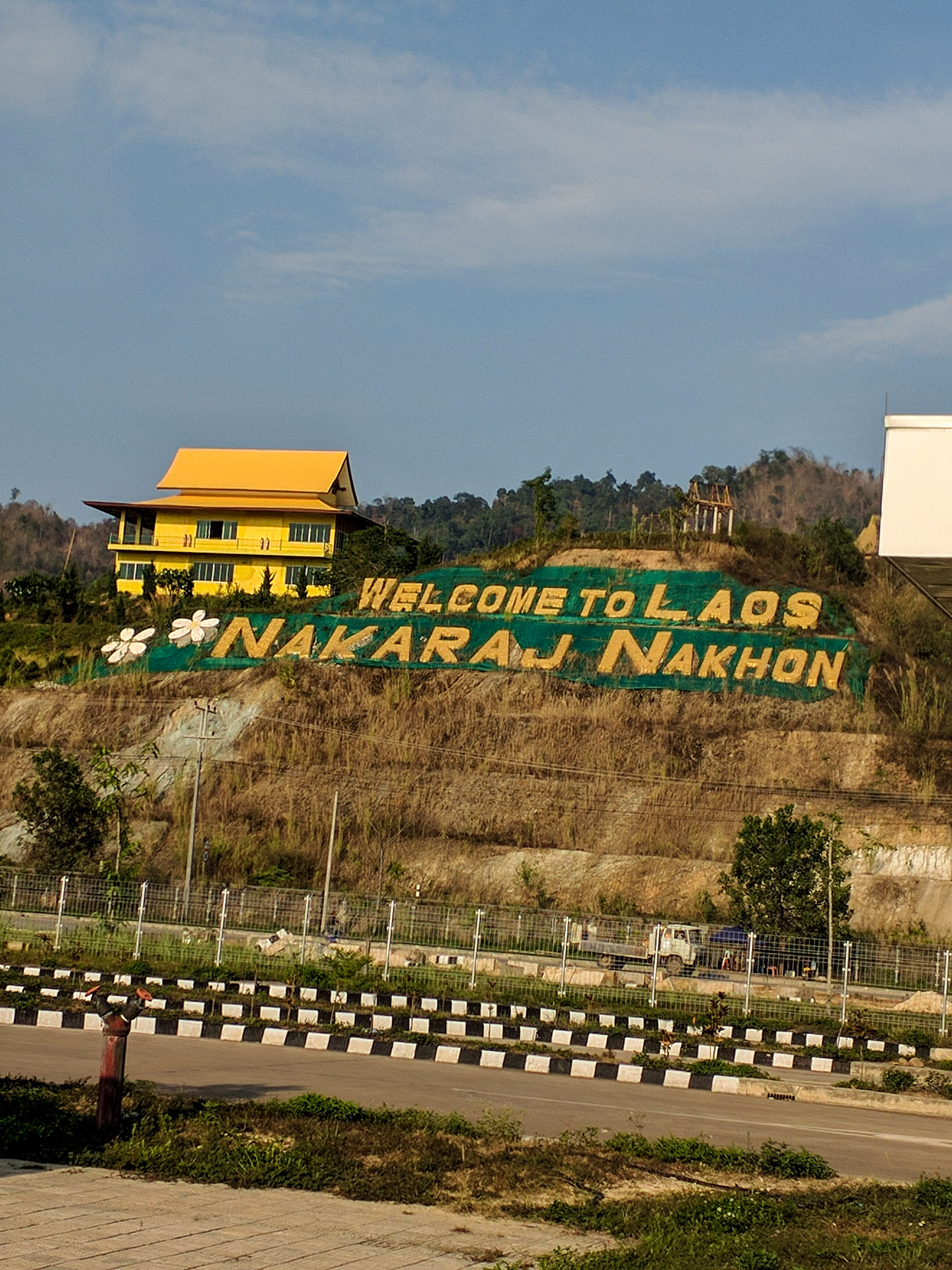 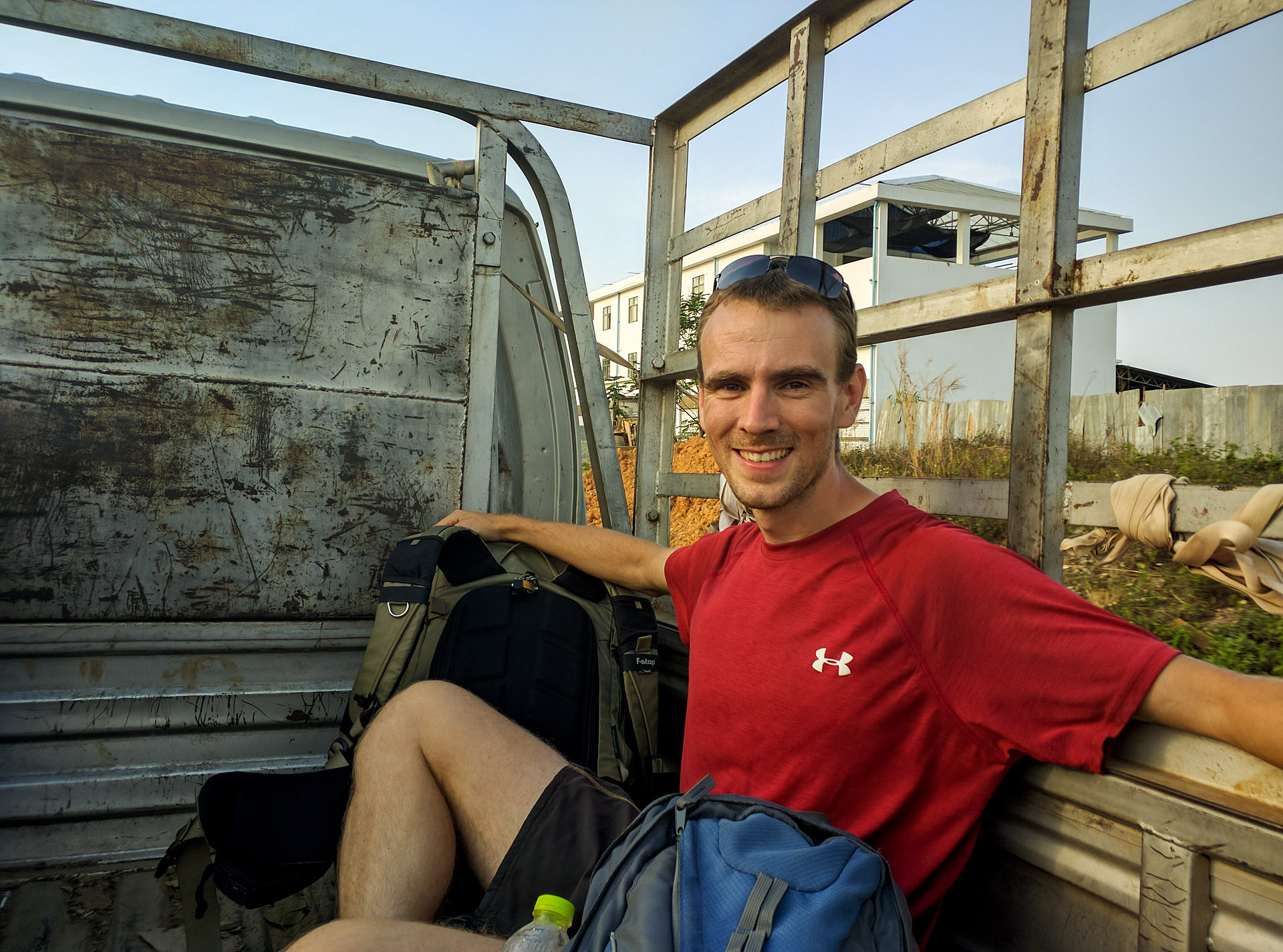 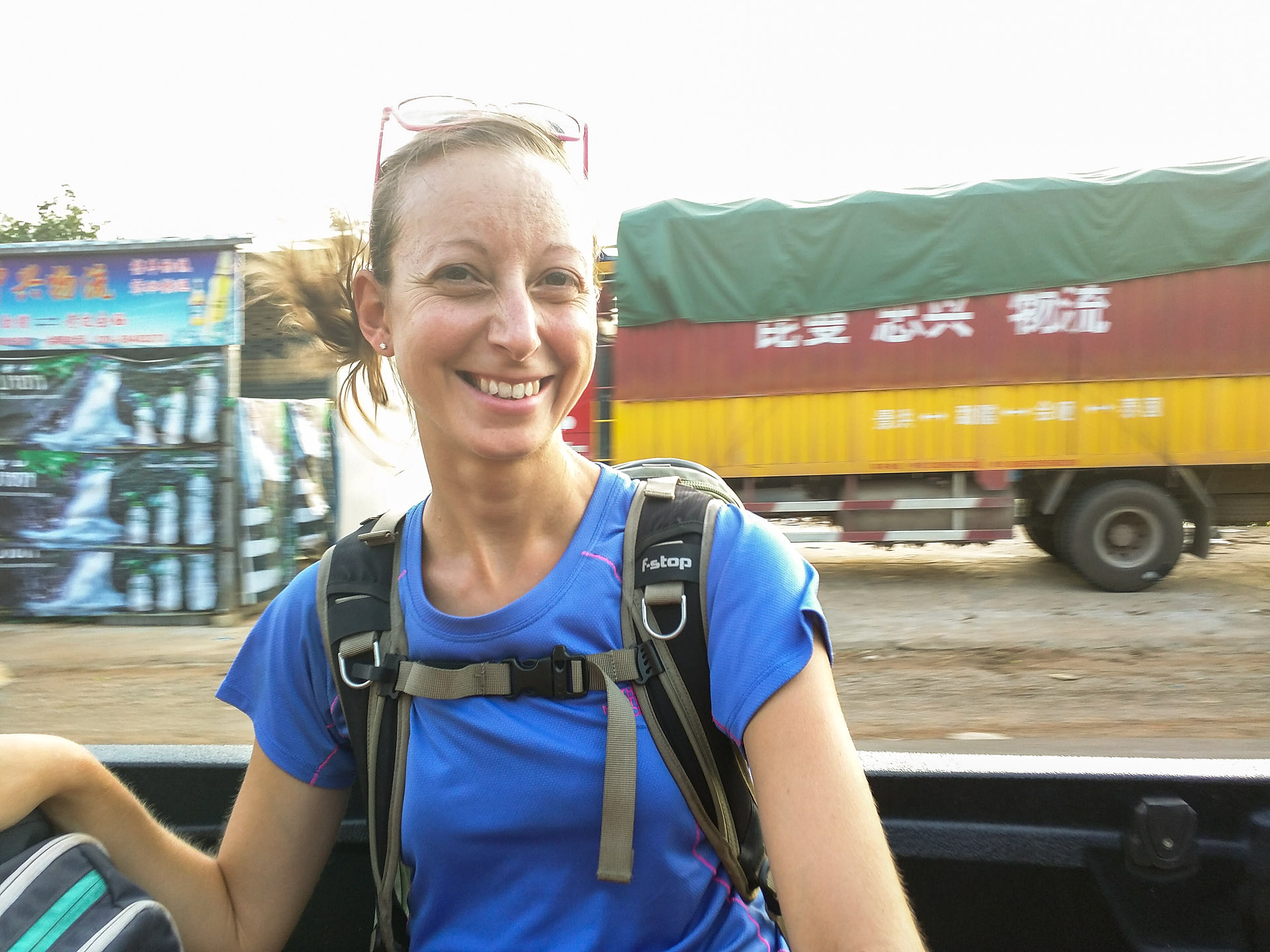 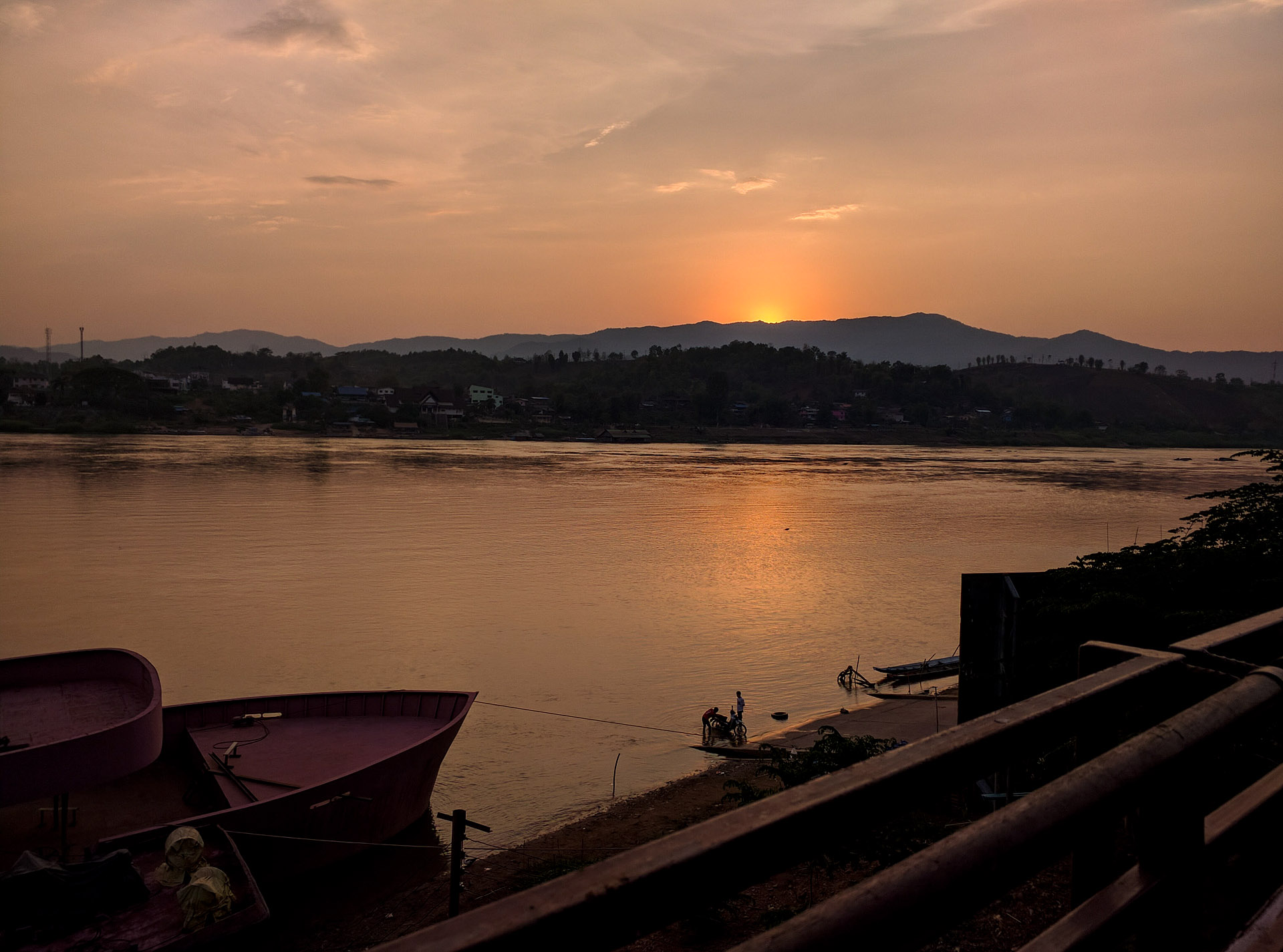 We arrived at the pier the next morning, bought our tickets and got settled in our seats. The mismatched cloth seats, torn from out-of-service buses and bolted to wooden slats, were unattached to the boat floor, ensuring that early arrivals could finagle a few extra inches of legroom. After the boat filled, a man got on and gave us what, apparently, passed for a safety lecture and mainly consisted of helpful tips like “don’t climb on the roof” and “don’t sit on the edge.” He also let everyone know that sometimes there’s not enough accommodation when we stop for the night, and some of the places are not so safe, but if we were at all concerned, he just happened to run a nice, safe guesthouse where we could purchase a room – only a few available – sight-unseen and non-refundable. Needless to say, we immediately dismissed this option.

Eventually, we started off down the Mekong. The 12th longest river in the world, the Mekong is over 2,700 miles in length, beginning at the Tibetan Plateau and eventually emptying into the South China Sea at the tip of Vietnam. The river is hugely important to the surrounding ecosystems, with a biodiversity second only to the Amazon – over 23,000 species of plants, animals and fish are found along its length. It’s also critical for the food, water and livelihood of the people living in the area, supplying nearly 4.5 million tons of fish every year, and providing a critical trade and transportation route through a region where roads are not always accessible or safe.

As we cruised down the river, we made occasional stops at local villages, sometimes taking on a few passengers, and often receiving packages or shipments destined for other villages. Frequently, we’d laugh as we watched shrieking children splashing in the shallow waters, cooling off in the midday heat and pausing in their antics only to shout greetings and wave enthusiastically at the passing boats. Unfortunately, the lack of infrastructure also means there is no effective way to remove garbage, and the riverbanks are occasionally decorated with village dumping grounds, often extending down into the river itself, with plastic bottles bobbing in the currents. As this is also the burning season, we were often passing charred and burnt fields, some still aflame and giving off a thick plumes of black smoke. This all made for rather disjointed scenery – one moment we were passing a beautiful village of bamboo houses perched on a hillside, or craggy rocks along which the water buffalo lazily cooled off on the muddy embankment, and in the next we’d be inhaling a lungful of thick smoke as we slipped past a blackened hillside bordered with several years’ accumulated trash. 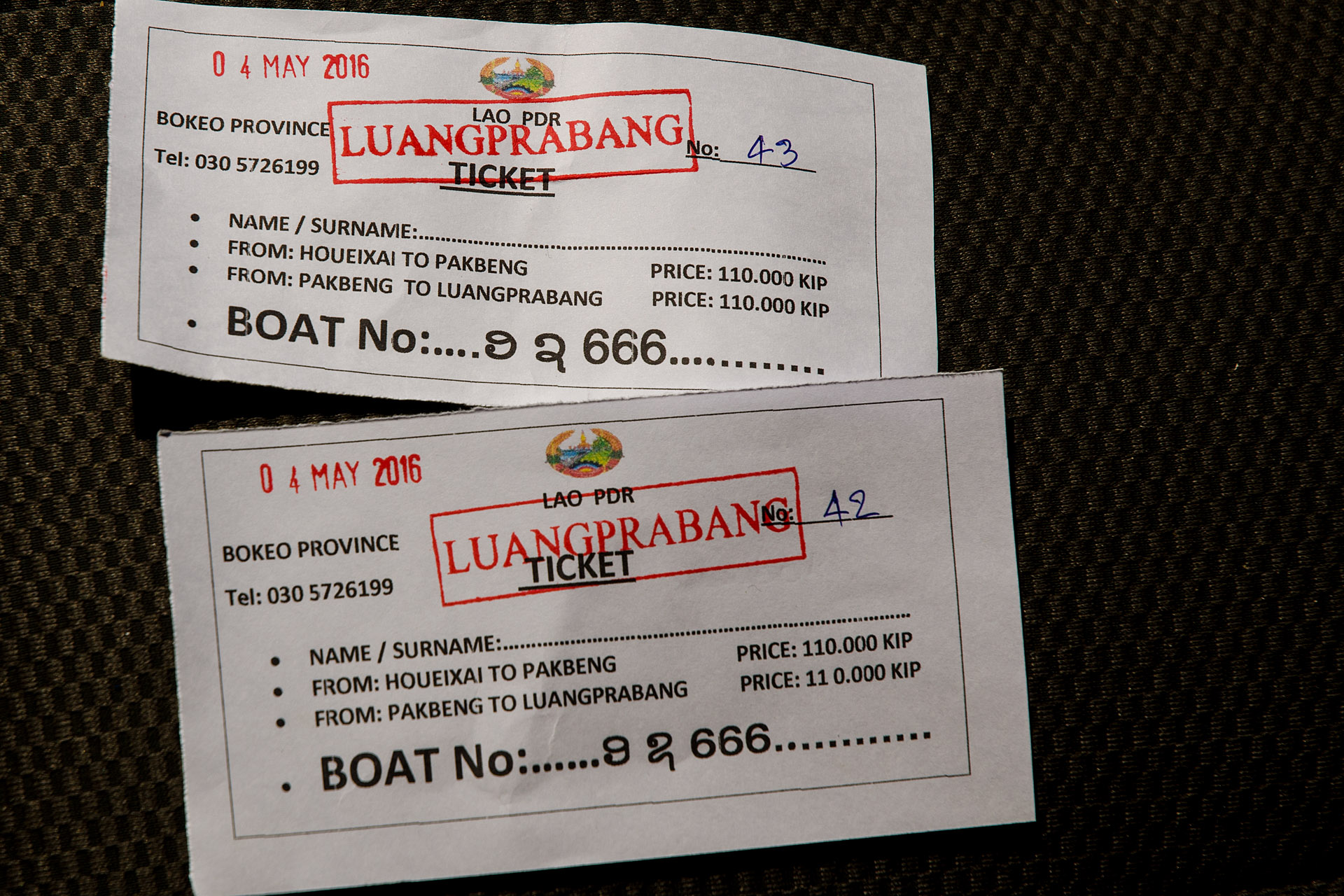 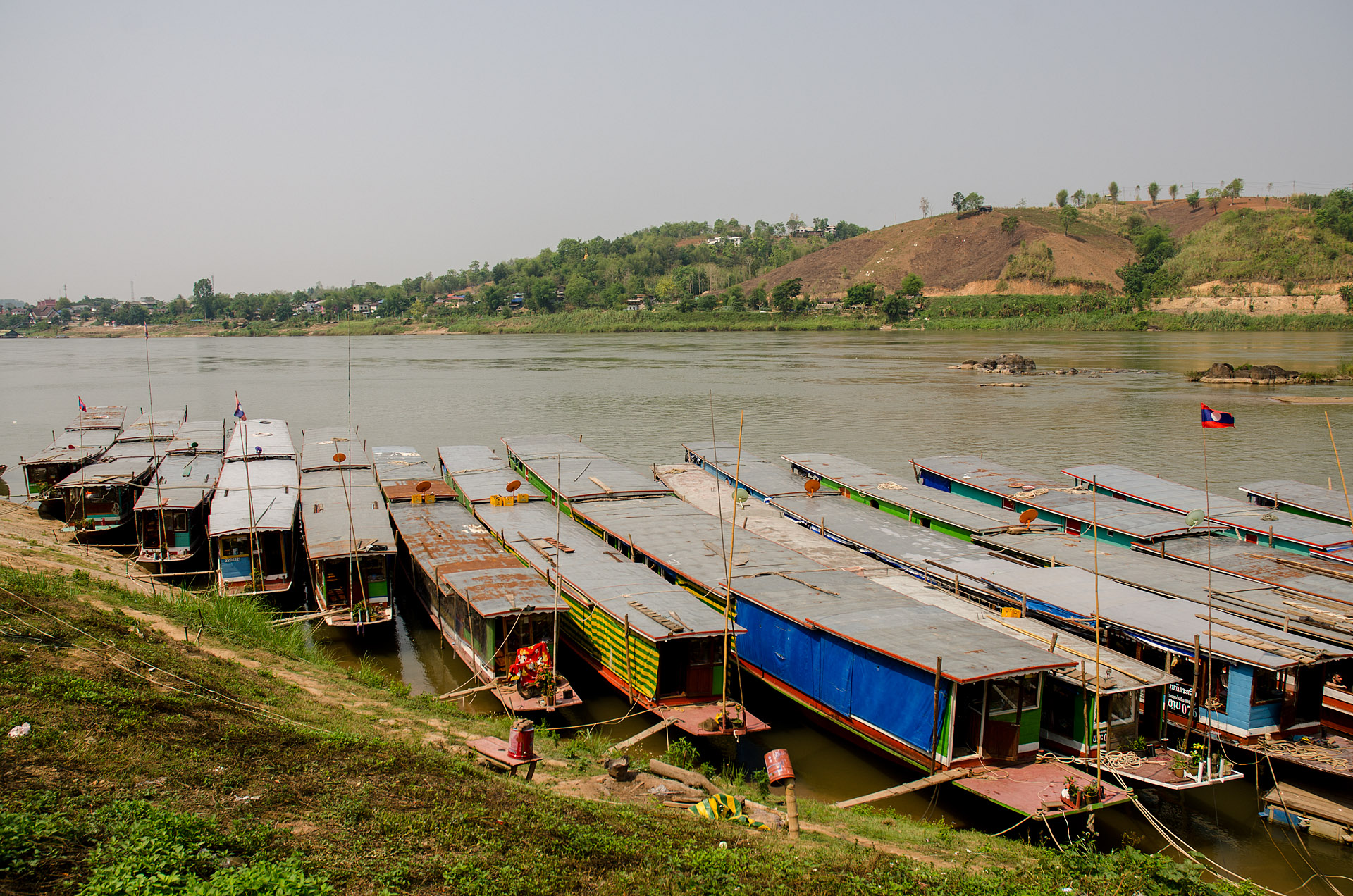 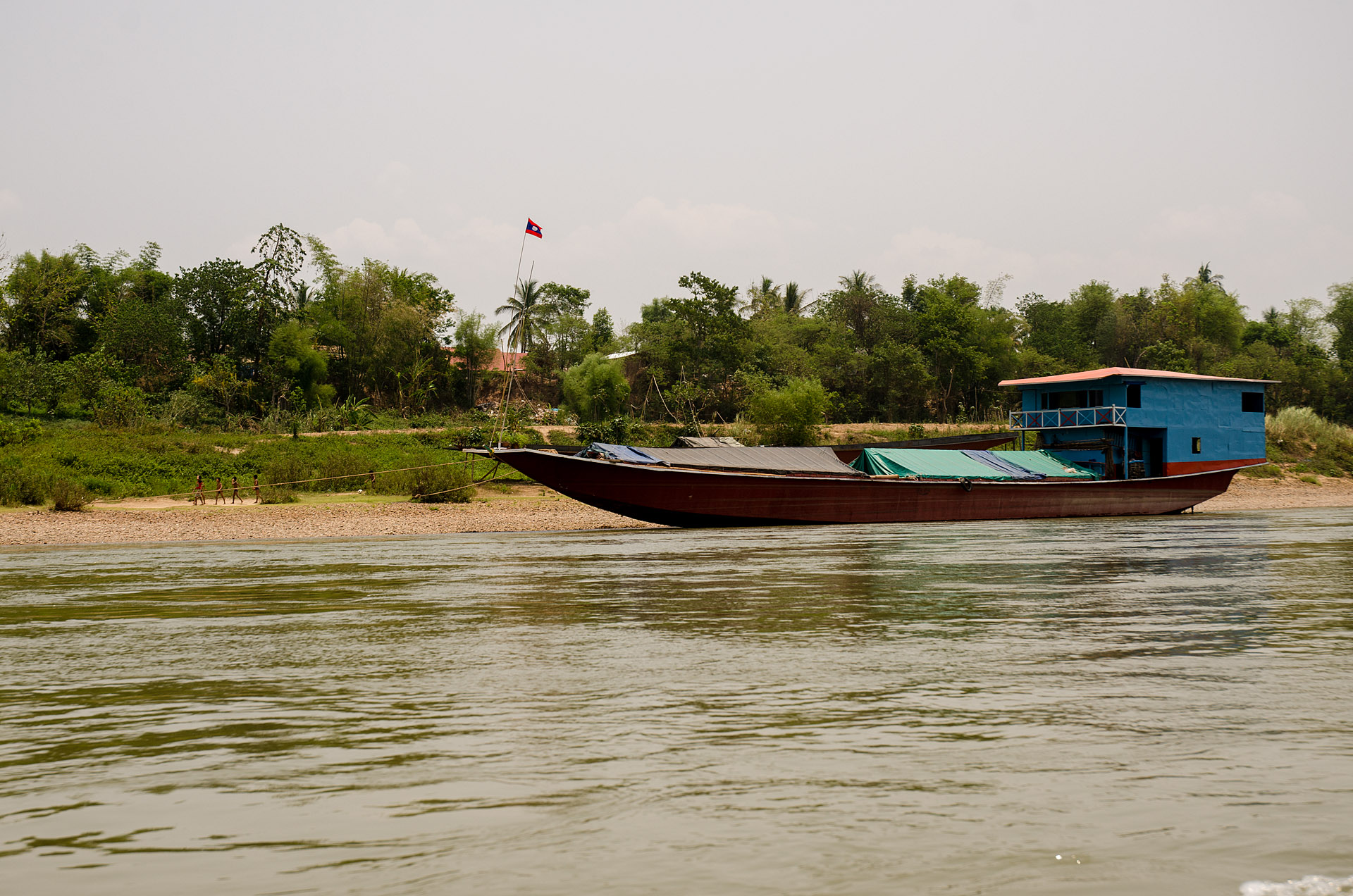 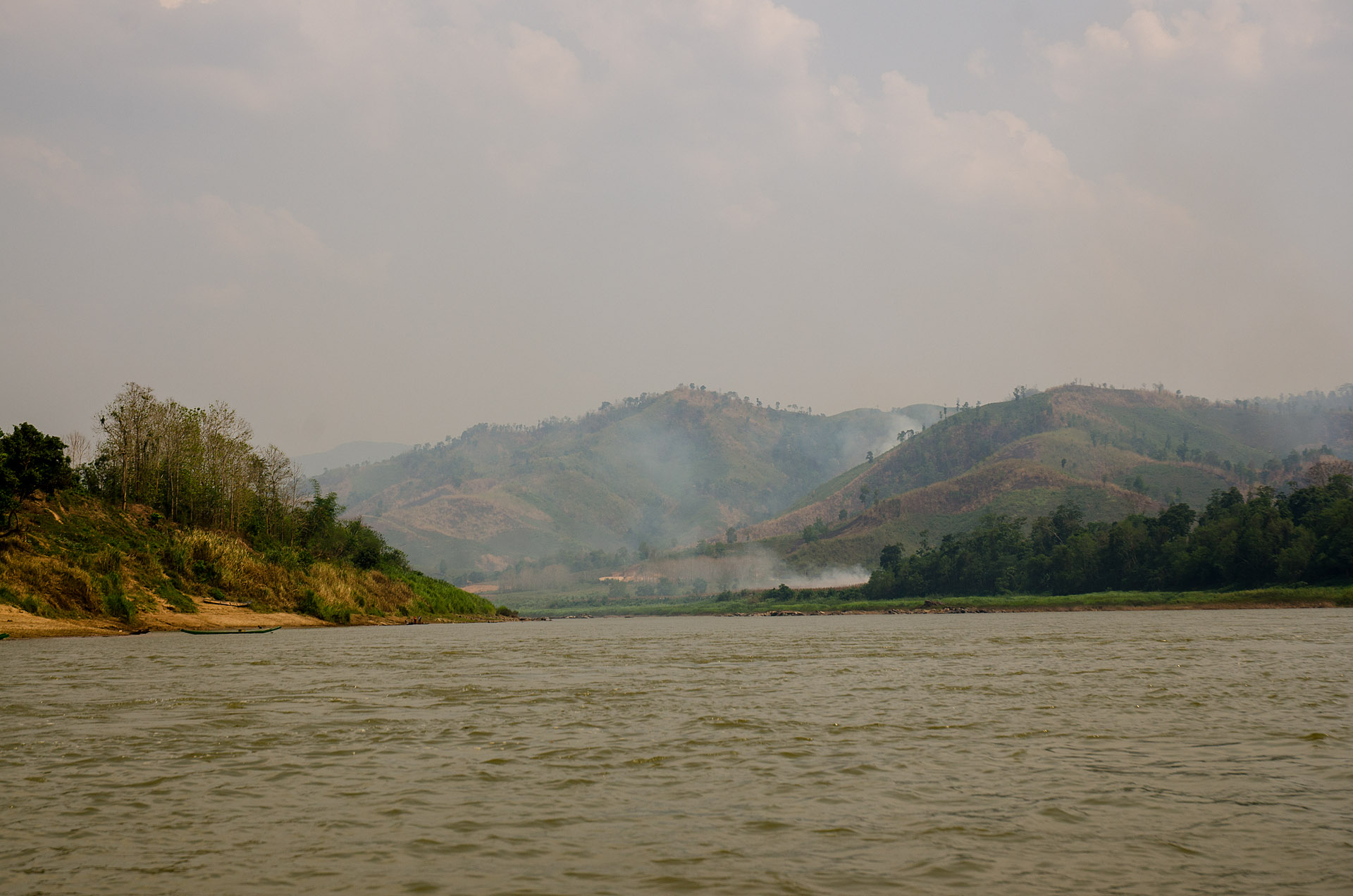 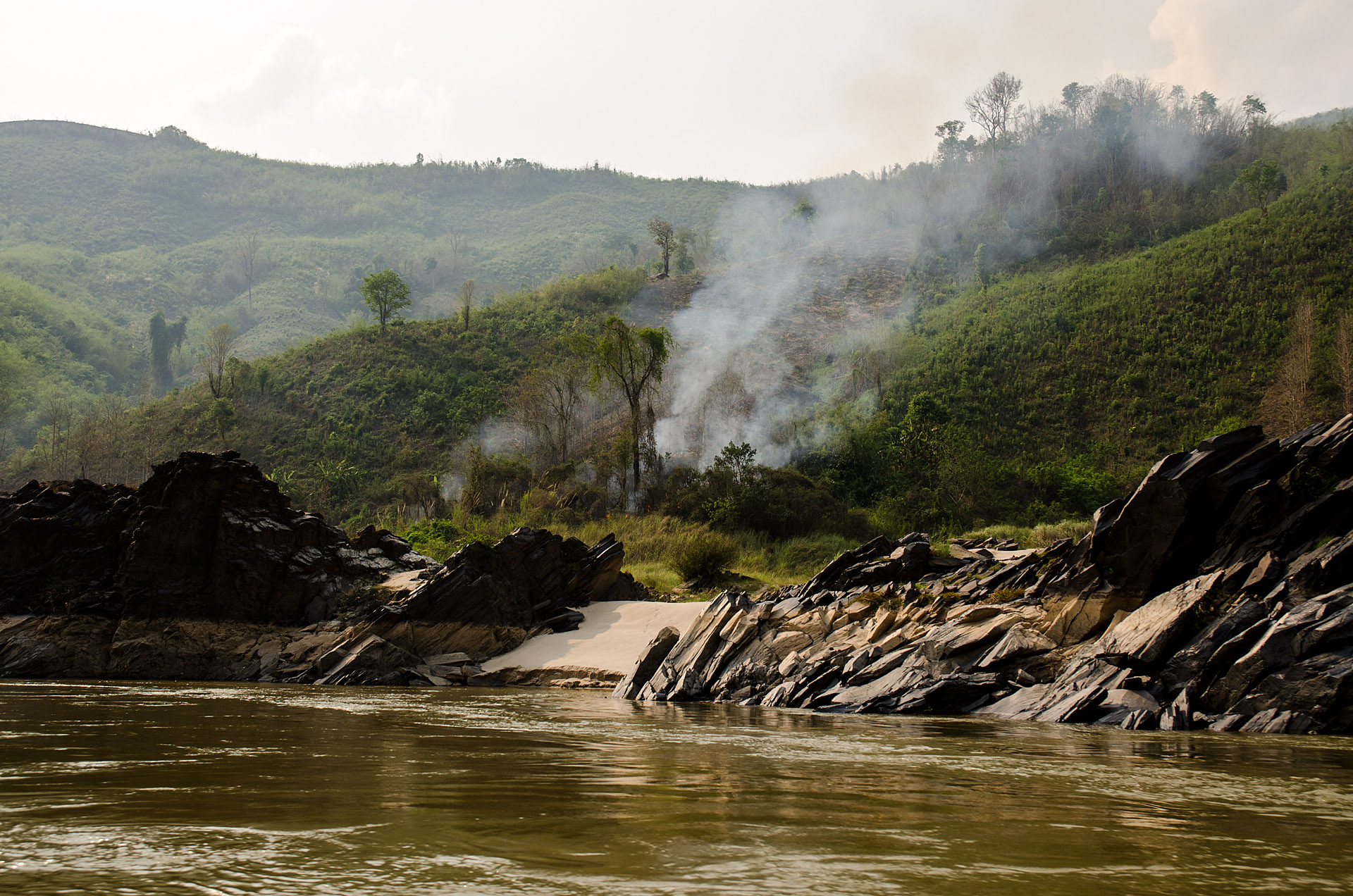 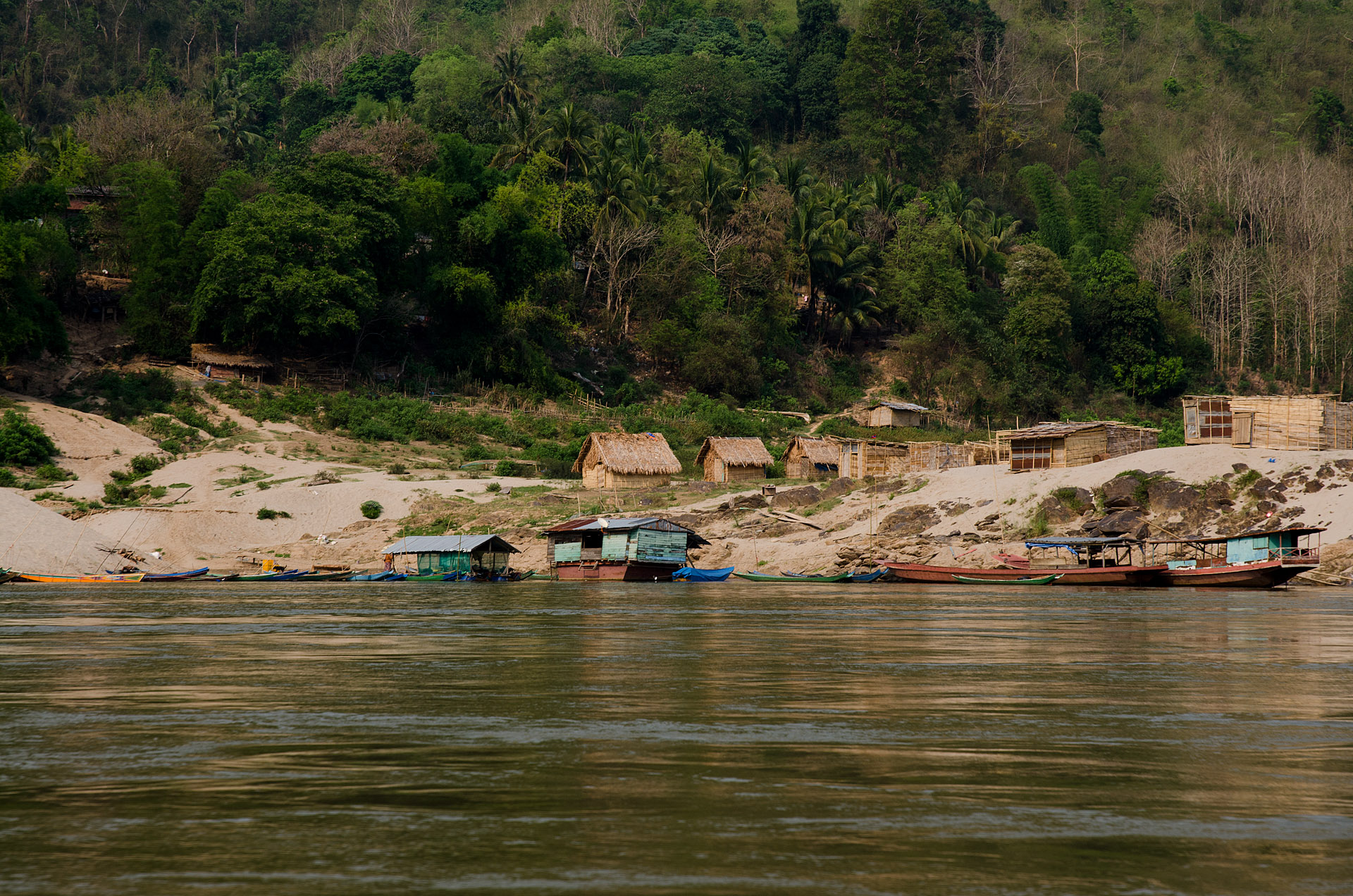 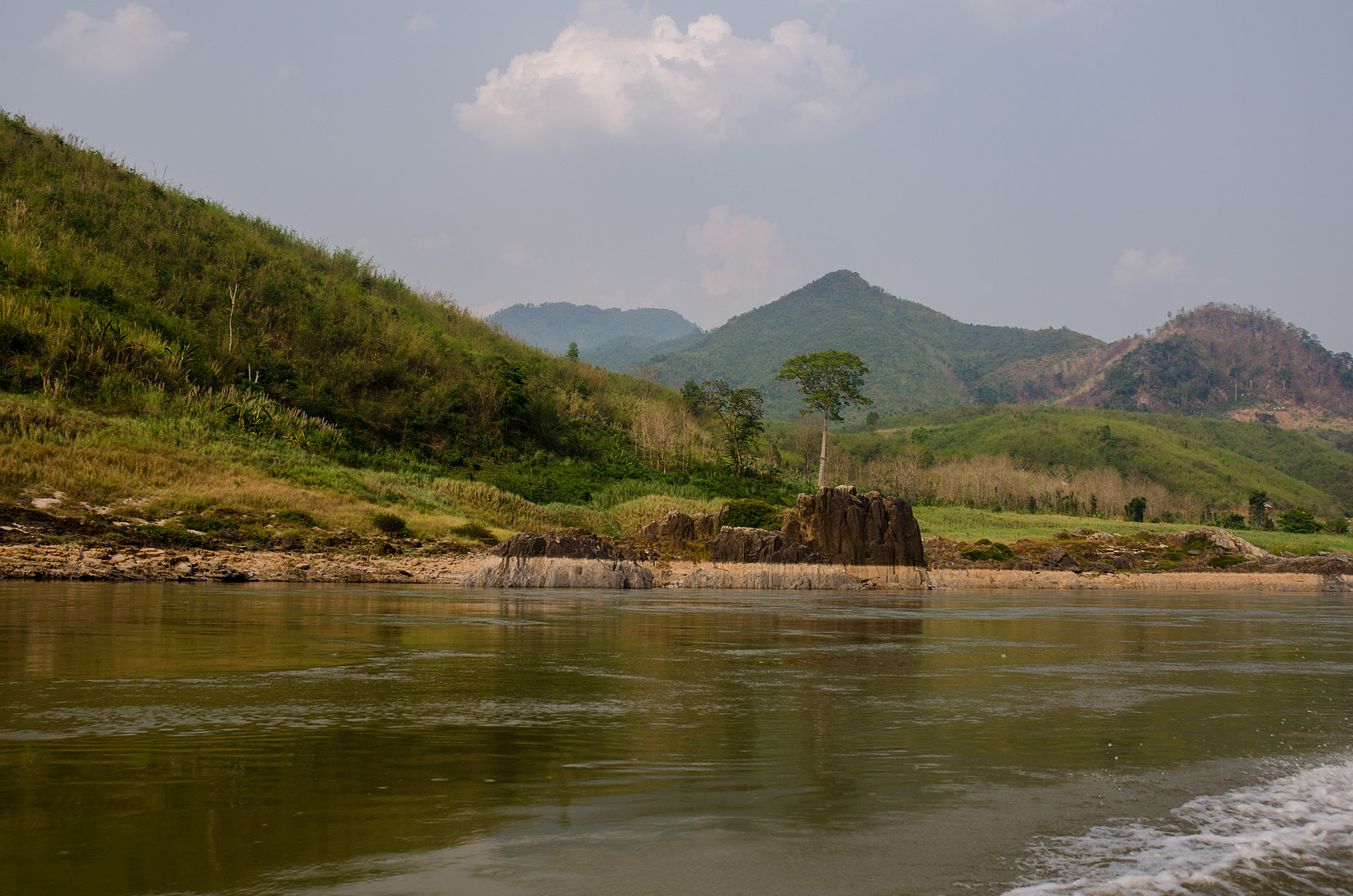 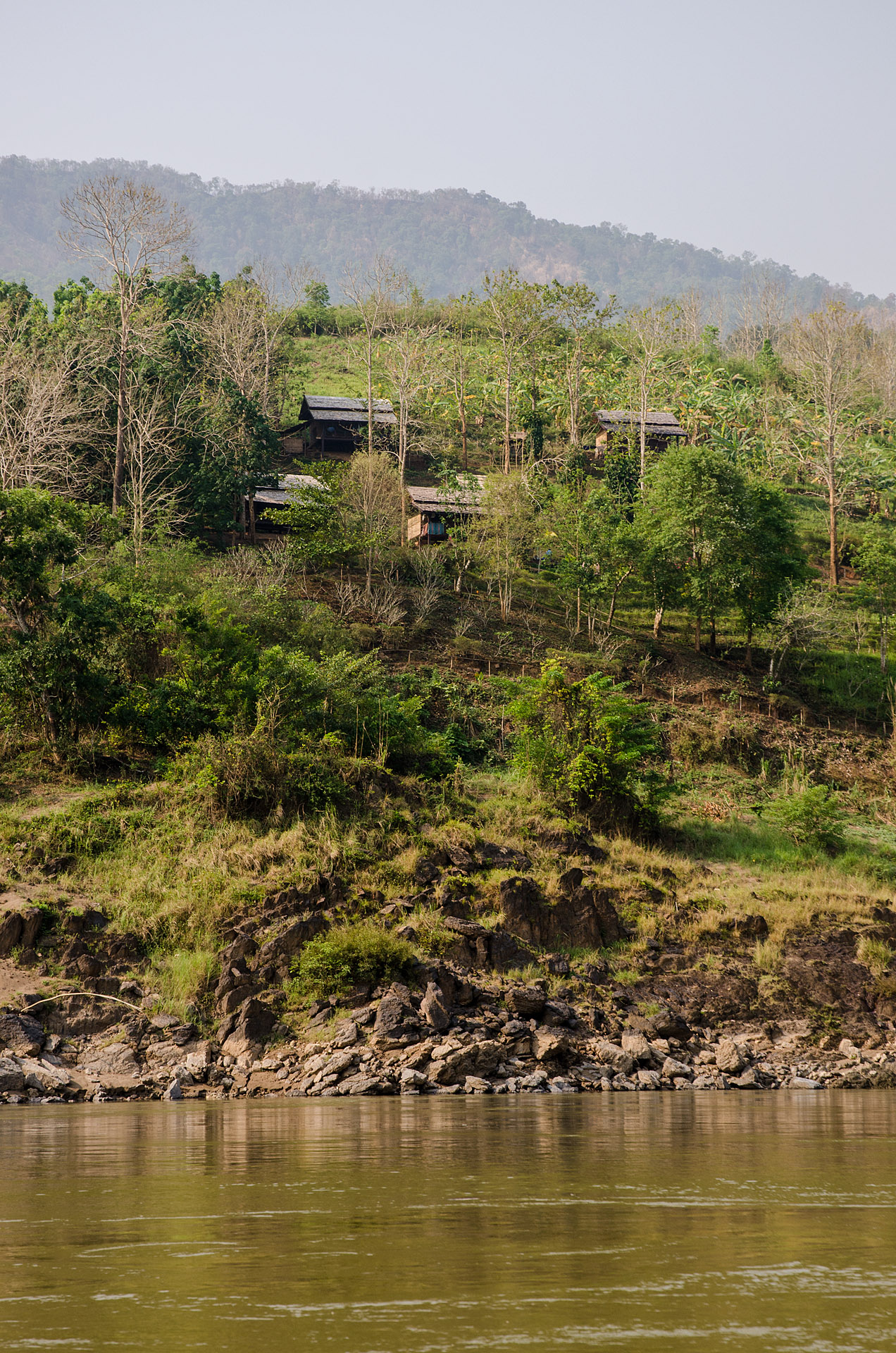 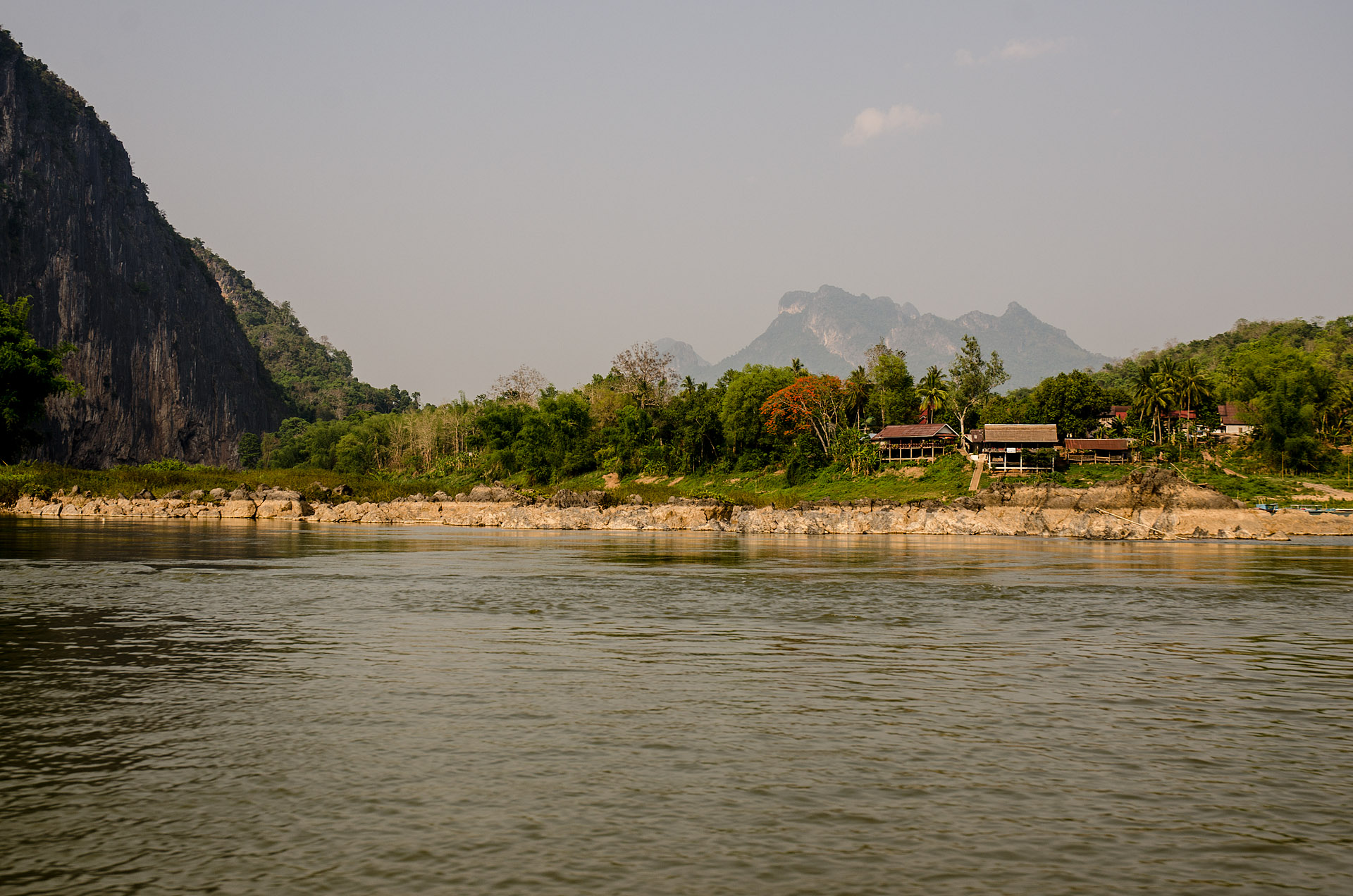 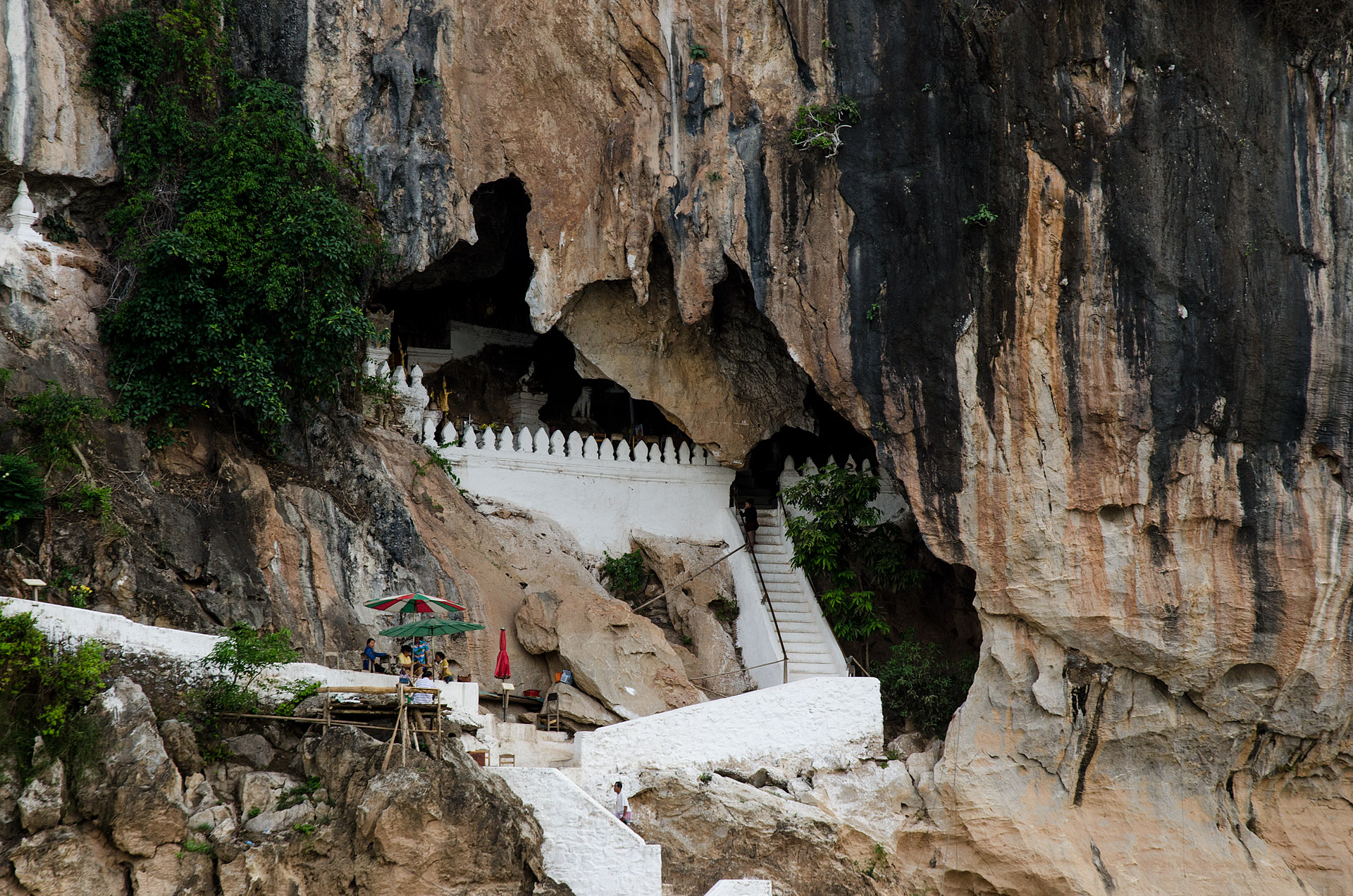 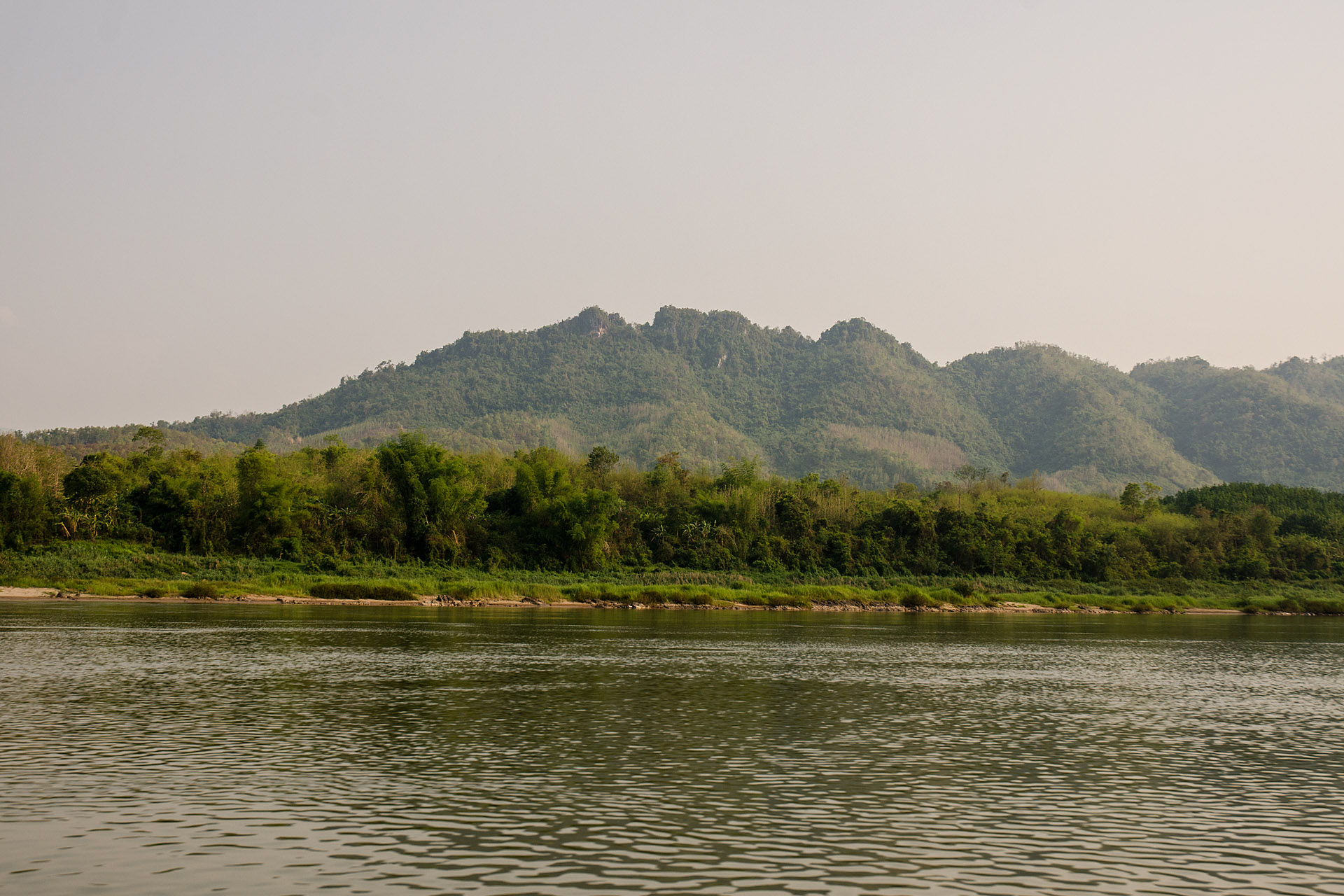 On the second day, we headed to the docks early and grabbed seats in a much smaller boat, watching with amusement as those that had slept in found themselves with no seat, filtering into the back of the boat to sit on the floor by the engine. After more than a dozen people had disappeared into the back, the boat appearing to sink lower and lower into the water, I wondered idly what the weight capacity was. In time, the parade stopped and we set off on another relaxing day of watching the scenery drift by. It was only punctuated by a single moment of excitement; as our overloaded boat hit some small rapids, we pitched heavily to one side, then the other. A few worried shrieks came out of the front of the boat, and some of the locals snatched up and buckled into the handful of lifejackets available. The river calmed, as did the boat, but those that claimed a lifejacket rode with them for the rest of the trip.

By the end of the second day we had grown weary of the one thing that, as a backpacker, you cannot escape – other (obnoxious) backpackers. While a number of us were happy to chat intermittently and enjoy the scenery, a noisy handful seemed determined to toss back as much alcohol as humanly possible. As they became progressively drunker, their volume increased while their already-limited intelligence decreased. Eventually, they were having shouted, slurred and incoherent conversations, barely heard above the music they were playing, while the rest of the boat cringed and tried to ignore them. If the trip had extended to a third day, I’m pretty sure a revolt would have ensued, resulting in them swimming the remainder of the journey.

Eventually, after 186 miles, we finally found ourselves deposited on a muddy riverbank. Like the buses, we were dropped off a solid 10 kilometers from our destination, even though there is a pier right in the city center. Feeling tired and somewhat worn, we begrudgingly caught a tuk tuk ride with a few of our (sober) fellow travelers, whose company we enjoyed, and arrived at our guesthouse in beautiful Luang Prabang.