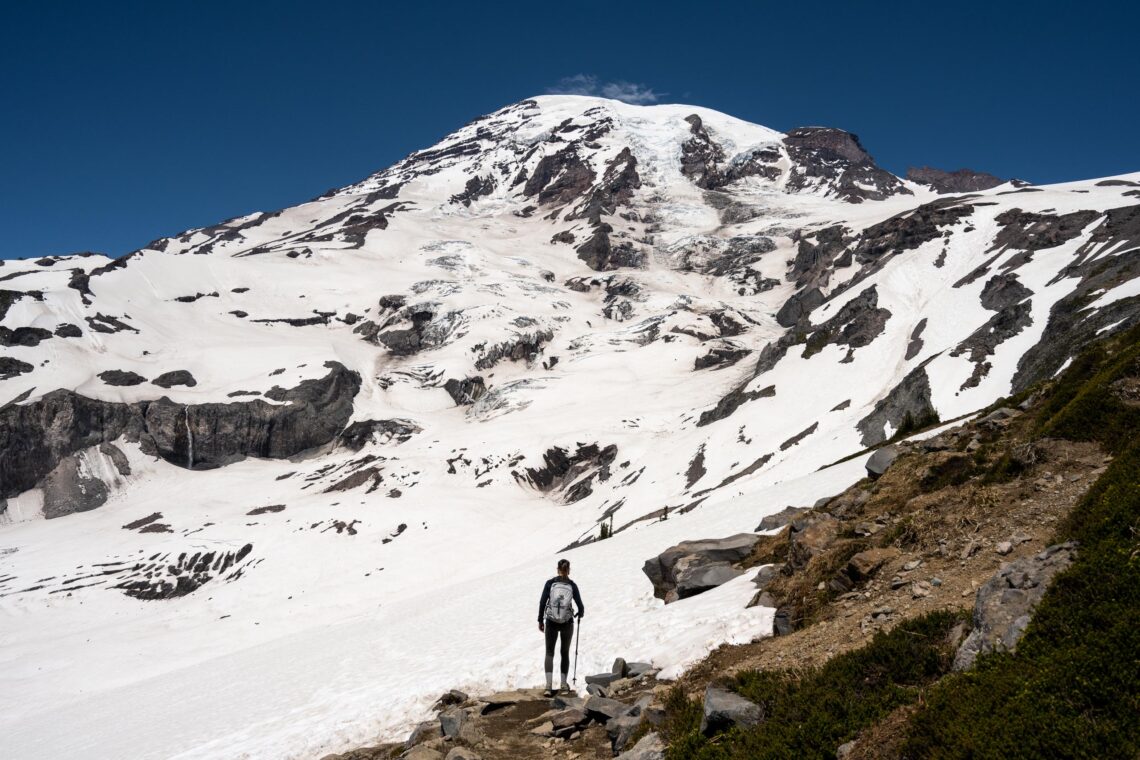 Arguably the state’s most iconic peak, Mt. Rainier’s 14,410-foot summit can be spotted from cities across western Washington. The peak is known as Tacoma or Tahoma to indigenous tribes, meaning ’snowy mountain peak.’ Although it hasn’t had a major eruption or flow for at least 500 years, the snow-capped stratovolcano is still active. What’s more, Mt. Rainier is considered the third most dangerous volcano in the U.S. based on overall threat to life and property. Sitting just 60 miles southeast of Seattle (as the crow flies), about 80,000 people currently reside within lahar-hazard zones. Because of its height and the massive amount of snow and ice on Mt. Rainier – with 25 glaciers, it’s the most glaciated peak in the continental U.S. – it’s likely that an eruption would produce lahars (debris flows) that are both larger and travel further than those that swept down Mt. St. Helens’ slopes during the 1980 eruption.

Beginning in the Paradise Valley area, on the south side of Mt. Rainier, the Skyline Trail is one of the national park’s most popular hiking routes. The trail is typically hiked as a 5.5-mile loop, gaining about 1,500 feet of elevation to a highpoint of ~7,000 feet. However, when we visited towards the end of June, the trail was still completely buried under several feet of snowpack. Consequently, we ended up hiking the western side of the loop as an out-and-back up to Panorama Point (i.e. clockwise from the trailhead, if considering the full loop). The eastern portion of the loop was still a bit dicey when we visited, and we weren’t keen on getting my parents in wildly over their heads on my mom’s first real hike.

When we arrived at the parking area, we handed our spikes and poles over to my parents, and shoved all their supplies into our two packs. We then made one last attempt to convince my mom that this would be fun. She’s not into hiking, she’s not into getting up at 5 a.m. to go hiking, and she’s even less into snow. I mean, could I have picked a more perfect outing for the poor woman?

Beginning just behind the Paradise Inn and neighboring Visitor Center, the Skyline Trail began by meandering north along a ridgeline along Rainier’s southern slopes. The grade was pretty moderate here, though it was a steady climb up to the point. From almost the minute we stepped on the trail, we had a pretty awesome and unending view of the 14,000-foot summit and Nisqually Glacier. For the next couple miles, the trail made its way to Panorama Point under the mountain’s ever-present watch. We couldn’t believe how much snow was still present when we visited; along the length of trail, the tiny, bowed tips of evergreen trees peeked out from the wintry shroud. 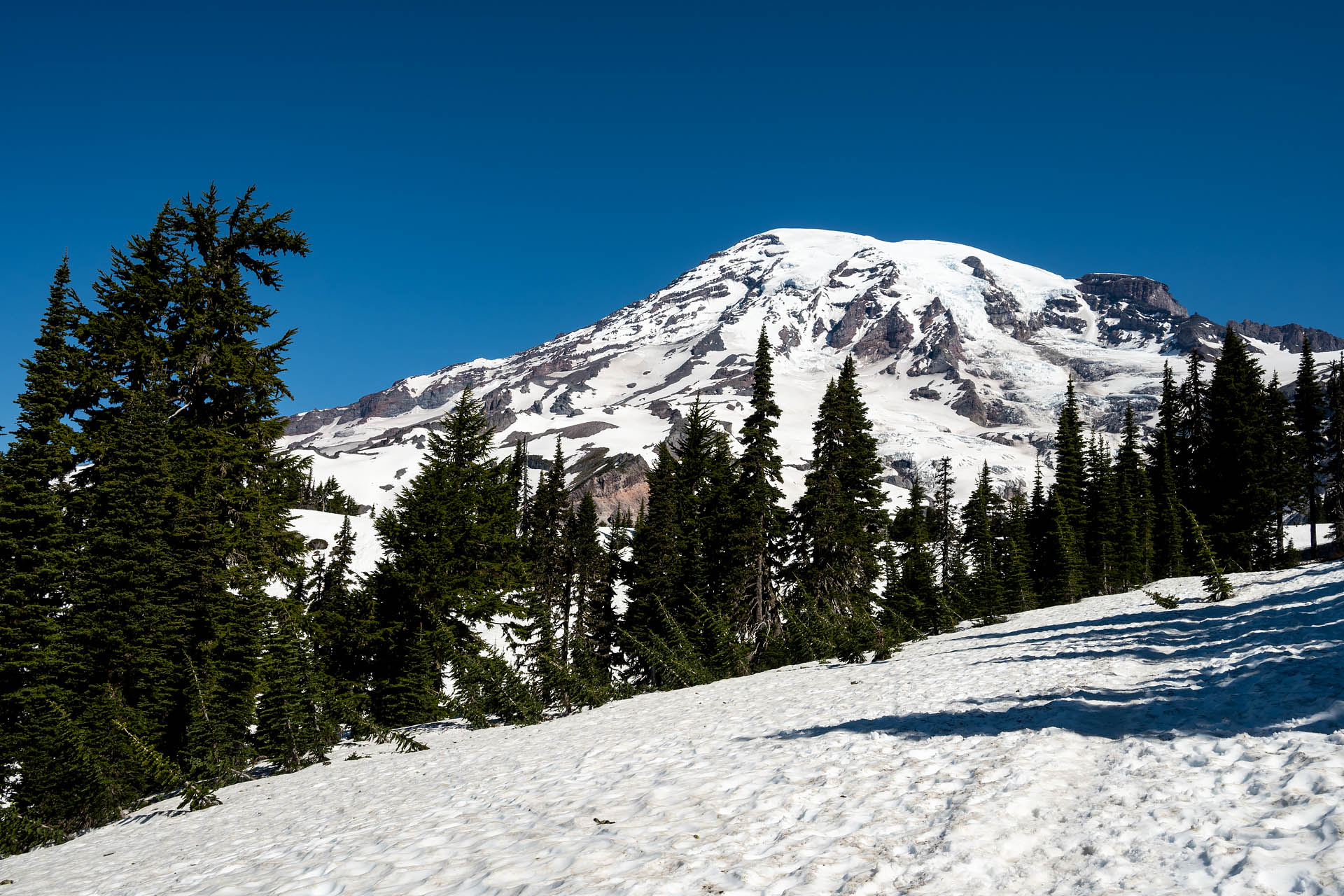 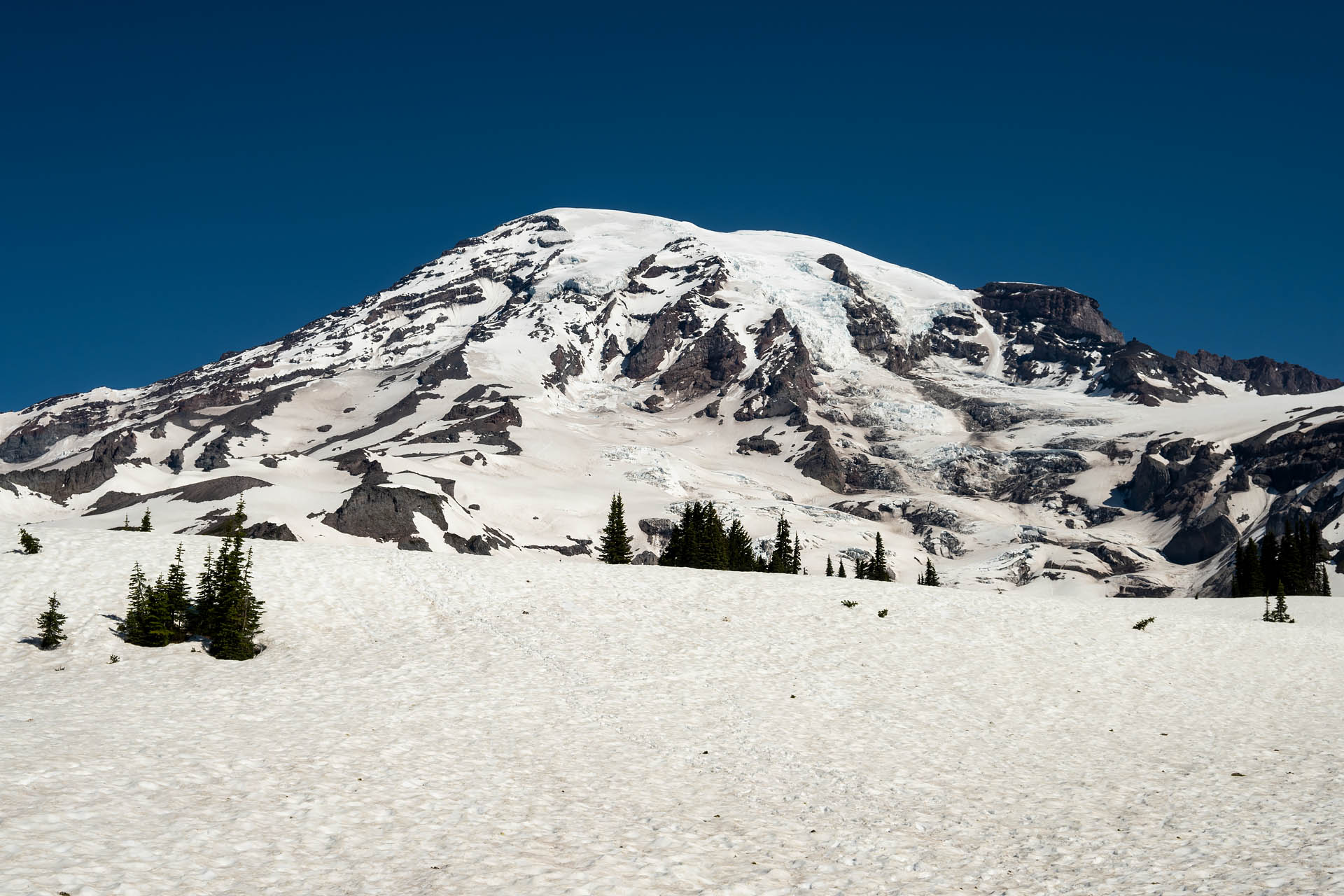 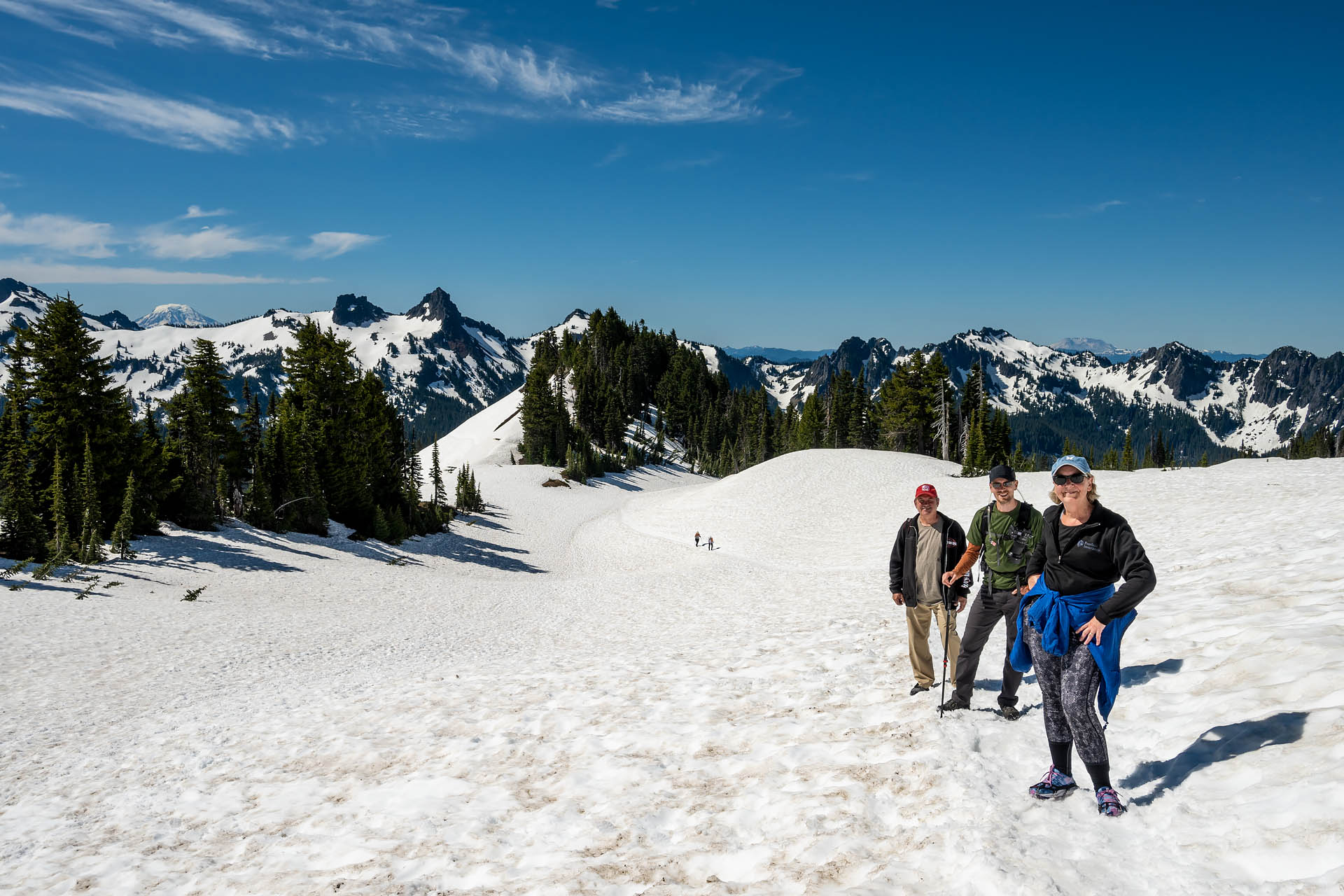 As the trail gained elevation, the views to south quickly opened up. The summits of Mt. Adams and Mt. St. Helens – two of Washington’s other notable stratovolcanoes – came into view, soaring above the more modest peaks of the Southern Cascades. It was such a crystal clear day, even Mt. Hood’s distant silhouette was easily recognizable. 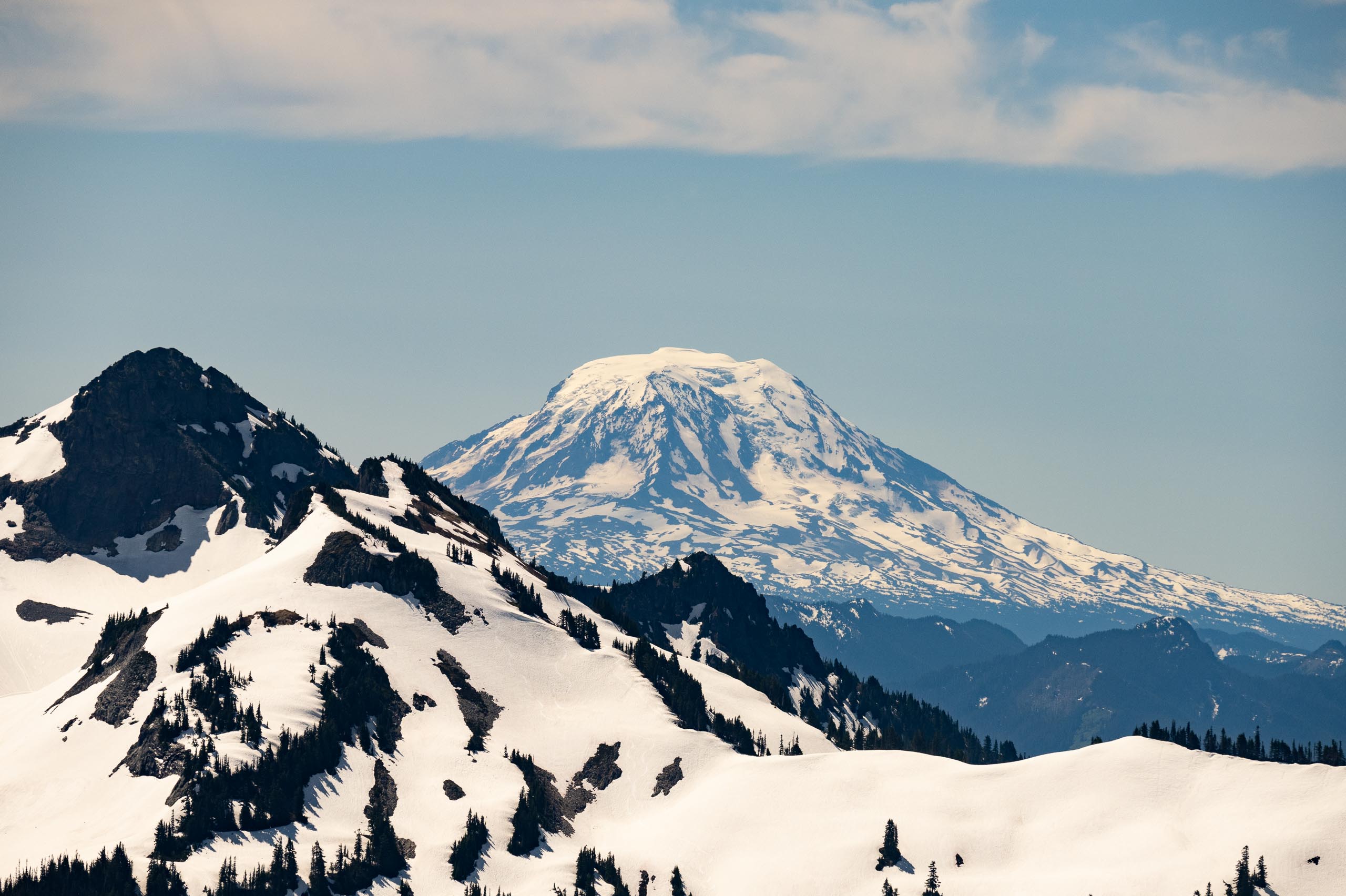 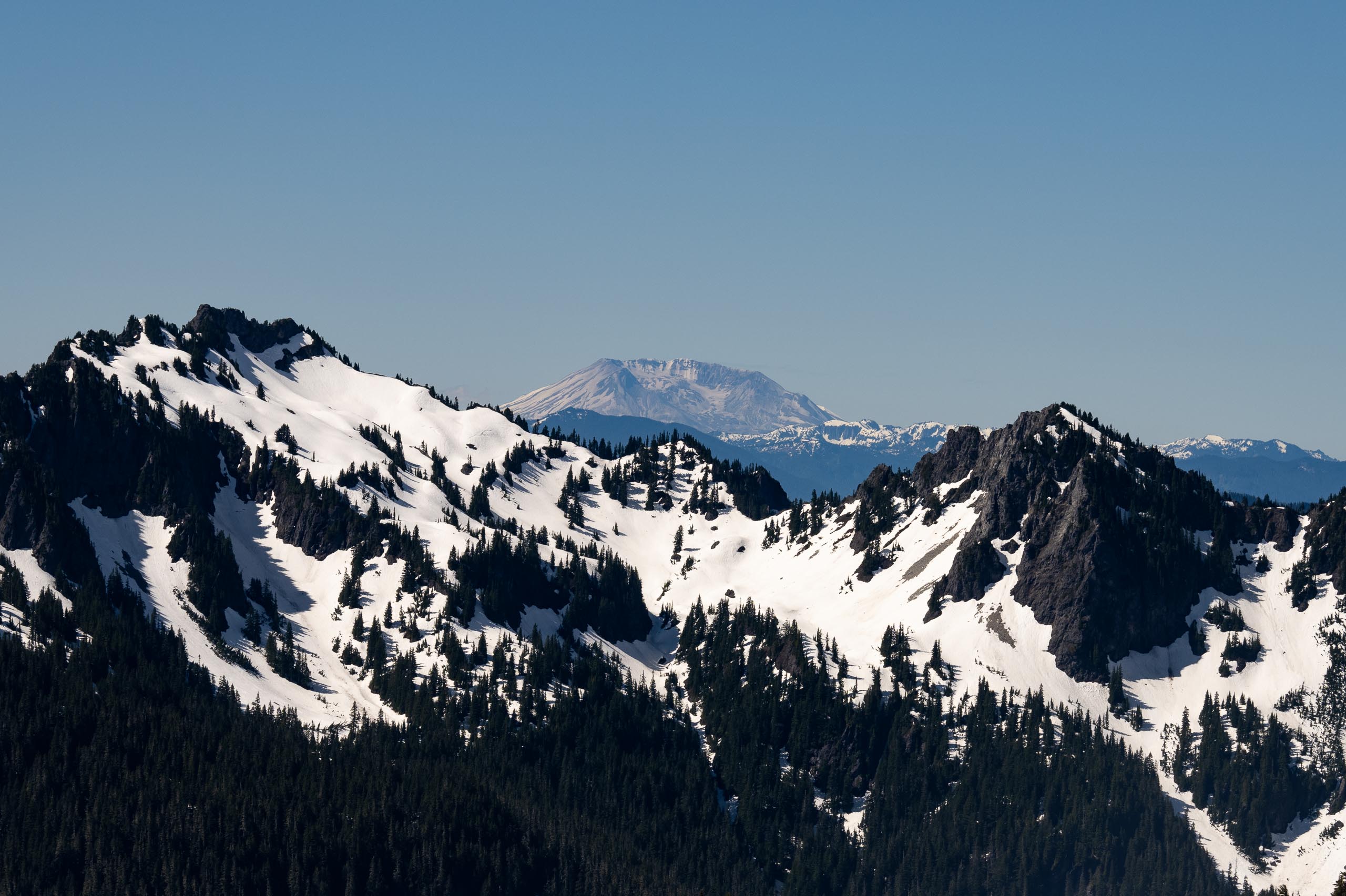 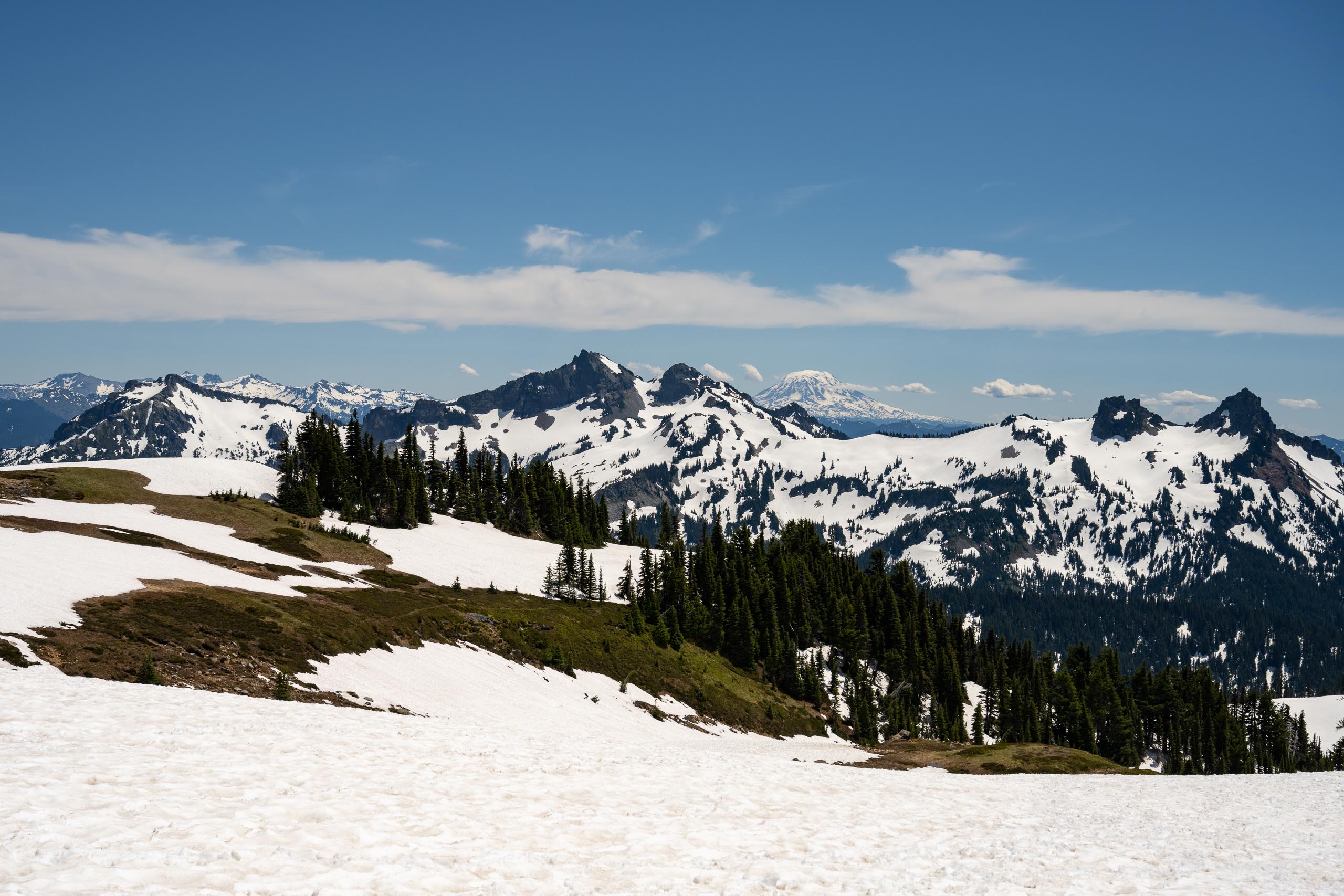 In some of the higher, sun-drenched sections of trail, we’d intermittently hit a patch of dirt or nascent alpine meadow. In one small clearing of desiccated grass, a couple clusters of western anemone (pasqueflower) had come into bloom amongst all the snow. We even spotted a hoary marmot scampering across the meadow with a mouthful of grass, an adorable distraction I’d hoped would take my mom’s mind off all that uphill exertion. 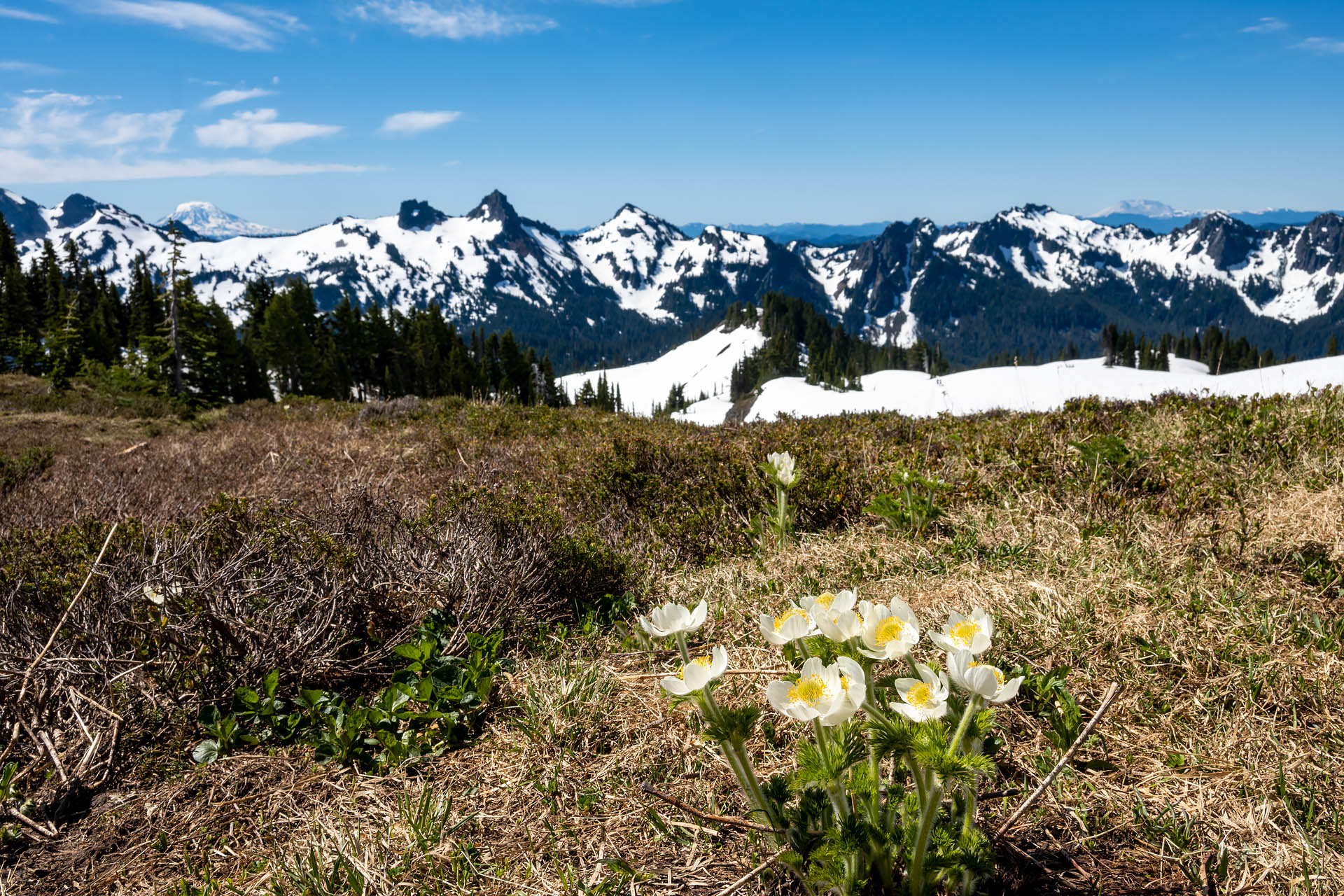 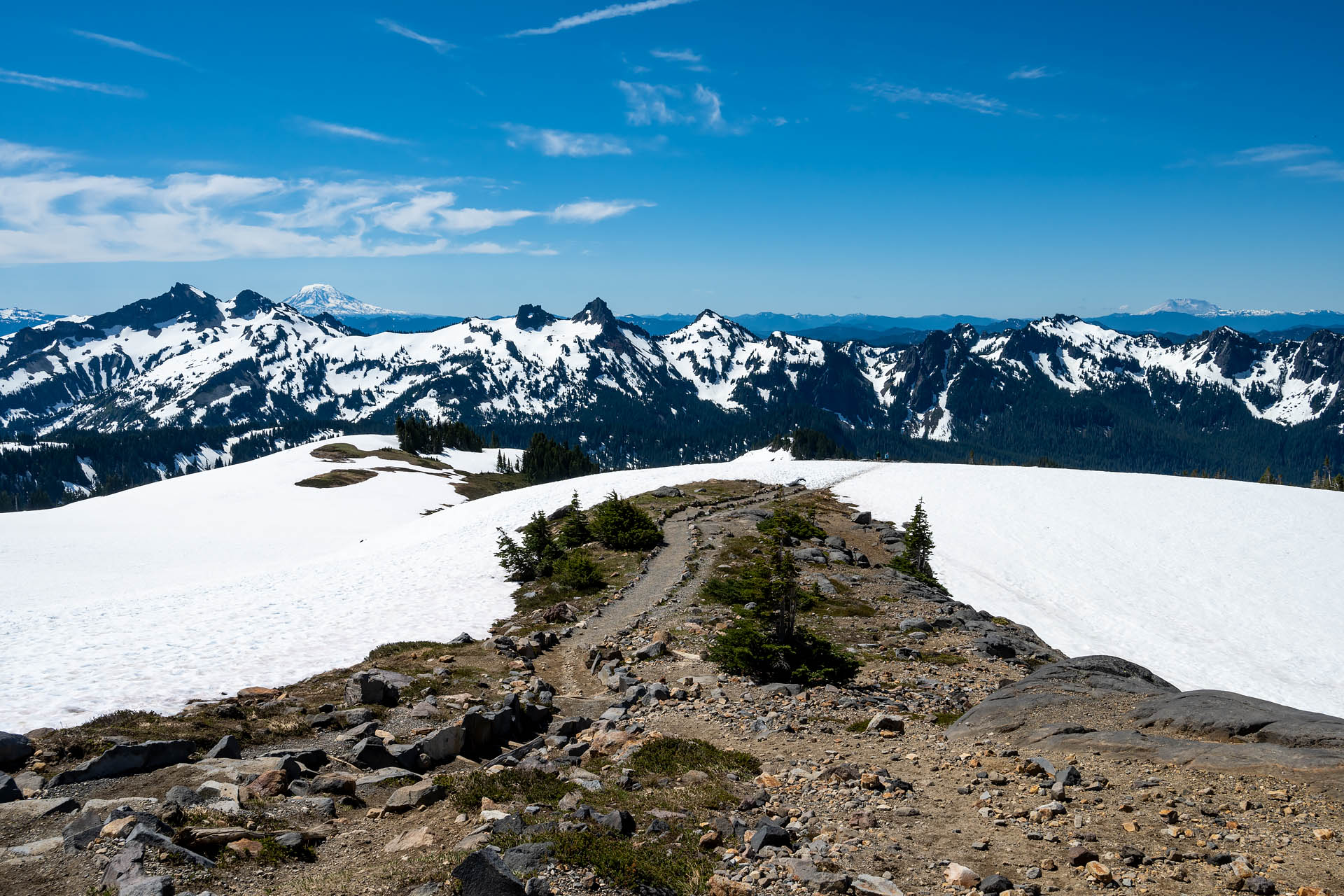 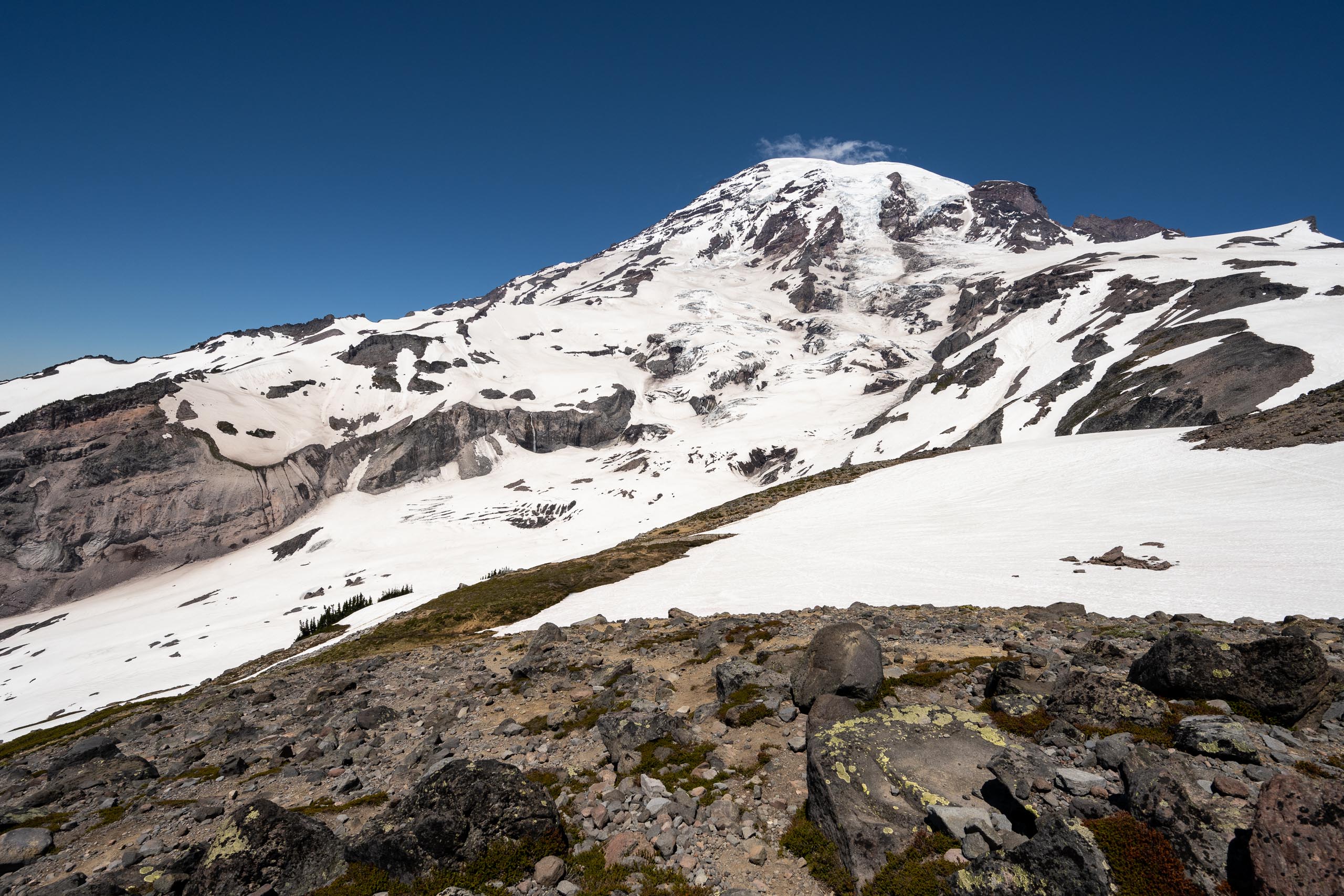 If you’re new to hiking, this trail might prove to be a bit of a challenge. I had hoped it would push my mom’s comfort zone a bit, but I think I may have shattered it completely. Since it happened to be my birthday, I teasingly asked her if she’d rather be hiking or in labor as she pushed herself up the ridgeline. She replied with zero hesitation, “Giving birth. At least then you get drugs.” And there you have it… the two things missing from my overstuffed pack were apparently an epidural needle and vial of painkillers. Who’d have guessed?

While my mom may not have loved every minute of the trail, she ultimately conquered it. She pushed herself on and eventually made it up to Panorama Point. And while it may have been a struggle, I hope she found an ounce of pride under all that sweat and breathlessness. She even managed to keep smiling through the pain… at least for photos. 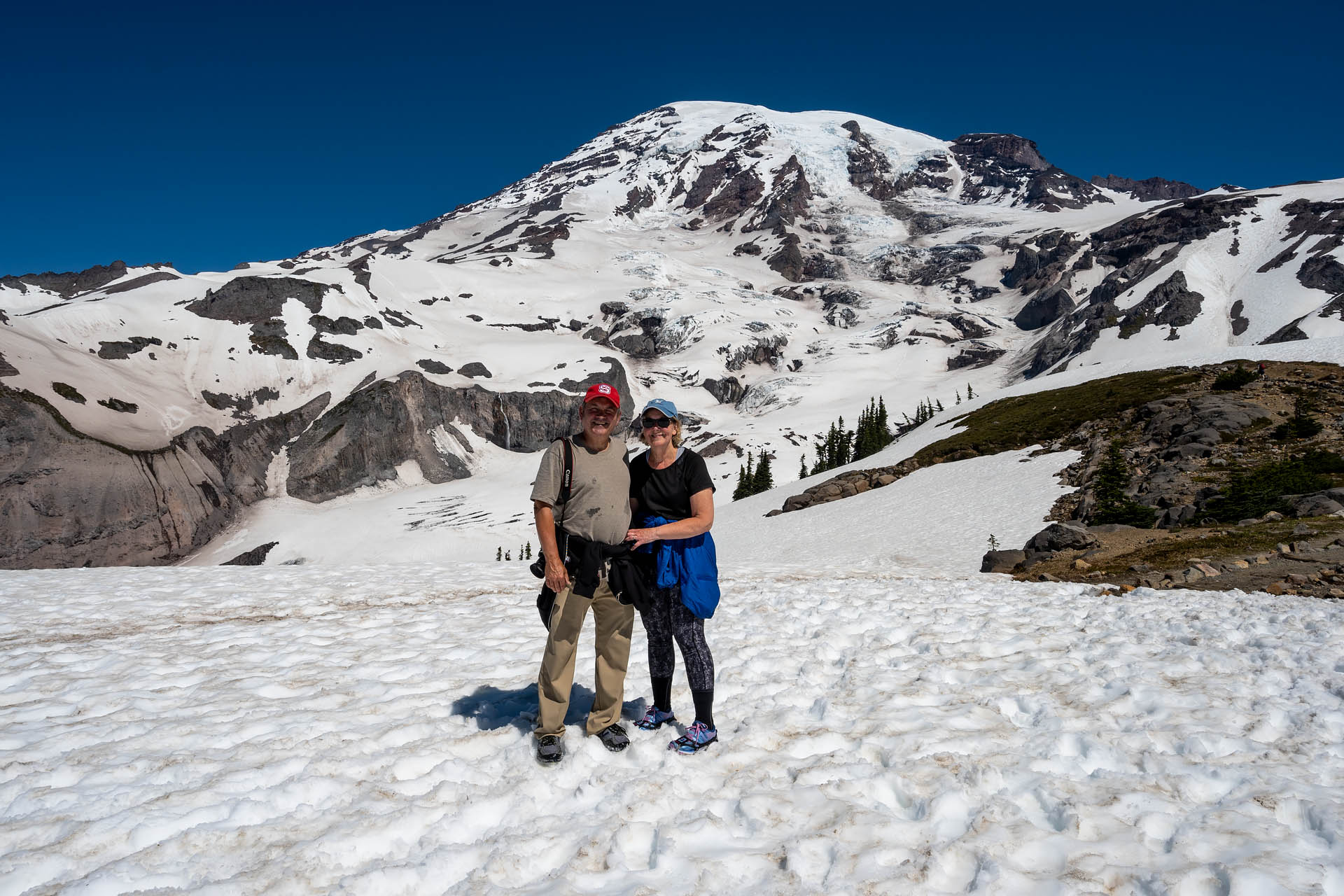 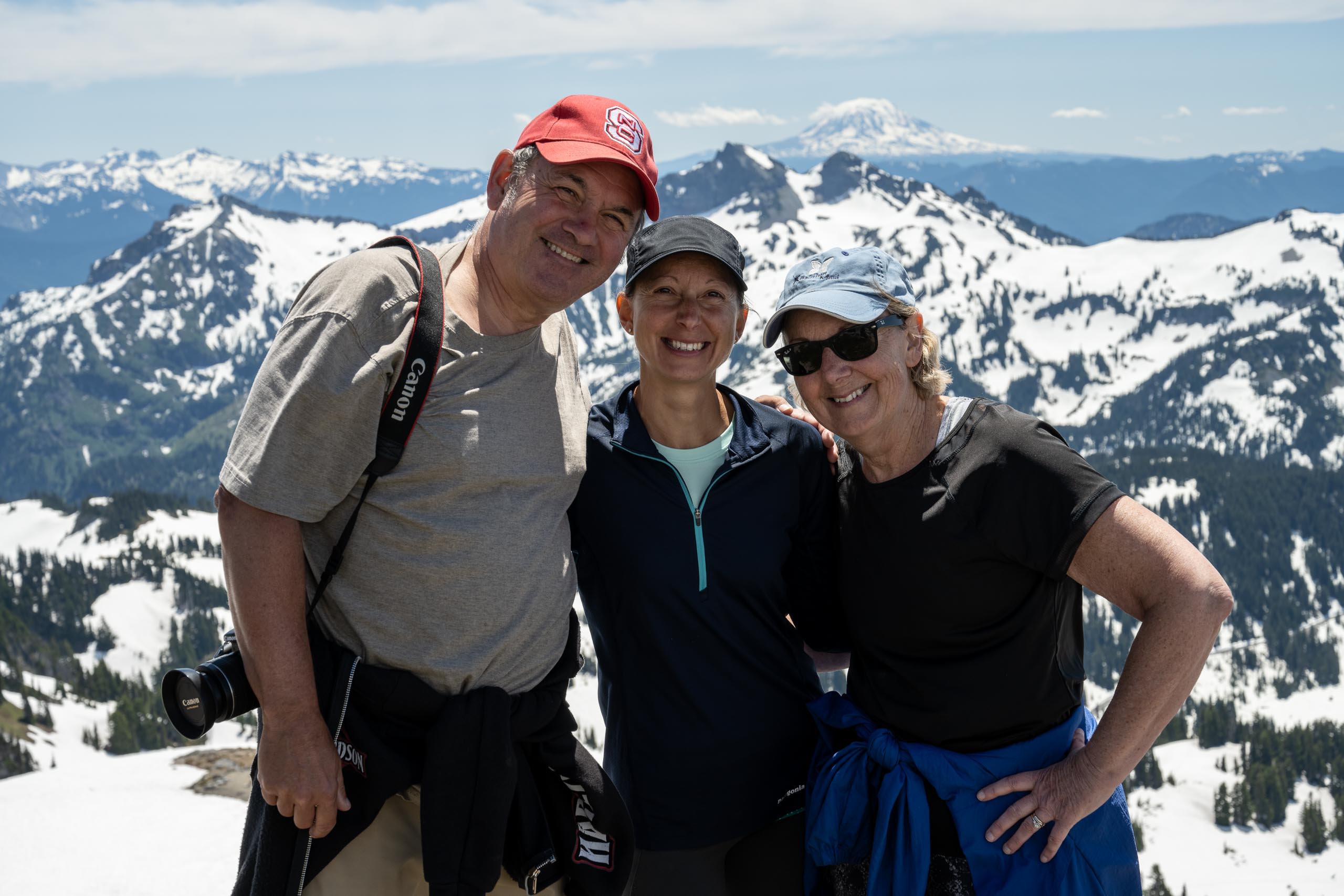 Her reward for all that effort was a gourmet PB&J on whole wheat – also something she is not into. While I totally empathize with how unpalatable it is, unfortunately it’s the ultimate in portability and practicality. More importantly, though, was that it was all we had that constituted a ‘real’ meal. Ever the sport, she found a way to choke down the objectionable lunch. While the sandwich may have been massively subpar, the views from the top did not disappoint – snowy peaks stretching out as far as you could see, a horizon peppered with towering volcanoes, and a glaciated summit looming just overhead.

After soaking in the scenery, we returned to the trailhead the way we came. As we approached the lone switchback on the trail – the one spot that made my mom a little uneasy with its ‘edginess’ – I told her she had a decision to make. She could either make her way around that switchback, or bypass the hairpin via a beautiful little glissading track. Given her aforementioned disdain of snow and all things winter, I thought for sure she’d choose the switchback. Surprisingly, after Stephan and I sent ourselves down the hill to demonstrate, she put her butt in the chute and down she came. I mean, check out that form!

As for that crazy lunatic behind her who didn’t wait for her to clear the chute before barreling down… that’s my dad. I don’t know if he secretly buttered his ass before launching himself down the track, but I was not prepared to see him come down with such speed. For a split second, all I could picture was him going ass over tea kettle and I could barely watch. Stephan thought he could have been Chevy Chase’s stunt double in Christmas Vacation. I think it may explain a few of our sledding accidents when I was a kid. And seriously, thank heavens my mom didn’t poke his eye out with that stupid pole since she had no clue he was right behind her. If you’re interested in the dos and don’ts of beginners’ glissading, I think this video sums it up beautifully.

They may have been a little worse for wear than we they started, but eventually everyone made it back to the trailhead in one piece. And now that it’s a few weeks later and all the leg soreness and fatigue has subsided, I hope my mom can look back on the adventure with even a hint of self-satisfaction. As for my dad? I hope he’s grateful that he – and the DSLR he was holding – survived that surprisingly unrestrained glissade. He has been considering some new camera gear, though, so maybe this was all a ploy to serendipitously ditch his aging Rebel. Aside from that, I hope he enjoyed his close-up look at Rainier’s snowy crown, as he’d been pretty awestruck with the soaring summit from the moment he spotted it from the airplane window. 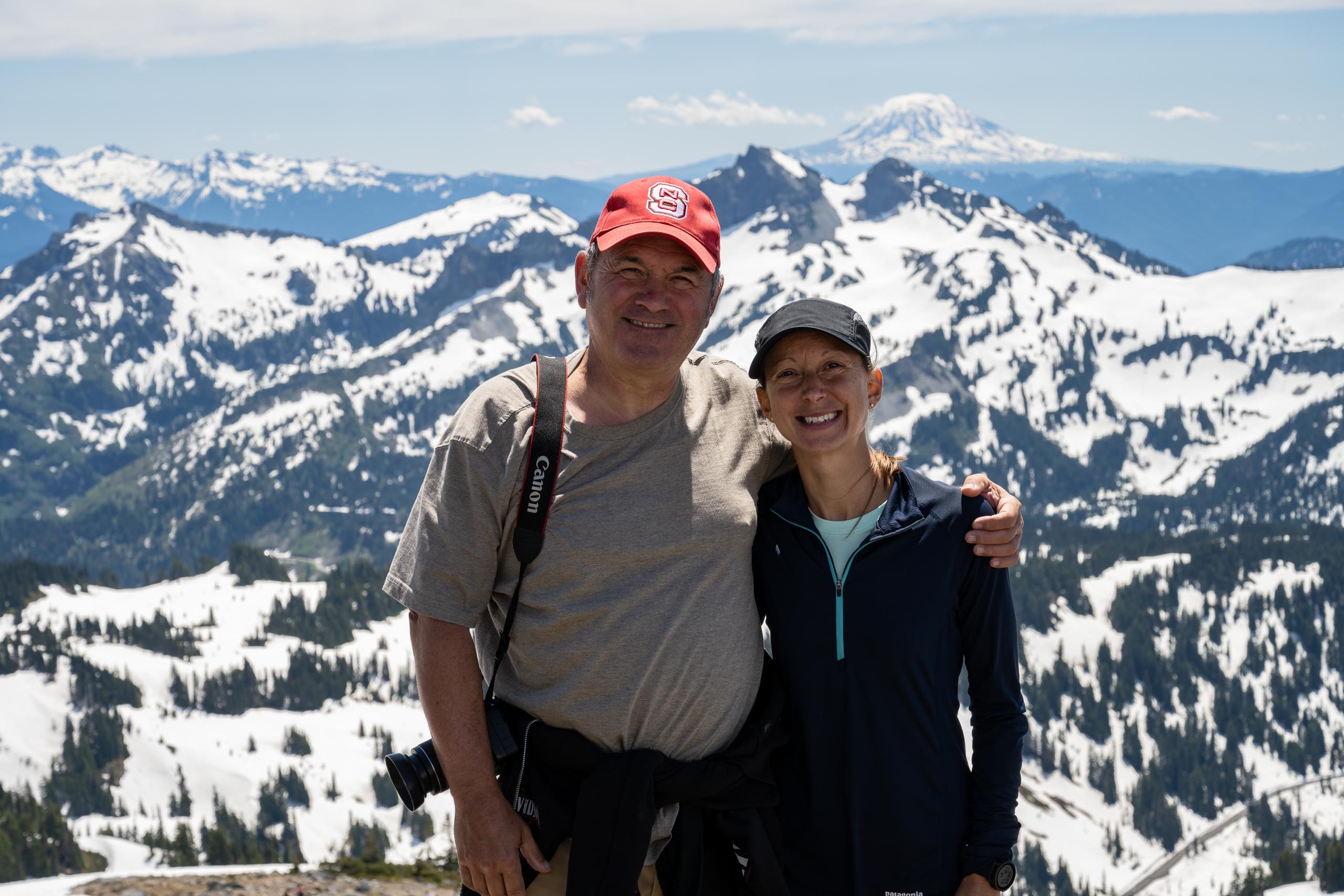 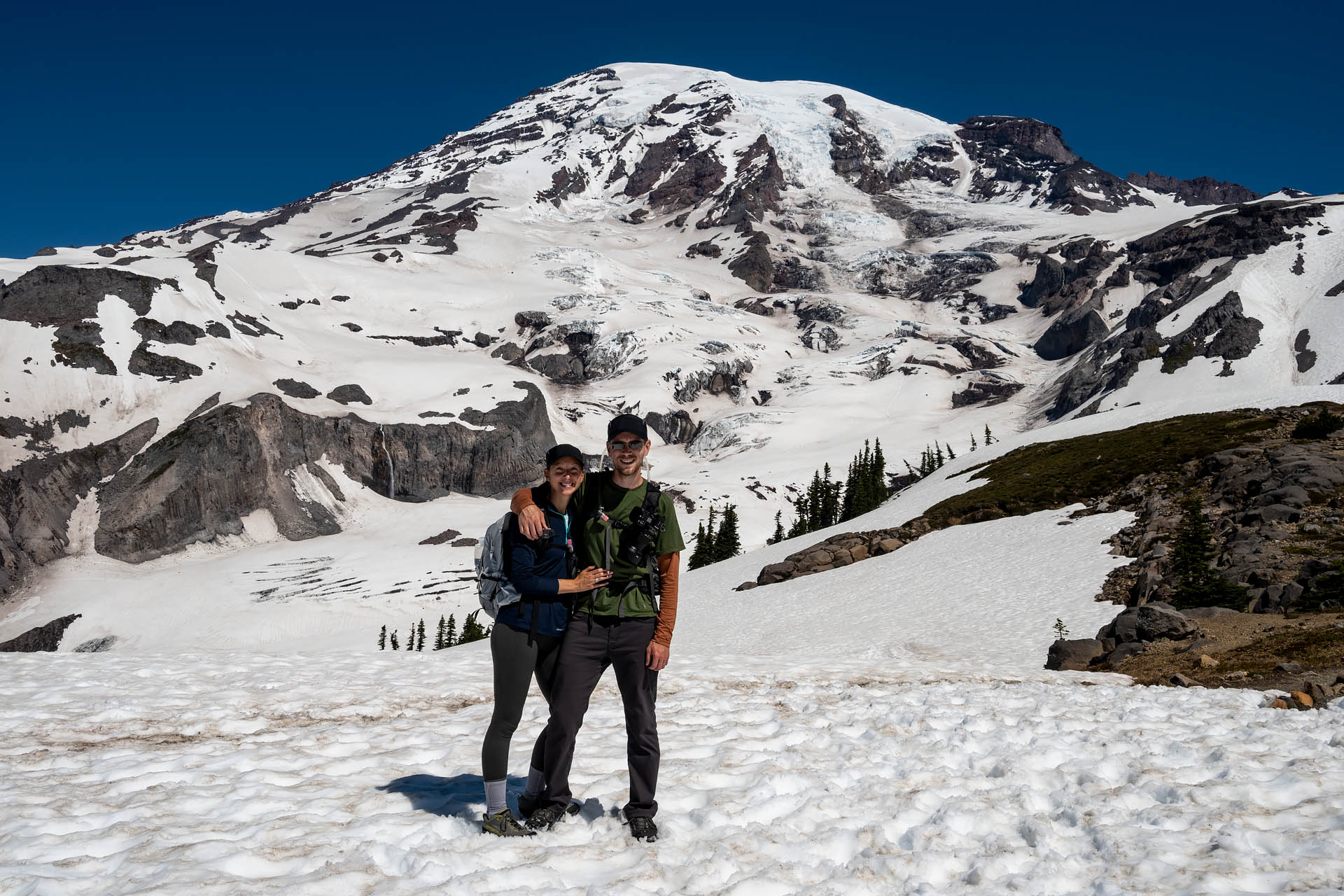 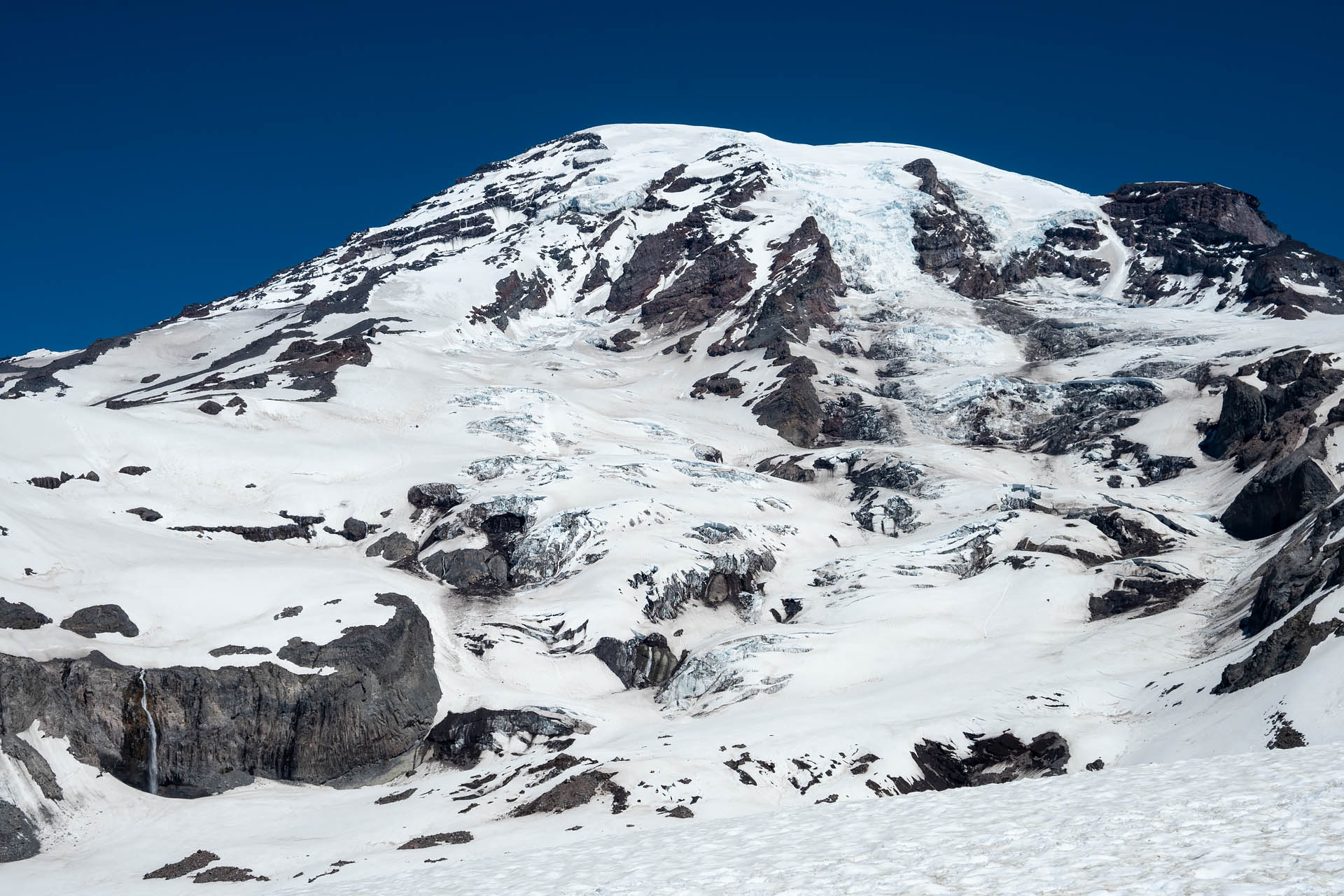 If you’re looking for a hike with some pretty sweet views of Mt. Rainier’s summit and neighboring volcanoes, the Skyline Trail shouldn’t disappoint. Additionally, if you’re looking to torture your parents or any other loved ones in your life who may be new to hiking, this just might be the place to do it. 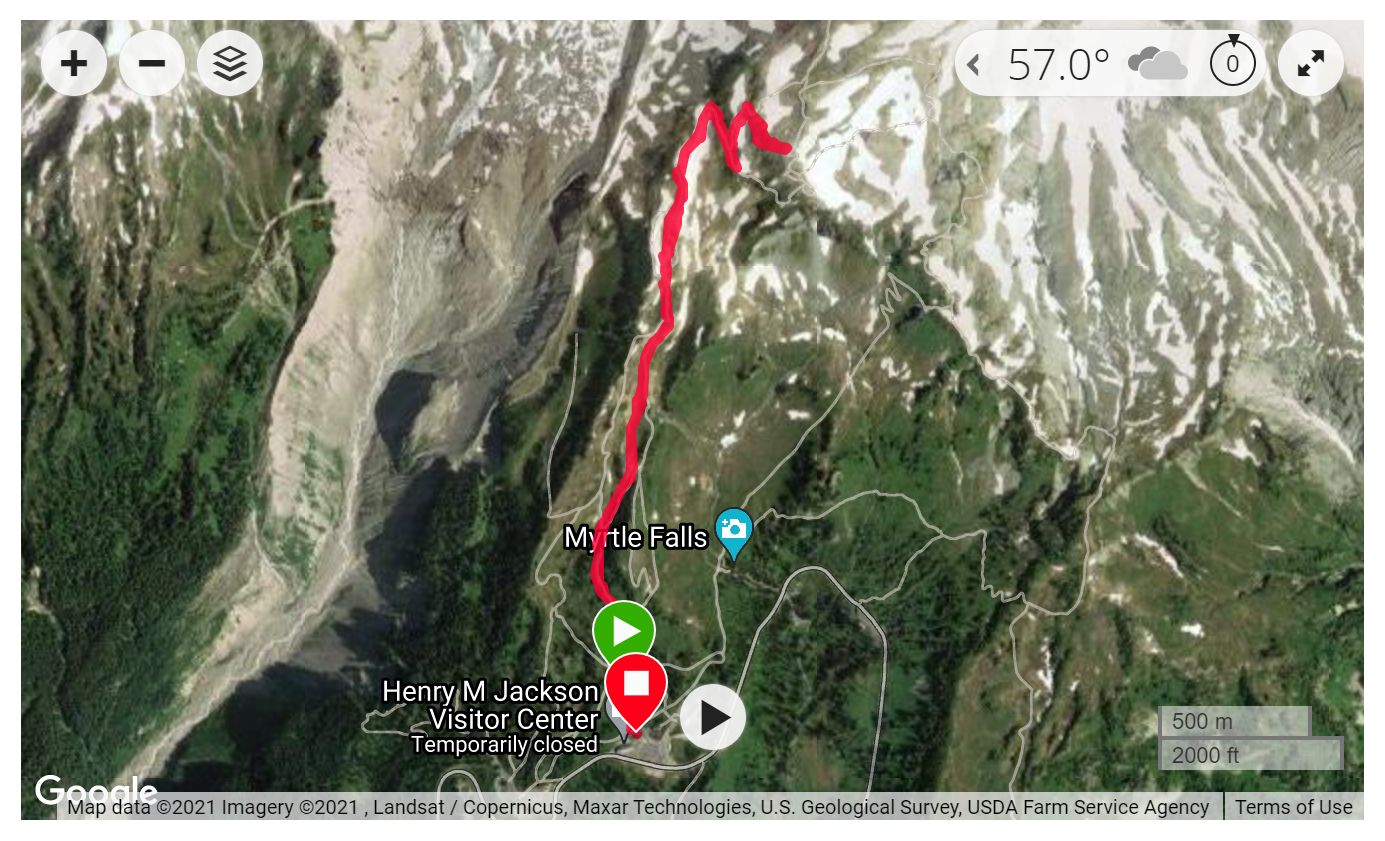