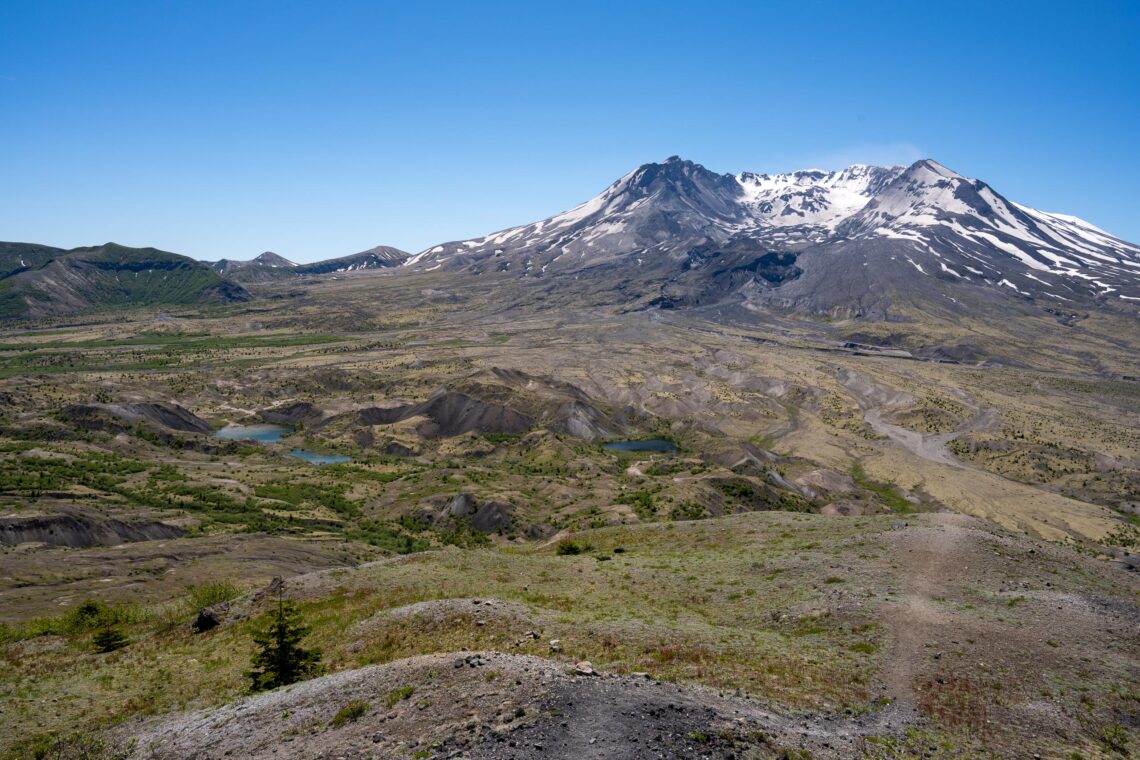 Mt. St. Helens was a bit of a haul from our place in Snohomish – three hours with no one on the road, and just over four at any time of day other than the hours between midnight and 5 a.m. But for me, a science and nature geek to the core, it was kind of a must-see while we were in Washington. Even though the drive was bit of a pain in the ass for a day trip, we couldn’t pass up the opportunity being just 150 miles from the volcanic massif. Moreover, it was the perfect time to drive down to Gifford Pinchot National Forest – we hadn’t hiked in a few weeks and I was becoming increasingly impatient waiting for the unfathomable amount of snow to melt in the Central and North Cascades. It turned out to be an excellent decision – with sweeping views of the volcano’s massive northern crater rim, this trail more than scratched the itch.

Mt. St. Helens’ eruption in 1980 was the most destructive volcanic event in U.S. history. The explosion killed 57 people and thousands of animals, decimated 230 square miles (600 km2) around the mountain, and caused more than $1 billion in damage (more than $3 billion today). Given the intensity and aftermath of the blast, it’s kind of amazing to think the eruption was considered ‘middling’ on a geological scale.

After being dormant for more than a century, Mt. St. Helens rumbled to life in March of 1980. For the next two months, seismic activity intensified, the mountain released a series of steam blasts, and a large bulge nearly a mile in diameter formed on the volcano’s north flank. When the volcano finally erupted on May 18th, the entire north side of the mountain collapsed. Lahars raced down the slopes with unimaginable force, and a plume of ash rocketed 15 miles high. In the hours and days after the eruption, 520 million tons of ash was blown eastward from the volcano, reaching the eastern U.S. within three days and circling the entire globe within two weeks.

Not only was the land around the cone decimated, but the mountain itself was also transformed. The lateral blast that blew out the northern flank of the peak created a cavernous crater more than a mile wide and over 2,000 feet (600 m) deep. The ice-capped summit that once soared to an elevation of nearly 9,700 feet was reduced in height by more than 1,300 feet. Today, the highpoint of the horseshoe-shaped amphitheater stands at just under 8,400 feet.

Wanting to get a glimpse of Mt. St. Helens’ yawning crater and volcanic landscape, we chose to hike out to Harry’s Ridge on the north side of the mountain. This wildly scenic prominence is named for Harry Truman. Not Harry S. Truman, of Presidential fame; but rather Harry R. Truman, a local legend in his own right. The latter Truman was a colorful character – a cantankerous codger whose biography sounds more like something from the pages of a great American novel rather than that of a simple man from rural West Virginia.

After a humble upbringing, Harry went on to become a WWI aeromechanic serving in France, a prospector, a Prohibition-era bootlegger, and ultimately the proprietor of an inn beside one of Washington’s most threatening volcanoes. In the late 1920s, Truman leased a large parcel of land from the Northern Pacific Railroad Company, where he built the Mt. St. Helens Lodge along the shores of Spirit Lake. Harry and his wife went on to run the lakeside retreat for the next fifty years. After his wife’s death in 1978, Harry became more reclusive, living alone at the lodge alongside his sixteen cats and collection of whiskey.

In 1980, when Mt. St. Helens began to show signs of an inevitable eruption, Harry vehemently refused to leave behind his beloved mountain and lake. From March to May, he rode out intermittent plumes of smoke and some 10,000 earthquakes that rumbled beneath the massif. While authorities insisted he evacuate, he stubbornly chided that they ‘couldn’t pull him out with a mule team.’ Living a mile from the cone, he didn’t think he was in any real danger and, really, I’m not sure he ultimately cared if he was. He was widowed, in his mid-eighties, and had lived quietly beside the smoldering peak for more than fifty years.

When Mt. St. Helens finally erupted with catastrophic force on May 18, 1980, the high-speed blast from the lateral eruption traveled at more than 300 mph (500 kph). The volcano’s northern flank collapsed in the explosion, generating the largest landslide in recorded history and burying the site of Harry’s Mt. St. Helens Lodge under some 150 feet of debris. Harry, expectedly, remained at his cherished lodge at the time of the eruption. He and his cats are believed to have perished instantly.

While it may seem tragic, for a man in his mid-80s who loved the mountain with all he had, I have to imagine he wouldn’t have wanted his story to end any other way. His foul-mouthed, no-nonsense, alcohol-loving, sensitive-soul-hidden-beneath-a-crusty-facade persona reminds me of my grandfather, and I kind of wish I could have met the old maverick. Today, two trails around Mt. St. Helens – the Truman Trail and Harry’s Ridge – honor the legacy of the eccentric old man who gave up his life for his mountain.

The hike out to Harry’s Ridge begins from the Johnston Ridge Observatory, named for a volcanologist killed in the 1980 eruption. Beginning along the Boundary Trail, the dusty, sun-drenched path follows a ridgeline around 4,000 feet in elevation just north of the towering stratovolcano. We were kind of unprepared for the magnitude of both the mountain and the views from here – from the second you step foot on the trail the panoramas of the gaping crater are nearly uninterrupted. 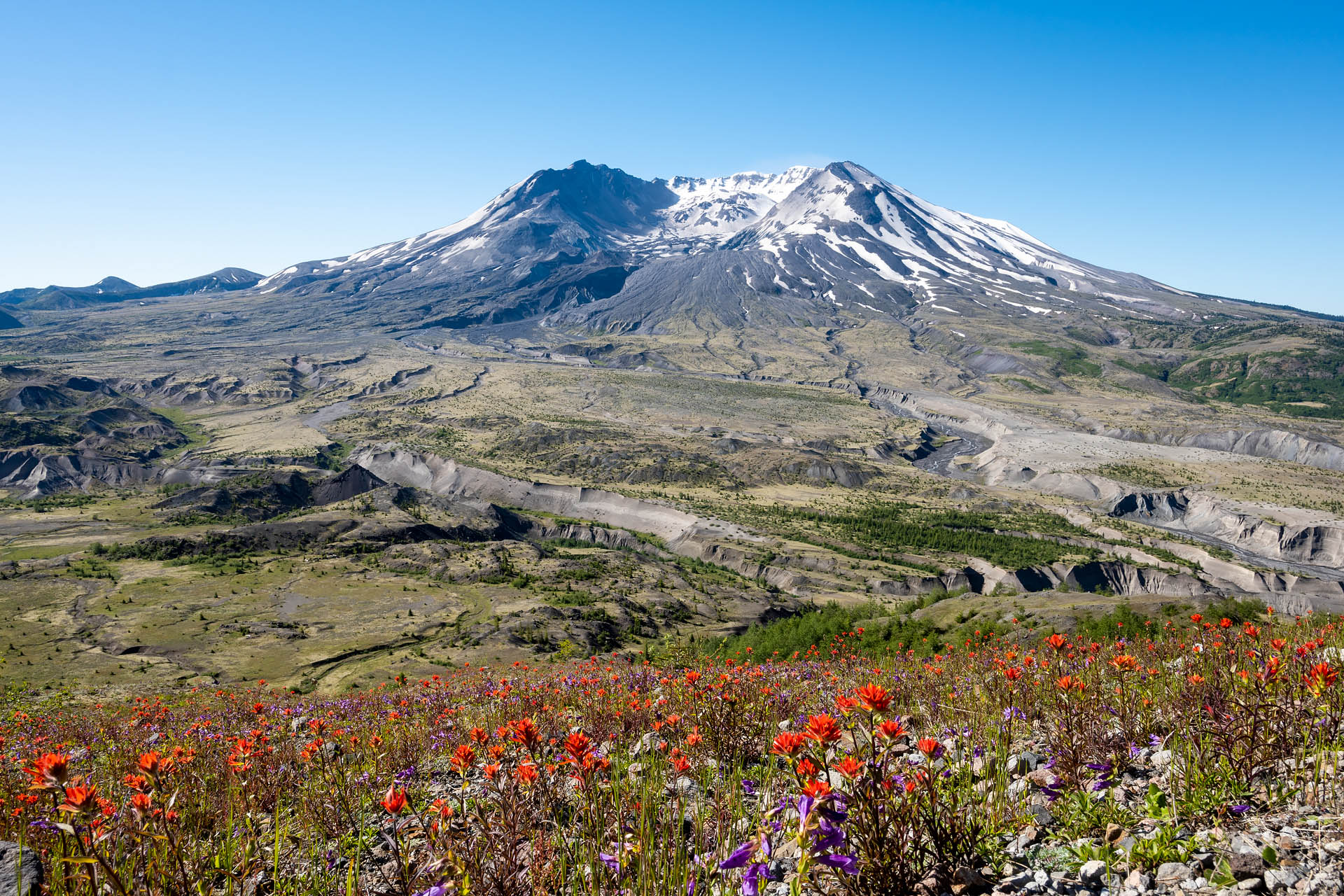 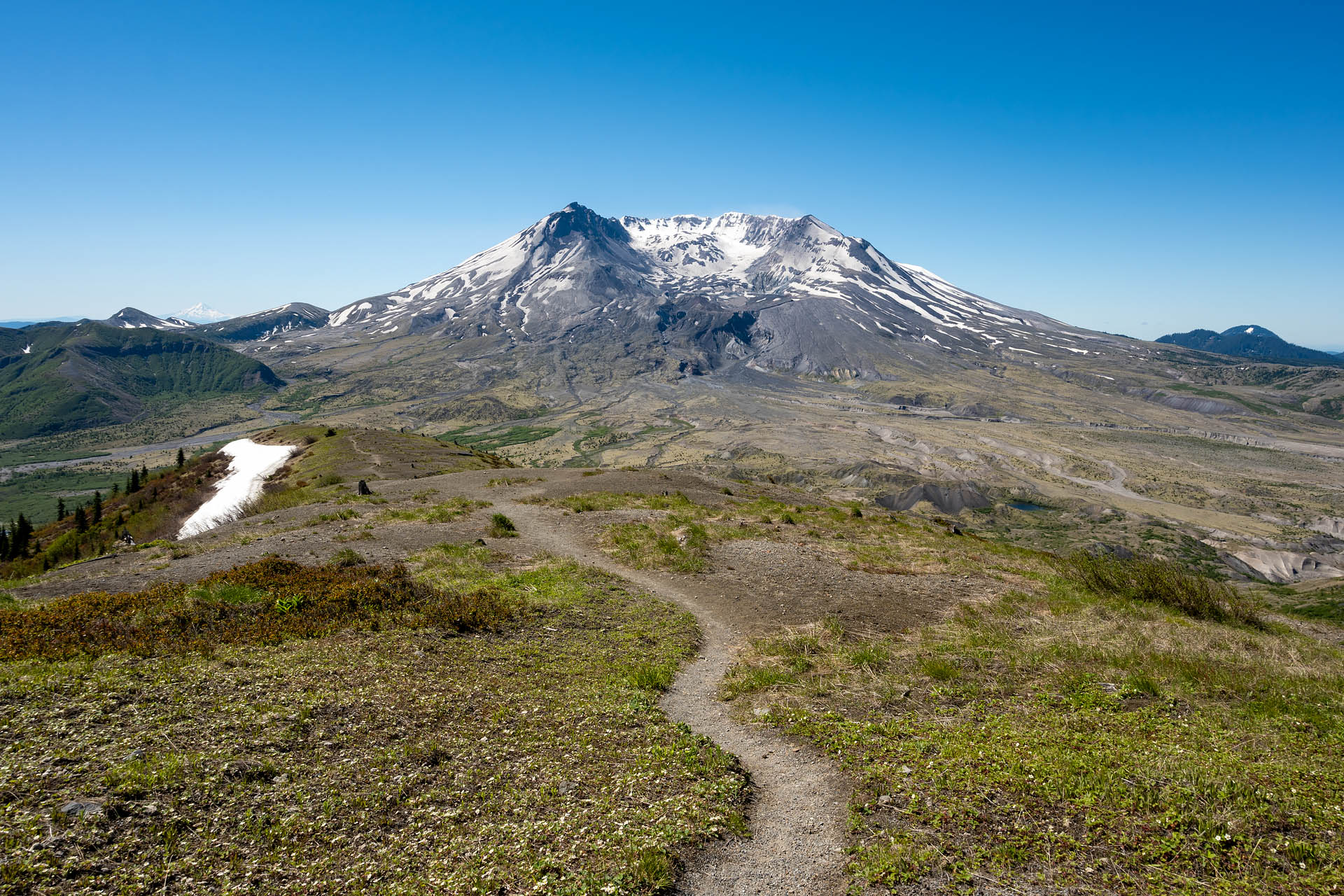 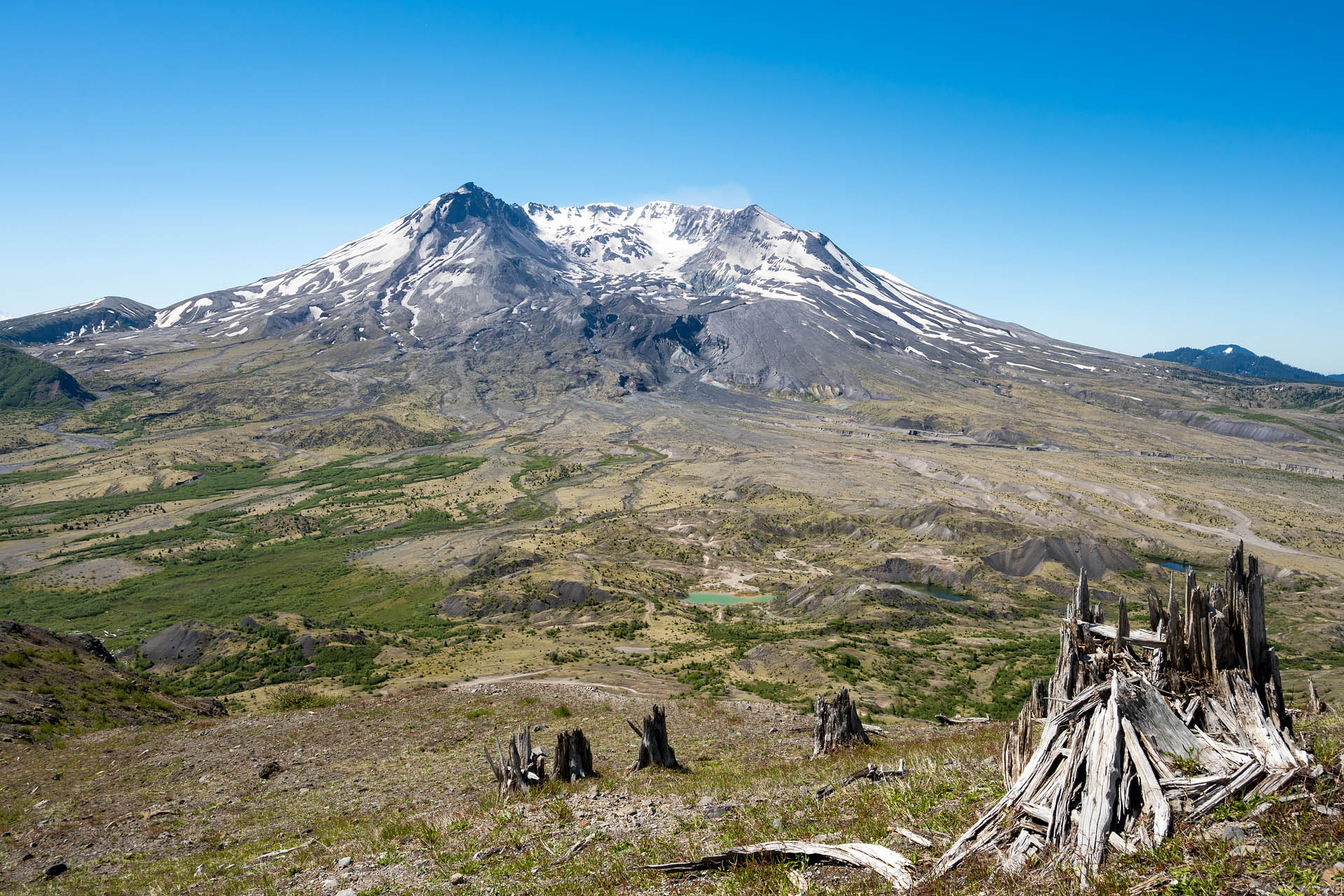 As we continued along the ridge, we ran into small pockets of wildflowers – delicate avalanche lilies and colorful paintbrush and penstemon – that intermittently turned our attention from the arresting caldera views. 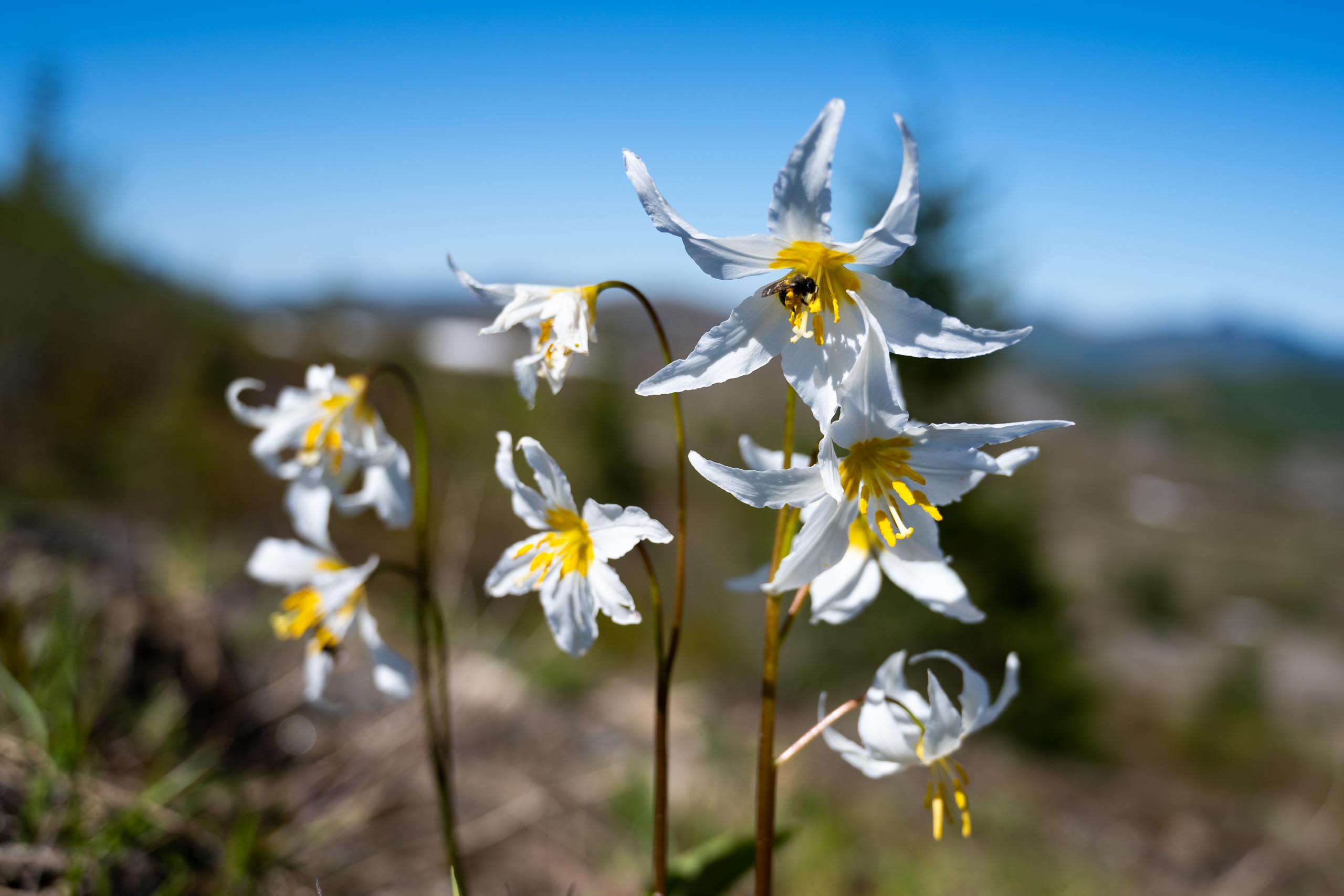 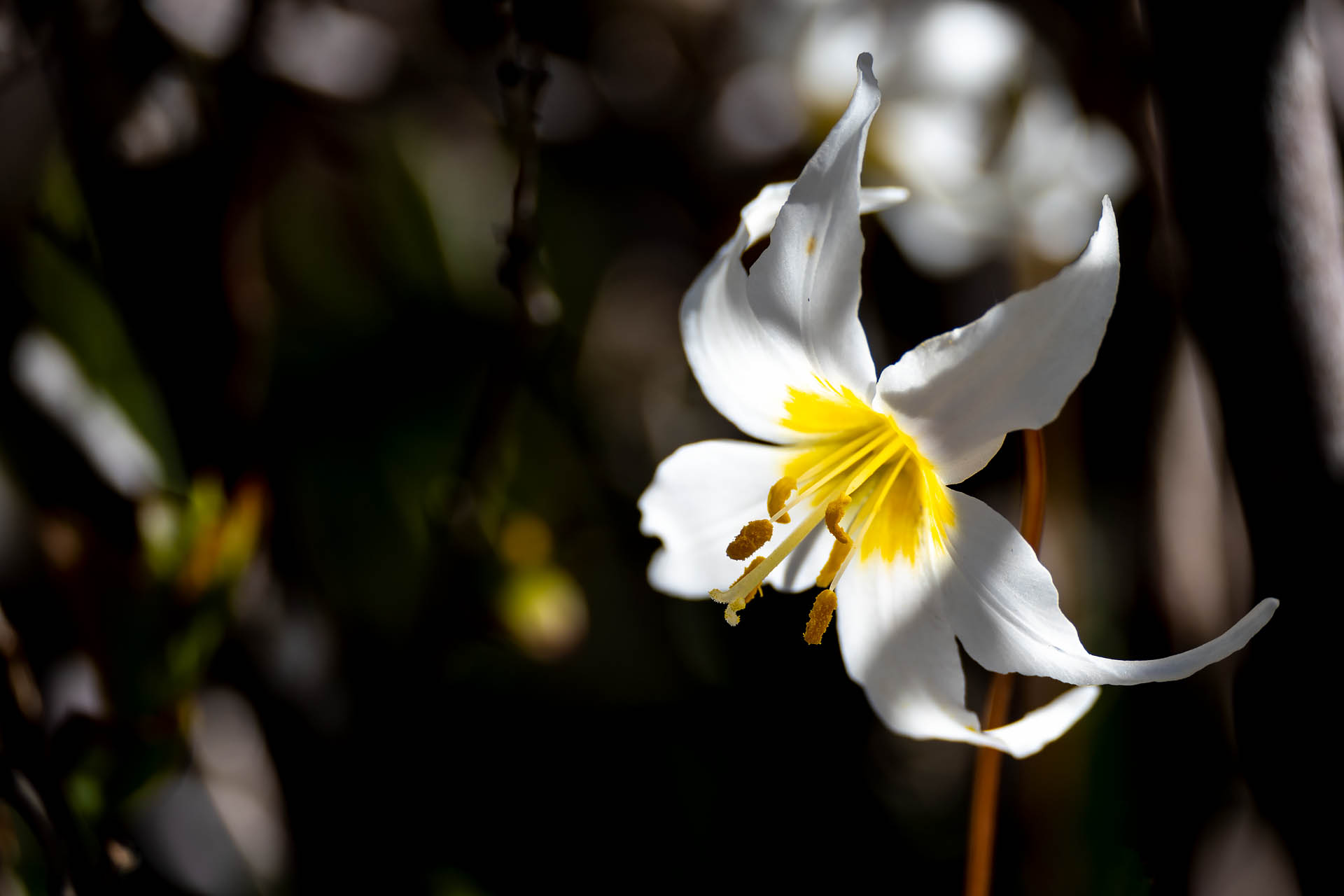 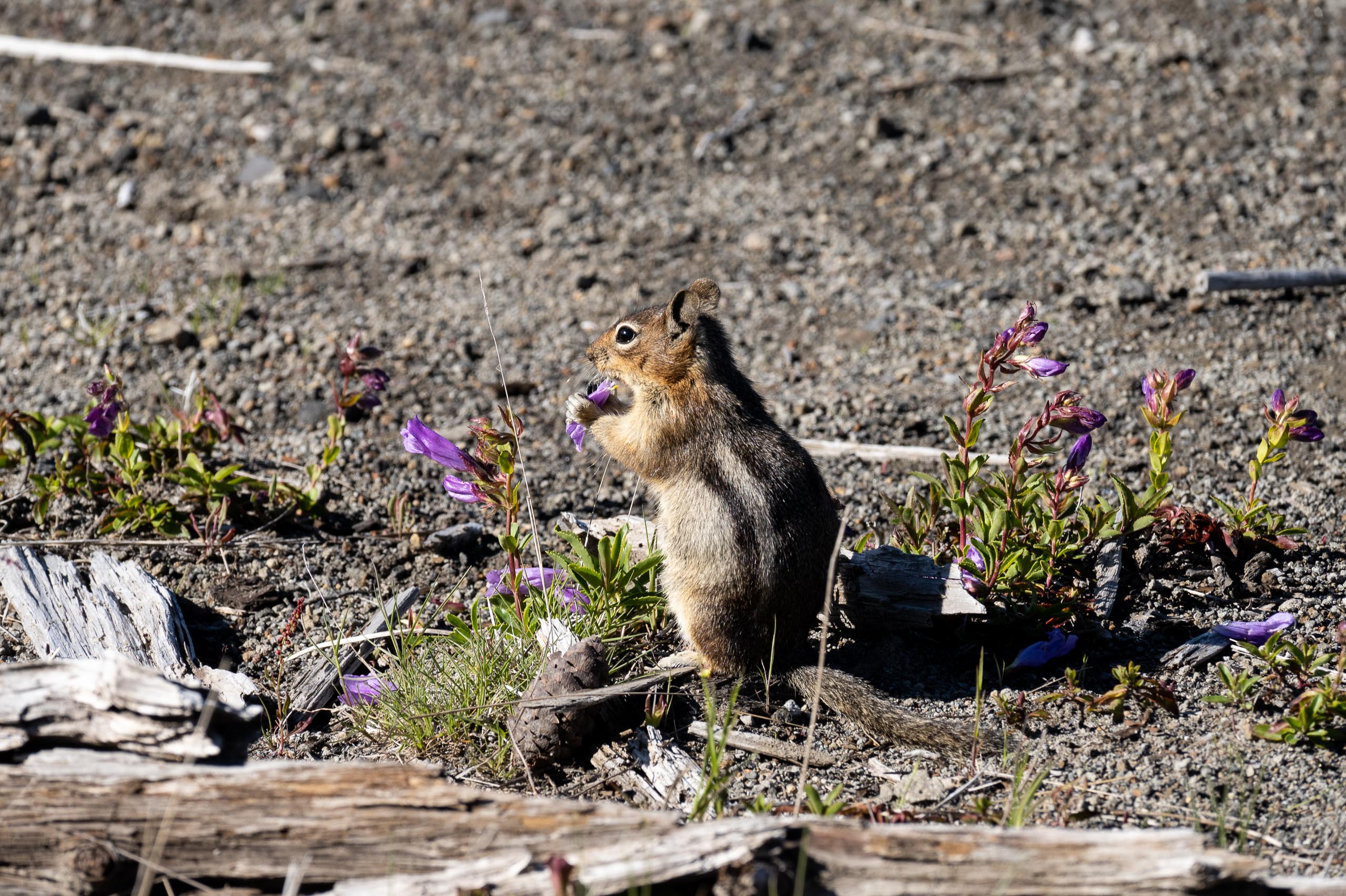 After three miles, the trail came to a junction. A hairpin turn to the south led a to a mile-long spur along Harry’s eponymous ridge. Running along the western shore of Spirit Lake with Mt. St. Helens’ crater due south, the ridge views here are exceptional, showcasing everything Harry loved about his treasured backcountry home. It was easily some of the most mesmerizing scenery we’ve ever seen. 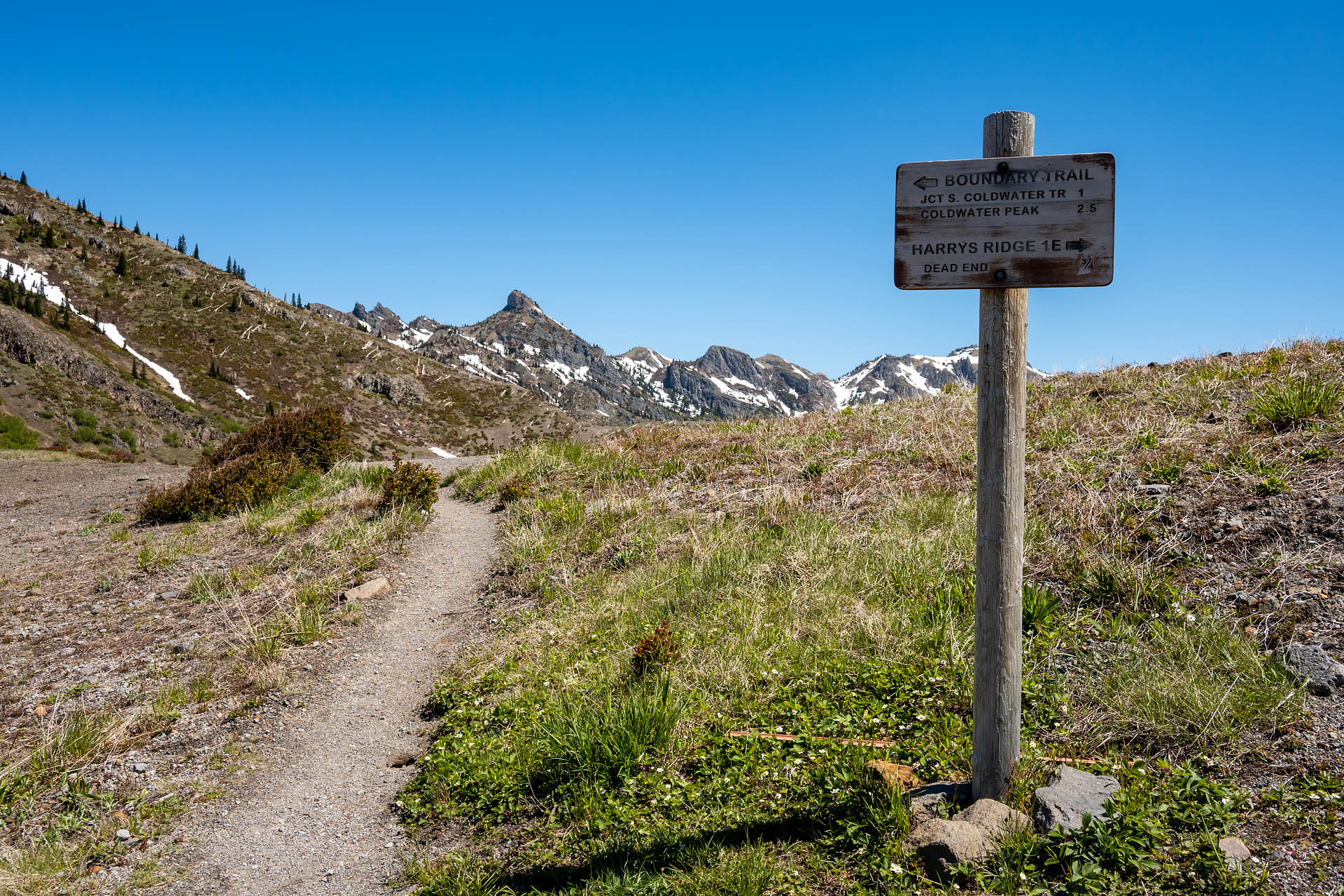 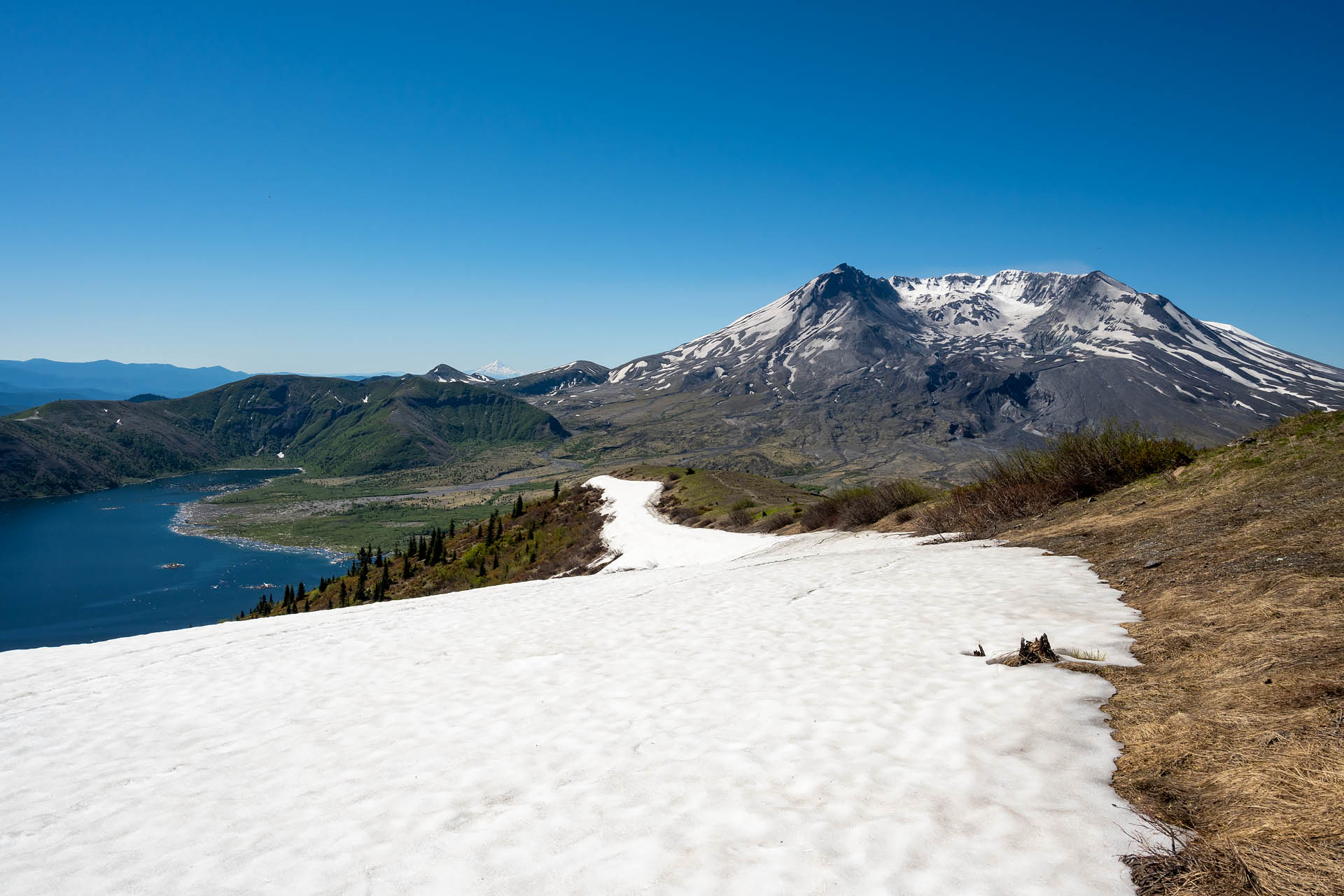 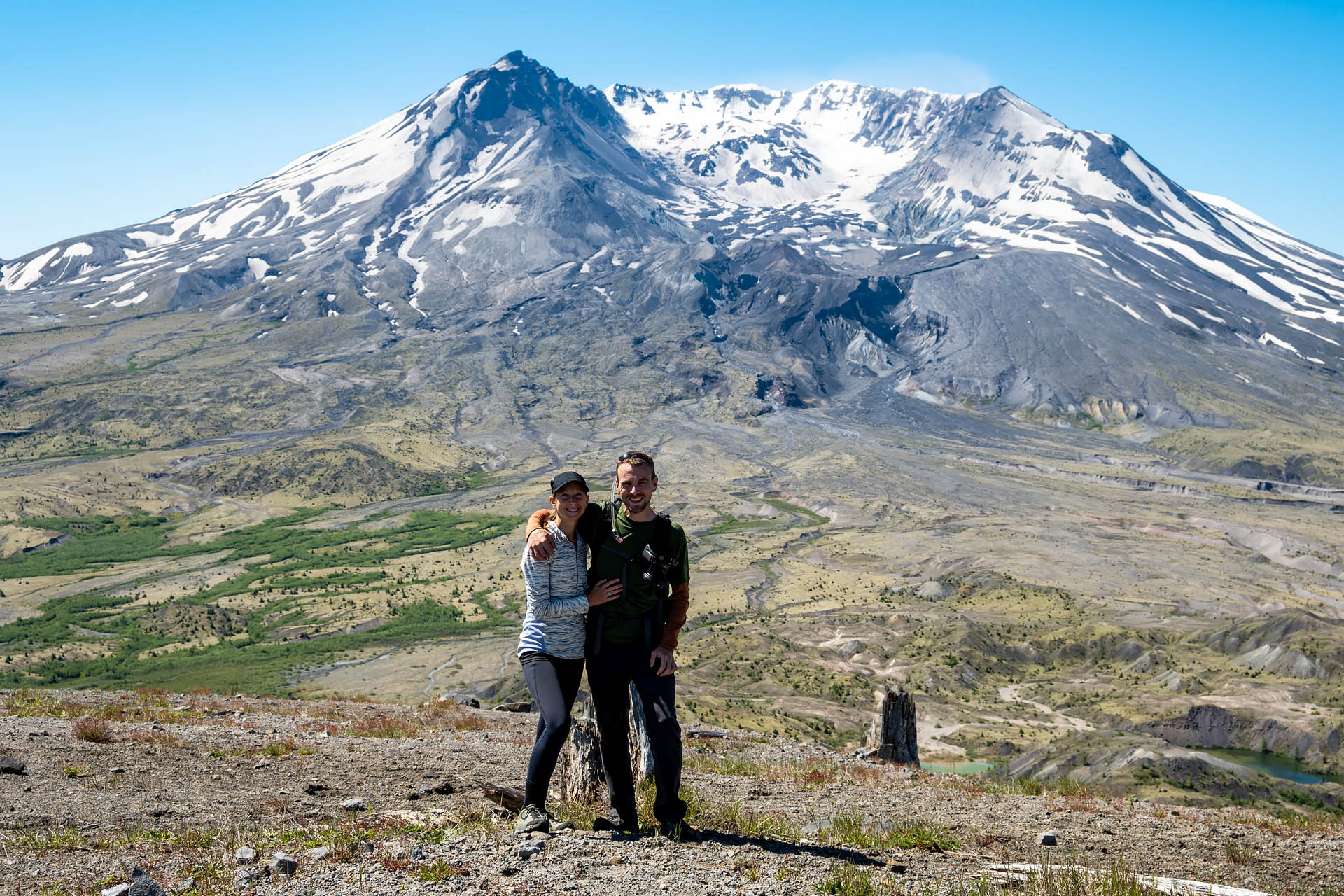 Of particular interest was Spirit Lake. Looking out over the sapphire water, we could see the thousands of logs that still float on the lake’s surface after the eruption – giving the appearance of a collection tiny matchsticks from atop the high ridge. During the 1980 eruption, Spirit Lake received the full impact of the blast. Millions of trees were blown off the forested hillsides during the eruption, and many ended up in the lake. What is more, the eruption’s cataclysmic force also sent water from the lake surging in 600-foot-high waves up the ridge to the north, dragging hundreds of thousands more trees back down to the water. It’s kind of astounding that more than forty years after the eruption, an enormous log mat of pyrolized trees still floats on Spirit Lake – a humbling reminder of nature’s incredible power. 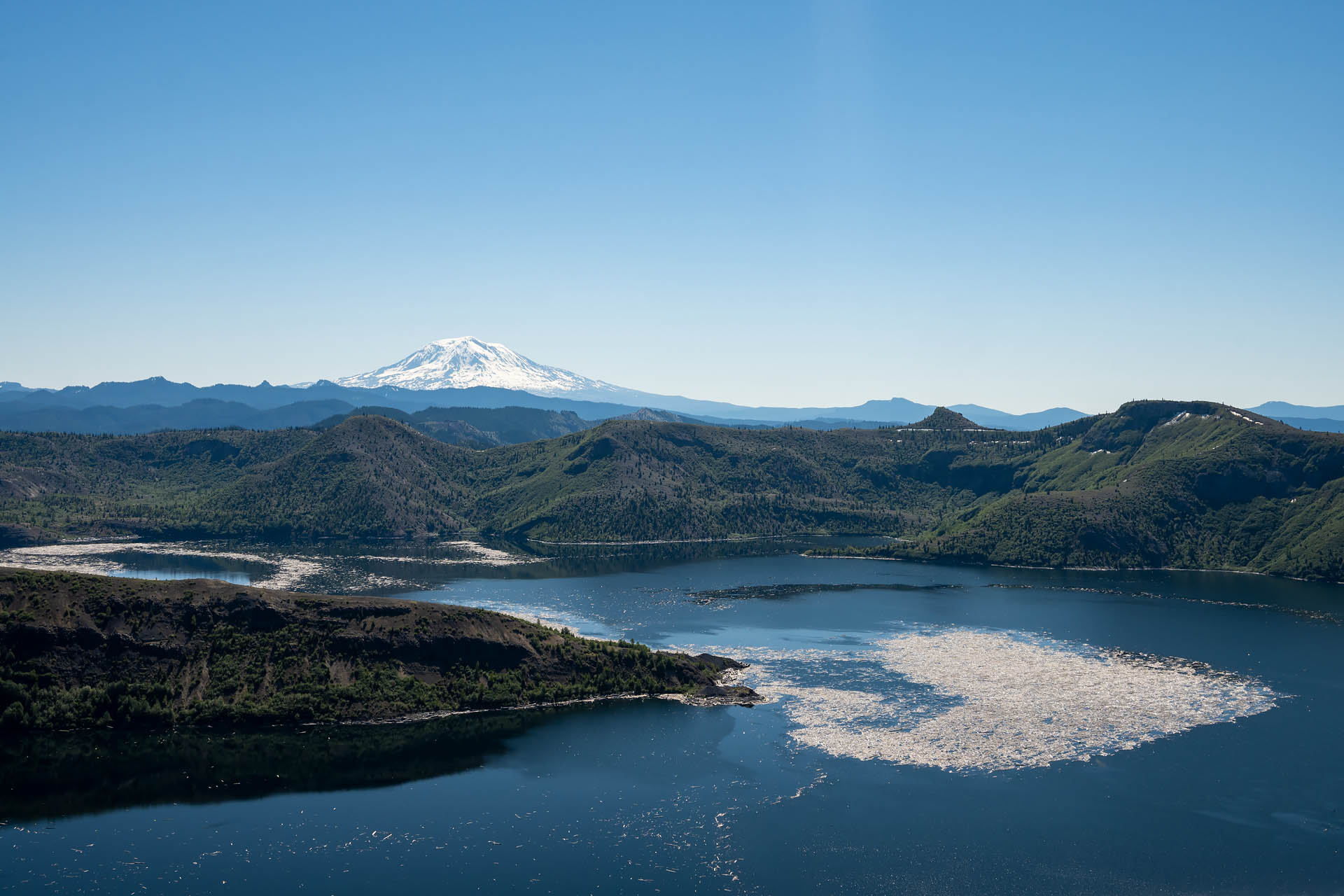 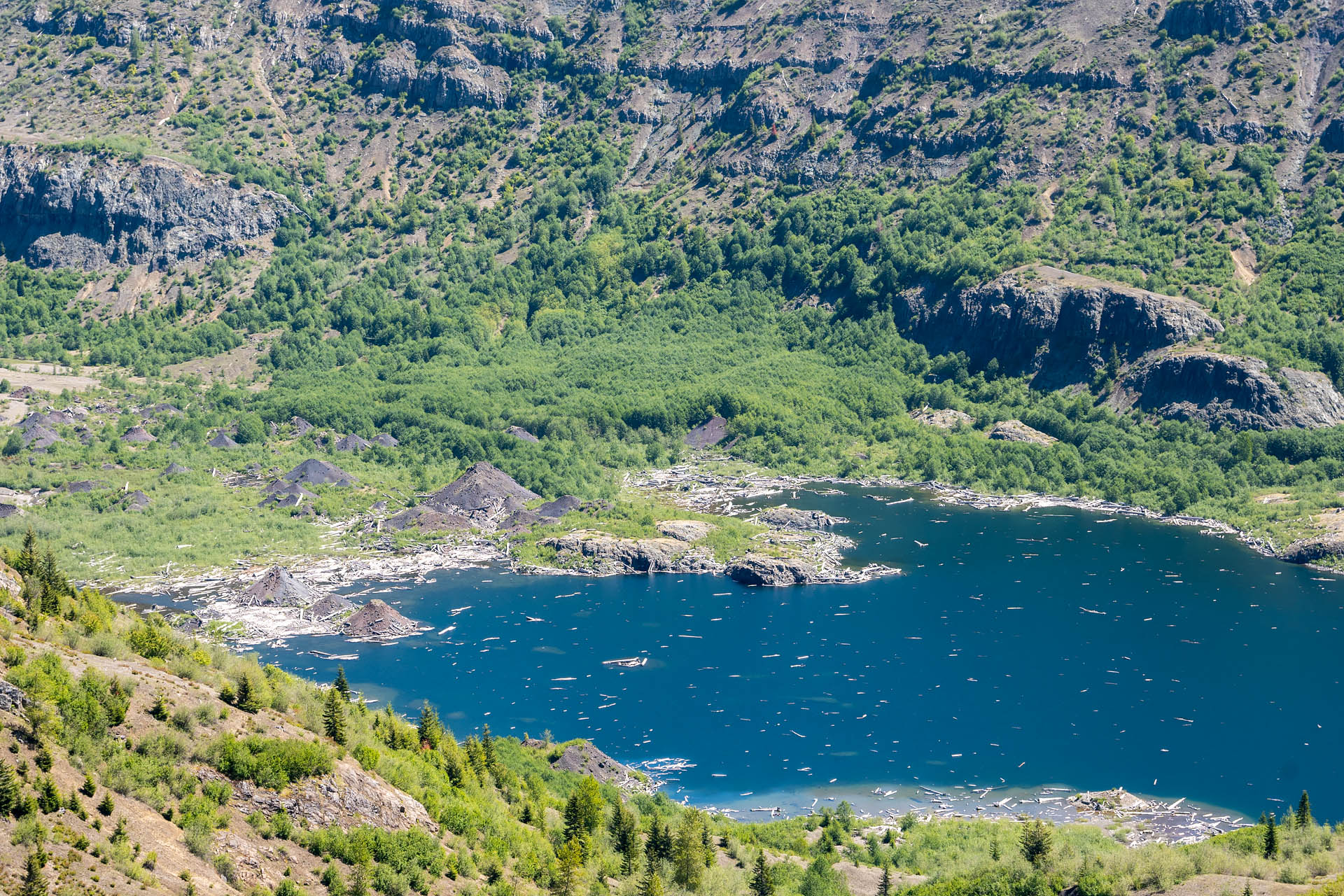 After at least an hour of sitting awestruck atop Harry’s Ridge, we finally made our way back to the trailhead. About halfway back, we took a short, half-mile spur trail out to Devil’s Point for one last vantage point of the dramatic peak. While we expected Mt. St. Helens would be pretty impressive to see in person, the hike out to Harry’s Ridge definitely exceeded all our expectations. It was so cool to look out on the incredible rebirth of the post-apocalyptic landscape, and just thinking about the power, beauty, and tragedy in everything that lay before us was kind of unbelievable. One of my favorite things about getting outside is that nature always has a way of surprising and humbling you. This journey, though, was on a totally different scale. 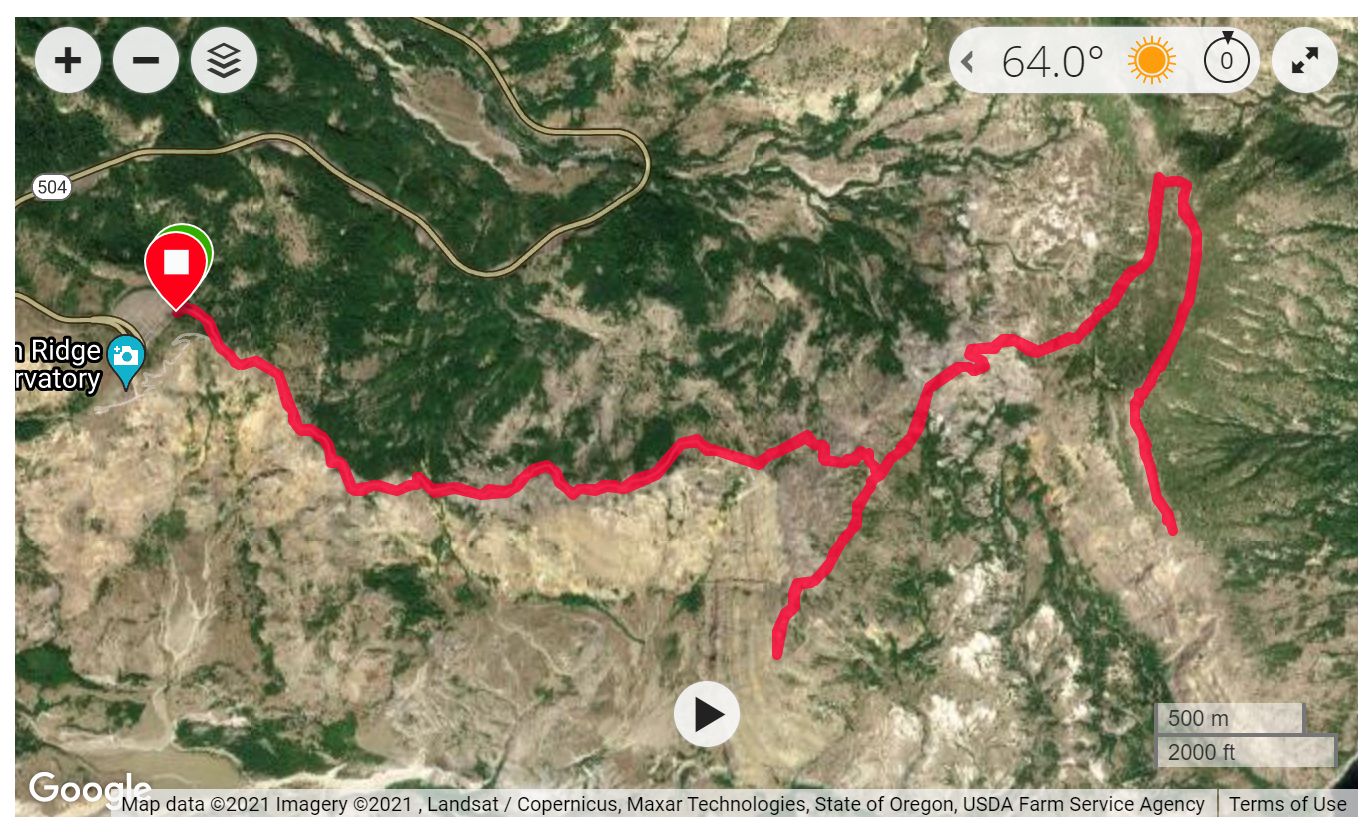 For all of you who totally geek out like I do over anything science-related, here are some articles and summaries I found particularly interesting: