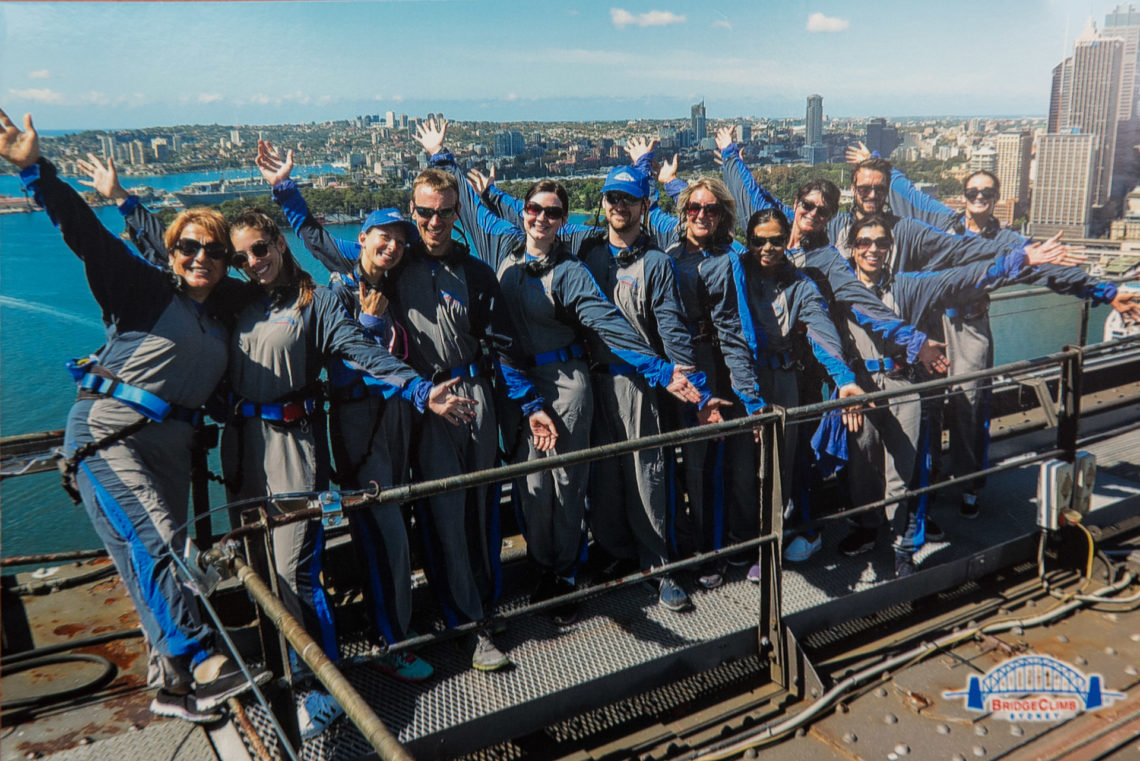 It seems that no visit to Sydney could really be considered complete without climbing the iconic Sydney Harbour Bridge. Is it expensive and seemingly overpriced? Yes. Is it something that thousands of tourists do on a weekly basis? Yes. Is it an exhilarating experience with a breathtaking view? Yes… and totally worth doing. 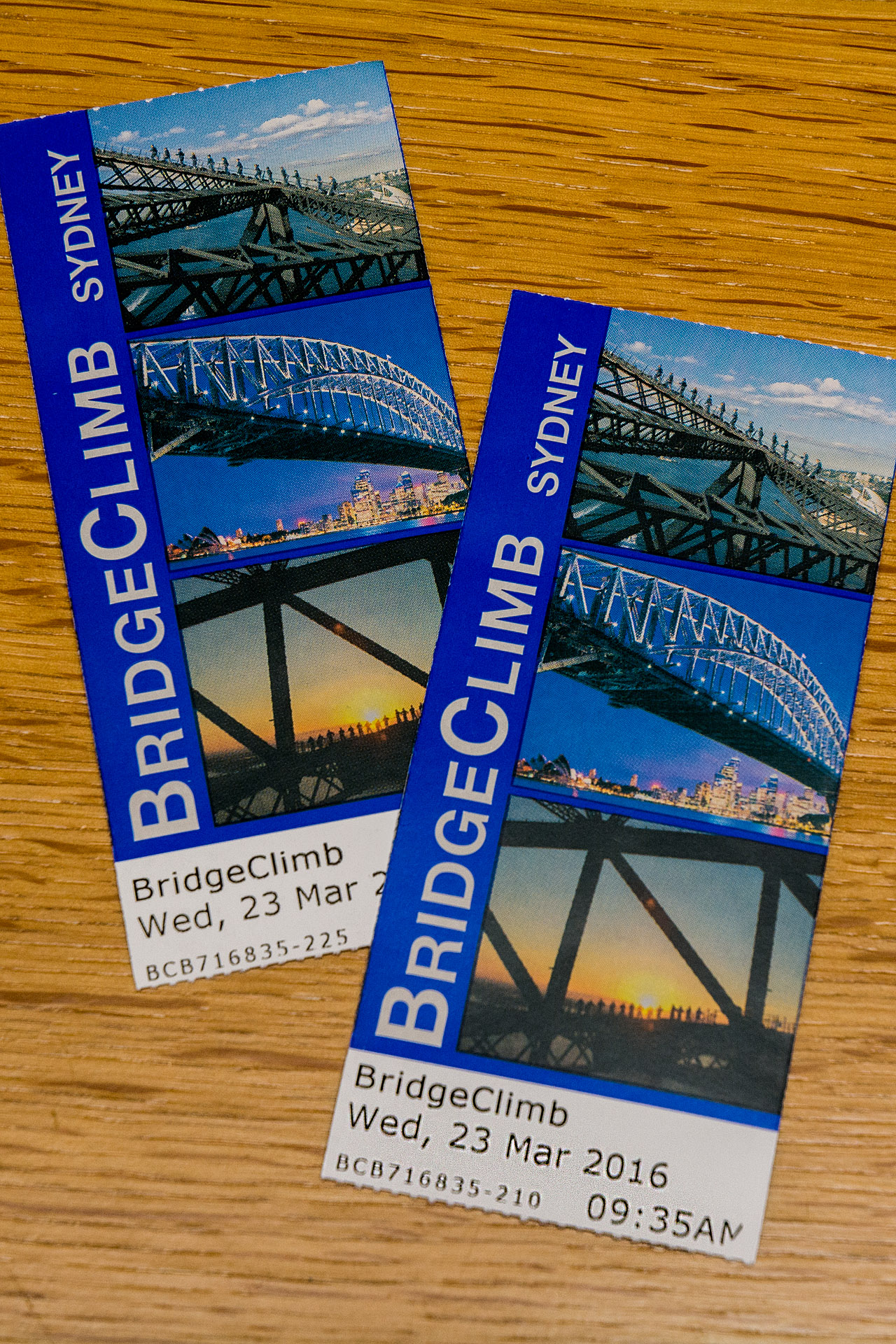 The entire bridge experience takes about 3.5 hours. After a quick briefing and breathalyzer test, you are stripped of anything that could potentially fall on traffic below – watches, bracelets, dangly earrings, even barrettes and bobby pins. You’re then shuttled through the next staging area, where you don your incredibly-attractive gray suit, safety harness, optional cap (clipped to your suit, of course), and radio. Following a quick practice on a small-scale ladder and walkway using the static line, you are then finally off to conquer the bridge. It was interesting – for the duration of the climb we never felt like we were really “climbing” anything. Near the start of the ascent, the walkway is a metal grate for about 40 meters, through which you can look down onto the eight lanes of traffic below. A series of four, steep, metal ladders then lead you up to the base of the arch. This is the only part of the climb that felt a little vulnerable, as the ladders are open and exposed. After this short portion, though, the entire walkway up the arch is a very gradual grade with fully-enclosed steel beneath your feet.

The view from the outer arch is breathtaking – to the east is the Opera House and Sydney Harbour, dotted with ships and sailboats. Looking back to the south, the massive skyscrapers of the central business district tower above the water. To the west is the more subdued Darling Harbour, with the Anzac Bridge rising in the distance. The climb is paced very slowly, with ample stops for taking in the panoramas en route to, as well as at, the summit – 134 meters (440 feet) above the water. After reaching the top of the arch, we took our obligatory group photo, crossed a catwalk to the other side of the bridge, and headed down along Darling Harbour. Alas, the photo below is the only one we have, as there’s a no camera policy (which is strictly enforced with metal detectors and wands), and we weren’t spending $25 on a terrible shot from the top (the group photo is free). But, I suppose without gazing through a lens we were really able to soak up the stunning views on what was an absolutely gorgeous day. 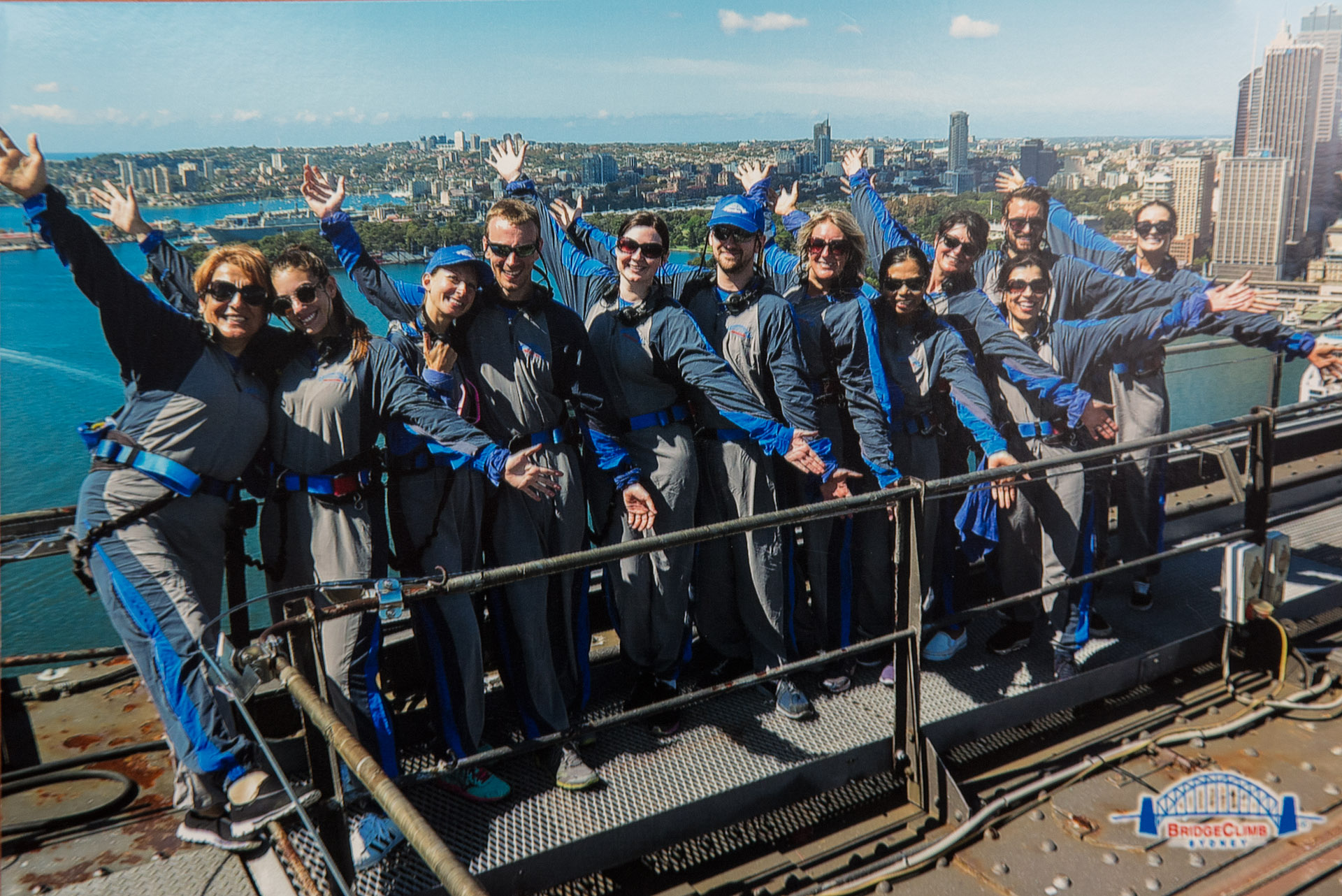 Throughout the climb, our guide, Steve, shared with us the incredible history of the bridge. I didn’t think I’d find it as interesting as I did, but Steve’s descriptions painted such a vivid image of the bridge’s construction. He talked extensively about the workers who, for eight years during the 1920s (1924–1932) worked tirelessly on the steel beams with no harnesses, safety gear, or ear protection. He talked of the rivet “holders,” whose job it was to climb inside the hollow beams, maneuvering a searing 1200°C rivet, while the riveter deafeningly hammered it into place above him. He described the furnace operators who, to pass rivets to workers on beams spanning the two arches, had to hurl the scorching pieces of steel through the air, each weighing some 2-3 kg (5-6 pounds). Accordingly, he emphasized the men who had to then catch the incoming fiery projectile, using a sand-filled bucket while perched precariously on the narrow beam. As he spoke, I looked out at the slender central scaffolding, and my stomach turned at the prospect of such a terrifying task. Surprisingly, there were only 16 deaths out of the thousands who toiled away on the world’s largest steel arch, each day risking their lives to make a good living for their families during a time of devastating economic depression. When you look at the bridge, you typically don’t look beyond the façade of a striking piece of engineering… but learning the story of its creation gives an intense appreciation of what the massive span truly stands for. 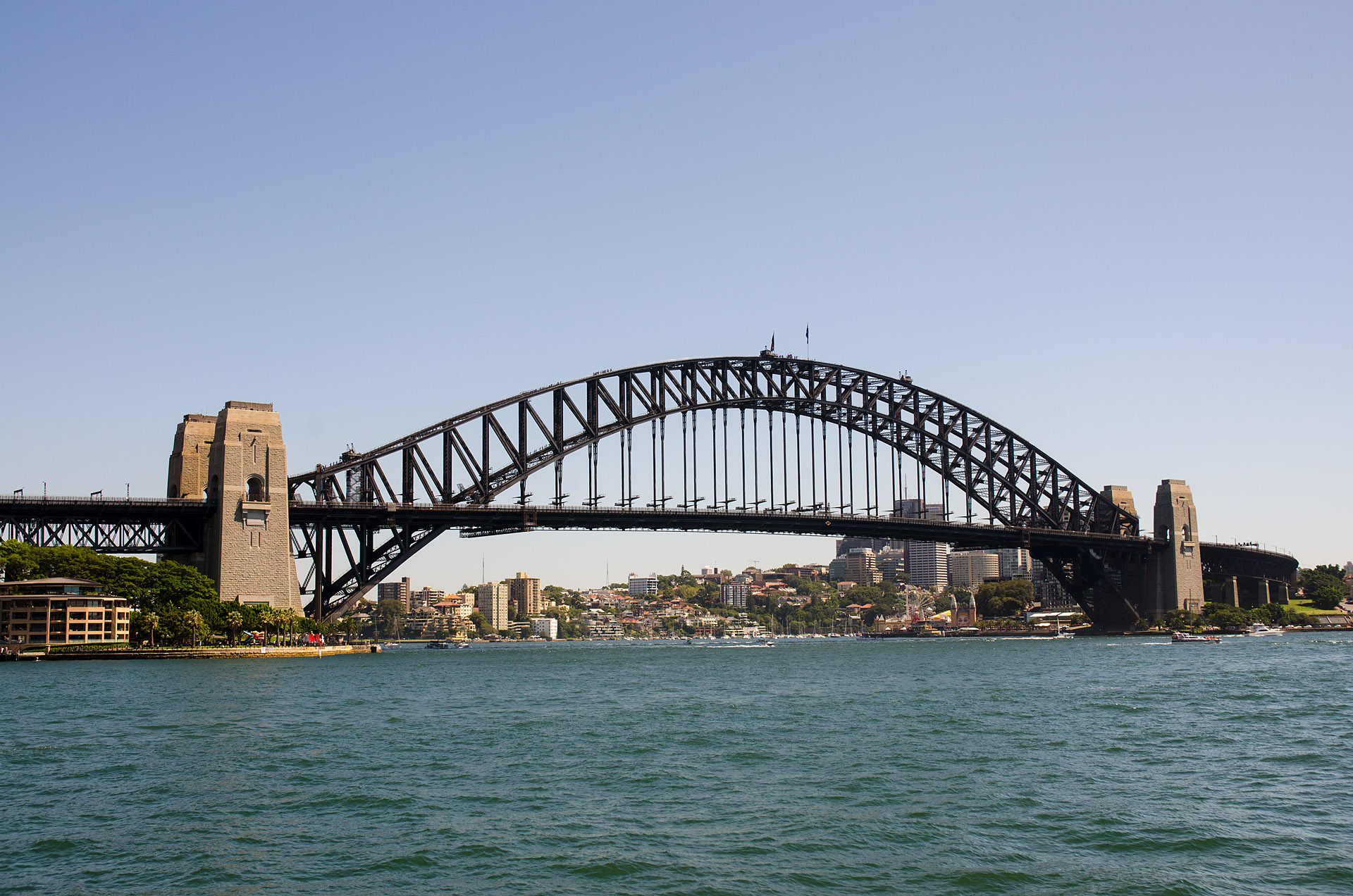 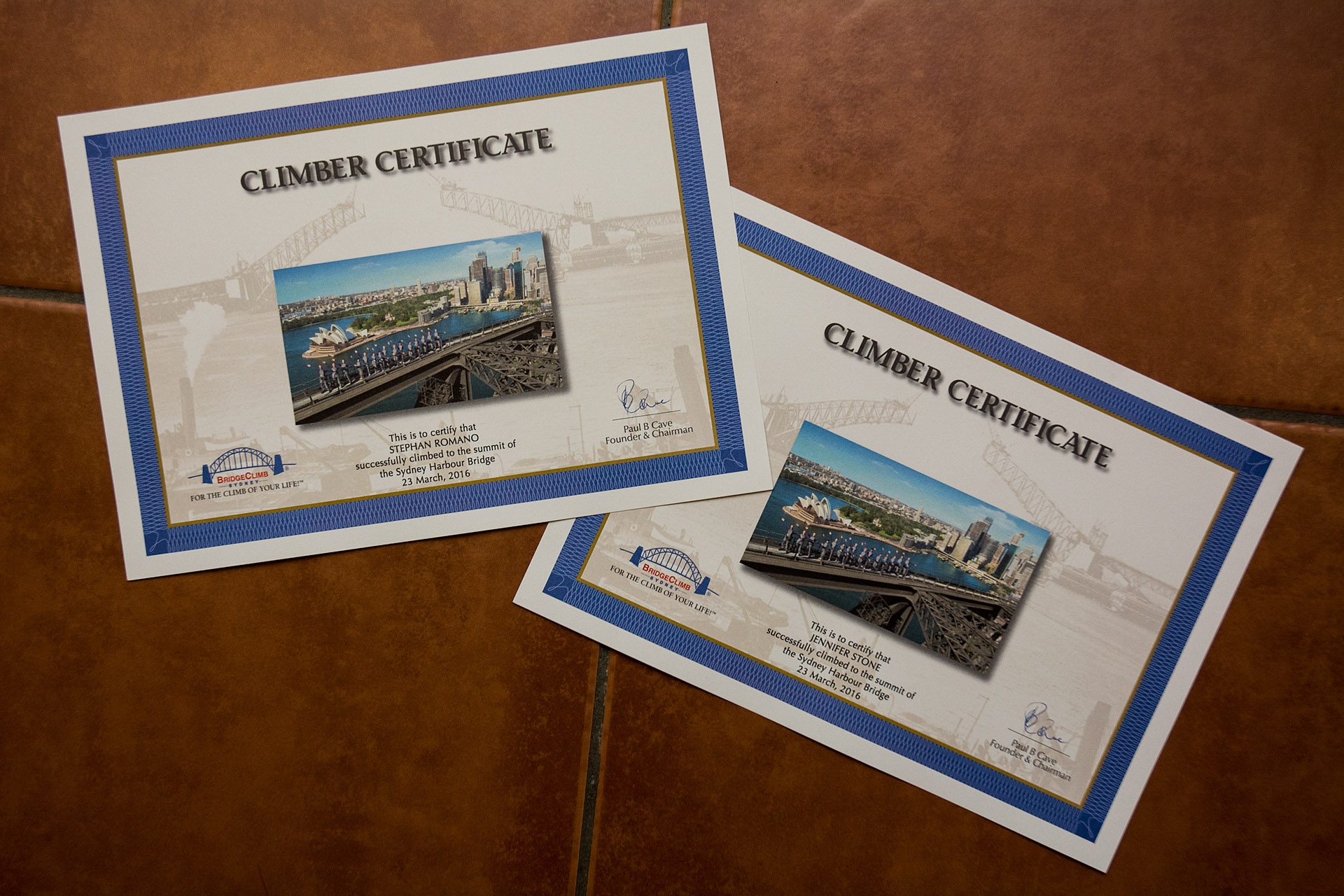