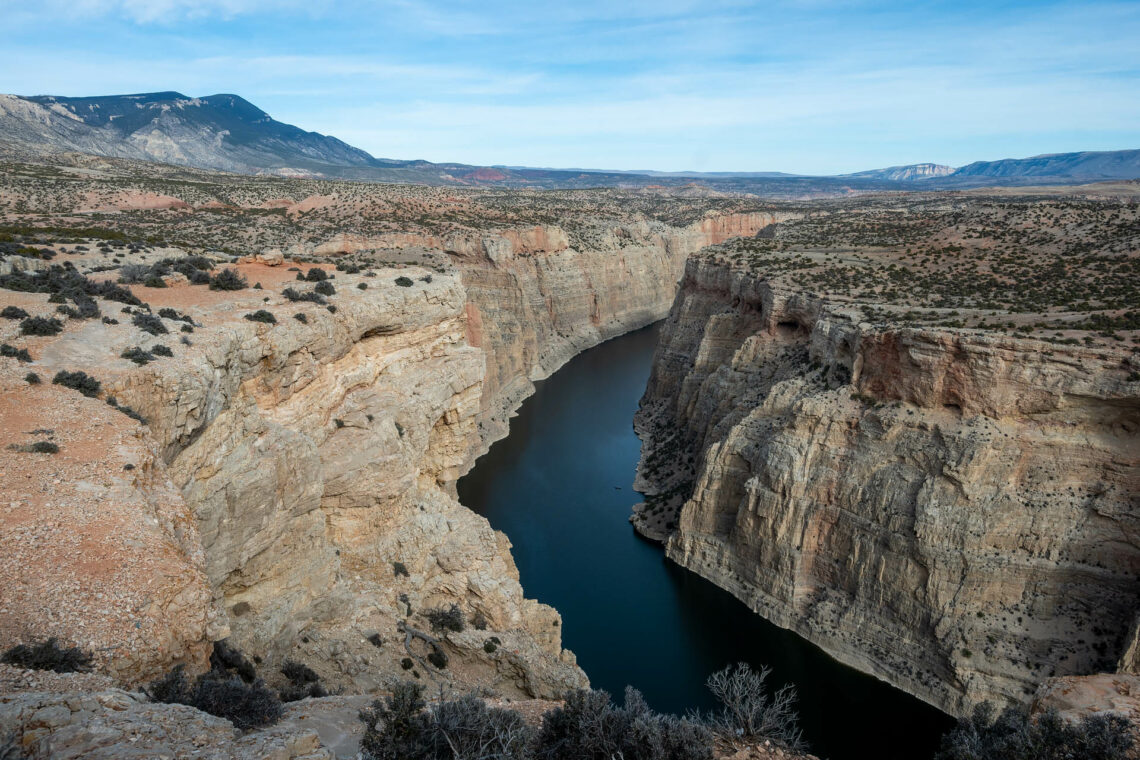 Straddling the Montana-Wyoming border, Bighorn Canyon slices through fifty-five miles of sagebrush desert between the Bighorn and Pryor Mountains. Its colorful walls are made up of Madison limestone (320 to 350 million years old) and rise between 1,000 and 2,500 feet above the snaking Bighorn River and Bighorn Lake. The vast landscape is protected by the Bighorn Canyon National Recreation Area, which spans a whopping 68,000 acres in southern Montana and northern Wyoming. 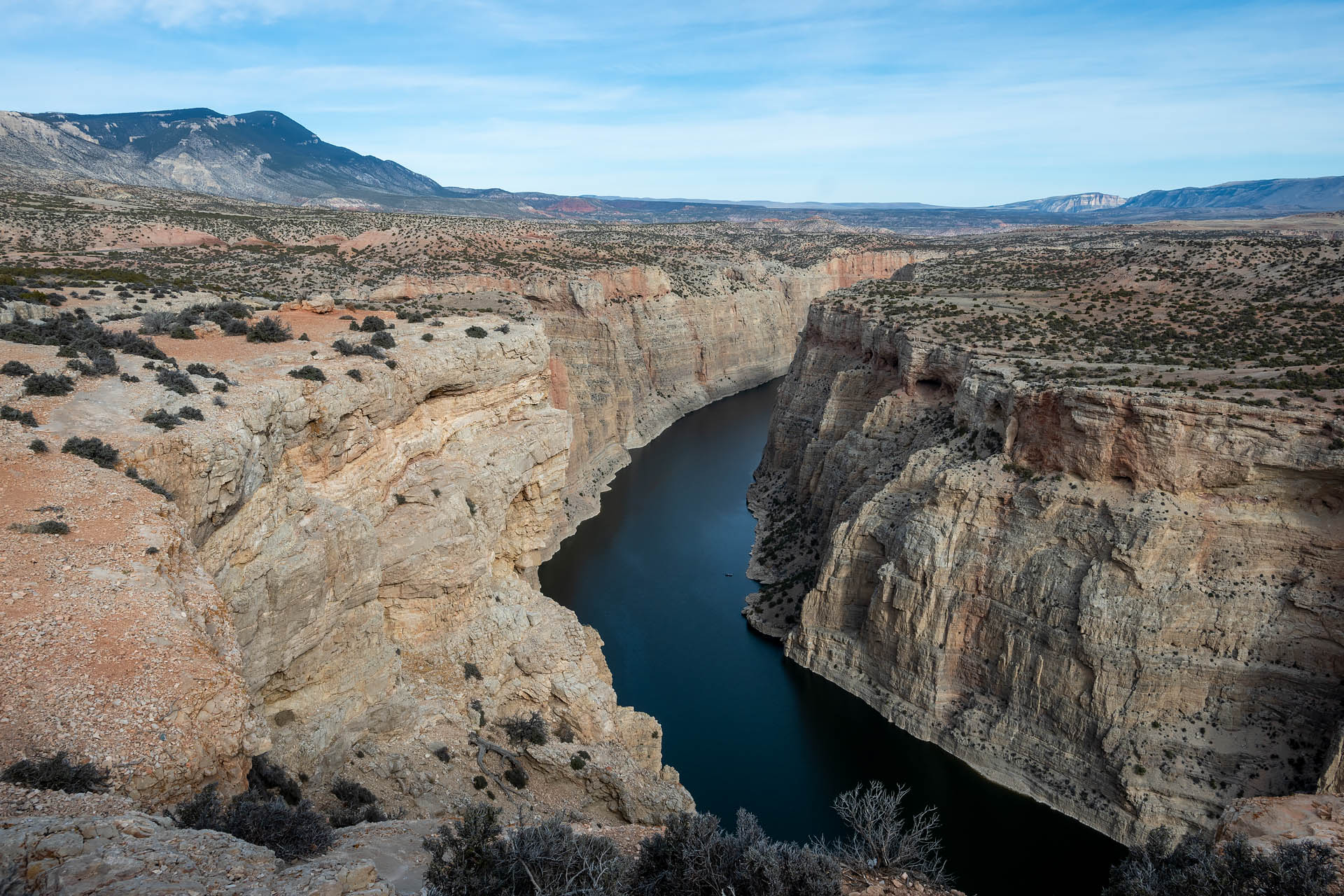 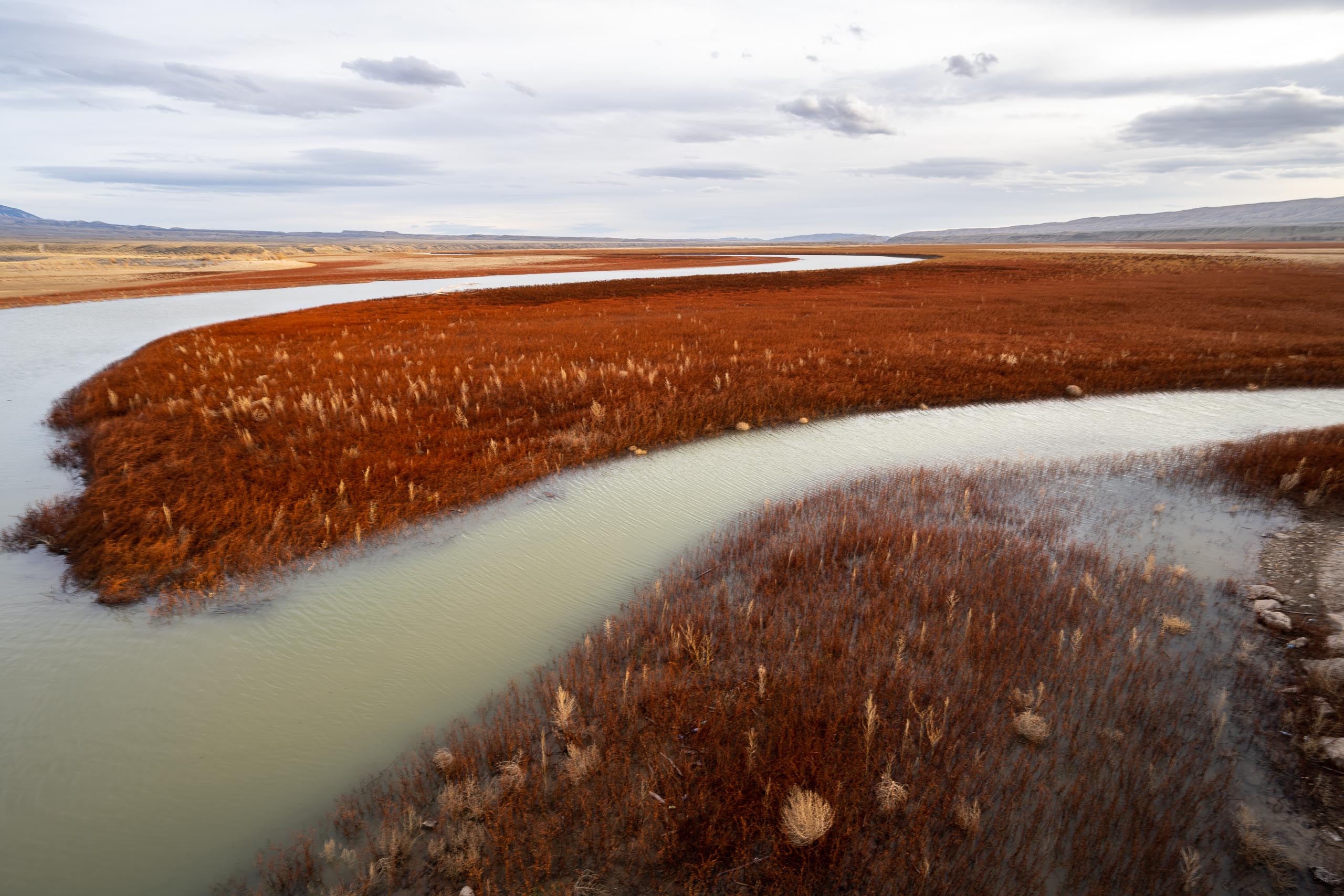 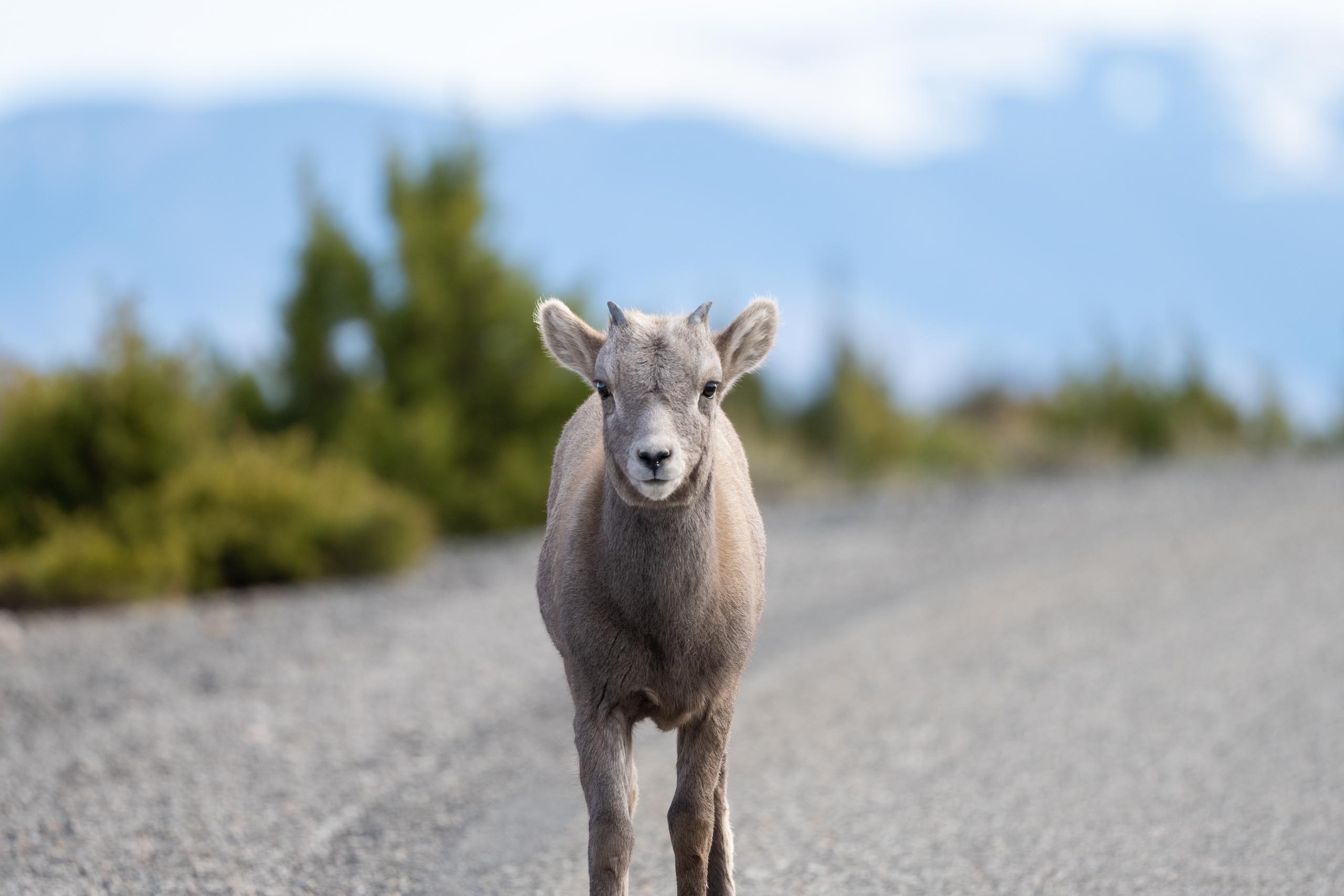 What looks like a river winding through the bottom of the gorge is actually Bighorn Lake – a 71-mile-long reservoir that was created as a result of the construction of Yellowtail Dam. Built in the mid-1960s at the mouth of the canyon, the dam has proven beneficial for flood control, irrigation, and power generation. That said, many justly opposed the dam’s construction. Ironically, one of its most fervent opponents was the dam’s namesake, Crow leader Robbie Yellowtail. Bighorn Canyon was considered sacred to the Crow people, and Yellowtail fought vehemently to prevent the government from seizing tribal lands and flooding the canyon. In the end, however, the tribal council was defeated. The Crow were compensated marginally for their land, and left with what only seems like an oddly insensitive tribute to one of the tribe’s most dedicated activists.

Although it’s the third largest canyon in the country, Bighorn Canyon sees significantly fewer visitors than the more popular Grand Canyon and Bryce. Surprisingly, we found it to be quite the hidden treasure. It’s hard to get a lot of hiking distance here, as there are only a handful of short trails totaling about fifteen miles. However, it’s a really beautiful and seemingly overlooked spot. The best part for us was that we saw maybe five other people the entire day.

To try and maximize our exploring, we chose four trails along the western rim of the canyon. The little patchwork of routes allowed us to take in a number of unique views of the canyon while piecing together about six miles of trail.

Undoubtedly the recreation area’s most recognizable viewpoint, Devil Canyon Overlook sits along the canyon’s west rim. About three miles north of the Montana-Wyoming border, the overlook can be easily reached via Big Horn Canyon Road (Highway 37). This thoroughfare parallels the western lip of the canyon, largely following a historic track known as the Bad Pass Trail (or Sioux Trail). The rugged path was used by Native Americans as early as 10,000 to 12,000 years ago to access bison hunting grounds along the present-day Montana/Wyoming border. In the 19th century, the trail was used widely by fur traders and Mountain Men. Today, only a few cairns and fading vestiges of the trail remain, with much of the abandoned route being replaced by the modern access road.

Unlike in centuries past, no hiking is now required to reach Devil Canyon Overlook. The easily accessible spot overlooks a scenic gooseneck in Bighorn Lake where Madison Limestone cliffs plummet 1,000 feet to the water below. 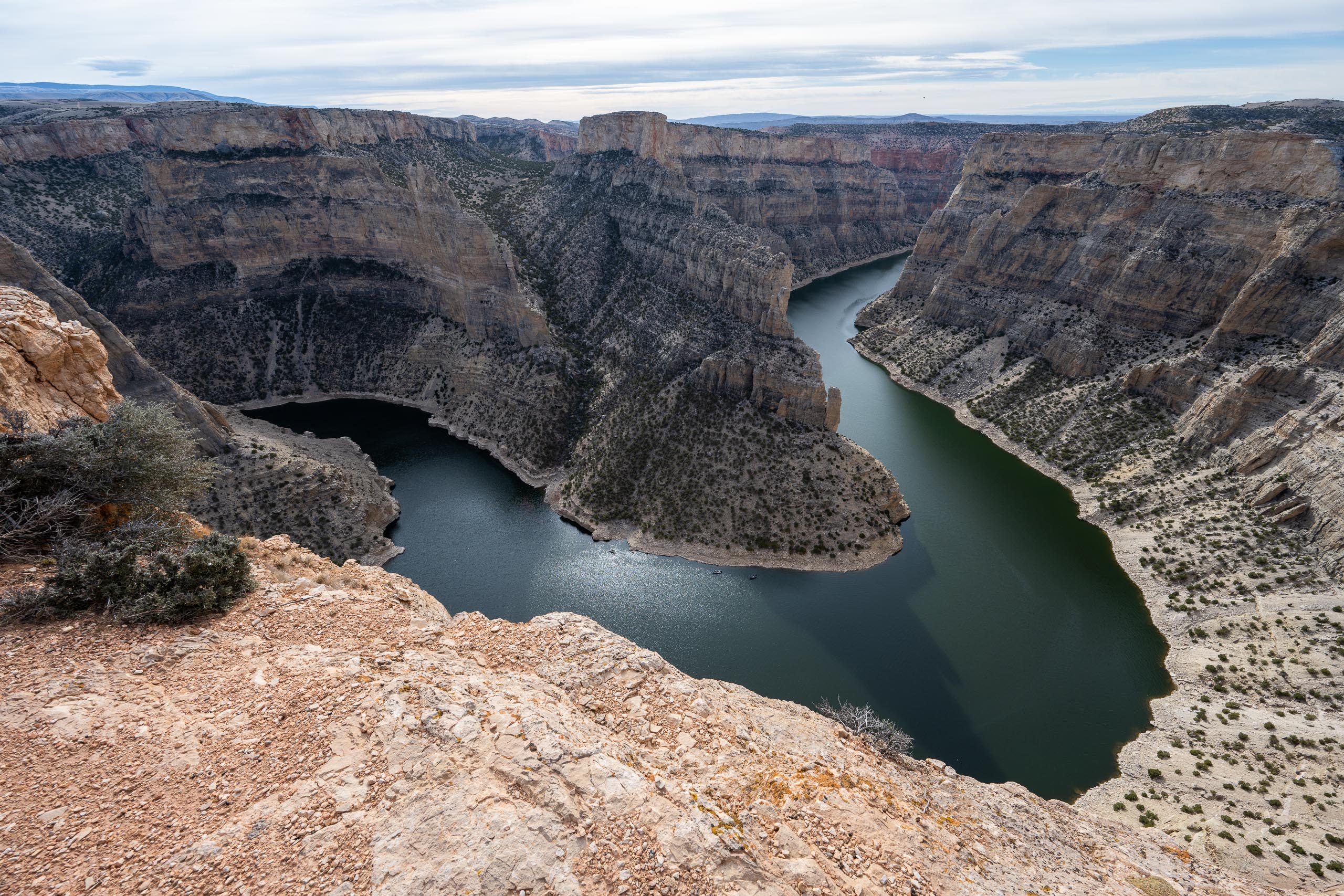 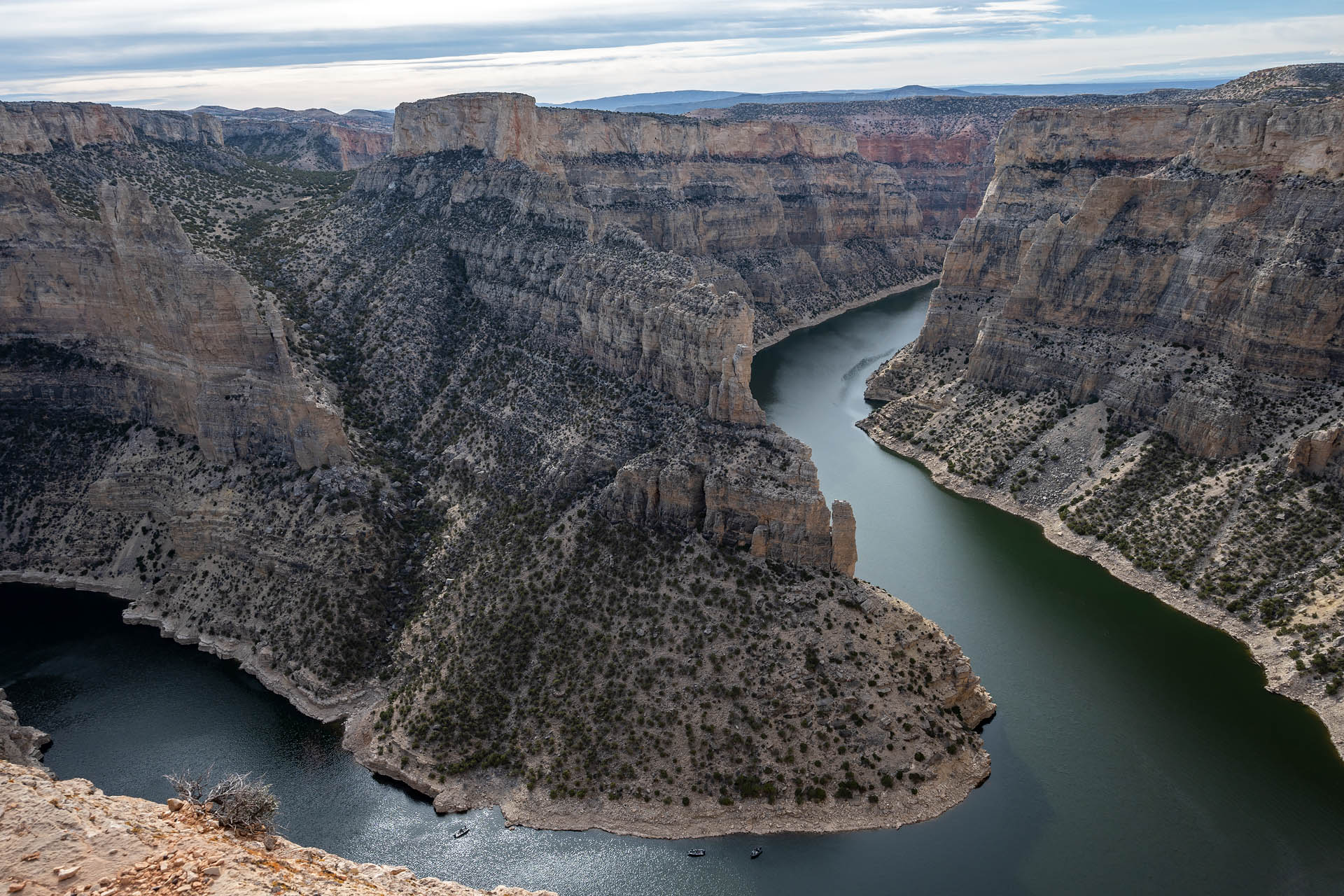 In addition to the view, Devil Canyon is also a prime location for spotting bighorn sheep. Given my love for all things hooved and herbivorous, I was hopeful we’d see one or two. When we found ourselves unexpectedly amongst a herd of about twenty-six, including a handful of lambs, I was beyond elated. We sat there for at least an hour watching them graze. Had they not eventually moved on into the sagebrush, I probably could have sat there all afternoon. 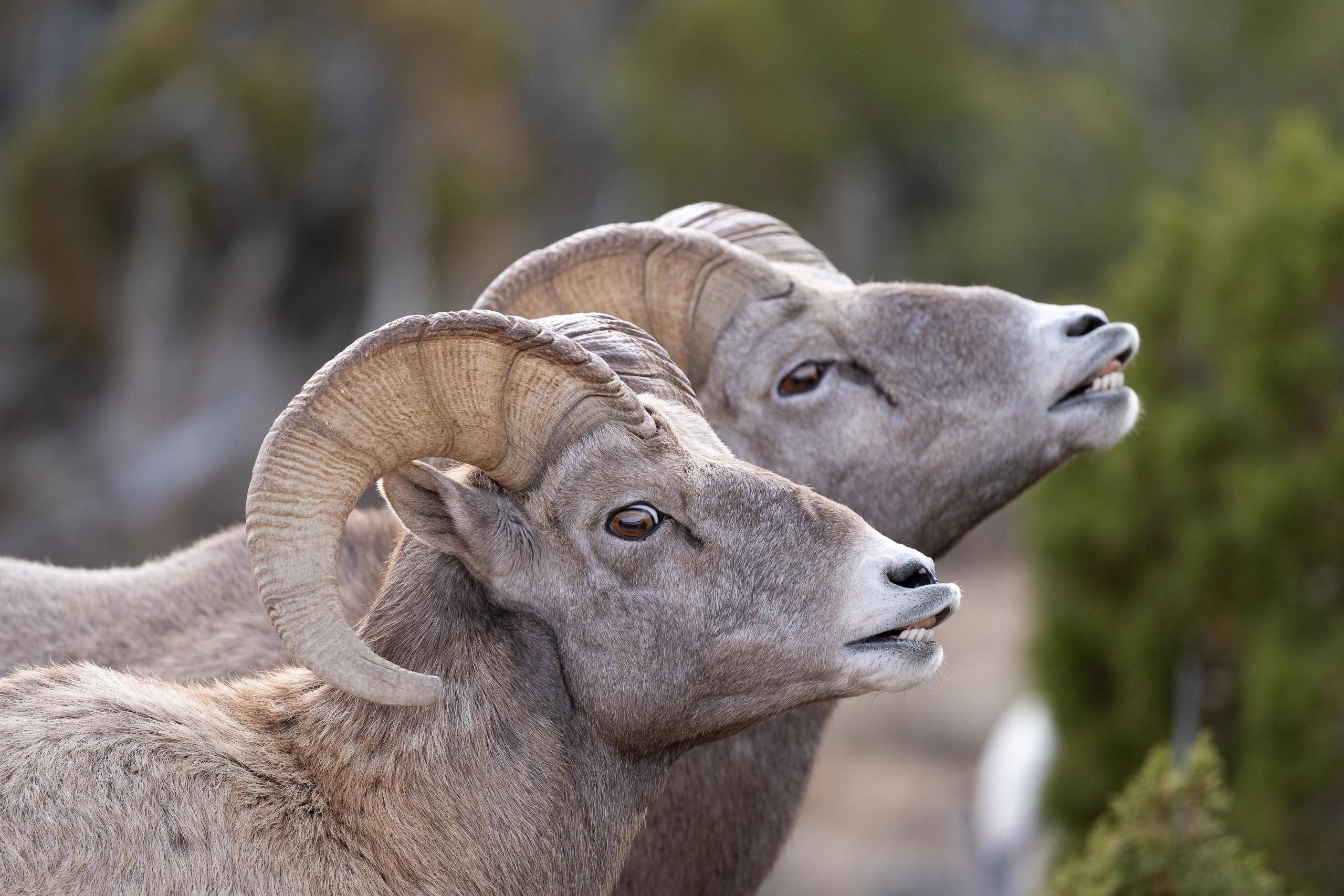 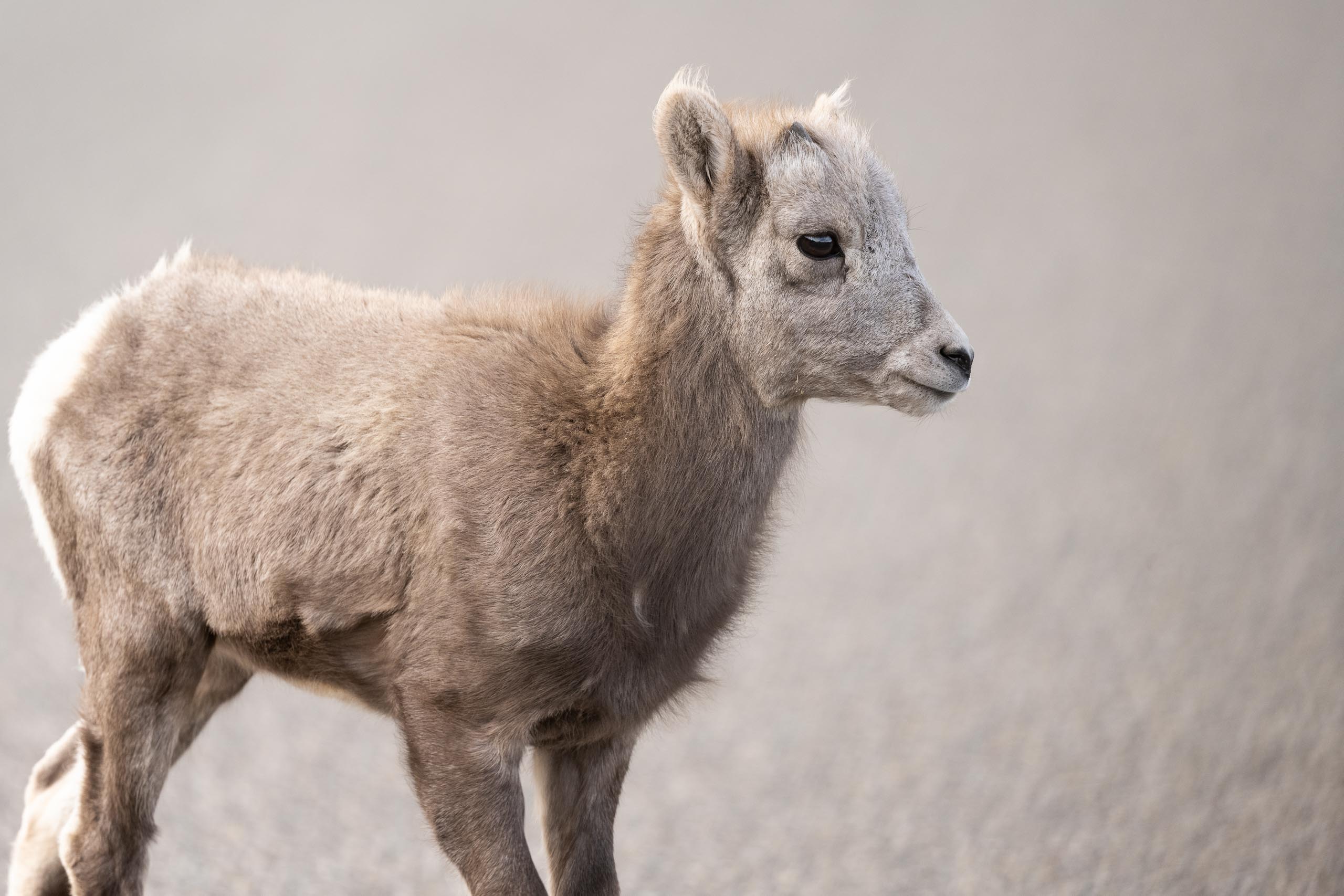 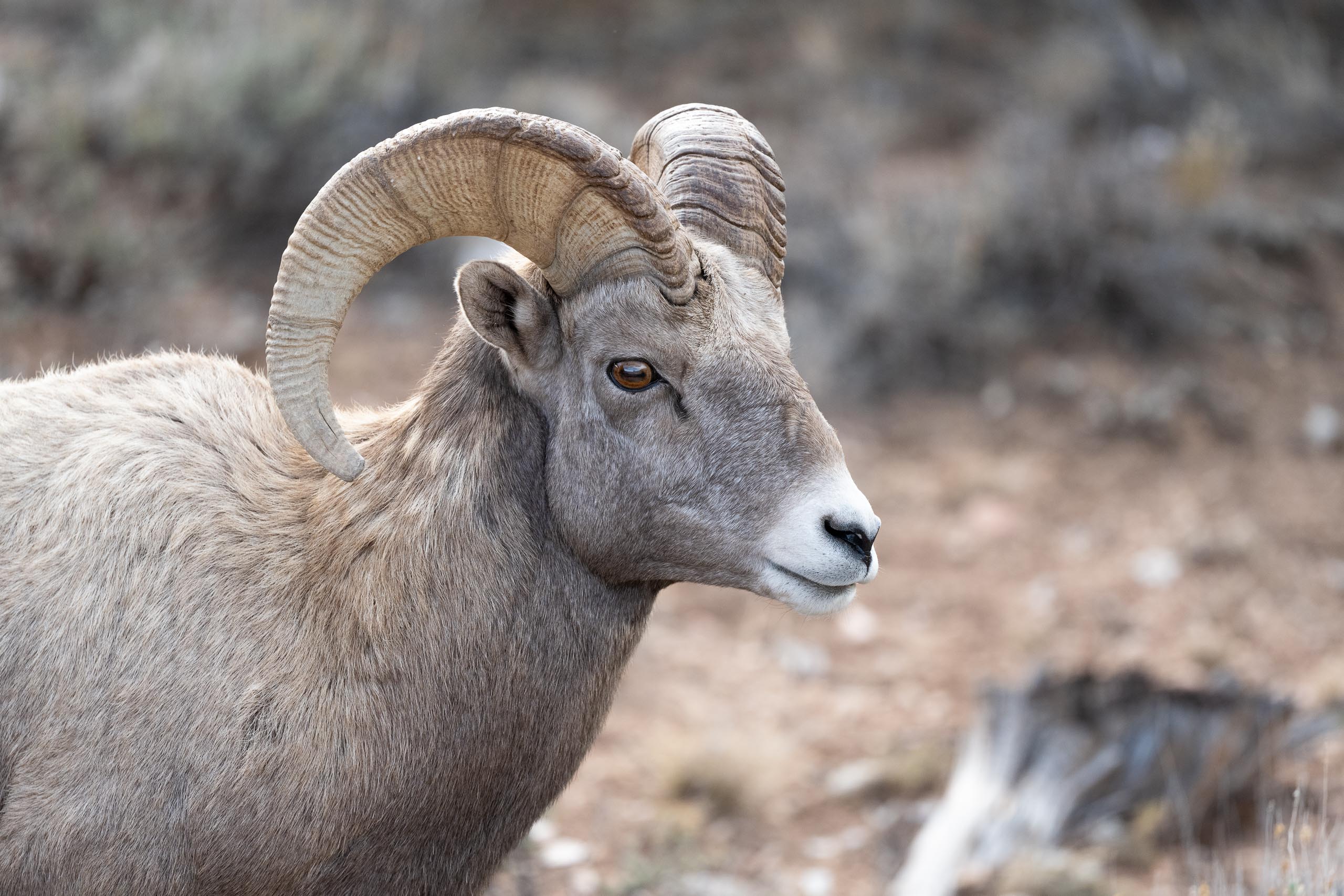 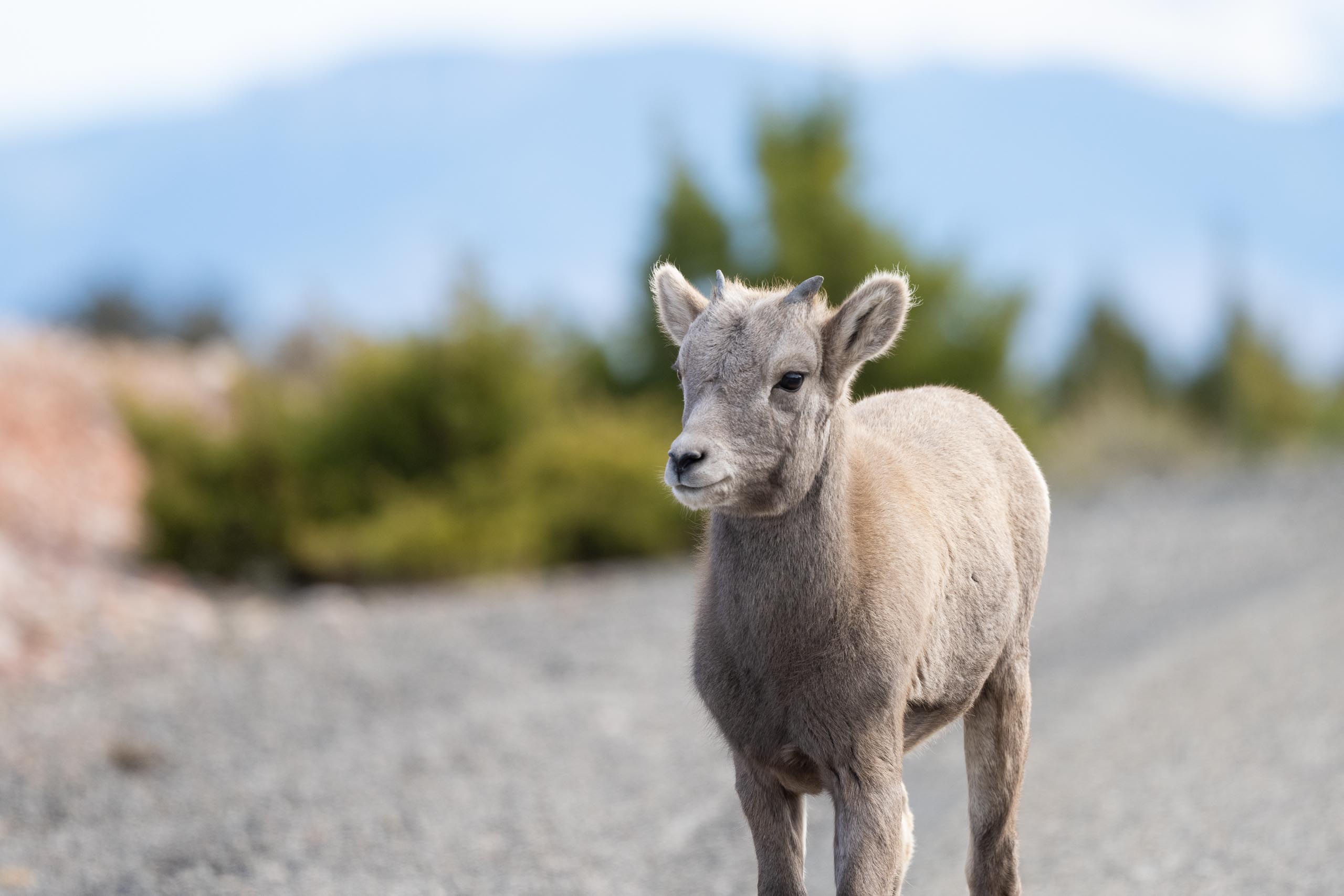 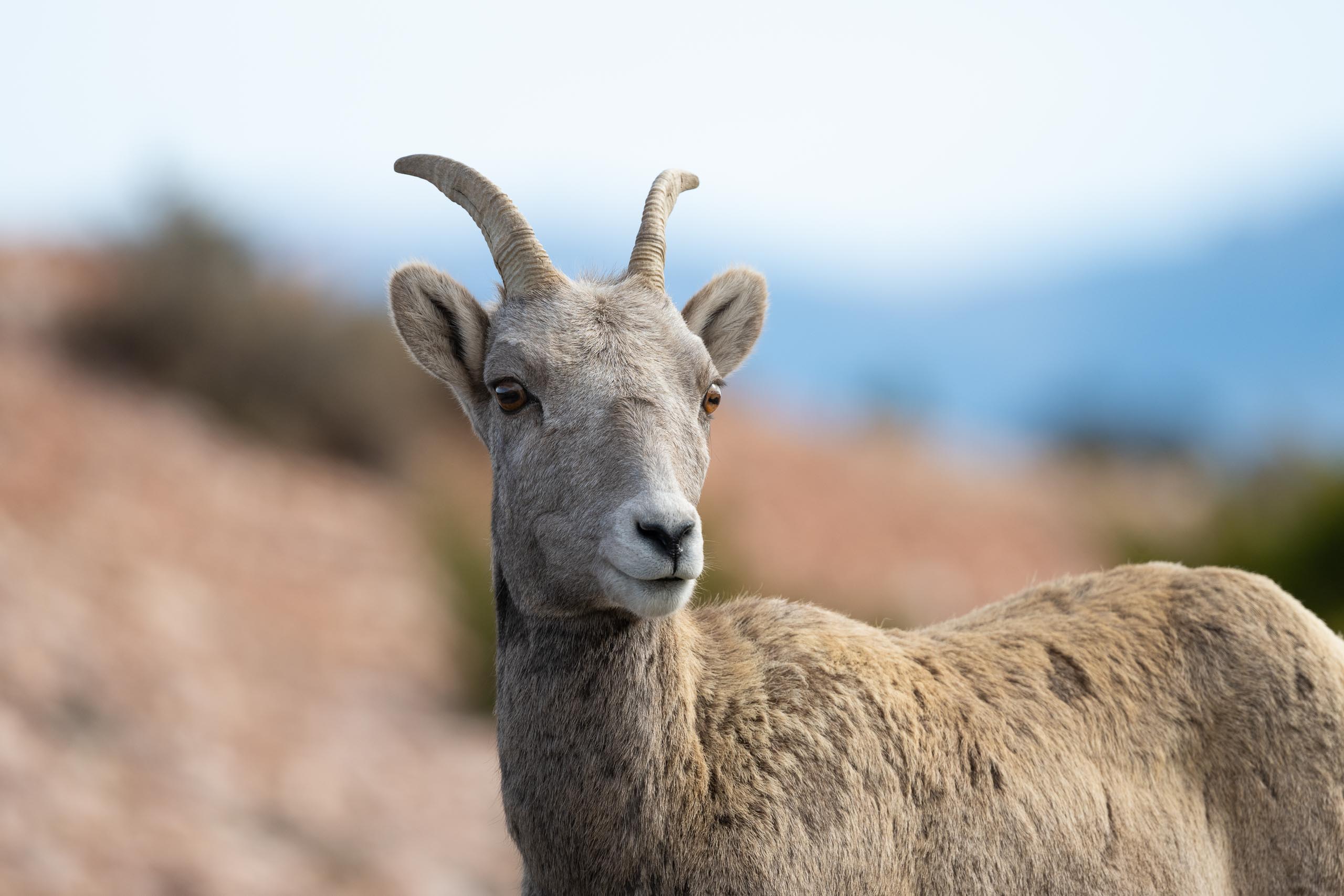 Sullivan’s Knob can be found about a mile north of the Devil Canyon Overlook. Here, a modern trail is intertwined with the faint traces of the ancient Bad Pass Trail. Topping out at only one mile roundtrip, the short path skirts the southern end of a small hill until it dead-ends along the canyon’s rim. From here, you can look south toward Devil Canyon with the reservoir zig-zagging below. 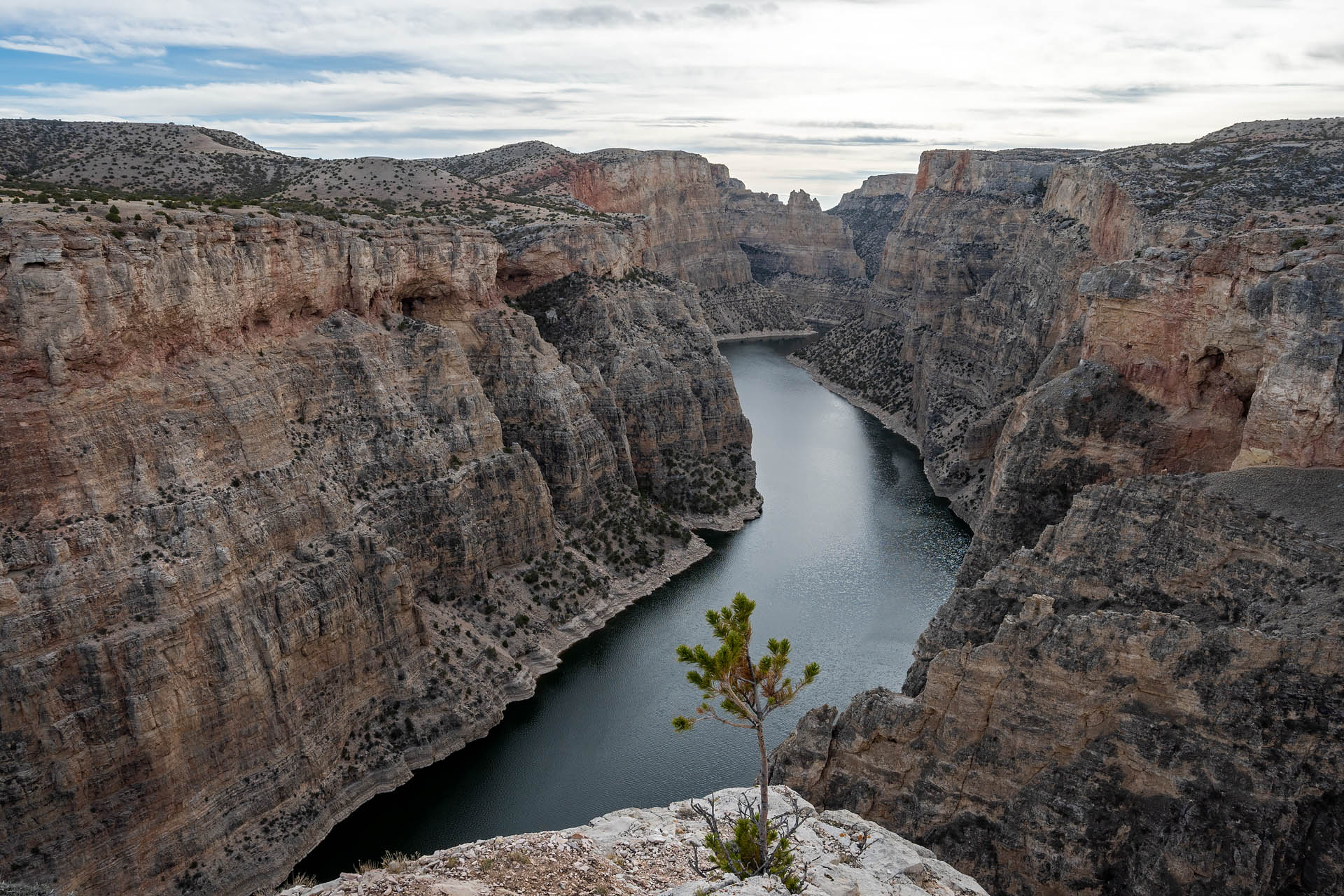 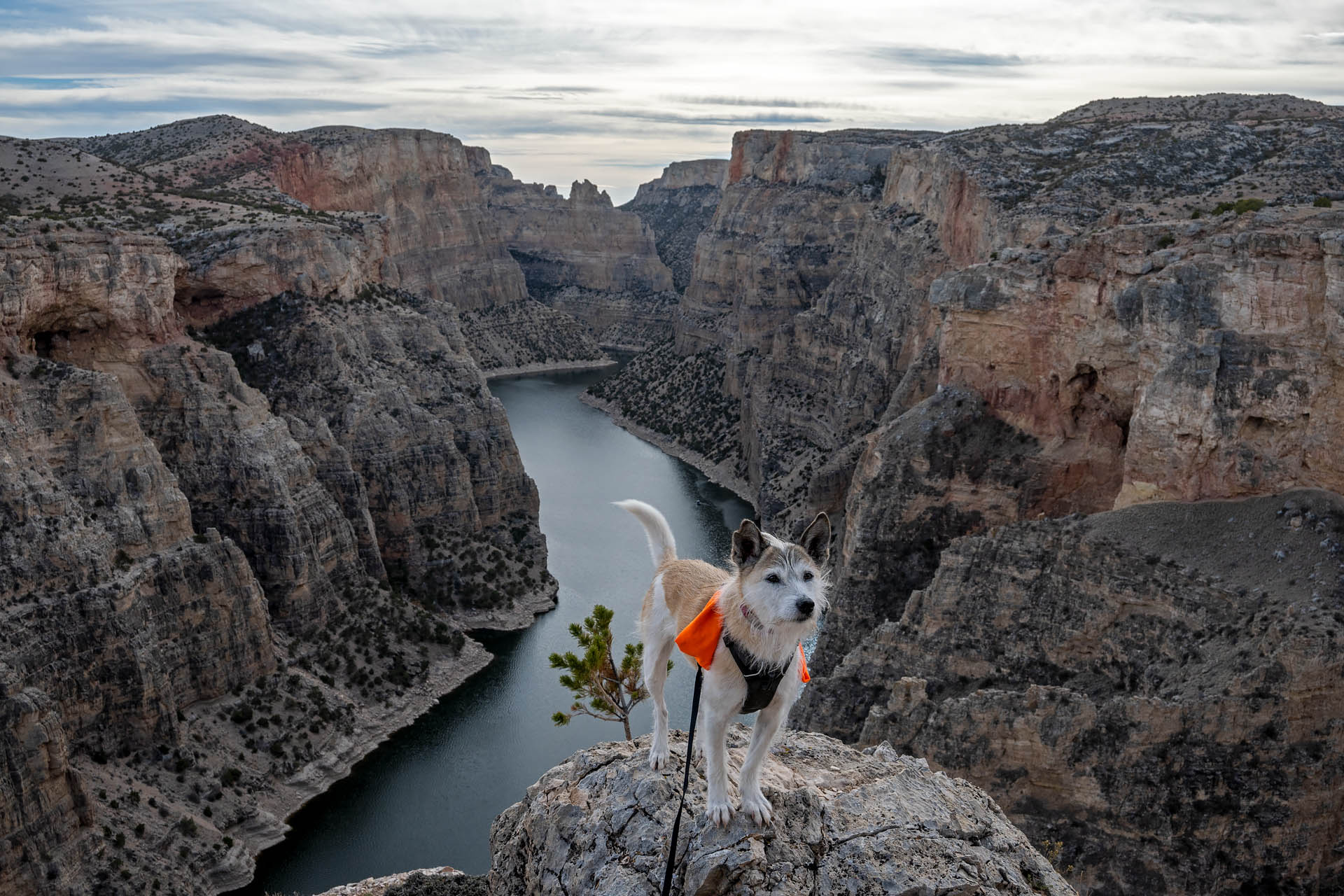 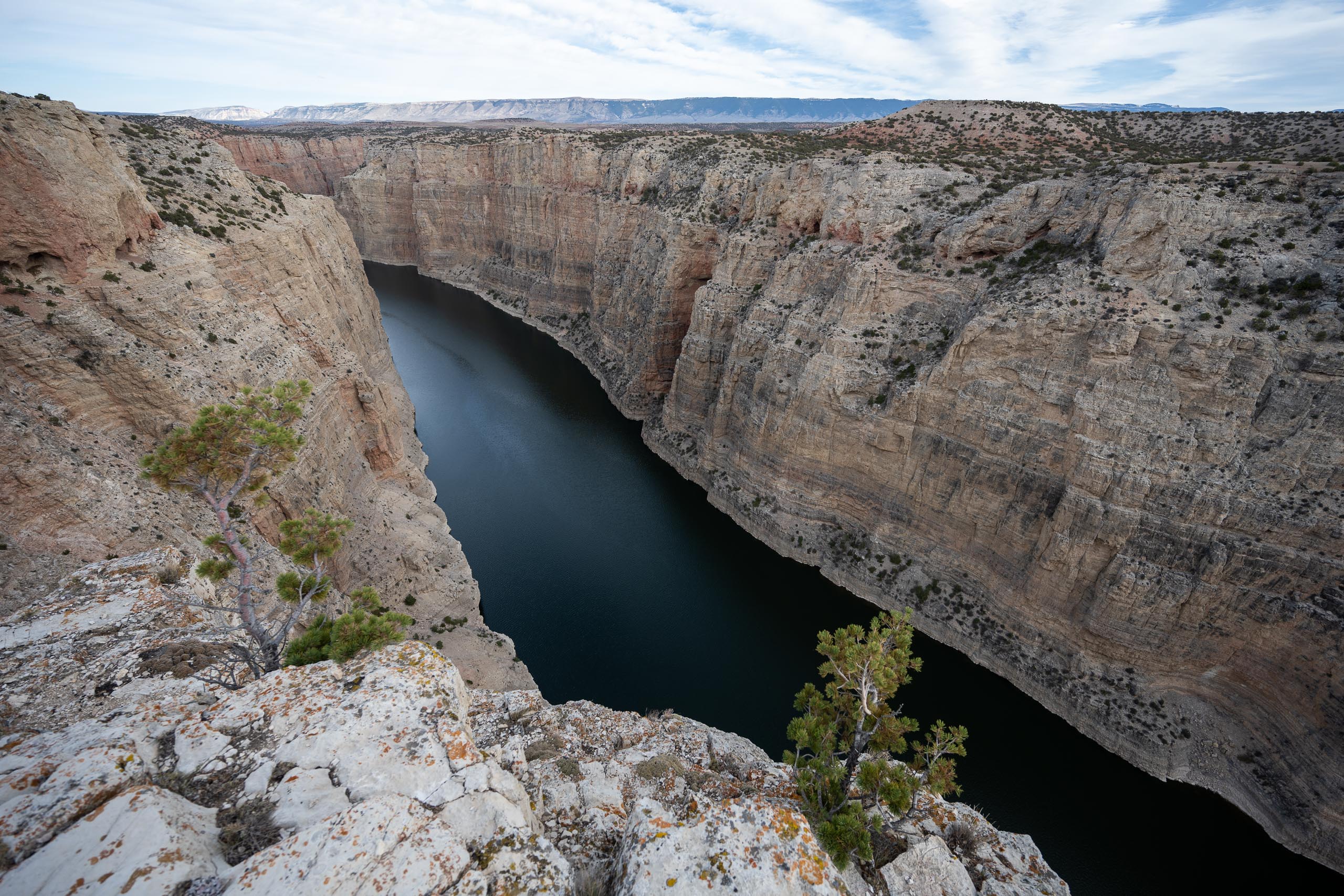 About one and two miles south of Devil Canyon, respectively, the Ranger’s Delight and State Line Trails can be combined to form an out-and-back route of just over two miles. As its name suggests, the State Line Trail skirts the border between Montana and Wyoming. The invisible line runs along the 45th parallel north, the halfway point between the equator and North Pole.

Beginning on the Ranger’s Delight Trail, the path leads to an overlook along the canyon’s rim after just a short half mile. From here, there’s a great view of an s-shaped bend in Bighorn Lake, with the Natural Corrals sitting on the other side of the canyon. Looking east, we could just make out the snow-dusted peaks of the Bighorn Mountains. 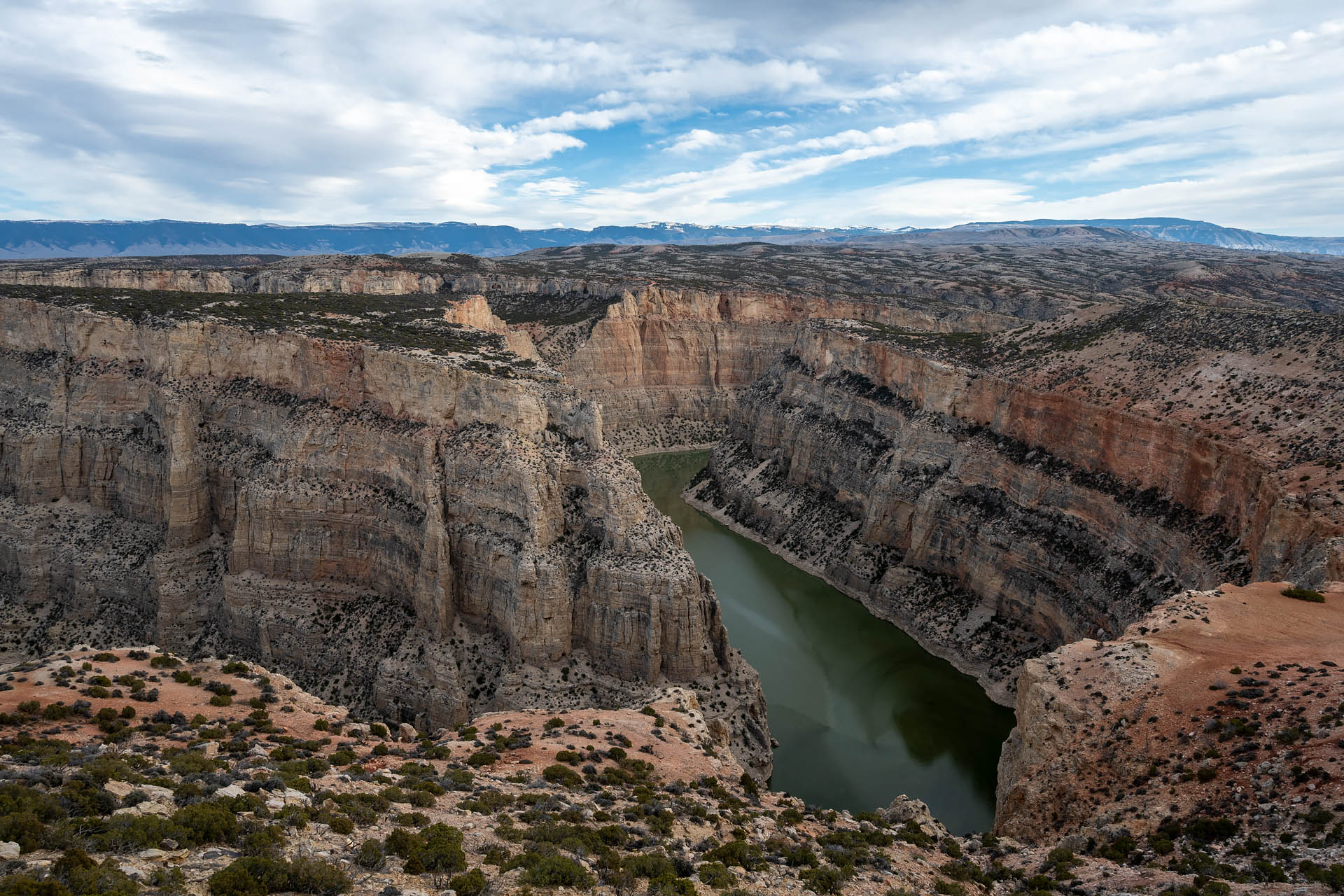 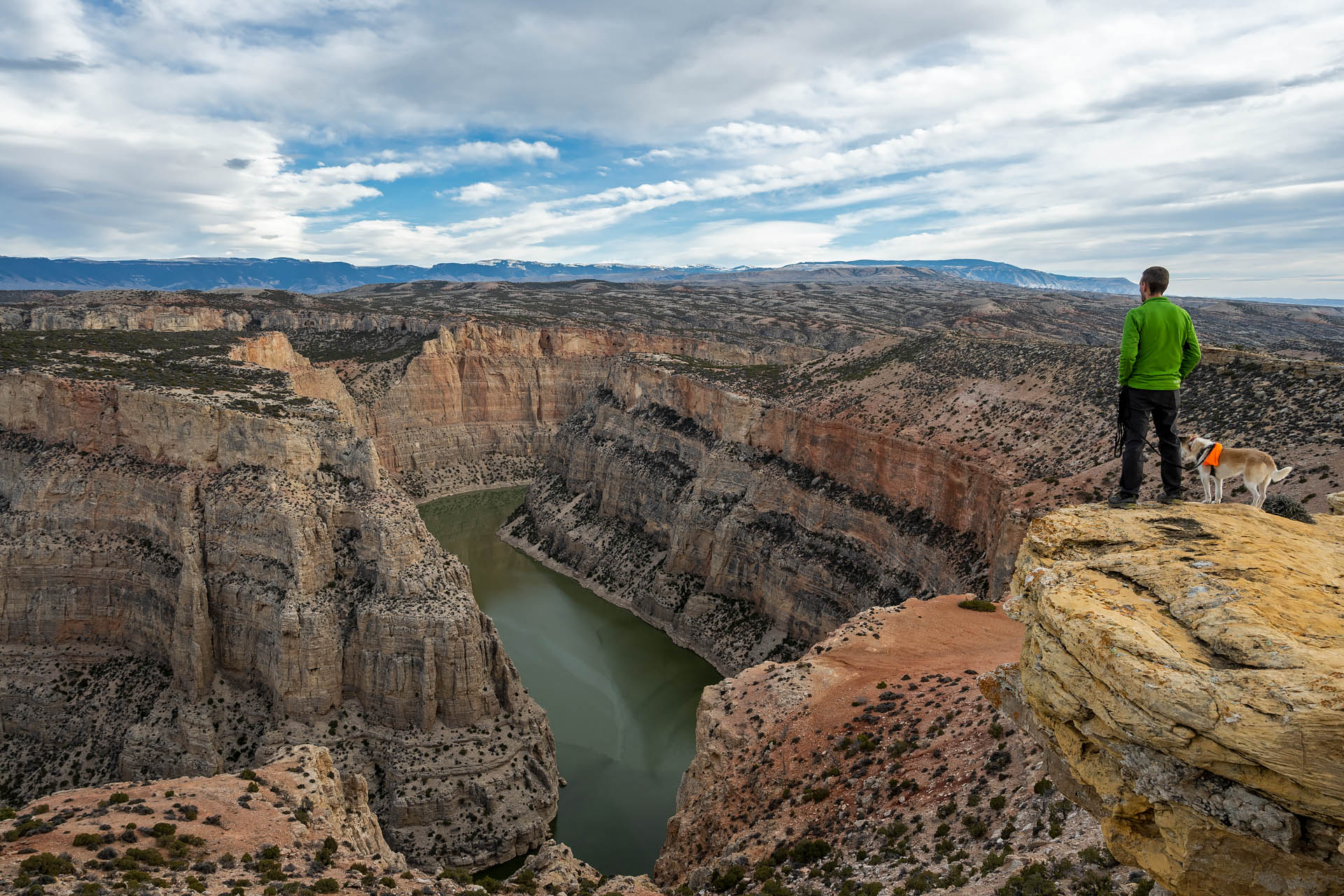 If you’re interested in combining the two trails, a short, 0.3-mile connector links Ranger’s Delight with the State Line Trail to the south. From the connector, the State Line Trail is only another 0.6 miles roundtrip. The trail similarly terminates at the canyon’s edge, this time atop a small peninsula with a slightly different perspective of Bighorn Lake and the Natural Corrals to the north. 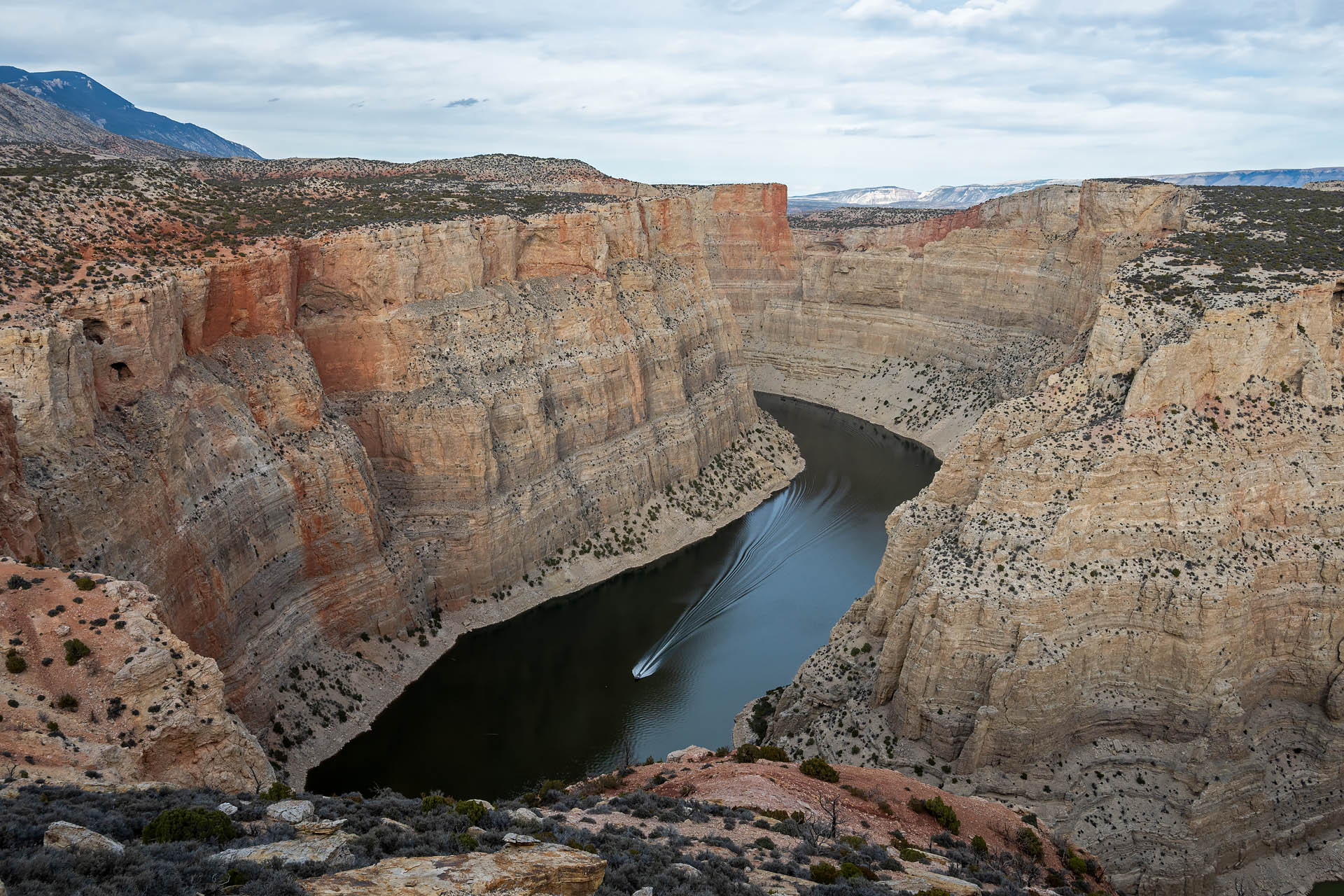 One of the longer routes at Bighorn Canyon is the Sykes Mountain trail. Unlike the previous trails that are all on the Montana side of the park, this one’s actually in WY. Located the southern end of the gorge, this trail is about six miles south of Devil Canyon and four miles south of the MT/WY border.

While there’s still not much elevation gain, this stem-and-loop trail does climb several hundred feet up a rugged desert mountain. The trail begins right along the side of Highway 37, with parking available just across the road at the Crooked Creek Ranger Station. There is an official, signed trail up Sykes Mountain, though it does fade in and out of the landscape somewhat. The trail markers are also a bit hard to spot in places, so you do have to pay attention to stay on course.

Beginning from Big Horn Road, the trail climbs about a mile and a half up the eastern side of the ridge to an overlook at Crooked Creek summit. From here, there are sweeping views of Horseshoe Bend, at the northern tip of Yellowtail Reservoir, with the striking Red Hills sitting just below.

From the Crooked Creek Overlook, the trail loops briefly to the west before regaining the main trail. If you’re interested in extending the hike, another mile or so could be added by crossing the juniper flats to the true summit. Because we were nearly out of daylight and had read that the views didn’t improve significantly across the flats, we ended up turning back at the first overlook.

While this trail is both scenic and lightly-trafficked, it does lack the dramatic canyon views found on the Montana side of the recreation area. Unlike the previous trails, which lead you to the brink of 1,000-foot cliffs along the deep, serpentine canyon, this one neighbors the more level terrain surrounding the Yellowtail Reservoir.