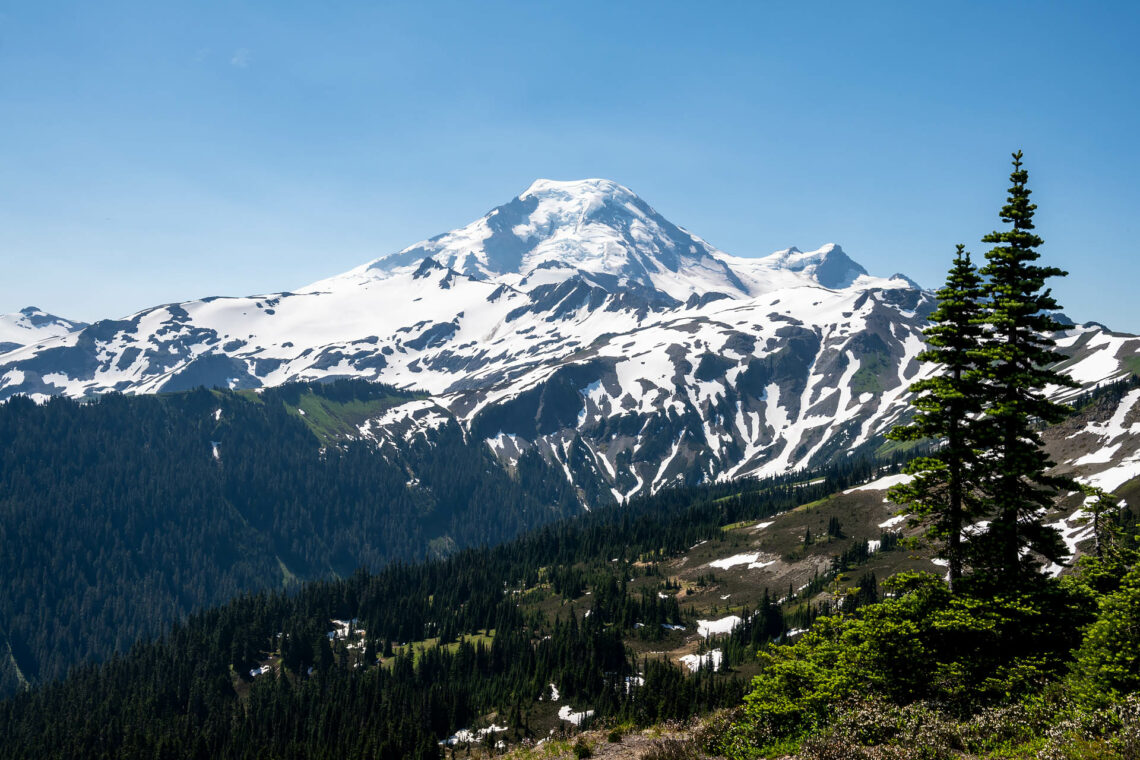 Located just east of the tiny town of Glacier, Skyline Divide is a seriously stunning trail in the heart of Washington’s Mount Baker Wilderness. Abutting North Cascades National Park to the east and the Canadian border to the north, the Mount Baker Wilderness abounds with alpine lakes and high-elevation massifs. Its centerpiece is Mount Baker, a 10,786’ active stratovolcano that is crowned with thirteen named glaciers. Collectively, the glaciers cover about fifteen square miles around the volcano’s summit, making it the second most glaciated peak in the Cascades (second only to Mt. Rainier). In addition to its over-the-top beauty, the region is also known for extreme weather. In fact, the world record for single-season snowfall was recorded at the Mount Baker Ski Area when 1,140 inches (95 feet; 29 meters) fell during the winter of 1998-1999.

Long before European settlers dubbed the peak Mt. Baker in 1792, the mountain was known as (Koma) Kulshan to local tribes, translating in some languages to the ‘Great White Watcher.’ For centuries, Native Americans have passed down varying legends of the origins of Kulshan’s broken, snow-capped summit – a sight that continues to amaze hikers and entice climbers today.

The most difficult part of this ten-mile hike was undoubtedly the drive to the trailhead. Just off the Mt. Baker Highway, the thirteen miles of NF-37 was one of the most rutted-out forest service roads we’ve ever seen. That’s saying something, because we have taken our trusty Subie up some seriously gnarly forest and OHV roads around the western states. The number of gaping potholes when we visited (July 2021) was kind of mind-blowing, and they were completely unavoidable from either side of the road. Google Maps suggested this stretch of forest road would take us about 40 minutes to navigate. It took us just over an hour in our able-bodied Crosstrek.

If you’re looking for a bang-for-your-buck hike, the Skyline Divide Trail (#678) certainly fits the bill. After a two-mile climb through a dense evergreen forest, gaining about 1,500 vertical feet, the trail pops out onto a ridgeline at an elevation of around 6,000 feet. The three-mile-long ridge is an extension of Mt. Baker’s northern flank, and runs north-to-south toward the peak’s glaciated summit. As soon as you break out of the forest, the views are endless. 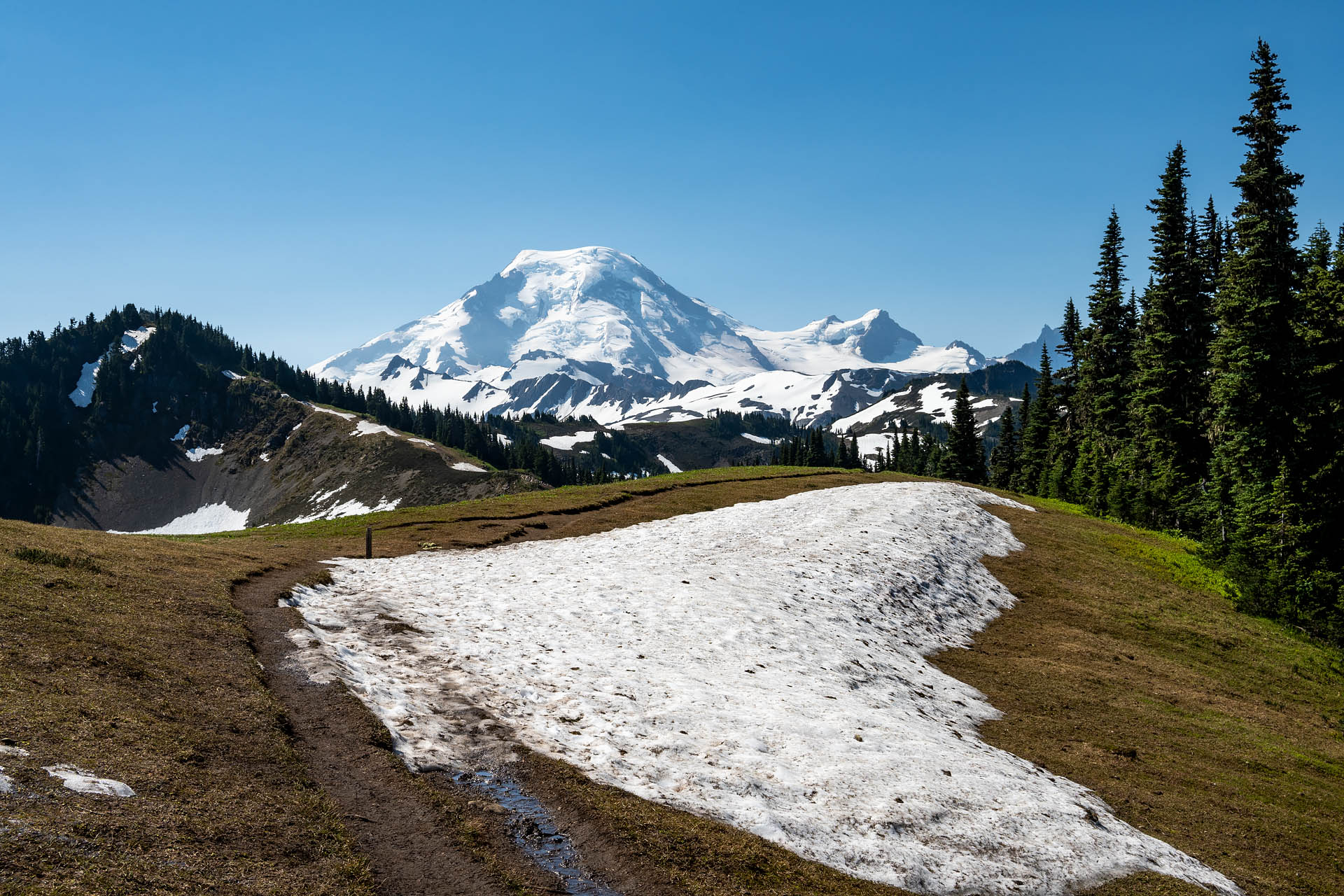 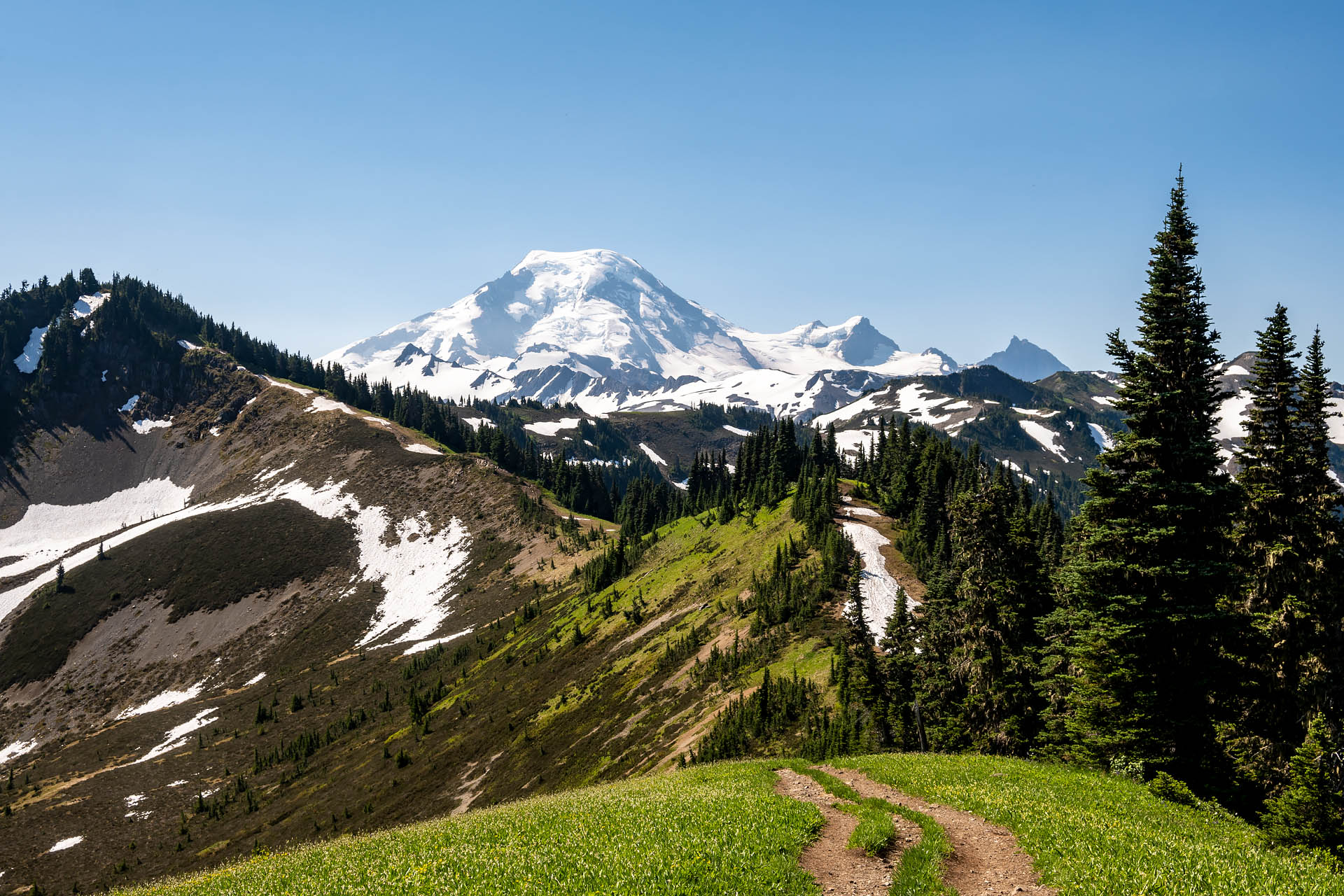 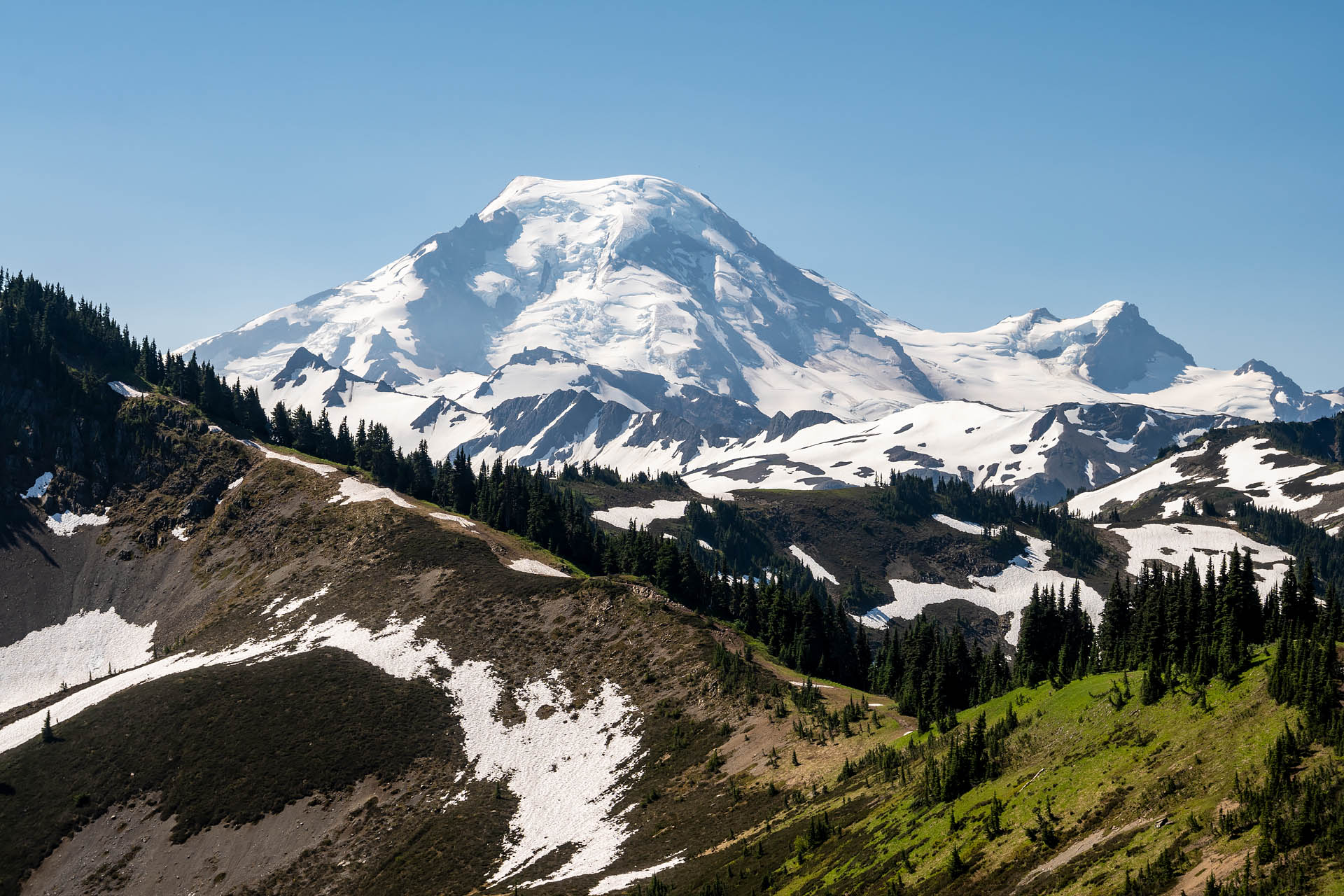 As you traverse the ridgeline, the trail rises and falls along a series of six knolls that eventually intersects with Chowder Ridge, a scrambling route to Hadley Peak. The views looking south to Mt. Baker and east to Mt. Shuksan are completely unobstructed, and were some of the most imposing we saw during our three months hiking around Washington’s Cascades. 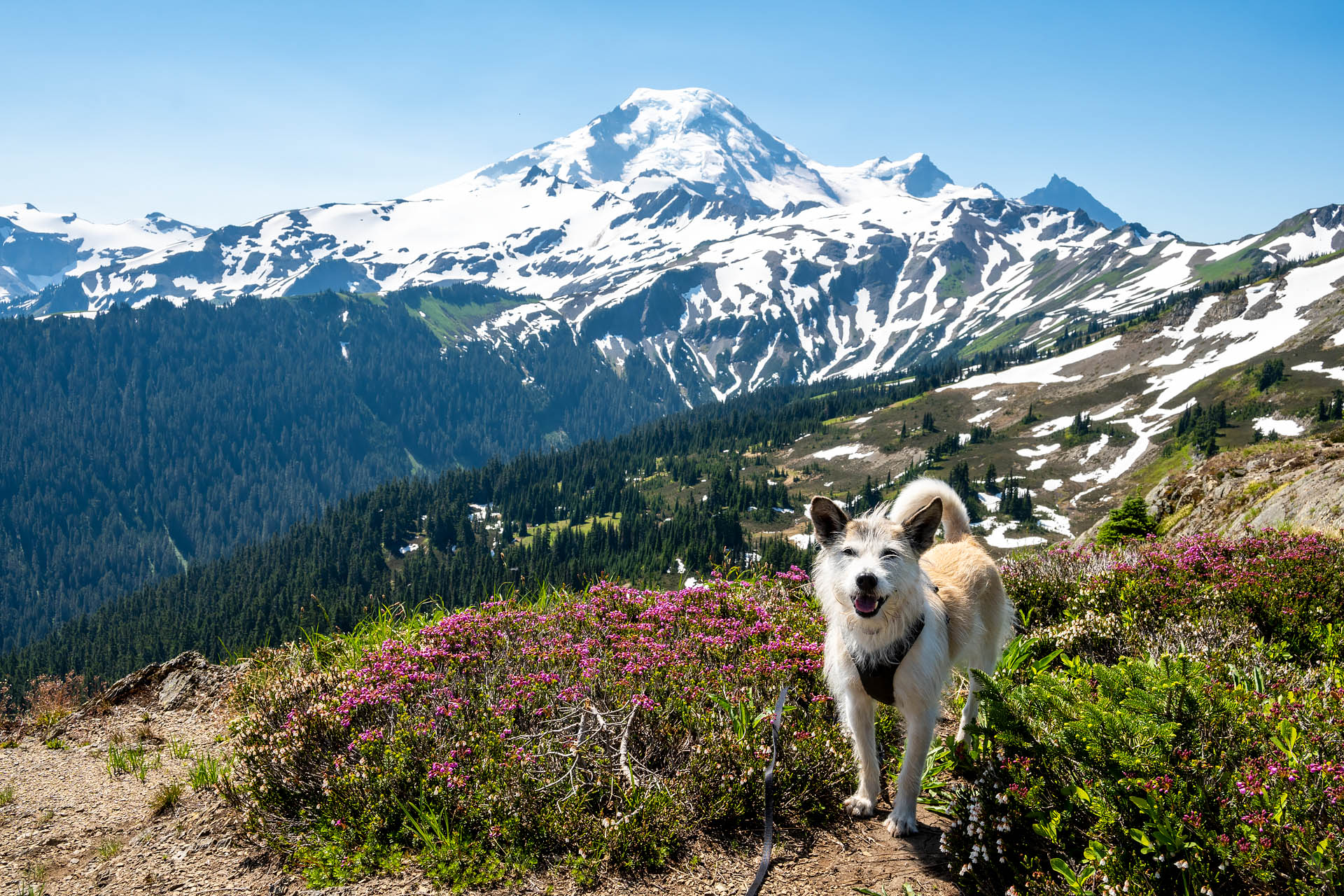 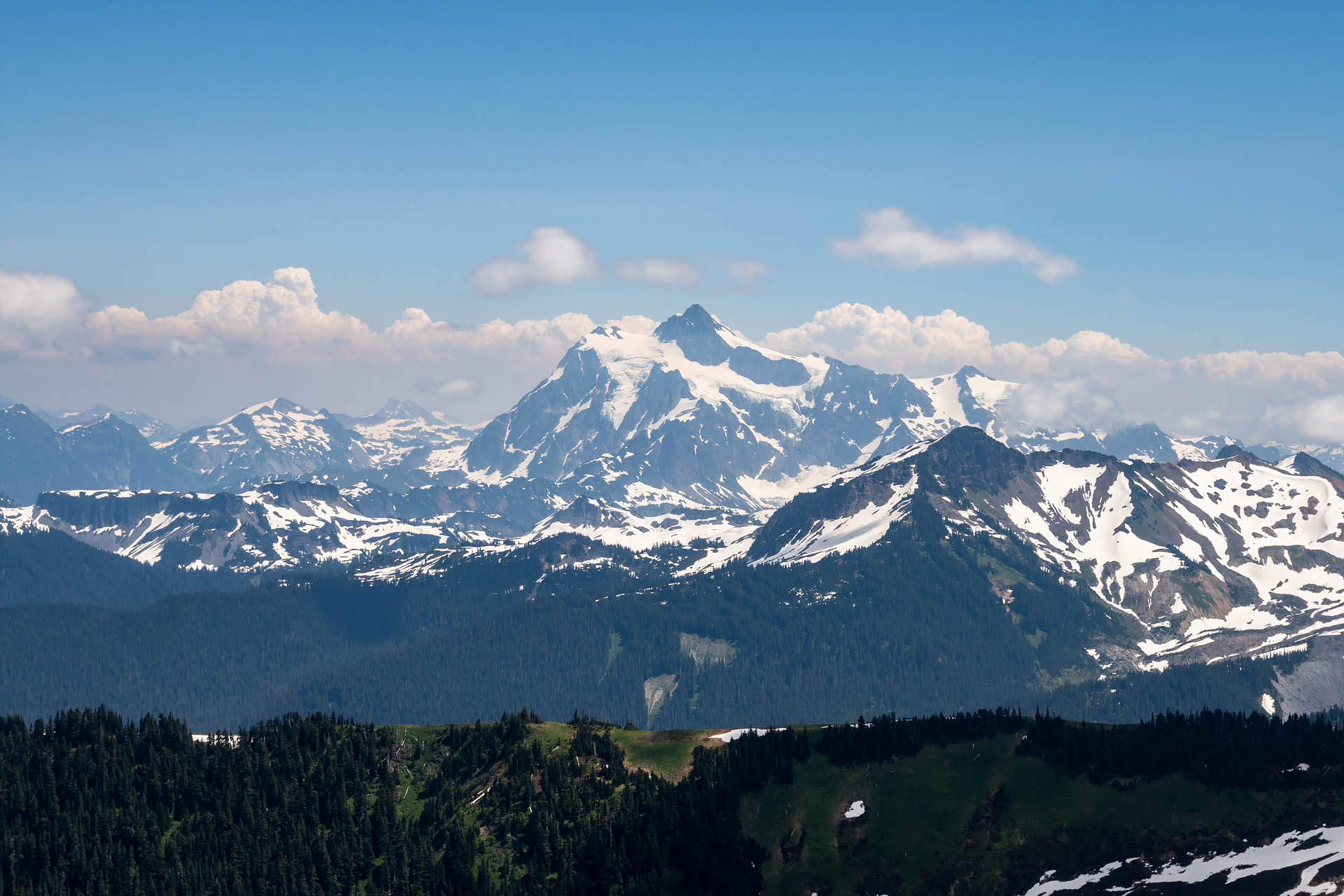 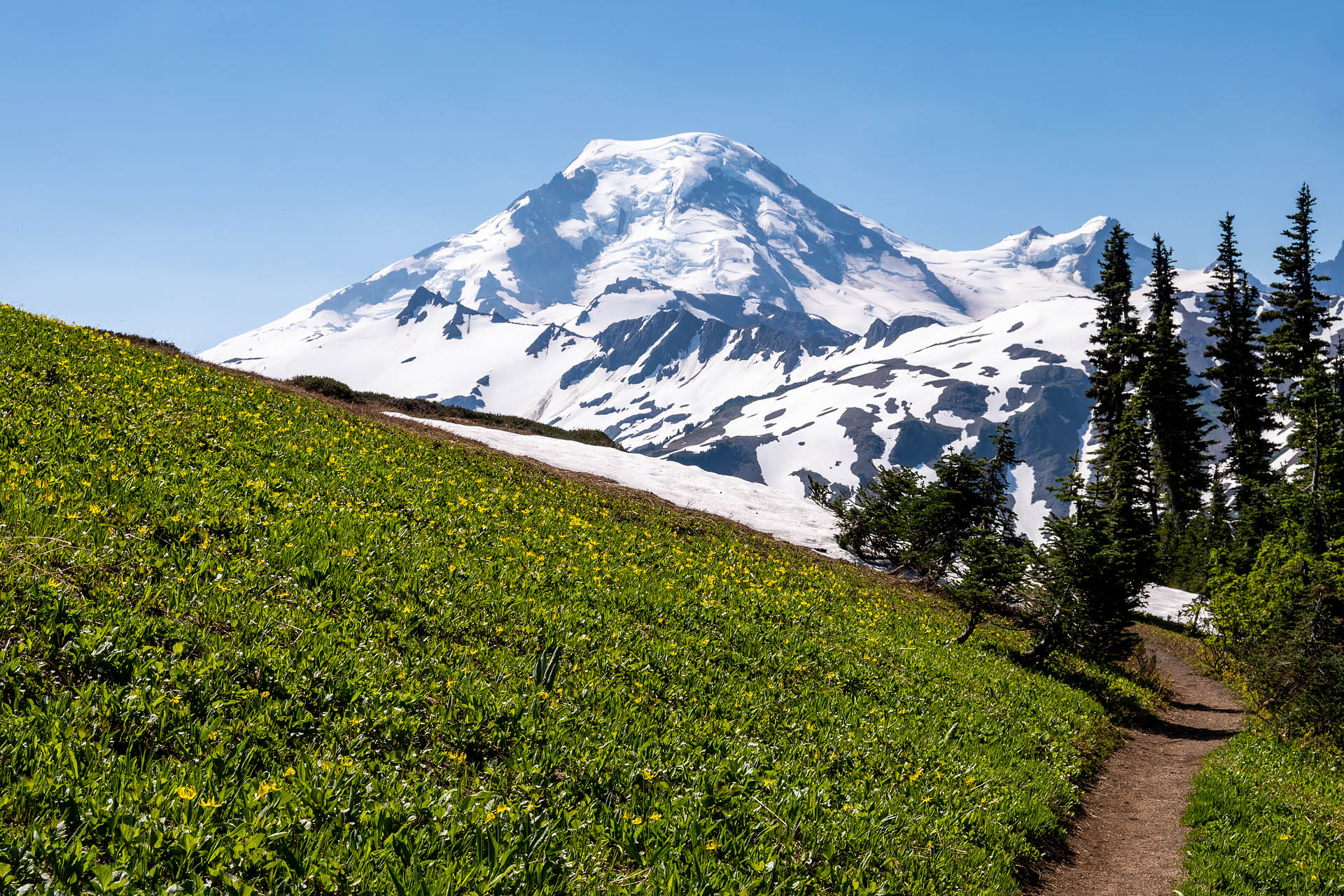 After a year of record-breaking snowpack, the trail had only recently melted out when we visited in early July. That said, the alpine meadows were already teeming with colorful wildflowers. Glacier lilies, red heather, paintbrush, penstemon, and moss campion blanketed the green hillsides. 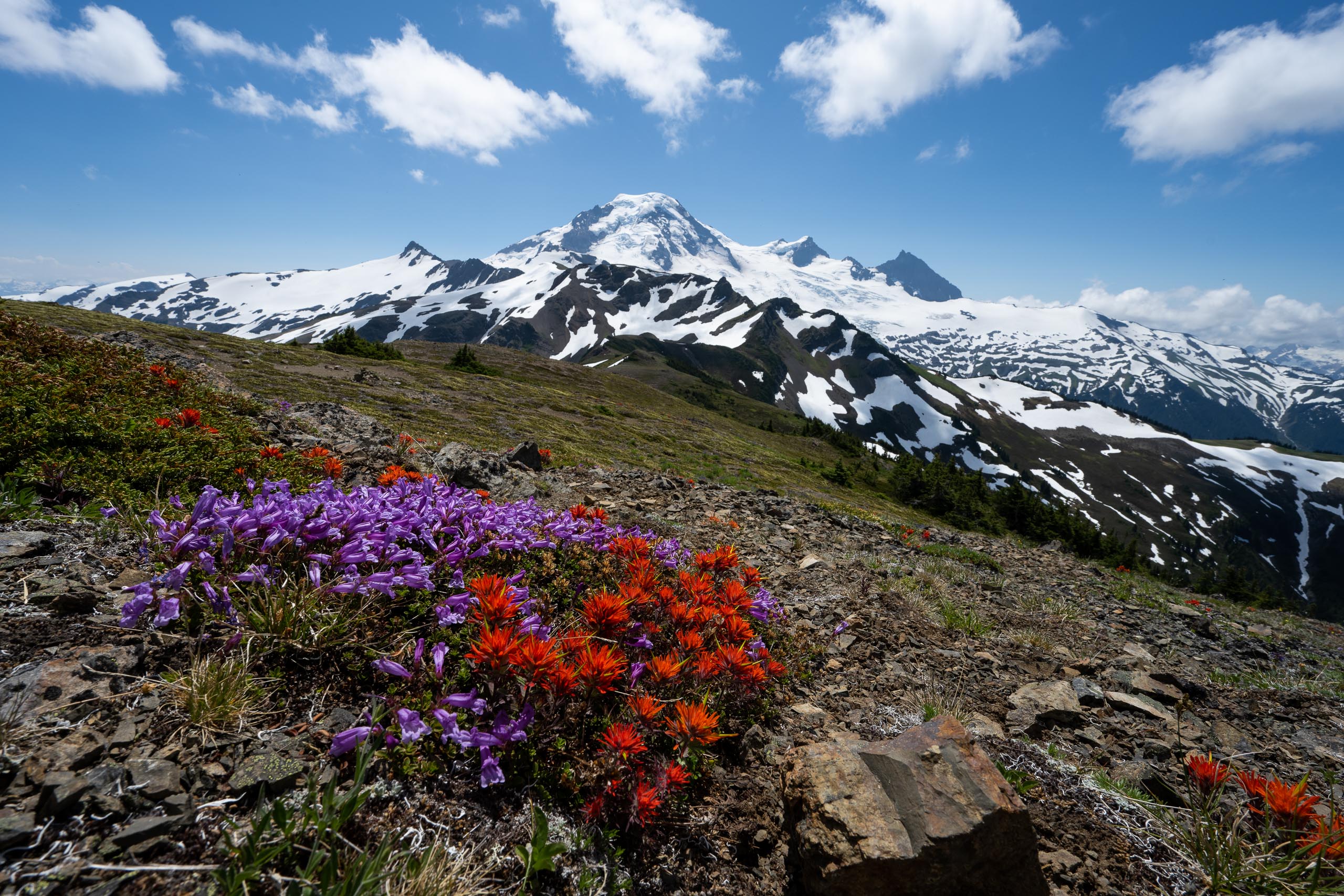 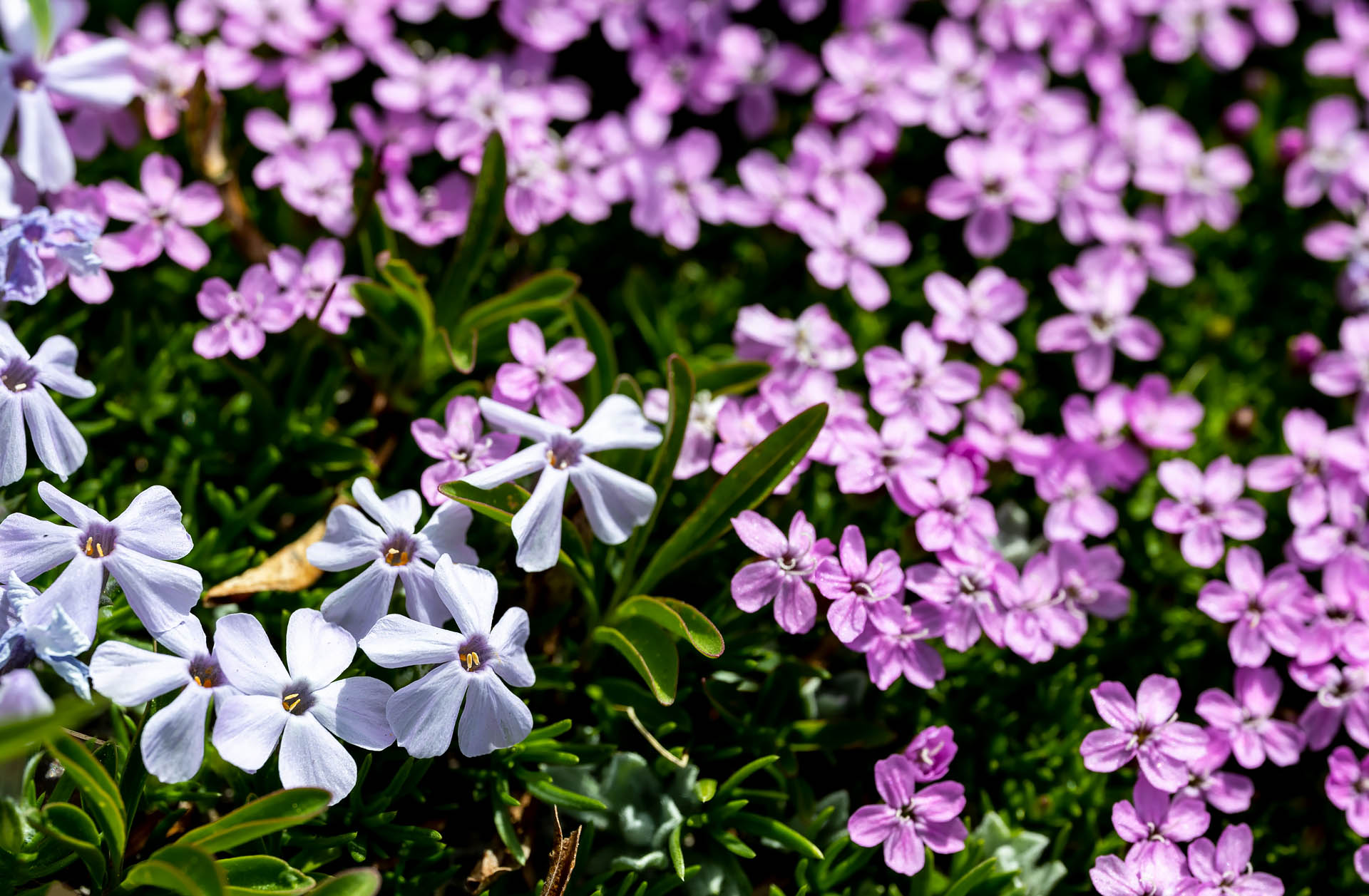 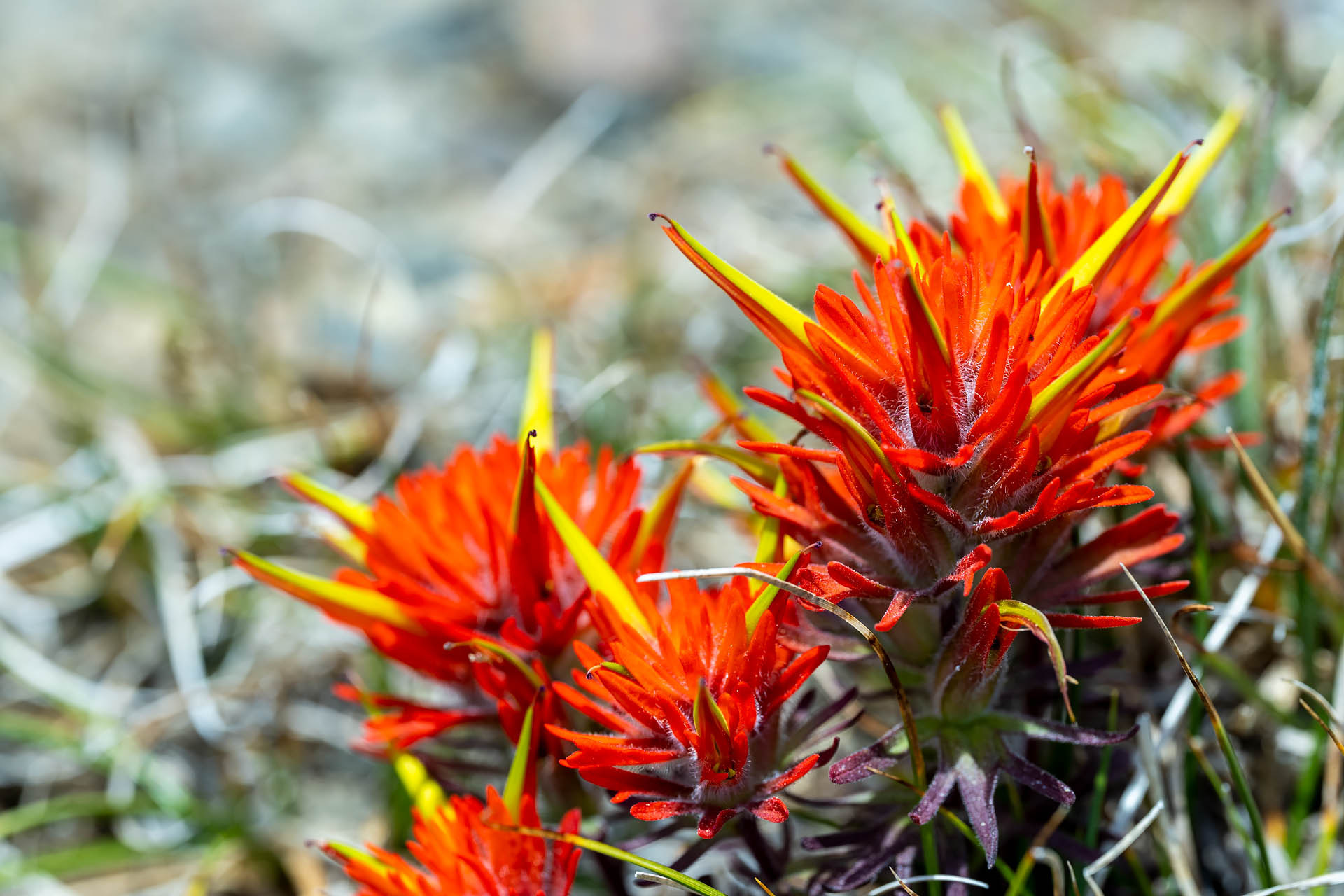 While we were in complete awe of the scenery as soon as we popped out atop the first knoll, the views only improved as we made our way south to the sixth knoll. Topping out at an elevation of around 6,500 feet, we stopped at the last hill for lunch. Mt. Baker’s massive glaciers now lie directly before us. In the distance behind the vast Roosevelt Glacier, we could make out the silhouettes of the Black Buttes (Lincoln and Colfax Peaks), the remnants of ancient volcanoes that preceded Mt. Baker. Looking back at our track along the ridge, we could make out the distant summits of Tomyhoi and American Border Peaks as well as Mt. Larrabee. 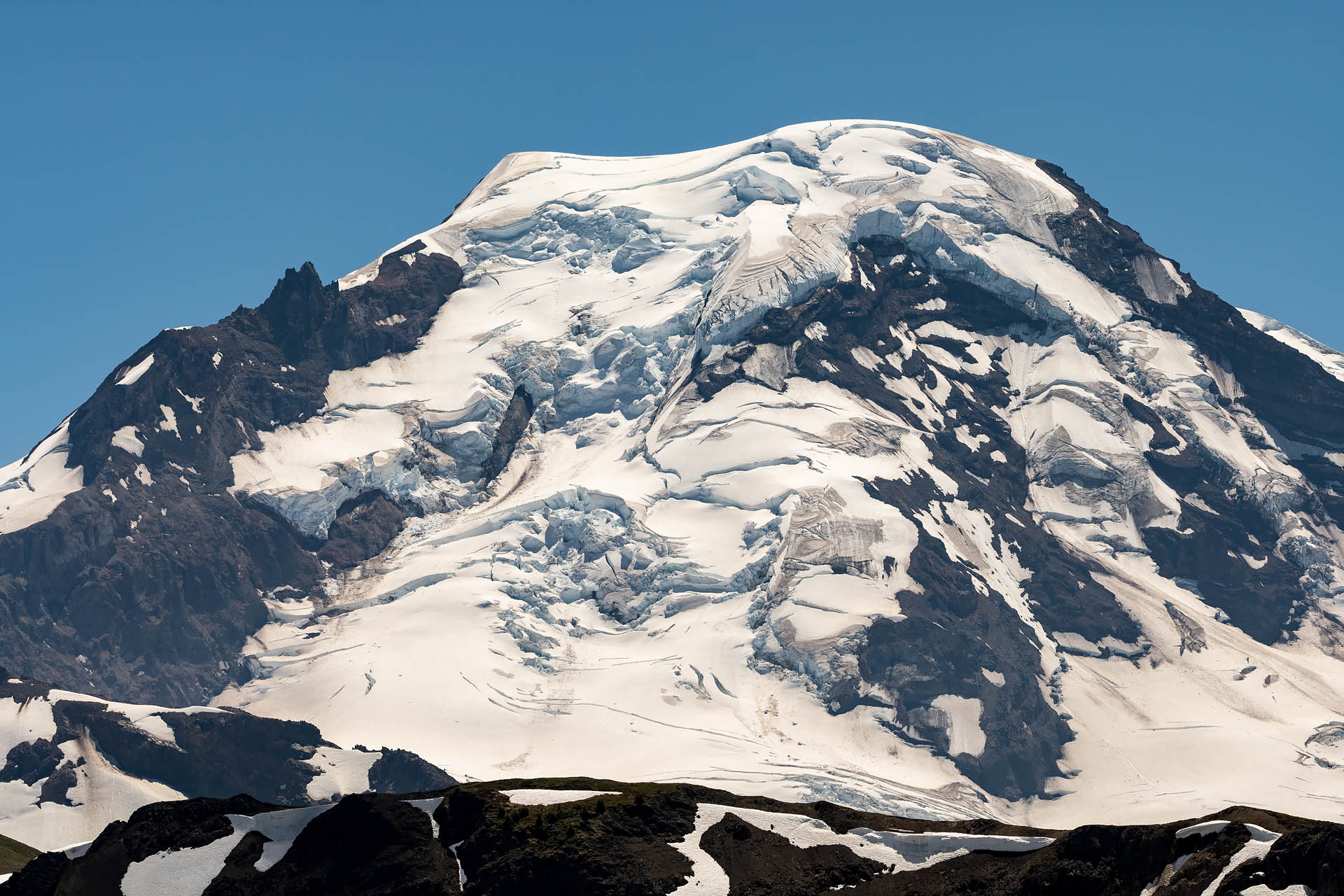 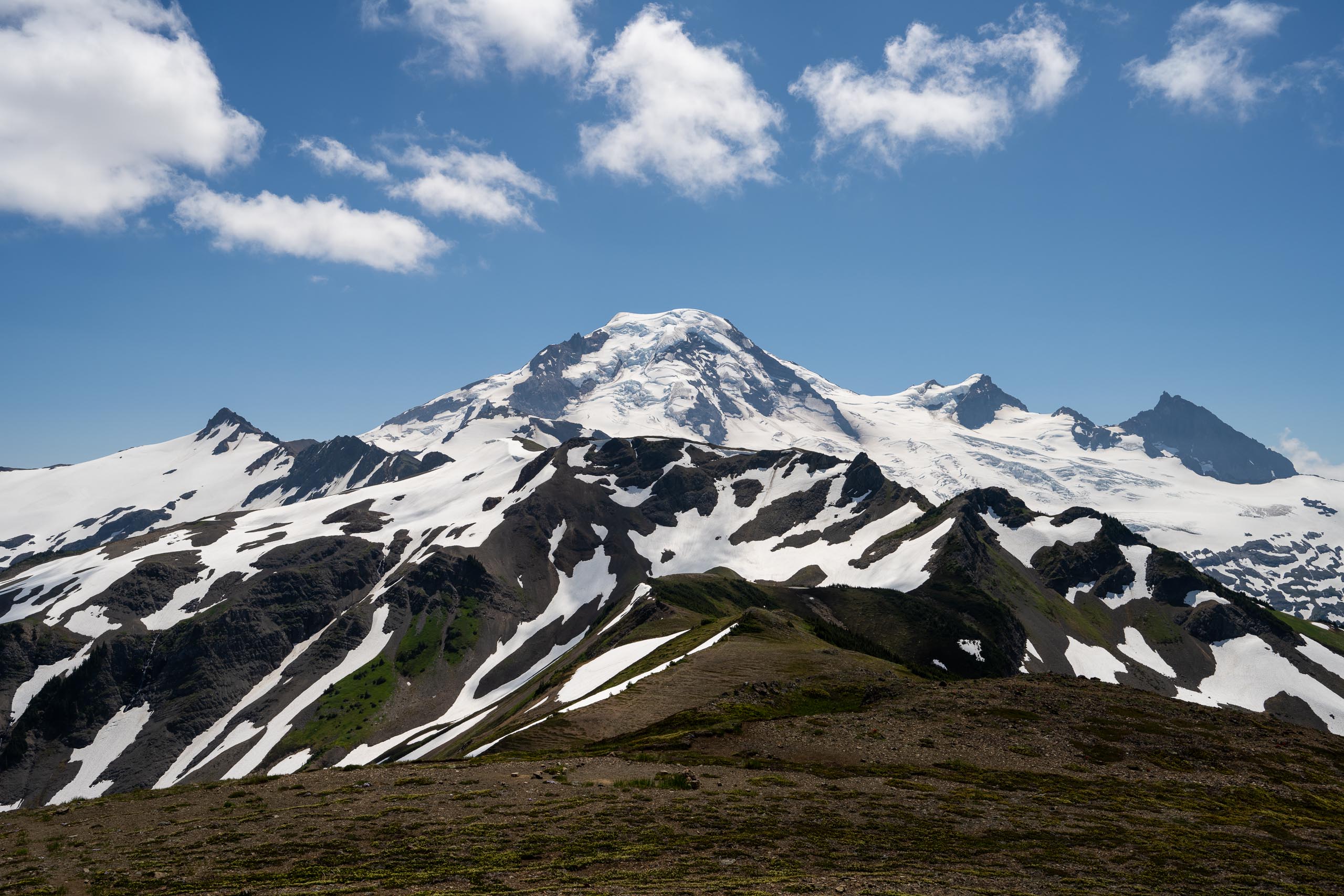 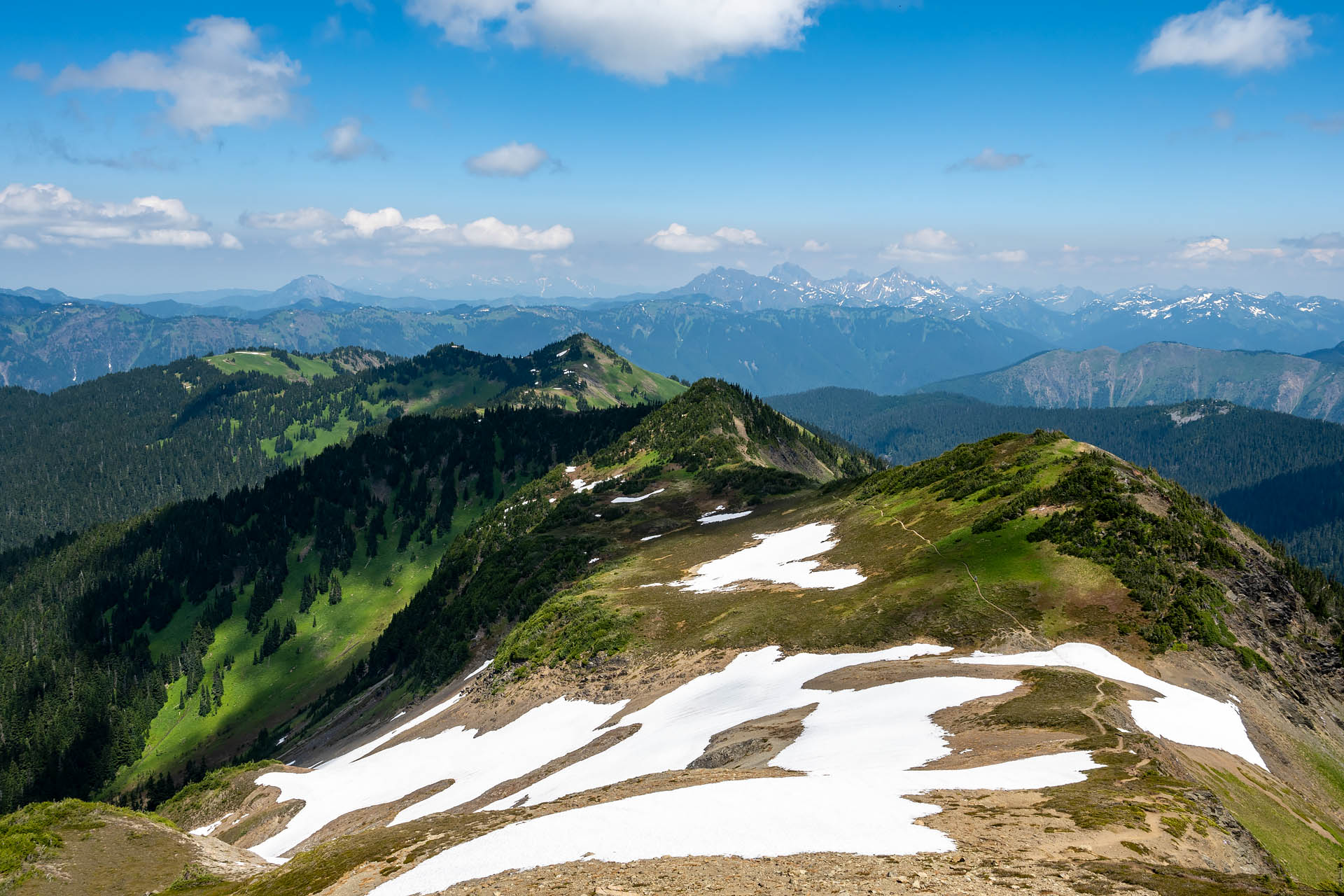 Although Skyline Divide is one of the more popular trails in the Mt. Baker Wilderness, we saw only a handful of other hikers the entire day – an unexpected and much appreciated surprise. Between the panoramic views, prolific wildflowers, perfect weather and peaceful solitude, it was hard to eventually tear ourselves away from it all.

In sum, this trail was fantastic. Aside from the shit drive up and down Forest Service Road 37, everything about this hike was flawless. The unending views reminded us of our hike along the Bald Hills in Jasper National Park, where we were surrounded by stunning scenery for nearly every step of the hike. 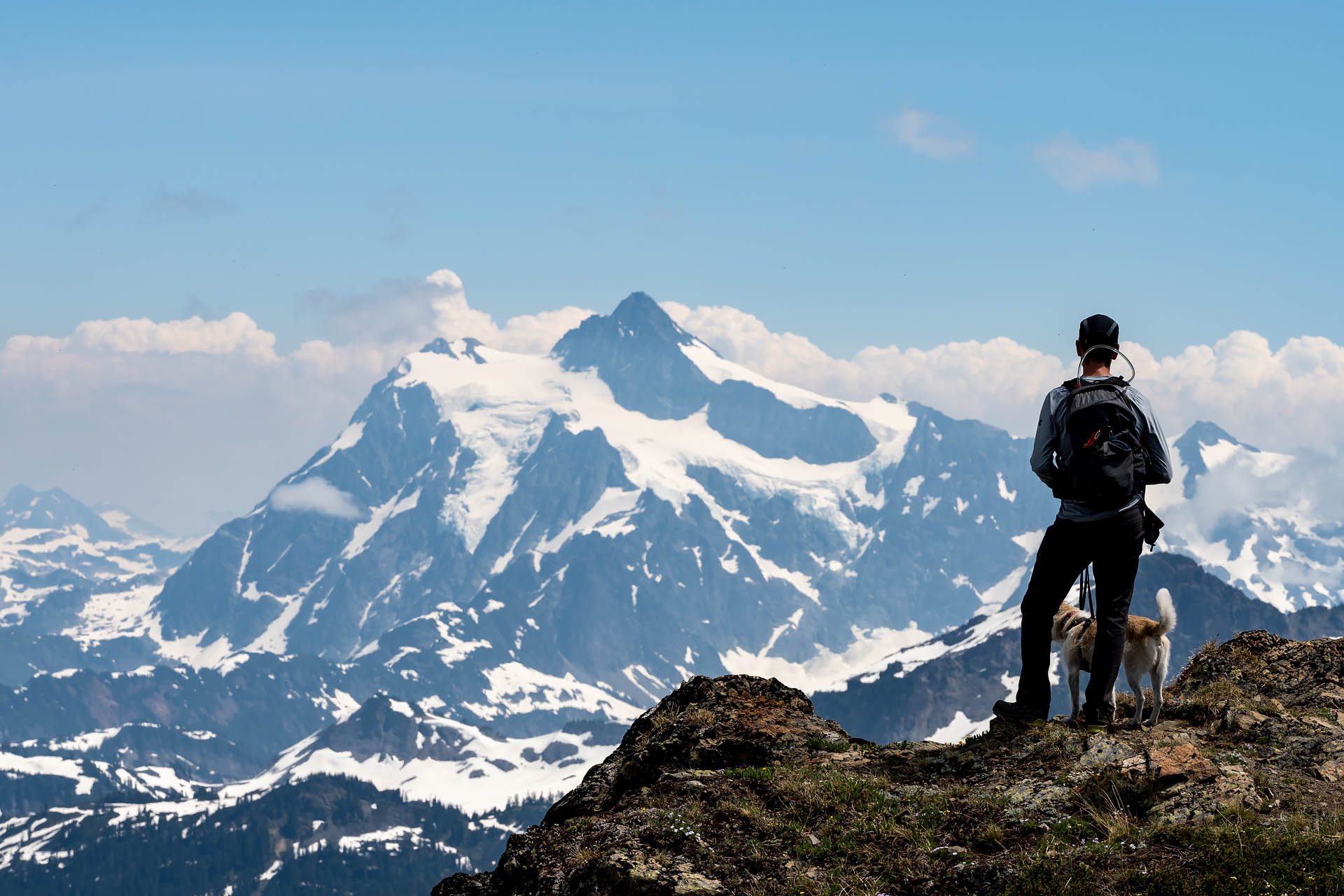 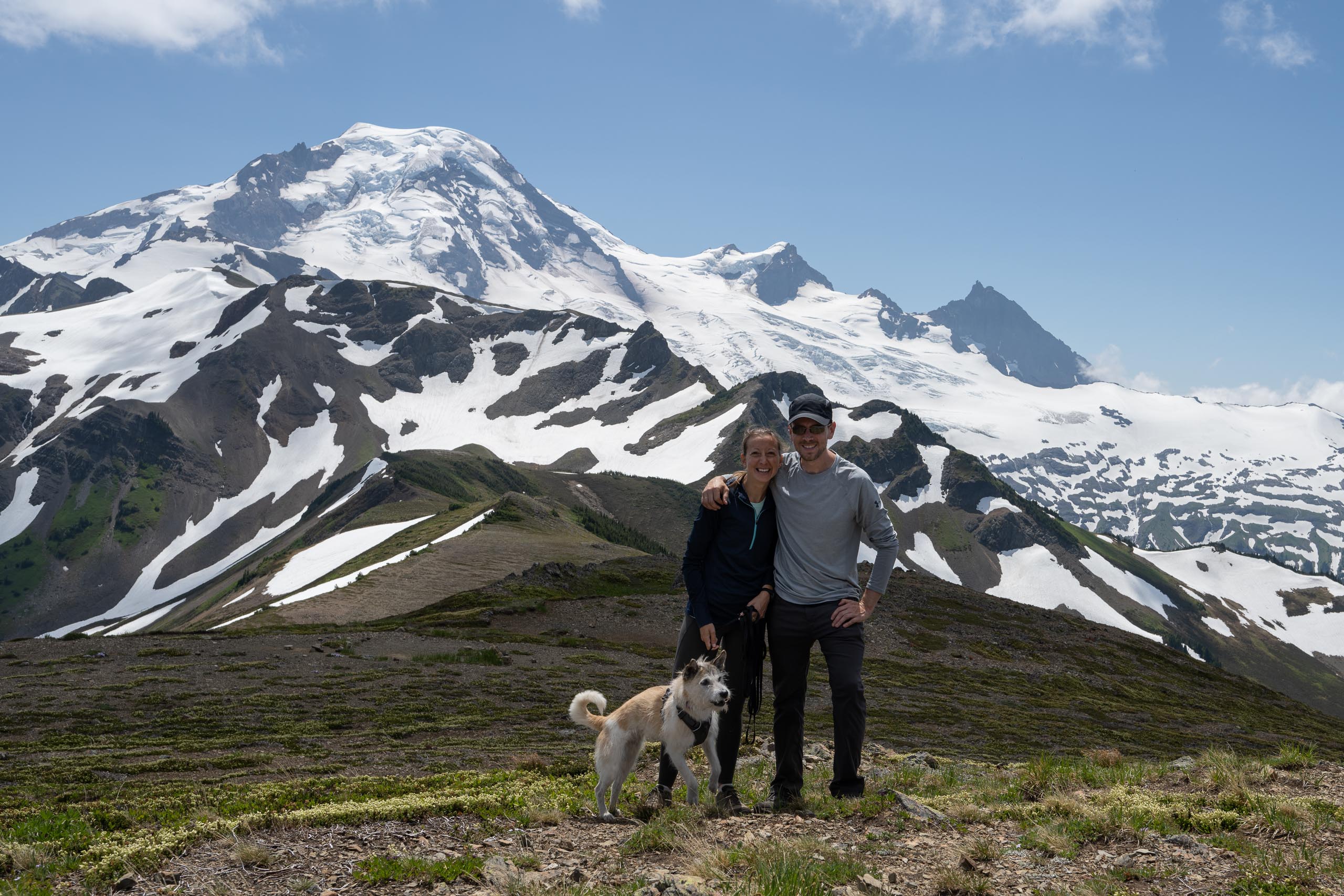 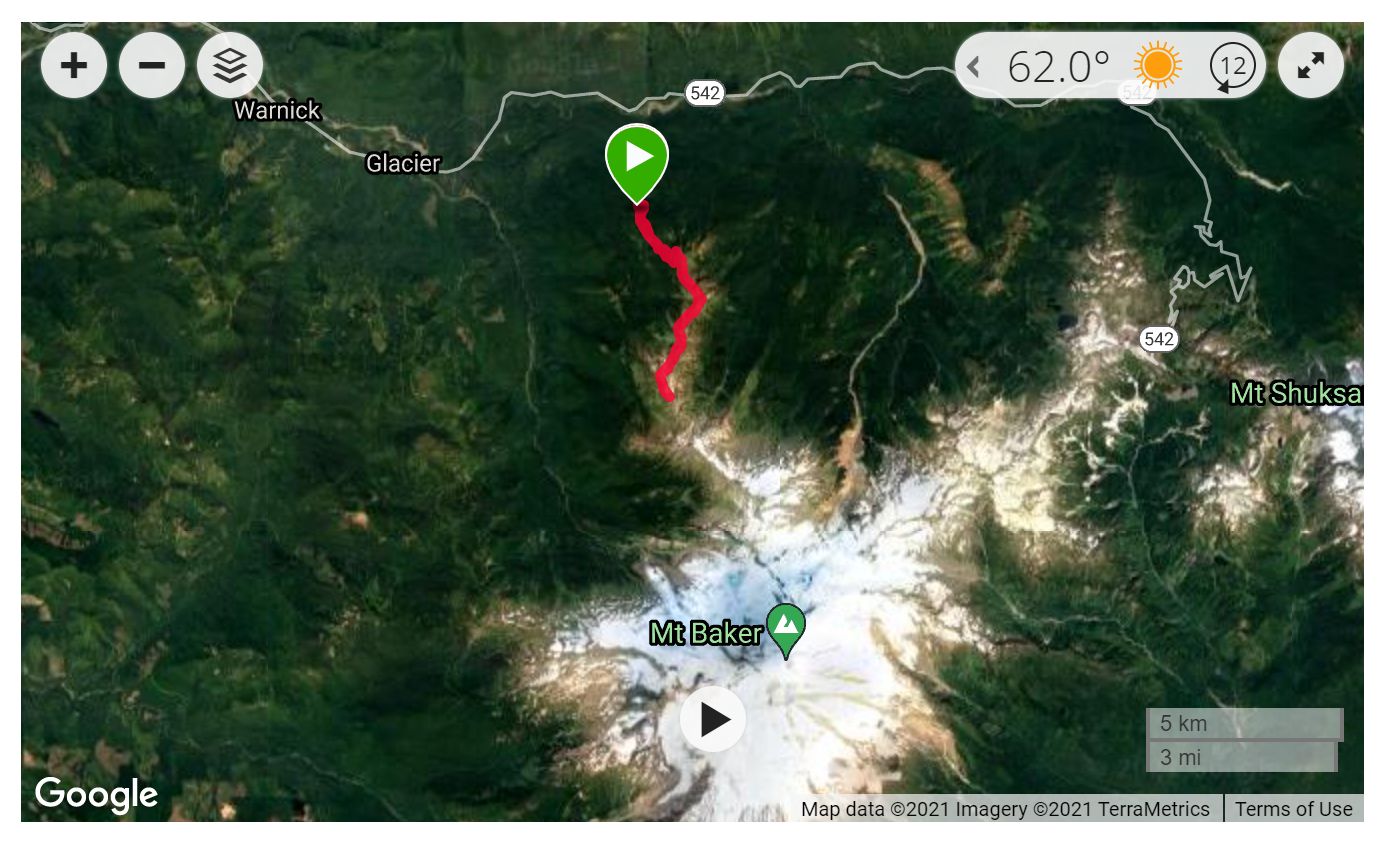