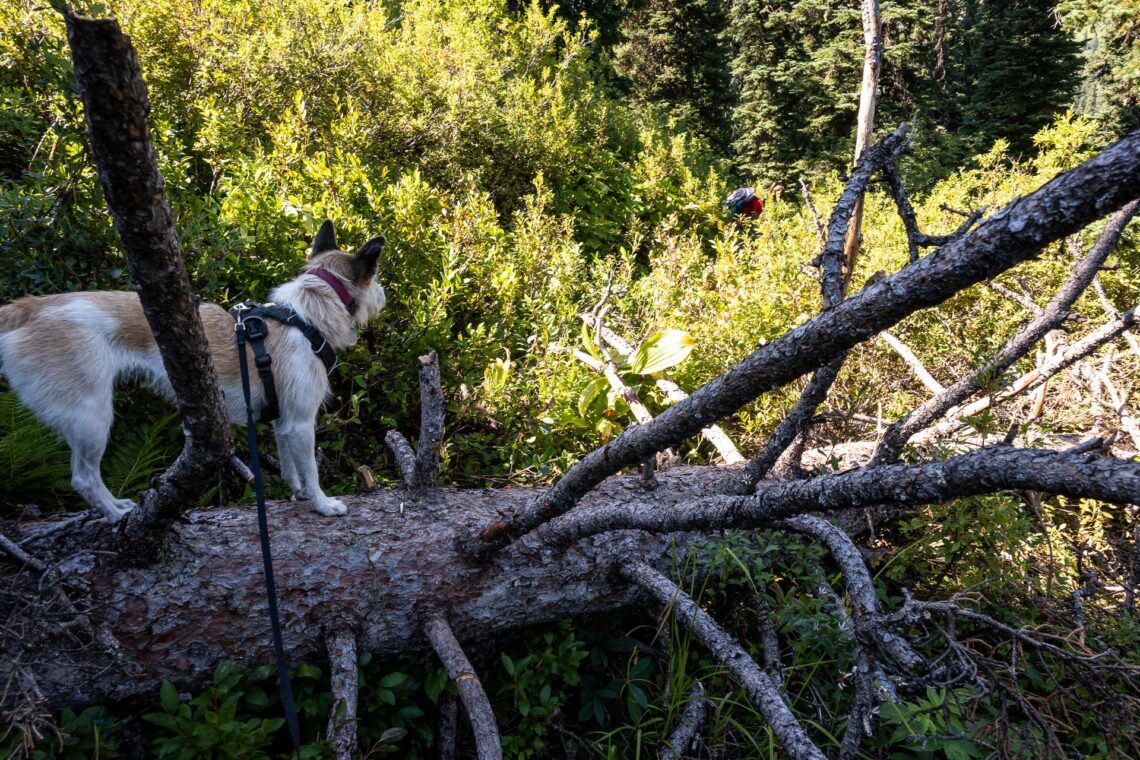 After hiking Mt. Aeneas a few weeks prior, we thought we’d head back to the Jewel Basin for a second outing. While the area is one of the most popular in the Flathead National Forest (typically a hard ‘no’ for us), the network of crisscrossing trails and gem-toned lakes begged us to make a return visit.

With the Camp Misery Trailhead being super crowded during the summer season, we thought we’d begin from the back side of the Jewel, a significantly less-trafficked starting point just off the western side of Hungry Horse Reservoir.

Using the most recent version of the trail map (posted at the Camp Misery Trailhead and online), I designed a seemingly ideal 20-mile loop that included a trip up to Tongue Mountain and that also skirted several of the basin’s beloved lakes. Little did I know that my careful planning would turn out to be a total disaster.

If I had to find one positive from this hike, it would be that I now have a de facto benchmark for the worst hike ever. This trek set a standard that, hopefully and quite likely, won’t be surpassed in my future. To be exceedingly clear before you start reading – do not attempt this route unless you are (1) beyond prepared for what you are getting into, and (2) a true masochist. 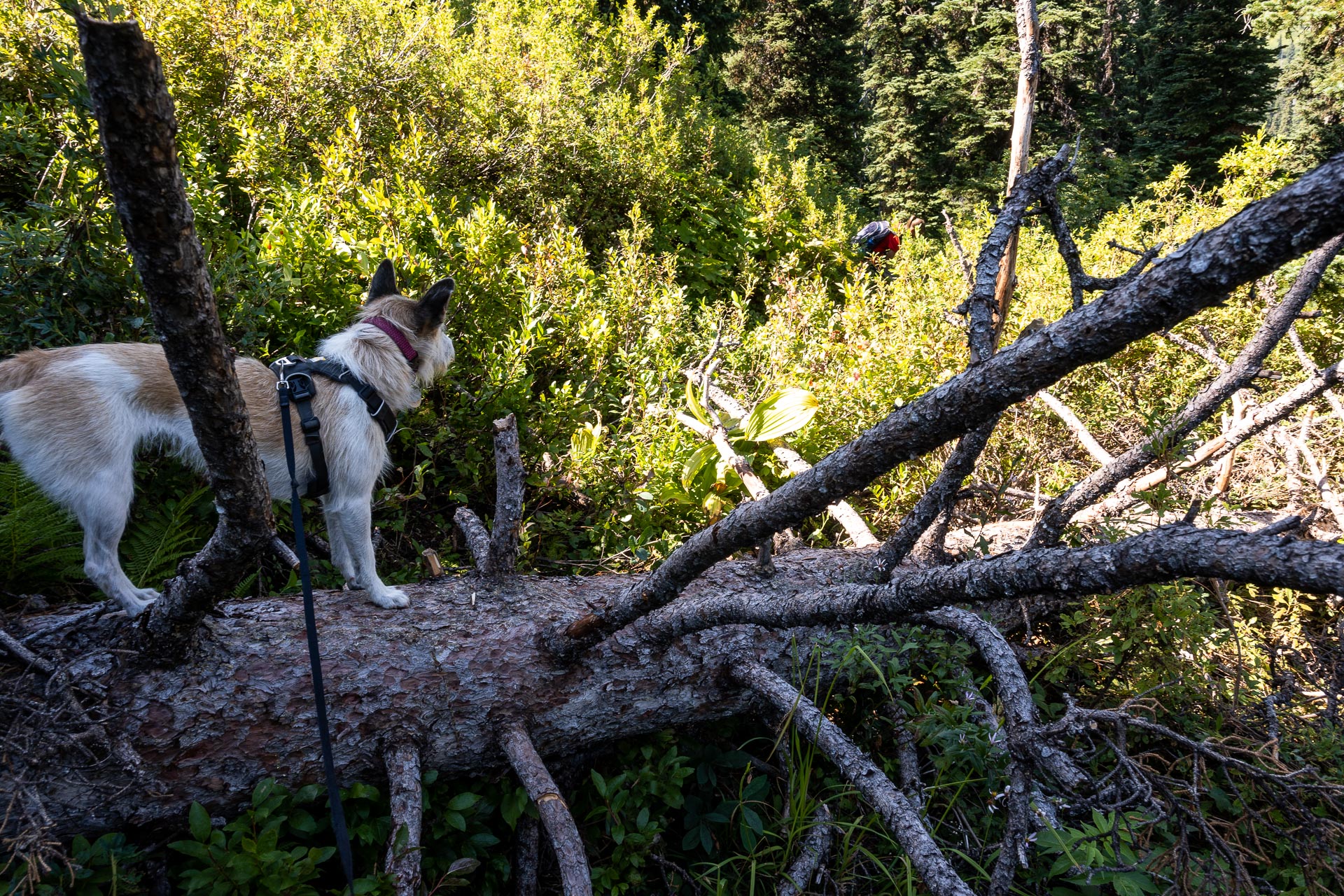 Our day on the trail began like any other. We arrived at the trailhead delighted to find only one other vehicle in the lot. The Clayton Creek Trail (#420) was quiet, meandering in and out of the woods as it gently climbed toward the lake. In several spots, the trail was a bit overgrown. I pushed through the foliage, but shrugged it off as being less meticulously maintained as it was the back side of the basin.

Without much effort, we made our way up and around the western side of Clayton Lake, a large sapphire pool in the middle of the forest. The trail here was just littered with huckleberry bushes, and we weren’t sure we were going to be able to move Sanchez beyond this point. Her brain shuts off about as much when she sees huckleberries to forage as it does when she sees any species of scurrying rodent. It’s really unbelievable.

While we tried to let her enjoy as many berries as possible, we did have to keep moving with 20 miles to cover. Luckily, as we climbed up toward Tongue Mountain (trail #55), the fruit-filled shrubs began to thin out. As we navigated the ridge, we looked back over Clayton Lake and out to Great Northern and the Flatheads to the east. Continuing just below the summit of Tongue Mountain, the views out into the Jewel Basin quickly opened up. To the south, we could see the summit of Mt. Aeneas – the highpoint of the Jewel – rising above a shimmering Blackfoot Lake. 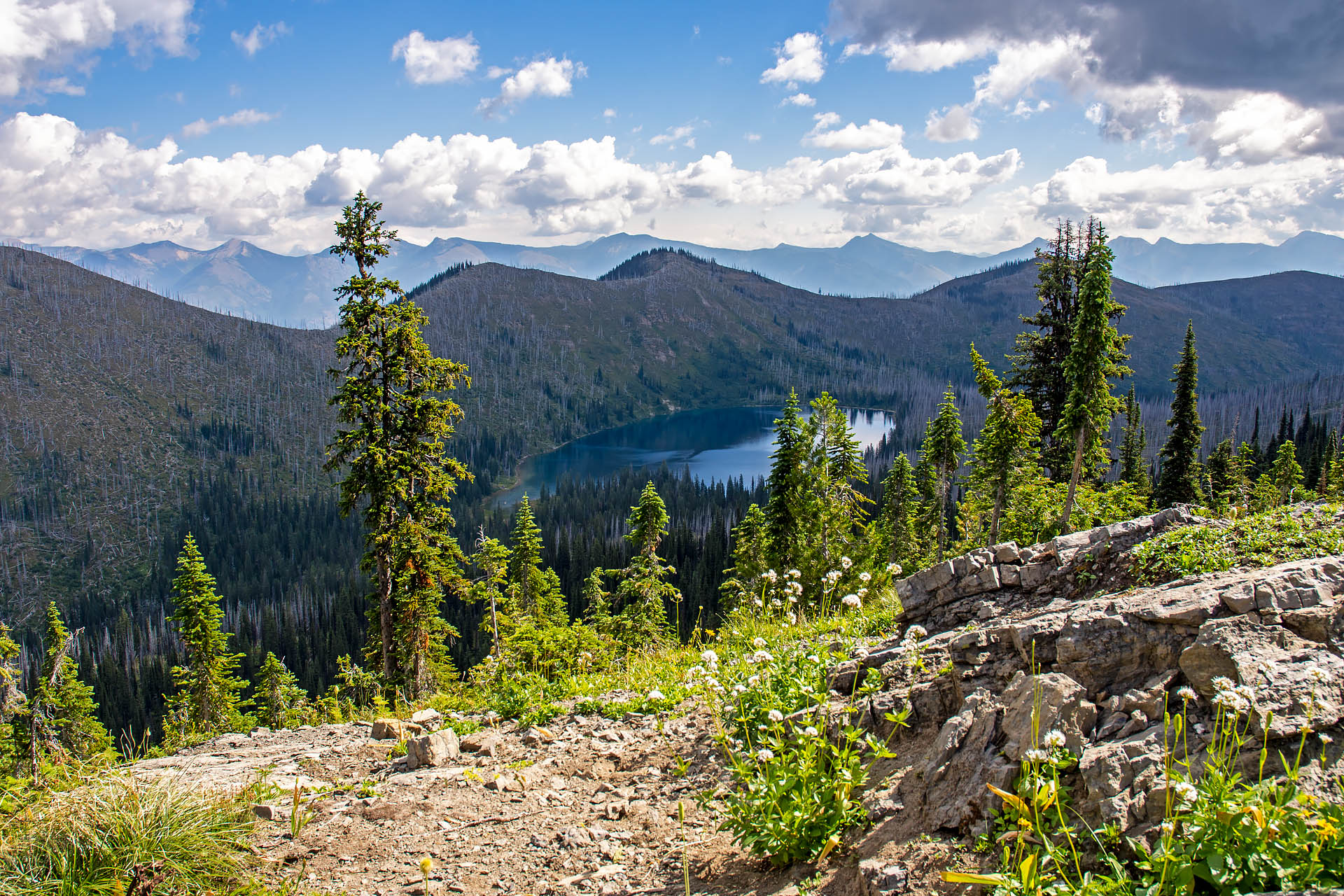 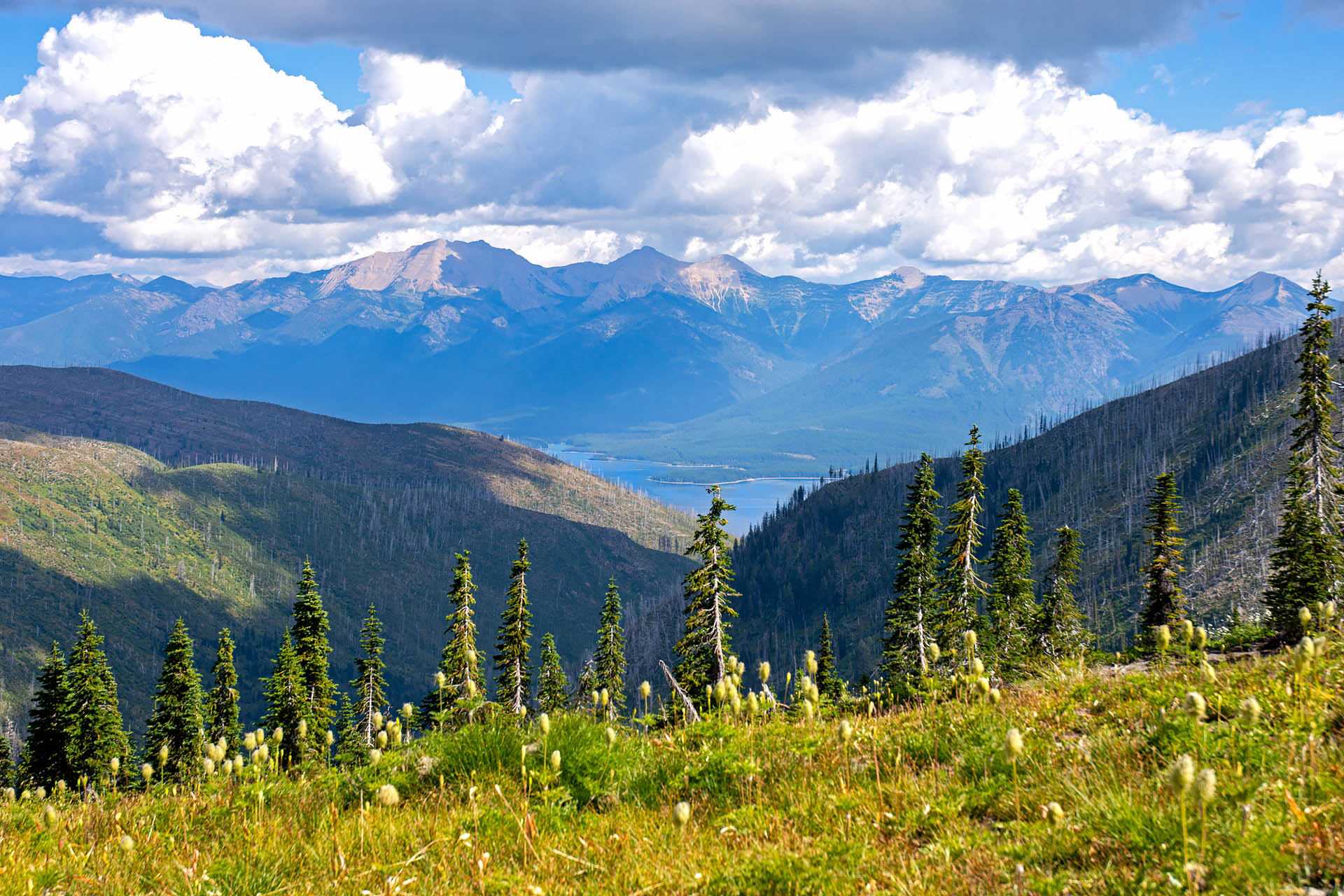 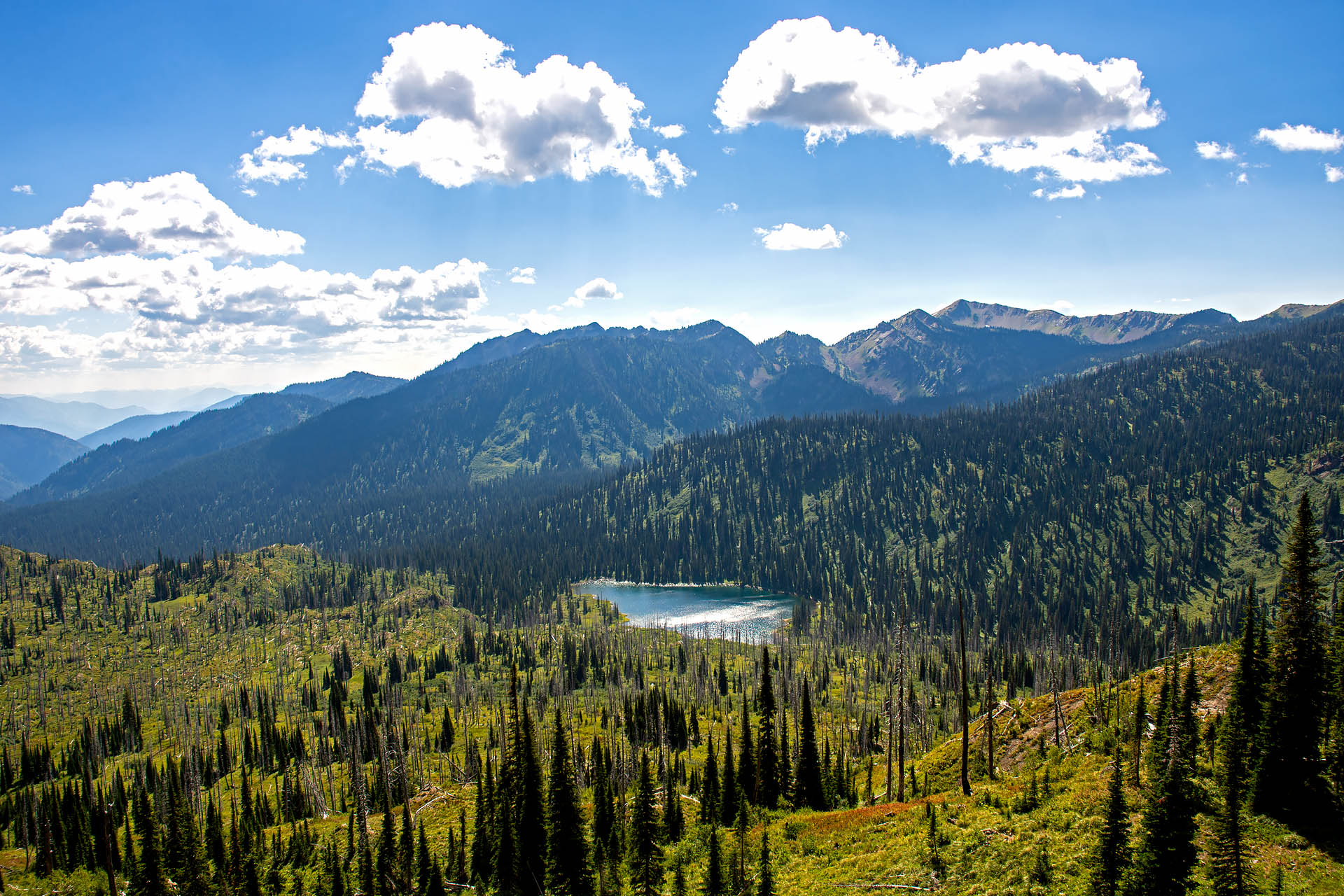 Having covered just over six miles, we made a quick stop for lunch and for Sanchez to enjoy her special ‘summit snack’ – although, technically, we were a couple hundred feet from the mountain’s highpoint. From here, we descended down into the valley, eager to check out the handful of lakes along the trail. 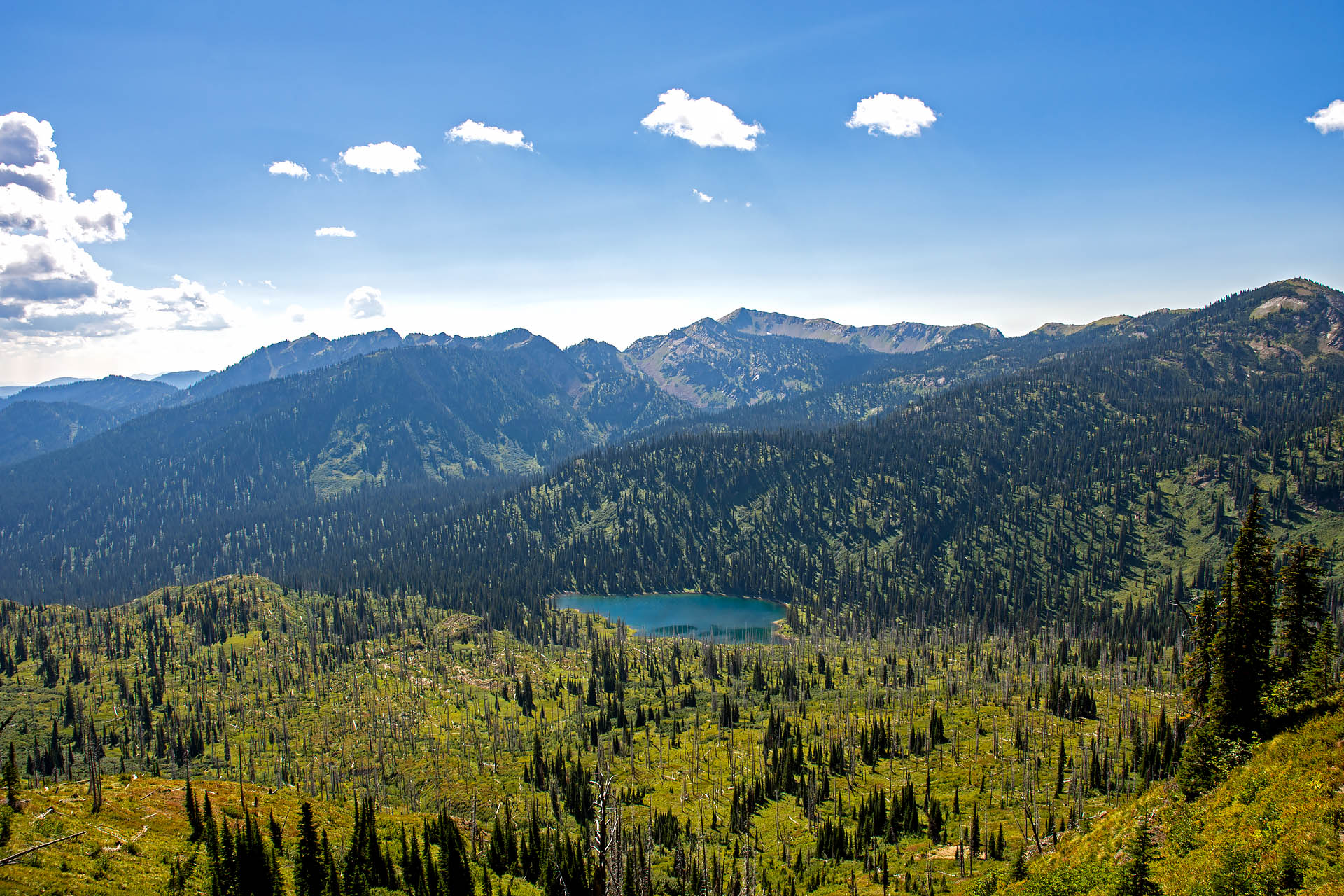 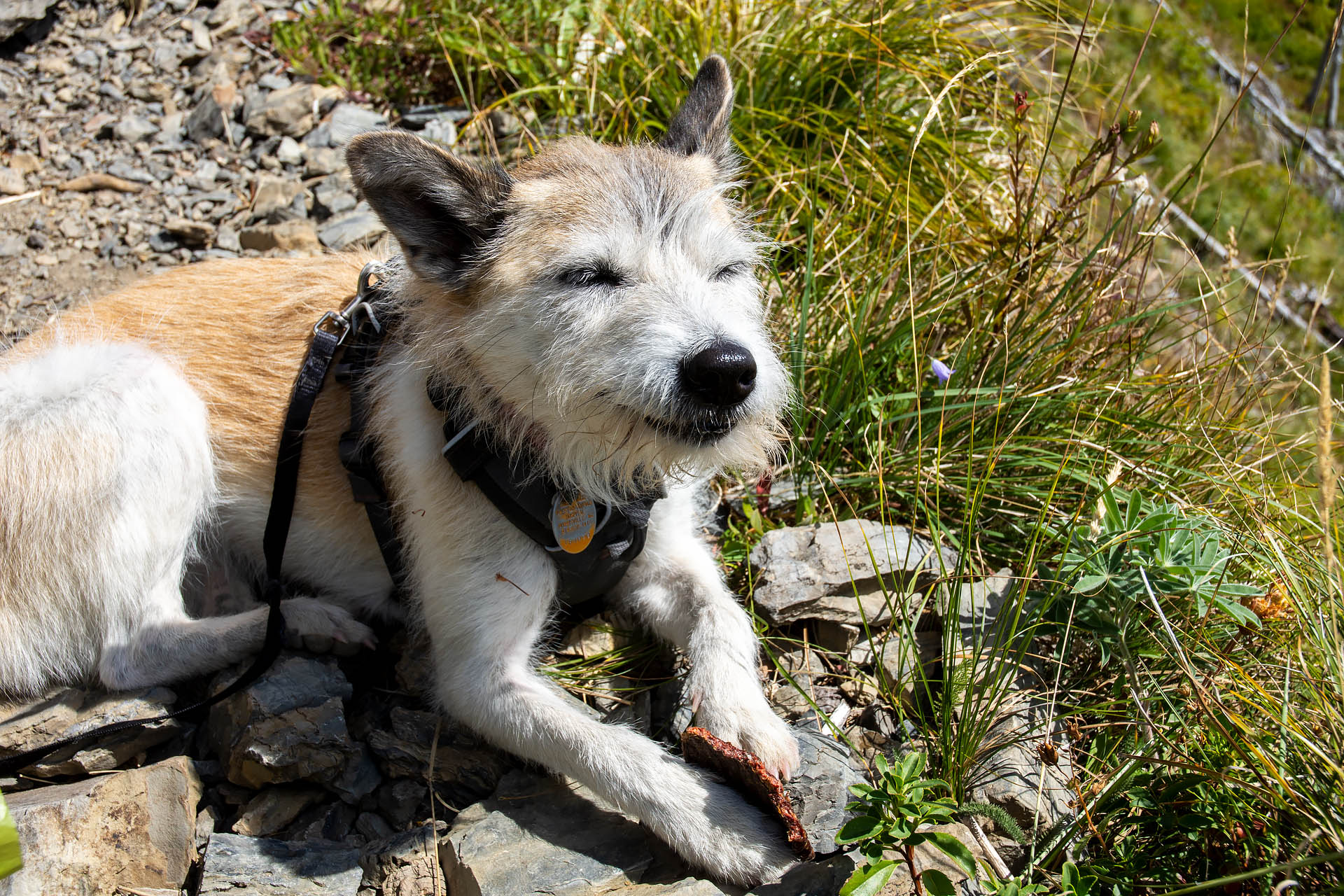 As we picked up trail #719, crossing through the heart of the Jewel Basin, we expected we’d begin to see other hikers. We never saw another soul. As we continued on, the trail became increasingly overgrown. We started to get annoyed, but again tried to shrug it off, figuring there must have been a few spots where trail maintenance had been slowed or missed due to the ongoing pandemic. Along this section of trail, we passed by the shores of Blackfoot Lake and the smaller Jewel Lakes, though we didn’t really stop to enjoy them. They were surprisingly underwhelming compared to many other alpine lakes we’d visited, and at just under halfway through the hike, we figured we’d better just keep plowing through the ever-increasing overgrowth that was now slowing our pace significantly. Around mile 10, things turned really ugly… 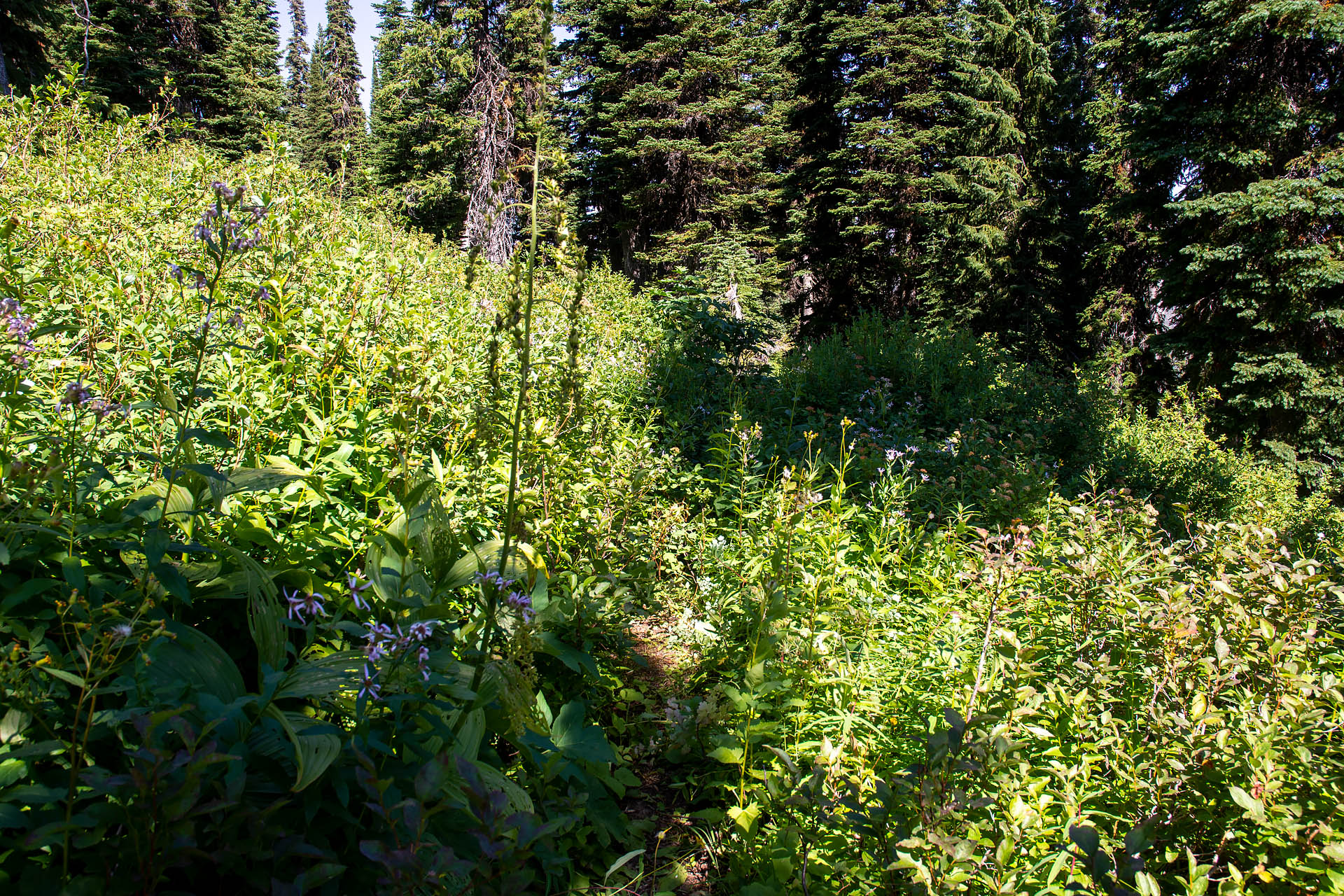 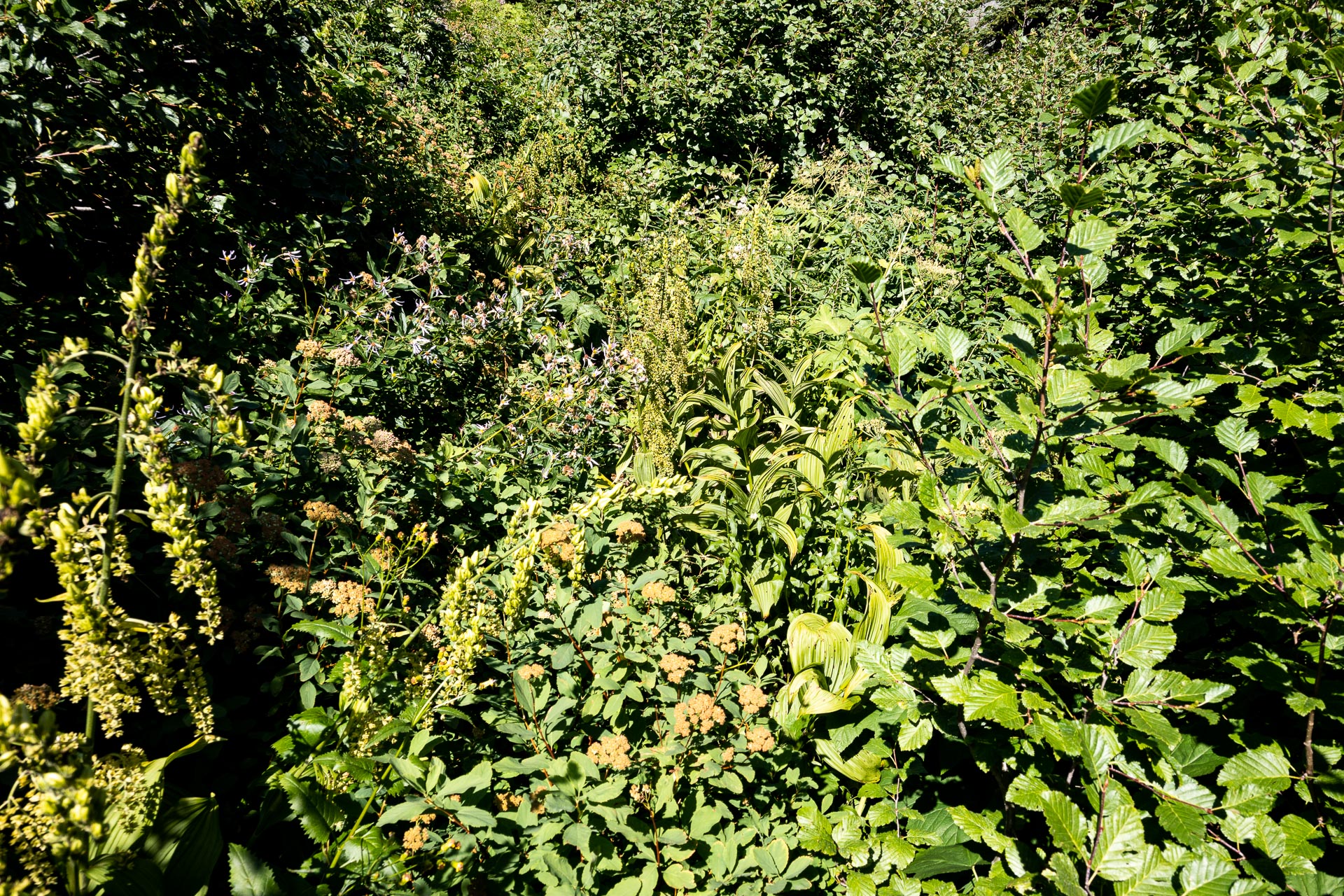 Once we passed the lakes, our frustration grew drastically. With every step we took, the vegetation became more and more dense, and the trail less and less discernible. It quickly got to the point where we were habitually losing the trail entirely. Being around halfway through, we weren’t sure what to do. Go back out the way we came, going back up the ridge? Keep going and hope the trail improved? We decided to just push on, for some reason holding onto some glimmer of optimism that things would get better. They did not.

For nearly ELEVEN MILES of the hike we battled overgrowth that ranged from moderate inconvenience to major obstacle. We bushwhacked through the most unbelievable amount of vegetation I’d ever seen. Along the worst five- to seven-mile section, we encountered many dozens of blowdowns, probably approaching or exceeding the triple-digit mark. Most were huge, requiring us to either do some serious clambering, or crawl underneath while trying to avoid the razor-like remnants of broken branches. We lost the trail probably every 100 feet or so, including at nearly every blowdown. We were absolutely miserable. Thank goodness Sanchez is super athletic, because I have to think a lot of dogs would have struggled with the size of some of those trees.

Presumably, the trail(s) had not been maintained for years. This was not a single season of growth, and many of those trees had been down for a considerable amount of time. As we traipsed through foliage, swearing and scraped, we took a couple shots of the worst seven miles (from the Jewel Lakes back to Clayton Lake). Honestly, I wish we’d documented more but we were way too frustrated to keep pulling out the cameras. Can you spot the trail? 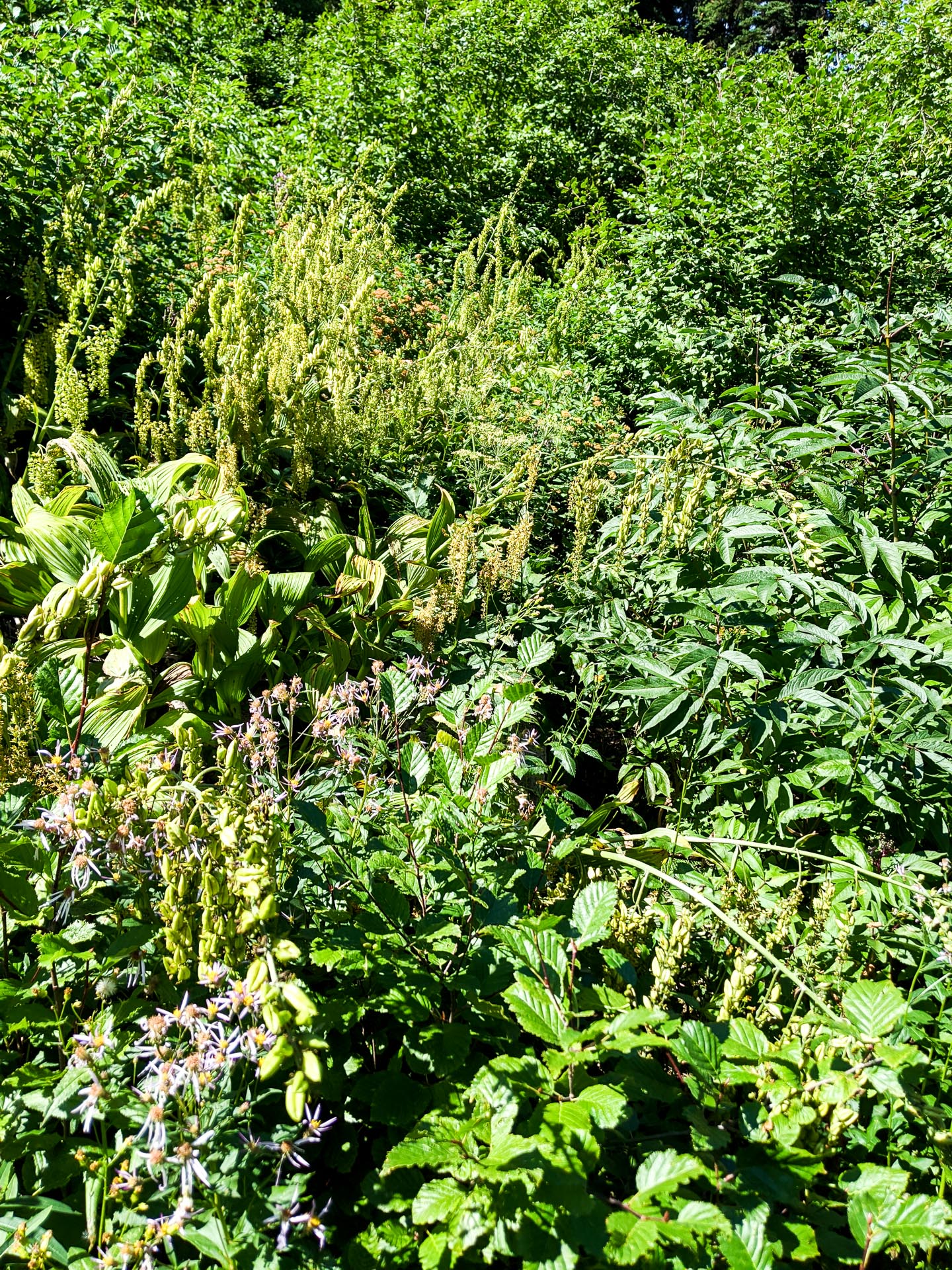 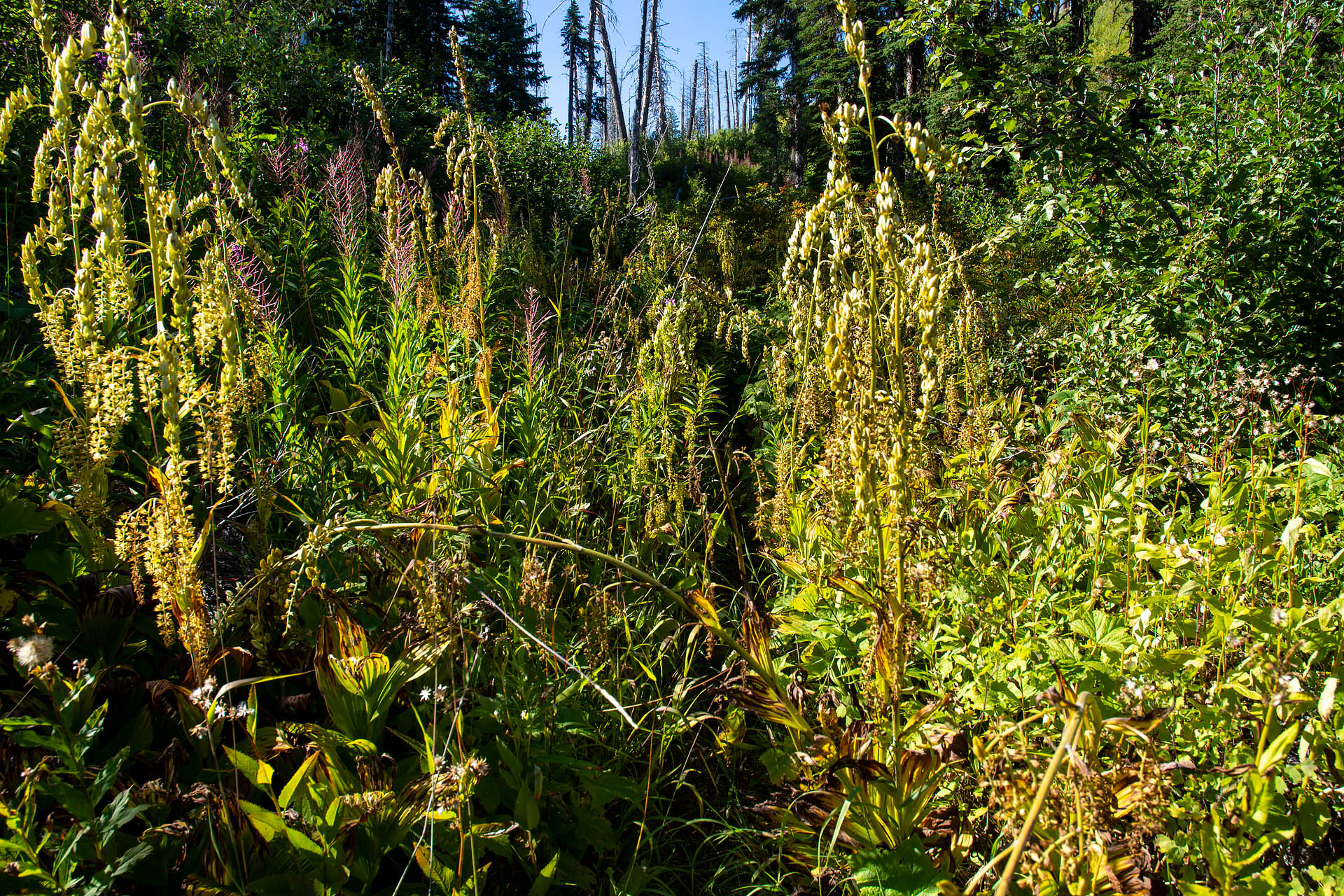 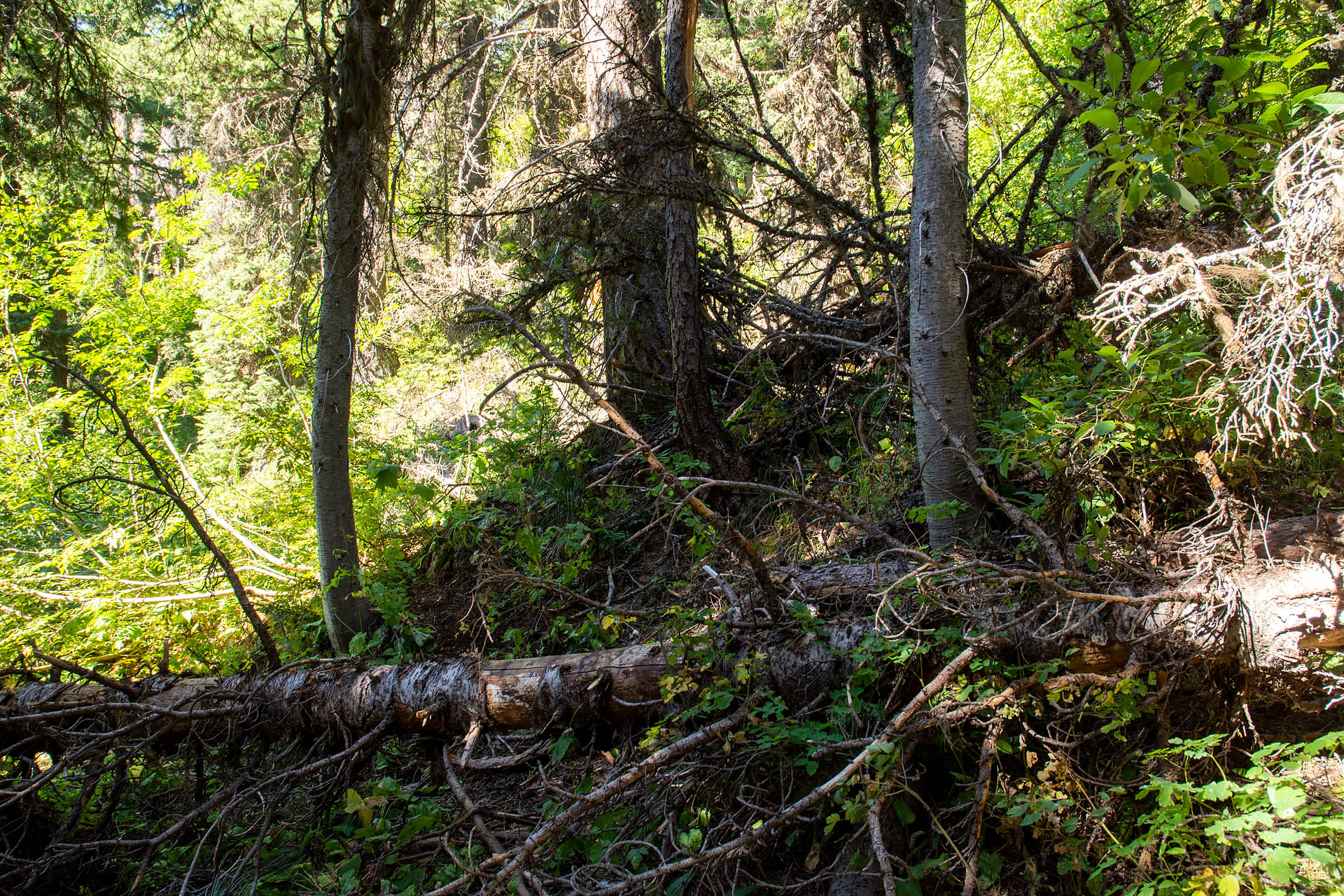 What left us truly flabbergasted after all of this, is that this is the Jewel Basin! It is undoubtedly one of the most heavily trafficked areas of the Flathead. At the Camp Misery Trailhead, there is an enormous, beautifully colored map highlighting all of the trails. Guidelines, advisories, notes, and informative tidbits are pinned onto the information board surrounding the ostensibly trustworthy map. Hikers of all hiking levels are entering the Jewel, looking to find a slice of solitude on a scenic hike. And while we always hike with map/GPS/compass, I am certain others do not. My question is this: If you can’t trust the friggin’ map, why is it there? 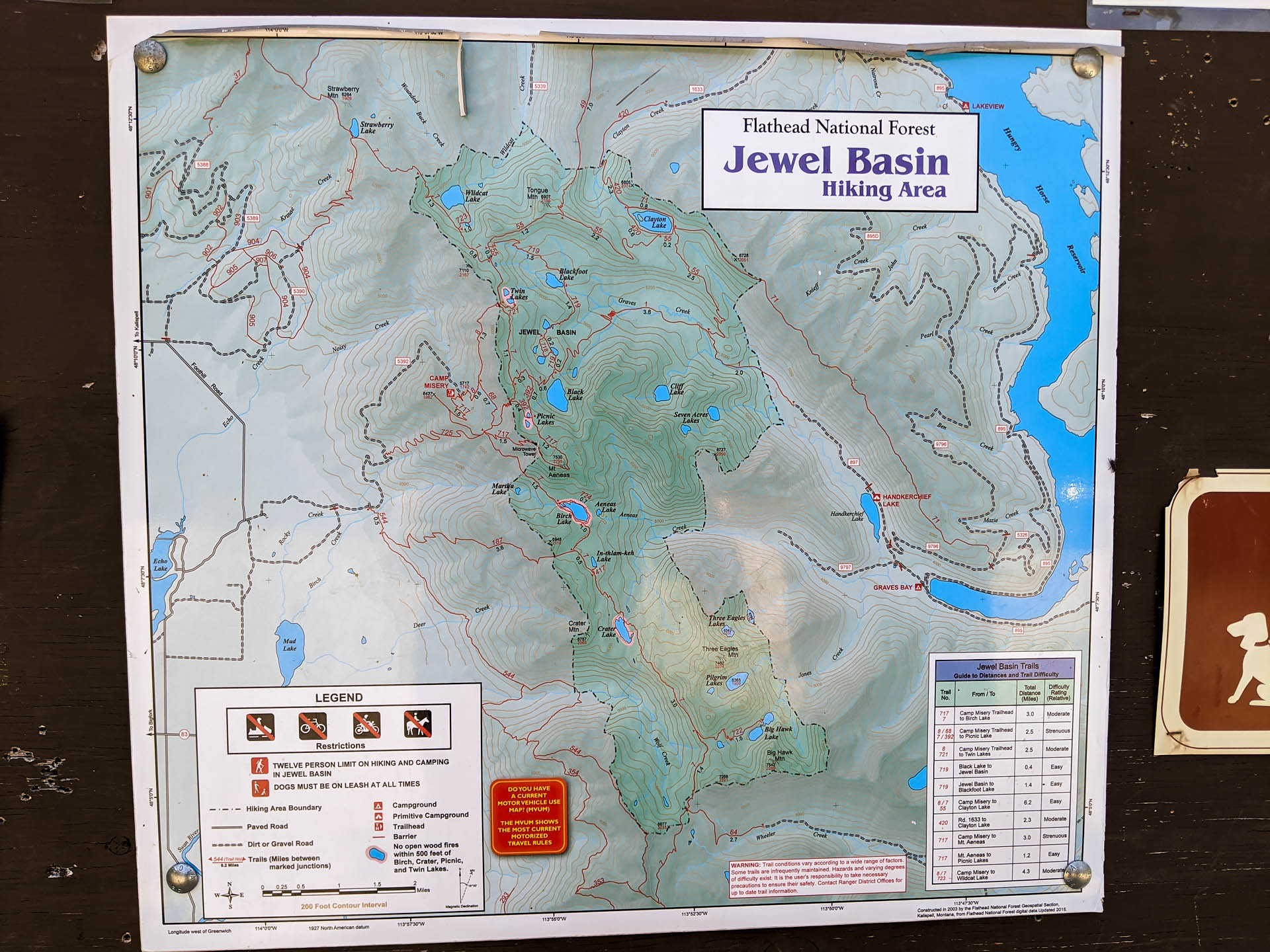 I think it’s grossly irresponsible of the Forest Service to not inform hikers that these trails are no longer maintained. It’s absolutely fine if they can’t keep up a trail, but seriously, let people know. We’ve hiked a lot. We know our typical pace. But on an unmaintained trail, it’s significantly slower. To give an idea of how slow the trail was, we did a hike in New Zealand that was 2 miles longer, with more vertical gain, and we finished 1.5 hours sooner.

And while we do hike with headlamps and extra supplies, no headlamp would have led us out of this trail if it had gotten dark; we could barely find trail in the daylight. To any park service: if you have a trail highlighted on a current trailhead map, please make sure it accurately reflects trail conditions for the safety of all hikers. And to anyone out there considering this hike: we’d definitely recommend a hard pass. 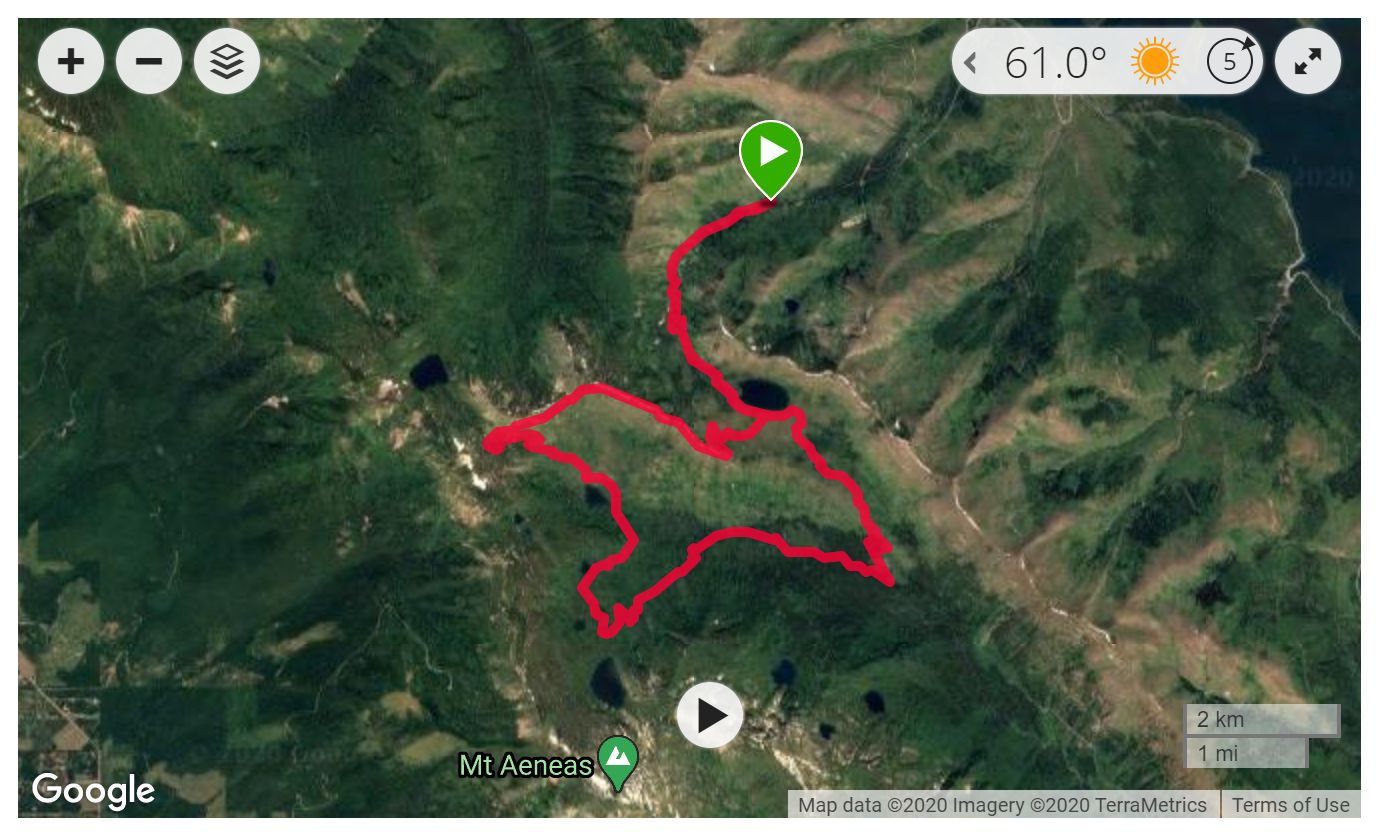 (1) While we absolutely do not recommend hiking this loop route, the Clayton Lake and Tongue Mountain portion of trail was satisfactory – not overly scenic, but quiet and with a couple views out into the Jewel and nearby Flathead Range. An out-and-back to Tongue Mountain would be around 10–11 miles with somewhere around 2,400’ of vertical gain. An out-and-back to Clayton Lake would be about 6 miles with around 1,500 vertical feet.